In Jan 2018 I finally had a successful descent of Morong Falls after 2 failed attempts in 2008 and 2010. Sadly Tom hadn’t been able to make that trip so I was keen to do it again so he could come along. I optimistically put it on the SBW Program for him…. Only to find he was still injured 🙁

I’d had a lot of interest in the trip, and a waiting list. But was the weather going to come to the party? I spent the weeks leading in studying the Kowmung River levels. I knew that for our successful trip last year the Cedar Creek level had been around 0.25. I had been told that up to about 0.35 was still fun and up to 0.4 was doable… it had taken several weeks for the level to get down to 0.36 a few days out from the trip. Great! Except then the days leading up had storms forecast. Shooters Hill had 28mm on Thursday but it didn’t seem to impact the river levels. (NB. Cedar Ford is >45km downstream of Morong Deep so not a perfect indicator of conditions) 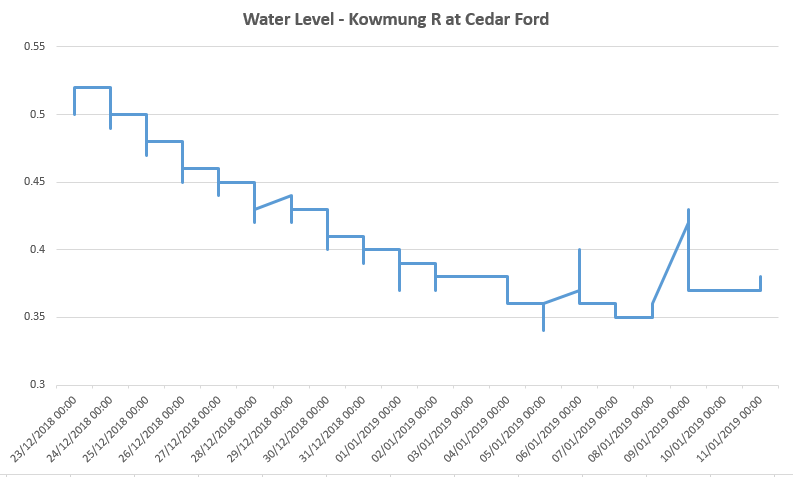 Water levels up to the Friday (11th) before the trip

Not dissimilar to my Colo River walk I lost participants as the week progressed. I gave everyone the options on Thursday – should we proceed knowing that we might have to bail out? I got positive responses so we were on. Water levels were holding in the 0.35-0.40 range, forecast for Saturday was great. Fingers-crossed!

It rained heavily the whole way to Glenbrook on Friday evening. This wasn’t really consistent with the forecast. While picking up Clive & Will in Glenbrook I have a look at the radar – there’s widespread rain everywhere. Hmm. The rain continues most of the way up the mountains. We get fuel in Mt Vic and I have another look at the river levels – still sitting at 0.38, the rain gauges in the areas surrounding the Kowmung catchment haven’t had more than 10mm (compared to Goulburn and some parts of the main mountains getting >50mm that afternoon).

The rain starts pouring just as I’ve put my fly on the tent. I’m sitting in the tent, listening to the rain, looking at all the maps I’ve brought trying to come up with an alternative plan since Morong Deep is clearly out of the picture. And what am I going to do with shoeless Will?

Woken by what sounded like hundreds of kookaburras at 5am my thoughts click back to the alternatives.

I finally meet Nic, the 4th and final member of the party. Part of the reason the trip is on the program is because Nic suggested it – but under club rules as he is still a prospective member he can’t lead trips yet. We’ve been exchanging emails for weeks but we haven’t met before. “Great day to go and have a look” he says. “Oh” I think.

Somewhat later than planned Nic, Clive & I set off for the locked gate (“giving us time for the river to go down”). It’s a beautiful day. We get to Morong Creek “that’s quite a lot of water” says Nic. Indeed. Not so much we couldn’t cross so we cross and head down to the Kowmung. 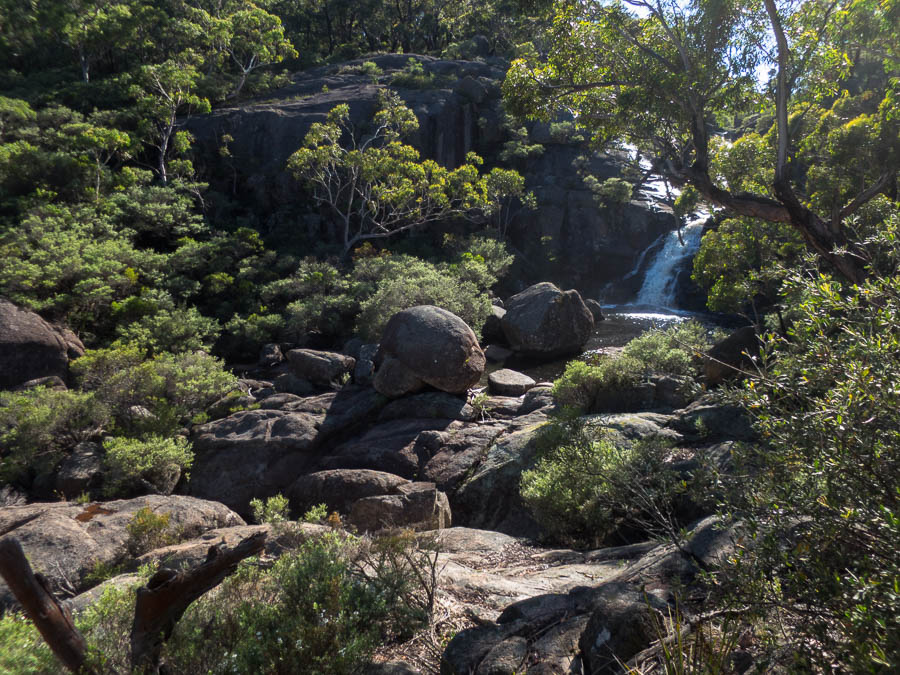 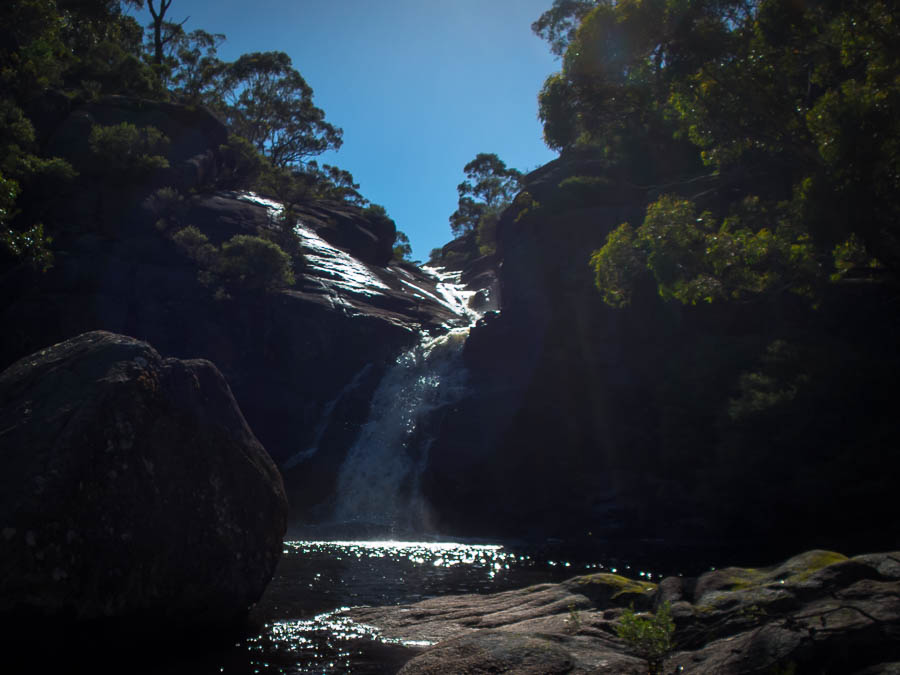 After a bit of faffing above bluffs we find our way down. A brown, frothy river meets us. Crossing looks a little challenging. If my mind hadn’t already been made up, it was made up then. We would be heading back out shortly. 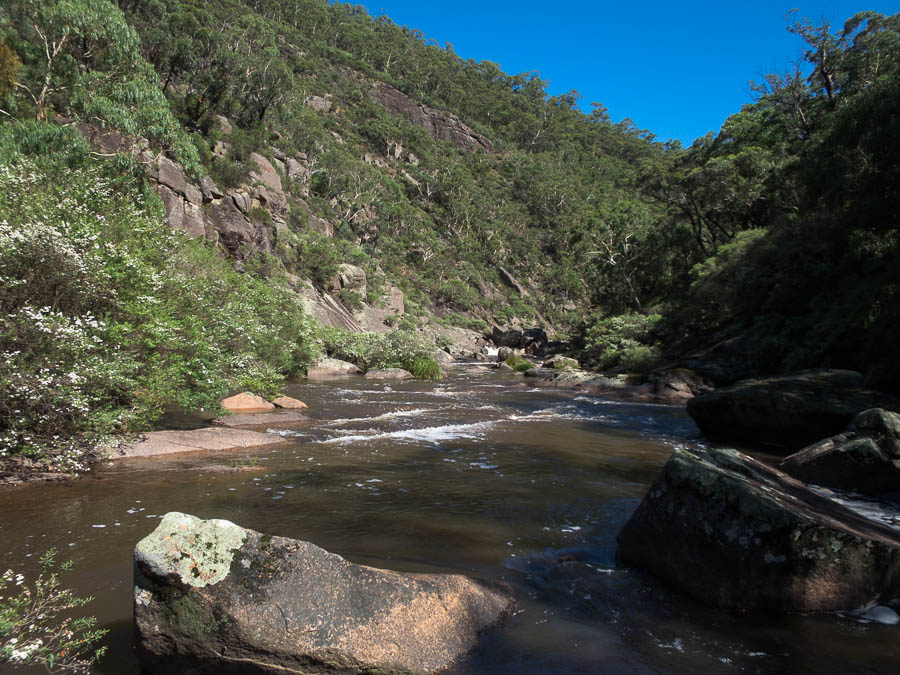 Our first view of the Kowmung looking downstream

We put a marker in place to see whether the river was rising or falling and had morning tea. Nic and I managed to get across the river dry and went for a bit of a scout. After half an hour I don’t think the marker had moved, though Nic more optimistic than me thought it might have dropped very slightly. 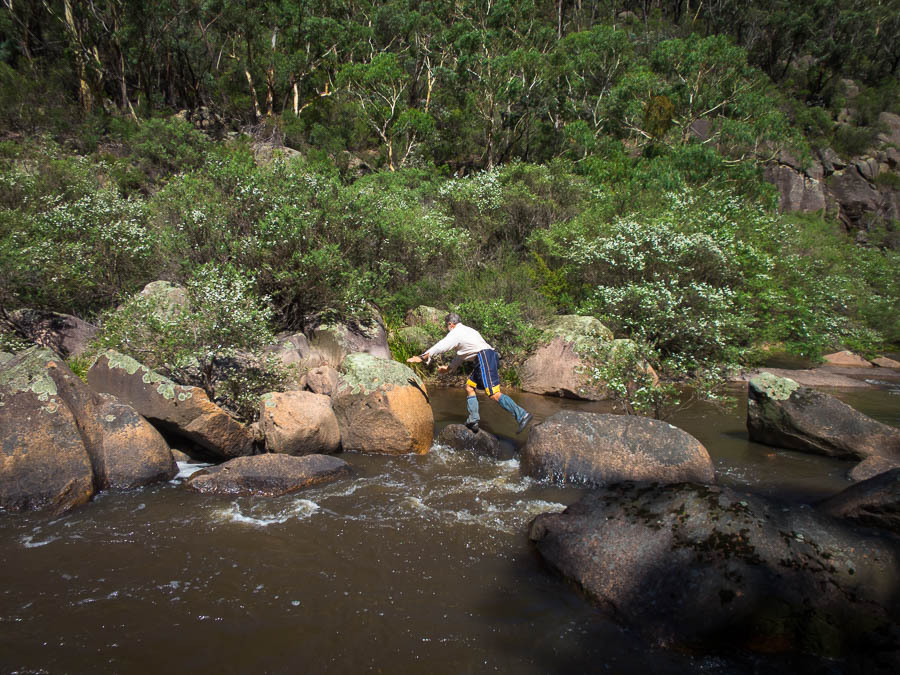 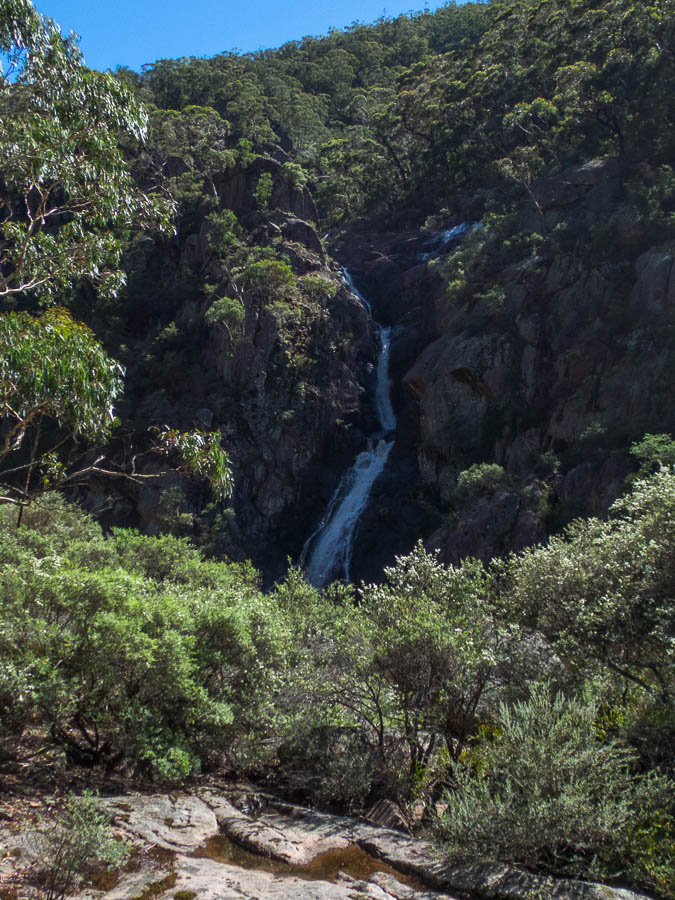 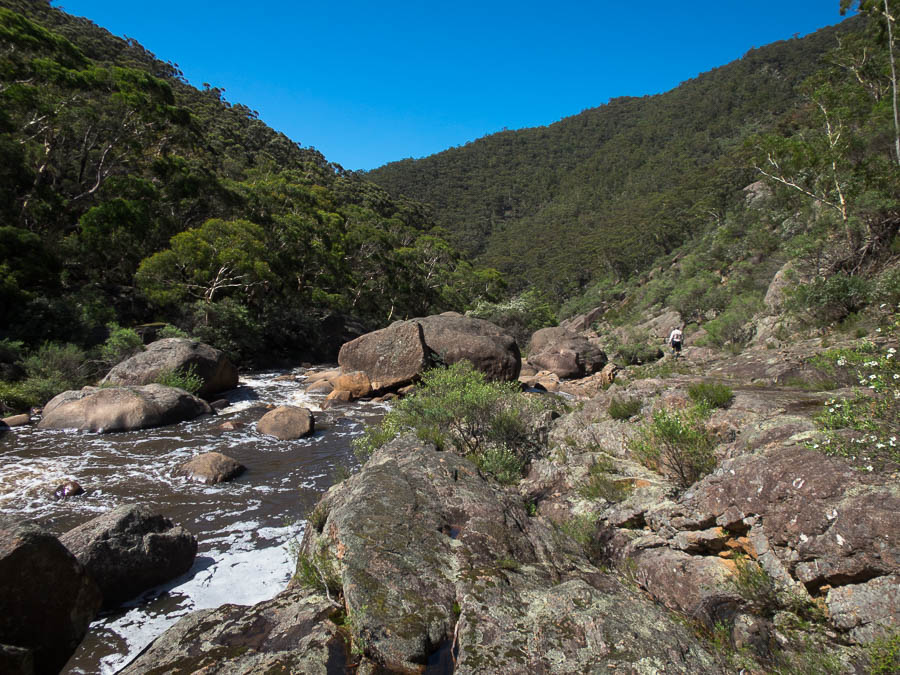 Nic exploring downstream on the true-right. We exit up the spur on the left. (for comparison see this photo from last year – the big boulders are the same, but the river is barely visible)

For something to do we decided to cross the river, make our way downstream a few hundred metres, cross back and head up the next spur. That was relatively straight-forward though there were very few safe places to cross the river.

My camera also decided it’d had enough, so that’s the end of my photos for the day. 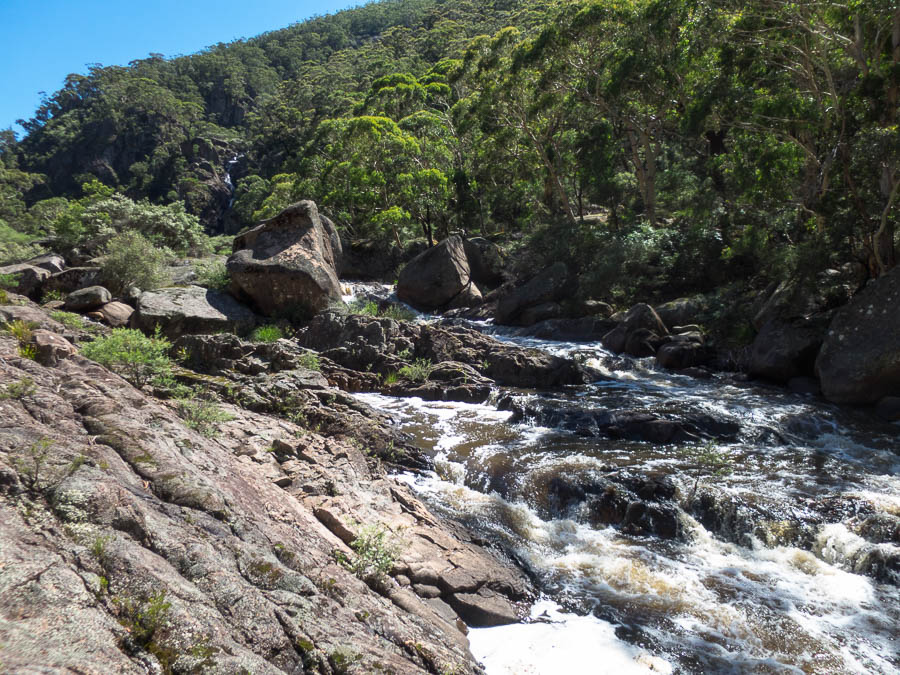 It was a fun, if humid and hot climb up the spur through a few granite outcrops. We had lunch at a lovely cliff-edge spot at the top with good views. It was the perfect weather for doing the trip – just the wrong water levels.

After lunch we headed back to the cars, and were a little surprised to find my car parked there as well as Nic’s. We’d left my car with shoeless Will so he could at least go somewhere from the campground. Shortly after he arrived back with a family he’d met – they’d been swimming at Morong Falls so we must have only just missed them after lunch.

I had a nap, then we prevaricated about what do the next day. There wasn’t a lot of enthusiasm for any of the options on the table. We went for a swim in the pool above Kalang Falls which was wonderful and refreshing. We then came to the democratic decision of going home that night. 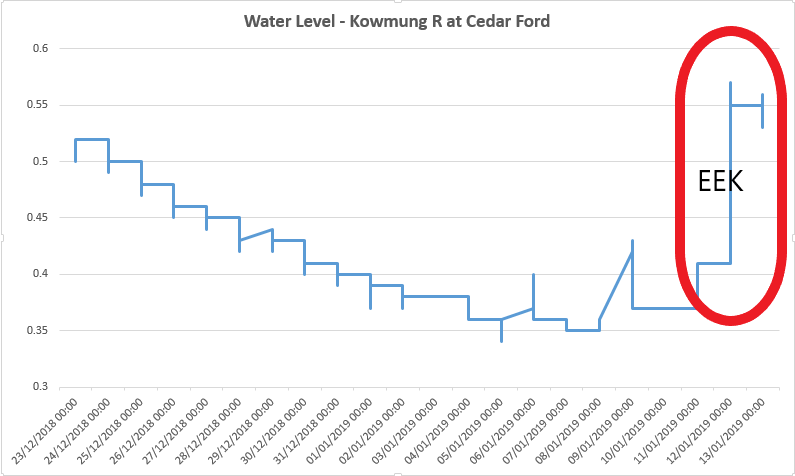 Water levels including Sat/Sun! Peaked at 0.57 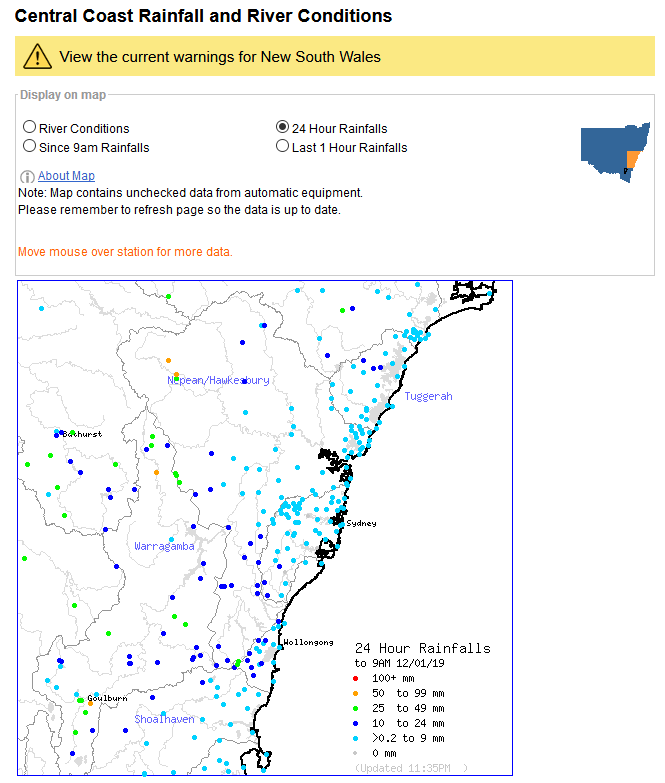 Rainfall in the 24 hours before the trip