It was the case of the shrinking trip. A week before we had 7, by Tuesday it was 6, Thursday down to 5. 5 minutes before we were meant to meet in Windsor on Saturday morning we were down to 4 when I got an sms from Alex informing me he had just woken up… and he wasn’t parked just round the corner. Given the weather forecast (hot with potential severe storms) I wasn’t too unhappy with the small group. Since Tom was in doubt to complete the trip (after all we were due another person to pull out…) we decided to take 2 cars in case Tom needed to bail out early.

I was loaded up with much of our shared gear as well as my packraft which made navigating the off-track sections awkward. As there had been storms the previous two days the rocks in the creek were wet and walking on them was akin to walking on ice. The slippery conditions made for slow progress in the creek.

Treacherous conditions in the creek

We had various forays up onto the sides to get around some of the larger boulders, ultimately ending up above the junction of our first creek and the main one. Sweat was pouring off us with the humid conditions so after a drink and some scouting we backtracked a bit and found a way back into the creek. 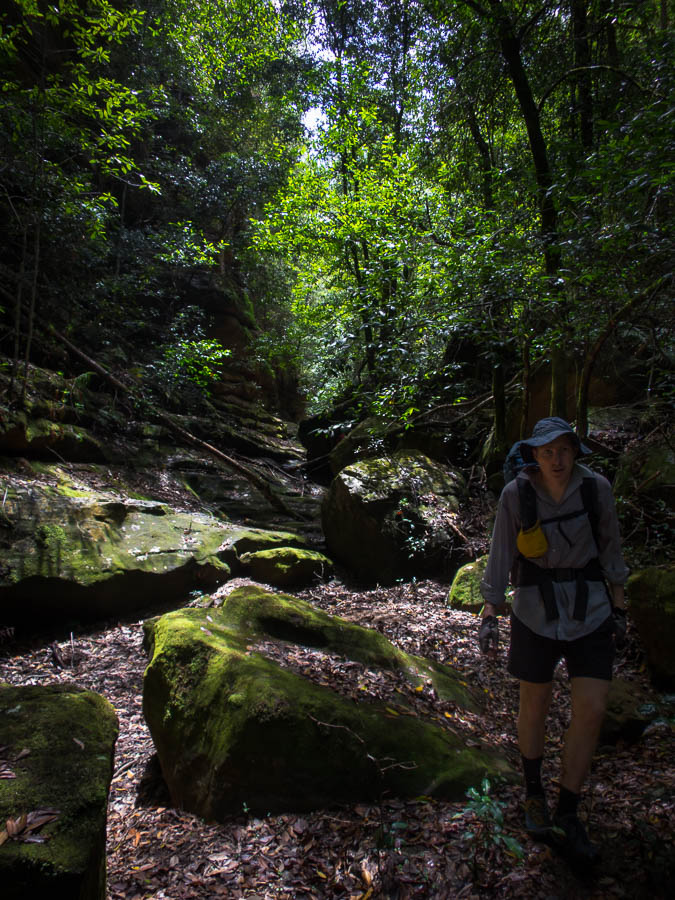 I managed to pick up a couple of footpads on the true right which eventually brought us down to the Colo River around 12:30pm. 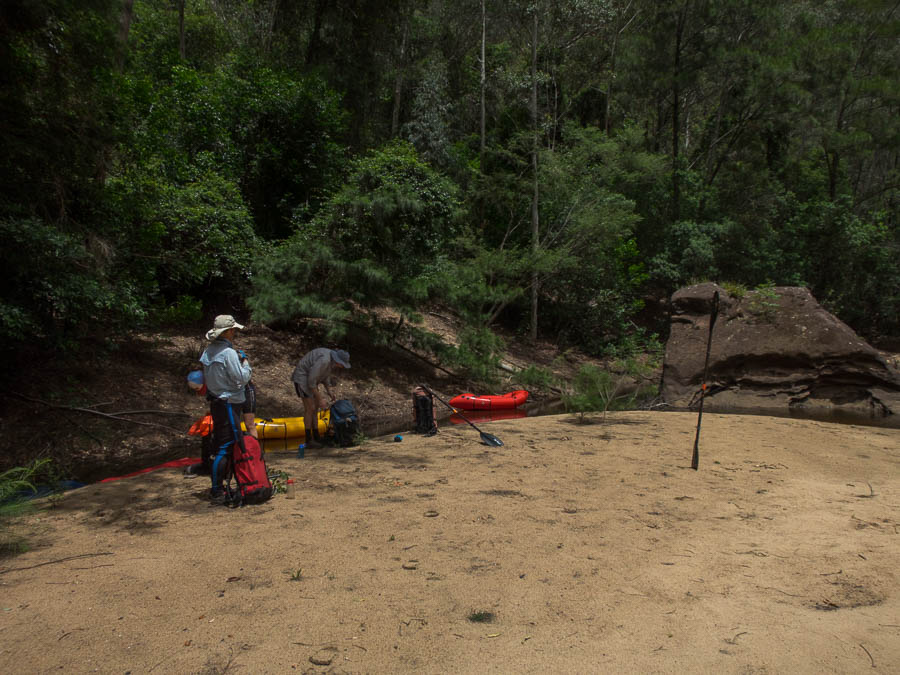 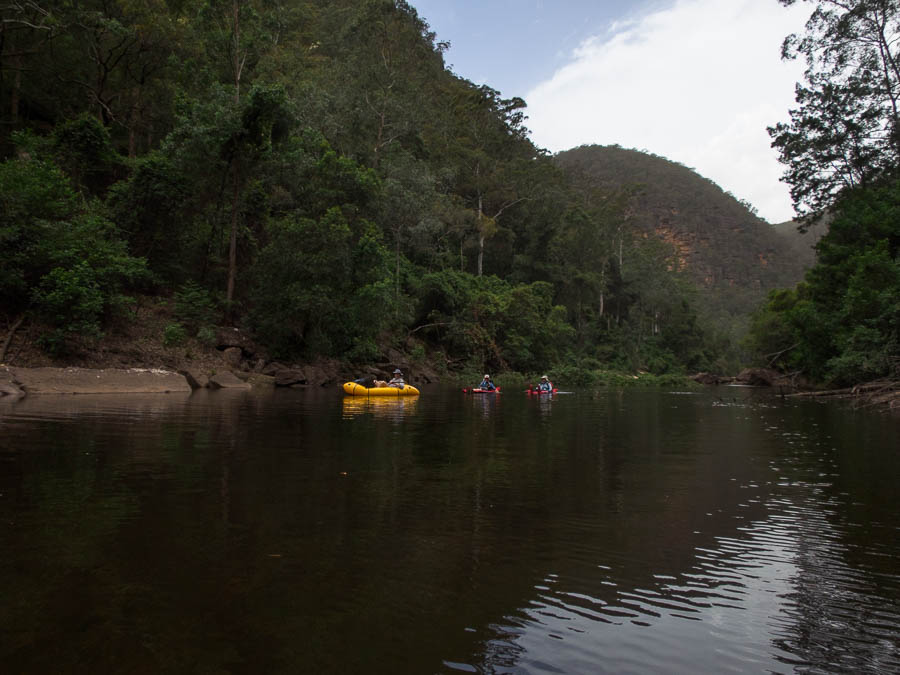 The crew on the water early on

After lunch and inflating the flotilla launched. Bill was quick to get some fishing in – obviously having practised casting from a lilo a few times before. It wasn’t long before he had a reasonable sized bass but decided we had a bit too far to go in the heat to keep it for dinner. 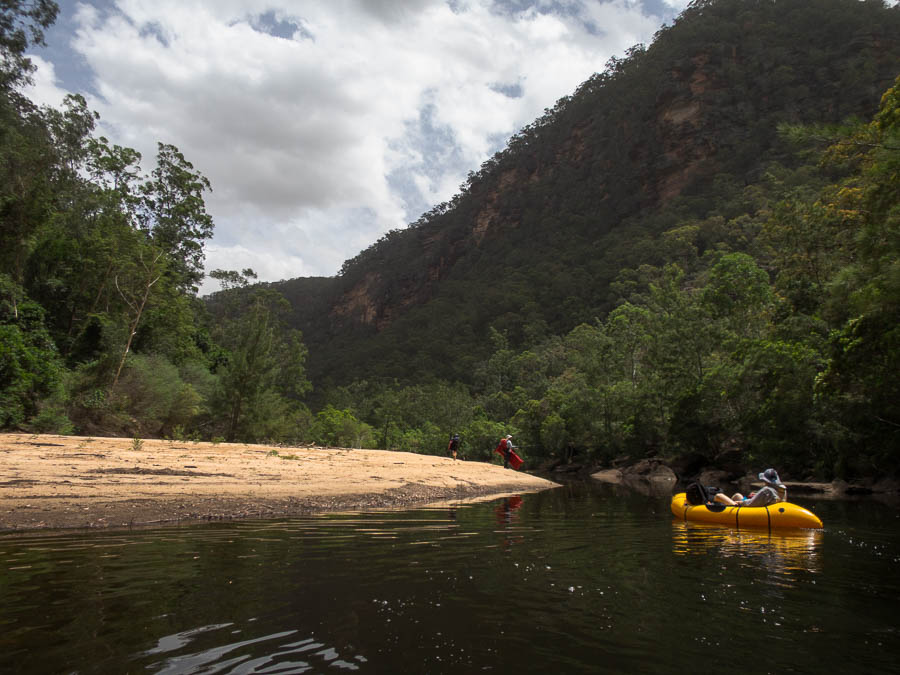 Bill fishing from the shore

We were in no hurry to get down to Canoe Creek so we drifted where we could, enjoying the flow particularly in the earlier sections. 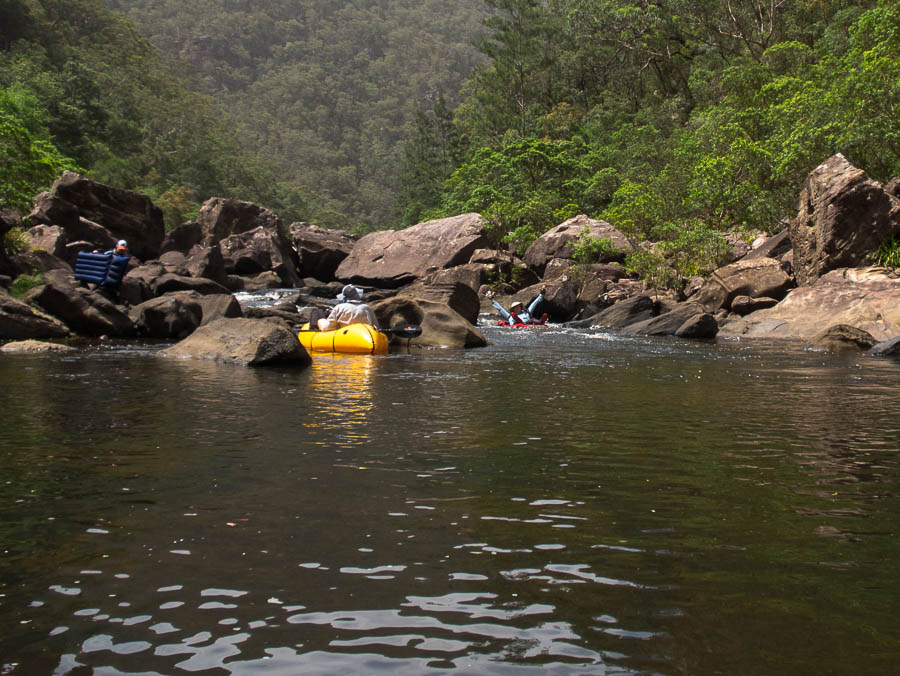 Bill of the king of the lilo!

The lilos probably had the better run through most of the rapids – there seemed to be lots of lilo sized gaps and not so many pack-raft sized! 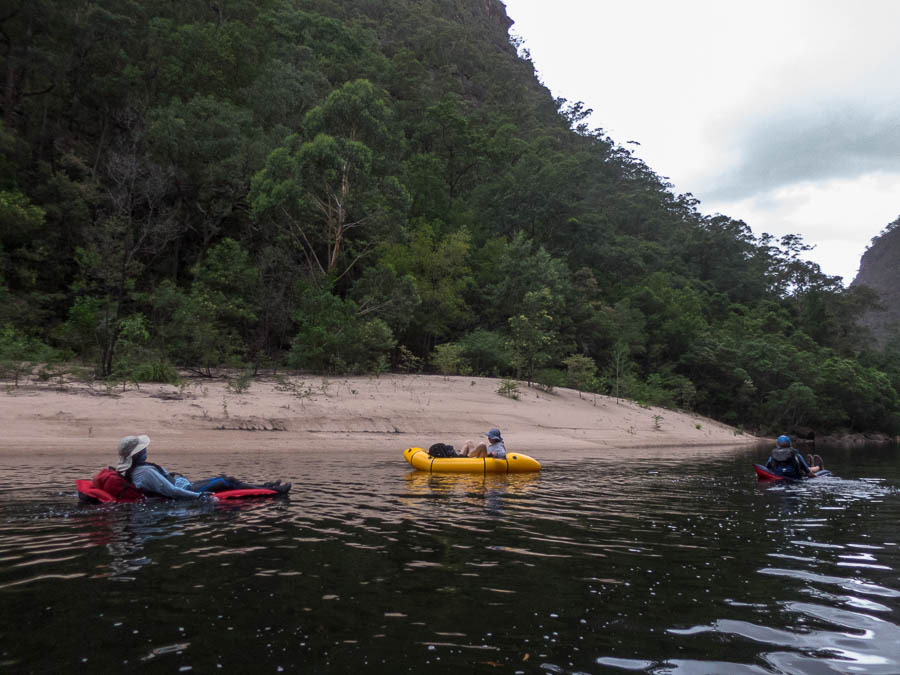 The promised storms developed and hit us briefly. After about 5 minutes of heavy rain it cleared to a lovely afternoon, and we were feeling pretty happy with our decision to be out there. 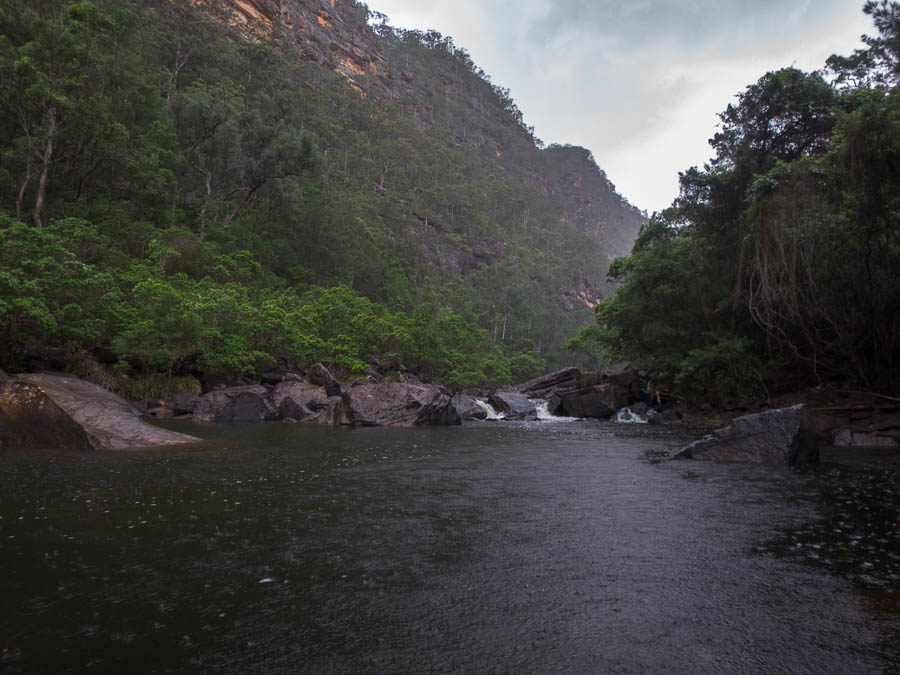 The storm about to hit us hard

Talk turned to who would be at Canoe Creek – we were meant to be meeting another SBW group, but it was unclear from a series of text messages that morning whether they were still coming. Alex had said he might catch up with us later in the day. My money was on no one being there, but second choice was just Emmanuelle, Vivien & Justine. 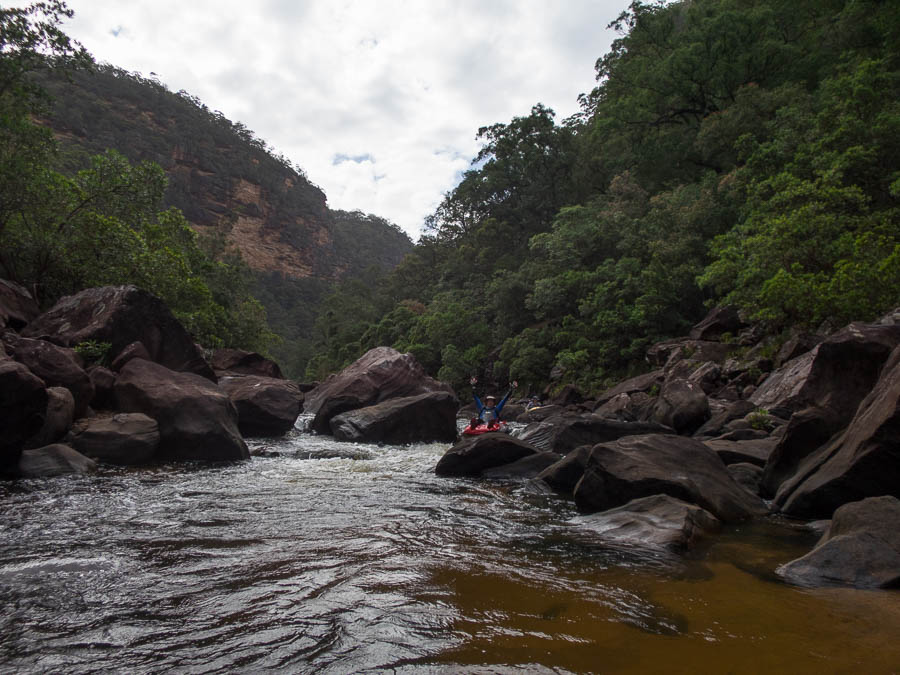 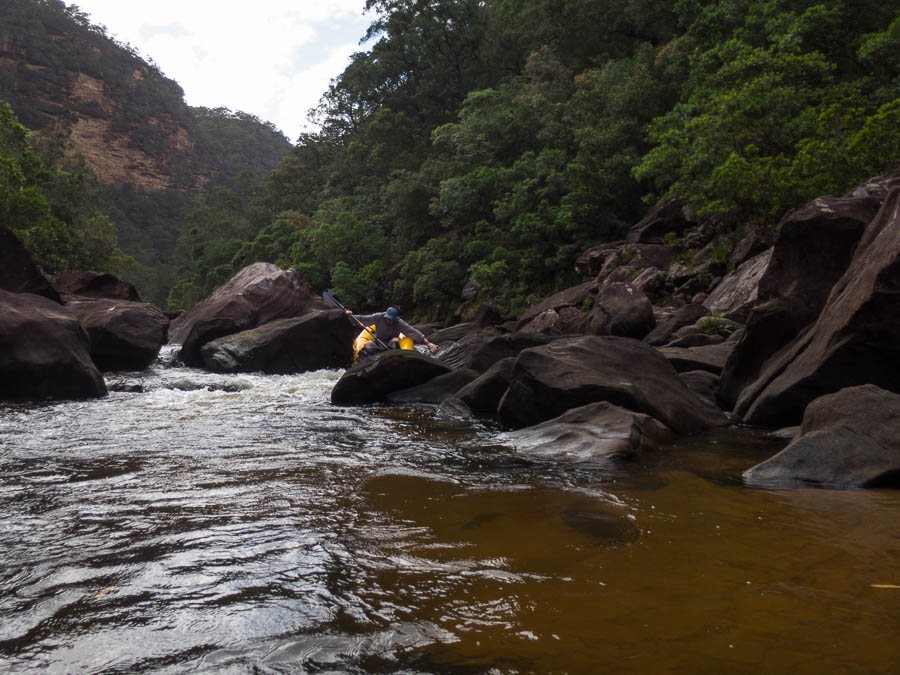 Not quite as smooth for the pack-raft!

The last section of the river as we approached the Canoe Creek junction seemed to take a while with the series of rapids growing longer and requiring more clambering over. Sadly Bill’s lilo decided it had enough at this point and popped. His fishing rod & reel not wanting to miss out also decided to malfunction (snap / fall off).

Eventually we came within sight of the corner and I could see Emmanuelle standing there waiting for us. After some good-natured castigation at our late arrival (51 minutes after happy hour!) we set-up for the night, then settled down to happy hour at the somewhat controversial time of 6:30pm. Vivien’s group had similar shrinking issues to mine having also gone from 7 to 4 (only Andrew had made it in addition with V, E & J).

We had moved on to dinner by the time a distinctive figure with his classic-felt bush hat appeared carrying a boogie board. Alex had indeed eventually caught up with us – after 7pm! We had a pleasant evening, but not around the campfire due to the ongoing park fire ban.

With only a short walk out the next day there was no designated get-up time and Tom & I managed to sleep through till 8:30am. The morning was whiled away with swimming, napping and general laziness. After a cooling swim we set off at 11am. I’d forgotten how steep the Canoe Creek track (Pass 13) was and with my heavy pack I needed a couple of boosts from behind to get up the steeper sections. 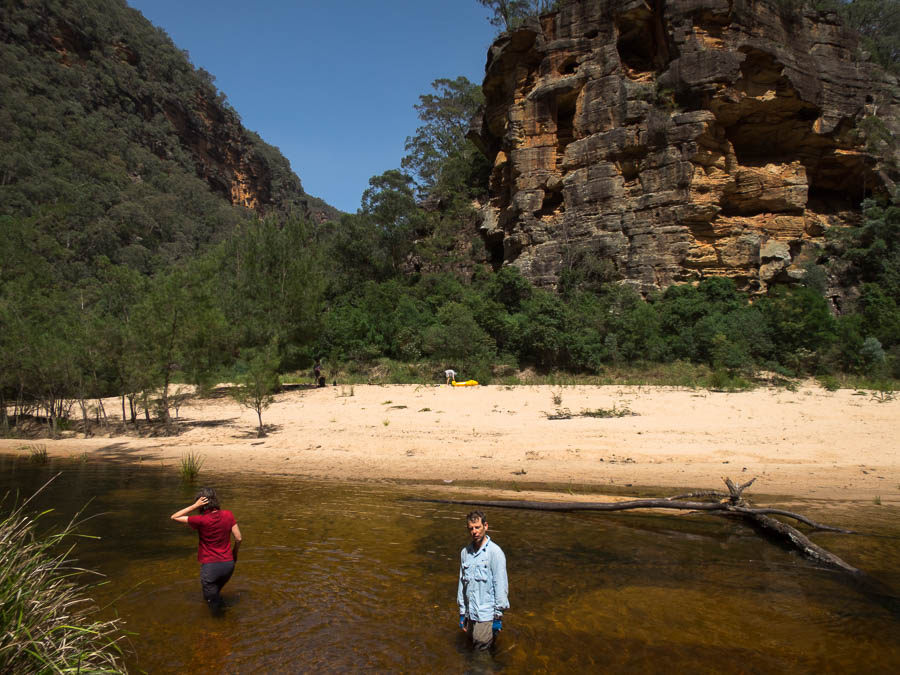 Cooling swim before the steep climb-out 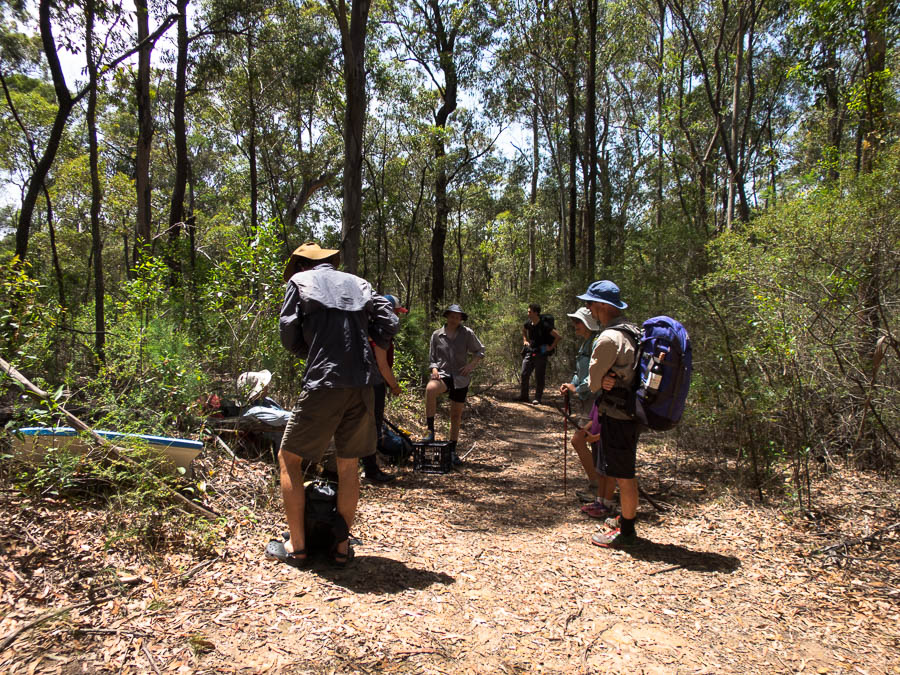 Taking a breather after the steep section

We finished off the weekend with a late lunch at the Colo Riverside (with air-conditioning! 36°C outside according to the car). An excellent weekend in the bush. (And Tom survived).