The man at the Grand Staircase Escalante National Monument (GSENM) was very helpful and it was great to speak with someone who seemed to have direct experience with the sort of things we were planning. It was after midday by the time we turned on to Hole in the Rock Road and so a short hike to Zebra and Tunnel Canyons seemed to fit the bill. While eating lunch at the trailhead a number of other hikers returned, advising that the canyon was flooded. Trying to discern what that meant we spoke to a number of groups, the last 2 guys saying that there was swimming and it was freezing and no way through etc. Since we had wetsuits in the car we figured we may as well take them if it was truly that wet. I’m not sure if we were the first people to wear wetsuits in Zebra but we did look slightly ridiculous compared to the many other groups just stripping off and sucking up the cold water temperatures. In the end they were unnecessary, other than for saving our skin on the up climbs (the water was cold, and there was swimming, but the length of the swim was not that long). 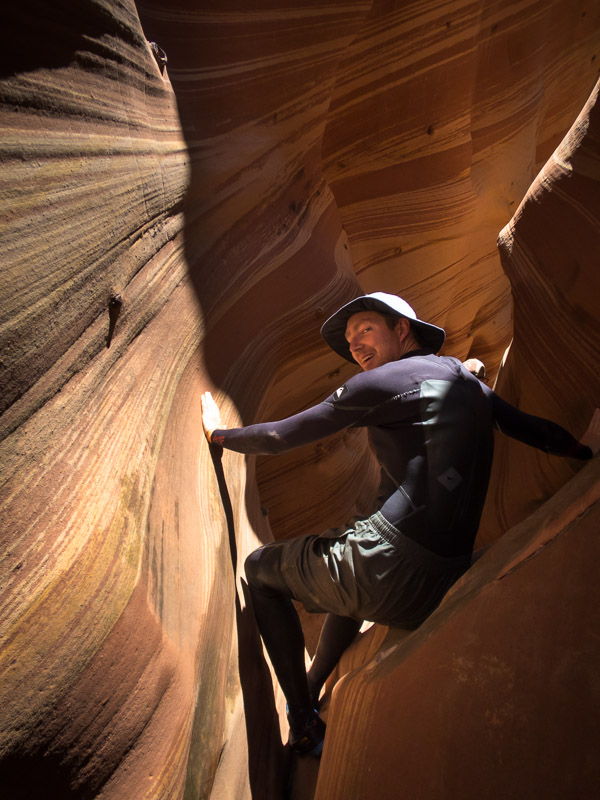 We managed to make it up 2 or 3 obstacles before turning around at a 3m climb which Tom was sure he could have got up… but maybe not back down that safely. 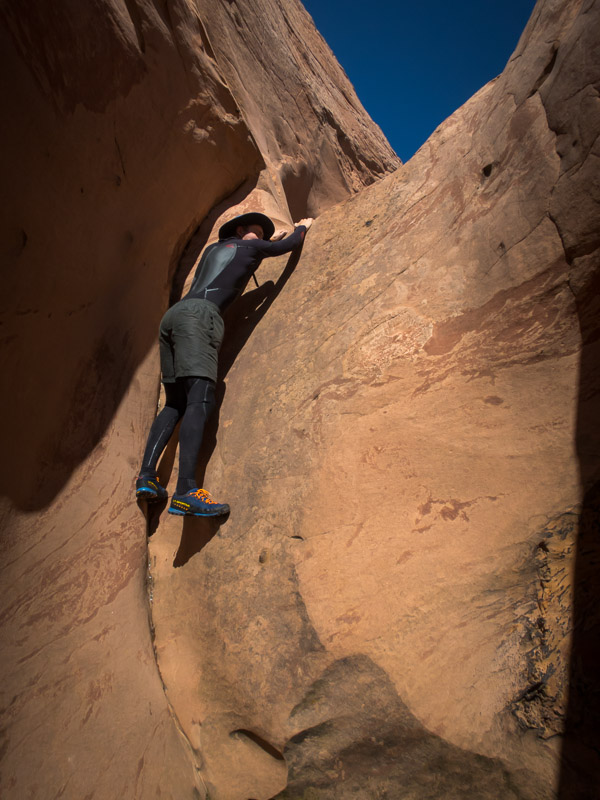 The climb we didn’t go up 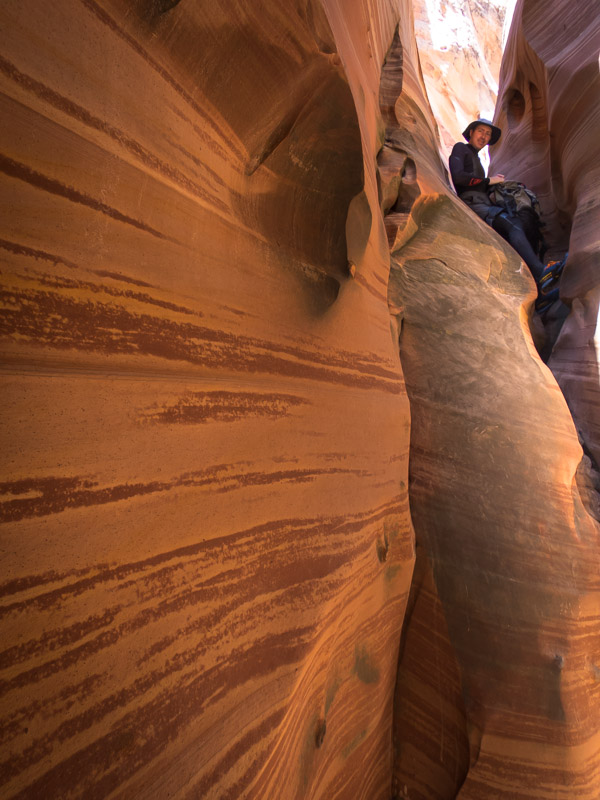 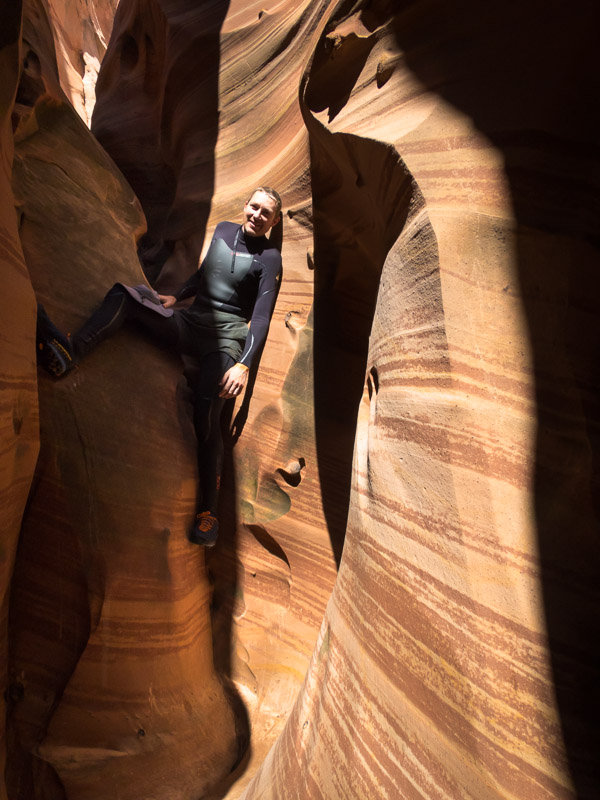 More lounging around in Zebra Canyon 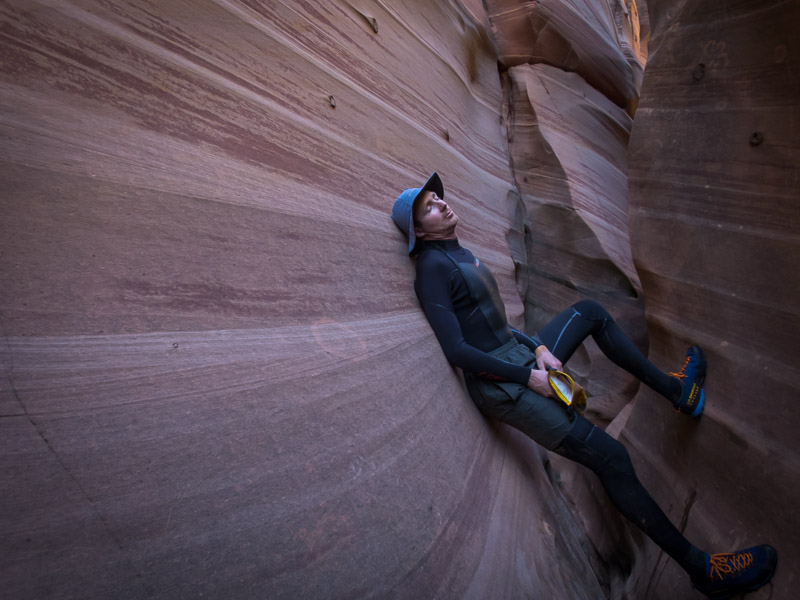 Too much excitement for one day!

We then headed around the corner to Tunnel Canyon, which was also full of water, but we didn’t bother putting the wetsuits back on for that. 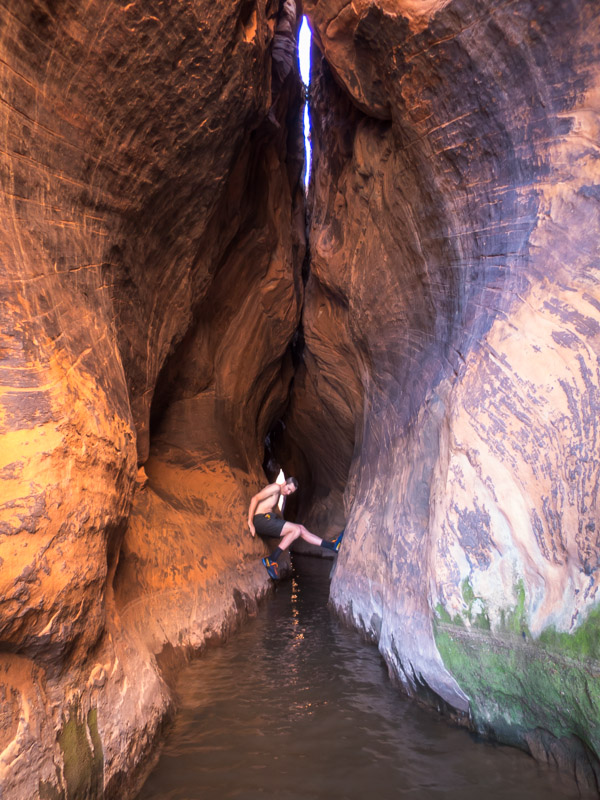 We camped at the head of Egypt 1 canyon that night and marvelled at the first ‘downclimb’ which was pretty daunting. 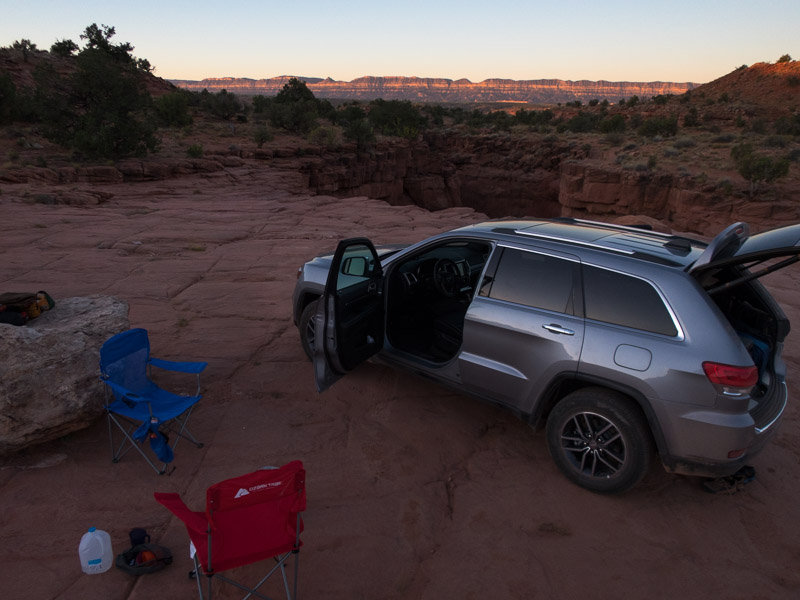 Camp at the head of Egypt 1

Egypt 1 wasn’t on our hitlist, the next day we headed for Egypt 3. It was full of mud, and a lot of squeezing, with the non-technical section never particularly deep. I wouldn’t be rushing back to it. 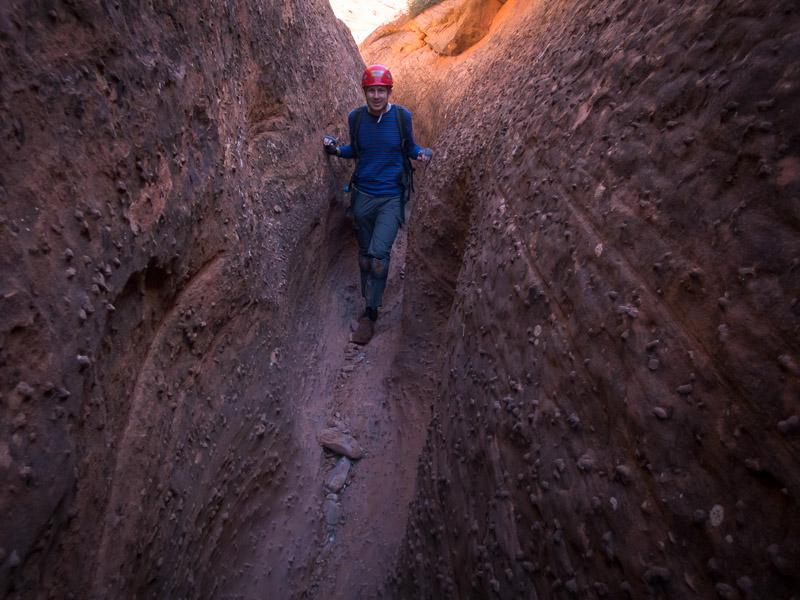 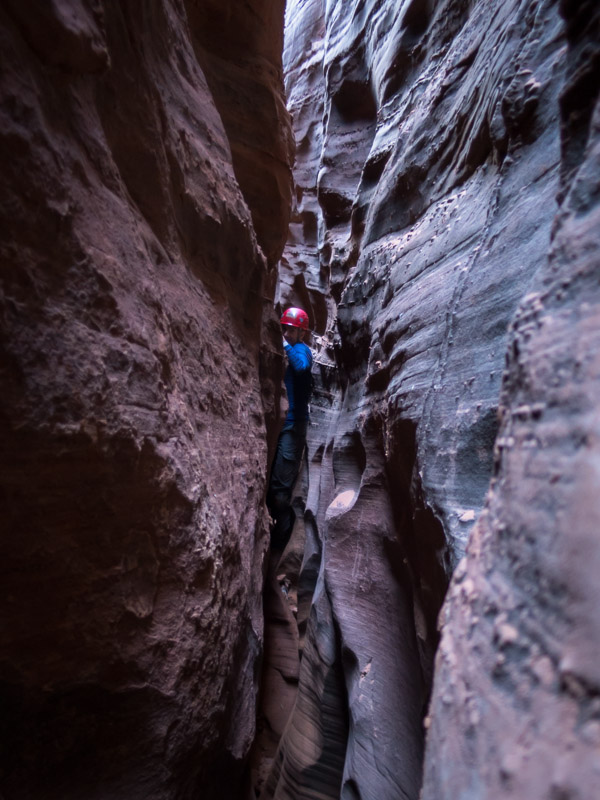 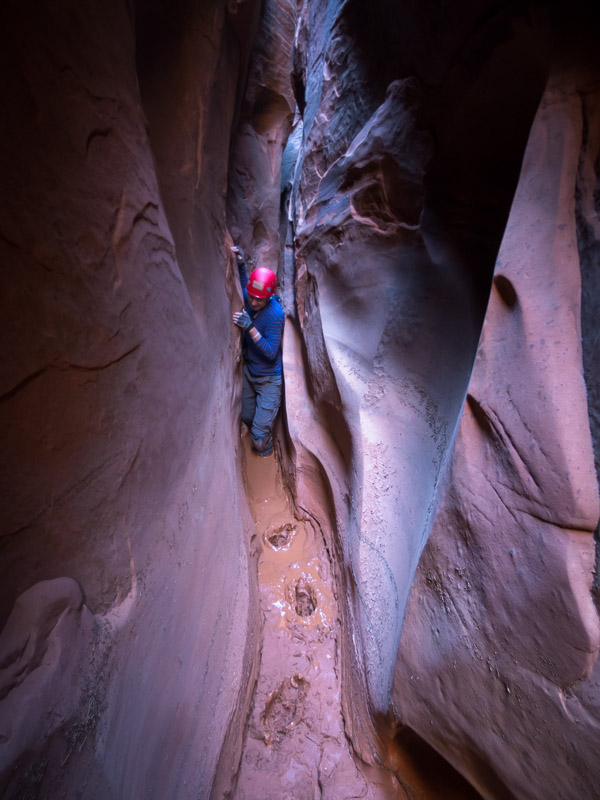 I think this is what they call Type 2 Fun.

The optional technical section had a semi-keeper pothole which Mel & Rich had told us about. When we got to it there was a lot of water. I gamely dropped into the pothole only to find it was neck deep! And right next to where we needed to climb out I couldn’t touch the bottom. That wasn’t part of the plan! Tom had a go next, and also couldn’t touch the bottom where we needed to climb out, but could a metre to the right. After a couple of attempts I managed to launch myself from standing on his cupped hands across to the lip and haul myself out. I anchored a rope for Tom to climb out on. The second pothole was also wet and muddy and probably not something one person could have got out from. It was satisfying to get through the technical section after being somewhat frustrated by the mud & squeezing in the non-technical section. 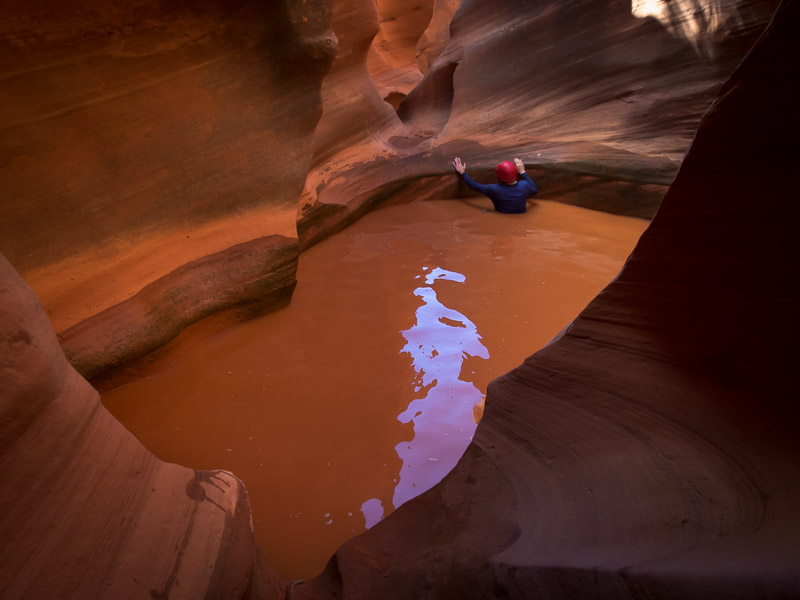 Tom checking out the way out of the first pothole. A metre to his left he couldn’t touch the bottom. 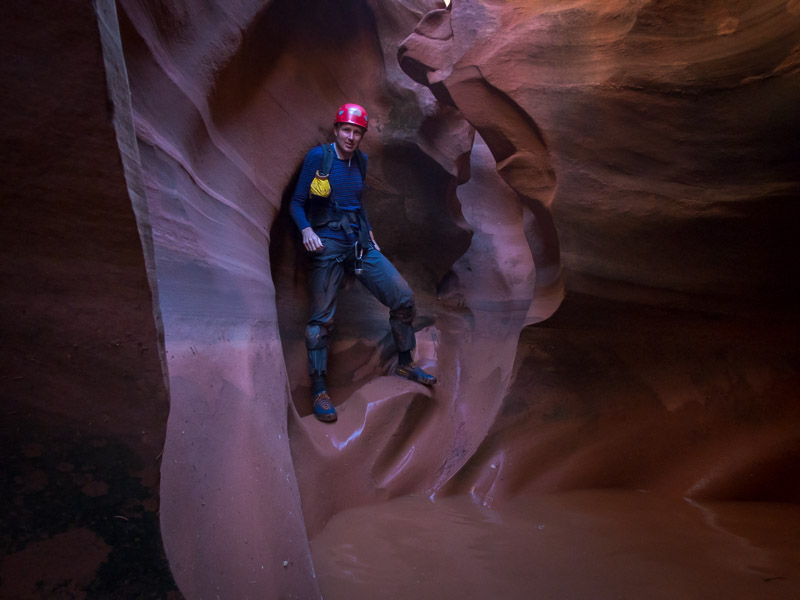 Walking out it was windy and so we were keen to find a sheltered camping spot. Not far from the end of the Egypt Road we tucked ourselves in amongst some bushes. The wind just got worse so we ended up sitting in the car for the remainder of the afternoon and the evening. There was a brief period where we struggled to cook dinner outside before returning to the car to eat. Needless to say I didn’t sleep very well as the wind kept up all night. Just before dawn it finally settled.

We had various options for the day, one of which was to do Neon Canyon as a day trip (originally we were planning to camp a night on the Escalante River). Initially when the alarm went off I said I didn’t want to go following such an awful night. But after 20 minutes of contemplating I changed my mind and so soon we were eating breakfast and packing gear for the day. It was not long after 8am when we left the Egypt Trailhead. Buoyed (?!) by conversations with other groups that had camped out that it had been a horrendous night with the unseasonable wind for them too. We were a bit scared by the track notes and warnings of a long day which had the pleasant effect of making Tom faff less. However, we managed to do the technical section of the canyon in just under 2 hours (compared to 7h that a group we spoke to on the way in had taken!?). I was very pleased Tom had convinced me we should drop in at the North Fork rather than the earlier entry options on Tom Jones’ track notes. For the first time in the trip we had lunch at lunchtime rather than mid-afternoon. 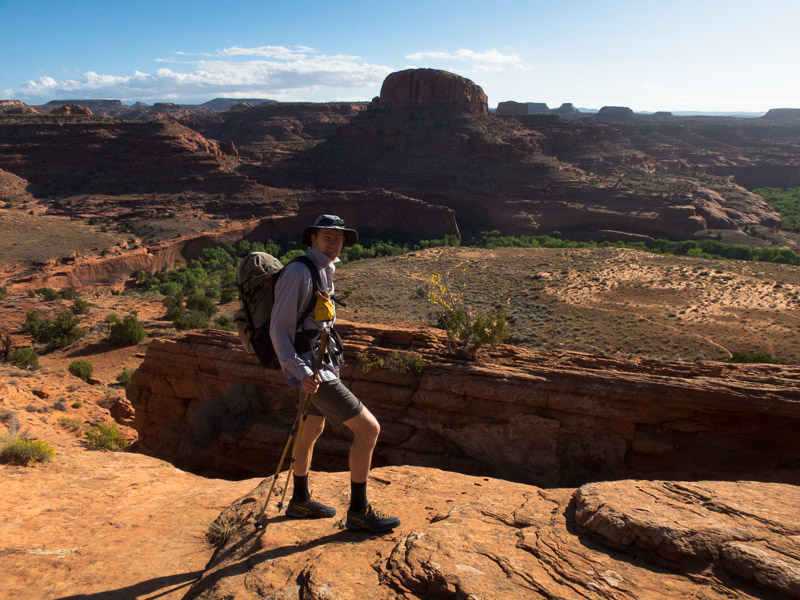 Near the start of the hike. Neon is in the slot in front of the dome. 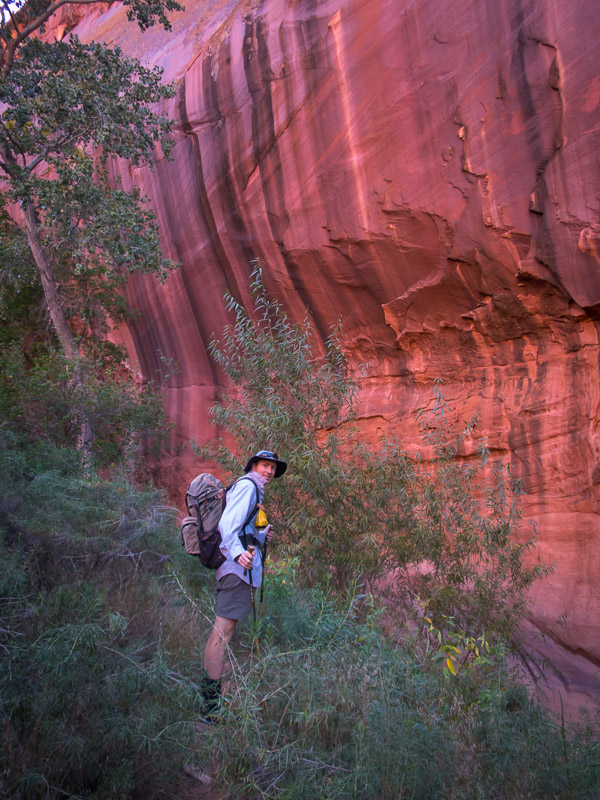 Entering the bottom of Neon Canyon from the Escalante River 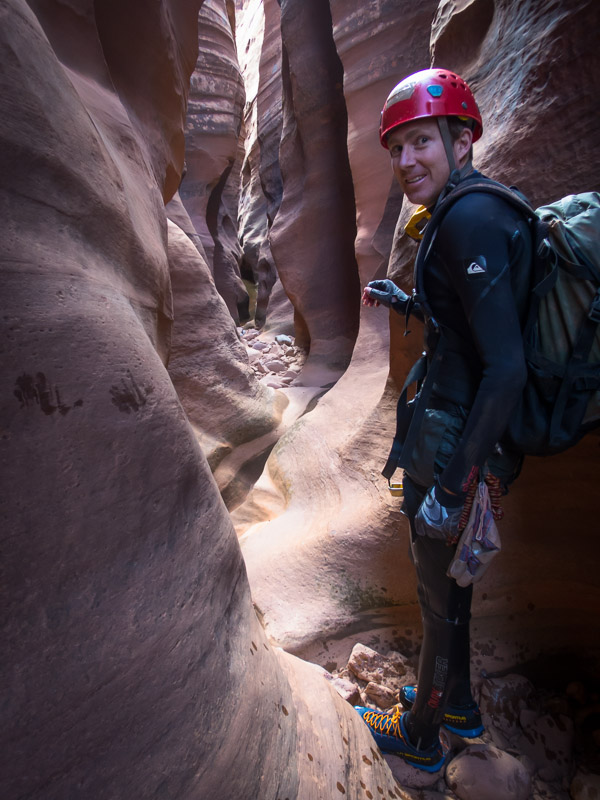 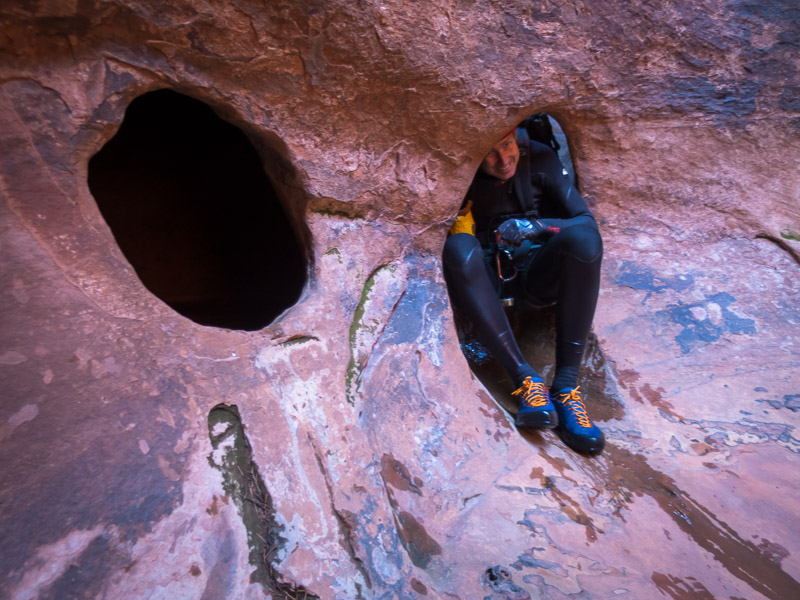 A less common feature to get through a canyon 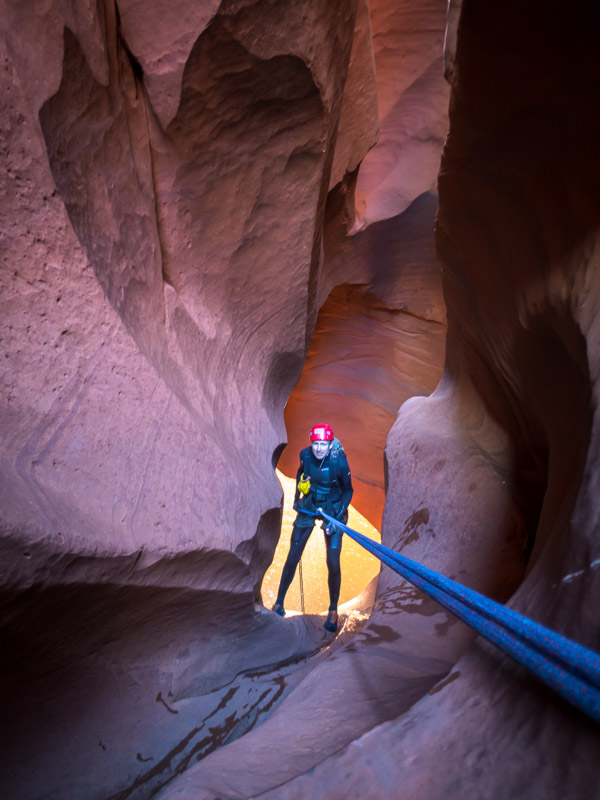 Tom abseiling into the Golden Cathedral 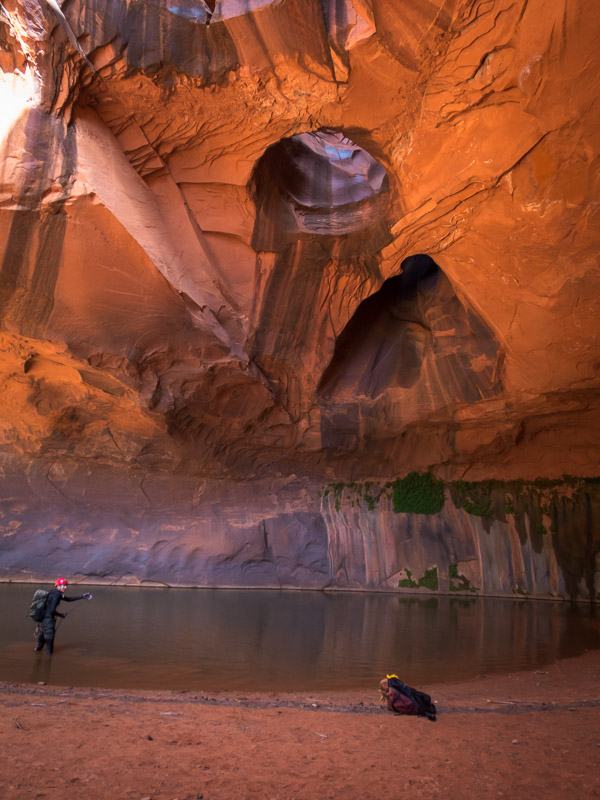 Tom pulling our rope having abseiled into the Golden Cathedral

We had a leisurely lunch at the Golden Cathedral, including watching a solo canyoner rap down, before the long slog back to the car. All up 8.5 hour round trip. (including 1.5 hr lunch?)

I was worried about getting back out on the Egypt Road and so wanted to get out that evening rather than camp at the scenic trailhead. So off we went, planning to camp somewhere in the vicinity of Spooky/Peek-a-boo Canyons. Using the Kelsey guide we headed off on the Early Weed Road looking for a nearby campsite. Quickly we came to a sandy wash which Tom sped across only to find we couldn’t get out of it. At this point we discovered we had a rear-wheel drive car. A group of 3 women noticed our problem and stopped to help. After letting the tyres down a lot and with pushing we managed to get back onto the road. The car had inbuilt tyre pressure monitoring, and apparently the front left tyre was now at 17psi (instead of 36, the others were in the mid-20s). I was not happy to keep driving round on that and insisted we headed into Escalante to pump the tyres up. So 42km later we were in Escalante as the sun had set, on a Friday night, with no accommodation organised. After driving past numerous motels with ‘no vacancy’ signs we managed to get a tent site at an RV Park. The hot shower was greatly appreciated, as well as the USB charging points at the site, and the lack of wind to keep us awake all night!

We weren’t going to drive all the way back out to Spooky & Peek-a-boo so we decided to head for Calf Creek Falls instead. Getting there early in the day meant we were able to get one of the first-come, first-serve campsites. The hike to Lower Calf Creek Falls was busy but the falls were spectacular. Yet again we underestimated how long it was going to take and didn’t bring lunch so we had another mid-afternoon lunch when we got back to camp. 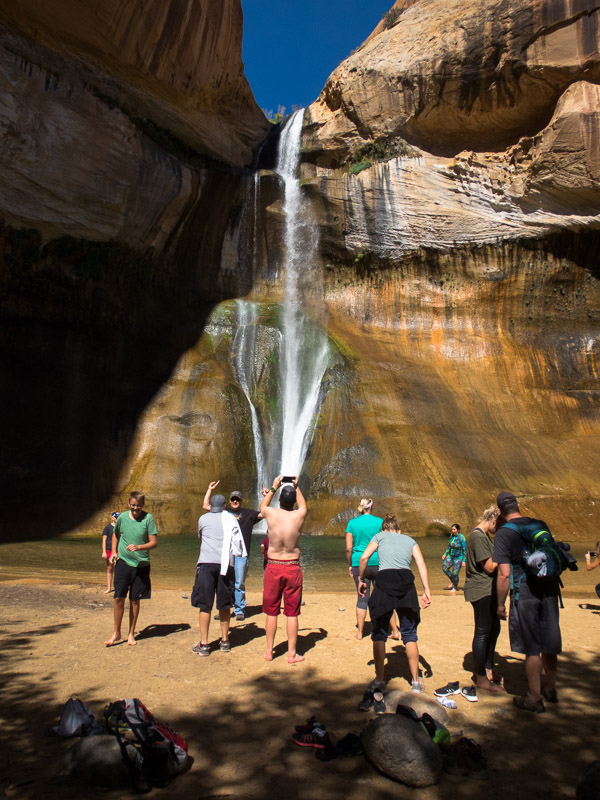 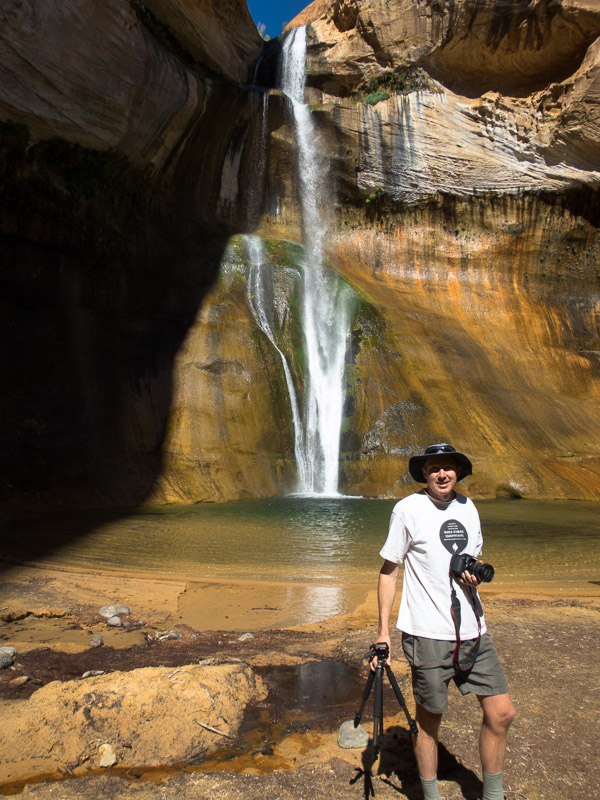 But with the right angle you can make it look like you’re the only one there!

Our final day in the GSENM we headed out on the Old Sheffield Road (Spencer Flat Road) to do Upper Red Breaks Canyon. We almost didn’t get there as the car struggled to get up one steep, rutted out hill, but after 3 attempts we were through. Other than that one section the road was good quality. We descended the East Fork of the Upper West Fork of Red Breaks and ascended the Upper West Fork. The East Fork was ok, but the West Fork was stunning. We had to work pretty hard in the last really tight narrows, which were both squeezy and an up-climb. A beautiful canyon. 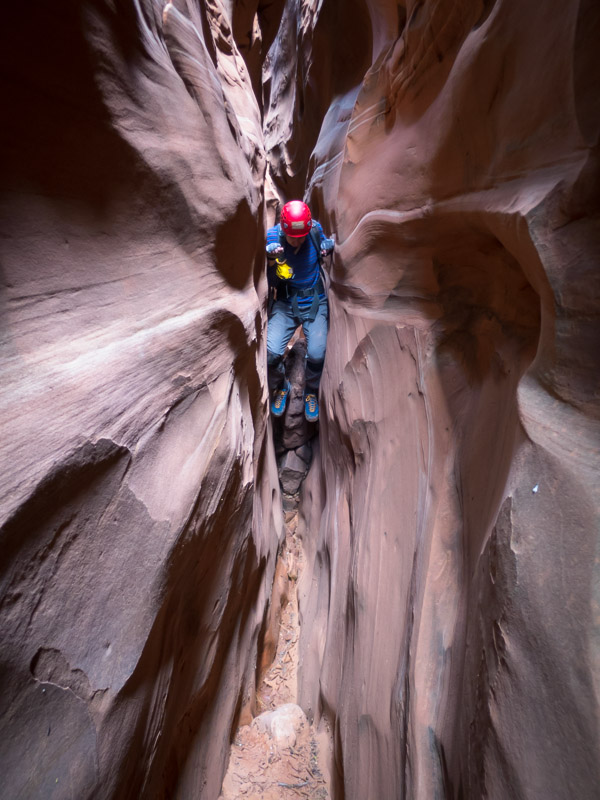 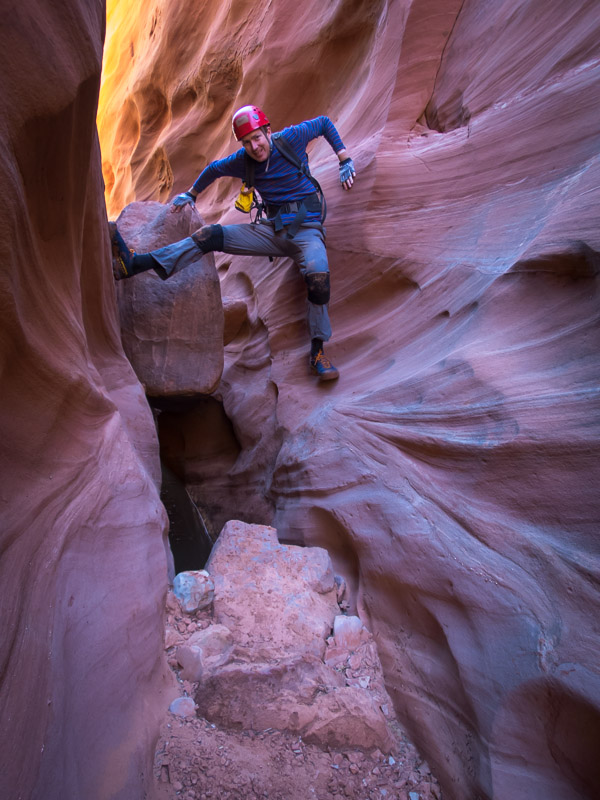 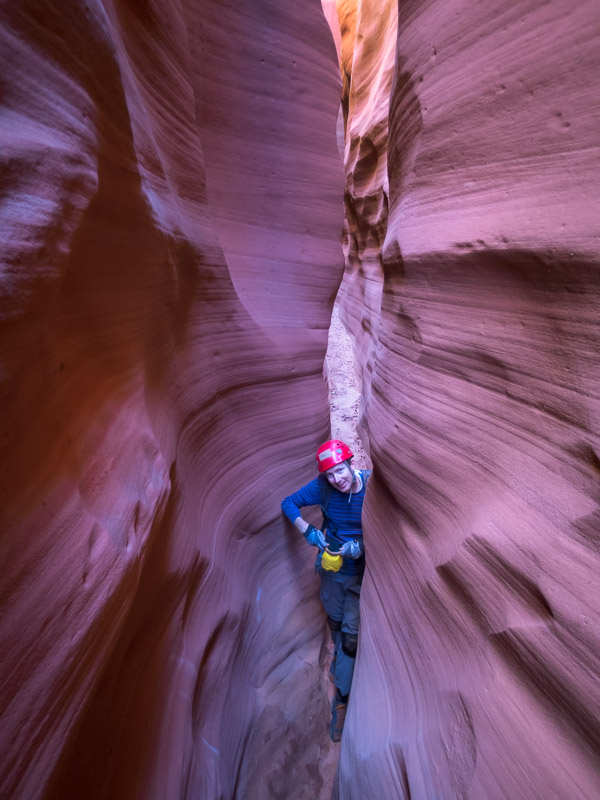 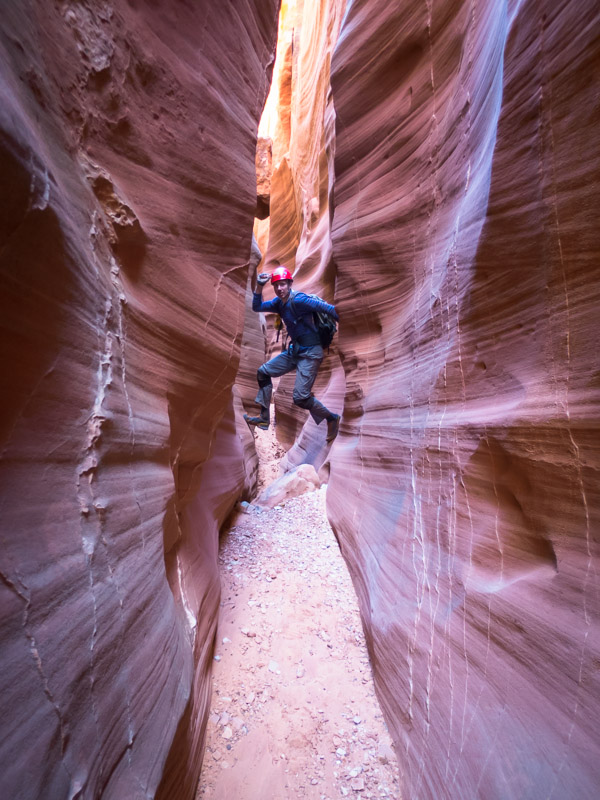 Tom with all the moves in Red Breaks 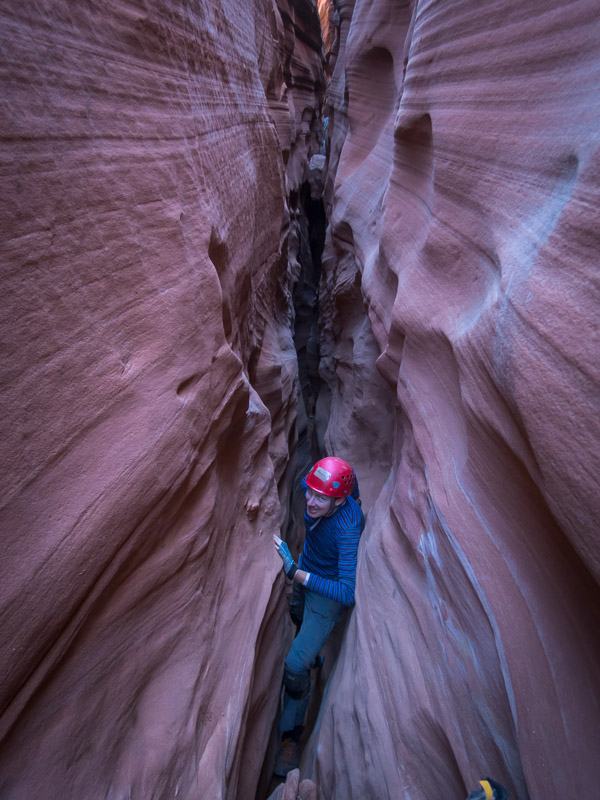 Tom in the most strenuous section of the day. Narrow and an up-climb!

That night we camped just off the Old Sheffield Road at a balcony camp with far-reaching views to the East. 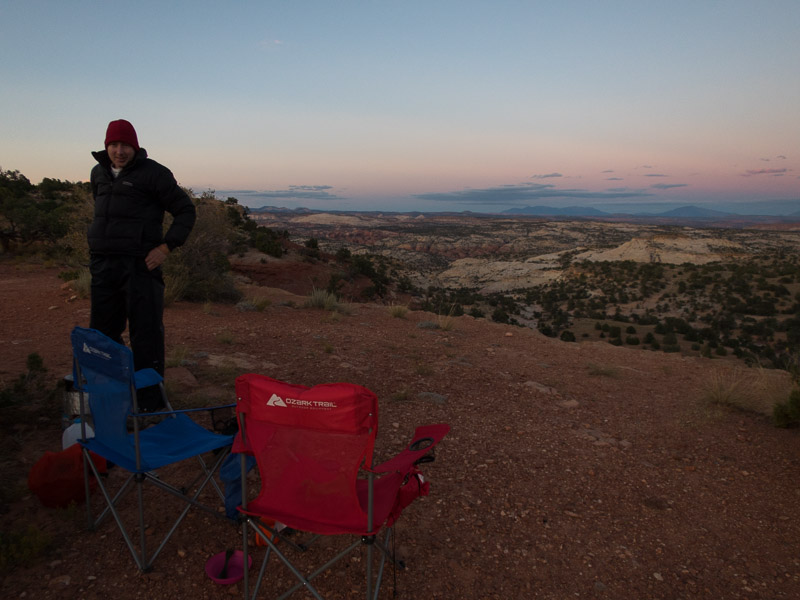