The next day it was time to move on from Escalante heading for the San Rafael Swell. We had a mandatory stop at Stan’s Burger Shak for a shake and fries in Hanksville before heading to the Little Wild Horse trailhead. We’d skipped this hike last trip in favour of Ding & Dang canyons but apparently it is the most popular hike in the San Rafael Swell so figured we should do it. We went up Bell Canyon first and then looped back down Little Wild Horse Canyon. Bell Canyon was underwhelming and unless you’re looking for a longer hike I would just walk up and back down Little Wild Horse. Like many of the canyons we’d done Little Wild Horse was holding water (and of course mud). We had been warned by other walkers that there was a section where it was impossible to stay dry and that we would get thigh-deep wet. 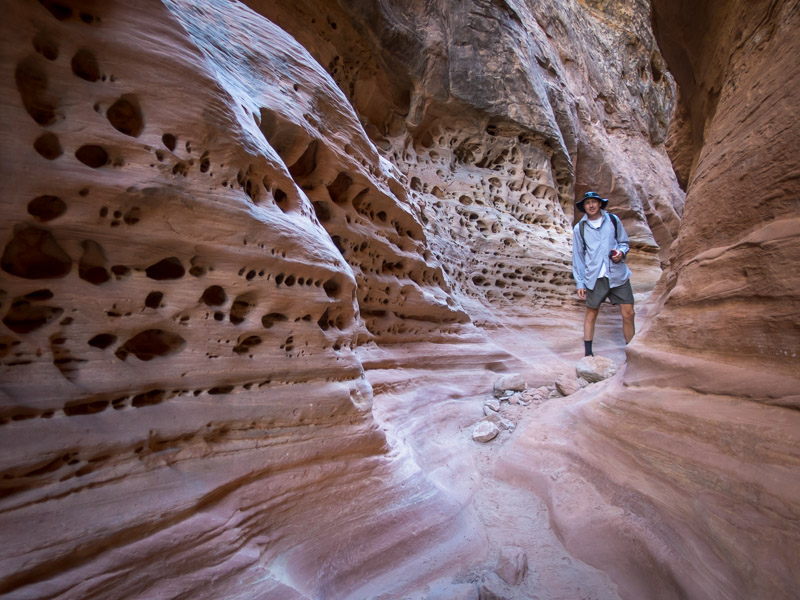 So every section of water we got to (and got over without getting wet) we wondered if we’d passed the ‘impossible section’. 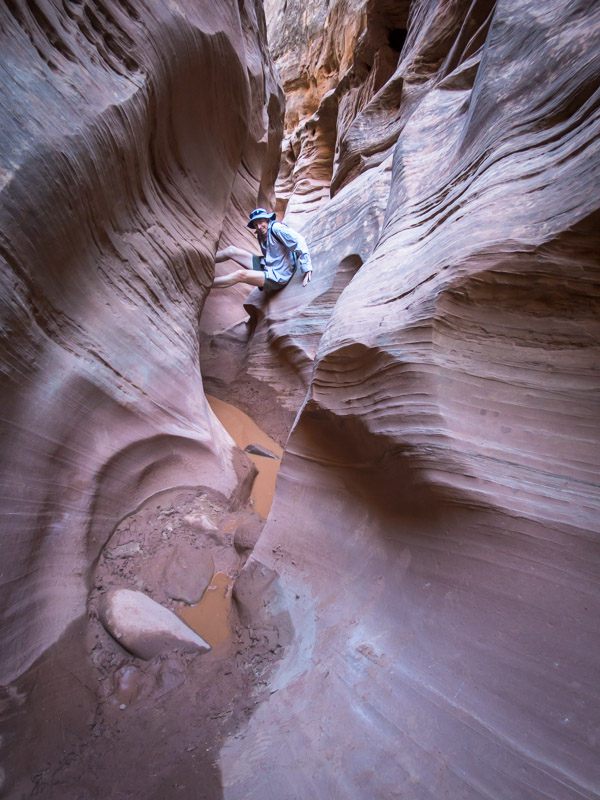 Eventually we got to it – a 30m long pool. It looked like it was just narrow enough to be able to be bridged. It was with great satisfaction (and a lot of stretching & contorting) that we both managed to keep out feet dry. We camped near the car park that night in the dry wash which was a pleasant spot. 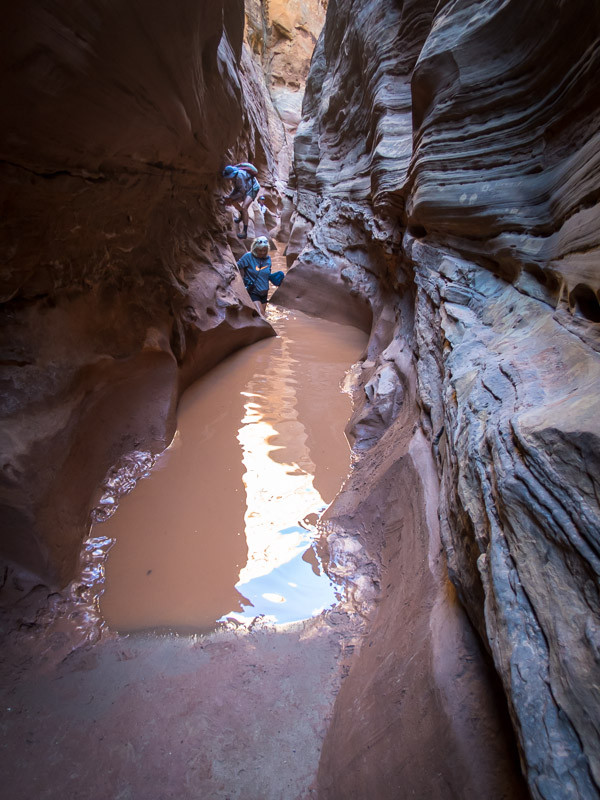 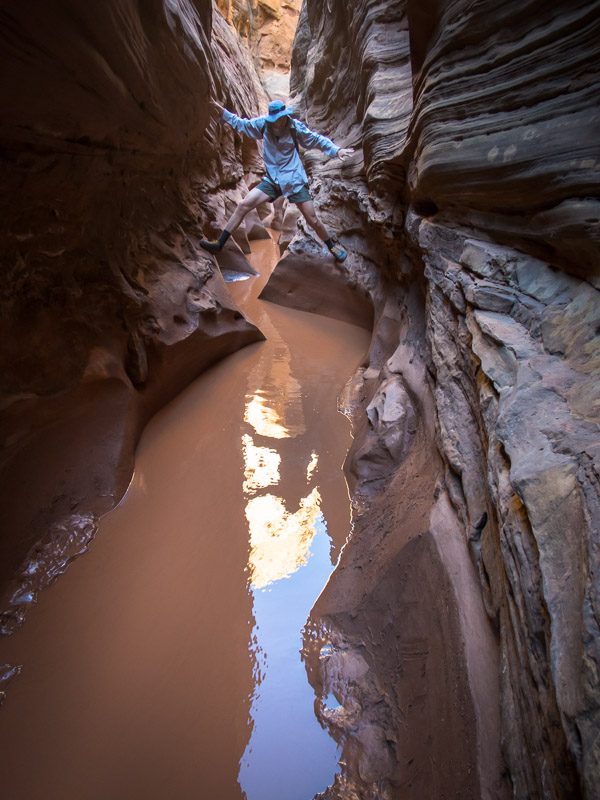 Tom’s foot was still giving him grief so a very long Music Canyon/Muddy Creek loop was scrapped from the plans. Instead we headed to Baptist Draw and Upper Chute Canyons. It was only after we turned onto the access road, having already driven for over an hour on the main road, that we realised we could have cut off 100km of driving by taking the Temple Mount Road directly from where we’d been overnight. A lesson in having a look at the map rather than just following directions on the track notes! Getting to the trailhead took longer than expected as the roads were pretty rocky. The canyon (including walk in and out) only looked like about 4km all up and Tom was having trouble understanding how it would take 4-6 hours. Another super-easy canyon to get into, and it was a good one. We were pleased to be out of the squeezy narrows and enjoyed the ‘narrow enough to walk through without being awkward’ nature of Baptist Draw. The abseil into Upper Chute was beautiful (unfortunately my photo below does not do it justice). 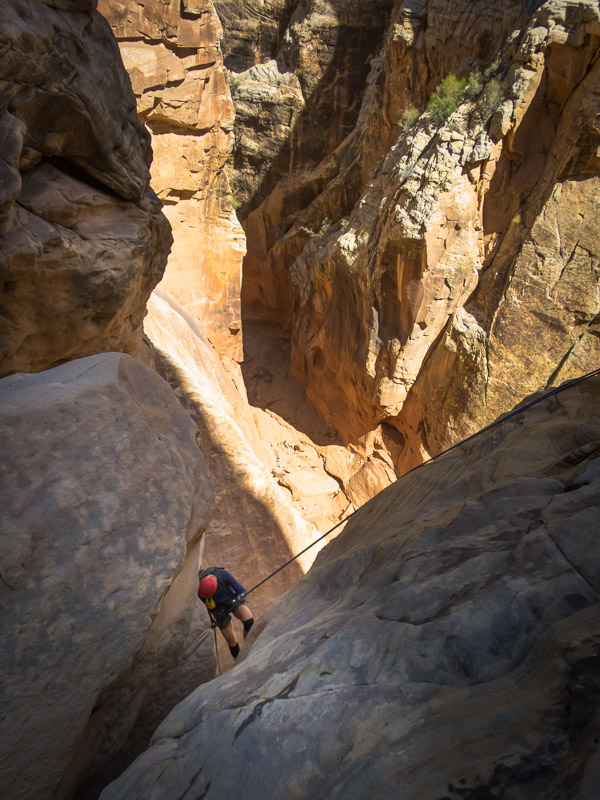 We had no idea that Upper Chute was going to be so stunning, or so long! There was plenty of water, and it was icy cold. We were glad it was never more than waist deep as we hadn’t bothered with wetsuits. Despite the beauty we were both glad when the narrows finally relented and there was no more mud or water! It took its toll on us. I went a cropper in the mud and landed heavily on my knee and Tom strained his shoulder as well as falling into a pool while high bridging to avoid the water. 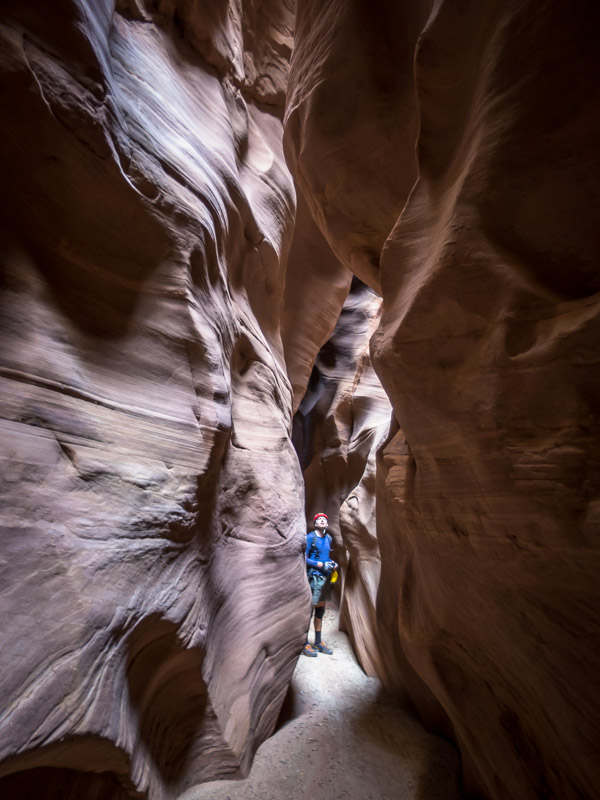 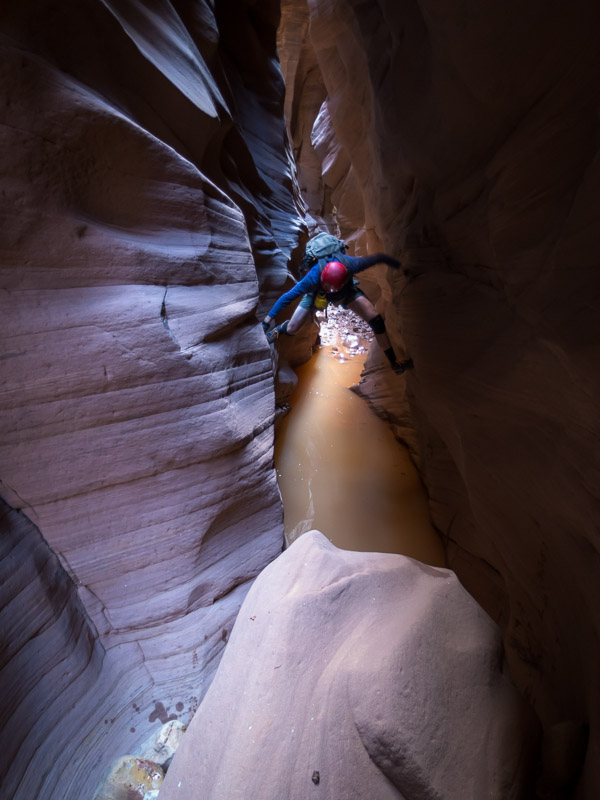 This was meant to be a video, but technology fail on my part. Taken just before Tom fell in. 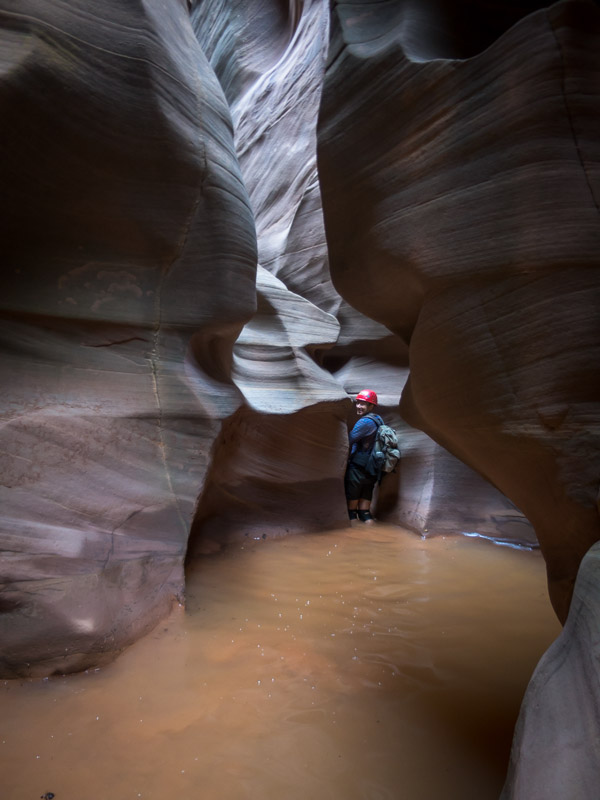 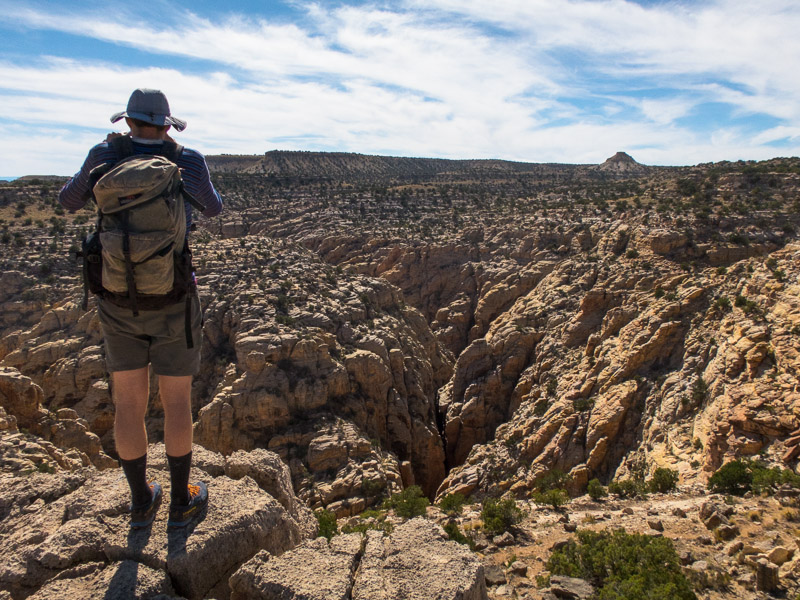 Camping at the trailhead would have been lovely but the forecast was for potential rain the next day and with the dodgy roads we decided it was better to get back to the main dirt road that afternoon. We camped in the vicinity of Family Butte and went for a scurry up a nearby hill to get a better view as sadly the ridge blocked a direct view from our campsite. 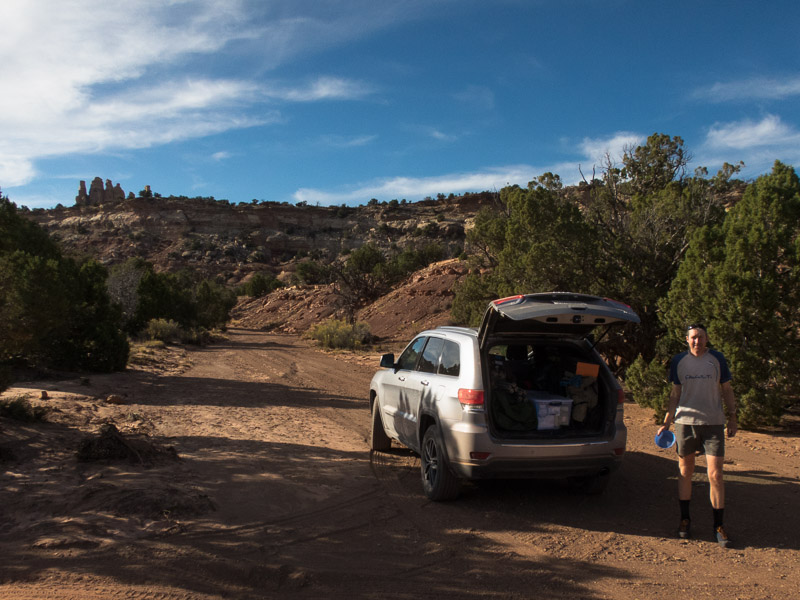 Campsite (sort of) below Family Butte

The next morning the weather was definitely turning and we felt good about our decision to get out early. We had intended on spending another day in the Swell but with fairly mediocre options on the table and the weather looking unpleasant we decided to head to Moab early and get a motel room. It rained for most of our drive to Moab but cleared just as we got to Arches National Park. After 25 minutes queuing to get in we joined the masses who were avoiding the weather in the visitors centre. After securing a hiking permit for the Fiery Furnace the next day we went on a tourist drive of the park. We visited the Windows Section, having lunch under the double arch. 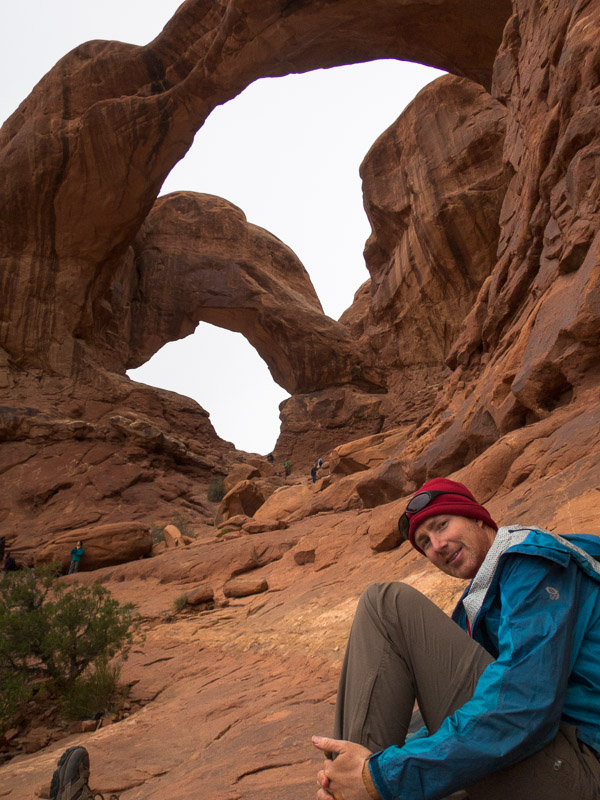 Getting our tourist grove on at Double Arch, Arches NP

I’d randomly found the motel on google that morning and when we arrived we were amused to find it was the same place we’d stayed in 2013 when we were driven indoors by a blizzard.

The next day we returned to Arches, without the queue this time, and headed to Delicate Arch. Apparently the most famous arch in the world this was an excellent hike and highly recommended if you are in the park, despite the hoards. 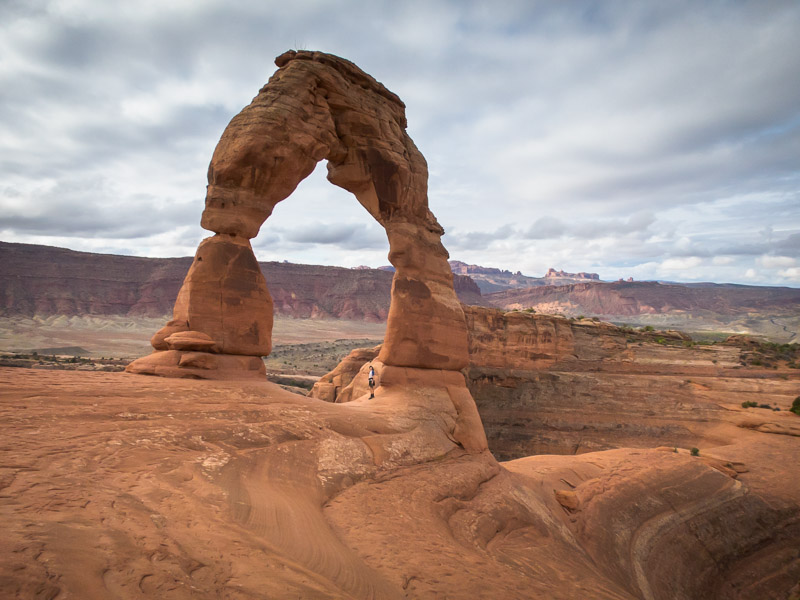 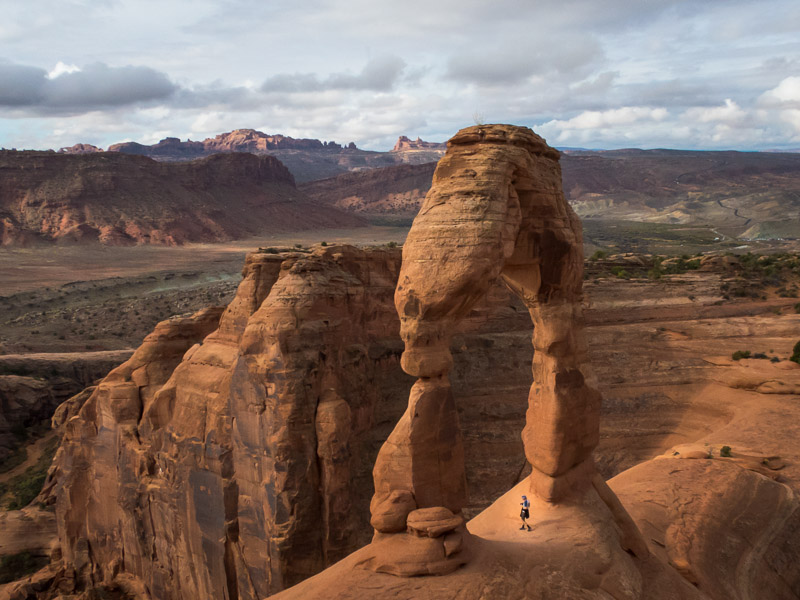 Next we headed into the Fiery Furnace. The Fiery Furnace experience is meant (as I understood it) to be about not following trails, or other people. Tom and I didn’t see anyone for quite some time as we explored up various ribs with varying degrees of dodgy climbing. After lunch we were quite surprised to round a corner and find about 3 groups looking agitatedly for ‘arrows’. They couldn’t grasp the idea that we weren’t following arrows, and we were a little concerned when they started following us! We quickly left them to their arrow finding to continue our meandering. Admittedly once we’d discovered there was a marked path we did end up following it (backwards) back to the car park. We seemed to have been the only people who hadn’t followed the arrows in – I’m not sure how we were supposed to know they existed or even see them at the start. Of the other groups we encountered their first reaction was “People!” as if they had been stranded in a jungle for several days. I guess it just shows how often we are in wilderness areas where seeing people is a surprise compared to the average tourist. 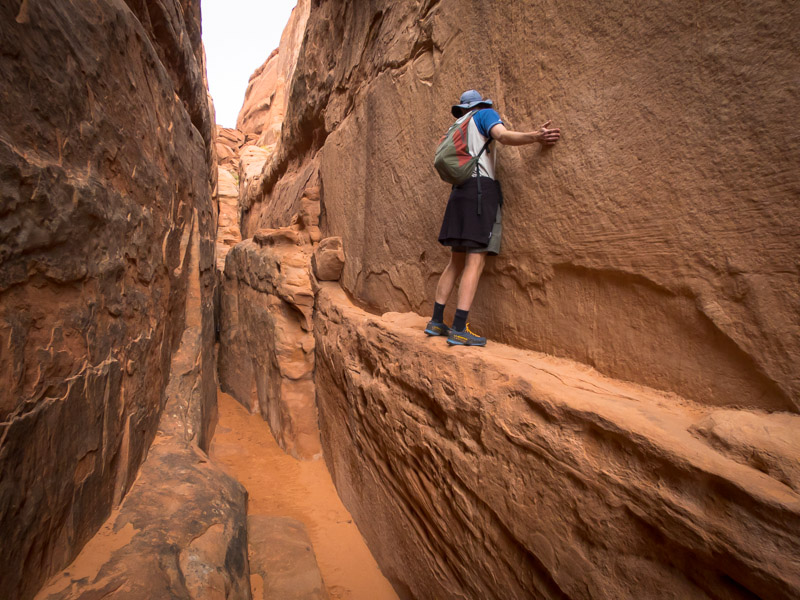 Is this Tom’s Alex Honnold moment? [Exploring the Fiery Furnace] 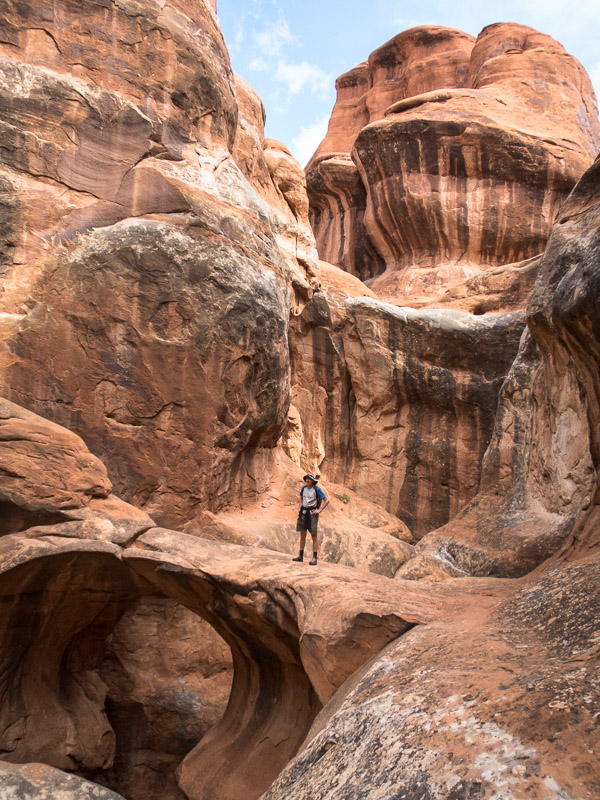 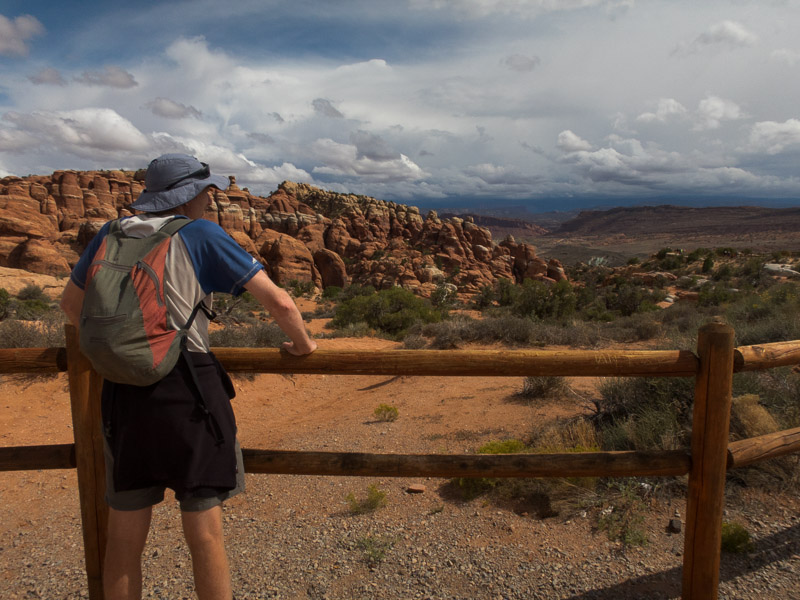 Looking back out to the Fiery Furnace, Arches NP

We had a pleasant evening with Evan, who we’d met in the Blue Mountains earlier in the year. And then we headed out with him the next morning to do Elephant Butte ‘canyon’. It’s classified as a canyon for the purposes of getting a permit but there’s not much to make it a canyon, more of an hike with some abseiling. The top of Elephant Butte is the highest point of Arches NP with amazing views of the surrounding areas. We were amused to find an entry in the logbook from (presumably) our friends Jarrah & Megan. 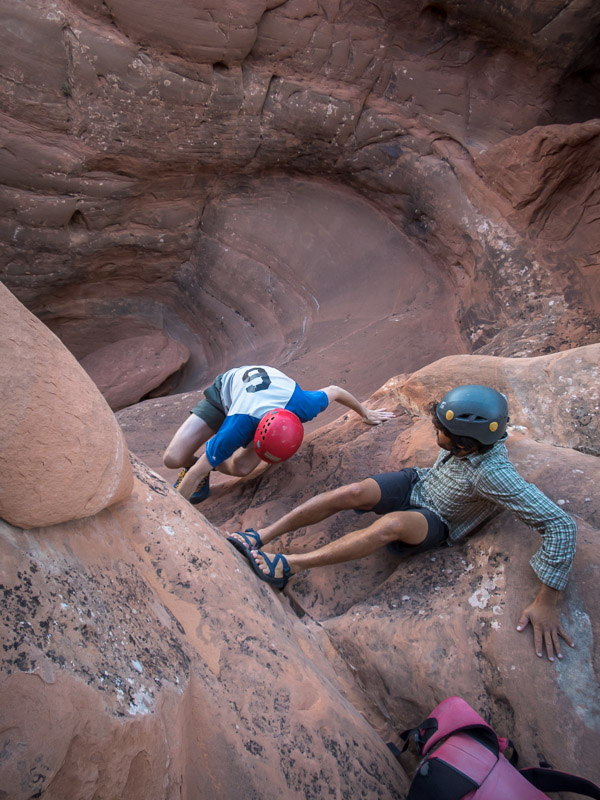 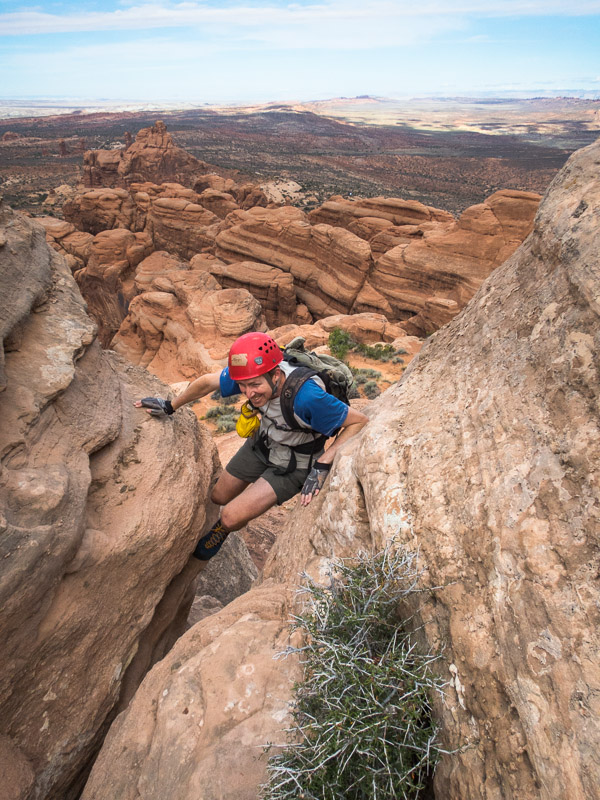 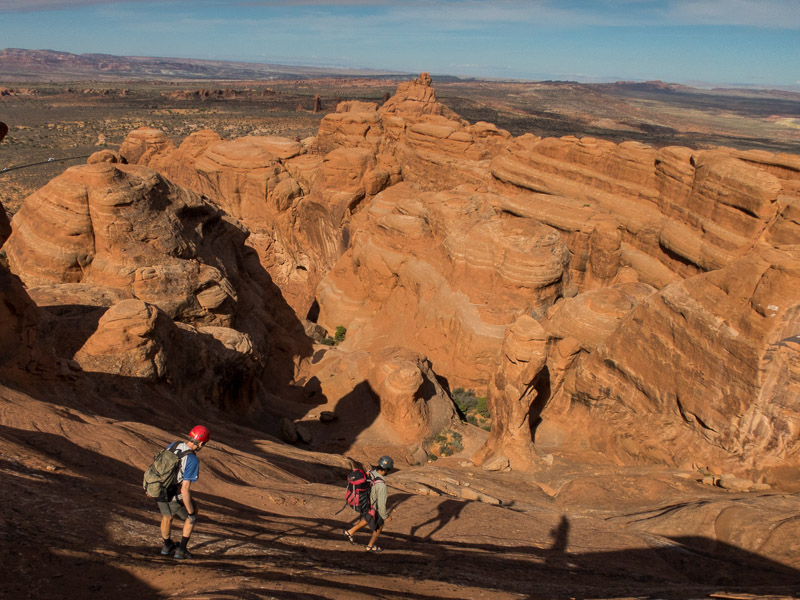 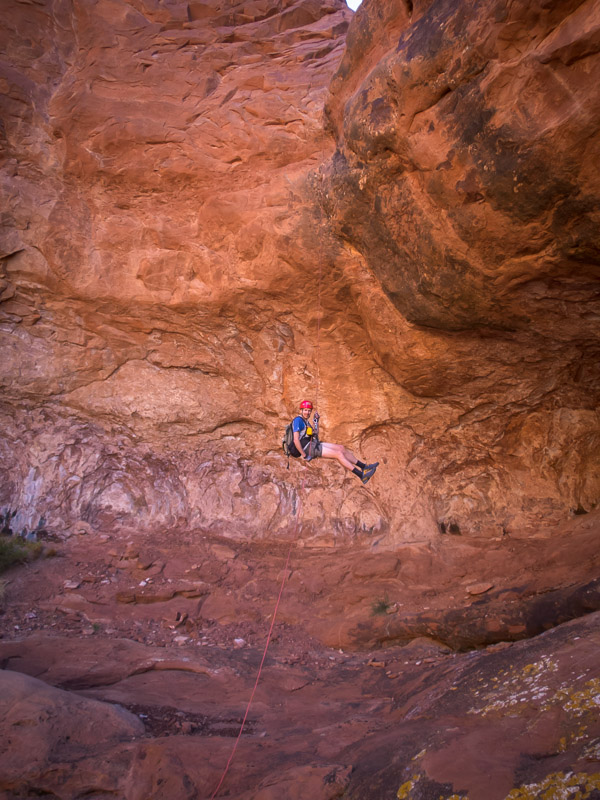 In the afternoon we headed out to Fisher Towers for a sunset hike. There were a number of climbers topping out on the popular climb on Ancient Art as we went past. We had to set a quick pace as we’d left it a little late in the afternoon but made it to the end of the ridge and official end of the hike with good time. Unfortunately being out for sunset meant getting back to Moab after 8pm and dinner options were thin on the ground. We had a very disappointing meal at Wendys just because it was over the road from our motel. 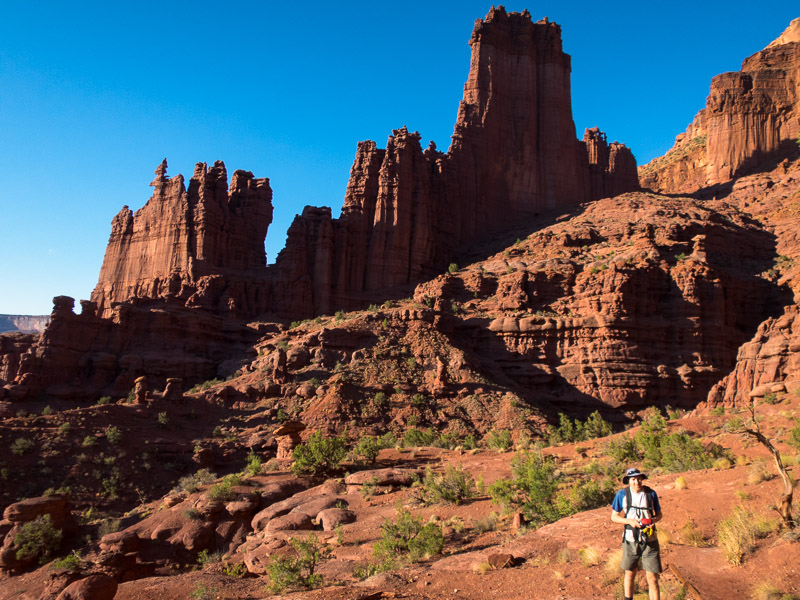 Fisher Towers in the late afternoon. There’s climbers on Ancient Art (the corkscrew formation on the left)… not that you’ll be able to see them in the photo 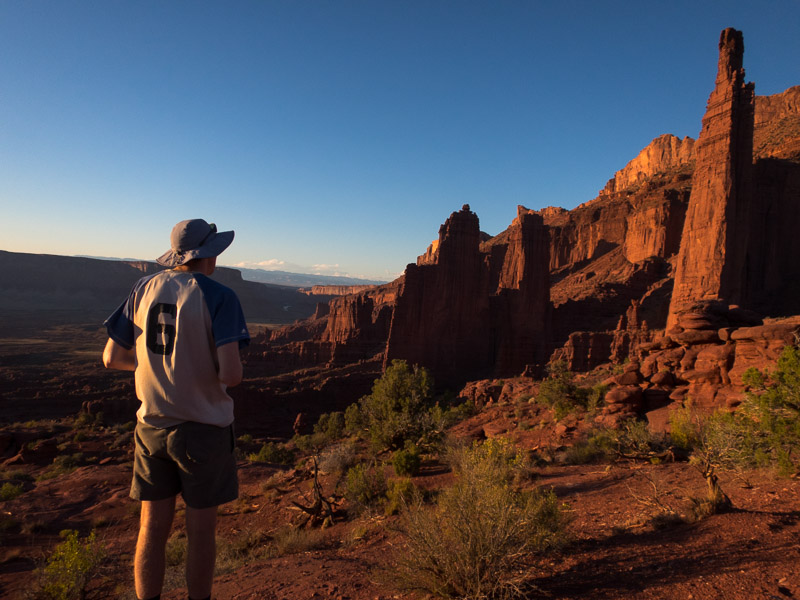 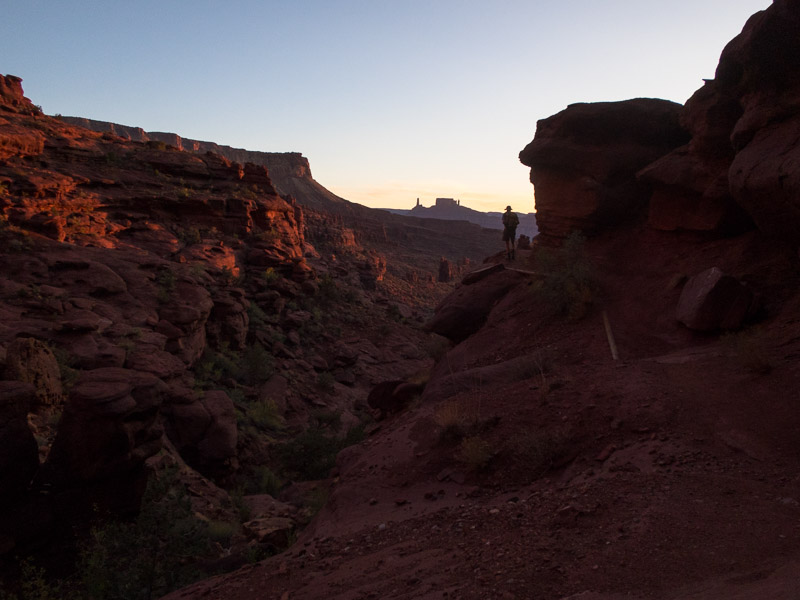 Views from Fisher Towers at sunset

We figured we needed to actually do some canyons while we were in Moab so lined up a Big Horn / Dragonfly loop as the objective for the next day. We set off from the car with the sky looking a little threatening but the forecast had been for a slight possibility of rain in the afternoon so we figured we could knock off Big Horn and bail on Dragonfly if needed. We got to the tunnel below Big Horn as the grey clouds started crackling lightning. 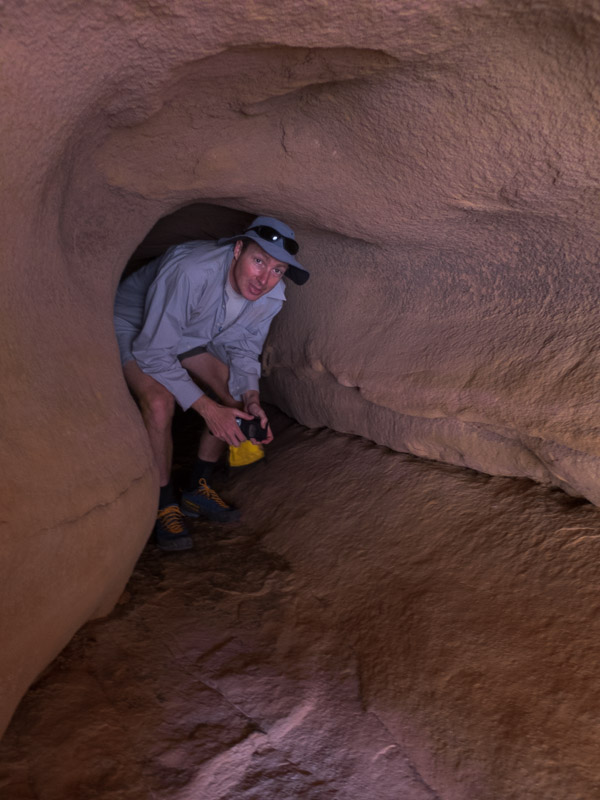 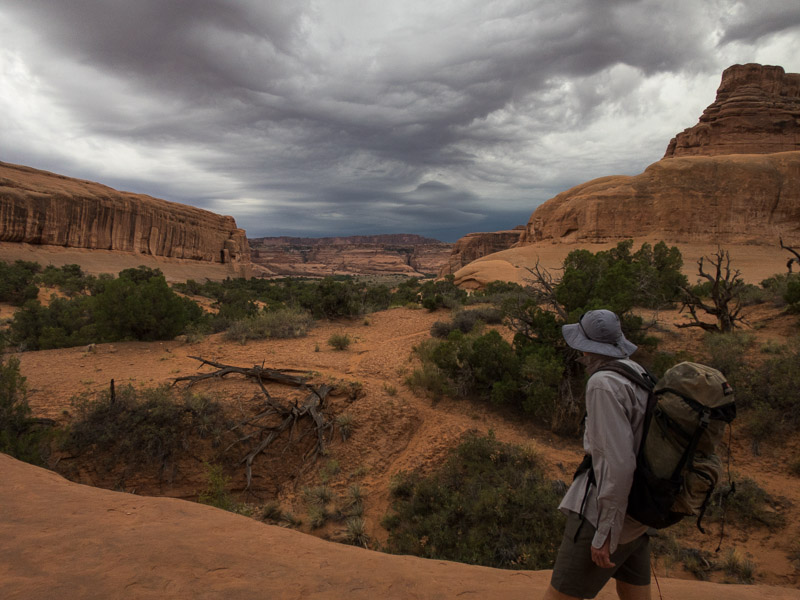 Heading up onto the ridge wasn’t an option with the amount of electrical activity going on – so do we sit it out or head back to the car? We decided on the car, getting soaked in the process – though the weather didn’t bother a lone hiker we met who was keen for a long chat while we were standing in the open with lightning directly overhead. By the time we got back to the car Courthouse Wash was flowing fairly healthily a good illustration to us of how quickly water runs off the slick rock here. 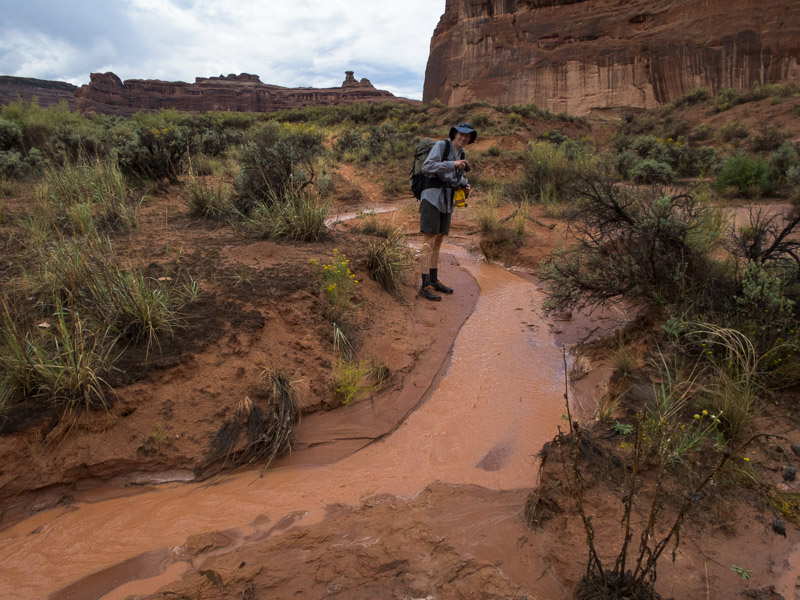 Run off in a minor wash after the storm

We hung around at the car parks watching waterfalls form off the rocks before heading back into Moab for lunch. The road into Moab was flooded in a couple of places – many 4x4s just speeding through splashing murky red water over anything in their path.