We farewelled the Roost, with plenty of canyons there to come back to, and started making our journey south. We camped in Cedar Mesa at a pleasant site off the road. 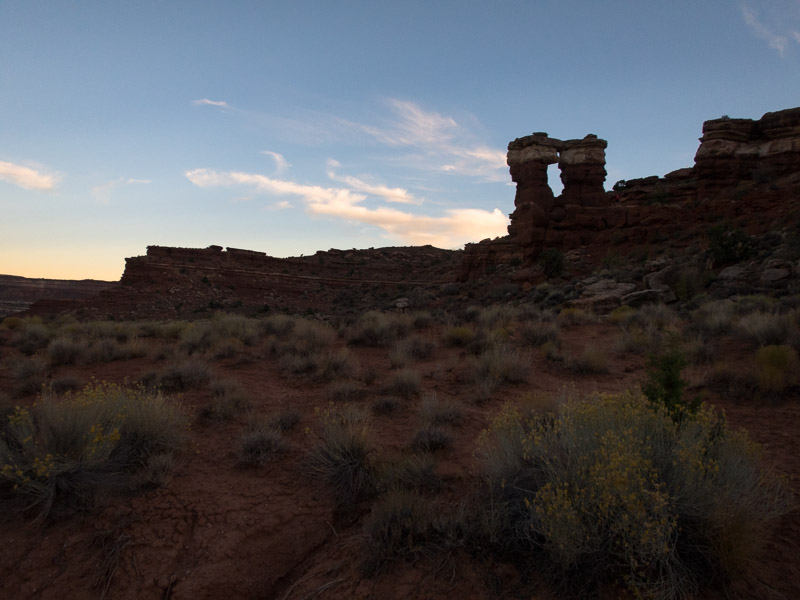 Sunset at our Cedar Mesa campsite

We had hoped to do Cheesebox Canyon but having read up on the road access I’d decided there was little chance we’d make it across White Canyon in our car. Nevertheless we drove to Soldiers Crossing and wandered down the road to have a look. The White Canyon crossing was very rocky with sandy sections on either side and we figured even our Subaru Forester at home would have struggled… and Tom wasn’t keen on Kelsey’s cross-country route into the East Fork so off we went to Fry Canyon instead. Beta suggested wetsuits but that the water might be putrid. We decided some short swims didn’t warrant wetsuits – we didn’t really want stinky wetsuits to deal with after our last canyon of the trip. I was quickly chest-deep wet in the first section of the narrows. Fortunately in the sun it was a warm day. 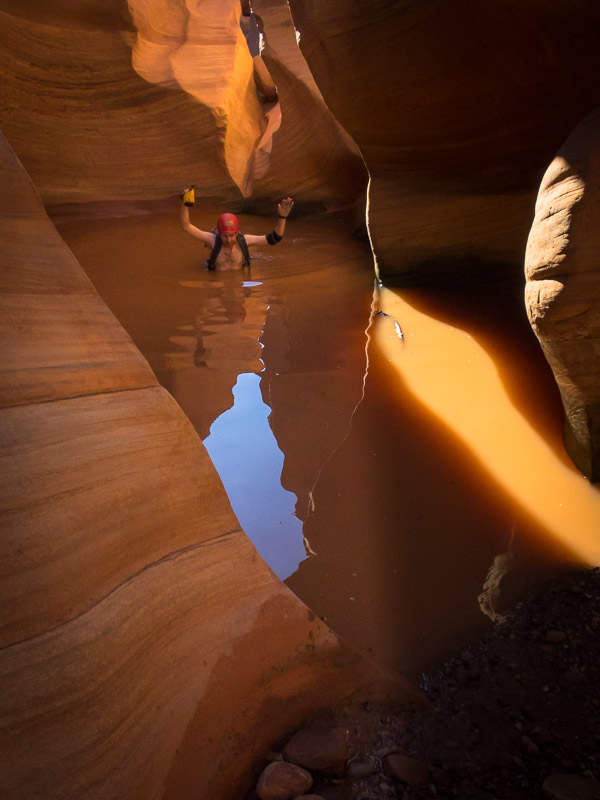 The second set of narrows looked like it would involve a lot of swimming. We stripped off dry clothes and rapped in. The water was icy and there was only a couple of places where I could stand in the 80 yard pool. Without my pack flotation I would have been struggling. 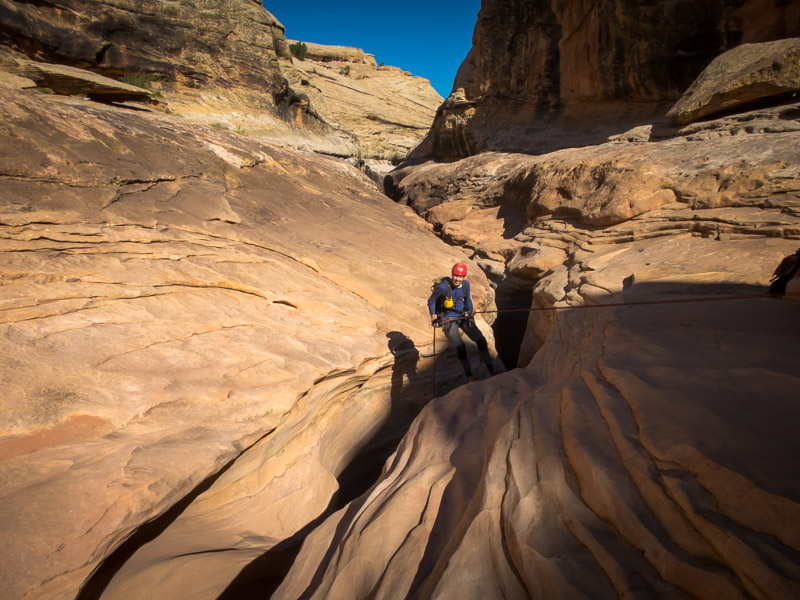 Abseiling into the second narrows in Fry Canyon 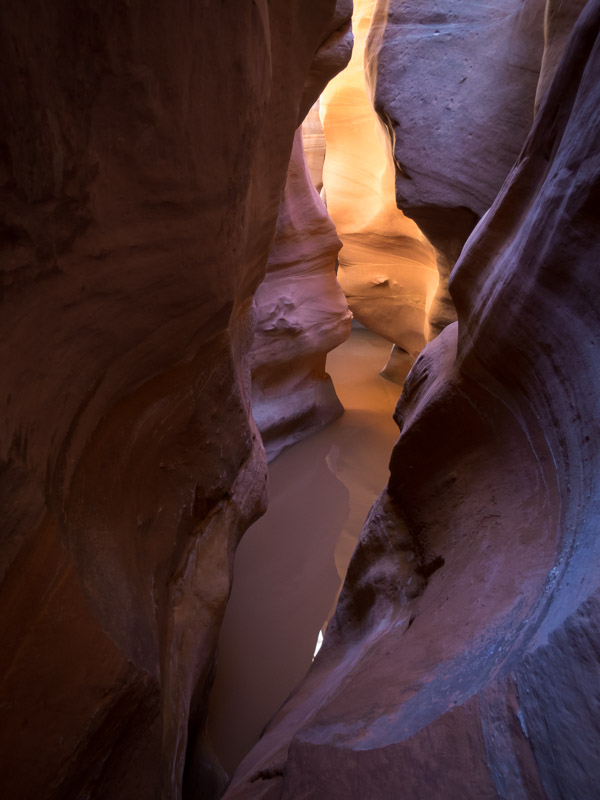 Beautiful… but definitely a swim!!

Tom prepping for the swim 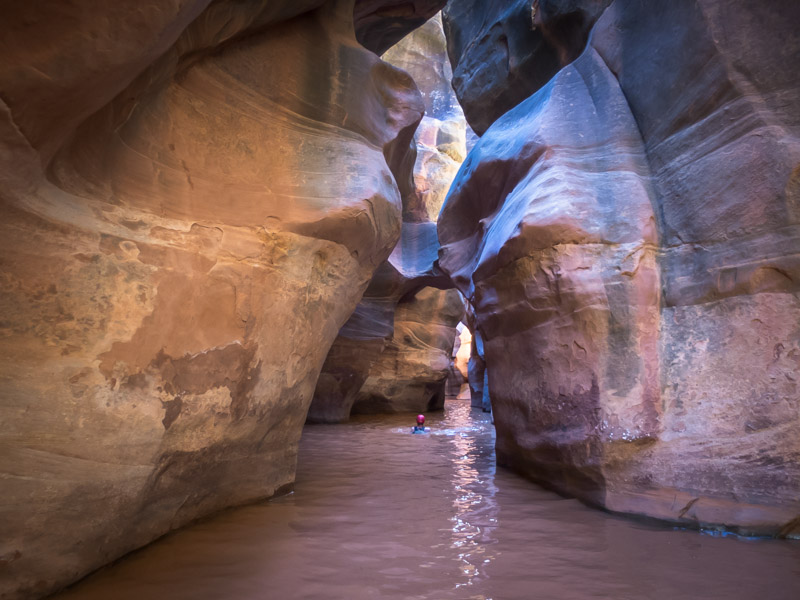 We were fortunate that the sun was streaming down at the end so could quickly warm-up. The narrows were beautiful. I wasn’t keen to find the moki steps that went down to the ruins so Tom had to settle with viewing them from the cliff above. While walking the rim back to the car we saw another group heading down canyon – made up of about 10 or so people, including several scrawny kids. They would have had been chilled to the bone after the swim! 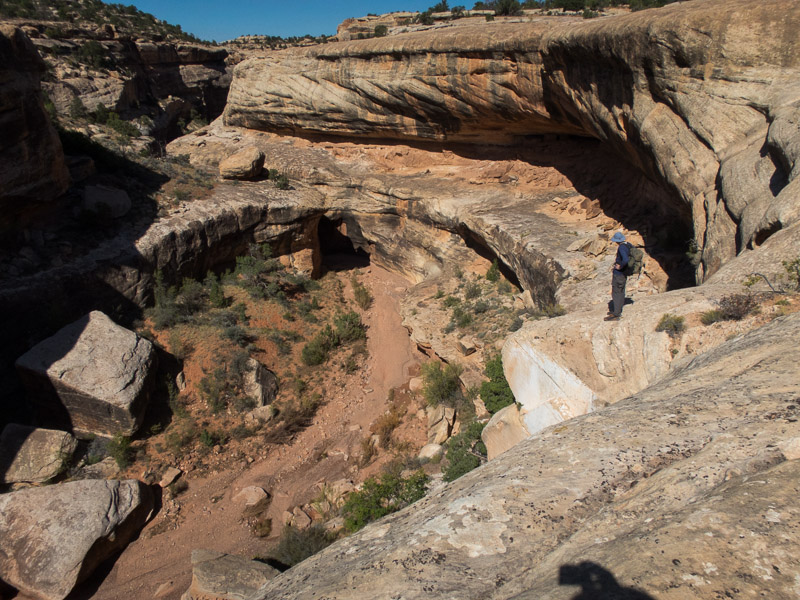 We had lunch at the Natural Bridges National Monument and did some of the short walks to visit the bridges. 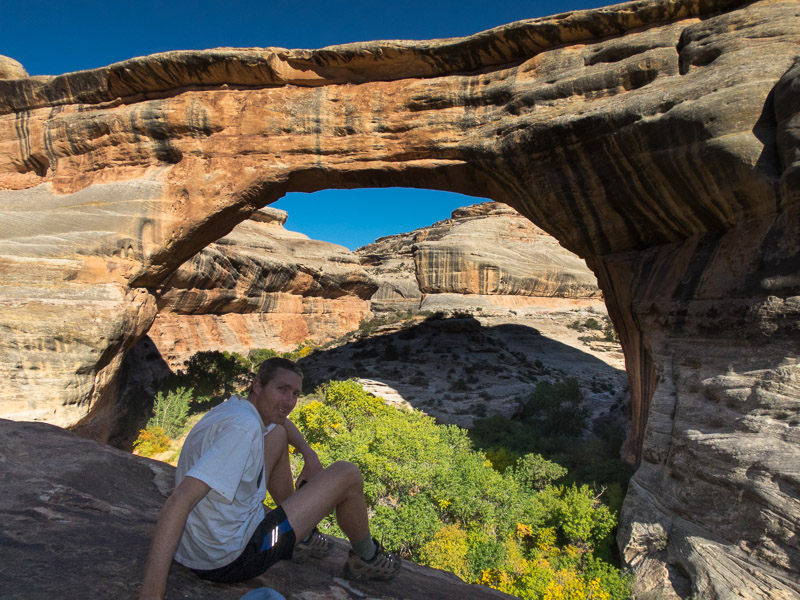 We didn’t have a plan on where to stay that night – dispersed camping options were few on the ground once we got into Arizona. Tom suggested Goosenecks State Park but after a horrendously windy night there on our last trip I vetoed that one. We ventured down the Moki Dugway again with stunning views in the late afternoon. I wasn’t unhappy once that was done and that was the end of any dirt roads for the trip. Eventually we got to Kayenta and found a motel room. After over a week without a shower it was bliss to be inside out of the elements and clean. We did cook on our gas stove in our room that night though. 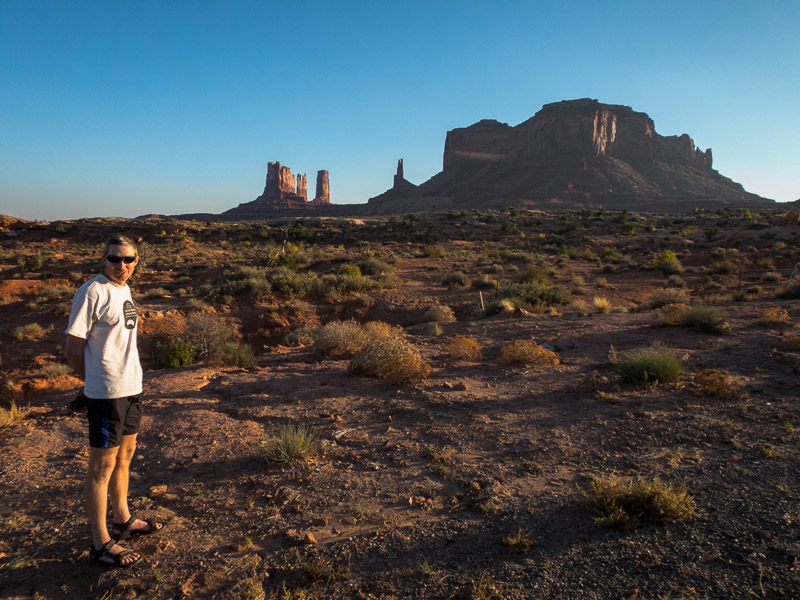 Scenic lookout on our way to Kayenta

We were into the ‘tourist’ end of the trip. We had a permit for a 3-day/2-night hike into the Grand Canyon but with Tom’s foot still not right we decided not to do it. Instead we had a night camped at Desert View Campground, and a night at Mather Campground on the South Rim. The night at Desert View was one of the coldest of the trip (and that was saying something). We mainly mucked about at the lookouts with the hundreds of other tourists, taking photos on dodgy cliff edges and trying to absorb the enormity of the Grand Canyon. 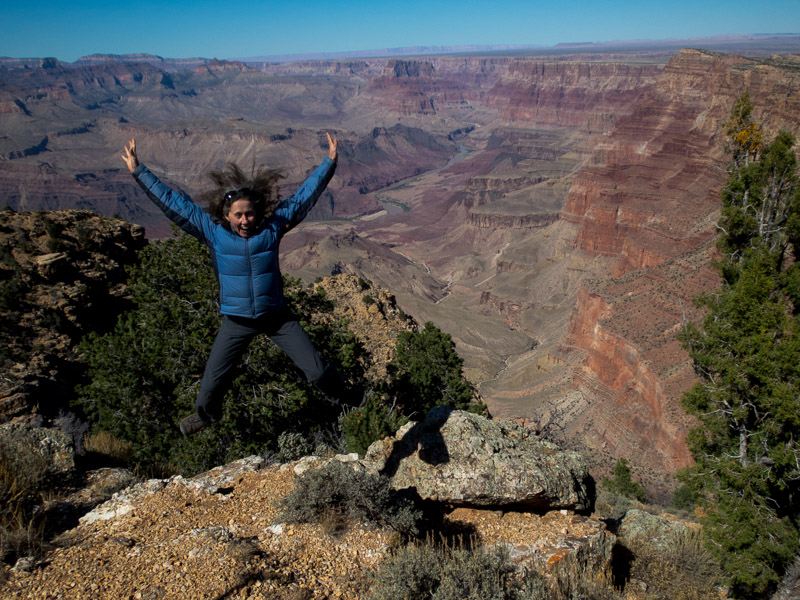 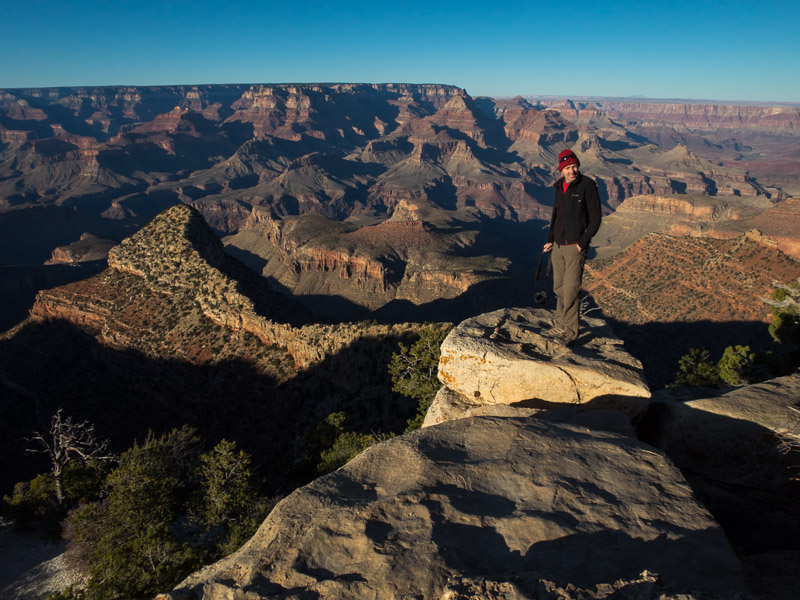 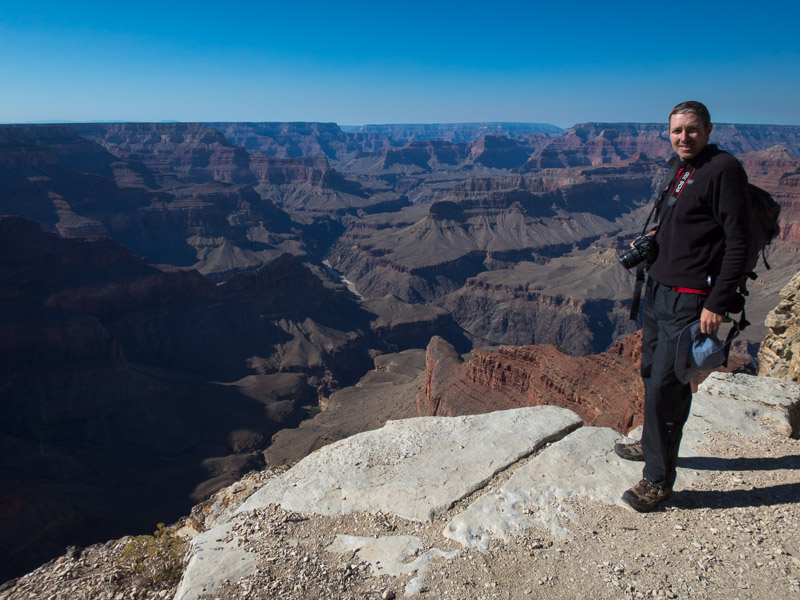 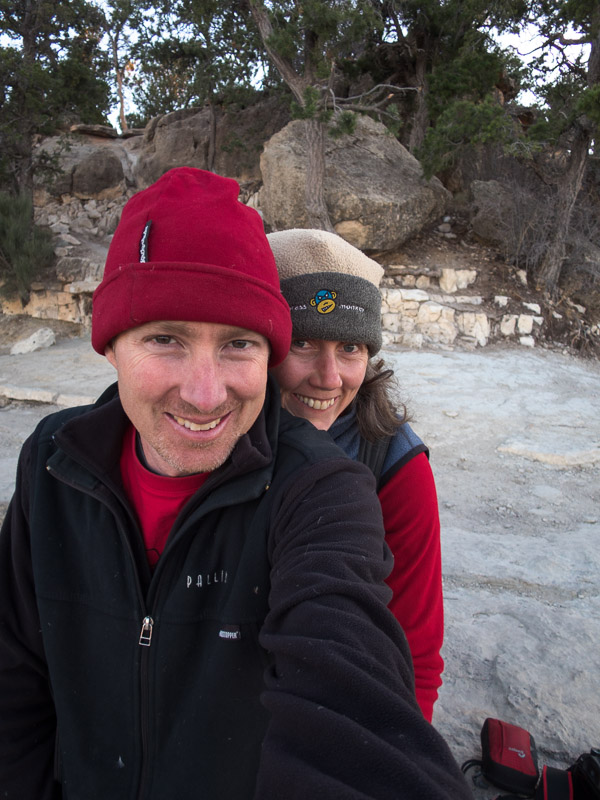 Watching sunset at the Grand Canyon 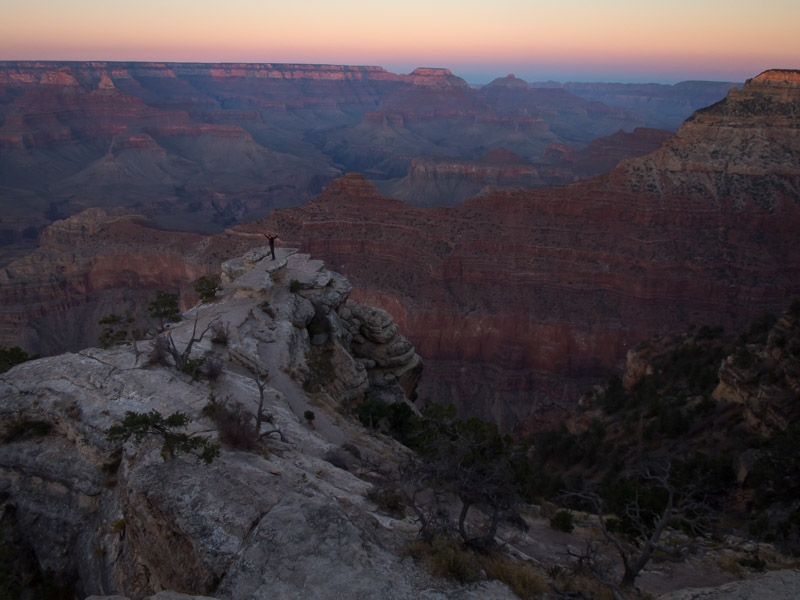 Sunset at the Grand Canyon 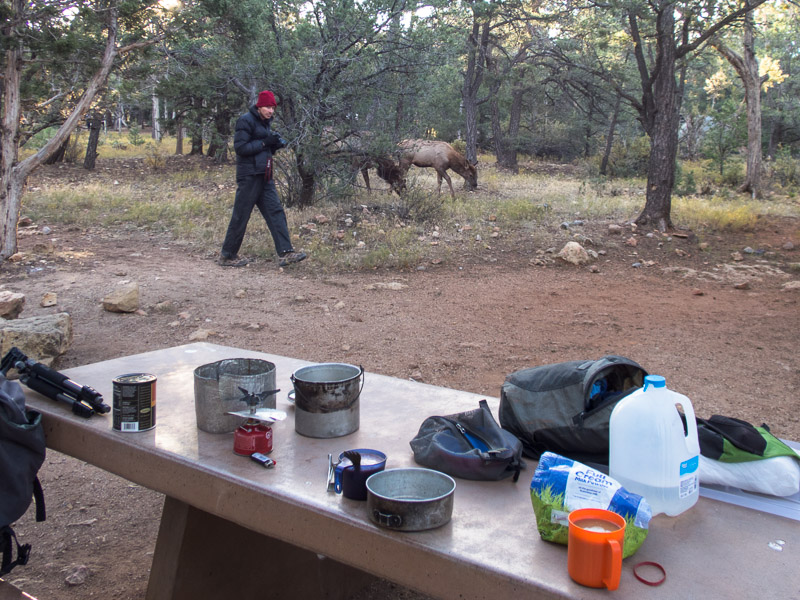 Finally we had two days in Sedona, where it was warm, and I managed to wear a singlet and shorts for the first time. We had lunch at Slide Rock State Park and had a go down the natural slide since we were there. The air temperature may have been warm but the water wasn’t! 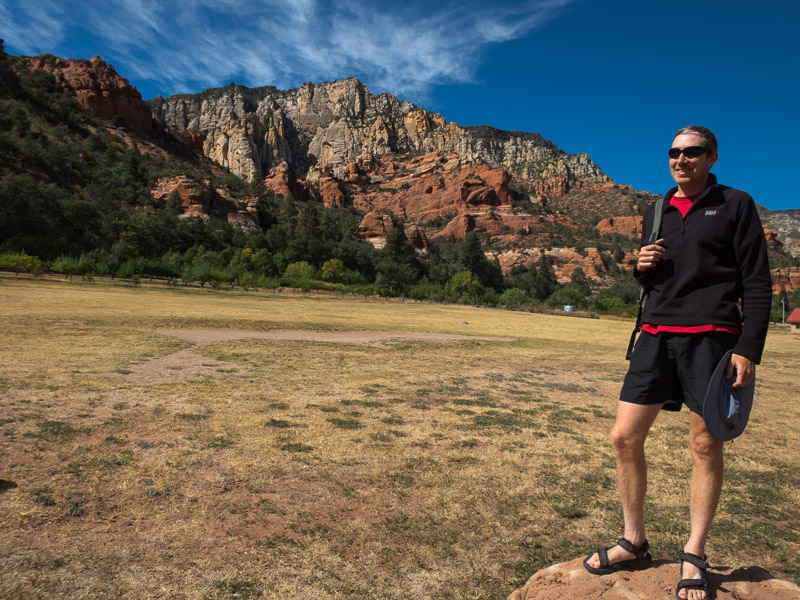 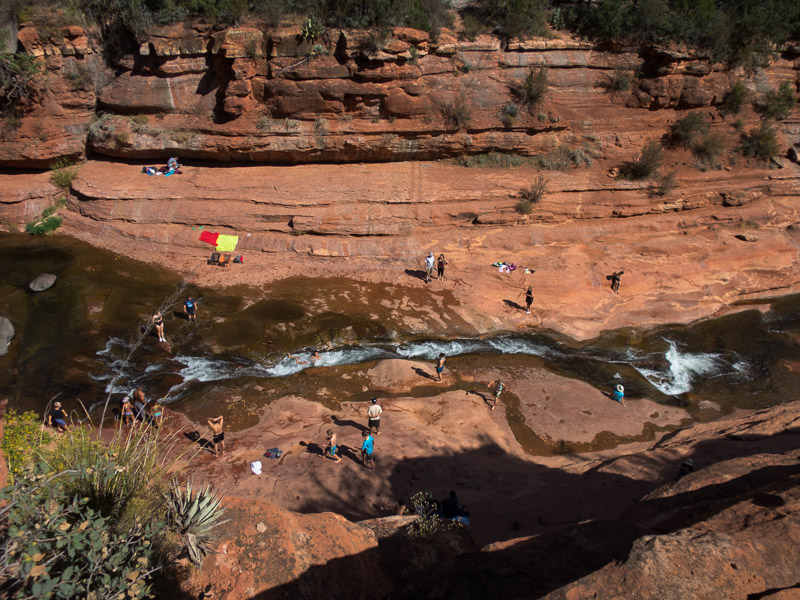 Tom was keen for some sunset and sunrise photography, and with lots of clouds promising a great sunset on the first night I led him on a dud walk up Doe Mountain. While we enjoyed the views it wasn’t the best photography spot. 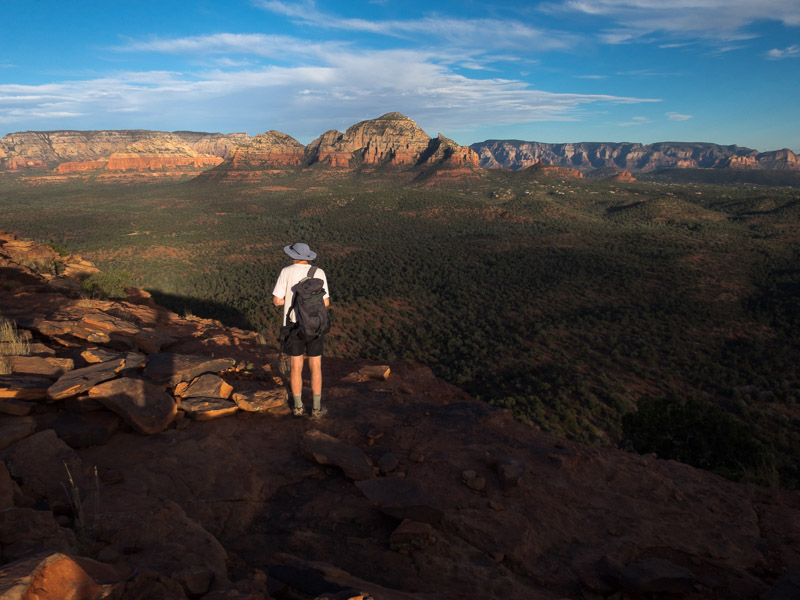 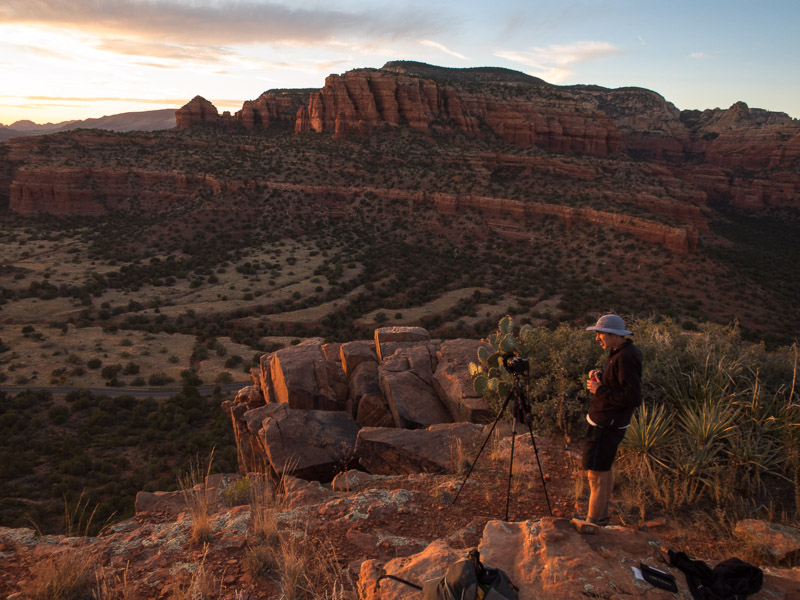 Compromise spot at the other end of Doe Mountain 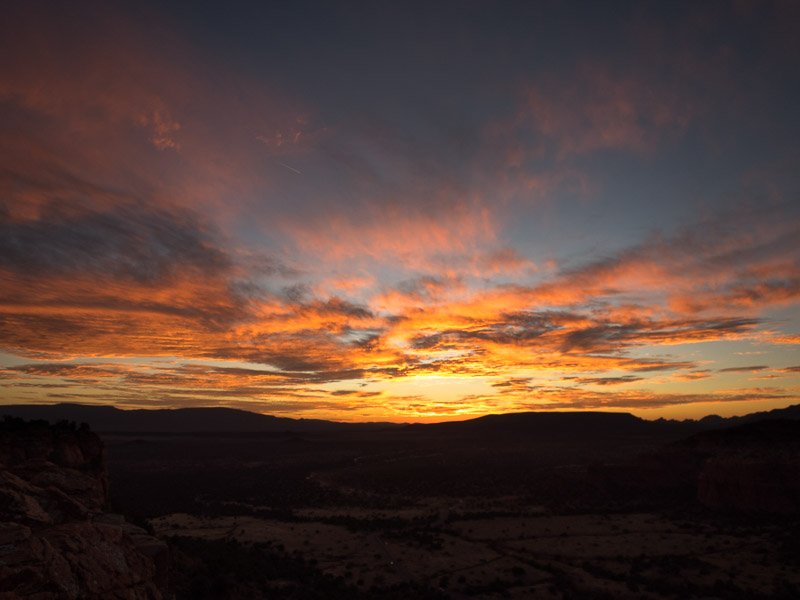 It was a stunning sunset! 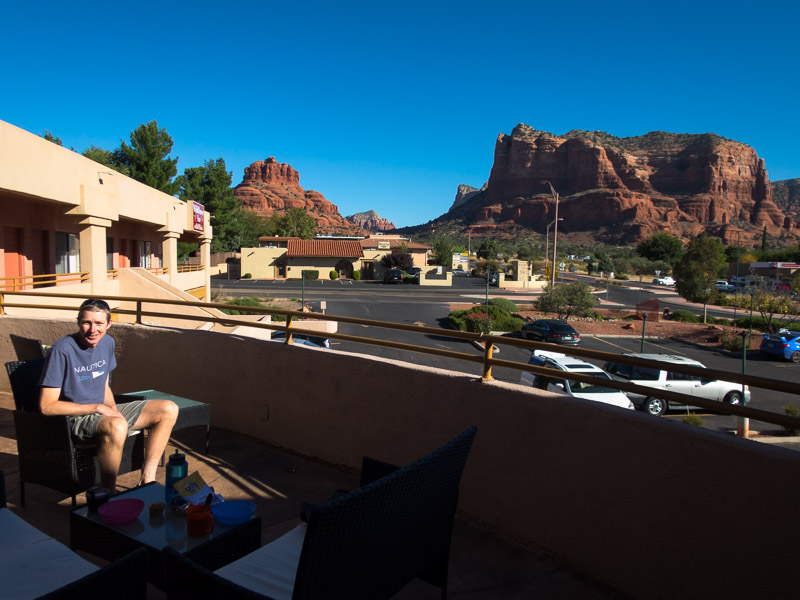 Views for breakfast from our motel in Sedona

The next day we hiked up to Brin Mesa, and then scrambled onto Brin Ridge for great views over the valley. 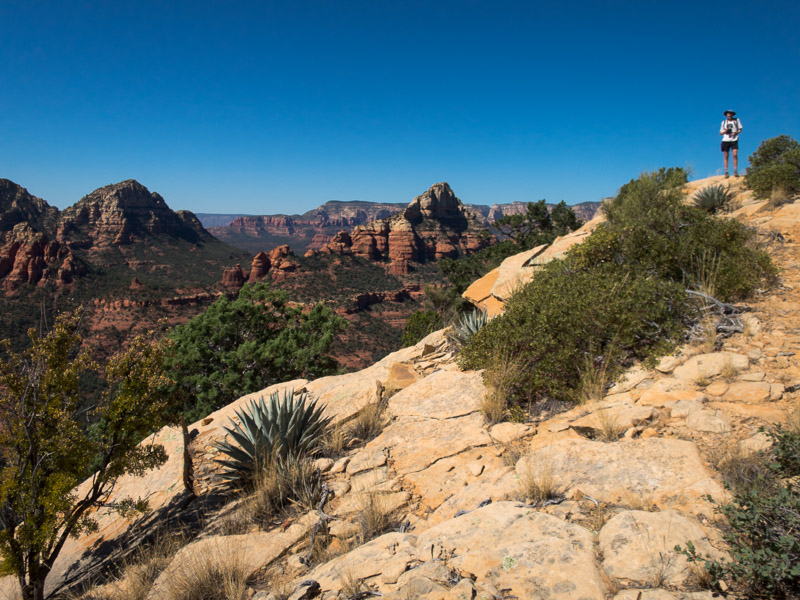 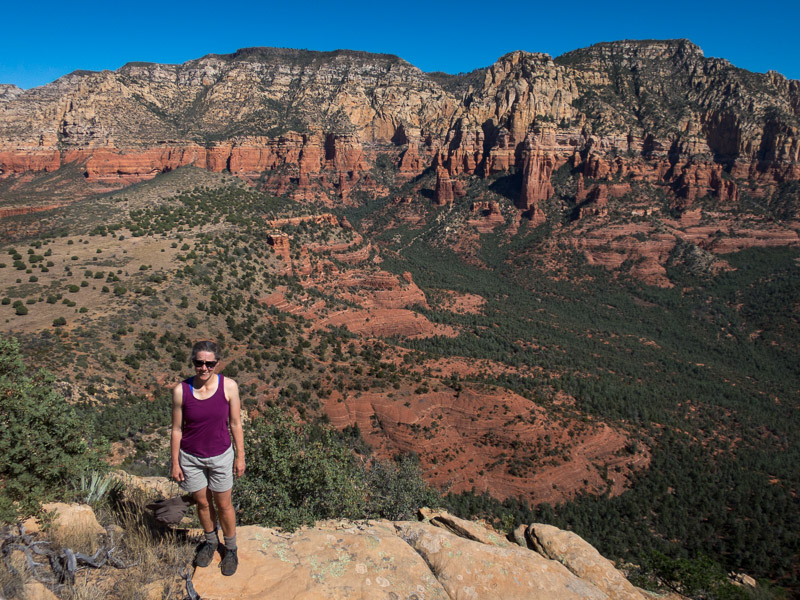 Finally we just had a long drive back to Las Vegas to make our flight out. We had a small amount of concern as we were flying via San Francisco, where there had been many flight cancellations over the previous 2 days due to the smoke from the wildfires across Northern California. Fortunately we made our connections and were very glad to get home.