As seemed to be the case almost every day on this trip we started the day with a stiff climb. I was surprised how quickly we exited from the bush and started getting views. The weather was amazing and I was thrilled we had been able to sit out the previous day – I couldn’t help but think of the 9 others who’d left Lonely Lake yesterday who probably didn’t get any views.

Once we left the bush line we followed dramatic ridge after dramatic ridge. Views in every direction! Valley cloud – Tom’s favourite! So many photo stops. 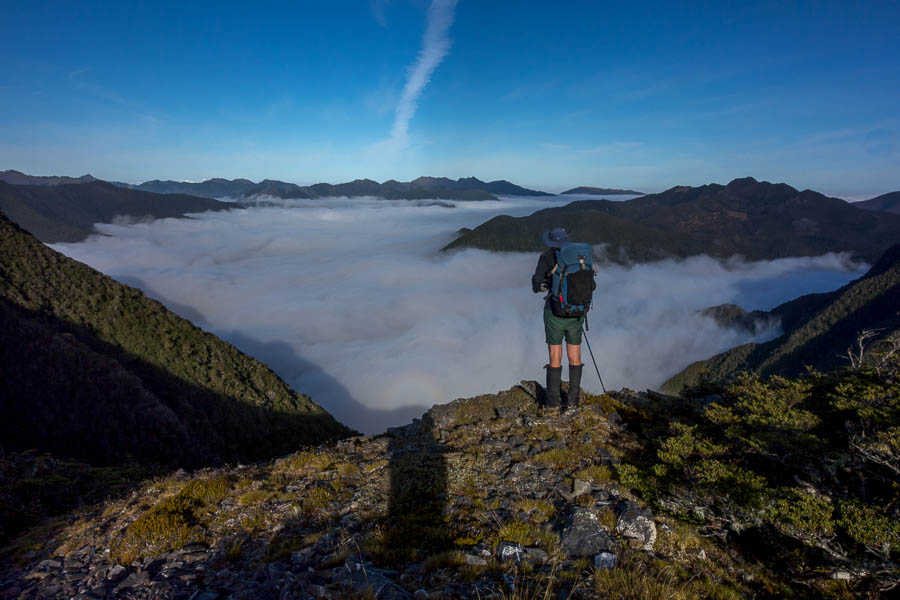 Valley of cloud – can you spot the Brocken Spectre?

Approaching Lonely Lake from the north we didn’t get a view of it until we were almost in it. Whereas if you approach from the south you have many views from quite a way out. 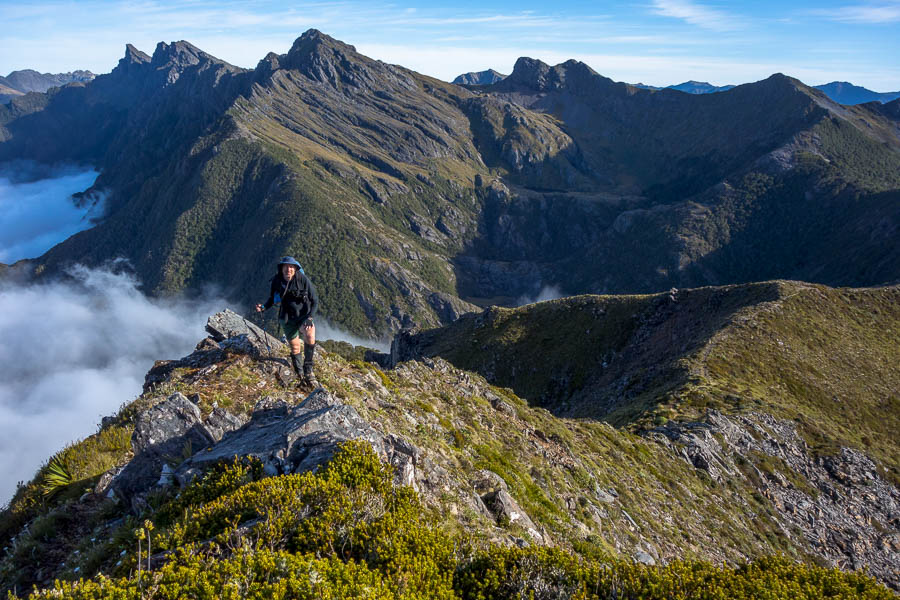 Looking back – Lonely Lake the hanging Lake on the mid-right, Dragons Teeth prominent back left

There were some less than pleasant sections. In particular going over spot height 1610 – this was our first encounter with Golden Spaniard (aka speargrass) for the trip. Up until then I’d been pretty comfortable grabbing hold of whatever vegetation was in front of me when I felt the need. No longer. Some particularly pathetic yelps came out my mouth as I managed to get Golden Spaniard spikes into the scrapes on my knees from the previous days.

All in all this was a magnificent day of walking – but not a good one to do in bad weather. There was still enormous exposure in some sections – and at times I was a bit uncomfortable, I do like having three points of contact and when you’re just walking on a narrow ridge top you only have two! 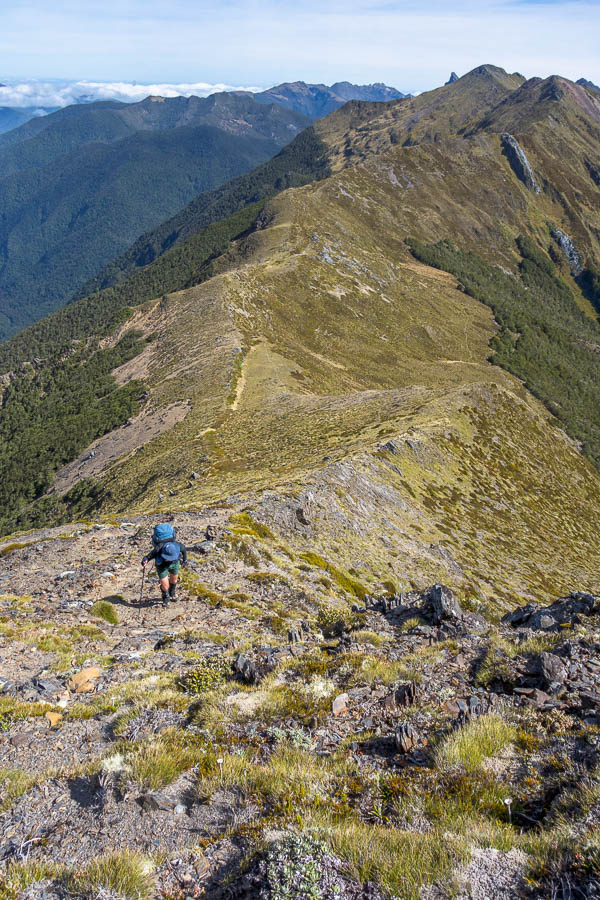 Climbing the slopes of Kakapo Peak 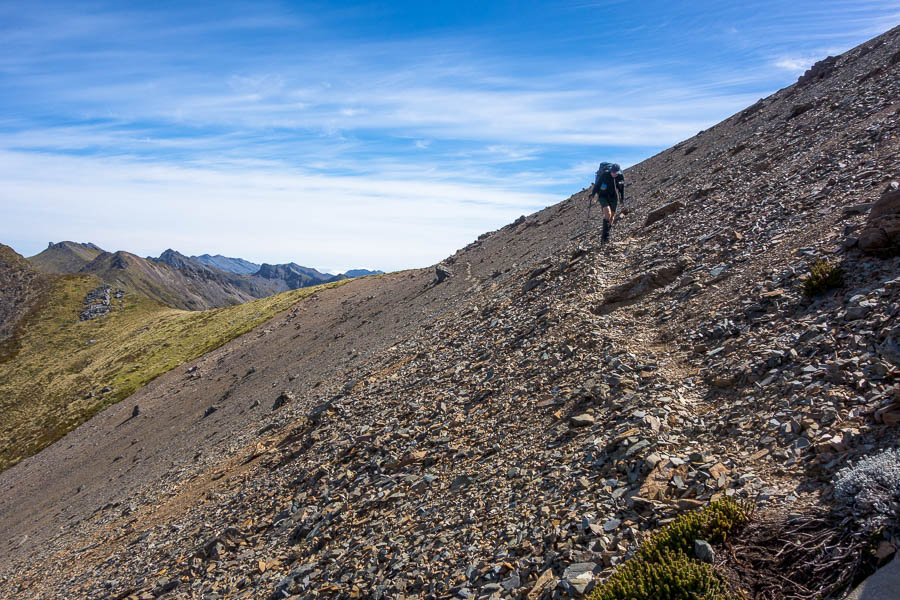 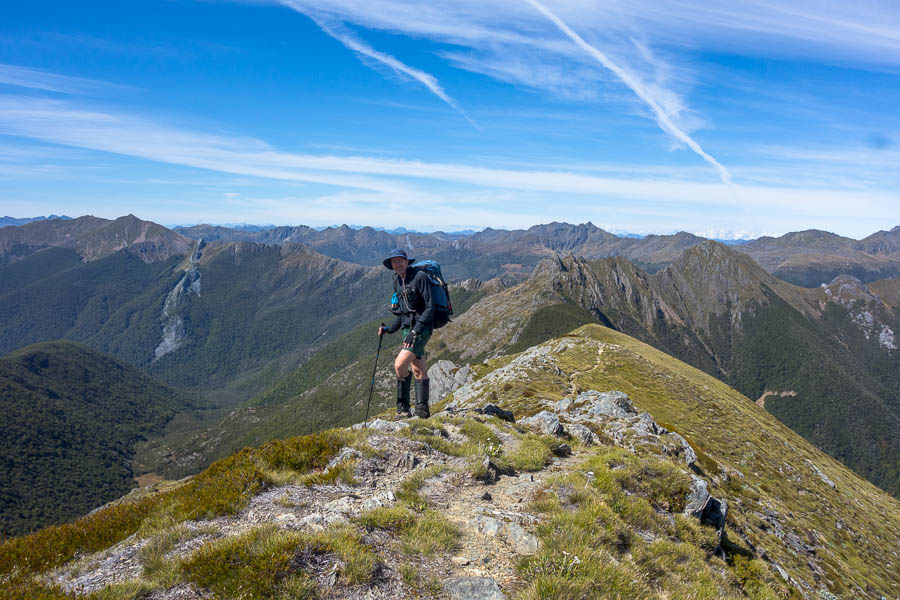 A new view! (towards the Cobb Valley) 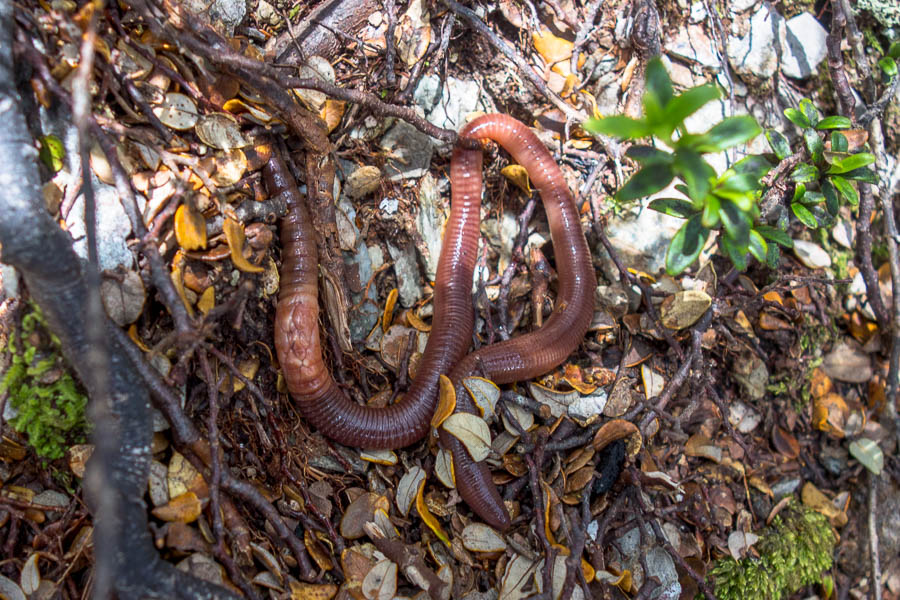 I saw a few of these through the trip

The closer we got to civilisation (Fenella Hut) the more elaborate the cairns became. Then we started bumping into people. Aagh! 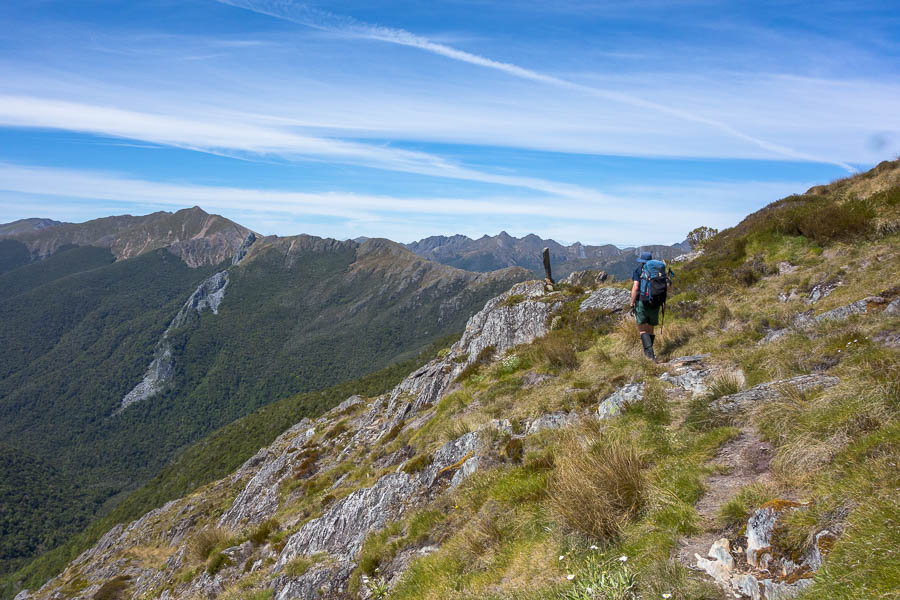 Someone went to a lot of effort with that cairn

The sidle around Waingaro Peak was surprisingly taxing – maybe we’d mentally switched off by that point thinking we were almost done. 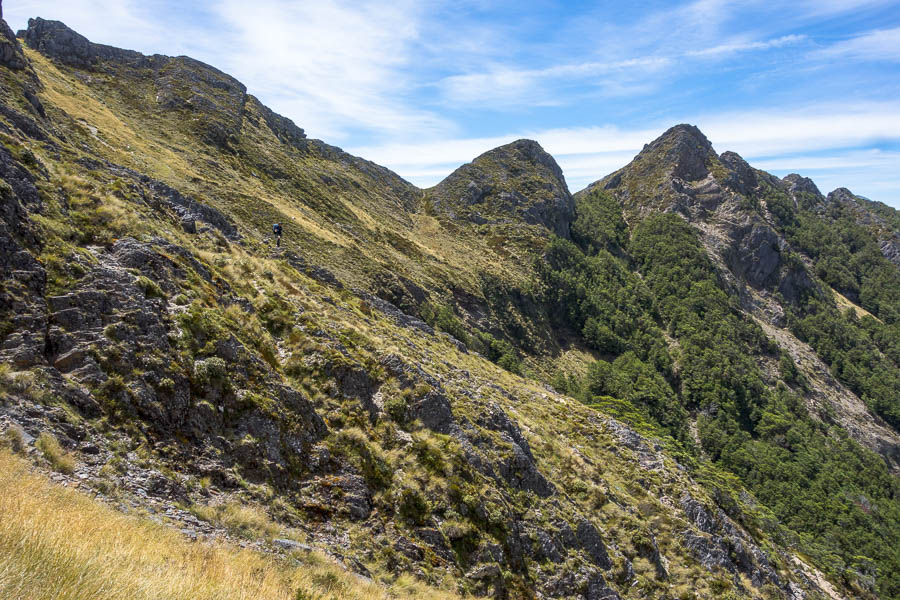 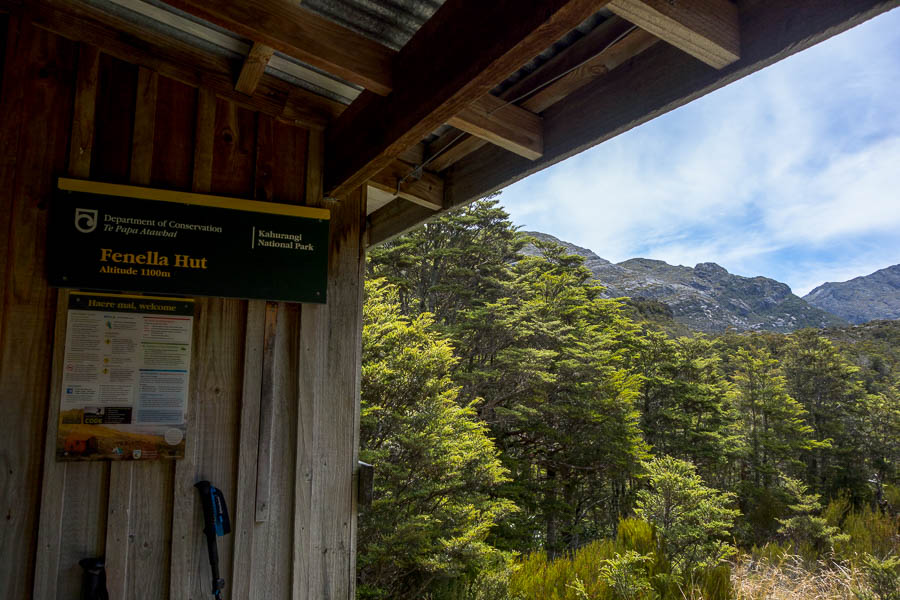 I got more sandfly bites in the first 10 minutes at Fenella Hut than I had in the rest of the trip. We soon retreated inside to escape. Then we walked the “2 furlongs” (400m) to the swimming hole. The write-ups had made a big deal of the swimming hole and with good reason. A tarn perched on the ridge-top with easy access on rock in and out, deep & long enough to swim laps in it. Amazing. 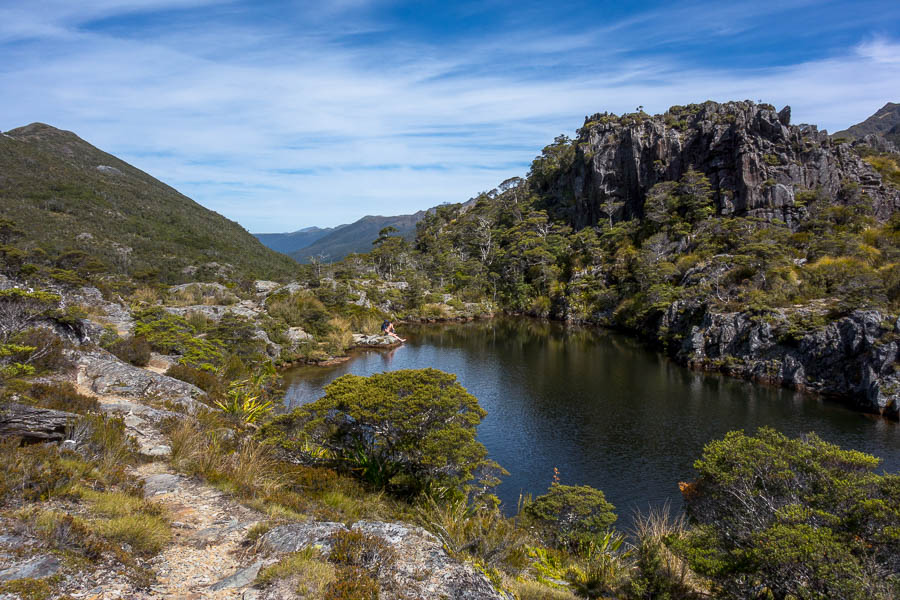 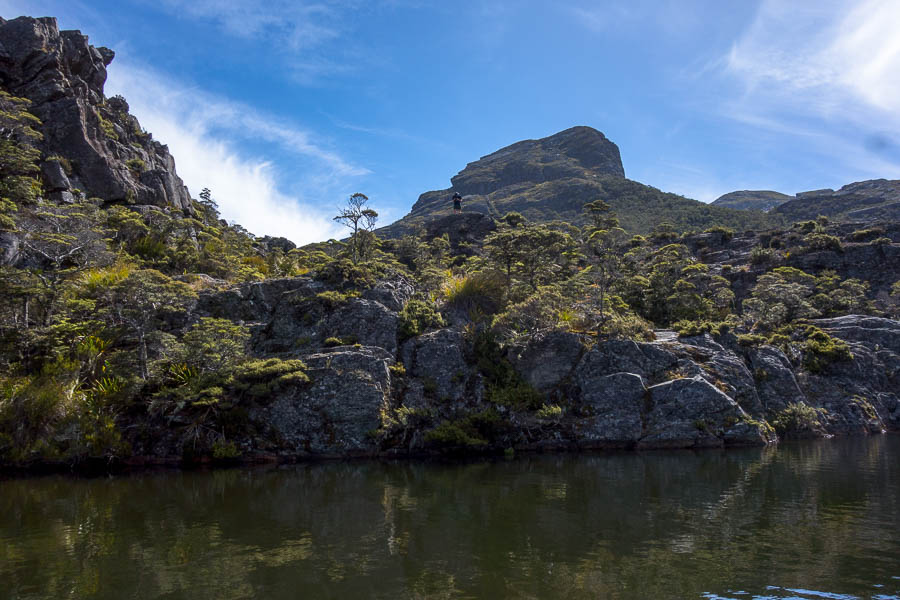 Tom with Xenicus Peak behind him

We had been a bit concerned about how busy Fenella Hut was going to be. There had been 12 people there the night before. Neither of us sleep very well in huts with other people, maybe we’d get used to it if we did it more? So even though there only ended up being 6 others we decided to set up the tent. It ended up being a good call as we both had the best night’s sleep we’d had on the trip.

That didn’t stop us socialising with the very chatty group that were in the hut. Three of them had come down from Auckland specifically to spend New Years Eve with Nelson-based friends. One problem – the local friends had not been at the trailhead when they arrived and had not turned up in the 3 days they’d been staying there. We got introduced to the blocks of cheese – Zoe and Zac – named after the missing friends. There was a fire sale that night on all the spare food which had been carried in for them.

Since we still had an extra day up our sleeve (thanks to the amazing weather) we opted for a second night in the vicinity of Fenella Hut.

We had talked about getting up early to do a day walk – mainly to try and get some of the walking done in the early morning before the sun got too intense. But when I looked out the tent there was low cloud so there didn’t seem to be any hurry. Eventually we got up and it looked like the cloud was going to clear so we got going.

I was expecting to feel like I was bouncing up the hills with only a day pack. Sadly that was not the case. The 500m ascent to the Mt Gibbs ridge was just as hard as any other climb we’d done (if not worse). 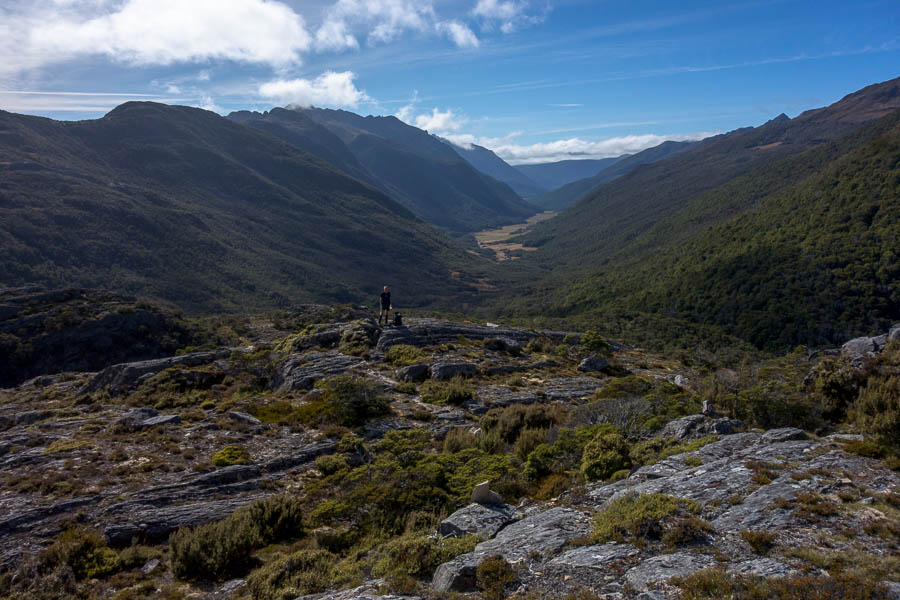 Views down the Cobb Valley – our exit route the next day 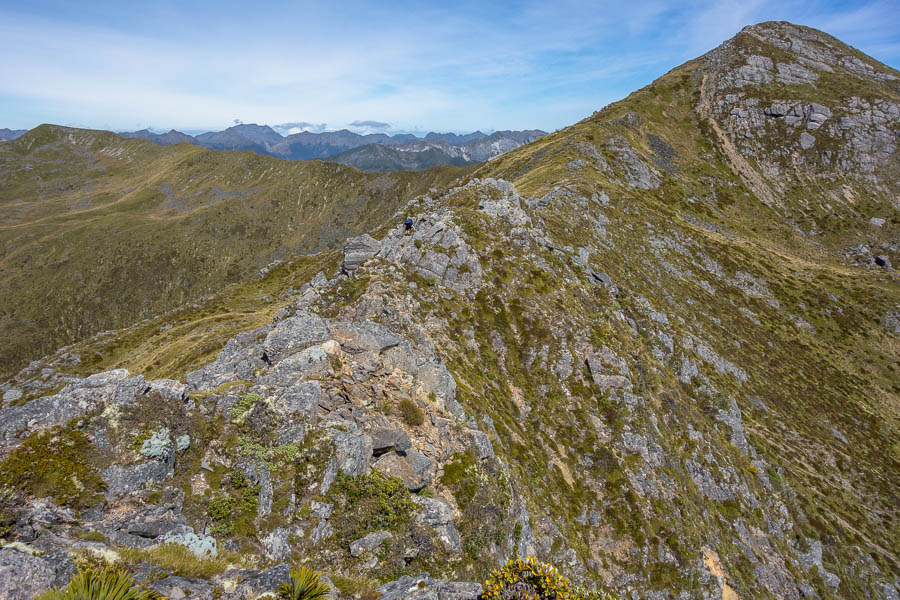 It turned into another stunning day, and we enjoyed our two morning teas. One overlooking Xenicus Peak from the end of the rocky ridge before the saddle, and the other after summitting Mt Gibbs, overlooking Island Lake. 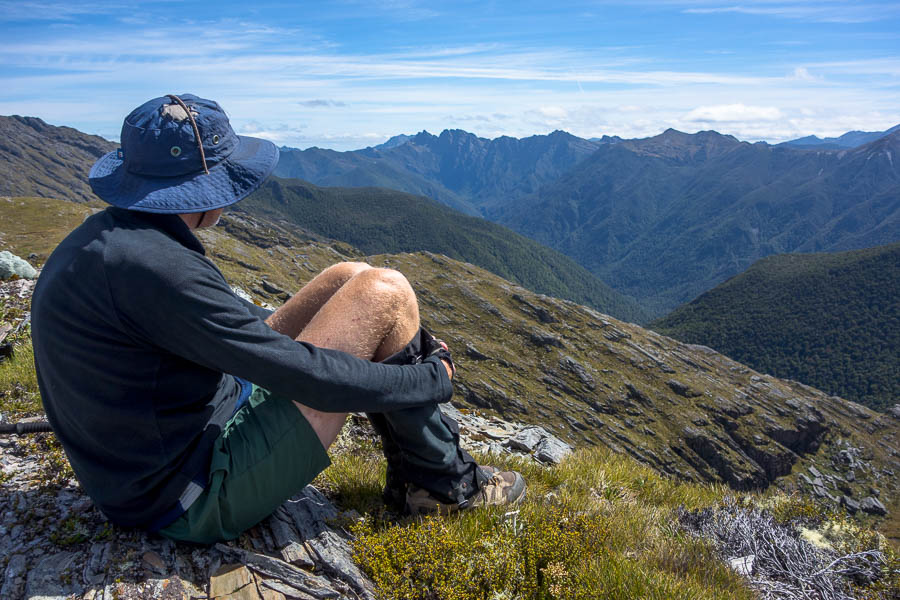 Contemplating what we walked over the previous 7 days 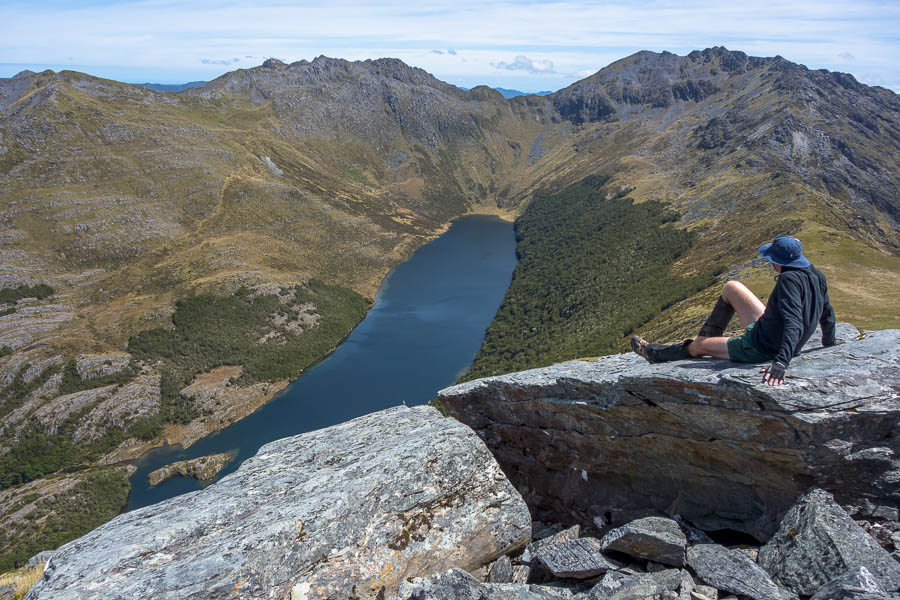 By comparison our lunch spot at Round Lake was a bit boring. 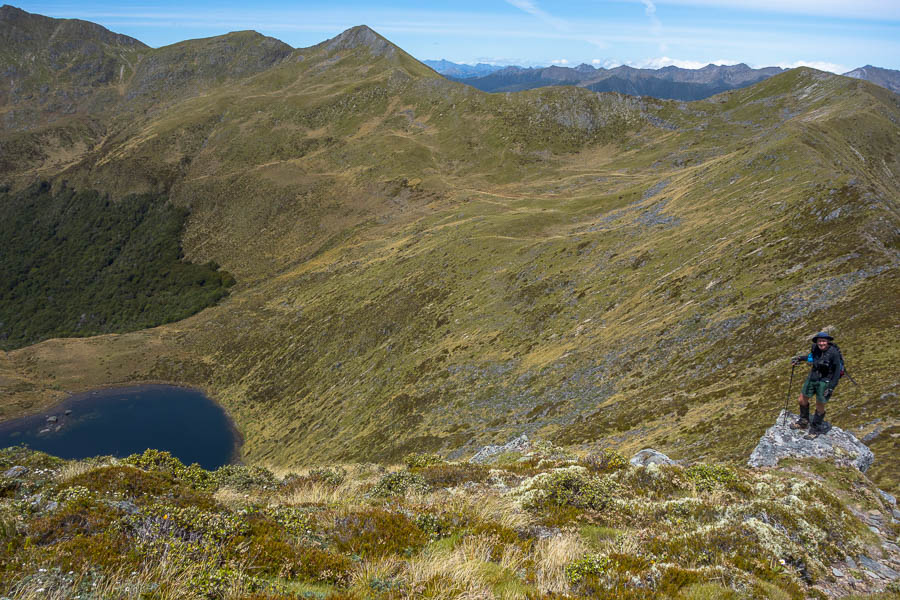 Descending to Round Lake

We’d considered moving into the hut for our second night to avoid having a wet tent to pack up in the morning. However as more and more people arrived that didn’t happen. The second night had 11 or 12 in the hut, and 5 (including us) camping. One group of 5 had come over the high route like us and we enjoyed debriefing the trip with them. Another adventurous couple were on day 10 of a 15 day circuit around Kahurangi and they were now needing to rush the Douglas Traverse (low route) to try and beat an incoming severe weather system later in the week.

Even though our pick up wasn’t scheduled until 1:30pm we decided get away early-ish so we weren’t under any time pressure on the walk out. 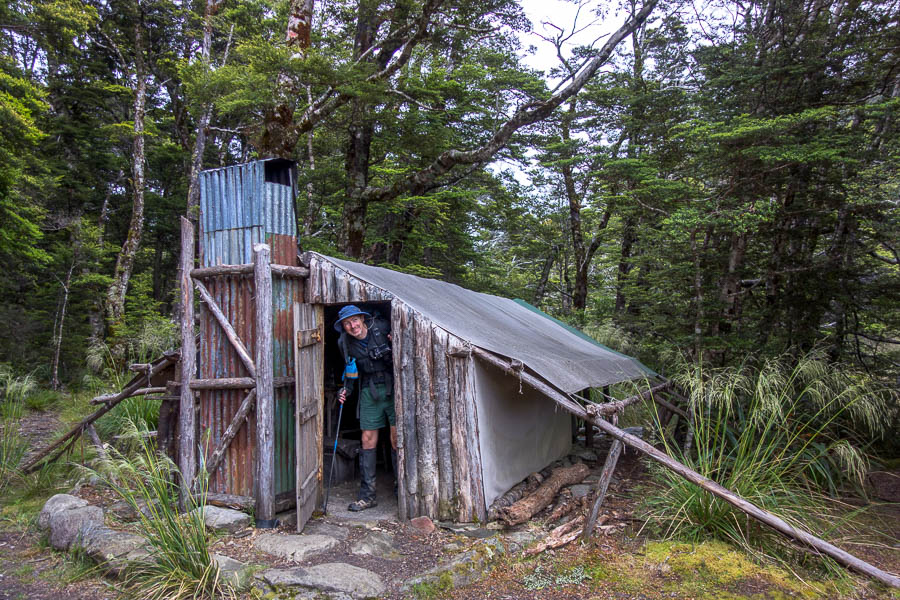 The historic Tent Camp on the walk out

The first couple of hours were dry but eventually, in a first for me on the trip, we had to put our raincoats on. It was pretty incredible that for a 9 day trip that was the only time I used my raincoat. There had been rain on a couple of occasions earlier but it was either overnight or on our rest day. 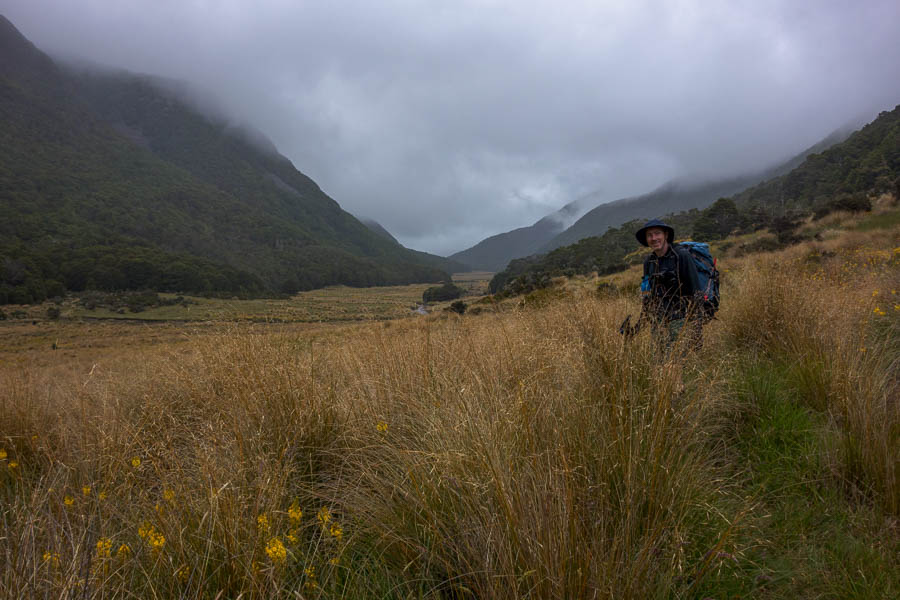 Hmm, do we need to get the raincoats out?

Since we seemed to be making good time we did have our customary two morning tea stops. At the first one a robin came to visit. It was very bold and eventually started pecking Tom’s pack! 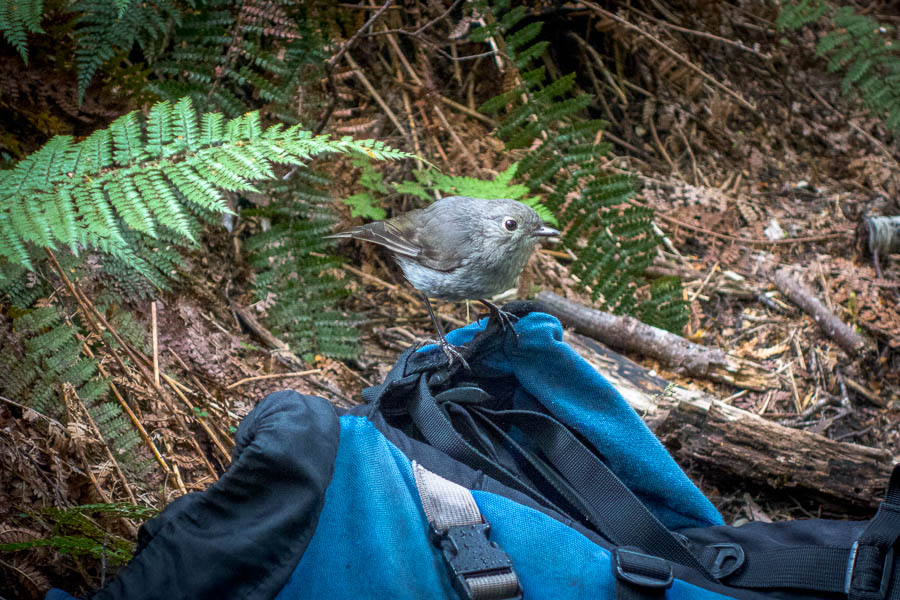 Even with our two breaks it only took 4 hours to walk out which meant we had ages to wait for our pick-up. The group of 5 that we’d enjoyed chatting with the previous night arrived and hung around for a while so that helped pass the time. And it turned out there were 2 others also waiting for the same shuttle. They were an interesting couple based in Westport who had a lot of local tramping knowledge. 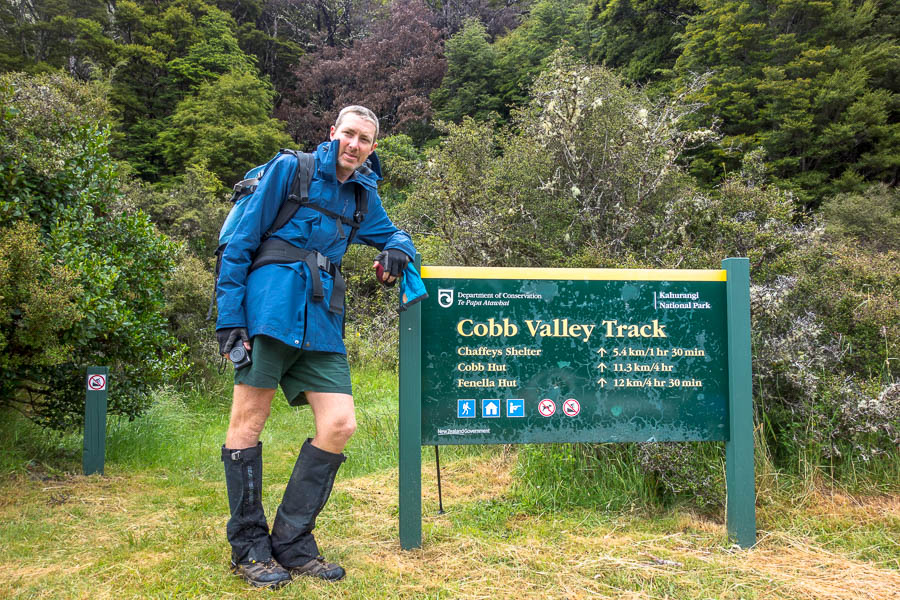 Bang on 1:30pm our shuttle arrived dropping off 2 people and collecting 4 of us. As we chatted on the way back it transpired the two people who had been dropped off were the infamous Zoe and Zac – they had made it just a day after their friends had left!

A few hours later we were back in Nelson well satisfied with an amazing trip.