Another plan made at 9:45pm the night before – which was a bit unfortunate as this would have been a good walk to invite some other people along on.

My research indicated a number of people on the interwebs had trouble finding the start of this walk and/or following the route once on the ground. There are several minutes of my life I will never get back. Much like a car crash you can’t look away from I started reading a blog which detailed 3 attempts (the final one being successful) on Mt Jellore – along with blow by blow conversations held during the drive there and while walking. I hope my blog readers don’t find my writing so tedious.

We had no issues deciding where the walk starts (though it is not sign-posted) and then finding our way through the mess of fire trails which punctuate the start of the walk. To be fair, it’s probably a lot easier now that the bush has come back after the fires. Tom noticed when we arrived that openstreetmaps had a loop option drawn, so we decided we’d try and do that rather than the usual out and back.

The surrounds were lovely and the sun was out. Early on we came upon a look out which was almost excellent. Other than Mt Jellore being directly behind the trees! 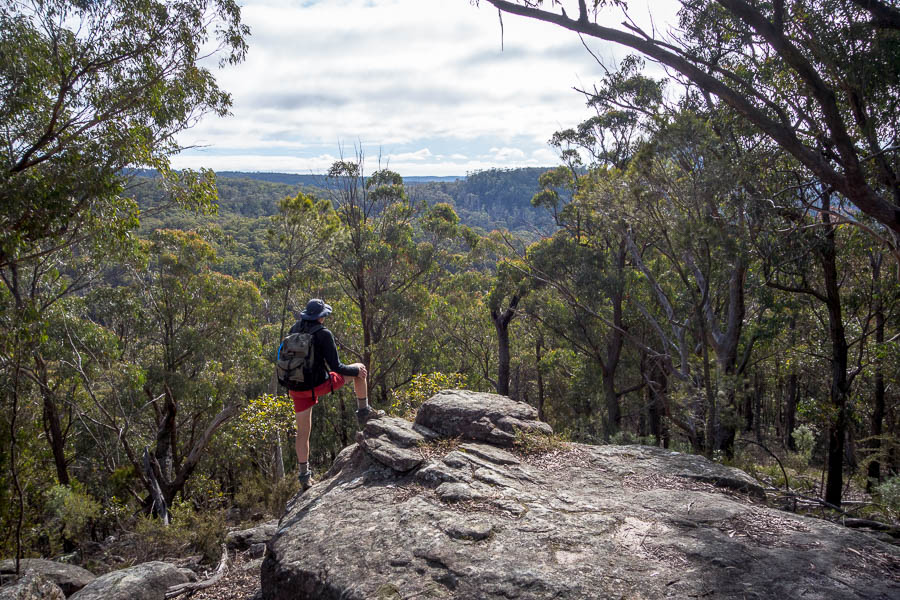 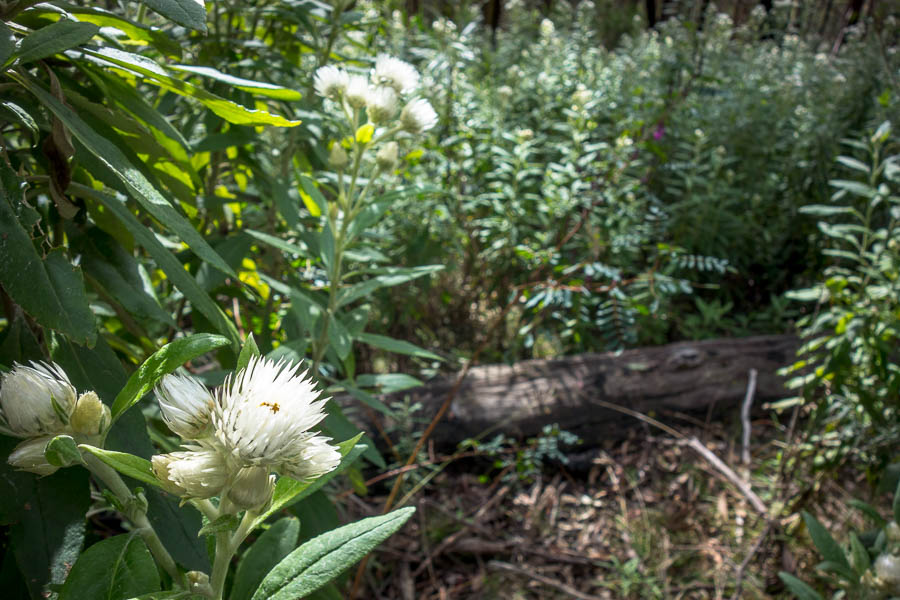 A sea of paper daisies 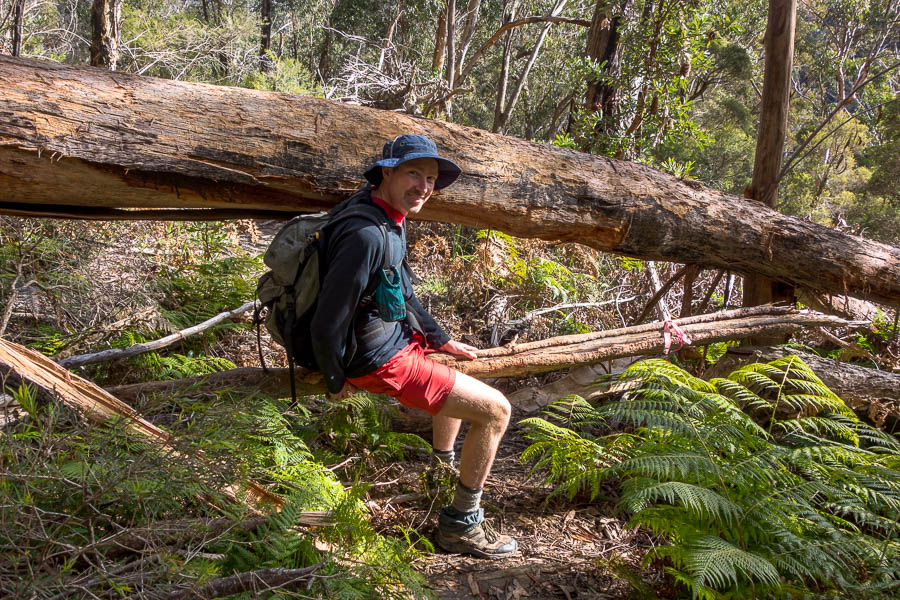 A few obstacles on the track

I had read about the creek crossing having ropes on both sides. We didn’t use them but I can see why you might want them, particularly in wetter conditions. The way the track has formed in this section is not ideal – straight up and down on each side. A re-routing which goes across the slope would alleviate erosion and remove the need for ropes.

Now that NPWS has taken over management of the area (rebranded as the Jellore Flora Reserve instead of Jellore State Forest) it would be nice if this walk became official – perhaps in the lead up to that the track could be re-routed. Of course, I doubt this is anywhere near the top of the priority list!

It was impressive how many sizeable pieces of sandstone had been put across the old 4WD tracks leading off Soapy Flat Road, so there’s definite evidence of attention being paid to the area. 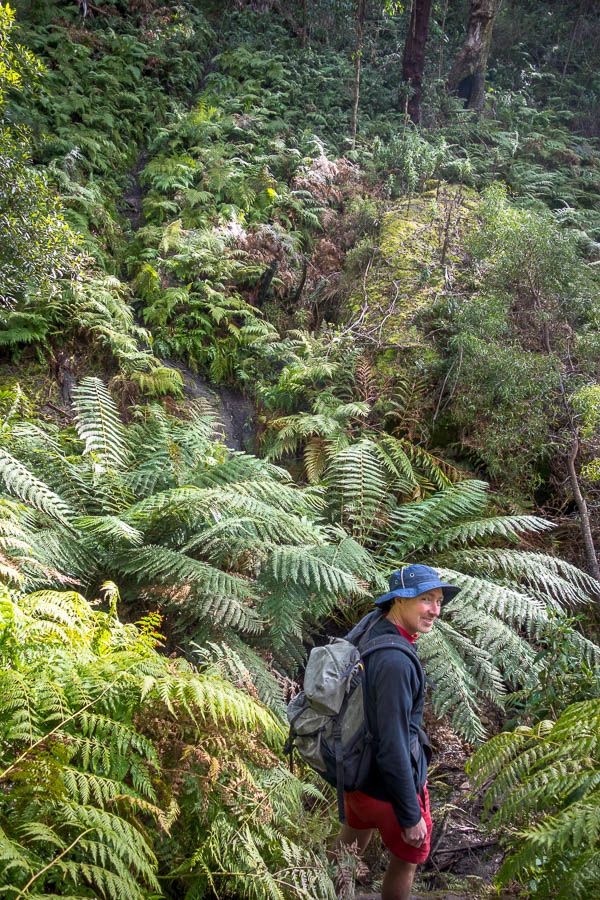 Approaching the creek crossing – not an ideal track route 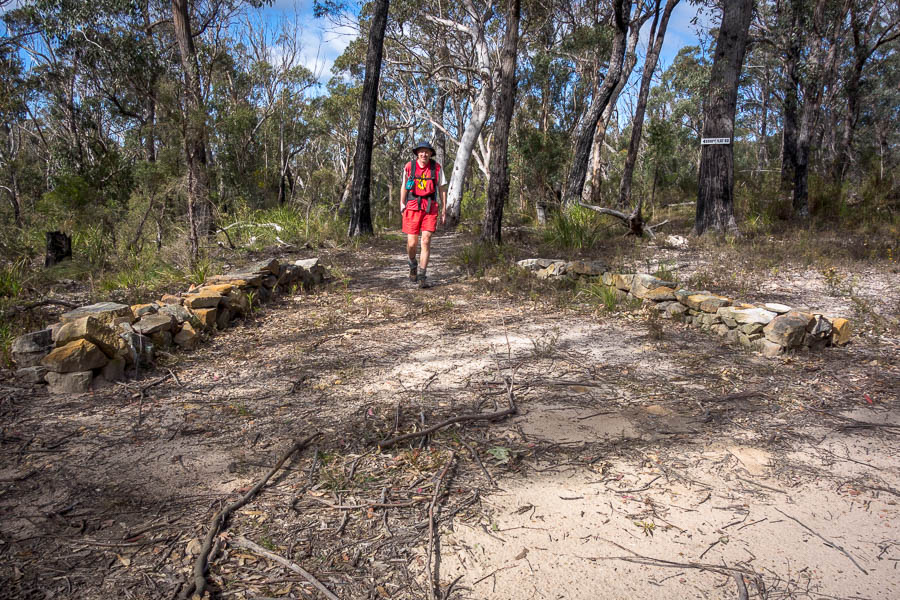 The road which avoids private property 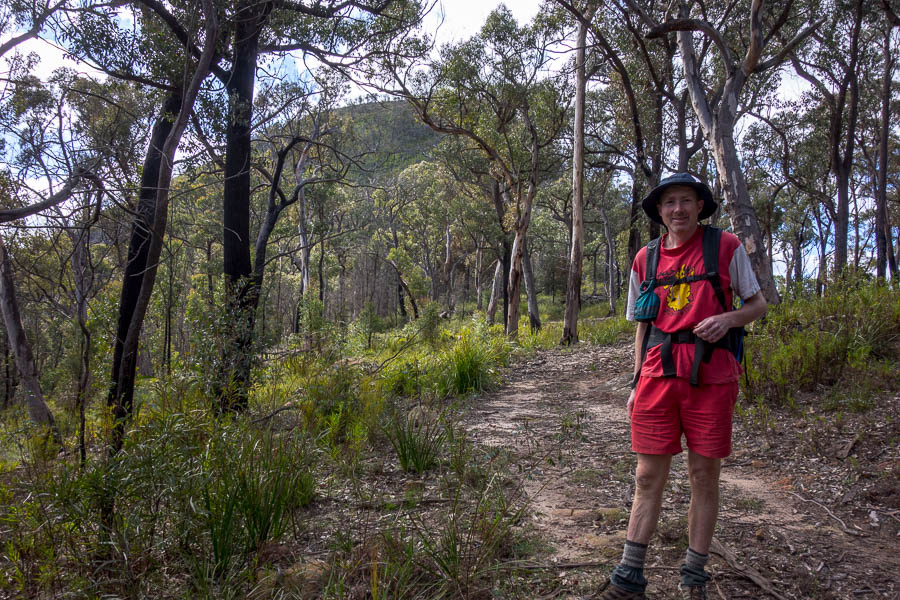 Tom wanted to check out where the loop route went off before we climbed Mt Jellore. While we were looking for any evidence of the route I found a cairn. So we thought that might be the start. Until I looked more closely and found a geocache – not that we could get the lid off. 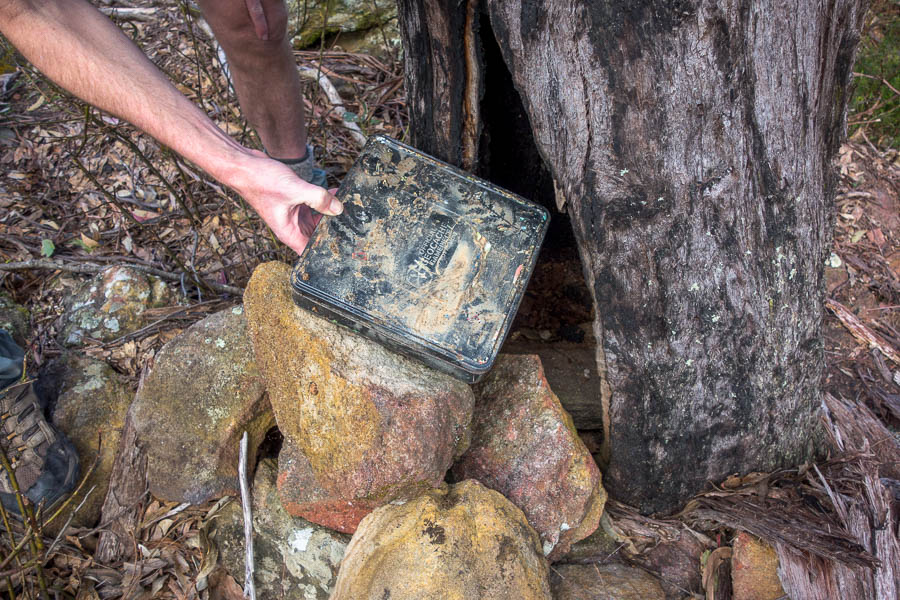 We weren’t intentionally geocaching but look what we found

I was somewhat surprised to find the side of Mt Jellore was quite cliffy – I had expected it to be completely rounded. Fortunately the track just works it’s way up the slopes, and other than early on in the climb, does a decent job of switch-backing through to the top. 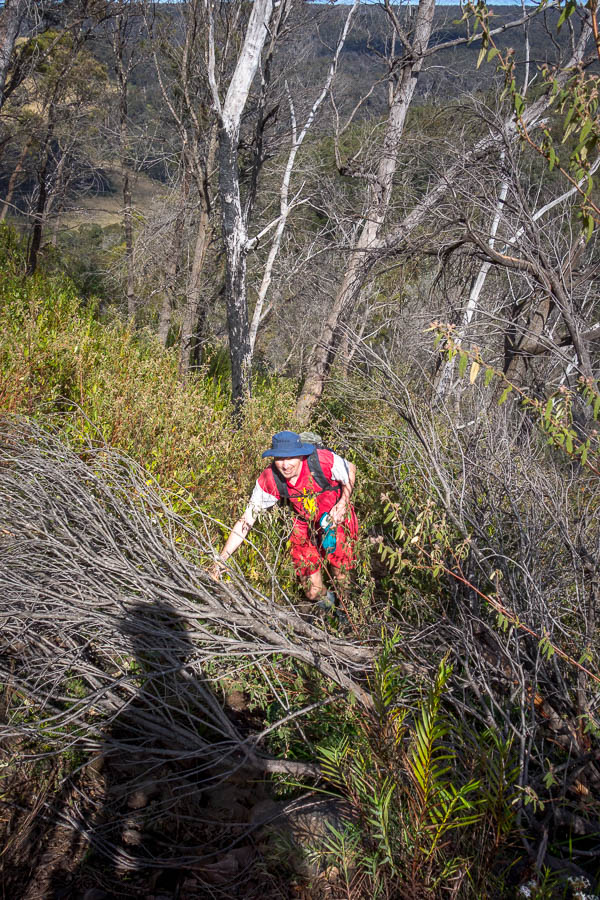 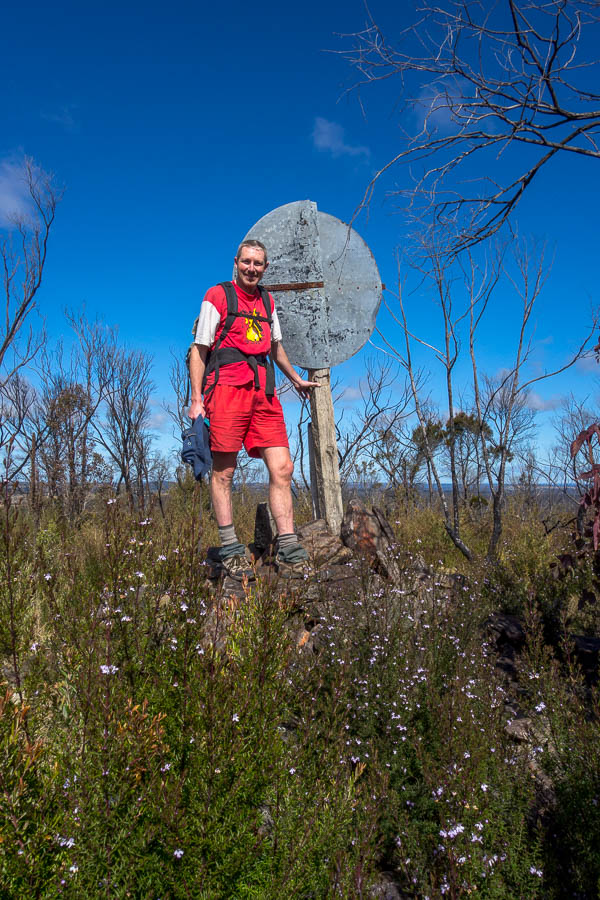 Mt Jellore was the first trig station in NSW – established in 1828. Mt Jellore was chosen because it’s such a distinctive peak. Having seen it from so many places it was great to finally get on top. 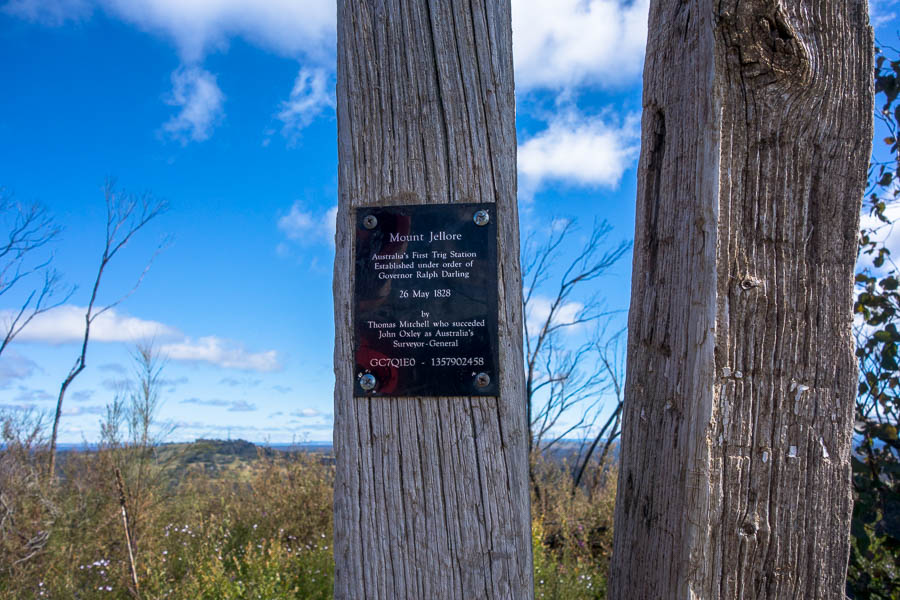 We headed out past the trig to the rocky outcrops for lunch. We had a couple of wedgetailed eagles do a close fly-by – almost as impressive as the ones we saw at Mt Kaputar. Despite being a lovely sunny day the wind was brisk and there wasn’t much desire to linger once we’d finished eating. 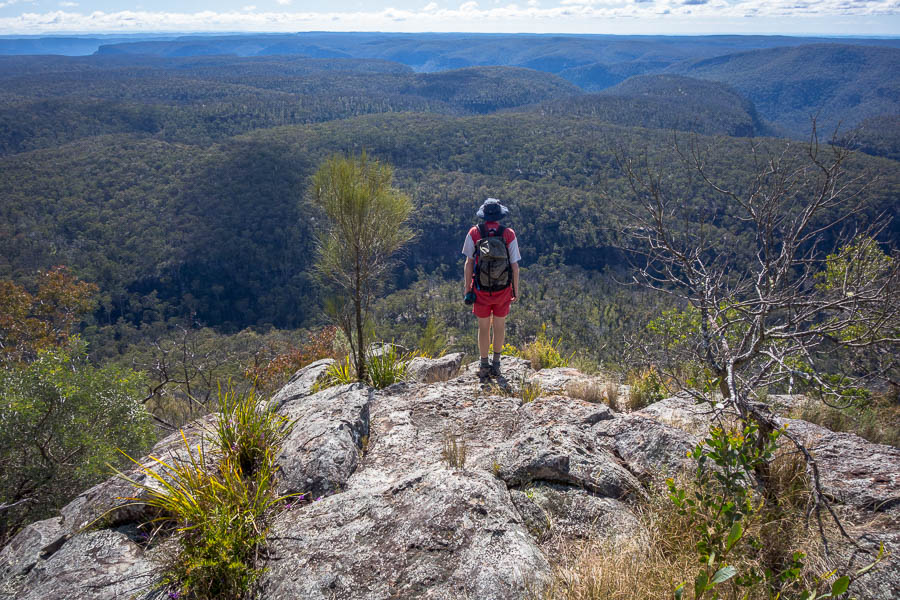 I guess these are acceptable lunchtime views…

After descending and having found no evidence of this ‘footway’ that was on openstreetmaps we decided we’d just go off-track for our return journey. There were a myriad of animal tracks so the going was relatively easy. 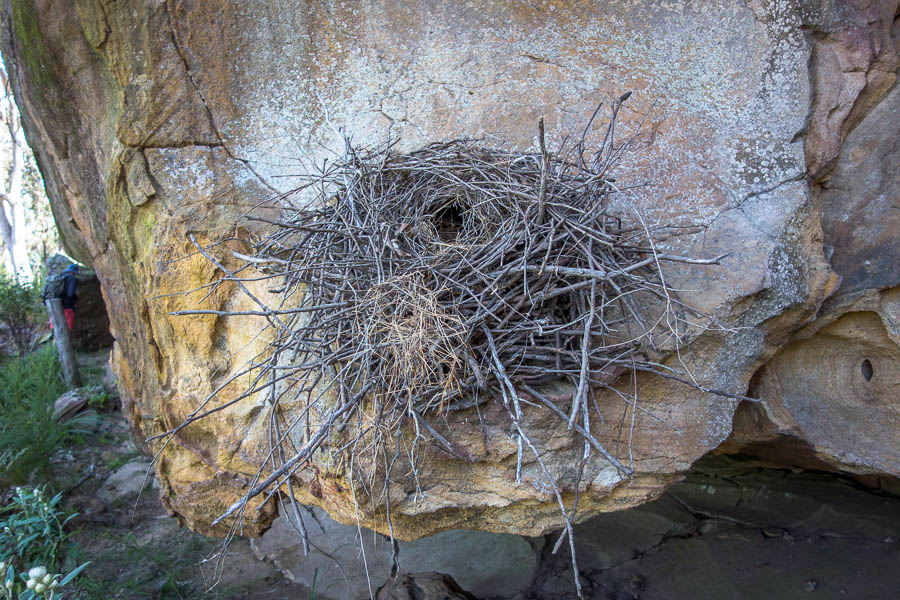 We were a bit surprised at the terrain we ended up crossing. After scaring off a couple of pigs we then found ourselves in a thorn thicket which we probably could have avoided with the benefit of hindsight. 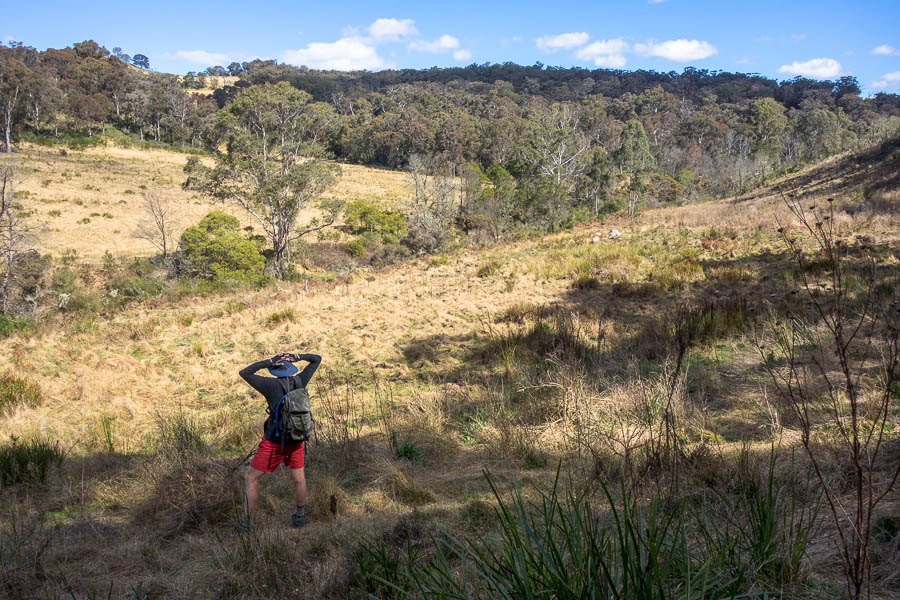 An alternate route back

Similarly we picked up an old fire trail on the ridge that we probably could have picked up earlier. Between old fire trails, animal tracks and relatively open bush we made reasonable progress to return to the main track after the thicket hell. 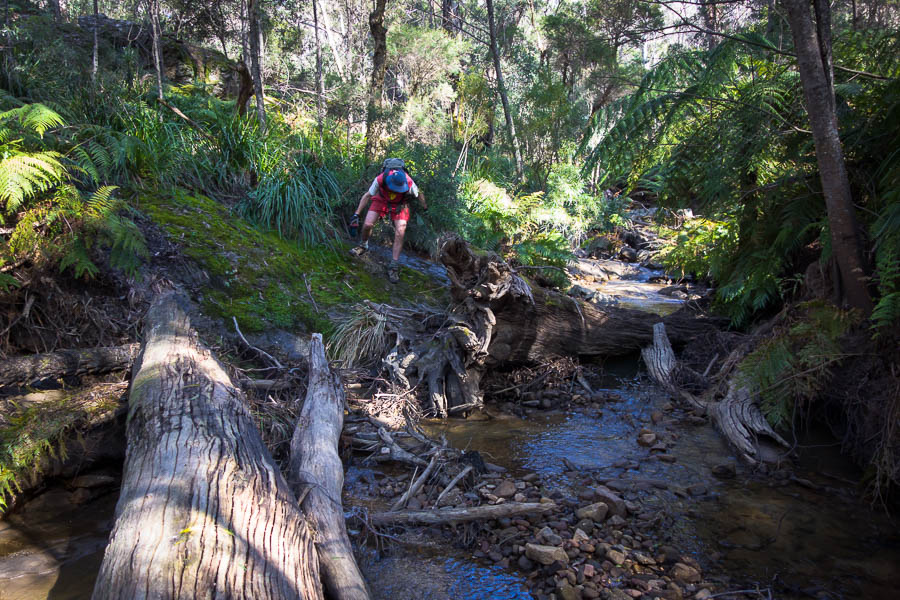 Back at the cars after 5 hours this was an enjoyable walk which got us back to Mittagong in time for afternoon tea before all the cafes shut!