After being somewhat scarred on our trip over the Easter weekend we weren’t that keen to venture off-track again. But mainly the rain had returned to the East Coast. I was heading to Tassie the weekend after so I wasn’t that disappointed with the forecast since I figured that meant I’d have the weekend to prep. Then Tom announced we should go to Mt Kaputar for the long weekend. “Right…” I say. “It’s a bit of a drive”, he says. “How far is a bit of a drive”. “6 or so hours”. “Oh”.

Tom’s plan involved leaving Thursday night, staying in a motel around the halfway mark, and then finishing the driving early Friday morning so we could be walking most of Friday. It seemed like a dreadful idea! I had a busy week at work, and if we went, I would only have one day between this trip and my Tassie trip. Every fibre of my being said we shouldn’t go. So reluctantly I agreed.

Tom, to his credit, organised everything. A bit dangerous on his part, since now I know he can do it 🙂 All I had to do was pack my individual stuff and hop in the car. We had Thursday night in Murrurundi – it’s claim to fame being where Tom’s great-great-great… something-or-other was a police officer. We were on the road again by 6:30am on Friday and so it was a completely reasonable time when we started the walk to Mt Yulludunida, loaded up with our overnight packs. 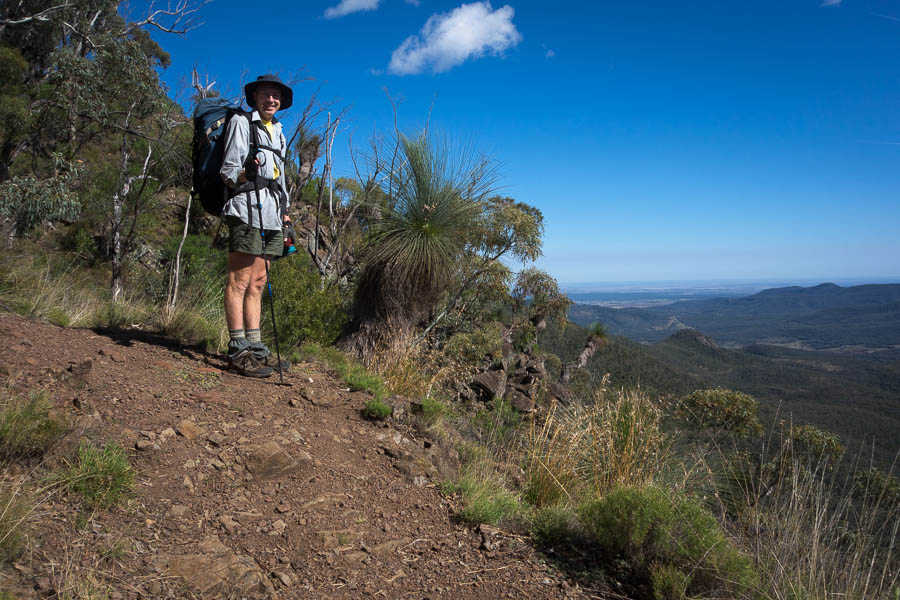 Tom on the way up Mt Yulludunida 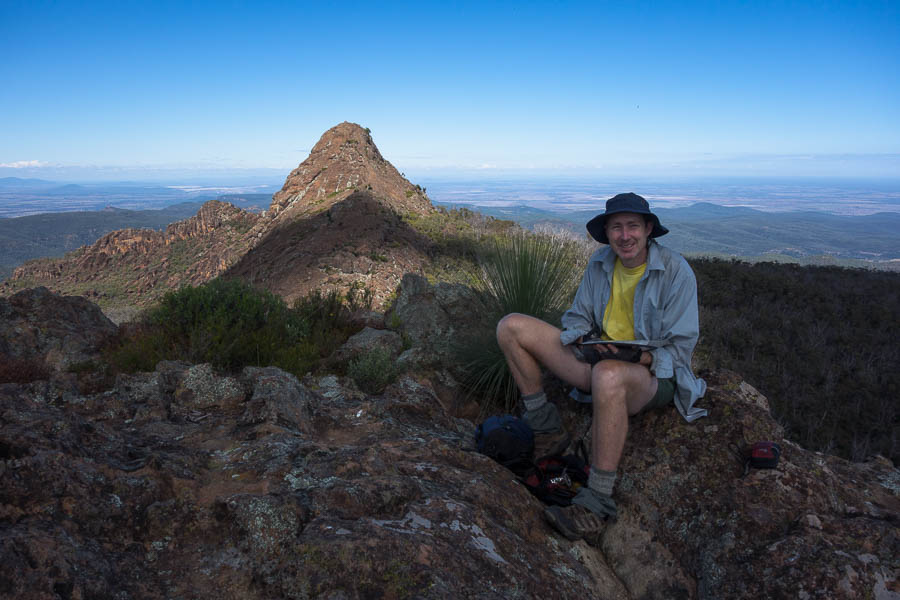 Morning tea with a view 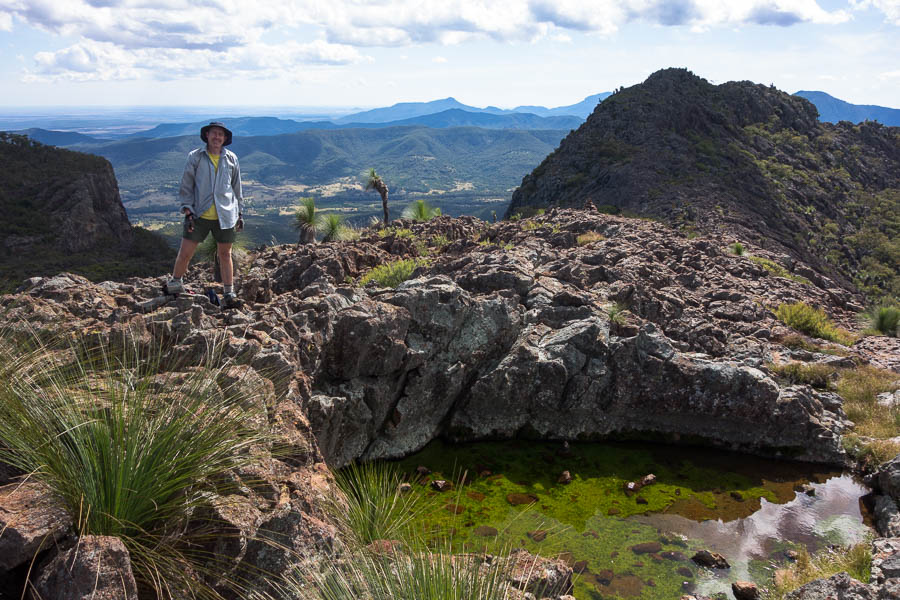 Thankful to dump my heavy pack (we were carrying water for two days) we set off with day packs to the Northern summit. While it was a nice day the cloud frustrated us, creating shadows just when we wanted to take a photo.

It was a pretty fun traverse. Going out ahead of Tom so he could take photos I watched him descending from the main summit. It looked so dodgy – but having just done it myself I knew there wasn’t really anything sketchy about it. (That said, I was glad to be wearing my grippy climbing approach shoes). 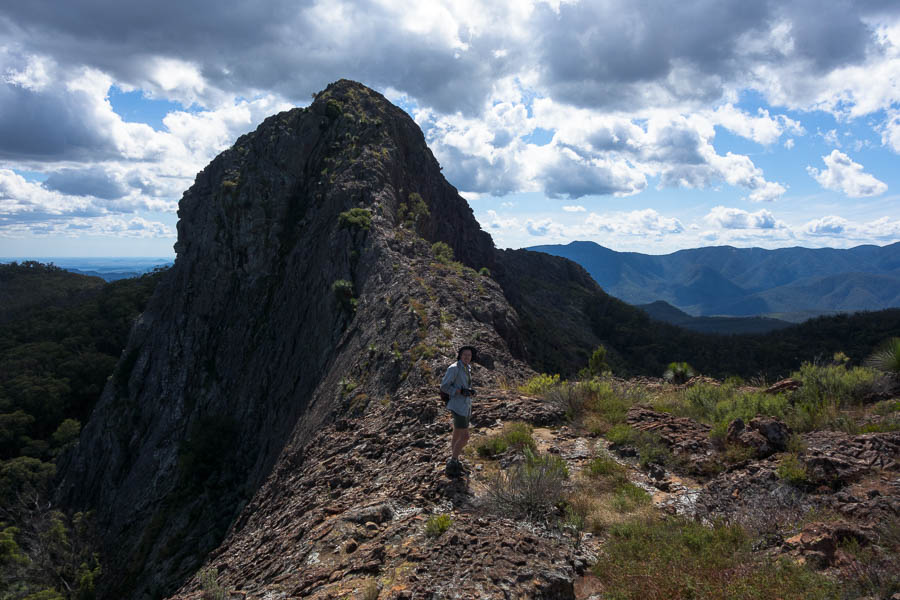 Traversing the spine of the range 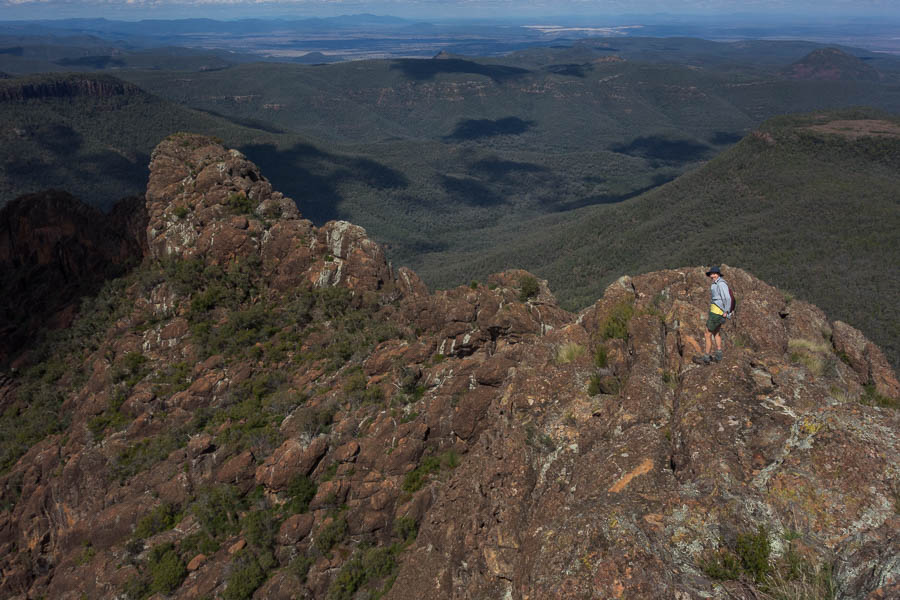 Eventually we got to a gap in the range – only a metre or so wide, but coinciding with a drop. Tom tried to find a way down, but his commentary did not fill me with confidence. We decided we’d come as far as we were comfortable so it was time for lunch. What an amazing spot. There were several wedge-tailed eagles catching the thermals around us, and at times they were only 10-20m away. 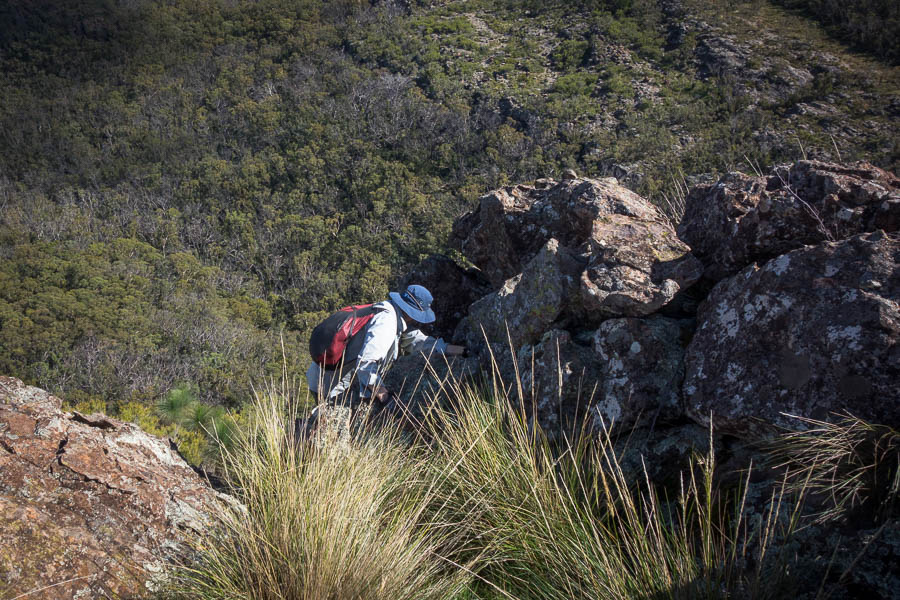 Tom checking out whether we can keep going

After lunch we reversed our traverse and reclaimed our packs. We headed out into the bush across the plateau. The busy work week I’d just finished was starting to catch up with me, and when Tom said there were some workable campsites at the knoll we’d paused at I was happy to stop. I thought Tom wanted to camp there as it had good views of the cliffs of Mt Yulludunida. However, when we walked out (sans packs) to the end of the plateau and found some reasonable flat spots near the cliff edge we decided to go back and retrieve our packs. I slept for the rest of the afternoon while Tom went photo hunting.

It was a lovely sunset and we had an enjoyable happy hour on the cliffs. 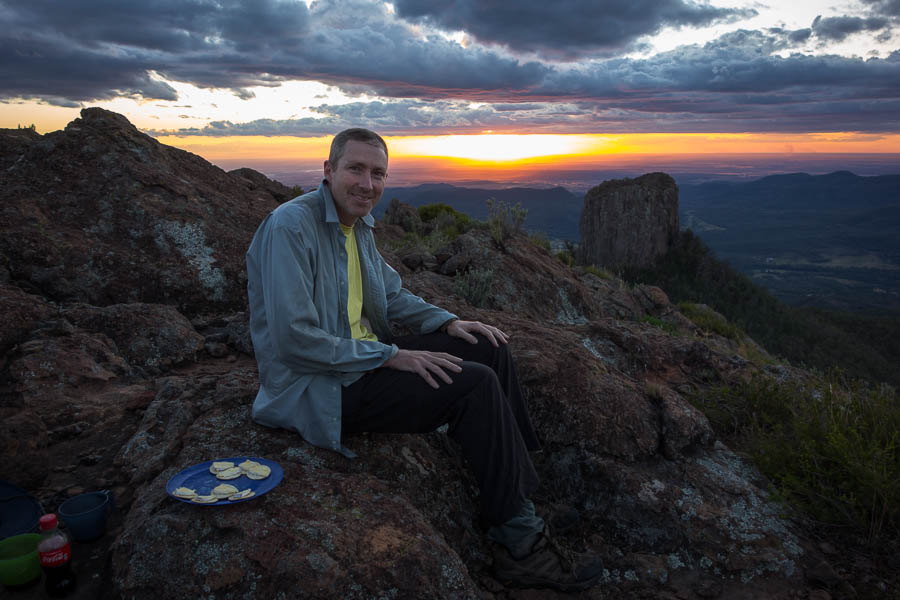 Sunset & Happy Hour. The best time of the day. 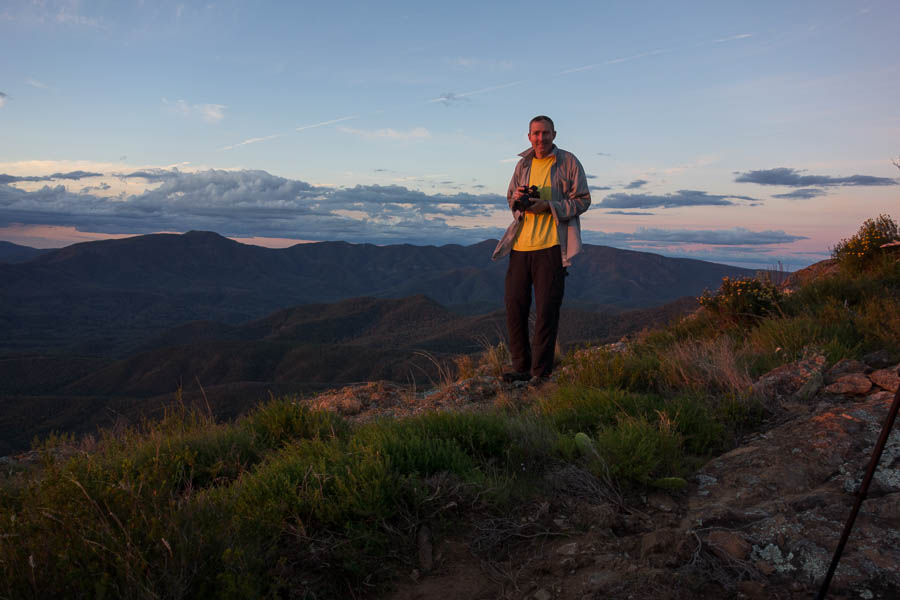 It started getting a bit breezy so we retreated back from the cliffs to get some shelter. We got through dinner before it started blowing a gale. The tent was a little away from us, and I’d been down a couple of times to check on it as it was not particularly well-pegged as we were camped on rock. The third time I checked it I didn’t feel safe leaving it alone!

From that point, one of us was in it until the next morning when we took it down. A pretty miserable night followed with the wind whipping the tent down on top of us. We didn’t do the fly up because of the extra sail effect it was having. All our gear was at my feet in the tent so that it didn’t blow away outside. 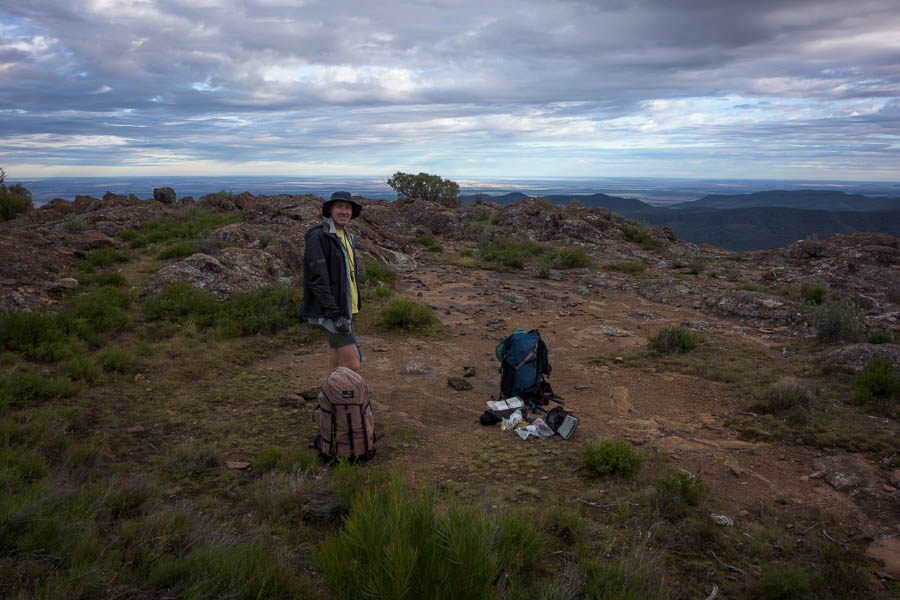 Site of our dismal night

We survived the night.

Not sure it was my worst night camping. We tried ranking them as we walked out. I think our night at Goosenecks State Park in the US is still my number one. That was also a very windy night.

There wasn’t any discussion about exploring the rest of the plateau. By unspoken agreement we headed directly back to the car, and then to Narrabri for a coffee. After the coffee I was feeling slightly more human. We picked up some firewood and the physical newspaper (how novel) before heading back out to Mt Kaputar. 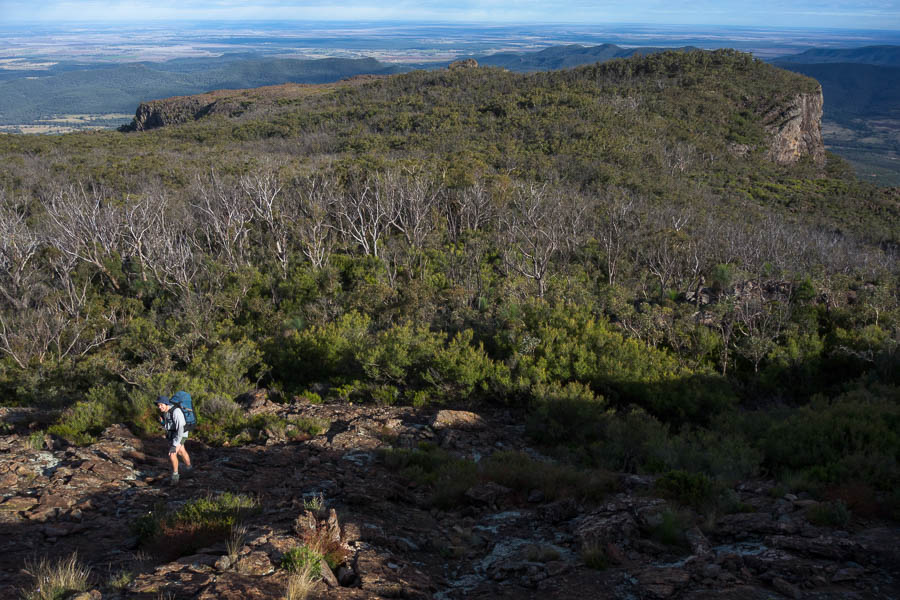 On our way out

We headed up the Mount Coryah walking track, unfortunately getting to the main lookout at the same time as another group. Not having understood the track I pushed on thinking we’d be doing a circuit of the plateau and returning that way. It was only after we’d descended and started skirting under the cliff that we realised we would not be returning to that lookout without turning around. We settled with having lunch on a rocky outcrop before heading back to the car. 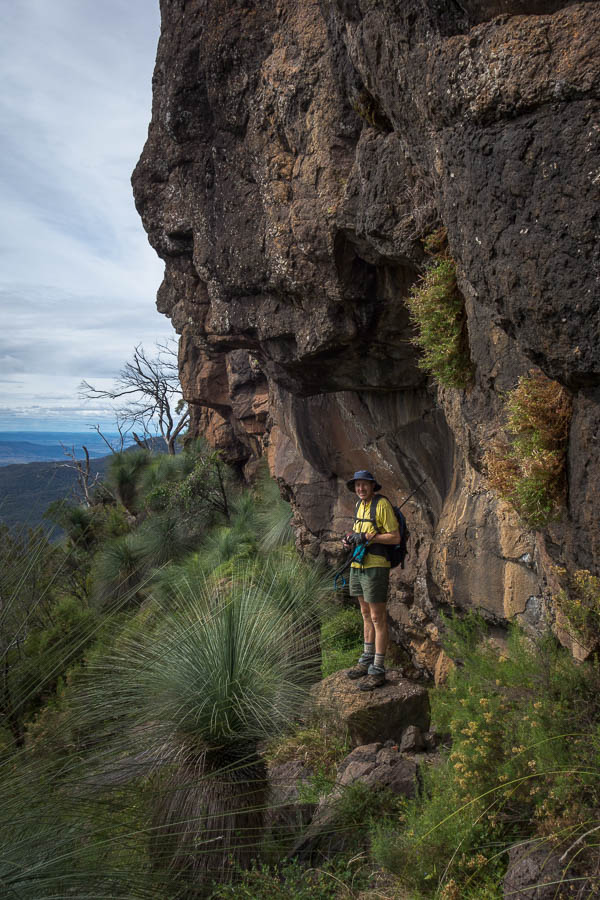 Below the cliff line on Mt Coryah

From there we headed to The Governor (Corrunbral Borawah). The walk description said: “The walking track follows an easy sealed boardwalk to The Governor lookout, where you can bask in the superb scenic mountain views. You’ll see majestic mountain gums and vibrant wildflowers in the spring. The second half of the track, though, will definitely get your heart racing. Ascending steeply via ladders, you’ll have to do some rock scrambling, but it’s all worth the effort.” I was excited for the walk and the scrambling, and then felt completely ripped off when I’d got to the end without using my hands. There were good views though.

By then it was time to go and settle into our, hopefully far more sheltered, campsite for the night. Unusually for us we’d decided to book into the official national park camping. We were less than delighted to find that half the campsite was a construction zone, which was visually jarring. But more intrusively there was work going on in the middle of a Saturday afternoon of a long weekend. Diggers that beeped every time they reversed, trucks and utes driving in and out of the campground. And they didn’t even knock off early. Finally at 5pm there was peace. We were a little annoyed since there had been no information about this when booking the site. We may well have made different plans had we known. 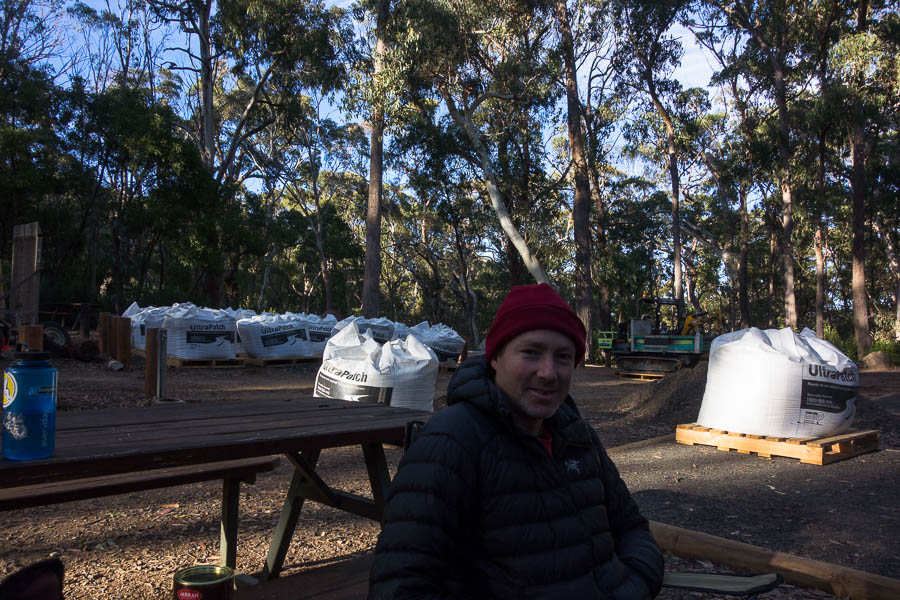 Tom decided sunset was going to be viewed from the Mt Kaputar Summit. Fortunately we were allowed to drive up there. We weren’t the only ones, or the only serious photographers, but we were the only ones with cheese & crackers & port! 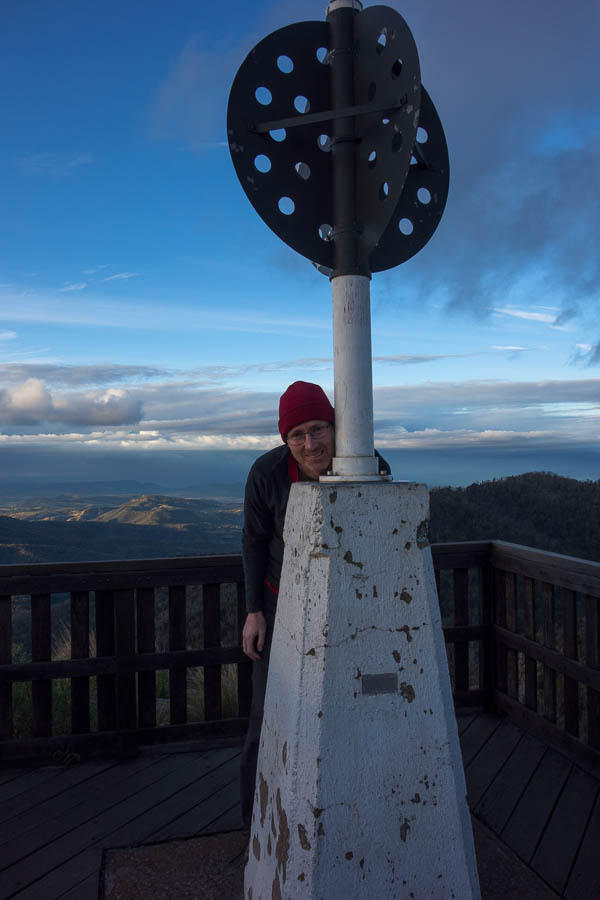 Slightly less effort to get to compared to the trig station last weekend!

The joy of a well-pegged tent, in a pretty sheltered campground, led to a good night’s sleep. Despite the campsite being booked out it was very quiet. That was despite the large group of climbers who were camped next to us arriving well after dark. I didn’t know where they were all going to sleep as there were about 8 of them and the tent platforms were only big enough for 1 or 2 tents. But I should have known better – all bar 1 were sleeping in their cars – and they turned in before 9pm.

The next day we opted to do the Kaputar Plateau Walk. This is an 8km loop but 2km of it is on the road. We did the 2km down the road to start. It was surprisingly cool in the shade as wound our way down the mountain. The highlights of the track were the lookouts. We had morning tea at Lairds Lookout which had great views towards Euglah Peak. The family that was leaving as we got there said we were lucky as normally it was a favoured goat hangout. No signs of goat for us though. We went looking for Euglah Cave, and found it (we think!). 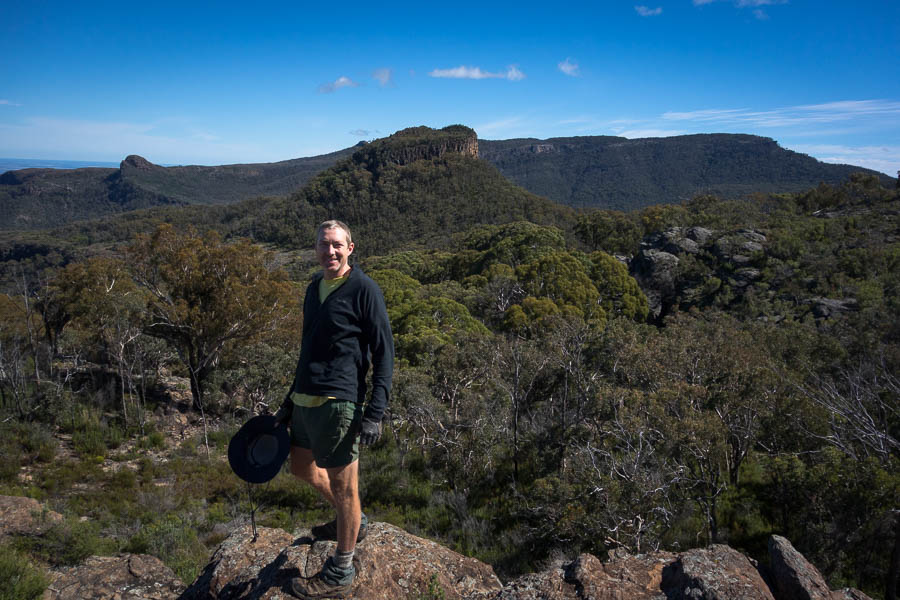 Returning to the track we followed the fire trail uphill. Some sections were not too far off feeling like a ‘real’ bush track, others were clearly fire trail. Rangers Lookout gave us good views in the opposite direction towards the Bundabilla Cliffs. Rather than an early lunch we returned to the car and headed back to the campground. 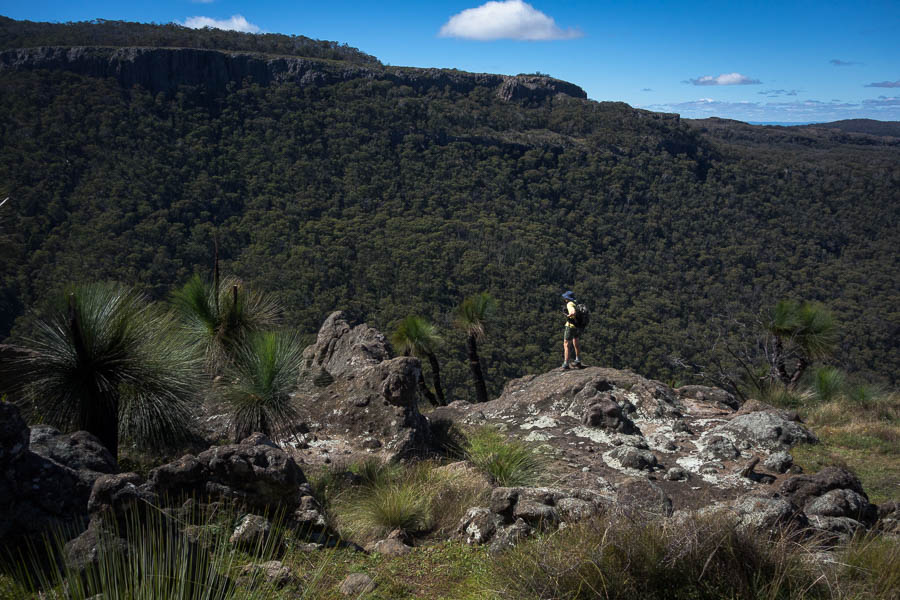 We’d hoped to walk from the campground on the link track to the Bundabilla Circuit. Tom had seen the link track had been closed but was supposed to now be open. Unfortunately the website wasn’t accurate and the link track was still closed. And there were workmen again! On the Sunday of a long weekend!? We did the Nature Trail since we were on it and had lunch on one of the benches along it so that we weren’t next to all the trucks at camp.

Mid-afternoon we drove round to the start of the Bundabilla Circuit since we couldn’t walk there. It had plenty of viewpoints, and the side trip to Lindsey Rocks gave us more great wedge-tailed eagle viewing. 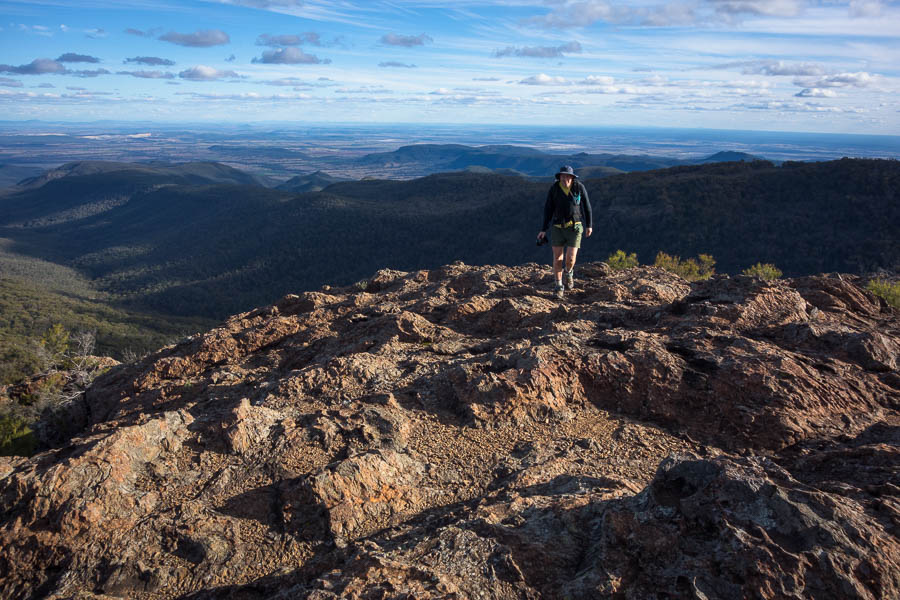 By the end of the day, I was happy just to settle down at camp, but Tom needed to do sunset at Mount Kaputar again. I left him to it! The campground was only half-full which was quite the contrast to the night before. 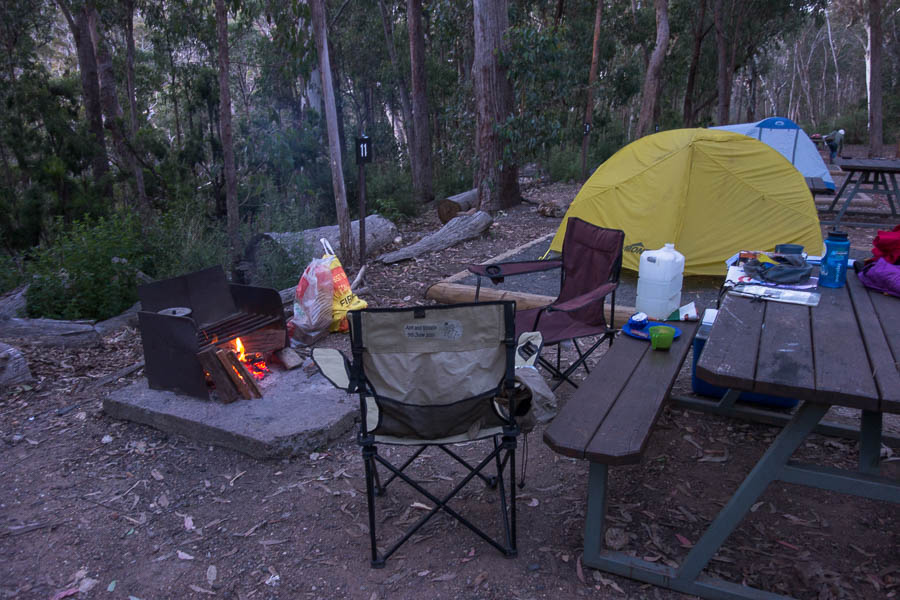 Looks cosy in this direction!

Our final day we got going pretty early to get some of the 6-7 hours drive under the belt before we even realised. As it was Anzac Day not much was open in the towns we went through, and the main road was closed off in Gunnedah for a parade.

Burning Mountain Nature Reserve was a good way to break up the drive with a solid 4km walk to see the burning coal seam.

Unsurprisingly every pub we drove past looked packed. Fortunately we managed to get some filled rolls to take away in Scone before the final push back to Sydney. A very enjoyable weekend away, which just proves your instinct is not always right.