It seemed it was the weekend for rogaining. NavShield and the Bidjigal Night Rogaine were on in NSW, but I was in Victoria to do the NO IDeA Rogaine. The NO IDeA Rogaine was set in the Heathcote-Greytown National Park just north of Heathcote. As always the planning and preparation time whizzed past and we hadn’t settled on a route with only half an hour till the start. Opting for Plan A the highlighters were quickly put to work and we made it to the briefing in time. 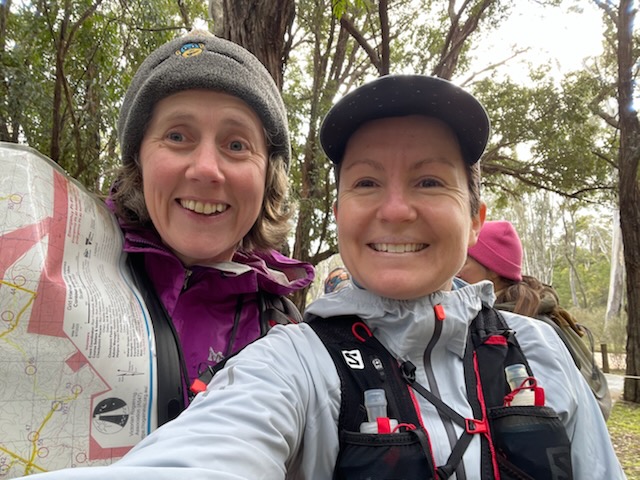 This was possibly the most challenging terrain I’ve had to navigate in a rogaine. On the ground was gently undulating with subtle features – difficult to pick up from the 1:30k map. I now have a much greater appreciation of NSW Spatial Services making LIDAR data freely available – it would be fascinating to see this map re-done – unfortunately Victoria does not have the same open data policies.

The bush was open and made for quick cross-country travel. We started off well, whether through skill or luck, we nailed our first 9 controls (55 – 65) in just under 2 hours. 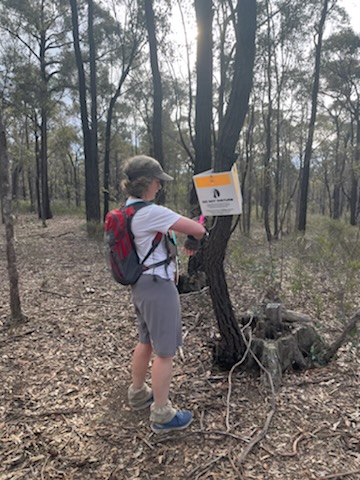 Our only major mishap during that time was losing Mel’s map on a stretch of fire trail where we were eating rather than navigating. Fortunately Mel had photographed the map before we’d started so she at least had a copy on her phone – albeit only a small section she could view at a time. However, we soon discovered compasses and phones don’t play well together, so we were also down to one compass, as Mel wasn’t able to take bearings from the map on the phone. [Tom did point out to me after the fact that I could have given her my bearing so at least she had something to walk on as well] 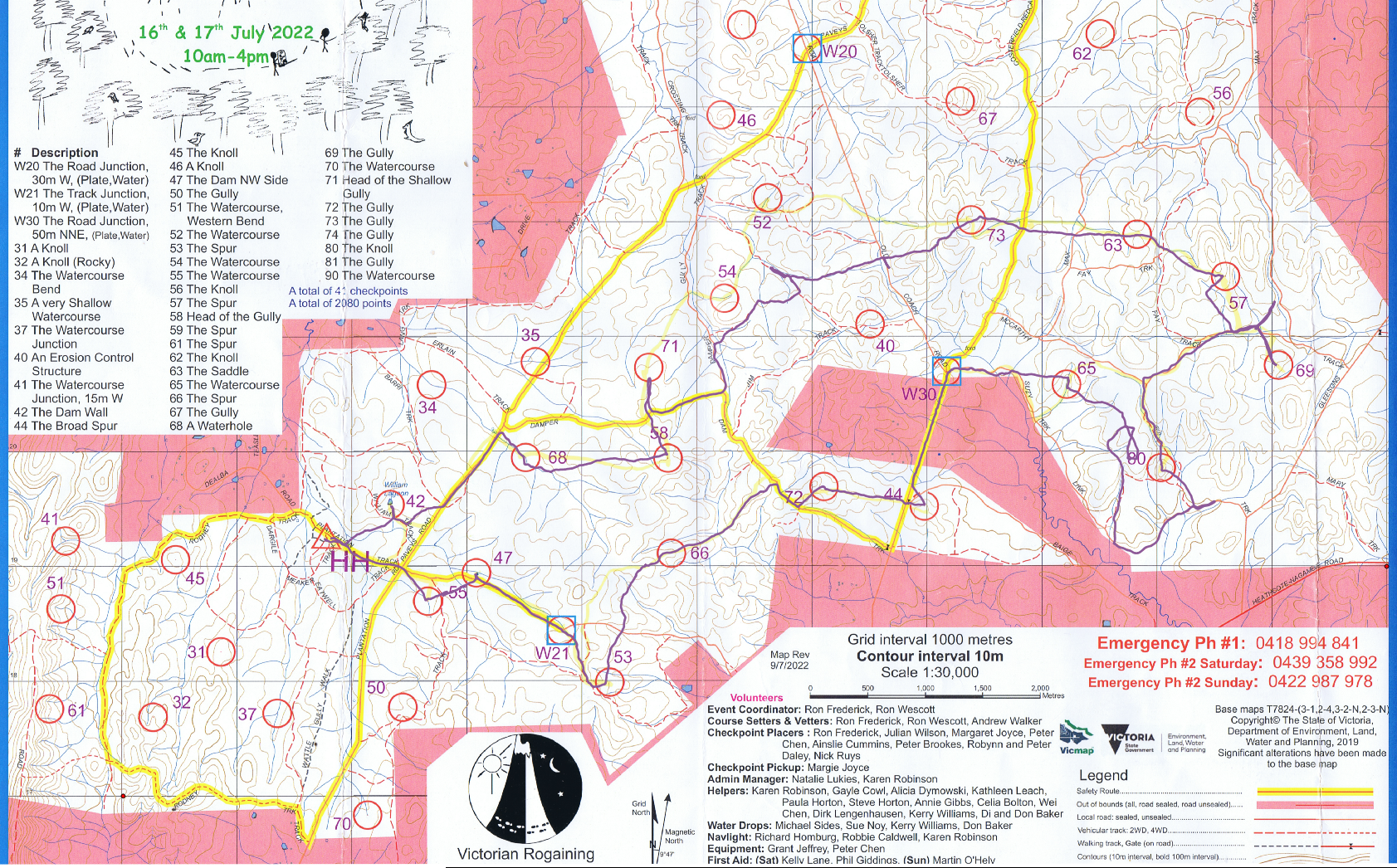 After 65 the wheels fell off. We got a bit excited after seeing our competition head cross-country from 65 – we abandoned our plan (which had been north-east to the road, then follow the less distinct road south), but then didn’t make a clear replacement one (just a vague head east and expect to hit the less distinct road – which we enact anyway). Having climbed a distinct knoll after crossing a saddle and then not finding the control we were confused.

Looking at our track after the fact and comparing to the map (and to the contours on OpenTopo) I can see how I misinterpreted what was on the ground, and several things we could have done rather than what we did… but that’s the beauty of hindsight.

At the time we didn’t know where we were. Hoping to gain some idea (haha) from the next team who suddenly appeared was unfruitful. And some time later both our teams, independently, ended up meeting again on the road south of the control. Finally we got things back on track but it was a 40 minute mistake. 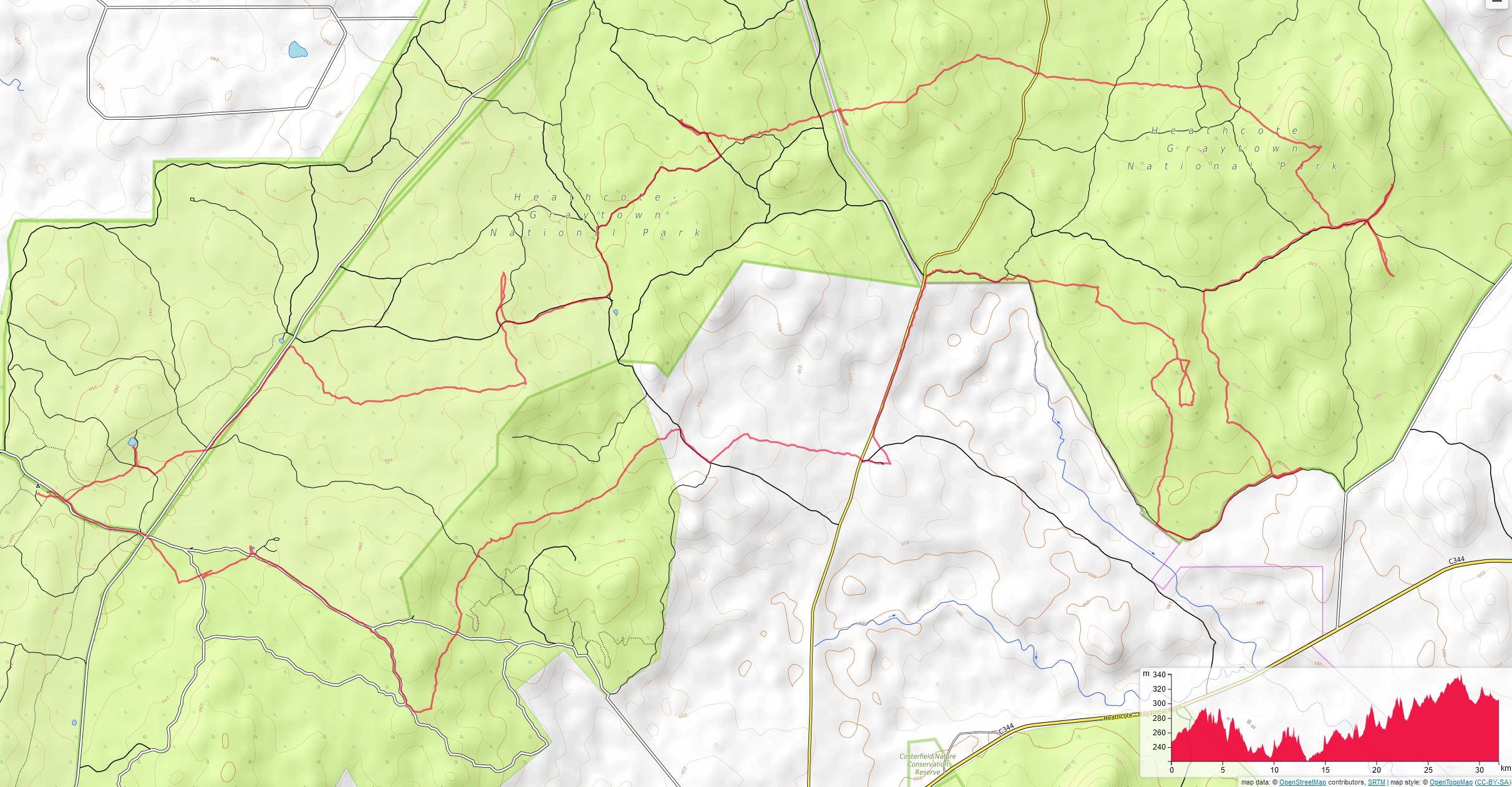 There was a bit more confusion on our way to the next control as well. This time due to a significant 4-way intersection existing on the ground that was not on the map (it is on OpenStreetMap see above). We recovered from that one fairly quickly and got back into it for the next 3 controls. By then I was very happy to be leaving the roads behind and just navigating by features. After nailing our walking on a bearing between 63 and 73, we completely failed on the next control.

Following one of many bearings

The aim had been to get from 73 to 52. But looking at what we did the bearing must have been somewhat off, plus we failed to correct sufficiently having wandered into the wrong gully early on. Once again we didn’t know where we were.

We worked out where we were somewhat faster but gave up 100 points (52 and 54) in the process. I would have liked to have pushed for 54 once we worked out our location but time was starting to be a factor and I think we were a bit mentally scarred from the mishaps mounting up.

Fortunately we made it to the remaining controls in our plan without drama and got back to the Hash House with 5 minutes to spare. I had a chat to Grace & Anna (our competitors from #65) – as it turned out they ended up being the best Women’s Team – and we had done exactly the same route until 65, with only 1 minute separating us 2 hours in. They made it to #80 in 14 minutes as compared to our 56… Though I probably learnt more from that mistake then from all of the controls with no issues!

It was a great to get out in the bush with Mel 5 years after our last rogaine together.