Ironically (?) I was home alone due to my last solo trip. Tom was off on a holiday without me since he hadn’t been able to make my Tassie jaunt. The weather looked like it might actually be pleasant on the weekend – I realised I had no excuse to stay home. Of course it was already Thursday, far too late to realistically find company. After a lacklustre effort (I asked 2 people) I found myself setting off, alone, from the Wattle Ridge carpark shortly after 8am on Saturday morning.

Optimistically dressed in shorts but with a scarf on, it didn’t take long to warm up as I marched along the fire trail. At the Starlights Trail I took the option less travelled (for me at least) and headed out on what the Second Edition maps have marked as the Nattai Road (erased without a trace on the Third Edition). The first part I had walked a couple of times previously, but after reaching the Troys Creek Fire Trail junction I set off into the unknown (yet again, for me!). I wasn’t sure what the state of the Nattai Road would be – non-existent, a recognisable and easy to follow fire trail or something in between?

The condition deteriorated almost immediately, though it was still clearly an old road. 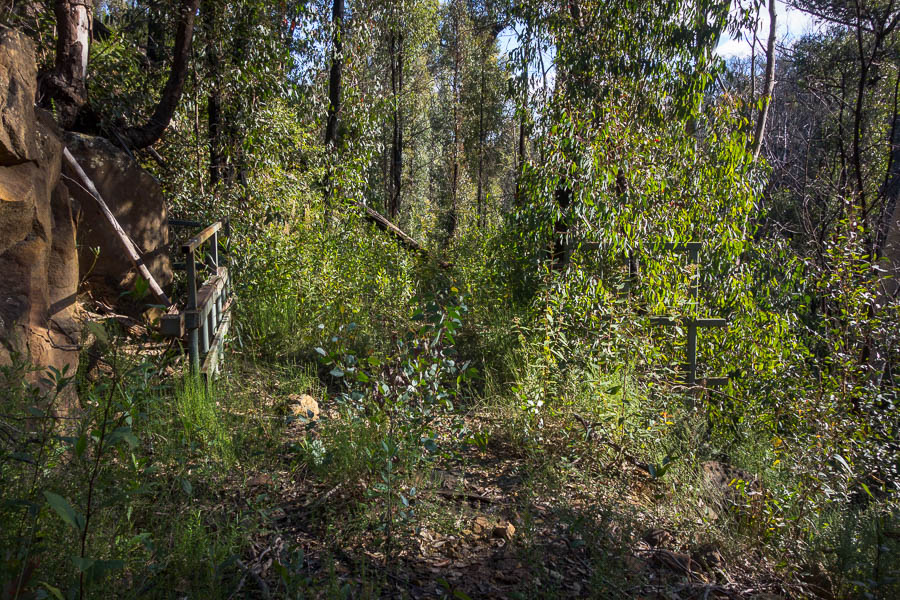 The road seems to get enough use for a pad to exist through the regrowth when it had taken over. The fallen trees were more of an effort to climb through/over/under. 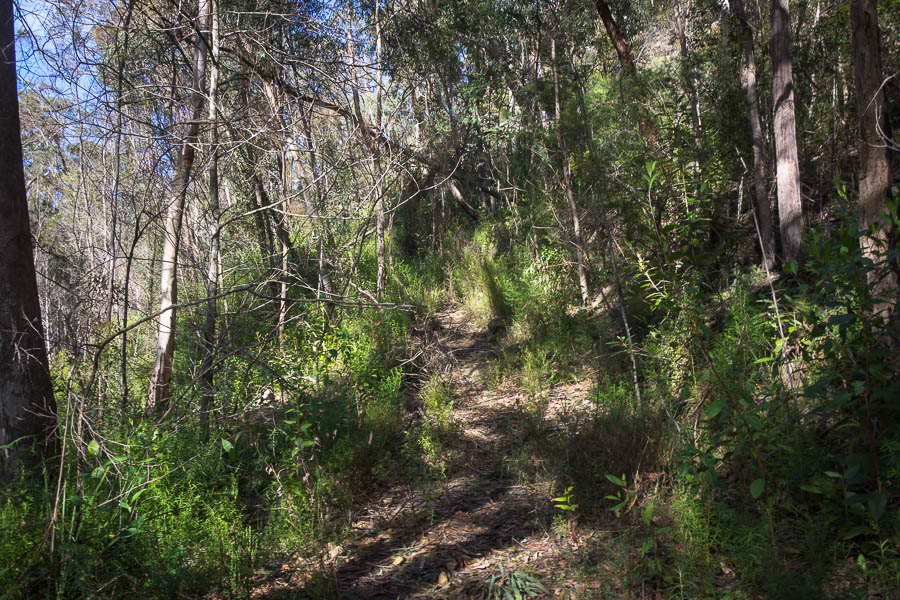 Looking uphill as the road disappears into the regrowth

Then at times after battling through the trees it would open up to a clear road. 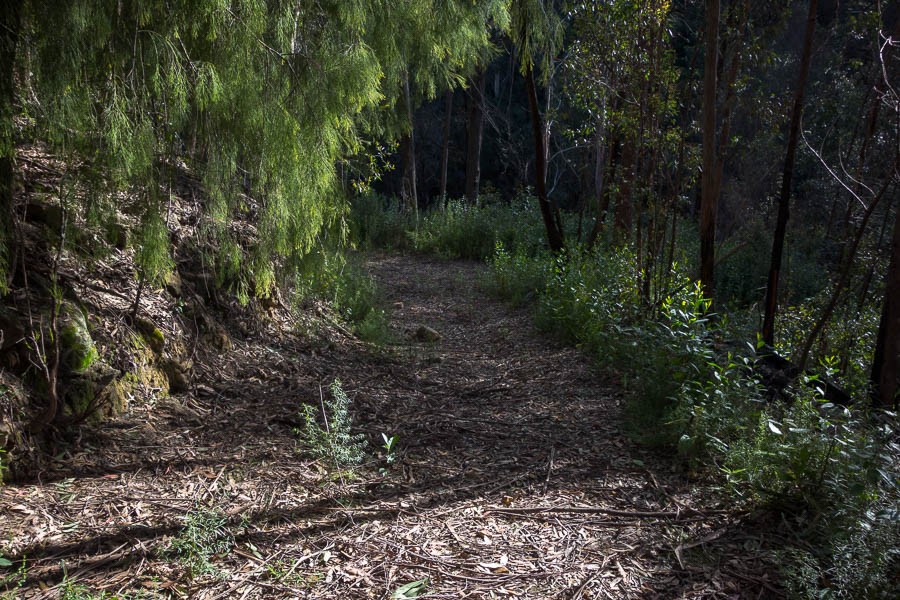 In the same spot at the previous photo, looking downhill where the road is wide and easy to follow 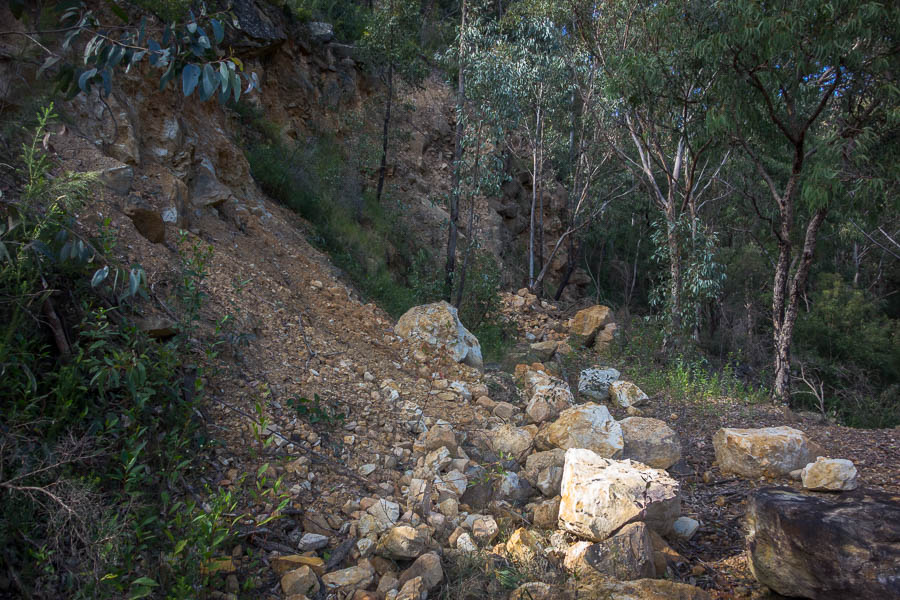 Some fairly serious rockfalls across the road 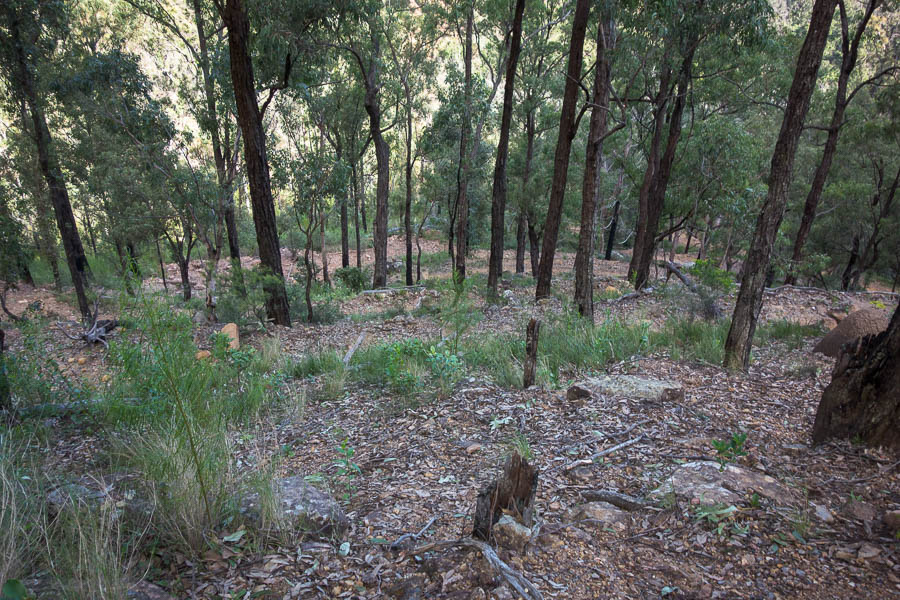 The long series of switchbacks are still in pretty good condition 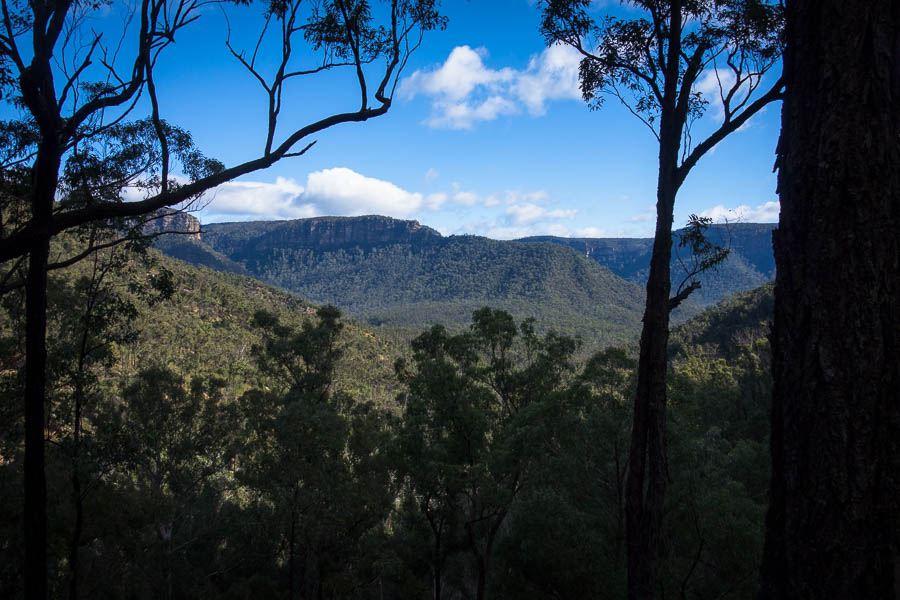 Views across the Nattai River valley

Fortunately there was more relatively easy to follow road than bush/tree wrangling and I made reasonable time to get onto the valley floor. From there the road became harder to follow so I decided it was easier to walk down the creek. 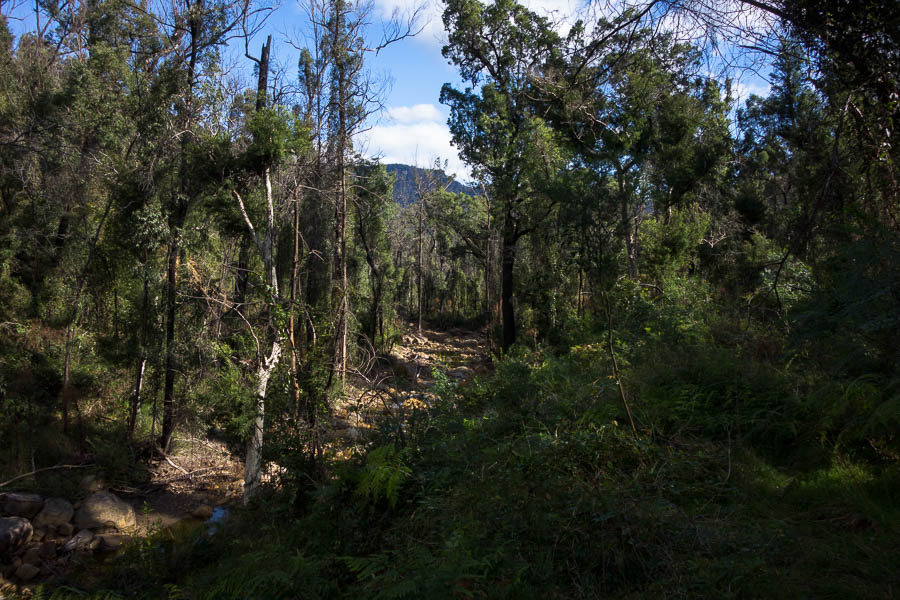 Eventually getting back up on to the bank I found the track again. For not the first time that day I was glad to have marked the line of the road onto my Third Edition map. Knowing where the road had supposedly gone previously was a decided advantage. I was curious to find two cairns close together. It was unclear what they might be indicating – if I had to guess I would say a spot to head up towards the cliffline (which looked imposing)? 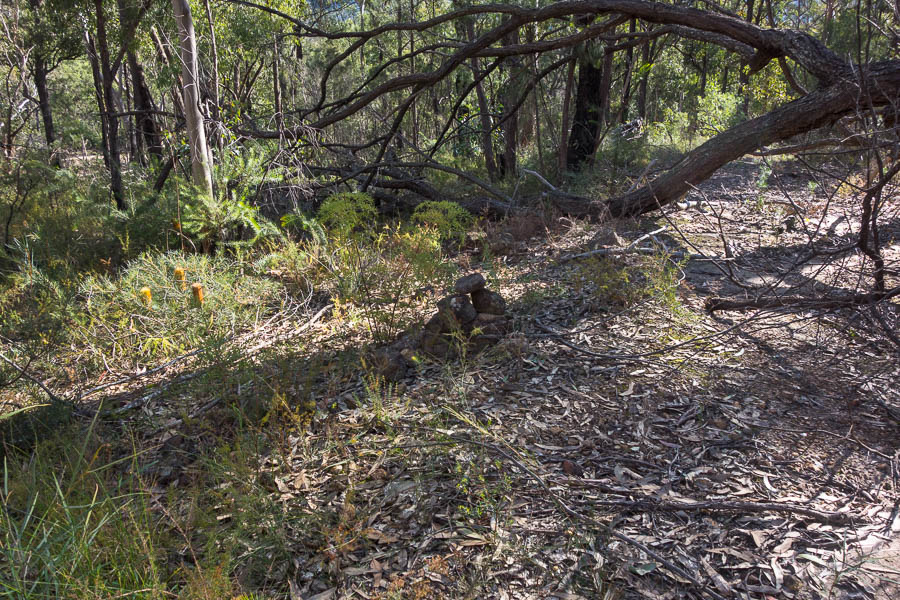 Back on the road at near the River junction I found a couple of cairns – not sure what they were in aid of?

My original goal had been to head a fair way downstream and hopefully get to Grant Head. It became clear that was probably a bit too ambitious for the day. Two poor night’s sleep in a row were catching up with me. I wandered on the large sandbeds admiring the landscape trying to decide what to do. Eventually I decided I should just eat lunch! Feeling slightly more energised I figured I’d head downstream and see what the going was like. 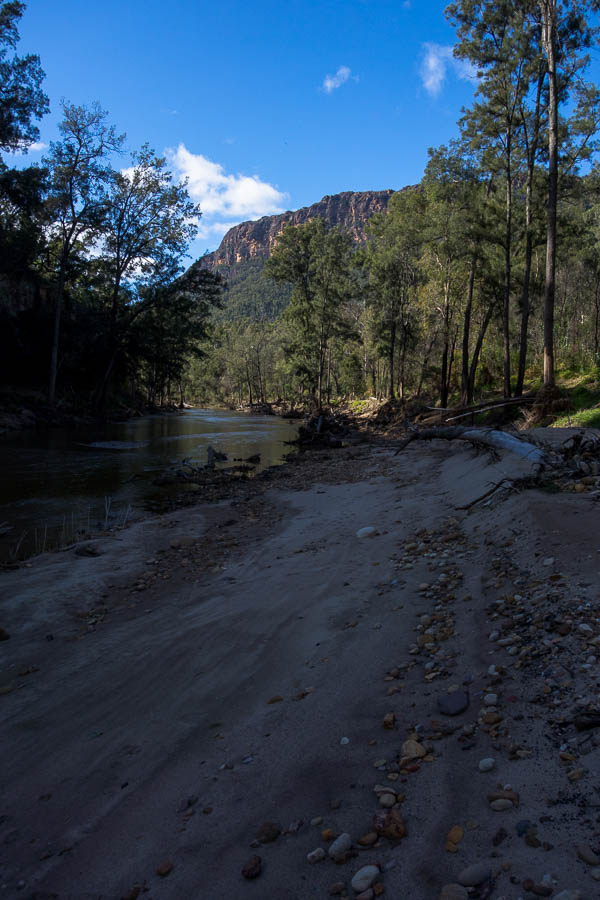 Walking downstream there were plenty of stunning clifflines

While the walking was clear, it wasn’t quick across the sand. When I hit a section where I was going to have to climb up and around unless I wanted to swim I figured that was as good a turnaround point as any. I clearly wasn’t the only one who had been here recently there were quite a number of footprints in the sand. 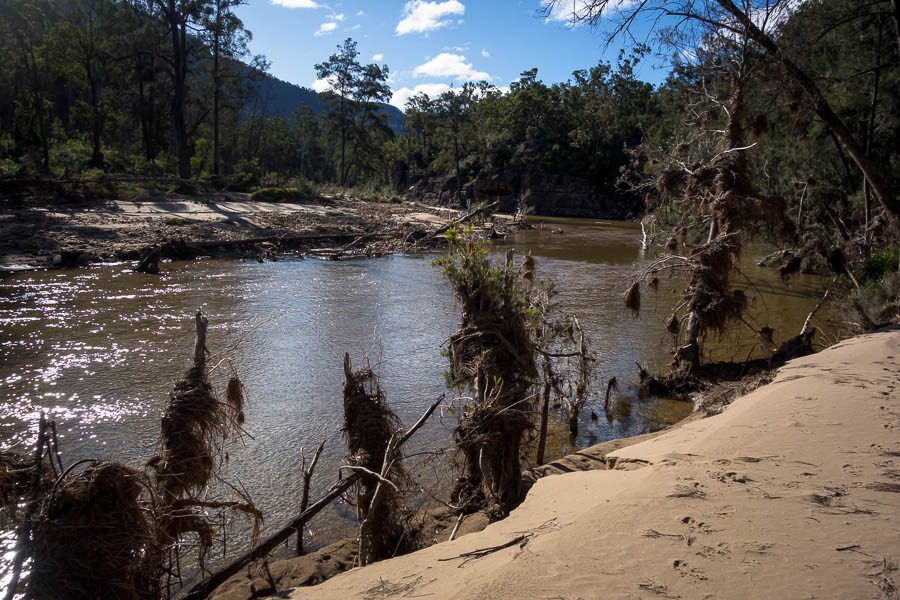 Near the confluence with the Allum River

I continued to have the company of a single set of footprints  (other than mine) as I retraced my steps, and indeed the rest of the trip, back to where I had arrived at the Nattai River. This time I chose to stay along side the river rather than pick up the road. Unfortunately that meant a couple of shallow wades – off with the shoes. The side effect of wading through very cold water was a definite perk up in my mental state. 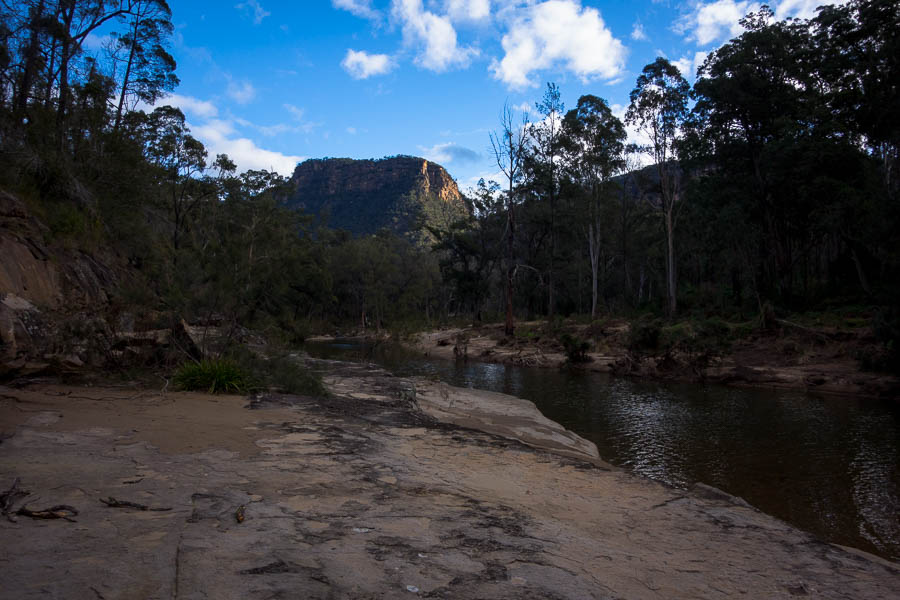 I’d told myself I needed to walk upstream till at least 3pm, to make the next day not too unreasonable. So not long after 3pm I settled on a little sandbank opposite Surveyors Crag. I’d passed many, many suitable, and arguably superior, camping options but the spot I chose had a nice feel to it, and it wasn’t like I needed much space! I even had my own little stream. Water is definitely not an issue at the moment – the Nattai River isn’t good drinking –  there were regular flowing tributaries.

I wasn’t sure how I was going to make myself stay up to even 7pm. But setting time limits to when I could start eating cheese, then soup, then dinner managed to string out the evening. I was amazed it was after 8pm when I decided to retreat to the tent (7pm was going to be a win). 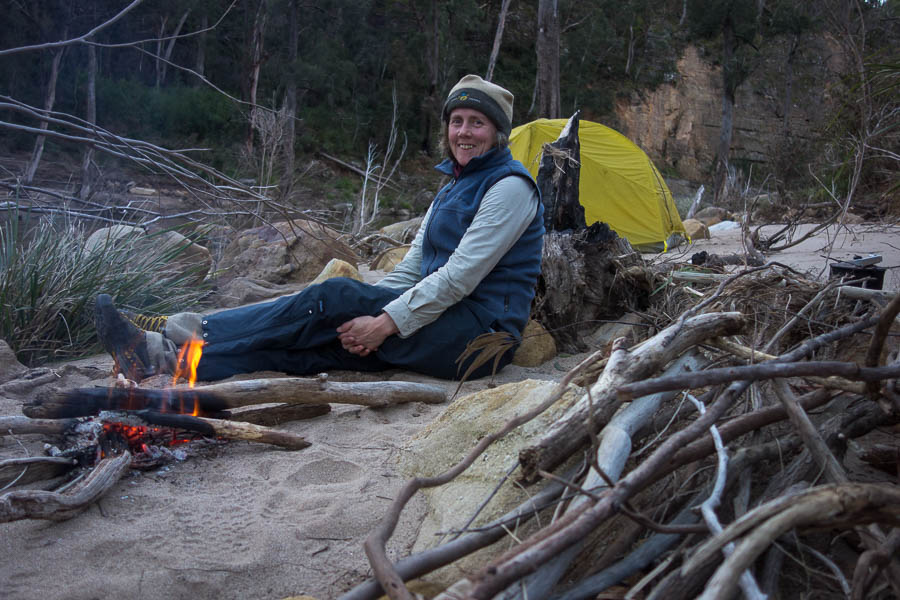 Settled in at camp

I spent some of the many hours in bed worrying that I had left too much river walking for the next day. Who knew how rough the going would be? Was I going to be getting out in the dark? I thought it wouldn’t take long to get ready – after all I didn’t have Tom with me! Yet somehow it still took 1.5 hours – so much for my vision of being walking not long after 7am.

However, my fretting from the night before was quickly allayed when I found a secondary channel that I could just march down. I could even look up at the changing angles of Surveyors Crag without being too worried about falling over. 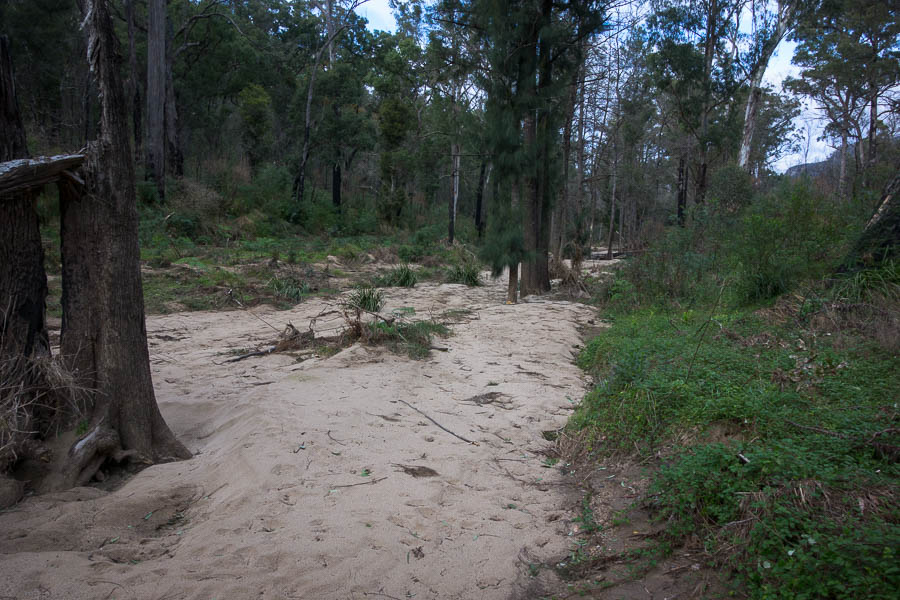 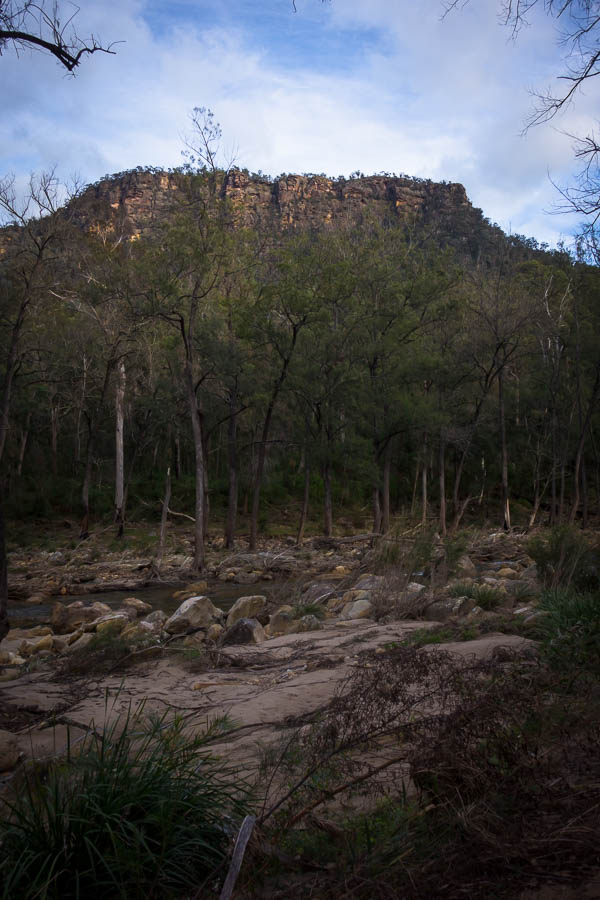 When the secondary channel ran out I hit a cliffy section. The first bit I soon concluded was probably a bit too high in the risk stakes to climb, given I was alone. So shoes and socks off, and a cold wade got me to the next section minus a chunk of my big toenail (ouch). The next section was easier scrambling and I was pleased to get up and avoid a much longer wade. 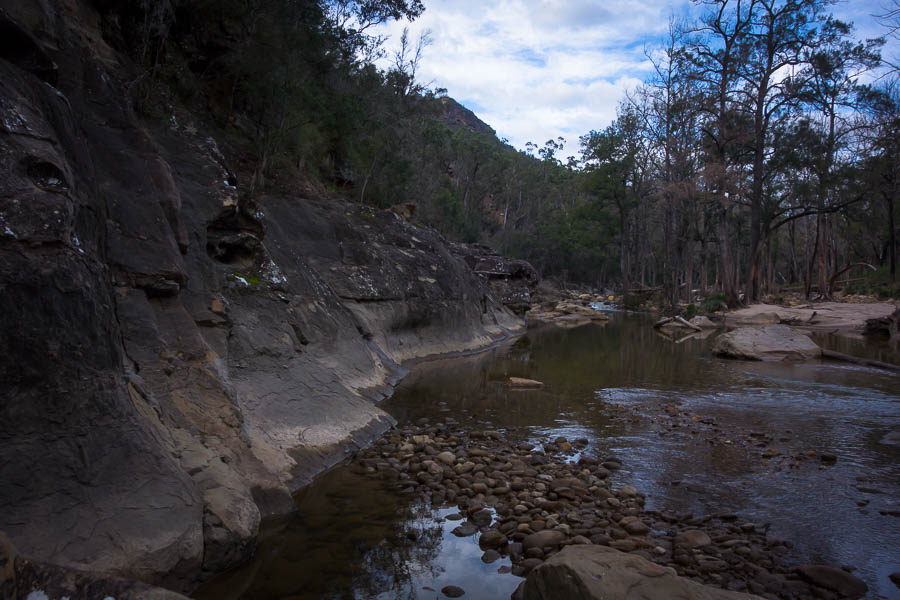 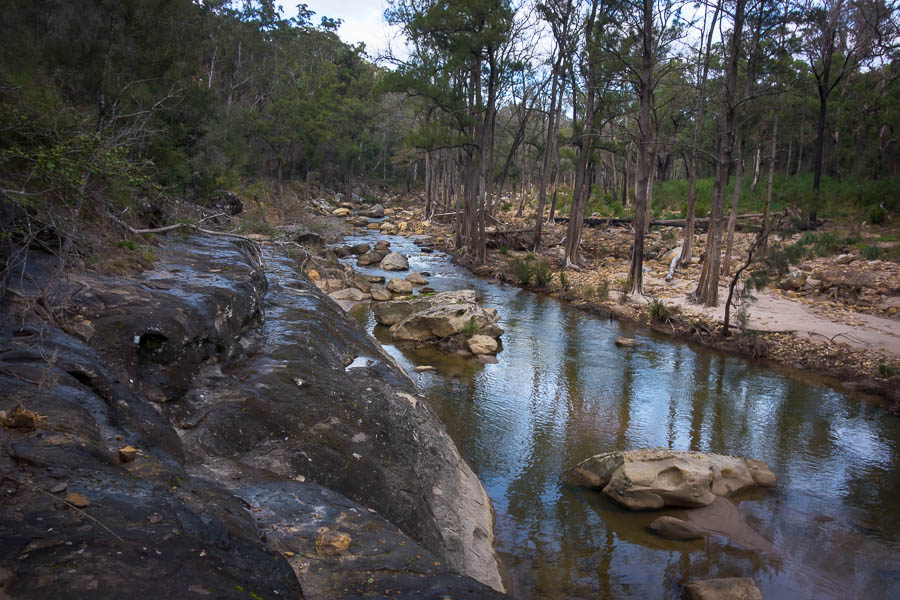 OK, so I managed to get up and bypass a wade 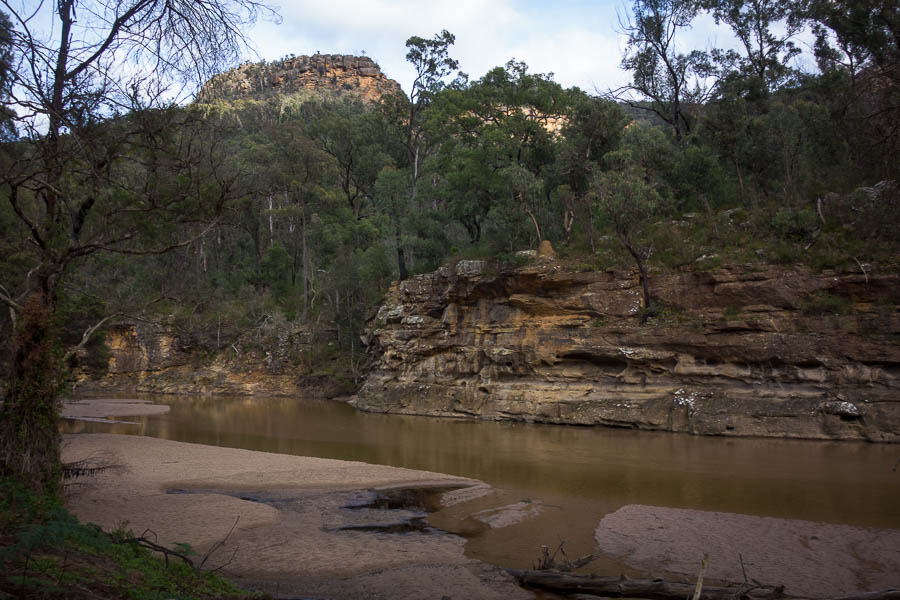 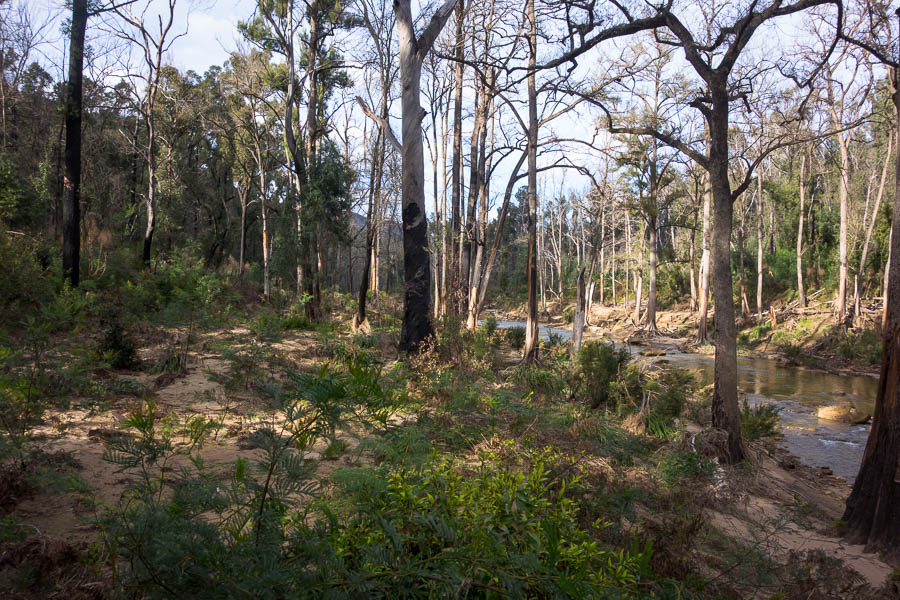 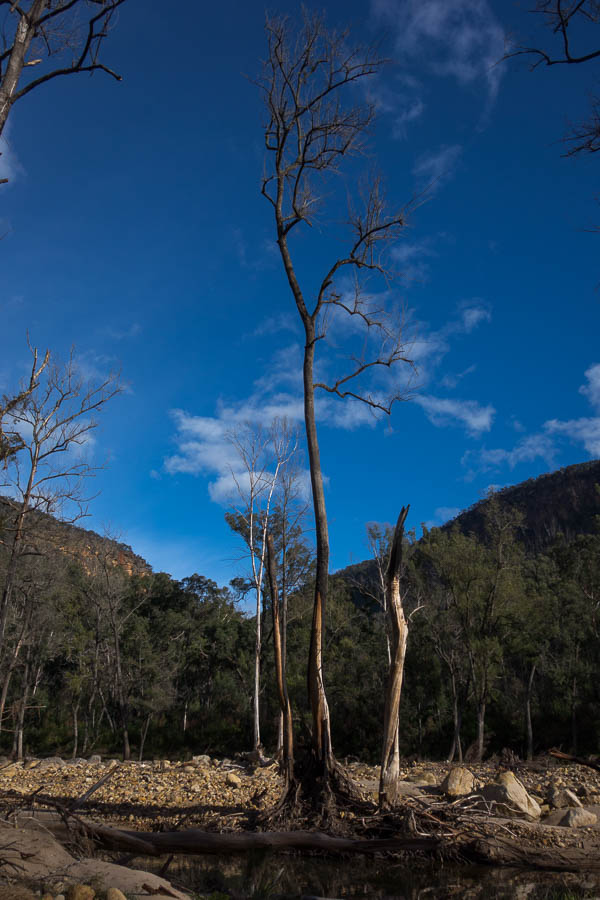 Beautiful day (much nicer than the forecast)

As the river straightened the pleasant walking was replaced with a bit more effort. Also the campsites which had been plentiful the day before were far more sparse – unless you wanted to cross the river. Fortunately the wombats had left some good tracks to follow – except, of course, the sections which were wombat height. This was much slower and harder work, and even though relatively speaking it wasn’t that bad, I was ready for it to be over well before it was. 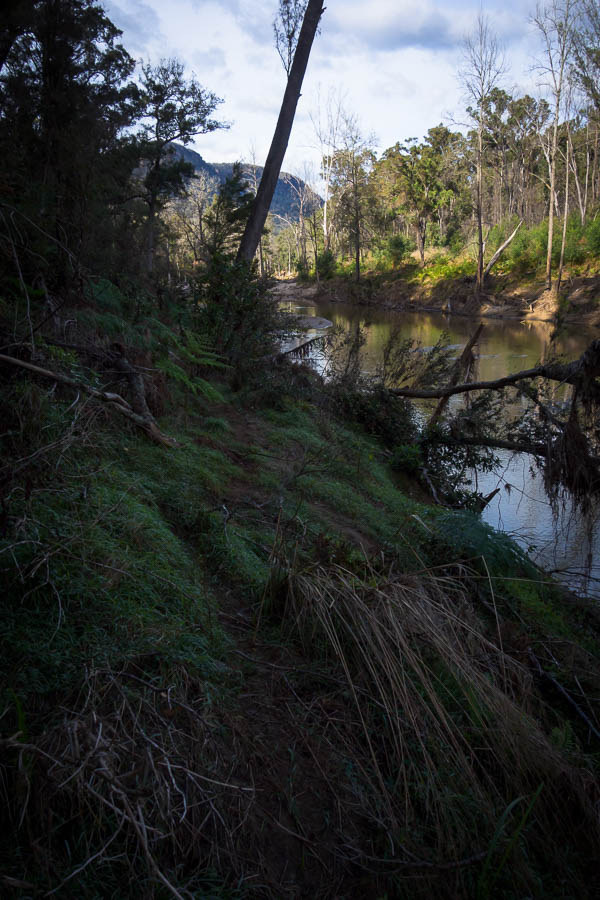 Pleased to have reached the confluence with Wanganderry Creek by morning tea time, I remembered how much I enjoyed the last time I’d been in this spot. 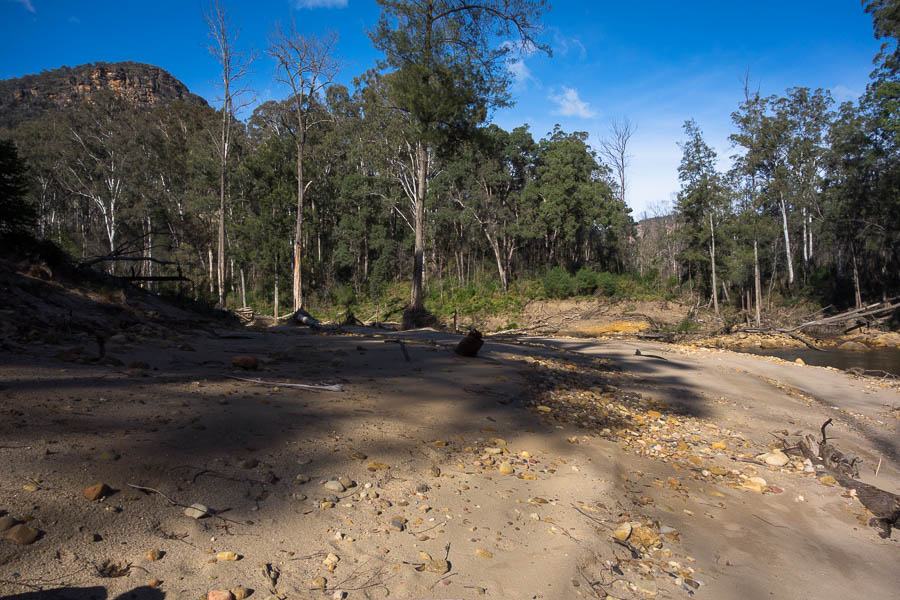 Confluence of Wanganderry Creek and the Nattai River

Not long after morning tea I gave up on keeping my feet dry. I was now back in territory I had visited before. A couple of wades to access a long sandbank in the middle of the river were definitely worth it. 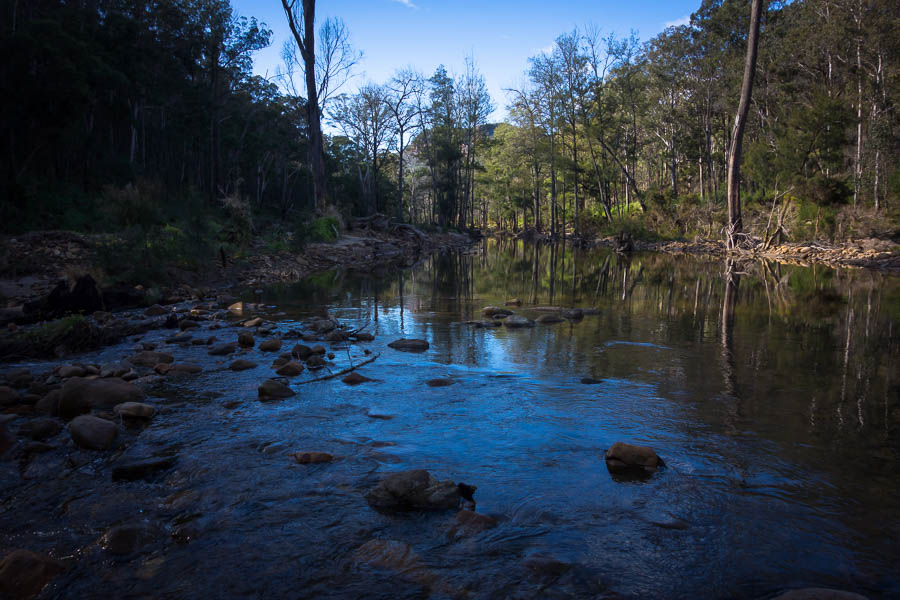 Finally gave up on keeping my feet dry

I wasn’t tracking my route so I’m not sure where I ended up in the final section leading to Emmetts Flat. If I had a trace at that point I think it would have been rather inefficient. Pushed away from the river, and trying to avoid vegetation, it seemed to take a long time to finally hit Troys Creek and from there Emmetts Flat.

The campsite is nothing like the one I visited so many years earlier – and was so enamoured by I contrived an overnight club walk just so I could camp there. I was somewhat bemused to see jonquils growing in clumps! 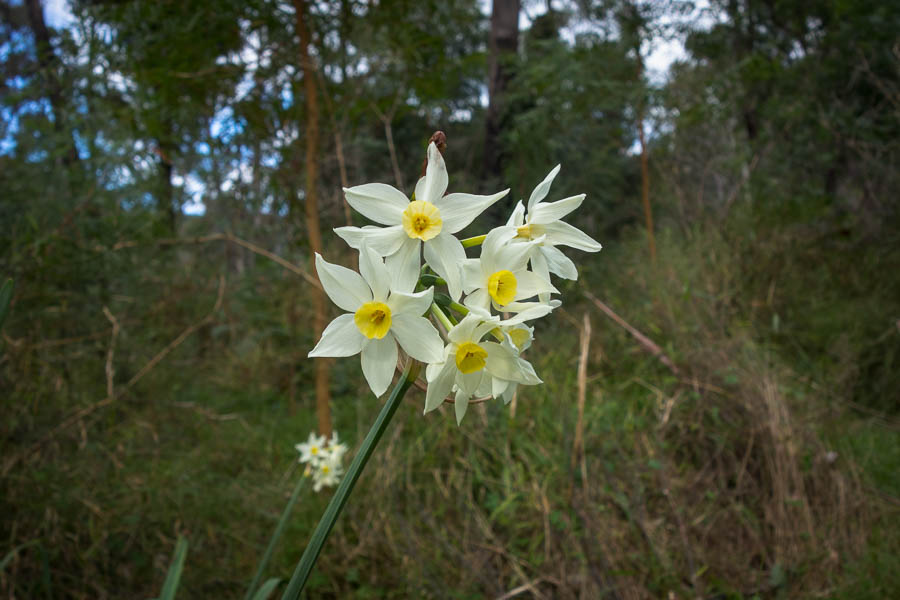 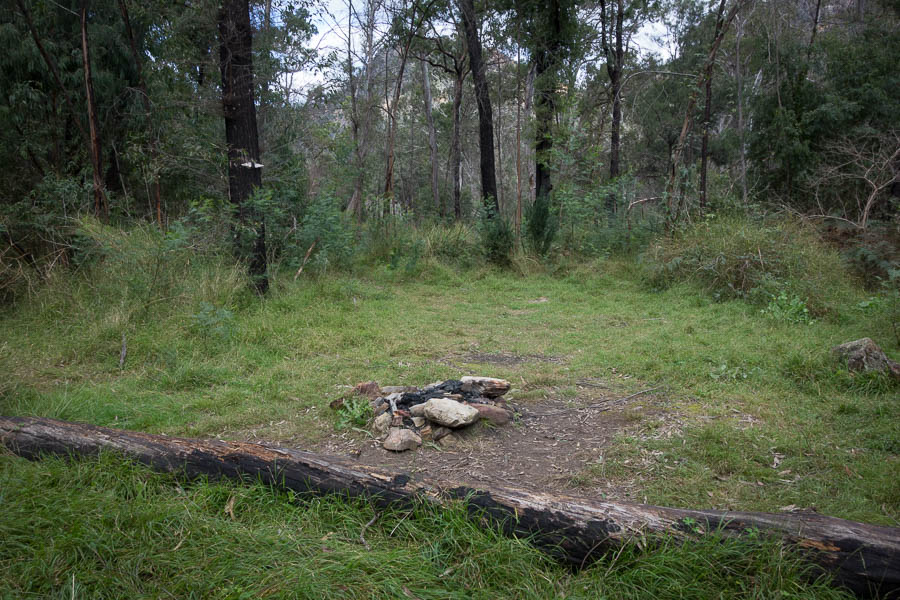 Campsite at Emmetts Flat a shade of its former glory

Leaving the campsite I struggled to follow the trail. I found fragments of it near the bottom, but then lost any trace of it going up the ridge. Referring to where it should have been on the map I was happy enough I was heading roughly where it should be. I found a large cairn which gave me hope. But still no sign. The exit was going to be quite a different proposition if the entire trail was gone!

After starting to sidle and meeting a couple of slightly disconcerting loose gullies I was happy to find the trail coming out of the rubble on the other side of a rockfall. It would be interesting to know how much formed track I missed.* 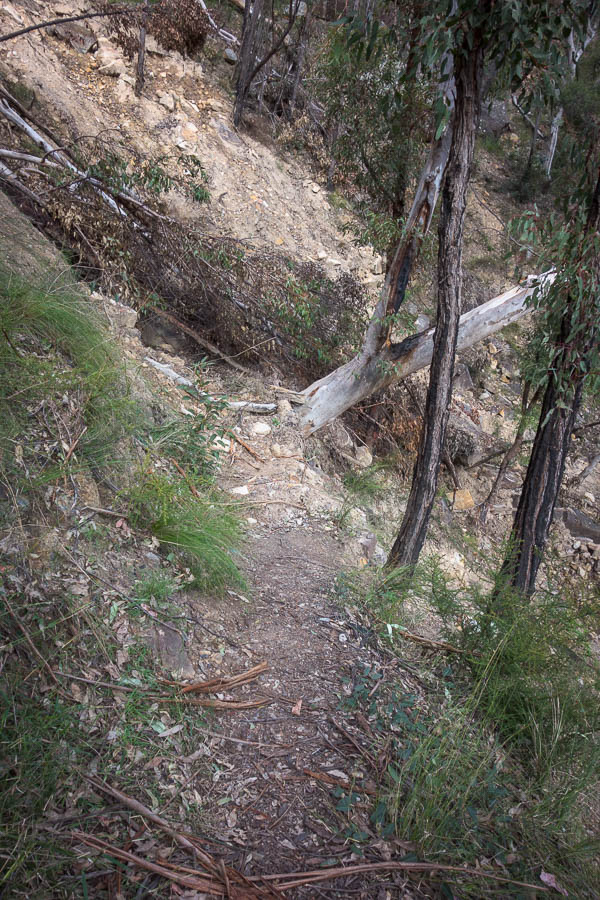 Some of the lower sections of Starlights Trail are quite damaged 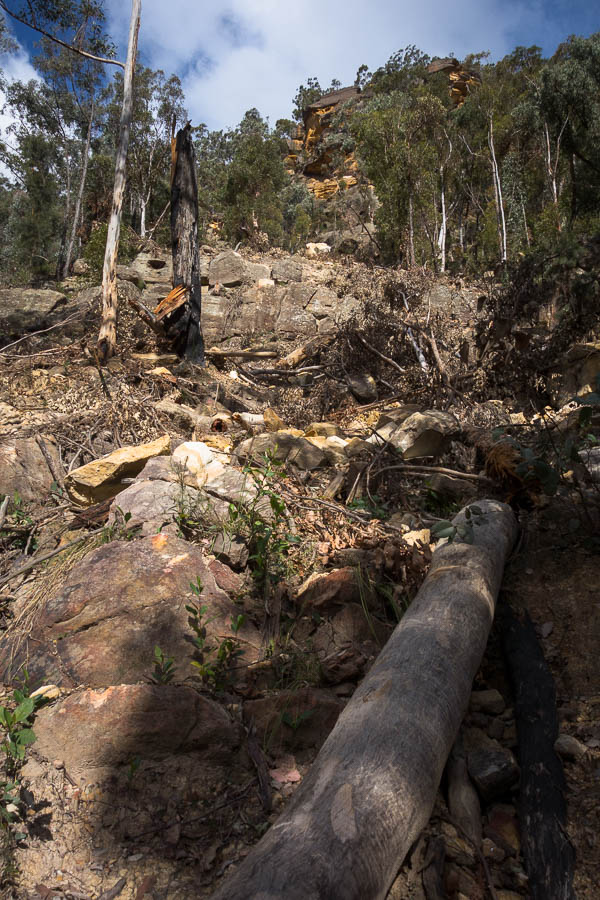 Looking up at another rockfall which came across the track

From there it was pretty easy to follow, though there were still a couple of slightly sketchy gullies to cross where rockfall had knocked the trail away. I was a bit surprised when I saw the only other people of the weekend, a group of 4 heading down around midday. Initially thinking they were going to camp but then I realised they only had day packs. I guess there was still plenty of time to get down and back up again.

I managed to walk off the track near the top – probably not the only one given there was a slight pad – but scrambling back up the slope I regained it without much issue.

From the top it was just the final fire trail bash back to the car park. Where I got an almighty fright as a large dog started barking at me out of one of the car windows. His owner, who was sitting the car, assured me it was just very friendly and excited be on his excursion for the day. They were still both sitting in the car 20 minutes later when I drove off!? And despite my fears of an after dark finish it was 2pm with plenty of time to visit a friend on the way home.

A great weekend out.

*A friend later confirmed she had followed it all the way down without issue the same weekend.