The forecast had been pretty adamant, and unfortunately unchanging, all week. Rain was coming and it was coming on Saturday and Sunday. Surely it would move out a day, or diminish, as rain forecasts so often so in NSW. But no. So, we seized the weather window and headed out early on Friday morning. We probably would have left a little later but for workday traffic to contend with! Subsequently our earliest walking start in a long time – packs on and on our way by 8:15am. 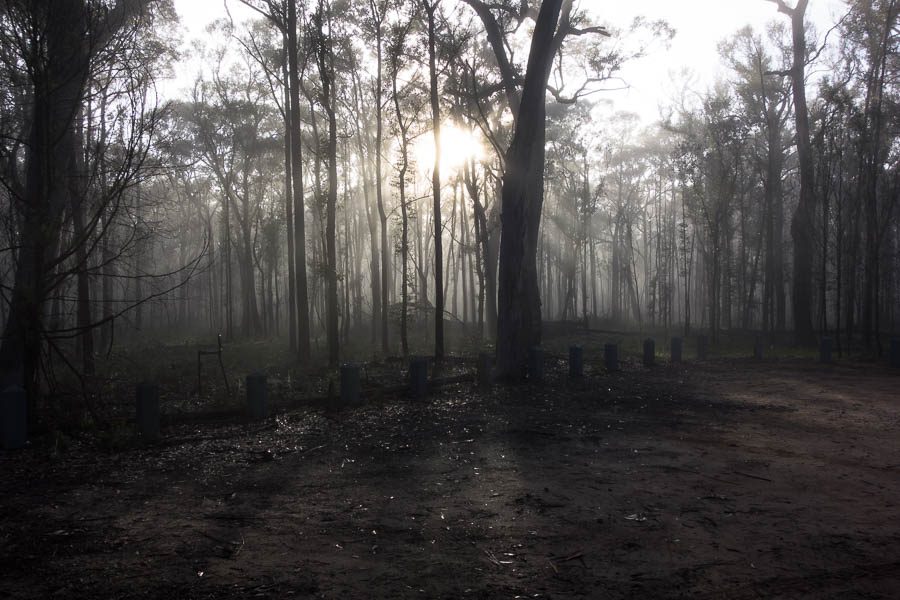 It was somewhat disconcerting walking in cloud. We were expecting it to burn off fairly quickly but eventually we got underneath it and began to be able to see a bit further than a few metres. We hadn’t walked Starlights Track since the fires, and it was almost like walking a new track. Being able to see the creek was definitely new. (which maybe had also had a bit of a scour-out from the floods?) 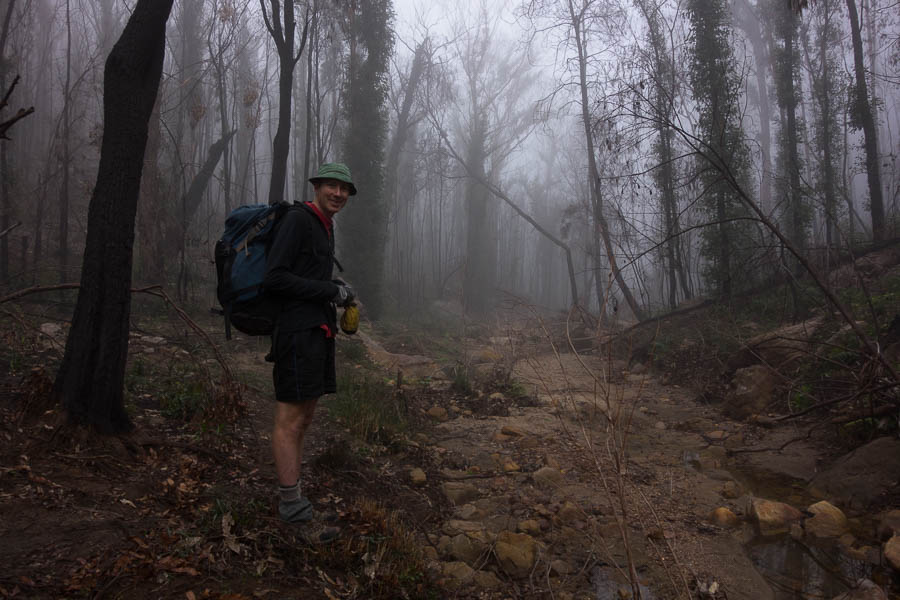 Walking in the cloud

We’d heard a rumour that Emmetts Flat (or the area which everyone refers to as Emmetts Flat which isn’t technically Emmetts Flat) had been ‘destroyed’ by the floods. I’d taken that to mean it had been washed away. However it is still there. It looks a bit different. The weeds are on steroids and taking over. It’s not quite the place I visited back in 2016 on a day trip which made me contrive an overnight trip just so I could camp there! It’s obviously still getting plenty of use judging by the amount of campfire ash. 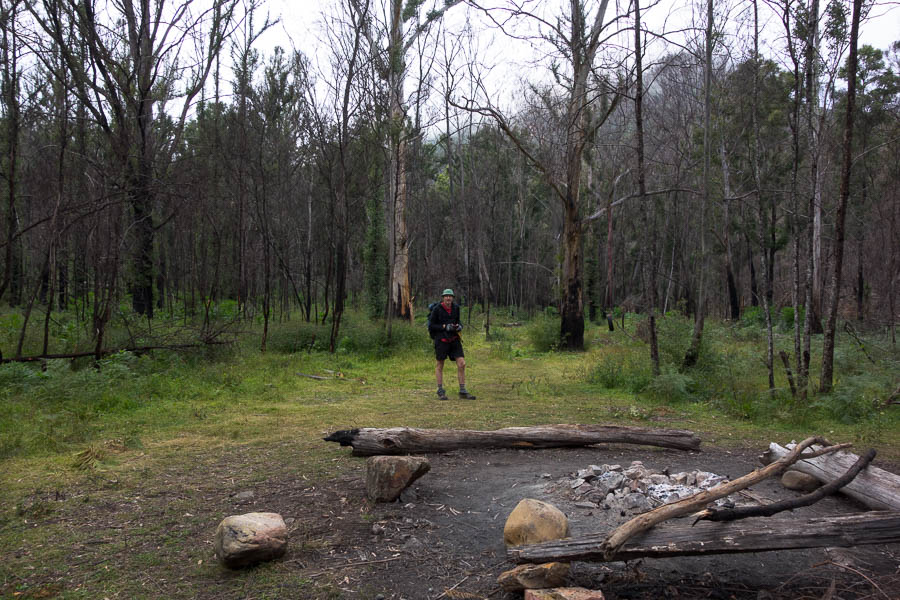 Unfortunately the weeds have taken over much of Emmetts Flat

After filling up water at Troys Creek we headed downstream on the Nattai. We were now in new territory. The going was pretty easy, alternating between walking on the sandy river bed, or following wombat trails on the slopey embankment. The cloud had gone, the sun was shining and there was no wind. Another stellar day in the Nattai. 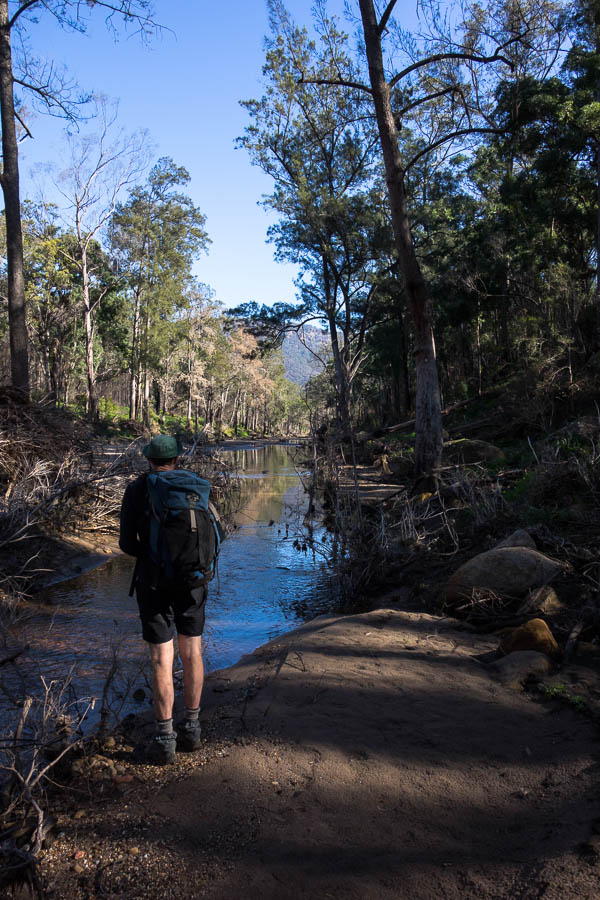 We liked the junction of the Wanganderry and Nattai so much we had an early lunch. Though to be fair breakfast had been at 6am. It felt a little like those magical places in books where a sleep spell has been cast and all you want to do is lie down and have a nap. (Un?)Fortunately for Tom I was there to break the spell, crack the whip and keep us going! 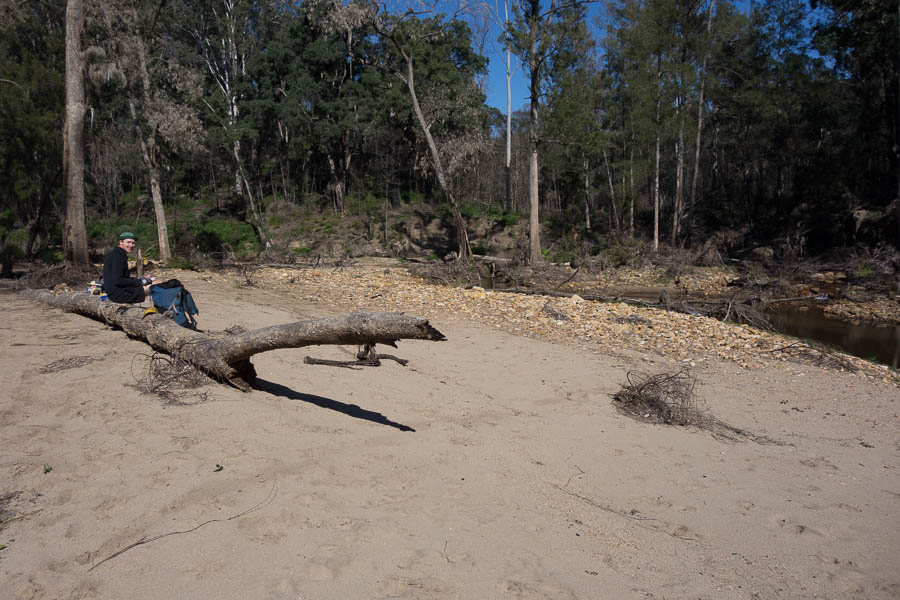 Lunch at the junction of Nattai River & Wanganderry creek 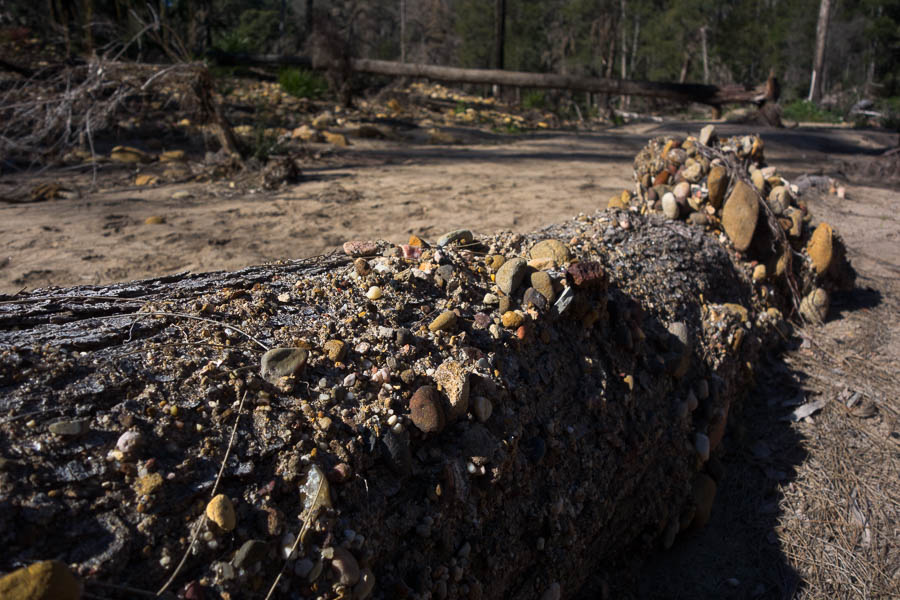 Having descended into the valley we didn’t plan on staying there. We had to climb back out again for our intended high camp. It was a warm winter’s day, and a drink was welcome when we found a flowing side creek just before the climb started in earnest. 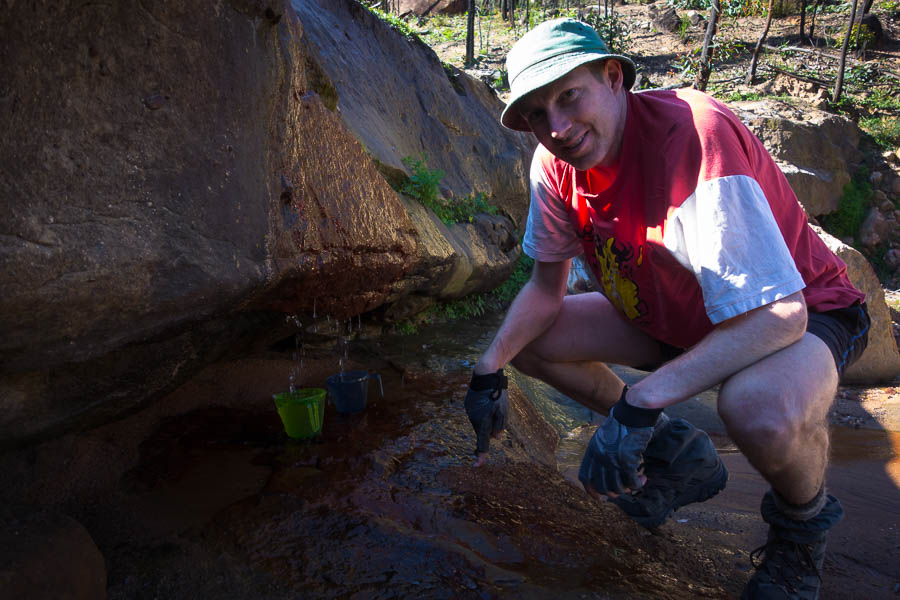 I felt like I was crawling but eventually we plodded our way up the spur. These high camps definitely have their downsides with needing to lug water! 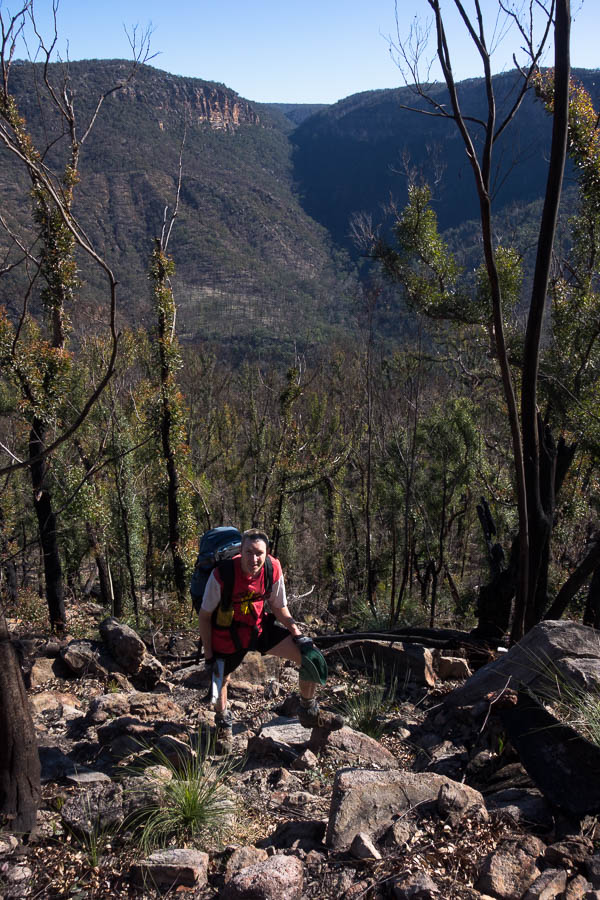 Almost at the top

As far as 500m climbs go it was a pretty good one, with some easy scrambling to get up through the cliff line. At the top we headed out to the end of a point where there was a fabulous rocky outcrop. Once again the combination of sun, no wind and sleep was mixing to cast a spell of inertia. But we still needed to find a campsite for the night, so back to the packs we went. (In retrospect I wish we’d just taken the packs out with us and camped there!) 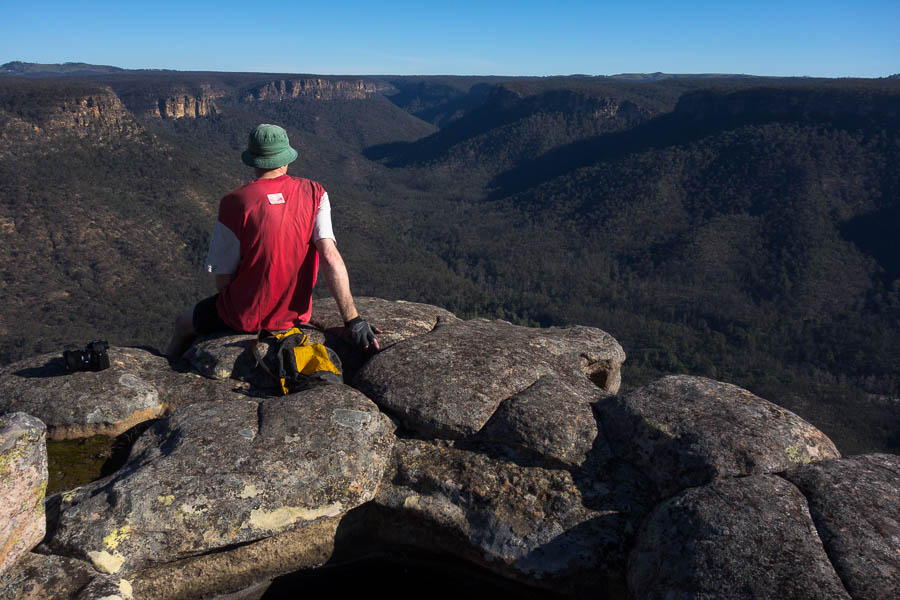 Speccy look-out. With its own pool

We were both pretty tired by now. The spot Tom had chosen from the map for a camp didn’t seem that far away, but my legs felt differently. It was relatively slow going as the fire had been of low intensity. Then we missed the turn-off and ended up on the next ridge. 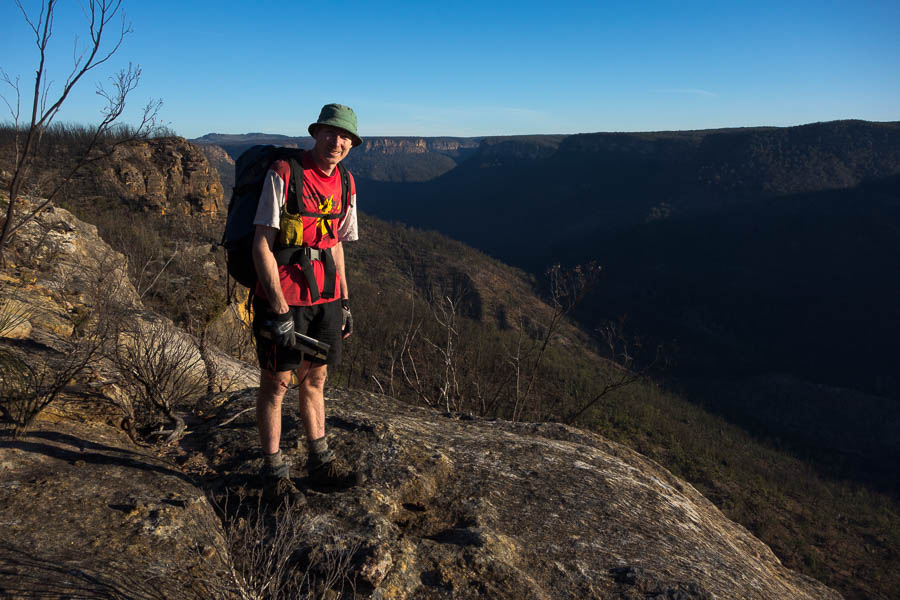 Backtracking we found an amazing happy hour spot. Just lacked any good camping near by… A few minutes away we found a flat spot amongst the trees which would do. Despite our early start we didn’t have long till sunset. We enjoyed the views and lack of wind before retreating to our camp for a surprisingly mild evening around the campfire. 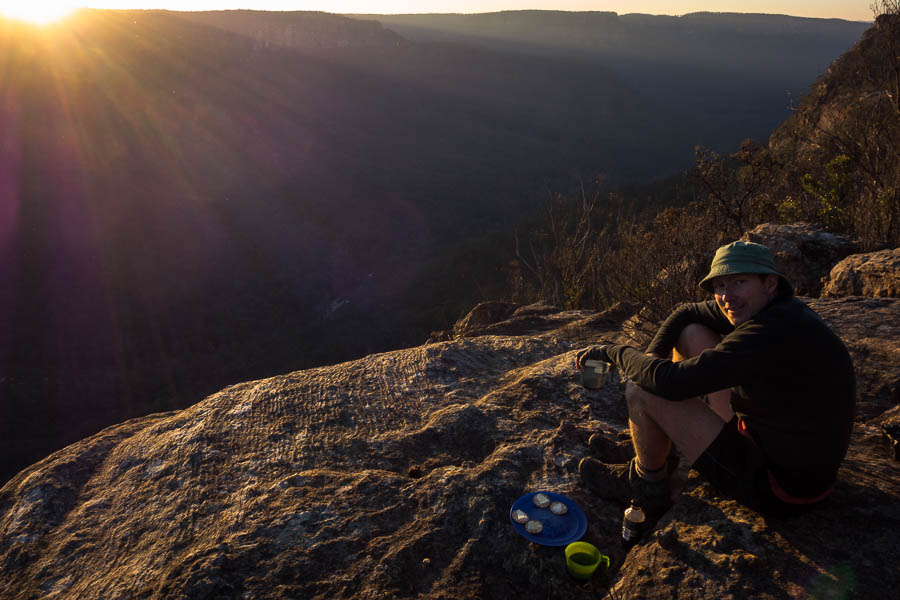 We were woken by the planes overhead, presumably on their way in to land as soon as the curfew ended at 6am. I don’t know how many planes it would have been pre-covid but it was only 2 this morning. Tom got up to go and check out pre-sunrise, but from what I could see it wasn’t worth getting up too much before sunrise. As I arrived at the cliff-edge the cloud apparently rose out of the valley when previously the cliffs were visible.

The cloud obscuring everything at least meant Tom was focussed on eating breakfast rather than taking photos! It teased us for a bit, revealing cliff tops and then hiding them again. Eventually some good views opened up. 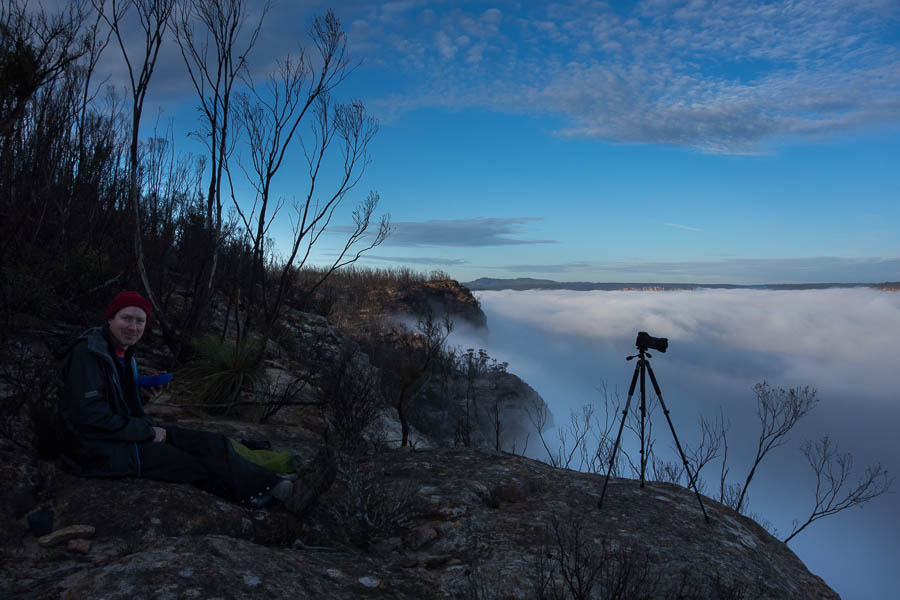 Still, it was a pretty good breakfast spot in the end

We had agreed to get moving fairly early since the BOM forecast was for rain to come through from late morning (though the Norwegians didn’t have anything in the area till after 6pm). But with the “atmospheric conditions” (i.e. photo faffing) we didn’t get moving till 9am. 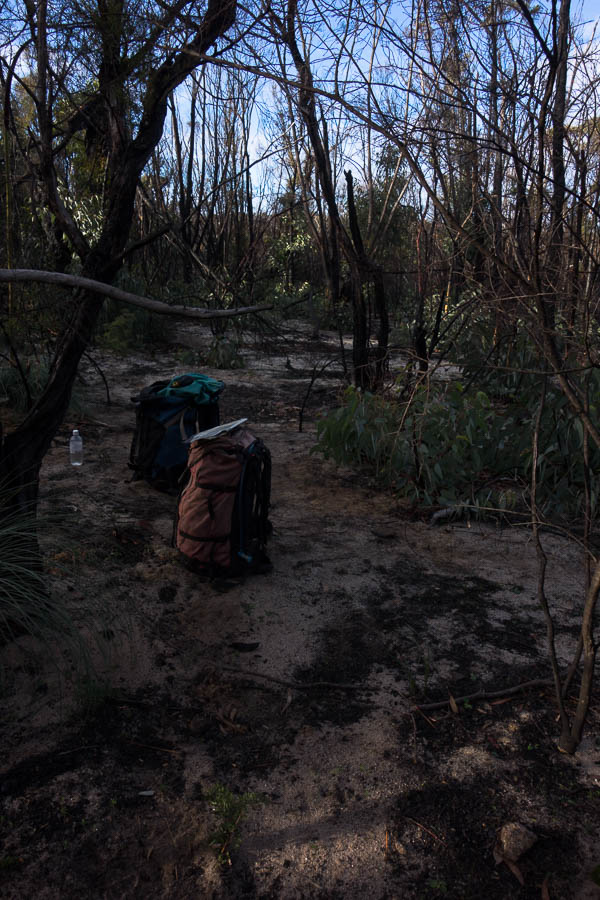 The campsite was nothing to rave about

We headed out to another viewpoint before following a series of ridges to a fire trail we’d walked on a previous trip. You don’t realise how slow you’re moving, even on relatively easy, off-track until you get onto a fire trail! The fire trail was a slog which we broke up with lunch. No sign of any rain by the time we got to the cars in the early afternoon, though it was on the radar in the north. 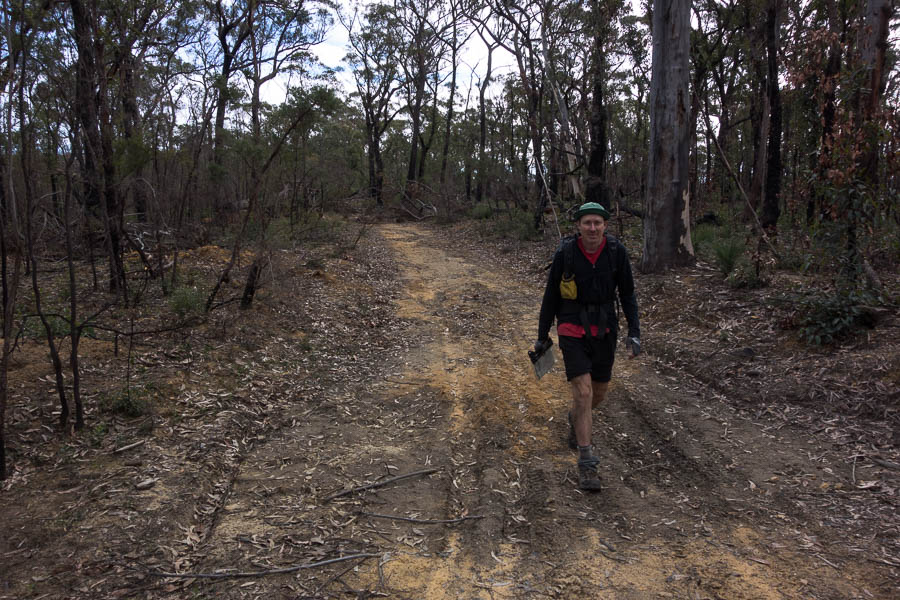 Not all cliffs and views (sadly)

Another great weekend in the bush, very confusing to be home mid-afternoon on a Saturday despite being out overnight.