By early April, Sydney and surrounds had already received an average year’s annual rainfall. With the combination of bad weather, deteriorated road access, lack of motivation & softness, we’ve barely been out overnight since the lockdown lifted in October last year. It was with much amazement the 7-day forecast for Easter showed fine weather… which stayed fine. No excuses this time, we had to get out. But given our lack of belief in the weather we had no forward plans, and as has become far too customary of late we were putting together ideas a couple of days beforehand.

Many National Parks were closed due to the 100mm+ of rain the previous week, or the roads into access points were closed. But, as always seems to be the case, the Nattai was open. I do wonder at times whether the person in charge of putting up notices about the Nattai just doesn’t know how to do it? That or it truly is the forgotten National Park. Anyway, I shouldn’t be complaining since it’s been our go-to for the last few years.

Access to different parts of the Nattai can be problematic. I wasn’t in the mood for throwing the dice with access, so we settled on going in from a spot we’d used for a short walk only a couple of weeks earlier. Another advantage of the Nattai is the drive is very reasonable compared to places like Kanangra, Newnes or many parts of the Wollemi. Subsequently it wasn’t a particularly early start on Good Friday, yet we were still walking around 8:30am.

After an hour on the fire trail, we headed off track, hoping we’d be able to get down one ridge and up another to give us access to the Wild Goat Plateau. 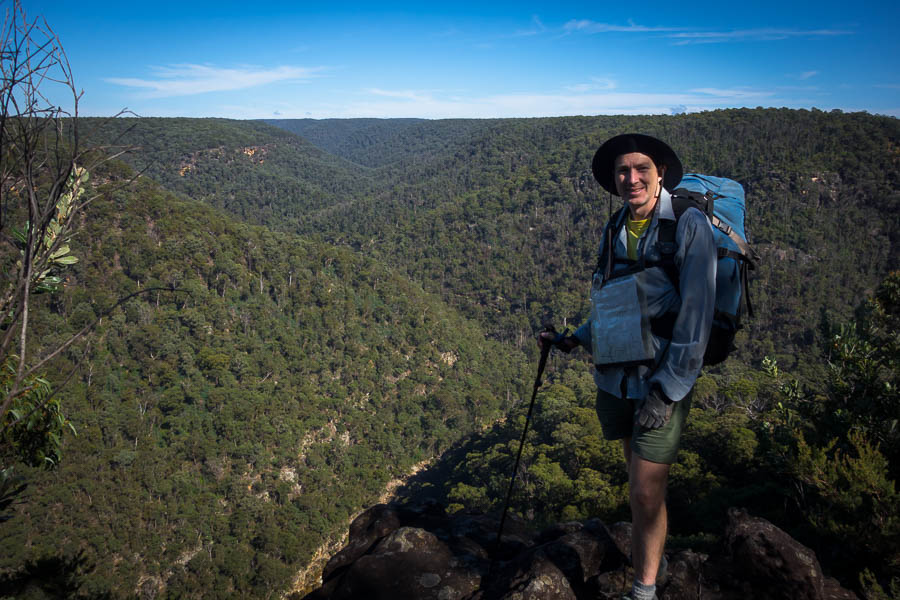 Views of the ridge we’re planning to climb

The descent to Little River was unproblematic, with just one short slow section of scrub. We enjoyed morning tea on the picturesque bank having made a thigh-deep crossing. 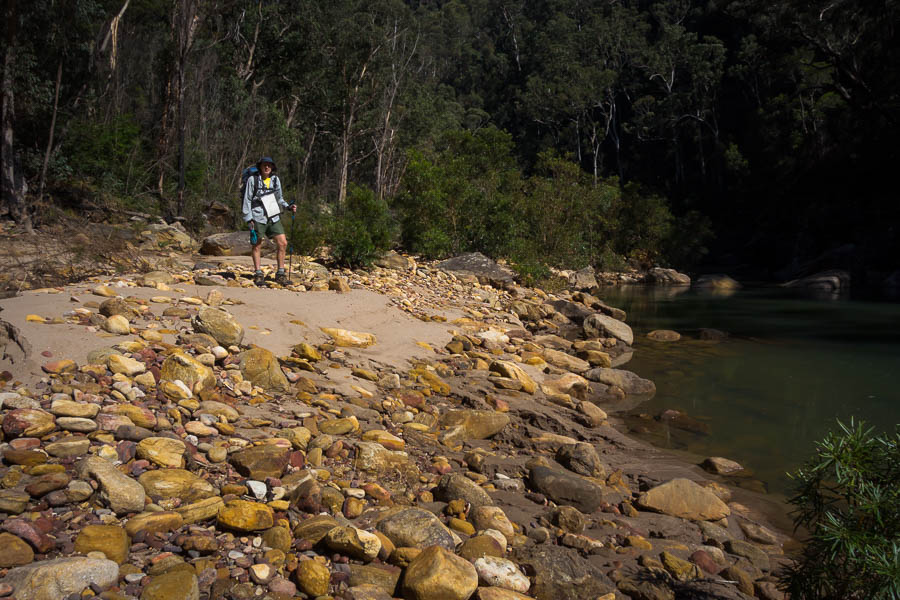 The ascent up the other side started off really well. It was a thoroughly enjoyable climb until about two-thirds of the way up when we hit a serious section of scrub. After wrangling vines, head-high incense plants and deadfall, we emerged near the top. Fortunately there were a couple of nice lunch spots to aid our recovery. 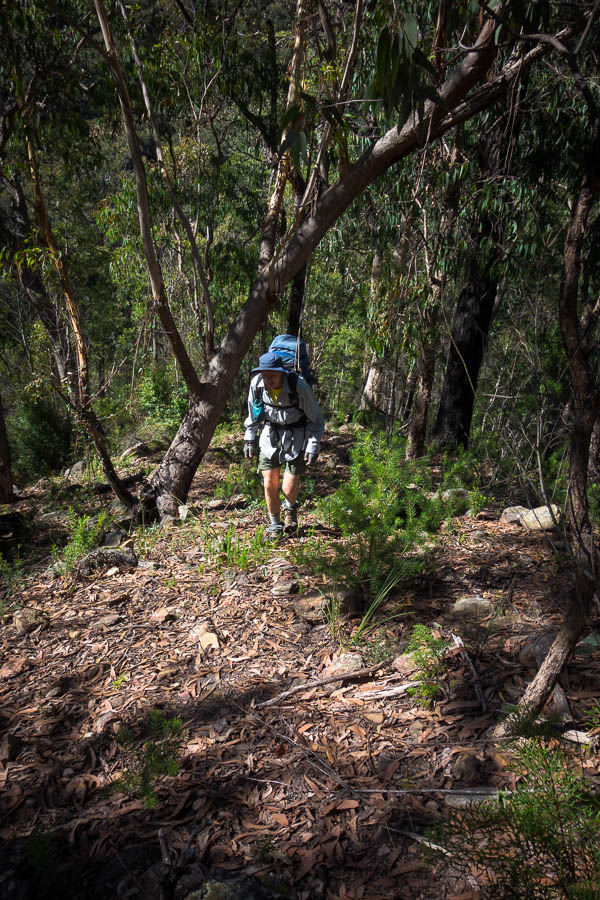 The ridge was pretty nice walking for the first two-thirds 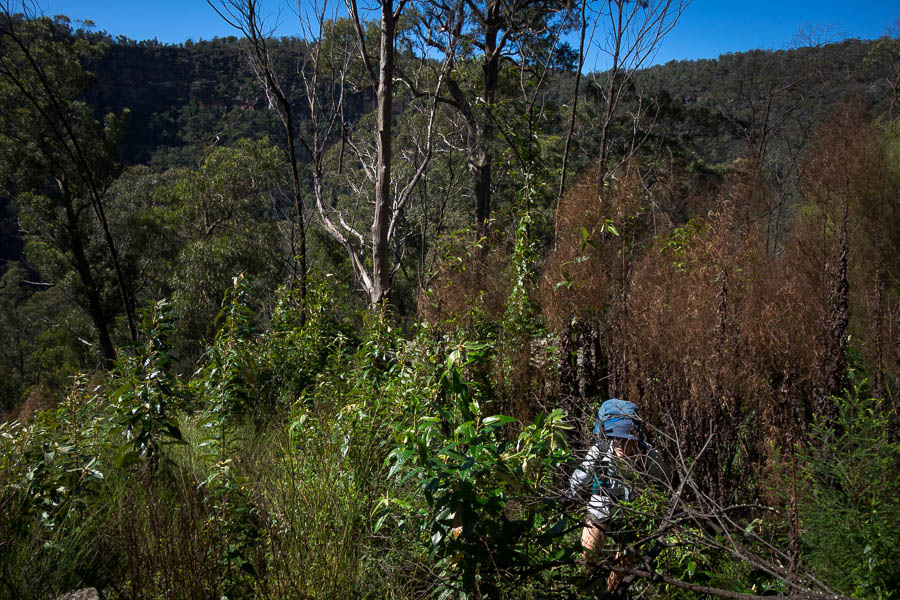 And then not so much

Our end point for the day was a spot I had picked out from the map. Normally Tom would have done some forensic examination of the aerials in advance, but I don’t think he was even listening when I’d proposed the spot at home. So we were both very pleasantly surprised to find ourselves in a lovely rocky section with spectacular views over Martins Creek. Flat campsites needed a bit of hunting for, but fortunately we were only looking for one. 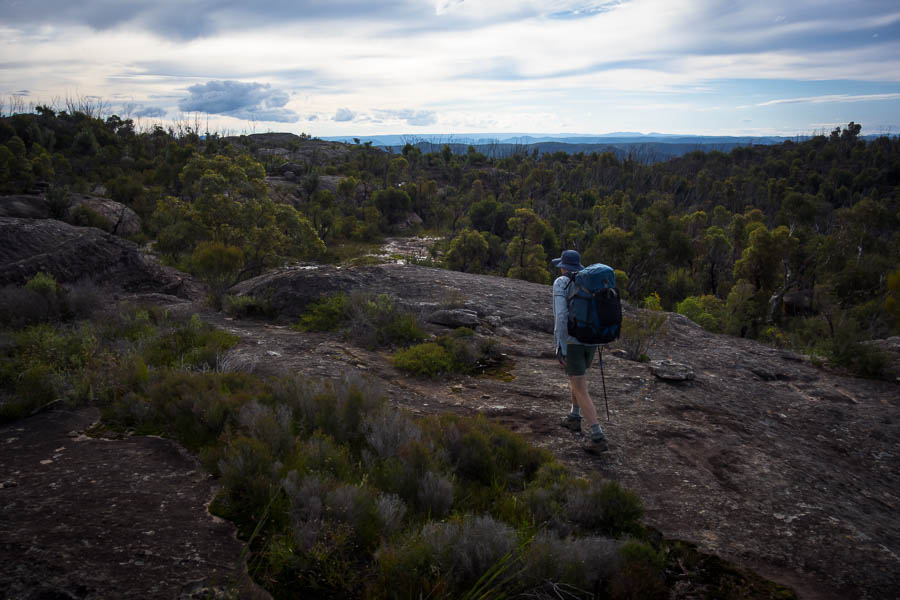 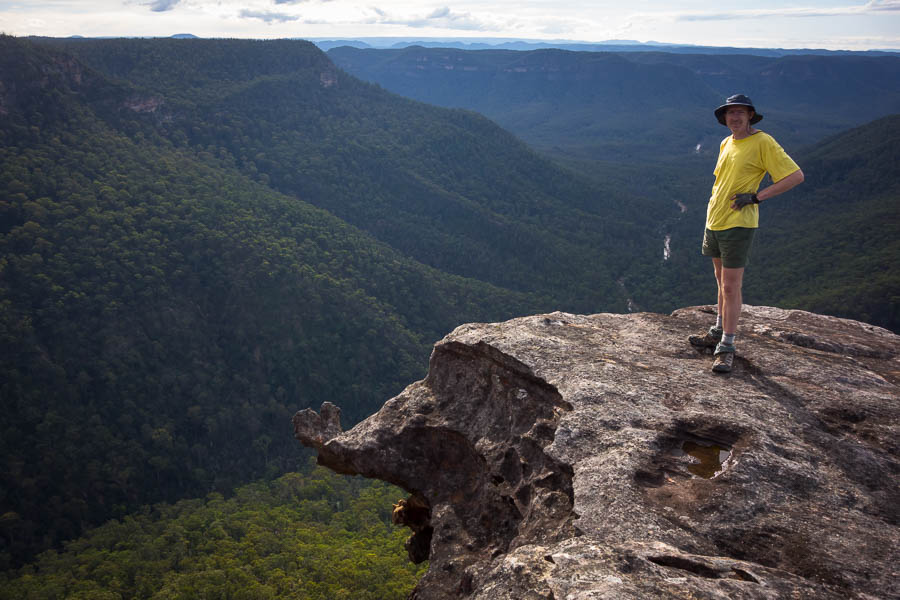 Pretty pleased with our views for the night 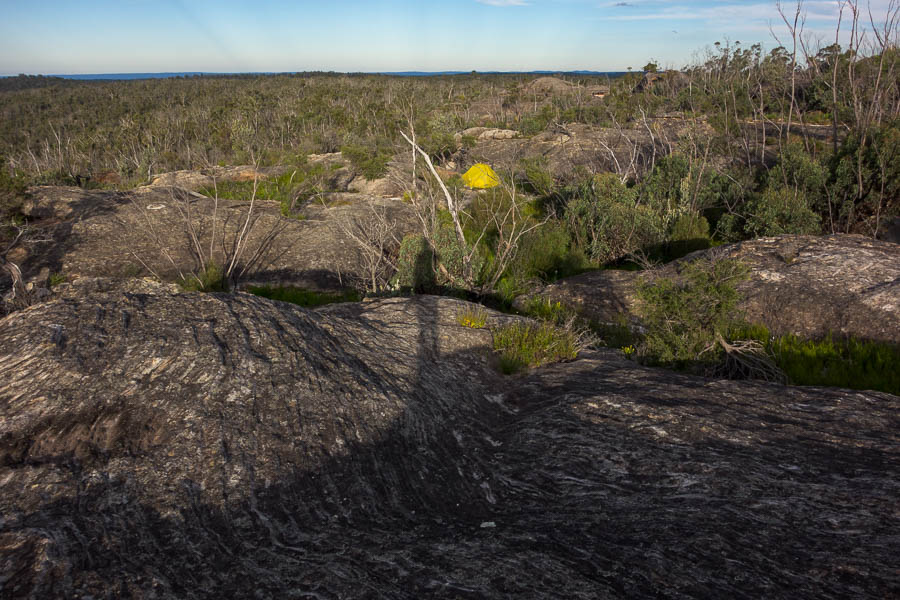 Camp amongst the rocks

Feeling very pleased with ourselves after a successful day, we luxuriated in the views. Tom’s photo gear got a work out. His unprocessed photos (at time of writing) look so much better than any of mine – that hopefully anyone looking will see these first and not have the comparison! 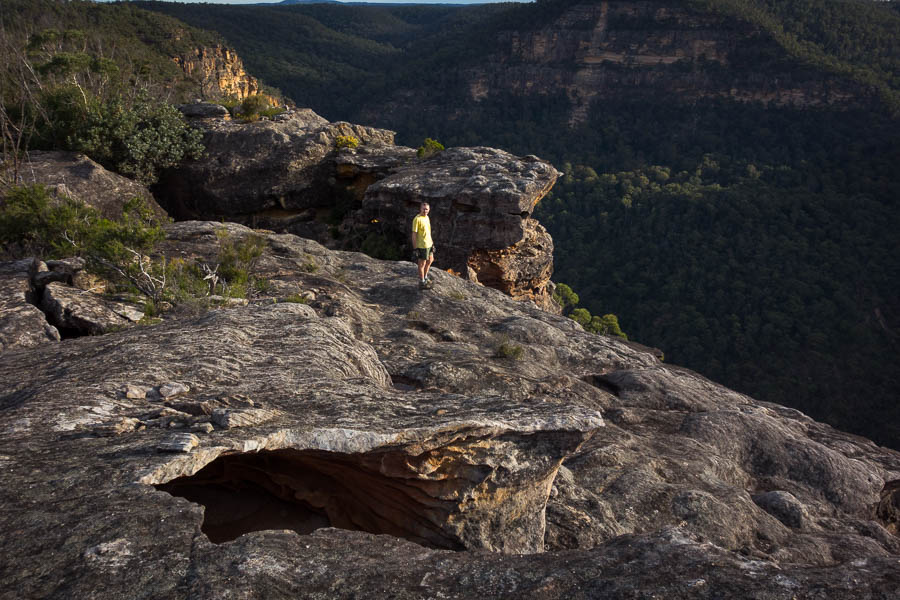 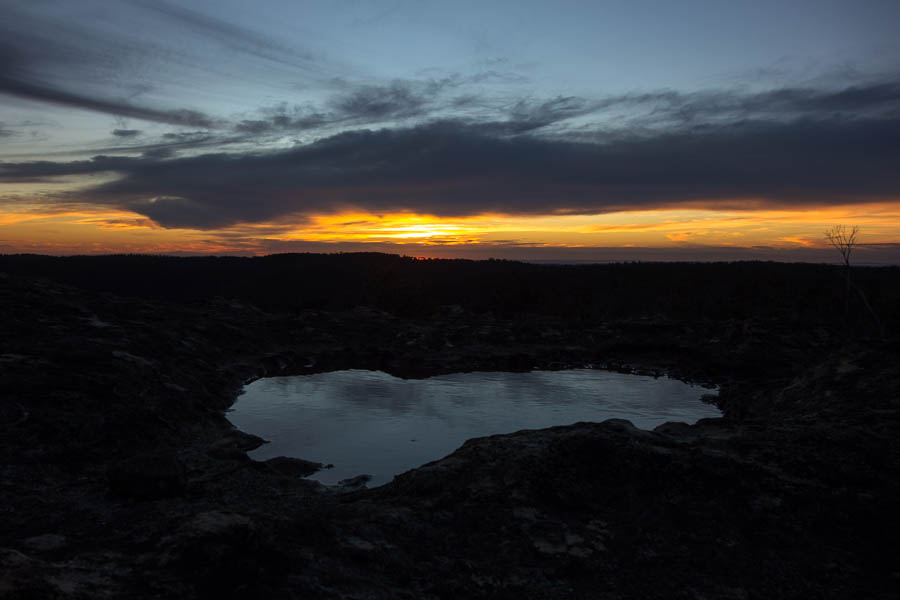 Speccy sunset with our mini-tarn 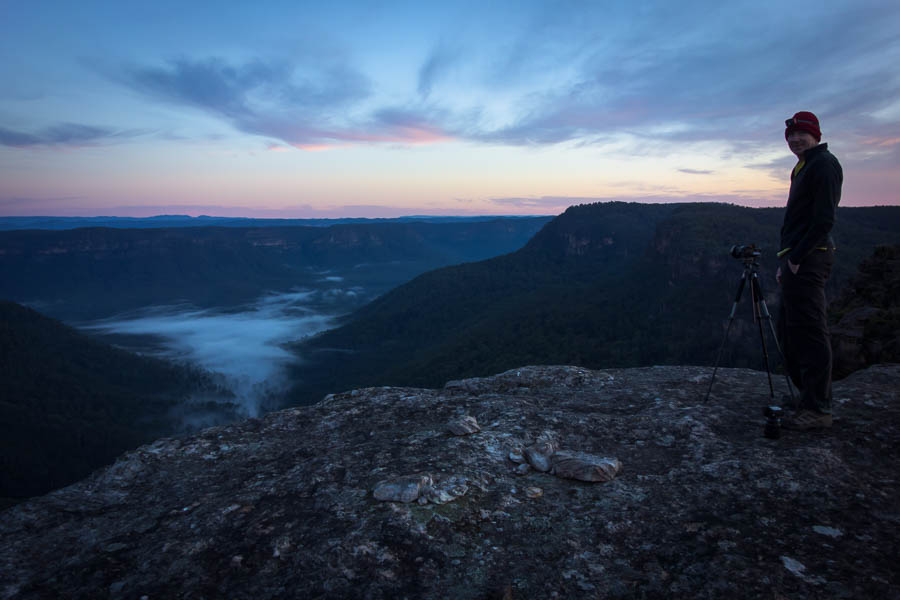 Dawn and some valley cloud 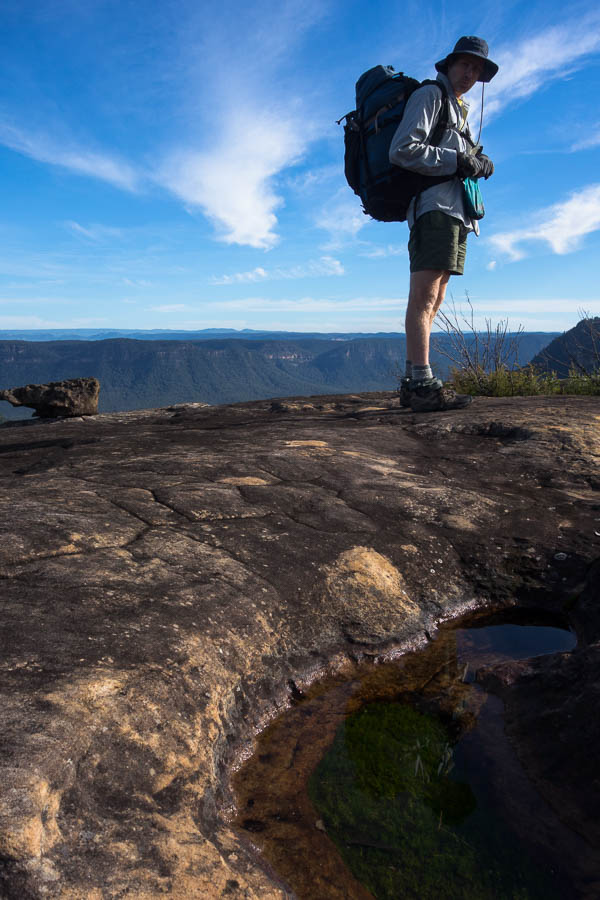 Unsurprisingly there was plenty of water about

The next day we stayed off track, dropping down a spur, across a small creek and up another ridge to pick up another fire trail. After a not particularly inspiring off-track foray for morning tea we stayed on the fire trail till it ended. There was a nice viewpoint where we decided an early lunch was in order. We were somewhat surprised when we had company – though not as surprised as The Other Tom (as his name turned out to be)! We had the warning of his approaching footsteps, whereas he was plugged into a podcast and so had no warning until we were suddenly in his sights. He immediately recognised me from Tom’s website photos, and we had a good chat over lunch about many things bushwalking.

Leaving The Other Tom for his return 15km fire trail bash, we left the fire trail and headed north. The next couple of kilometres was some of the most soul-destroying scrub bashing I’ve done in a while. 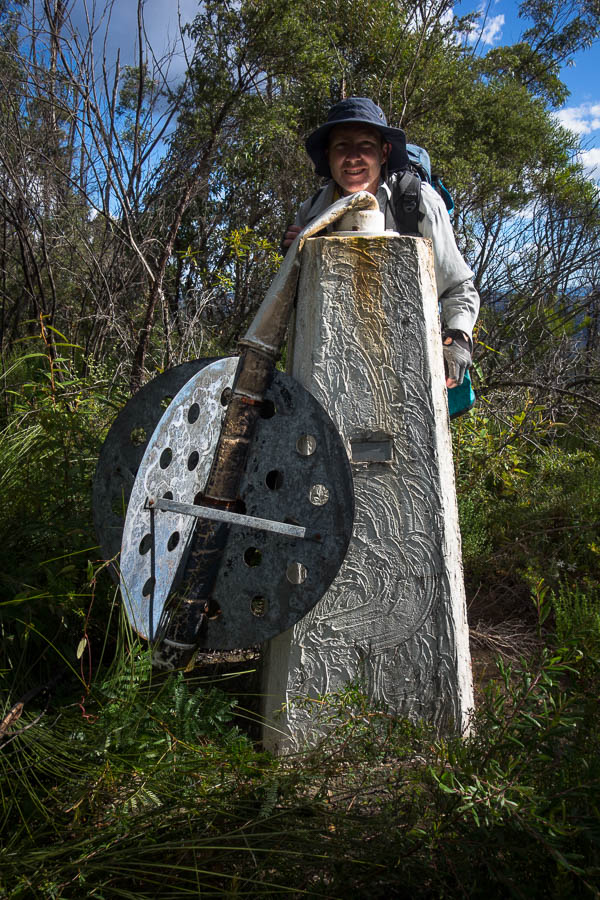 Nattai Trig appears to have melted in the fires

Eventually we got through the worst of it and were soon to arrive at a spot we’d camped at a couple of years ago. We didn’t have great hopes for it given the amount of regrowth we’d experienced, but it was even worse than we expected. This was not the spot we were looking for.

I’d not paid much attention when Tom had suggested where we’d end up for the night, and he hadn’t cross-checked the previous trip’s log. After looking at the info we had, we realised were still over a (off-track!) kilometre from where we had previously camped. Agh. And it was 4pm. The spot we were at appeared to have no camping, so I thought we were going to need to keep slogging. Fortunately Tom made us have a look around and we managed to scrounge up what turned out to be a reasonably pleasant site for the night (once again, just as well there was just one tent we were trying to find a spot for). 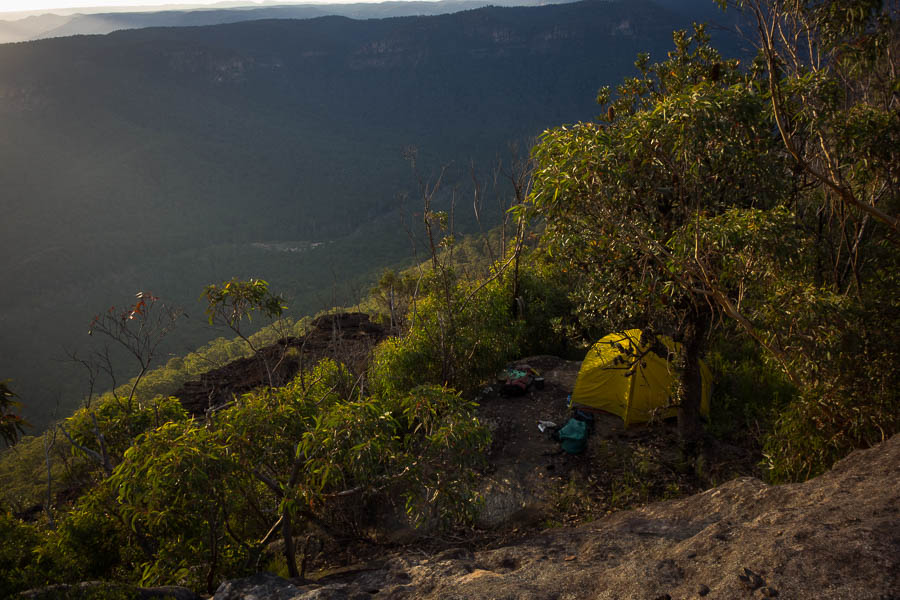 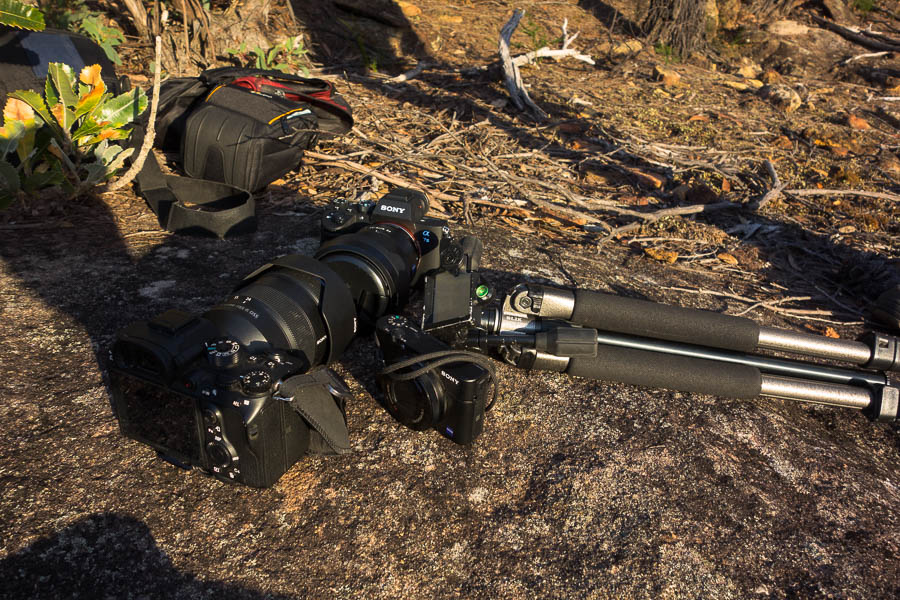 I wonder why Tom’s pack was so heavy? 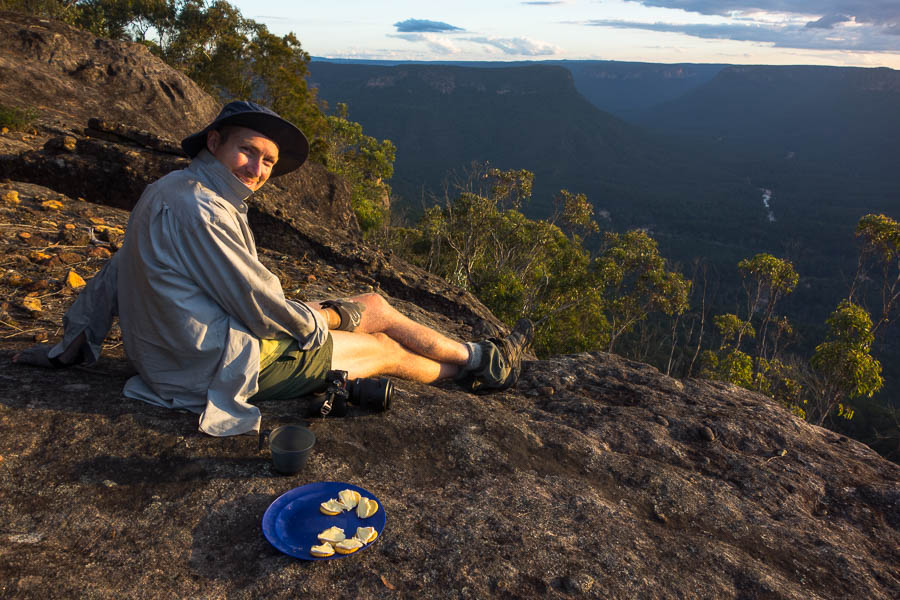 The afternoon had disabused us of the ambitious plans for the amount of ground we had been planning to cover over the next 2 days. Staring at the map we realised we needed to start heading back towards the car the next morning. Yet another thing that Covid took from us – a season of bushwalking in low scrub country!

So on day 3 we headed off on another ridge, vaguely in the direction of “home”. Fortunately, the ridge was “average” scrub so it only took us a couple of hours to cover a couple of kilometres, some sections of it were actually quite delightful. We would have made better time if we had been paying any attention to the compass and not ended up at the top of a cliff having taken the wrong spur. 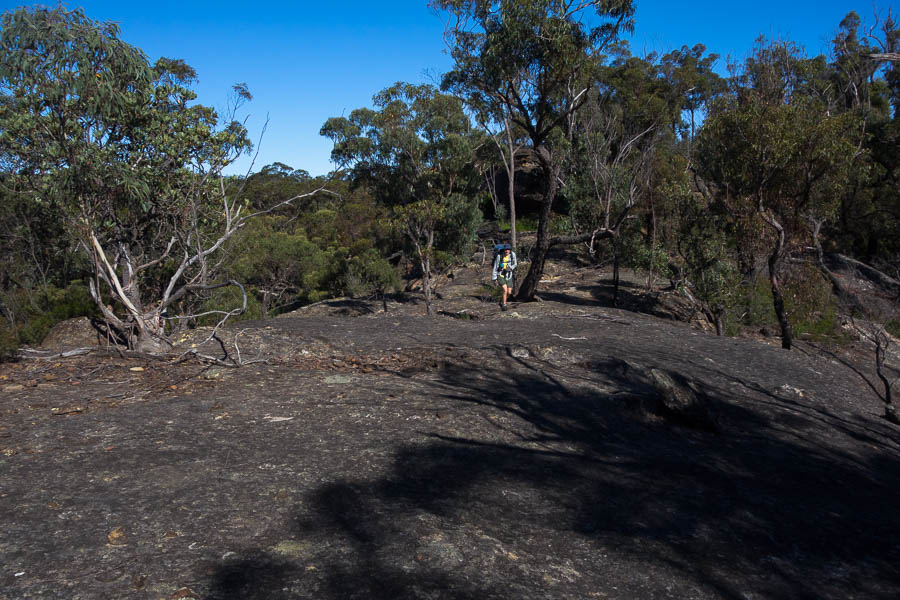 A late morning tea on the creek was lovely, though neither of it were under any illusions about how much work was still left in the day. 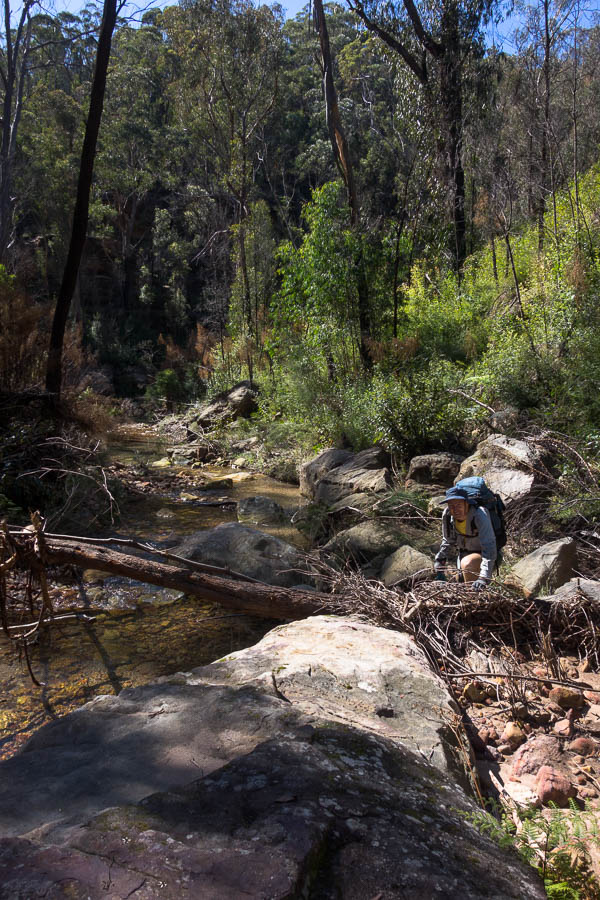 We opted for a change of scenery, and hopefully easier walking, by staying in the creek. It was a nice change, though not cleared by recent flooding as much as we might have hoped. 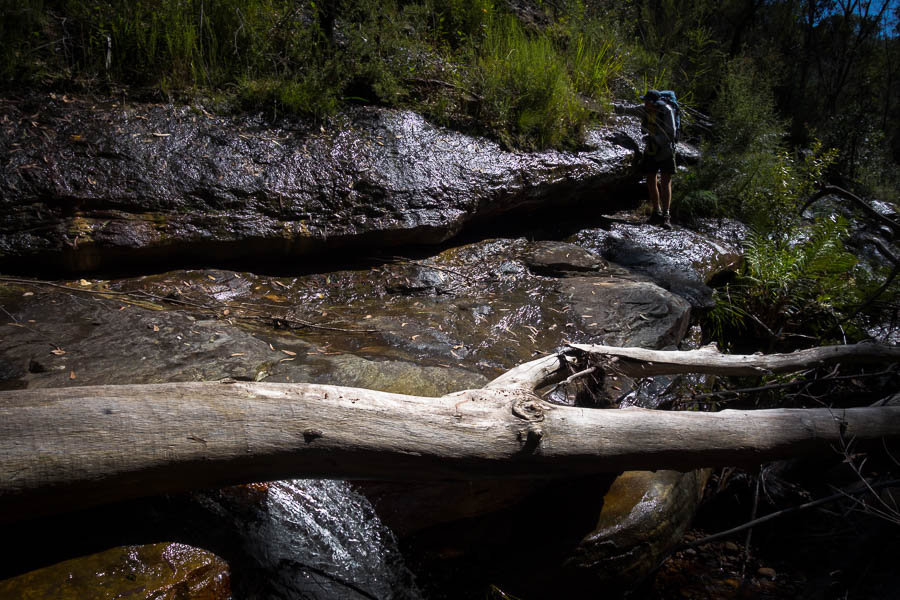 After lunch at a nice spot we landed on the fire trail. Now it was decision time (or was there really a decision to be made?). 10km of fire trail bashing to return to the car the way we came in, or 1.5km of fire trail and 4km off-track along the ridge, and take a different spur back to Little River. Both of us would normally go for the off-track/different route, but so badly beaten were we, that 10km of fire trail won out. My flayed knees thanked me for that decision as we pounded the fire trail for the rest of the afternoon.

On the plus side we had a nice camp, with yet again more good views. 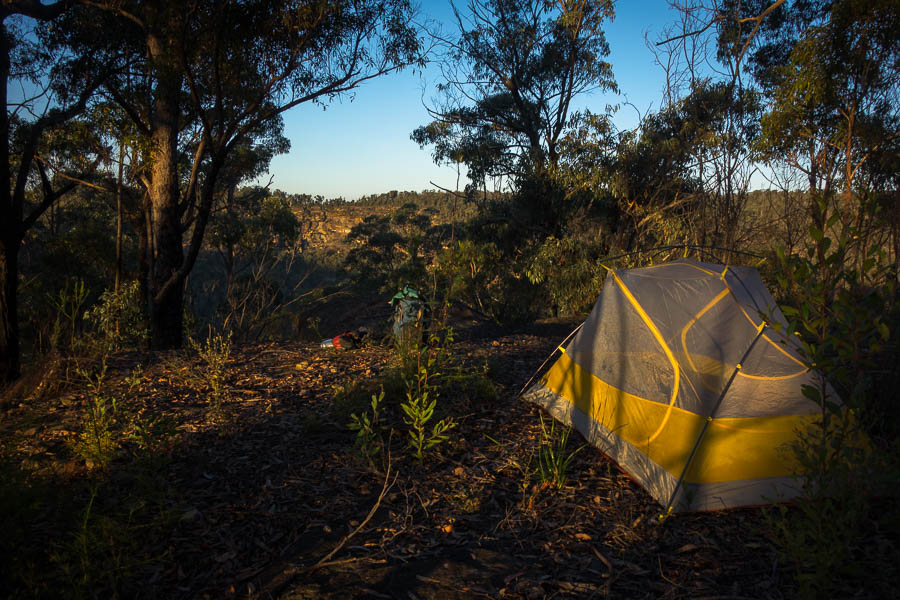 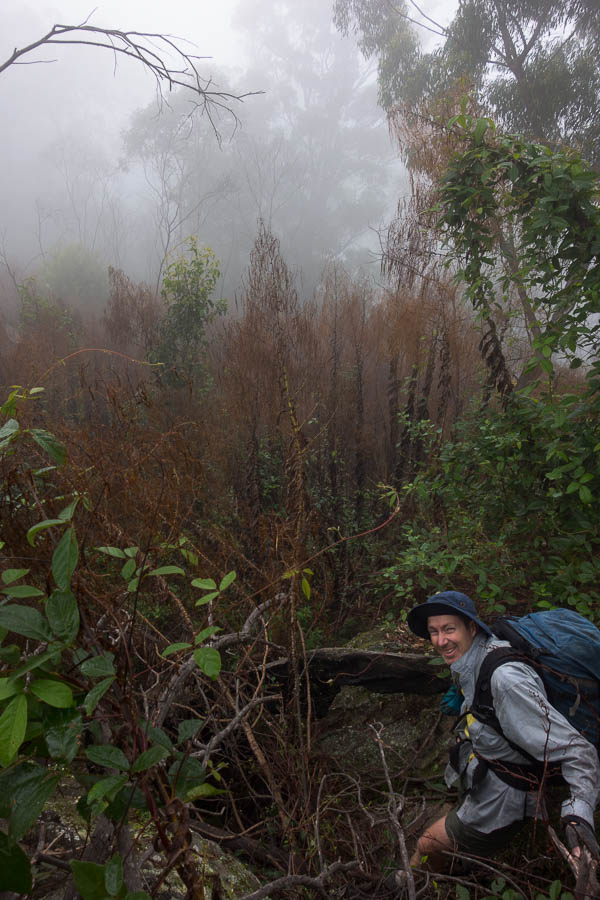 Back in the scrub

Tom had built up the “bad” section of scrub on the ridge, so we were both pleasantly surprised when it really wasn’t that long. It probably helped we could largely follow the route we’d used on our way up – and that it was first thing in the morning. The rest of the ridge was lovely and it wasn’t long before we were back crossing Little River. 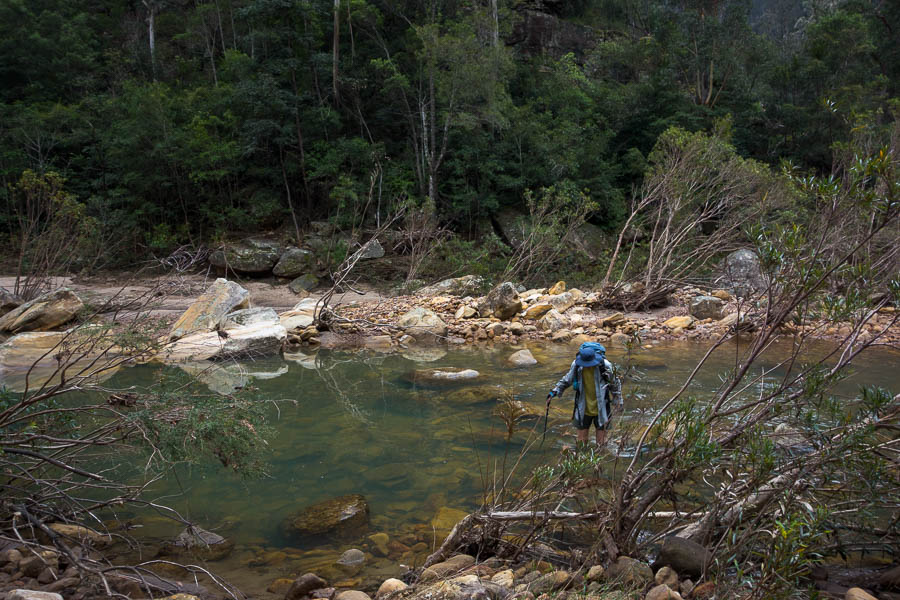 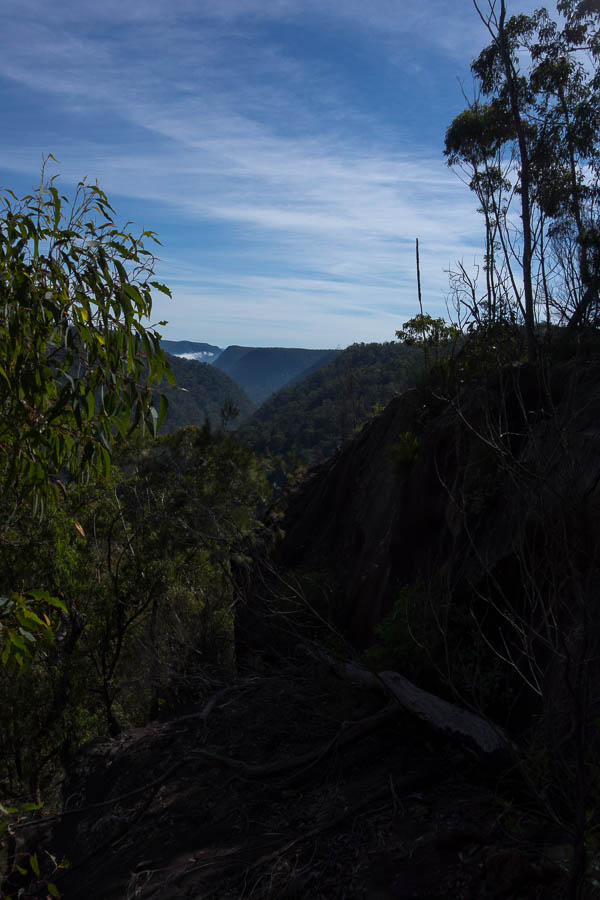 The plants that particularly became my nemesis during this trip are shown below. They don’t look overly vicious – there are no thorns, but they have the texture of sandpaper. Constant pulling up through them would fit into any medieval torture textbook. 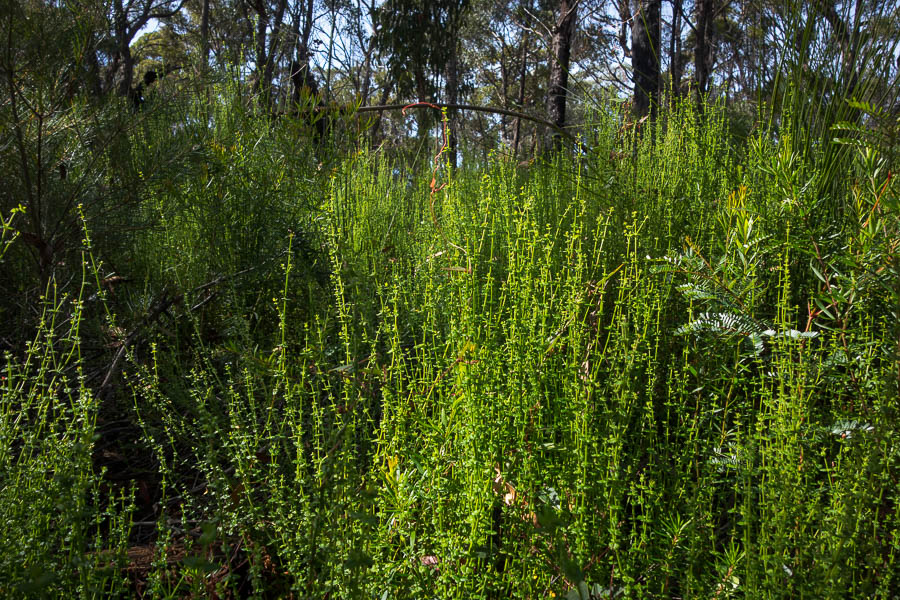 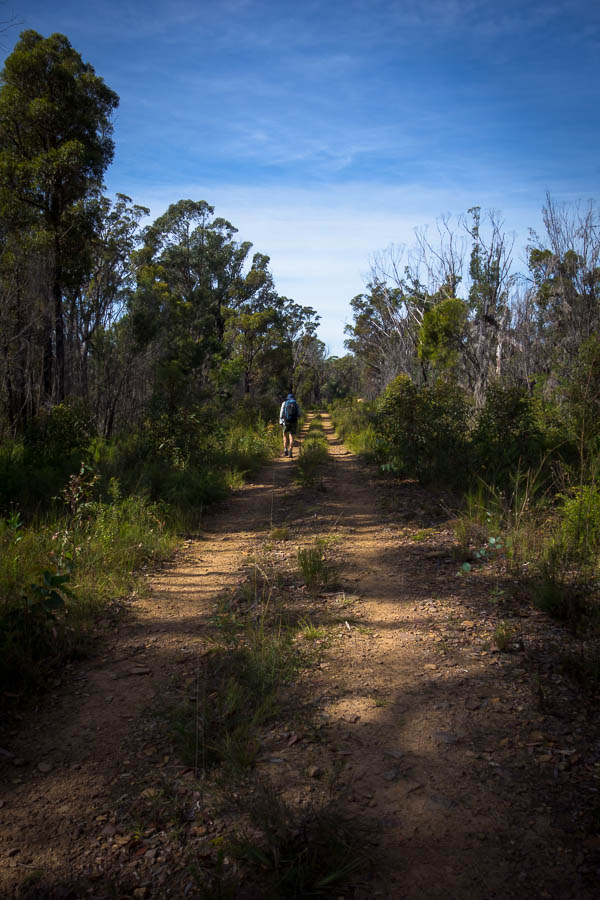 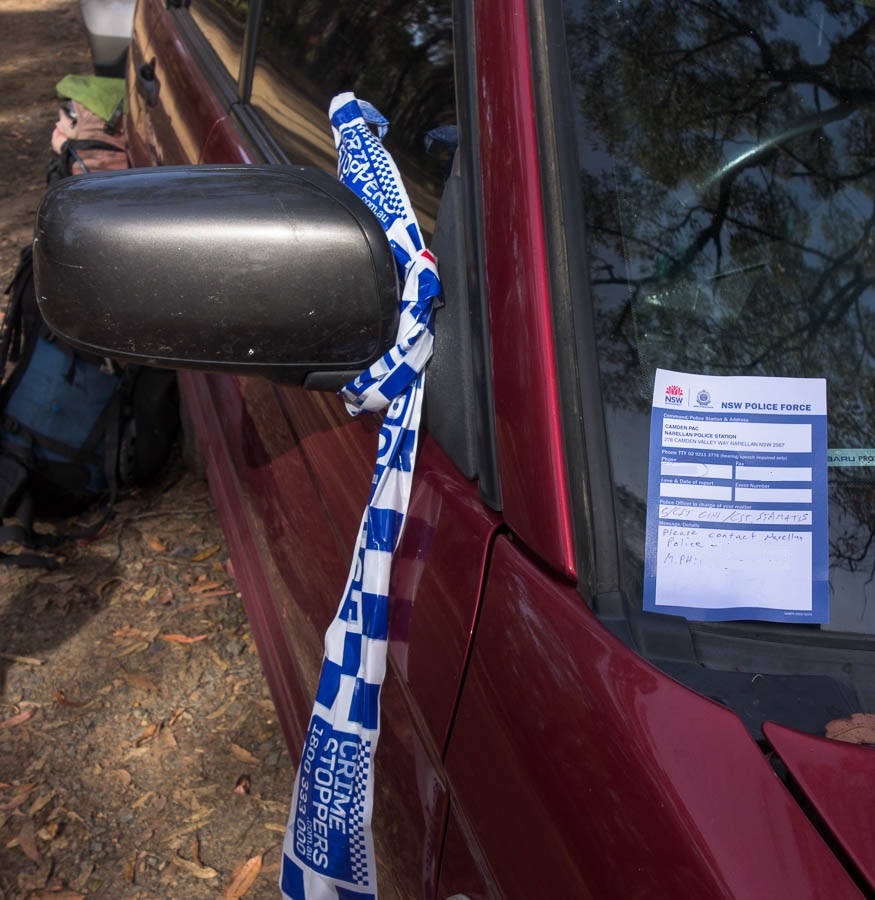 Or maybe there is something complicated left to the trip!?

Back at the car before lunch I was surprised to find police tape around the side mirror, and a note to call the police. I quickly gave them a call and assured them we were fine. We think a concerned resident next to the road where we left the car had contacted the police when it had been there for a couple of days. We spoke to one of the residents who popped over when we were getting changed after the trip – she thought it was probably her neighbour who had contacted the police. Unfortunately cross-checking the National Parks trip intentions database doesn’t seem to be part of the procedure otherwise they would have found our 4-day trip plan, and our car exactly where the trip described it would be. Instead we discovered the police had been door-knocking at our place, our neighbour’s place and Tom’s Dad’s place! Fortunately Tom’s Dad managed to quash any need for a search (though at times during this trip a helo rescue would have been welcome!).