Warring thoughts led into this weekend. I was tired and had lots to do – if it was a normal weekend there would be no question I’d be staying at home. But it was a long weekend – you can’t stay home on a long weekend! Initial discussions were for a 4 day trip, or a 3 day trip (Fri-Sun) to miss the traffic. But with the wet weather hanging around in some areas until Friday we ended up making Friday a life admin day. I was much more comfortable with going away by Friday afternoon having put a serious dent in my to do list during the day.

We still didn’t have an actual plan for the weekend though!

Friday evening is a good time to come up with a plan for a three day trip, leaving the next morning, right? Tom ran me through his idea – it sounded good. Might be a bit of a bludge trip he says. No worries.

The plan was predicated on us getting the car along a fire trail we’d never driven. If that failed, Plan B was nearby – but involved swimming the Colo. I was pretty happy when the fire trail did not provide any real obstacles!

So with a little bit of a navigational challenge to start – working out exactly where we’d parked the car – we set off down our ridge. It was reminiscent of another trip in the same area – pleasant enough day, if you could ignore the cold wind. There’d been rain in the preceding days – both of us nervous after having incidents with large chunks of sandstone breaking off with little force applied. 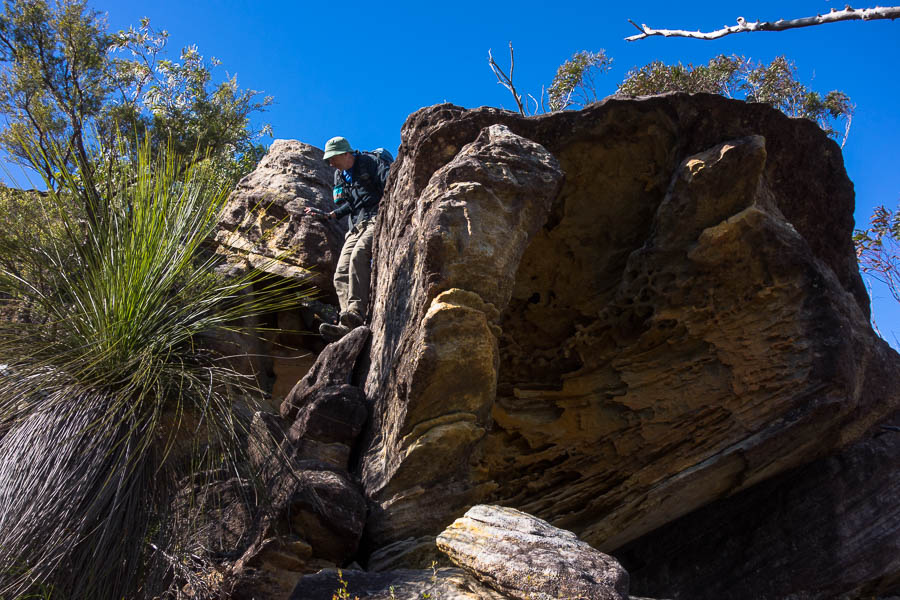 On the way down I quizzed Tom about the various passes in the plan. “They should all be straight-forward.. for Colo passes”. “Do you have a tape?” “Yes, but I’m not expecting to use it on the main route”.

We made it into the creek we were aiming for. “Does this creek have a name?” “Creeky Creek” “Uh, thanks”. 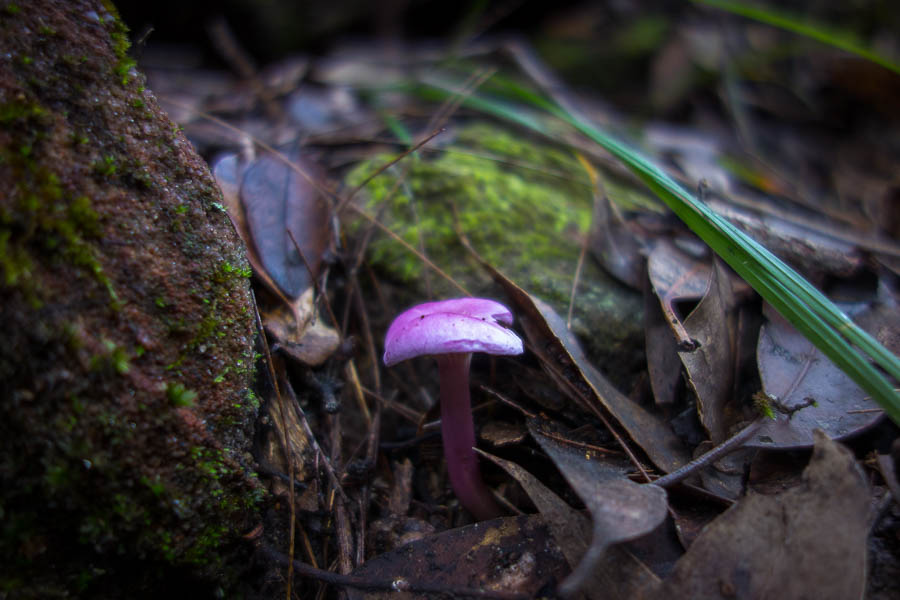 The creek was fun, as we scrambled our way through a series of tiered cascades. I had more fun than Tom as I was wearing my canyoning shoes which seemed to be handling the slightly damp rocks better than his bushwalking shoes. 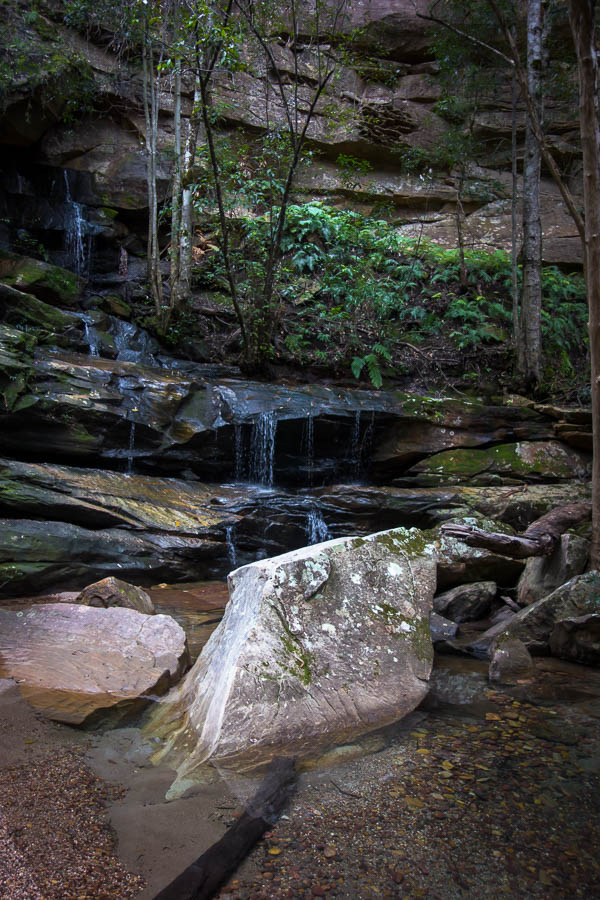 First waterfall in our creek

The last waterfall involved some slightly sketchy scrambling on my part – prompting Tom to find an alternative route, but we eventually both made it to the bottom without incident. 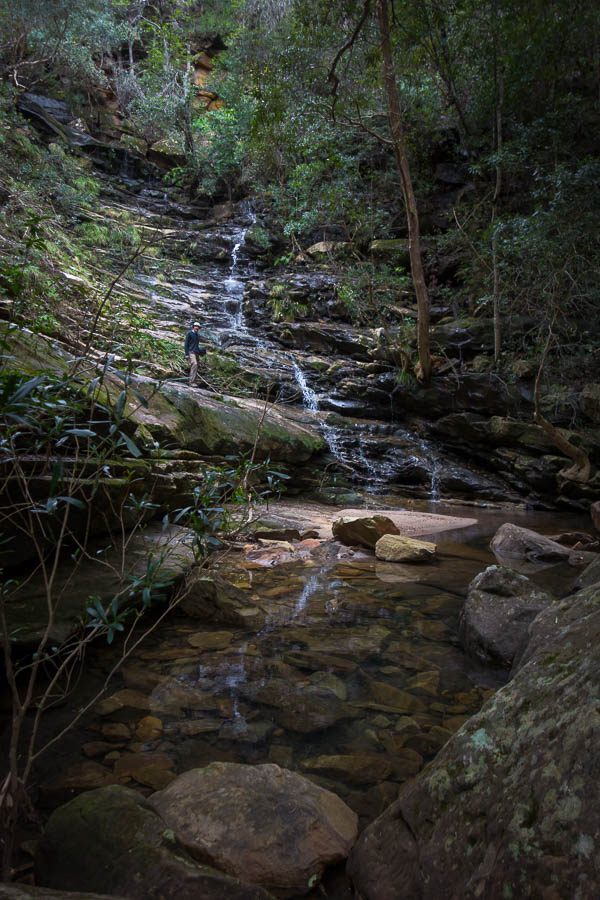 Last waterfall in our creek

From there it was a relatively straightforward descent to the junction with the Colo. We could have headed up onto The Island ascent ridge much earlier, but then we wouldn’t have completed Pass 29a. And how can you do a 3-day Colo trip without actually getting to the Colo? 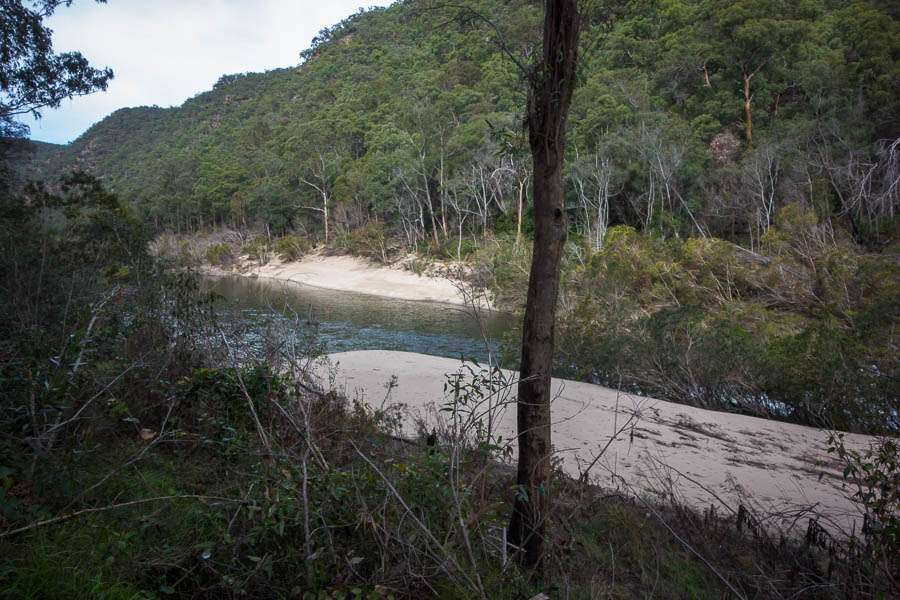 Just to prove we did make it to the Colo during the weekend!

After lunch, loaded up with water to take us through to tomorrow lunch time, we took Pass 28 up to the Island. The initial ascent was fairly continuous scrambling – nothing difficult, but lots of use of hands. We stopped for a breather at a nice lookout part way up. 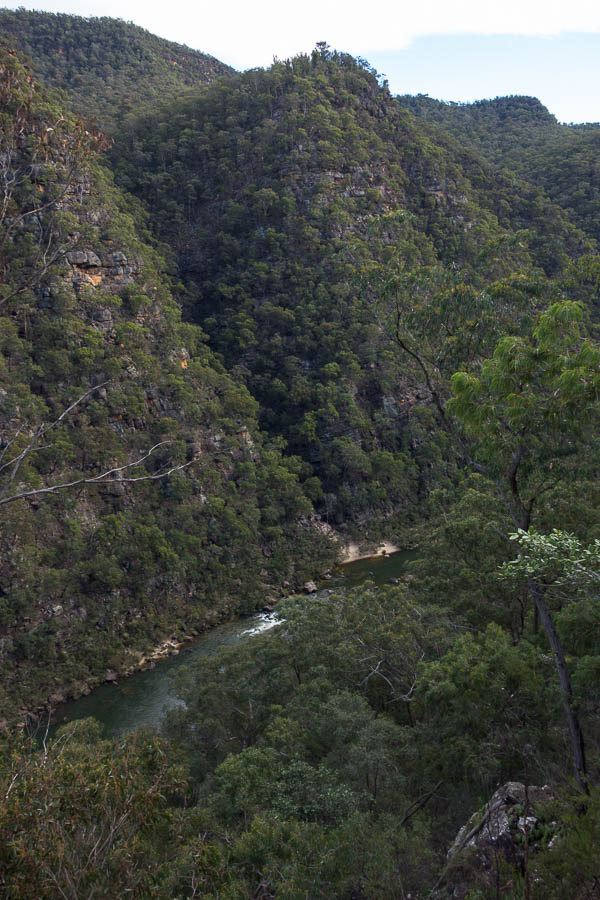 Views of the Colo from part-way to The Island 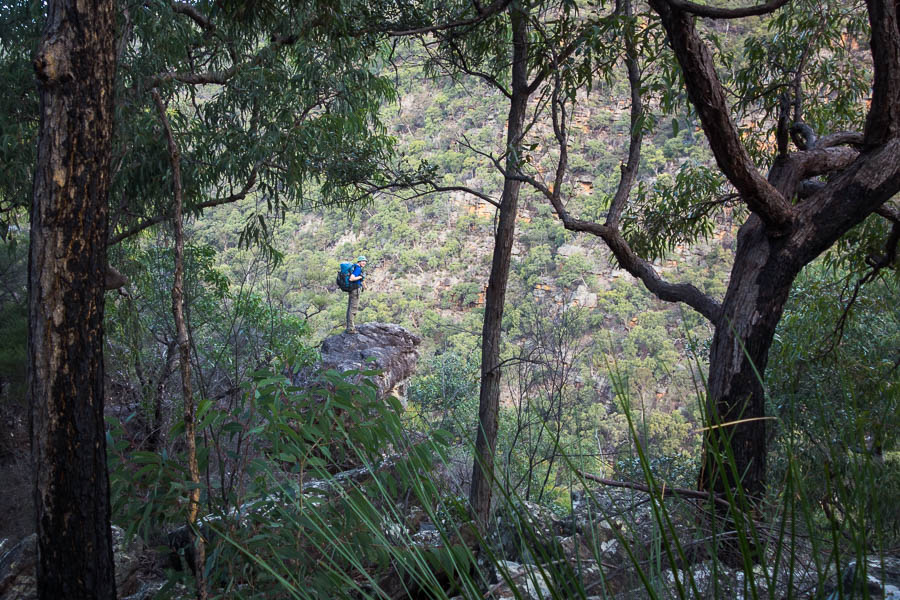 Tom looking at views (will become a theme)

The Island summit views were pretty good. And there were some spots where we could have scraped together an acceptable campsite. 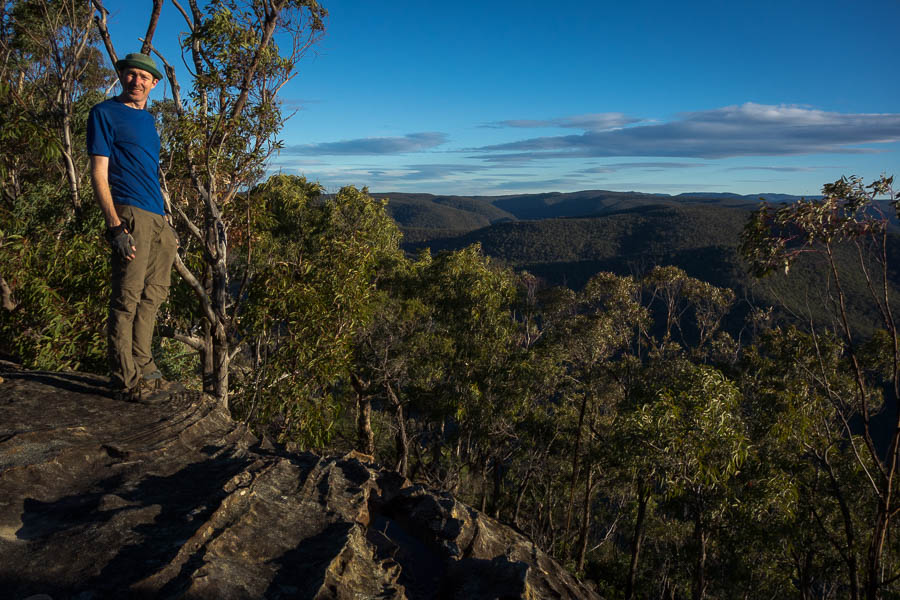 Tom at The Island summit

Tom was keen to see if we could find a better cliff-edge/camping combo for his photography so we headed down the north-west ridge. And what do you know? A nice cliff edge next to a relatively flat spot. So then we had to climb back up to the summit to retrieve our packs. So how’s that bludge trip going? 400m descent, 0.5km of slippery creek to negotiate, a 500m ascent, plus that extra descent/ascent/descent at the end of the day – yep, sounds like an easy day 🙂 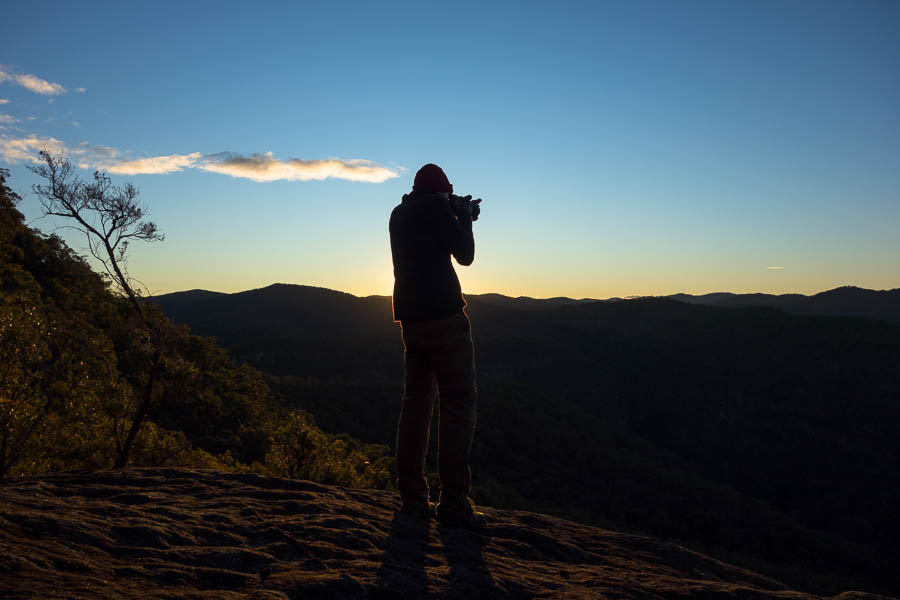 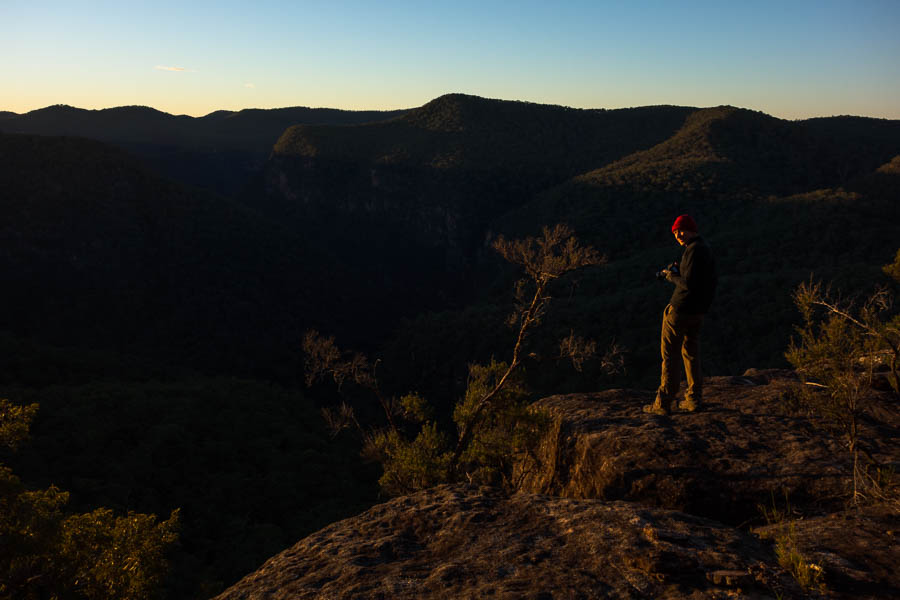 Tom taking a short break from photographing to pose

Of course, since Tom had carried in 3kg of camera gear, he was out of bed early to photograph sunrise. Not that getting up for sunrise in winter is particularly taxing. 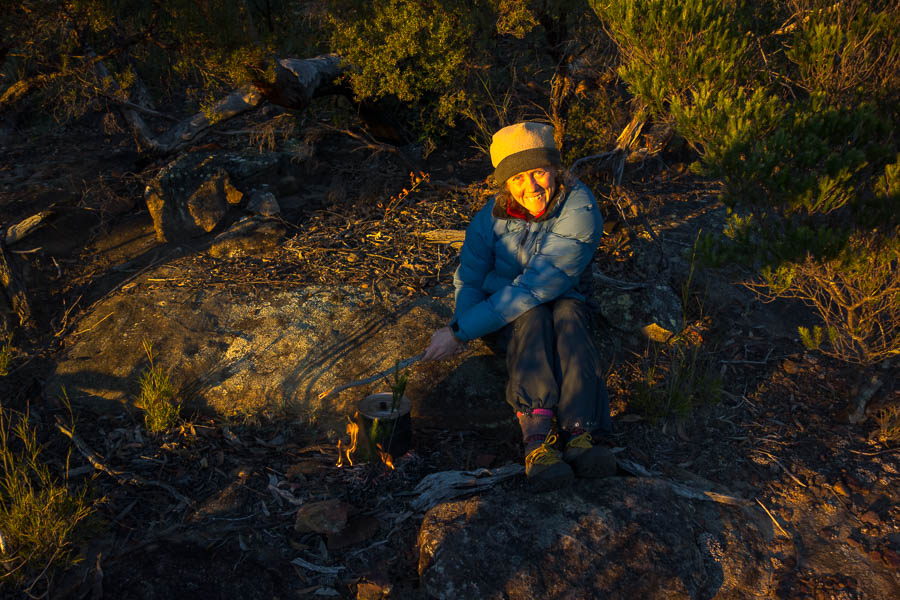 Small fire for our morning coffee at sunrise

After breakfast we headed up to The Island summit again and this time dropped off to the north-east ridge. 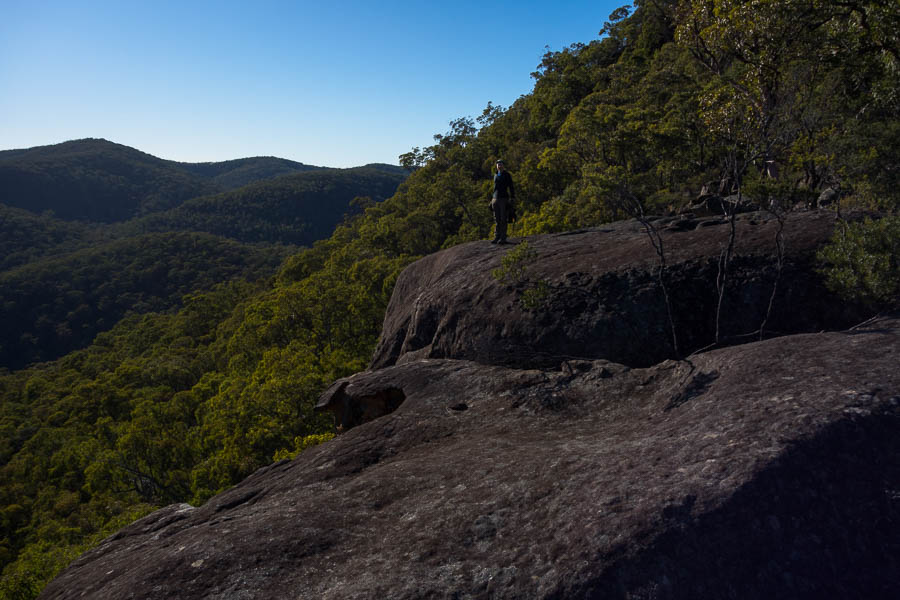 Tom on an impressive rock platform

Tom had initially thought we might have camped at the end last night – I was glad we were just doing it with day packs. While we did find a couple of vantage points for views to the Colo there wasn’t anything spectacular for the serious landscape photographer. 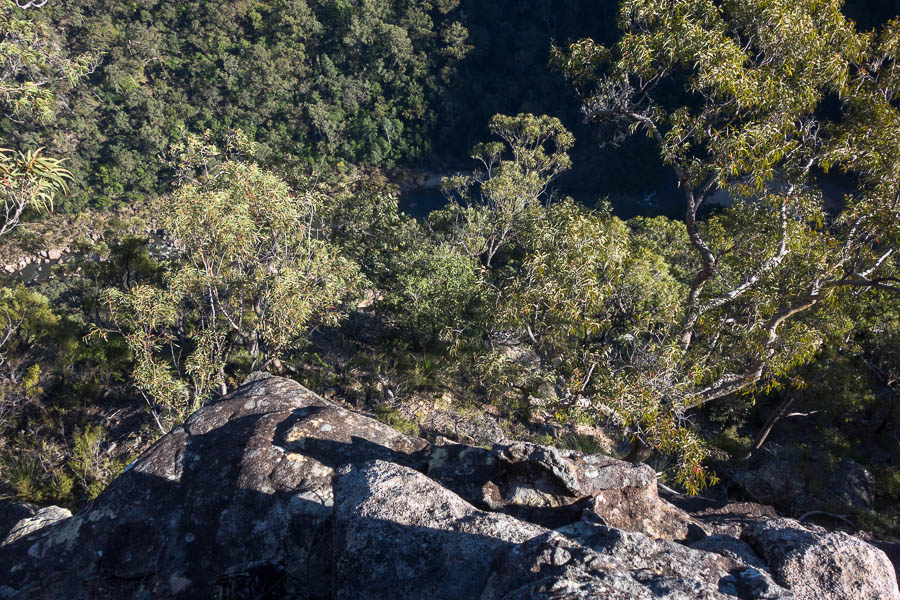 Looking down to the Colo!

Back at our packs for morning tea we continued north. The ridge quickly narrowed in a fairly dramatic fashion. There was a somewhat pathetic cairn on the ridge. It was unclear what it was trying to indicate – that you’d made it onto the ridge? that you should drop off on the right as it was slightly to that side?

The right looked unlikely so we tried the left. It was difficult to work out how many levels we needed to get down. We made it down a couple of levels, I thought that was the tricky stuff worked through. But then I got to the top of another drop which I couldn’t see an easy way off. 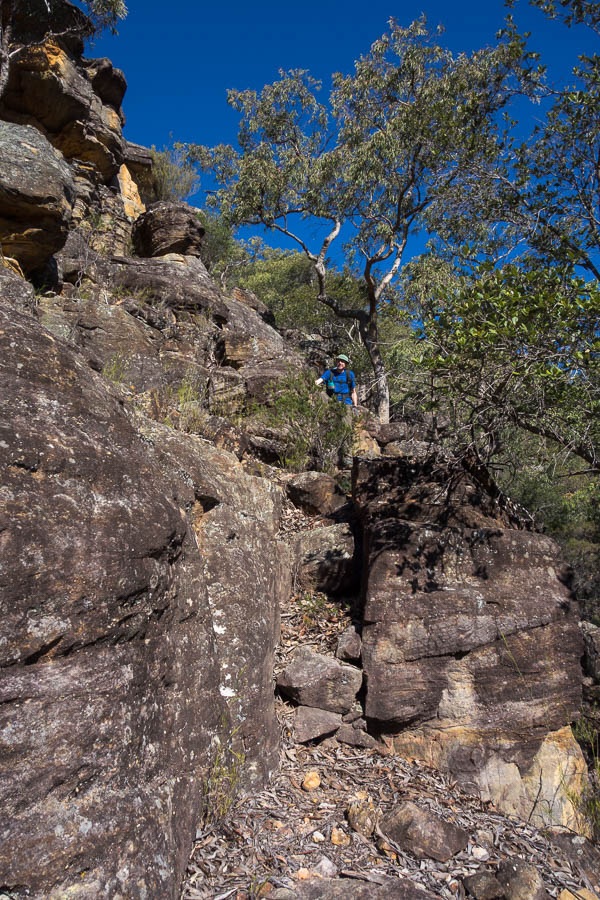 Tom having got through the first couple of cliff lines

It was only a 2m drop that was stymieing us – but 2m is enough. So even with Tom’s fancy DEM generated 5m contour map it doesn’t tell you all the answers. After a fair bit of hunting around I managed to find a way down and around. From there the ridge was lovely walking, and in the second saddle we dropped packs. We needed to pick up water and since Clews Cave was in the vicinity it seemed wrong not to visit it. 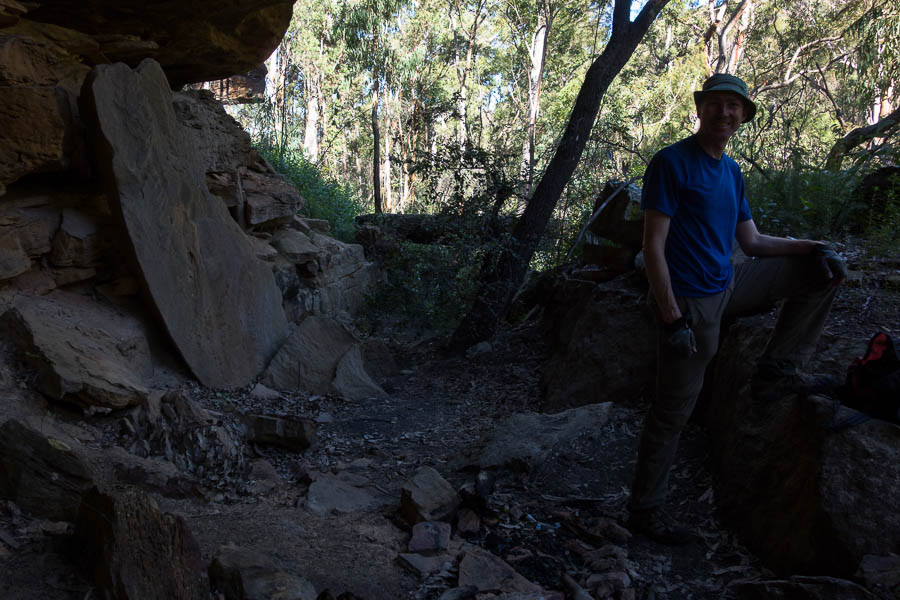 Tom had been to Clews Cave previously and told me not to expect too much. I asked if there were any historical artefacts. He didn’t think so, but that there might be a log book. Sadly the wine bottle shards in the fire place were not artefacts dating back to Major Clews – I don’t think Saltram wine existed in the 1930s. I didn’t have anything to carry out broken glass in so unfortunately they are still there. But seriously, if you can carry in a bottle of wine, carry the empty out with you! We couldn’t find any logbook, so Tom may have just made that up.

Having loaded up with water for the rest of the trip we headed part way up the next ridge before we had lunch with filtered views. 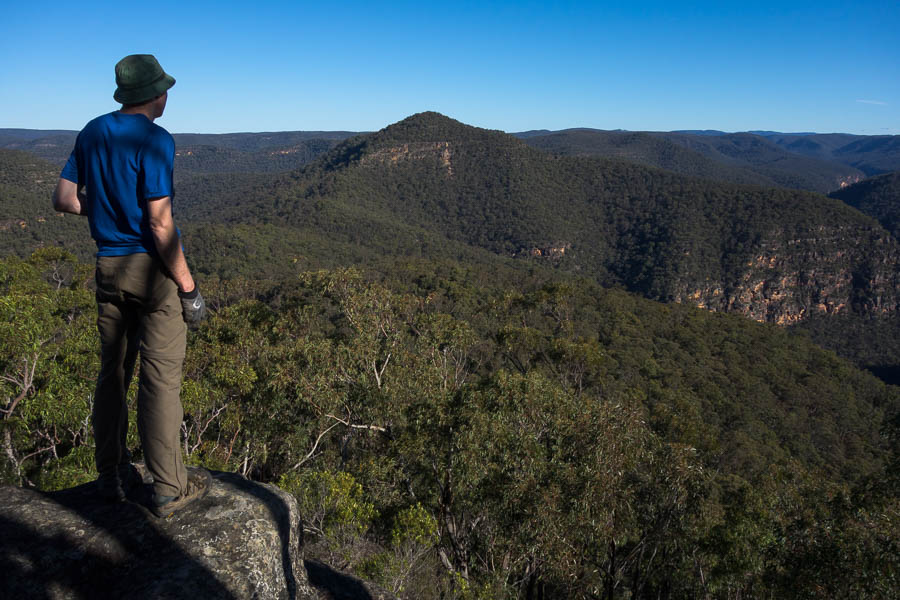 Great views of The Island

Tom had the good grace to have a sandstone block break under him at a spot with excellent views. Perhaps it was just a ploy to ensure we got a long break to take them all in? Having some time to recover from his fall, and decide he probably just had a very bruised bottom, and some flesh wounds we continued. I figured the measure of how much he’d actually hurt himself would be how far he was willingly to go for views/find a campsite that night.

We found a lovely camping section, next to a rock platform with ok views part way along the ridge to Parr West. But Tom wasn’t having a bar of it – the goal was to get to Parr West so we pushed on. Sympathy for his injuries immediately turned down.

Once on the Parr West summit we found a flat camping spot, and a nice protruding boulder for views. Sold!

There at 3pm (ok, maybe the bludge factor is coming to the fore now), meant we could have an afternoon cuppa. Then torn between the two lookouts we found, we decided to have two happy hours – one at each. Sunset was speccy. 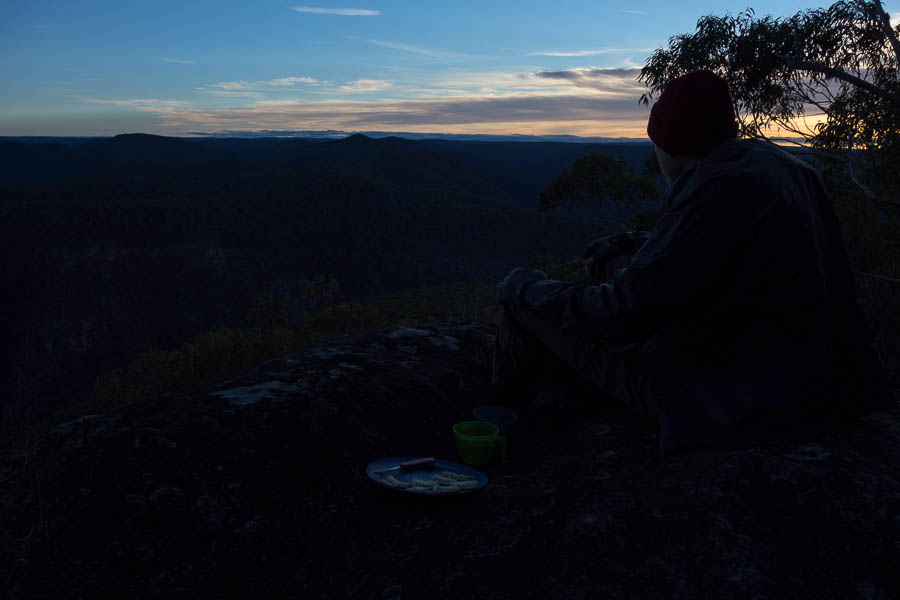 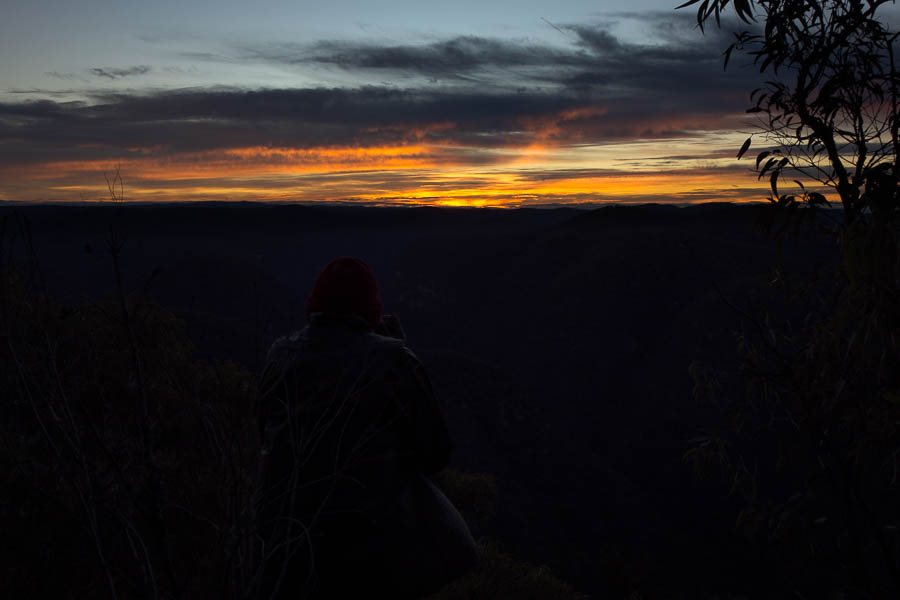 That night, we concluded that dehydrated bolognaise and pasta, with fresh zucchini was a very poor choice for a high camp. Dinner was a complicated affair, juggling limited amounts of water (yes, starchy pasta water can go back into rehydrating bolognaise), limited cooking receptacles and limited containers full stop. Once it was all cooked it was delicious – and hey, what else would we be doing with our evening.

Similar to happy hour, the next morning we had our hot drinks at one lookout, and progressed to breakfast at the other. It’s a tough life. 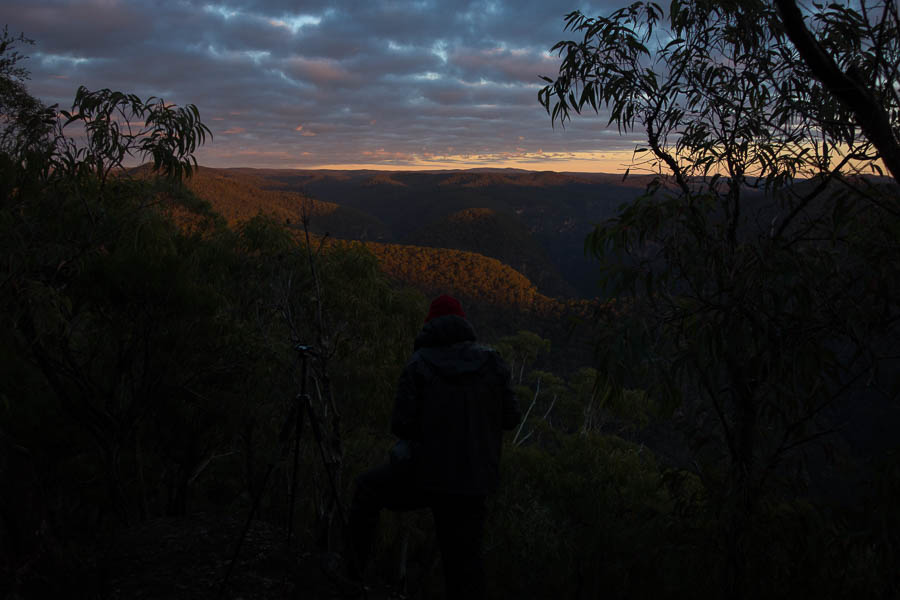 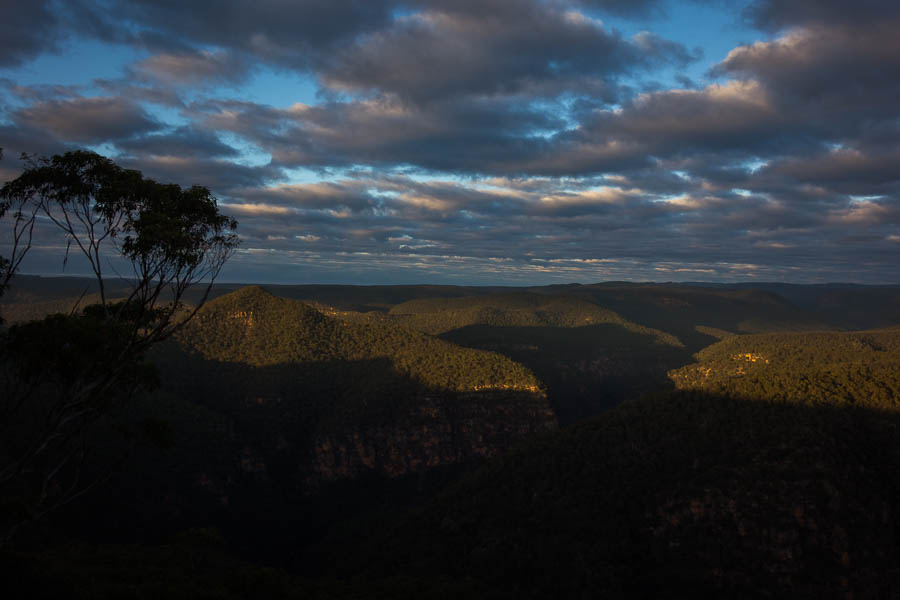 Post breakfast we headed west off Parr West with day packs to look for cliff edge views. There wasn’t much in the way of clear views, but you never know till you go. Back at camp, we just had a series of twisting ridges to navigate back to the car. Third day – definitely a bludge day. We ate lunch at morning tea so that we didn’t go home with the remains of a manky avocado. 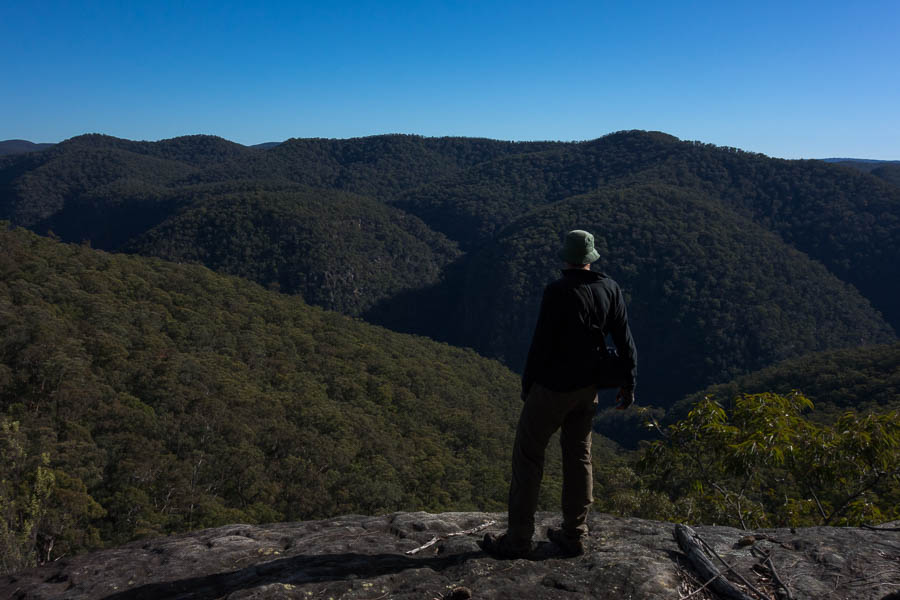 Tom on yet another cliff looking at yet more views

Afternoon tea in Windsor on a sunny winter public holiday was a bit crazy.

However, we finished the day feeling immensely smug at our choice of location. The traffic news had every arterial road into Sydney with traffic issues (including a horse prancing on the road in Canterbury causing havoc!?), and we just cruised home with no issues. A wonderful, if slightly bludgey, weekend in the bush.