The forecast on Saturday was for the “coldest day this year”. Snow was expected down to 800m. High winds to go with it. We had a look at the weather forecast – there seemed to be a relatively still, warm patch of weather inland from the central coast. I was plumping for walking in Brisbane Waters, but Tom was having none of it. How about a creek walk in the Colo with a cave to sleep in? He said rather off-handly, but with the tone that I knew meant “there’s no way I’m doing what you’re suggesting”.

So the Colo it was. We started off with a firetrail slog, punctuated by trail bikes, which we were both glad to get to the end of. From there we headed into the bush. Morning tea was on some rocky platforms overlooking the surrounding area – pleasant until the wind started blowing with a bit more ferocity. We were glad to drop down into the creek. 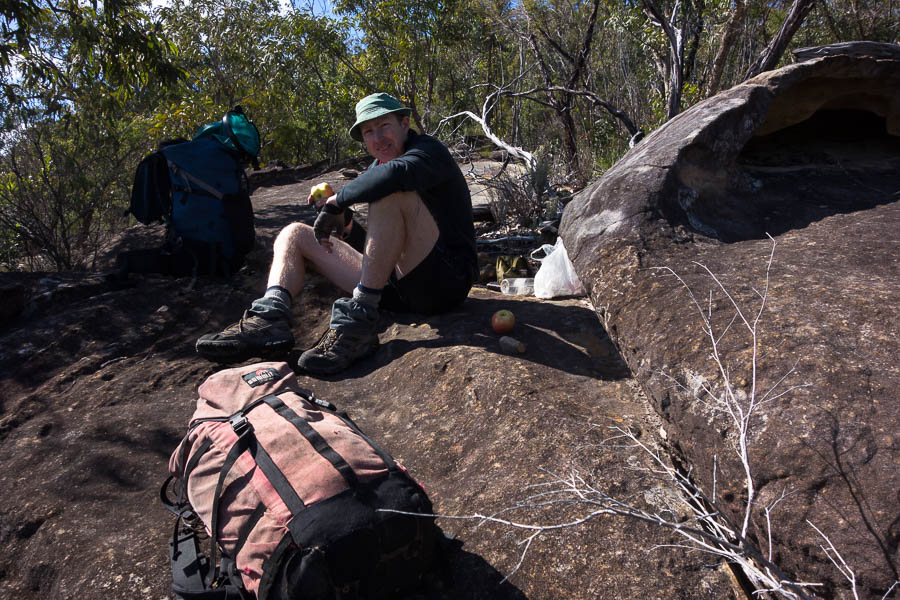 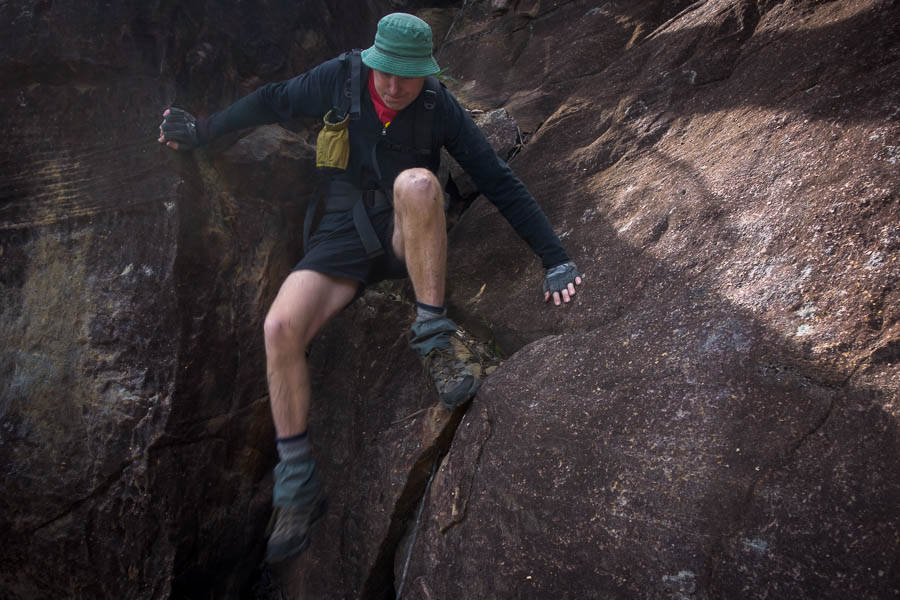 About 11:30am a very light rain squall came through, about the same time I spotted a overhang in the cliff line we were following. It didn’t take much convincing to have an early lunch, especially since the cave protected us from both the wind and the rain. That was the only rain we saw for the weekend and it was well gone by the time we set off again. 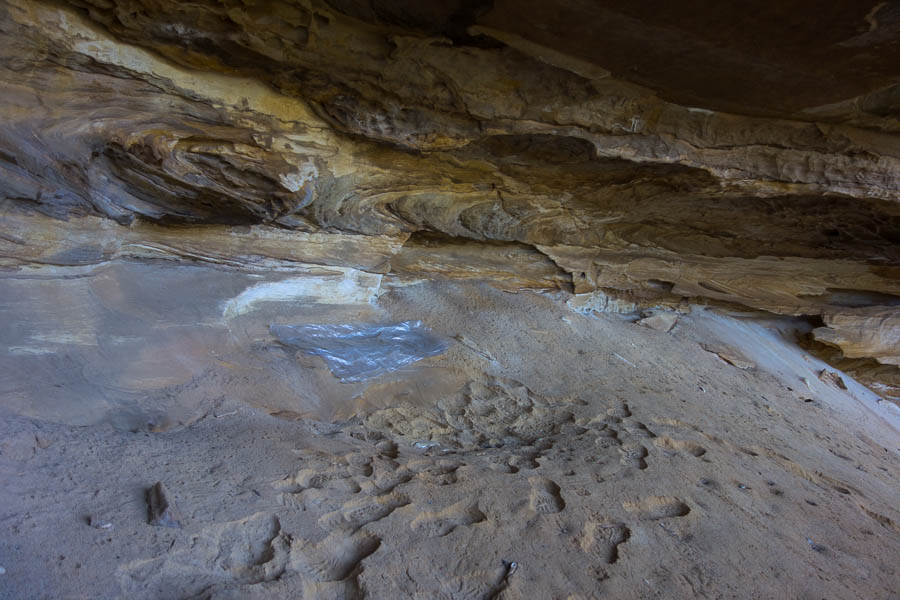 Lunch cave out of the rain and wind

There were some beautiful sections of creek, including this lovely spot with a natural arch and a waterfall. 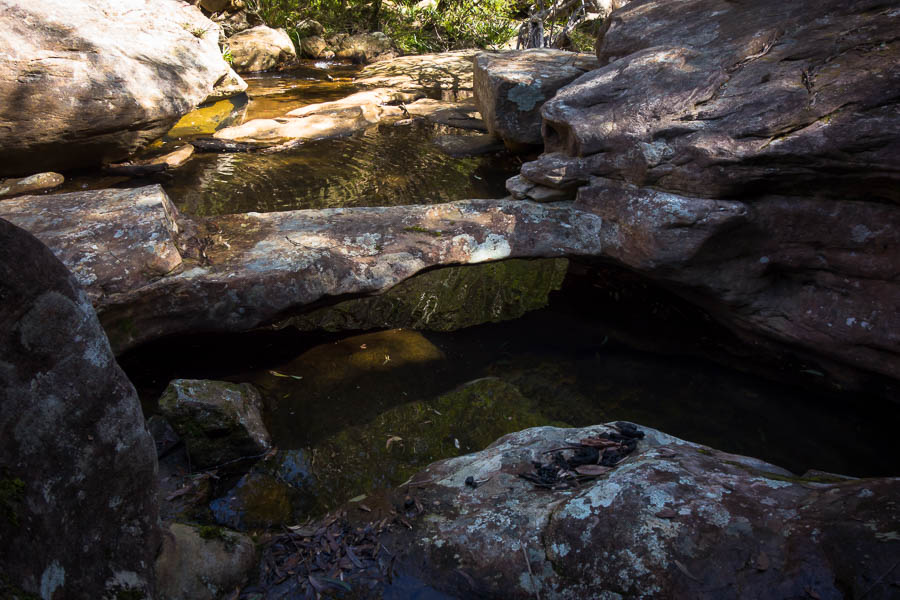 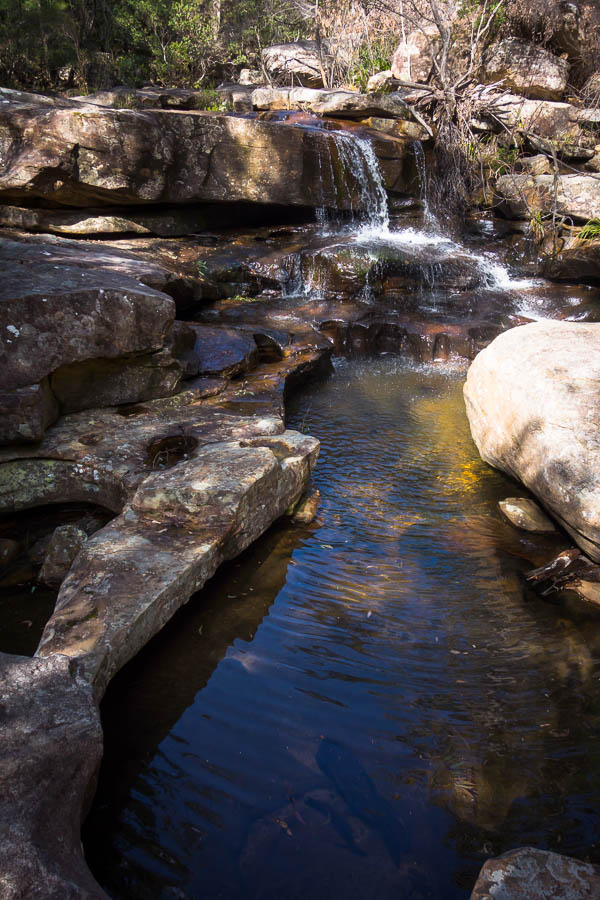 A bit after that Tom was sure we were near our camp cave for the night. He’s always keen to carry a bit of firewood when getting close to camp. I thought this bit was a bit excessive given we were boulder hopping and climbing through river gums… and the cave wasn’t anywhere as close as he thought. He did eventually abandon it a few hundred metres later. 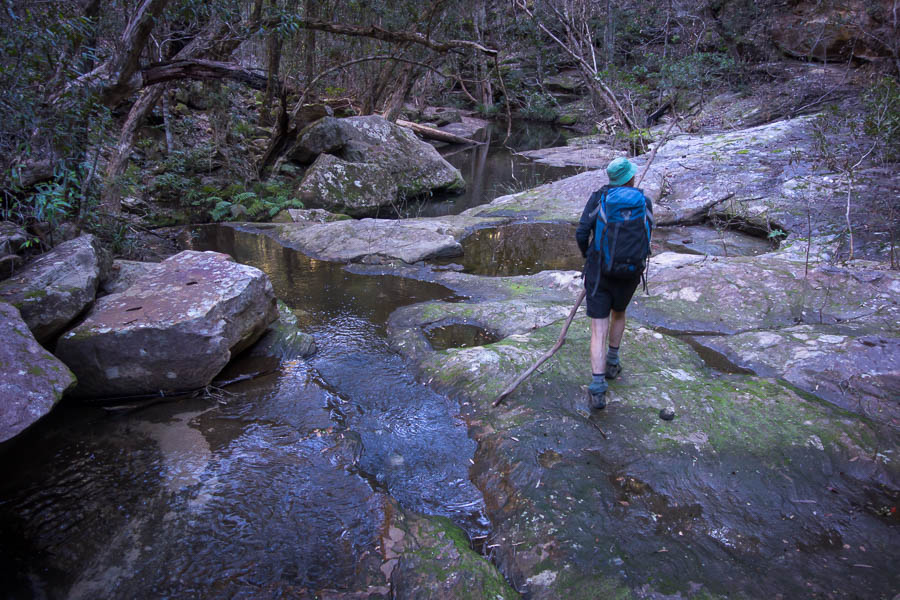 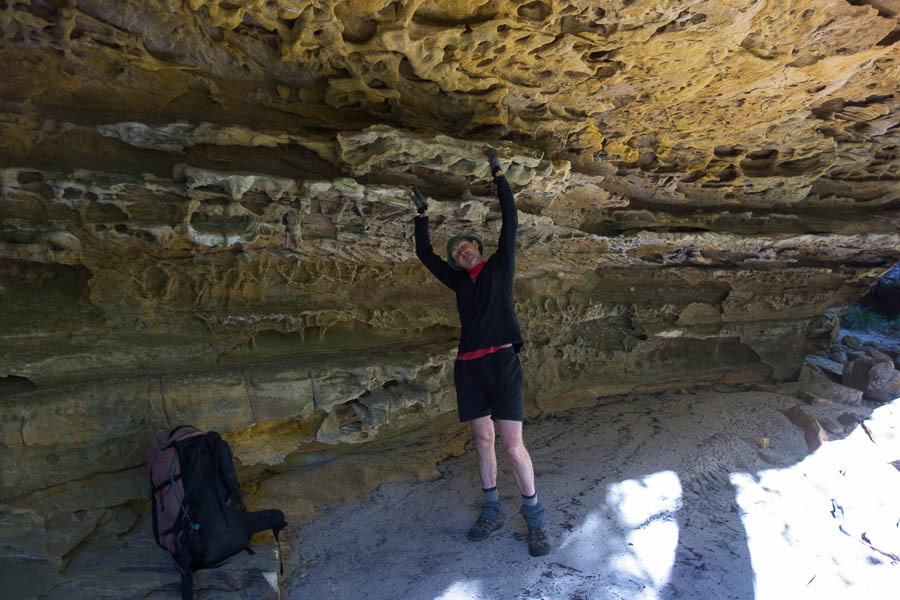 I’m not sure what is going on here

Since it was only mid-afternoon we had a cuppa and relaxed – a somewhat unusual occurrence compared to some of the more recent trips! 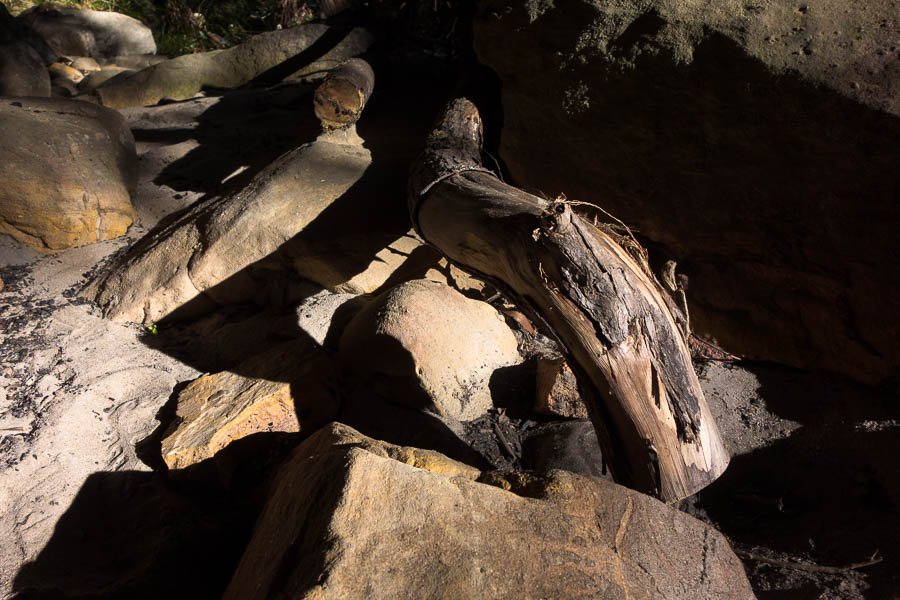 Someone with a saw has been here! 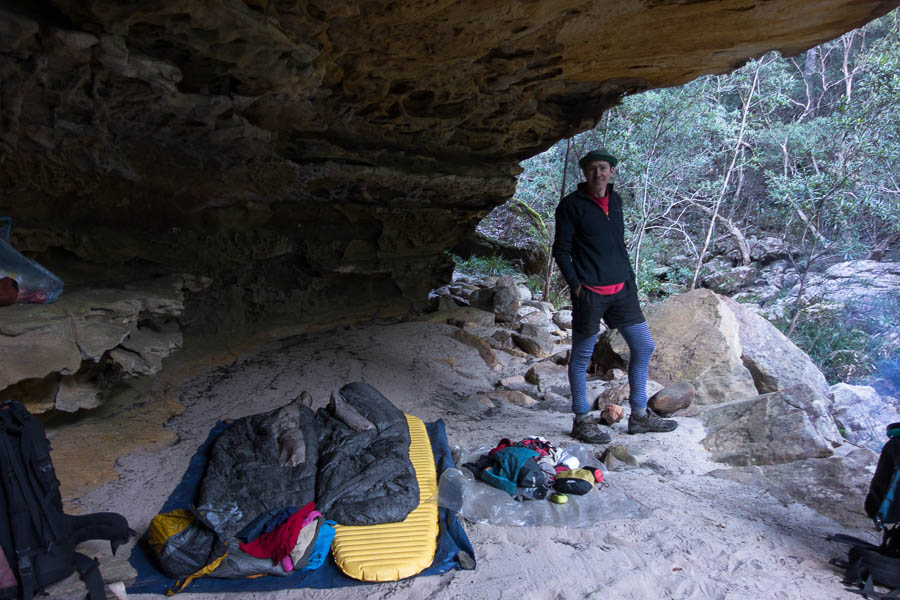 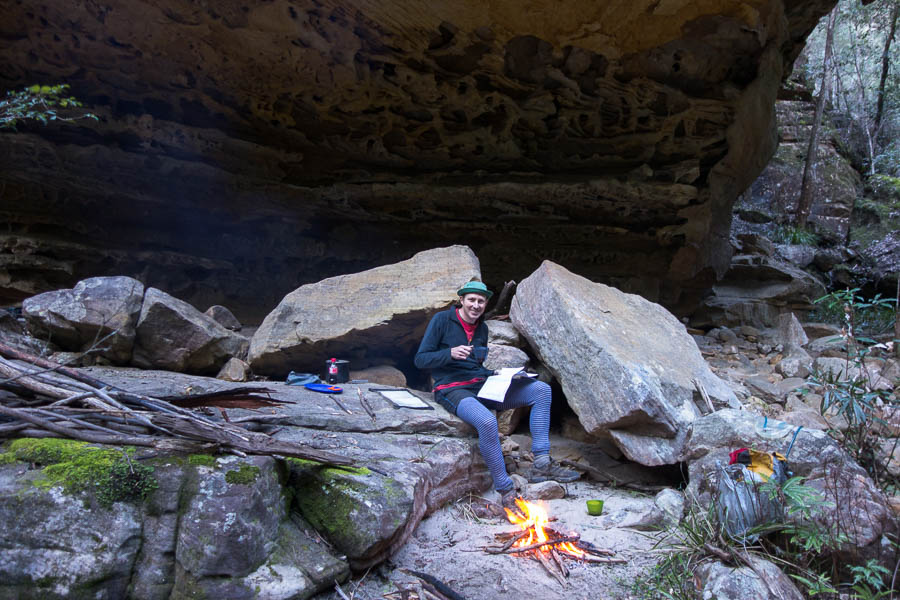 The next day we had quite an ambitious route – several kilometres of creek. I thought we would probably end up bailing onto the ridge but we walked it all! The creek changed nature a few times, starting with rock slabs and smaller boulders. Then there were some huge boulders and quite physical scrambling to get through them. Following that was a very flat, wide section which alternated between open banks and quick walking, and some slower stuff. Lastly more ferns and undulations as we crossed more small tributaries. 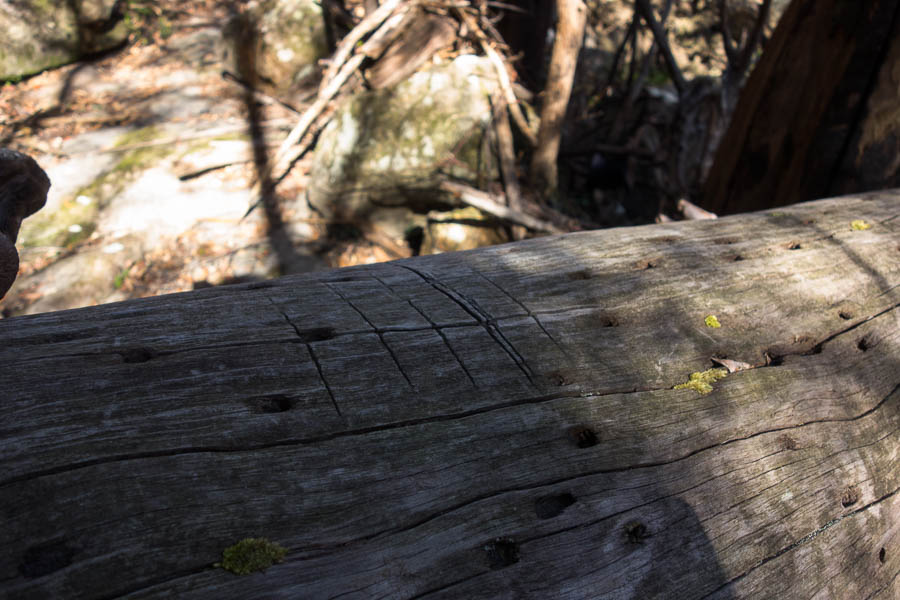 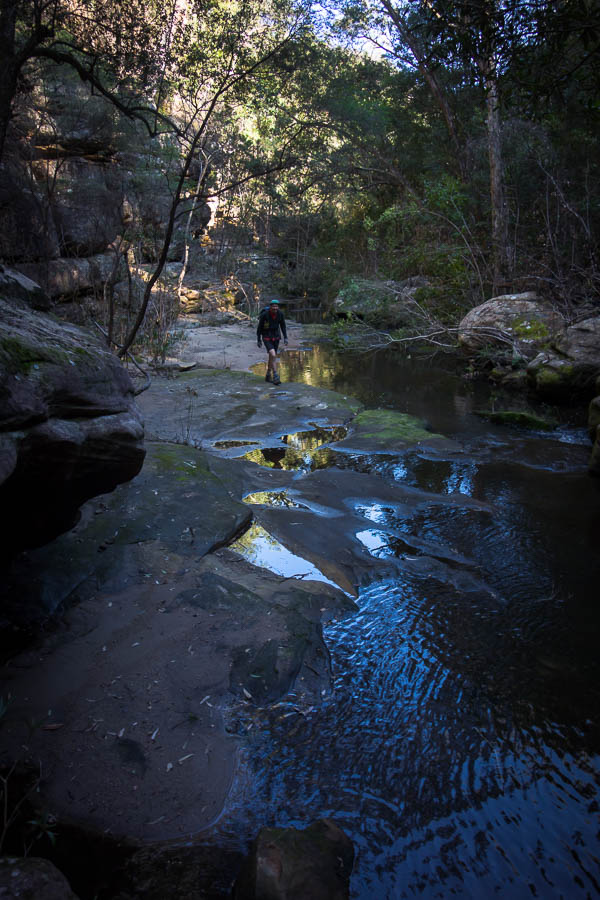 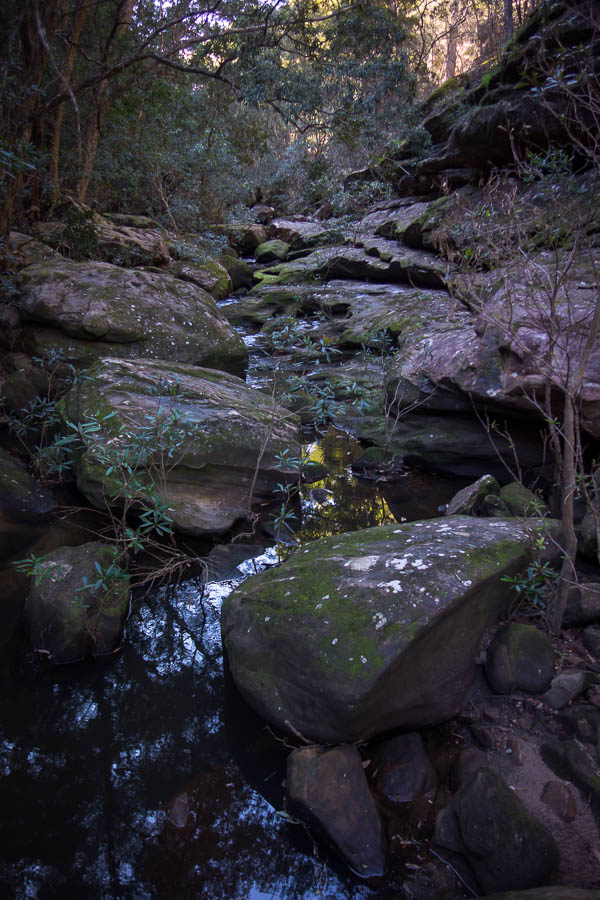 It was only afterwards Tom admitted he had some notes which said “the upper creek is hideously slow and you’ll never forgive yourself for the torture” and despite this had suggested walking the whole thing! To be fair for us it wasn’t particularly difficult going, the fire had been through (at fairly low intensity) and there weren’t any bad sections of scrub. That said, there were thousands of lawyer vines shoots coming up and I don’t think it will be too long before it becomes torturous again. 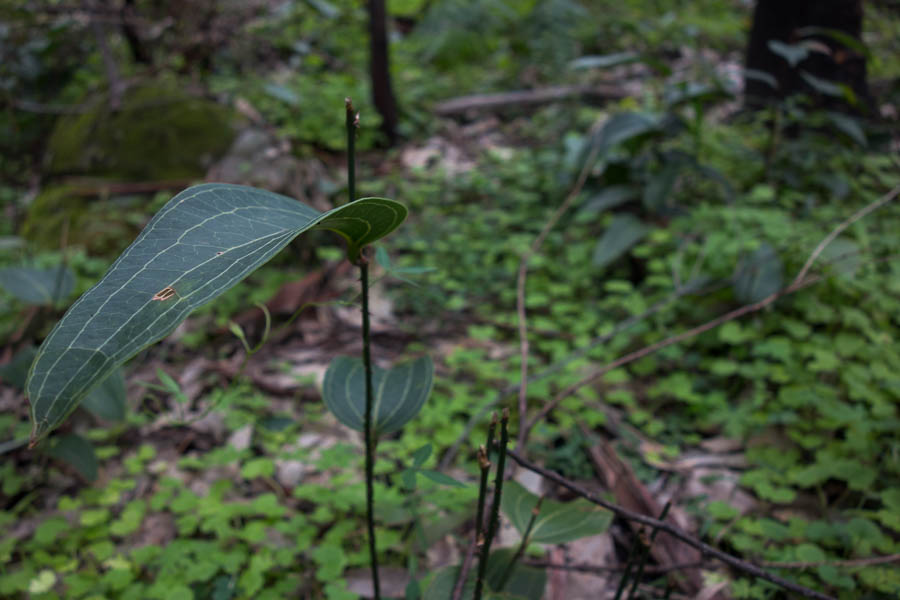