In 2018 when we were partially based in the upper mountains I spent quite a lot of time looking at blobs of green on the map. One of the blobs I found was Winburndale Nature Reserve. After putting an exploratory club trip on the program for Nov 2018 I discovered water was likely to be a problem – so I was not too unhappy when most of the sign-ups withdrew and I had to cancel the walk. Fast forward to 2020, bushfires decimated many areas but Winburndale escaped. It seemed the perfect opportunity to resurrect the walk, particularly since there has been decent rain. I rescheduled the trip for May 2020 – with a full contingent signed up – but then Covid-19 arrived.

Determined to get this bunny off my back I rescheduled for July 2020. At last we would see what Winburndale had to offer. Most of my May sign-ups were back, plus a couple from the original 2018 trip, so we had a full party scheduled to go. It was a pleasant drive through the mountains to Lithgow where most of us met up. We lost one to over-sleeping on Saturday morning, so we were down to 7. My well-planned meeting point was a fail since the cafe didn’t open until we were meant to be leaving, and the toilets were having maintenance done on them!

The forecast was for a cold front with possible snow flurries on Saturday morning. By the time we got to Yetholme the visibility was low, it was lightly sleeting and if I didn’t know it was forecast to clear I would have been wondering why on earth we were heading out. Picking up our 7th member from Yetholme we ventured into Sunny Corner State Forest – I was glad we had an AWD & 4WD as the precipitation meant the dirt roads had little traction. It was a magical drive out through the pine forests which had a light dusting of snow. Lauren must be the lucky (!?) charm as the last overnight walk Tom & I did with her it also snowed! 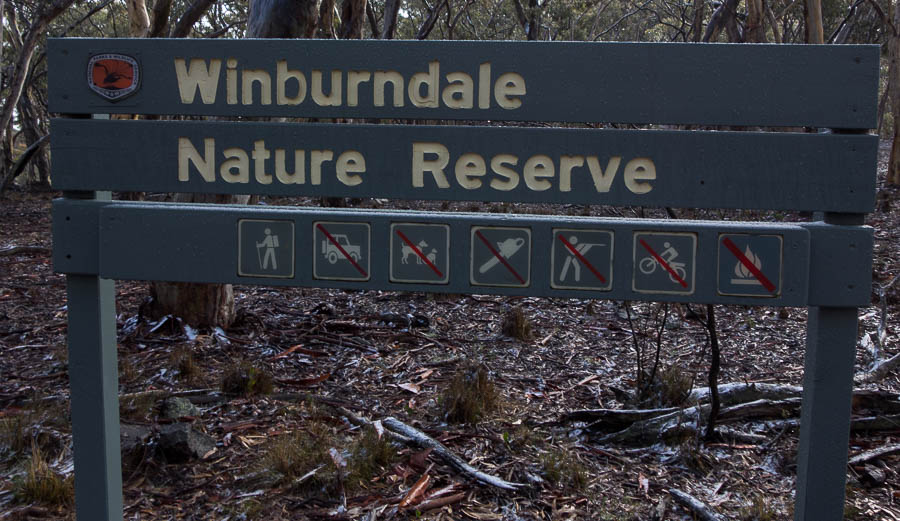 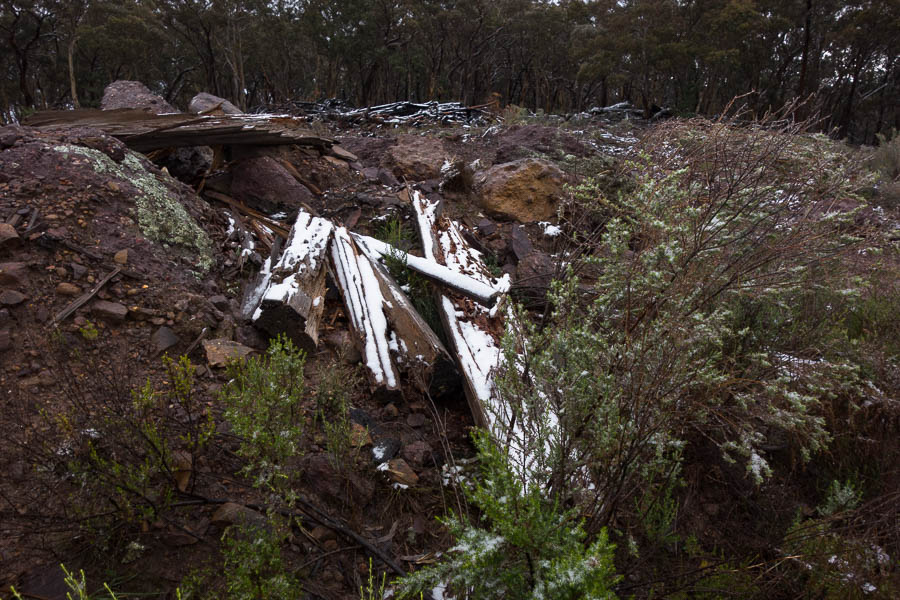 Wintry start to the day

By the time we started walking the weather has lifted. Lauren even optimistically applied sunscreen before we left the cars. Blue sky poked through and it was really quite a nice day if the wind wasn’t blowing. Eschewing the fire trail we followed the cliff line where we could – though the conglomerate rock proved rather slippery under foot. 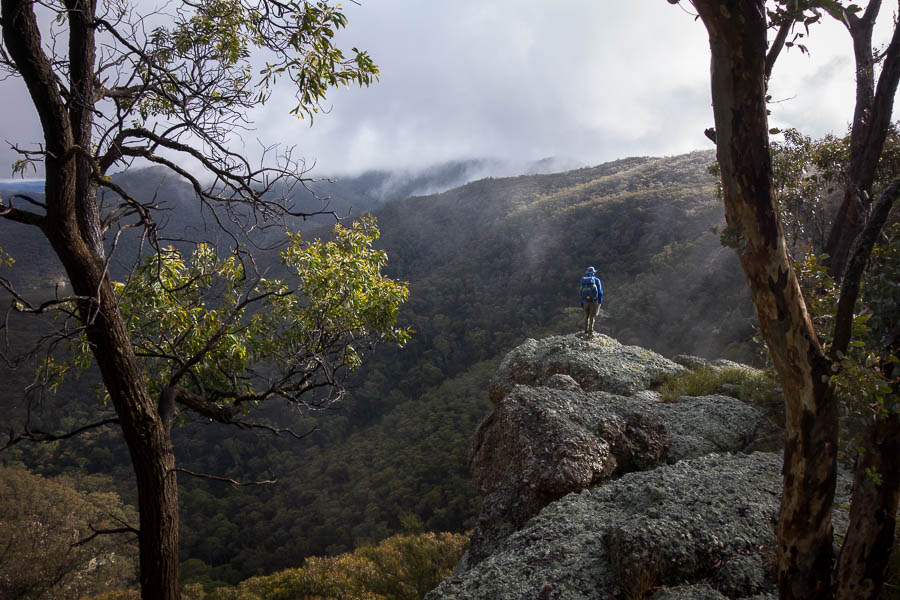 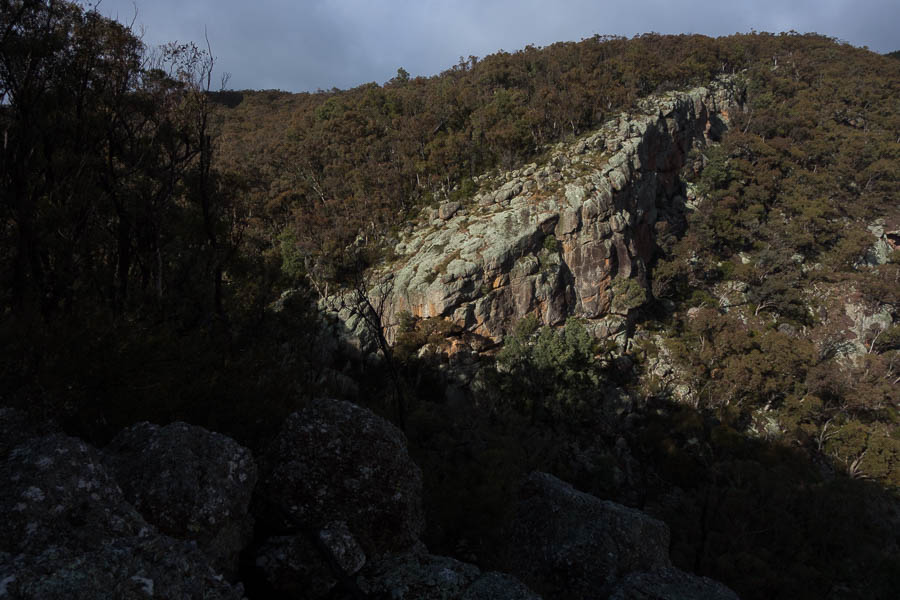 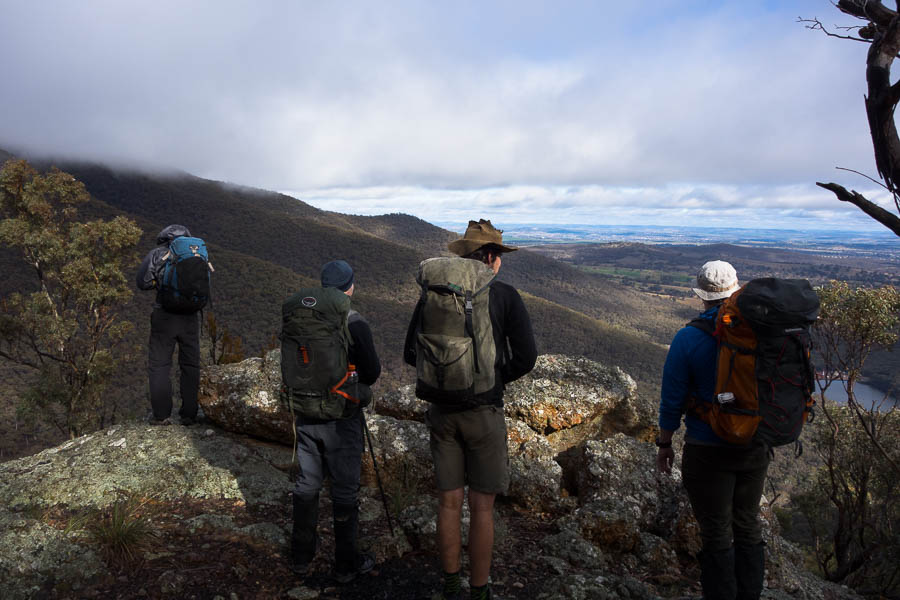 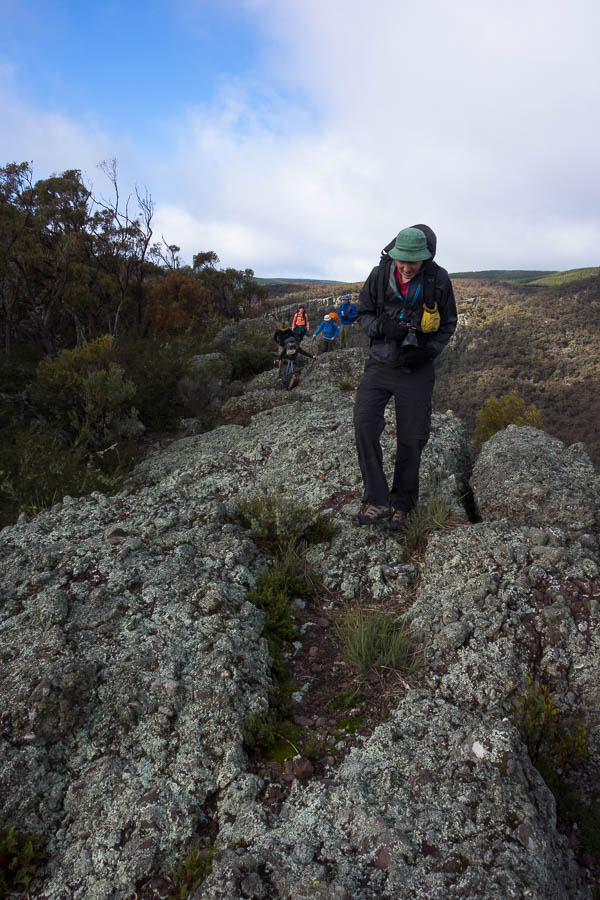 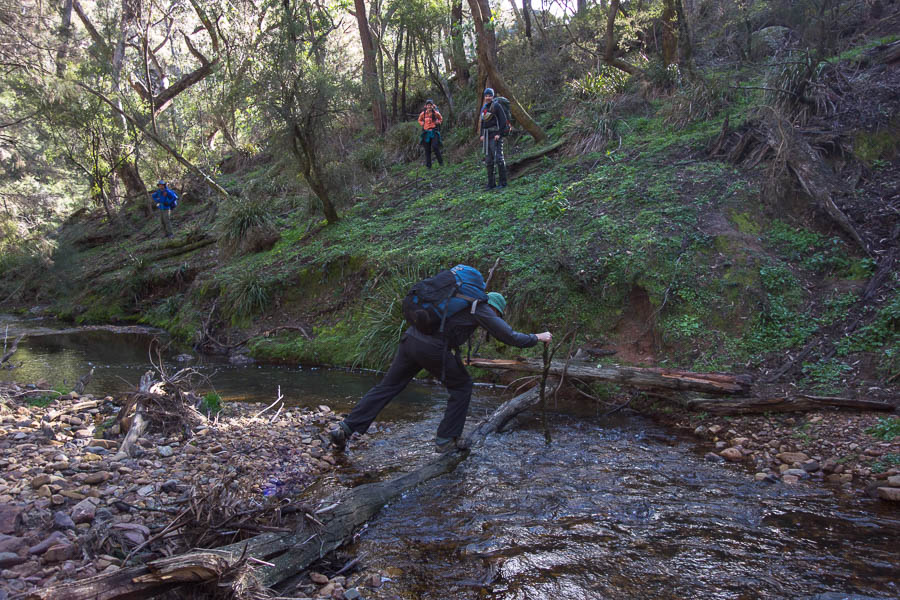 Crossing a creek (only one finger sacrificed in the process)

A solid 300m climb warmed us up prior to morning tea – I suspect the first decent ascent many of us had done in a while. We saw our first (but not last) goats of the trip not long after this. I am pleased to see the Reserve will be closed in a couple of months for pest control. 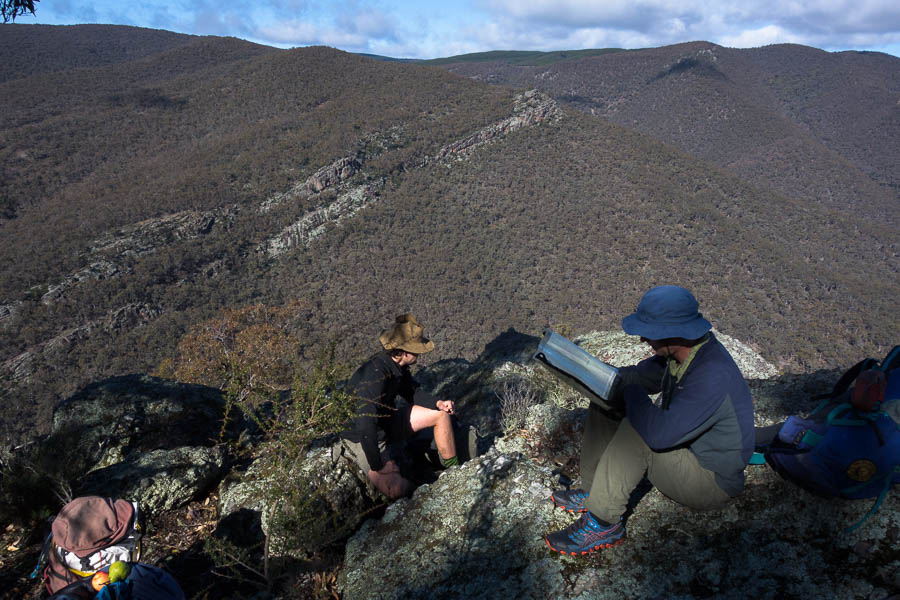 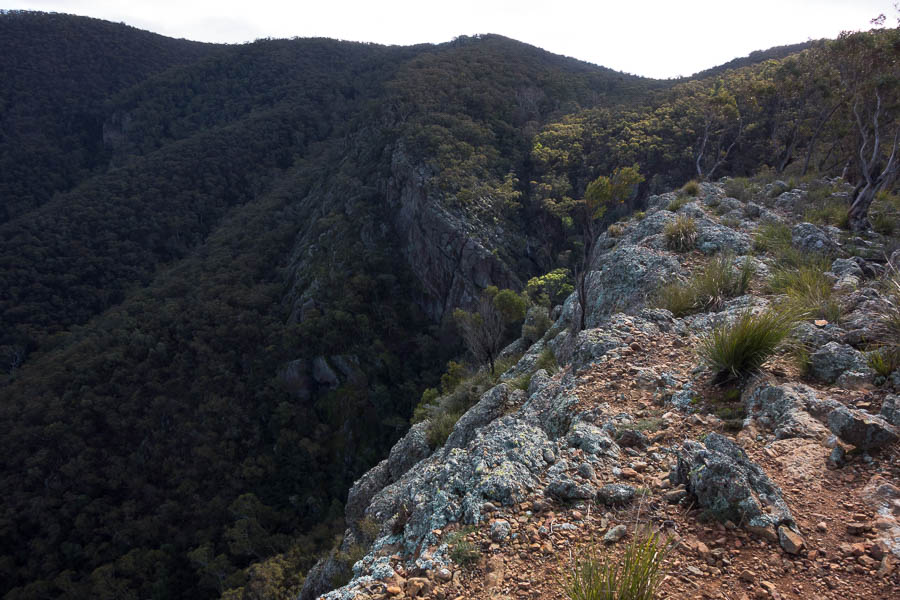 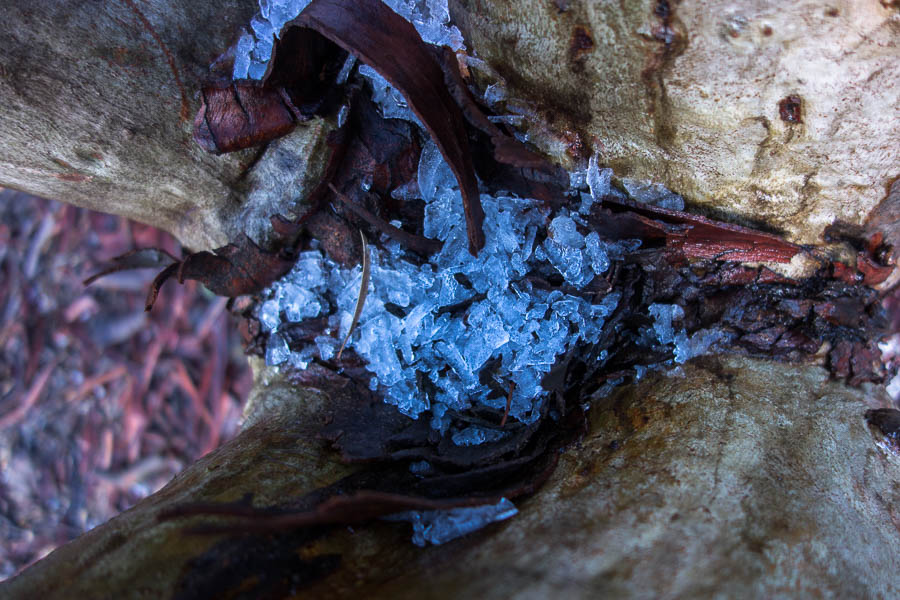 Remnants of the cold blast overnight 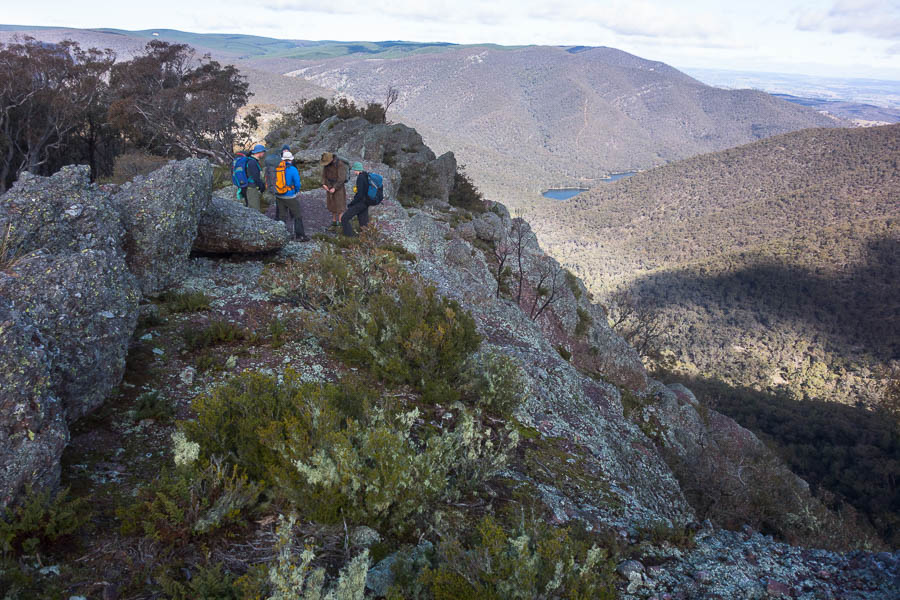 Looks like a serious discussion going on – without the leader!? 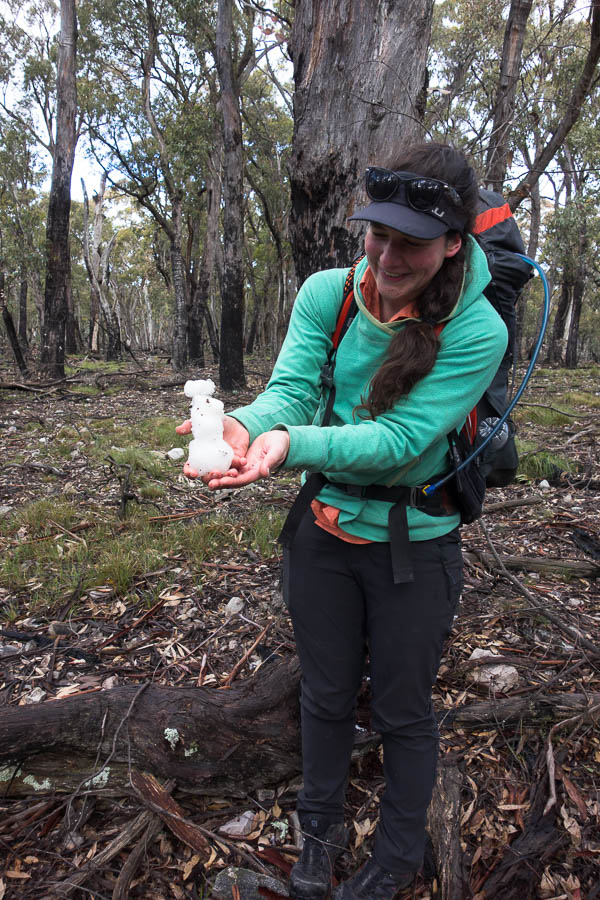 It’s not every trip you get to make a snowman 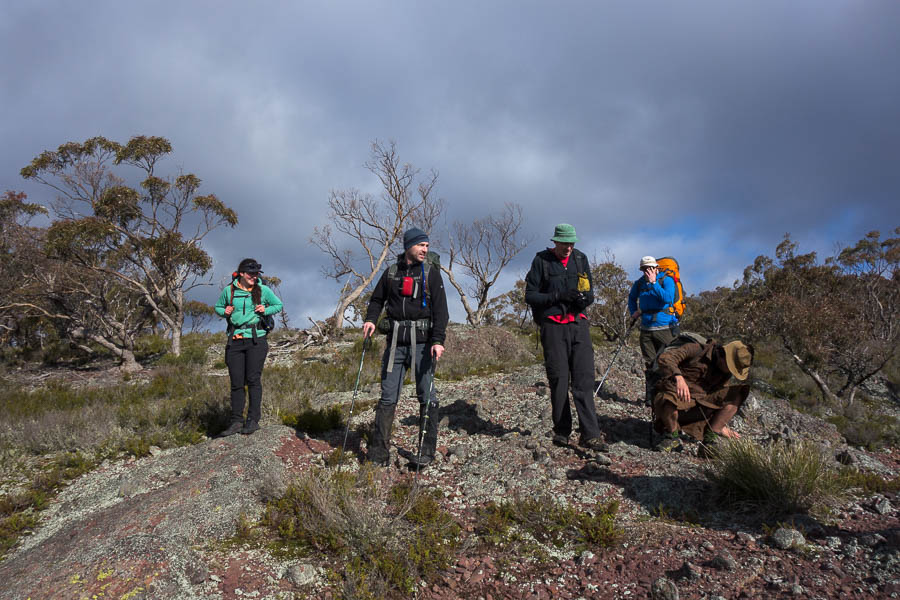 Most of the group 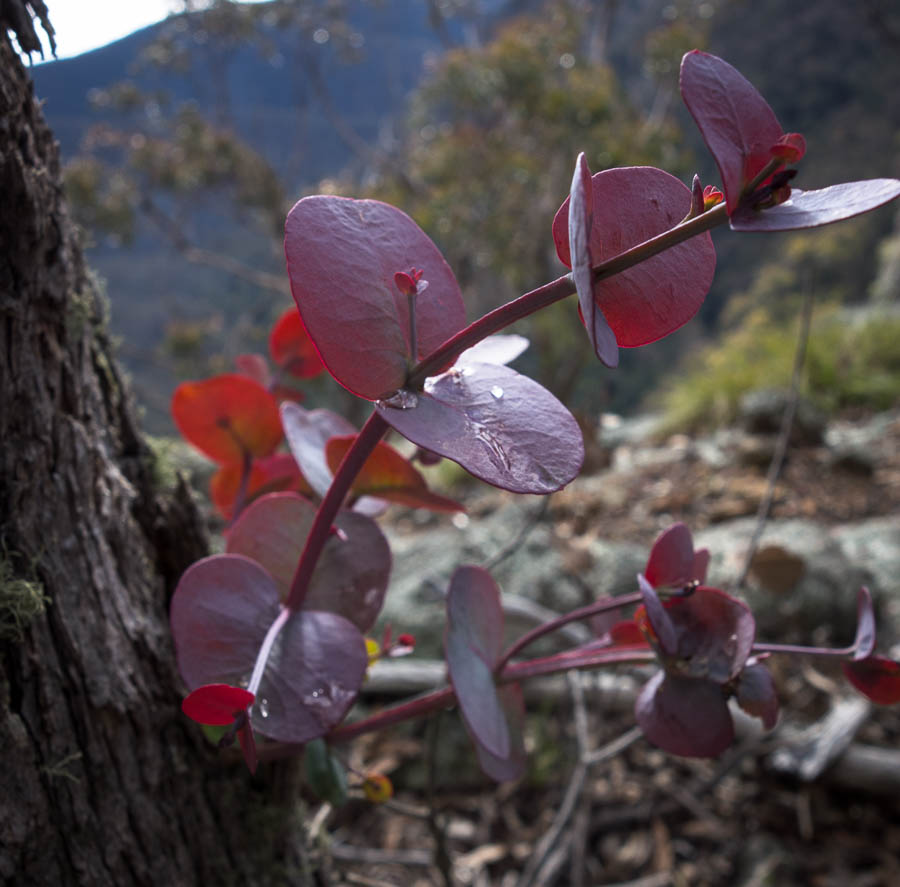 New growth – not sure why, this area is unburnt 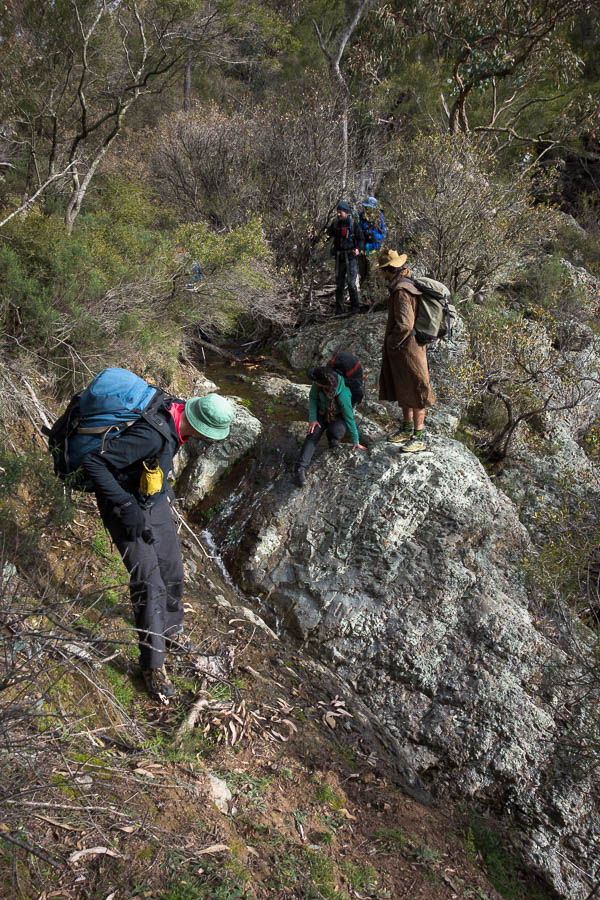 Arriving at a potential camp a bit too late for a side trip I had planned I ummed and ahhed about whether we would camp high. Having had some spectacular high camps recently I was keen on the idea – but also aware it was a lot colder than the previous weekends we had been out. In the end I decided it was a nice spot and I didn’t have a certain low camp spot in mind, so better to stick with a known one. Keen to keep moving to avoid getting cold everyone came on a water run despite only half of us needing water. There was no problem finding water in the creek we dropped into. We saw a wild dog (probably trying to catch a goat!) just before we headed off to get water so were glad to see our gear was untouched when we got back. 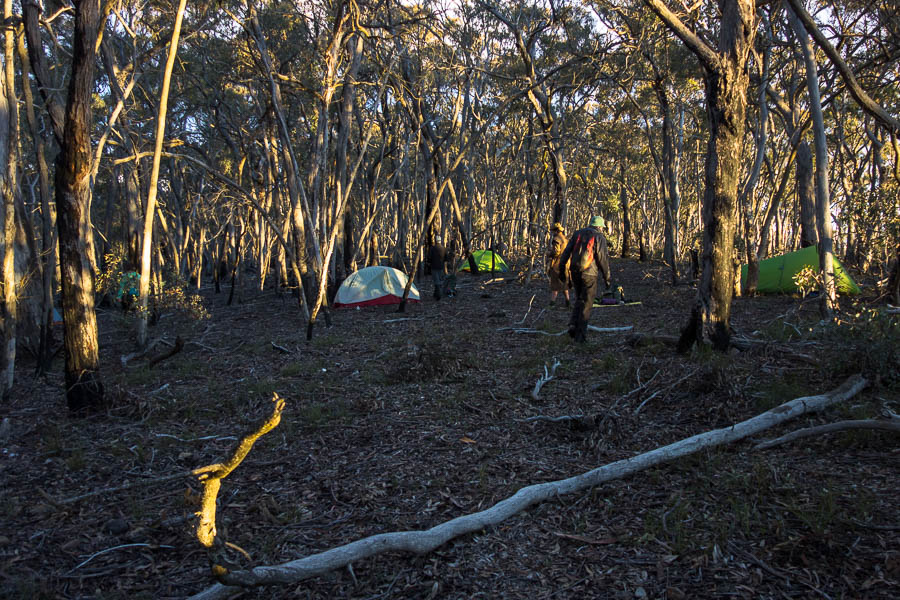 Getting back to camp it was almost sunset so we headed out to the cliffs. I had barely put together 3 crackers & cheese before my fingers could hardly hold the knife. The wind was biting and after about 10 minutes half of us decided we couldn’t hack the cold and headed back to the relative shelter of the trees. 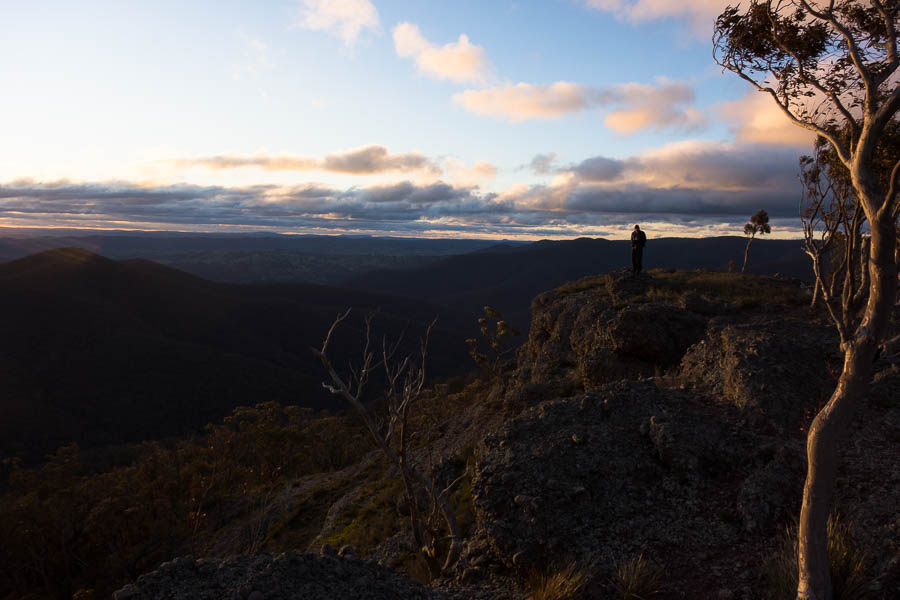 Sunset on the cliffs

There was some grumbling about the lack of fire – they are not permitted under the Winburndale Plan of Management. Everyone had been warned in advance so should have come prepared. Gas canisters were being nursed inside our down jacket to improve their performance. Vivien’s metho needed the same treatment as it wouldn’t light initially. There were some very early retirements to bed and sleeping bags to try and get warm. Alex, in somewhat typical fashion, had forgotten his usual sleeping “mat” (ratty piece of foam). Fortunately for him Vivien had gone exploring when we first arrived at camp and miraculously found an almost brand new compact foam mat in the bush. 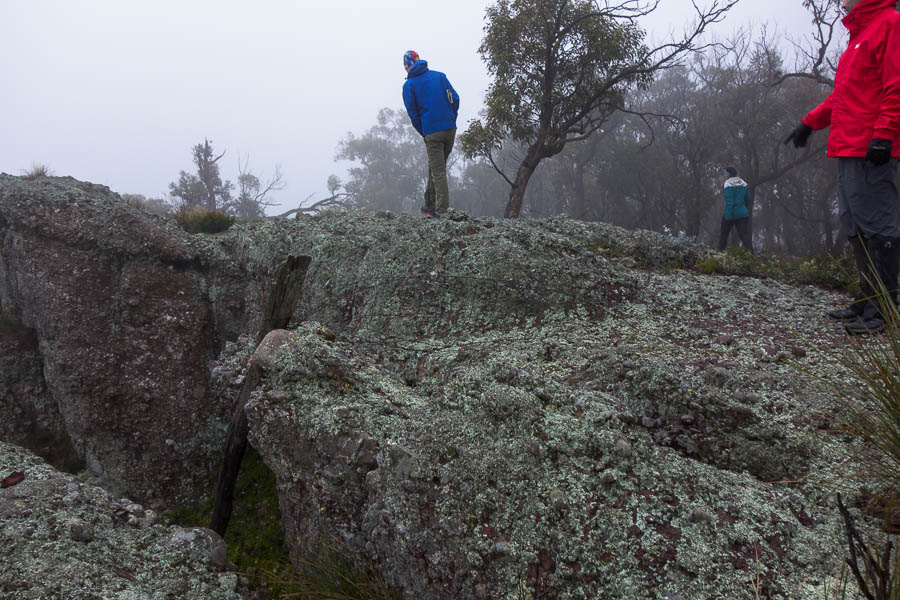 Next morning exploration in the cloud

I think we all had a fairly cold night, and getting up wasn’t a particularly enticing idea when we were engulfed in cloud. The advantage of not having a fire was that I felt no guilt in boiling the billy in our vestibule and having coffee and breakfast in the tent. I replanned the route given the weather. I ditched a loop to the north and added few more fire trails instead of creeks given the general damp feeling. Vivien & Lauren suggested we go for a short walk along the cliffs as there were good views (or had been the night before!). We started off in the cloud with no views but by the time we got to the edge it had lifted enough to see what was out there. 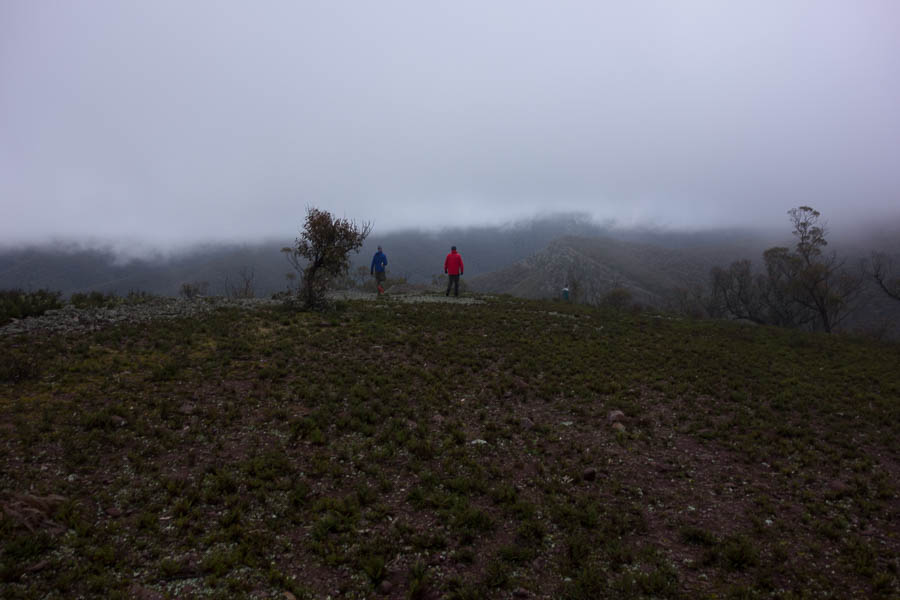 The cloud starts to lift so we get some distant views 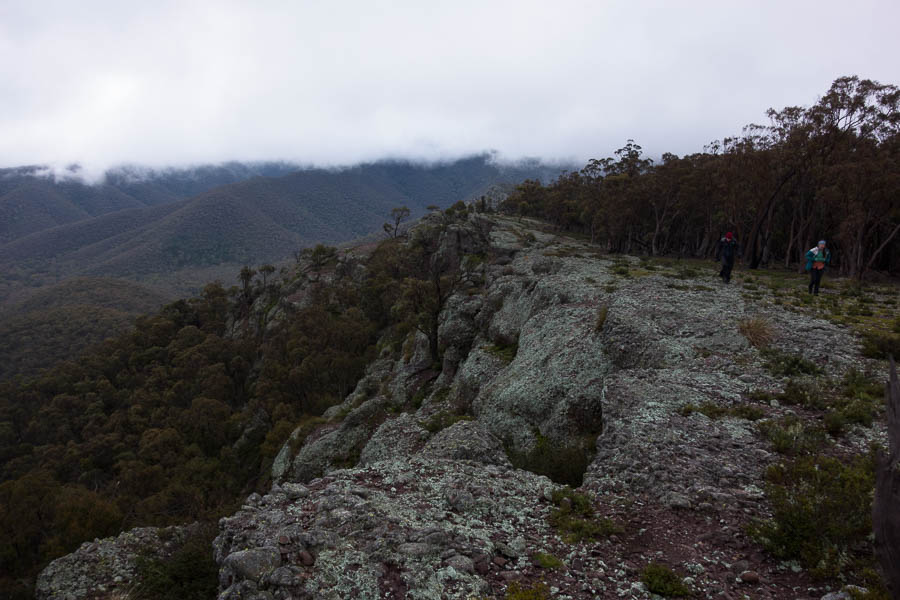 Back with our packs we headed off soon heading down, down, down into a creek. Being the upper reaches I wasn’t expecting much but it was flowing and had some interesting conglomerate rocks in it. There were some helpful wildlife tracks along the edge but after a few hundred metres I decided we’d seen enough and headed up a spur to meet a fire trail. 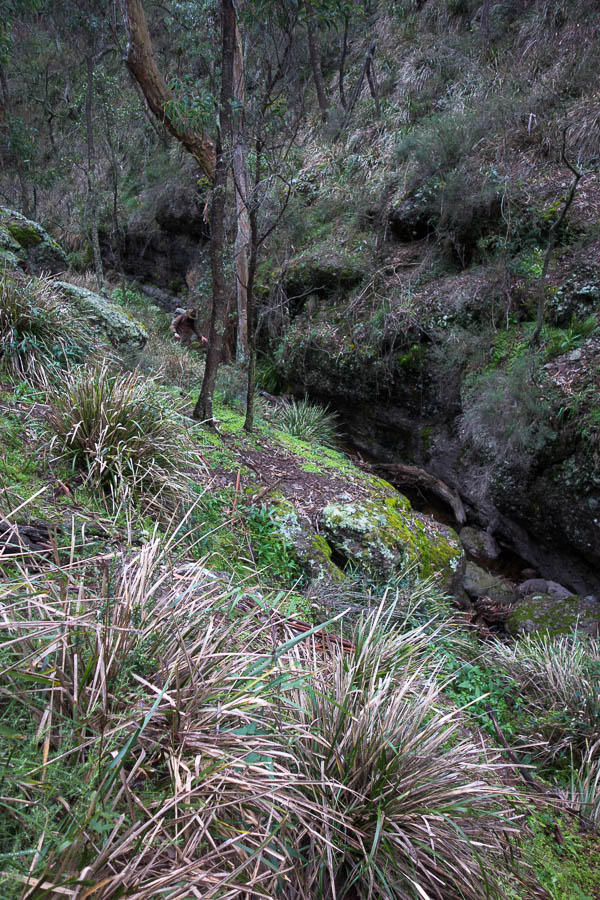 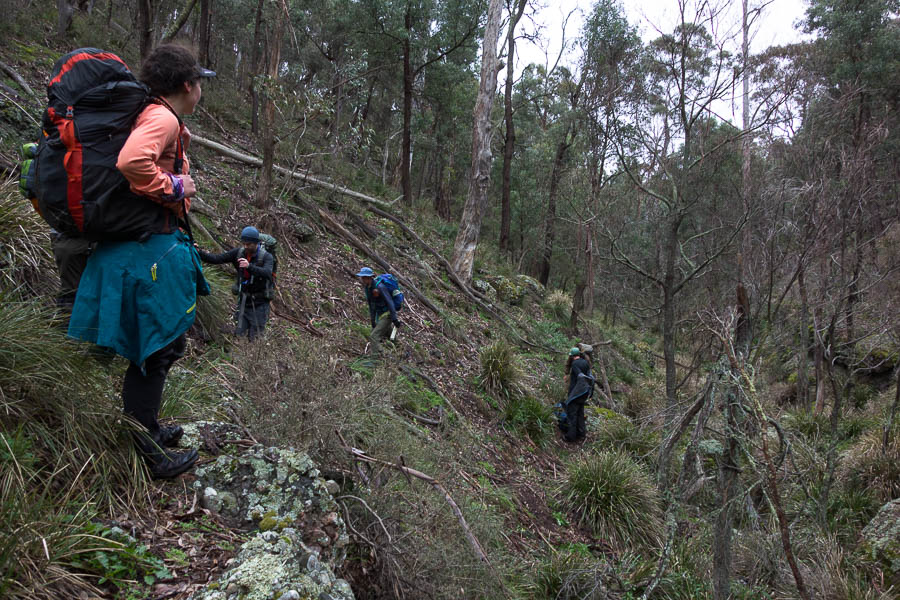 Following (literal) goat tracks along side the creek

We had a short morning tea at the top, the cold didn’t lend itself to lingering, then followed the fire trails for a while. 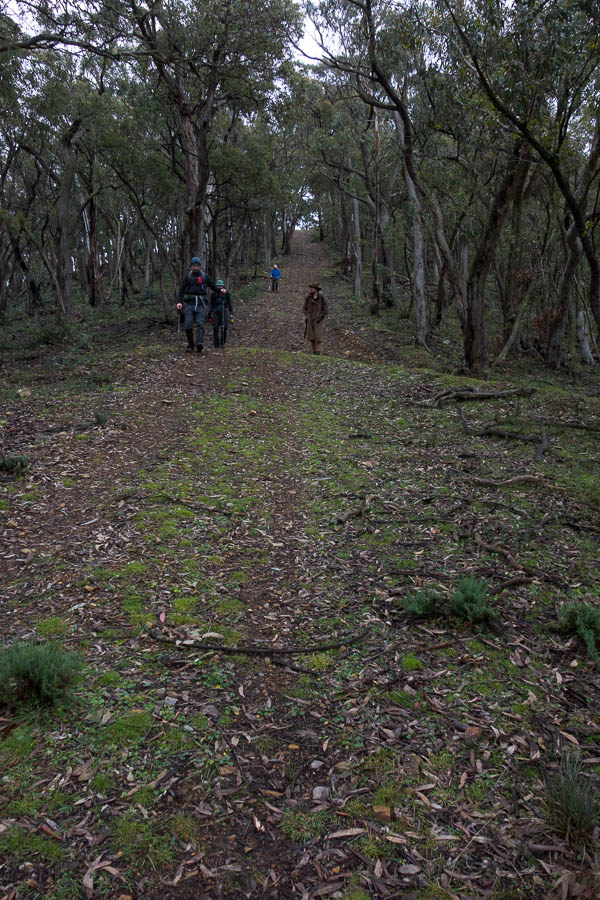 Eventually we headed off the fire trail down a spur. It wasn’t that steep but after several descents already in the trip I think most of our stabilising muscles were protesting from lack of use. Finding a lovely lunch spot near the bottom my legs were glad for a break. 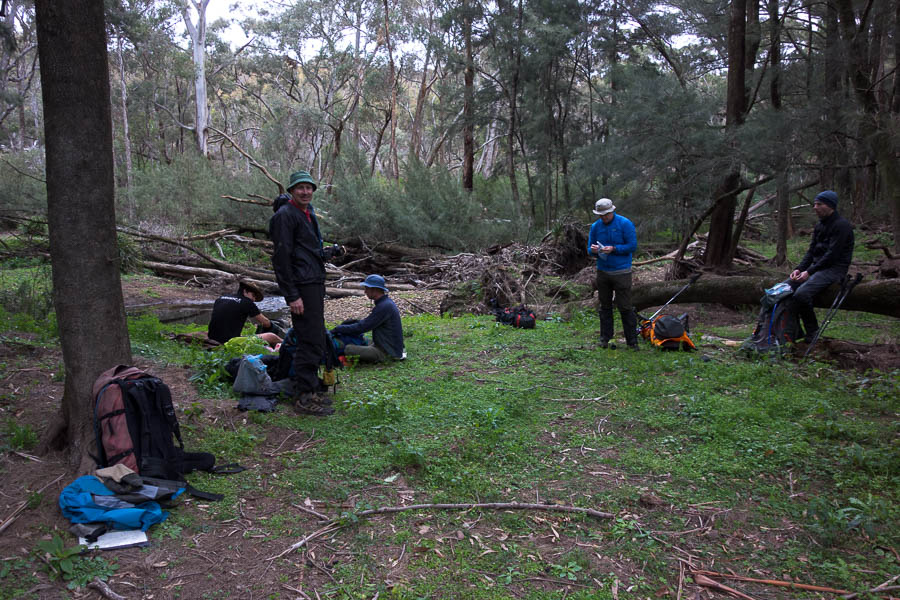 Lovely lunch spot next to a babbling brook

From there it was one more hill back to the cars for a mid-afternoon finish. Winburndale is unburnt, beautiful bushwalking country – very little scrub, mainly open eucalypt forest. There’s definitely a few more adventures to be had there – hopefully in slightly warmer weather though!