Winter in Sydney had been something of a non-event, a string of records for most consecutive days over 20°C, amongst general mildness. Of course just as a trip Tom had planned on the SBW calendar 3 months earlier was due a polar vortex was heading for NSW. The wind was the biggest concern as the original plan had us camping on the tops facing west. After much deliberating, giving the group the opportunity to drop out (half took the chance), the rest of us were scheduled to meet up on Saturday morning, with a revised route that hopefully took us out of the full brunt of the wind. Though there was still the forecast of snow for both days! 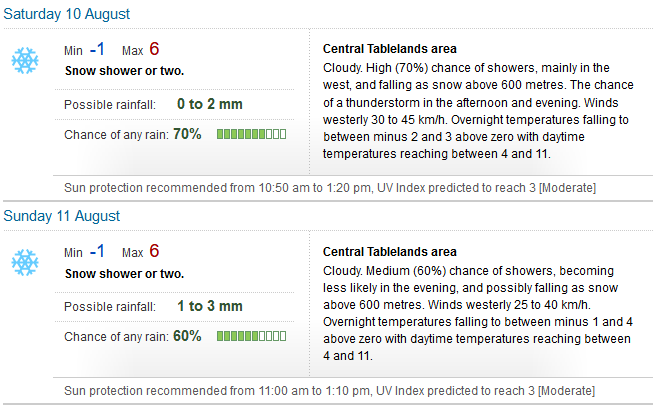 Tom scrapped the Friday night drive-up as we didn’t really want to be camped out in the wind waiting for a tree to fall on us. So very blearily we left our place, with Kirsten, at 5:20am. We saw our first snow going over Mt Tomah and it continued as we headed west. 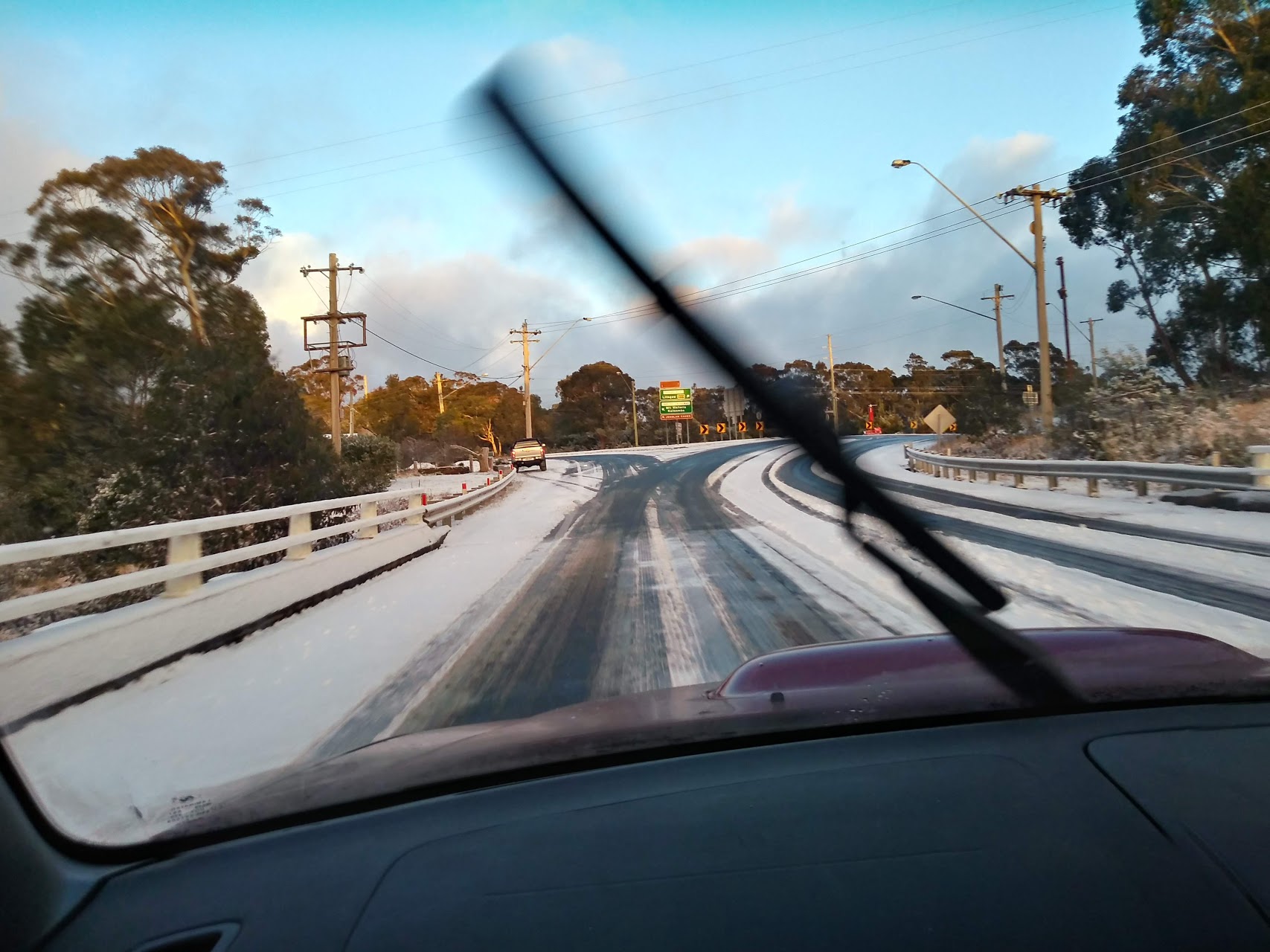 Not much to worry about from a driving perspective but then we got messages from Lauren and Ross saying the Great Western Highway was closed. Lauren was stuck at Wentworth Falls, Ross in Katoomba. The trains were still (mostly) running so they managed to hop on the same train train. That meant we weren’t really in any hurry so had time to stop and have photos in the snow. 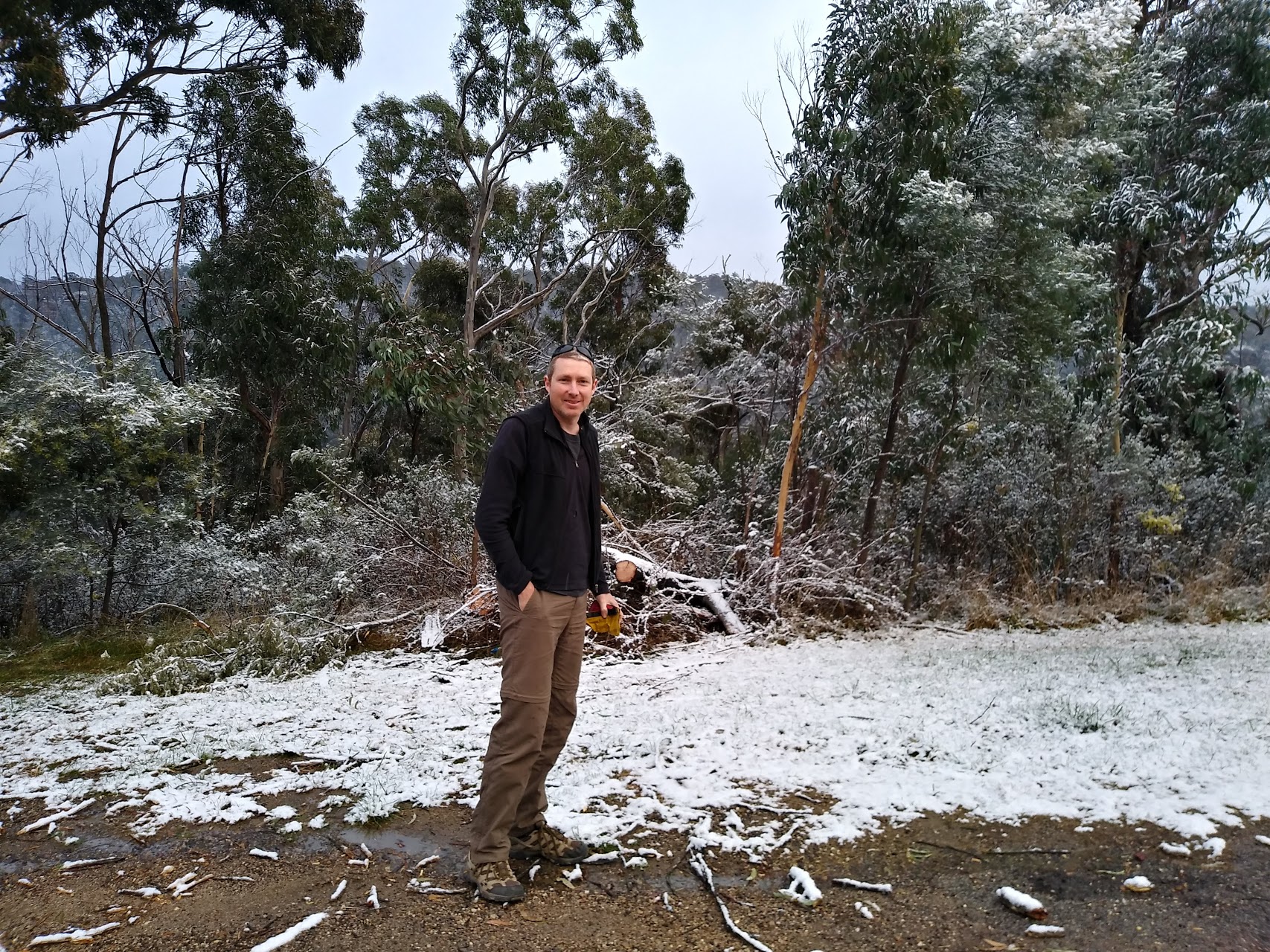 Tom in the snow above Lithgow. It was much thicker on Sunday when we were on our way home.

We were lucky to find an open café in Lithgow at 7:20am on a Saturday morning. Unfortunately it had literally just opened so the heater had just been turned on so it wasn’t much warmer in there then it was outside! But at least we could get a coffee while we waited an hour for the train to arrive. The snow flurries continued to build as we watched out the windows. As we drove out of Lithgow, with 5 of us squeezed in the car, I did wonder what we were thinking! Fortunately once we descended into the Wolgan Valley things cleared and it just seemed to be a normal, albeit cold, winter’s day.

Arriving somewhat later than planned Tom had already adjusted the previously adjusted route. It was pretty pleasant walking early on, particularly since we got to drop packs and few times to go and explore various side gullies. 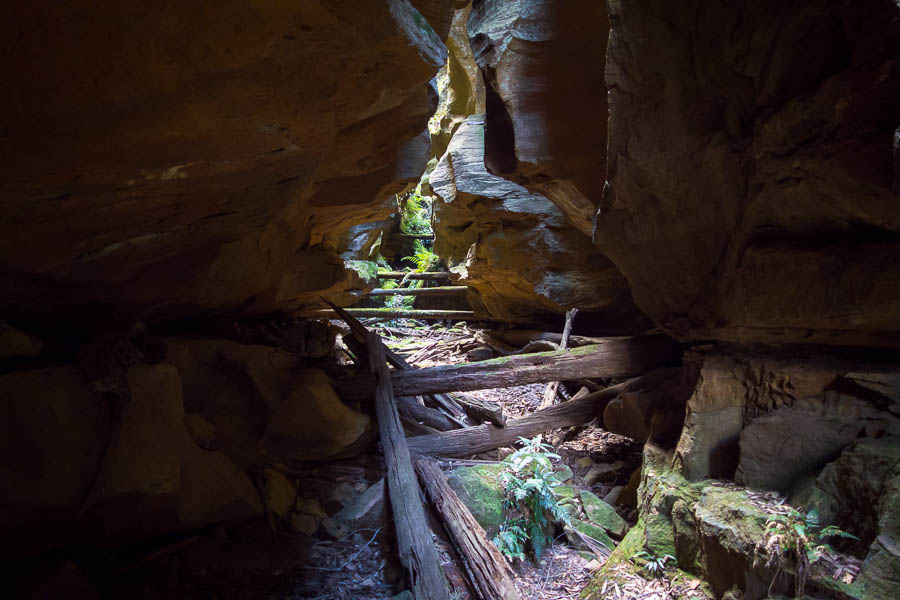 Interesting historical feature in this canyon 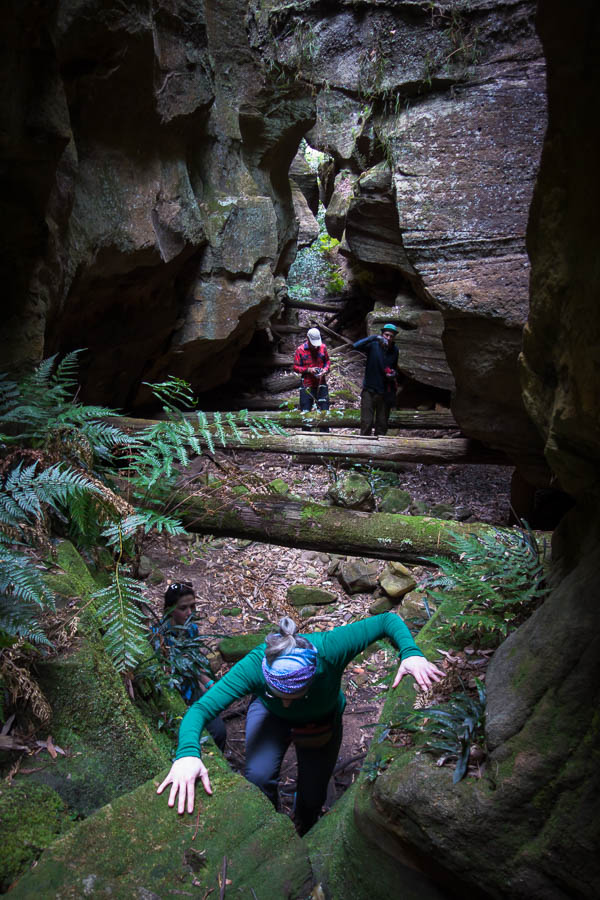 Climbing up a side gully 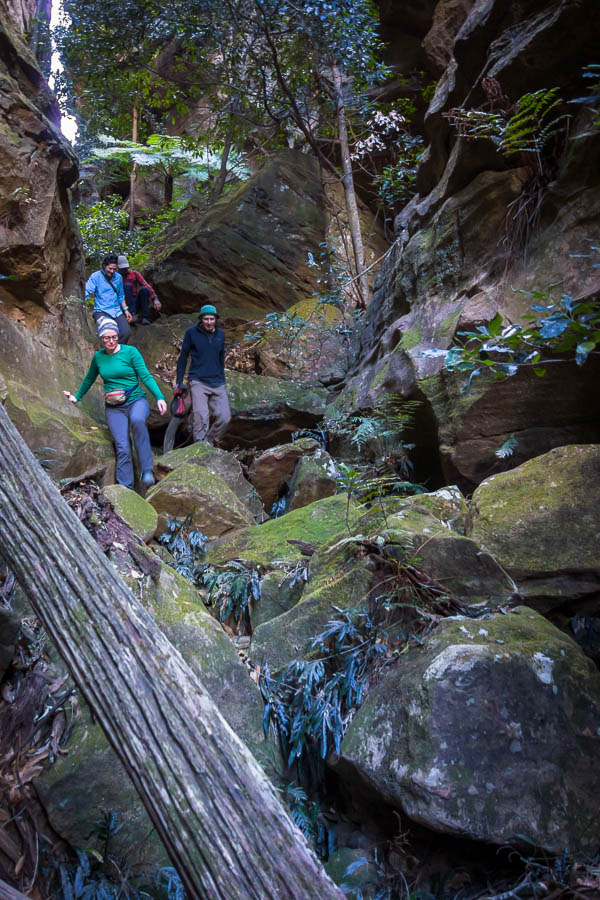 In the side gully 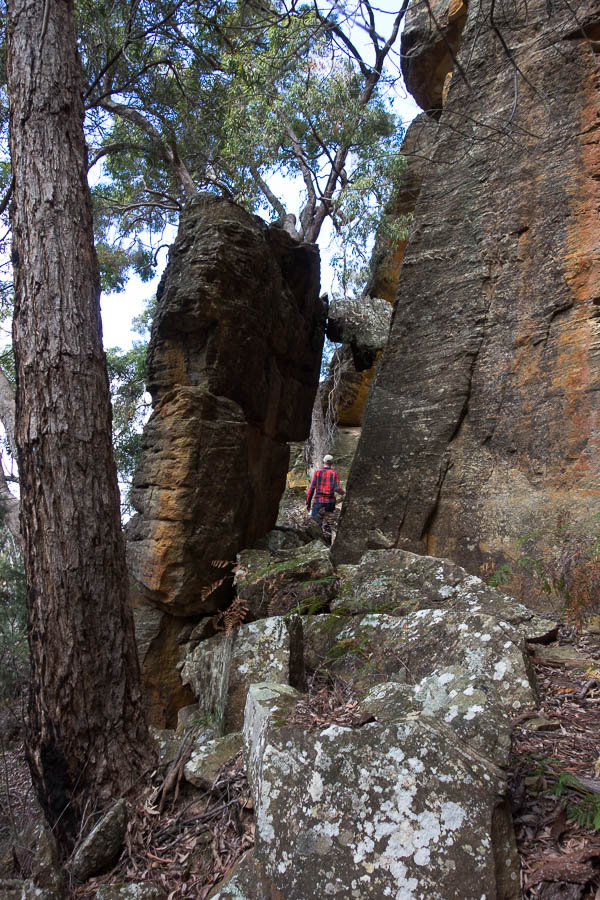 It had been largely dry to start with but we’d copped one bout of sleet/hail, and so we were glad to have some protection for lunch in an overhang. With the temperatures we had though you didn’t want to be sitting around for too long – not when we had 4km to cover in 4 hours and Tom thought we might be pushing it to make it before dark! 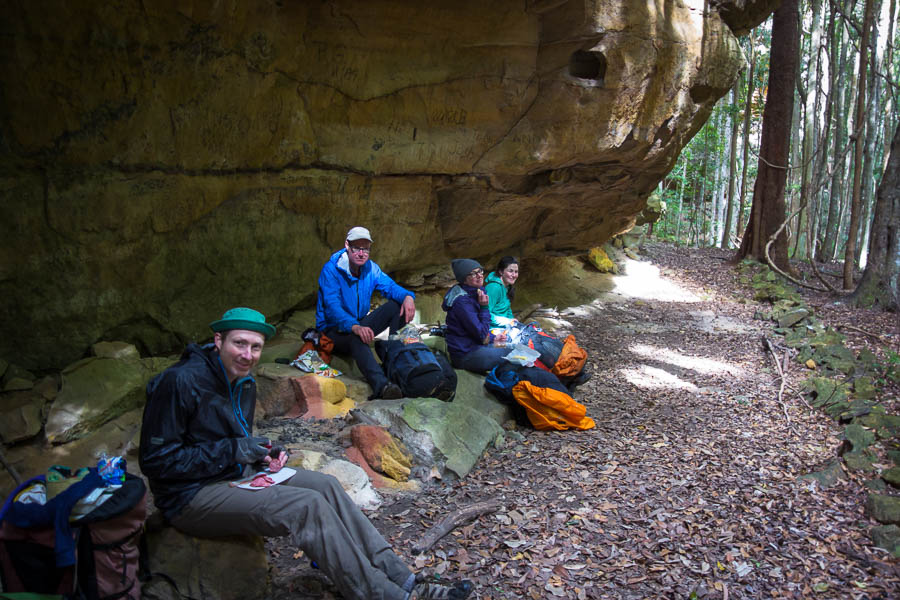 There was some medium scrub to get up on the tops and then it was relatively straight-forward (if a bit meandering) to make it to a lookout as another rain band passed over us. At just the right time the skies cleared and we could take in the beautiful Wollemi wilderness. But not for long as we still needed to get to camp! 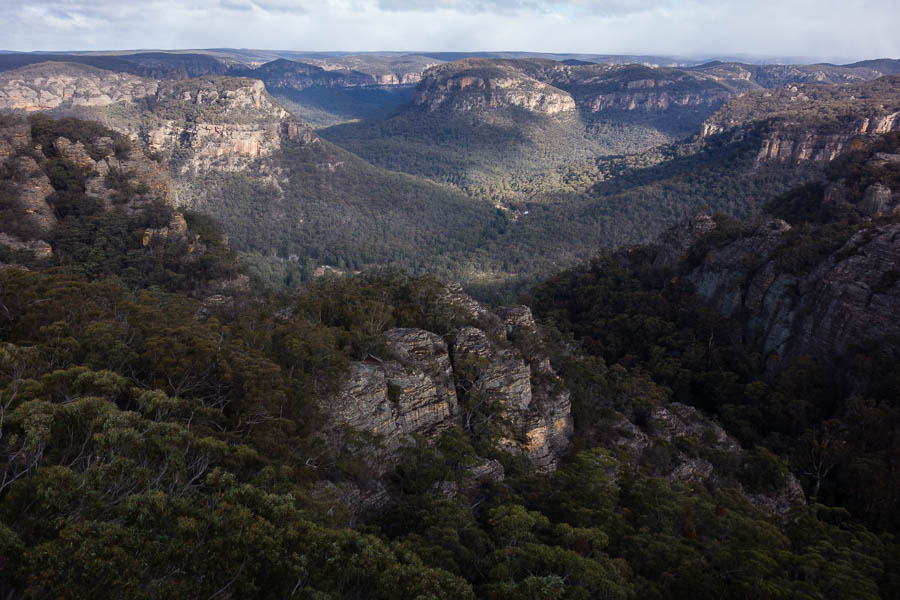 Tom promised views… and he delivered (on Saturday at least) 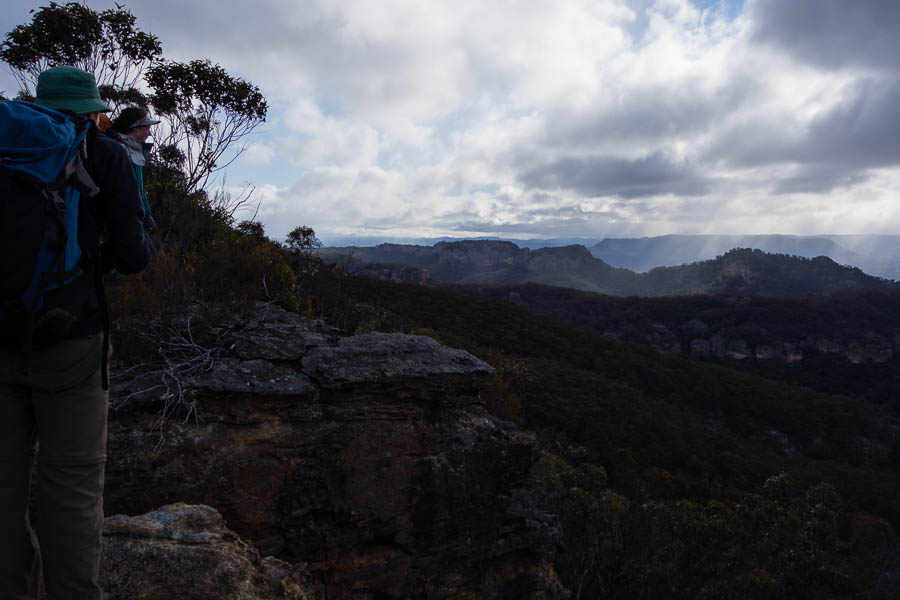 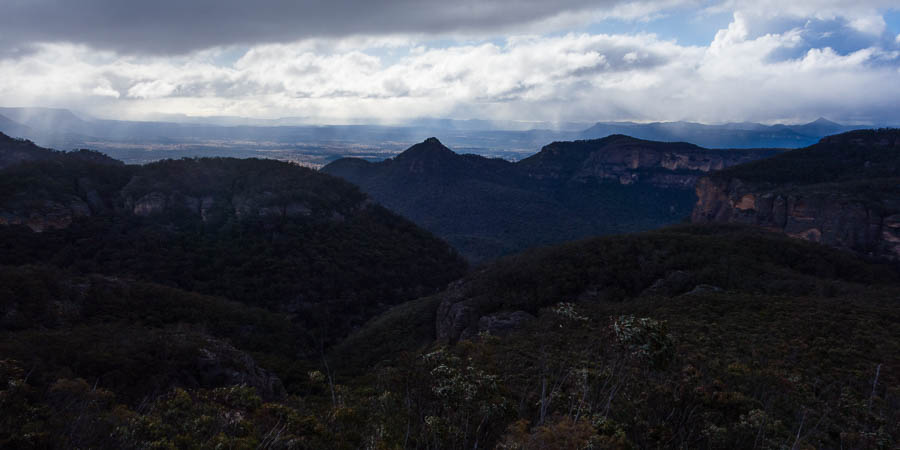 We didn’t have too many issues finding our way down into the creek, Tom’s memory of a trip 10 years ago seemed to be serving us pretty well (other than a small side canyon we failed to find just before lunch). I think he was starting to get a little worried as the camp cave he was expecting hadn’t materialised…. 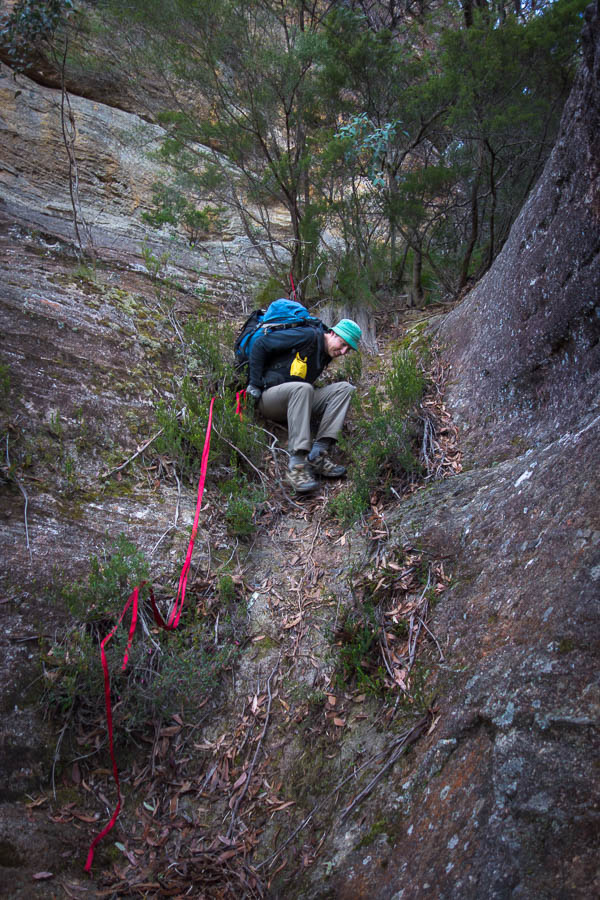 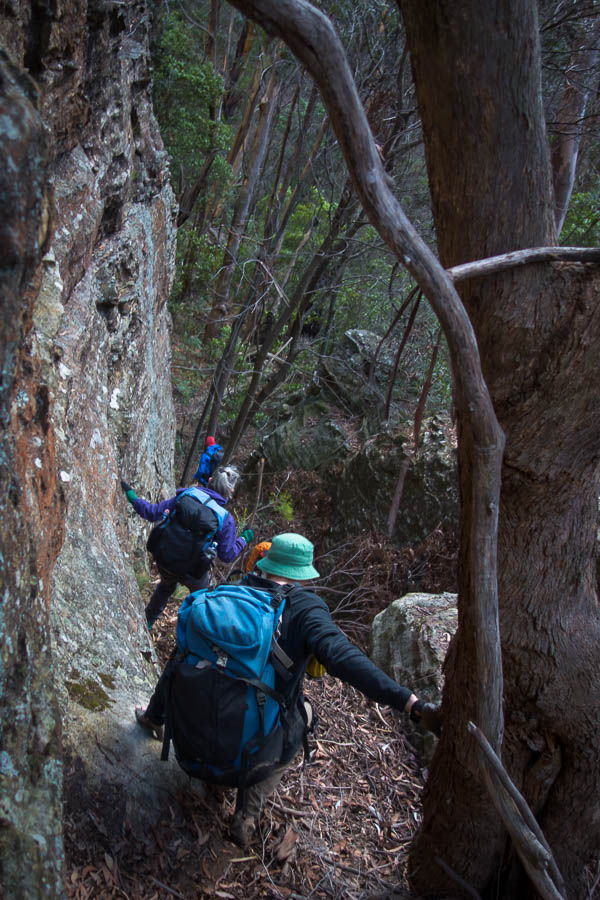 It was just a little further on than he expected. Strong winds are good for something – lots of recently fallen branches – we soon had a good fire going and could warm up. While I’m sure it was more sheltered down in the creek than on the tops it was still pretty breezy from time to time. And despite the fire and many layers for once I was glad I had brought my down jacket along. 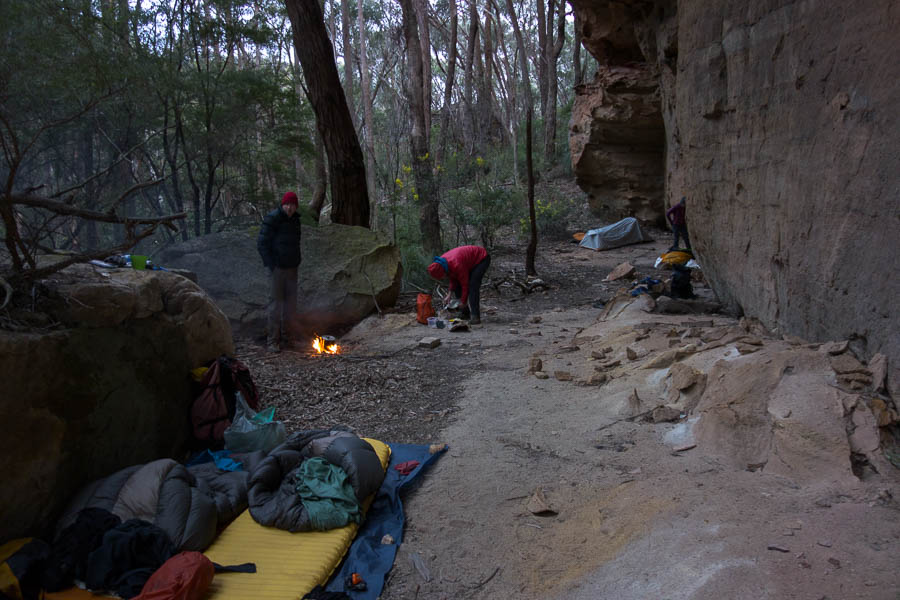 Our camp cave – not so protective on a windy night

I was warm overnight, if not completely dry as the wind would occasionally blow in a bit of sleet. It was raining / snow flurrying as we set off in the morning, but we had a climb to warm us up almost straight away. 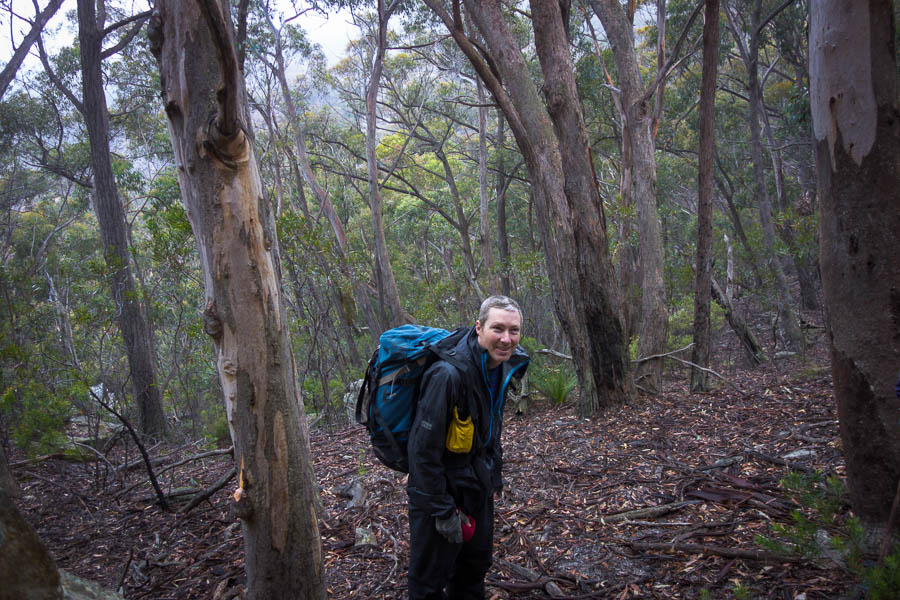 What you can’t see in this photo is the snow flurry!

Being in dry canyons is quite pleasant in this sort of weather, and we (mostly) had a fun time negotiating a couple of small drops. The latter, which I don’t have any pictures of, involved a wriggle through a cave. 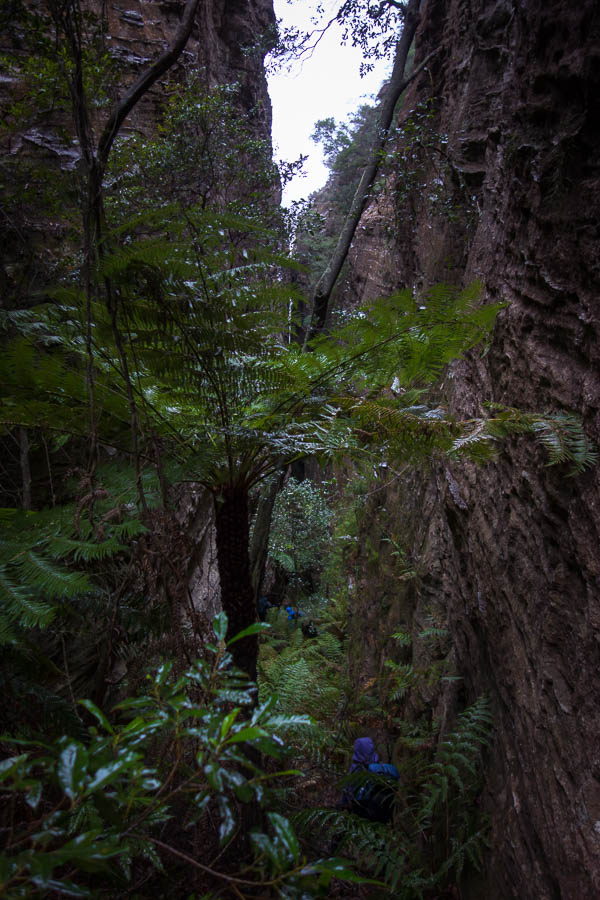 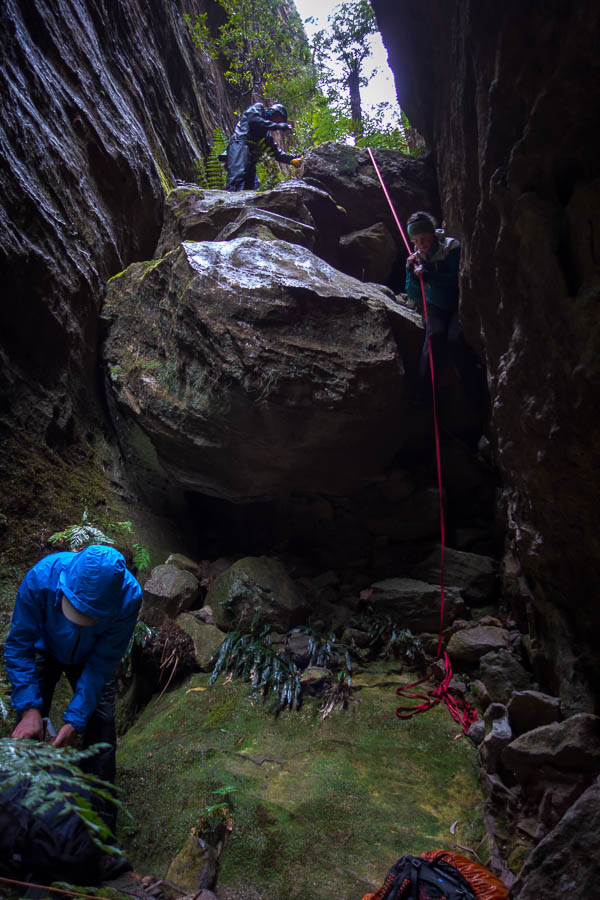 Fortunately (or unfortunately depending on your perspective) there was a bail out option mid-morning. The rain had been fairly constant to date and while we ate morning tea in another convenient overhang it didn’t let up. I think there was only one disappointed party member when the leader decided we were going to take the quick way back to the car. It didn’t take long for us to get wet pushing through the undergrowth. We ebbed and flowed on our contentedness with the decision as the sun occasionally popped out, or another snow flurry came through. 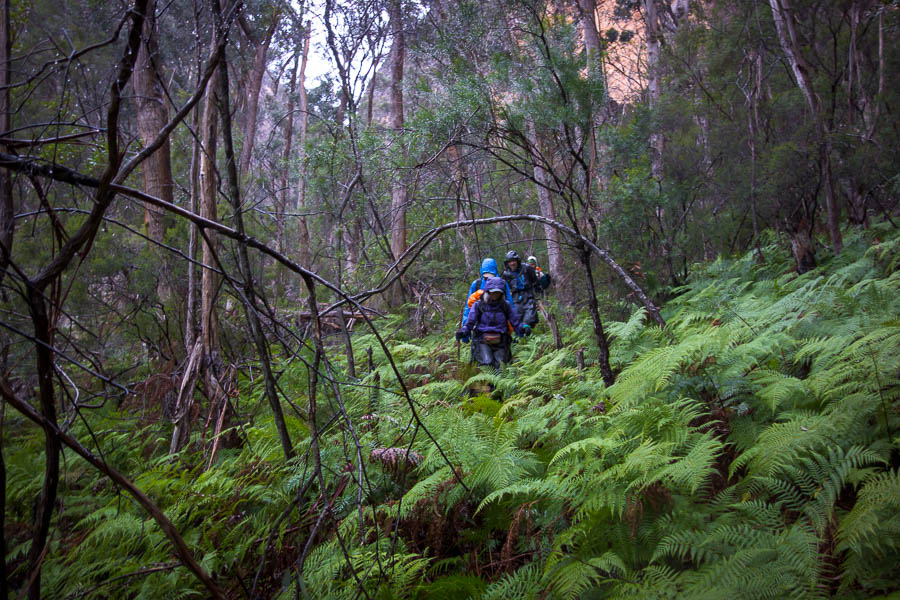 Walking through saturated ferns – guaranteed to get wet!

It was raining at the car and so we just piled 5 wet bodies in and headed out, wondering whether we were going to be stuck in Lithgow for the night! The snow drifts were impressive as we approached Lithgow but the major roads to Sydney were open. The traffic was heavy through the mountains due to all the ‘snow tourists’. Wanting to avoid the traffic we put Lauren & Ross on the train and headed home via Bells Line – which was scenic with plenty of deep drifts. An enjoyable weekend out, if a bit chilly at times.