Coming up with new trips for the Club Program takes time, and for once I decided a repeat trip was in order. I’d led the same route in 2017 and thought it was good enough to do again without 10 years in between. Plus I figured there’s a limited time before the vegetation in the Nattai River recovers from the floods so best to get as much walking in while it’s relatively open and easy-going! After a very dry winter coastal NSW got 3 days of consecutive rain in the week leading up to the trip. More rain was forecast for the weekend which wasn’t ideal, but fortunately for us (maybe not so much for the environment) the forecast totals had shrunk to negligible levels by the day before.

So we set off at 8:30am from the car park, treading the section of fire trail which I have now walked several times since my first visit in 2016. Other than Tom the rest of the party hadn’t really walked in the area so I was glad I had included the side-trip out to Ahearn Lookout. The low cloud had lifted by the time we got out there for morning tea. The rock pools were full from the recent rain. 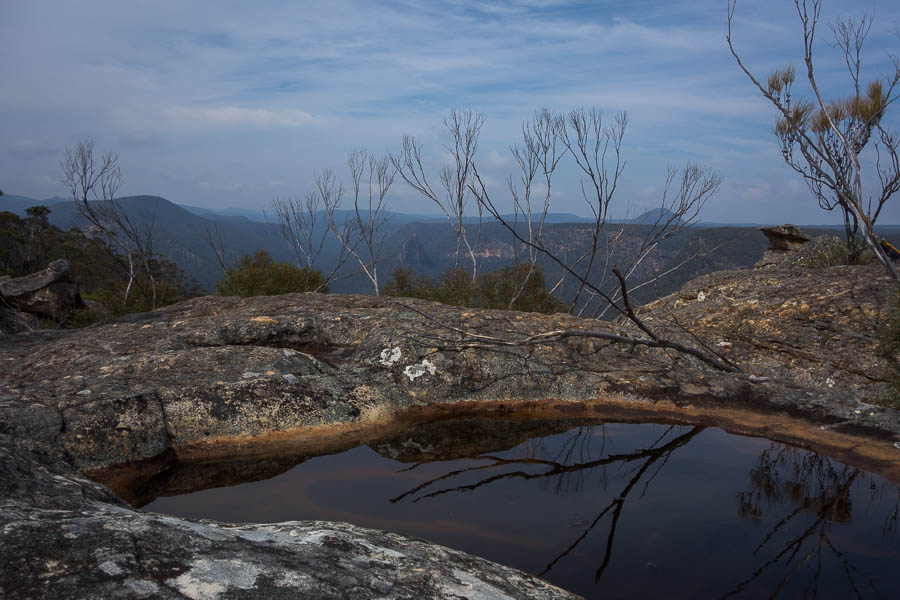 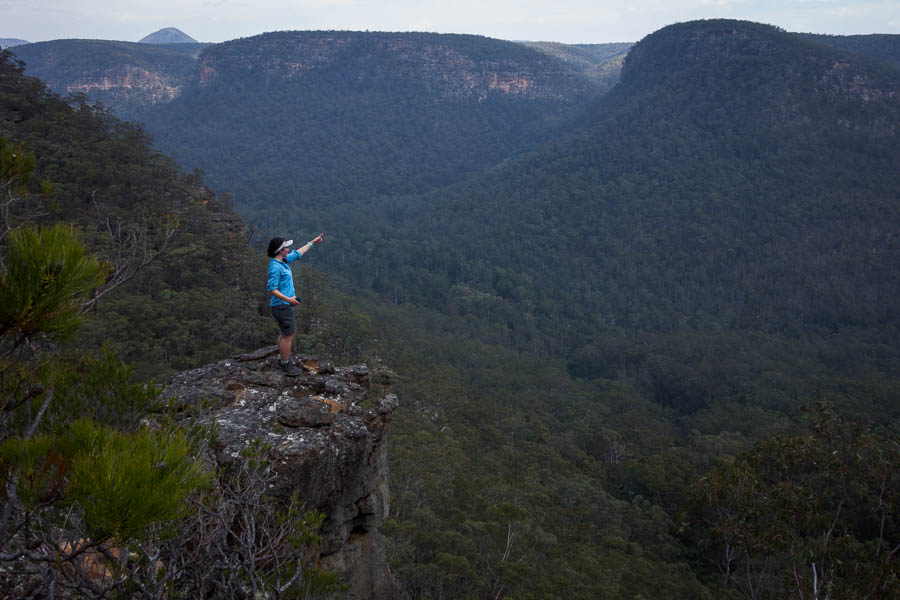 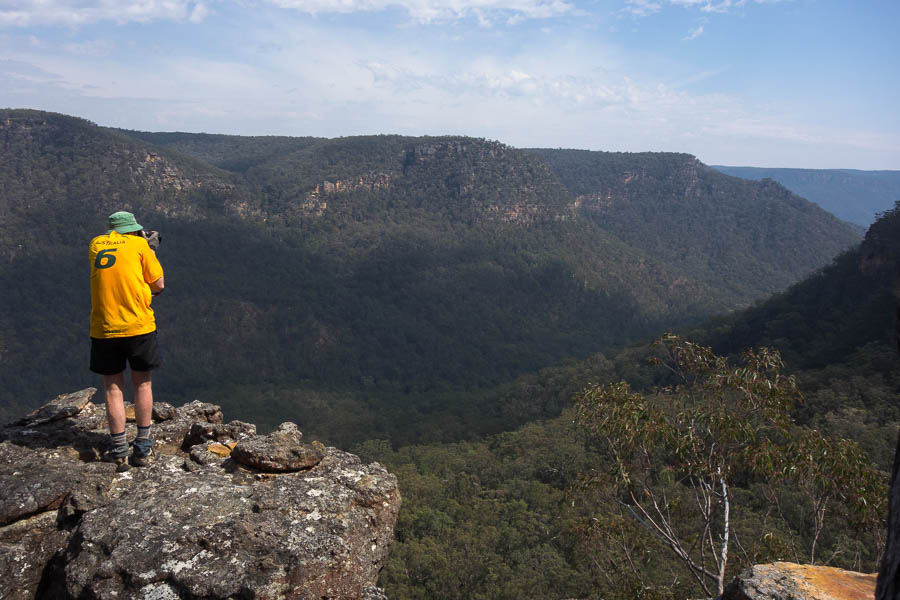 A delightful stand of orchids attracted our attention on the descent to the Nattai. With several keen photographers in the party I think there would have been a mutiny if I hadn’t allowed us to stop for a closer look!

Emilie pointing out a spider in the orchids

We were most surprised to find an orange tree growing in the river bank. It was laden with fruit until Onni went fruit-picking. 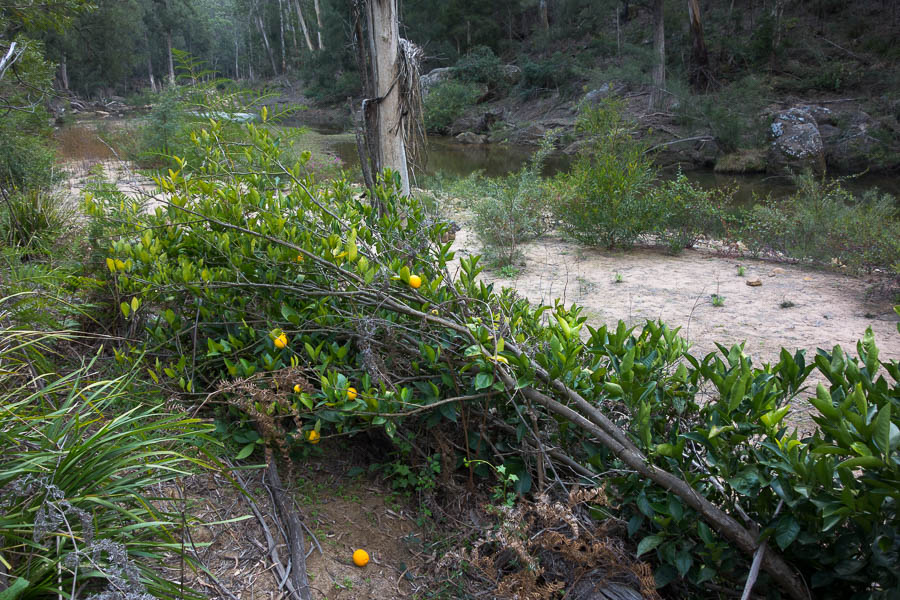 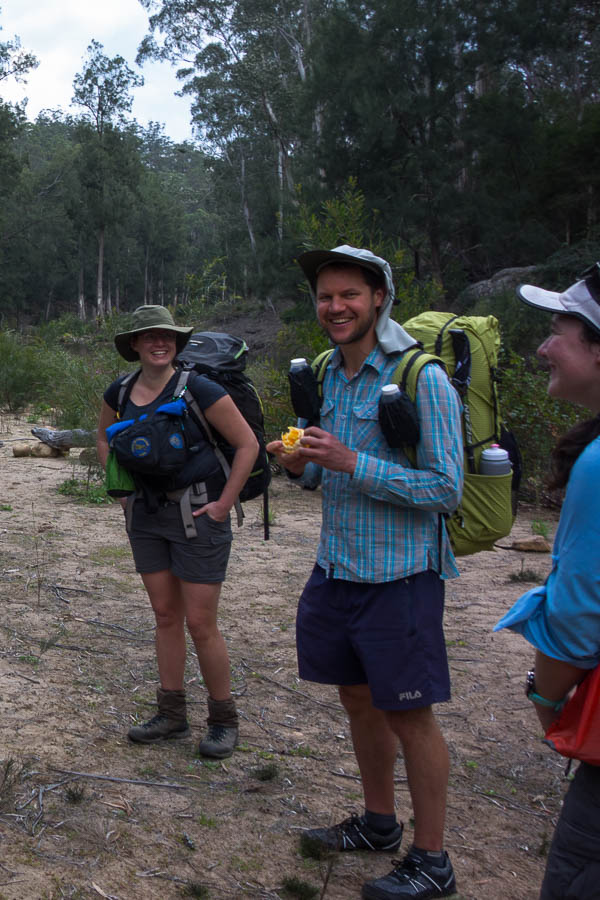 The clouds had started to look a little ominous as we prepared to ascend Russells Needle. Fortunately there were only a few light splotches, not enough to make any of the rock slippery. The tape stayed in my bag as everyone handled the route up confidently. Though not everyone felt the need to attain the true summit. 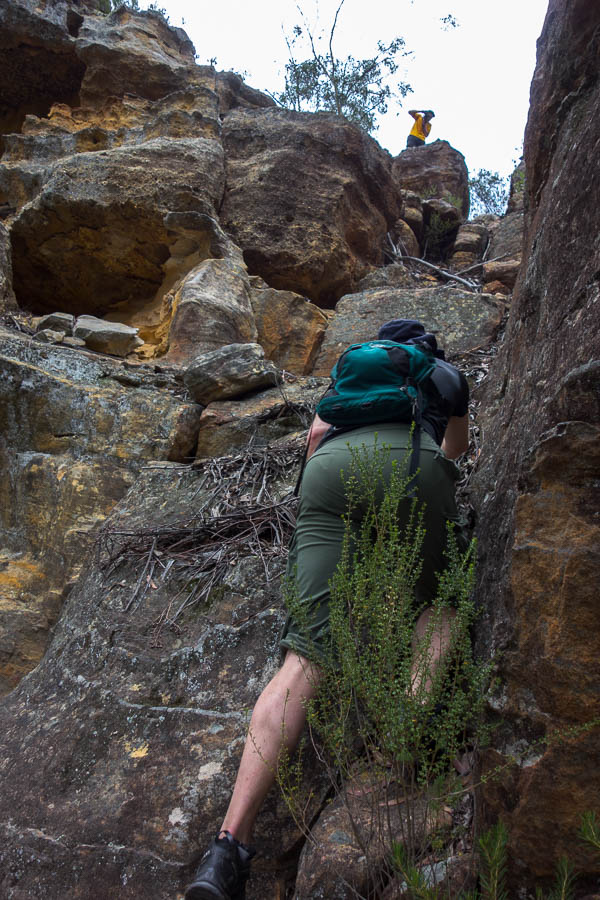 Alex scrambling up to the Russells Needle ridge 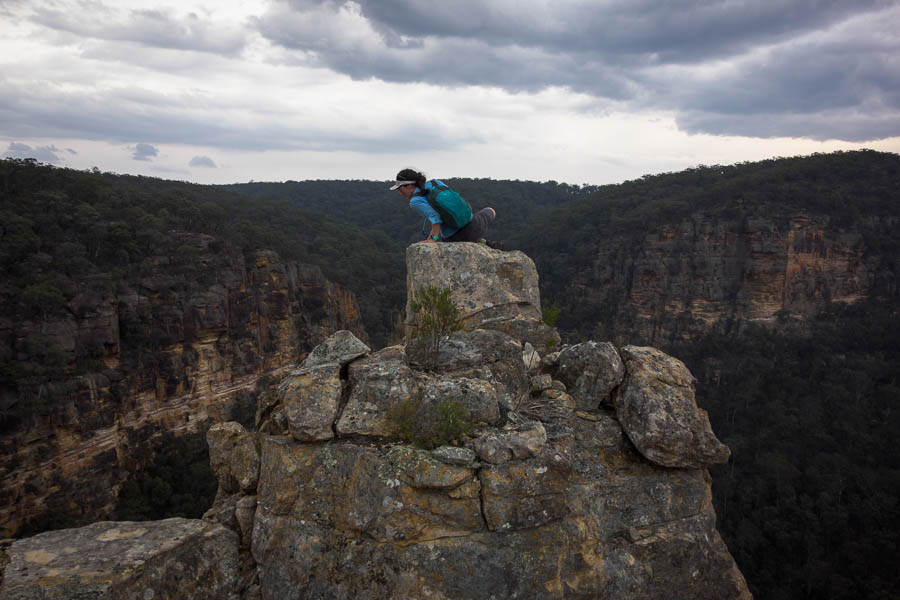 Yep, it’s a long way down 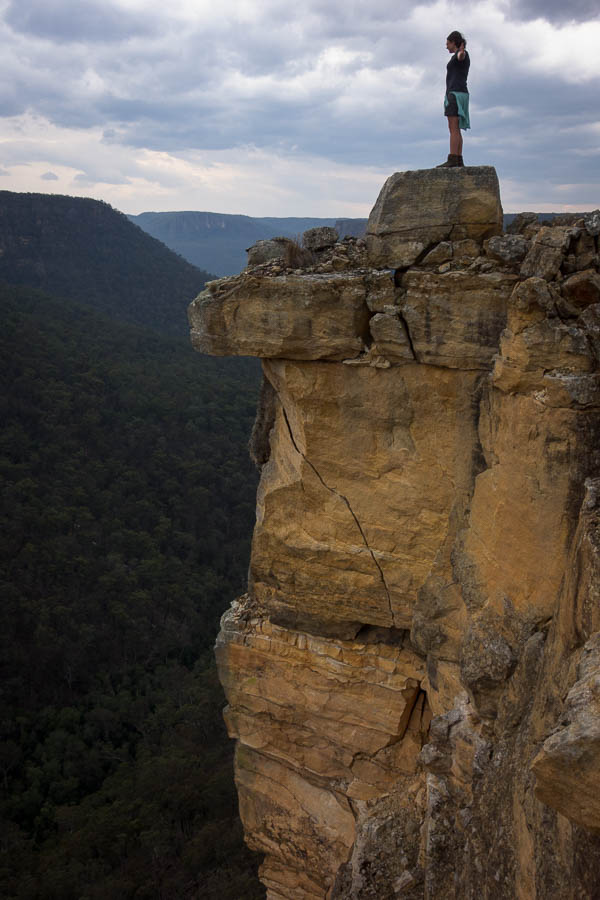 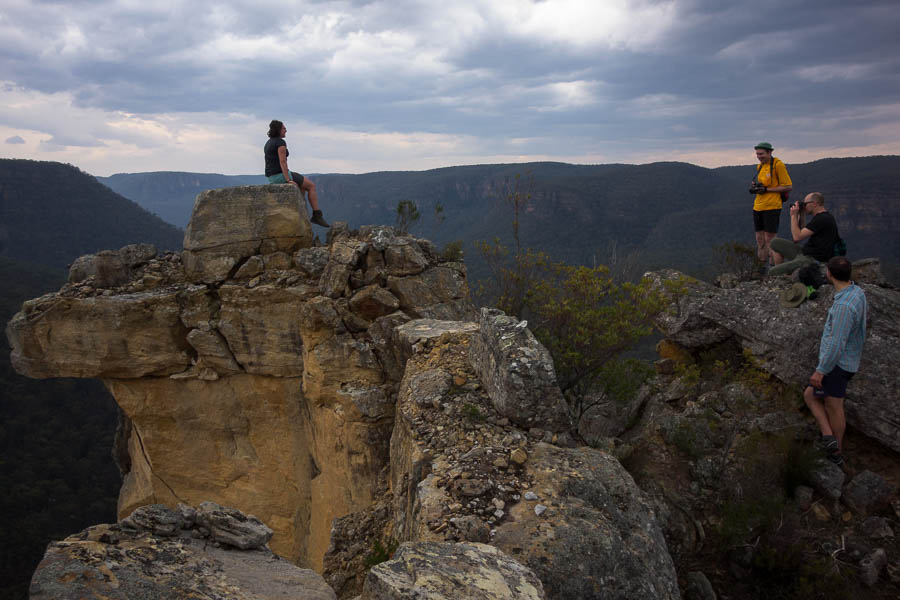 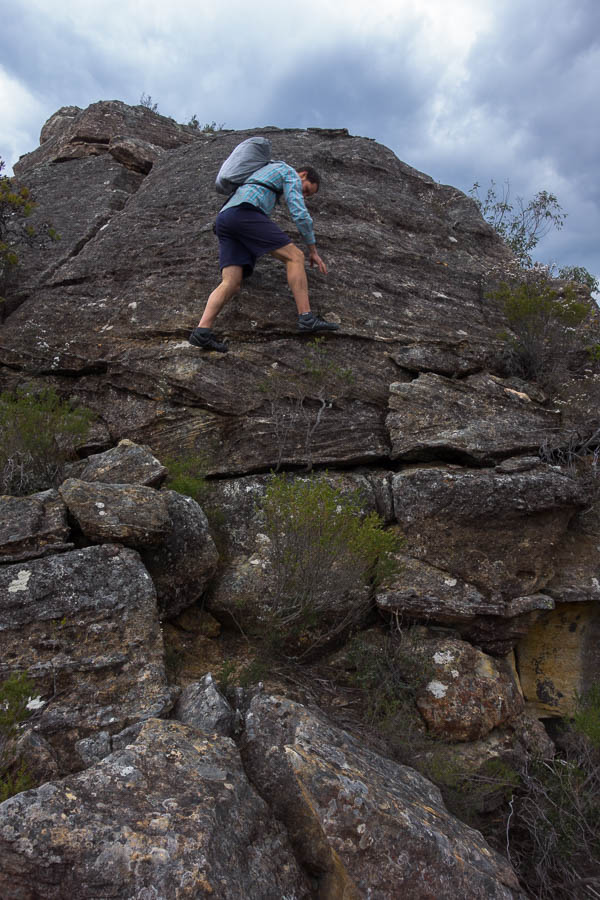 Onni on the (avoidable) scrambling route to the summit

Keen to avoid drinking the Nattai we headed up the side-creek to see if there was water about. With the frog chorus echoing around us we figured it was only a matter of time before we came across some water! We found quite a few reasonable sized pools and filled up. Curiosity not quenched we then went for a further explore upstream with ideas for future exploring being thrown around.

The campsite that we’d used in 2017 seemed a little damp so we headed back downstream to an earlier spot. Of course it was right on arrival that the only reasonable rain for the day arrived. Rather than sit it out we all got our tents up only for the rain to stop pretty much as soon as we’d finished. 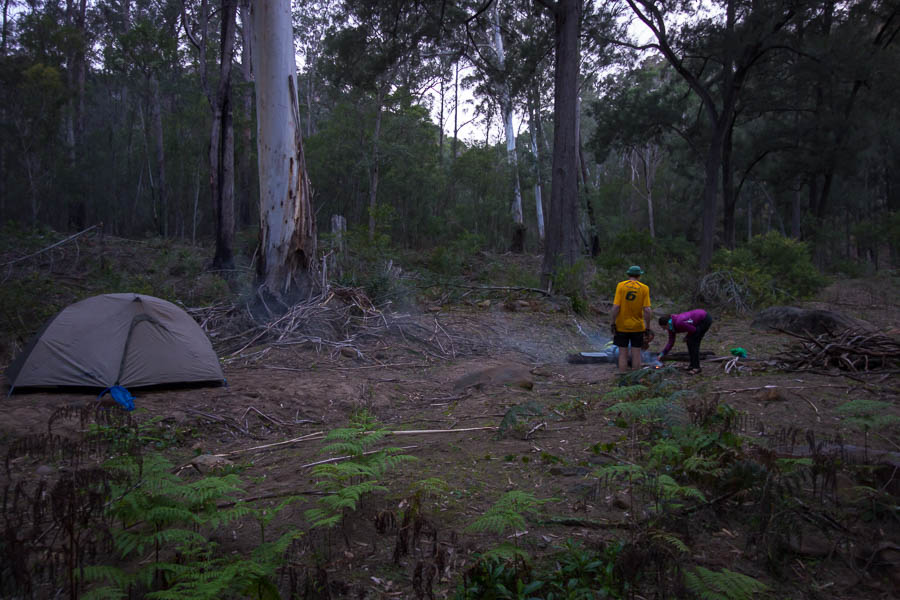 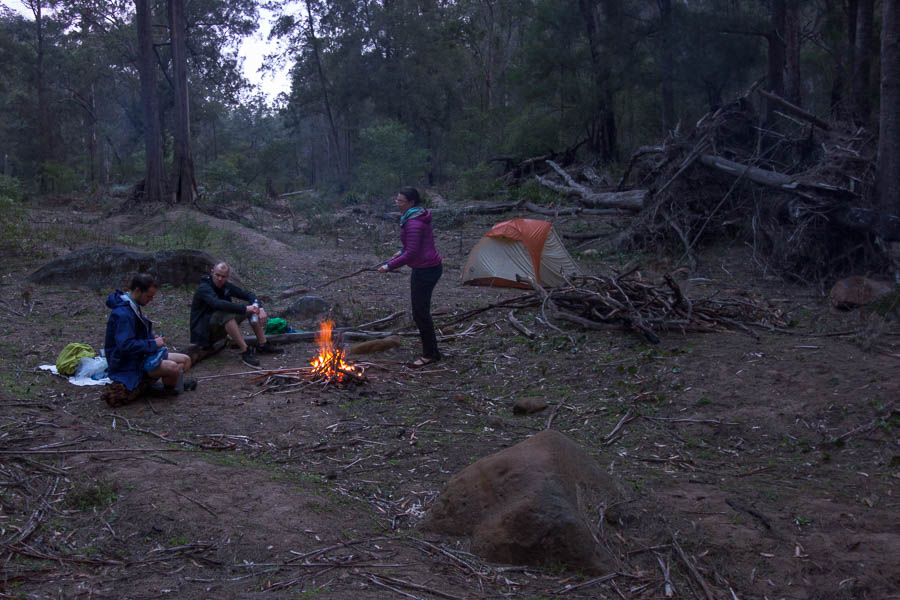 It rained between 6-7am but then cleared which I was glad of as a morning of rock-hopping is much better when the rocks are dry! Though as it turned out, maybe because we were coming off the back of Winter, some of the sections were exceedingly slippery regardless.

I hadn’t spent a lot of looking at timings, or comments, for the previous trip, as my memory was it had all been pretty straight forward. 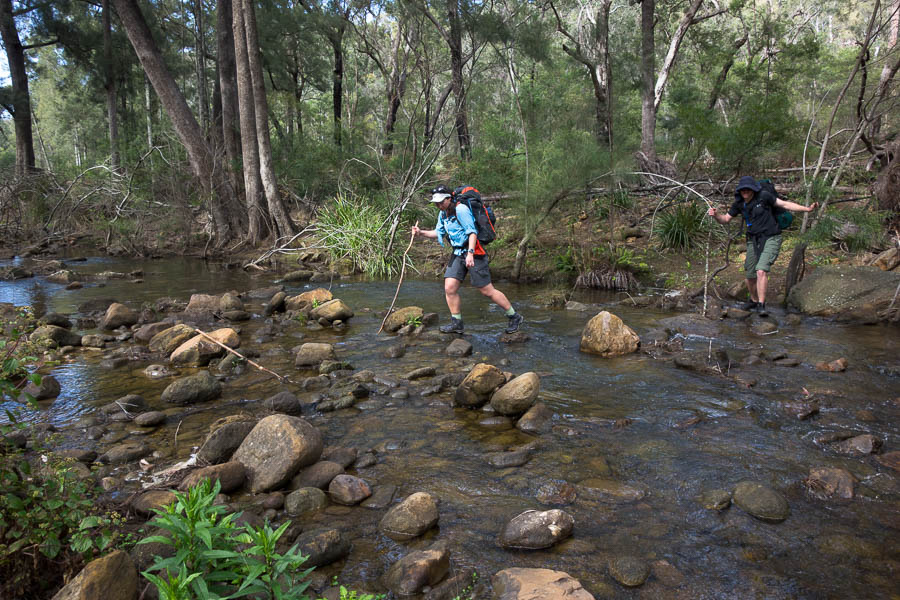 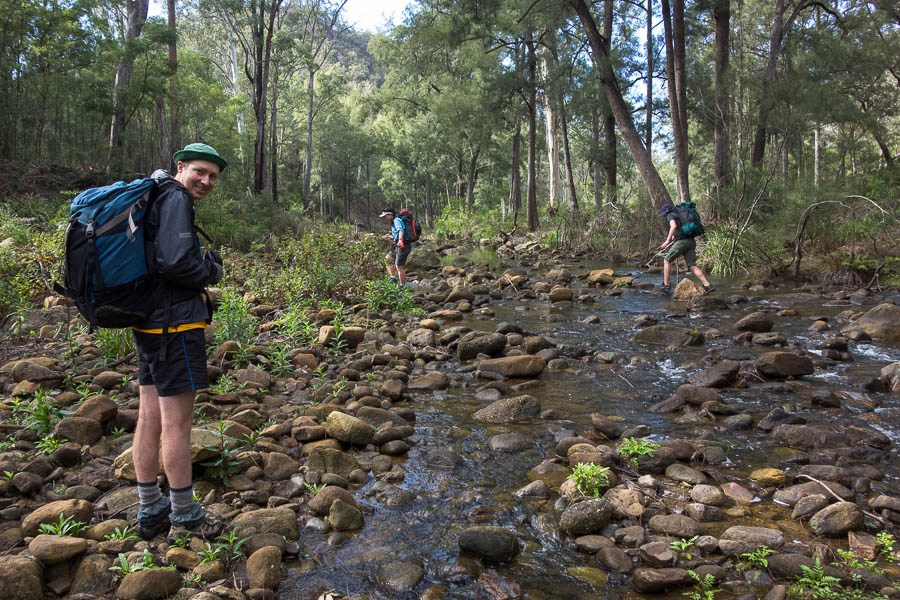 Rocky Waterholes Creek started much the way I remembered – flat with lots of small-ish rocks to hop along. We made good time and the conjecture around the fire the night before about today looking like it could be a short day seemed on point. 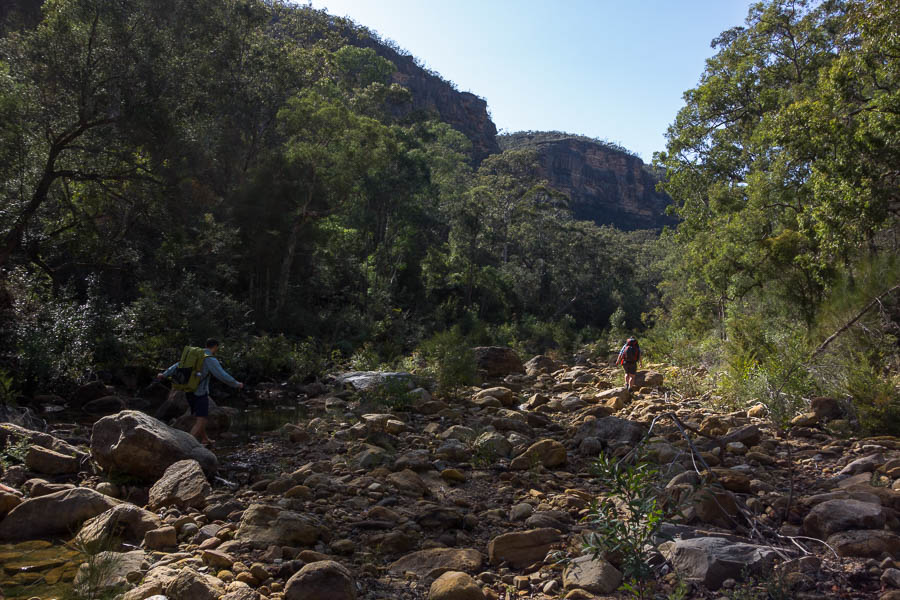 But then the rocks started getting bigger. The route-finding and scrambling got harder. I didn’t really remember the house-sized boulders. (though on checking my previous trip report I do mention them). Our pace slowed considerably. Onni had decided very early on to go for the barefoot option, I was surprised to see he maintained his barefeet almost the entire way up the creek. It did mean he could move more directly up the creek as the rest of us were trying to keep our feet dry. 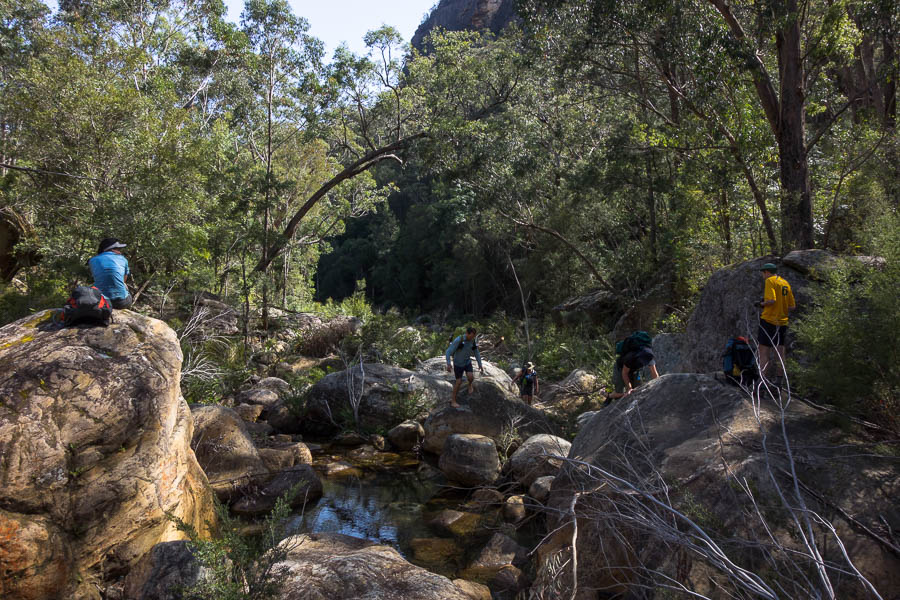 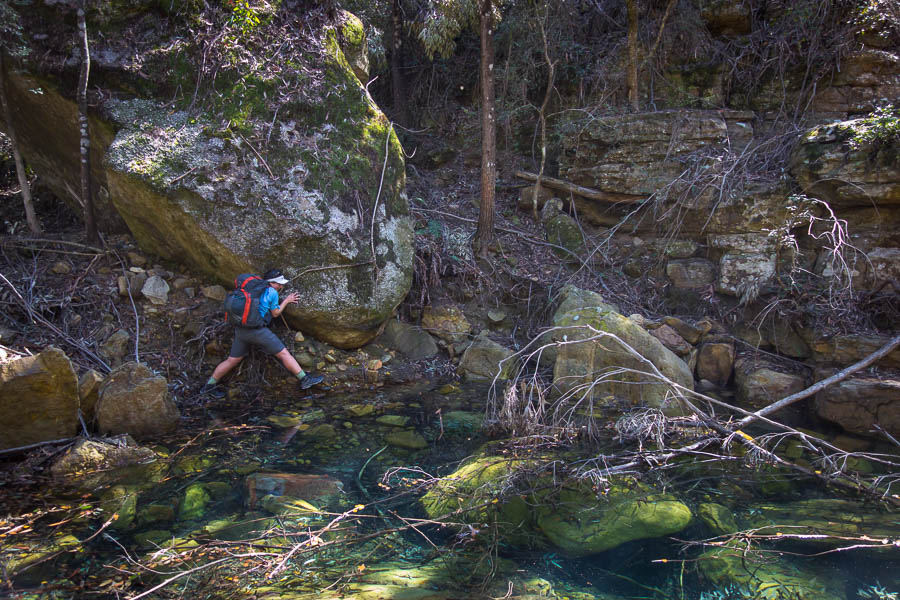 Lauren going for an ambitious route

There were plenty of beautiful pools and Onni even had a swim! 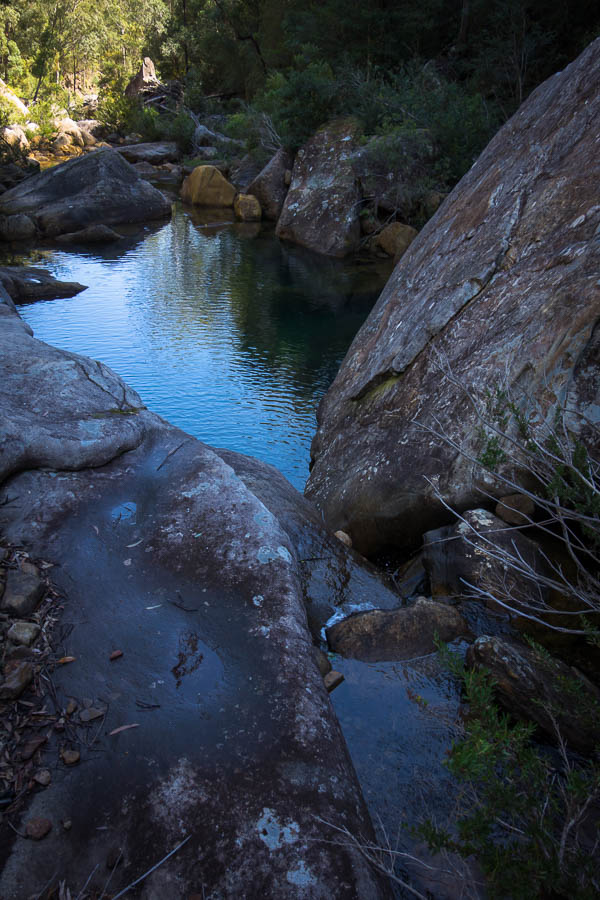 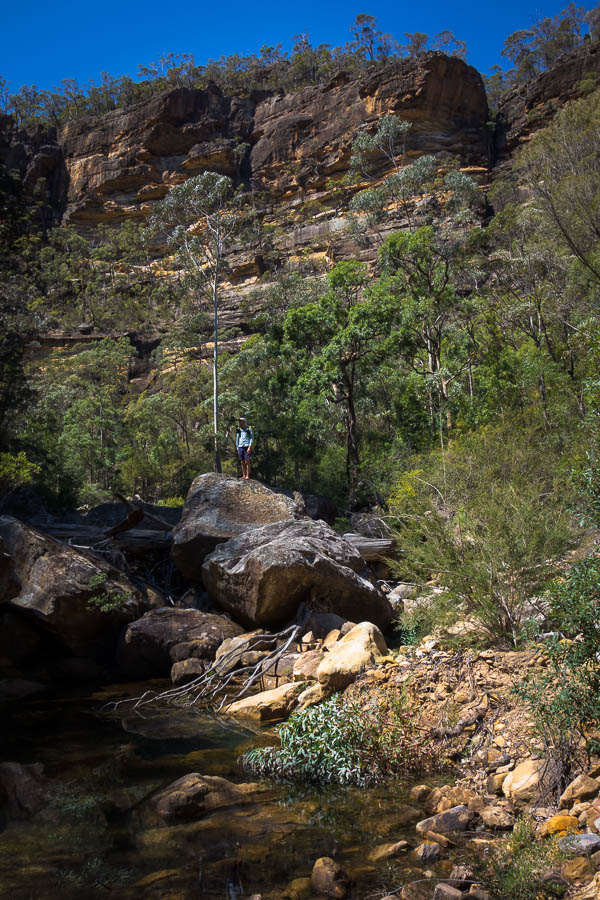 Onni on one of the many of the large boulders

The junction with Iron Creek seemed to take an age to get to. We had thought to have morning tea there but at 11am I decided we just needed to stop junction or not. 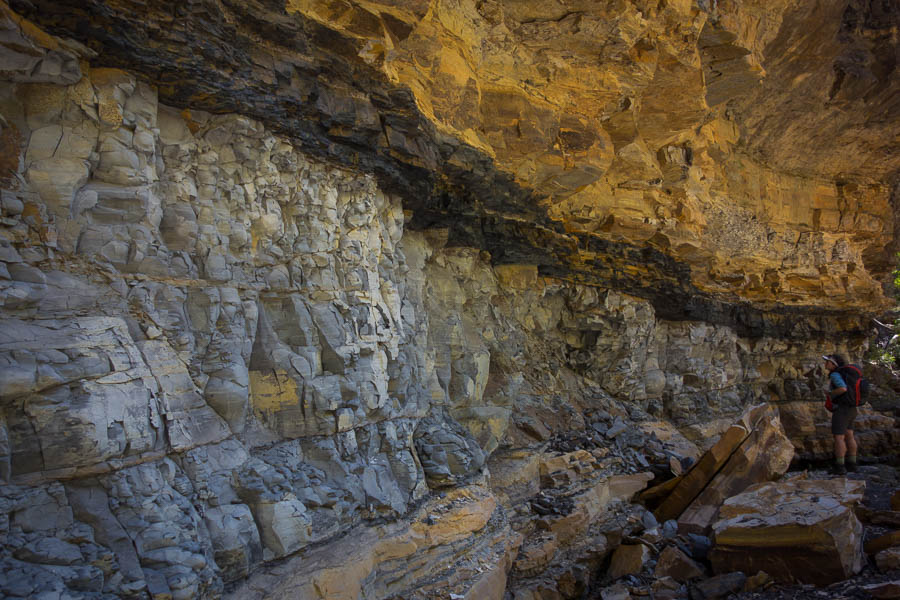 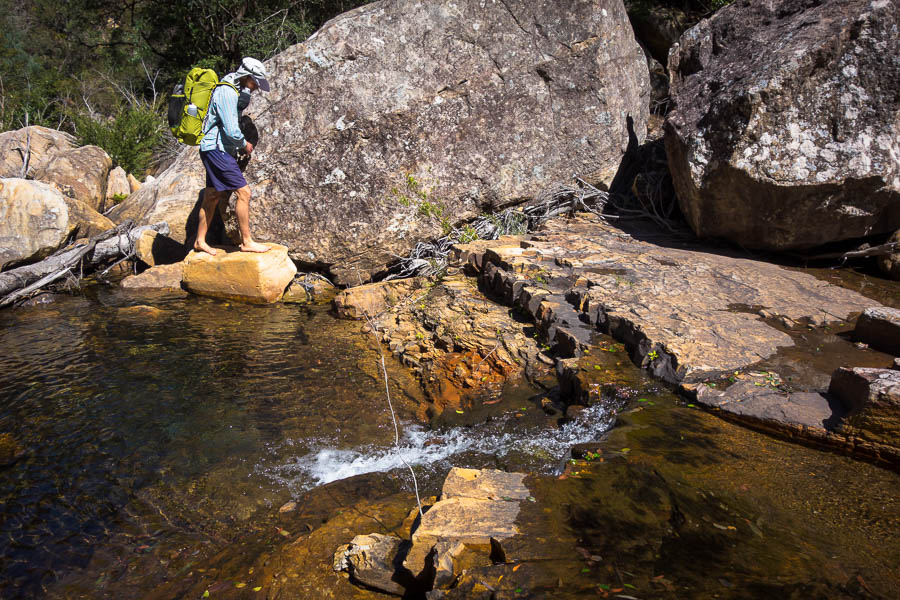 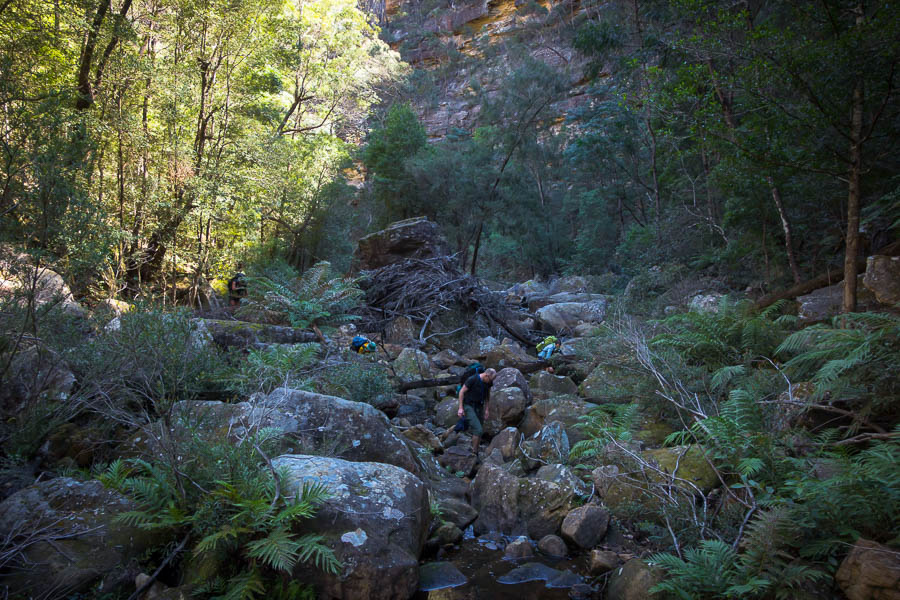 Choose your own adventure (and check out that flood debris!)

Eventually we made it to our exit side-creek and we had lunch. Tom recalled the route Alan had led us up last time and we were quickly through the exposed section. We bashed out to the ridge a bit earlier which brought us out near the end of the fire trail which saved a bit of time. Most of us headed out to the end of the ridge to Fingers Lookout. I discovered the logbook (well single A4 piece of paper in a jar) which I had missed on the earlier trip. 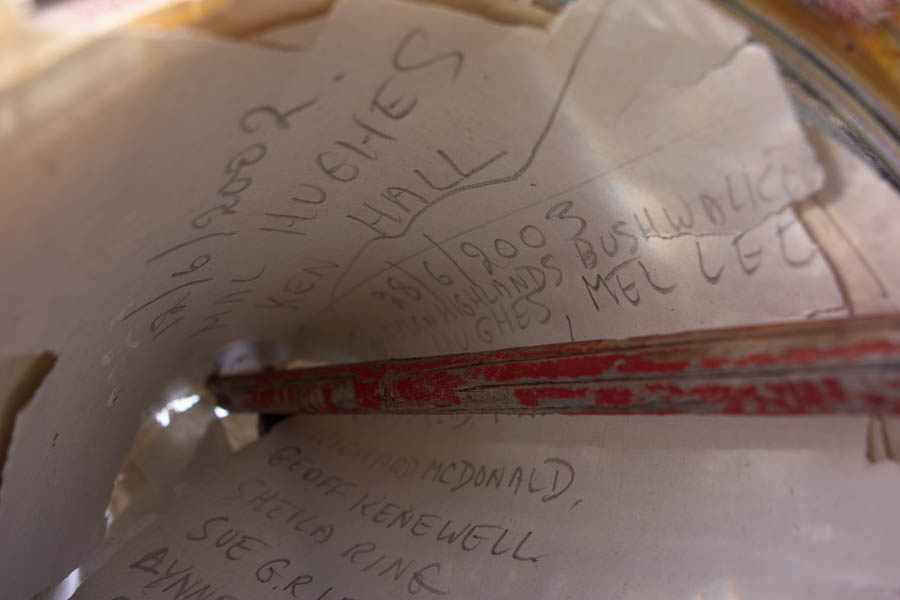 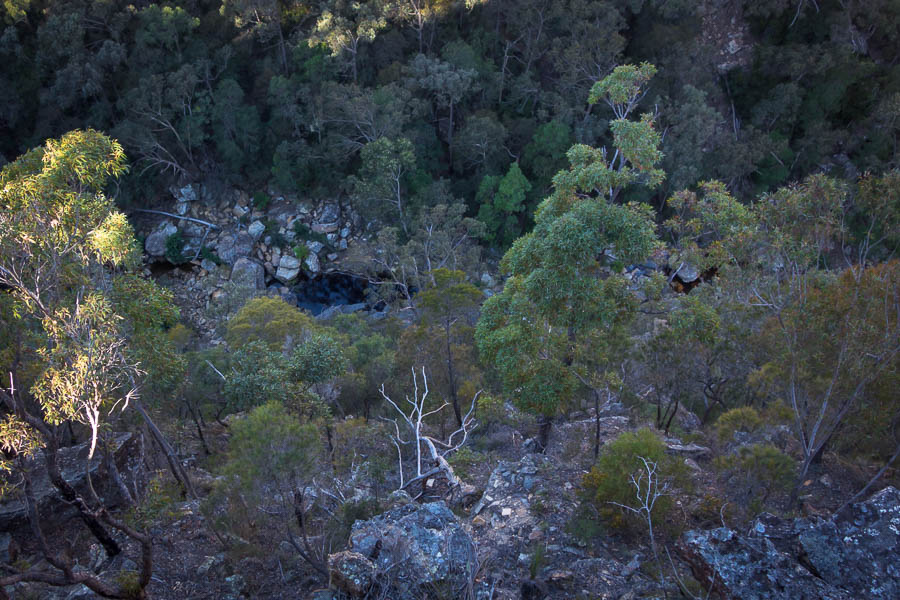 Looking down into Rocky Waterholes Creek from Fingers Lookout 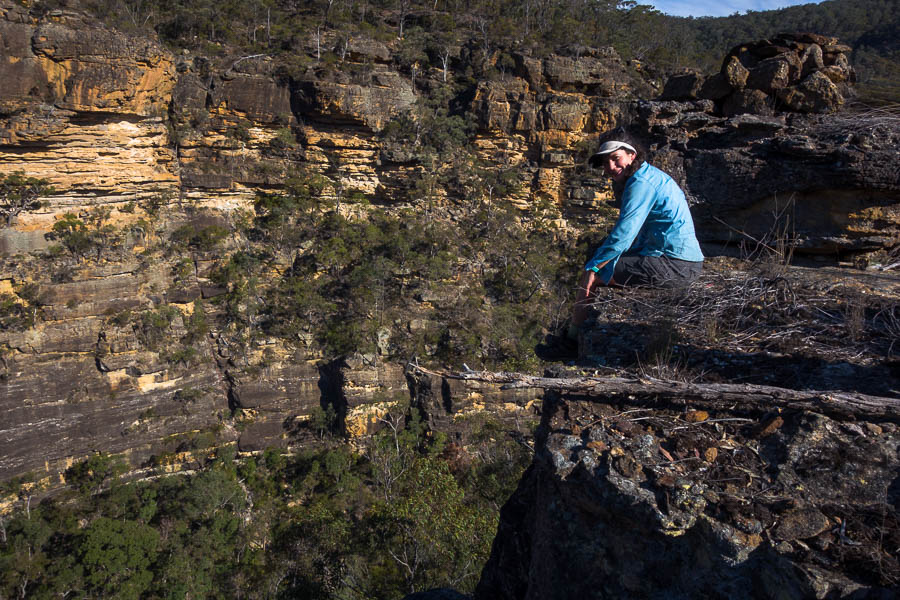 Lauren likes sitting near the edge it seems 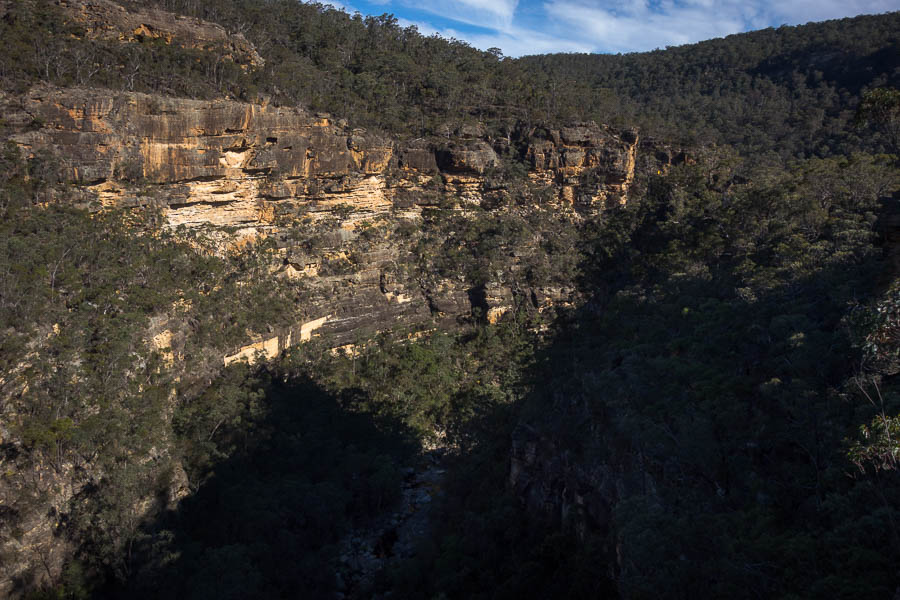 The yellow fleck in the distance is Tom at the lookout

From there it was just an hour or so back to the car, but probably the most painful of the trip despite it being technically the easiest! I think we were all feeling the full-on two days we’d had, in particular the full body workout in Rocky Waterholes Creek, and were glad to get back to the cars at 5:30pm. A great weekend with a great group.

The only surprise at that point was when Alex asked Tom & I if we were wearing our driving shirts. I had no idea what he was talking about until I came around the side of the car to find that Tom & I had packed the same shirts to change into. How embarrassing! 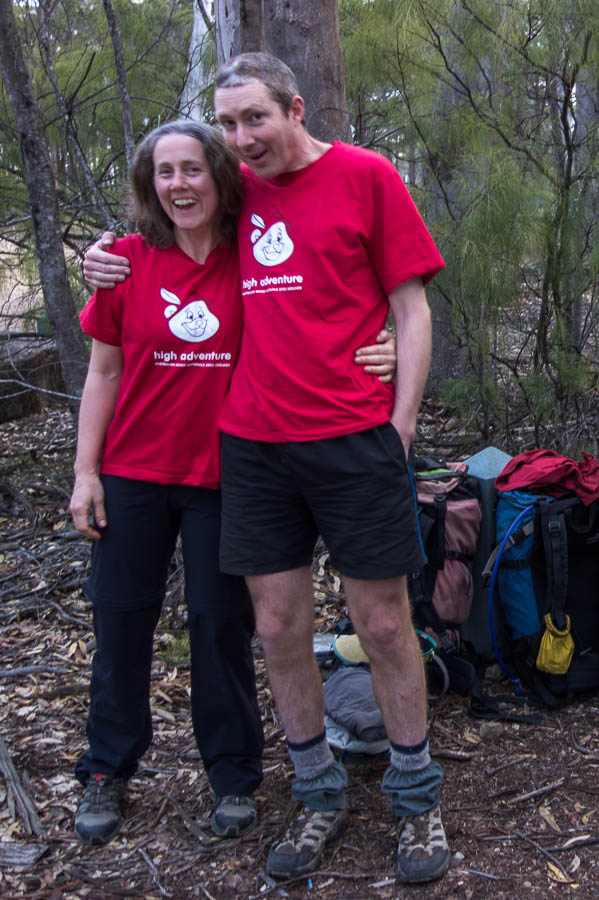