I wanted to put a trip on our bushwalking club’s program and I was searching for inspiration when I stumbled across Tom’s list of ‘future walks he’d like to do’. Russells Needle was on it and from there I had the seed for my trip planning. I’d read a couple of trip reports about sketchy ascents of Russells Needle but I figured it was an out and back so if things got beyond people’s comfort level they could just stop! Planning a route out Rocky Waterholes Creek seemed the obvious choice to avoid backtracking. I found a few more sketchy trip reports of people trying to go up Rocky Waterholes Creek so it seemed like a great adventurous option. And thus it went on the program – all pretty unknown.

In the two weeks leading up to my trip I received quite a bit of information regarding the ascent of Russells Needle and also exits out of Rocky Waterholes Creek. While it is great to have information suddenly it didn’t seem like so much of an adventure!

Saturday morning arrived and 7 of us set out from the Wattle Ridge Carpark. With another bushwalking group also setting out at the same time we had to use overflow parking spaces. The weather was beautiful for walking and it wasn’t long before we were dropping packs at the track junction with Slott Way and the Ahearn Lookout track. We took the opportunity for a side trip to Ahearn Lookout so everyone could get expansive views of the Nattai Valley, and particularly our target for the day – Russells Needle. Russells Needle is an unusual sandstone spine which sticks out into the Nattai Valley, a knife-edge ridge separated from the main cliffline by a deep saddle. 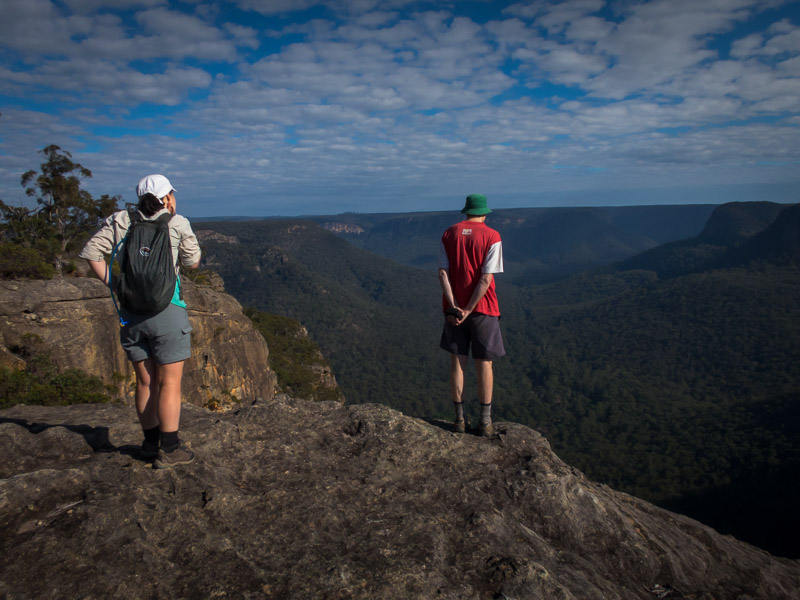 Tom & Jo looking out over the Nattai Valley 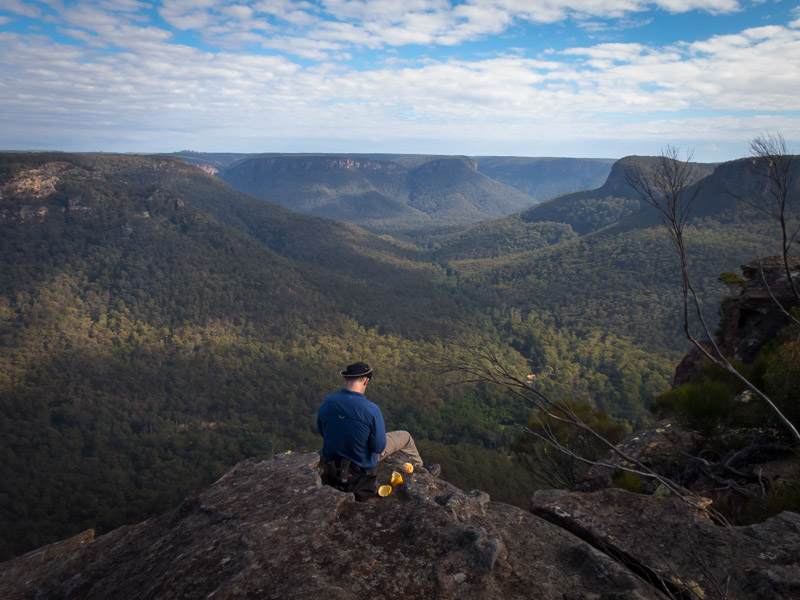 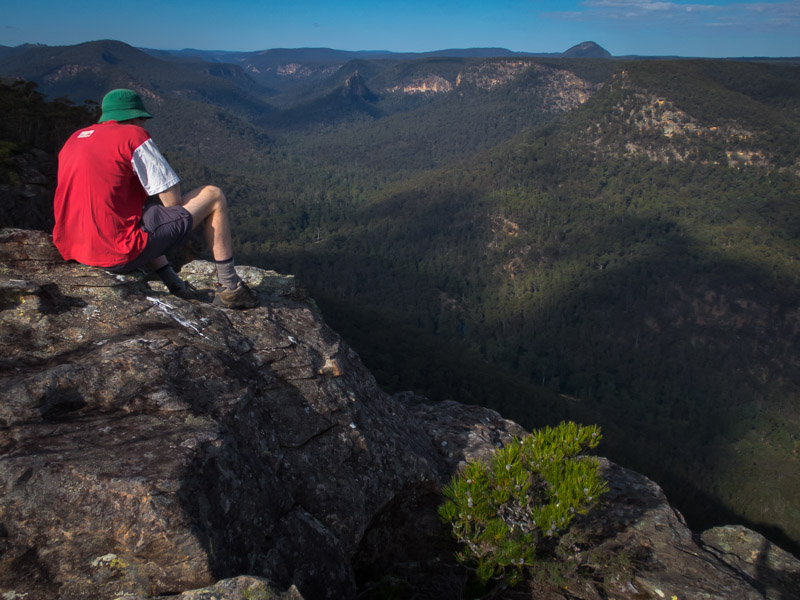 Back to our packs we made quick time down Slott Way which was (too?) well marked with pink/yellow tape and blue metal markers on what felt like every second tree. 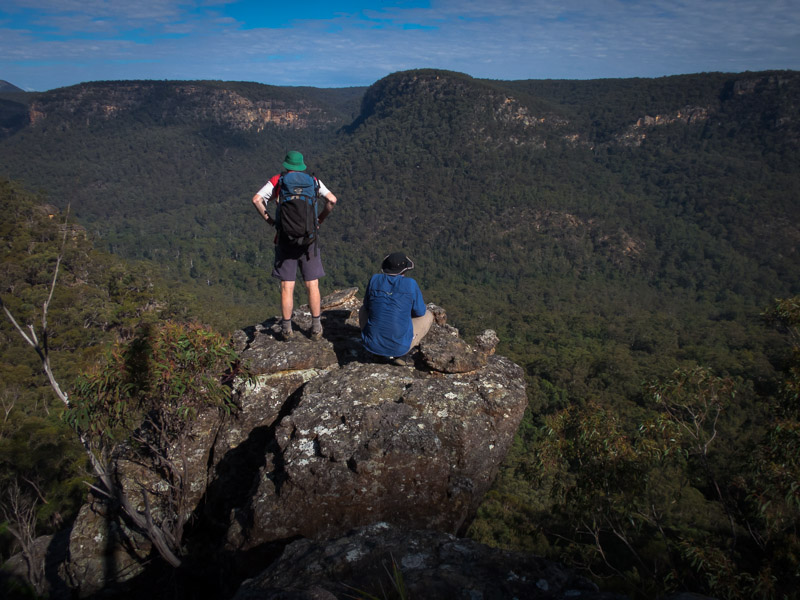 Tom & Matthew at a lookout half way down Slott Way

The Nattai is still fairly easy going after the floods which scoured it out in mid-2016. Lunch and our campsite was a large sandy bank on the Nattai not far downstream from Needle Creek. After lunch we set off with day packs to ascend Russells Needle. Prickly bushes (blackthorn?) made the initial slopes unpleasant and of course the group were constantly advising the leader that ‘the ridge over there looks nice and clear’ (they were ignored). Once we’d broken through that we were soon skirting the upper cliff line. It took a while to reach a break in the cliffline, which looked easy, though turned out to be a little less so. The rope was deployed for those that wanted it. This brought us on to the knife-edge ridge. 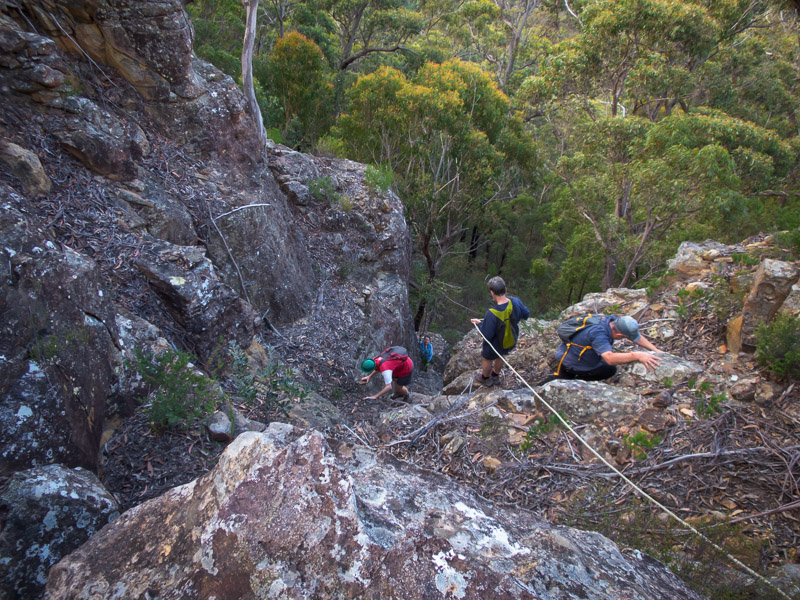 Gaining the spine of the ridge to Russells Needle 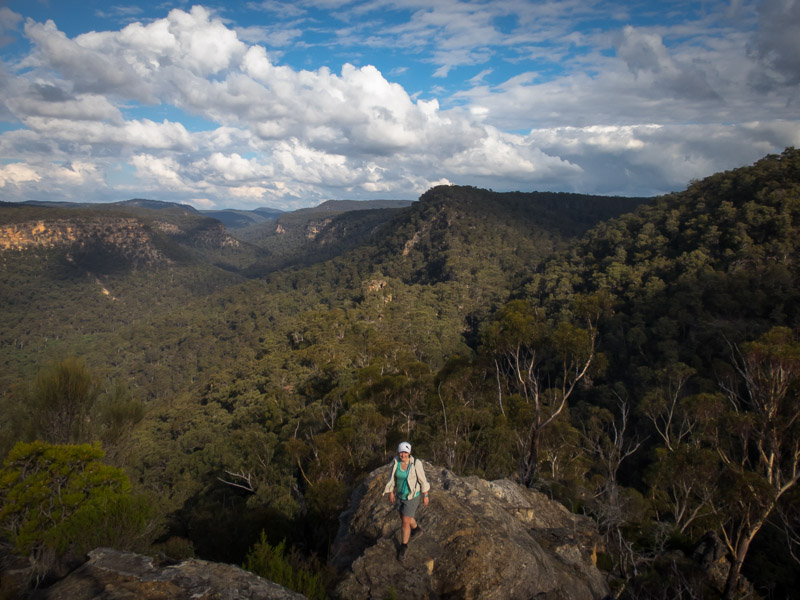 Jo on her way up with spectacular views up the valley

Now we were almost at the real deal – we picked our way up the rocky spine until we got just below the summit. Soon the majority of the party were standing on the summit plateau. 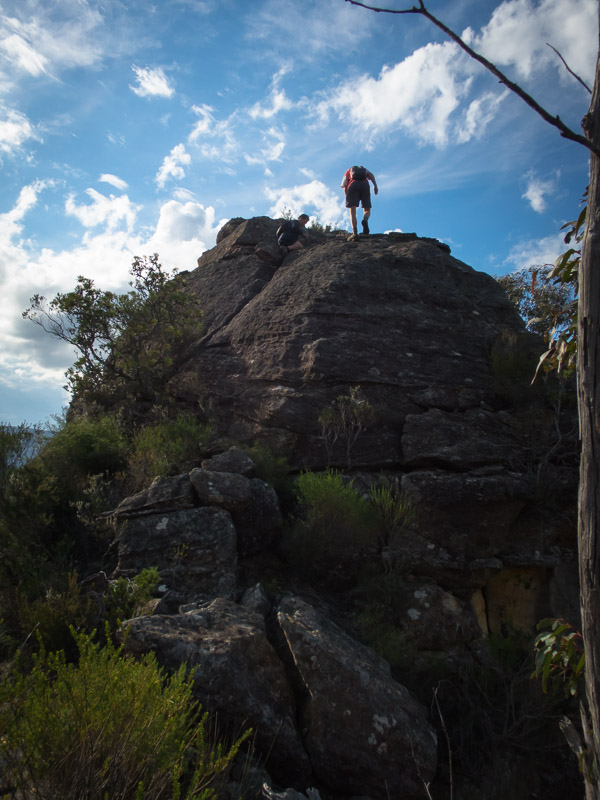 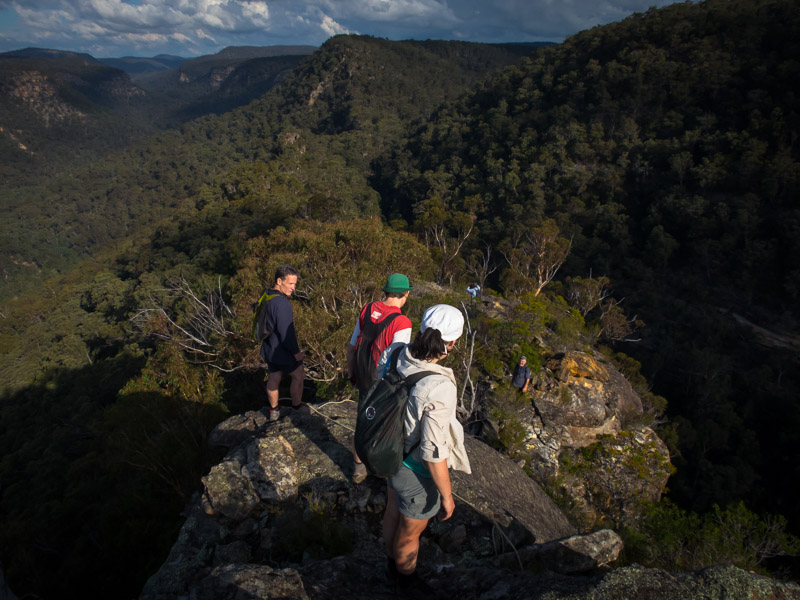 Some were more comfortable with the considerable exposure – Matthew lounged on the true summit rock for quite some time. After a decent period taking in the views and giving everyone who wanted to the opportunity to get to the true summit we started heading down. It was only then that I discovered the easy (unexposed) route up to the summit rather than the more exposed route we’d taken up the boulder. 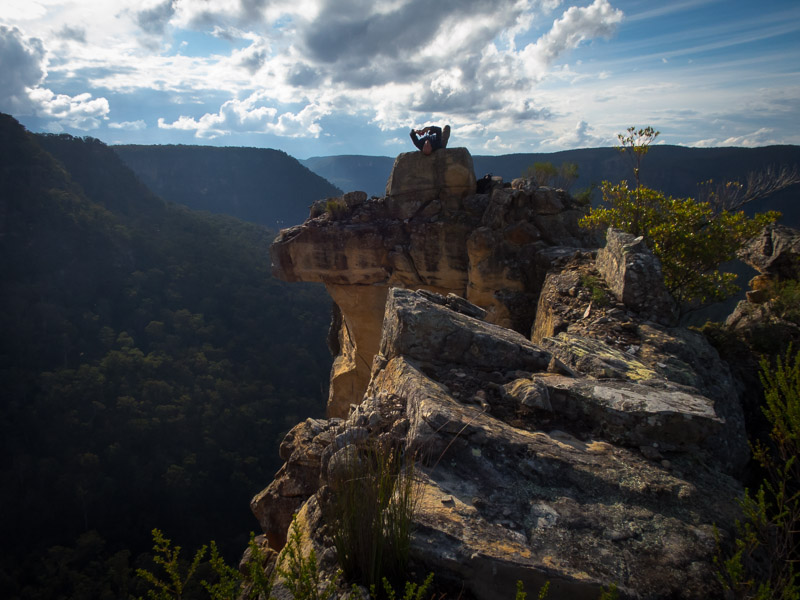 Matthew absolutely fine with the exposure on the true summit! 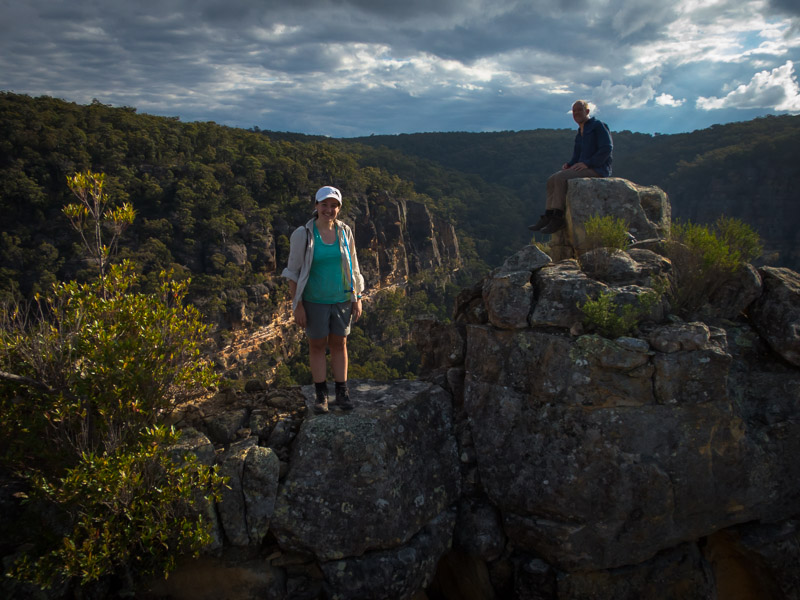 Jo & Matthew on the true summit 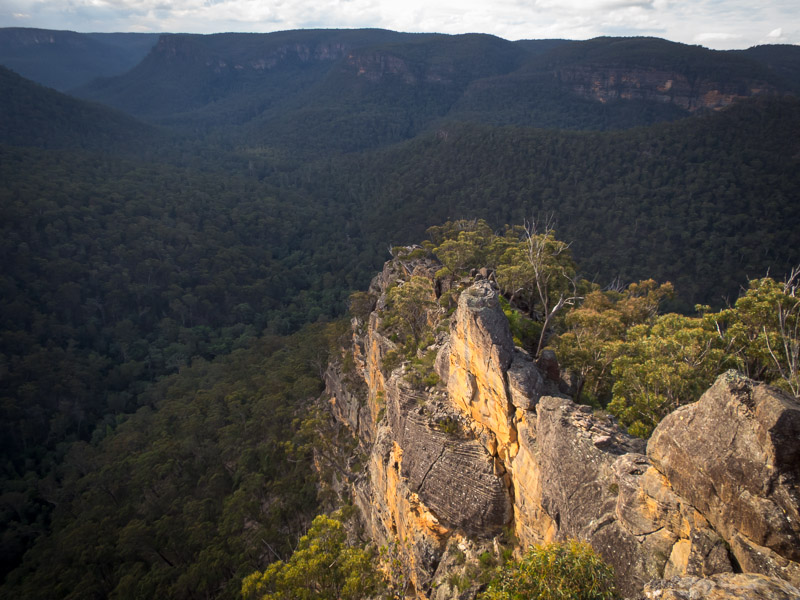 Looking down the northern spine of the needle 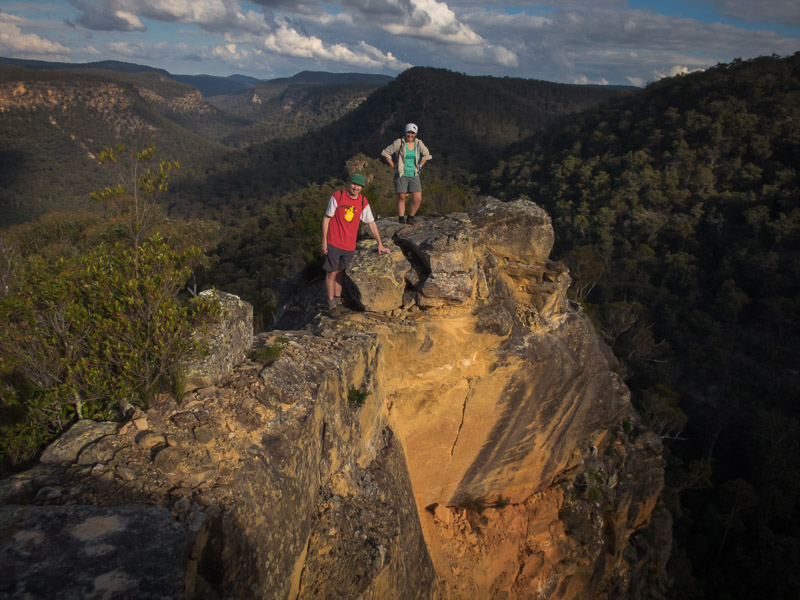 Looking back to Tom & Jo from the summit 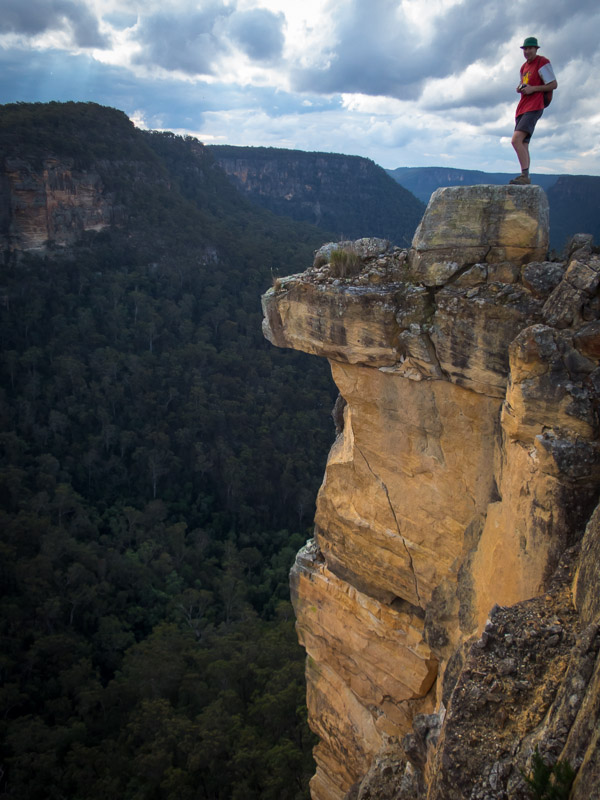 Tom on the true summit

On the descent we took the ‘clear ridge’ that everyone wanted to be on during the ascent. I’m pleased to report it was just as full of blackthorn… Back to camp around 4:30pm, after picking up water from Needle Creek, we settled in for a pleasant happy hour and evening around the camp fire. 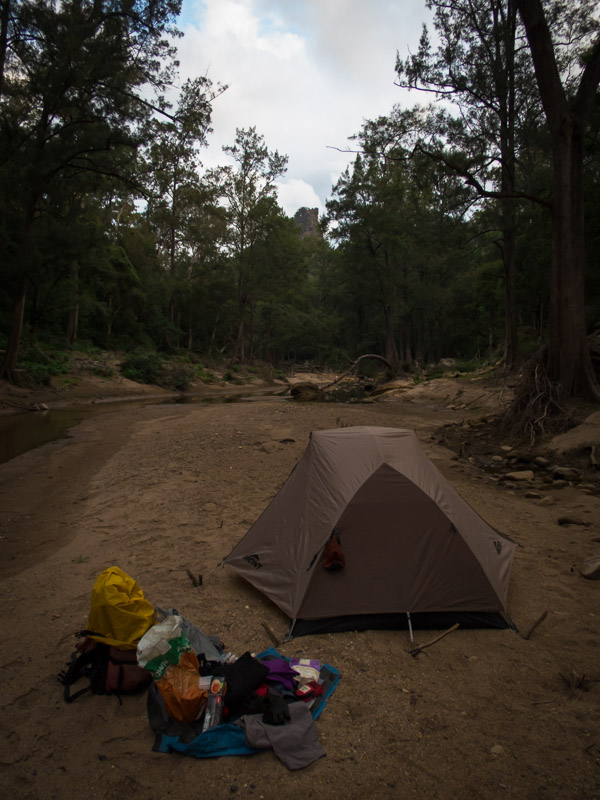 Our campsite complete with views of the Needle!

Sunday always had the most unknowns – not least what the weather was going to do. The forecast during the week had oscillated between 0-3mm to 5-10mm almost daily. The most recent forecast was fortunately back to 0-3mm and Sunday dawned clear which was a good sign.

Away from camp at 8:30am we walked down the Nattai a few hundred metres before crossing over to Rocky Waterholes Creek. 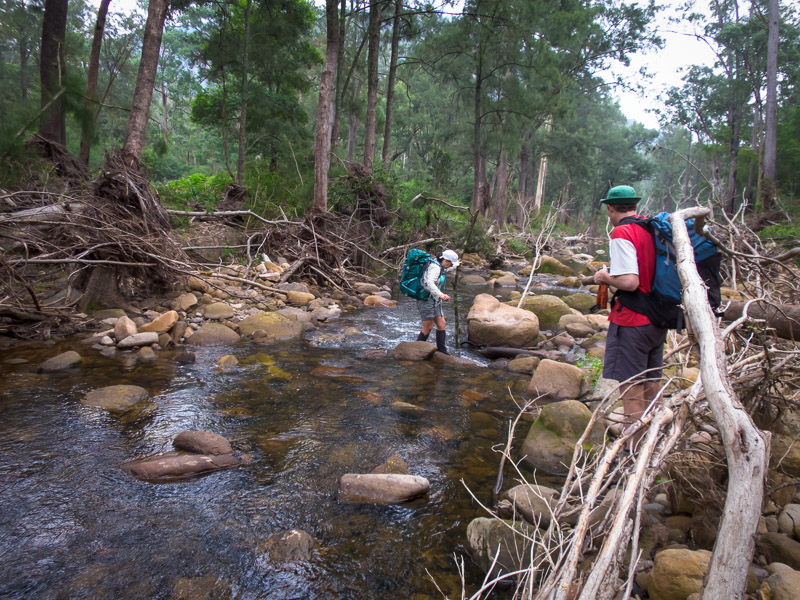 Similar to the Nattai there was significant flooding impact so the going was reasonable – as reasonable as it can be when you’re boulder hopping and scrambling. The creek varied between large boulders which were a full body work out to get around, flatter sections with beautiful pools (though only Matthew was keen to swim!), and some delightful cascades over rocky slabs. The clouds started building but other than a few drops at lunch we were spared, which was fortunate as some sections of the creek were slippery enough without extra moisture from above. 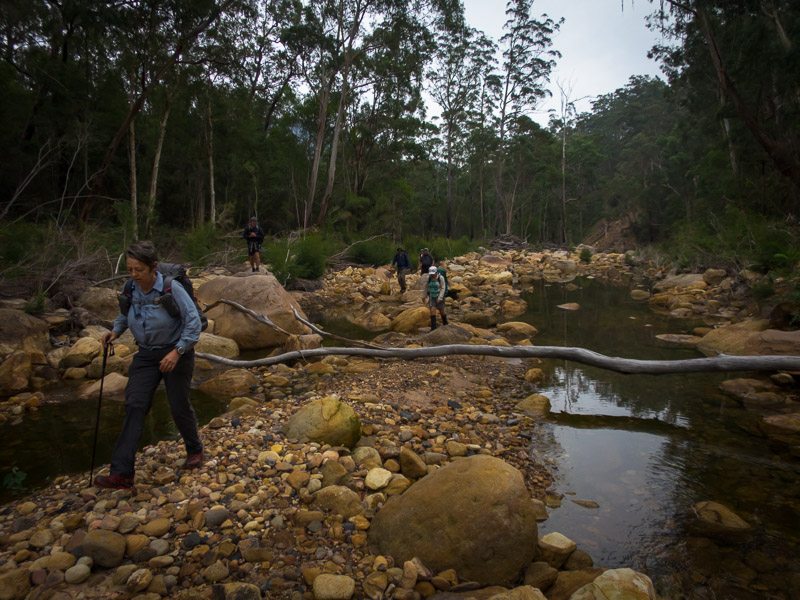 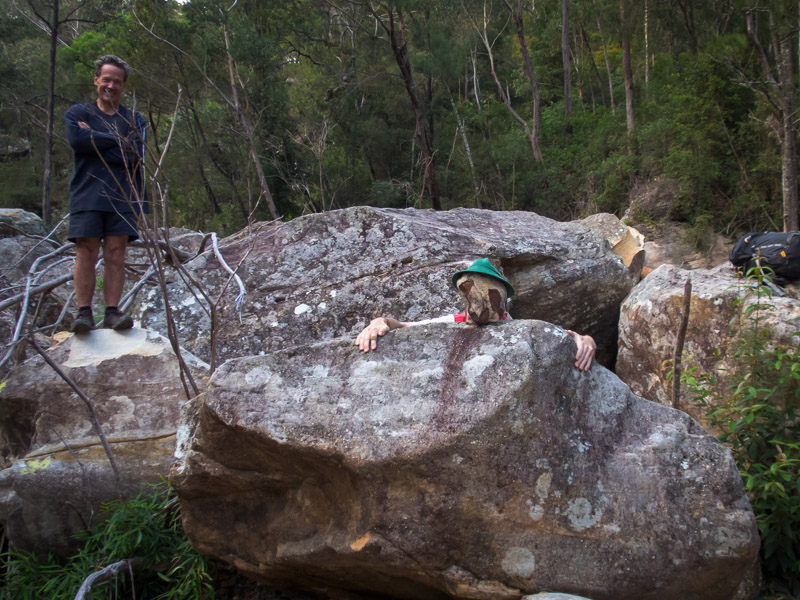 Mucking around with an unusual rock we found 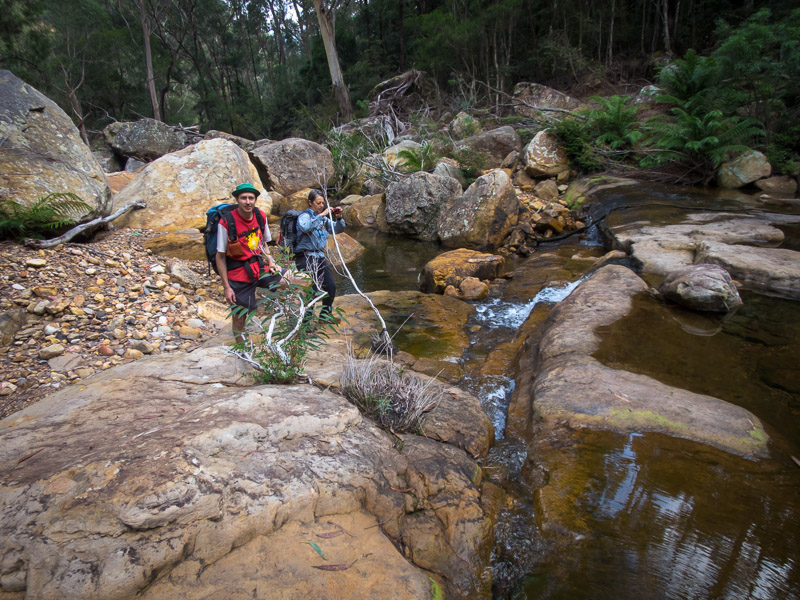 Tom & Melinda in a very pretty section of creek 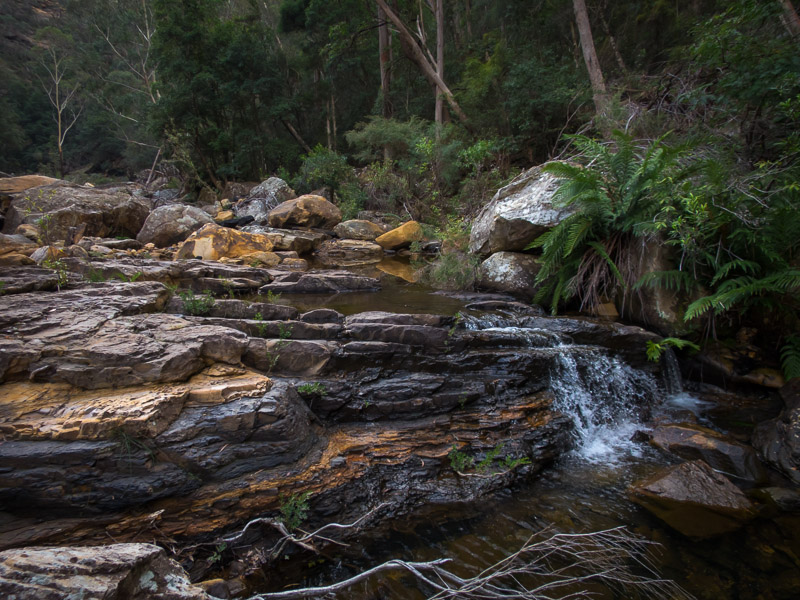 Near the junction with Iron Creek there was a shale (?) band of rock which made for some interesting colours 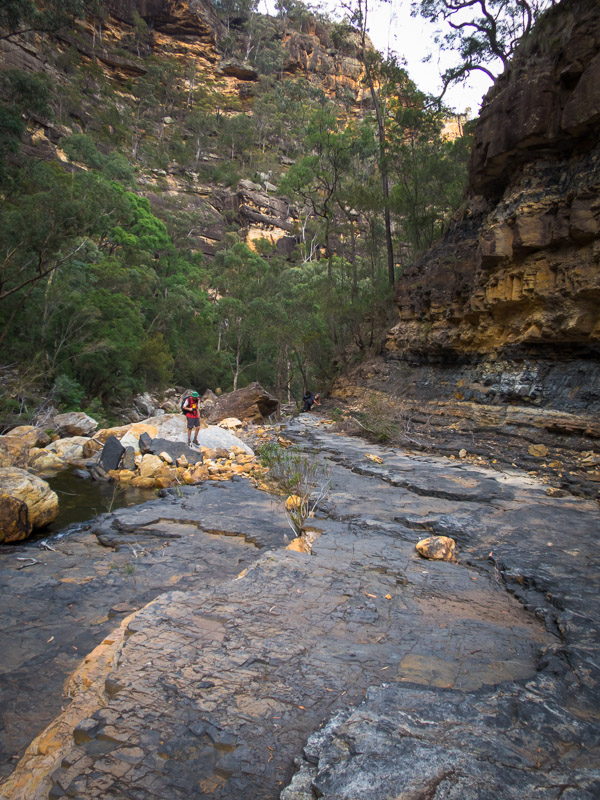 Tom & Glenn near the junction with Iron Creek 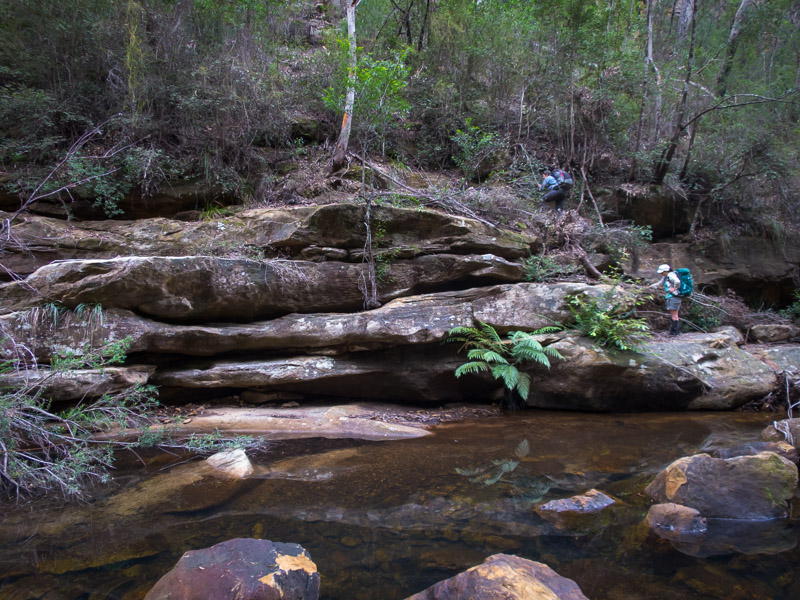 Melinda and Jo making their way up Rocky Waterholes Creek 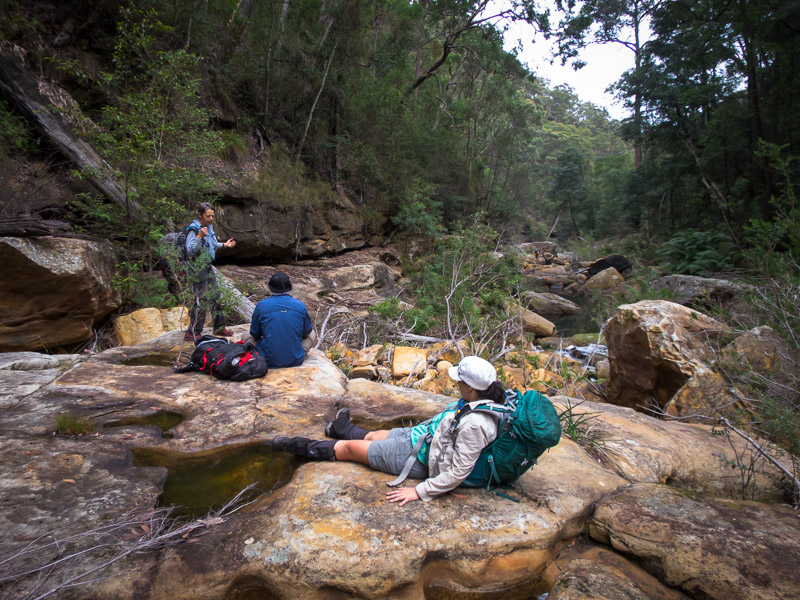 Shortly after lunch we hit the side creek at 625986 that we hoped to ascend. Alan had kindly scouted it for us during lunch and was able to confirm we could get up. I’m always a bit concerned about whether Alan’s routes will work for the whole party but he assured me he did it with his “Melinda hat” on. We scrambled up the true-left of the creek around a number of waterfalls and then bashed up from the true right to one of the many fire-trails that exist on the ridges in the area. 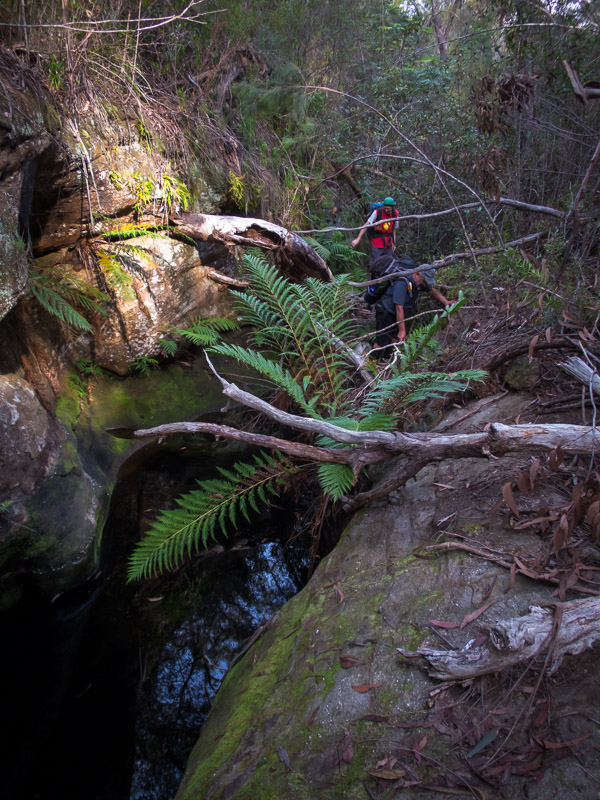 Glenn & Tom making their way up the canyoniferous side creek 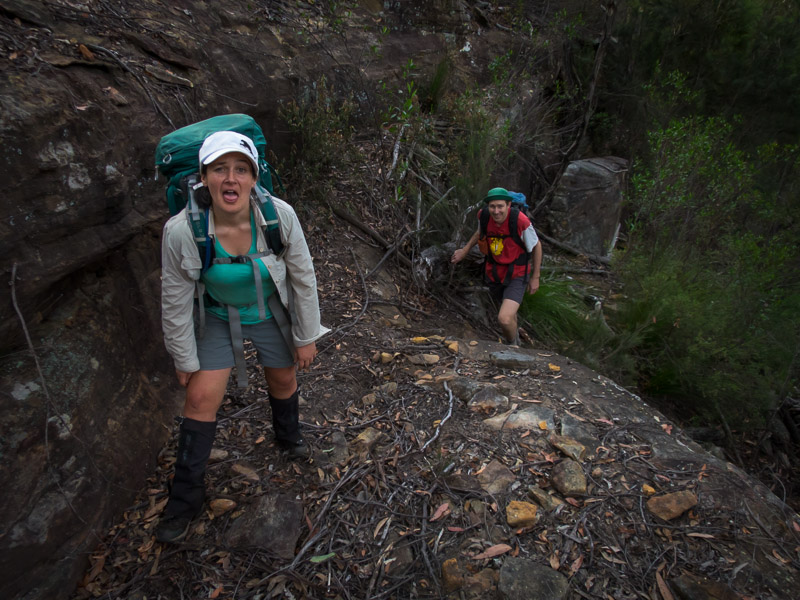 Those that were keen headed down the firetrail to the skinny ridge which pokes out into Rocky Waterholes Creek, giving spectacular views of where we’d spent most of the day. 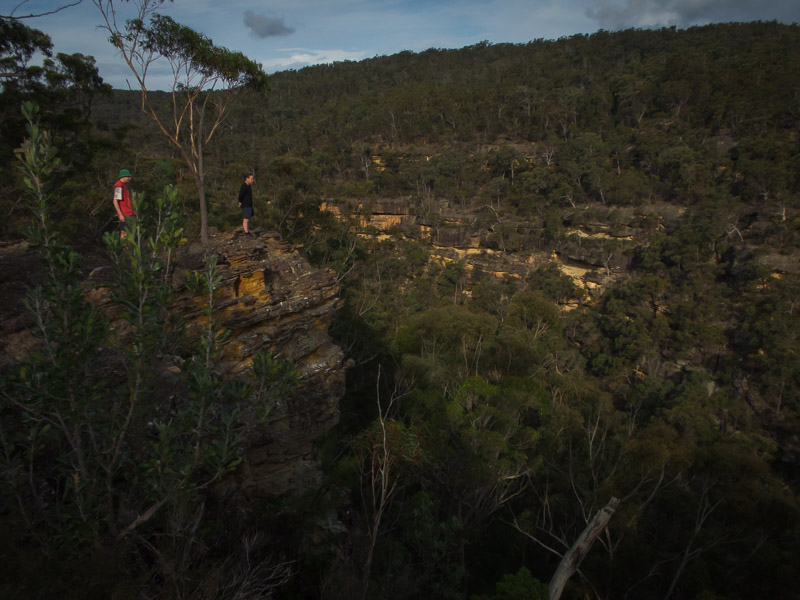 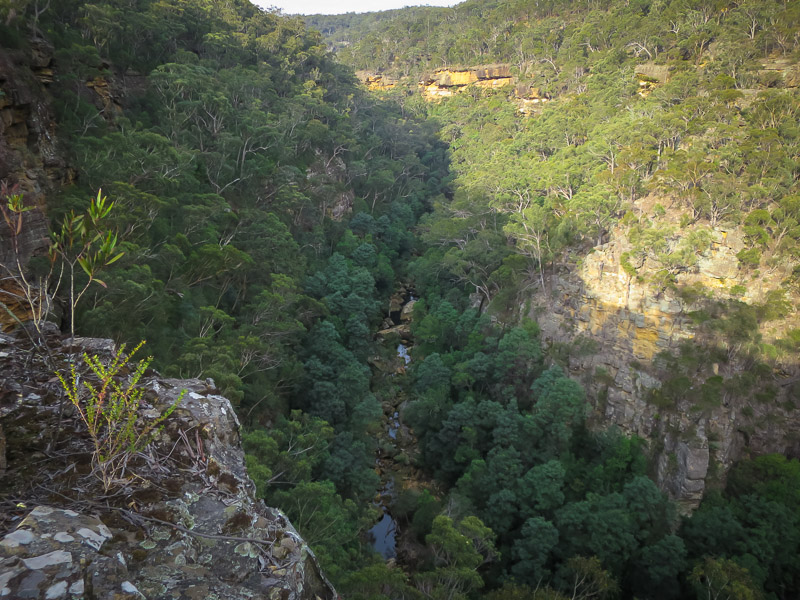 Lunch was somewhere down there 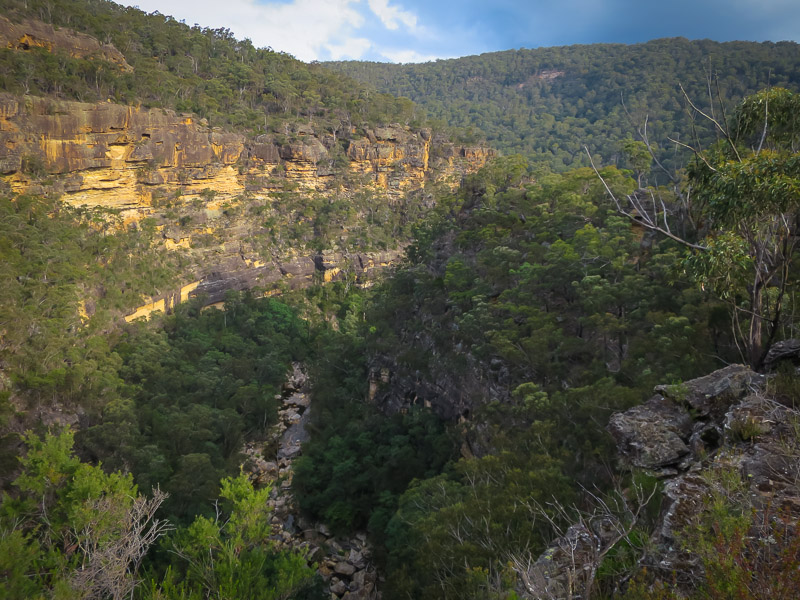 If you look very carefully you might be able to see Tom’s red shirt out on the point of the ridge on the right. An interesting finger which extends out into the creek.

From there it was just an easy walk following firetrails and a track skirting the Wattle Ridge property. We arrived back at the cars at 4:30pm – no sign of an epic! An excellent weekend of adventuring in a lesser visited part of the world.