With the combination of an injury and work deadlines it had been 6 weeks since I’d been out in the bush and boy did I need to get out. All 3 of us were nursing foot injuries so this was meant to be a chance to get out and enjoy being in the bush without being too strenuous. So of course we started our long weekend loaded up with several litres of water, ropes, harnesses and at the last minute my down jacket also made it’s way into the pack (another 800g I really didn’t need to be carrying). 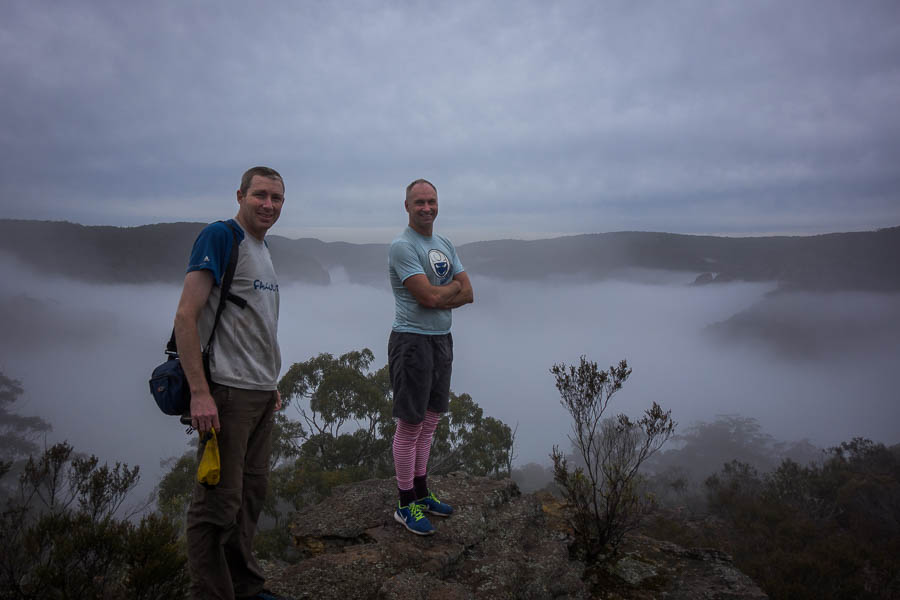 Tom and Jonathan above the cloud (and in it at times)

Tom’s SLR soon got some action, to justify the weight, with lots of low lying cloud about. 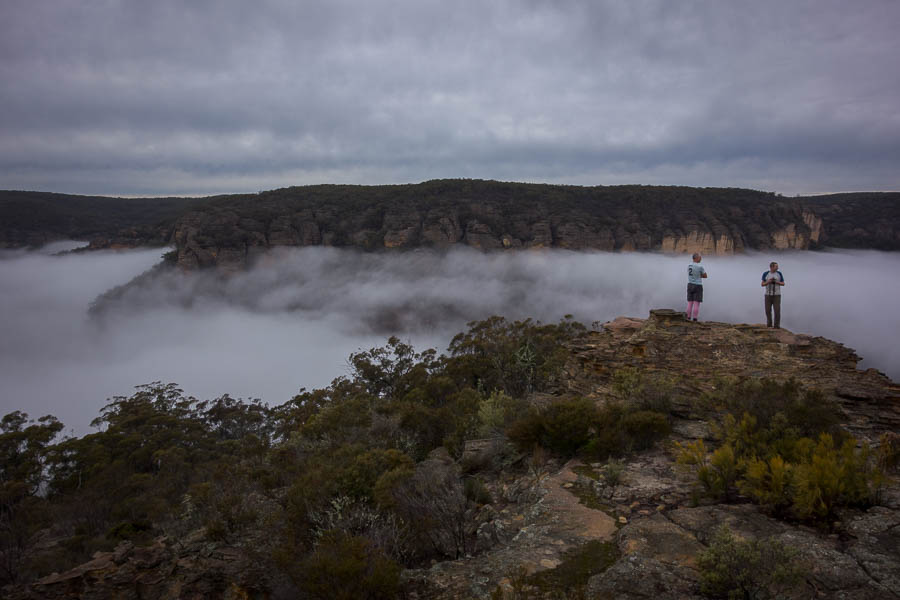 Tom and Jonathan with the river of cloud 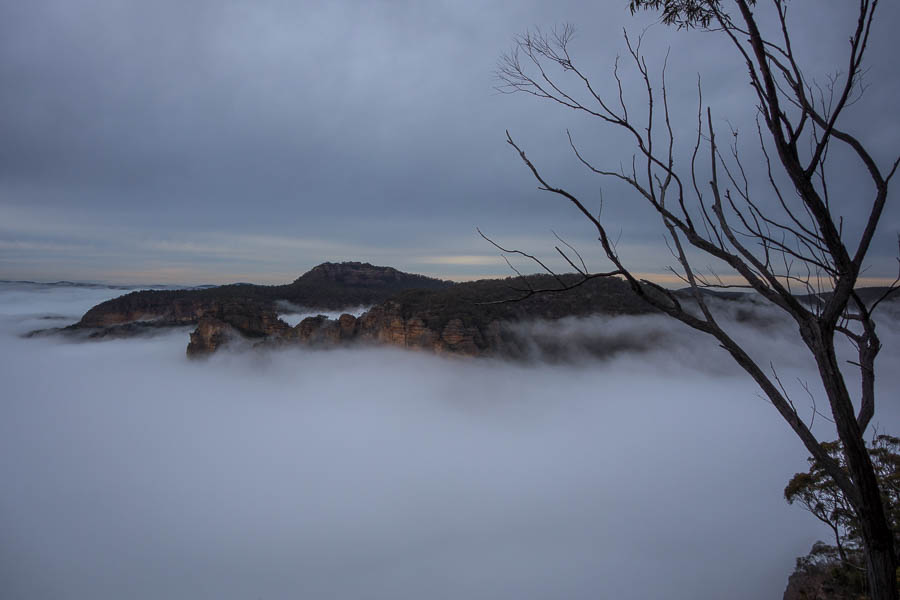 Eventually we made it to the spot we planned to base camp and had lunch. The cloud continued to envelop us from time to time and it wasn’t conducive to sitting around. That said, it was still after 1:30pm when we set off to do our canyon. “How long will it take?” asks Jonathan. “A few hours”. Ok, well we have 3.5 hours till sunset…. 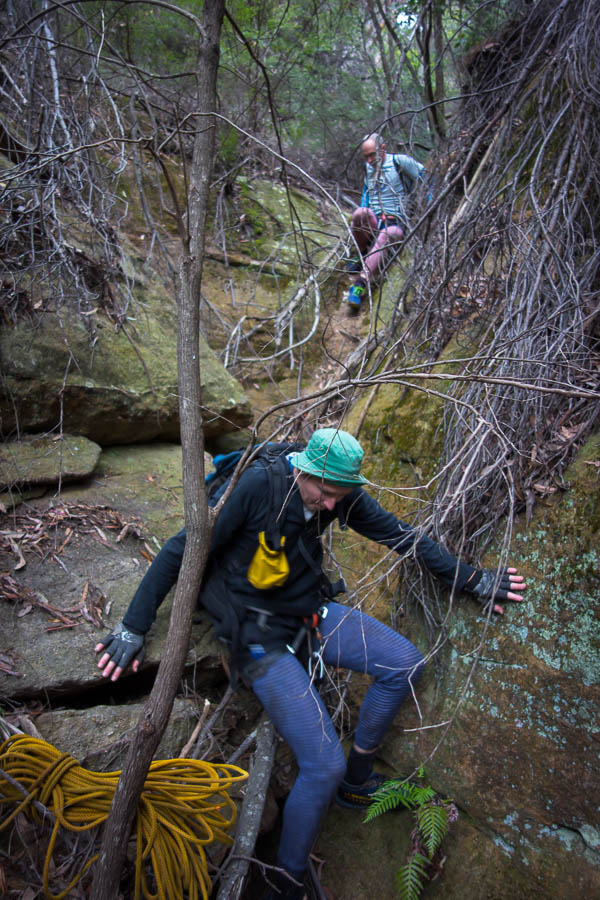 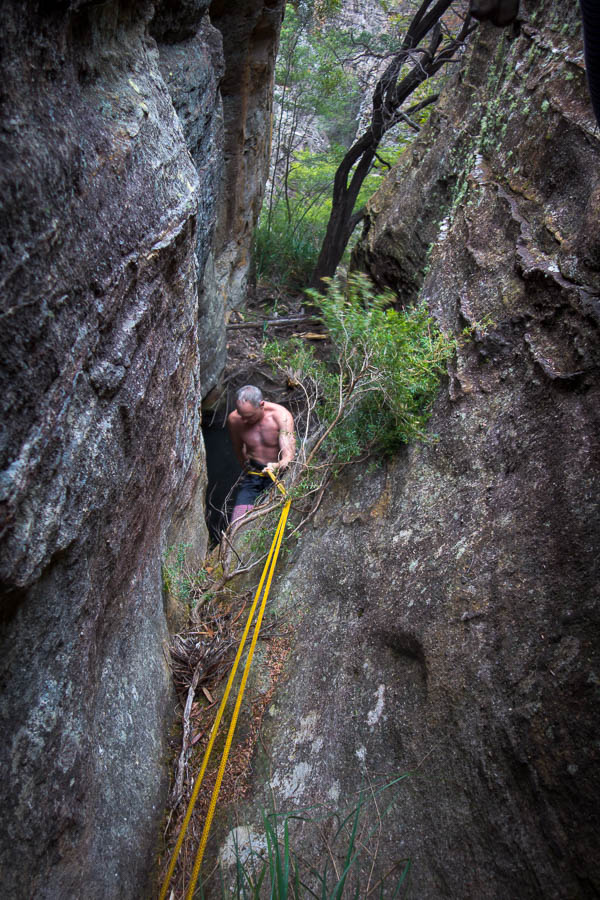 This is meant to be dry canyoning! (As Jonathan bravely abseils into a pool of unknown depth) 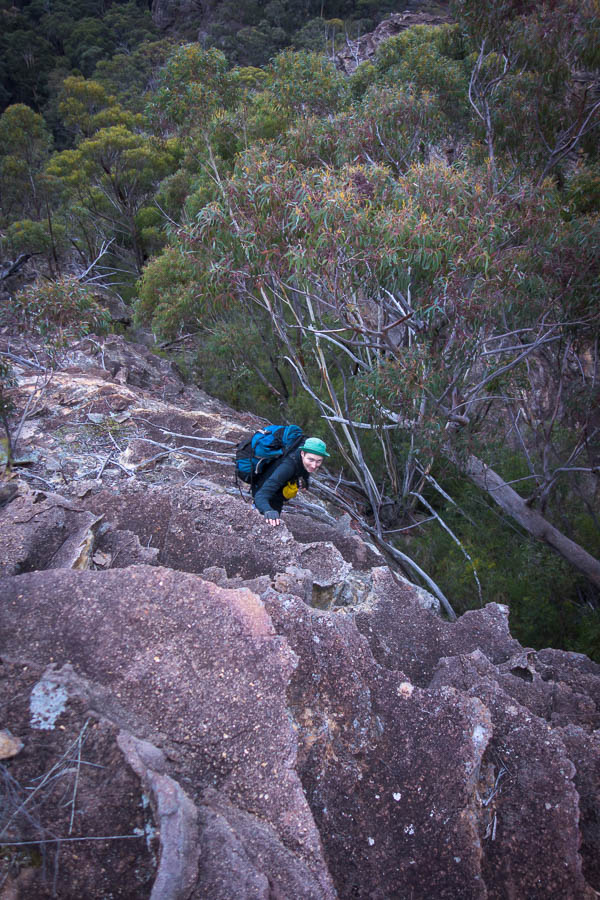 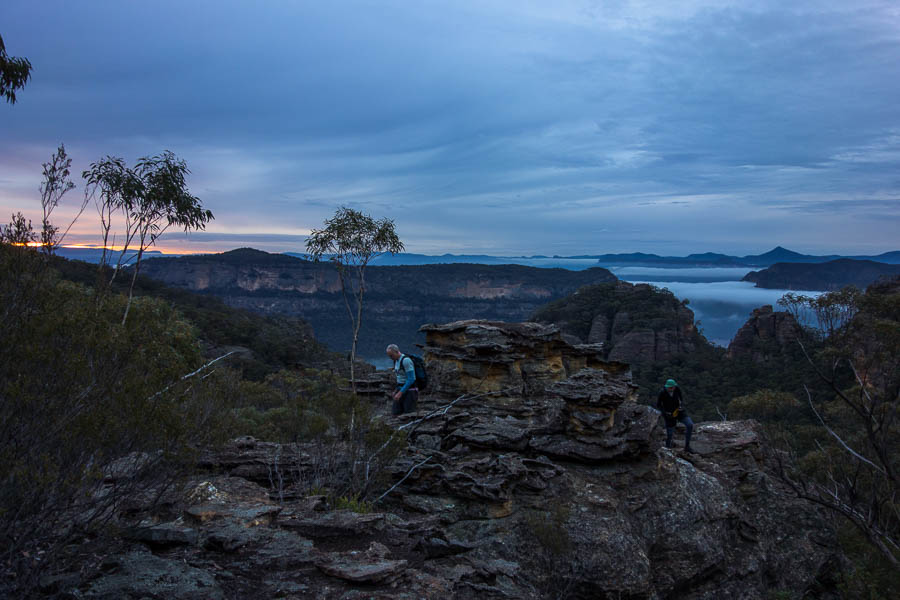 The cloud still about as the sunsets

We stumbled into camp well after dark, fortunately no one going over a cliff edge in the dark. Despite our 5am wake-up and a solid day of activity we didn’t go to bed till after 10pm. I slept like a log. Tom was up early to photograph sunrise but I enjoyed a sleep in. We knew we had the luxury of more time today, but also a longer canyon. I suggested we should get going and save any relaxing for when we got back to camp (hopefully in the light) later in the day. Even so we weren’t away much before 10am. 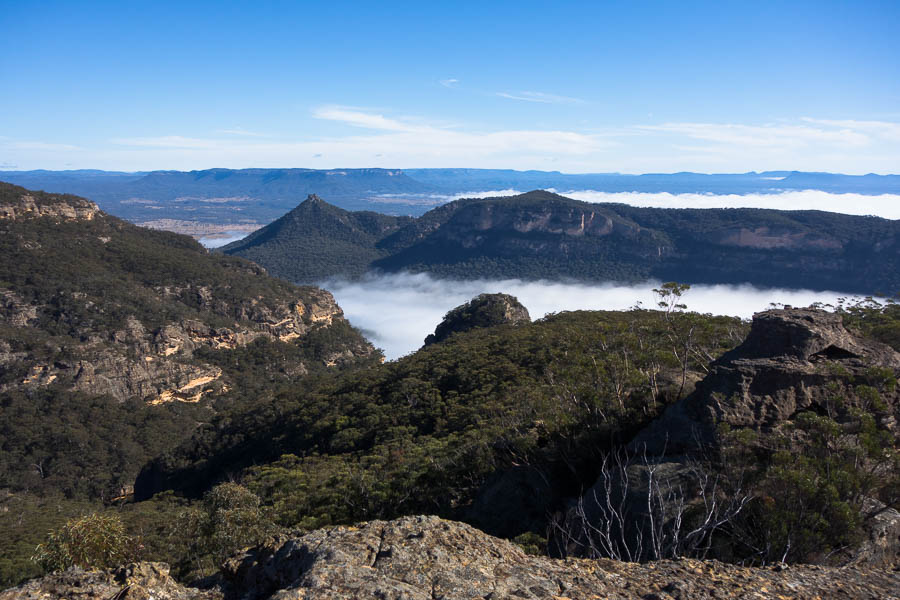 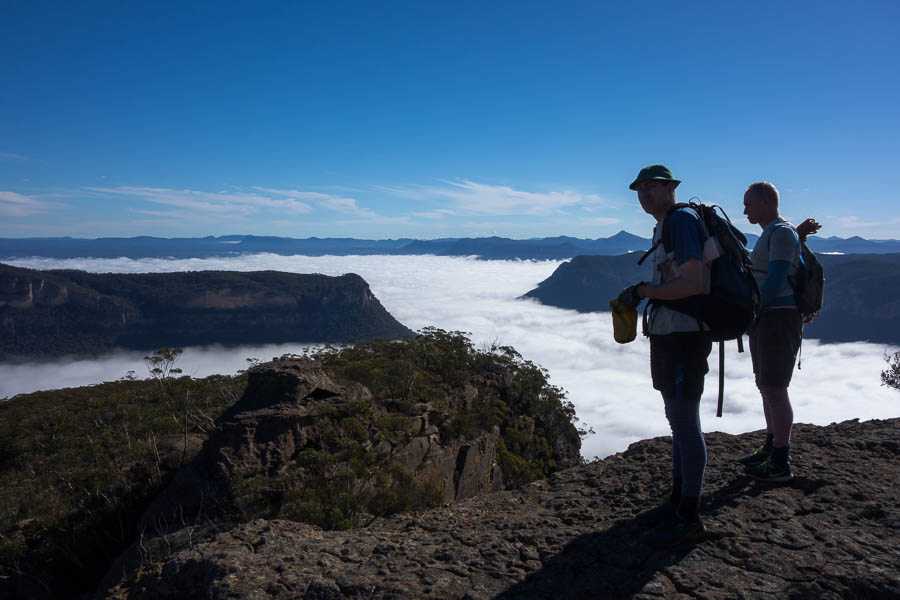 Tom and Jonathan checking out another river of cloud 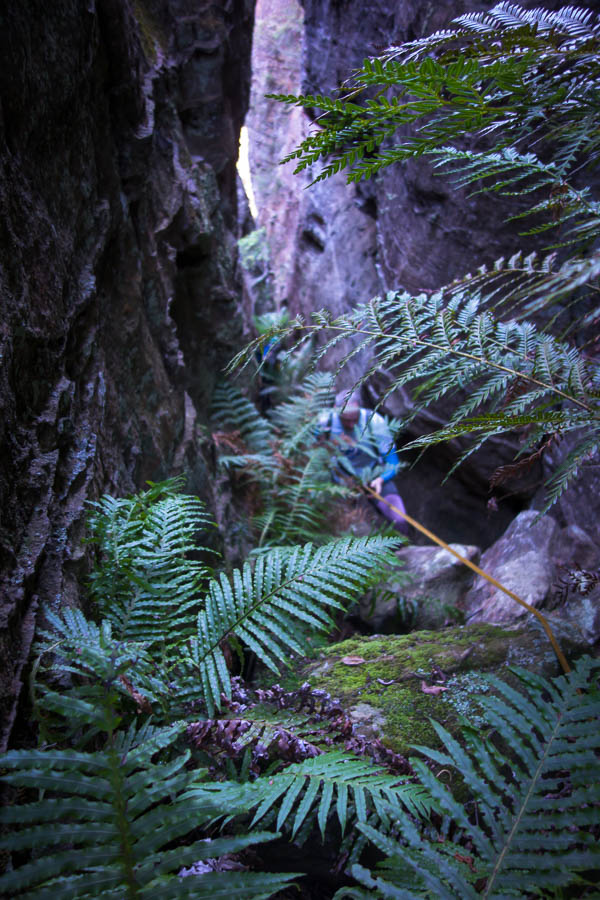 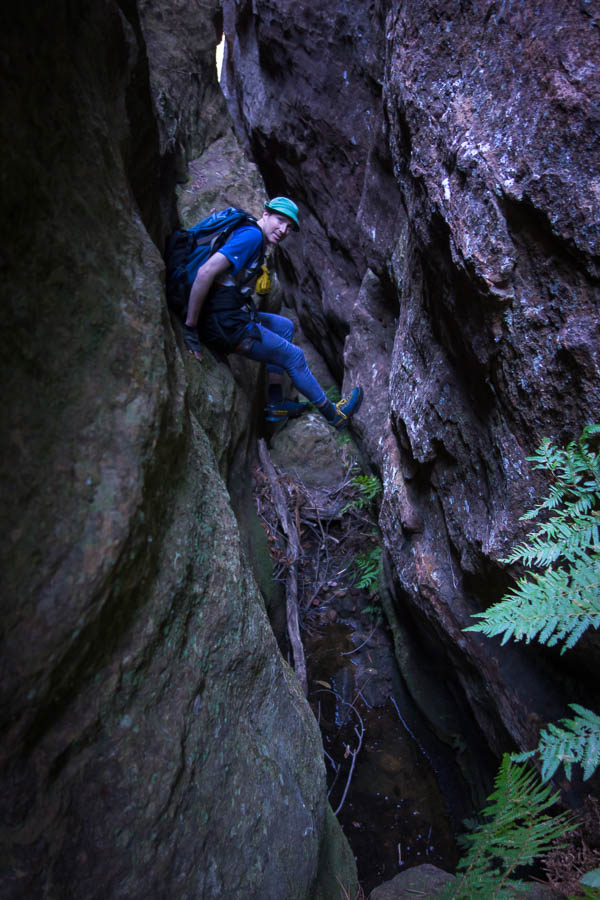 The man in nature

Despite both Tom & I having done this canyon previously there were many abseils, some awkward, some requiring particular care with rope placement, others needing to be doubled-up, so we didn’t make any speed records getting through the canyon. 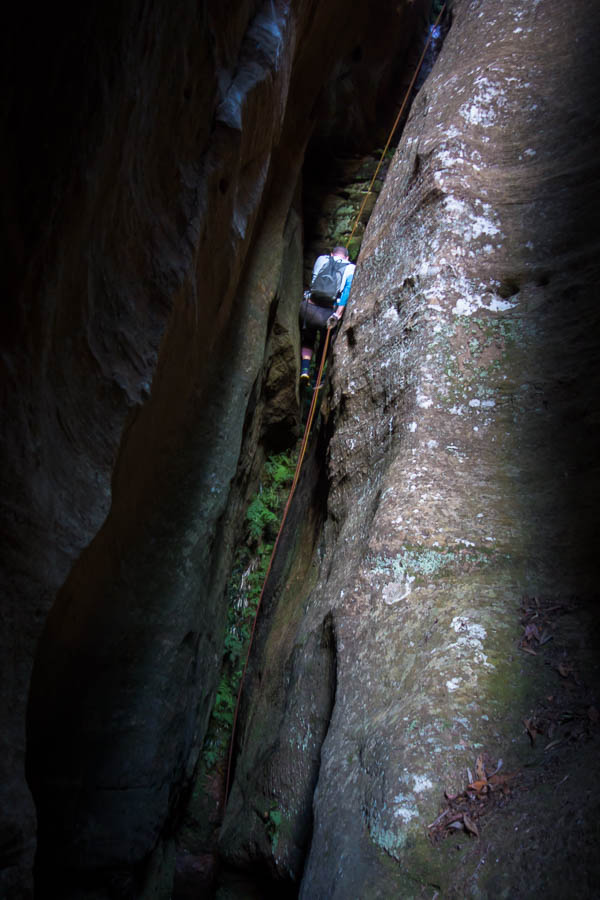 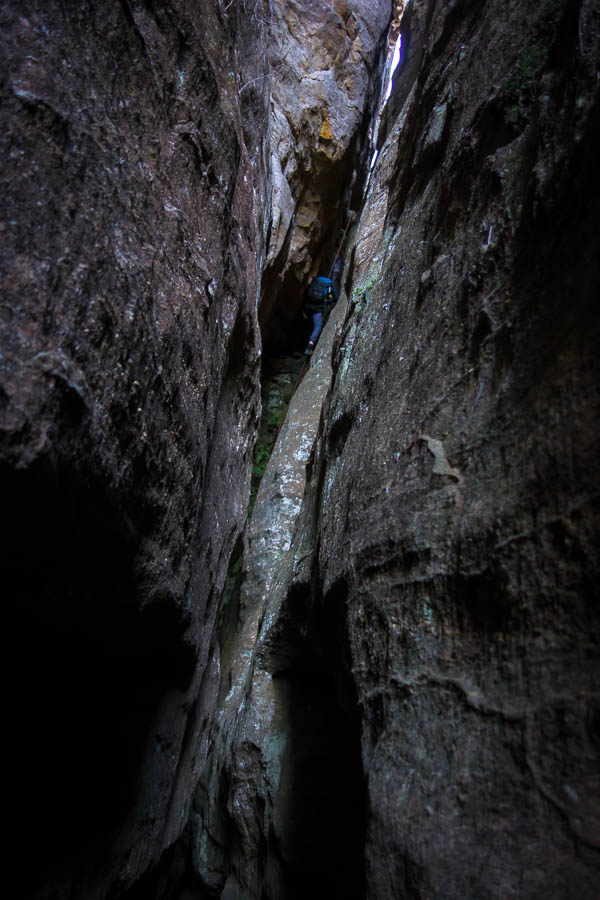 The others started on lunch at 2pm in the feeble sun in the creak bed while I went to look for some water. We’d picked some up the day before but not in a spot we could get to today, I went a long way downstream and didn’t find any. Oh well, we’d have to make the 7L we had back at camp do. I scoffed my lunch on my return and then we were off. Detouring off from the exit I found a couple of pools – not the most attractive looking but definitely good for putting out the fire, and probably fine for drinking if you didn’t mind heavily tannined water. 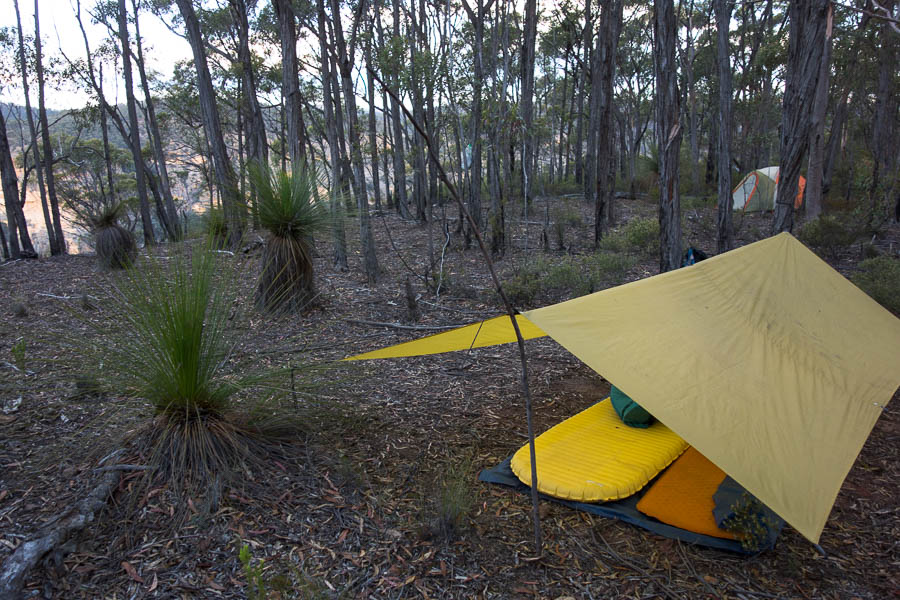 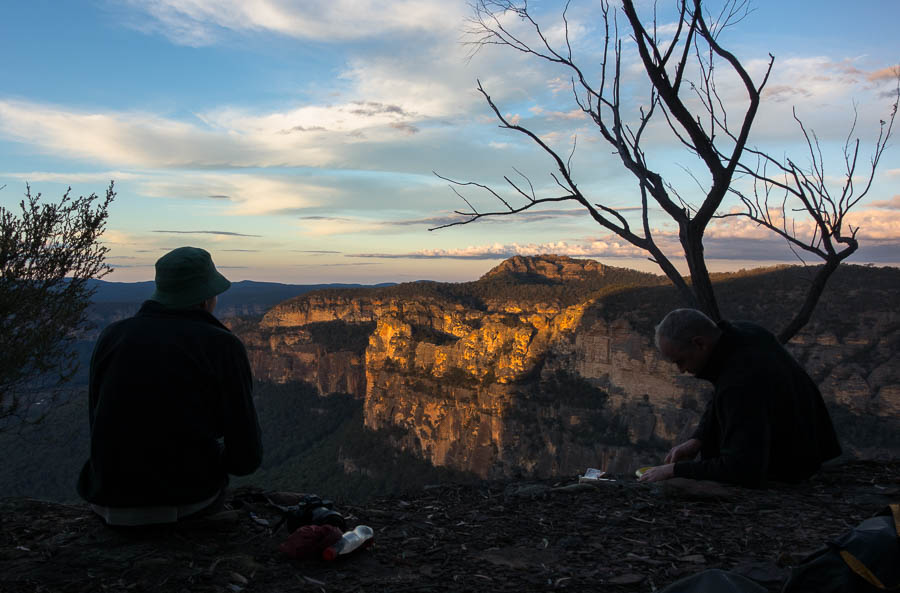 We made it back to camp in the light – but only with half an hour to spare. The sun was already lighting up the cliffs opposite camp with magnificent colours so we settled in for cheese & biccies and Good Weekend Quiz. (For the record a respectable 18/25). 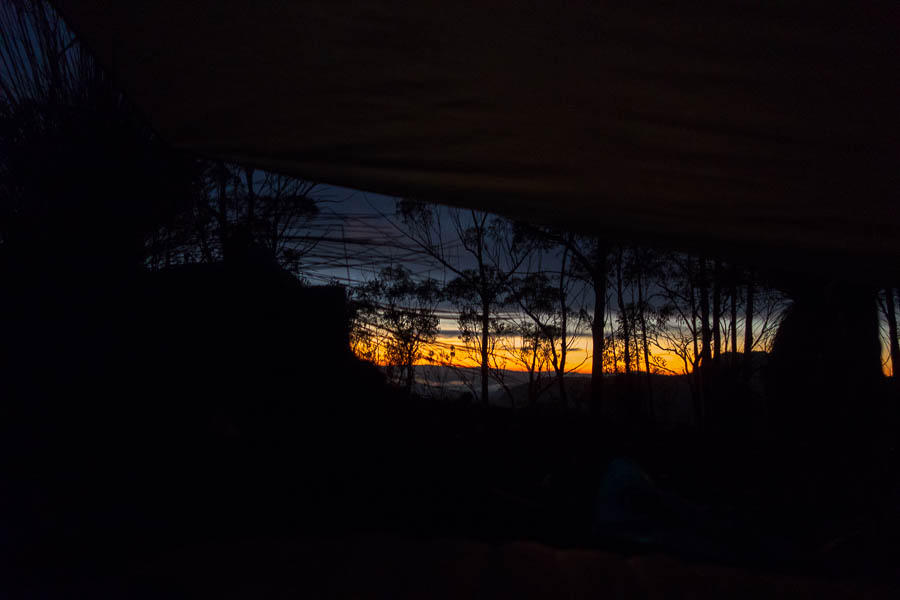 Sunrise from the comfort of my sleeping bag – some advantages to sleeping under a fly!

Our final day I decided to stay at camp with the Good Weekend while the others went to explore another small creek. Then it was just a matter of retracing our steps back to the car – easier said than done when we were all feeling the impact of a much harder weekend than planned! Relieved to be back at the cars we then had a slow drive home in the long weekend traffic – broken up by apple pie at our usual stop on Bells Line. A great weekend in the bush – though maybe next time we need something a little easier after a 6 week lay off!