Tom and I had set out on a 4 day trip on the 27th but that lasted only a day as Tom re-injured his wrist. Disappointed we headed home and I put out a call on facebook for canyon playmates not really expecting any responses since any self-respecting outdoors person would be away on an extended trip at this time of year. Plus the forecast was for temperatures in the mid-high 30s which was a bit daunting. To my surprise Alex said he was keen (just to clarify, Alex is of course a self-respecting outdoors person who had meant to be on a 5 day trip which had been cancelled due to the heat). I’d been wanting to get back to Crikey for a while and suitable/willing canyon partners for that trip were few and far between so suggested that as my preferred option. Despite having just driven back from the Newnes Plateau on the 28th I was up at 5:30am on the 29th doing it all again. Alex was (surprisingly) early for our meeting at North Richmond, and we were away from the car at the HITW carpark by 9am. Alex hadn’t been to the area before so didn’t have the same scarring of walking the tracks into HITW previously (or maybe I’m not so much scarred from the walk in but the anticipation of the long walk out).

It wasn’t long before we were dropping into the cool recesses of Hole-in-the-Wall. As there were no other cars in the car park we didn’t see any one as we made our way through the canyon. 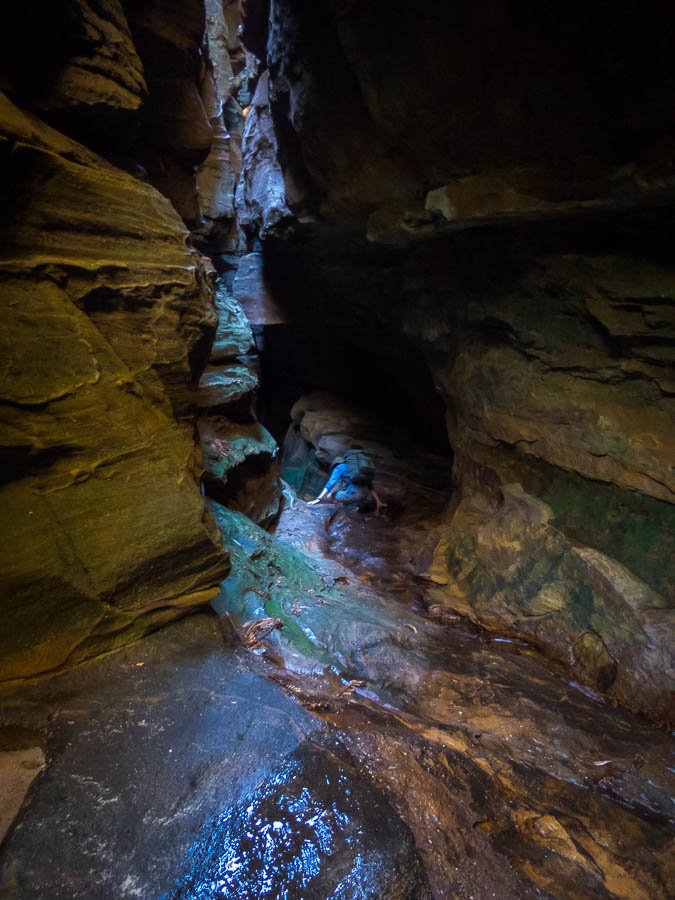 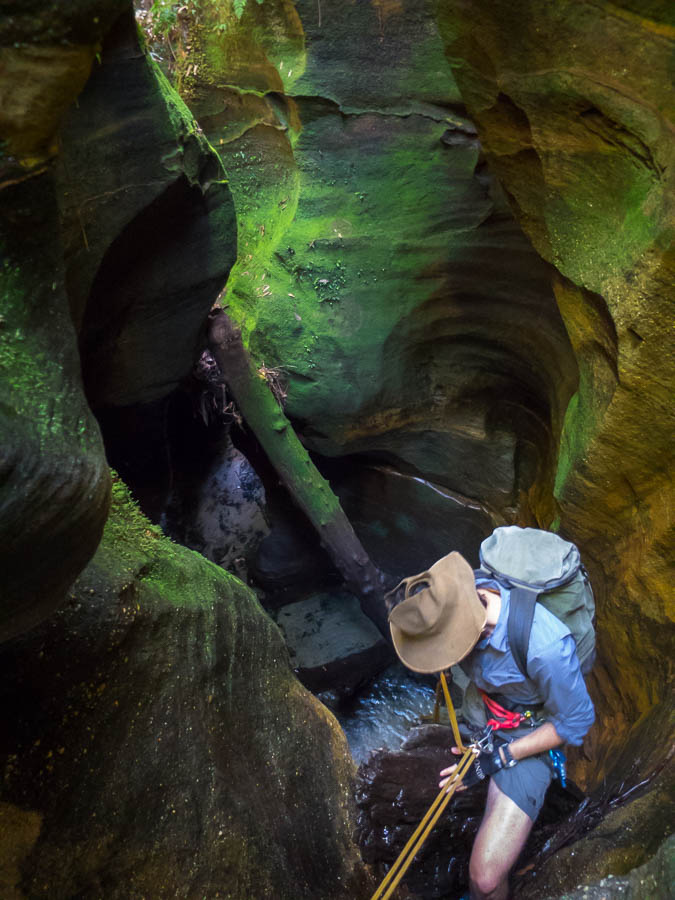 The squeeze in the glowworm cave was a bit strenuous with our overnight packs but eventually we were both through. 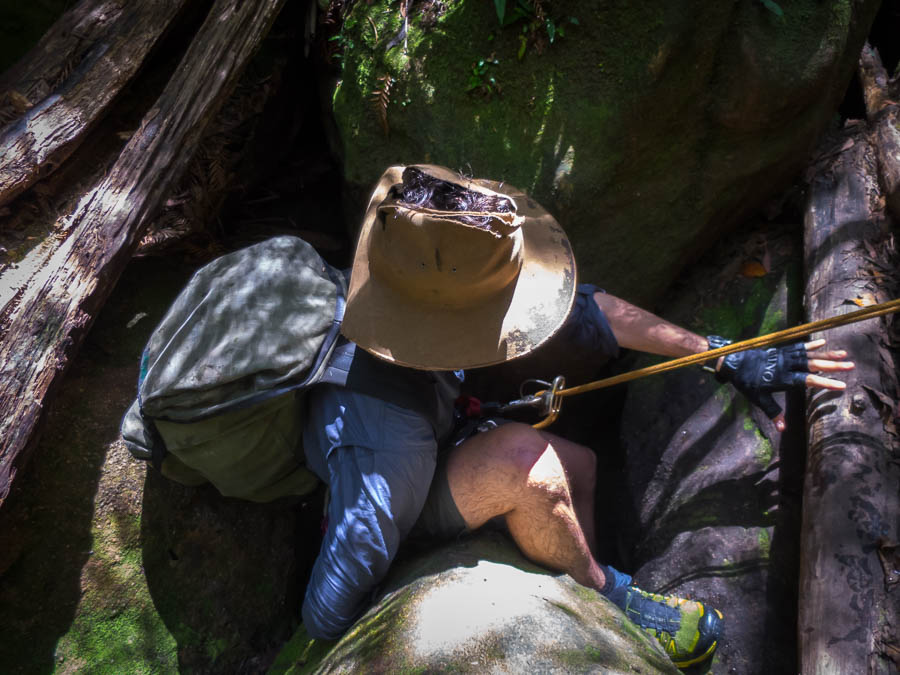 Are you sure you can fit into that hole?

It was midday when we hit Dingo Creek. We had lunch at the ‘usual’ lunch spot then headed up North-East Canyon. It was almost a year to the day that I’d done Nosedive with James so that meant we avoided any faffing about with route finding. 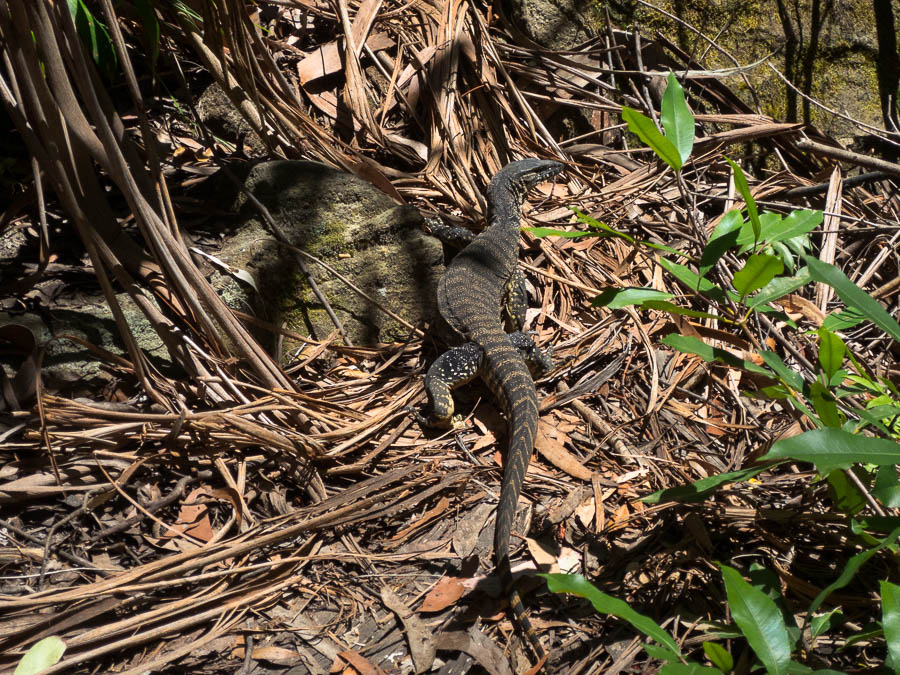 It is very quick to get into Banks Canyon and I couldn’t believe it had been 13 years (also almost to the day) since I was last there. The upper section is very pretty if not particularly deep. 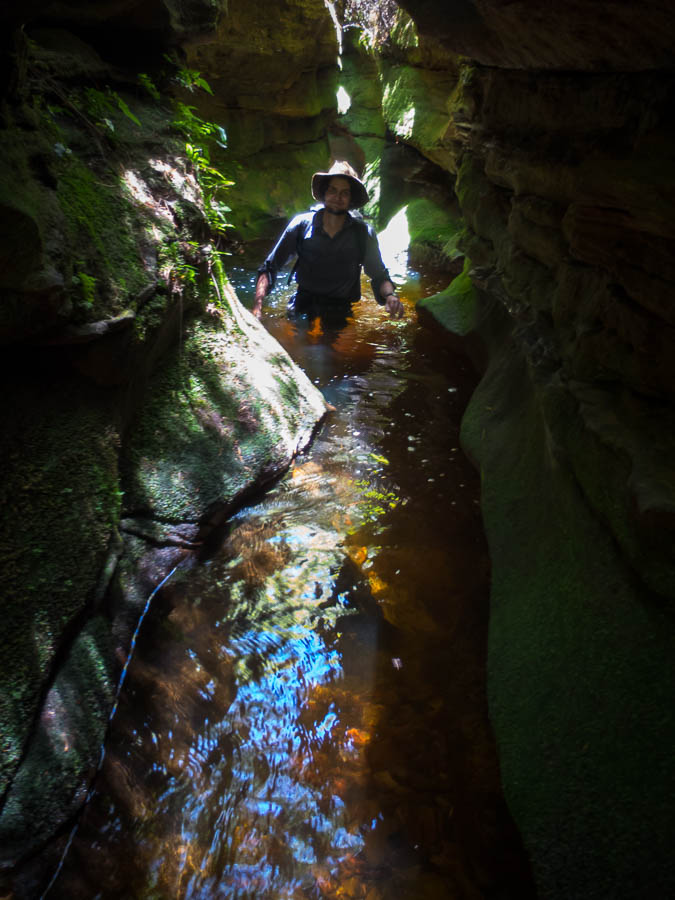 Despite having done the canyon once before I had no memory of it and I hadn’t looked at the notes which made it feel exploratory (if not for the proliferation of slings). It makes things much more exciting when you’re abseiling into a dark hole and you can’t tell how deep it is! 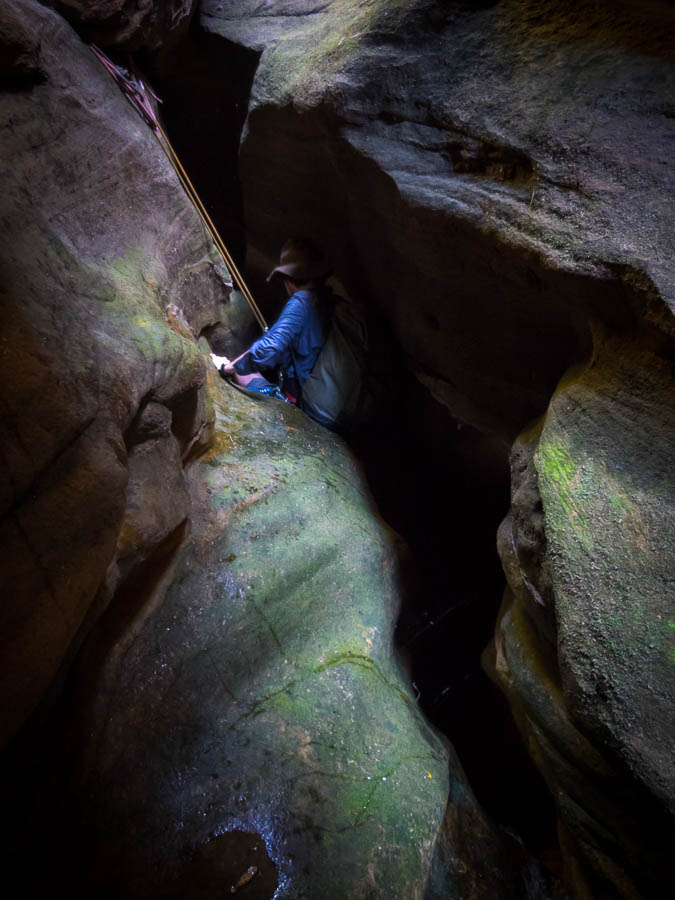 Alex abseiling into the dark 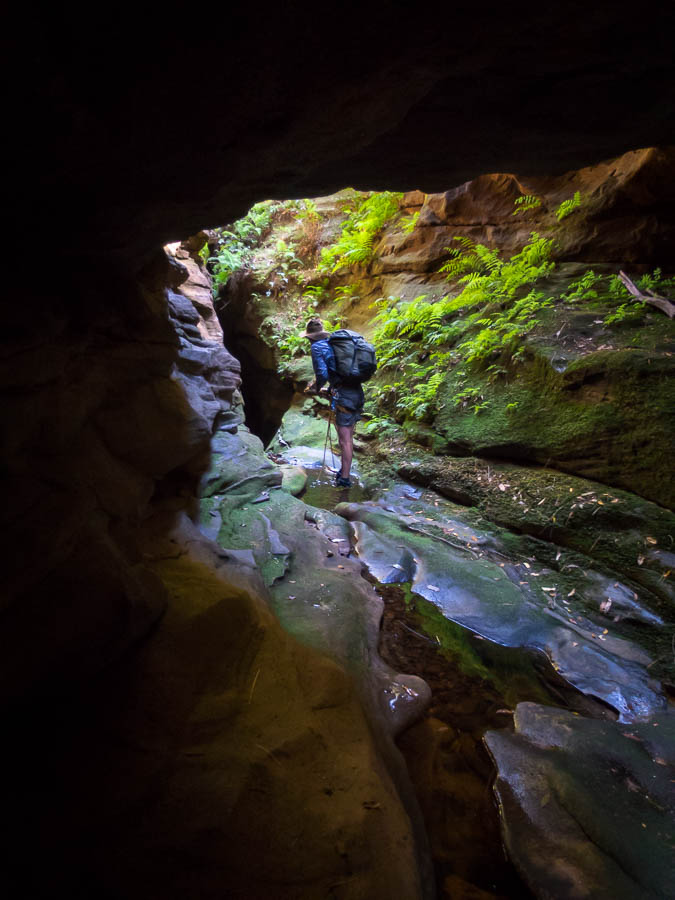 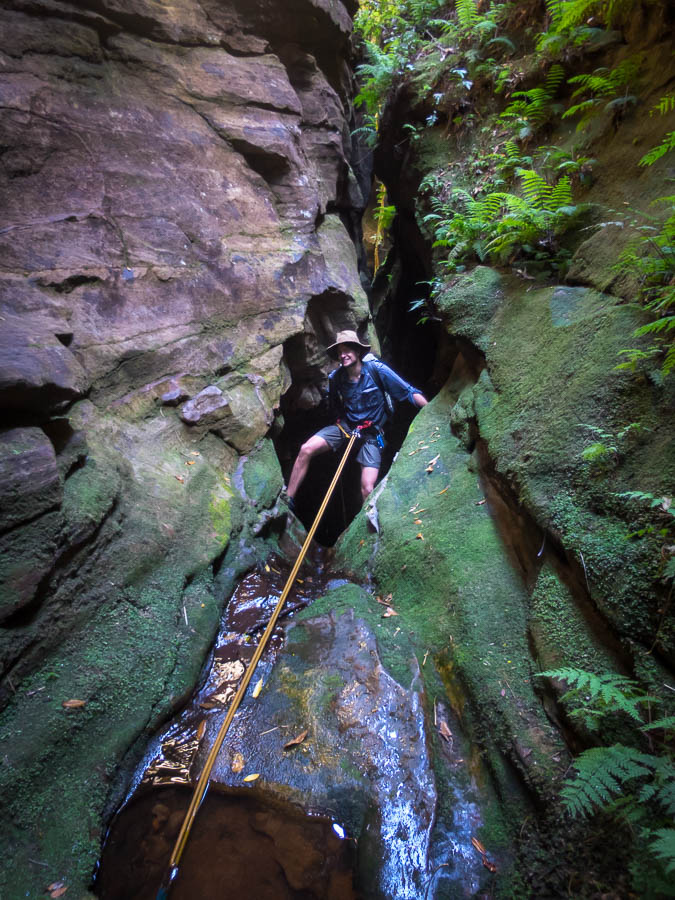 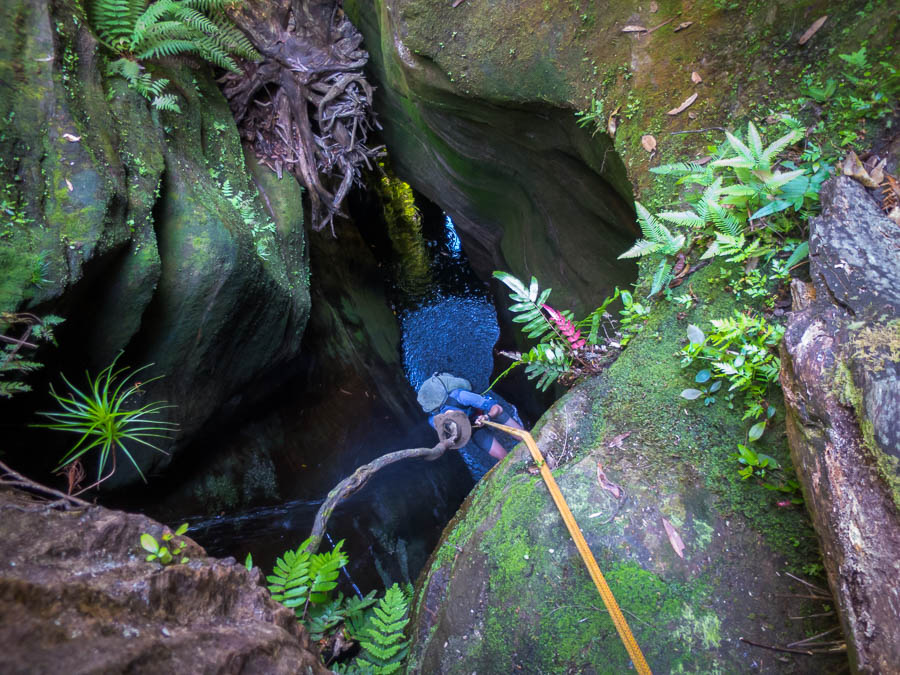 It was 3pm by the time we were back in Dingo Creek. We walked downstream, stopping to check out the lower reaches of Fortitude Canyon. 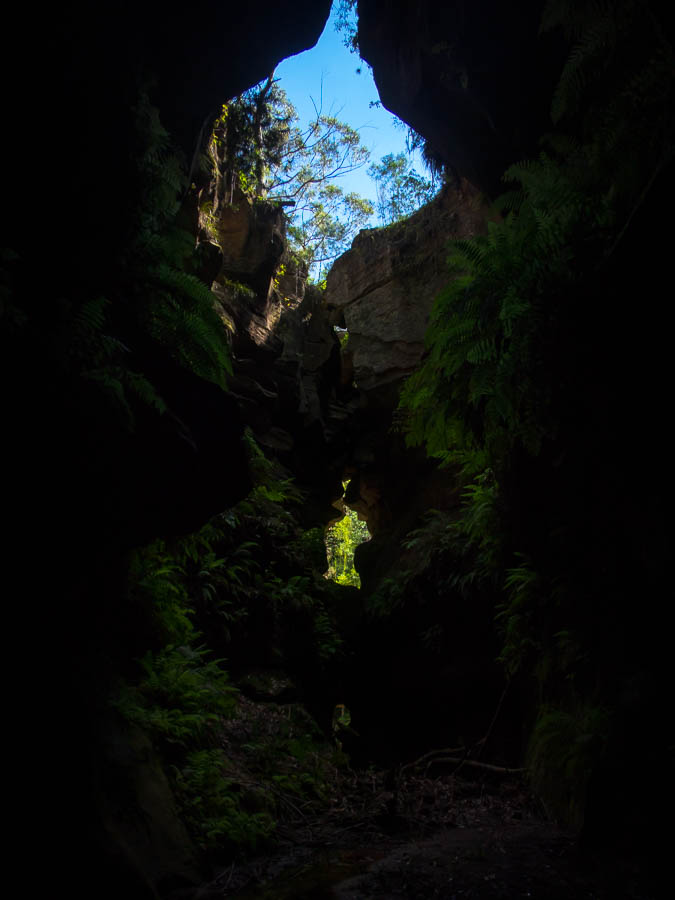 Looking towards the Bungleboori from the bowels of Fortitude Canyon

After some discussion we decided we’d push on to Froth and Bubble before making camp. The next sections of the Bungleboori are lovely, with towering cliffs and canyon formation. It was hard work with my overnight pack and lack of canyoning fitness (only the 3rd day this season?). 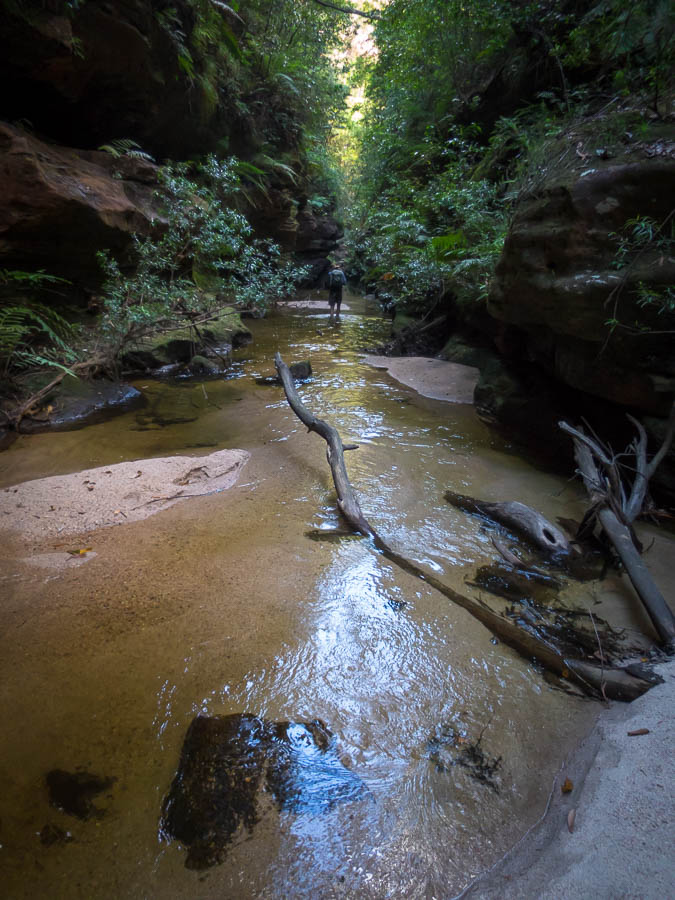 We got to the Froth and Bubble junction at 5pm, and I realised I had no information about the supposed camp cave in the area. Fortunately it took us all of about 2 minutes to find a good one. So we settled in for a pleasant night around the fire (glad that we were in Blue Mountains NP and not Wollemi NP where the park fire ban for all of summer is still in place). It was fairly cool, no clues down in the creek of the heat wave which had settled over NSW. 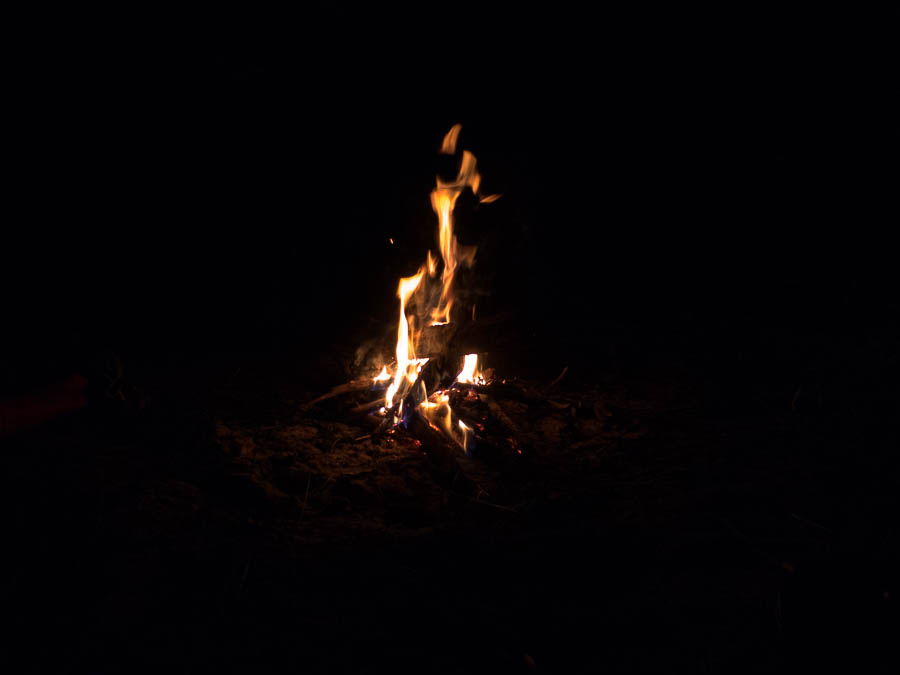 I didn’t have a great night’s sleep. I was woken from a deep sleep thinking Alex had whacked me on the elbow with sticks he was breaking for the fire… to find he was asleep and the fire was out. That somehow turned to me thinking some creature had bitten my elbow. But there was no scuttling of a creature retreating into the bush. Unclear what had been dream and what was real I struggled to go back to sleep full of thoughts of a creature large enough to bite my elbow. Eventually I drifted off only to woken by very noisy rustling near my head (which was pointed into the back of the cave). Again no tell-tale noise of a creature retreating, so I tried to sleep again. The rustling returned. This time I decided to get the torch out and have a bit more of a look around. To my surprise (and some relief?) the Bruschetta Chip packet, which had been sitting by the fire when I went to bed, was now only a metre from my head. The packet was made of foil and explained the loud rustling. I figured whatever had moved it would be back so I sat there in the dark waiting to spot it when the rustling resumed. I didn’t have to wait long before there was a rattus fuscipes staring back at me in the torchlight. It was somewhat unperturbed and stared back for a long time before eventually abandoning the bruschetta chips. I put the chips in the tree and finally managed to go back to sleep! 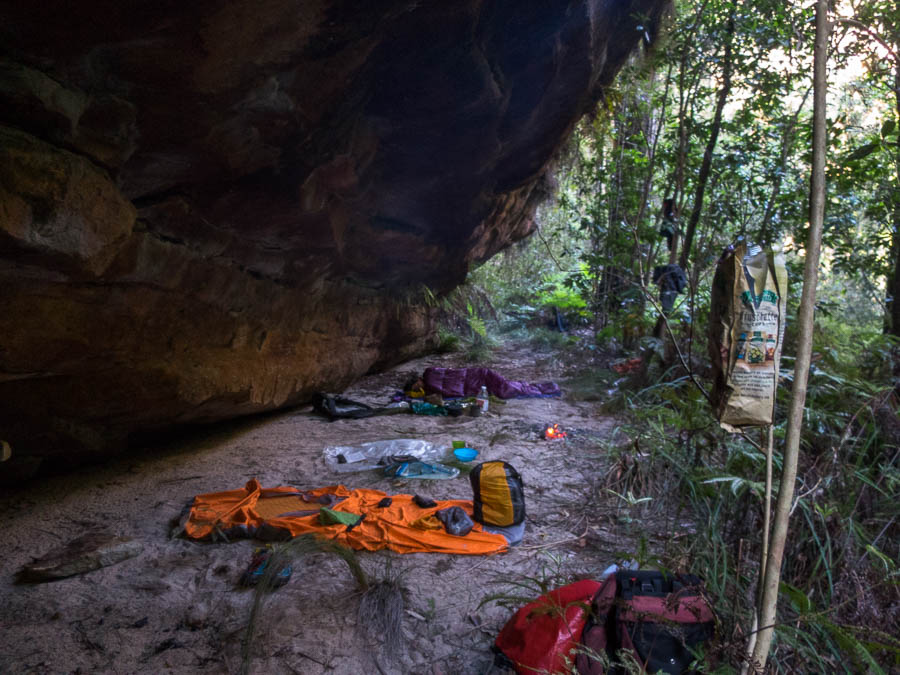 Our very comfortable camp cave… but why are the bruschetta chips in the tree?

I’d given Alex a sleep-in so we didn’t leave camp until 9am. The entry to Crikey initially seemed to be taking a long time but then suddenly we were in, an hour after leaving camp. 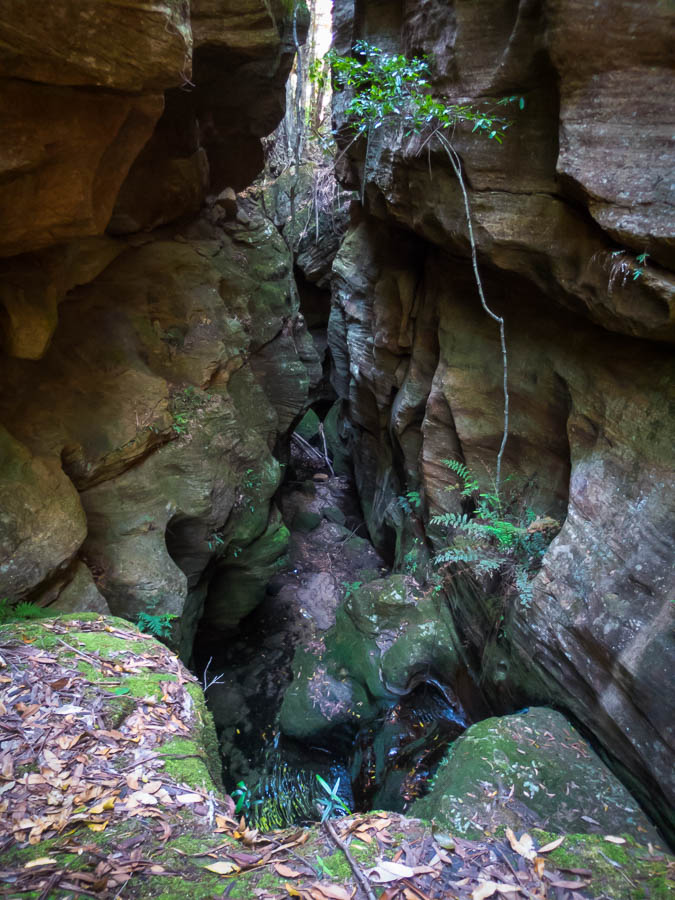 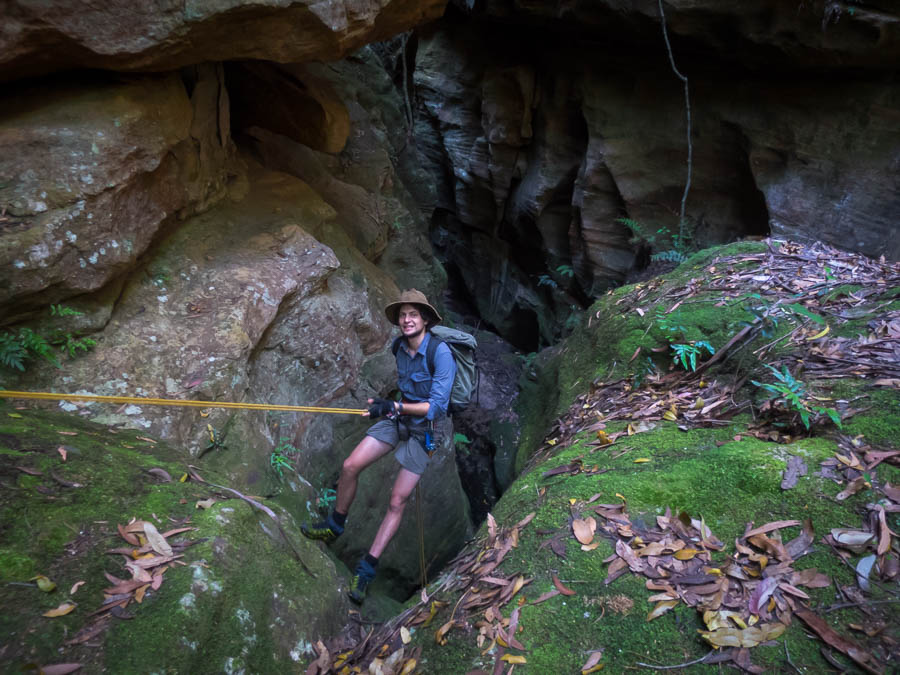 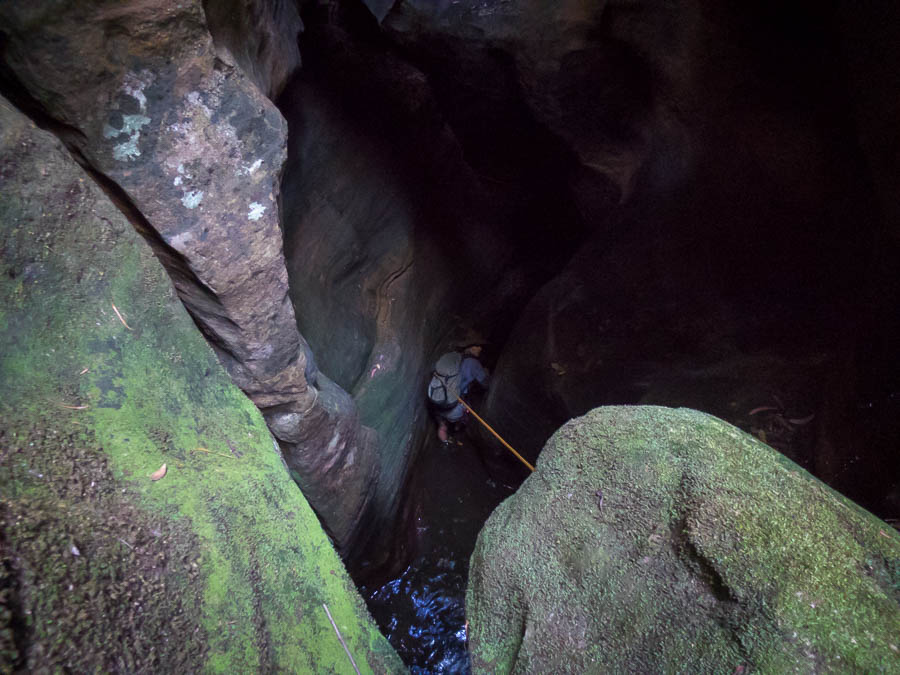 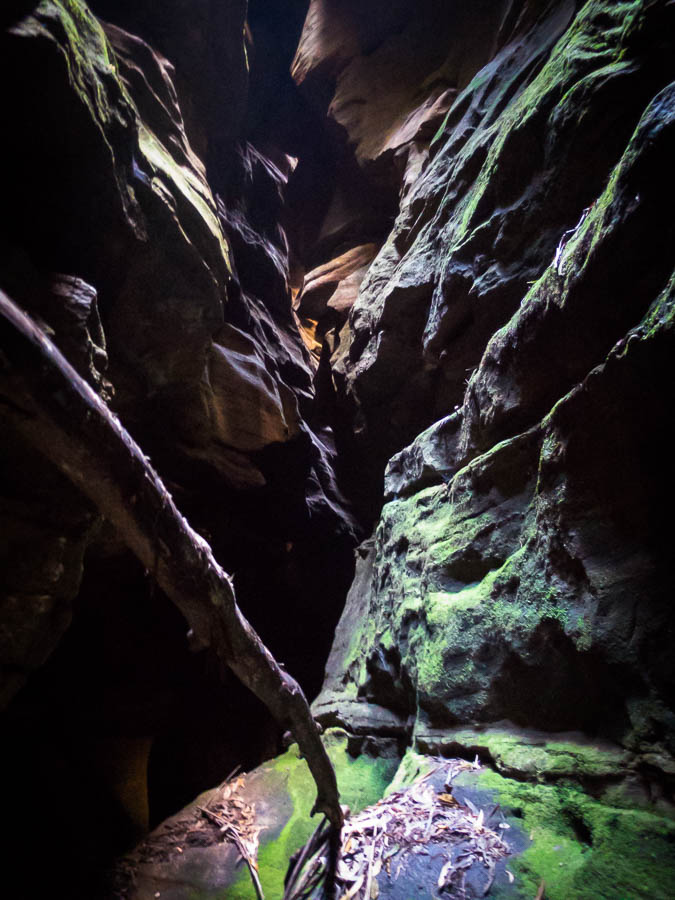 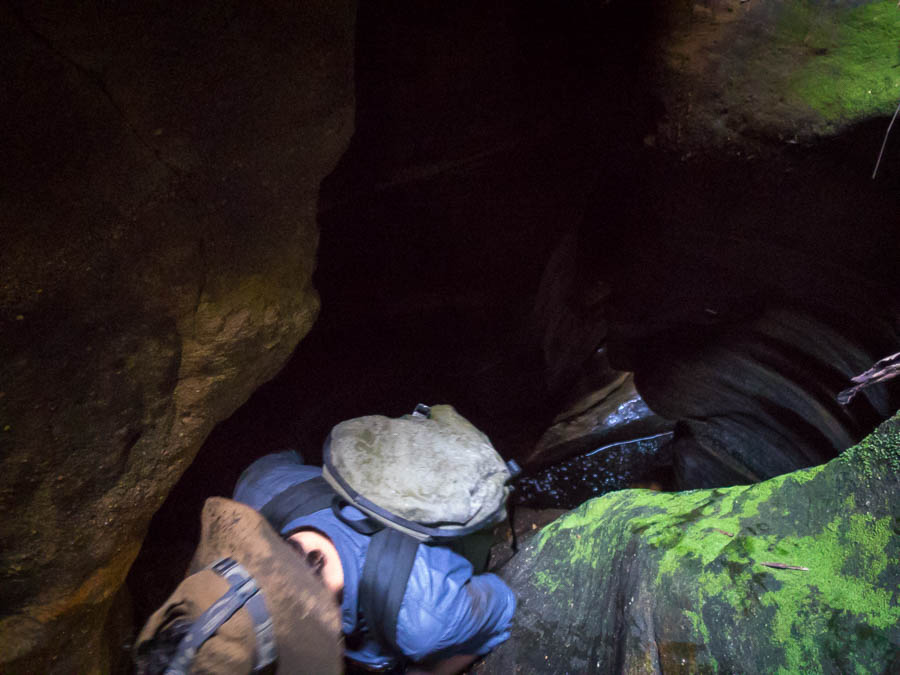 Alex about to abseil into the gloom. We had our torches on

At the bottom of our 3rd abseil it was pretty dark so we were using head torches. There was a large eel in the pool which seemed attracted to our lights and hung around close to the surface while we retrieved the rope. As Alex said sometimes it’s better not to have light so you can’t see what’s in the pools! 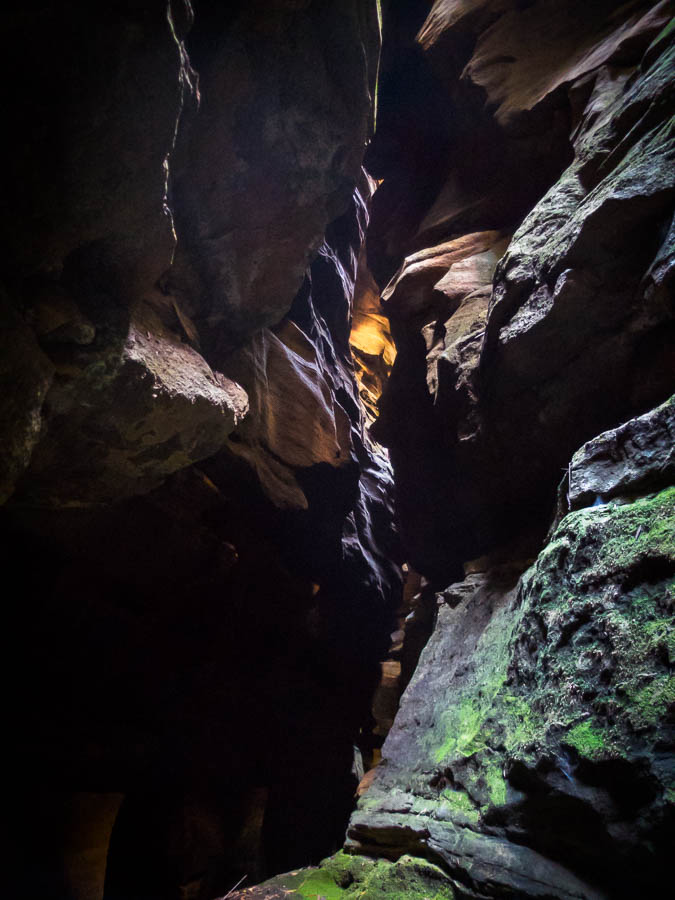 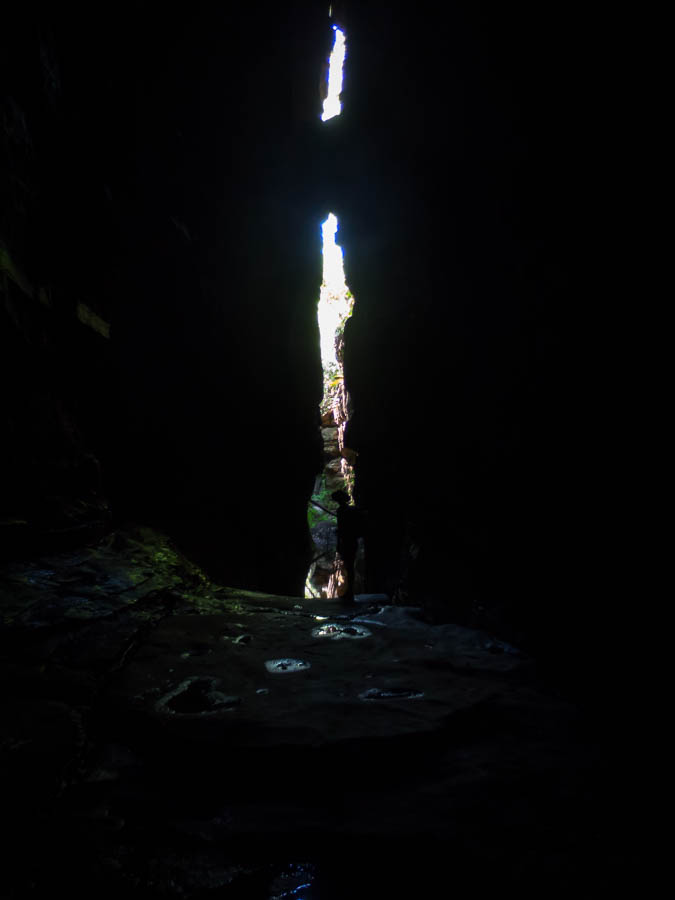 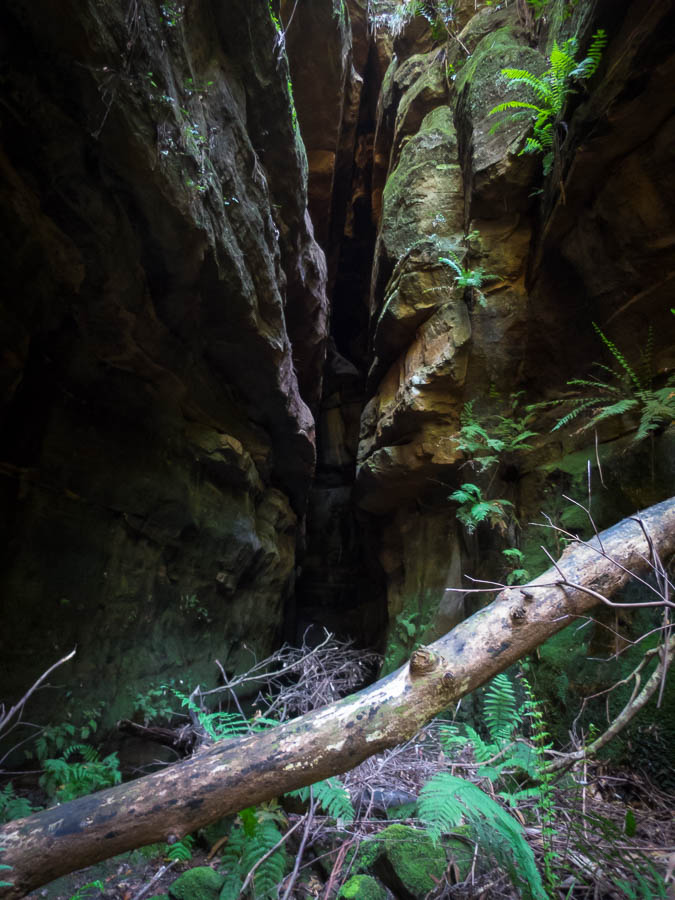 Looking back up canyon 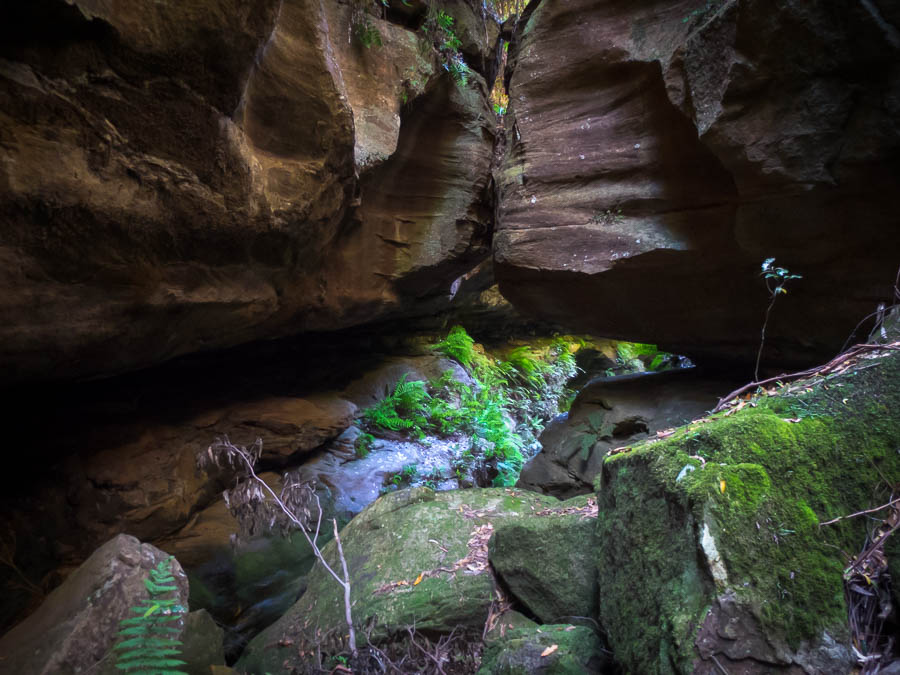 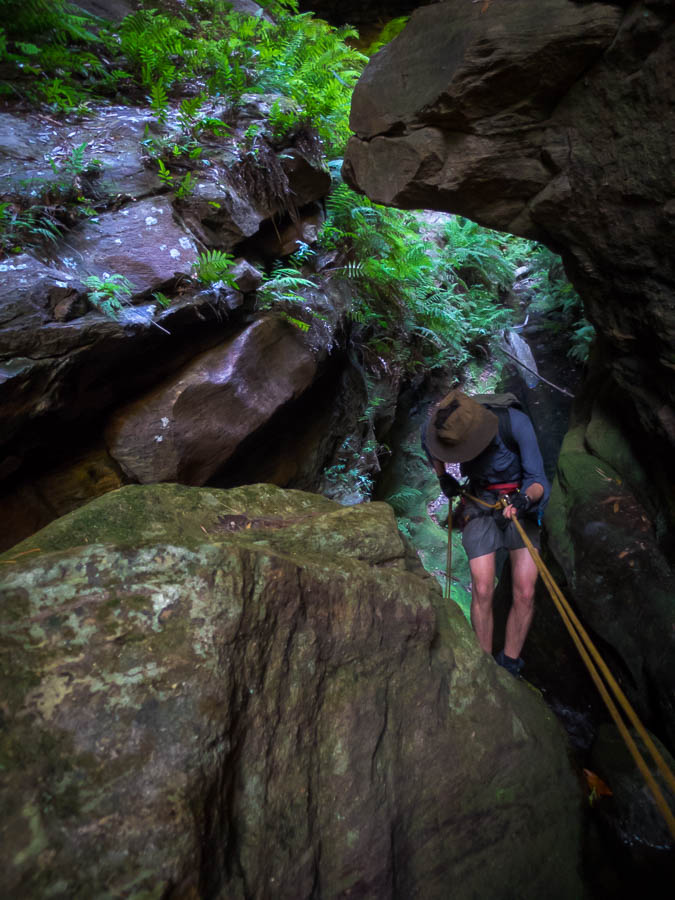 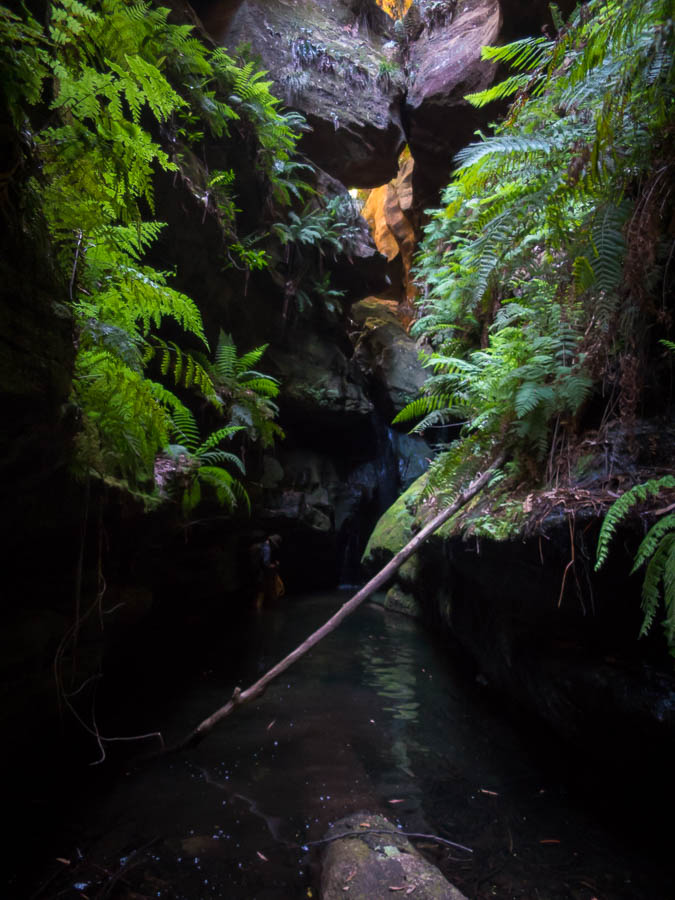 A bit further on Alex yells up from the bottom of an abseil that he has a snake on him. I figured I’d misheard but when I got down there was a very small snake which appeared to be dead floating in the pool. Alex assured me it was very much alive when it was on him, so we weren’t that surprised when it suddenly rolled over and stuck it’s head up. I think it was probably a juvenile mustard-bellied snake. 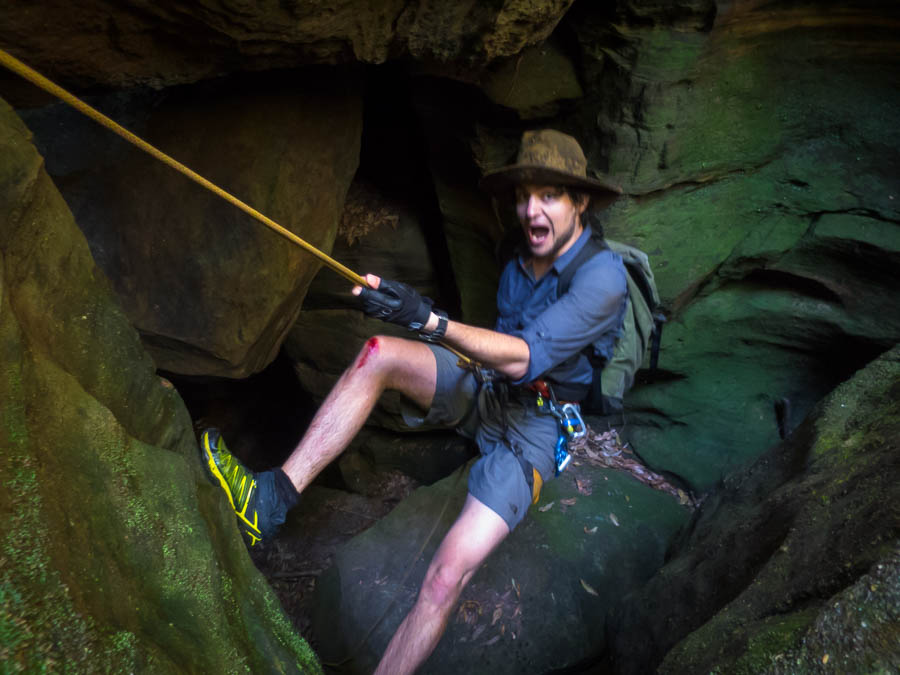 It was interesting to the see the ‘age’ on the rockfall at the end. When we’d been here in 2011 the fall was new. 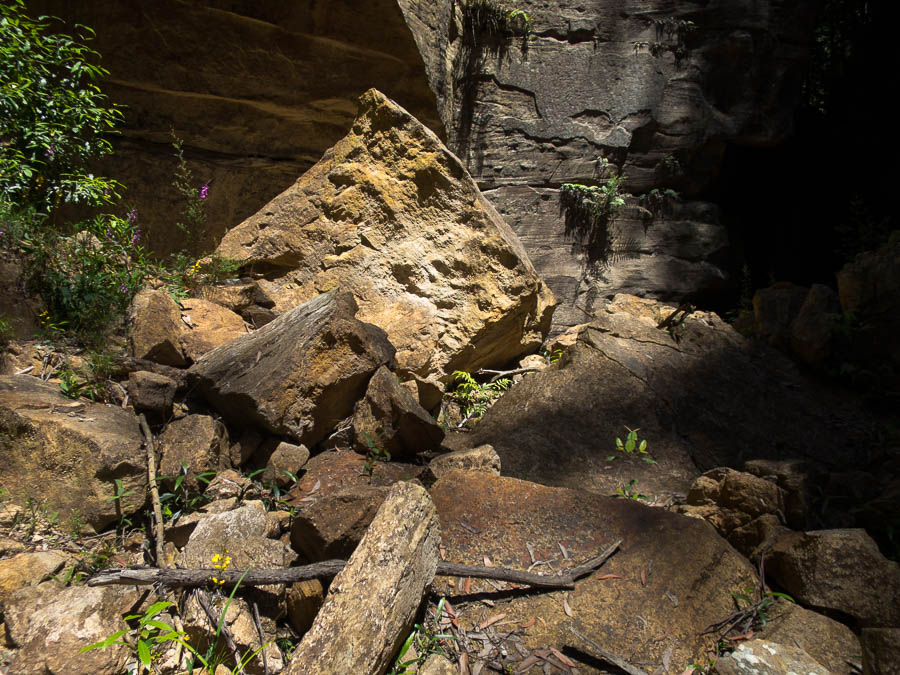 We were back at our cave for lunch, and then started the long slog back to the cars. 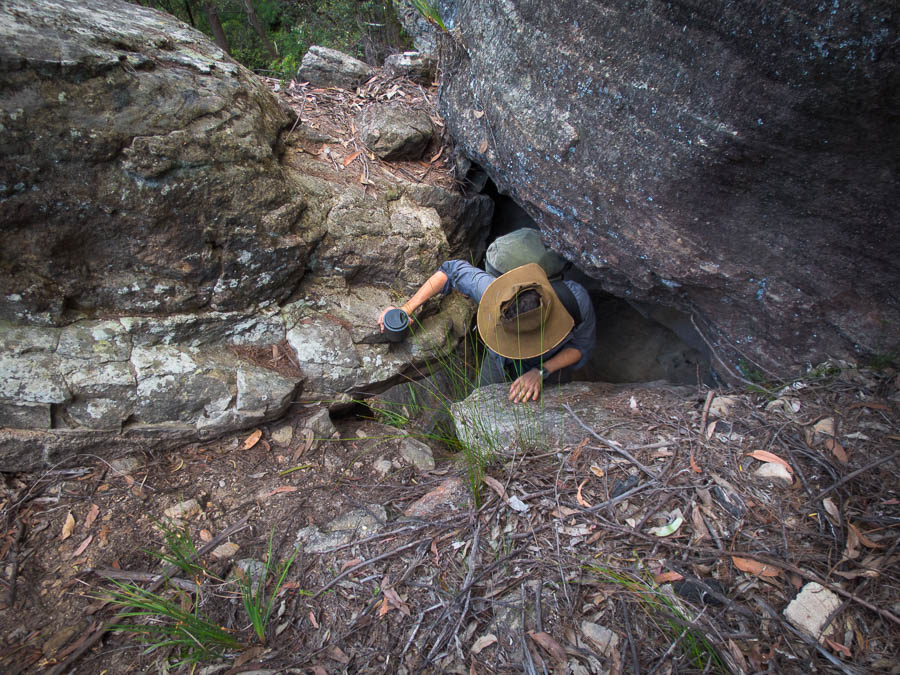 We went up Froth and Bubble Canyon as far as we could, soaking in the cool, knowing it was going to be a hot walk. 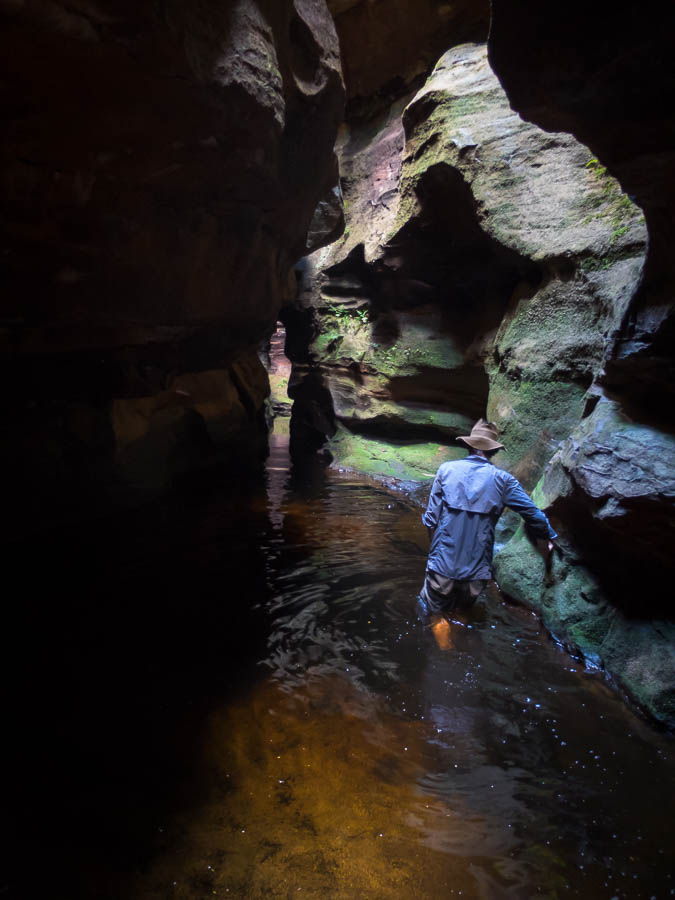 Exploring up Froth and Bubble Canyon

To our pleasant surprise there was quite a lot of high cloud and so the heat wasn’t too bad. The car temperature gauge did say it was 34°C when I turned it on at 5:30pm but had cooled down to 29°C after a few minutes of driving. A great weekend away.