With a poor weather forecast for Saturday and James with limited canyoning opportunities we made a rather late plan on Thursday night for a day of canyoning on Friday in the Bungleboori. It was a warm day, 31°C forecast for Lithgow, we were happy to descend into the cool of Hole in the Wall. 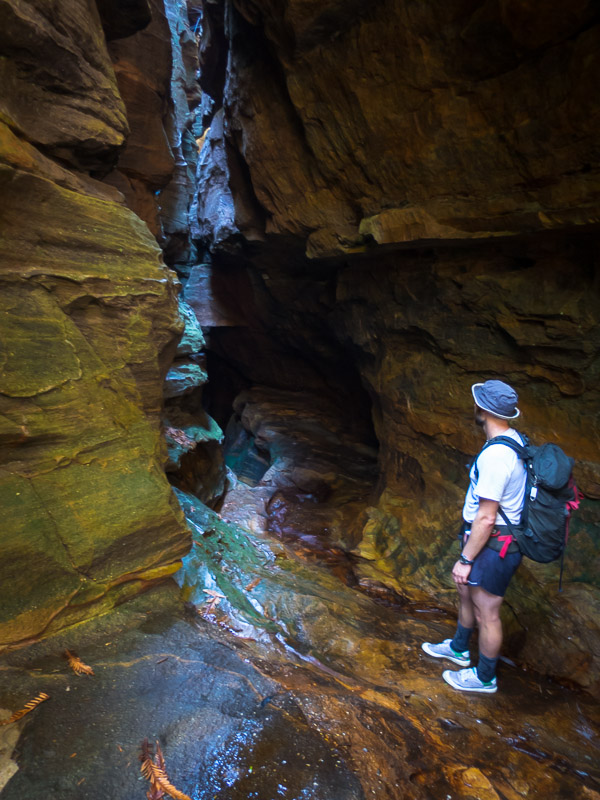 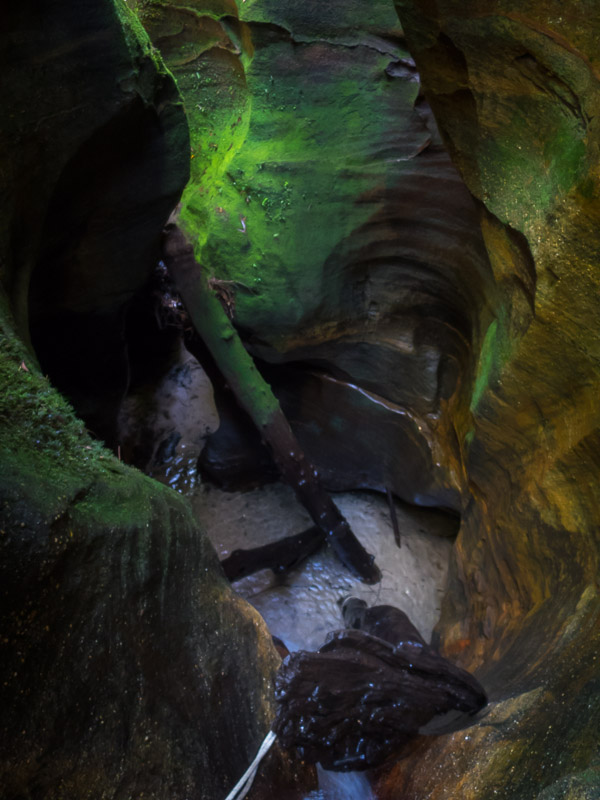 Such green walls, such clear water. What better place to be on a hot day. 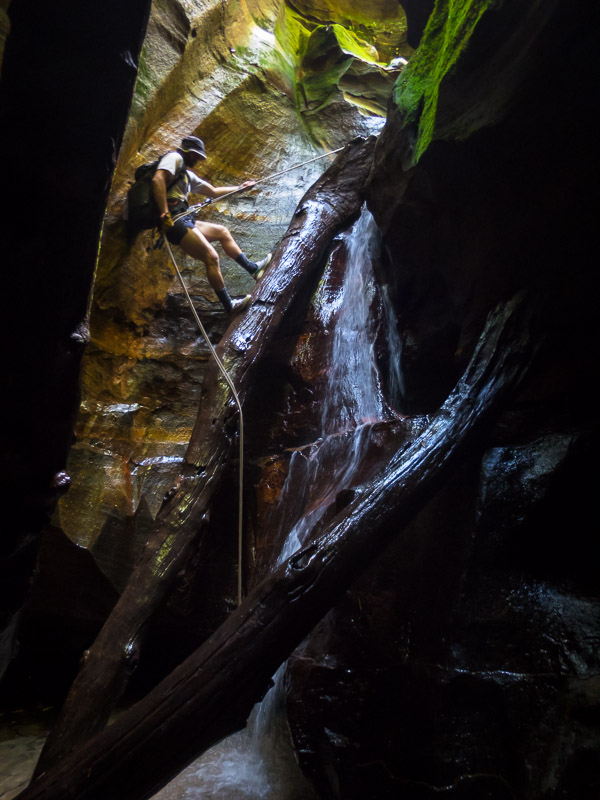 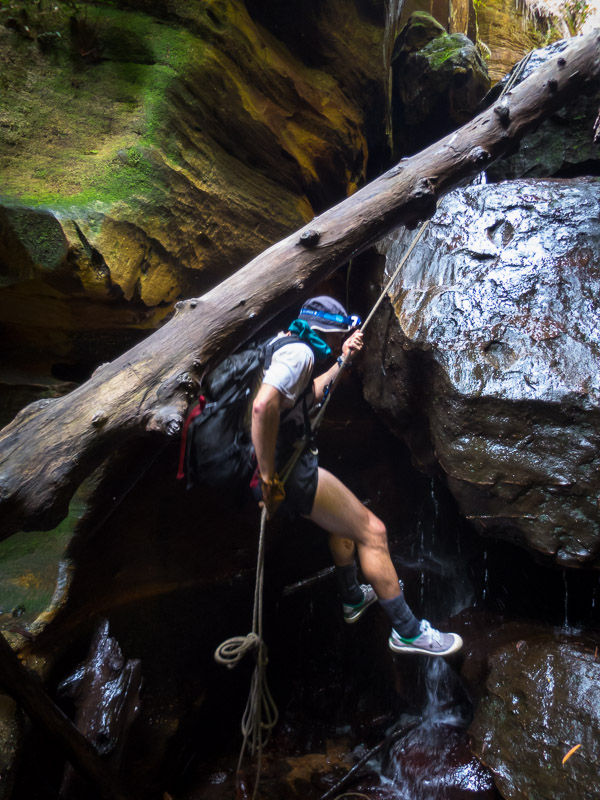 James on a short abseil 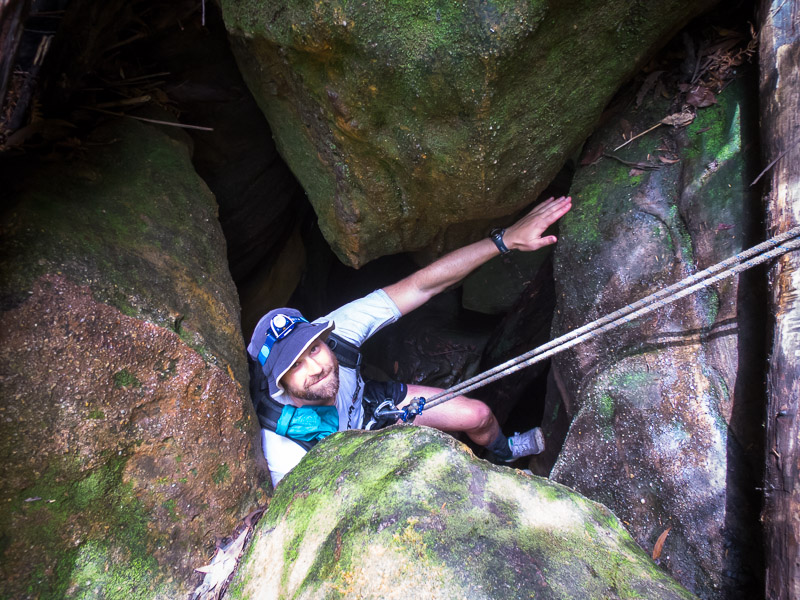 The tunnel section was spectacular. I don’t know that I’ve seen such a good display of glow worms. There was no point trying to capture them with the camera so I’ll just have to remember them fondly. It was like being in a cathedral of glow worms. We managed to climb over and squeeze through the various obstacles without too much difficulty. It was a bit of drop at the end of the squeeze into a deep pool. 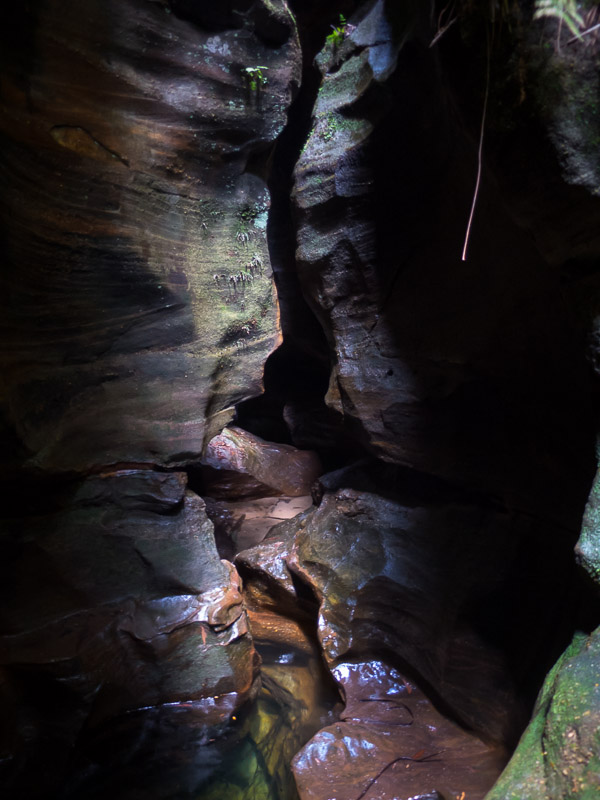 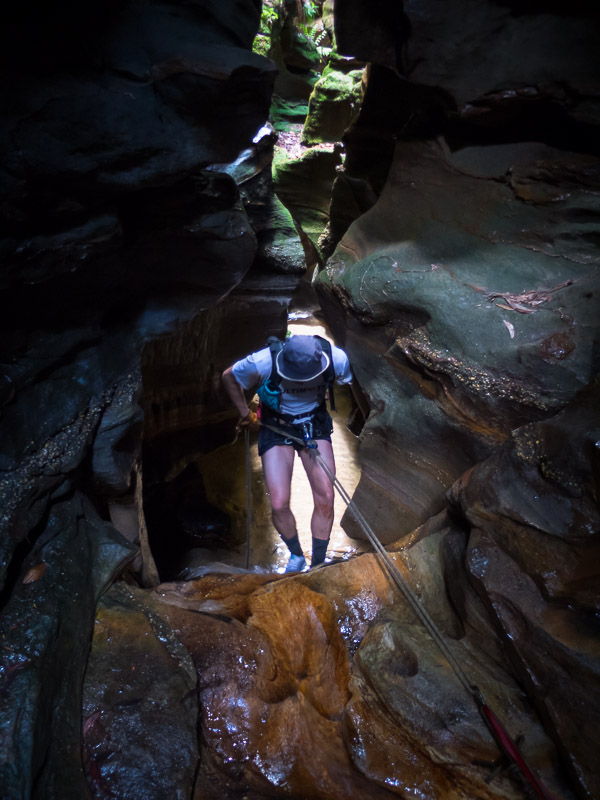 James on the last abseil in Hole-in-the-Wall

Once we’d made it to the exit it was time to head off on our real objective for the day; Nosedive. It had been 10 years since the only other time we’d done it so it was almost like a new canyon. Our plans were briefly delayed when a managed to bash my shin into a sharp rock. Memories of fainting after a similar type of knock two years earlier made me take a few minutes to get over the ensuing light-headedness. Two other canyoners who we’d caught up to offered me biscuits which I readily accepted. Eventually we decided to head off, I figured it would be clear quite quickly if I wasn’t going to be up for it. Though also causing concern were the dark clouds which had formed overhead – that wasn’t part of the forecast! By the time we’d made it up North East Canyon to the top of the ridge it looked like a fierce storm was about to hit us. But in the end it dissipated in much the same way it formed without any rain.

With the overcast conditions, and sections of Nosedive being quite dark naturally getting good photos was pretty much out of the question. We used our torches a fair bit to make sure we didn’t fall down any big drops! 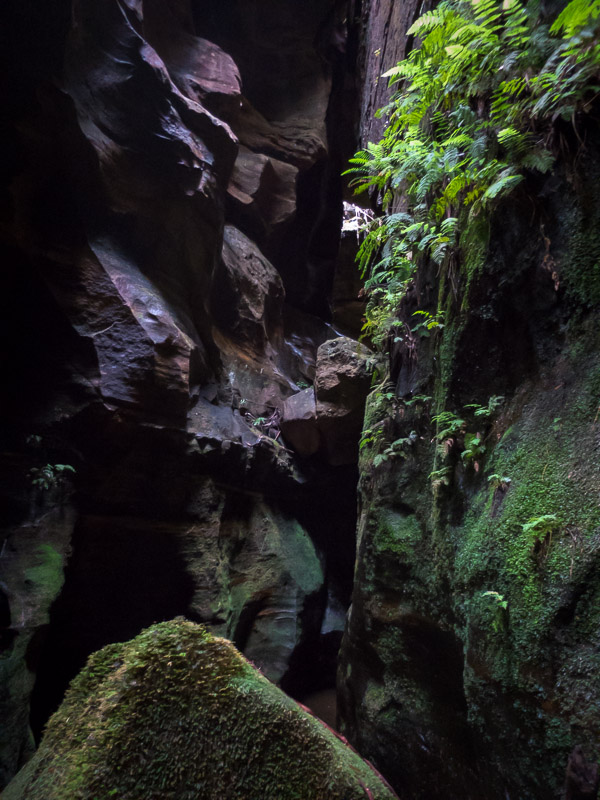 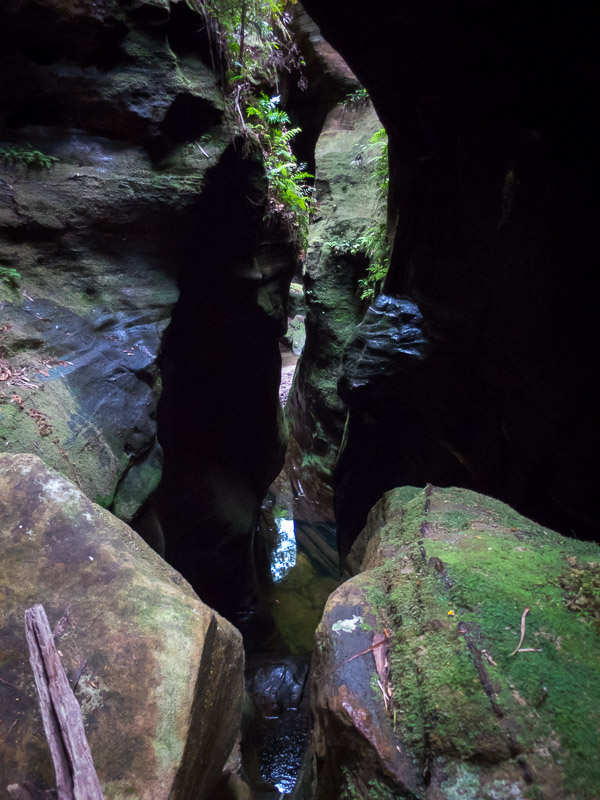 Top of the penultimate drop in Nosedive 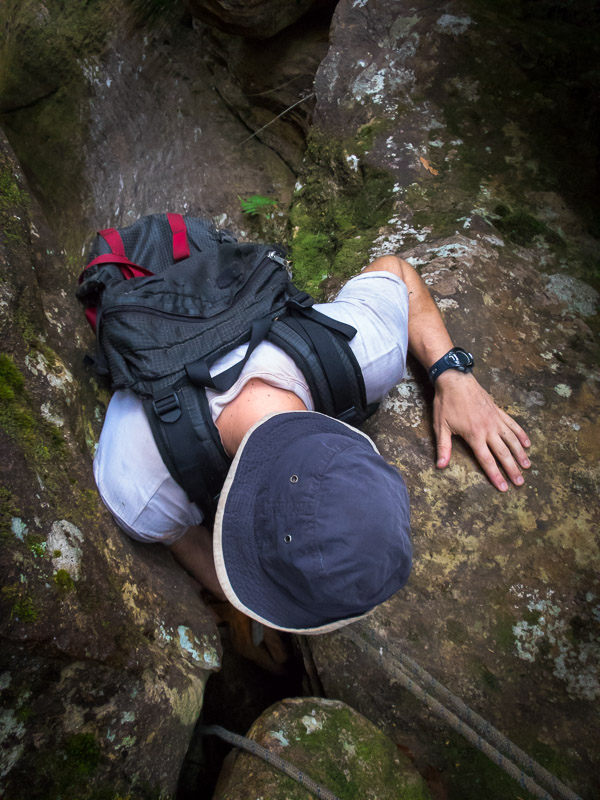 James on his way down to Dingo Creek 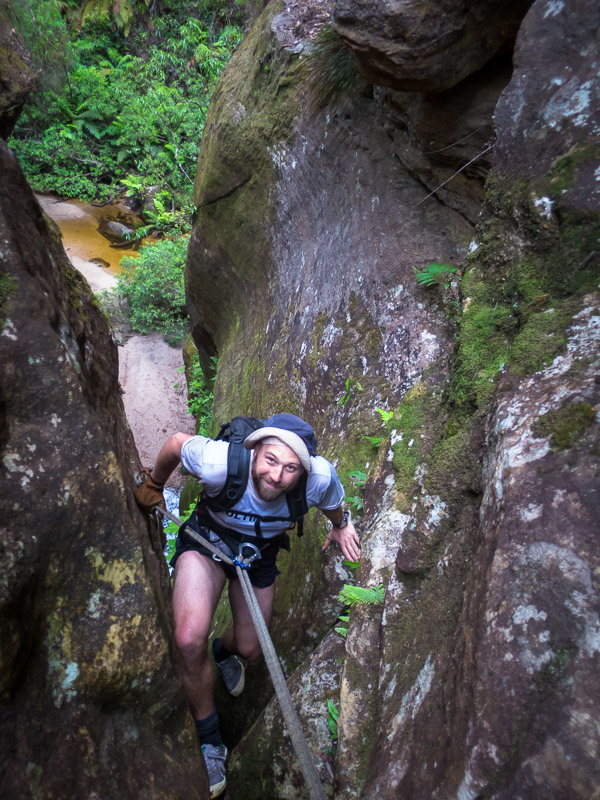 James still on his way down to Dingo Creek 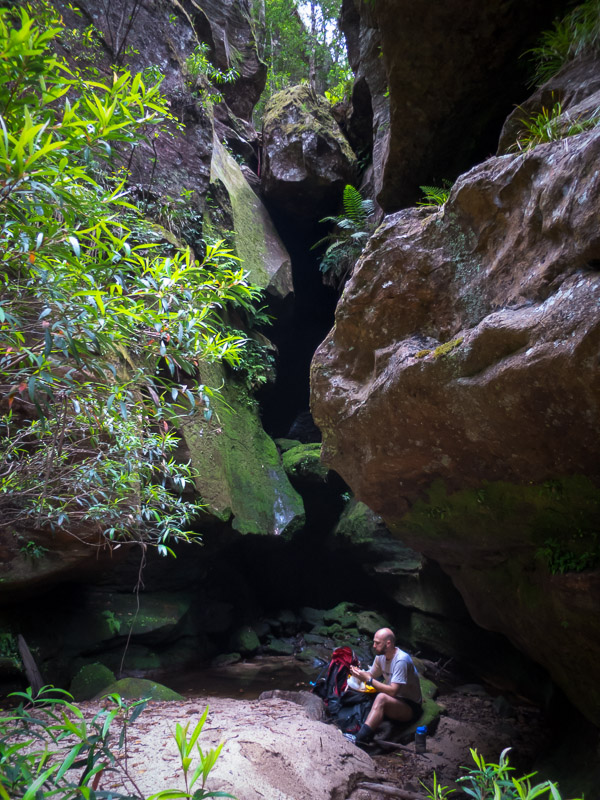 Having a snack before the wade up Dingo Creek 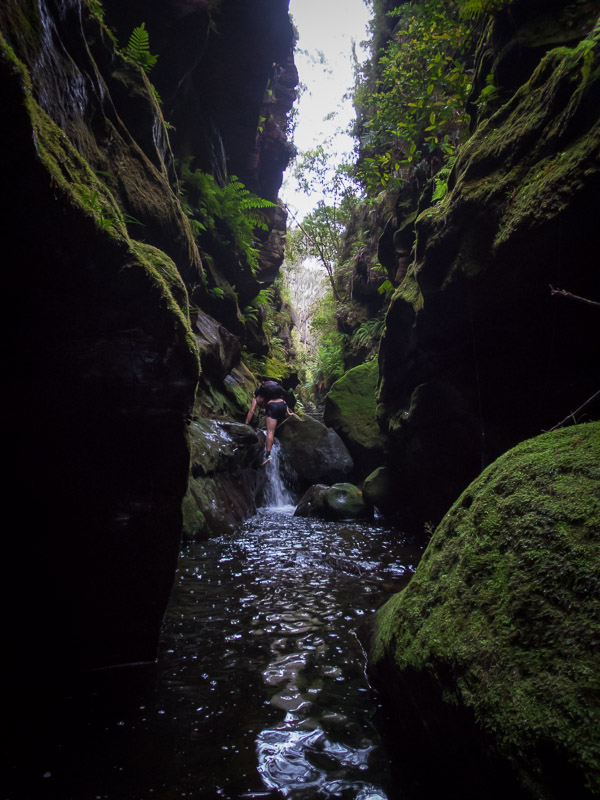 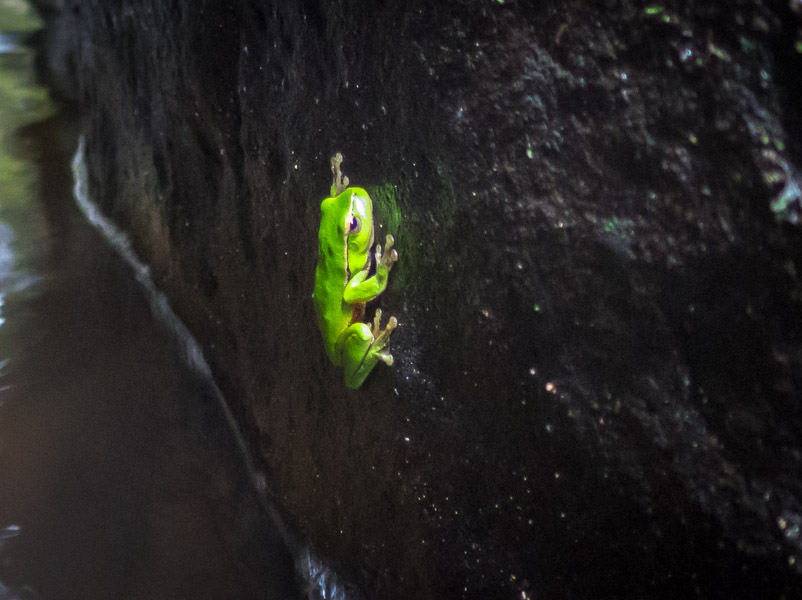 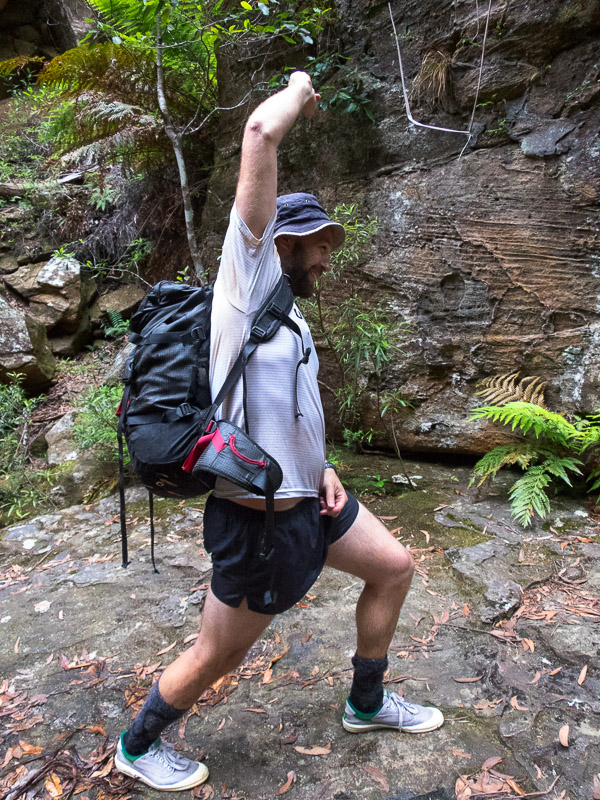 Preparing for the long walk out! 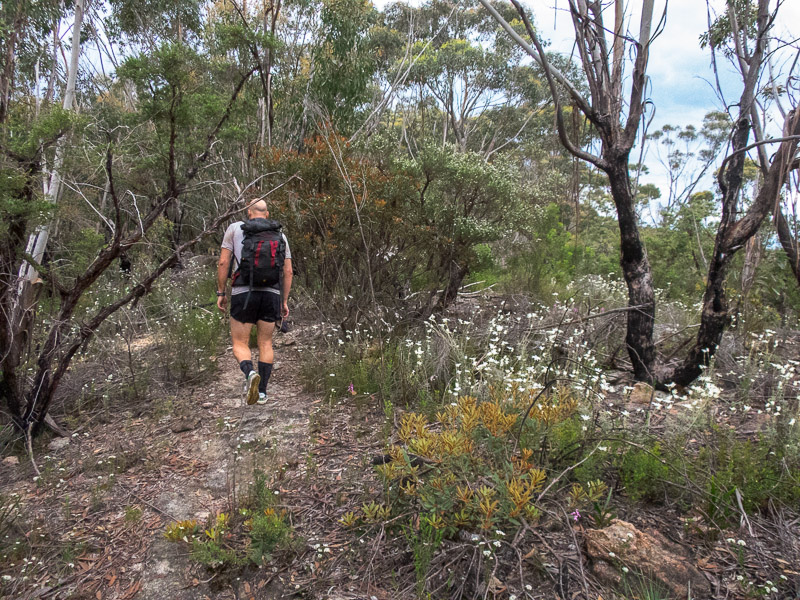 Meadows of flannel flowers on our way out

The walk out wasn’t as hot I was expecting, with the cloud cover cooling things down a little. We were back at the cars at 6:30pm, a 9 hour outing with two high quality canyons.

I put in a call to Tom on our way home, and his first question was “how is your shin?”. Somewhat confused I thought James had sent him a message, but no, Tom was very pleased with himself and wouldn’t reveal his sources… I figured the two canyoners we’d seen in Hole-in-the-Wall had recognised me from the many photos on ozultimate.com and emailed Tom, thinking James was him. It was my turn to be smug when we got home and my guess was correct.