I have walked the Kanangra to Katoomba route twice before – once as a 3 day trip back in 2007, (& photos) and then last year in 1 day. To complete the set I needed to do it in 2 days. The idea was conceived only a few weeks earlier when Jo & I were doing another SBW trip, and so it ended up on the SBW Spring Program. We had hoped to get enough people to do it in two groups, walking in opposite directions, with a car swap. We got up to 9 at one stage but in the end we had a party of 6, so only one group. Which was fortunate since that meant we all fitted under the shelter shed when we arrived in the rain at the Kanangra Walls car park on Friday night. 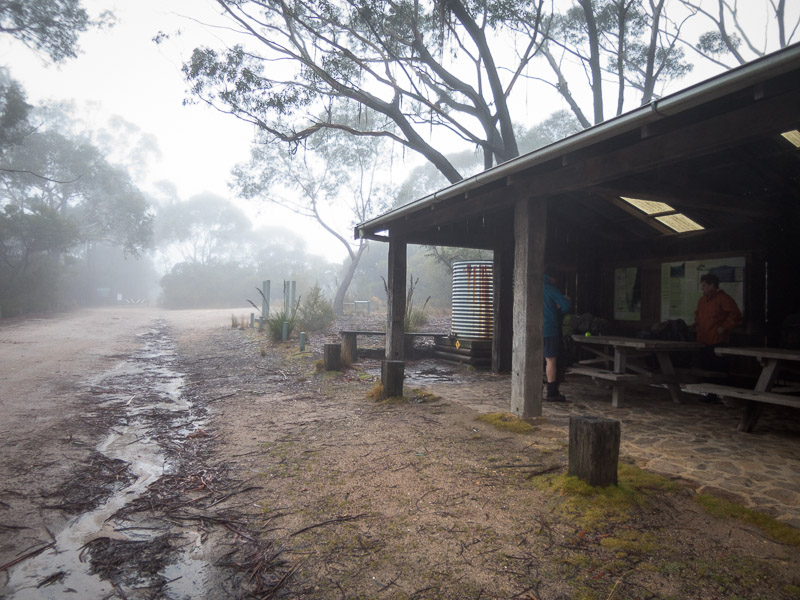 We were rudely awoken by a fellow SBWer “Kanangra Bill” who was up before the birds (or at least well before my alarm). Nicci & Bill were off even earlier than us. Our group got away at 7:20am. It seemed the bulk of the rain had bucketed down in the early hours and we were hopeful the cloud would lift during the morning. 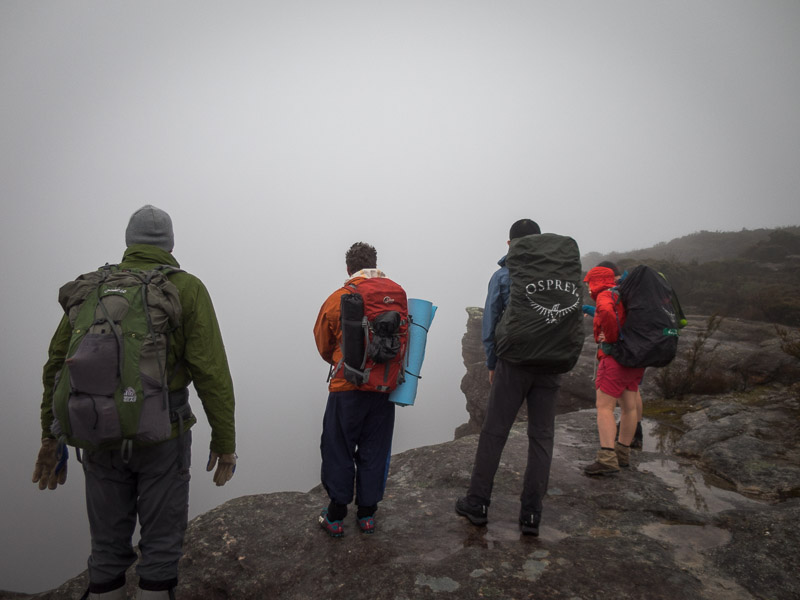 Enjoying the views from the plateau

Thick low cloud and wet vegetation made for a fairly quick pace (as there was nothing to look at), countered by needing to take care with the wet surface underfoot. There was no question of stopping for too long as the cold quickly set in. 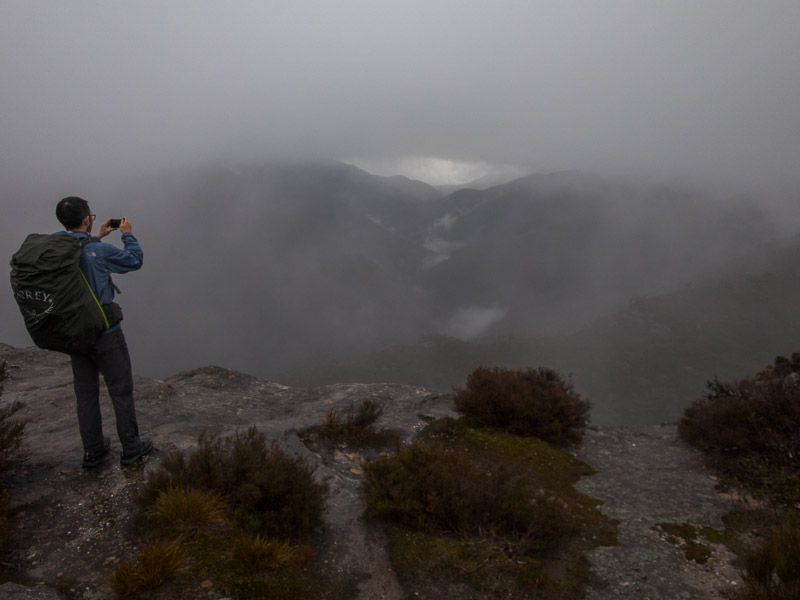 We got very excited as we could briefly see something 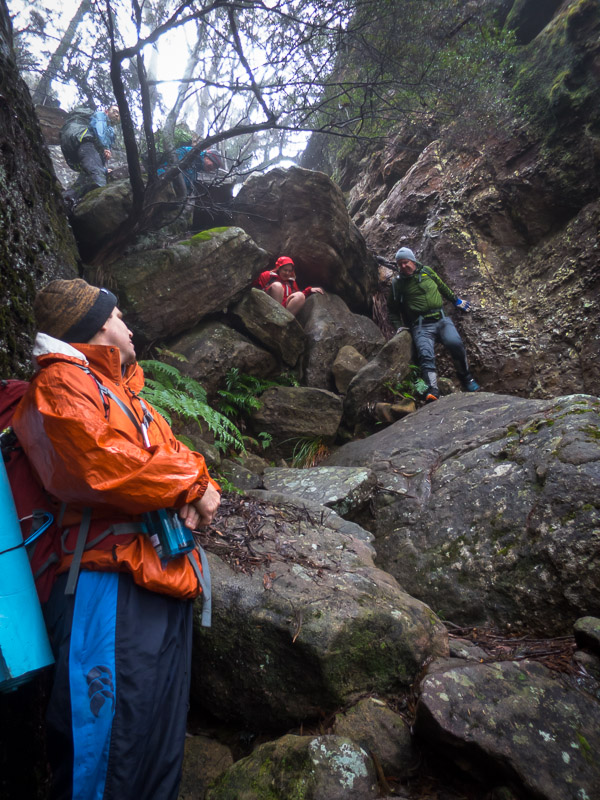 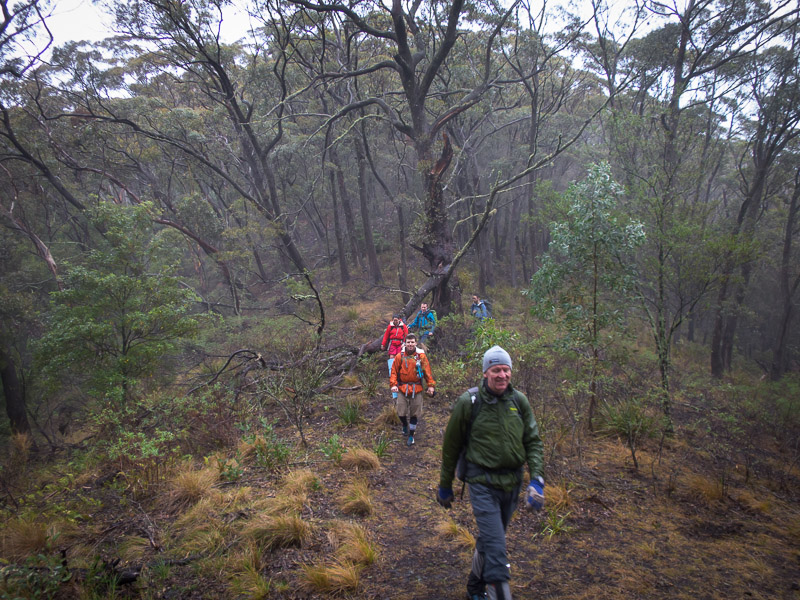 Geoff & I had similar motivations for doing the walk. We’d both done K2K in a day in recent years and had loved the ridge walking but wanted to redo it with more time to appreciate the views. The others hadn’t done the full route so were just wanting to experience it for the first time. We’d all been as far as Cloudmaker before so I wasn’t too upset about the cloud since we’d seen those views before. My dreams of having lunch in the sun near Mt Moorilla Maroo taking in rarely seen views was not to be. With the cloud still very low we settled on lunch at Dex Creek. Our spirits were buoyed when we saw glimpses of blue sky in the direction we were heading – the cloud was lifting! We were so cold though that most of the party was packed and ready to go before Jo had even finished eating her lunch. 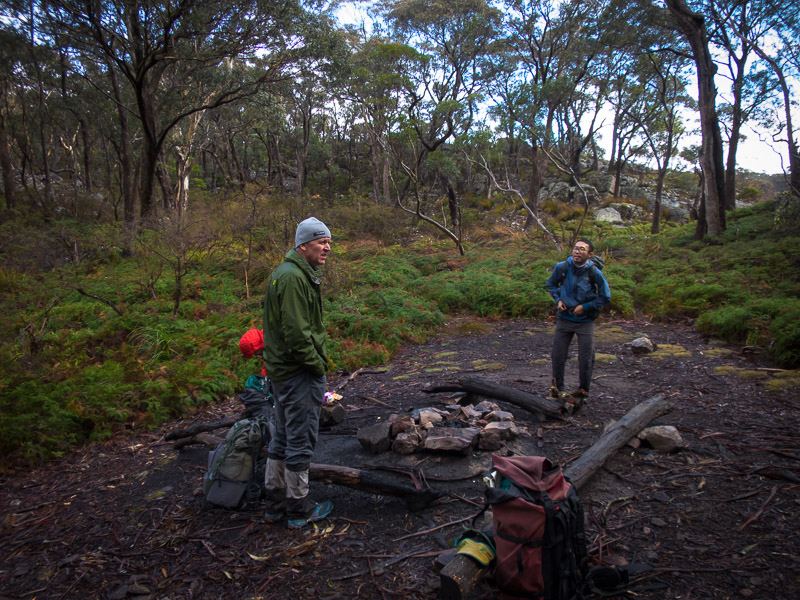 Sadly the lifted cloud didn’t last long and we were soon back walking in the midst of it. The navigation between Dex Creek and Mt Amarina was surprisingly straight-forward. The foot pad was pretty clear to follow other than one spot near the Eastern end of the Cloudmaker summit ridge. Possibly everything being wet made it easier to see on the ground. 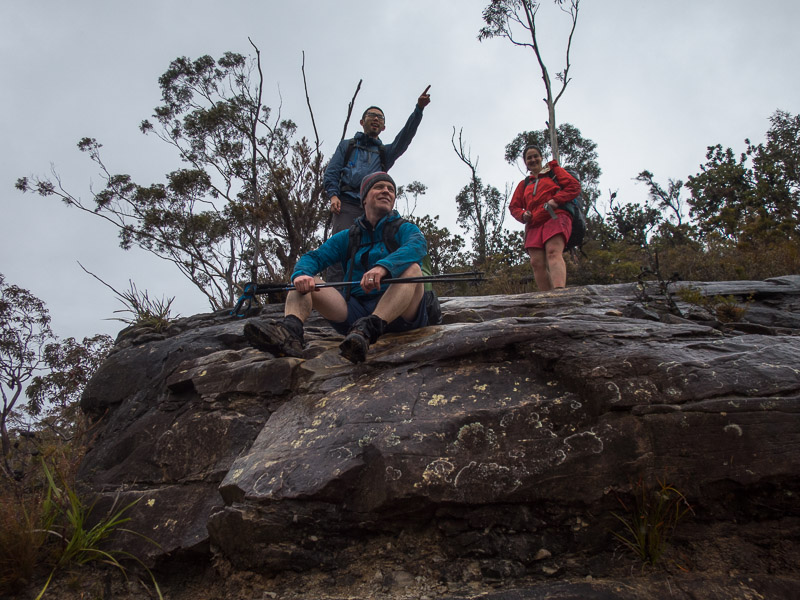 Pretending we can see anything 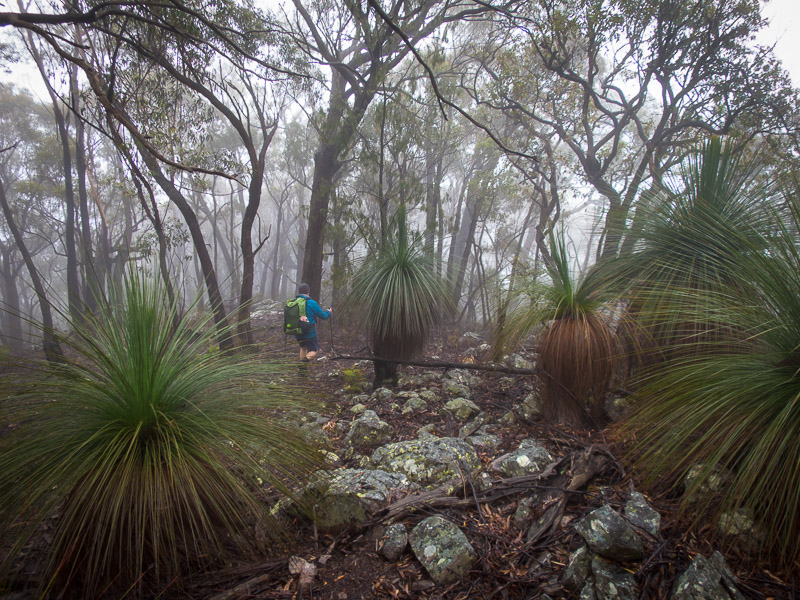 By the time we got to Mt Strongleg we were no longer walking in mist so we had a break to take in some views. Then it was the steep descent down to Kanangra Creek. Reports from the previous week had said there was no flow in the lower section of the creek. We deliberately aimed off on the spur to the NW at the bottom so we’d hit the creek high up where it was more likely to be flowing. 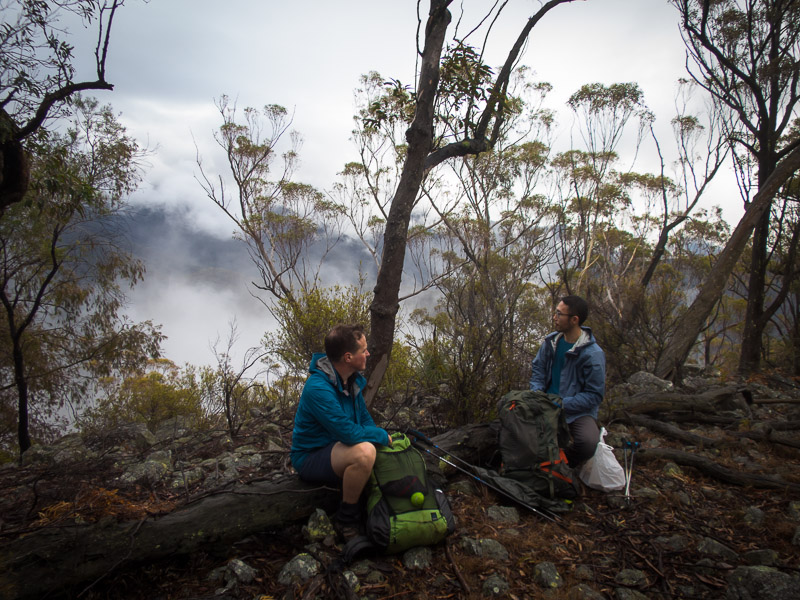 Taking a break before descending Strongleg 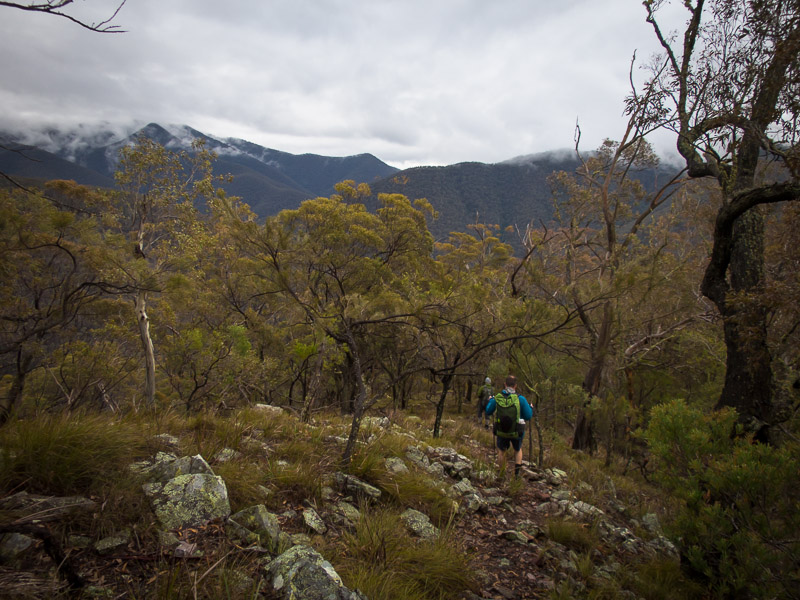 The cloud started lifting as we descended

We hadn’t needed to worry – Kanangra Creek was flowing strong and clearly right until the junction with the Coxs River. I was quite surprised, as while there had been a bit of rain in the previous week and a dump the night before, the creek gave no indication it had been dry only a few days earlier. 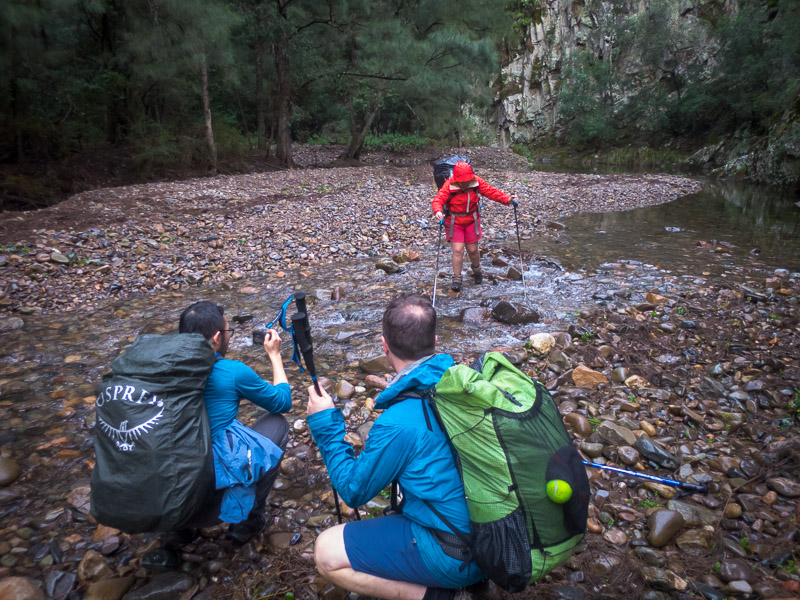 The trials of being chased by the bushwalking paparazzi 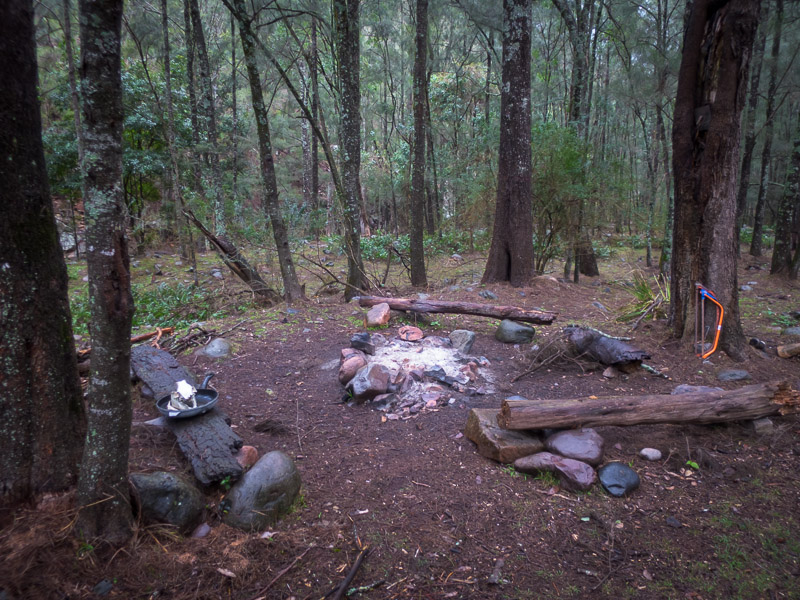 The other reason I’d wanted to do this route was to camp at Konangaroo Clearing which I hadn’t done before. It’s a very large space but fairly undulating so a few people took a while to find the right spot for their tent. 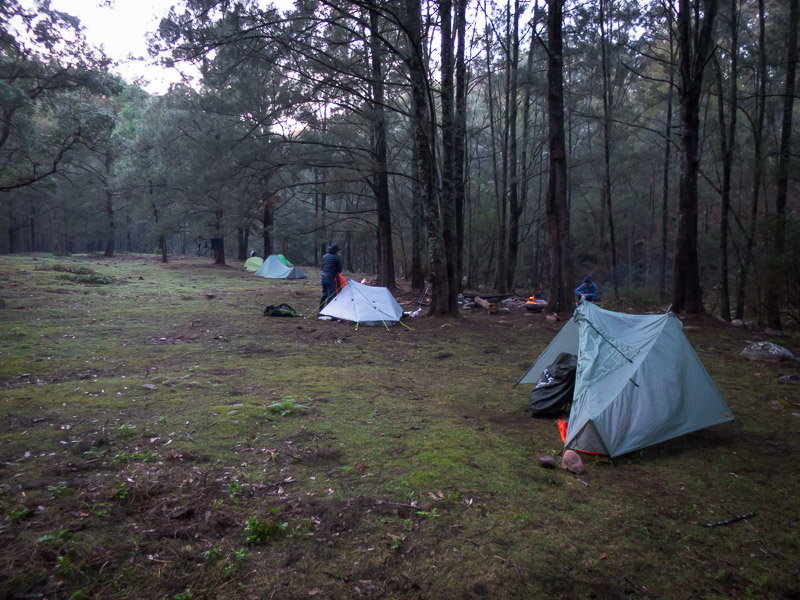 We got away from camp at 8am on Sunday with crossings of Kanangra Creek and Coxs River to immediately challenge us. 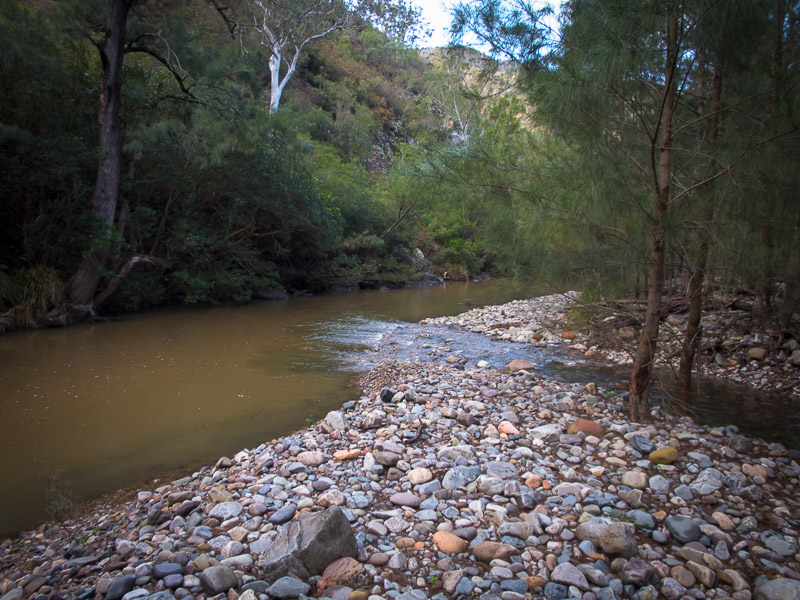 Unusually for me I went for a crossing with shoes on as the Coxs was murky and knee high at the deepest. I’d spent all of the previous day with wet feet so I figured my socks and shoes were already damp. Half the party gamely went for the bare foot option. 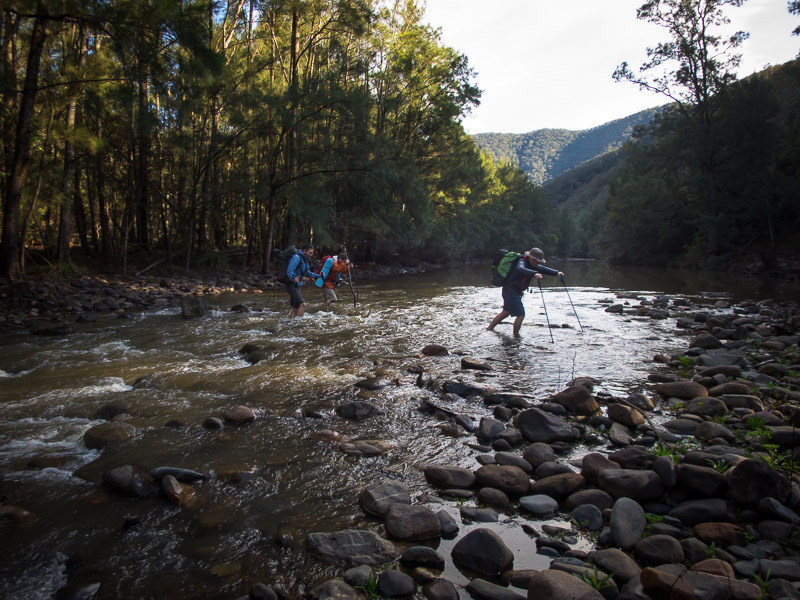 1.5 hours later we were all at the top of Mt Yellow Dog happy to see the sun and feel a bit of breeze. The large cairn which had existed there last year was no more. 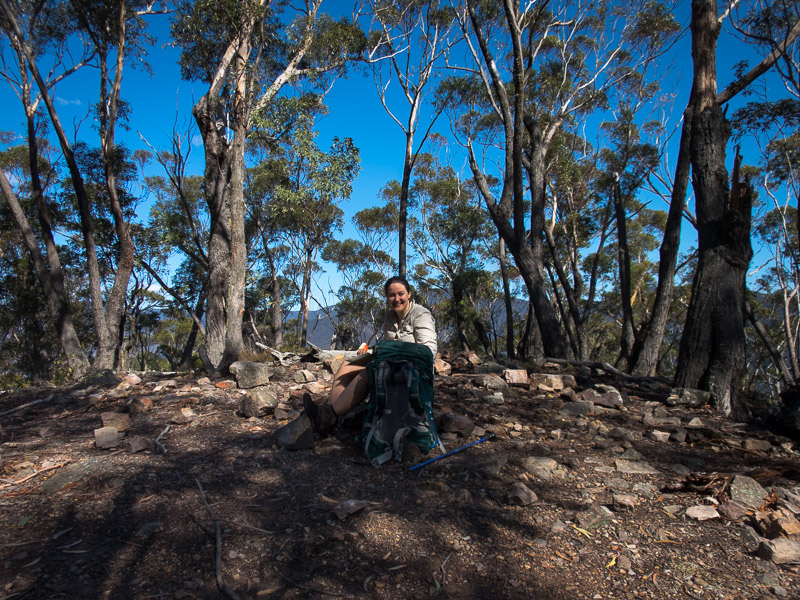 From Mt Yellow Dog the route was straight-forward if becoming more painful by the kilometre. A day and a half of wet feet wasn’t doing my feet any good and I was looking forward to lunch and a chance to dry them off. 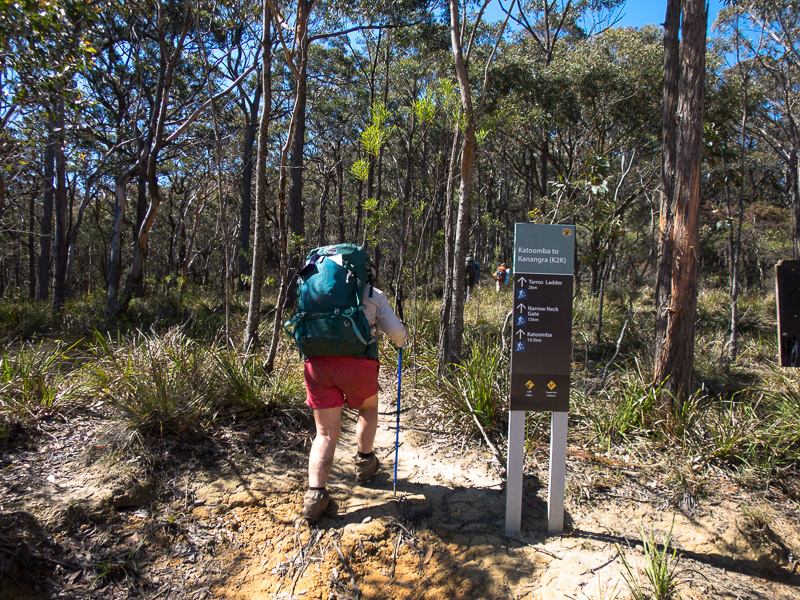 We decided we needed some views for lunch since we’d been so deprived the previous day. So we had a late-ish lunch above Tarros Ladders. Everyone handled the ladders well – even the one party member who didn’t like exposure and didn’t realise he had to climb spikes until I mentioned it at morning tea… 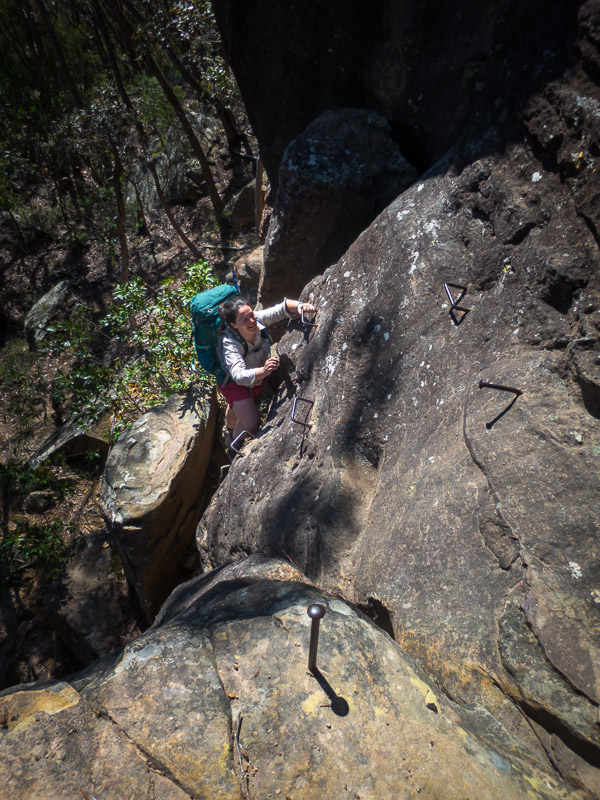 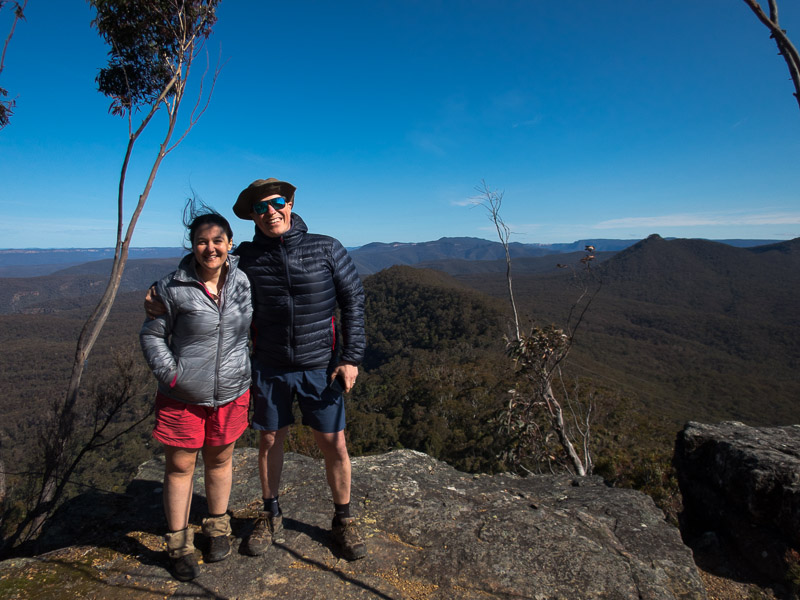 Jo & Jon with our route stretching out beyond them

I should have done something with my feet after lunch but didn’t so the Narrow Neck fire trail bash was not the most fun I’d ever had. Final count was a bleeding left heel, blisters under 3 toes and weird blotchy swollen ankles. I was in a much better shape after K2K in a day! Nonetheless we all survived and had a good time despite the weather. 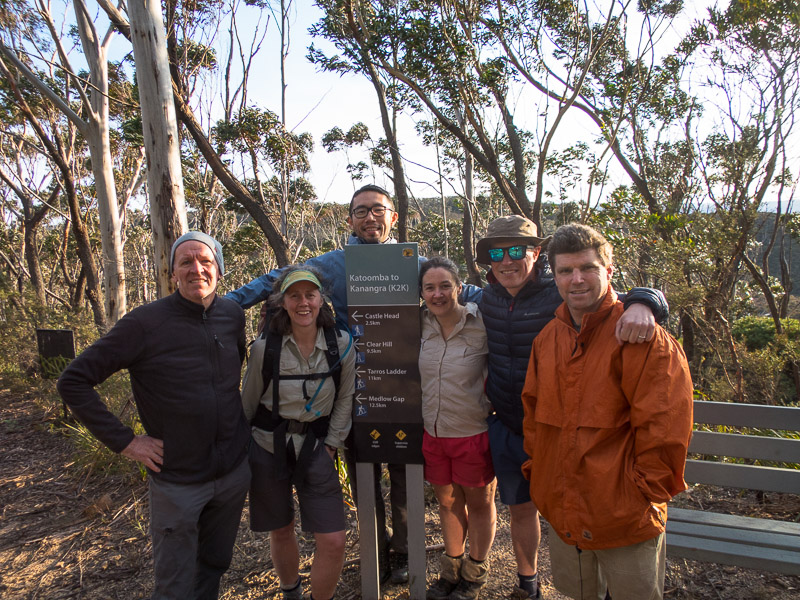 Tom came down to meet us as due to a traffic snarl in the Harbour Tunnel on Friday night we hadn’t managed to get two cars out to the locked gate. We were happy to get into the packet of chips he produced! Then we reconvened at the pub in Katoomba for a celebratory beverage and some well deserved food. We were an amusing (?) site leaving the pub as we hobbled in our various ways back to the cars. A fun weekend but I think I’ll be doing a bit more training before my next K2K endeavour!