We’d been thinking about the Douglas Range Traverse for a few years. We decided this was the year, and having a read a bit about the “high route” we thought it was definitely up our alley. After all, we love scrambling routes, particularly if it means you can bypass a 700m ascent/descent (the alternative if you go the “low route”).

John Chapman, well-known Australian bushwalking guidebook author, had published some notes for the high route. Having used JC’s notes for the Western Arthurs and Frenchmans Cap in the last couple of years we were familiar with his style, and had some gauge on how our walking times correlated to his (including breaks we were generally about the upper end of his estimates). We took on his advice to allow extra days to give us the best opportunity of good weather for the crux days.

Having booked everything in September we were then beholden to the weather. I tried to avoid looking at it in the weeks leading up – particularly given how inaccurate we’d found the forecasts in the preceding two weeks. I allowed myself some cautious optimism when it seems a slow-moving high was due to arrive on Christmas day. All I could say to people was “the forecast was about as good we we could have hoped for”… knowing all the time that once we started we wouldn’t have any way of getting any updates (other than from other walkers). 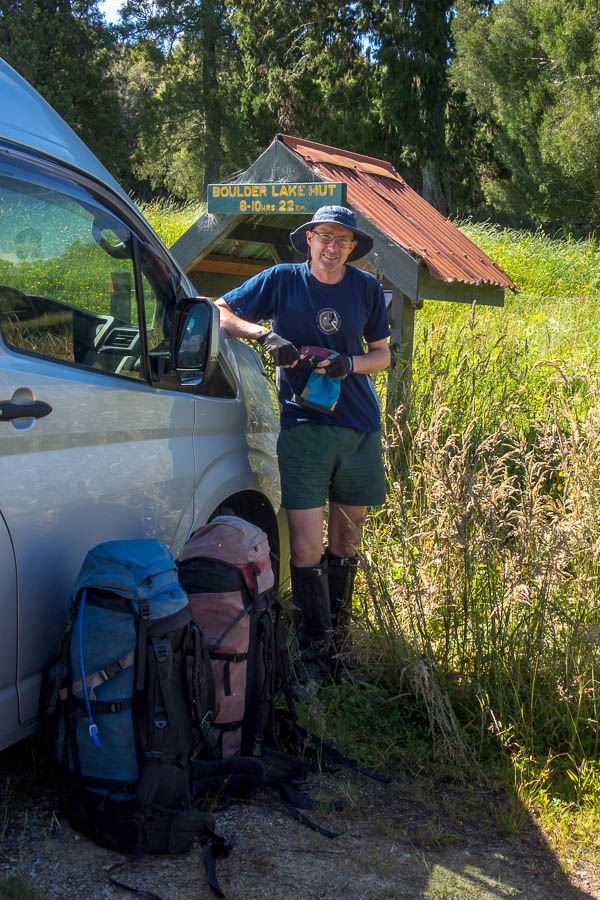 Someone inconveniently left a van in front of the starting sign!

So laden with 9-days of food, Tom’s fancy camera, and 3 litres of water each (! this is NZ!) we were dropped off at 10:30am the trailhead for Boulder Lake. Needless to say our packs were on the heavy side. And it was forecast to be a hot day.

The most challenging route-finding of the day was the first 50m, but soon we were on track. Plodding would probably be the best description of our movement for the day. The trail wound its way through 7-foot high manuka for much of the morning. This is not high enough to give any shade, but high enough to keep out any breeze (not that there was much). It felt much like a sauna.

The interesting parts of the day were the limestone karst country – crossing numerous deep slits in the ground. And I saw two pigs, and heard/smelt plenty of goats. 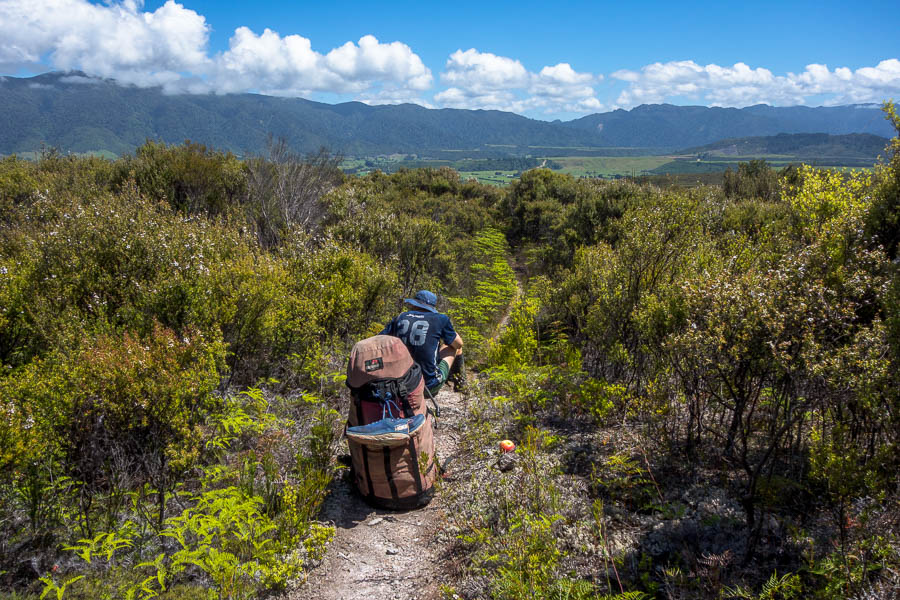 As we approached Beatham’s Clearing Tom declared there was no way he was going any further. I agreed. Perhaps a sign of how fatigued we were, we got to the “Water” sign – and rather than even walk 5m down the side-track to see if that was where the camping was, we decided to keep walking. We probably only went 5 minutes, but it felt like a lot longer before it became apparent there was no camping coming up. I felt like a complete idiot when I got back to the “water” sign to find that looking from the other direction on the track you could pretty much see the clearing. Anyway, we were there, no one else was. There were some water sumps. We didn’t have to go any further.

There was a well-trod path beyond the sumps, that I was doubtful would yield any better water, but we followed it anyway. Down, down, down we went, we did find some flowing water. (After all looking for water is probably a skill set we utilise a lot more than the average NZ tramper). Somehow we managed to siphon 4 litres out of a very small pool that the water was trickling into. Didn’t realise Tom had that trick up his sleeve. So armed with drinking water for the next day we used the sump water for cooking (not that I think it would have been problematic for drinking). We were both feeling pretty average and dinner had to be forced down – if only to reduce the weight on our packs! 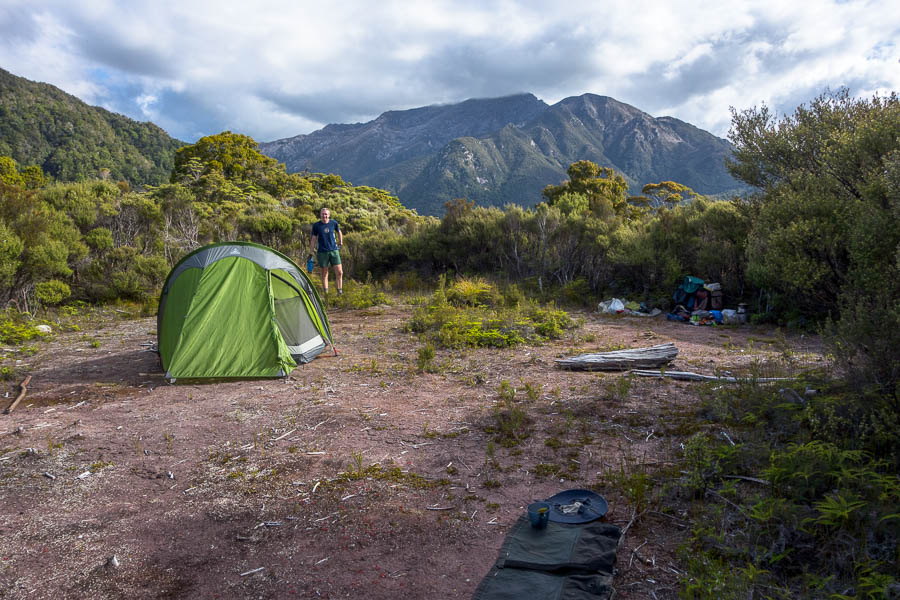 I slept like a log unsurprisingly. Tom was also feeling a bit better so it was back to it early to try and beat the worst of the heat. The forest was taller in this section so we weren’t directly in the sun like the previous day. 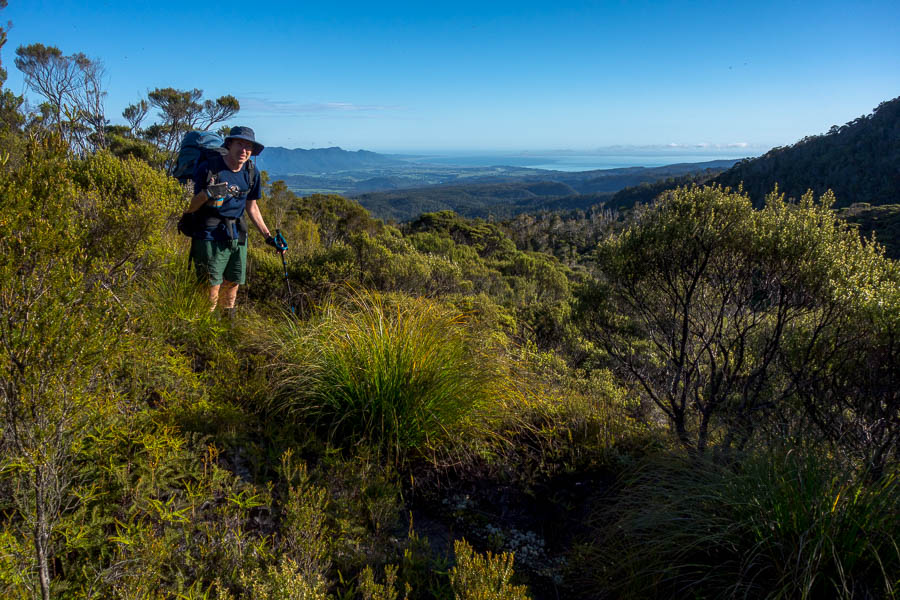 Views back towards Farewell Spit

It was another beautiful day and the views from Cow Saddle were outstanding. 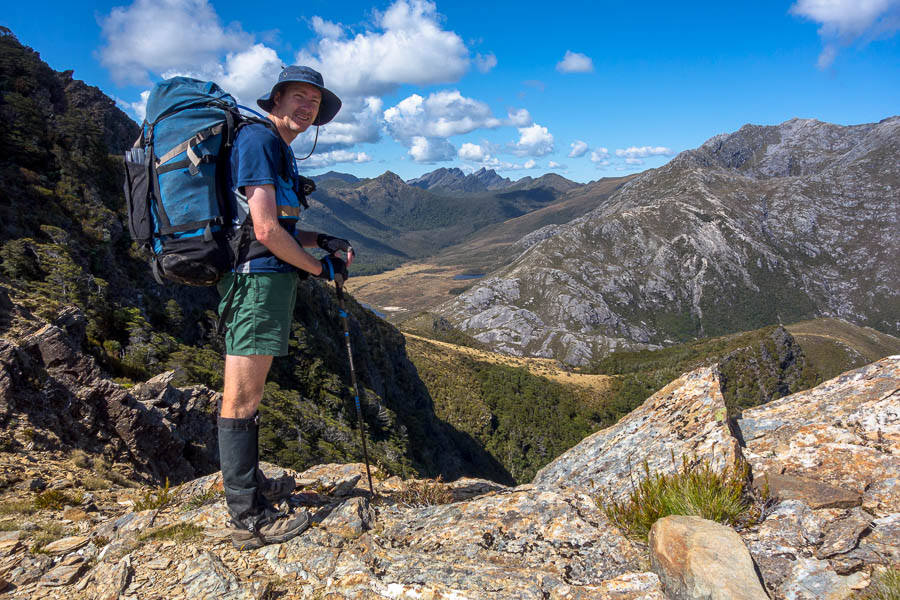 Tom had read a few things which suggested the sidle below Brown Cow was a bit dodgy. JC barely mentions it, so I wasn’t expecting anything much. Admittedly we had perfect conditions but it was nothing of concern to us. Like most things it could be a bit more daunting in torrential rain and wind. 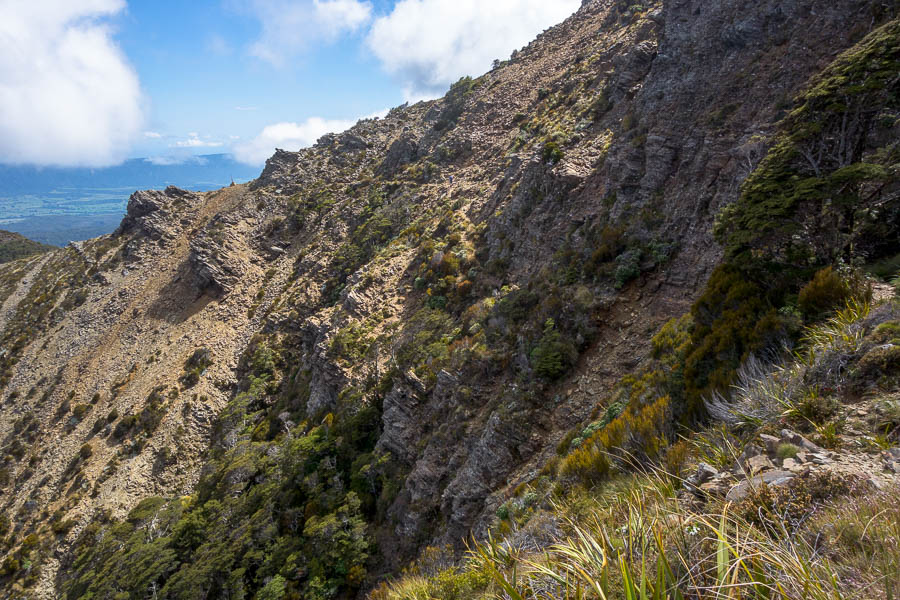 Traversing below Brown Cow. You might (just) be able to make out Tom on the track 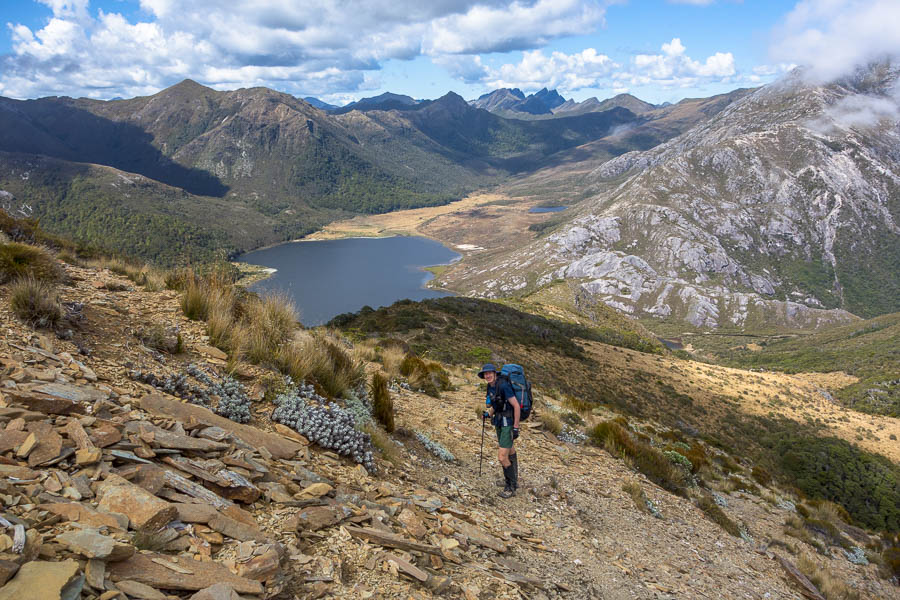 After the long, tedious descent to Boulder Lake we decided we should do the side trip to the lake outlet. I stumbled into someone’s campsite as I turned off the track. My guess was he had got in very late the night before having mis-estimated against the DOC times – given he was only just packing up at 11:30am!

The side-trip was worthwhile. The old dam wall was quaint, and the waterfall below it was impressive (if hard to get a view of). We had a wash in the stream there, not realising there was an amazing waterfall and pool behind Boulder Lake Hut, before heading back to our packs and having lunch. I also scored a walking pole, which had been left sitting on the edge of the lake well away from the main track. 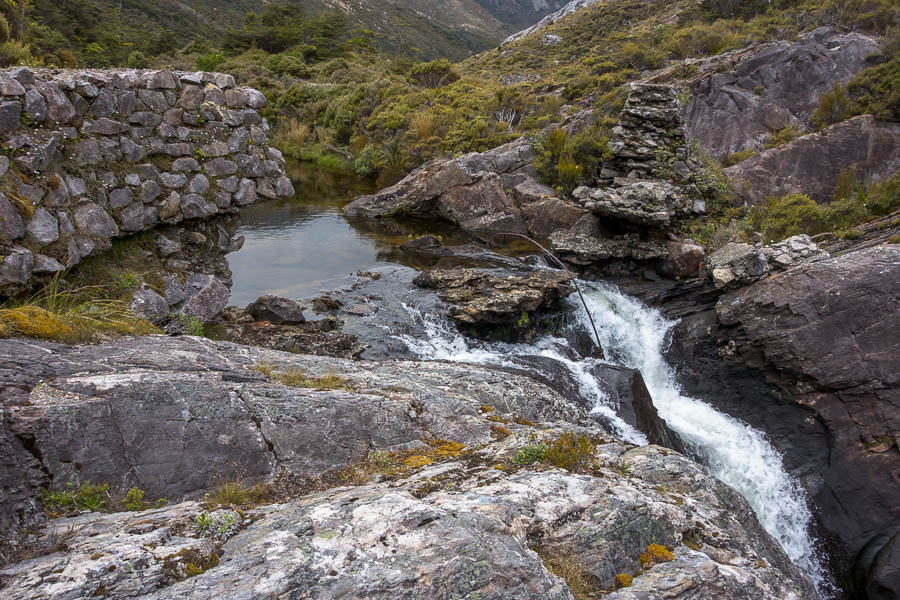 The old dam at the outlet of Boulder Lake

Arriving at Boulder Lake Hut at 2:30pm there was a couple either just arriving or just leaving – turned out to be leaving. They had also mis-estimated the effort to get in, and so were splitting it up on the way out.

As if on cue the rain started just as we arrived (and they left). We thought we might have the hut to ourselves, but a group of 3 local women arrived later so we enjoyed the evening with them – even if our internal thermostats were very different. They decided to light the fire, after we’d had the windows open all afternoon to try and cool the hut down!

It continued to rain on and off for the rest of the evening, at times quite hard. We all went to bed quite early and I’m not sure if I was the only one still awake when a solo walker arrived just on full dark. She must have been very relieved to get to the hut after what I’m guessing was a very long day. 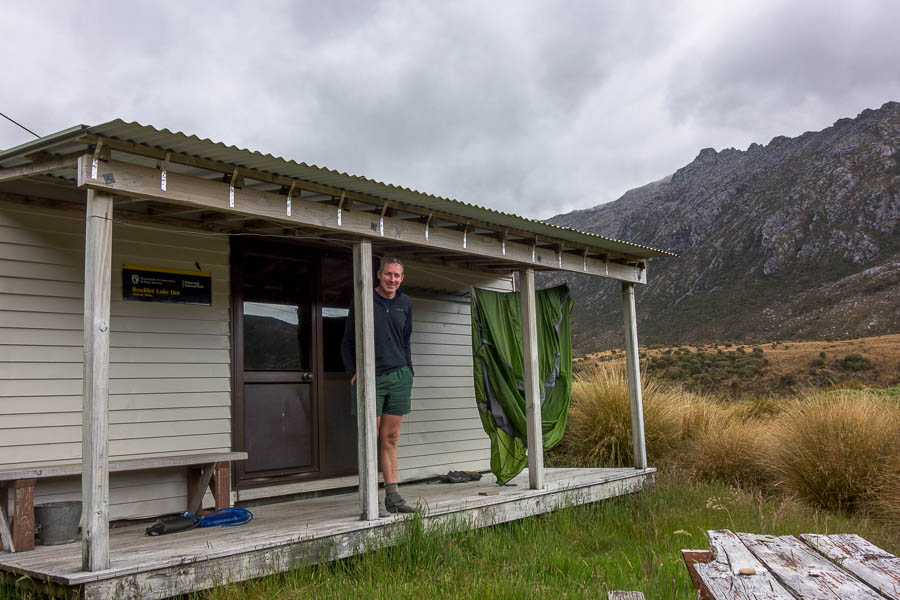 Boulder Lake Hut – the only hut we slept in

We were up very early, and decamped to the verandah to try and avoid disturbing the other 4. We knew it was going to be a wet morning as our first task for the day was making our way up a tussock filled valley. My newly acquired walking pole was invaluable here allowing me to prod for all the holes that exist between tussock. 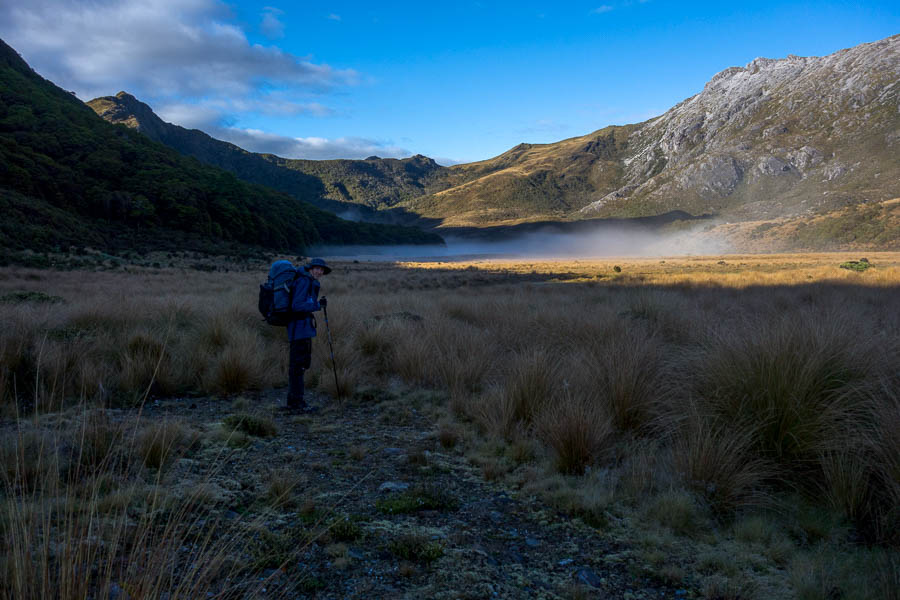 We’re heading towards the saddle in the distance. What you can’t see is the tussock is saturated after rain the night before.

Once we started up the ridge out of the valley a foot pad became clear and we slogged our way up before, what became a regular occurrence, of “first” morning tea. Our feet were saturated so we gave them the chance to dry out even if they had to go back into wet shoes and socks afterwards. 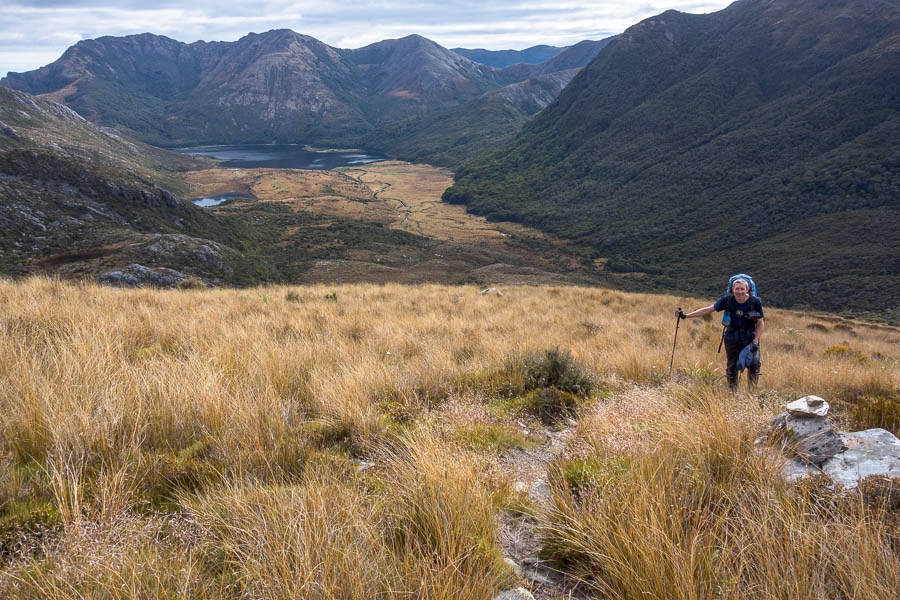 Almost at the saddle. Lower half completely soggy.

We thoroughly enjoyed the next section of ridge, a bit scrambly, amazing views and once again great weather. The narrow ridge definitely reminded me of the Western Arthurs. Second morning tea was taken after the narrowest section of ridge where we could appreciate the views looking back over what we’d traversed. 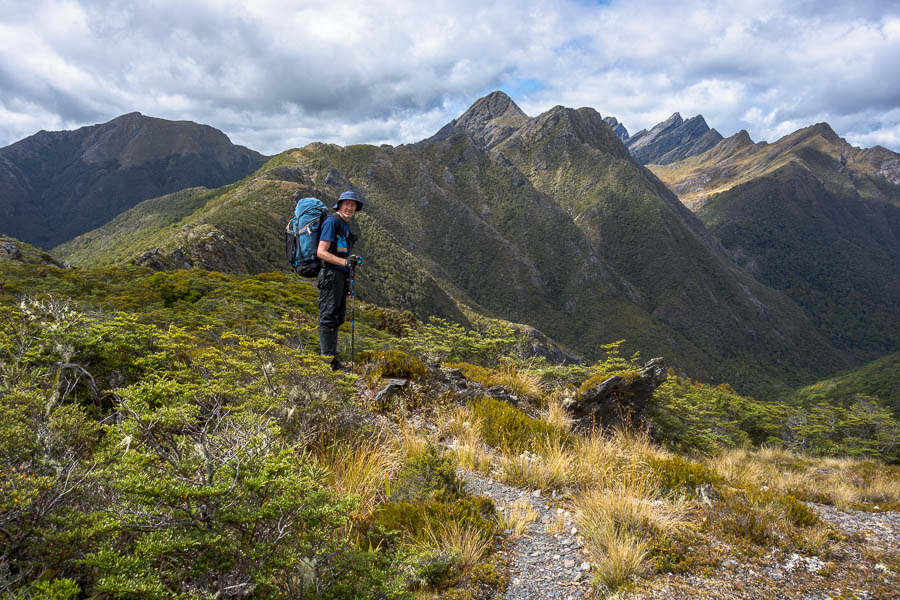 Dragons Teeth are getting closer. The next part of the route follows the ridge line.

The next goal was the Eye of the Needle – the pass below the Needle that leads to Adelaide Tarn. Thinking we could see it from a long way out, we were pleasantly surprised to find what we’d thought we were aiming for was much further away than where we were actually going! Many things I’d read in advance had suggested getting into the Eye was tricky. Maybe the footpad used to be more indistinct, but we didn’t have any issues (once we’d worked out where we were!). We got over Needle Pass and got the views of Adelaide Tarn with the Dragons Teeth looming behind just before the cloud descended. 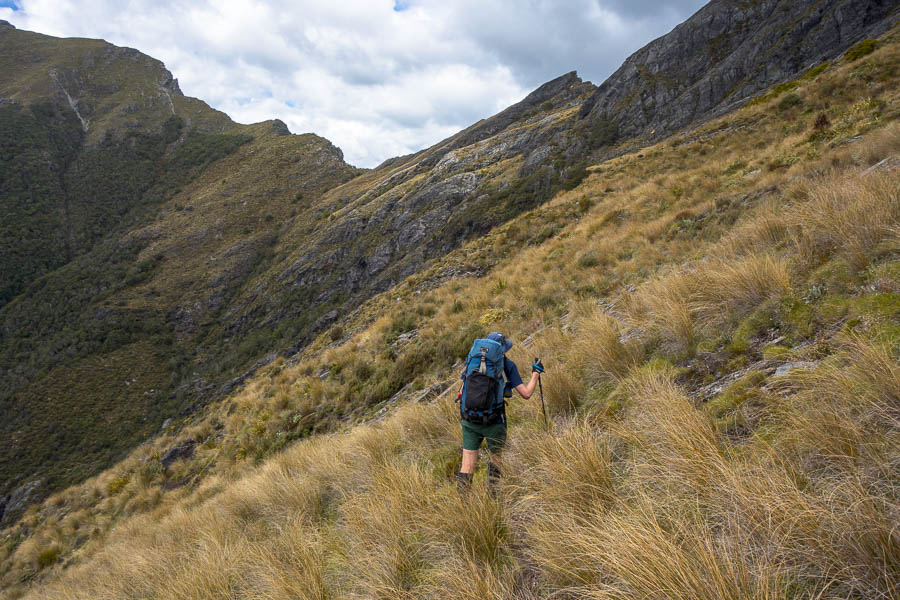 Nearing the Eye of the Needle 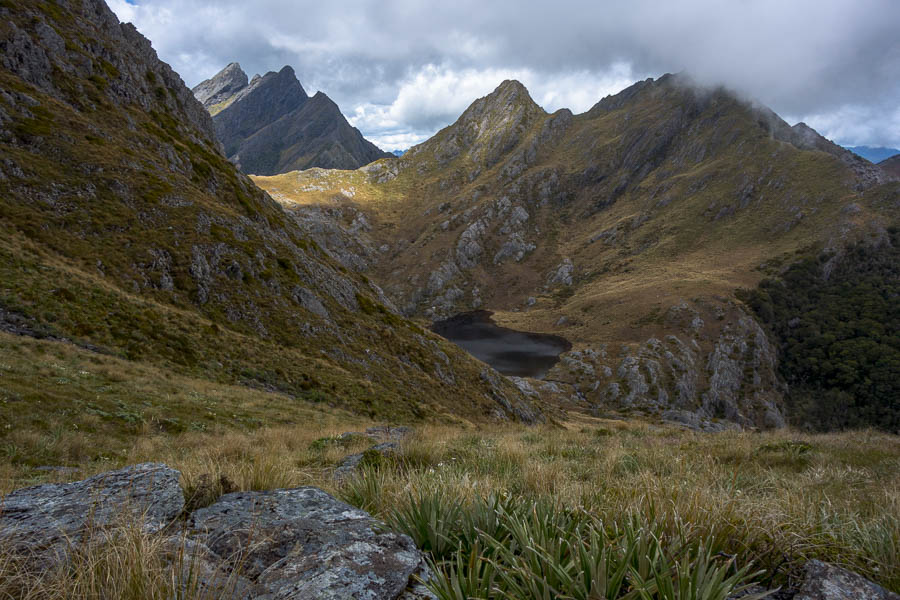 The rest of the afternoon was pretty gloomy. 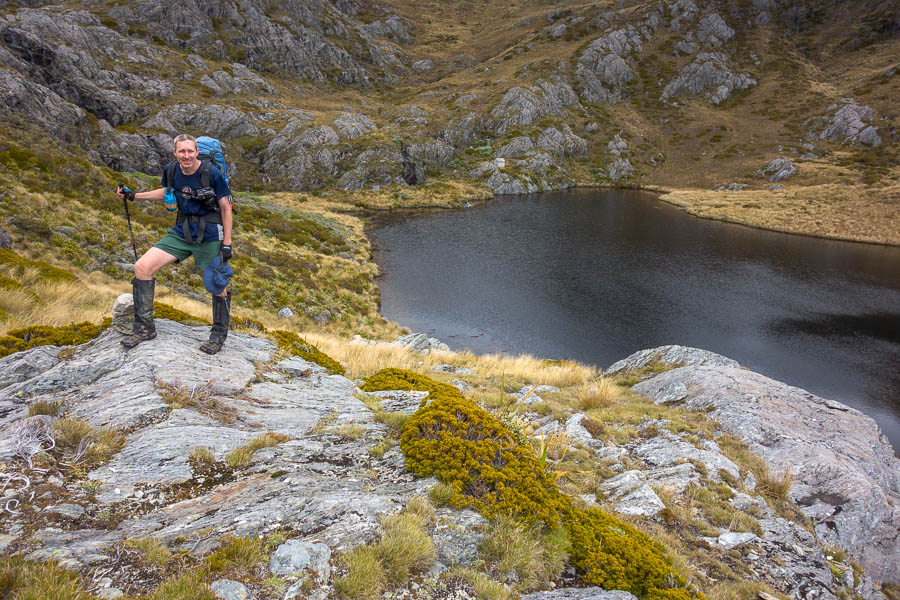 Adelaide Tarn Hut is a tiny 4-bed tin hut. The bunks are old-style with metal mesh for the mattresses to go on – and if you’re more than about 5ft 5 you’re going to struggle to fit on them lengthways. Having seen the interior of the hut we didn’t take long to decide we’d camp – which was to Brenda’s benefit when she arrived a few hours later. She ended up with what looked a very comfortable set up (double-mattresses and being of a suitable height). 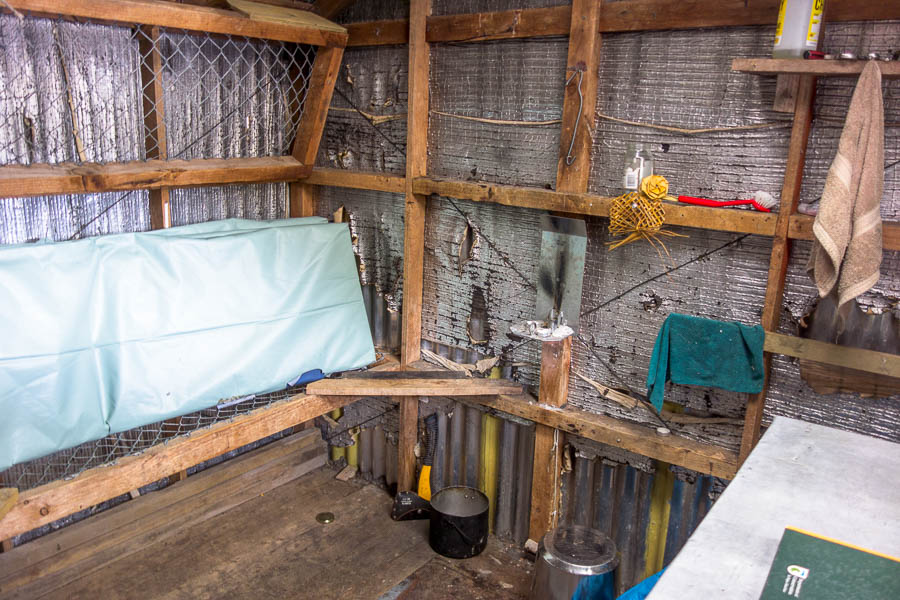 The inside of the hut was rustic.

I didn’t particularly enjoy hanging out at Adelaide Tarn. The hut is perched on the edge of the tarn, with the toilet above it. The area immediately around the hut and toilet is very muddy which makes it difficult to go exploring once you’ve taken your sodden shoes and socks off. Apparently there were nice campsites near the outlet but we didn’t get over there.

If it had been sunny I could see there were some nice swimming options (I did have a brief dip below one of the waterfalls). So, all in all, I was very glad that the weather was such that we weren’t needing to sit out one of our extra days there! 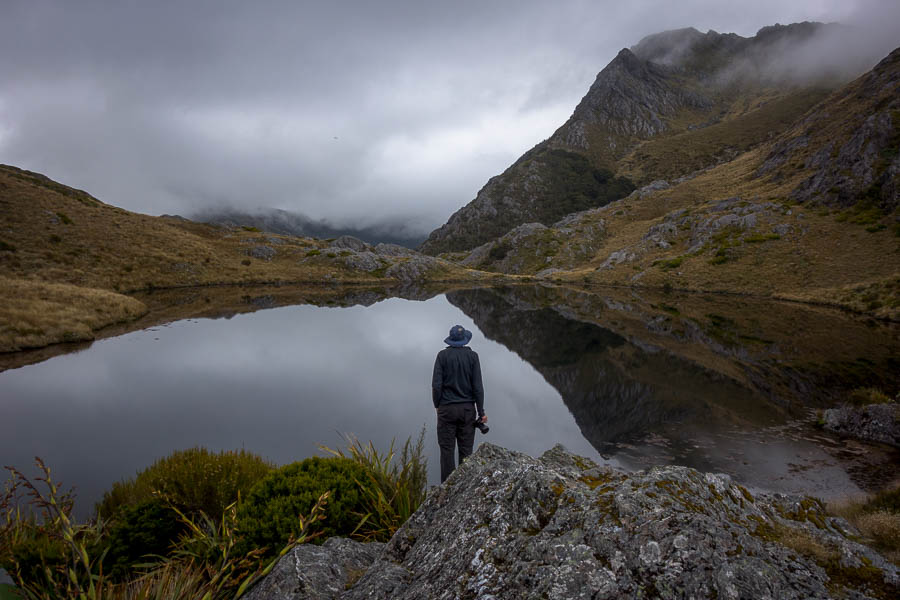 Continue to read about the next 3 days…