Another week, another walk. This one had been overshadowed in the lead up with a not-so-bad that it should be cancelled, but not-so-good that it should definitely go ahead, weather forecast. In the end Tom decided it would be more work to try and come up with an alternative and we’d just dice with the rain.

It was raining when Jon picked us up at 5:45am which along with the early start wasn’t promoting positive feelings. But by the time we arrived in Mittagong, with plenty of time for a coffee, it wasn’t raining and things were looking up.

The highlights of this walk really came once we got to the cliffs lines – but that was a few hours walking away. During the morning the rain came and went but fortunately the scrub was a lot less intense than feared.

Tom’s recommendation to wear long pants had caused Jon a great deal of consternation before we’d departed but ultimately he had opted not just for long pants but also overpants. Despite this somehow I was in front for a decent period and by morning tea my trousers were saturated from the wet bush. 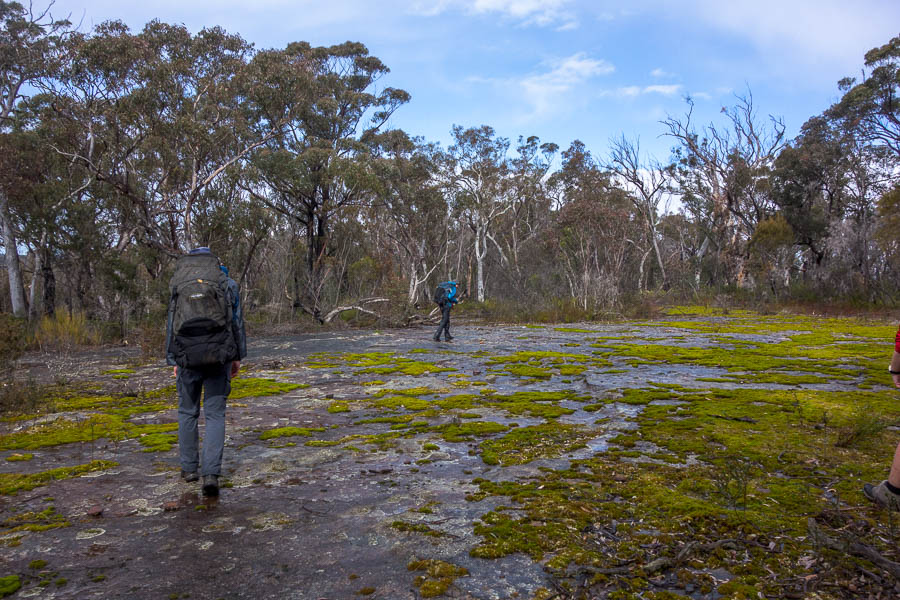 We were happy to get to some views for lunch, though the choice of lunch platform seemed to be a trial for some of the more cantankerous party members. Initially I was unhappy that the fine conditions changed to light drizzle as we started lunch, but then the most complete and intense rainbow I have ever witnessed filled the vista before us. Surely worth the damp for the spectacle! 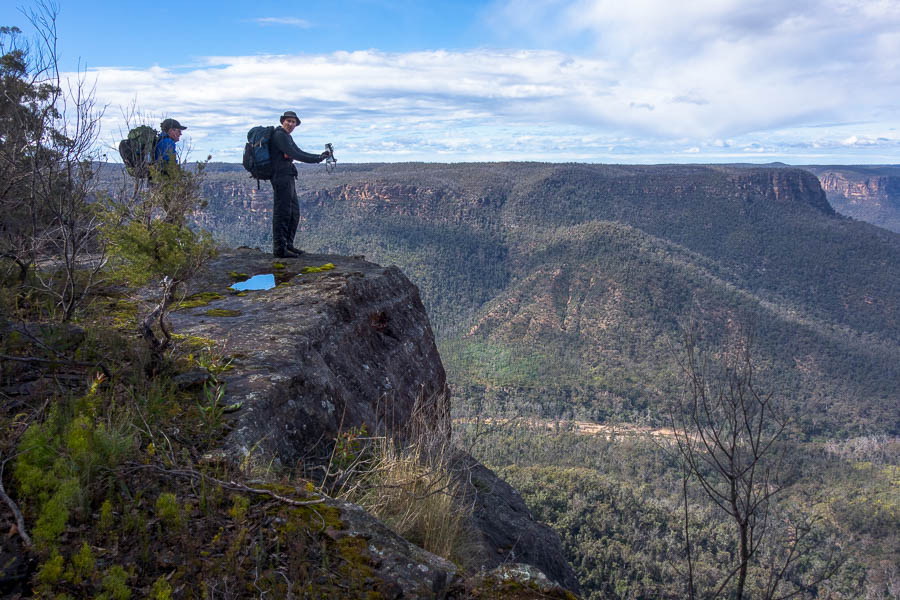 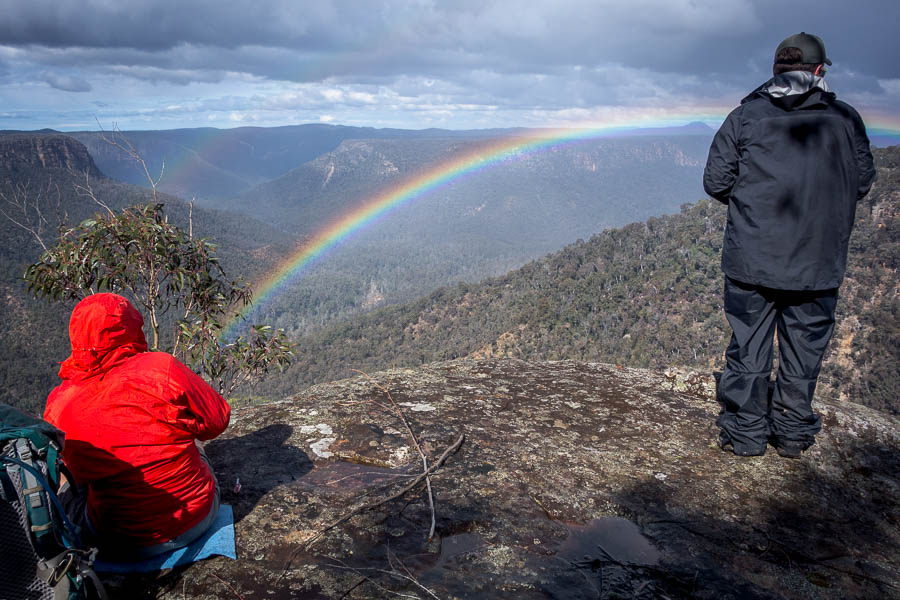 After lunch we explored the nearby ridge and then keen people went looking for a pass through the cliff line. 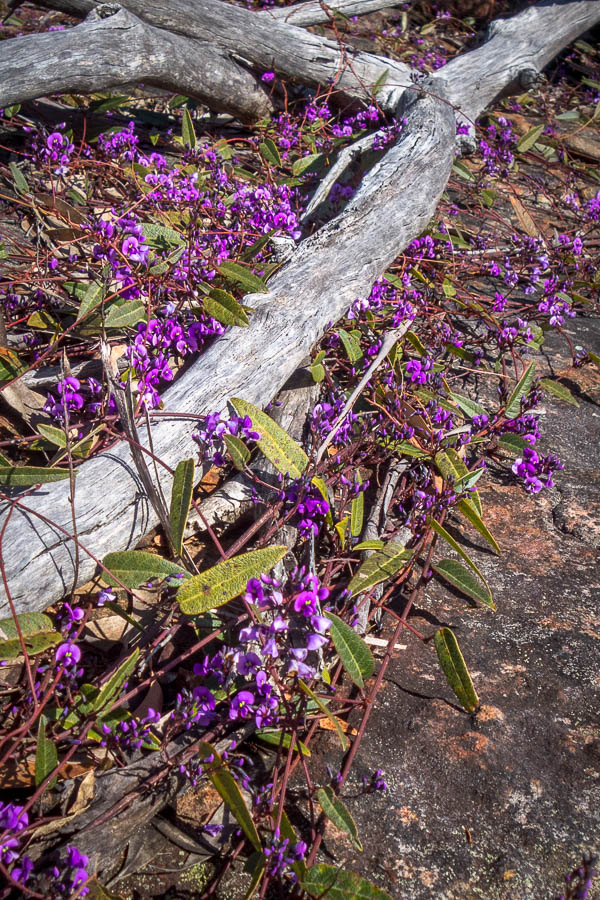 Hardenbergia was in flower everywhere 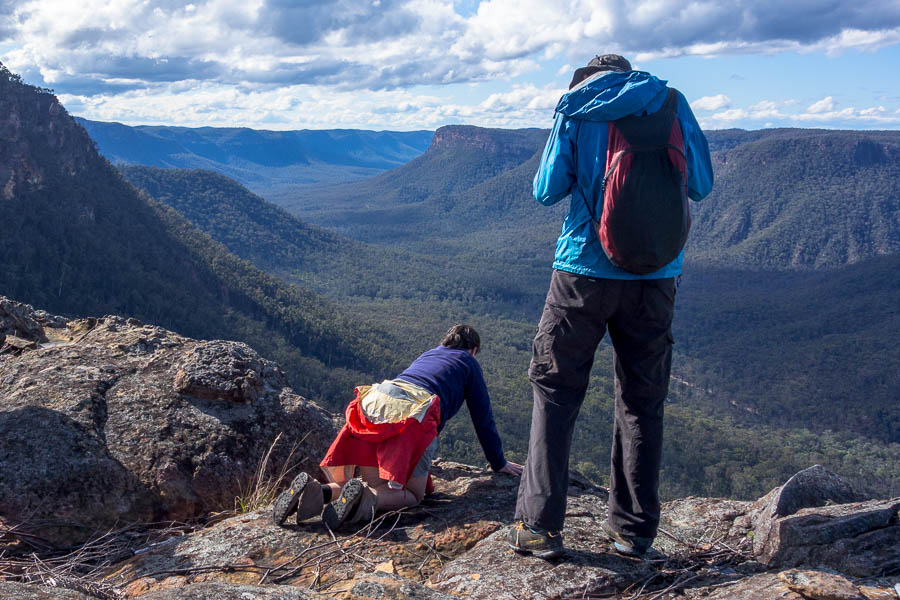 Jo checking out the drop 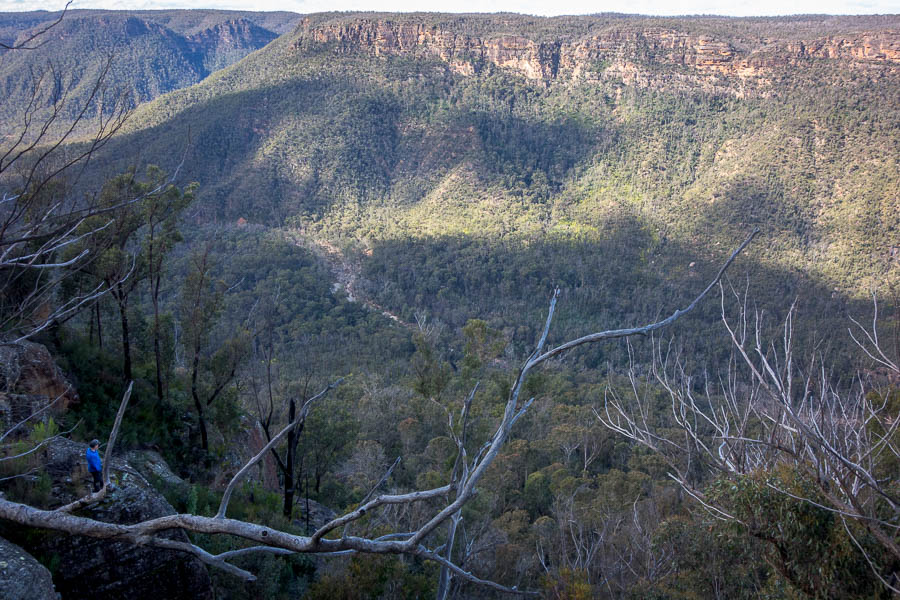 Eventually we regained our packs and headed off towards Surveyors Crag. The water run en route was a bit more effort than expected – for both the effort through the vegetation and the amount we had to drop to find water. Subsequently we didn’t have a lot of time to set up camp before we lost the light on the cliffs. Nonetheless the views were still spectacular for a jovial happy hour. 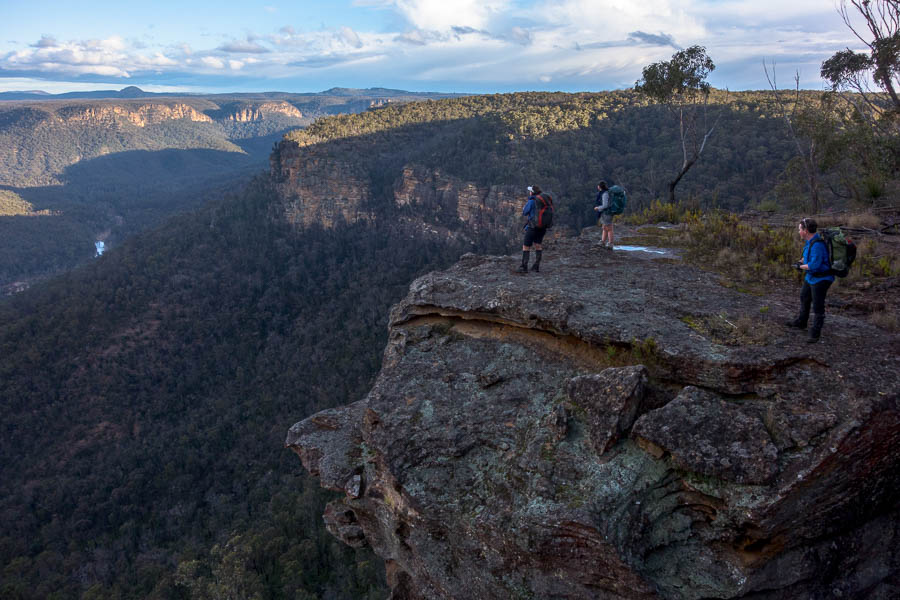 Views over the Nattai River 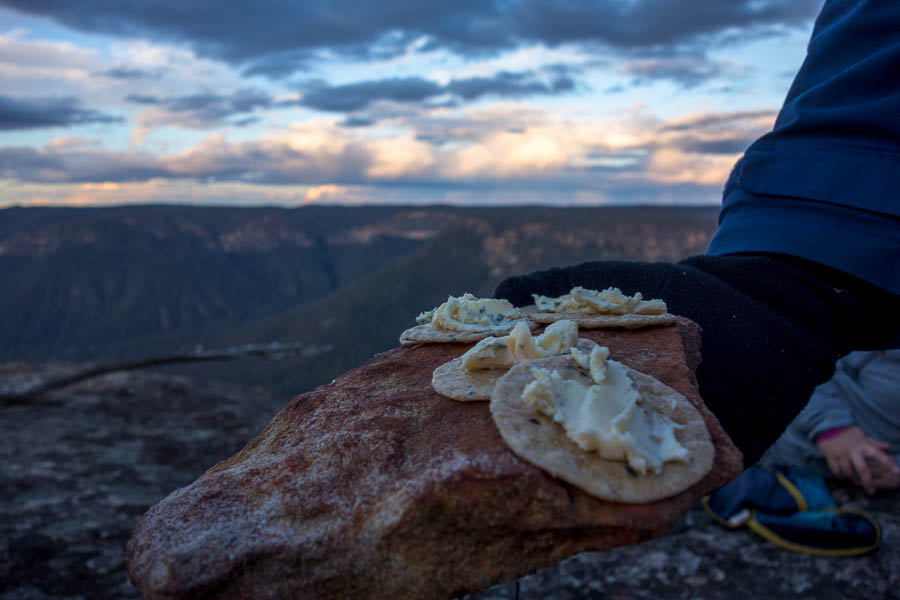 No expense spared for the dinnerware 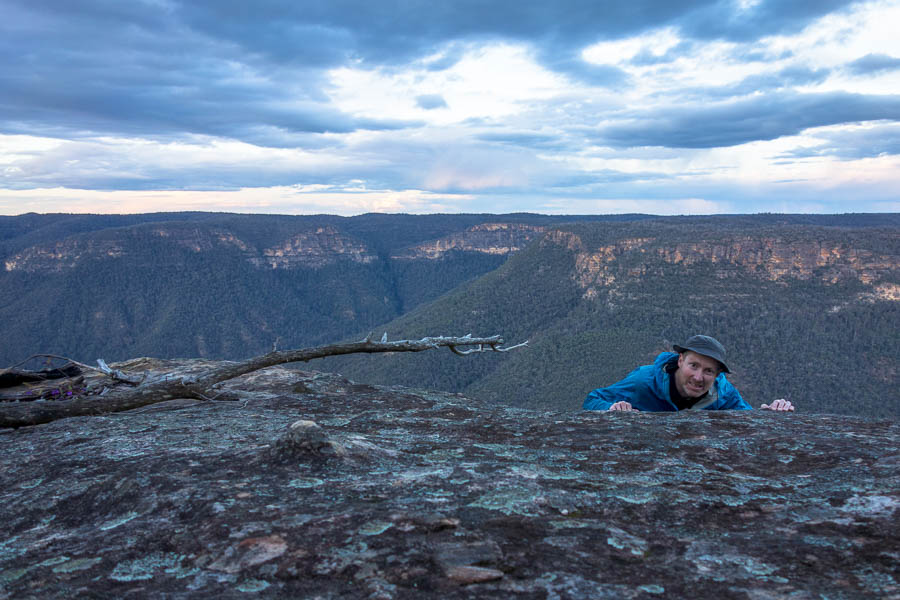 Tom sent over the edge 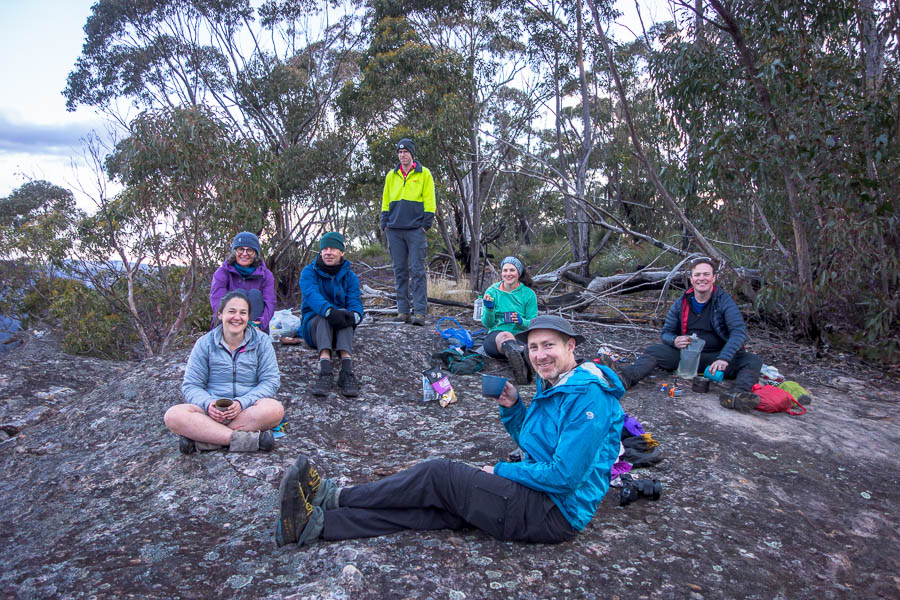 The team at happy hour 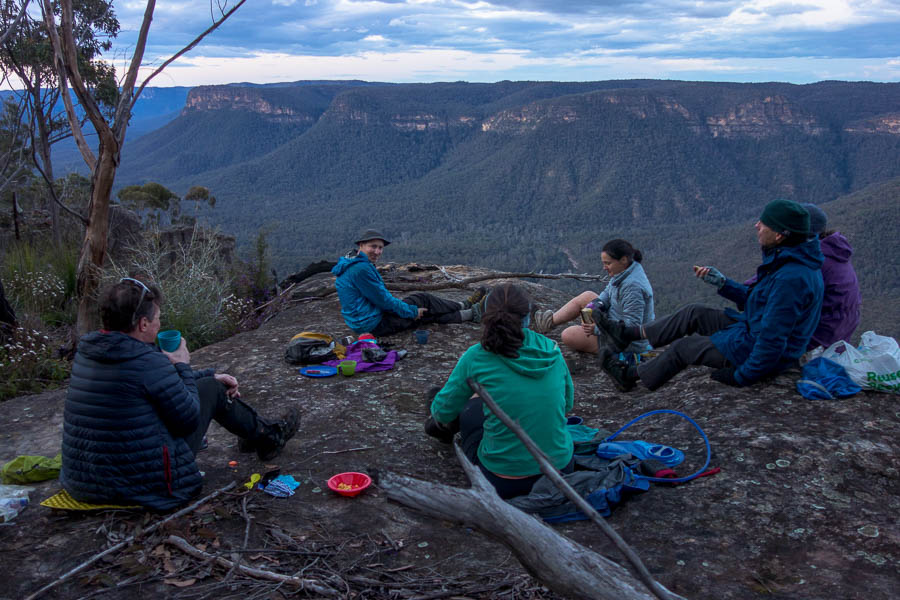 The view for happy hour

A late spattering of rain sent most of us off to bed a little earlier than we might have gone otherwise. While Jon had suggested a band of rain was on the way it seemed to largely bypass us, and along with a reasonably windy night, the tents were dry in the morning.

A few of us got up for sunrise and we had breakfast in our happy spot looking over the Nattai valley. 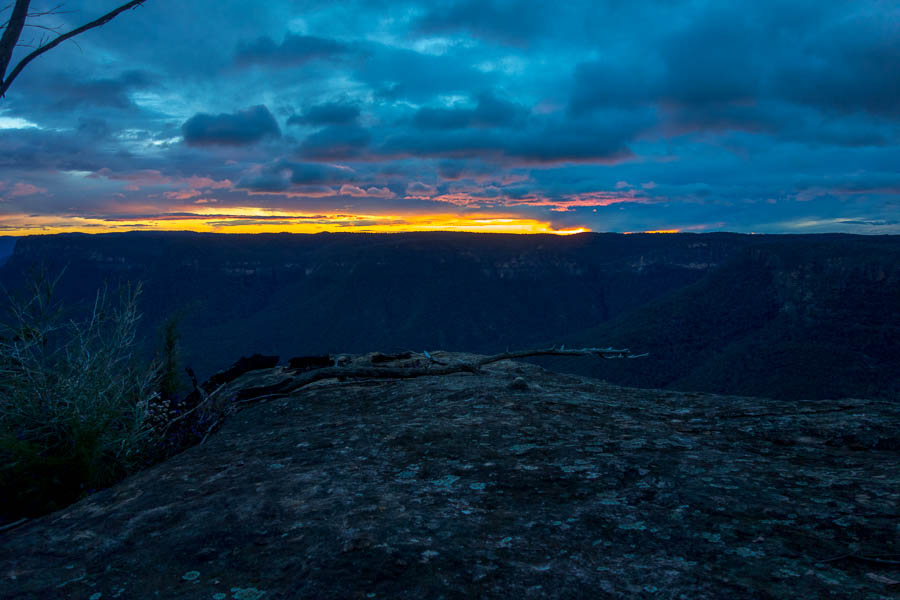 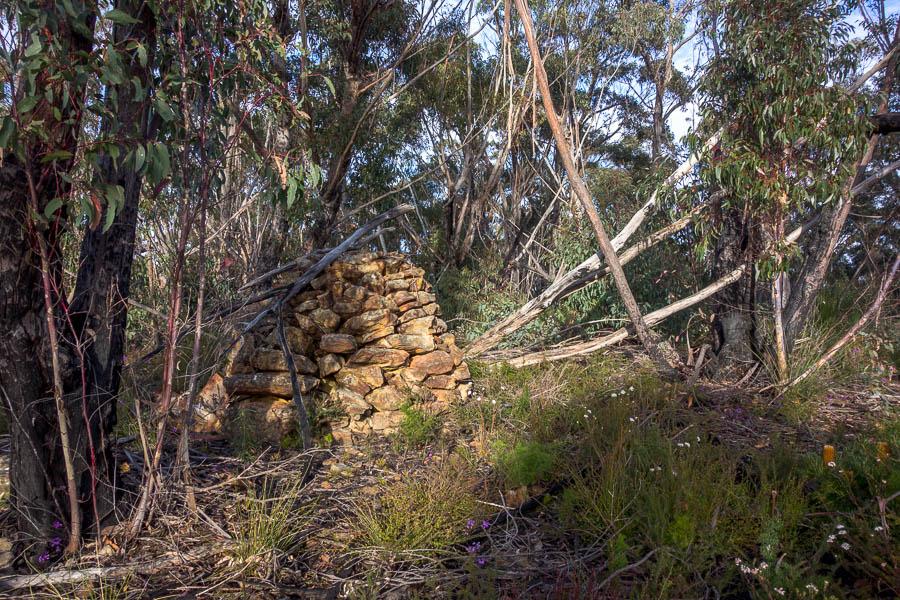 I had found the remains of the logbook container in the cairn when we’d arrived on Saturday afternoon but hadn’t had time to poke around for anything else. On Sunday I was surprised to find the logbook, unprotected from the elements, other than being inside the trig cairn, still relatively intact.* The logbook hadn’t seen much use – a total of two entries since it was placed in 1996! 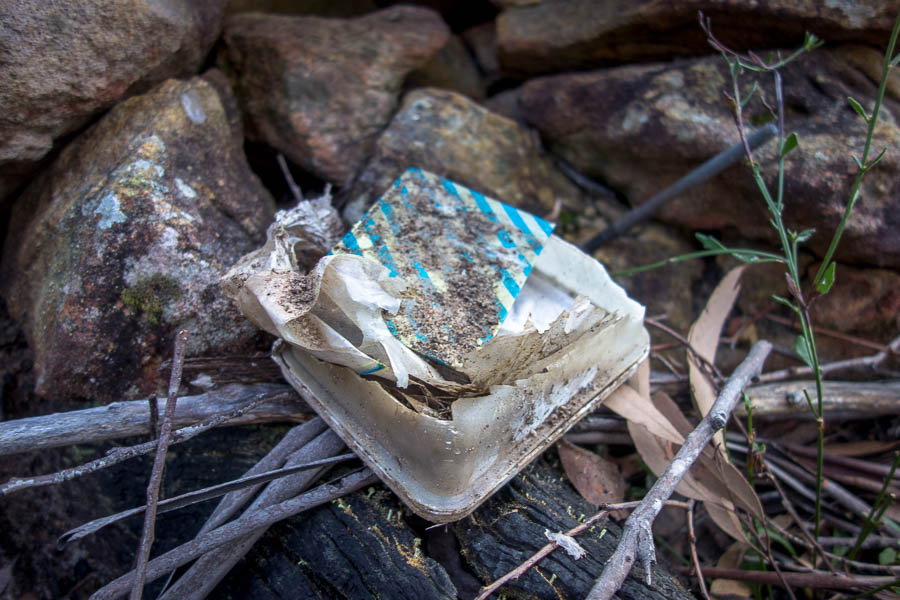 The logbook & remains of its container 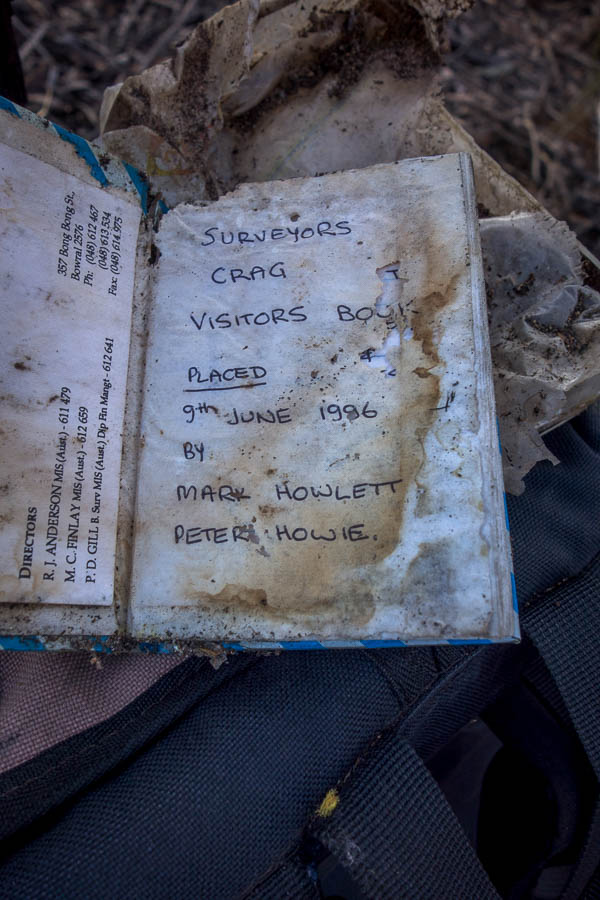 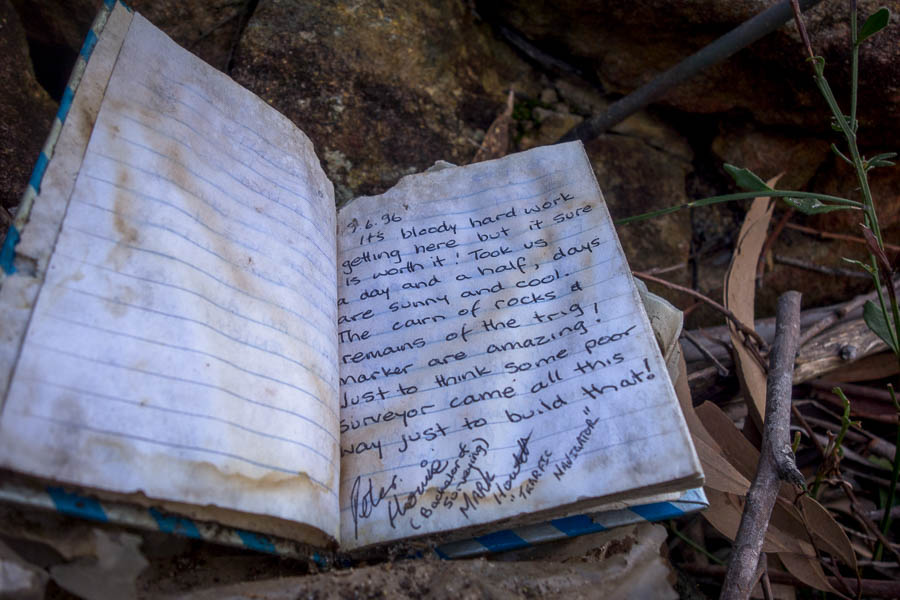 The first entry in the book 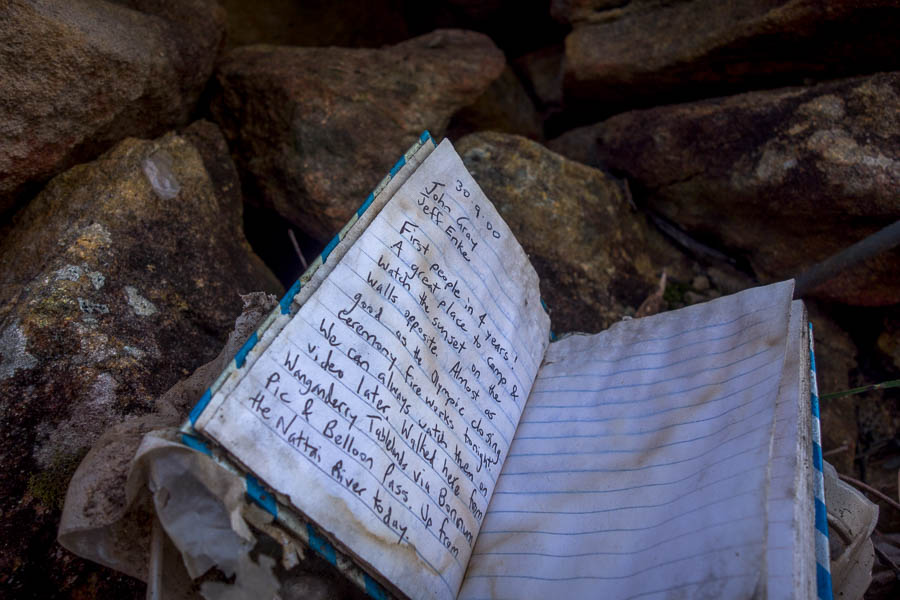 The second and final entry in the book

I know an SBW party visited the spot in May 2018 but they obviously didn’t fill it in. I had wondered about how that trip had gone as it was pre-fires and I imagined the scrub would have been quite bad. But when I went back and reviewed the trip report from the 2018 day walk it had been shortly after an RFS burn. The report concluded “I can honestly say that if it wasn’t for the recent burn we would most likely not have reached our destination in a single day without some very serious night walking.” (as it was they finished after dark).

Since we weren’t doing a day walk we had time for more exploration – so Sunday morning had us crossing a gully so we could get to what Tom had christened “Pointy Point”. (Look at the Hilltop map and you should be able to work out where Pointy Point is!)

The descent creek was a pleasant surprise. Scoured sandstone made for some fun rock-hopping and boulder-scrambling. 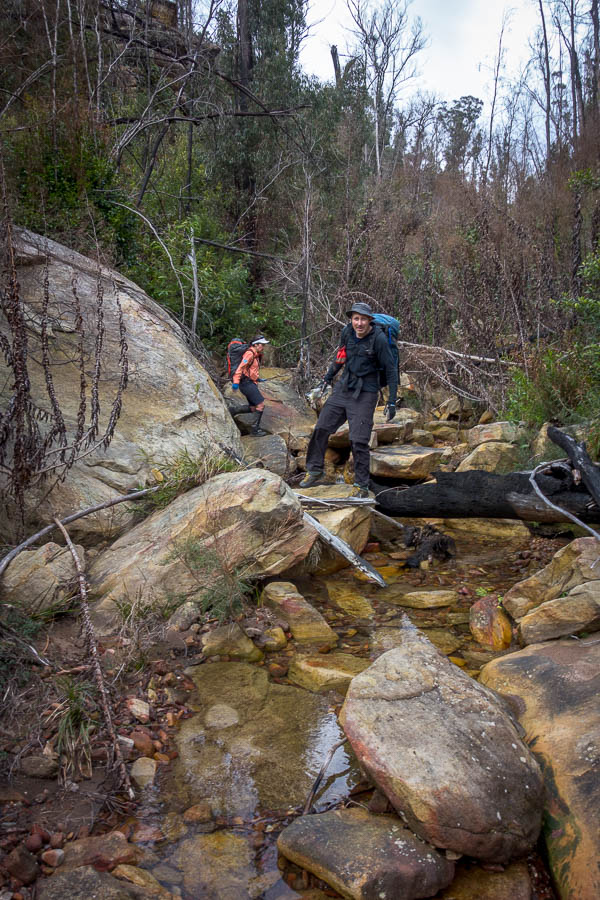 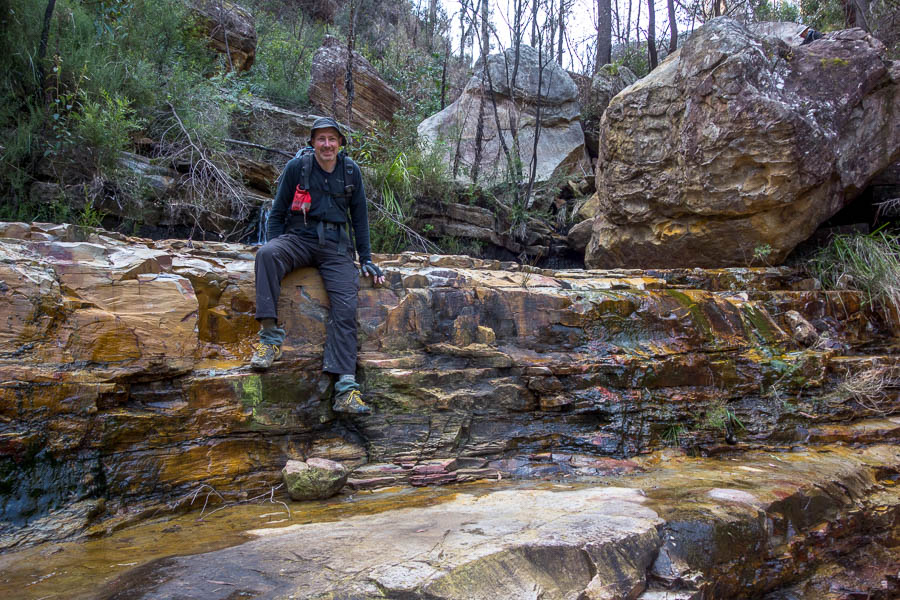 Getting up the other side was a completely different story. I took the lead in plunging uphill through dead incense plants, fallen trees and general vegetation. We eventually got to the top of the other side, which after the 2 hour crossing, meant it was morning tea time! 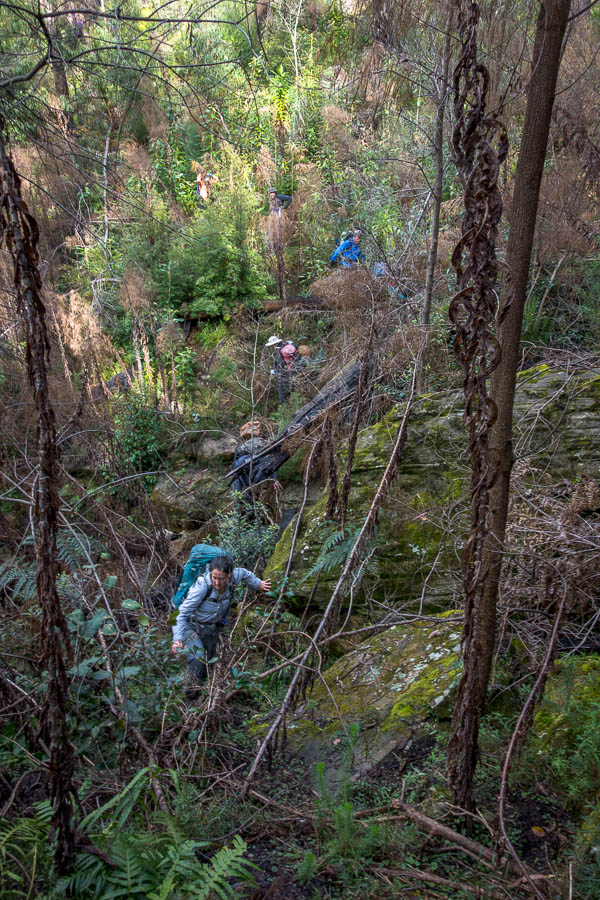 Hard work getting up out of the creek

I think we were all relieved when the Pointy Point ridge was relatively easy walking. It would be interesting to know how much the 2018 RFS burn impacted how severely the different ridges burnt. 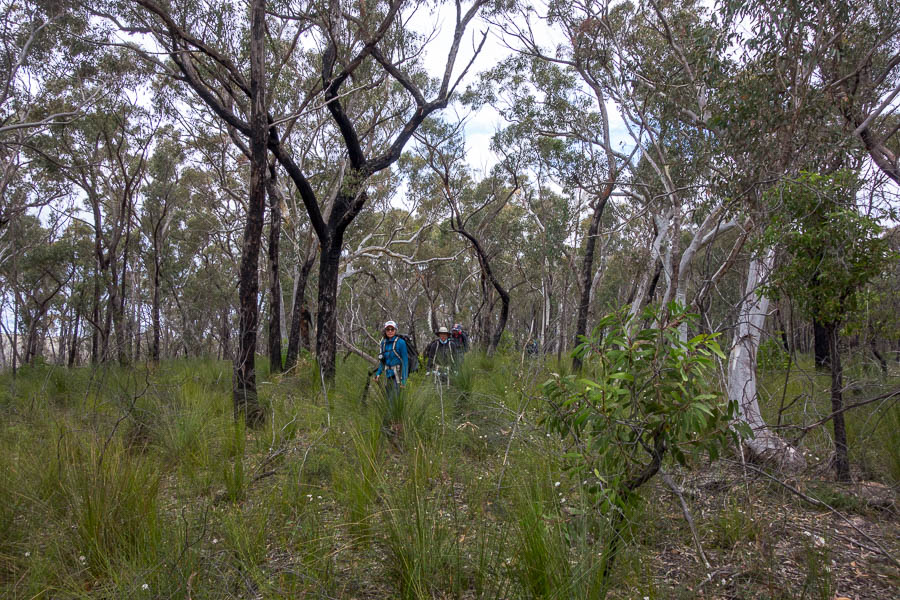 More splendid views and scrambling around edges of Pointy Point kept us entertained before lunch. 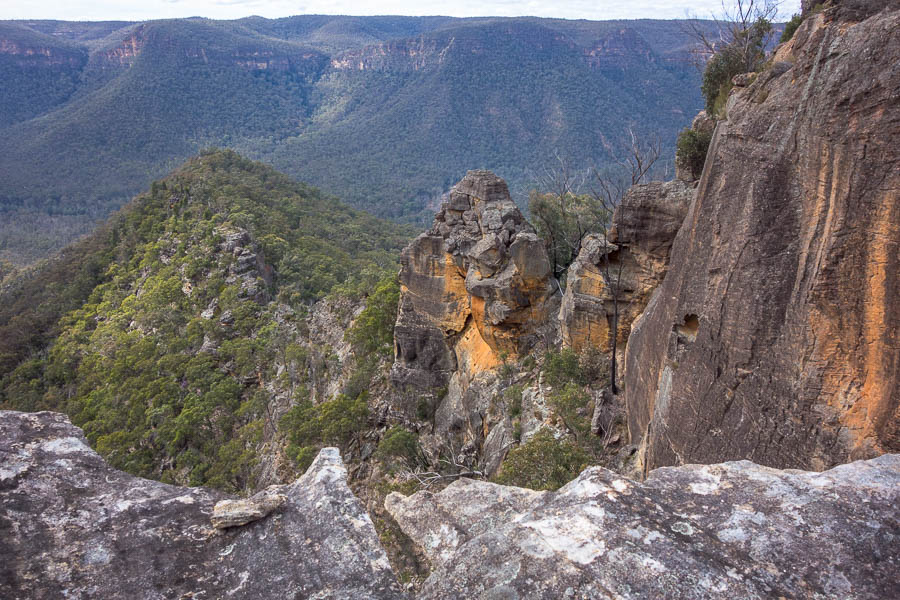 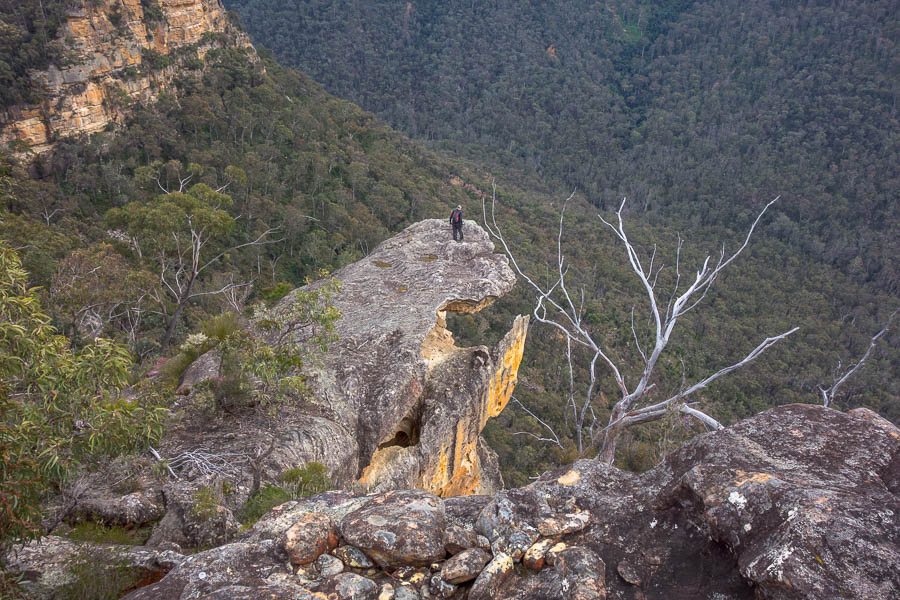 Tom had to shelve his idea of another gully crossing as we were running out of time. Post-lunch walking was something of a grind as we followed boring broad ridges and eventually retraced our route back to the cars. I was expecting a post-sunset finish so it was a bonus that we got back just before 5pm.

We capped the weekend off with an early dinner at the Mittagong RSL. Another fun weekend out in the bush with a boisterous party.

*While the logbook was in “relatively” good condition it was still very weather affected and so I took it & the remains of the container home with me. Future visitors won’t find a logbook unless a new one gets placed.