I wasn’t feeling it when the alarm went off. I still wasn’t feeling it when we started walking (though I was feeling severe DOMS in my hamstrings from two days earlier). Not helped by my walking pace for some reason being considerably slower than Tom & Jon so I kept getting left behind. And I can’t even blame my leg length! However, having endured the rough drive in* which I had no desire to ever repeat I figured I better make the most of the opportunity to explore this part of the world.

*some (most?) wouldn’t consider it that rough. But I dislike rough dirt roads. Particularly ones which I think we could get stuck on. I was glad to be in the back seat and stare out the window and pretend I didn’t know what the state of the road was.

Once we got off the old fire trail and into the off-track walking I had no problem keeping up with Jon and Tom. We started getting some cliff edges and the top of the rocky-ridge was an excellent spot for morning tea. Though as it turned out just below where we stopped would have been an even better spot. Apparently we were making good time as our morning tea spot had been Jon’s lunch spot on a previous trip. 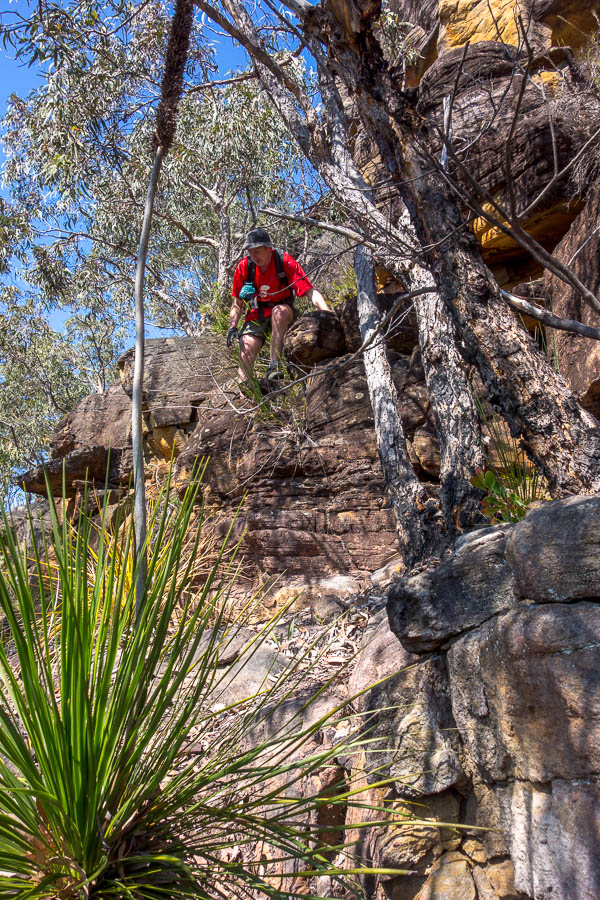 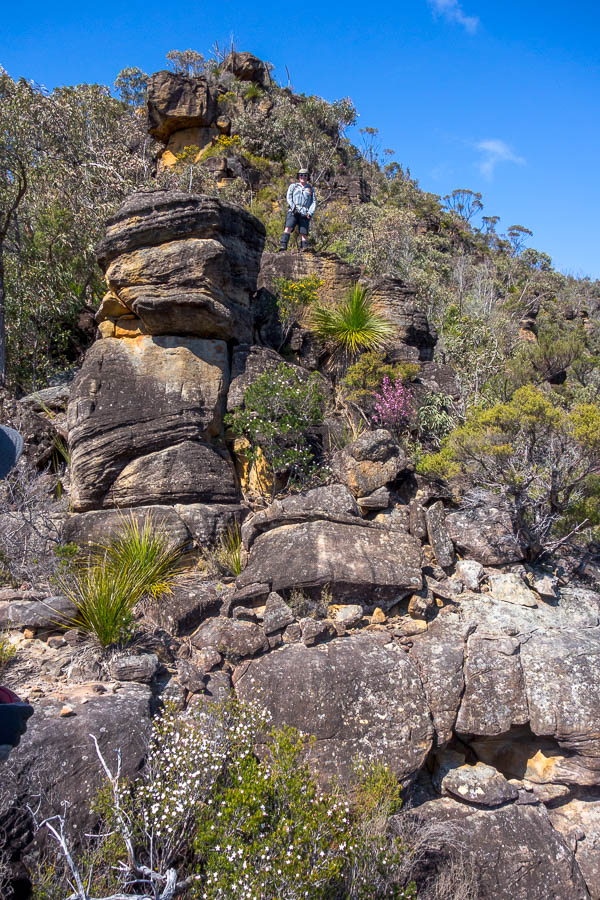 Jon on the rocky ridge 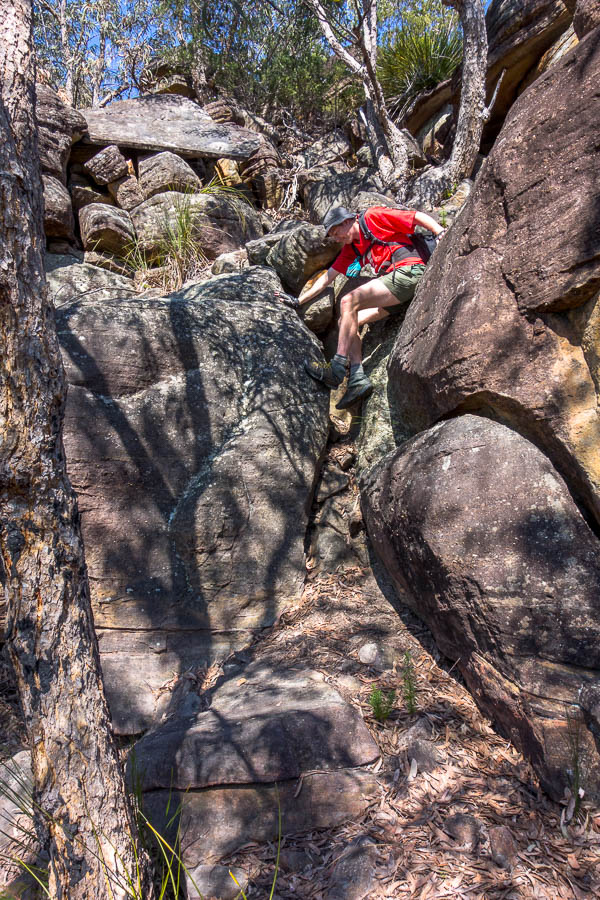 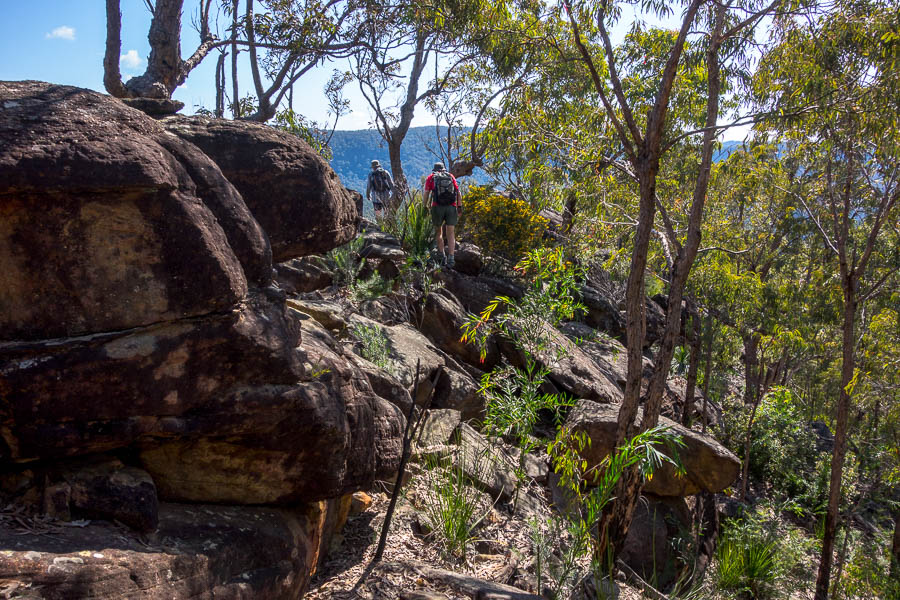 Jon and Tom heading down the ridge

All too soon the rocky scrambling came to an end and we were plunged into some pernicious mountain holly. I’m not sure if mountain holly is just what Tom & I call it – I tried googling it when I got home and found very little in the Australian context. Anyway, Tom assures me the scientific name is Podolobium ilicifolium – the inspiration for this blog post title. This was some of the largest stands of it that I’d seen in a long time. Fortunately it didn’t seem to co-exist with the Hardenbergia – that would be a combination from hell. The holly while prickly wasn’t tooooo bad to push through. After we left the thickets of holly we then had swathes of Hardenbergia – pretty but pretty annoying to get through. 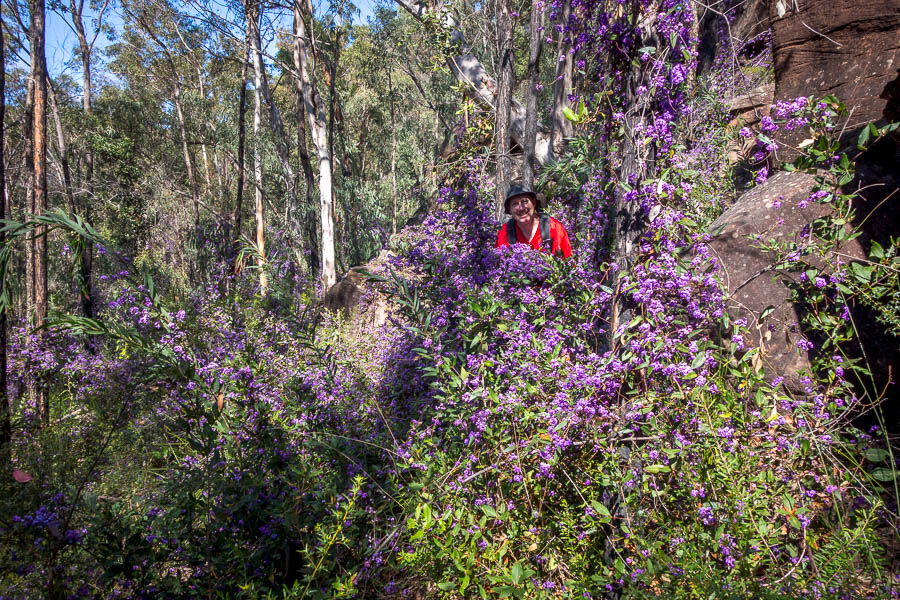 A red shirt amongst the purple

By the time we got down to Bowens Creek I was hot! The day really felt like summer was on the way. I had a very quick swim – the water was bracing. But what a great spot for it. 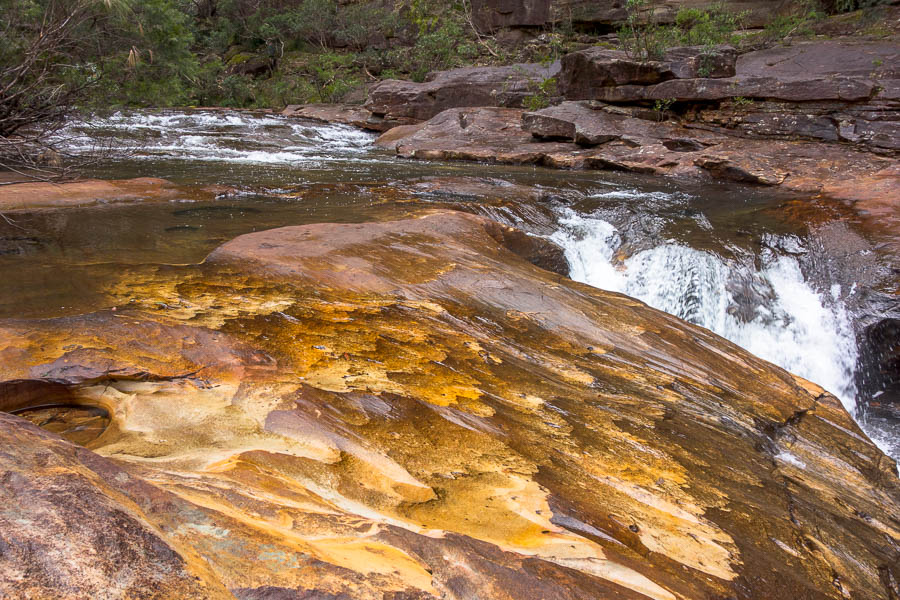 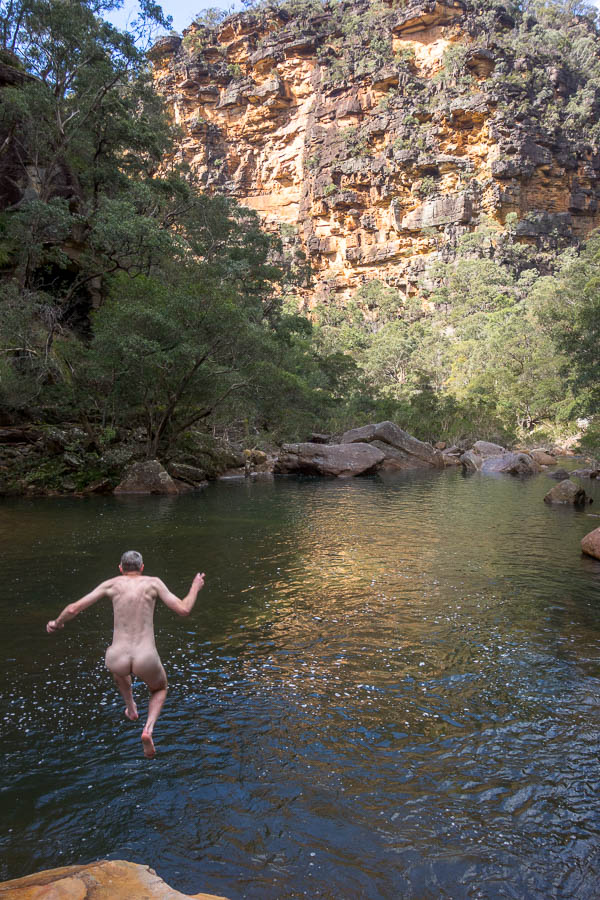 After lunch we headed up a side creek which was surprisingly (to me at least – who hadn’t looked at any maps) vertical. We had some fun scrambling before exiting up another side creek. 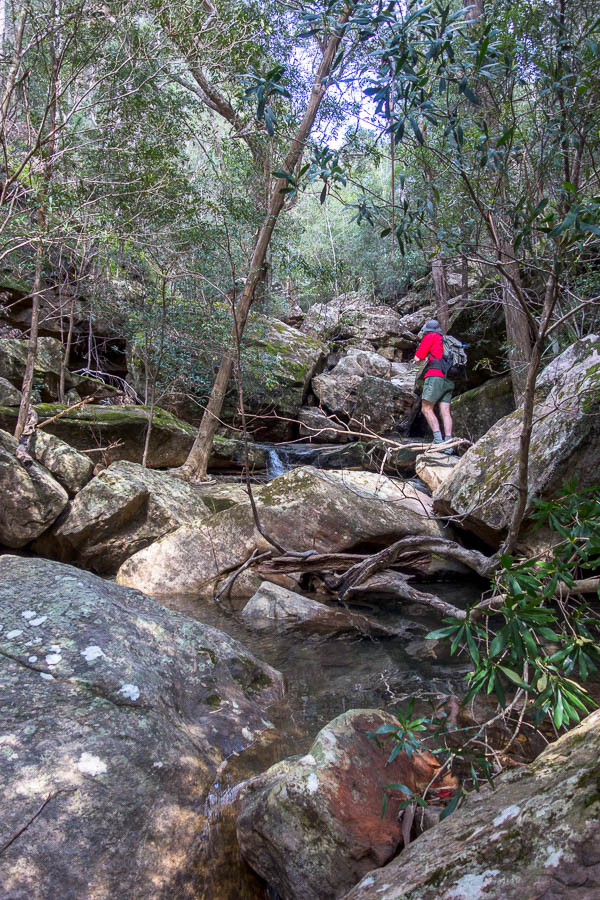 Ascending a side creek 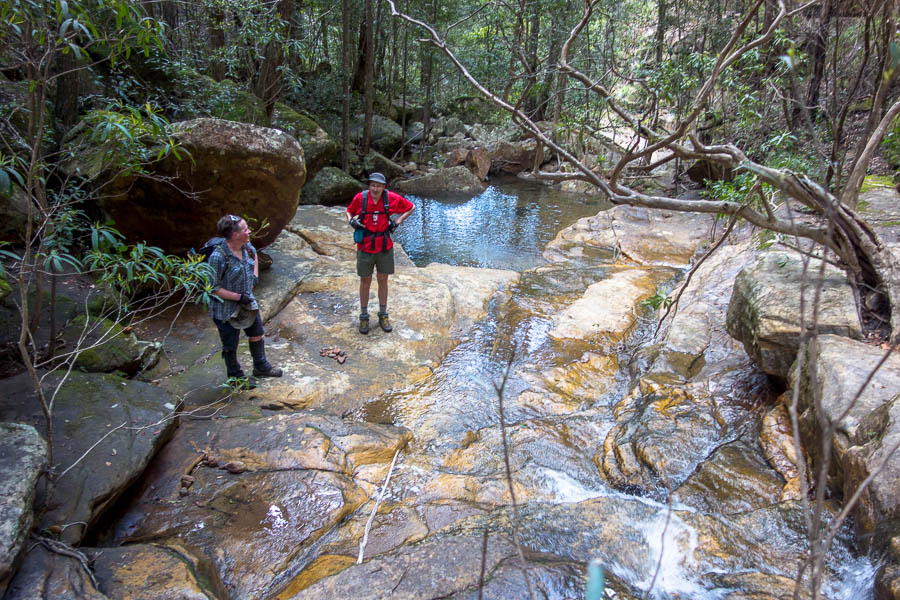 Fortunately Jon found us a way out at the top of the creek – I had gone traversing looking for a break in the cliffs – which were always promising but didn’t deliver. A couple of exposed moves got us ‘out’. 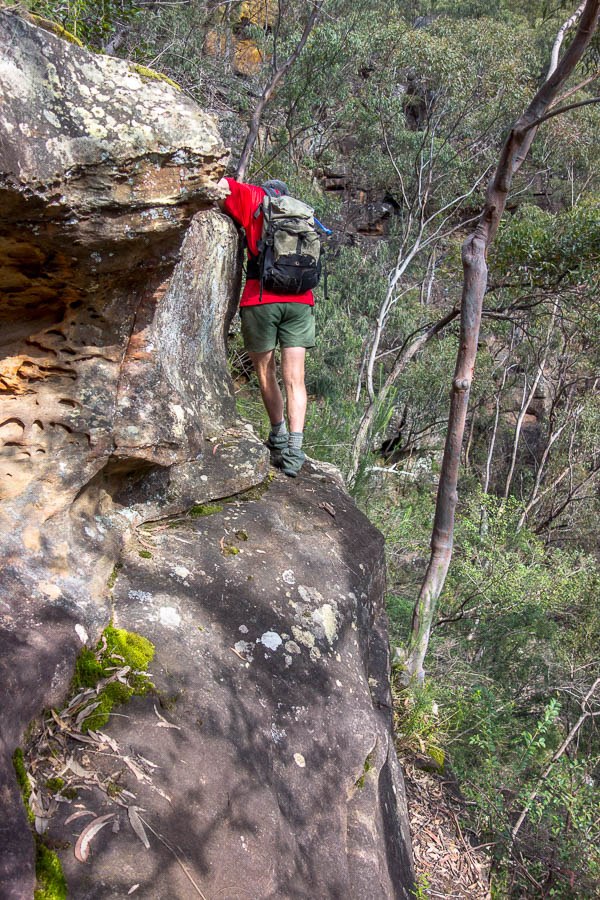 Finding a pass out

Well, they got us through the cliff line. We still had a way to go to get onto the top of the ridge. Here we encountered more mountain holly, which then gave way to more Hardenbergia. Some way up I mentally ran out of steam and relinquished the lead to Tom. It was that sort of vegetation where you don’t even know where to go because everywhere is just a tangle of Hardenbergia and you have to fight for every metre. 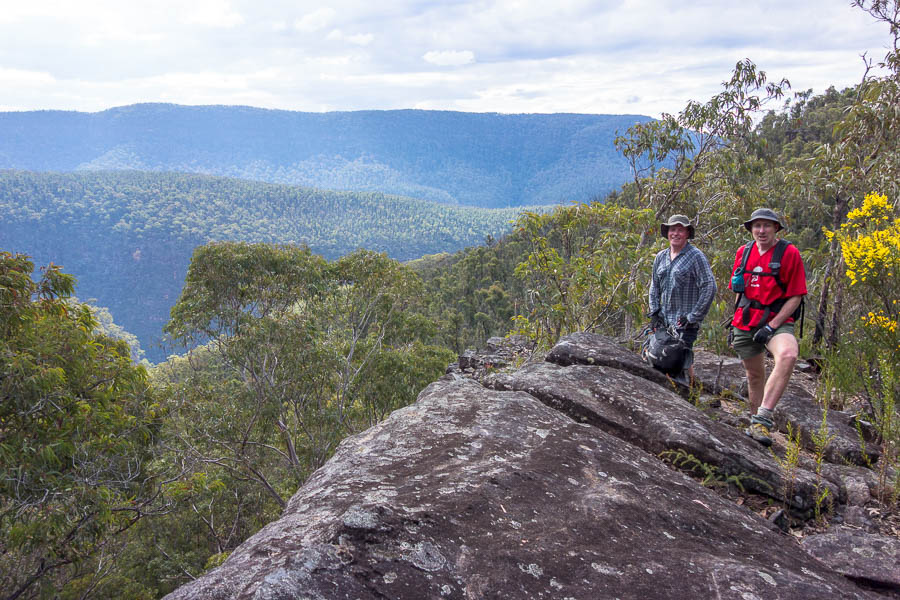 Pleased to have made it through Hardenbergia hell

It was only once we got to the saddle which had a gentle breeze I also realised how stifling it had been on the ascent up the slope. Fortunately the narrow ridge meant the vegetation thinned out and the next section was far more enjoyable. 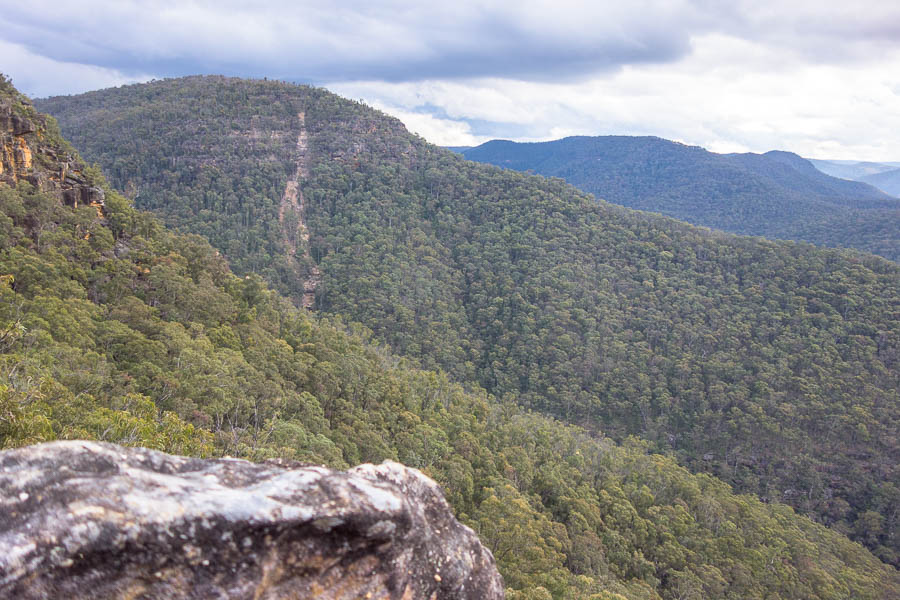 Looking across at the ridge we descended 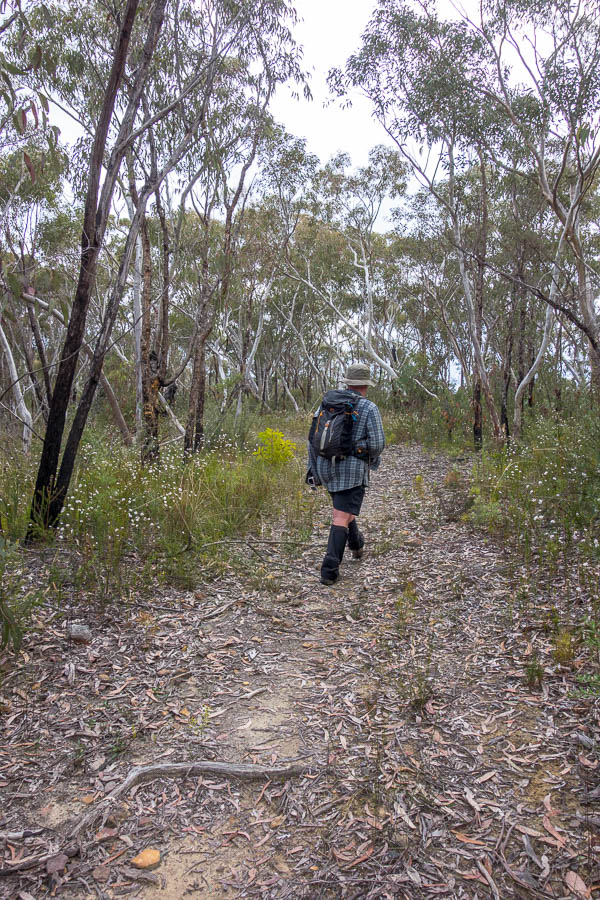 Easy walking back to the car

I had been somewhat concerned we were going to get hit by a storm. Well, let’s be honest, I was more worried that the road out was going to get hit by a storm – and given how much I’d not enjoyed the drive in, a wet road going out was going to be even worse. But we didn’t get any rain. Back at the car Jon commented on a couple of drops of rain on the windscreen but that was it…. until we got to the gate. When Tom got out to open it we could see streams of water flowing everywhere. It seemed a cell had dumped there but missed us only a couple of kilometres away. The next 50m of road was the dodgiest – and not helped by having just been saturated. Jon’s car managed to get us up the slight slope on the second attempt and from there I could relax as we were back on the ‘good’ road. I was very grateful that we had taken Jon’s car and not ours.

We finished off the day with excellent Thai in Richmond. Today was a reminder of how rewarding day trips can be – though a little part of me felt ripped-off that we couldn’t hang about on the creek and enjoy it for a bit longer. I want to say another time… but I really don’t want to drive that road again.