I wasn’t that excited when Sue decided Kanangra was where she wanted to go for her belated-birthday weekend. But since the weather forecast wasn’t that great for Saturday we ended up with a short route for the first day – which meant a “late” start on Saturday morning. An absolutely scandalous 10am start meant we only had to get up at 6am!

It started spitting not long after we arrived and we had hopes for the day when it briefly cleared.

But then the drizzle returned and so we headed directly for shelter. 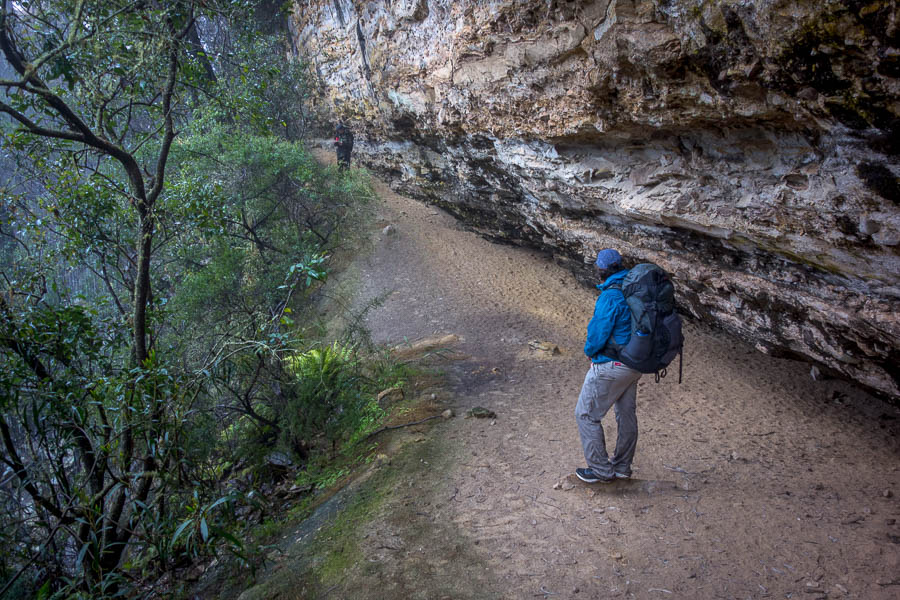 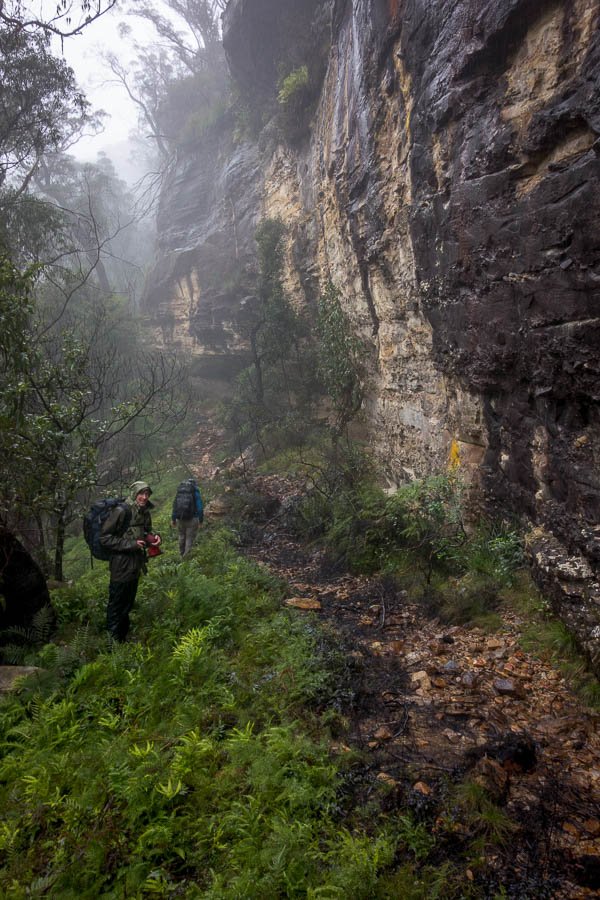 Walking in the rain – seeking something better

We agreed not to light a fire during lunch to ensure we would go and explore afterwards… but we got cold and soon our resolve withered and the fire was started. After hot drinks we accepted reality, that we weren’t going anywhere and settled in for the rest of the day. We did stick to our rule of not starting the evening’s eating and drinking before 5pm – even though the 10 minutes leading up to 5pm seemed to go on forever. Sue had her snacks laid out well in advance so we could get into them as soon as the clock ticked over. 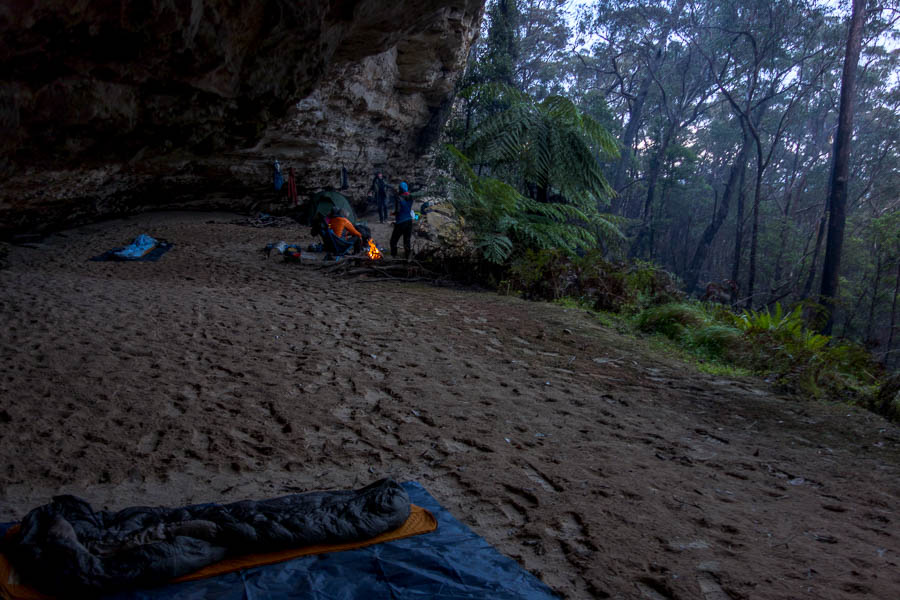 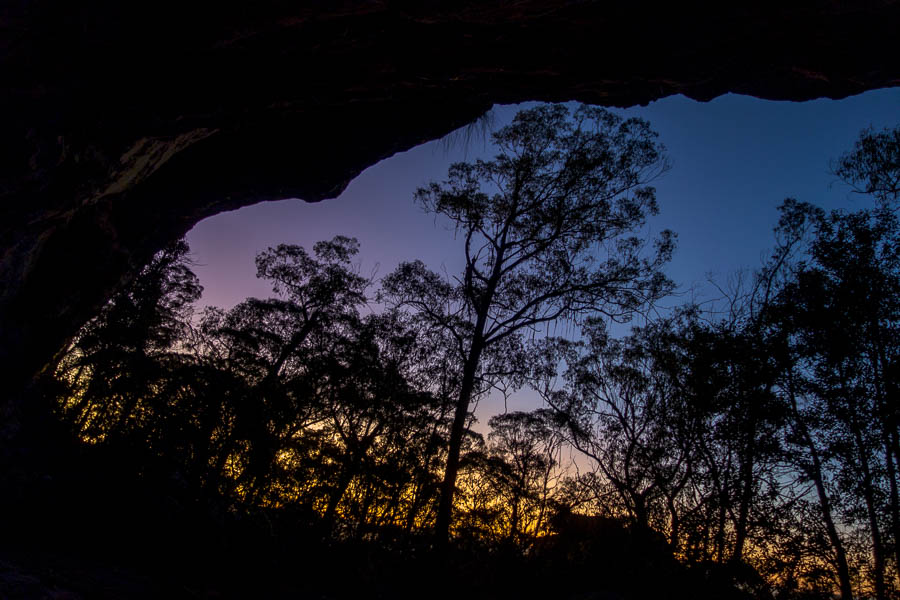 Gorgeous sunrise from my warm sleeping bag (no clouds!)

With the constant waterfall from above it was hard to know what the weather was doing through the night. But stars seemed to be evident when I looked out and it was amazing to see a completely clear sky as the light broke. 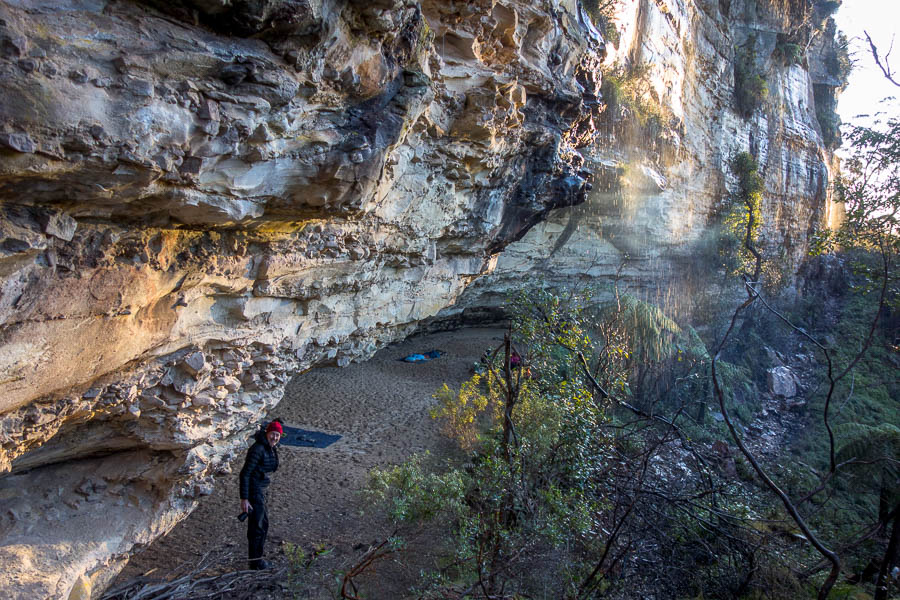 A constant stream of water created a curtain across the overhang

Once we got on top of Mount Barrallier it became evident why there was a constant waterfall – the plateau was sodden. Centimetres of water just sitting on the soil with nowhere to go. If anyone had aspirations to staying dry they were quickly wiped out as we sloshed our way to Bushlanders Point. 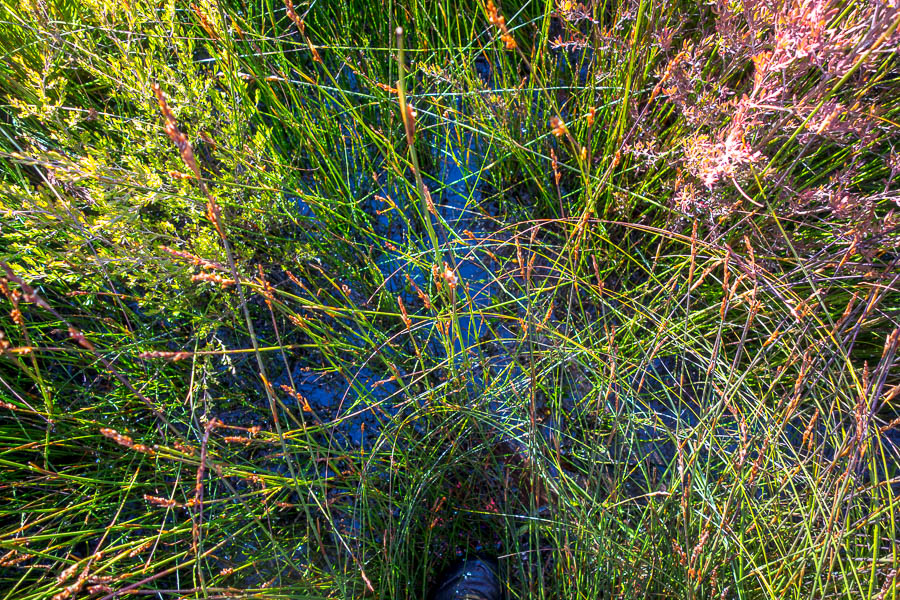 I was pleased to find a small rocky outcrop at the point to get out of the sword grass and water. 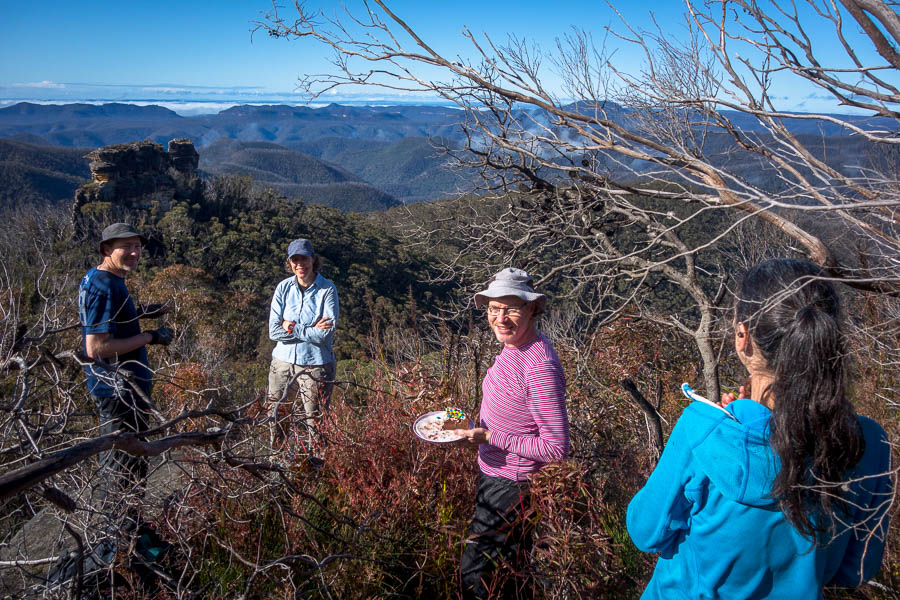 Cake round 2 from Bushlanders Point 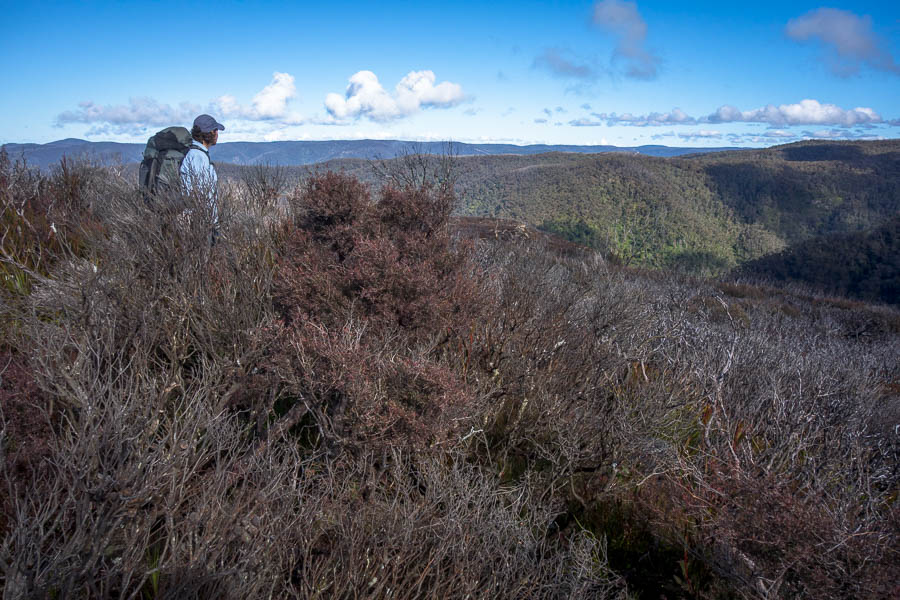 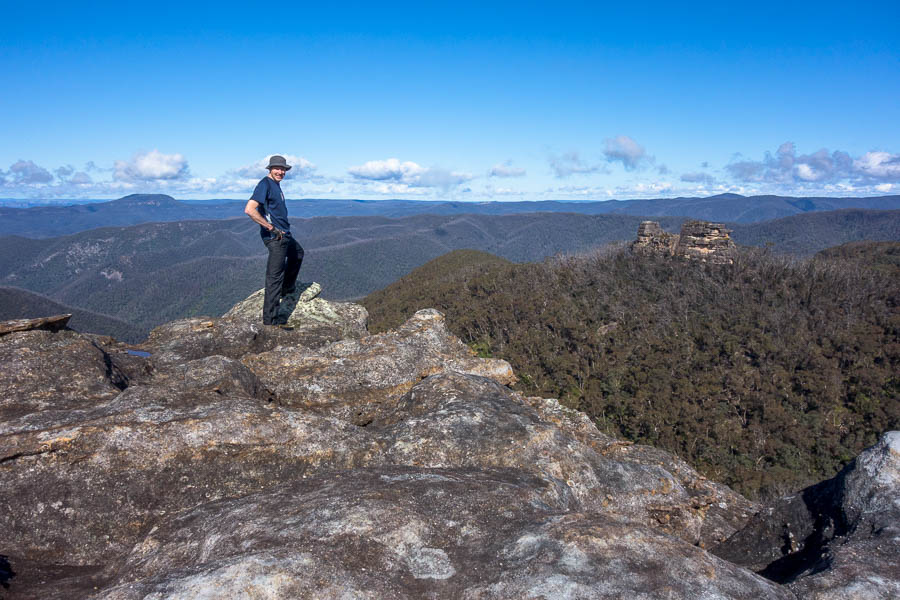 A couple of hours later we found an excellent lunch spot looking over classic Kanangra scenery on dry rock platforms. I made sure to roll up my sleeves so my arms got a taste of the sunshine which has been so absent this winter. What a stunning day we had been treated to. 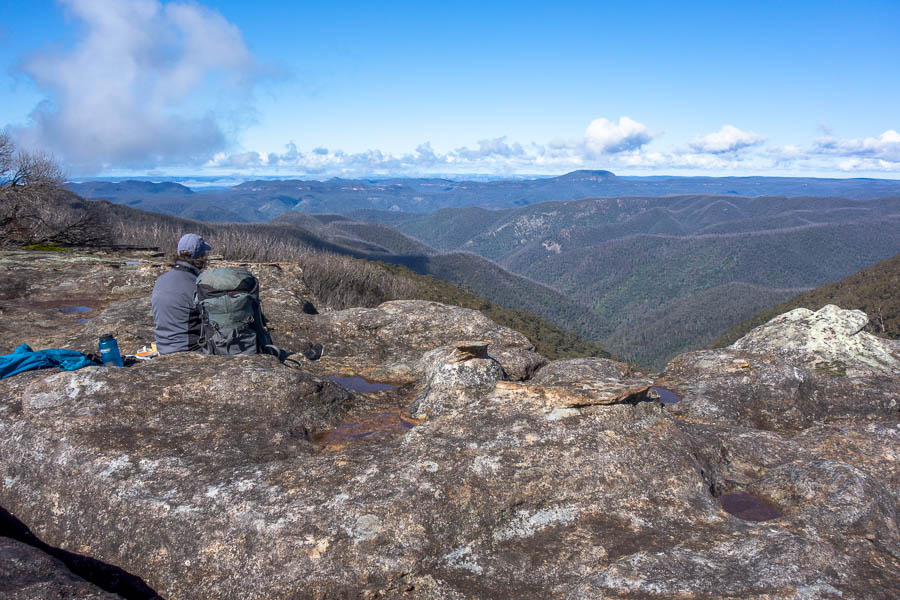 Sue enjoying our birthday present to her – Kanangra views! 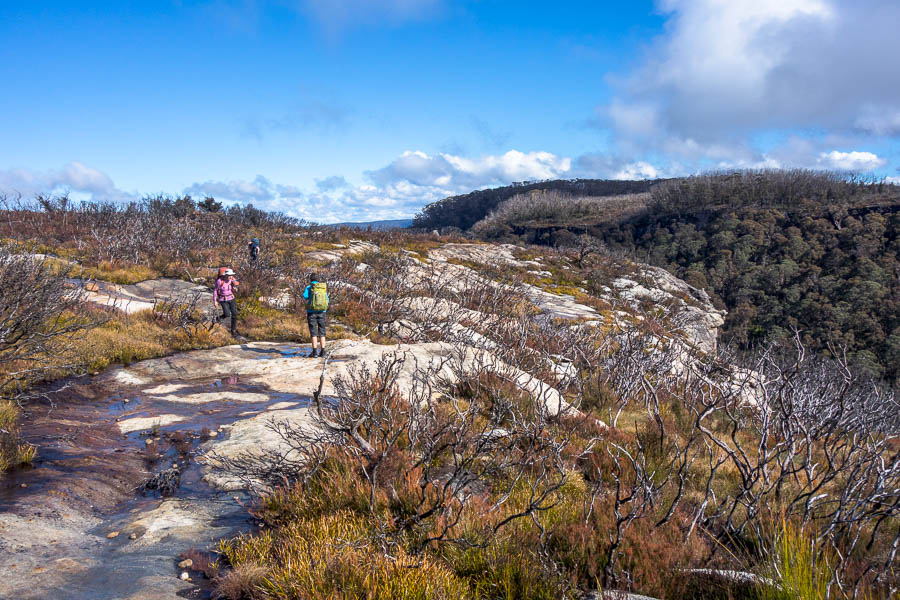 There seemed to be some nervousness about the steepness of our proposed descent ridge. And additionally what the water levels would be like in Christys Creek given how wet the last few months have been. The slope was indeed steep – the upper section being somewhat pleasant to descend as it was quite blocky quartzite, but that turned to vegetation covered slopes which proved far more challenging. 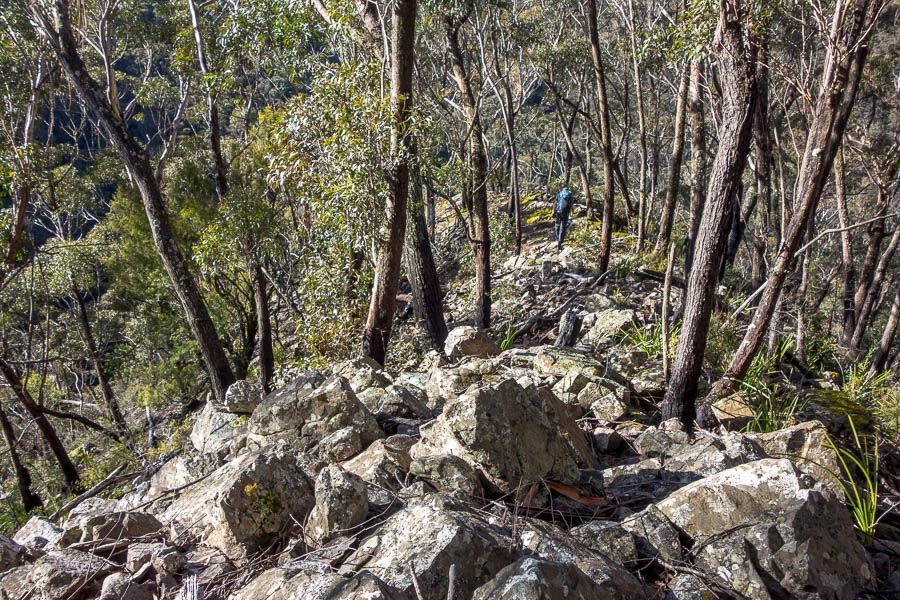 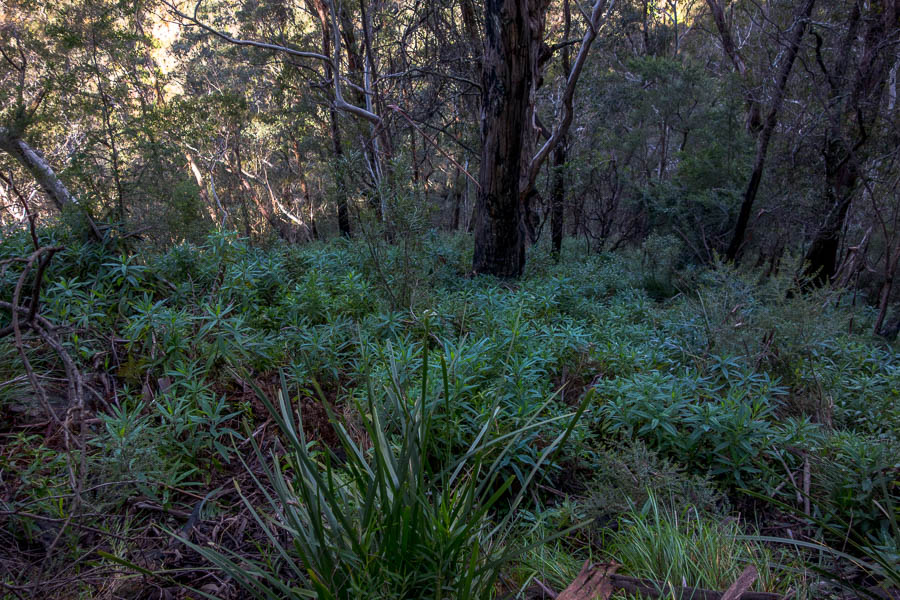 But we made it down without significant issue to find Christys Creek looking relatively benign – I suspect it had been more feisty on a memorable trip Tom, Smiffy, Rich & I did in 2011. 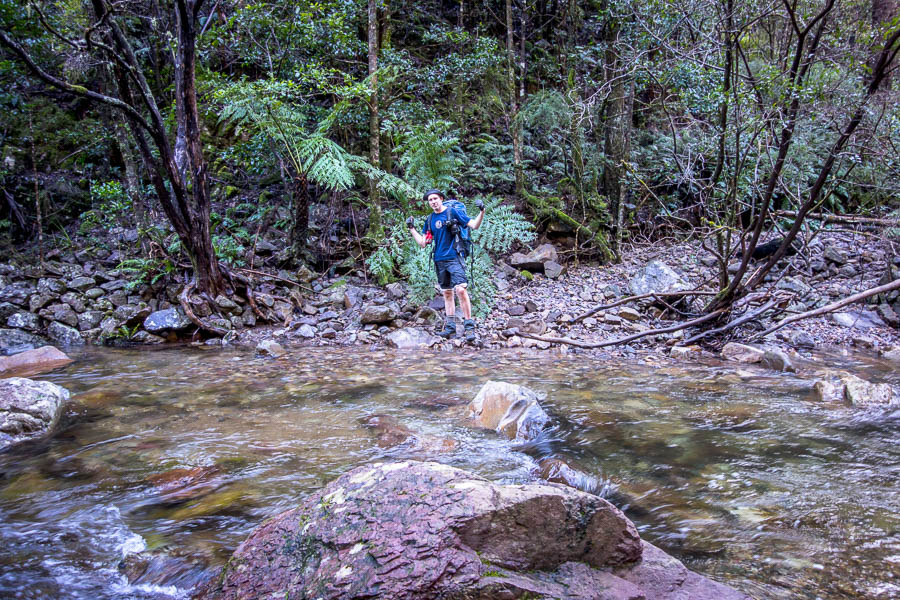 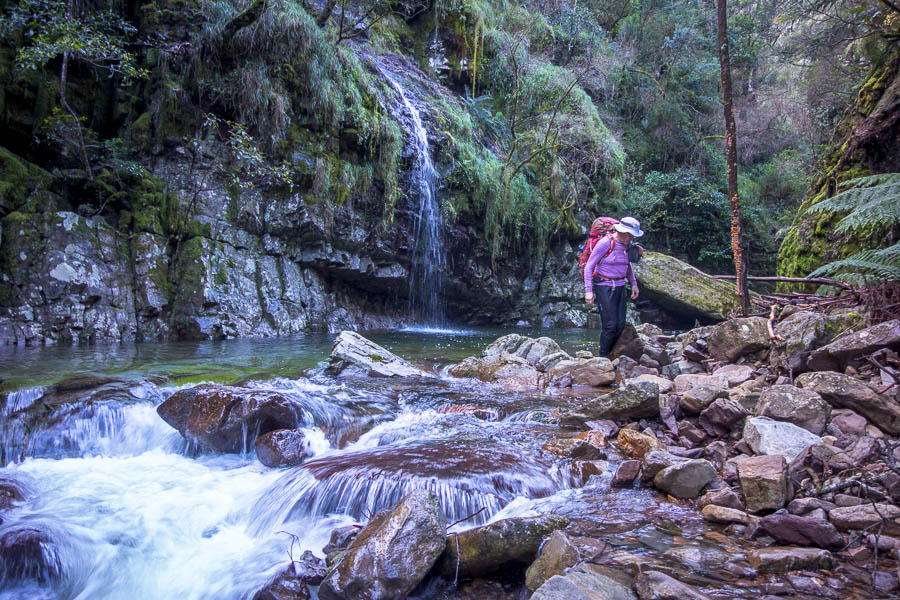 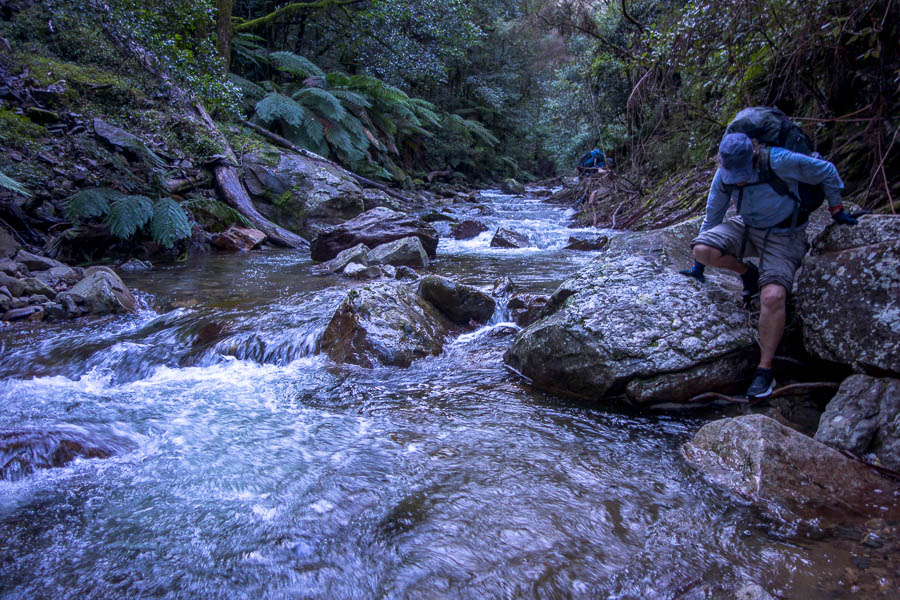 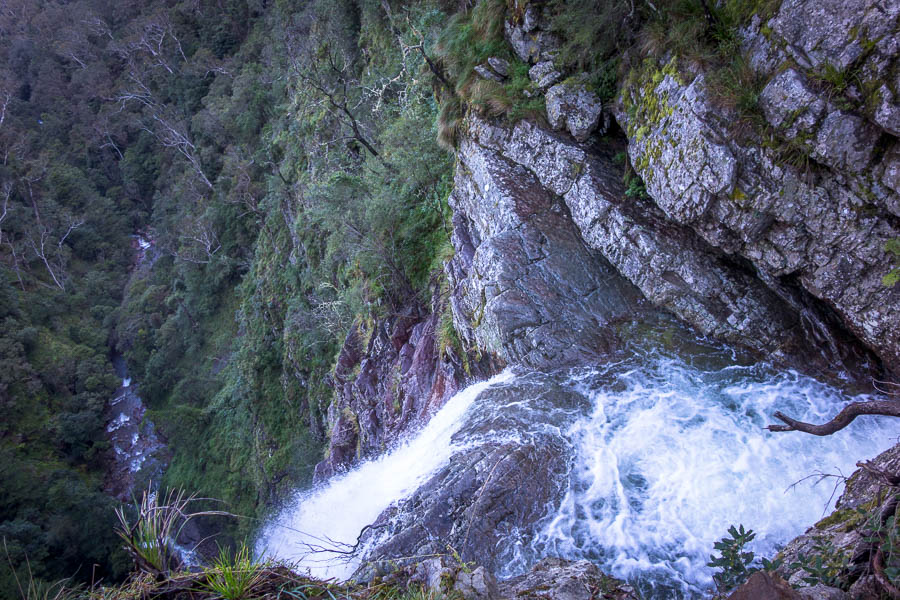 Tom had somewhat optimistically thought we would have time to head on to Mount Bungin but it was already after 3:30pm by the time we started our ascent from Margaret Falls. The exit track from Dione Dell canyon was not well trodden – some randomly spaced sections of pink tape were presumably trying to get it back after the fires, but the slopes were so open and the tape intermittent – unclear how successful that will be. 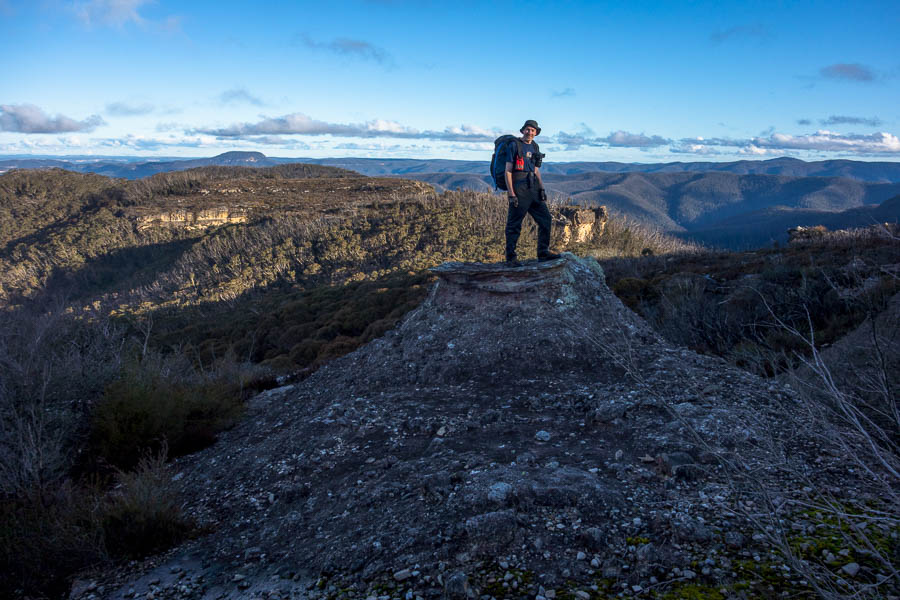 The last lookout of the day (so says Tom) 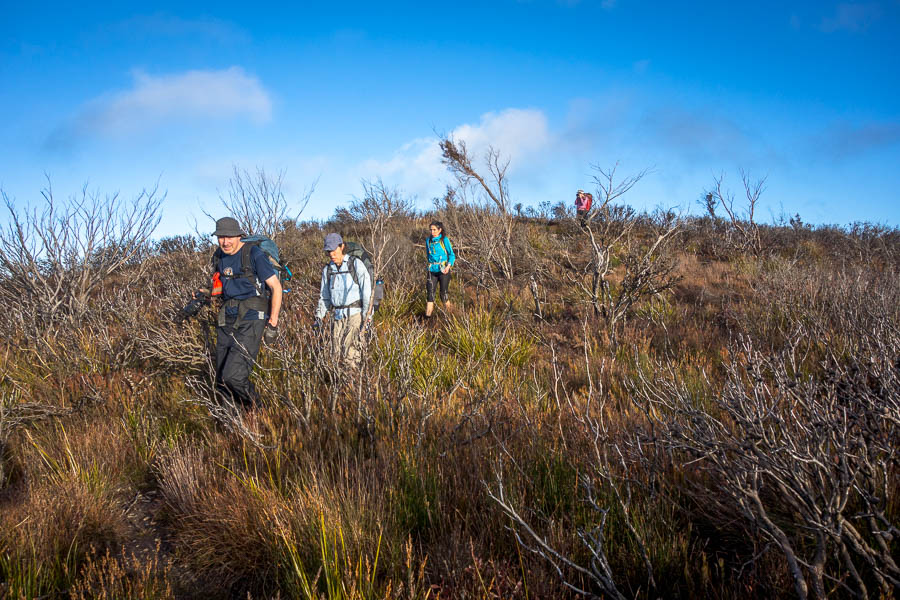 We all seemed to take turns trying to find the old track across the heath back to the road. Where we were did locate it you almost didn’t want to walk on it such was the hazard. The slippery clay underfoot threatened to put most of us onto our butts from time to time. Eventually we reached the road – where we had no car since I had said we shouldn’t bother with a car shuffle. Fortunately we managed to flag down a passing car soon after we started walking and so dispatched Tom to get a car and come pick us up. The couple who kindly gave Tom a lift were baffled at Tom’s story of what we’d been doing for fun over the weekend 🙂 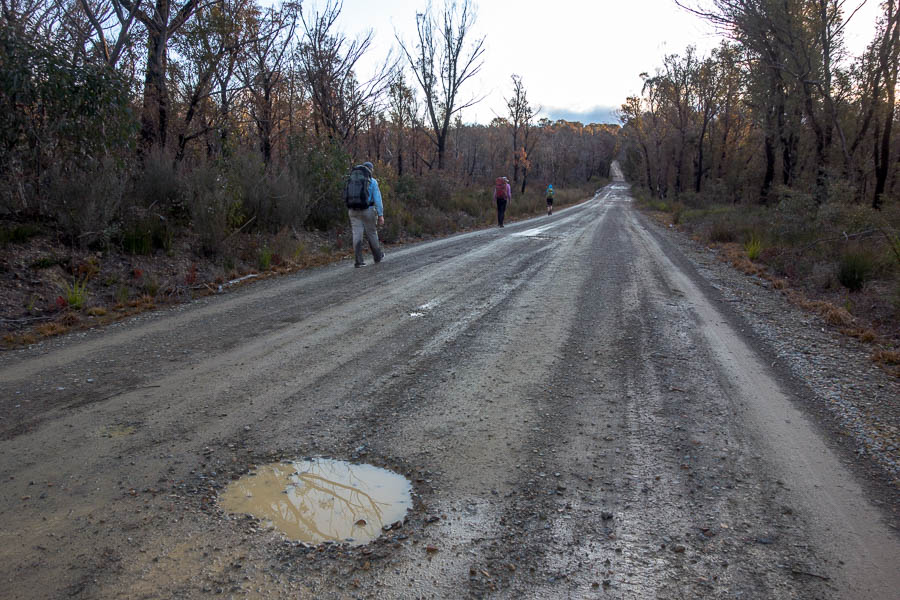 The shortest discussion of if/when/where to go for post-walk refreshments concluded a pub dinner in Blackheath was in order. Sadly we only caught the final number of what seemed to be an open music performance night.

Unexpectedly good weather on Sunday turned this into an excellent trip with great company as always. A great way to welcome Sue back home.