It was finally time to use a gift voucher I’d been sitting on for almost a year. After months of rubbish weather nothing could be taken for granted about whether we’d be able to fly. Fortunately a week of fine weather lasted, and the forecast fog was insufficient to cancel the flight. Using the voucher in June was part of a cunning plan to avoid getting up too early – only a few days off the winter solstice meant probably the latest start one could hope for. Our accommodation was only 5 minutes walk from the meeting point, so a “civilised” 5:25am alarm gave us plenty of time to make the meeting point at 5:45am.

The weather was being fickle. We set off to the launch point for Plan A, but some further wind testing by the pilot had us driving back across town to launch point B. 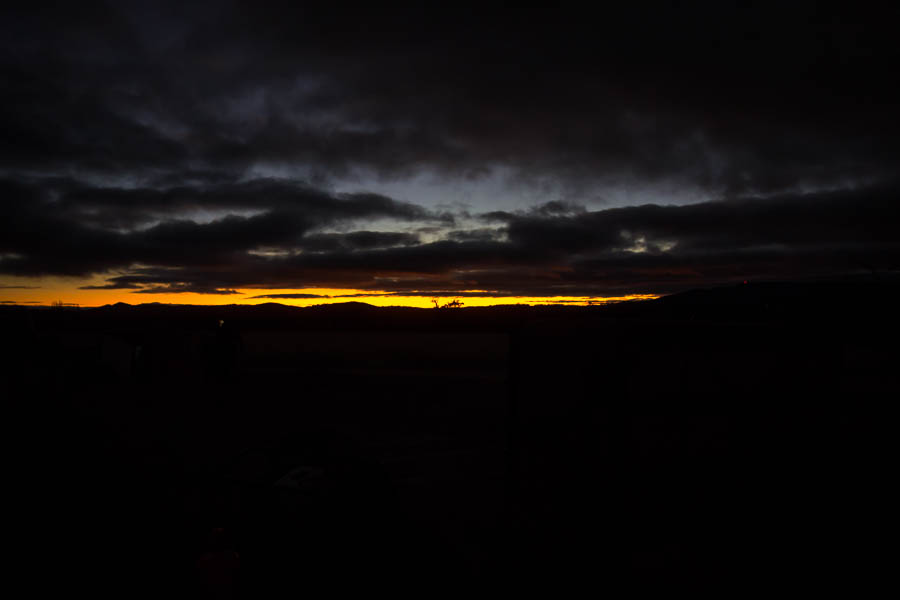 Getting the balloon ready is a bit of an operation but eventually we had lift off. 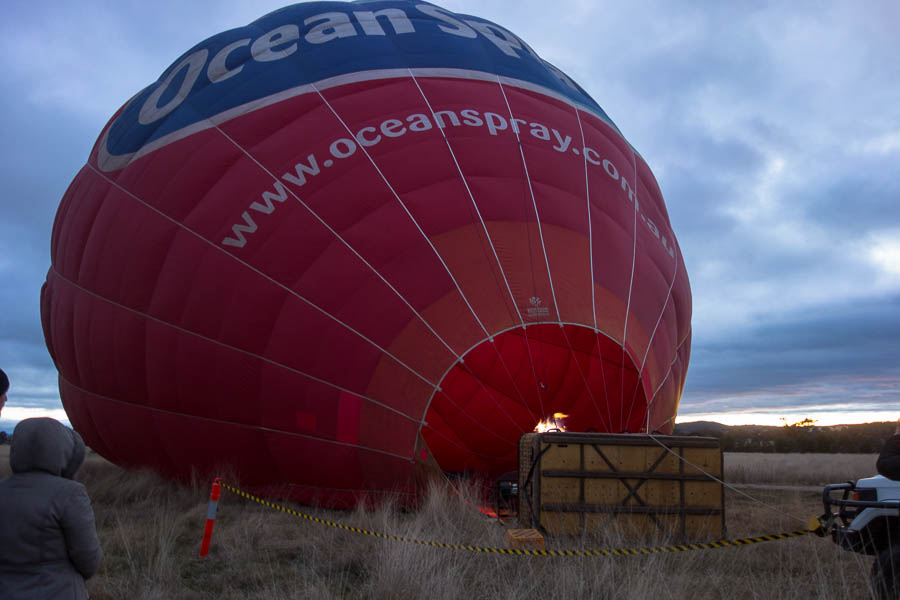 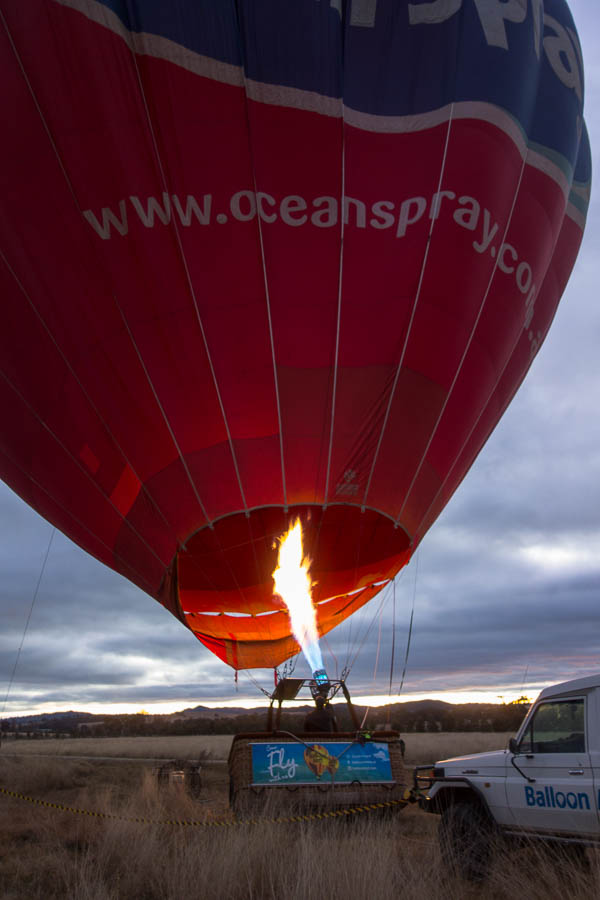 Almost ready for us

About to take off (photo: Balloon Aloft) 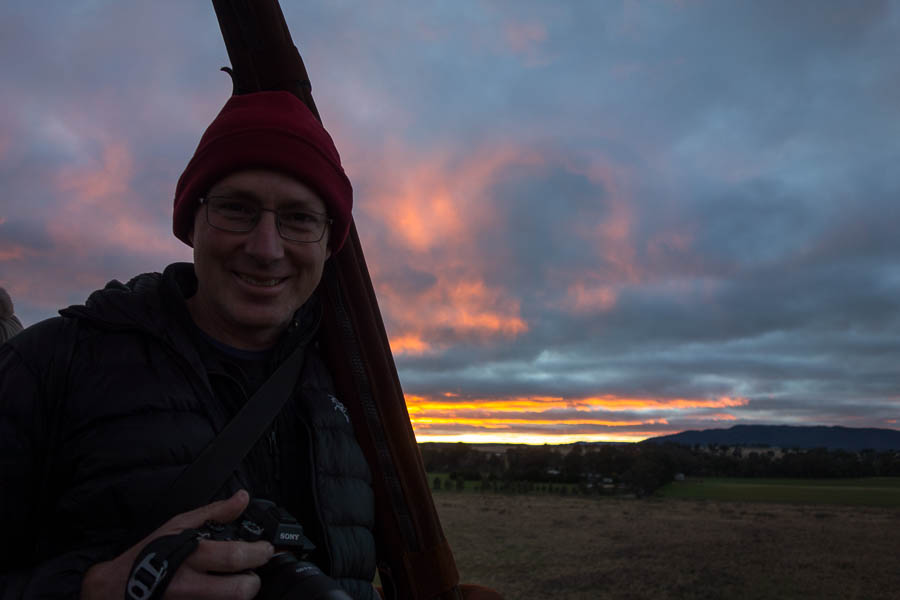 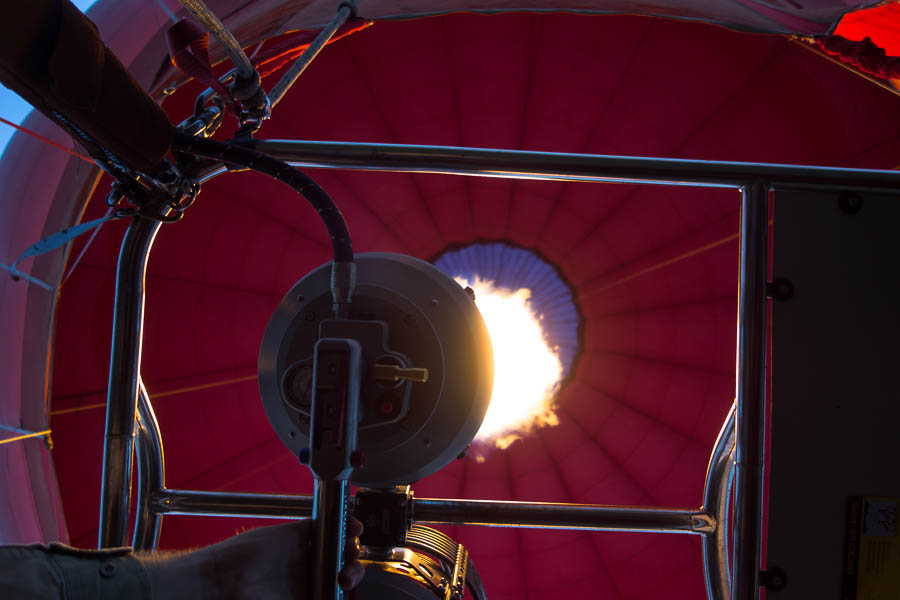 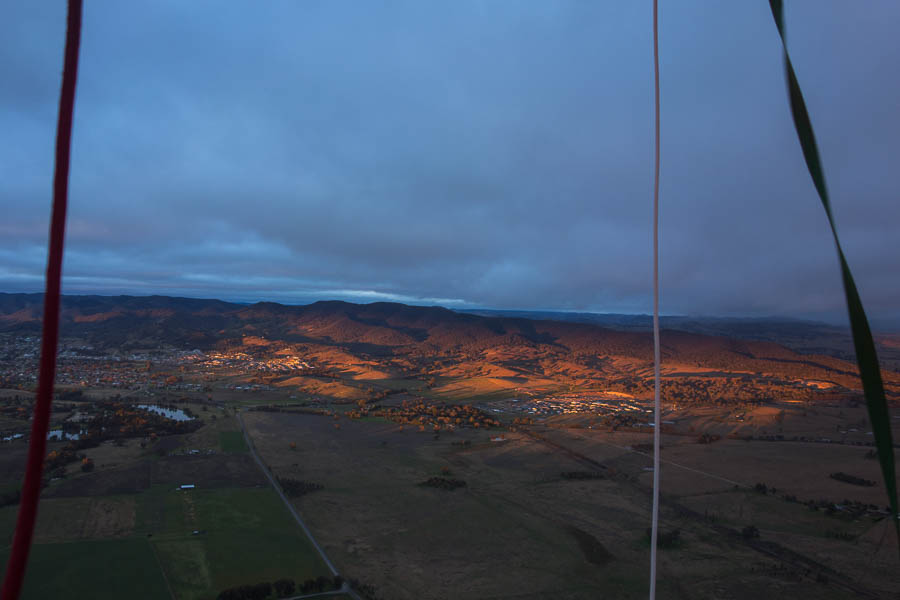 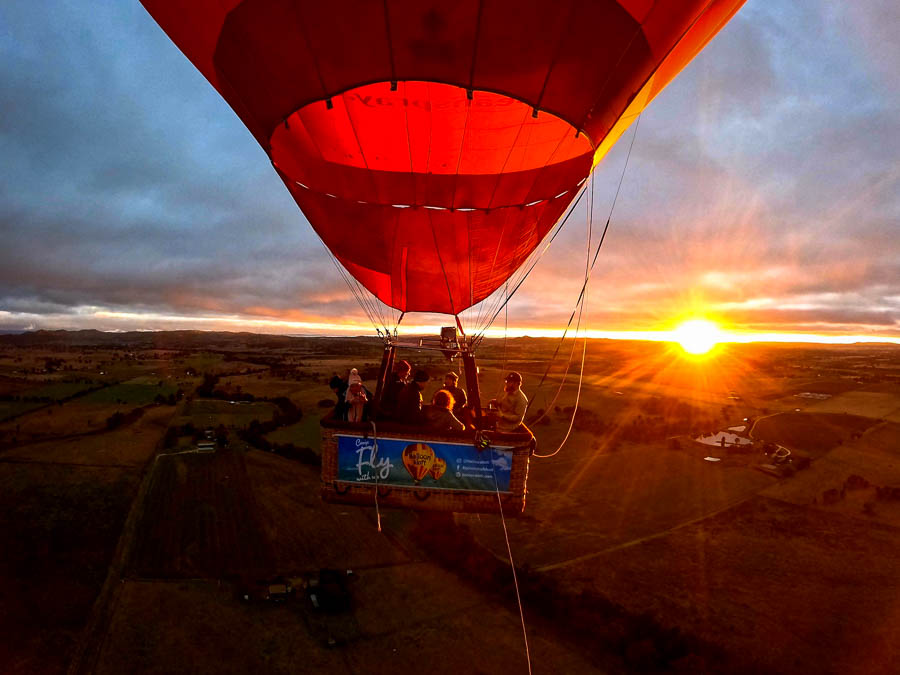 As I enjoyed the views towards the Bylong Labyrinth Tom reminded me of our trip there almost exactly two years earlier. This weekend was definitely a lot easier! 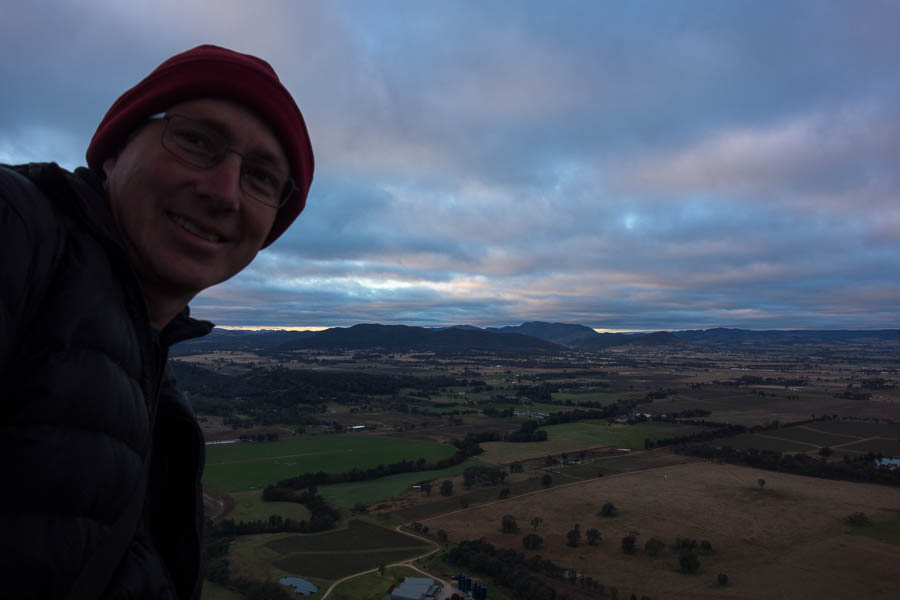 Tom & the Bylong Labyrinth in the distance 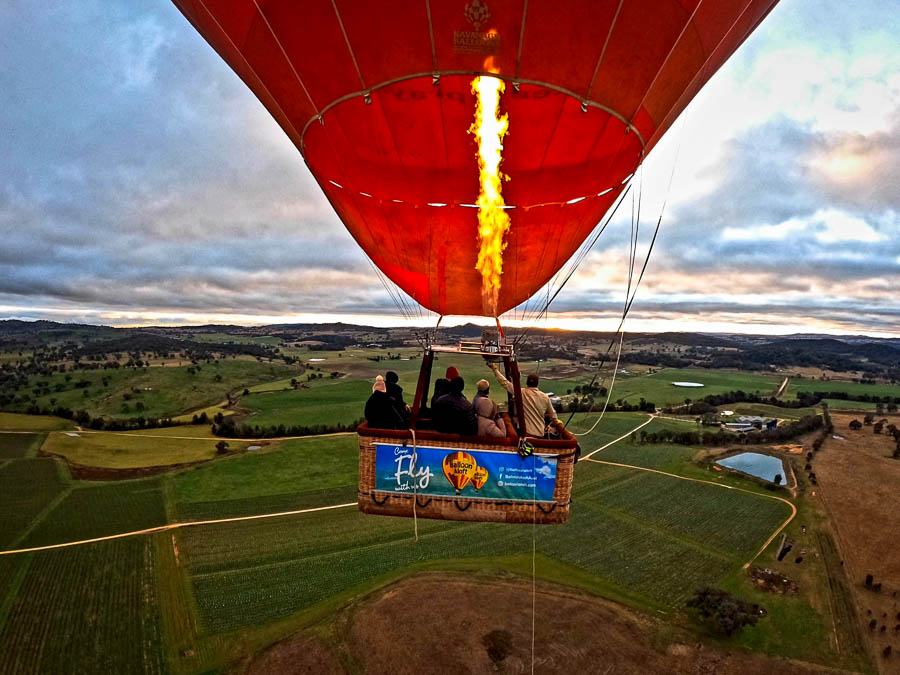 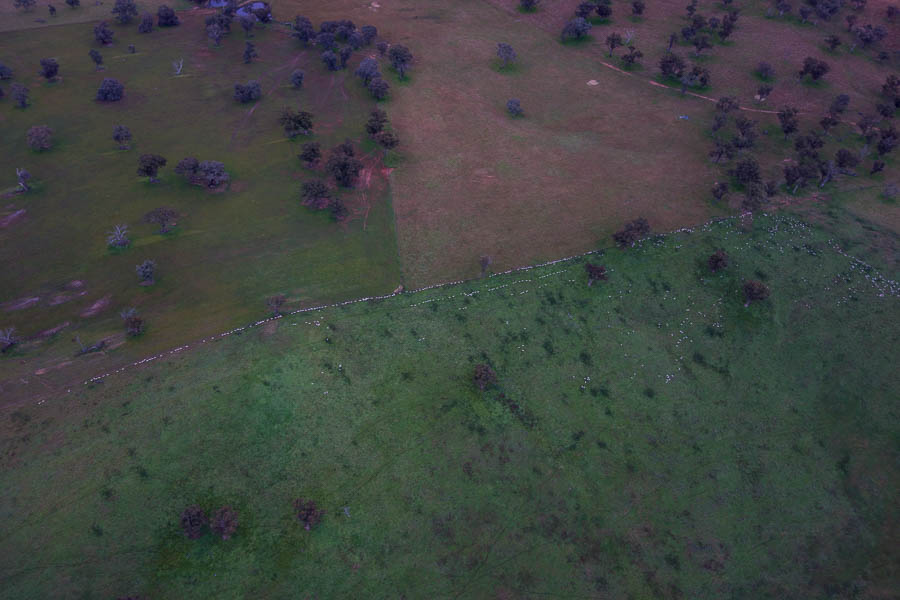 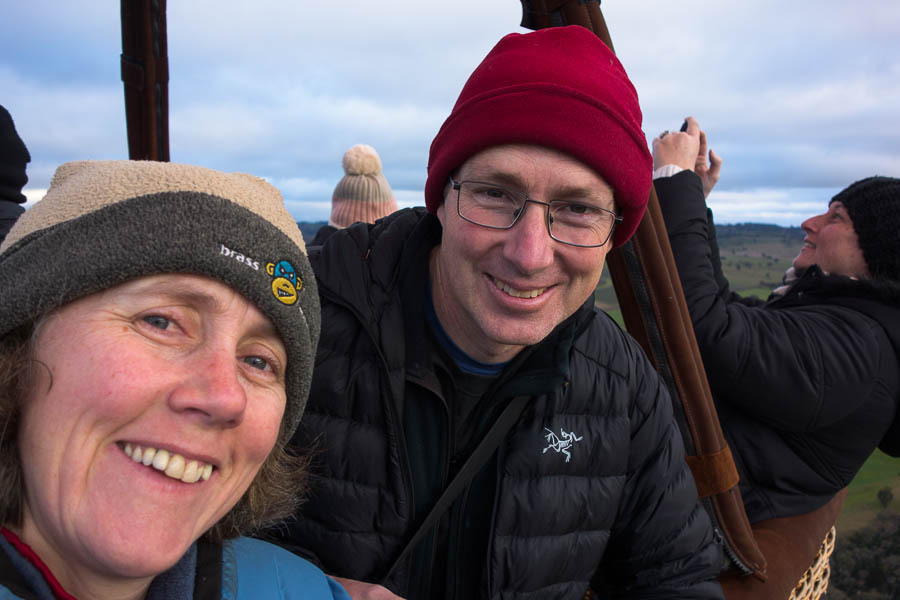 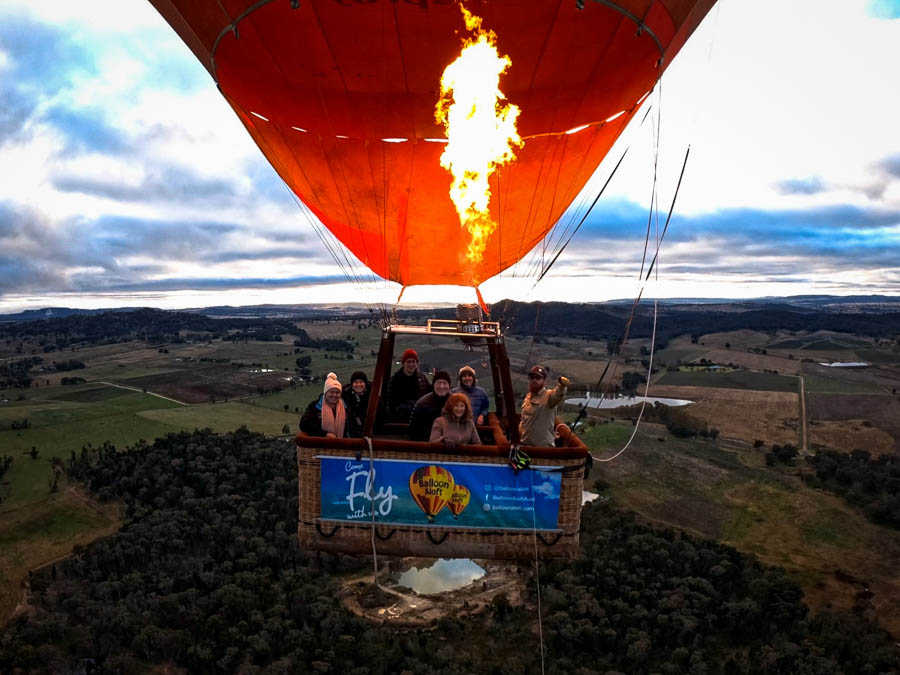 Hot air balloons cannot be steered – their direction is solely dependent on the wind. This makes determining the landing spot somewhat interesting. The wind continued to be a little difficult throughout our flight. Landing spot Plan A came and went with us not in a position to land. 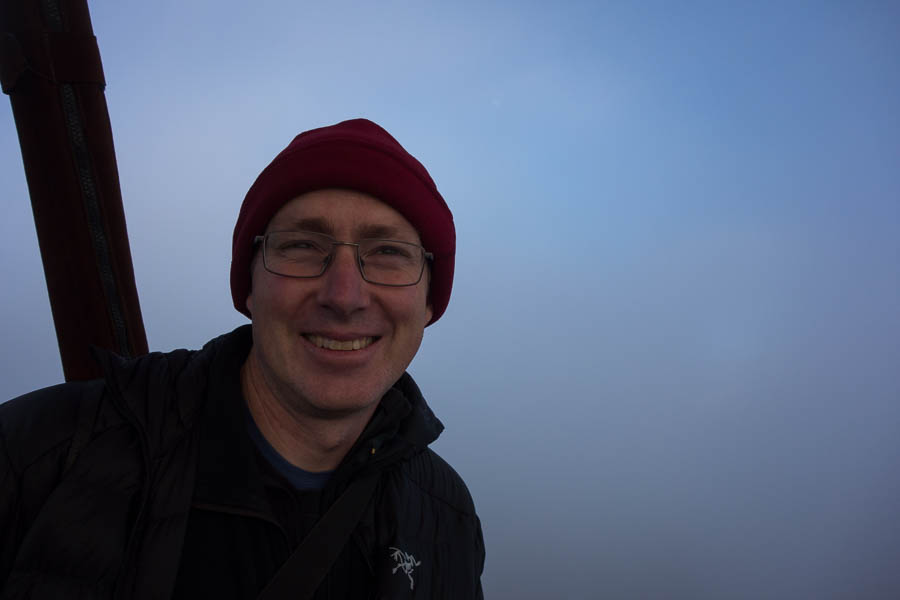 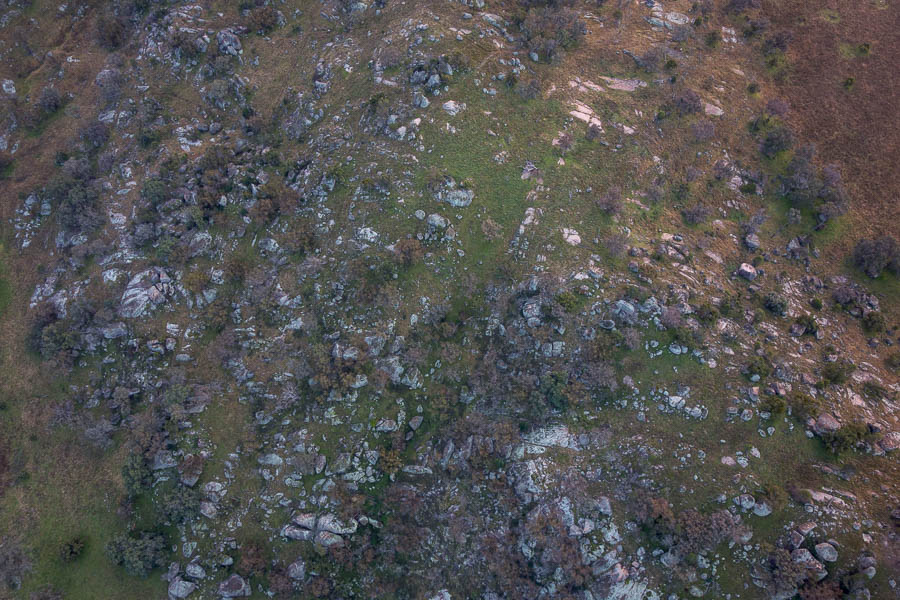 Passing over a rocky ridge

Landing spot Plan B was probably more of a hopeful rather than realistic option. It looked pretty good as we were coming in (photo below) but the wind pushed us across towards the trees as we got lower, so up we went again. 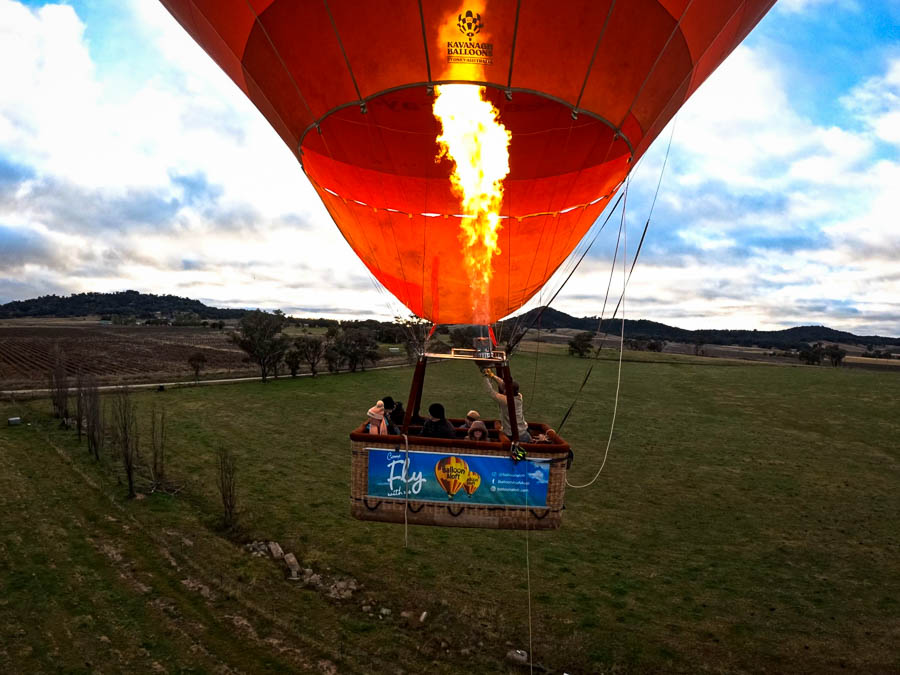 Our third spot worked out well, and it was a very gentle touchdown. The landholder came over to check us out as I don’t think this was a regular landing option – looking rather grumpy – but he was fine just his natural look I think. The kids being taken off to school had a rather different attraction to look at next to the driveway! 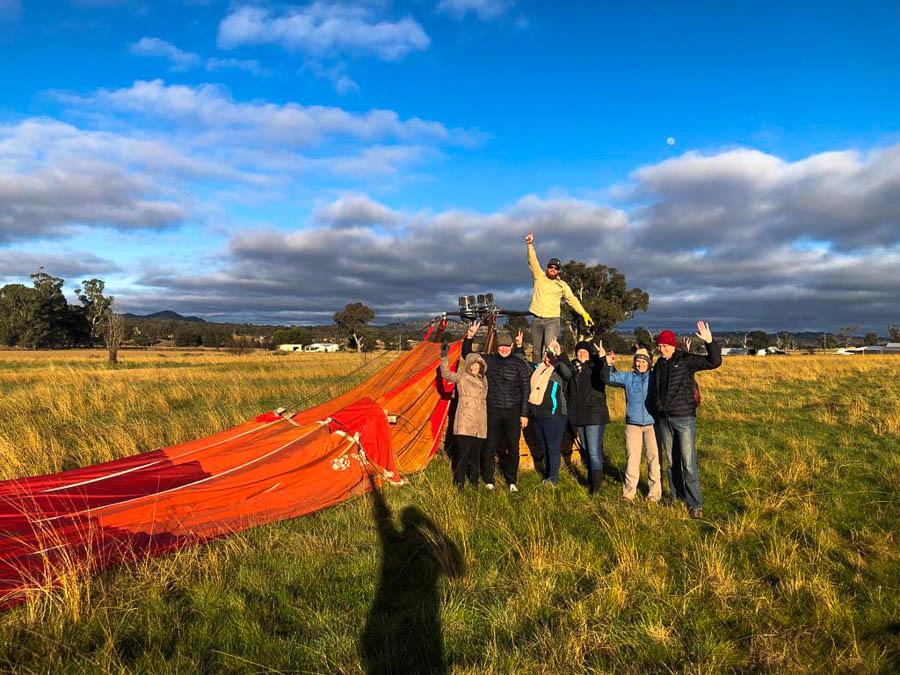 The real work started after that – getting the balloon back in its box, and the basket on the trailer. We had definitely earned our breakfast by the time we got back to Mudgee.

The rest of the day was spent eating and drinking. As you do. 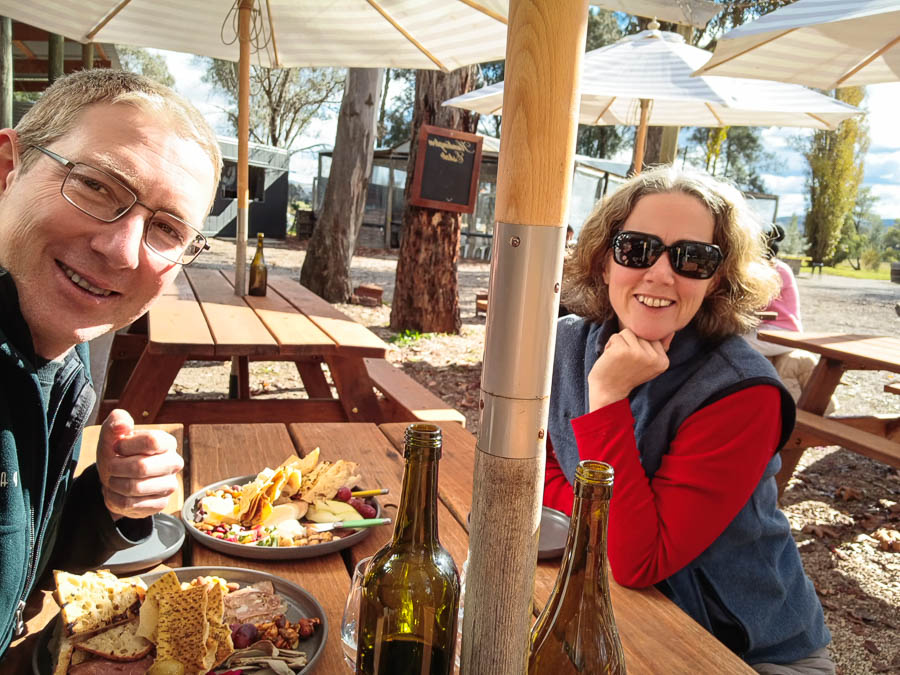 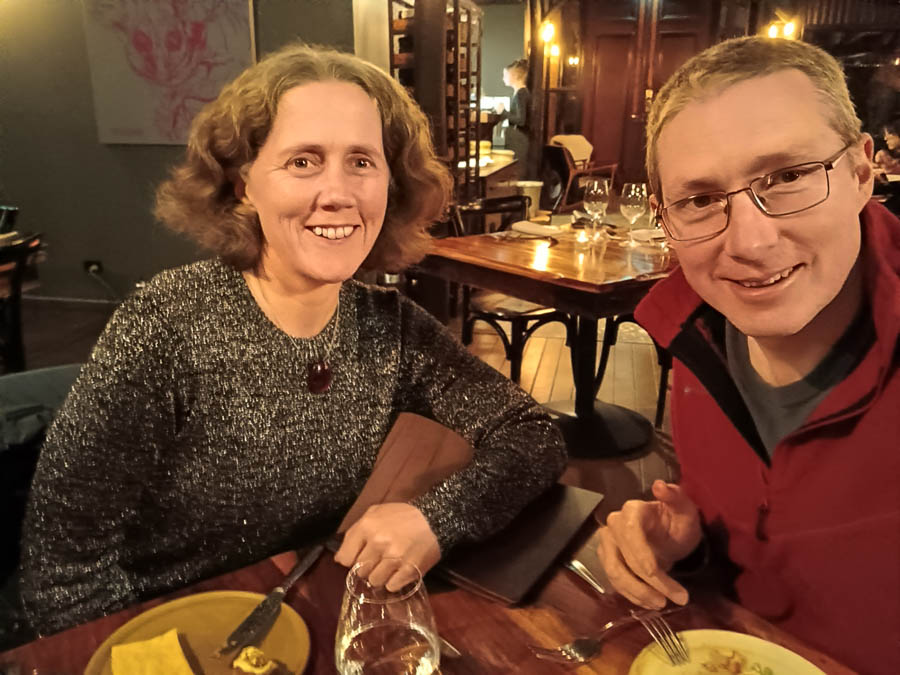 So the next day I decided we really needed to do some exercise. We did the Castle Rocks Walking Track. Tom informed me we’d done it before – but given it was in 2008 I feel like it was reasonable that I didn’t remember it. The walk itself is pretty boring (4km of flat firetrail each way), but the pagodas and views at the end are lovely. 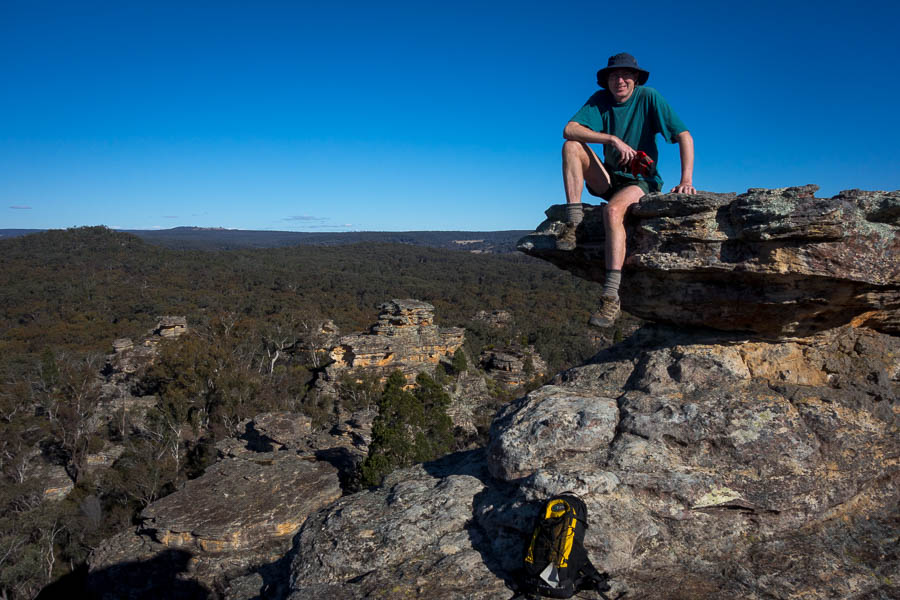 We also checked out the Putta Bucca wetlands – unfortunately (but not surprisingly) no platypus sightings.

On our way back to Sydney on our last day we stopped off and did the Ferntree Gully walk. The signs warned of excessive amounts of mud, and also sections which would require significant fitness and agility. We didn’t experience any of that so I guess we were lucky! While it’s only a short loop it’s a good one which I’d recommend for anyone in the area looking for a hour(-ish) walk. 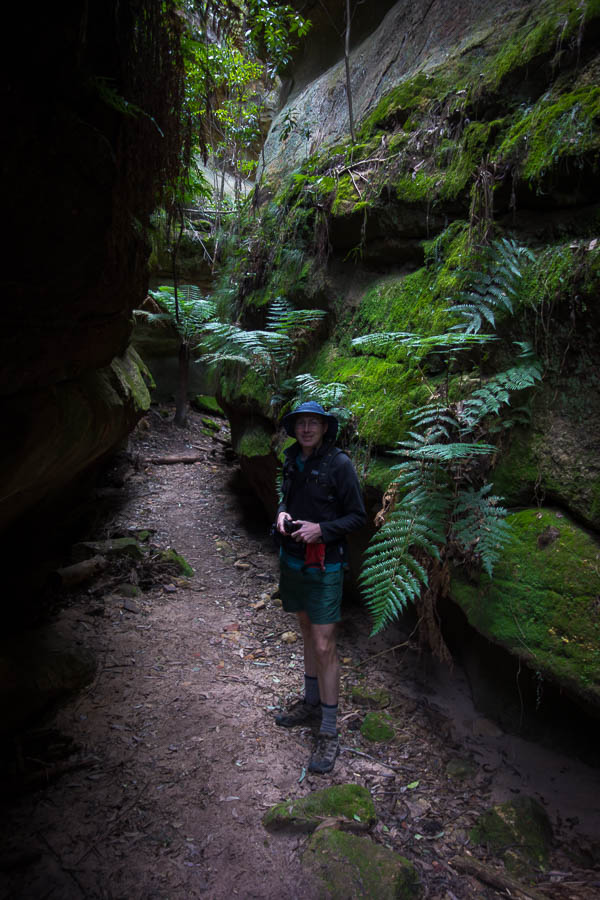 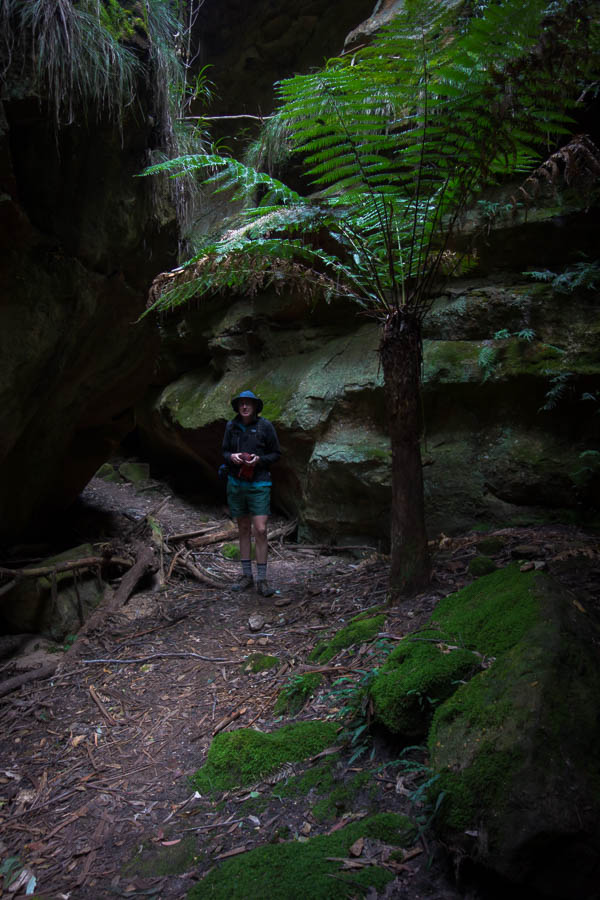 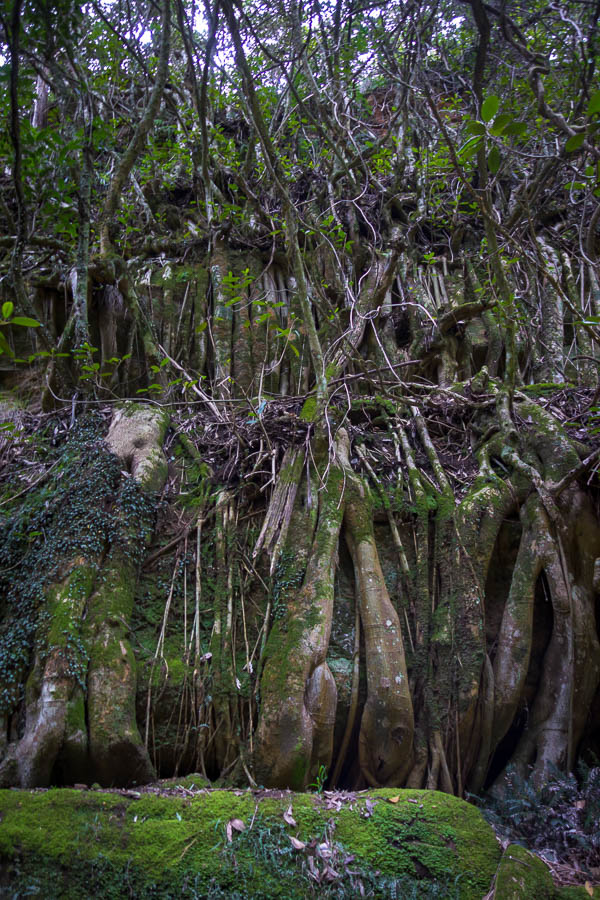 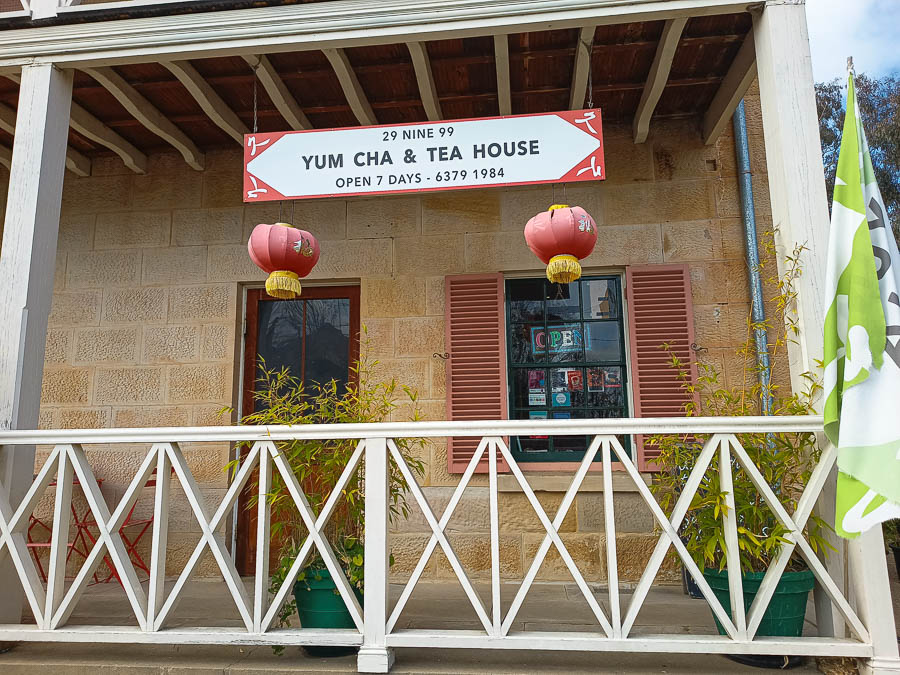 Lastly we visited Hassan Walls Lookout in Lithgow. Hard to believe for the many, many times we’ve been through Lithgow we’ve never been there. Well now we can say we have!

A very relaxing weekend if not overly energetic.