The advantage of planning a walk only a few days in advance is the weather forecast is available. With unpleasant weather moving into the South West of Tassie on Friday afternoon I figured relocating myself for the last two days would be wise. The downside was a four hour drive from the Frenchmans Cap Trailhead to Eaglehawk Neck. That was meant to be done over a relaxing afternoon with plenty of time to stop for coffee, and get to the accommodation I’d booked before dark. As events transpired it ended up being a fairly horrendous drive, mainly in the dark, often in the rain, and I didn’t get to my accom until 9:30pm despite getting to the Frenchmans Cap Trailhead at 11am.

I wasn’t sure I would be that motivated to go walking the next day, but after a few days of waking at 5am my body clock was unaware it was ‘sleep-in’ day. Being able to get up and make as much noise as you want is a definite upside of travelling alone. I couldn’t get going for the walk until 9am when the espresso bar up the road from where I was staying opened. What a great spot! 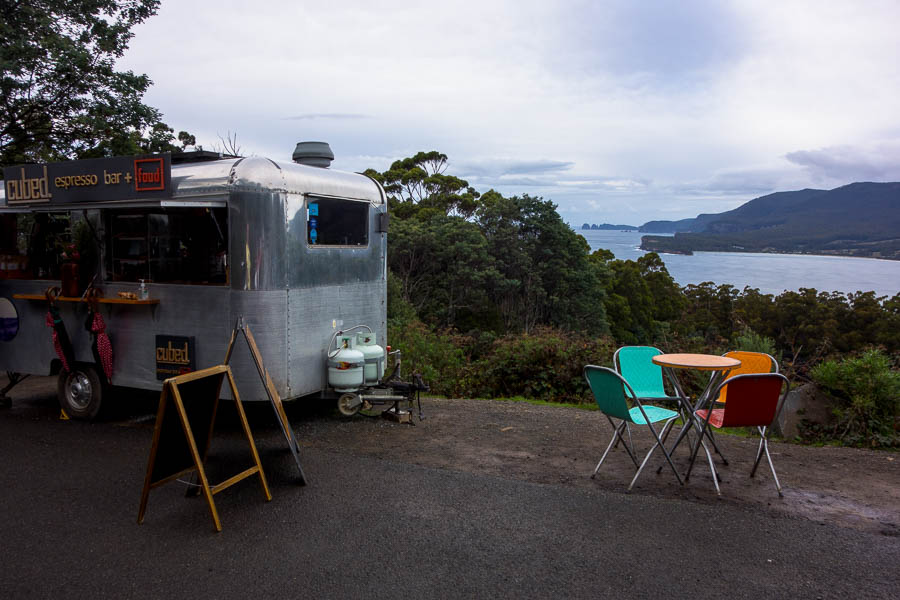 The best way to start the day – coffee & views 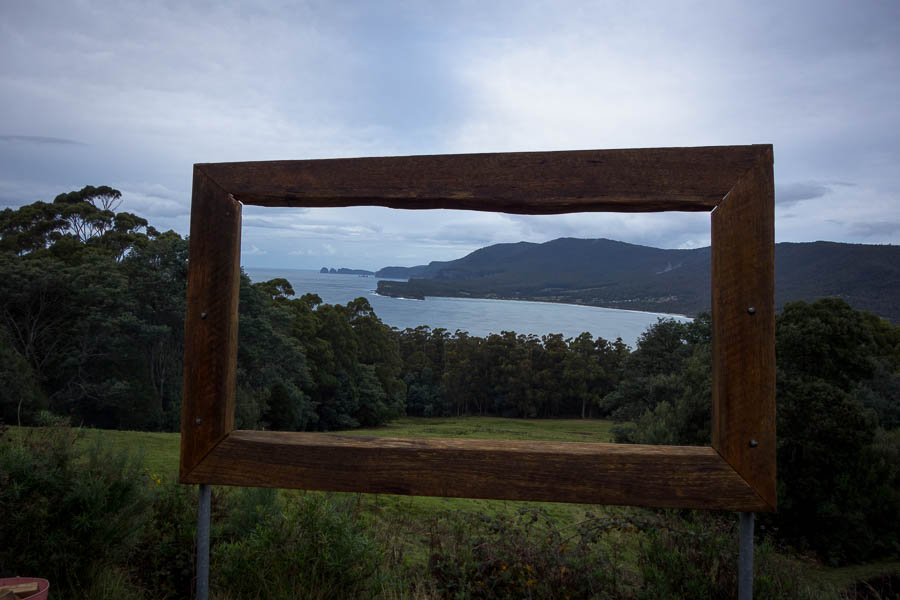 A view worth framing?

Arriving at the Cape Raoul trailhead I was initially a bit confused by the road markings. Then I realised it was spaces all along the road (overflow from the car park) for parking. It must get very busy at times! But today was not one of those days, with only three other cars there. The icy wind blasted me as I got ready in the car park subsequently all my warm layers came with me.

However, the icy wind didn’t last long as almost immediately the trail wound it’s way through beautiful forest. The layers came off, and most of them didn’t get used at all, as the walk is very protected from the elements. 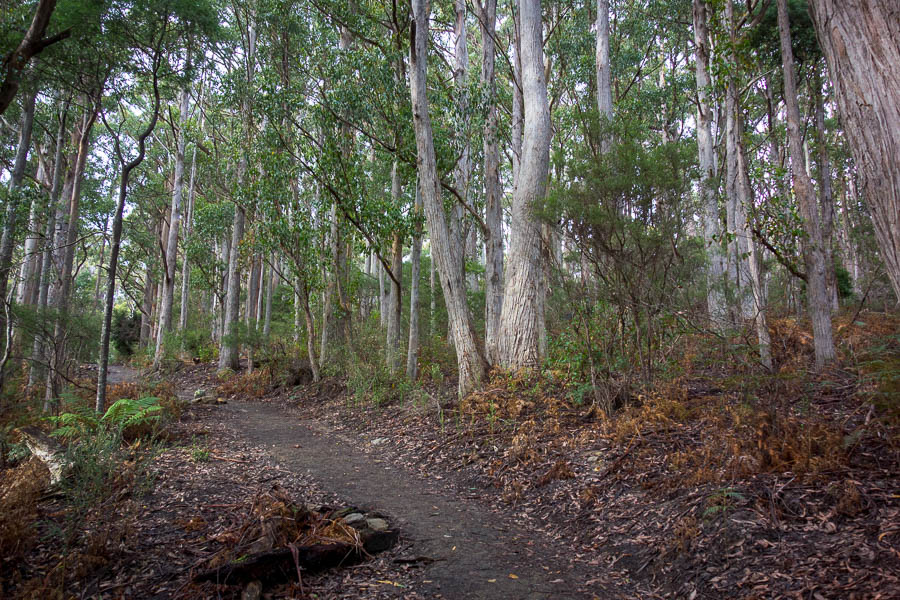 Lovely forest on the way to Cape Raoul 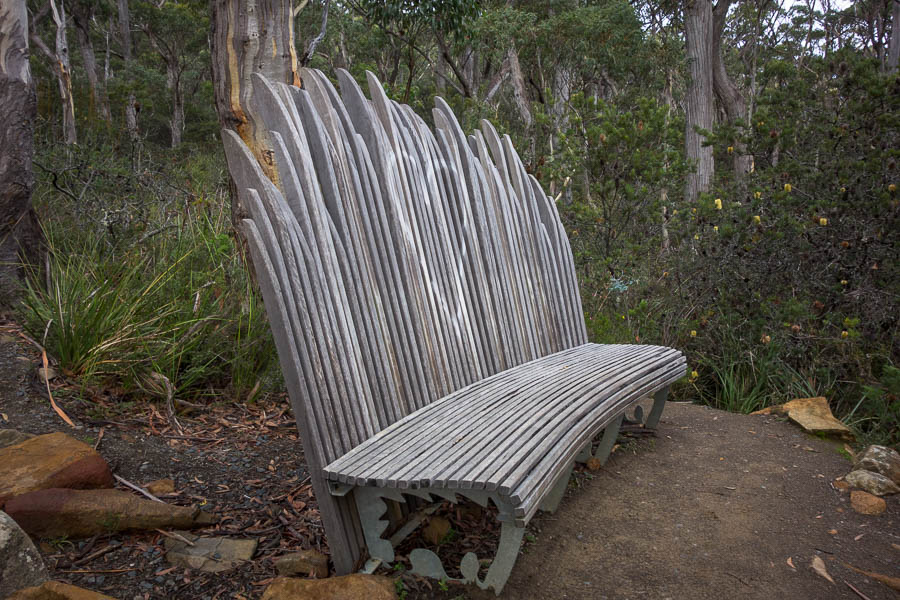 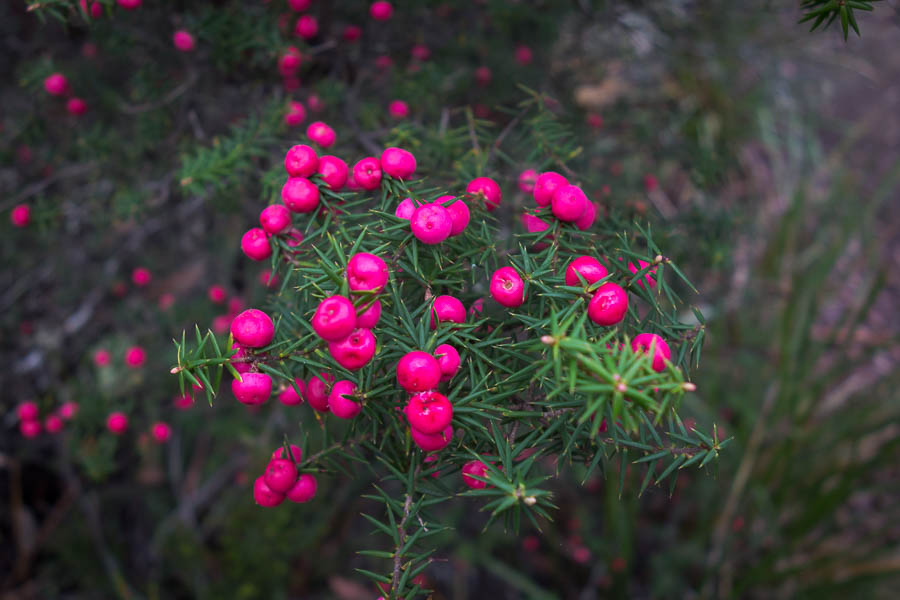 Lots of these were about, making a colourful addition

After winding slowly up to the lookouts the track then slowly meanders down towards the Cape. Occasionally there were spots to get views, but mainly you’re in a variety of vegetation – from tall eucalypt forest through to coastal heath. 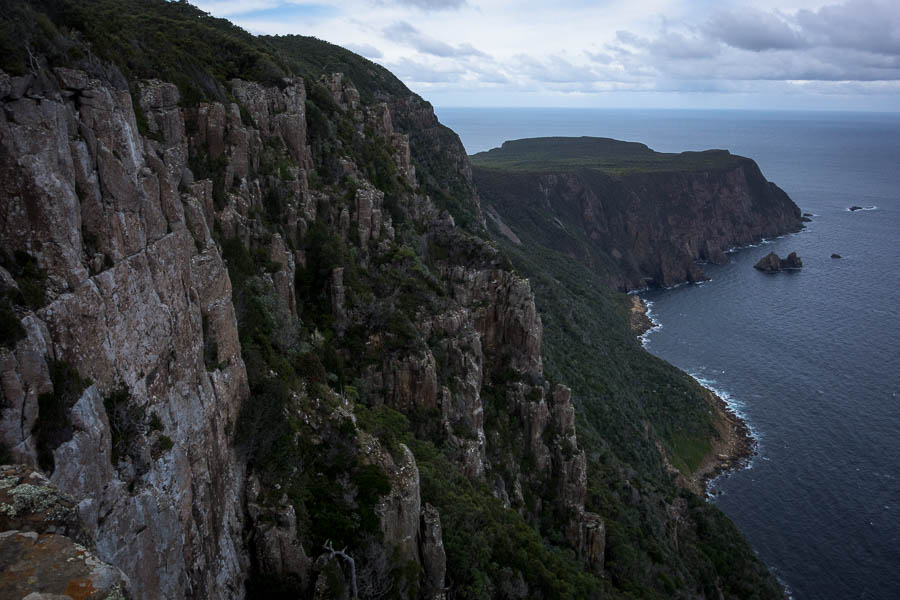 Cape Raoul from the lookout

I was beginning to wonder if I was actually going to see any cliffs when I finally popped out of the heath into a low vegetation area. From there I visited the seal lookout where I had lunch, and provided advice on the Larapinta Trail to a fellow walker, and then the main lookout (I forget if it had a name). 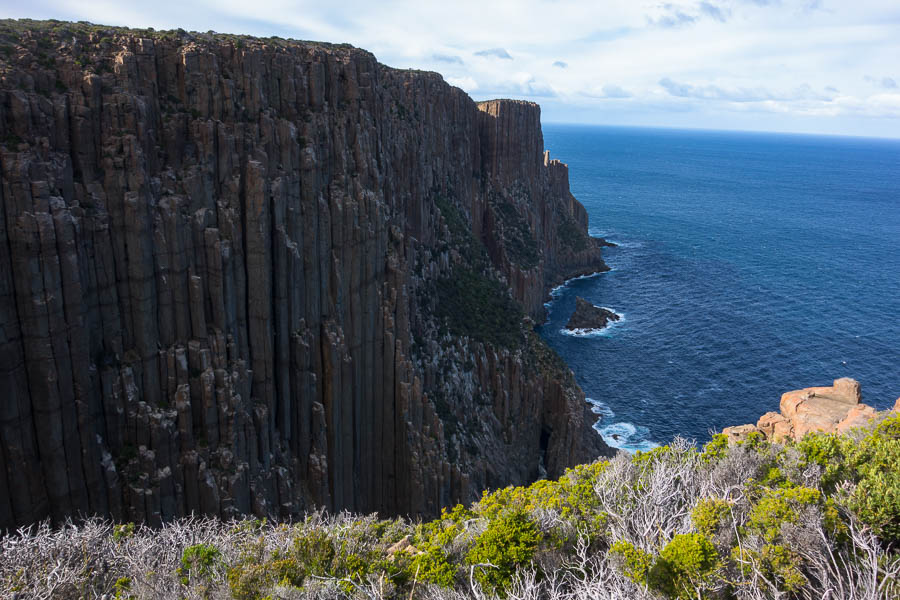 Now this is what I’m here for – Dolorite cliffs 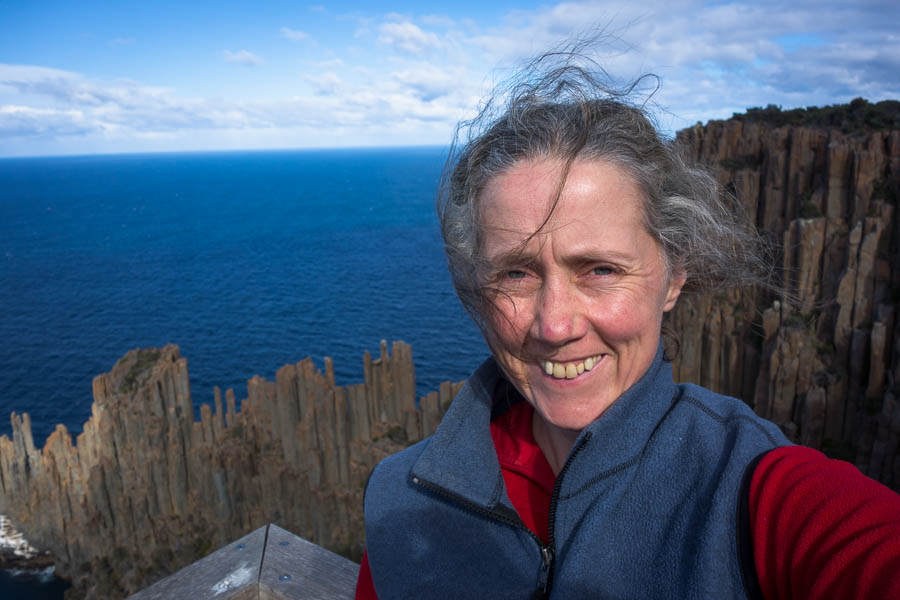 The hordes had started to arrive by this point and I passed lots of people on my way out. It seems my timing was good as I largely had things to myself. There was more up and down than I was expecting on this walk but it was all on gently graded well maintained tracks – so my knees were never under much pressure.

The rest of the afternoon was spent at the Unzoo, which is a Tasmanian Devil retirement village. I fortuitously arrived just before one of the Tasmanian Devil feedings, where we got to see the destructive power of those jaws in action. 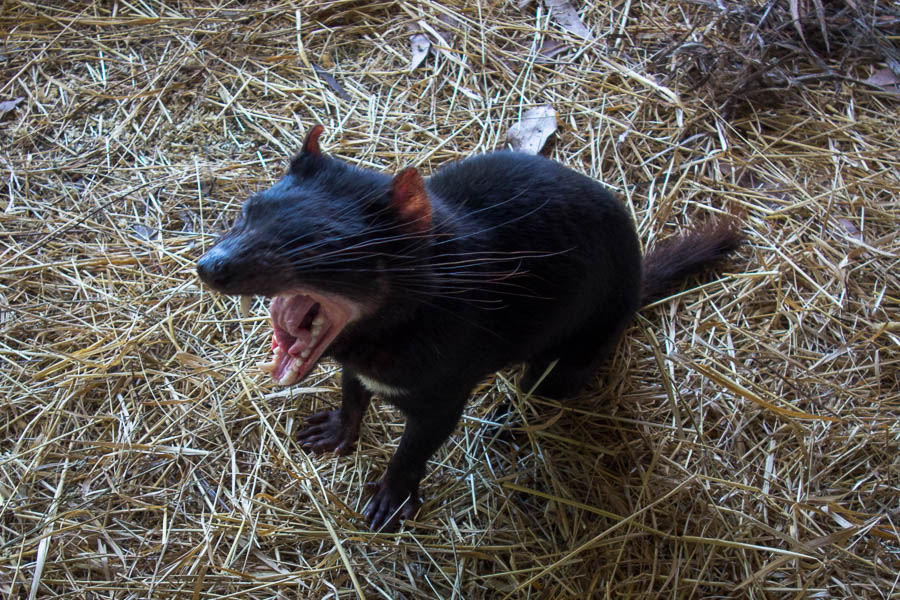 Check out those teeth 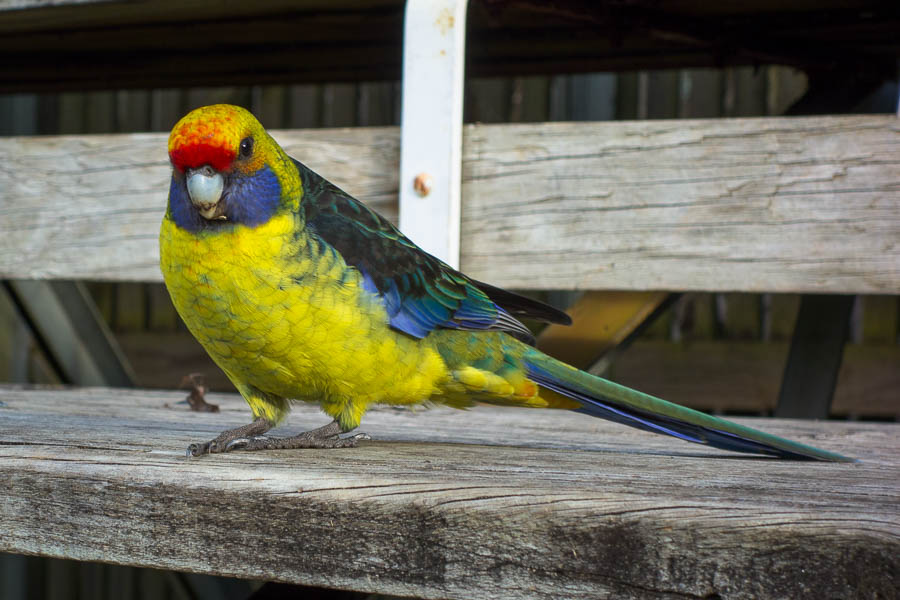 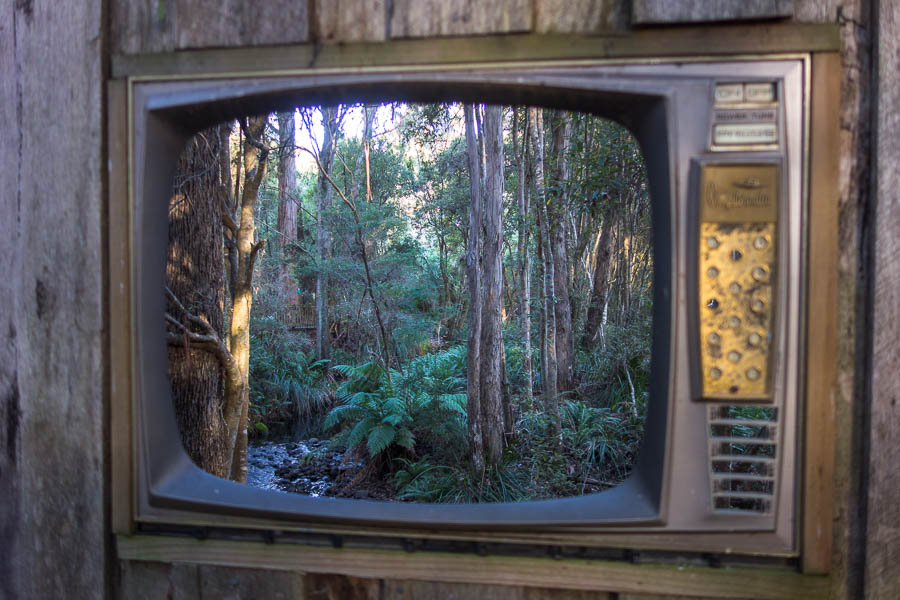 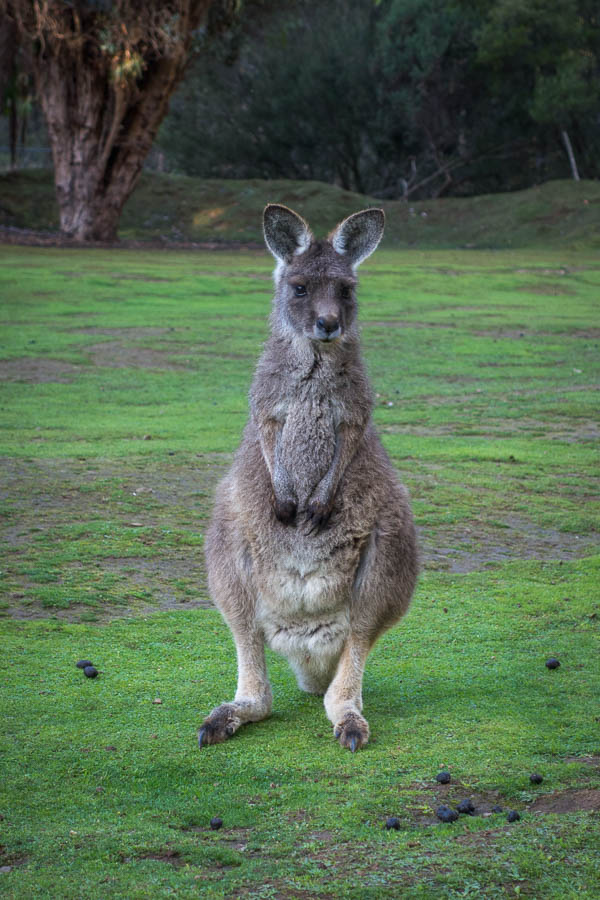 Who do you think you’re looking at?

Chatting to a few people through the day I had got the definite theme that Cape Hauy, my intention for the following day, was hilly/had a lot of stairs. I hadn’t done any research into the walk so that came as a little bit of a surprise to me. That evening I decided I better plan my day backwards from the flight departure time. If Cape Hauy did take me 3.5-4 hours, as most of the web information suggested, then I needed to get moving early. I wasn’t keen to have a stressful day worrying about making my flight. As it turned out I was awake early again so I got away with some time to spare in the schedule. The road out to Fortescue Bay was in surprisingly bad condition, but being so early I could be relatively confident of no other traffic and could dodge potholes as needed.

I’m not a beach person but Fortescue Bay was stunning. It was another surprisingly beautiful morning given the forecast was for a cloudy day. My research had advised me there were around 2,500 steps on the walk so I was mentally prepared when I hit the first lot. 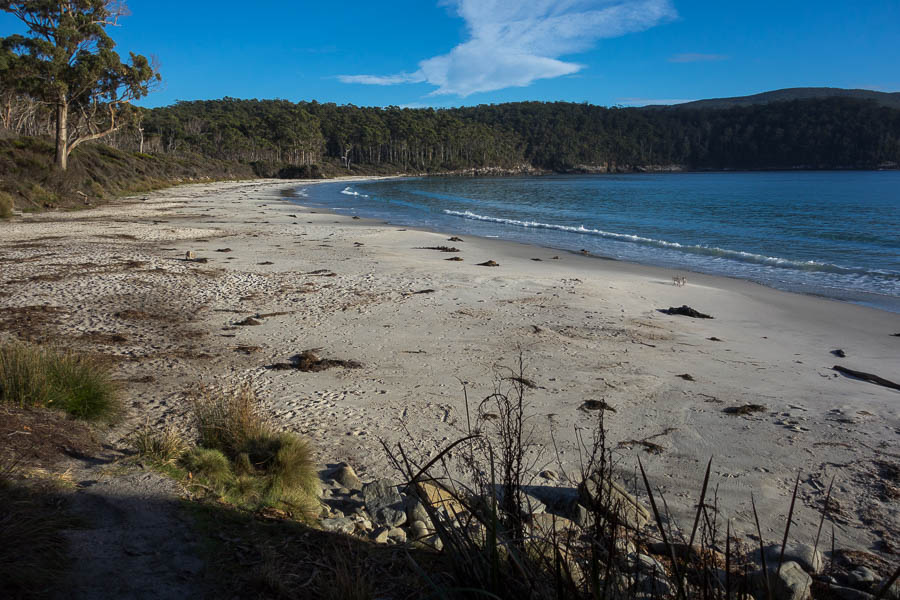 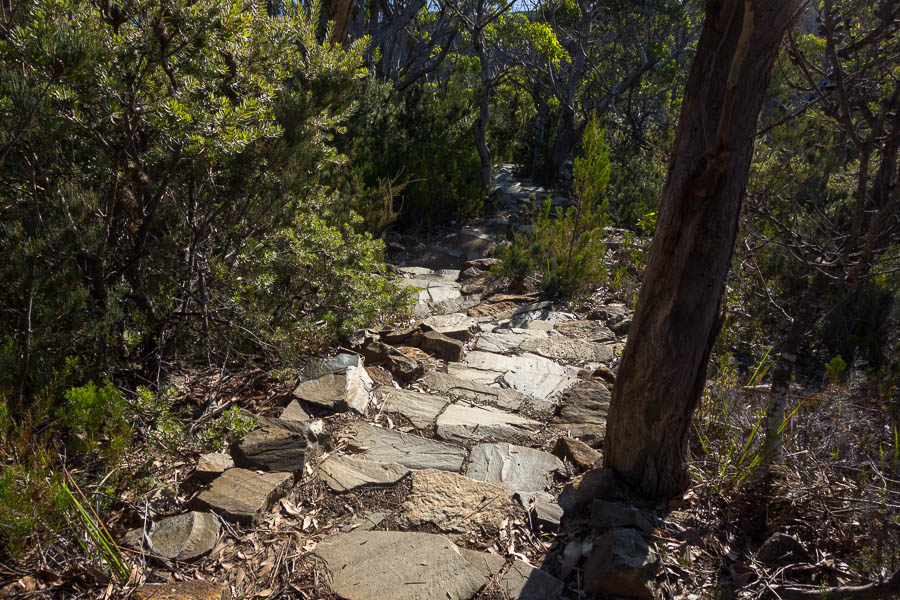 Some of the many thousand steps on this walk

I realised that I was going to be well inside the time estimates when I reached the junction with the Three Capes track after half an hour, and the sign board said it would be an hour back to Fortescue Bay. I’d like to say that meant I slowed down and enjoyed the views… well maybe just the latter! 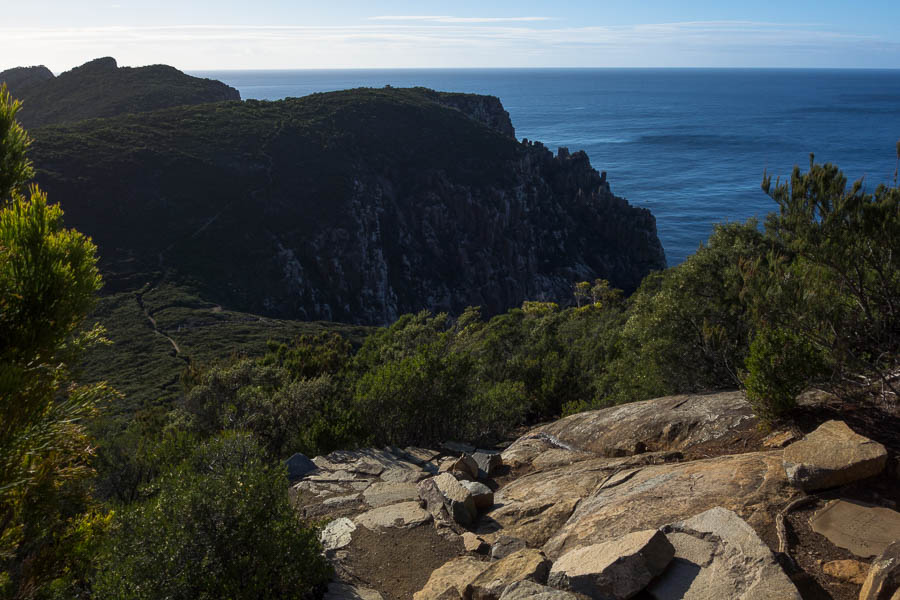 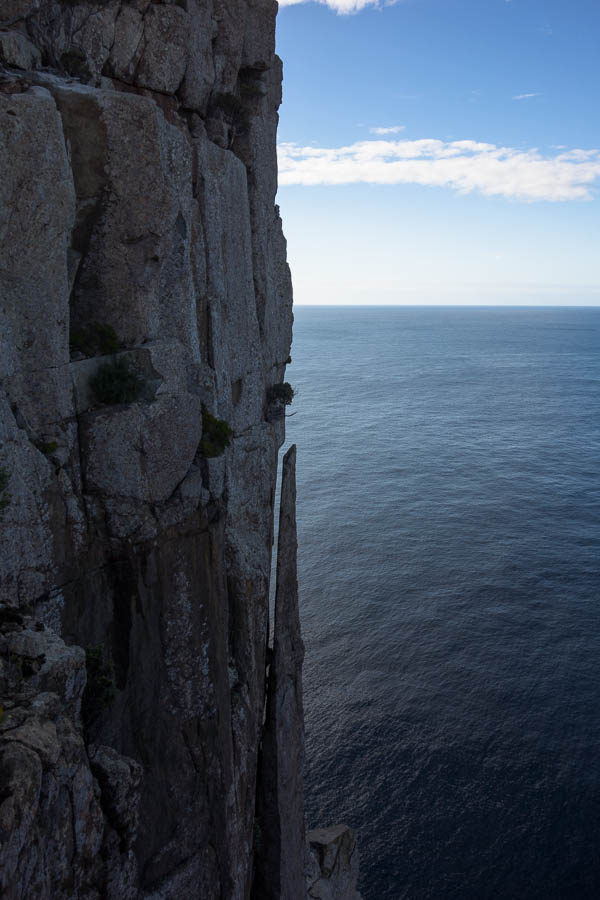 When I got out to the end of the track I was excited to see The Totem Pole in real life, after watching plenty of climbing films about it. I was intrigued that a Tyrolean Traverse was set-up, and wondered if that was permanent. I scrambled someway down the climbers track for a better view before returning to the safety of the official lookout fence. It was only when I noticed the rope moving in a non-wind affected way that I realised there were climbers down there.

I spent the rest of morning tea watching the first climber trying to abseil down the Totem Pole (seemed to be having some rope management difficulties), and the second climber doing the traverse. The notes on one of the climbing sites say “Equip yourself not only with the necessary gear but also a bottle of bravery pills. The challenge is psychological as much as technical.” Just watching the traverse I could definitely see how much your mental state would need to be up for it. 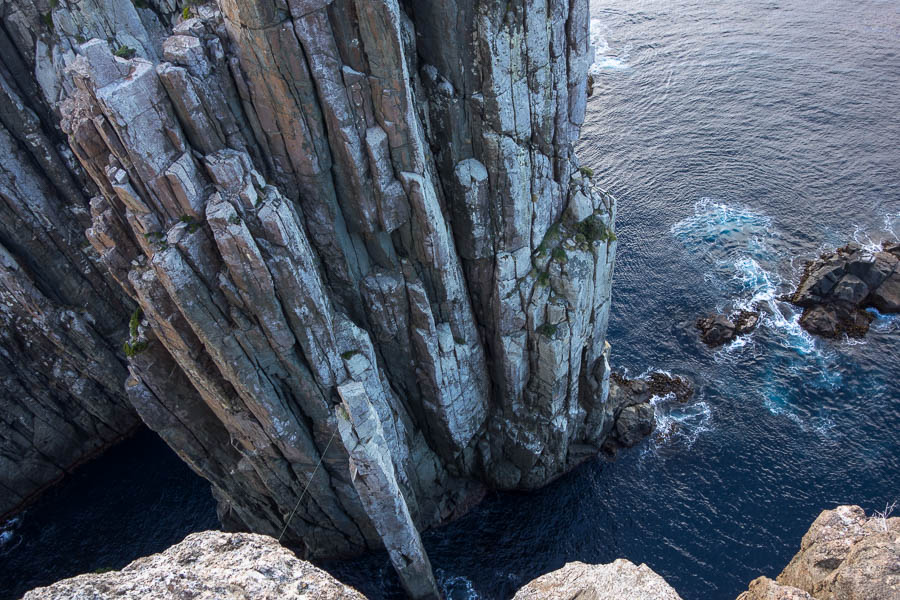 The Totem Pole and The Candlestick. Note Tyrolean line in place 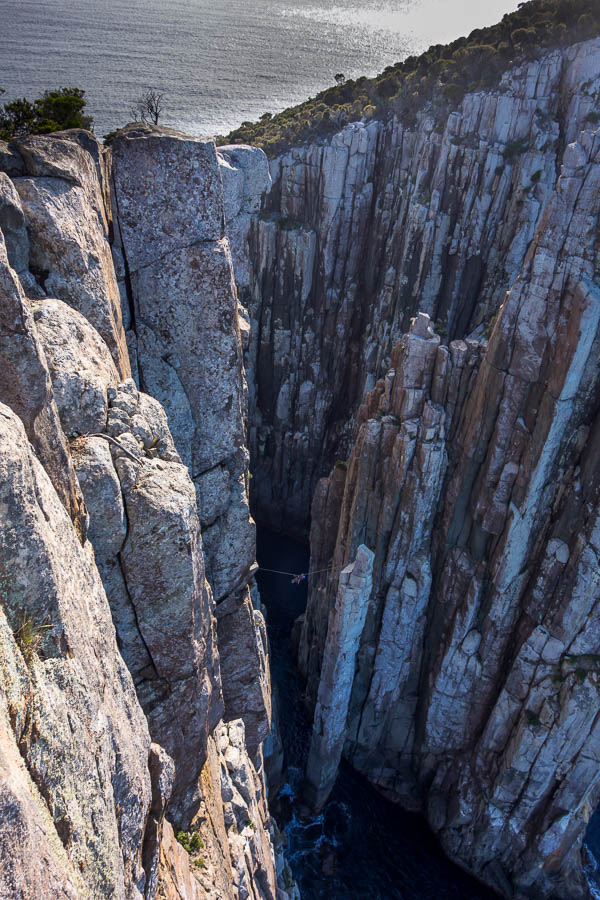 Climber on the Tyrolean traverse

A couple I’d passed earlier on arrived so I took that as my time to head off. Much like the previous day it seemed I’d just avoided rush hour – passing numerous people on my way back to Fortescue Bay. 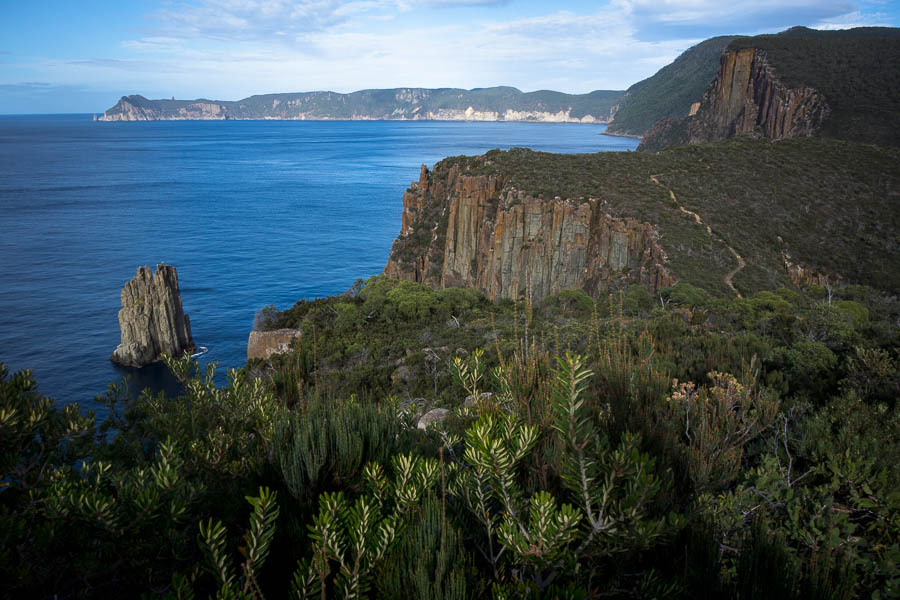 Cape Pillar in the distance,The Monument off the coast, the track clearly visible on the right

Time taken: 2.5 hours return, including 30 minutes at the lookout. The Parks Office was happy to take my partially used gas cyclinder, so with all loose ends tied up I had a stress-free drive to the airport. This walk was a great end to my whirlwind trip to Tasmania!