With just one overnight walk (and it was only a half-day each day at that!) under our belts in the last six months, the obvious next step was a 4-day trip in the Ettrema Wilderness. So for the first time in many months the alarm went off at 5:30am and we were on the road.

We were somewhat bemused to get flagged down on Tolwong Road by a guy carrying jumper leads. He was parked 3km further along the road and had a flat battery. I’m not sure what he would have done if we hadn’t come along – a bit more difficult to convince someone from the main road to come and give him a jump start – whereas it wasn’t out of our way at all. With his car started, we left him to drive drive out and sort out his battery, and continued on to where we would leave the car while we were walking.

We took a new route (for us) into Ettrema Gorge. The regrowth wasn’t too bad and after a couple of hours we were having a rather bracing dip in Ettrema Creek. 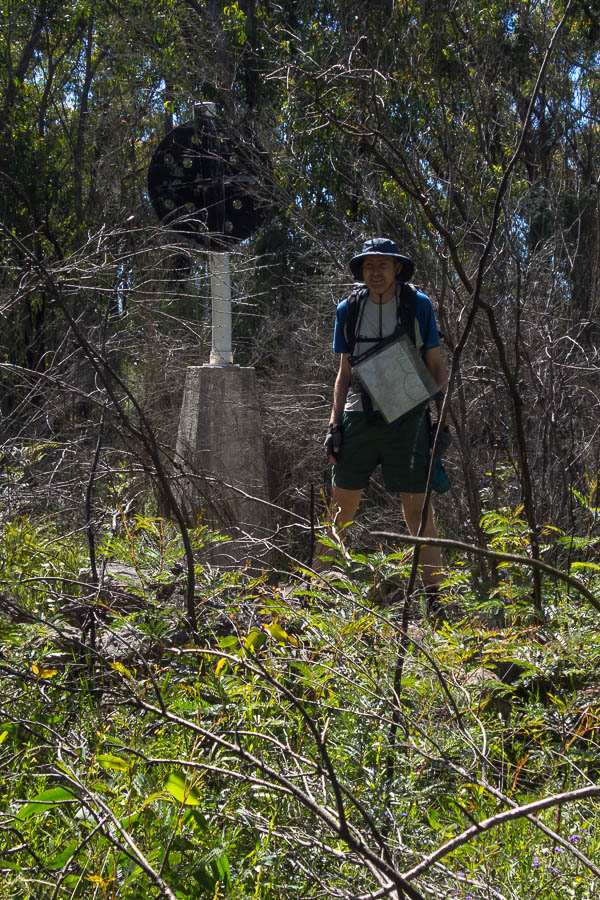 We found a trig! 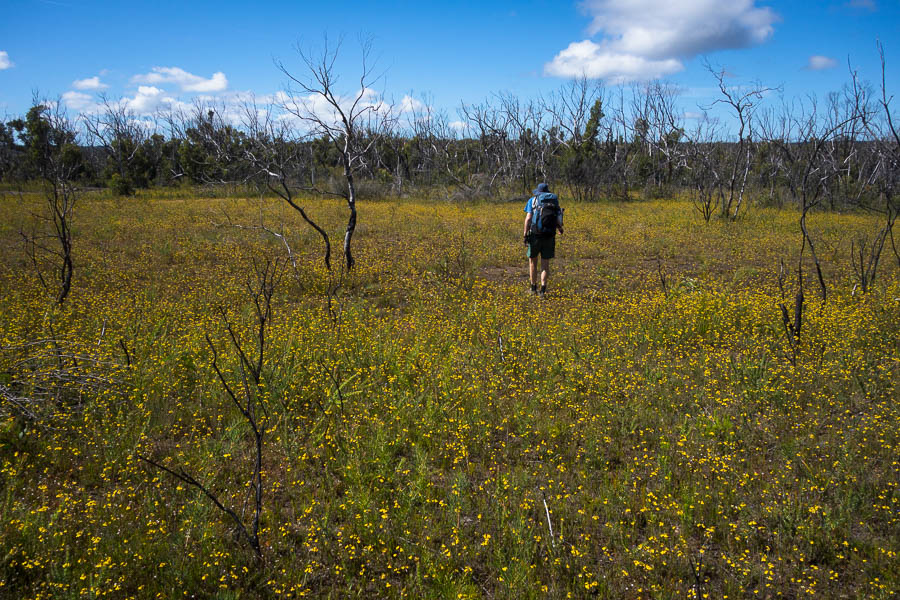 Walking in fields of wildflowers 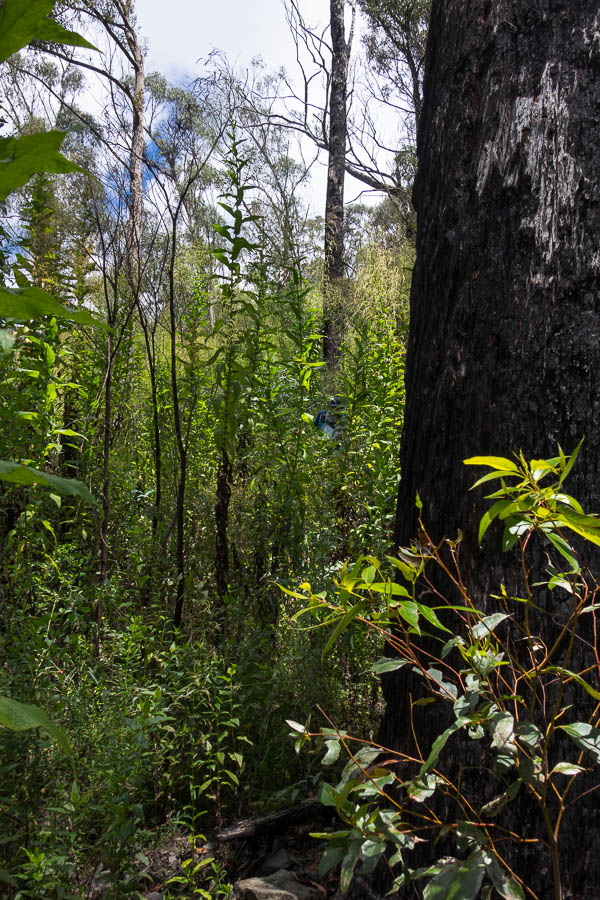 Some slightly less pleasant vegetation to walk through 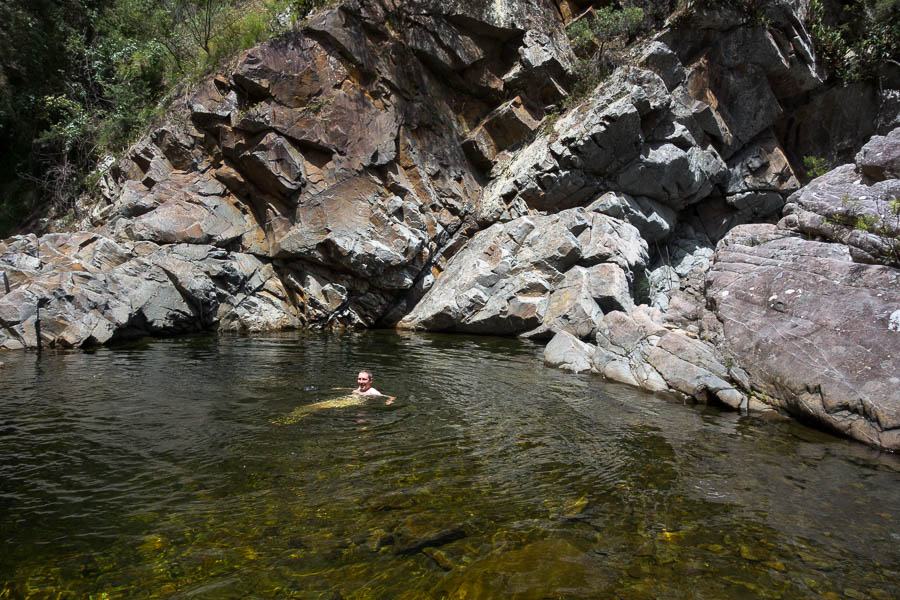 After lunch we started our ascent out of the other side of the gorge. We managed to negotiate our way up a side creek for someway, before being forced out and up some loose scree slopes to avoid a large waterfall (or two). 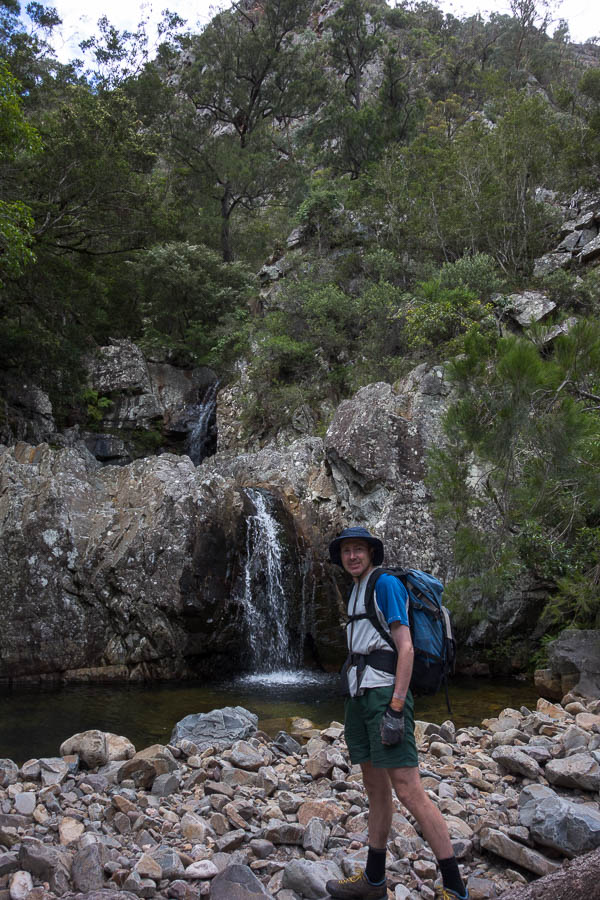 We’re going up there… somehow? 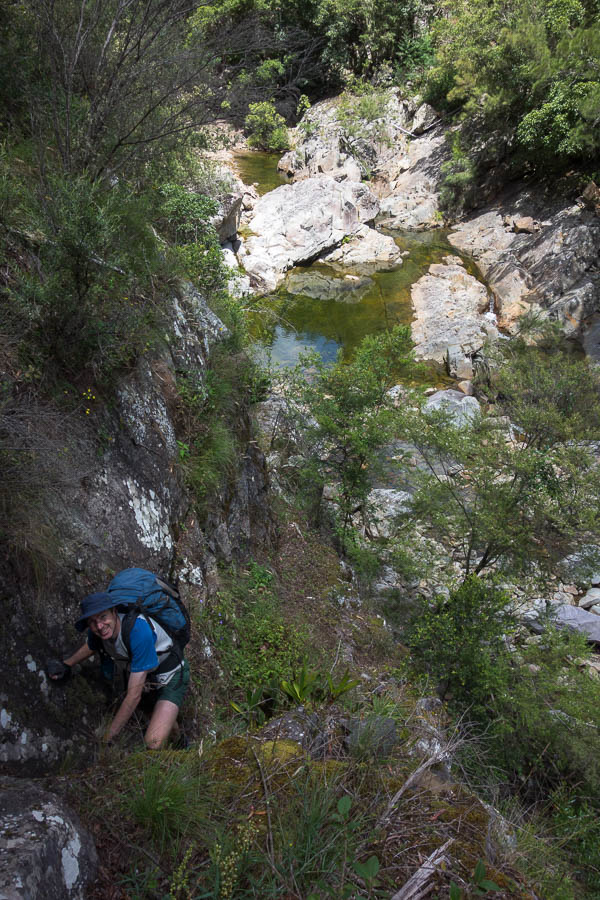 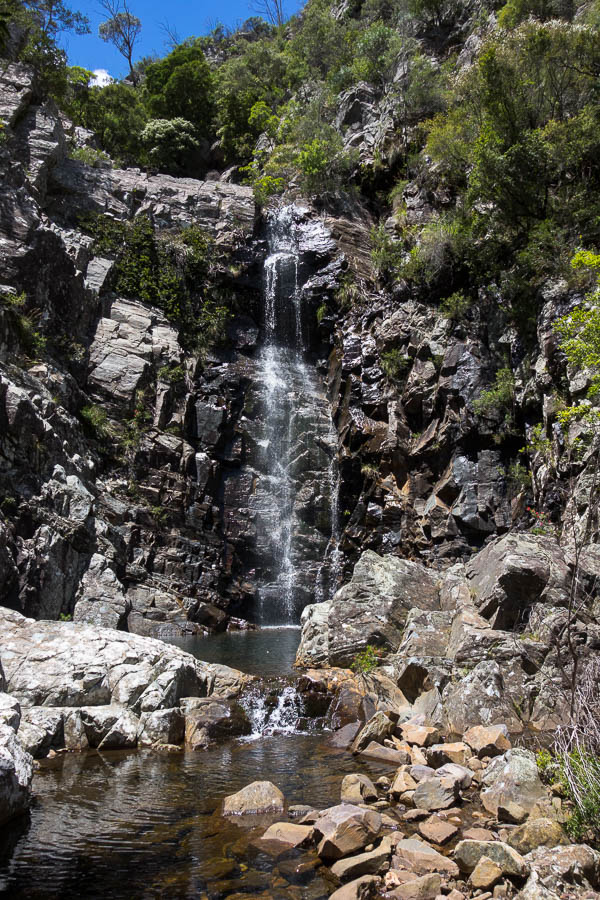 Don’t think we’re climbing up that

Eventually we made it to the tops where we we had a mix of pleasant walking through fields of wildflowers, combined with some less pleasant sections. 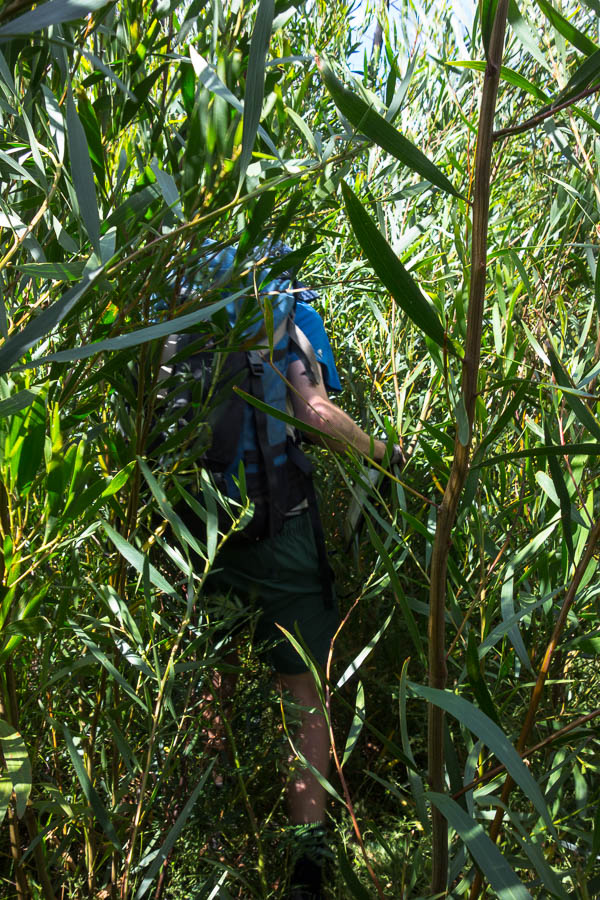 On the tops some of the vegetation was a little challenging 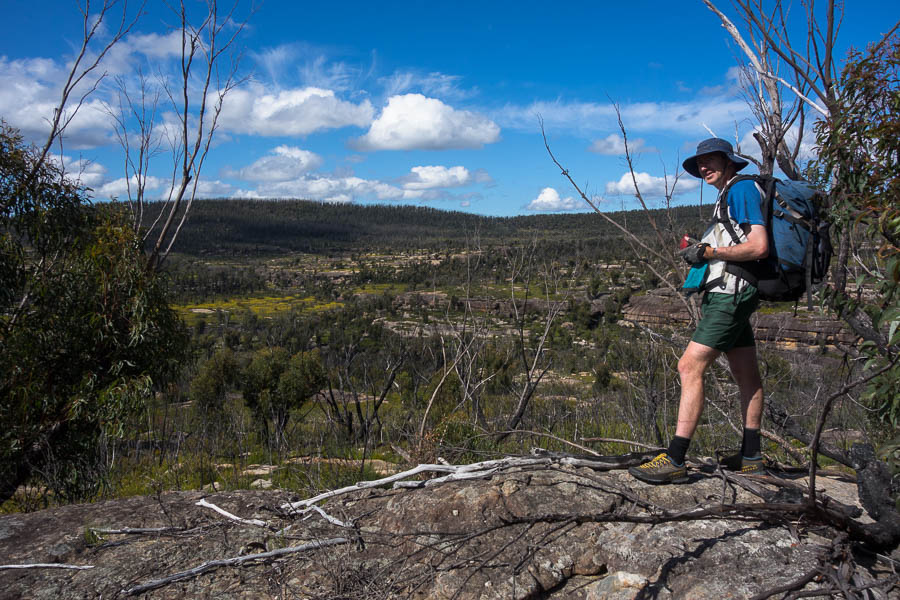 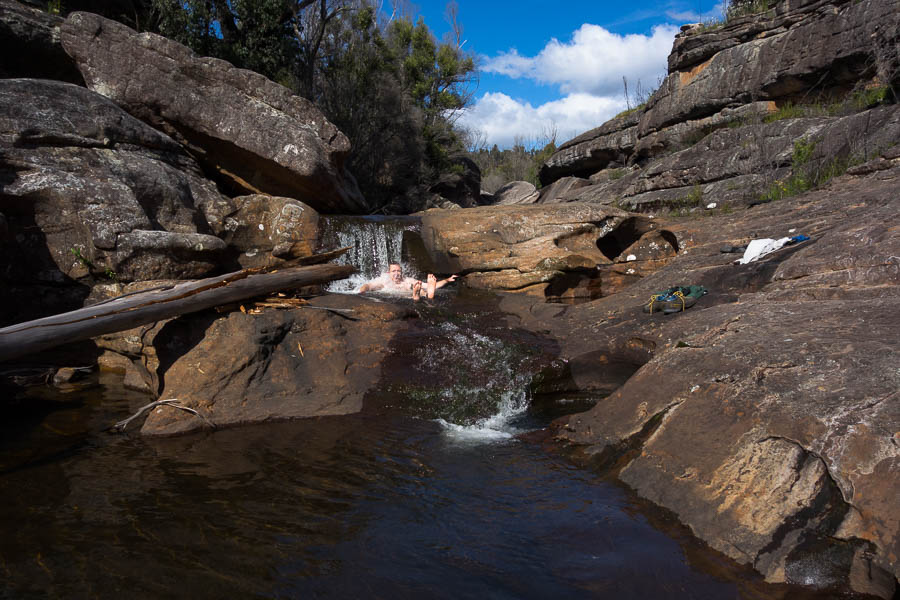 I had been trying to convince Tom that we should just camp on the plateau we were crossing rather than drop down into Jones Creek and then out again. I didn’t have particularly good memories of the end of the Pauls Pass Walking Track from my visit the previous year. Fortunately, I let Tom have his way. We found some excellent views and a passable (if not completely flat) campsite. I realised in retrospect I had only visited the West/South-West side, rather than the North-West – which actually had a view of Tingha Falls. Plus the day I was there it was so windy I could barely get near the edge for fear of being blown of! Fortunately the weather was far more agreeable this time round. 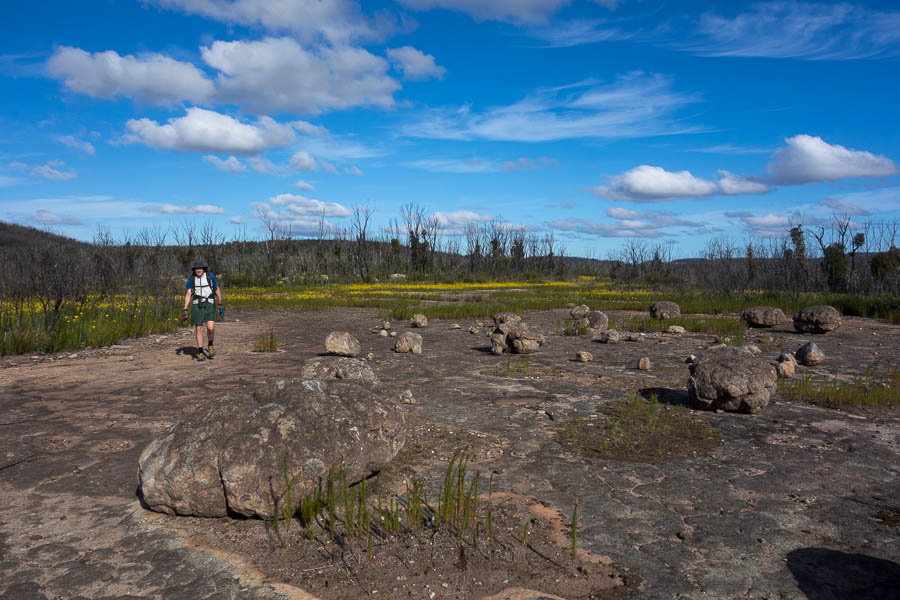 The end of the Jones Creek Walking Track 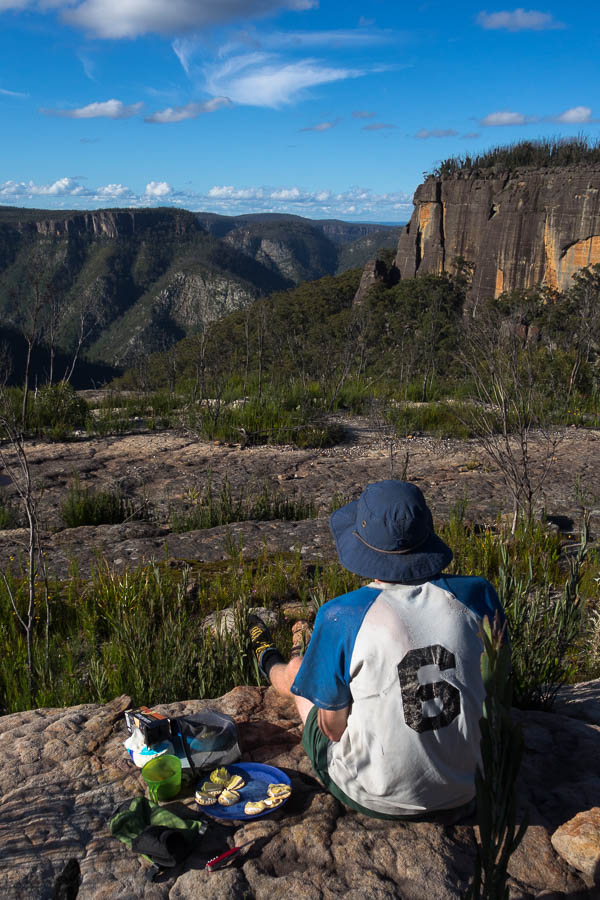 Tom in his happy place 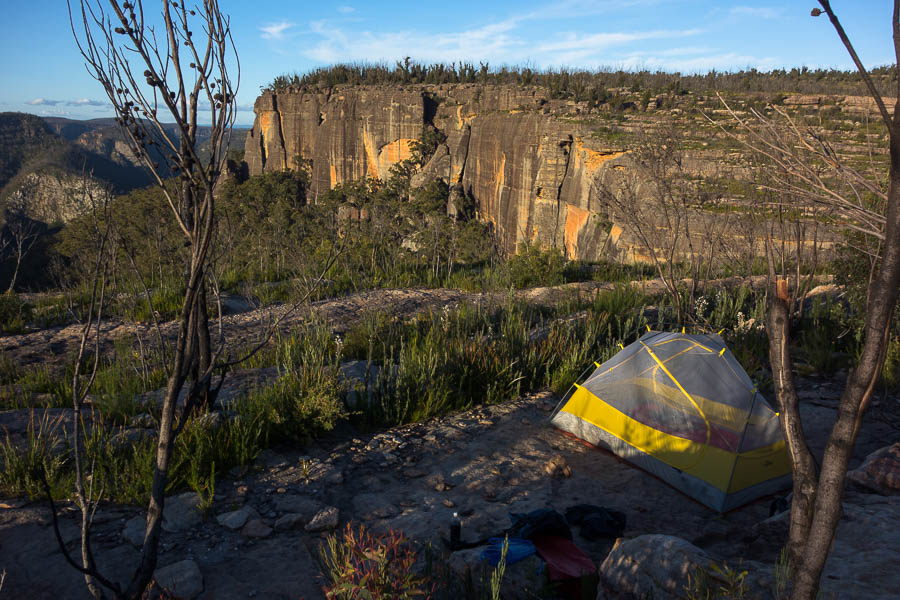 Camp with a view

The next day we returned to Jones Creek and explored up stream until I insisted we turned round, since Tom had been talking up how long a day we might have. Reunited with our packs we then headed downstream. There were so many lovely cascades and pools – I haven’t included many photos so they probably don’t do it justice. At times it was hard going up and around large boulders, so don’t be deceived into thinking it was just a cruisy romp! 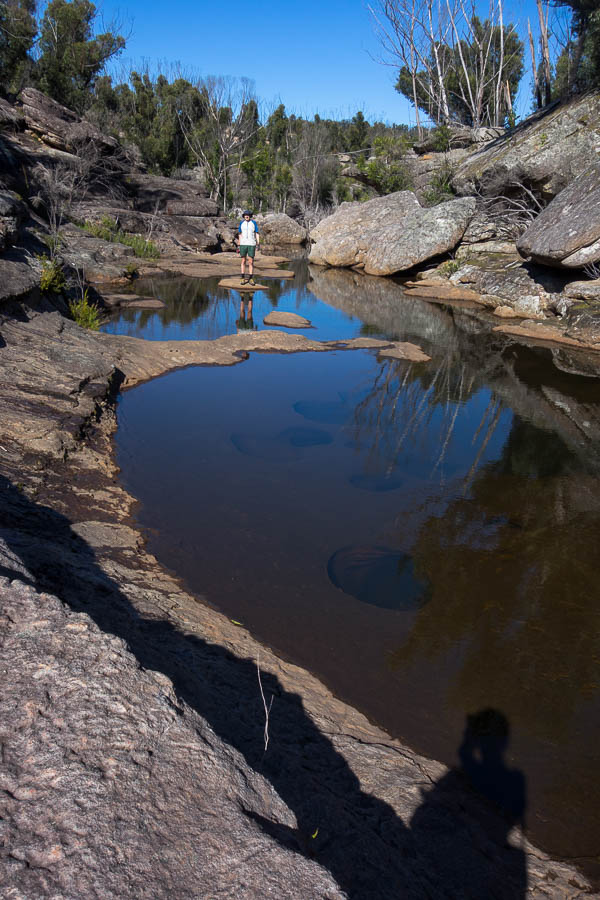 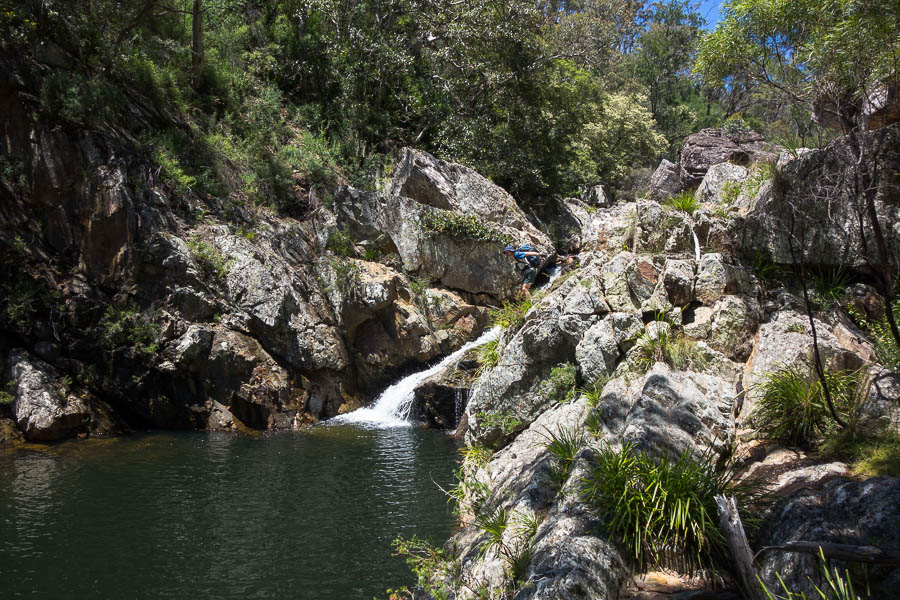 Eventually we found ourselves at the start of the main drop (Tinga or Tingha Falls? Not actually sure where Tom got that name from…). We managed to scramble down the first few levels until we came to the main sheer drop. No going down directly so we examined the traverse required to get around it. I estimated at least an hour – and was spot on! It was “easier” than I anticipated – which is to say I didn’t feel like I was one small slip from catastrophe for much of it. A swim and late lunch at the bottom was lovely. 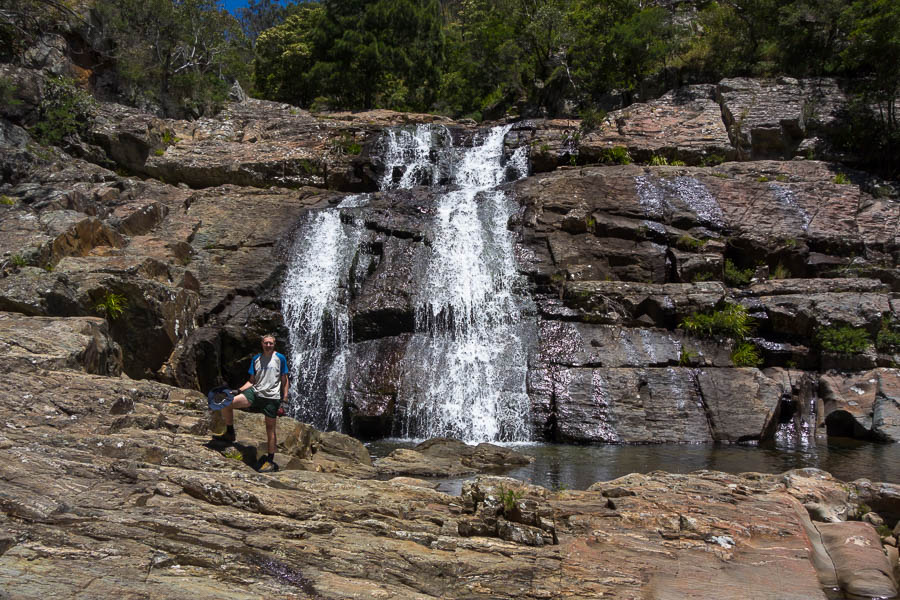 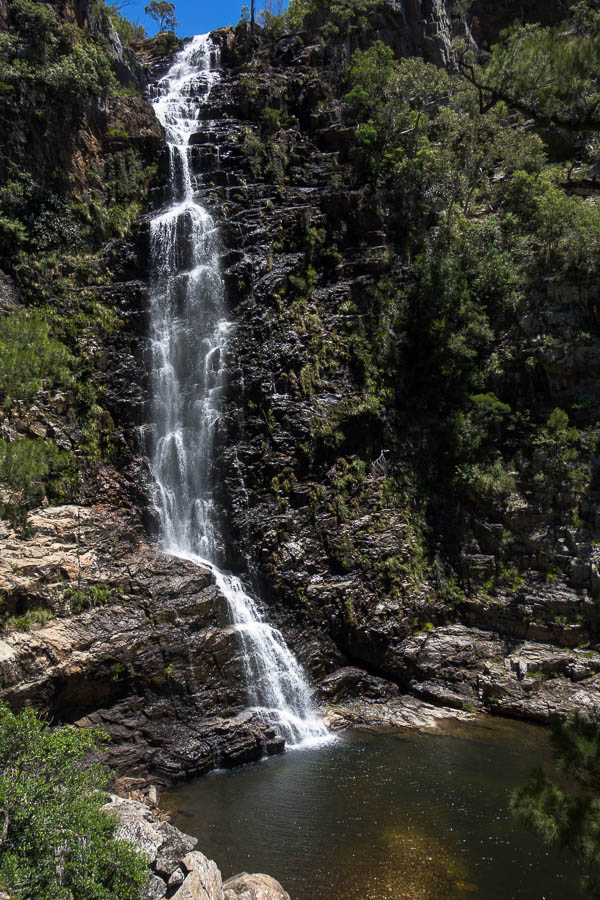 Tom had been to the bottom of the Falls back in 2005. Looking at the topo Jones Creek only dropped a further 120m from there to the junction with Ettrema. Tom assured me there was no other major difficulties in the rest of the creek. I was a little surprised when we had a bit more serious scrambling to do, and as we approached some of the drops they seemed unlikely to go. But as had been the case for much of the day the terrain gave way…. until it didn’t. Not long after leaving the base of the main falls we found ourselves at the top of a 4m drop with no obvious way down. Tom scrambled up on the true left to see if we could climb around but came back without finding a way. Anything which was wet in the creek was very slippery and the ‘obvious’ route down would have required negotiating a fair bit of wet rock. We had a handline but there was a paucity of rigging options. It seemed clear back in 2005, at the height of the Millennium Drought that scrambling up would have been straight-forward, but in our current La Niña weather pattern that wasn’t the case.

We were left with 3 options; 1) jump into a pool of unknown depth, with what seemed to be a relatively narrow landing zone, but looked “ok” 2) try and negotiate the wet waterfall where slipping was likely to have a nasty fall onto sharp rocks or 3) reverse back up Jones Creek and try and find an alternative way down. Option 3 was unpalatable – we’d already been going for 6 hours, and it was a hot day. Reversing would take many, many more hours. After a fair bit more prevaricating I volunteered to jump first since I was lighter – though if it had gone wrong we would have been up the proverbial without a paddle. Fortunately the pool proved fairly deep and we chose our landing spot well. Having had a bit more excitement then we’d wanted we continued on. 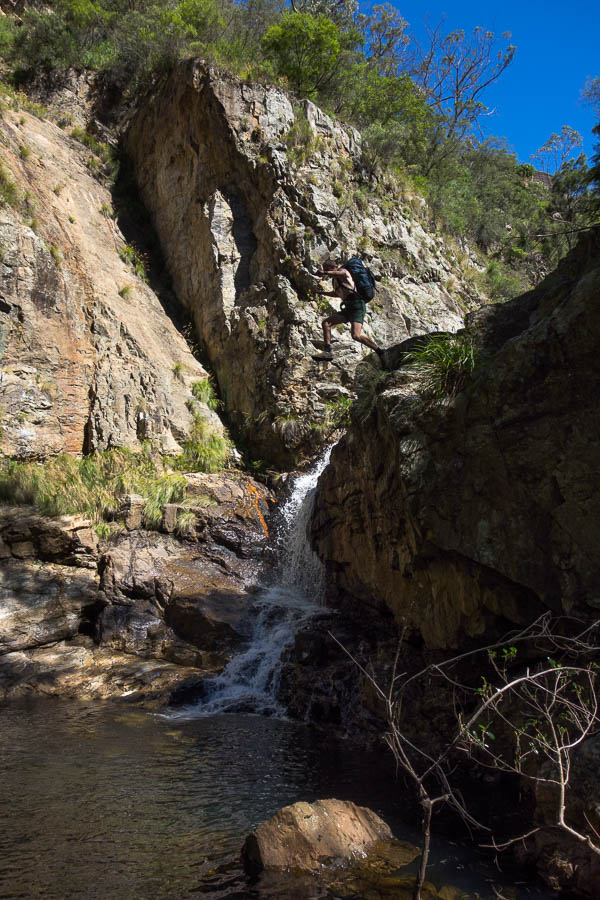 The other risk with jumping was that we had committed ourselves to going forward. What if there were more drops which had been negotiable in drier conditions which now weren’t? We did encounter a couple more which required climbing out of the creek and around bluffs to get down – but those seemed to be regular routes and we negotiated them without issue. As we got closer to the junction we started seeing footprints that were only a day or two old. I didn’t really want to think about what we’d have to do if the campsite was already occupied. It has been a tough couple of days – especially given our current fitness levels. Relief all round when there was no one in sight at camp! 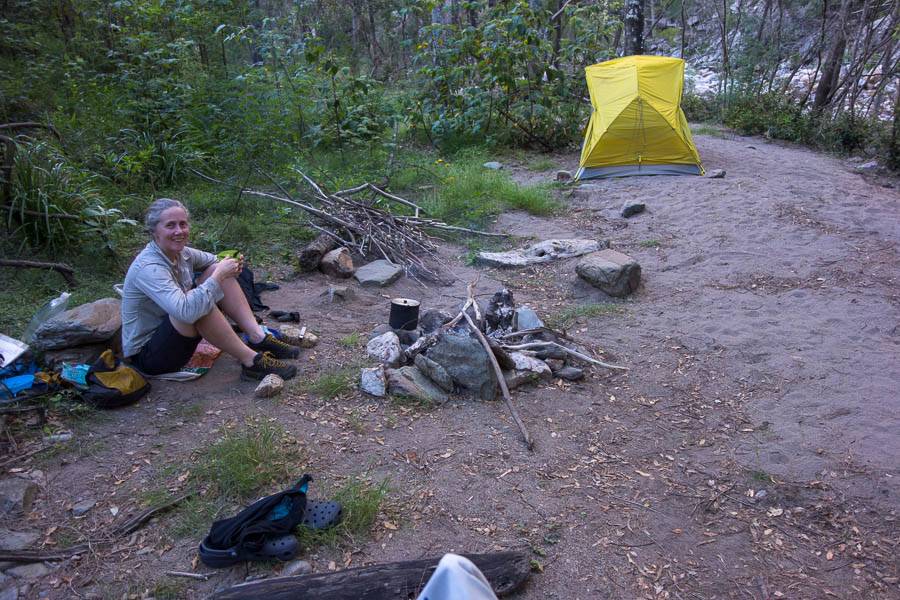 We made it to camp!

Originally we had thought to make our way up to Myall Creek the following day, but we concluded for the effort of moving camp, for all of an hours walking, we may as well just stay put. We rose late, had a leisurely breakfast, did some crosswords, had some swims. I spent time with Catherine and Heathcliff (smallest unread book on the book shelf!). The day passed very quickly – the laziest day either of us could remember having in the bush. We made it to bushwalkers midnight (and therefore New Year) before retiring to bed. 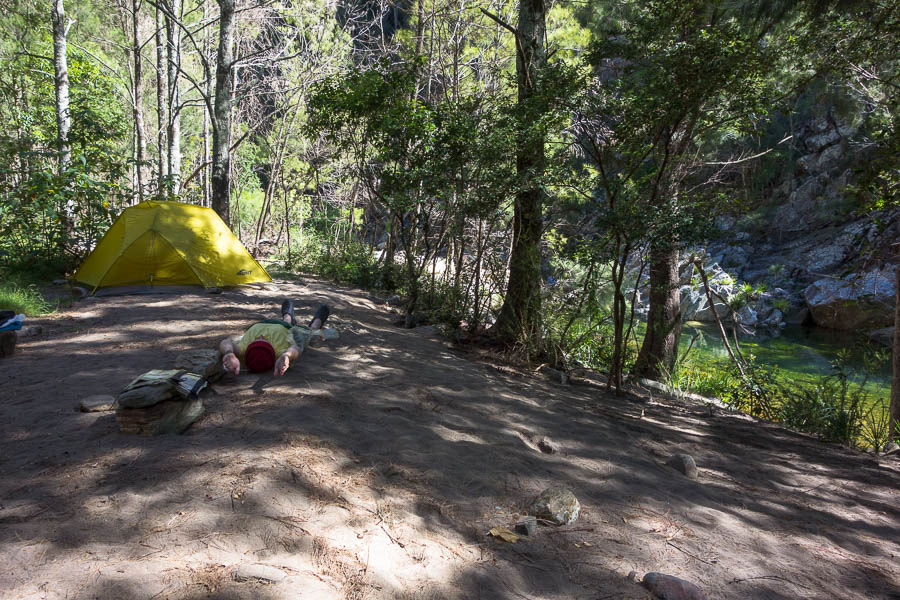 The next day we set out by 8am. Almost immediately it looked like we were going to need to wade – Tom couldn’t be bothered with the scrambling I managed to keep my feet dry. I thought back to my first time walking Ettrema Gorge – also during the Millenium Drought – where we struggled to find pools of water (downstream of Jones Creek) let along be stymied by it across the entire gorge! 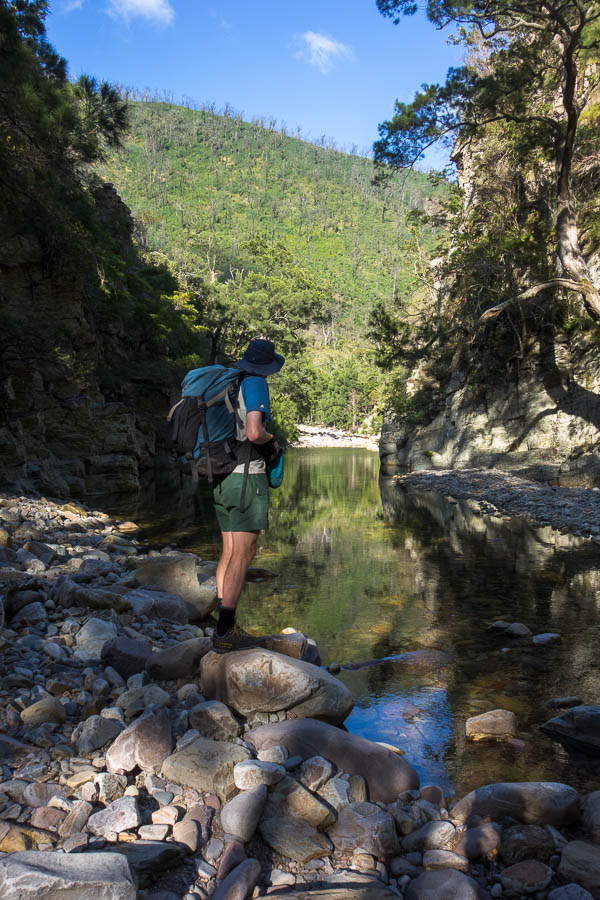 About an hour later we found ourselves at Myall Creek and with our only human encounter of the trip (excluding flat battery guy). A couple were camped on the rocks at the junction – they had got in late the night before having had a hard time of coming down Jingles Pass. Tom had a look around for the “usual” campsite at the junction – concluding the lower one had been destroyed in the floods, and the upper ones while still there were likely to be taken over by regrowth if they didn’t get a decent amount of use in the near future.

We headed up Myall Creek. When we had ascended in 2019 I had largely forgotten all the scrambling, despite it being my third time through. This time my memory was fresh and I knew was what was coming. It’s fairly relentless in it’s climbing and I felt like I was doing sets of stairs after morning tea! 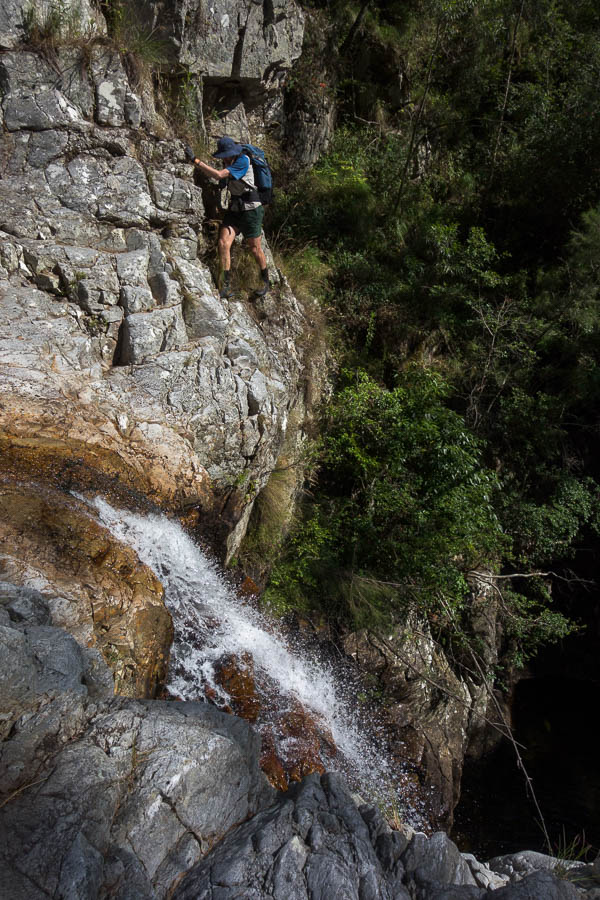 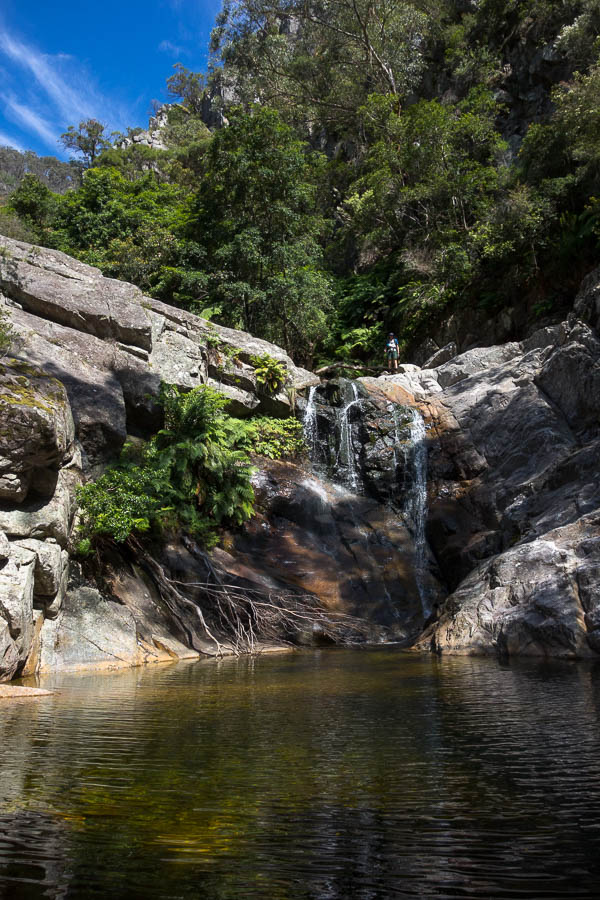 Another lovely waterfall on Myall Creek 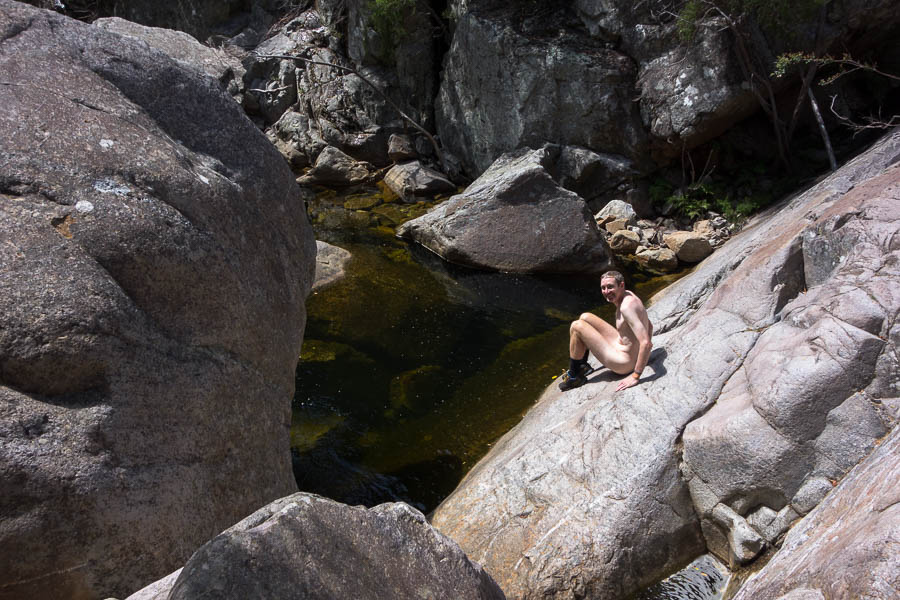 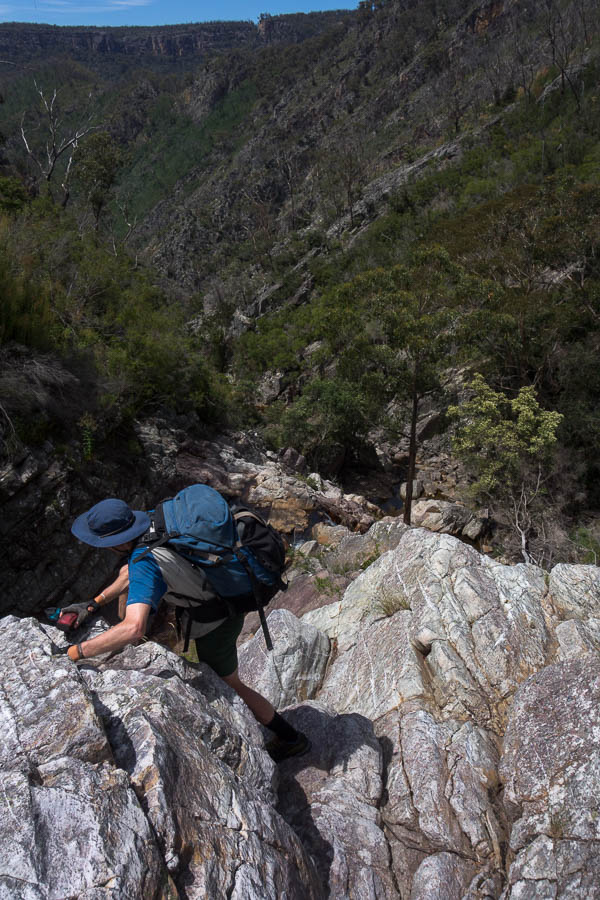 At the top of last main waterfall in Myall Creek

It took us around 2 hours to get up the creek. Being so early in the day we decided to exit via Churinga Head for lunch.

From there it was a relatively straight-forward bush bash back to the road – though I’m not sure how long the bush will be relatively pleasant to negotiate! For some reason so many trips seems to end with firetrail bashes – this was no exception – despite less than an hour of the road we were over it by the time we reached the car! 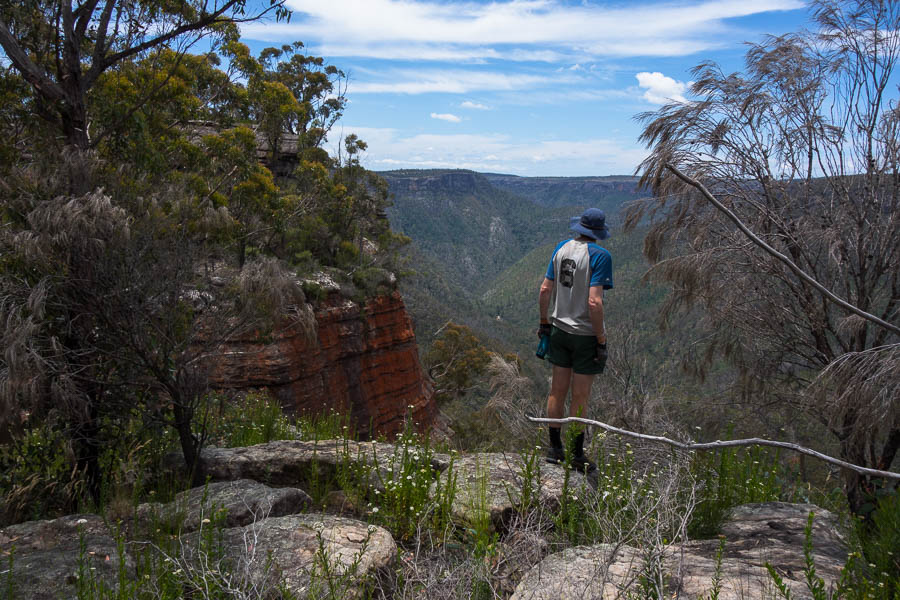 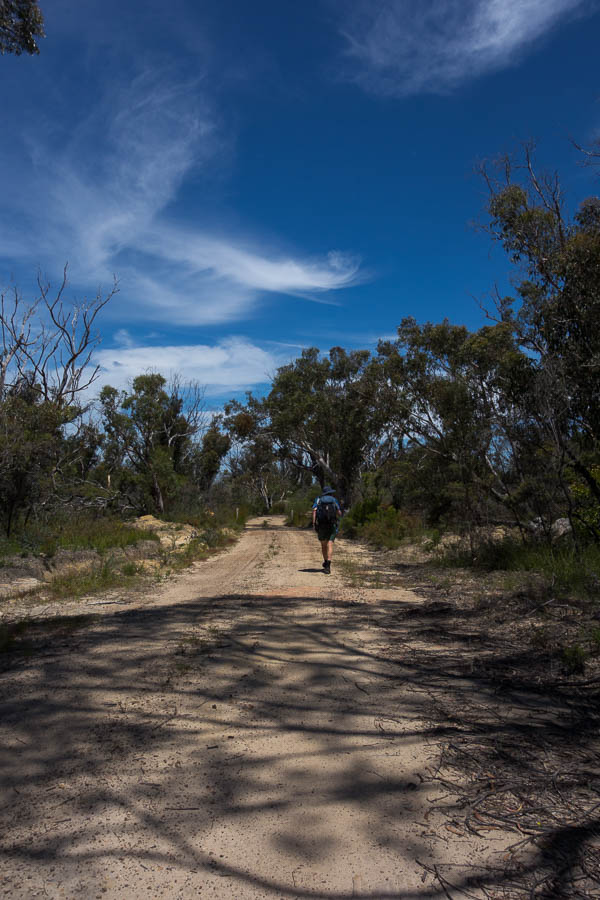 Hot walking back to the car

Taking the Coast Road home we were pleasantly surprised to find the Albion Rail Bypass has been completed – making it a much clearer run back to Sydney. A great few days in a wonderful part of the world.