As usual there was a mad scramble to pull together some walks for the program as I was putting out the draft. I’d been looking at walks out of Yalwal for a while and now that it was back open (council must have decided the dam wasn’t that dangerous after all?) it seemed time to go. The regrowth from the fires was somewhat of a concern – but I figured it couldn’t (yet) be worse than Morton pre-fires!!

Initially I was just going to follow the route from Ron Doughton’s book. But after reading the instructions for day 2, that involved following the 200m contour on an old track, I decided perhaps a revised route might be in order.

No one in the party had been to Yalwal before so it was an exploratory experience for all. The council signs threatened locked gates at 5pm each day, so I thought it best to park outside the gate just in case we were a bit late getting out on Sunday. The spillway from Danjera Dam was spilling and the party had a variety of approaches. Some waded through with no thought to immediate wet feet, others went barefoot, and a couple took a considerable detour to try and stay dry. 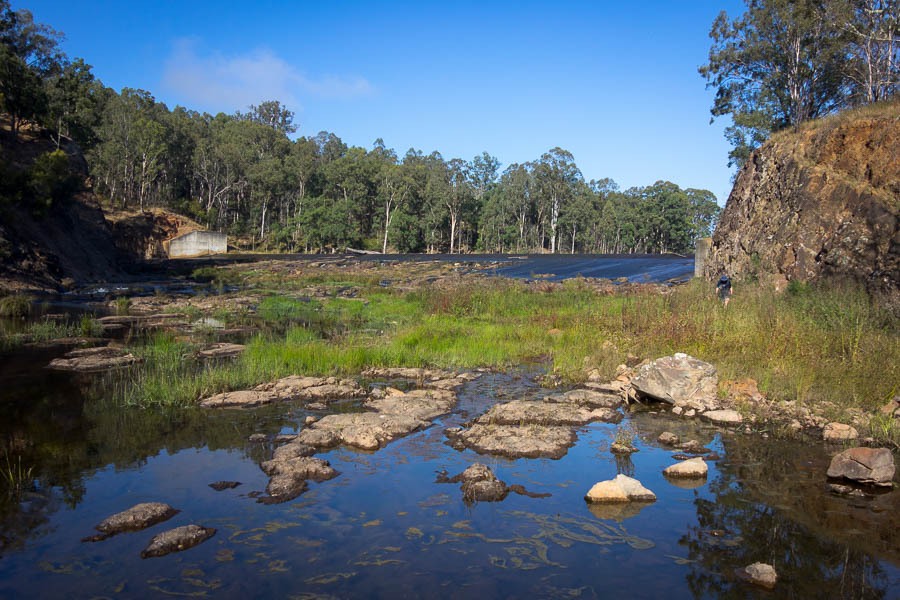 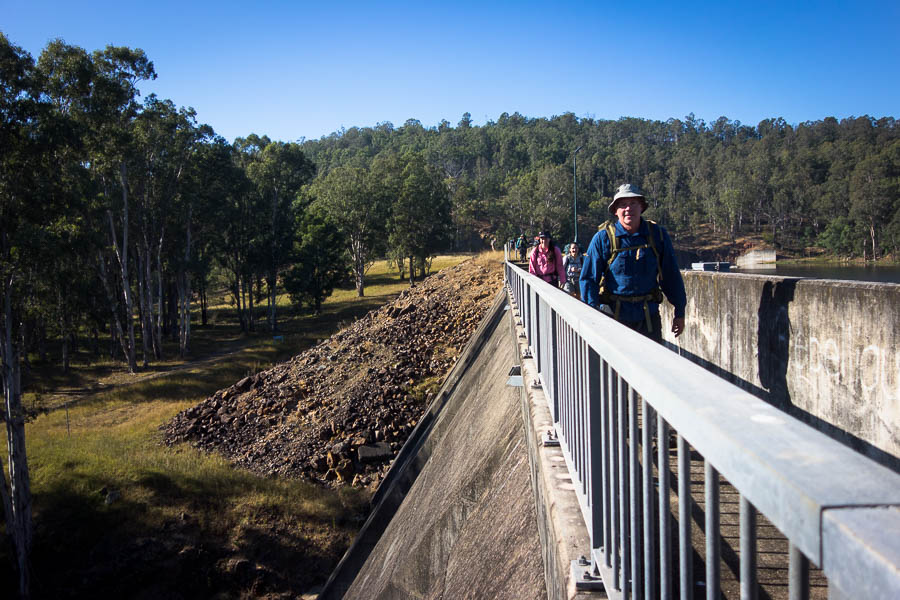 After crossing the dam we were straight into the ascent. It wasn’t long before we encountered some regrowth that slowed the pace. Eventually we got through that and attained the spur onto the plateau where we had morning tea. Peter and Alex launched into a discussion of tidal moon locks from two weeks earlier as if it had never ended. 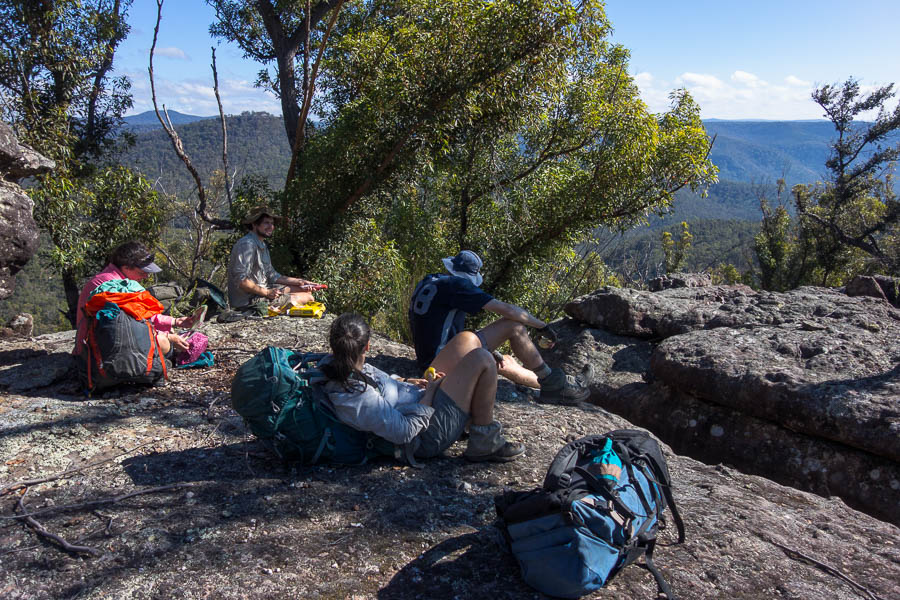 Morning Tea. I believe the discussion is the tidal lock of the moon (don’t ask)

From there we hugged the eastern edge of the plateau and got our “Fine occasional views”. I decided the rocky nose we could see in the distance would be our lunch spot – it looked a fair way but based on the map it couldn’t actually be that far. And so lunch was had at a very reasonable time of 12:30pm. The progress had not been quick to that point so my aspirational goal of Fletchers Crown was discarded. 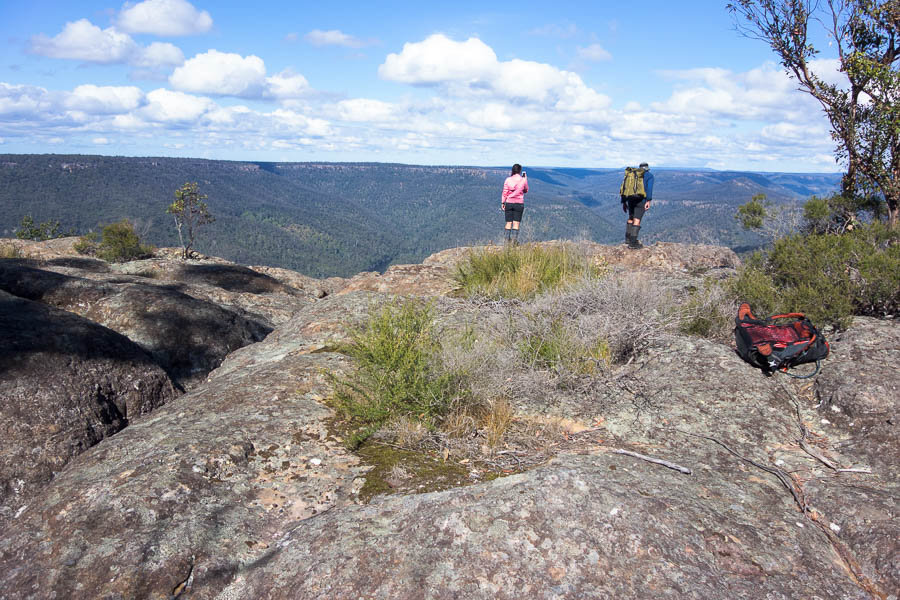 Lauren & Peter checking out the views 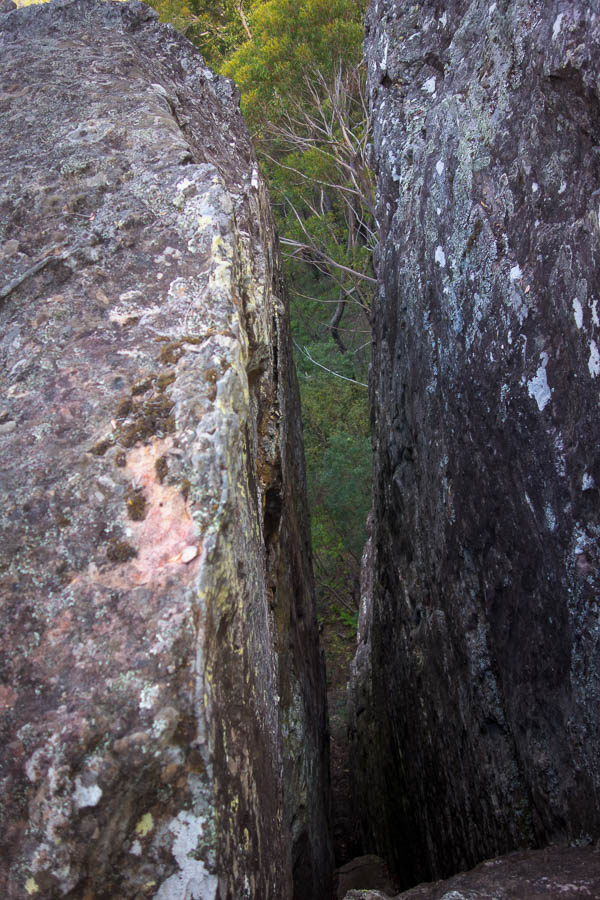 Needed to be careful wandering around the cliff edges! 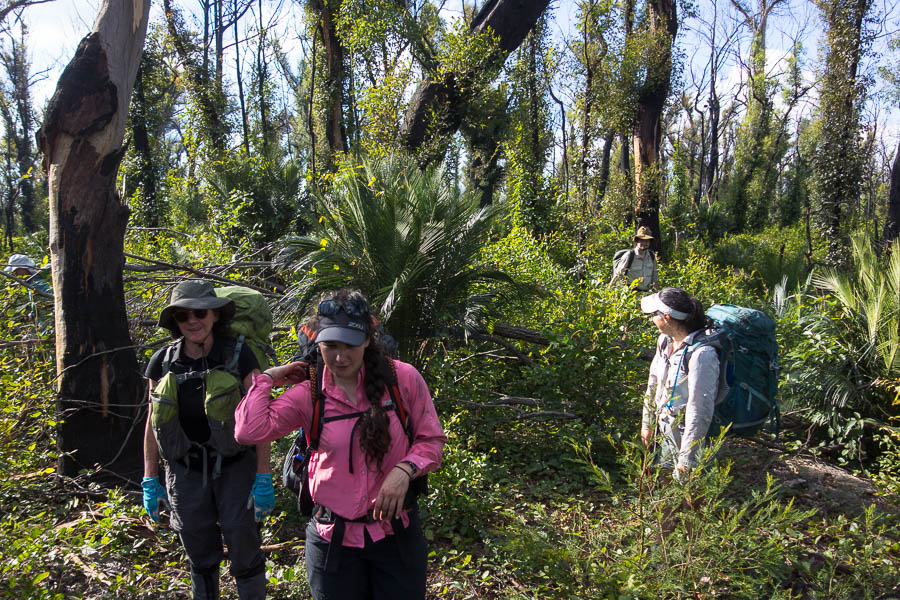 Emerging from a particularly unpleasant section of vines 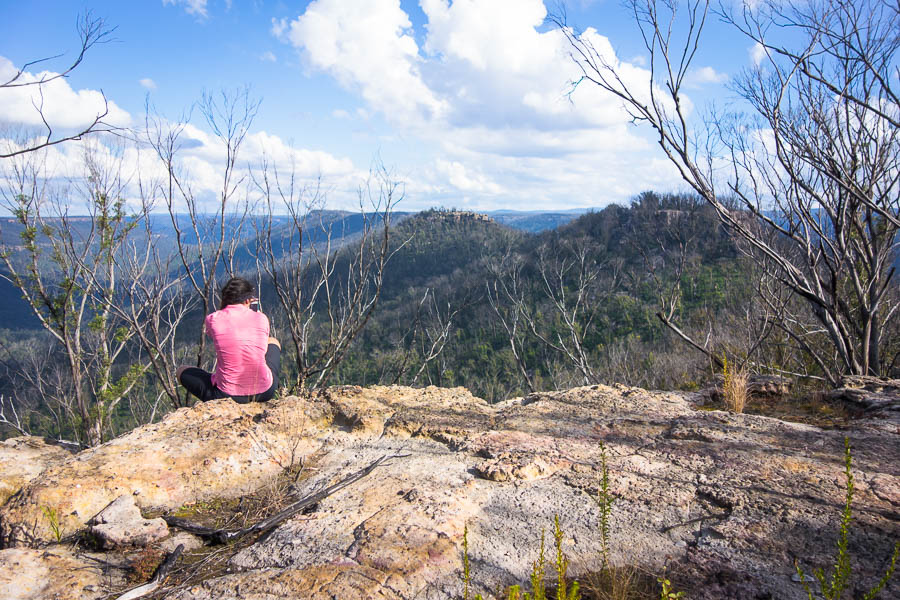 Views out to Fletchers Crown – another time!

We had seen a couple of seemingly random cairns, including one on the eastern side – Tom checked out whether it was marking a pass but nothing was apparent. So instead we descended a small gully on the western side, and then found ourselves negotiating another vine-laden section before getting to Morley Saddle. While short, its narrow, rocky traverse was one of the highlights of the day. 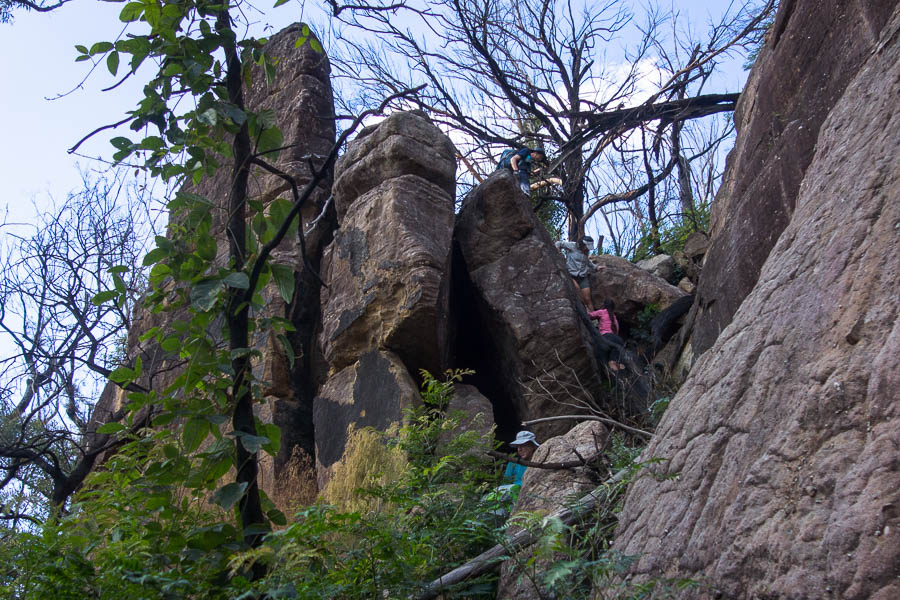 Descending off the plateau 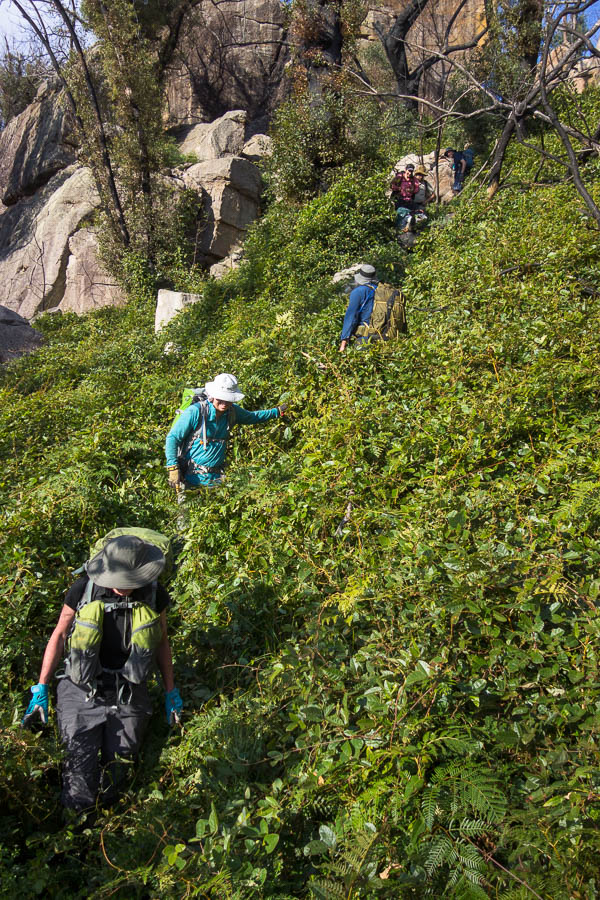 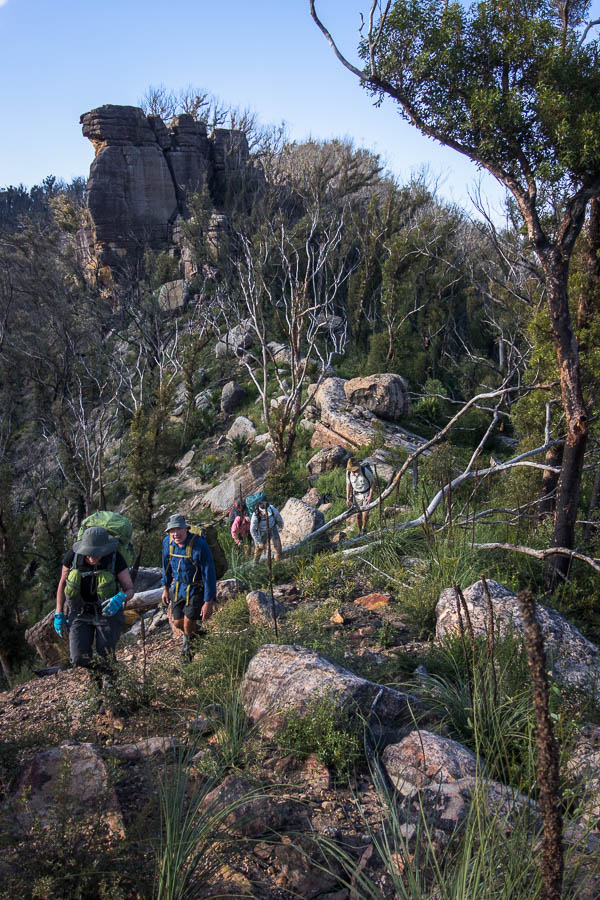 I said we weren’t going to do any “^&*# sidling” but with plenty more vines underfoot I decided sidling was the less painful option. We soon found ourselves on Atkins Spur and began our descent. Initially it was good going, then I veered off onto a minor spur. Tom called us back and took the lead. Soon we were engulfed in the worst tangle of scrub of the weekend. Over head high growing in all directions, plus going downhill. Tom was in the lead for about 10 minutes before he relinquished the vanguard back to me. Needless to say we were all pretty happy when we reached Bundundah Creek. Except that there wasn’t a good looking campsite option. I went off upstream and found something a bit better for 8 people. My communication had clearly been deficient and the others had been busy collecting firewood and selecting campsites while I was gone. Nonetheless I hope everyone agreed that despite having to walk upstream for a couple of hundred metres we ended up with a superior option. 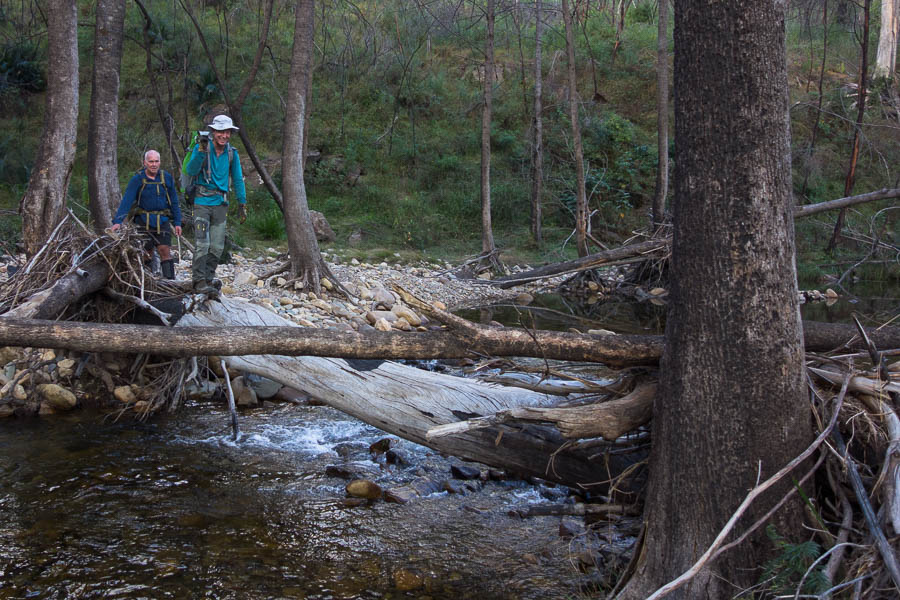 Creek crossing to get to camp 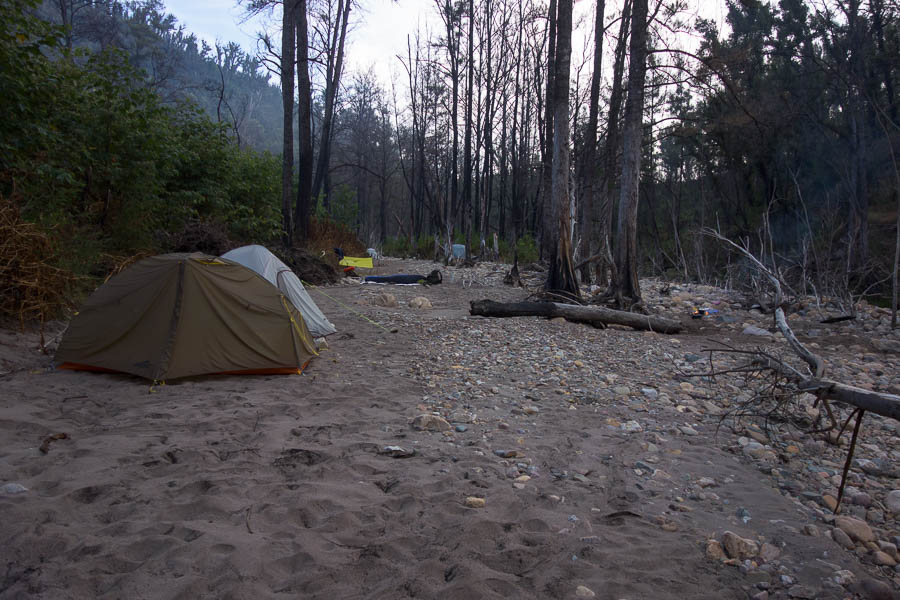 It had been a warm day, and we’d all sweated profusely – some had run out of water. A wash in the creek was most welcome – if pretty chilly. We had a cheese filled happy hour, including fried haloumi. The evening was mild despite the clear sky. I was relieved when the time became something with a 9 in front of it so I could head off to bed – though the others seemed to be up for a while longer.

I perhaps was too generous in my starting time for day 2, given the pace on day 1. However, the time had been set, and so at 8:30am we headed downstream on Bundundah Creek. 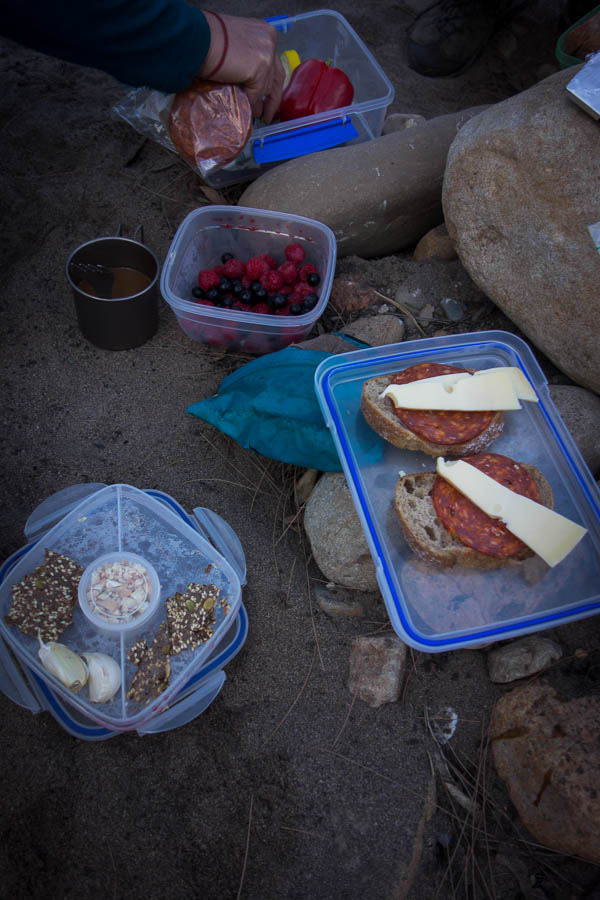 Some are more gourmet than others 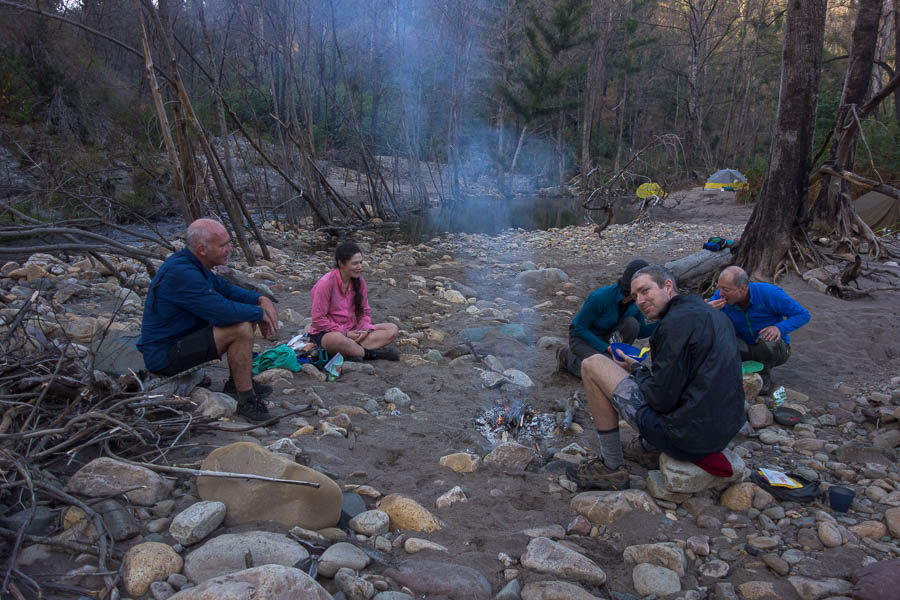 We had a number of creek crossings – they became easier as more people decided to get their feet wet. Though Tom (& maybe Alex) were prepared to work harder than everyone else and kept their feet dry the whole way. 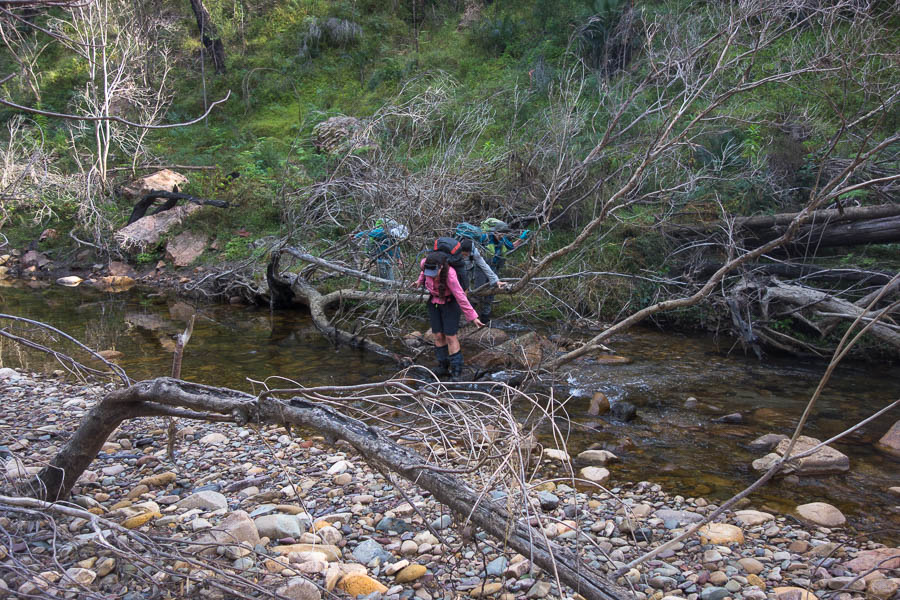 One of many creek crossings on Sunday morning.

Pink granite started appearing in the creek. Initially we thought maybe it was just a brief intrusion, but it continued until the point where we exited. It was a highlight of the trip. 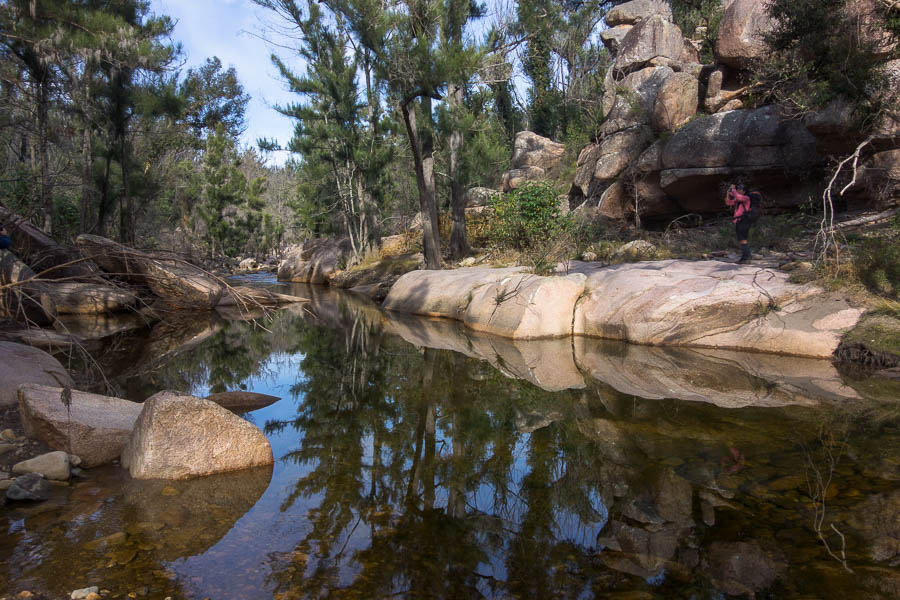 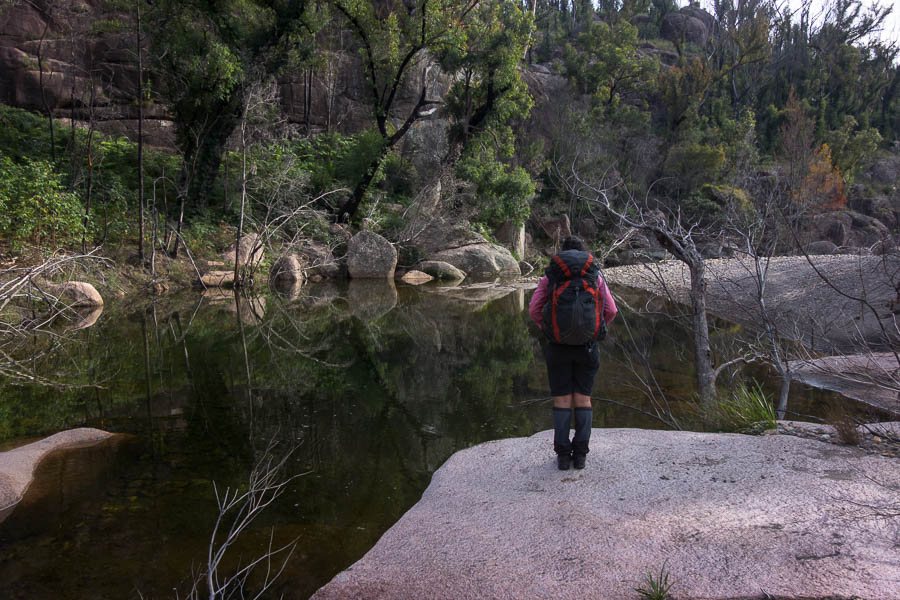 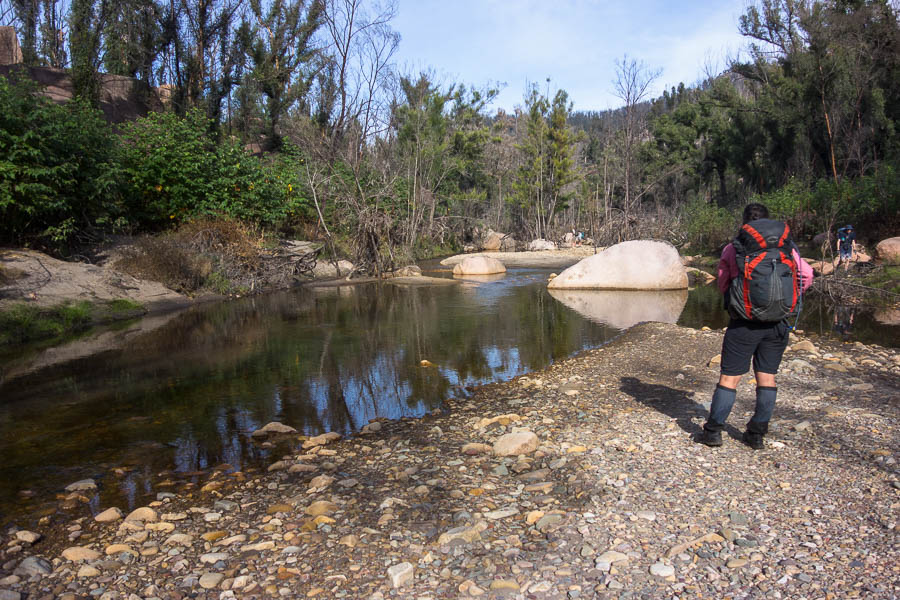 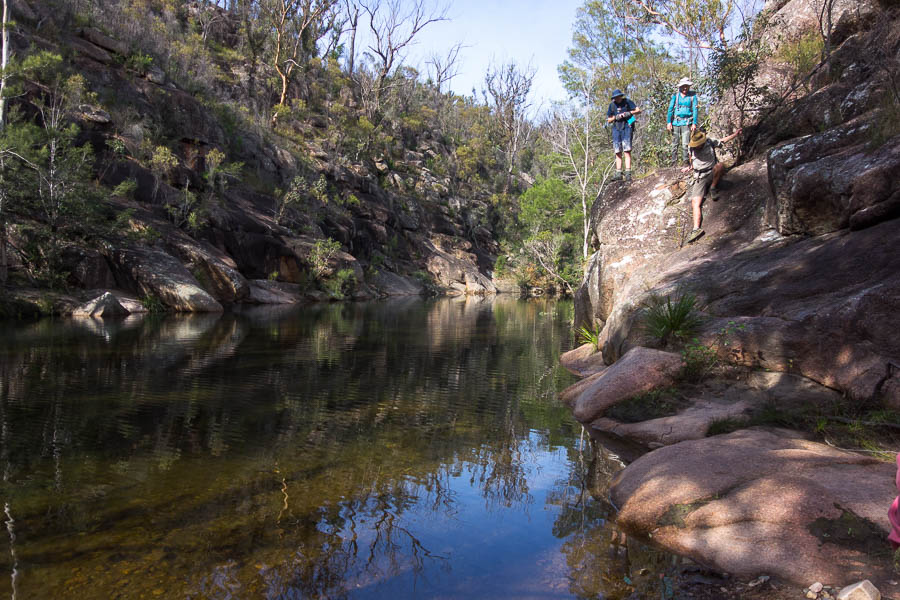 Alex negotiating a bluff (the ripples in the water because Jo knocked a handhold off!) 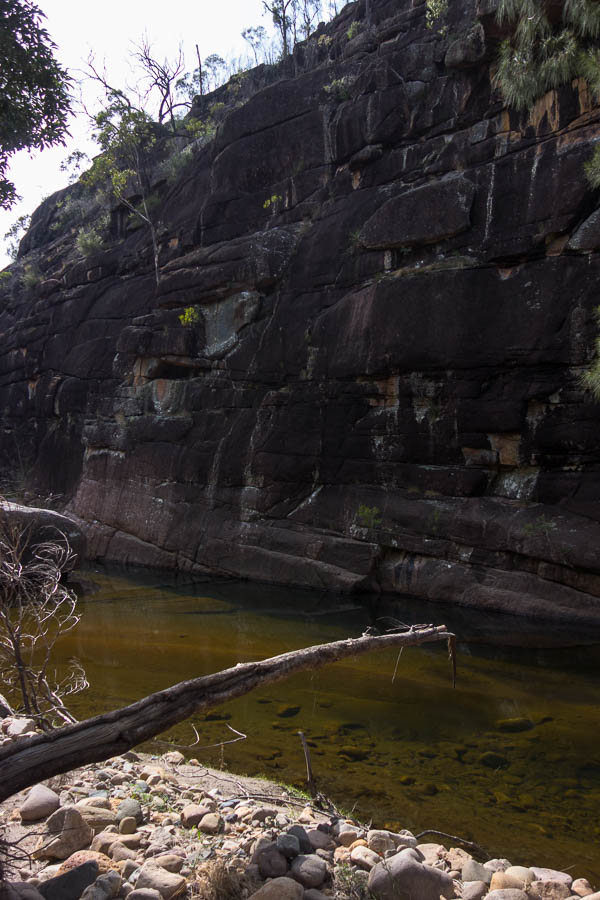 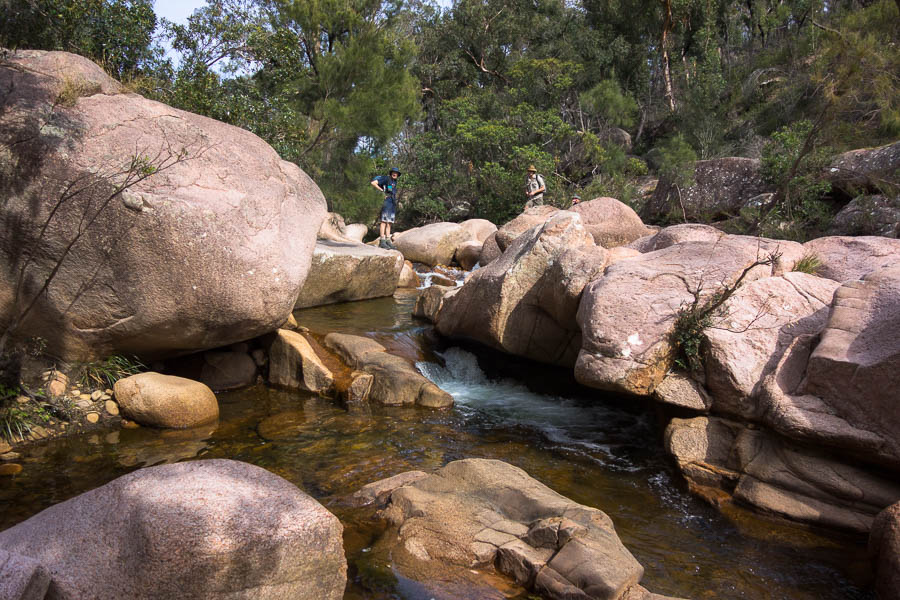 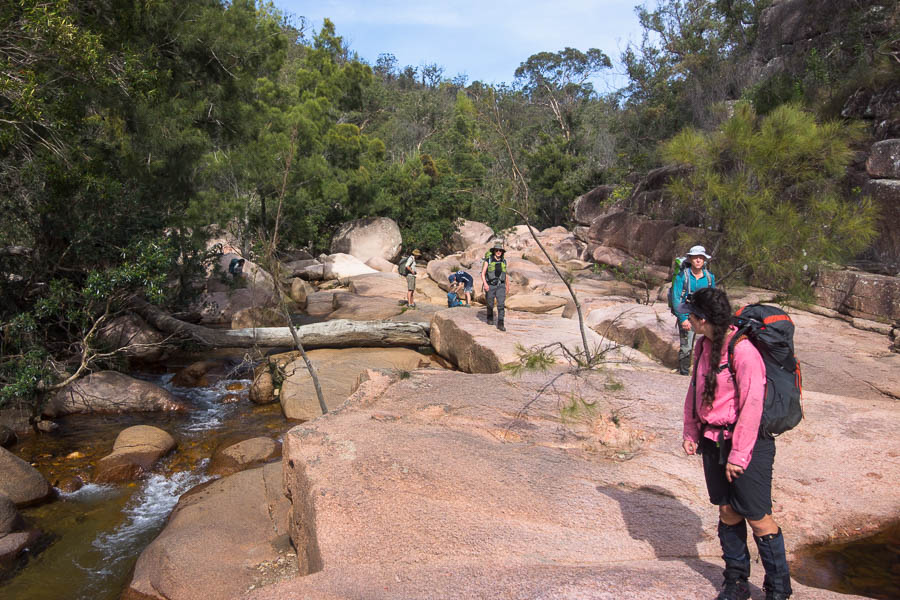 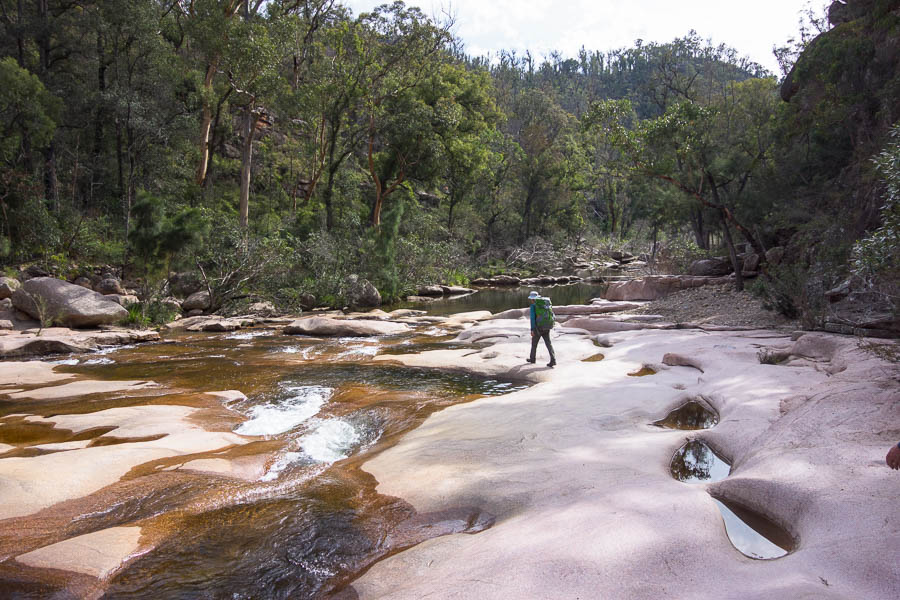 Reaching a particularly lovely section of shallow cascades I gave the party the option of an early lunch, then the climb, or to just get on with the climb. No one seemed to have an opinion so we went with mine – to get the climb done. After filling up with water (probably more generously after yesterday’s consumption), and a couple of head dunkings we were off. 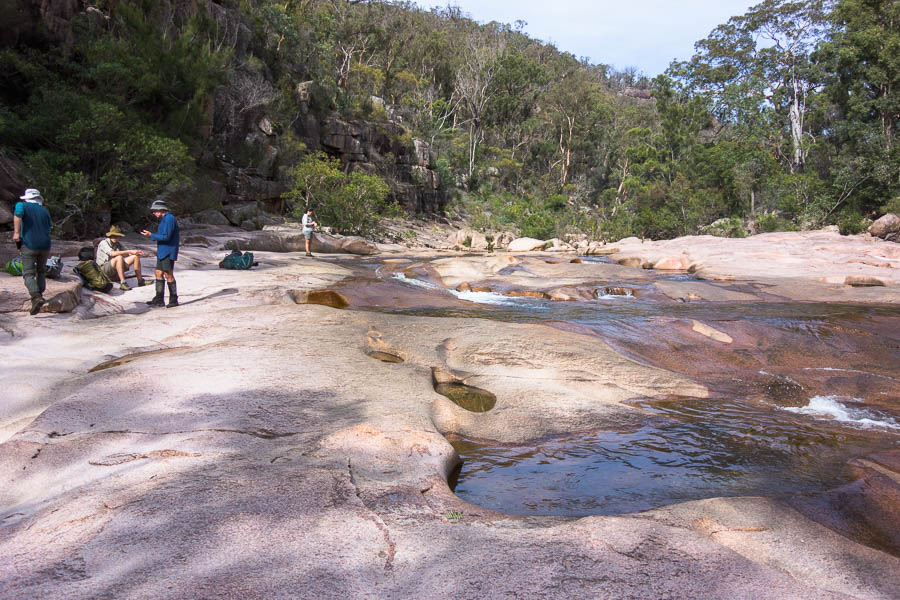 Time to fill up water

We were happy that the ridge was relatively open and the difficulties were confined to it being warm and a 400m climb. 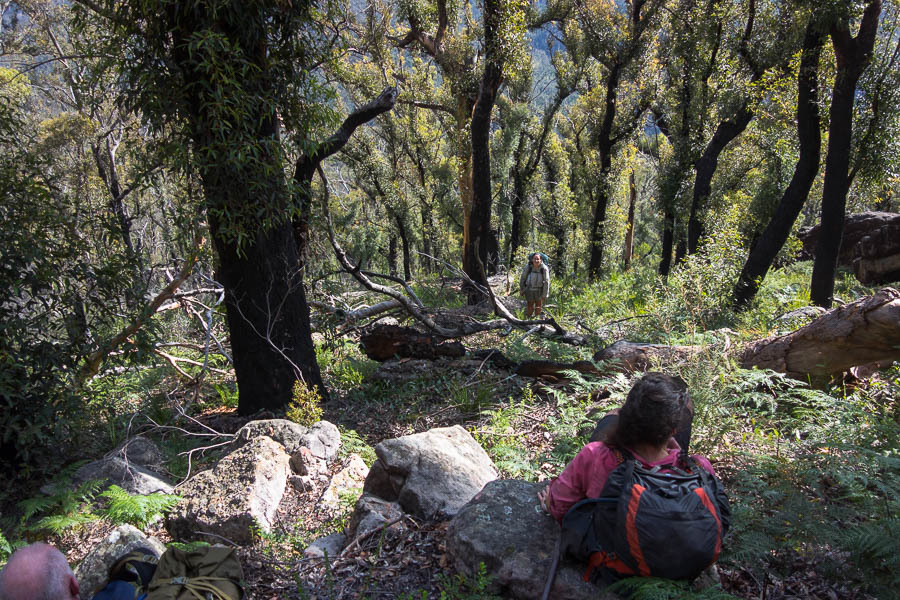 Jo & Lauren at the base of the cliffs

Lunch was in a somewhat shady spot just below the top of the cliffs with some nice views out over the valley. In retrospect if we’d kept going onto the tops we’d have found shade, similar views and a bit more space – but we’ll know for next time. There were dire calculations at lunch that we’d be pushing it to be back at the cars before dark. Quietly I was confident we had plenty of time – but you never want to say that out loud. 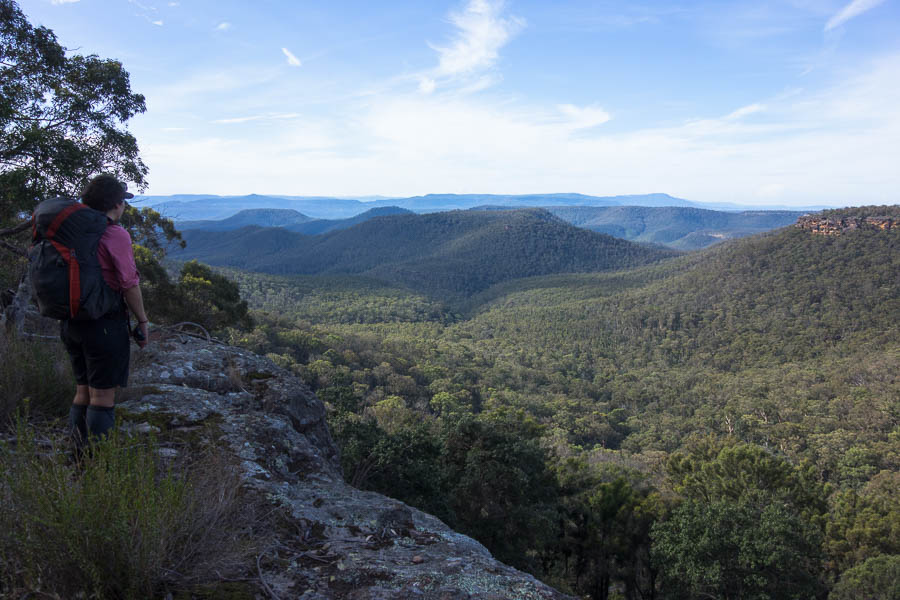 I was surprised to encounter a completely unburnt section – fortunately not very long. From there we picked up a similar route we’d walked the day before – though this time taking in some views on the western side of the plateau. Having been at the front almost all of the trip I was very happy to give that spot to Alex for the final descent back to Danjera Dam. The scrub really wasn’t that bad from the back of a pack of 8 walkers! 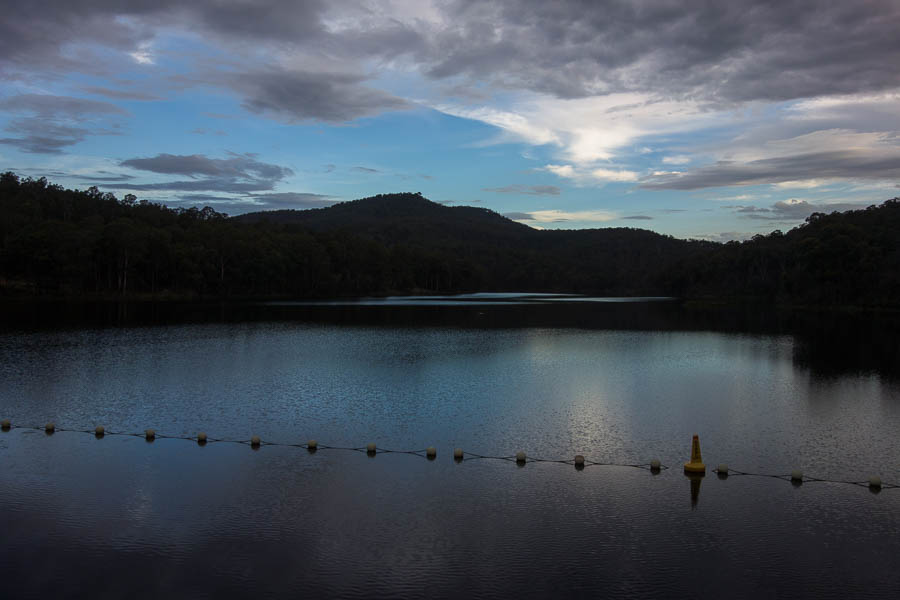 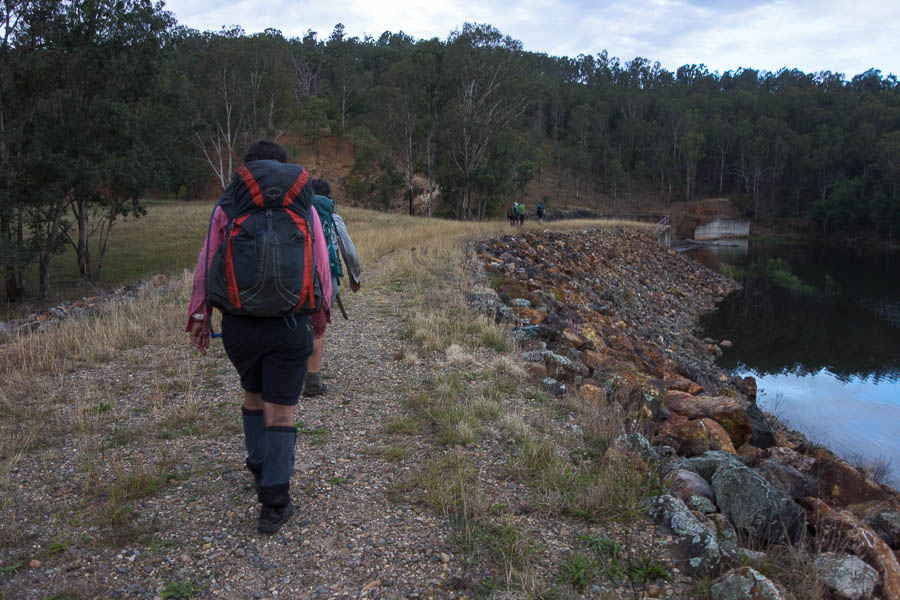 And so we re-crossed the spillway at 4:30pm – plenty (well, enough) light left in the day. 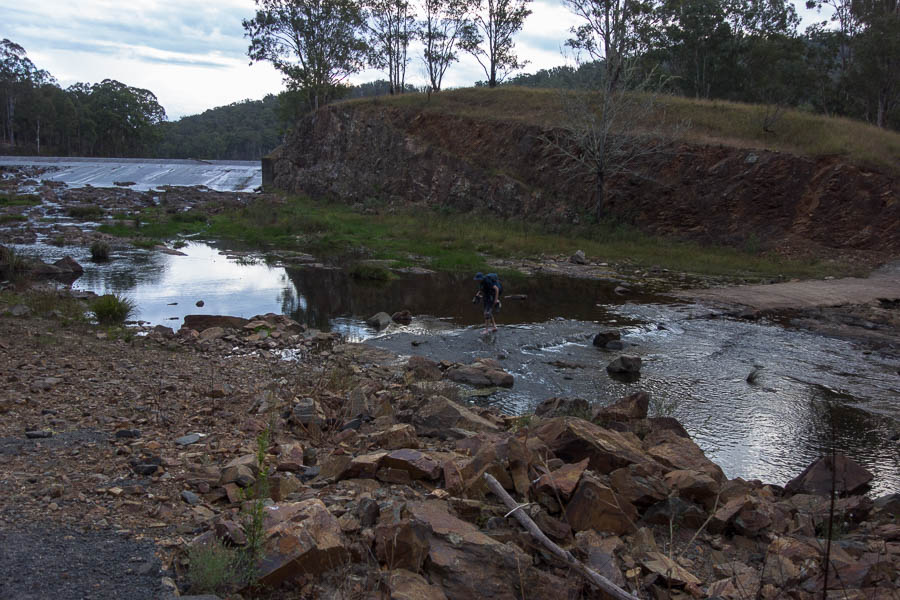 Tom taking the more direct route on the way back

Back in Nowra we had hoped to head to the Bridge Tavern for dinner – only to find it had closed down. Fortunately Lauren’s googling found us a replacement in walking distance from the car park. The Postman’s Tavern had a $12 burger special on Sunday nights – a more than worthy replacement to the $10 dinners we had been hoping for at the Bridge. Alex inhaled his 3 pattie “Beast” in half the time it took the rest of us to eat our slightly less extravagant burgers. Everyone’s cars started after dinner so from start to finish a successful weekend. 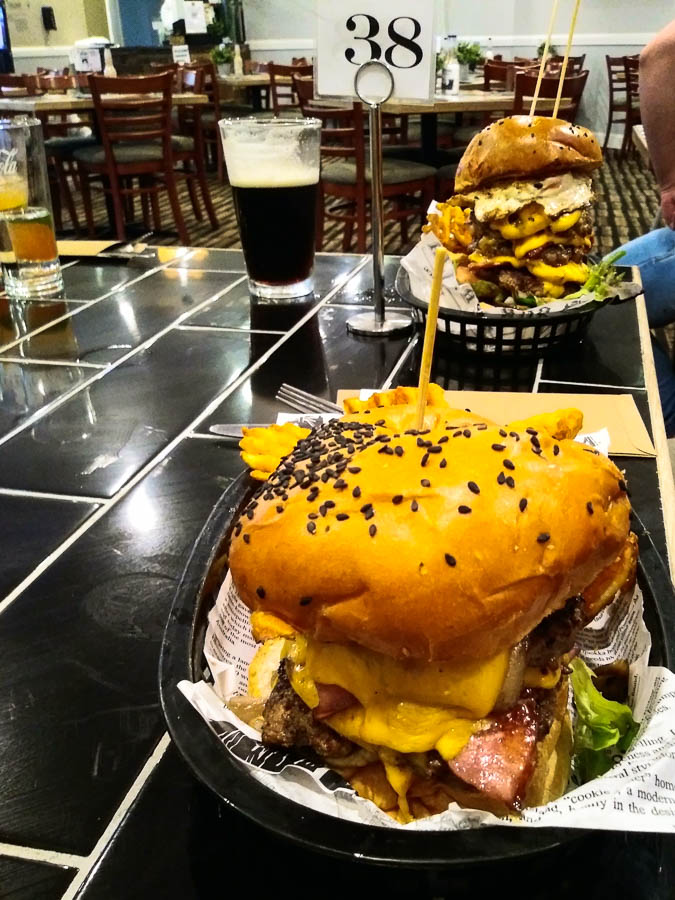 The Beast (at the back)