Stop the press! James was available for a second canyoning weekend less than 3 months after our last trip. However, true to form, the weather was not looking great for the weekend. I looked at the where the rain was going to be, and suggested heading south might be the best bet.

After a series of indecisive conversations through the week we did make enough decisions to end up on our way to Bungonia on Saturday morning. We had a relatively late start as we’d been discussing Long Gully – and we’d been at the Shoalhaven for lunch when we’d done that trip previously. However, Tom was now angling for Jerrara Creek. It was only while we were driving down that I looked at his notes and saw the 8-11 hour time estimate. Well. With our likely start time we were going to have 8 hours of daylight. Better make sure we all pack our torches, or hope that 2009 Tom who wrote the notes had been over-estimating the time needed.

After doing a lap of the campground (no, it’s not like we’re pressed for time), and the disappointment of finding the Bungonia campground did not permit wood fires (no, I didn’t pack a stove), we left the car at 9:45am. It wasn’t long before we were wet-suiting up in Jerrara Creek. We proceeded pretty smoothly through the canyon. 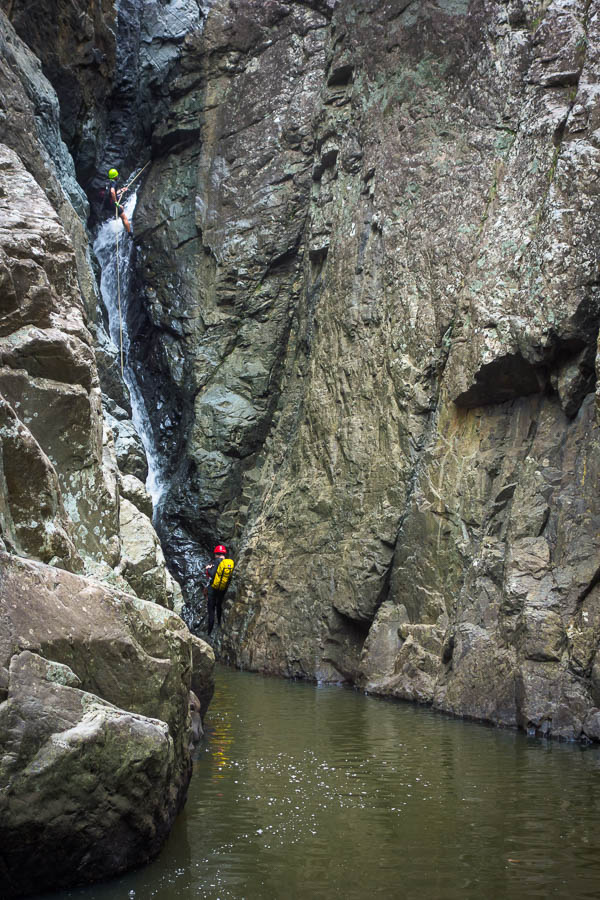 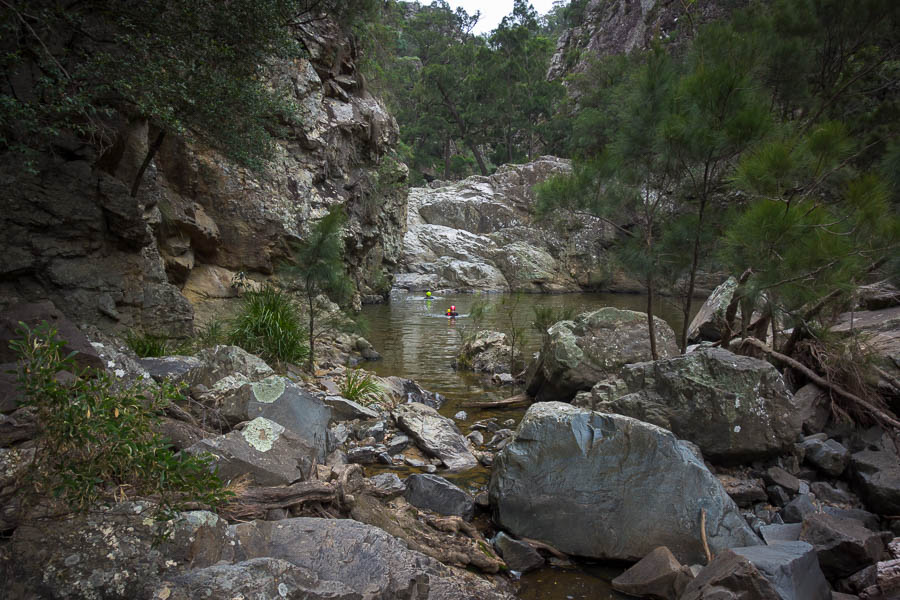 Tom & James “enjoying” a swim – not the warmest day! 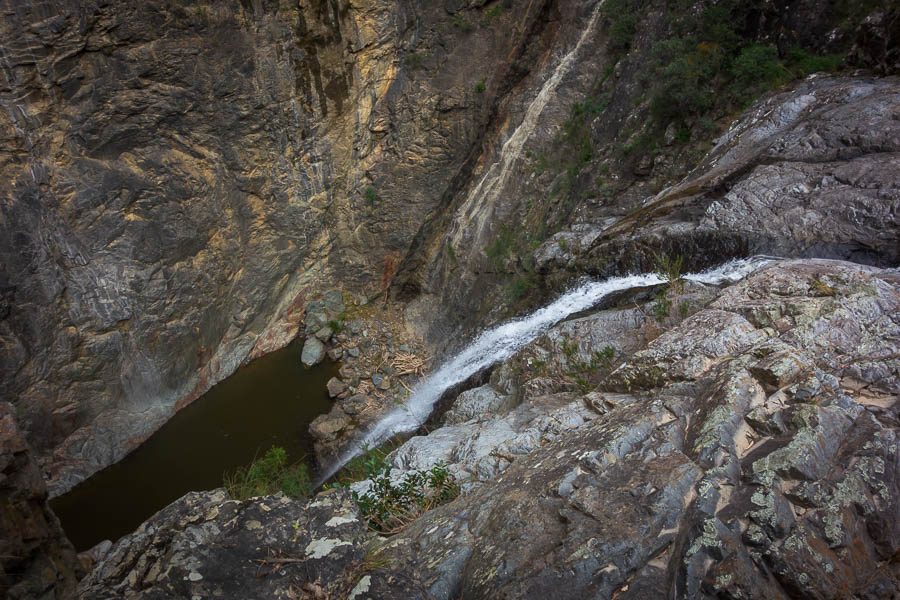 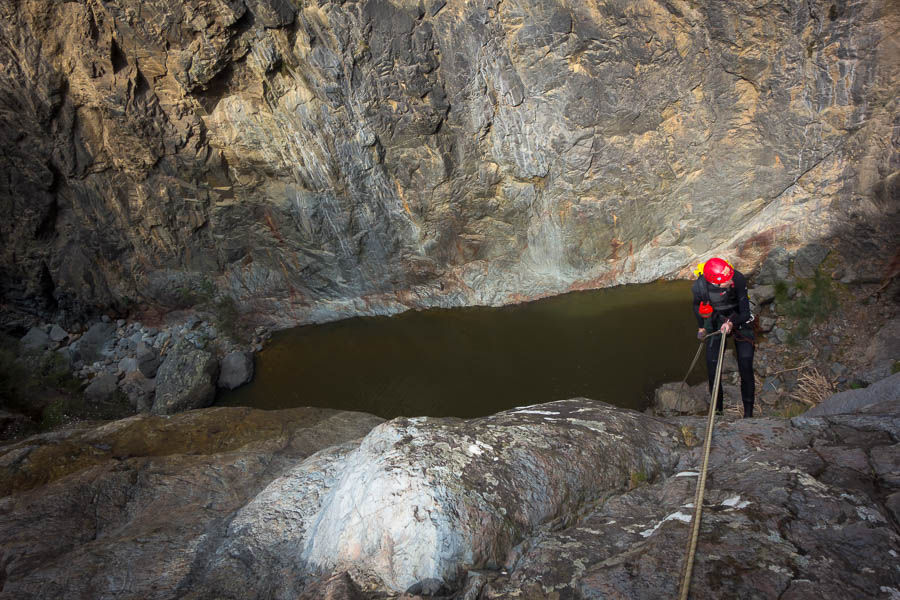 Tom on his way down 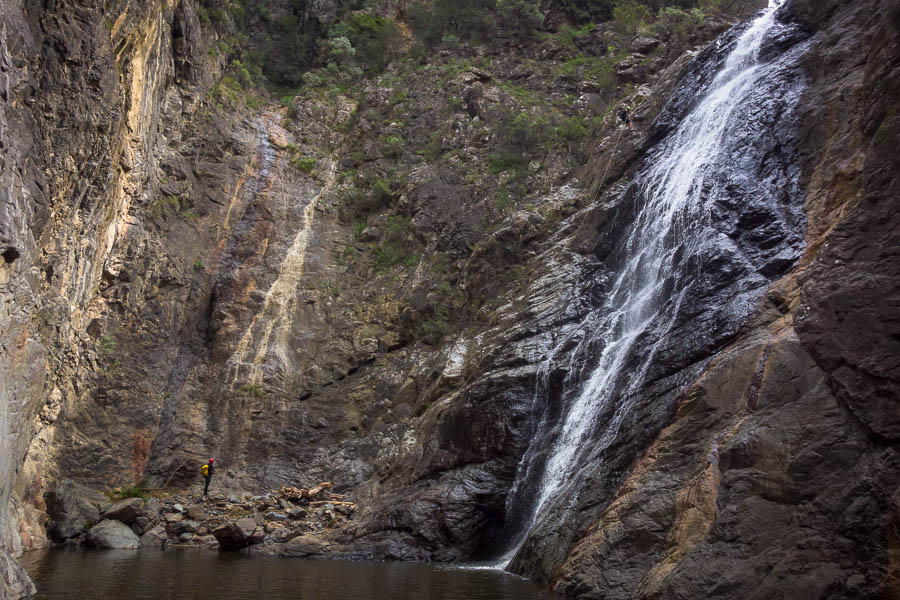 It’s been a while since I’ve done a canyon with a lot of long drops, and even with only 3 of us, I’d forgotten just how it takes to get people down. 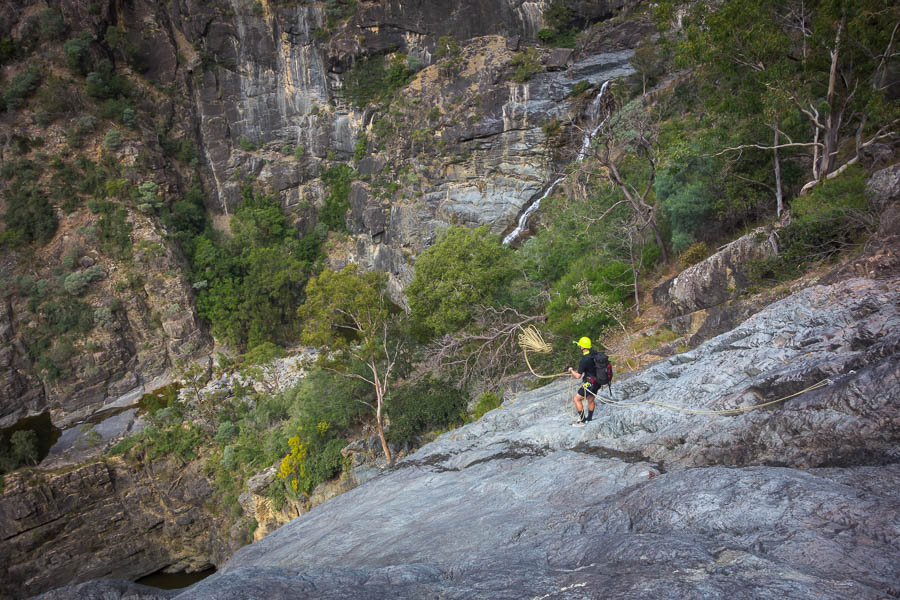 James on the first pitch of Jerrara Falls 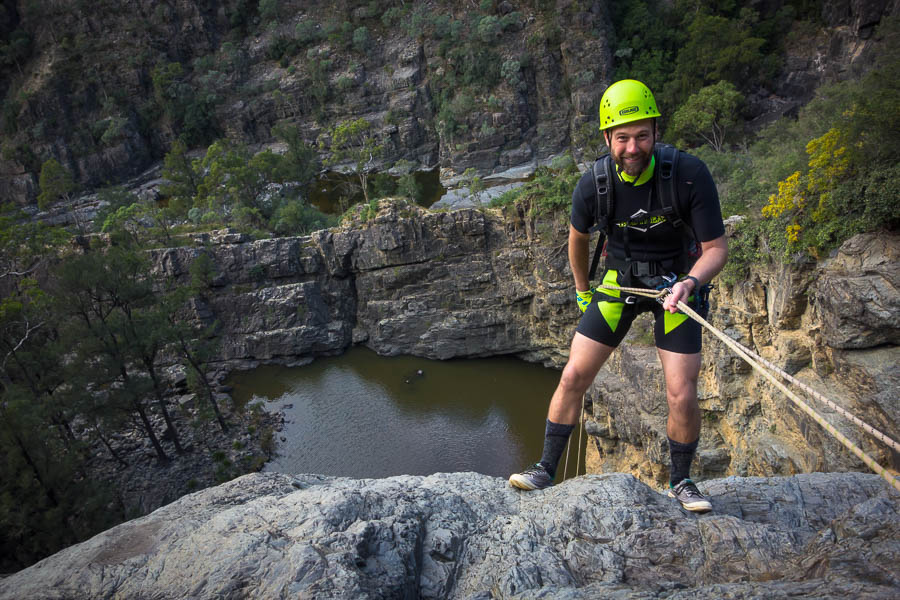 James at the start of the second pitch of Jerrara Falls 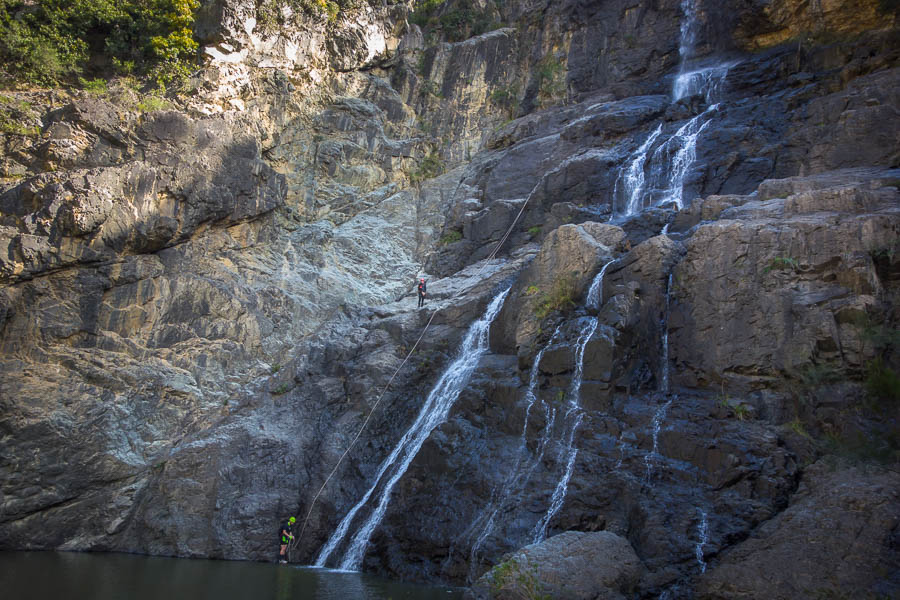 The third pitch of Jerrara Falls 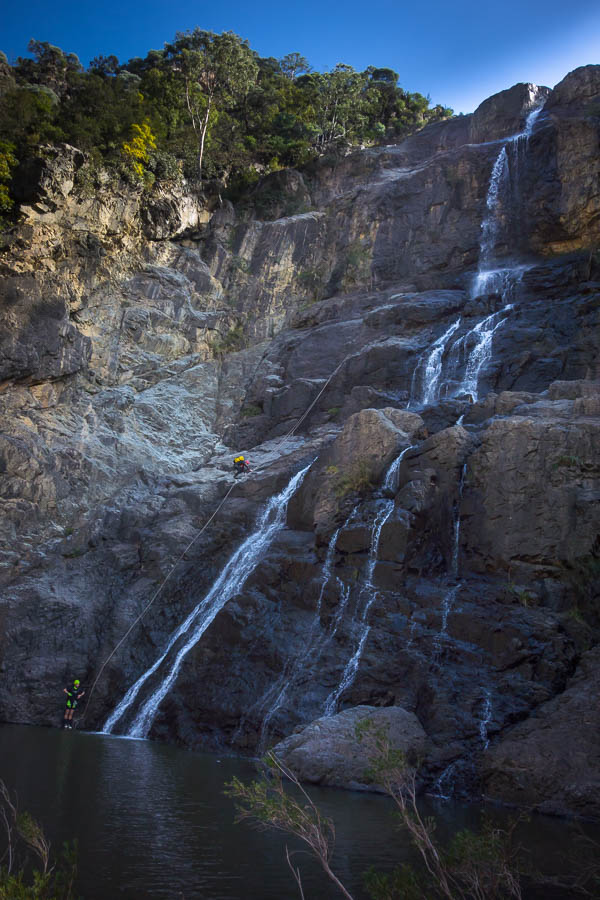 We enjoyed the brief periods of sun we got and were pleased to find the clouds had largely cleared in time for lunch. 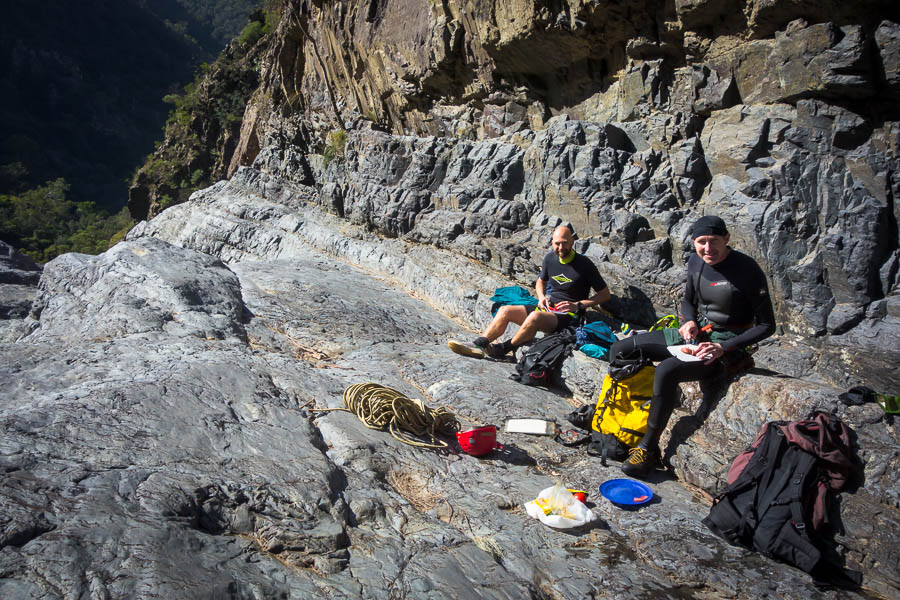 Lovely lunch spot and time to warm up

We left our lunch spot at 2pm that gave us 3.5 hours till sunset – seemed like we wouldn’t be needing to use the torches – but you never want to be too confident! 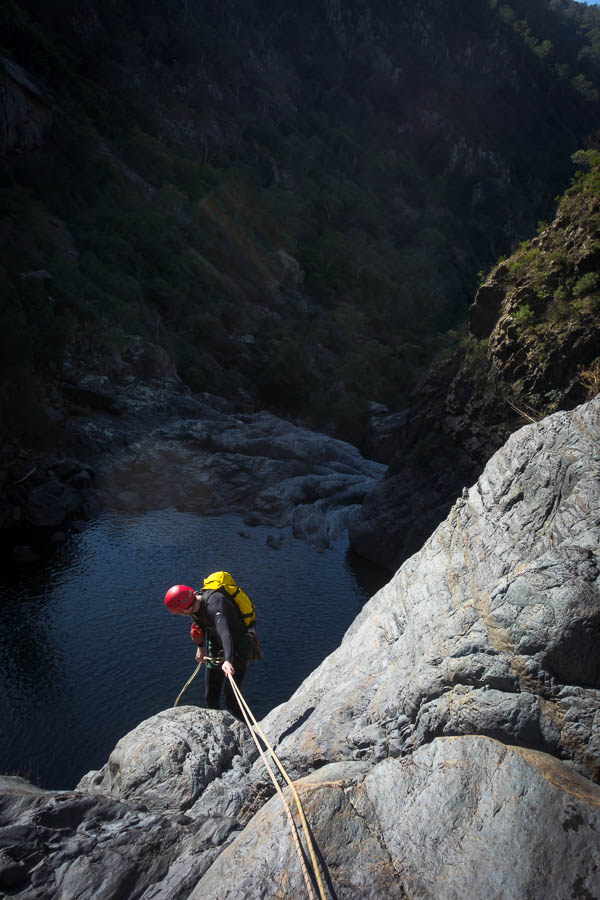 Tom descending into the shade 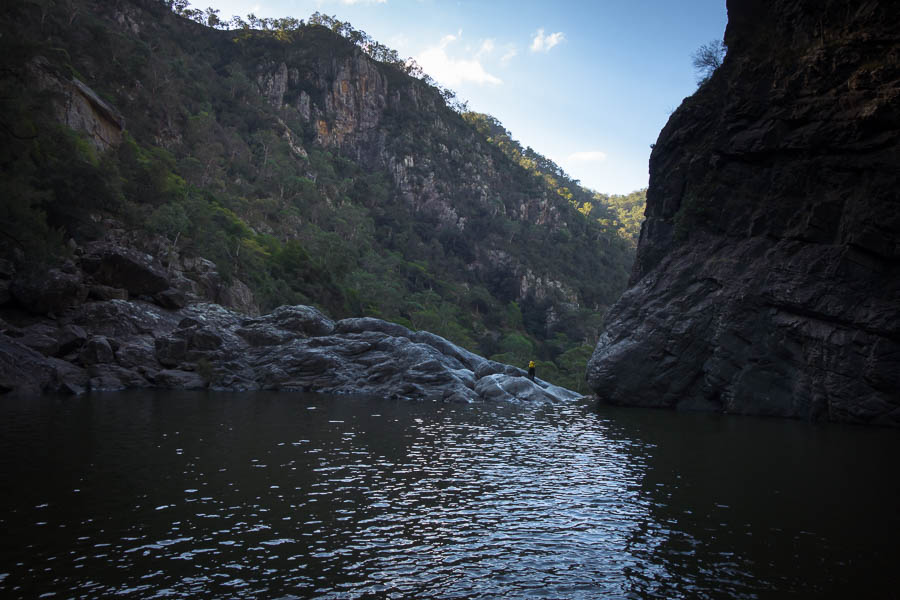 Big country (and another swim looms)

After the swim in the photo above we had a longish section of boulder-scrambling which we moved through pretty efficiently. I was sweltering in my wetsuit and when James joined my pleas we stopped at a lovely spot to get changed. It would have been a nice spot to camp but I was not unhappy to only have our day gear with us – lugging a wet 60m rope makes a pack heavy enough. 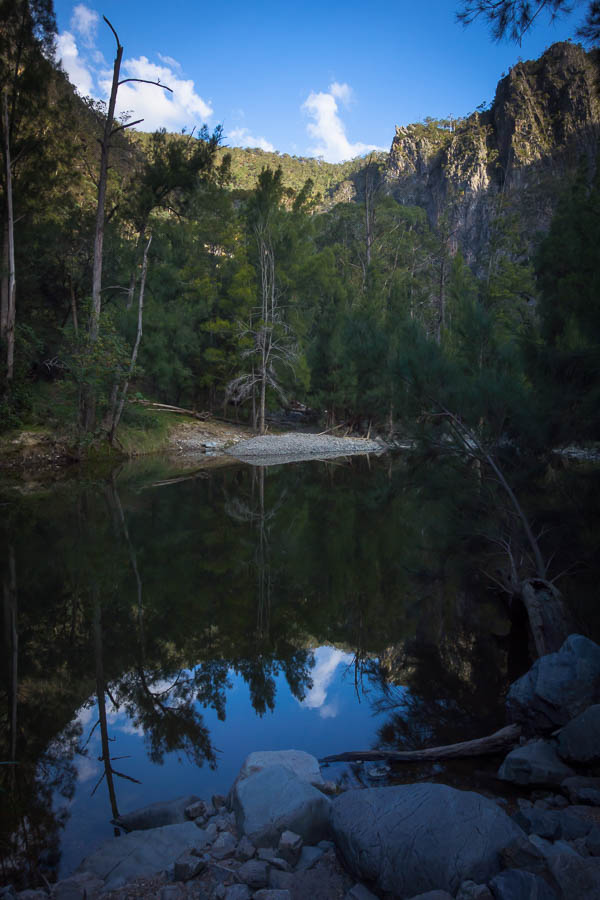 This was such a tranquil spot

From there it wasn’t long till we hit the exit. Though I think James was a little dubious about this being an NPWS track given the state of it, particularly at the bottom. My legs haven’t felt so sluggish on a hill in a long time but we made it to the top without really stopping so I can’t be that unfit! 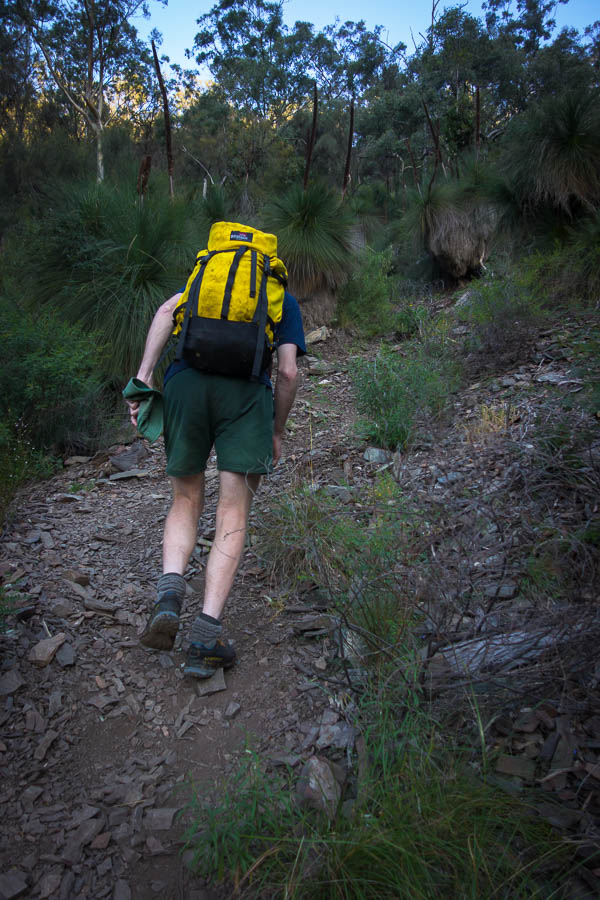 Slogging our way up the Red Track

I think we were back at the car around 5:15pm, so all up 7.5 hours. Perfectly timed really in the end – what with the sun at lunch, and doing the climb out in the shade with the lovely evening light.

Fortunately James had a stove so our night wasn’t a complete disaster, particularly after a bottle of red and some fortified shiraz 🙂