It’s the SBW reunion weekend so of course the forecast is for rain. It’s also an La Niña year. So it’s a lot of rain forecast. Hmmph. The forecast was not looking good for our canyoning plans on Saturday with around 50mm of rain predicted for Thursday & Friday. Tom checks on Friday morning and Robertson has recorded 0mm. Excellent. I wasn’t feeling quite so good when later in the day he checks the surrounding weather stations (Fitzroy Falls & Broger Creek) and they’ve had 50mm. Fingers-crossed that there were some very localised storm cells… and not that the Robertson weather station isn’t working!

I had been contemplating not going – with a multitude of injuries (left wrist, right thumb, calf… ) but when Tom said it was a fairly short day, I decided I’d be able to make it through.

After a couple of delays (failing to download the information on Tom’s phone before dropping out of mobile range, for one) we set off with Jon & Alex. Alex & Tom had attempted this trip some years earlier, on another wet reunion weekend, and bailed because of water levels being too high. Tom has no photos from that trip as he’d drowned his camera the day before – so his memory of what the water was like on that trip was sketchy. The water level looks approachable so we wetsuit up (well except for Alex who is wetsuit-less). 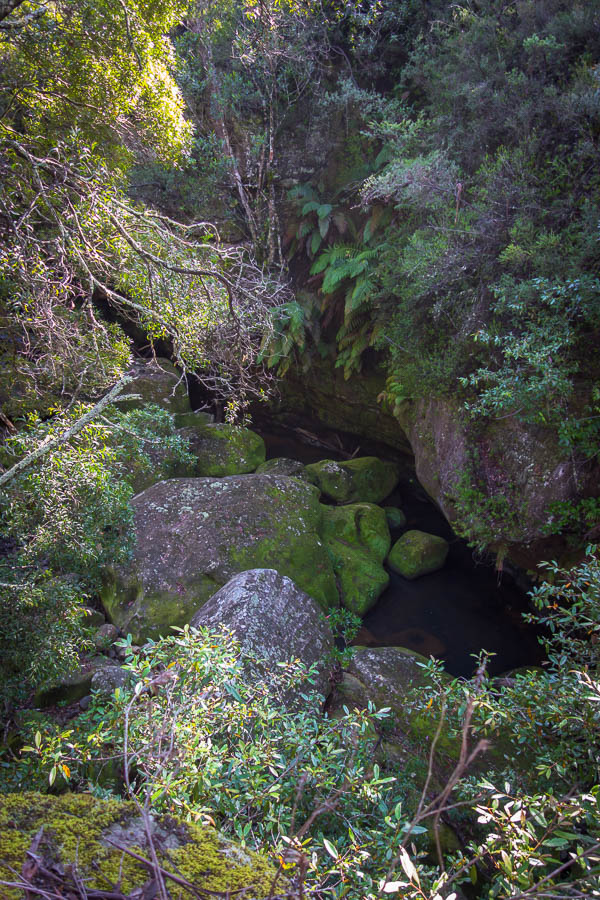 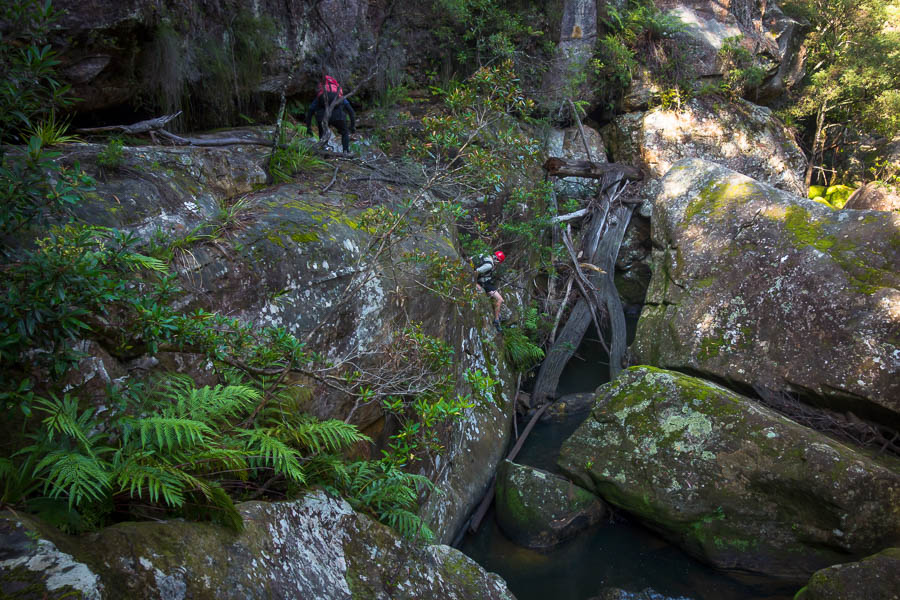 Alex on an early scramble

I was pretty glad to get into the water as it was a humid day (forecast high around 30°C) and I sweaty after just a few minutes. I can’t imagine how Jon was feeling in his steamer.

Jon & I made each other feel so much better about the day by admitting each of us been having “bad feelings” about the trip. Probably brought on by the canyon’s history – a fall/paramedic fatality a few years ago and then last weekend a tree/rockfall narrowly missing a party. 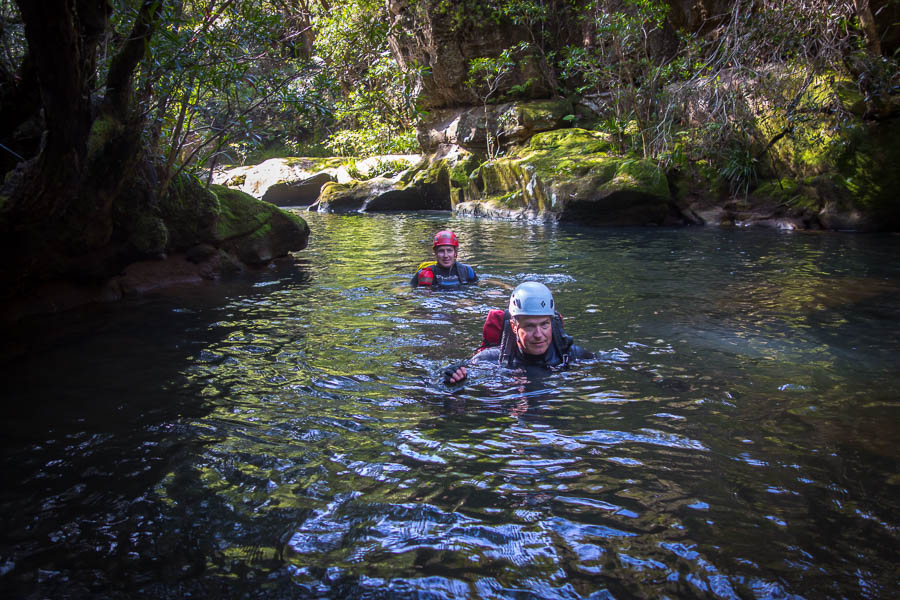 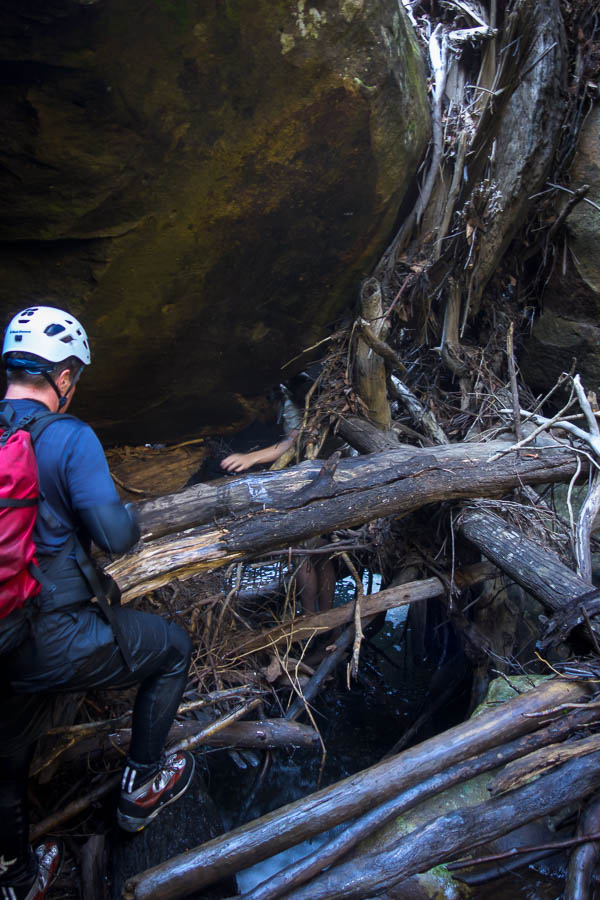 Alex disappearing through a hole in the log jam 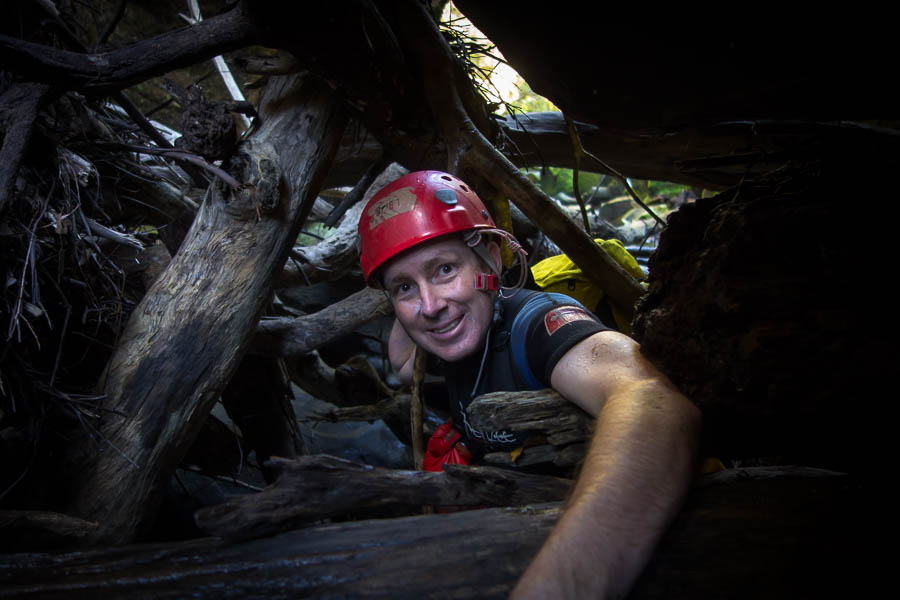 Tom trying to find a way through the hole 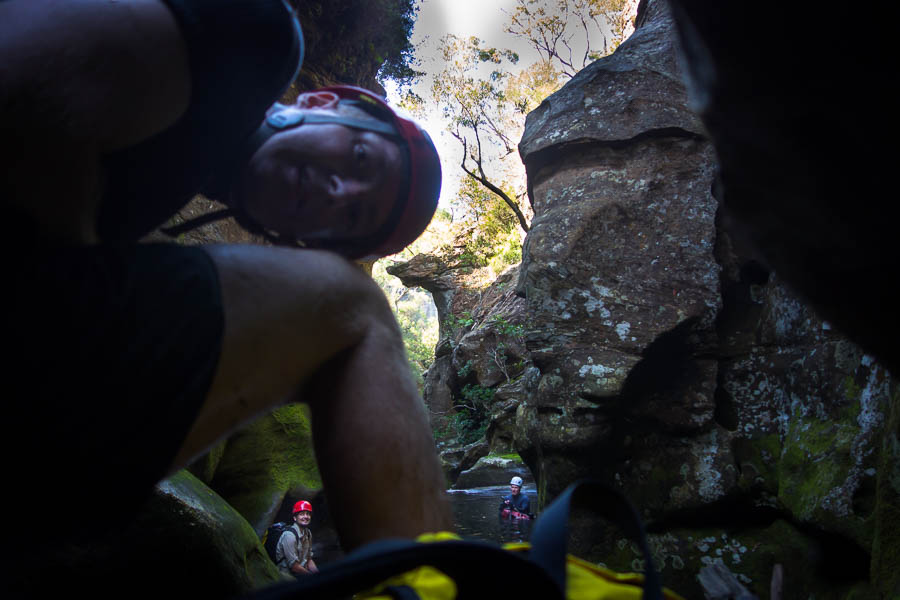 The team and a pretty section of canyon 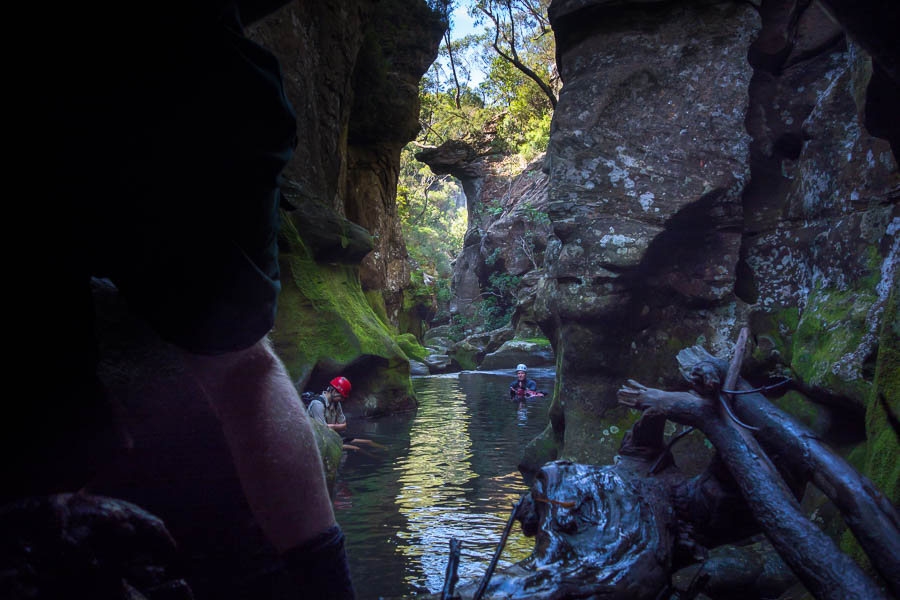 Without Tom blocking the view 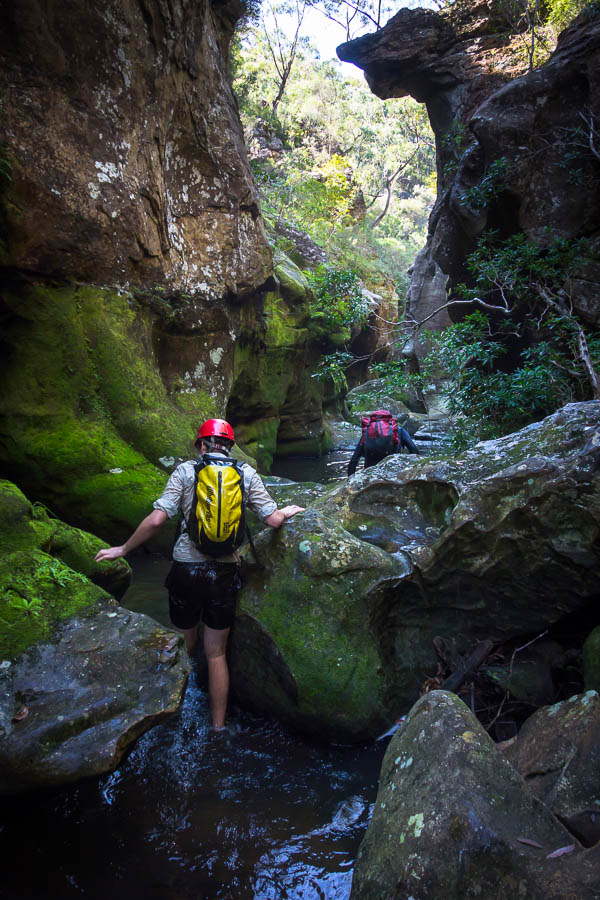 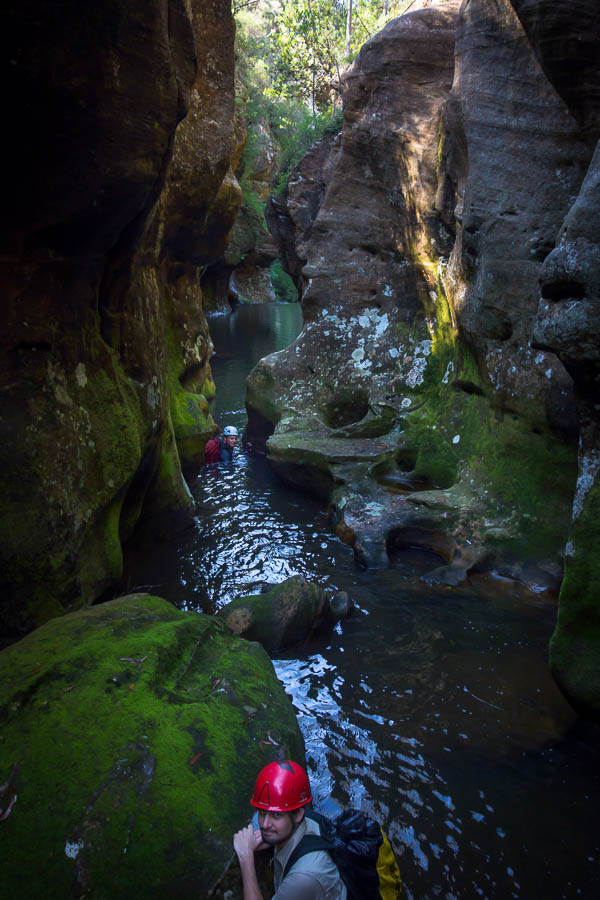 Before long we were at the edge of one of nature’s eternity pools. Somehow I got to go first and find out just how much power was in the water flow. Emerging unscathed, other than my camera (the dry bag is definitely no longer a ‘dry’ bag), I was glad it wasn’t any stronger. 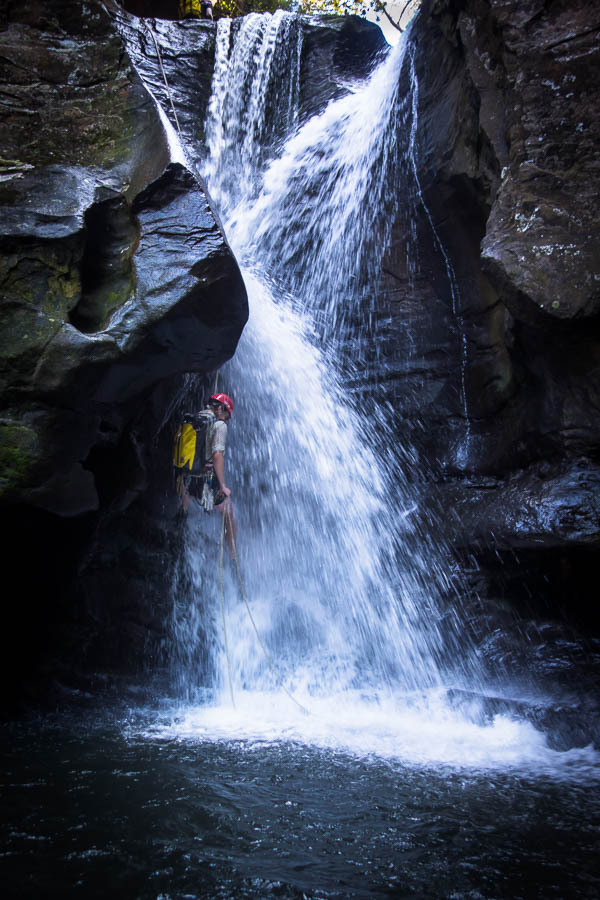 Alex emerges from the waterfall 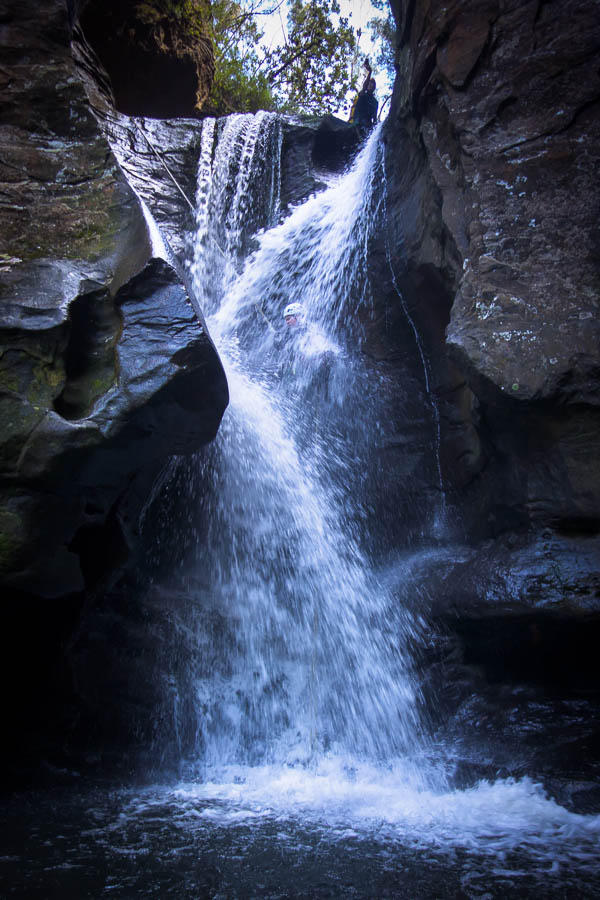 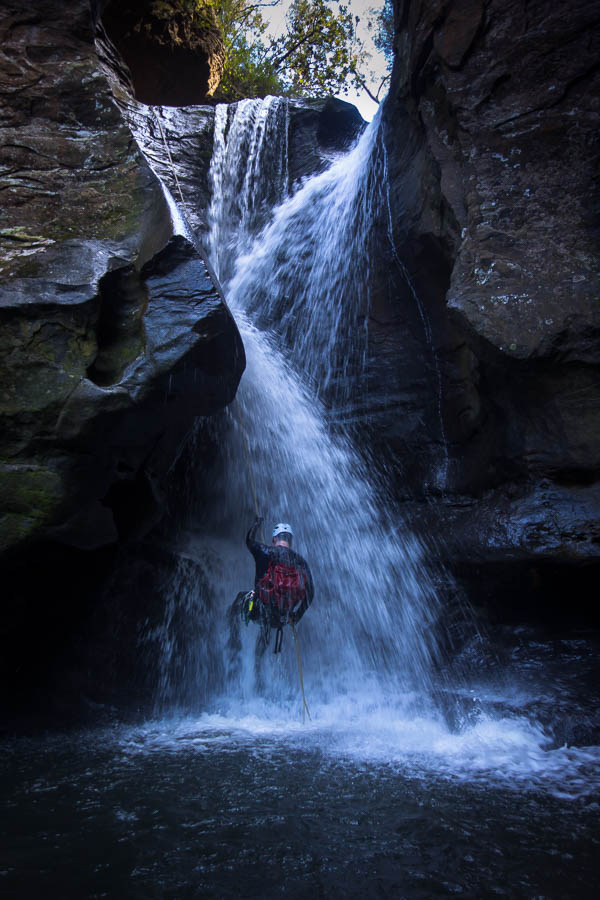 Jon near the bottom 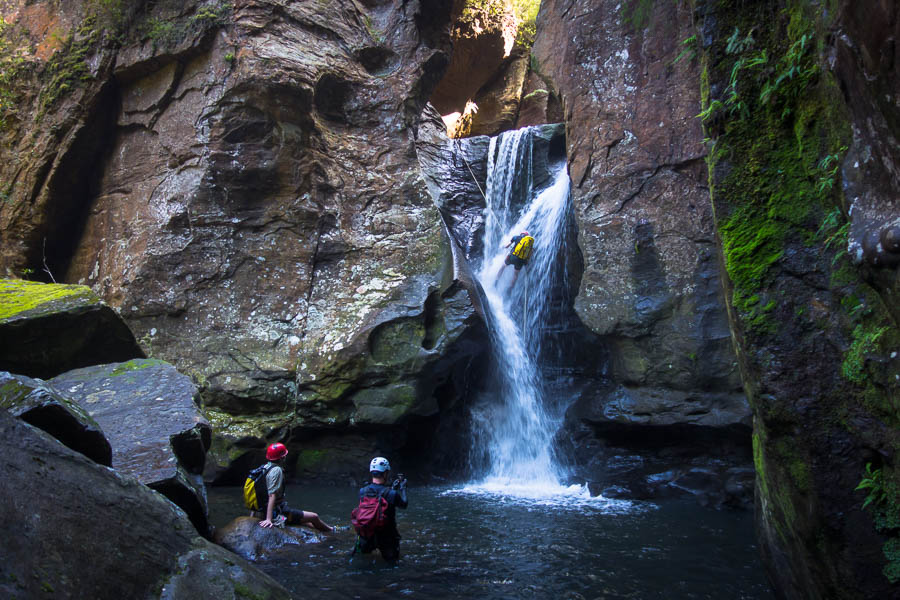 Tom before the worst of it 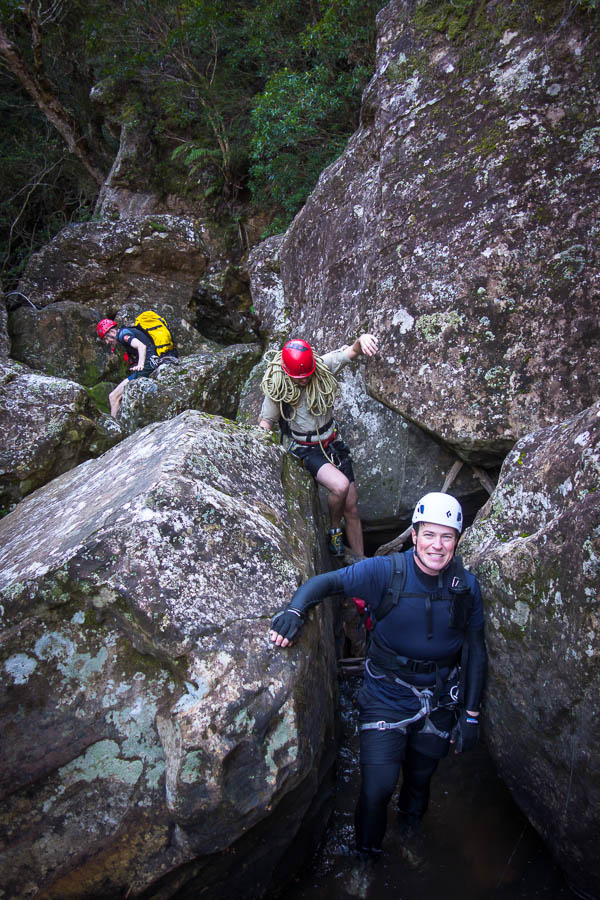 A bit of boulder scrambling 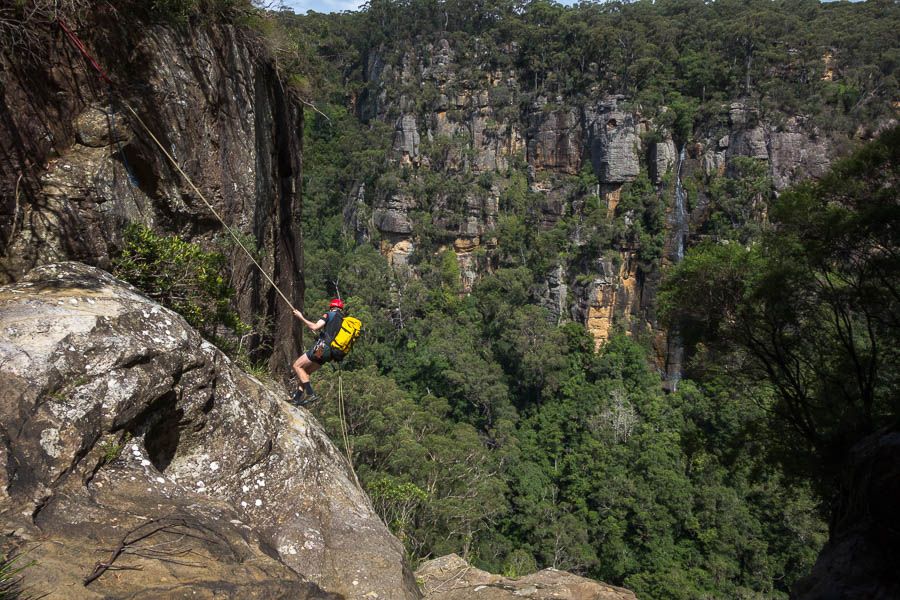 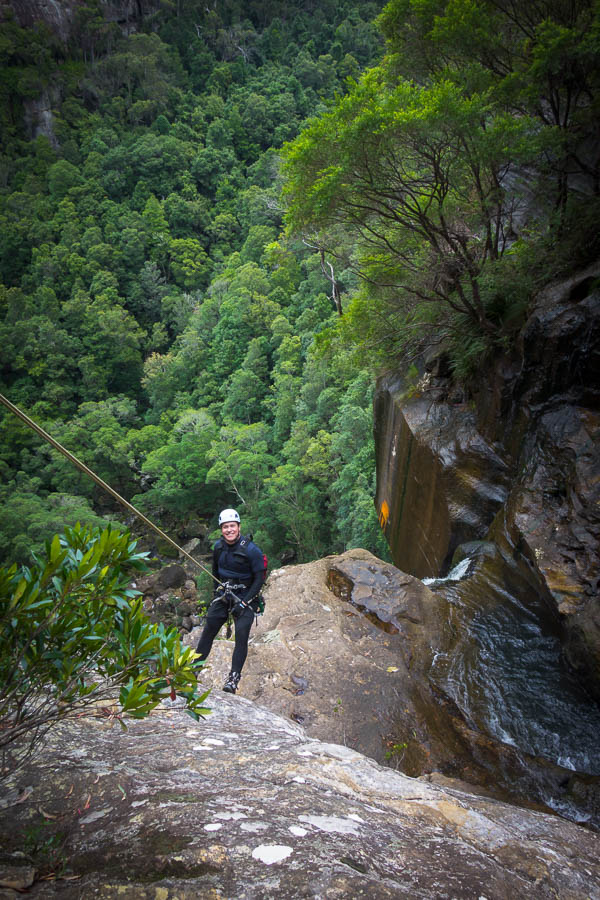 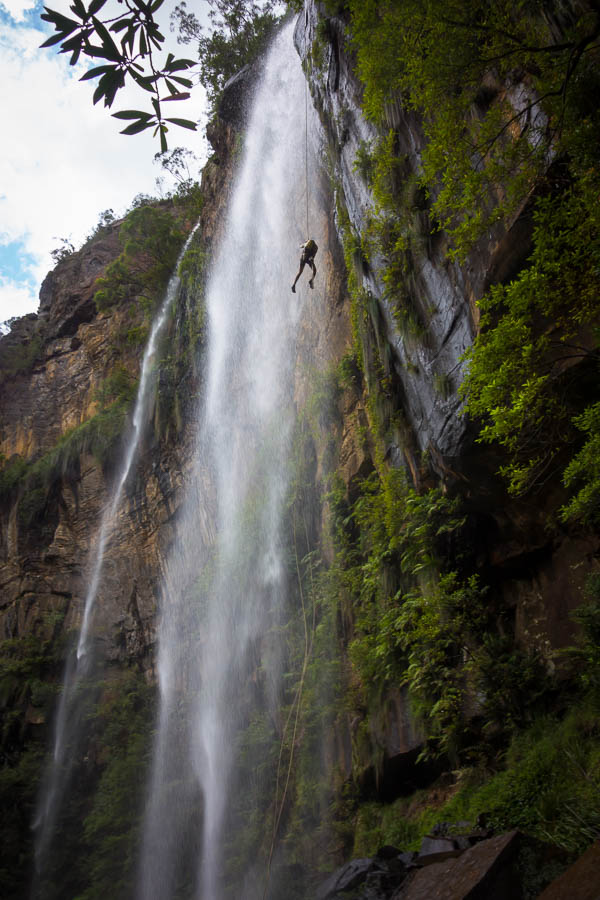 Alex on his way down

Jon wondering where to stop 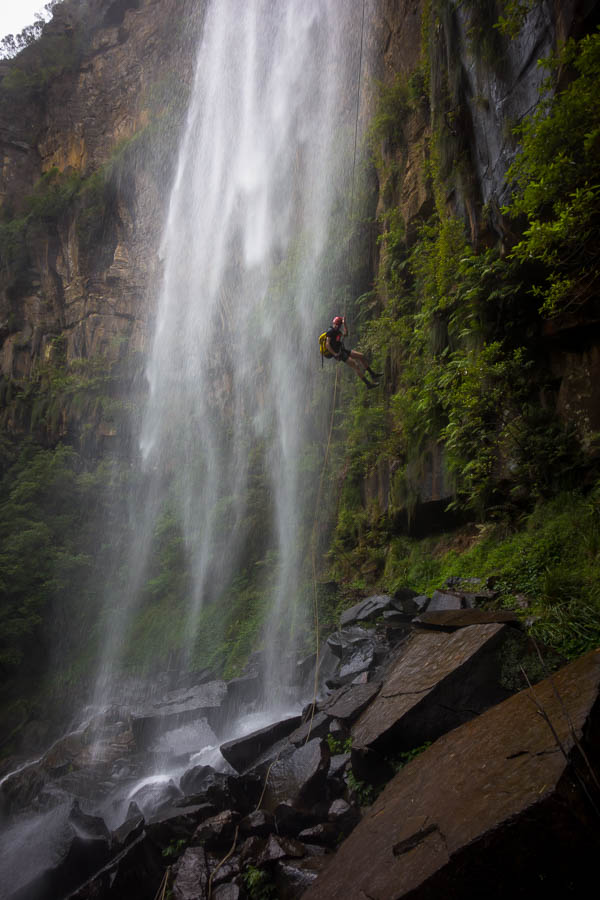 Tom nearly at the bottom 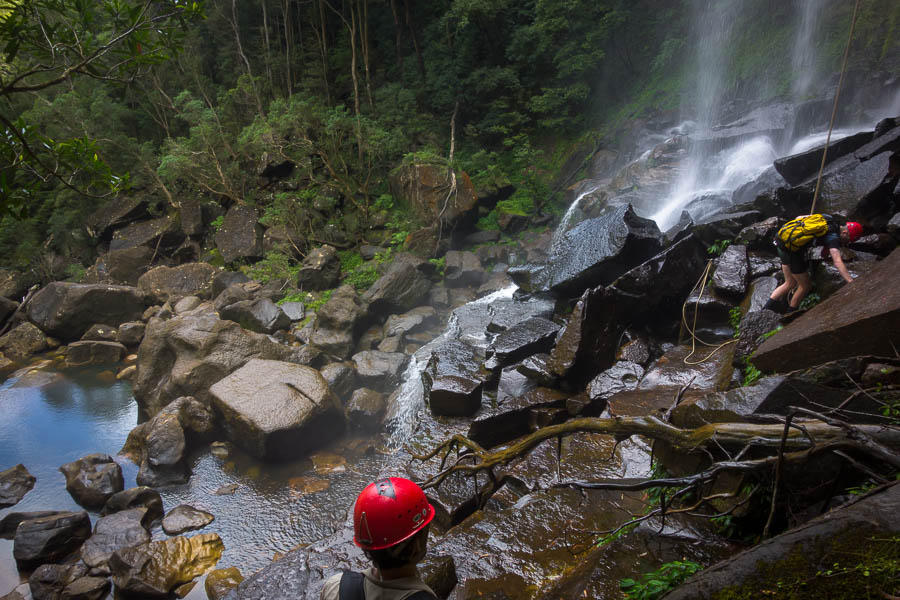 Not quite at the bottom yet though! 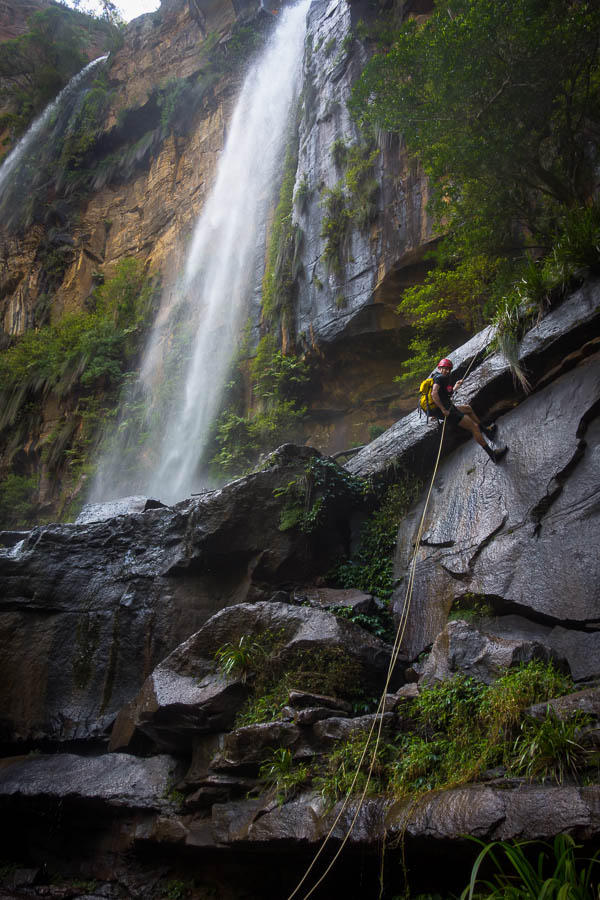 We had lunch at the bottom of the big fall enjoying the views of the beautiful waterfall. 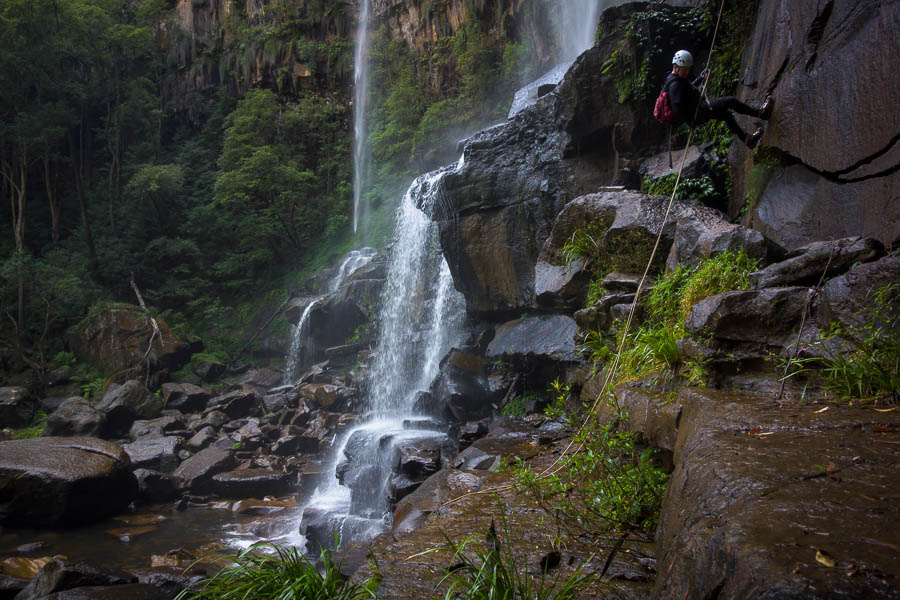 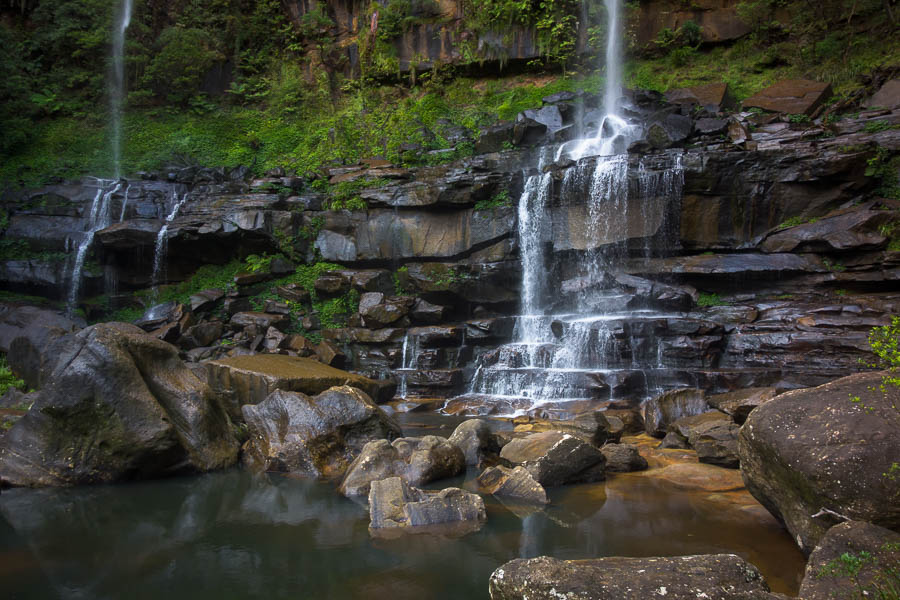 From there it was a straight-forward walk out. 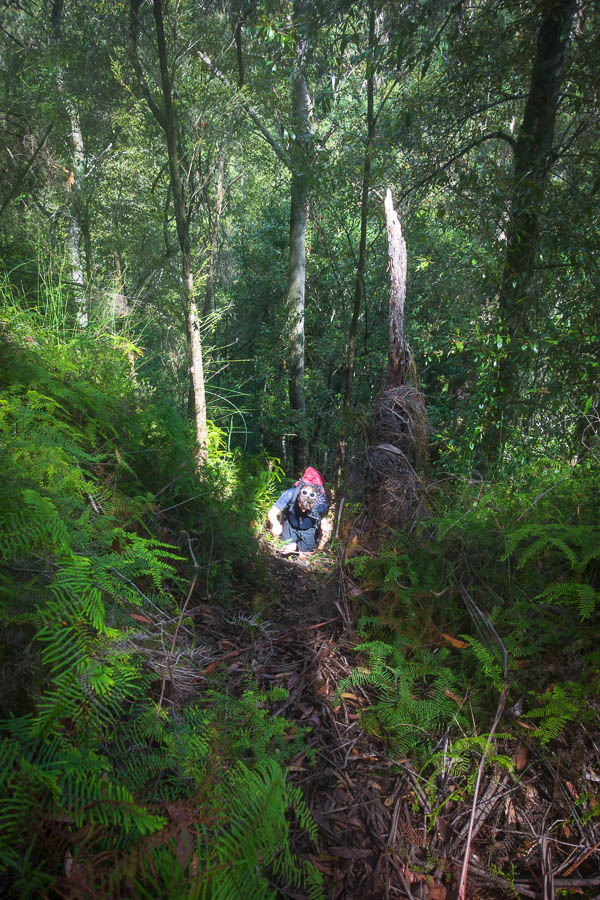 Jon on the way out

My main complaint at the end was that we were out too soon after lunch! I hadn’t really worked up an appetite for something from the Robertson Pie Shop. Nonetheless that didn’t stop me indulging in a caramel macadamia tart.

An excellent short day, giving us plenty of time to get to the reunion, enjoy a swim in the river before settling in for a convivial, if occasionally wet, night around the campfire.