Australia Day fell on a Tuesday this year so it only made sense to take the Monday off work and turn it into a 4 day long weekend. Tom had a plan which he showed me on the Friday night. The plan was full of caveats that we might go several kilometres up a creek and find an obstacle and not be able to find a pass out and have to retreat. Why not do the trip in the other direction then? Tom listened to me – which turned out to be a poor idea in retrospect…. but I’m getting ahead of myself as we wouldn’t find that out until day 3.

The forecast for the 4 days was for a heatwave over NSW. Temperatures around the area we were going to be in were expected to be around 30°C each day. Subsequently we were hoping to spend most of our time in creeks!

We knocked off the ridge walking to get into our creek system by late morning on day 1, glad to have morning tea in relative cool of the creek.

After that we hit one of the few (only?) keeper potholes I have encountered in the Blue Mountains which looks to operate in keeper mode most of the time. Fortunately it was easily bypassed by abseiling into the creek downstream of it. From there we abseiled and waded our way downstream. We sweltered at times in our wetsuits as the canyon was fairly open and shallow. 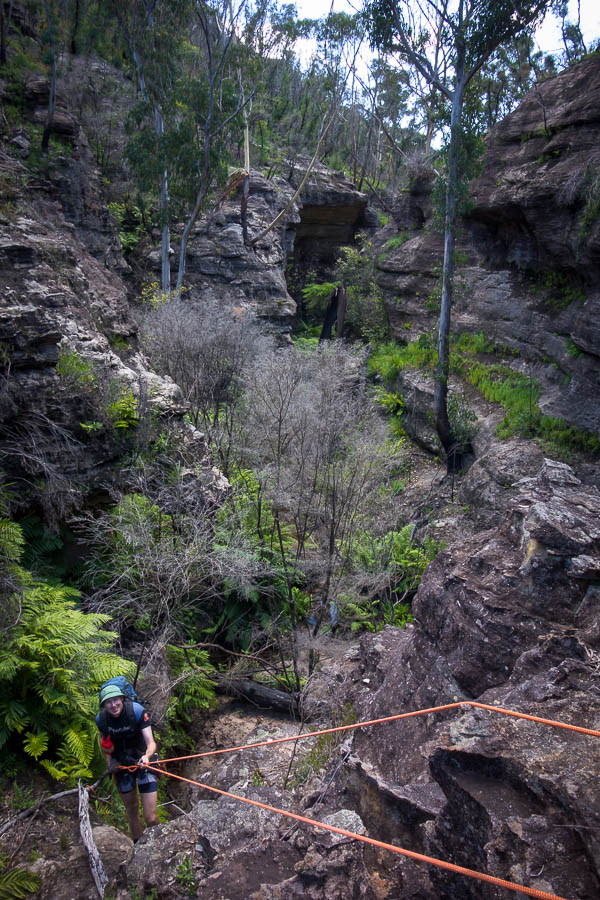 Tom on the second abseil in our first canyon 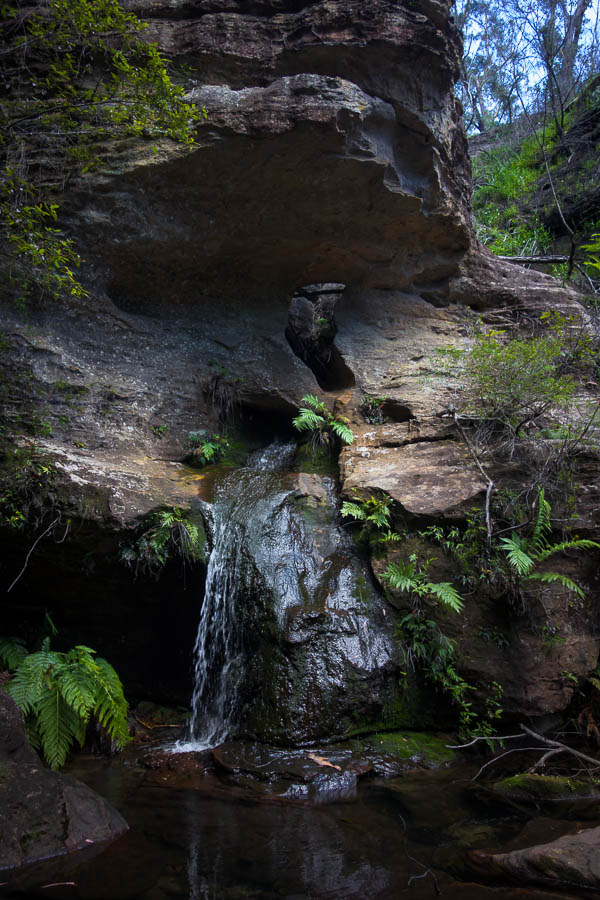 Below the second abseil 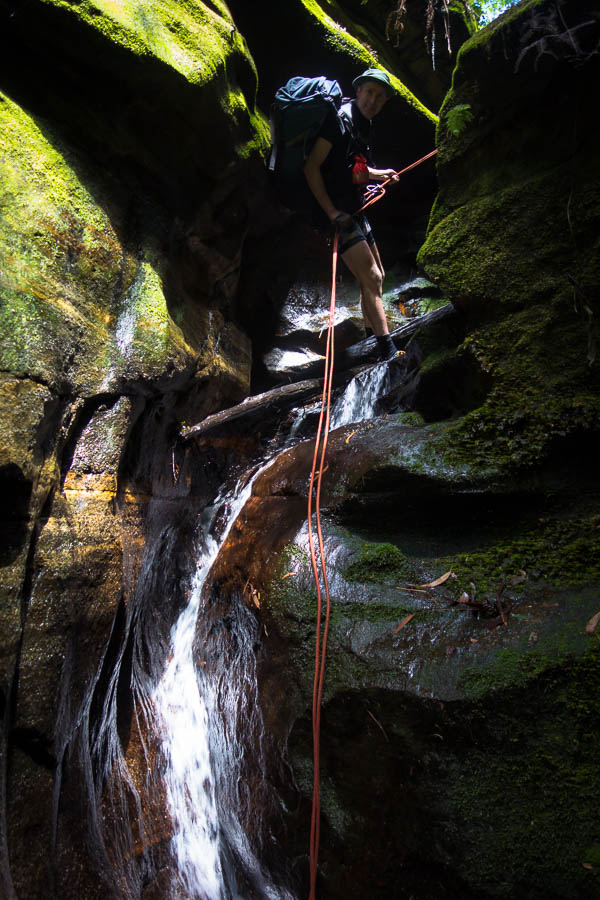 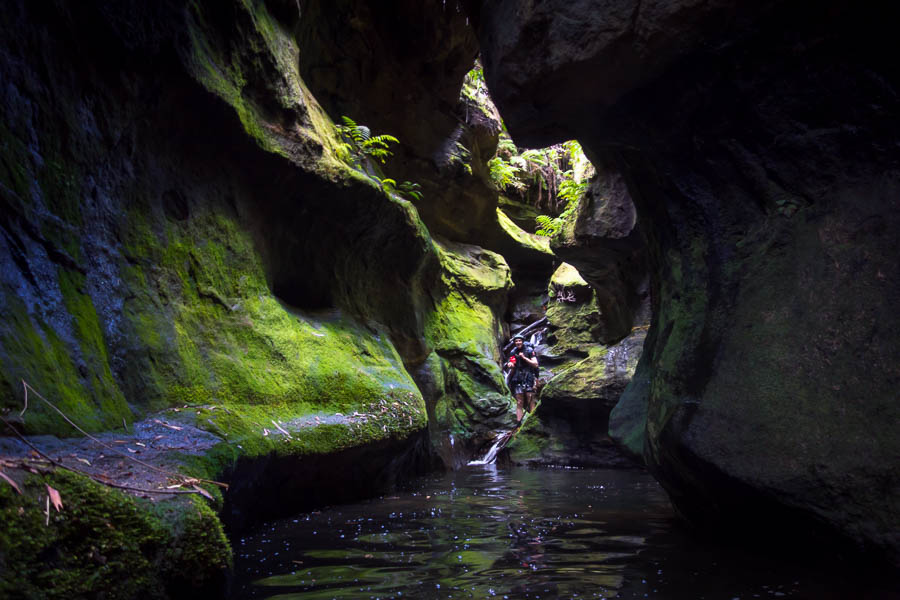 Tom in the canyon 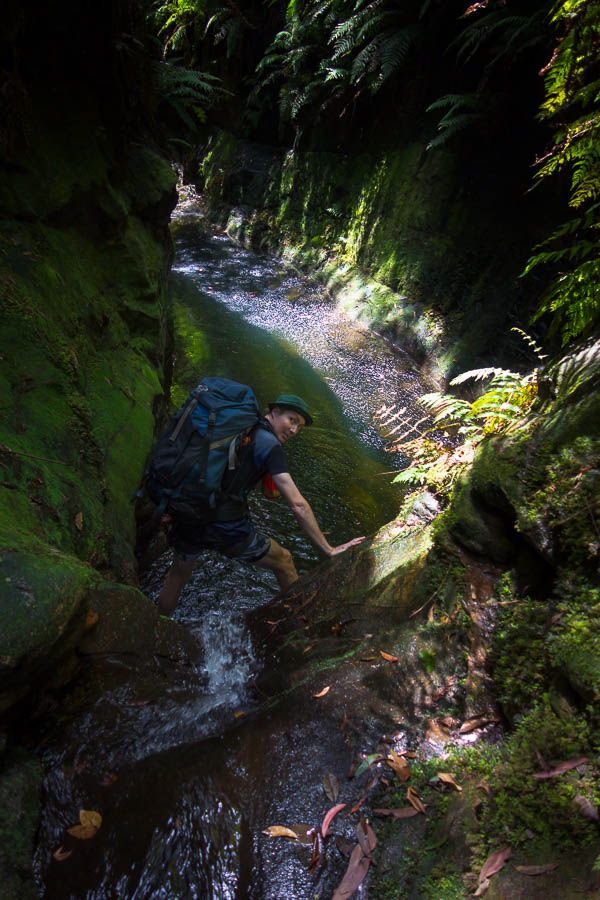 Tom still in the canyon

After a long section of creek walking we eventually hit what Tom said would be the final abseil. As it turned out we ended up doing another one, but perhaps in more drought-like conditions it could have been down climbed. 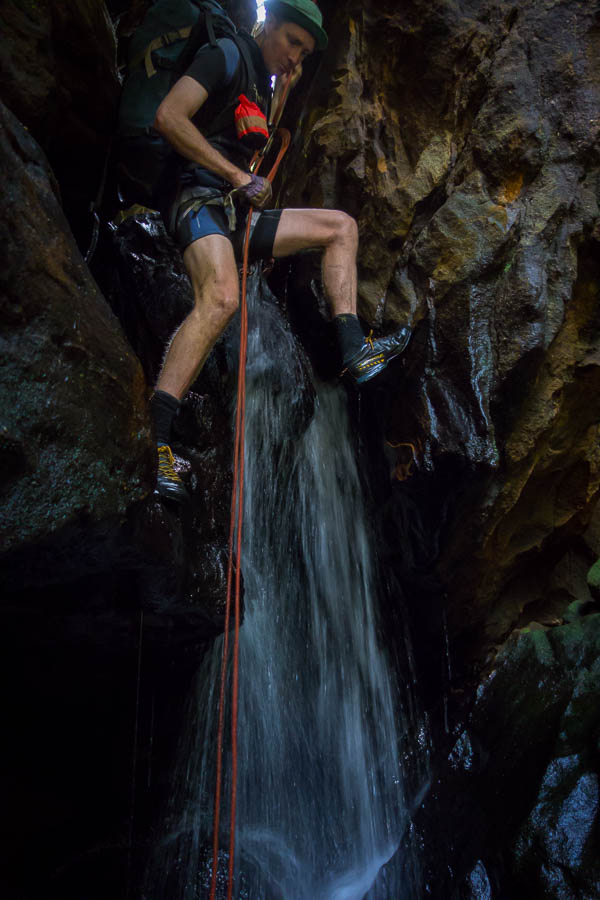 The final (not) awkward abseil 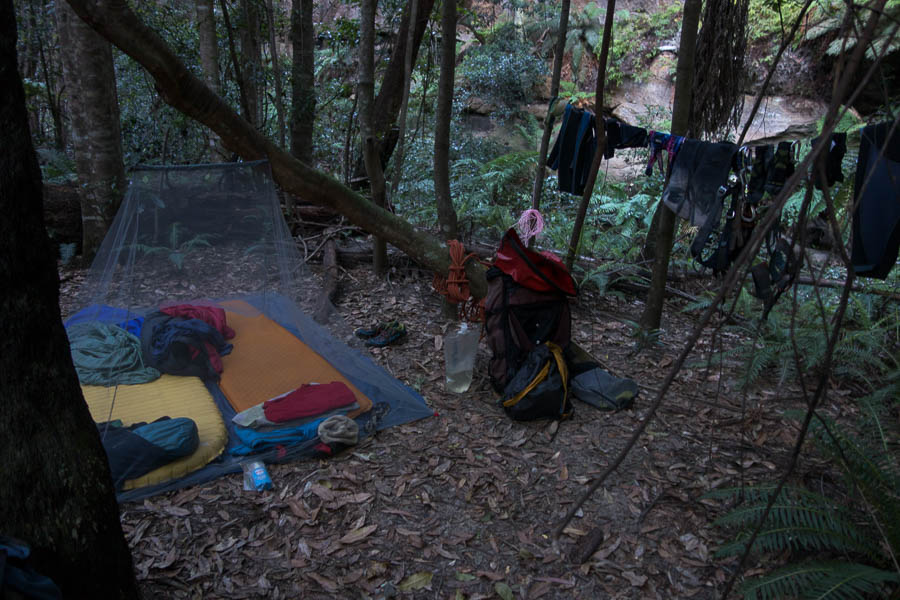 The next day we headed down the several kilometres of creek which might have had an impassable obstacle and no way round. We didn’t find any – which just shows you never know till you go. 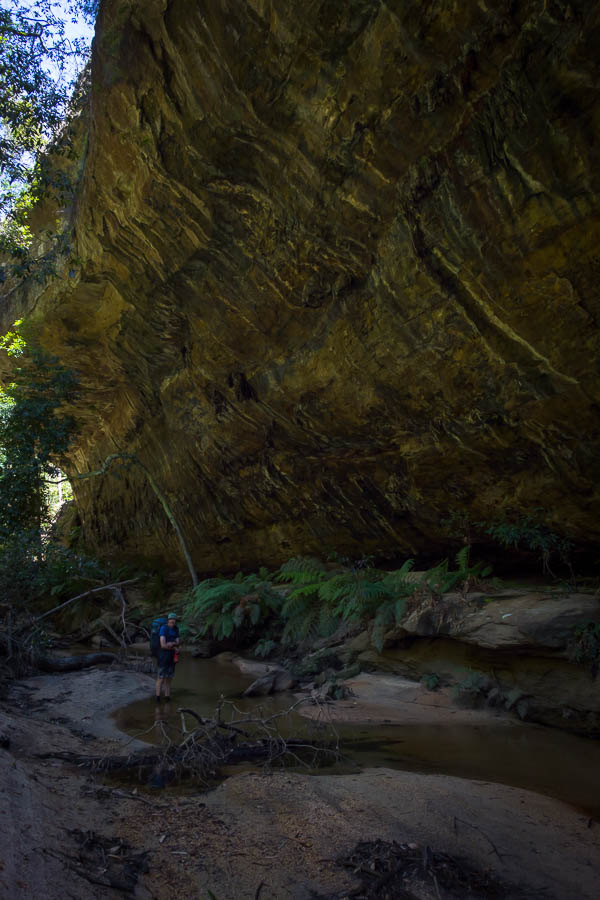 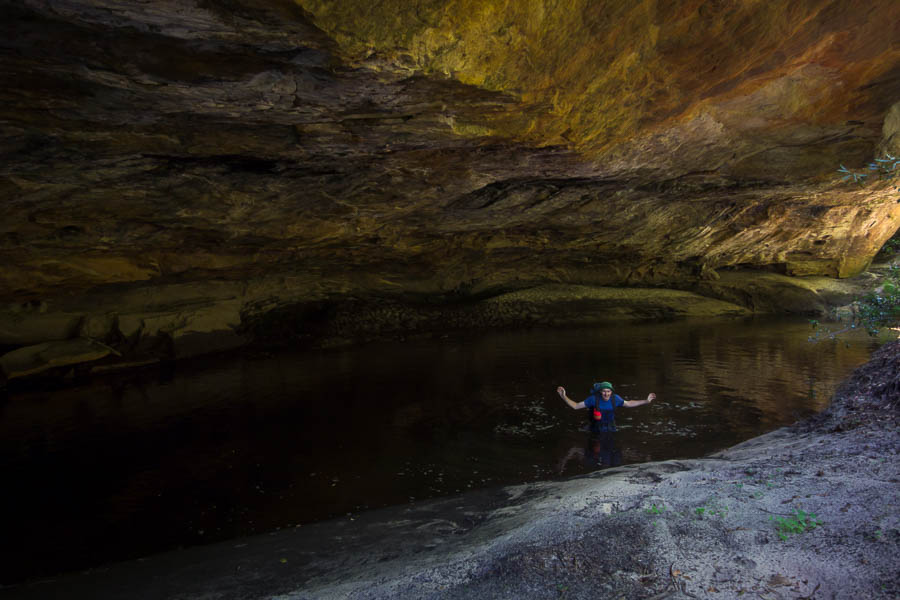 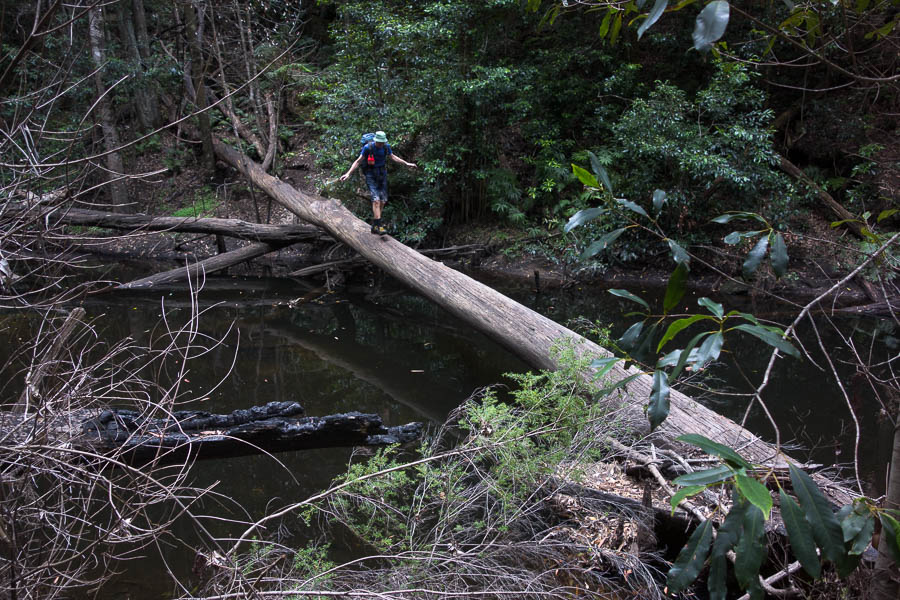 Crossing a wide section of creek 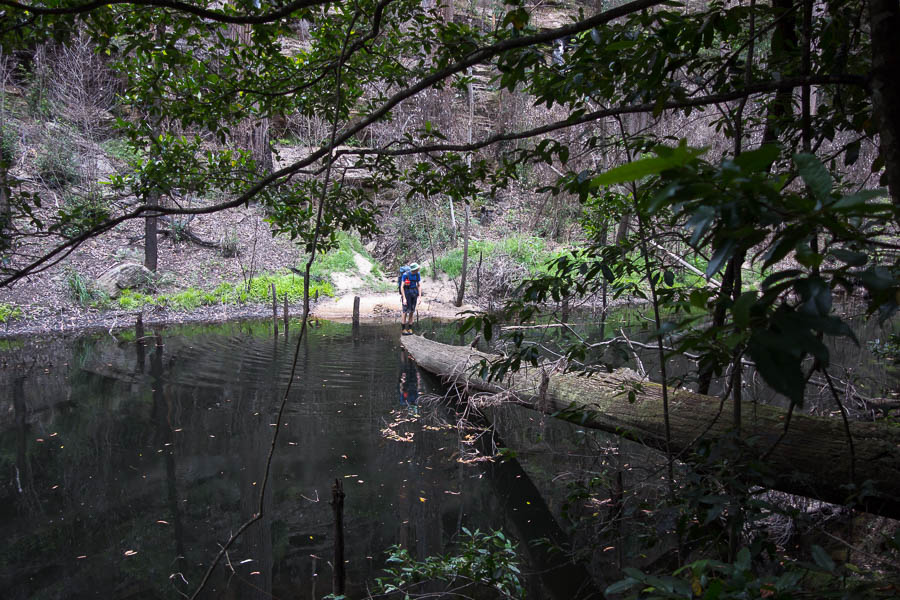 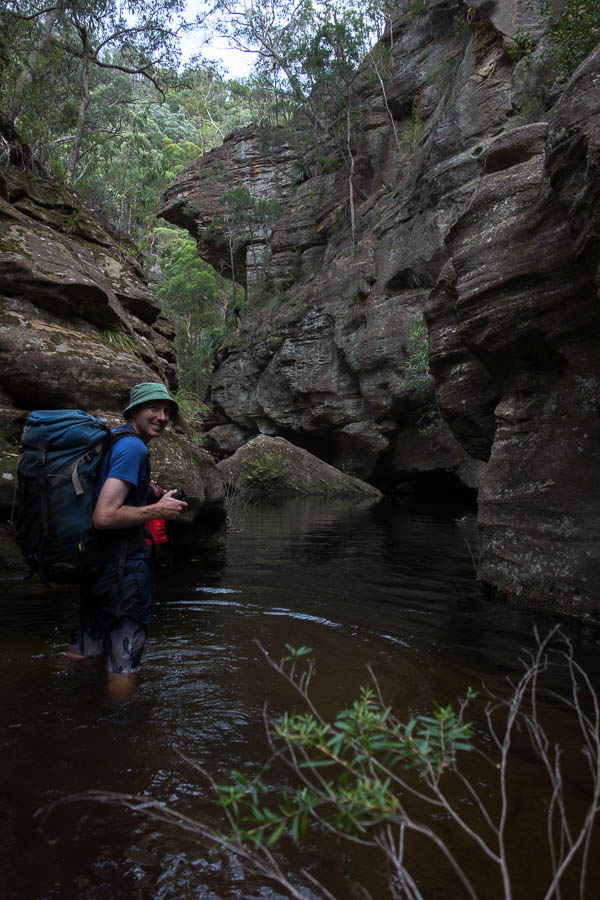 Finally something that resembles a canyon

Eventually we decided we should make camp. There had been plenty of options through the day, but as is typical at the point where you start wanting a campsite they dry up. We did employ a fairly inefficient method of finding a campsite, which probably made the whole process take three times as long as it should. However, eventually we found ourselves a nice raised sandbank. It was a very warm evening and even with our mossie net allowing us the luxury of not being mauled by mossies outside our sleeping bags I was still a sweaty mess. 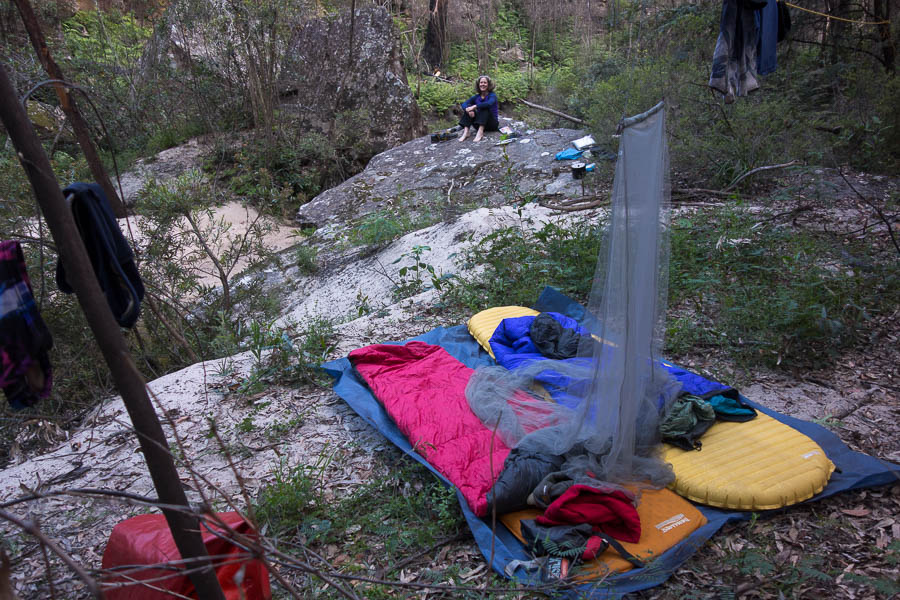 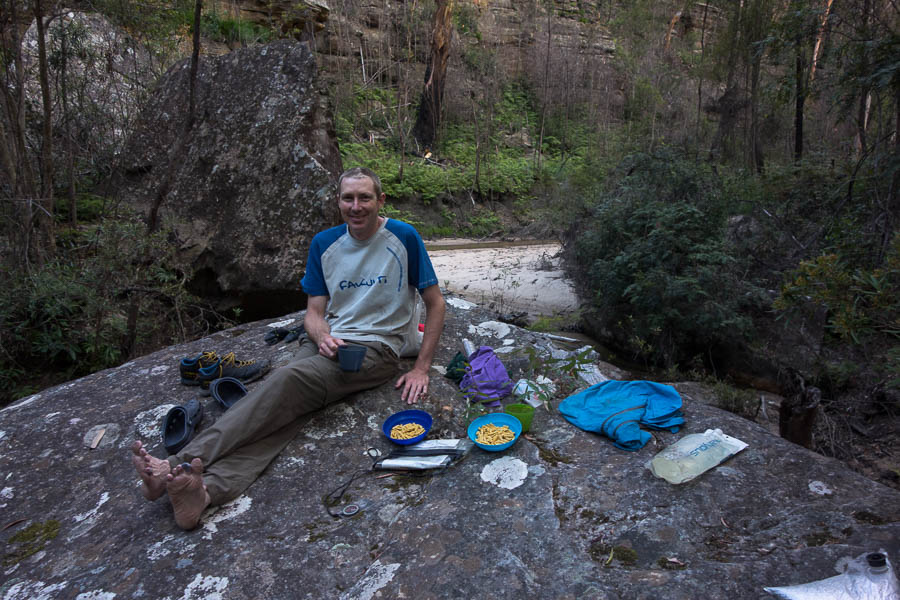 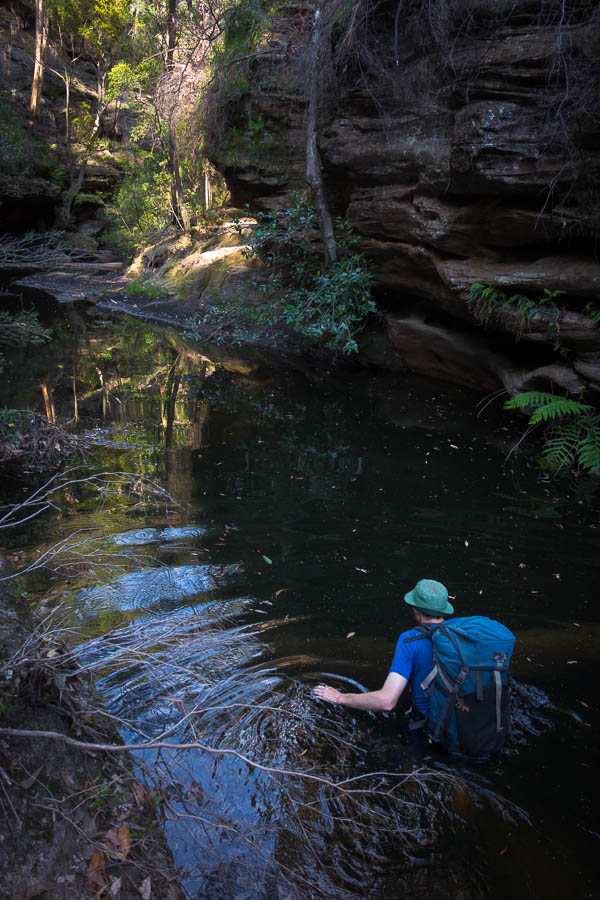 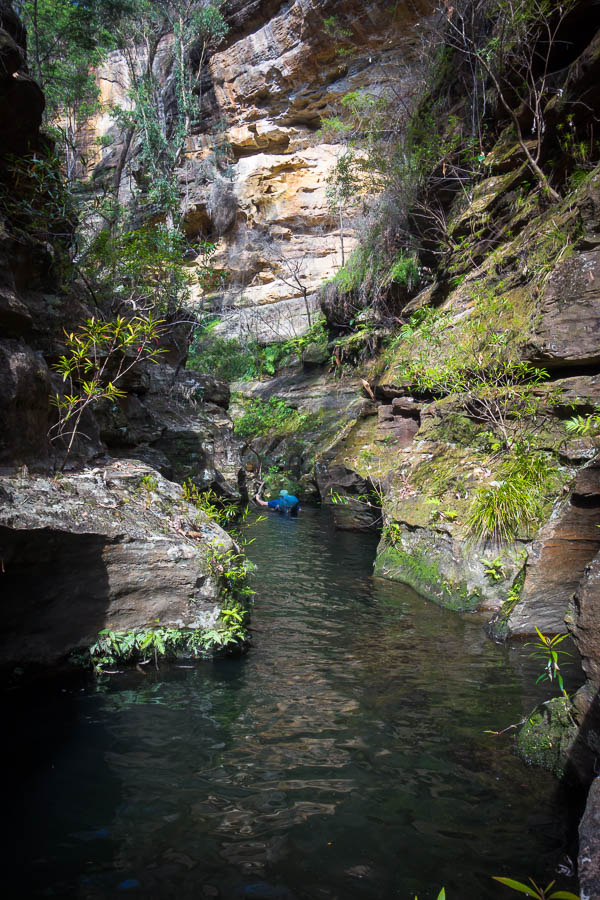 Our third day was the least “successful”. Our plan to ascend a creek was stymied fairly early on. We managed to bypass one obstacle by climbing high around it, only to hit another obstacle shortly afterwards. Perhaps we could have climbed around it, but there was still a long way to go and the further up we went the longer we’d have to retreat if we got stuck. Reluctantly we bailed out onto the ridge. It wasn’t that far to walk around to the upper section of the creek… but even if it was only a couple of hours with the heat it was pretty oppressive. 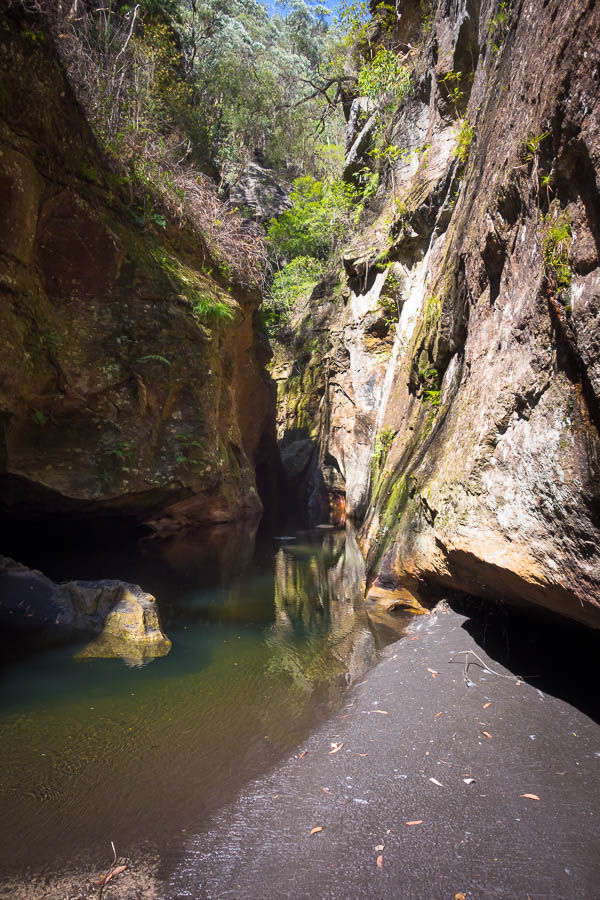 The end of our attempt to go up this creek

A late lunch back in the shade of a side canyon was a welcome relief. Unfortunately that episode really took it out of us and we didn’t have a lot of energy left for exploration for the rest of the day. 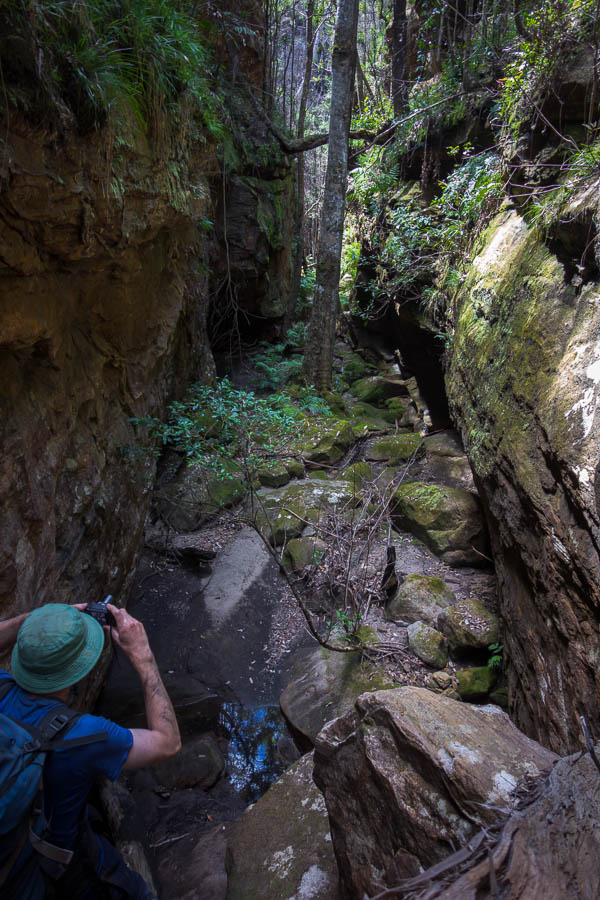 Some hours later, having survived the blazing heat of the ridges, we are back in a side creek 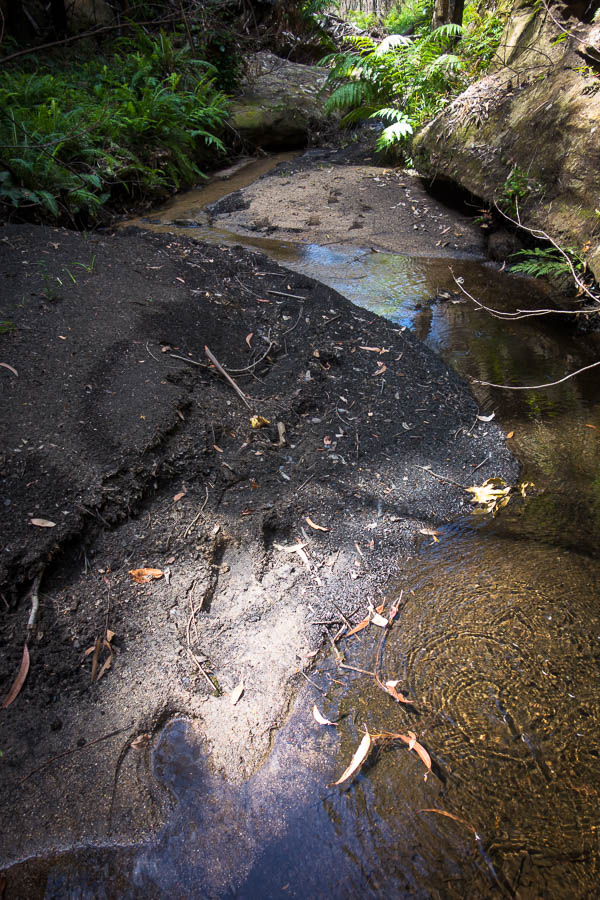 We are not alone! We followed these footprints for the rest of the day

When we found a not particularly good camp cave at 4pm there was unanimous agreement that we should call it a day. A full body immersion in a pool downstream was welcome, as was the temperature dropping a bit overnight. 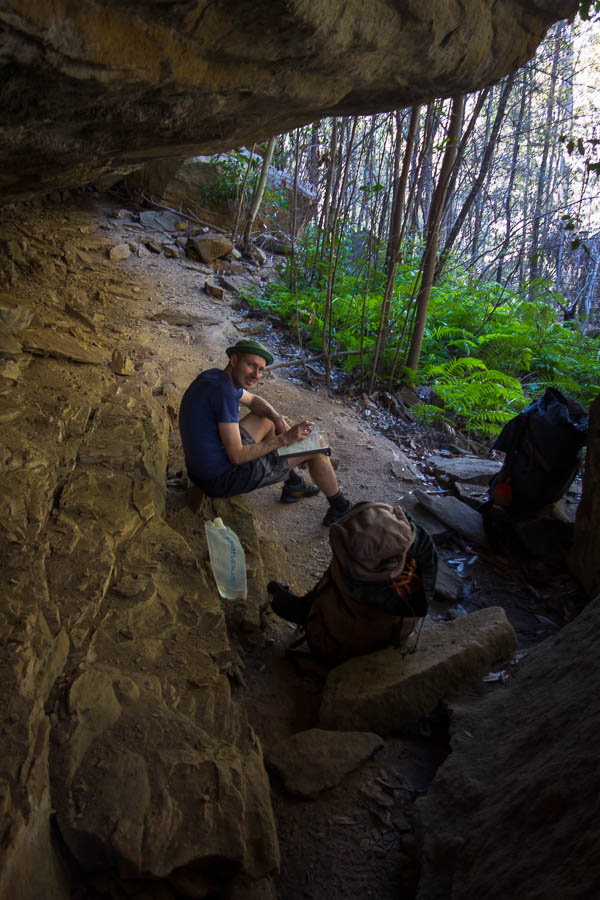 After our experience on the ridge the previous day we agreed to get moving early on day 4. We were walking before 7:30am and decided to roll the dice and ascend another side creek. Fortunately this time luck was on our side and we managed to get almost the whole way up it, and once we were stymied we forced our way out onto the ridge. 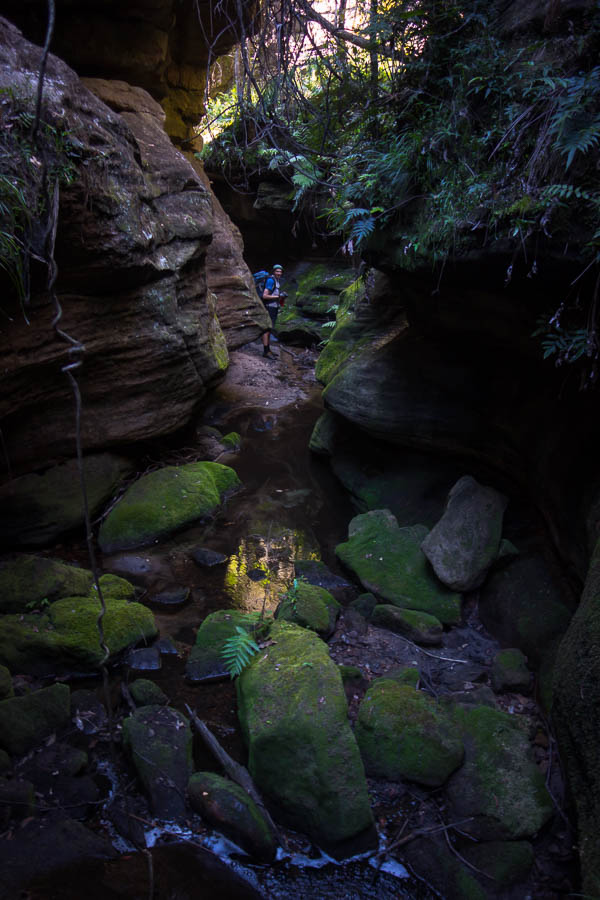 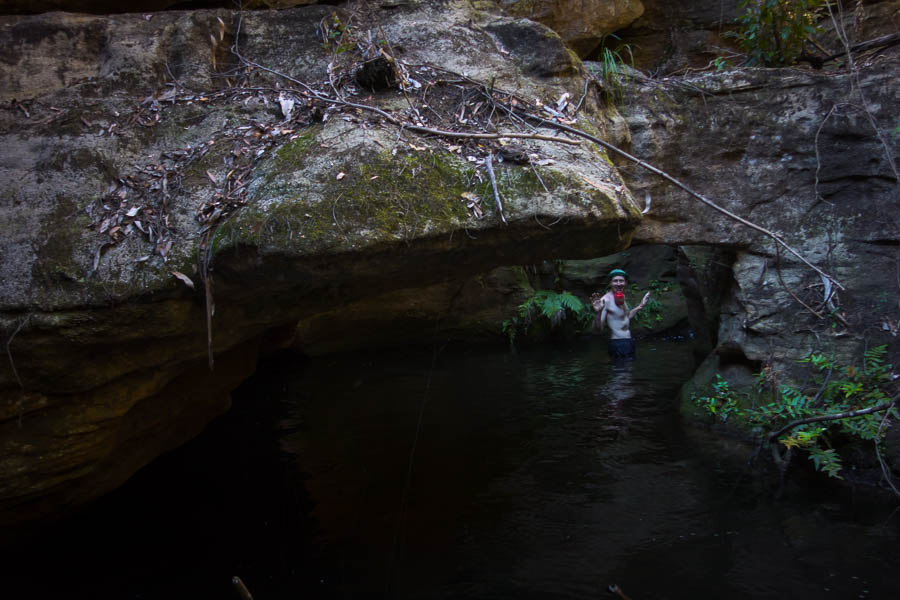 We did drop back in and explore the upper section which was very nice canyon, but I didn’t take my camera so no photos!

From there we had the ridge-bash back to Deep Pass, but a reasonable breeze made the temperatures more bearable. We were somewhat surprised to stumble across some gear – particularly since we were on the side of the ridge at the time. I wrote them a “Hi” with stones – whether they noticed it on their return who knows!? To go with the footprints we’d been following it made it feel very busy out there in the wilderness!! 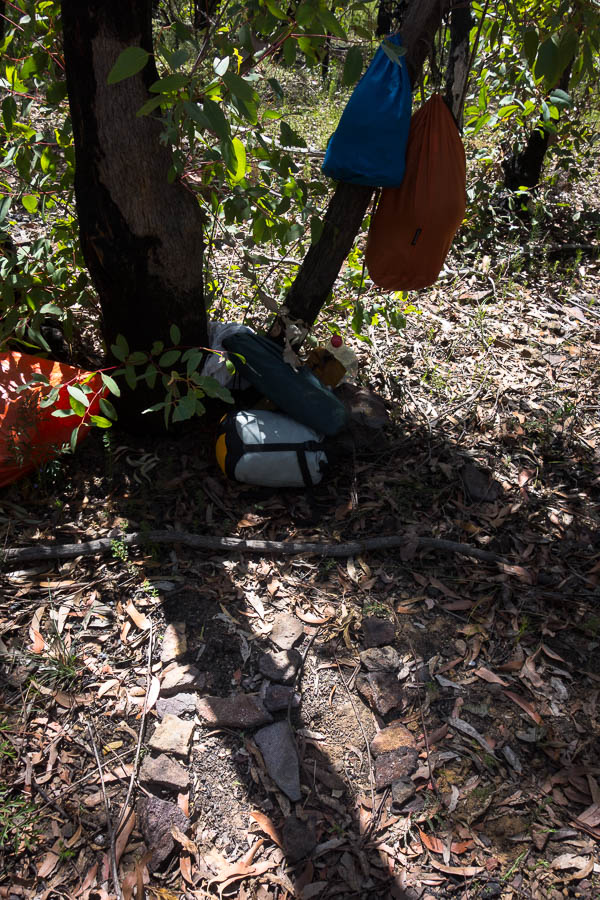 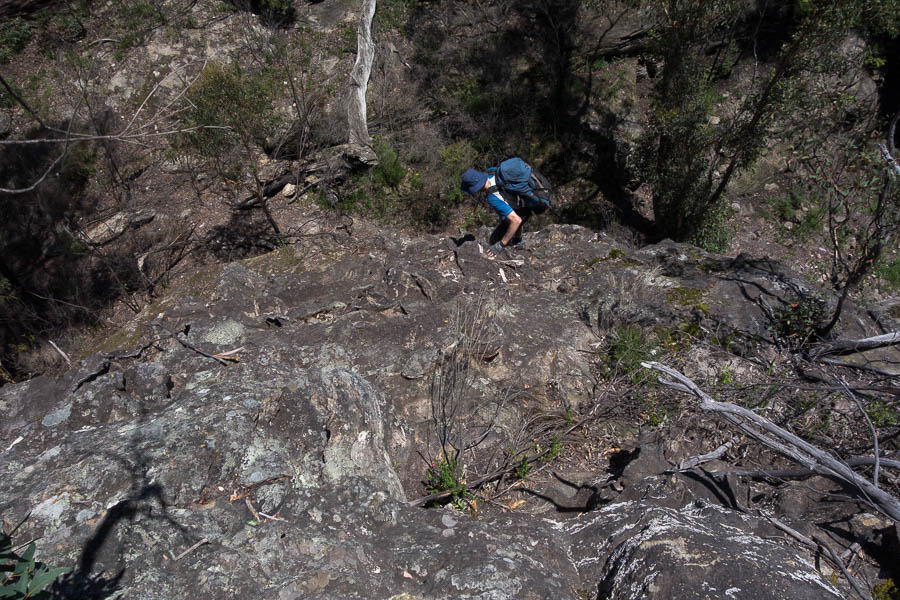 Descending back to Deep Pass

We had lunch at Deep Pass and sent a few groups who couldn’t find the “waterfall” in the right direction. Post lunch we ascended Deep Pass Canyon back to the cars – we bumped into a large group near the top – including some people we knew. 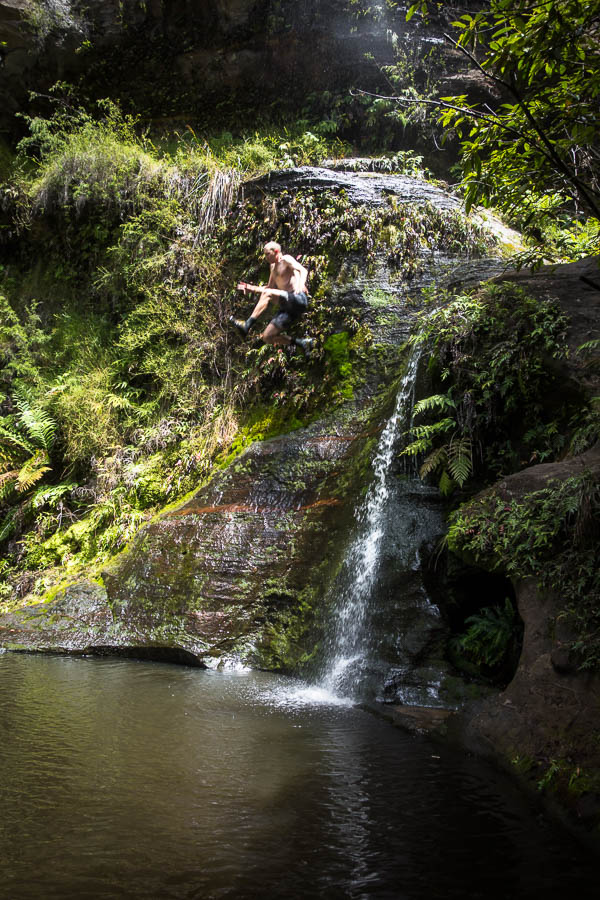 Tom proving he still has the nerve in Deep Pass 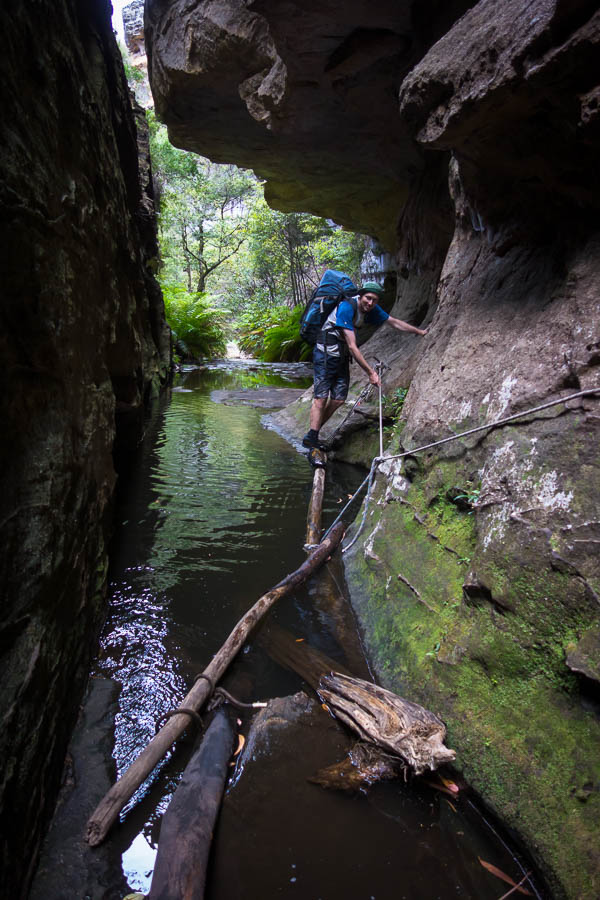 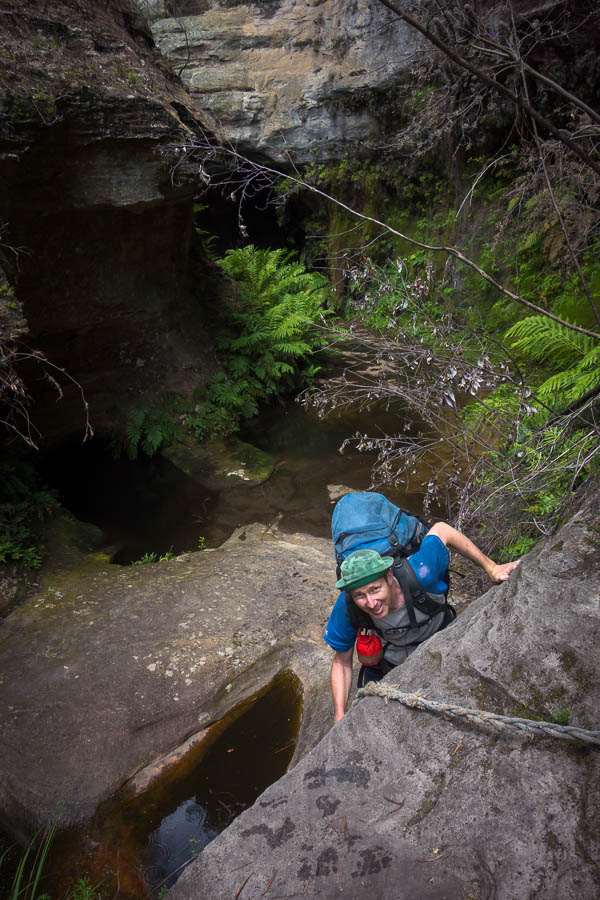 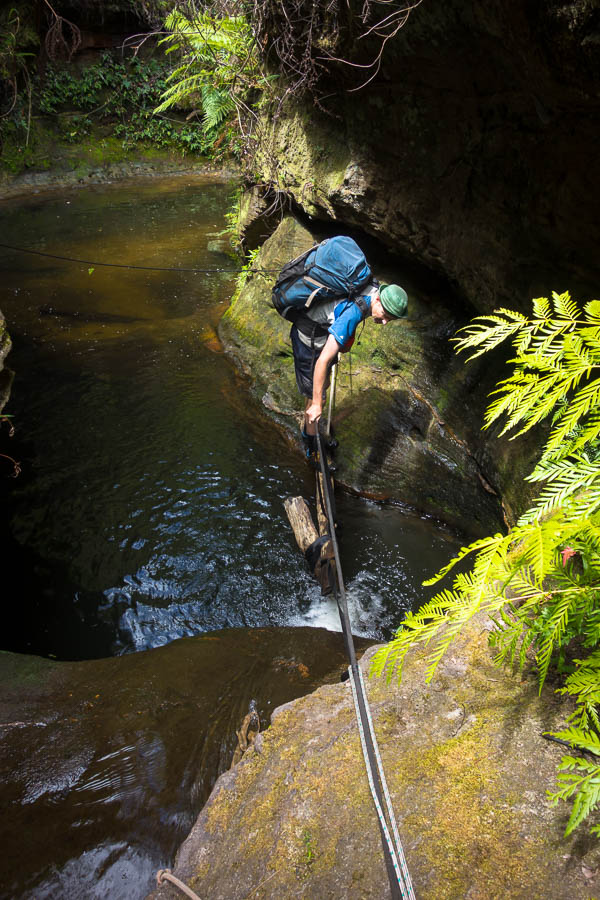 We got to Pie in the Sky in time to claim their last apple pie (but sadly there was only one not two). A good weekend out even if it not quite going to plan.