We had grand plans for a 5-6 day canyoning trip post Christmas. La Niña had other ideas. The forecast between Christmas and New Year alternated between a lot of rain, and a bit of rain, but generally with possible thunderstorms. Having already diced with the weather before Christmas we weren’t overly enthused to take it on in anger again any time soon. Unfortunately the best weather was early on and my visions of lazing around on Boxing Day were dashed as Toni & Smiffy motivated us to get out and join them. At least they had suggested we just meet up in the bush on the evening of the 26th so we didn’t have to get up early on Boxing Day.

Early afternoon we started driving. Part way along Bells Line of Road I had a look at the forecast. “Severe weather warning”. A quick check of the radar showed an intense cell tracking west to east, south of Lithgow. Around Bell we drove into it. Hail and rain smashed down on us. I wondered how much hail you needed to break a windscreen? Most cars were driving at a crawl with their hazard lights on. 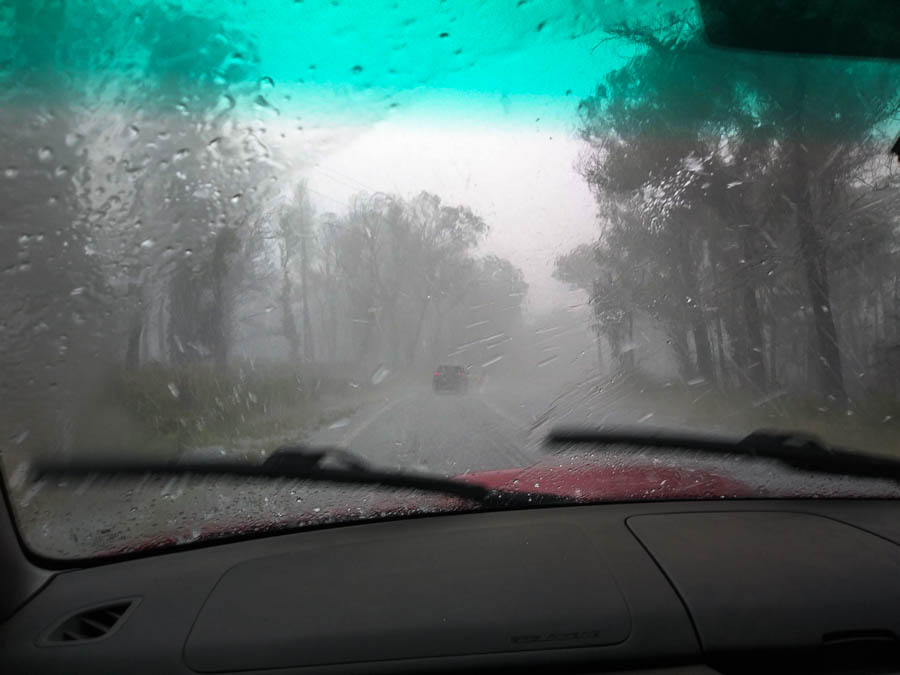 Hail storm on the way

Some cars stopped but the quickest way out of it was to keep driving. By the time we started the descent into Lithgow we could just see the aftermath. Hail all over the road as if it had been snowing. Water pouring off every rock around us. I would not have wanted to be in a canyon constriction. My already weak enthusiasm was being tested. 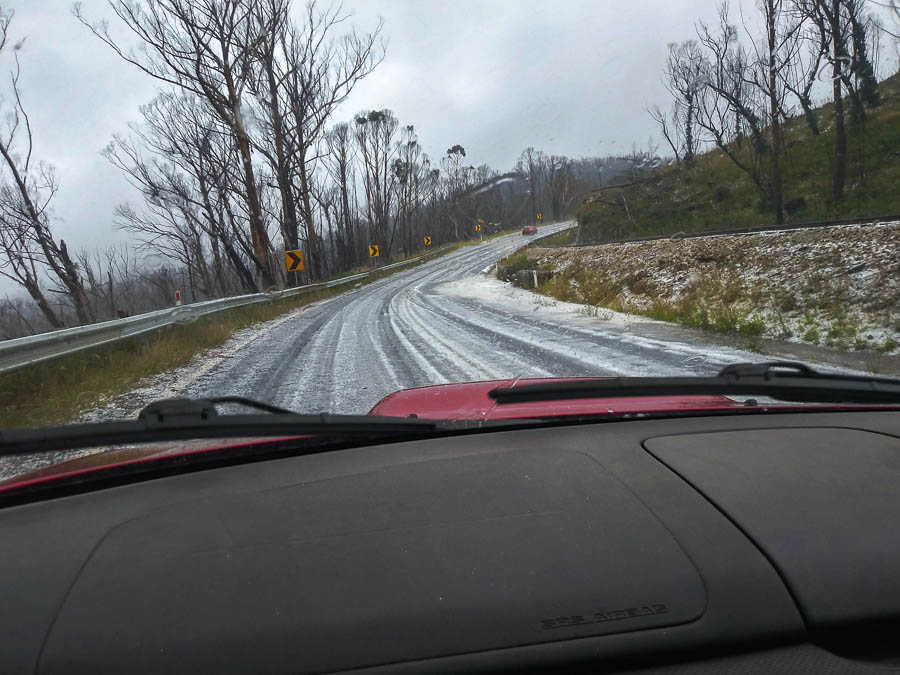 Aftermath of the storm – see how much water/hail is on the road!

Fortunately once we were through the cell it was back to a nice enough day. We left the car at 5pm hoping to be at our pre-arranged meeting spot with Toni & Smiffy by 6:30pm. The thunder started rumbling around us, and I was mentally noting there were a lot of overhangs along the edges of the gully we were ascending. The rain held off and held off, and started teeming down when we were fortunately about 50m away from a decent cave. 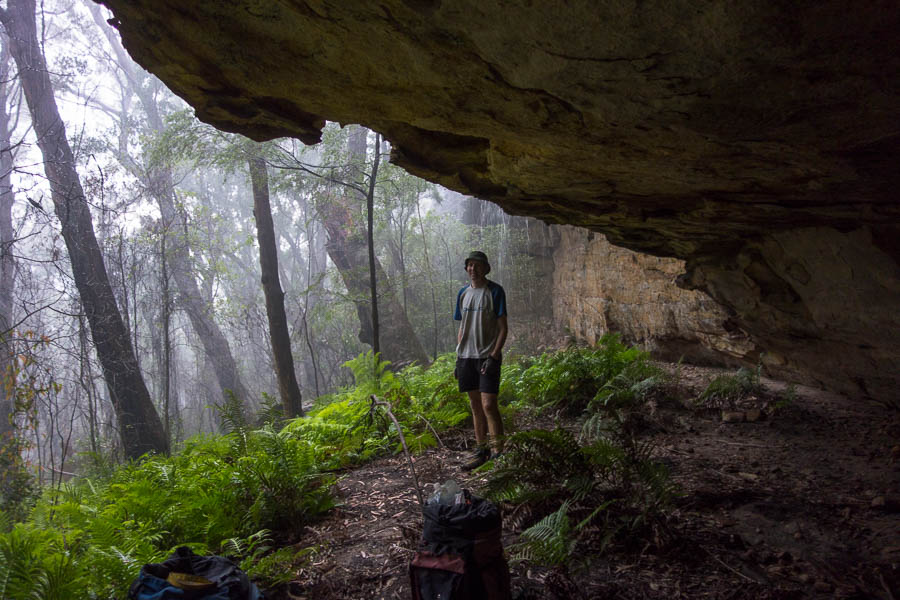 A fine place to shelter from another storm!

Tom looks at the map and realises we’re on the wrong side of the gully. After half an hour of dumping the rain stopped and we sauntered all of 5 minutes around the cliffline to find Toni & Smiffy. At which point both parties admit if it hadn’t been for the others we probably would have all been safely tucked up at home! 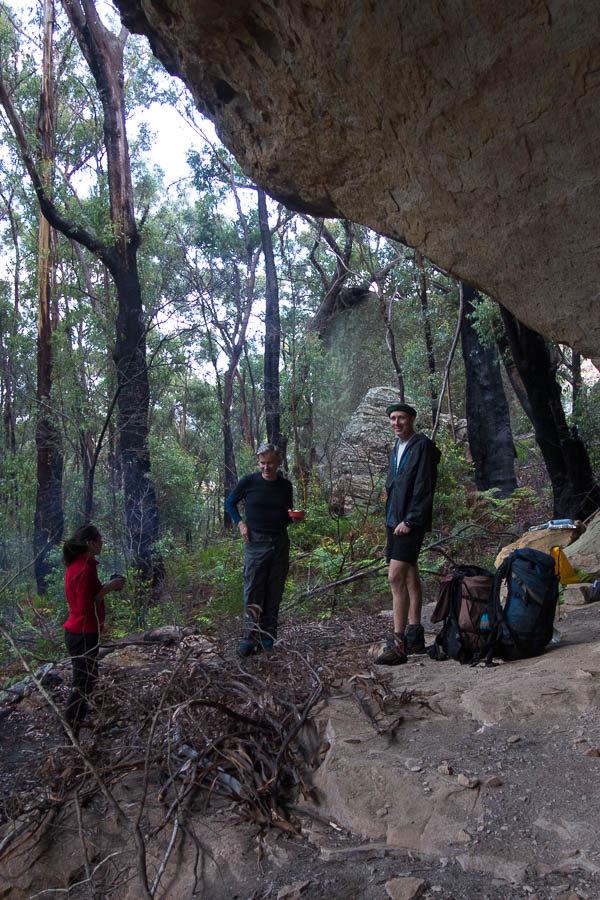 However, the next day rewards us for being out there. A blue sky with no hint of the unsettled weather. 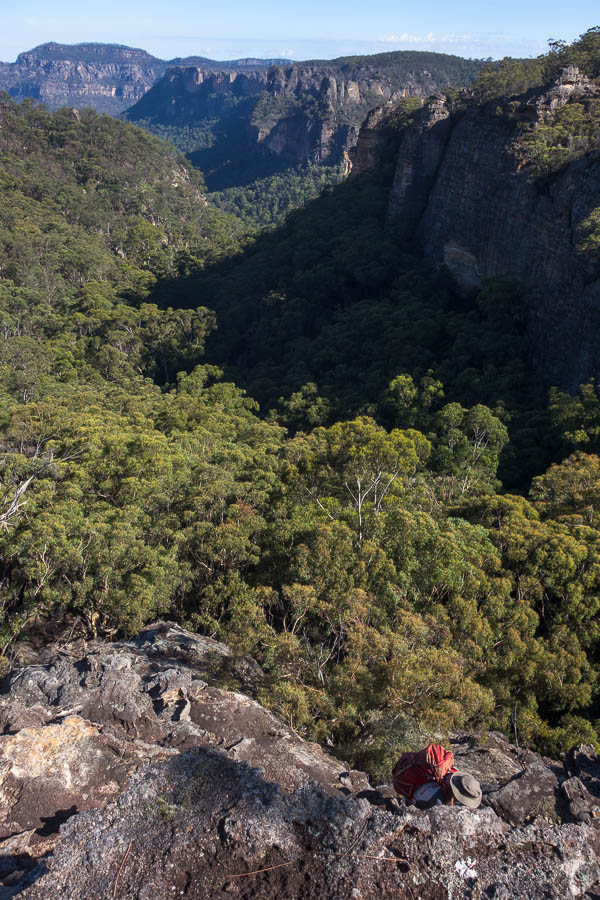 Completely different weather the next day

Eventually we make it down into the creek Tom wants to explore. A sling at the top of the first major drop tells us we’re not the first (though we knew that anyway). With three photographers out of four we don’t set any speed records for our descent. Plus with the storm the night before there was a reasonable water flow, and some blocked up sections to clear out. 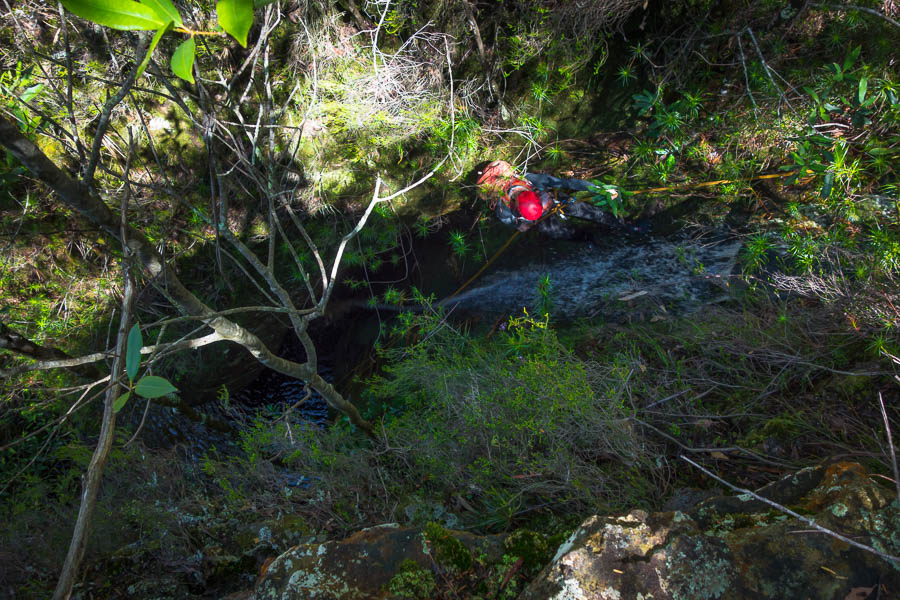 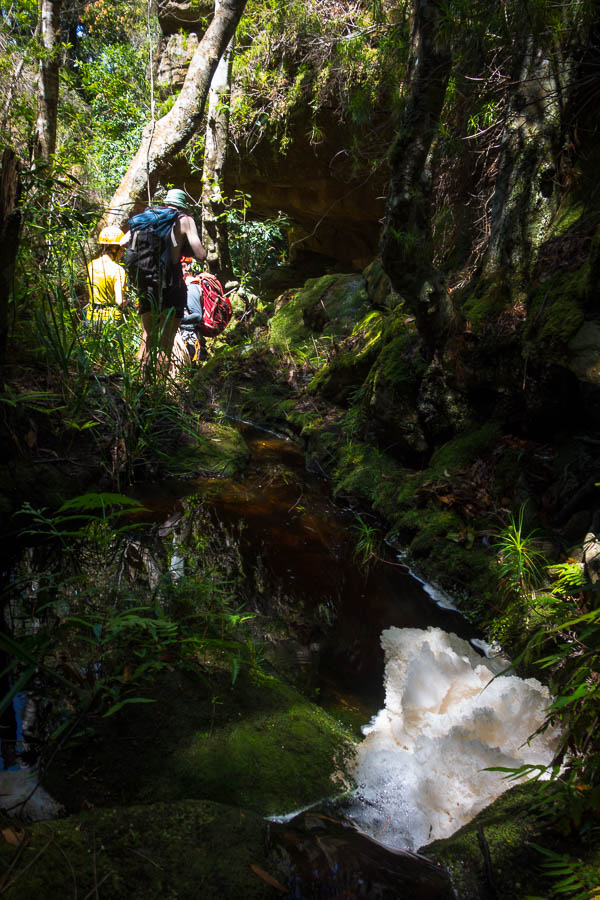 Foam left from the storm the night before 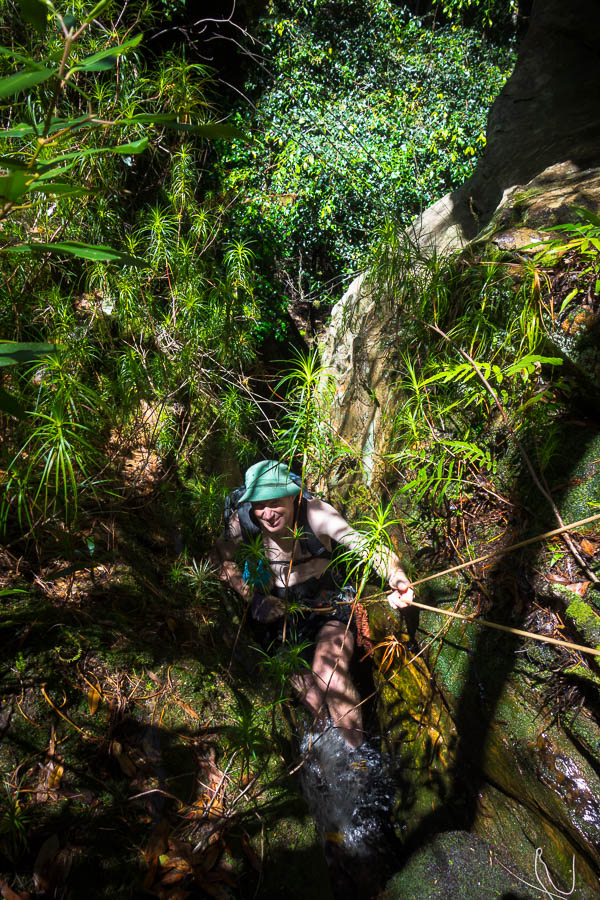 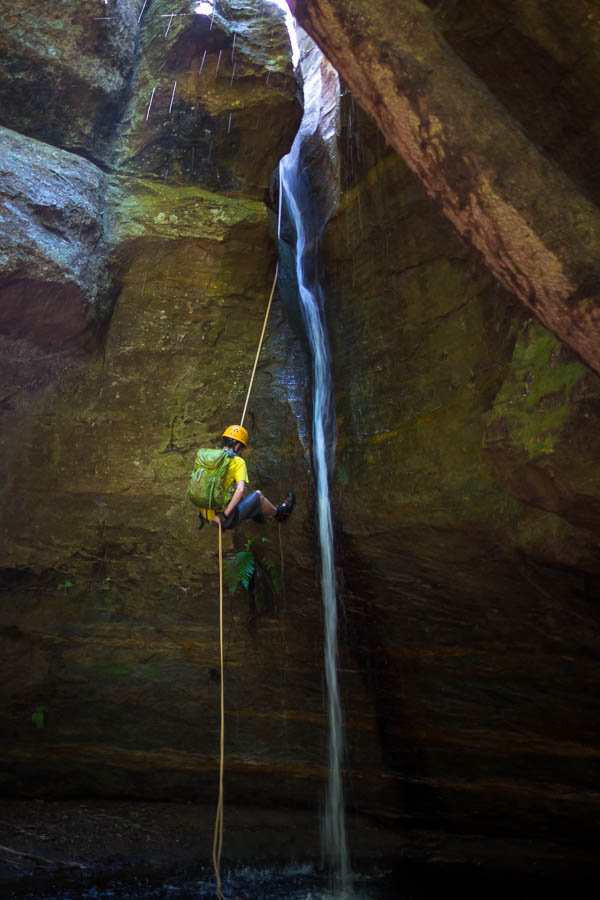 No vegetation in sight! 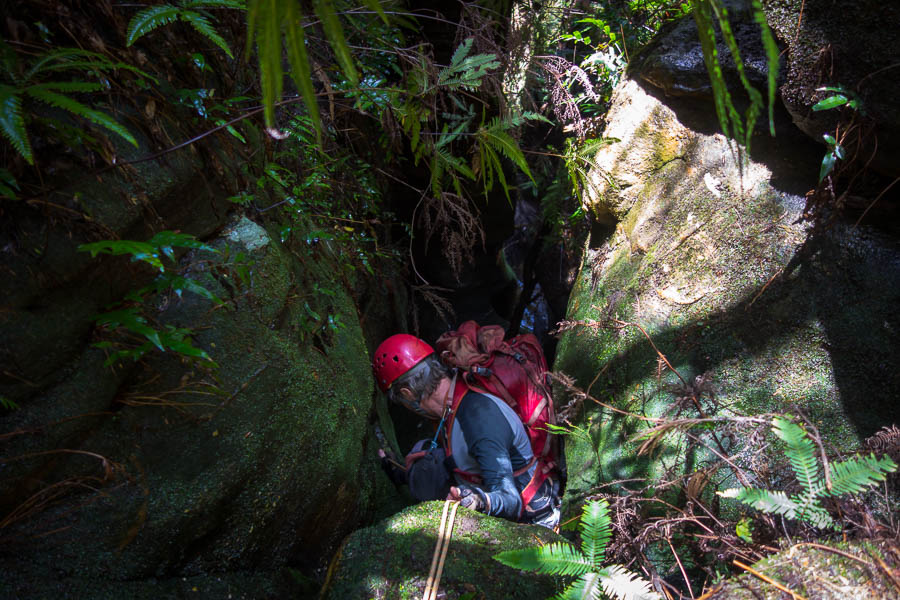 Smiffy checking out what’s below 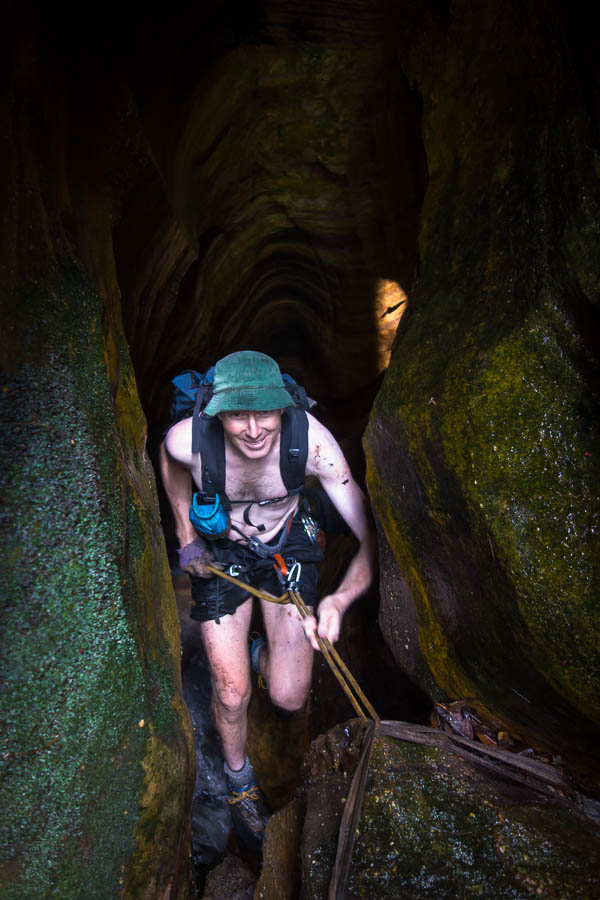 Tom descending into the unknown

When Smiffy & I first got to the top of this drop the pool came up over the slings, but with a bit of clearing of debris we dropped the water level in the pool by over a foot. 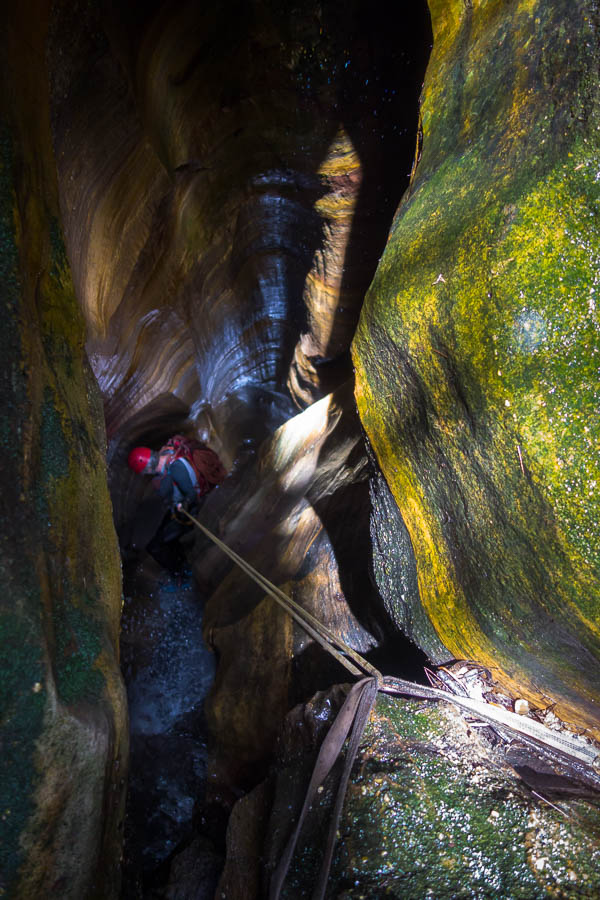 Smiffy on the same deep abseil 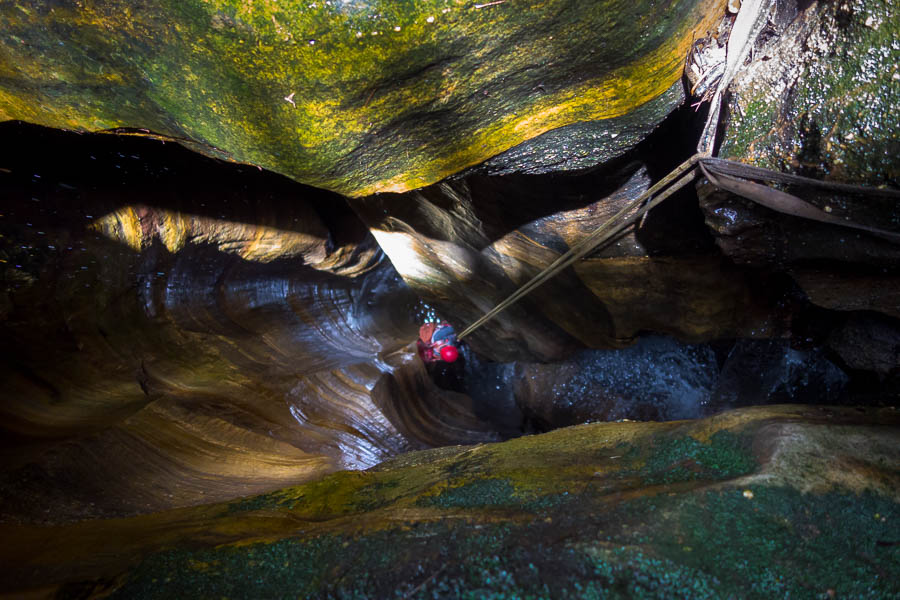 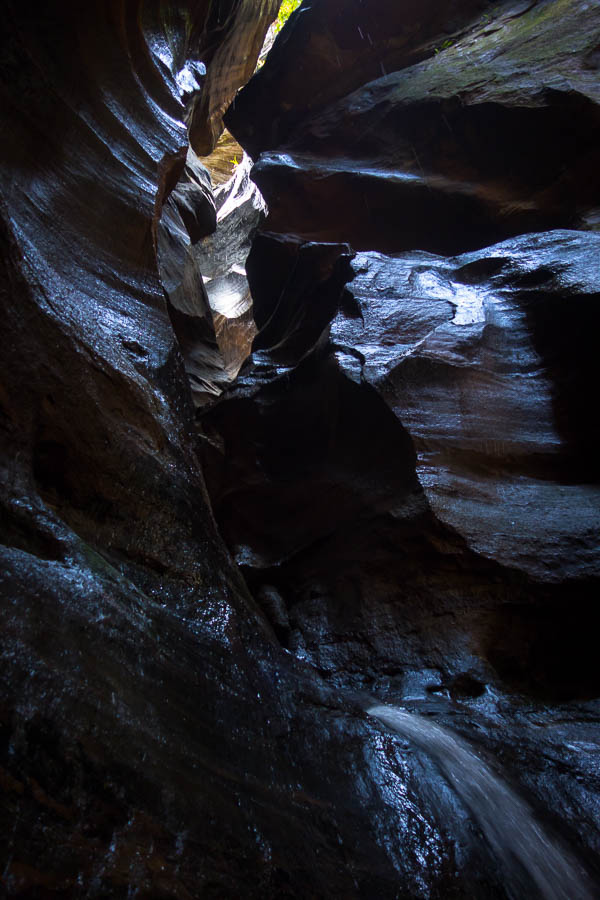 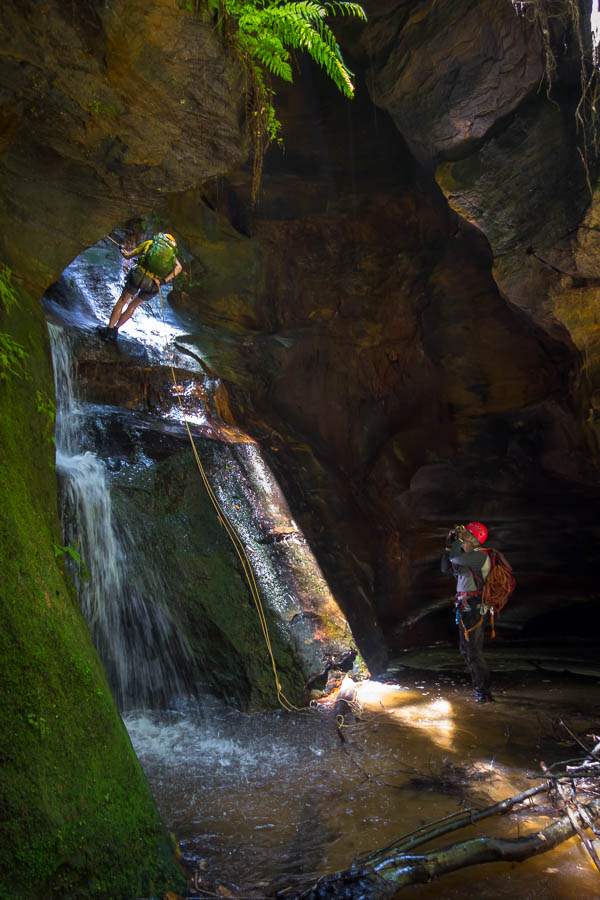 We were glad to find a nice sunny spot to have lunch in as it had been a relatively wet canyon. However, we had a long way to go to get back to our gear. 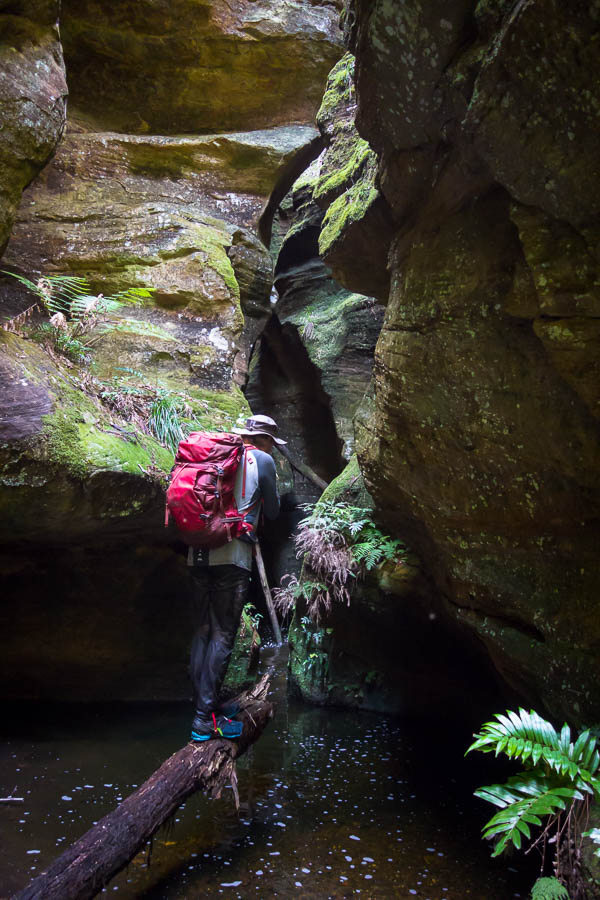 Checking out another canyon

After a couple of kilometres of creek-bashing we tried to force a pass onto the tops. Tom & I had found a pass some years earlier but we couldn’t remember where it was having not brought any notes with us. After a bit of exploring we couldn’t find a way up, so retreated back to the creek having lost half an hour. Several more kilometres of creek-bashing it was to be then. Fortunately, unlike our pre-Christmas trip, this creek did get easier the higher we went and we got back to our gear at 7pm…. still plenty of light, but Tom & I had ditched thoughts of heading back to the car that night. It was a much longer day than any of us had expected.

Despite how tired I was I didn’t sleep well, and we were all woken by an early morning thunderstorm rolling through at first light (5am). By 6am we were up and moving, Tom somewhat bemused since he figured we weren’t going anywhere till the storm had passed.

Once it passed we went our separate ways since our cars were parked in different directions. Tom & I were back at the car just before 9am, and having breakfast at a cafe in Lithgow by 10:30am. It was a hot and sunny day and there was a twinge of guilt at not being out in it – until another severe thunderstorm swept across the state in the late afternoon. La Niña is here for the summer it seems. 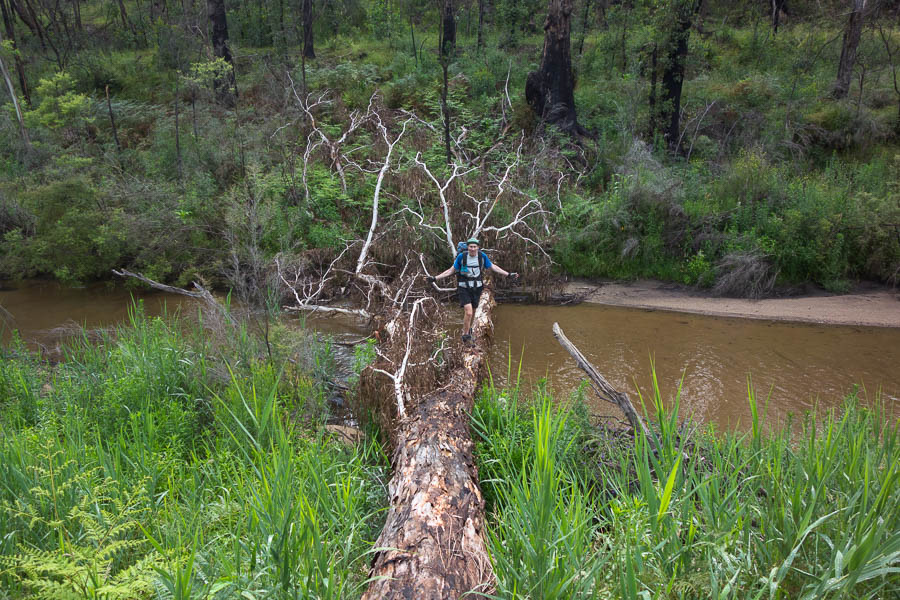