It’s been a long time between overnight walks. I’ve been surprised at the number of people who have said to me “but you’ve still been able to do your bushwalking during Covid haven’t you?” Well. There was that restriction on non-essential travel. Oh yeah, and that other restriction on no camping. So, if you think “my bushwalking” involves an hour on local bush tracks then yeah, sure, I’ve been able to do my bushwalking.

We went 2 months without using the car – a weekly visit to the supermarket was done on foot or bike, we were both working from home, and when we left the house for exercise (as permitted!) it was locally on foot, bike or pack-raft (or a combination of all 3). Now that NSW travel is permitted the options are still limited as many of our usual bushwalking haunts are closed due to the devastating bushfires and floods that occurred during summer.

On our first week of permitted travel/camping post-Covid we struggled to come up with an option for a 3-day walk because of the limitations of park closures. I didn’t have particular hopes for our intended route other than I was pretty sure we were unlikely to bump into other people – something I treasure and has been limited of late. This may sound ironic given I’ve been isolated at home with days at a time where the only person I spoke to was Tom. All our local bushtracks were well used during lockdown (which is a good thing), and I was searching for isolation in the bush, something I haven’t been experiencing locally.

So my heart was filled with joy as as we discovered sensational vistas, solitude and promising signs of regeneration after the fires on Wanganderry Tablelands. 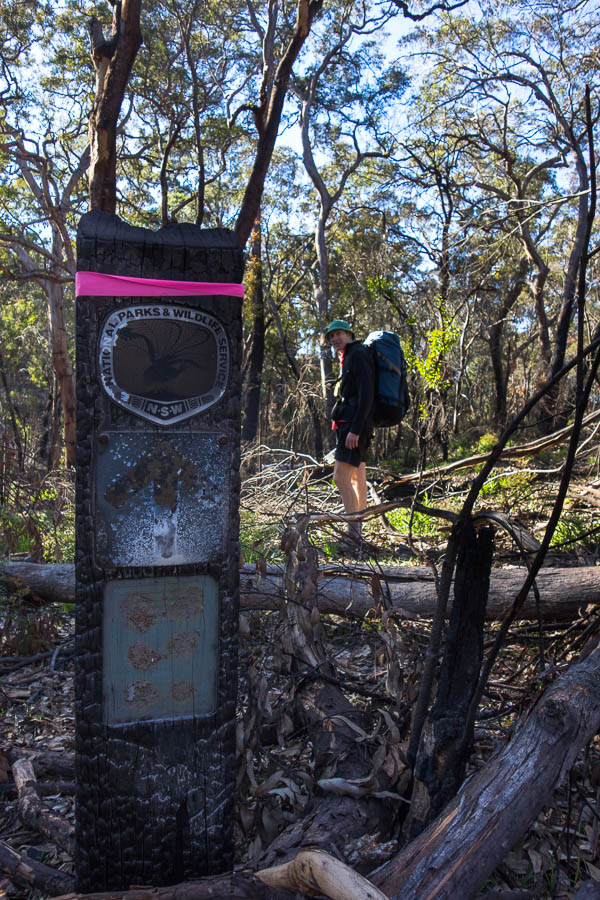 Some NPWS signs didn’t fare so well during the fires

The first day the weather came to the party. It was sunny, still, a brilliant temperature for bushwalking and I don’t think it could have been any better. After a couple of hours of pleasant enough bush tracks we emerged onto a rocky ridge reminiscent of the area near Point Cameron. The views stretched as far as the eye could see with familiar features of Mt Colong, the Blue Breaks and maybe even Kanangra Walls. 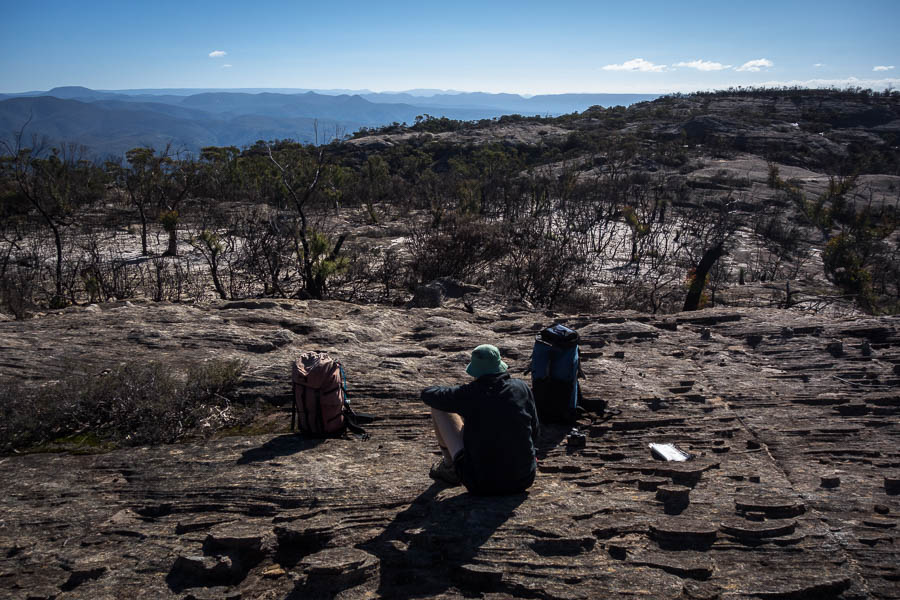 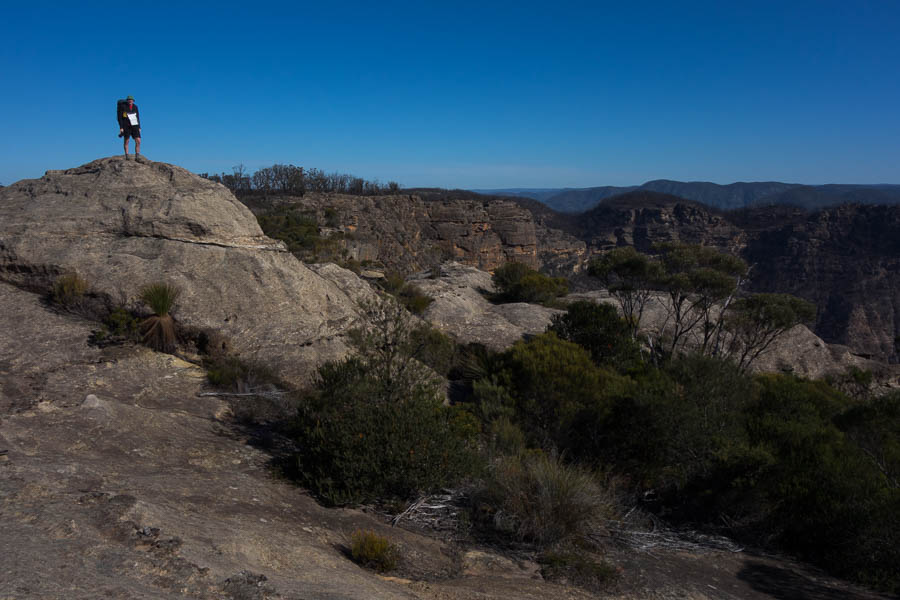 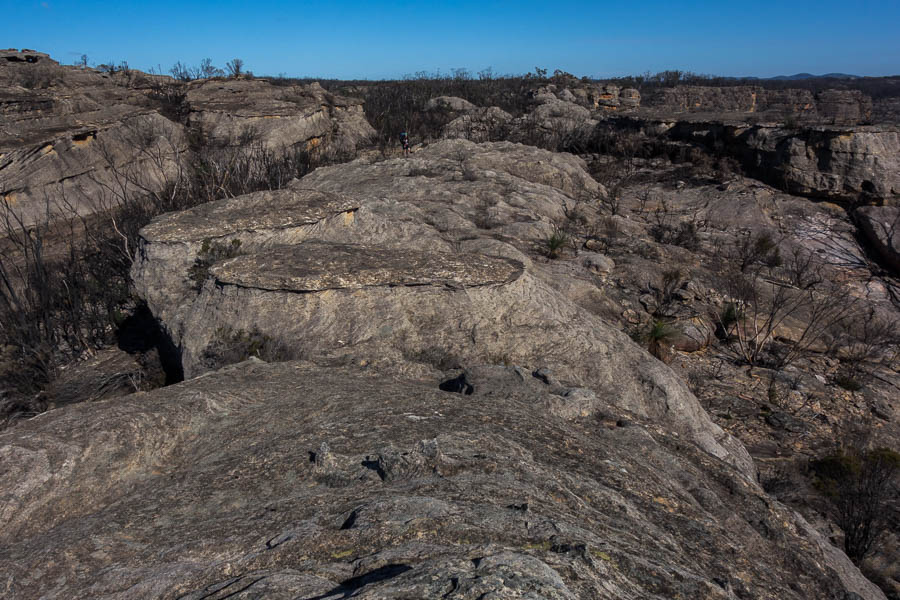 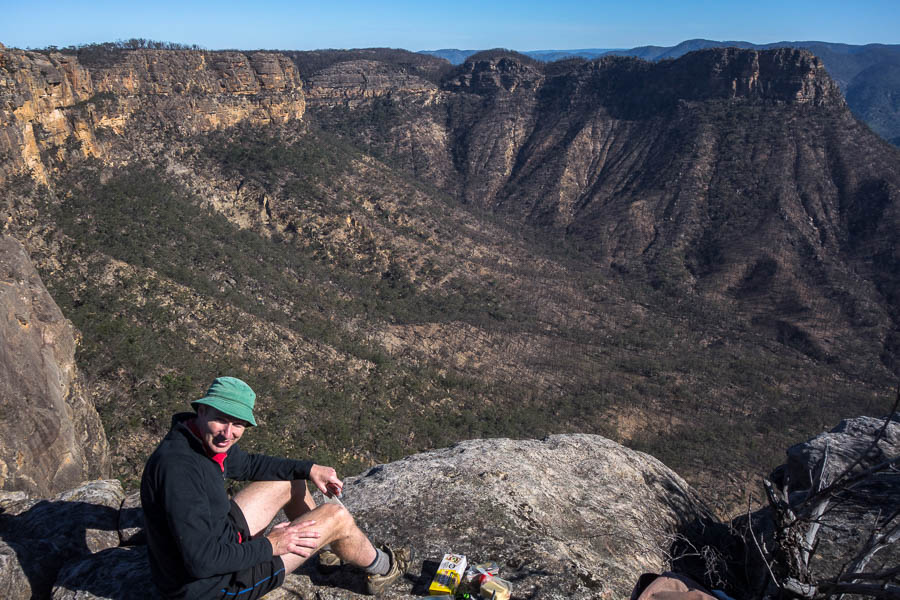 Lunch with a view of scorched Bonnum Pic

So pleasant was the walking and amazing the views that we lingered perhaps a little longer than we should have. Eventually I gave Tom the hurry up. We still had a few more kilometres to go before the spot Tom had picked out on the map as the campsite for the night. It was a good thing we got moving as we left the rocky platforms and made our way onto a flat featureless ridge we slowed down significantly. The scrub was never dreadful but even with the fire there were slow sections with numerous entangled burnt out trees. The first walk in almost 6 months with an overnight pack was also telling on us and we were very happy to get to ‘the spot’ at 4:30pm. The light was golden, so there was no thought of setting up camp, instead we dumped packs, retrieved cheese, port and cameras and settled in for nature’s show. 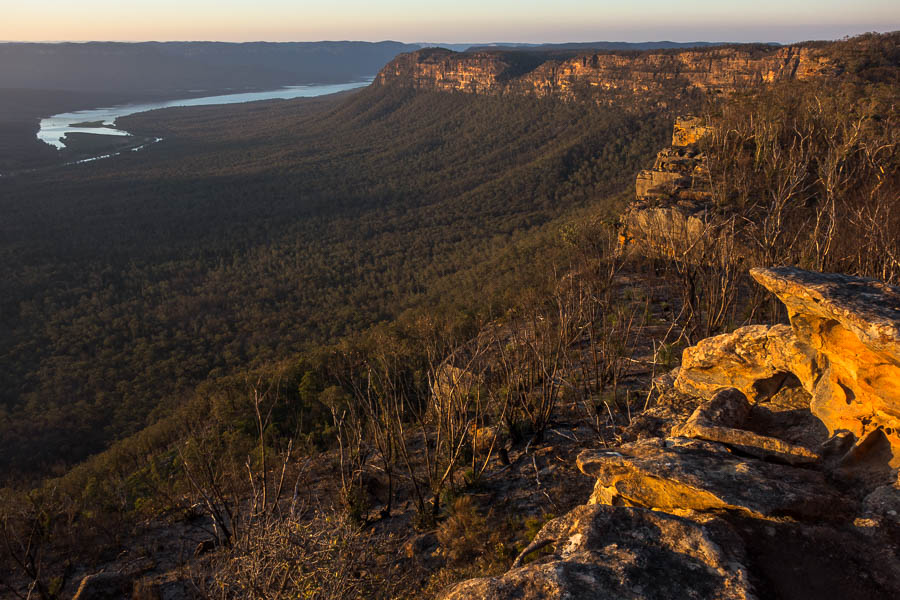 Happy hour with a view of Lake Burragorang 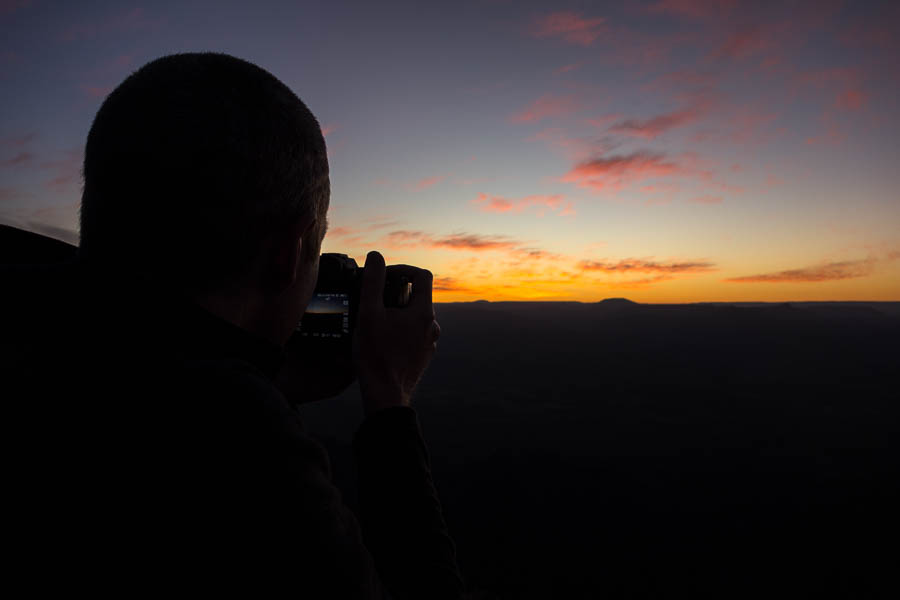 As we set up camp in the fading dusk we were treated to a spectacular moon rise. The full moon was fortunate as Tom discovered his head torch had no life in it. The stillness which we had enjoyed all day continued through the evening, capping off one of the best days I’ve had in the bush. 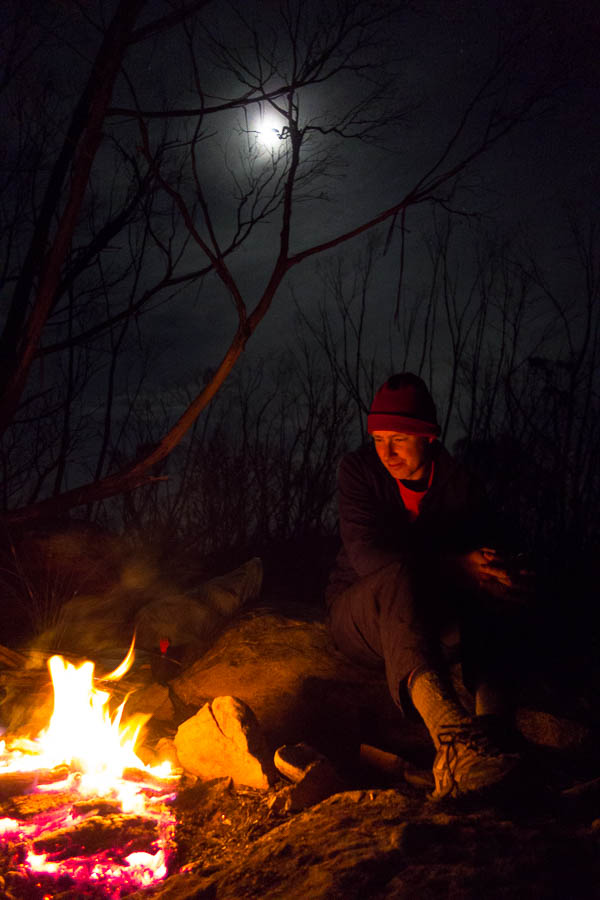 Full moon and a campfire

It was a perfect night’s sleep to cap off the perfect day. I don’t remember a thing between falling asleep and waking up 5 minutes before the alarm was due to go off. We were up early for sunrise, and coffee on the cliffs. 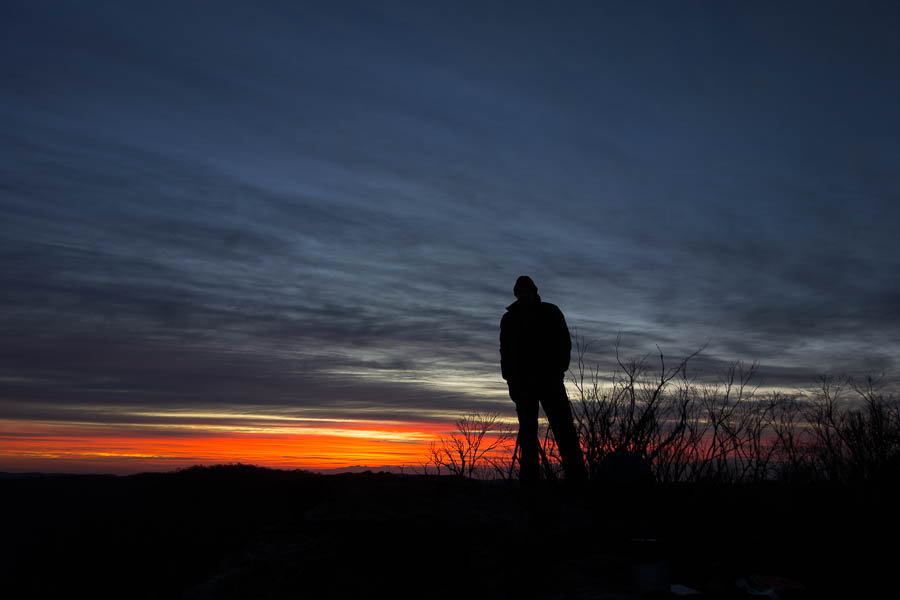 The previous evening we’d mulled over the options for day 2. Eventually settling on an option which maximised use of the daylight hours and our location. With significantly lighter daypacks we headed further along the ridge to see how far we could get before our turn around time. The going was much easier than the previous afternoon, mainly on cliff edges with constant views. 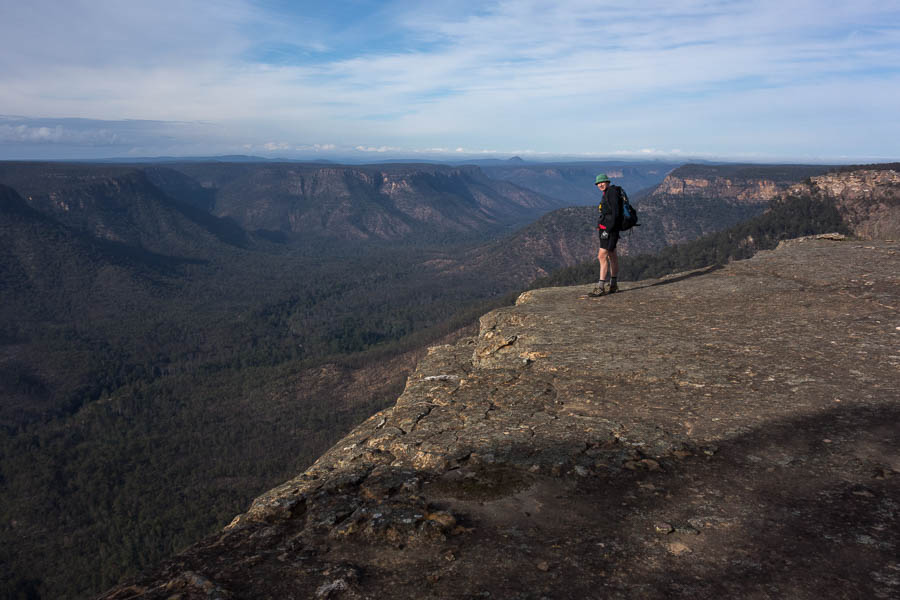 What a view! (Nattai Valley) 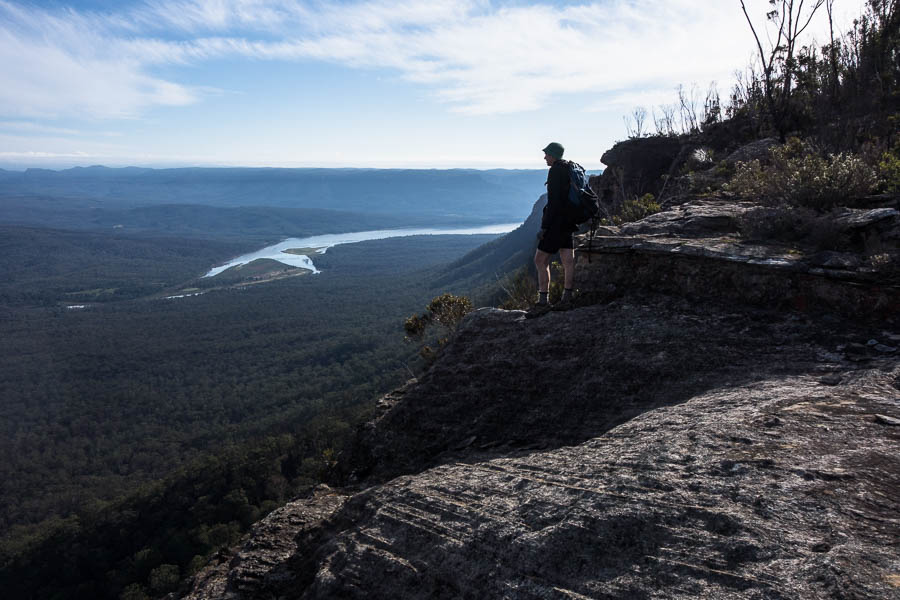 View from the other side of the ridge (Lake Burragorang)

We reluctantly turned-around after morning tea and headed back to camp for lunch. Friends were also in the area and we were hoping to meet up with them to camp for the night. There was a slight chance they might day trip out to where we’d camped. Neither of us gave them great odds on turning up, and so it wasn’t surprising there was no sign of them even after we’d had lunch and packed up. Our faith should have been stronger as we did bump into two of them not long after we set off. 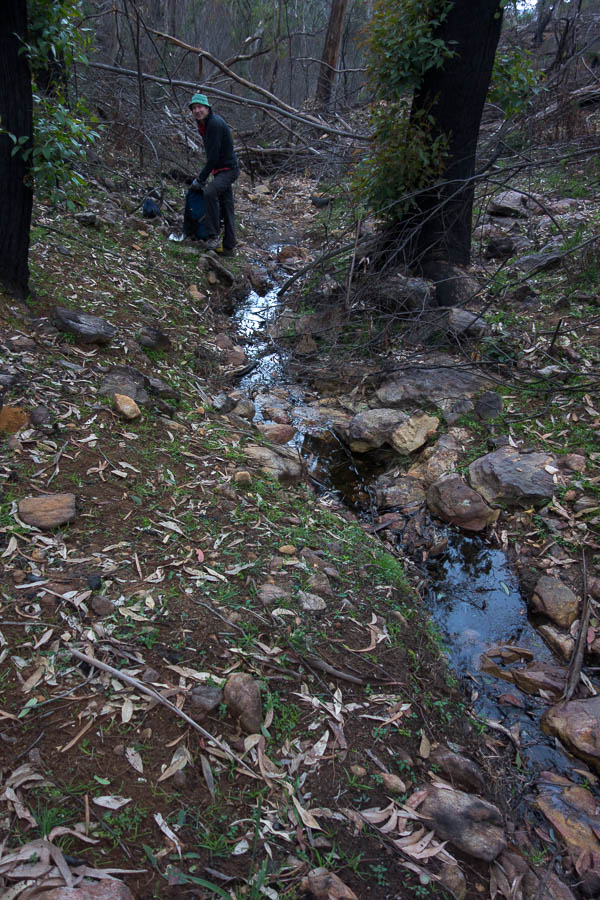 Thanks to the recent rains in the last couple of months there was a lot of water about, and we didn’t have to drop far down into the small creeks to find some when needed.

A few hours later we had no trouble locating the rest of our friends and quickly set about getting settled in so we could enjoy another sunset. The wind had come up and was bitingly cold but that seemed a small price to pay for the views. Toasted marshmallows and chestnuts finished off the evening, and we mostly made it to bushwalkers midnight. 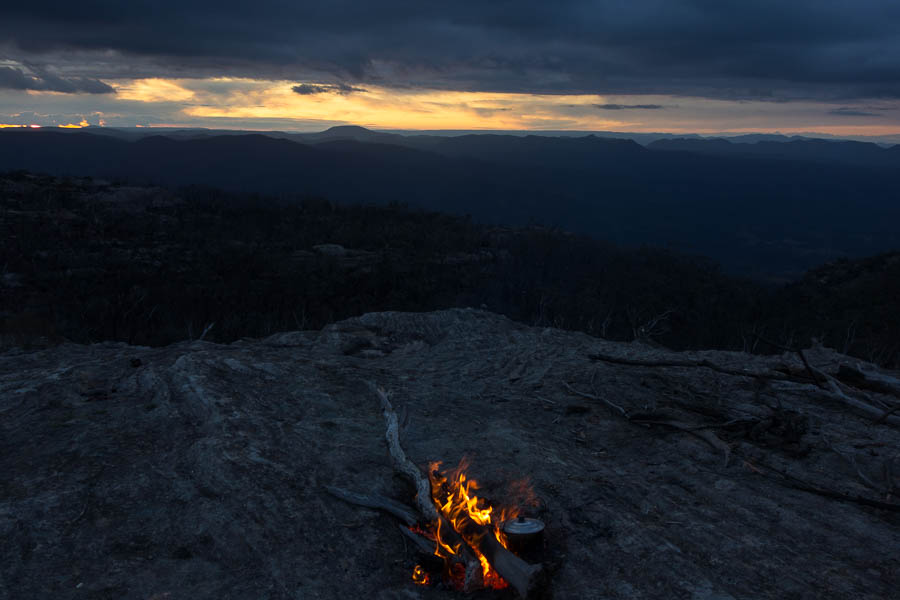 I’m not sure our friends were quite so happy we camped with them after another pre-dawn wake-up (and associated bag rustling) for sunrise viewing. 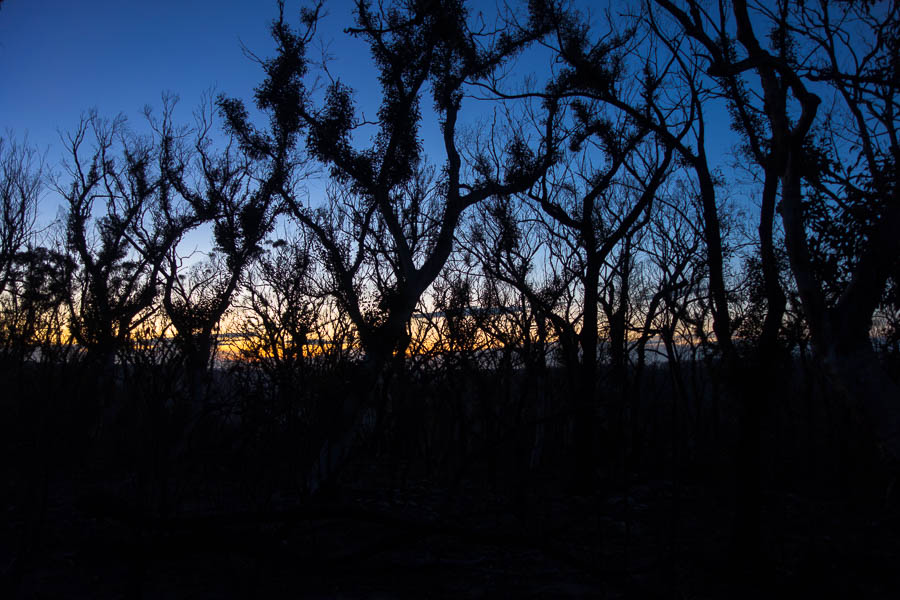 Despite the early wake-up breakfast was leisurely and we didn’t go our separate ways until 9:30am. 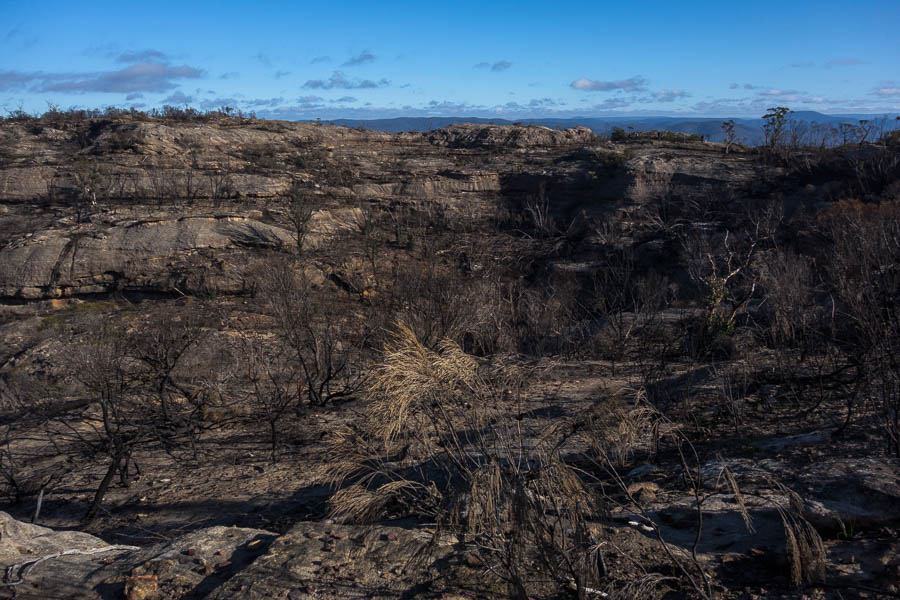 Burnt out ridge. (And if you look carefully you might see some humans) 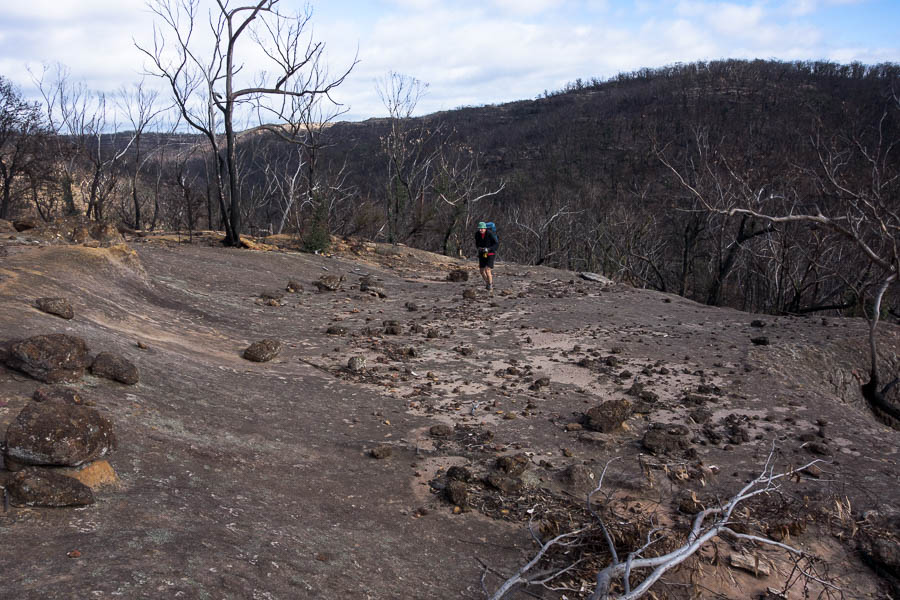 We took our time at morning tea… and at a lunch… which was a nice change from the previous two days where it had been a bit more go, go, go. The weather was more akin to the first day so it was a pleasure to sit in the still sunshine. 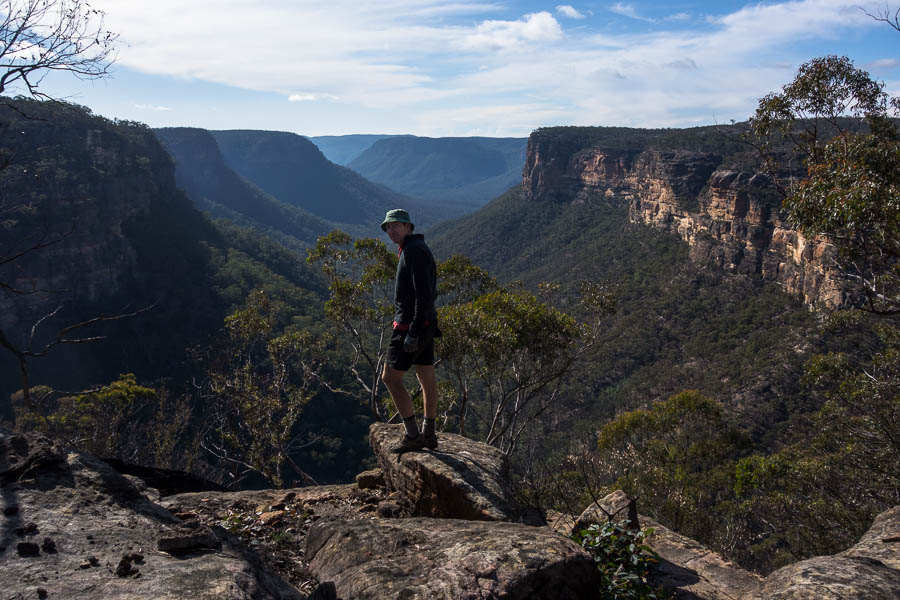 Eventually it was time to head towards the cars, enjoying all of the signs of recovery as we went. A wonderful long weekend in a new part of the bush. 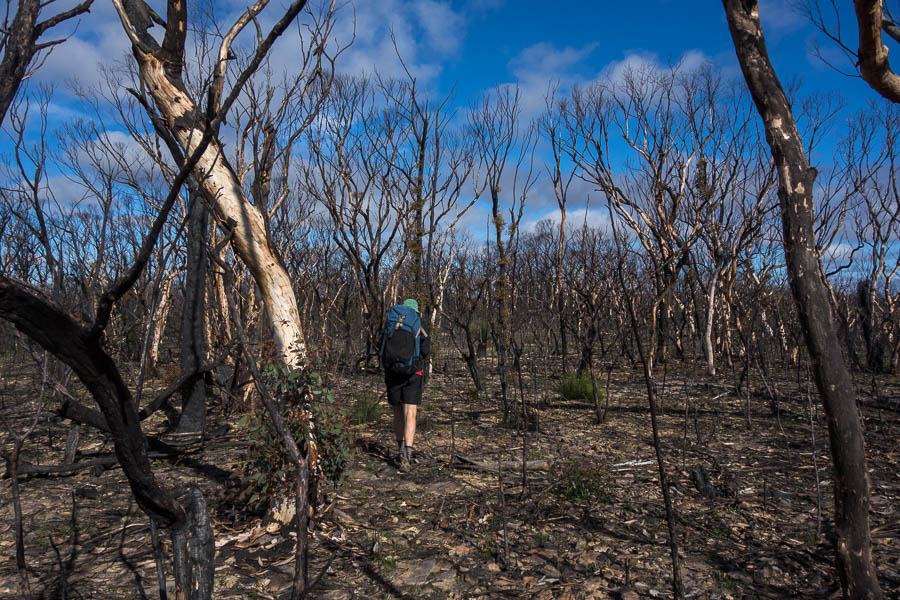 Heading back to the car 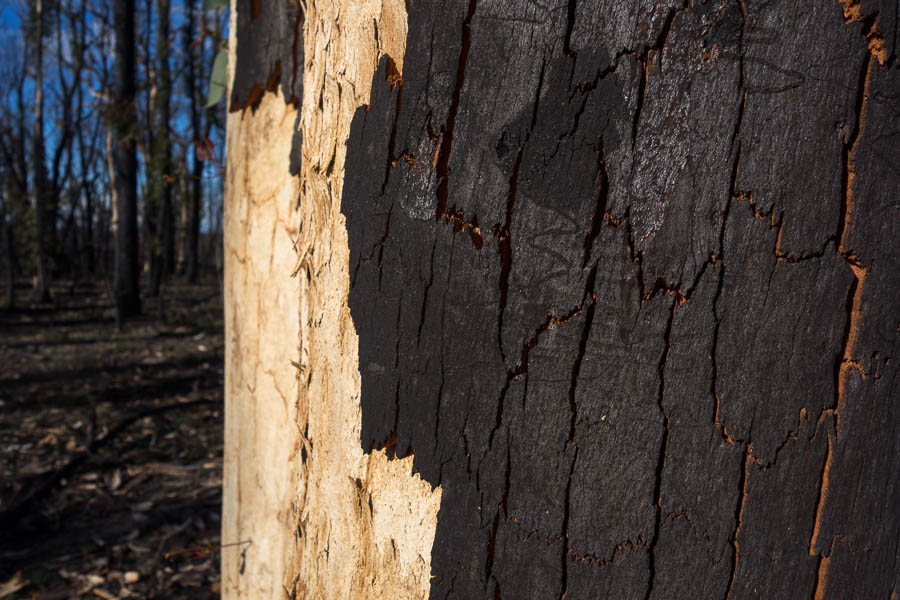