In September the NSW National Parks started burning. Tom optimistically thought we might be able to go canyoning in Wollemi after Christmas. As the weeks passed the burning spread I became convinced that was not going to be an option. In fact I didn’t think anywhere in NSW was going to be an option. Finally Tom agreed that it might be more sensible to extend our trip in NZ, since it seemed NZ was unlikely to be on fire. It might be flooded… but at least we wouldn’t be facing hazardous air quality. So a week before we were due to leave we re-booked our flights and found something to do that we could access (relatively) easily from Wellington and didn’t require Tom’s feet to have survived the Wangapeka Track. With limited time and little arm muscle we settled on 4 days of the Whanganui Journey Great “Walk”.

Boxing Day was an early start on the Intercity bus from Wellington to Taumarunui. We then sat round in Taumaranui for longer than planned (our lift forgot us)… fortunately we both had fat books with us! Eventually we made it to the Taumarunui Canoe Hire property where we were promptly processed. It was a very busy day with 60 people going on to the river the following day. 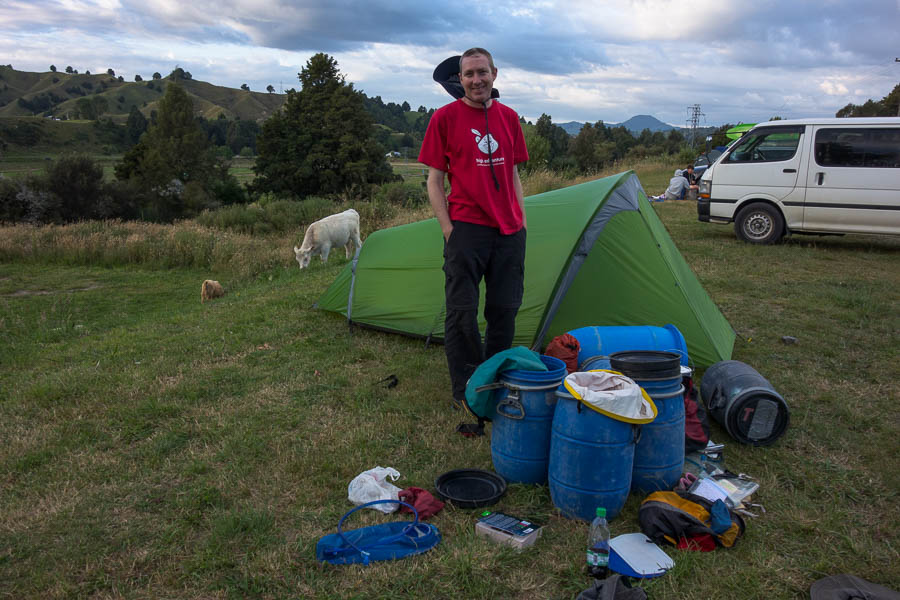 Camp the night before we start 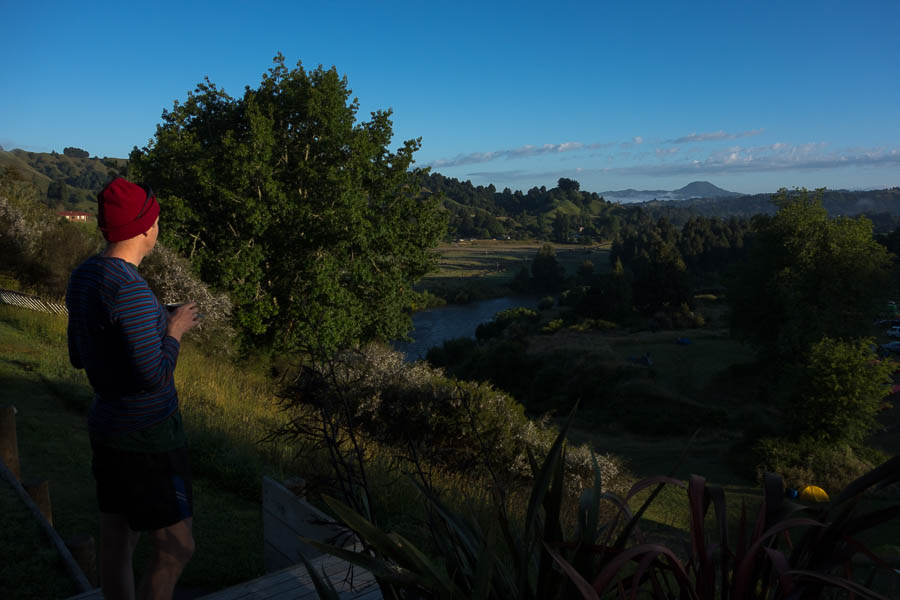 Beautiful views, with coffee, before the safety briefing

There were 8 others (another couple, and a group of 6) starting with us. We did our test paddle around and got the seal of approval so Tom & I were the first to leave. There was a reasonable rapid almost immediately and everyone else was watching… no pressure! 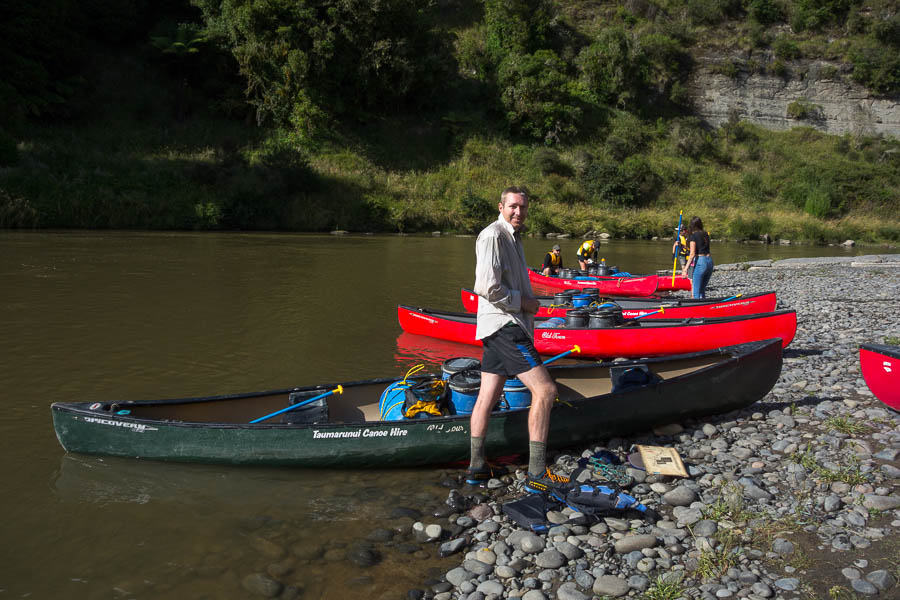 Successfully through the first (and probably most difficult one of the day) rapid we were carried down the river at a fair clip. Groups that had started the day before had been held back till 11am as the river was too high and we were still benefiting from some of that height. 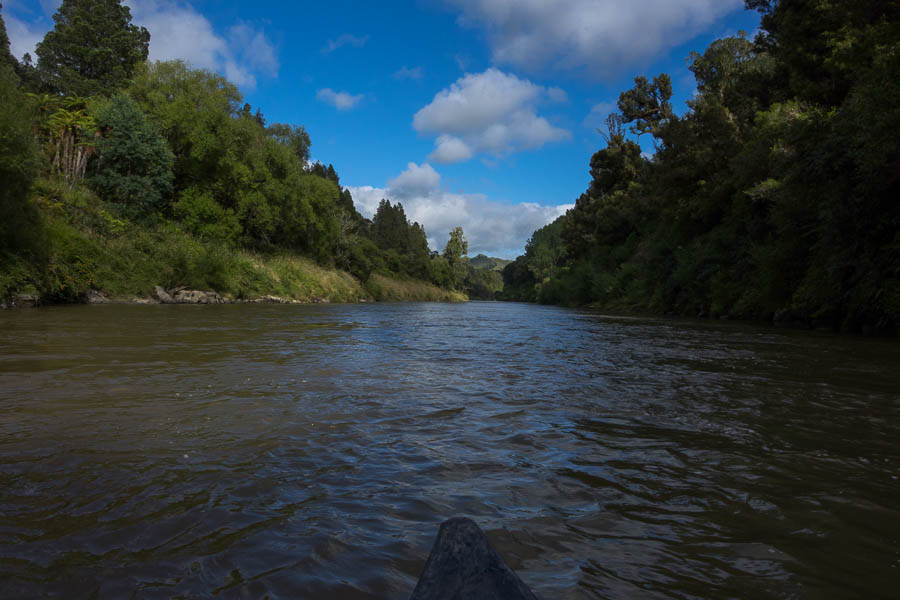 While there are campsites every couple of hours along the route, which make convenient stops, we decided to have lunch at Ohura Falls. There were waterfalls the whole way down the river, but they were generally of a vertical skinny nature. 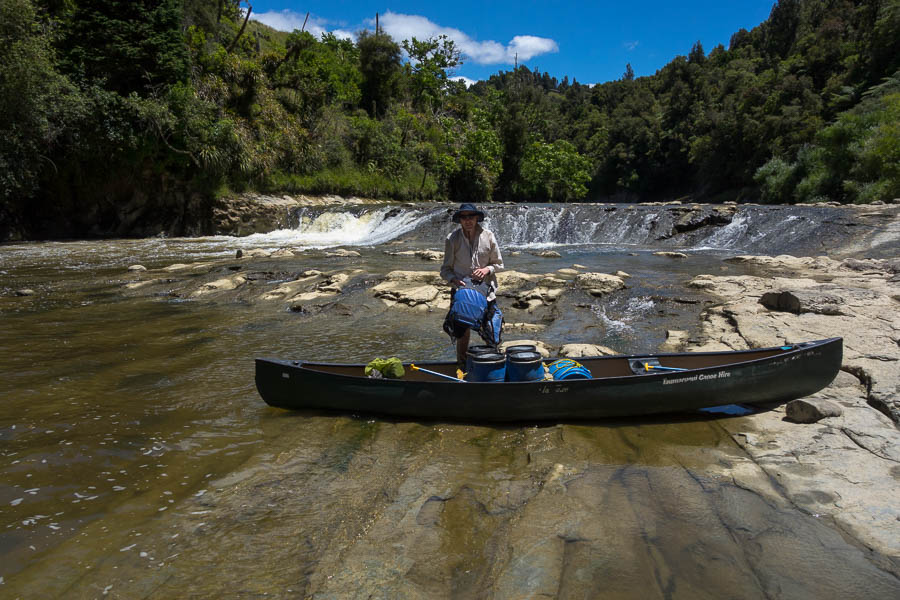 Lunch at Ohura Falls on Day 1 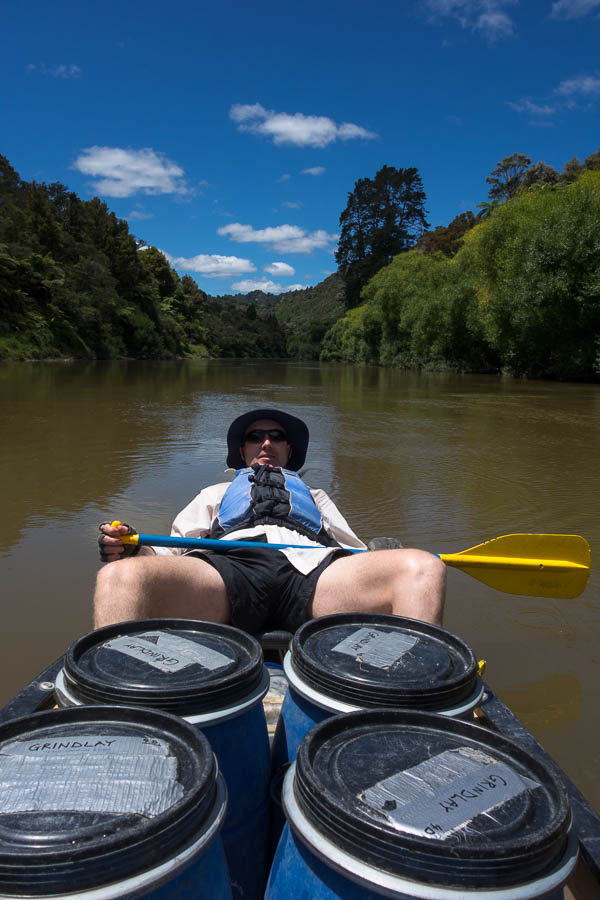 The campsite at Whakahoro is a 400m walk, with 50m vertical, from the canoe tie-up area. It doesn’t sound like much, but when you have to lug 5 barrels up I assure you it’s not much fun. Not surprising then we were ready for a swim after that! 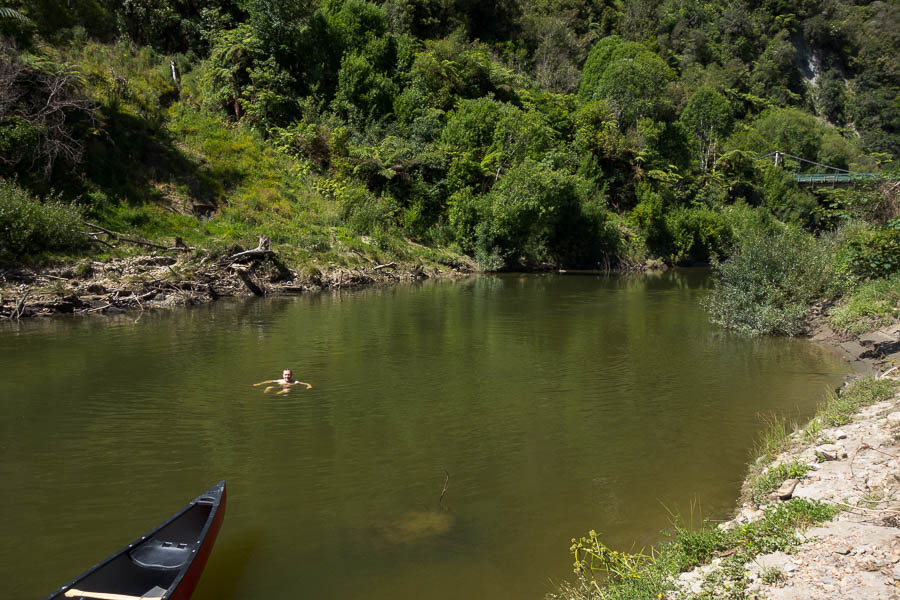 Swim below Whakahoro campsite at the end of Day 1

It was pretty windy at the campsite and our tent which had been saturated from condensation the night before was soon dry. There were a few Te Araroa walkers who were starting on the river the following day so we heard a bit about their experiences on the trail that evening. 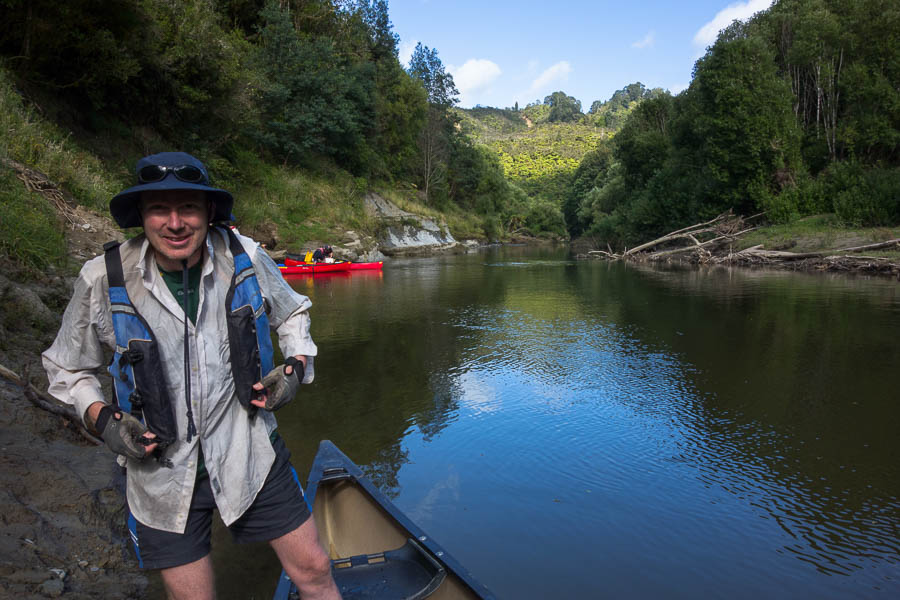 Getting ready to go on Day 2

As we’d left our bookings till fairly late in the piece we hadn’t been able to stay at the ‘recommended’ campsite on night 2. Instead of John Coull we were headed for Ohaurora, two hours earlier. Subsequently we weren’t in any particular hurry on day 2. Unfortunately there was a bit of headwind and we had to work pretty hard rather than just drifting with the river. We had a stop early on to explore one of the many side creeks, which turned out to be a reasonable canyon. 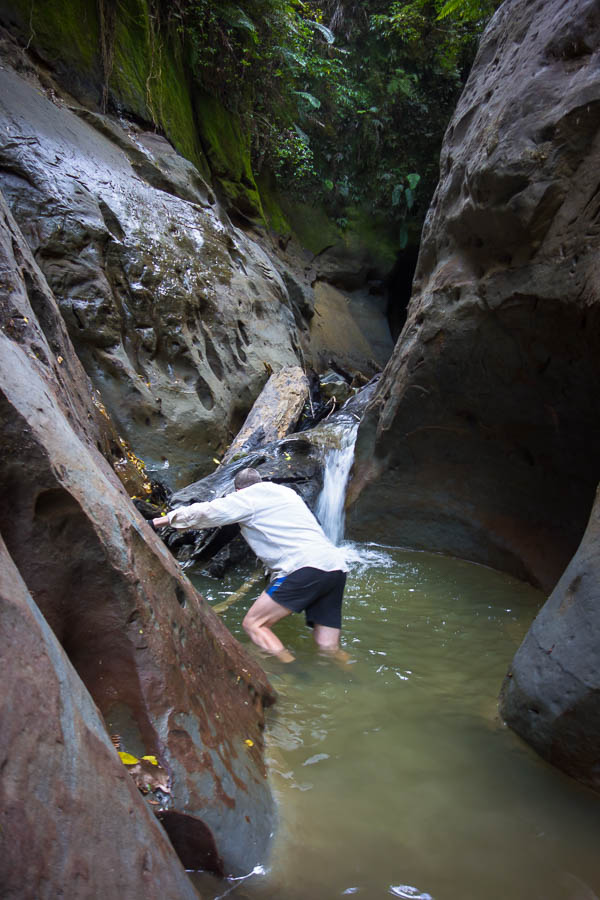 Oh look we found a canyon! 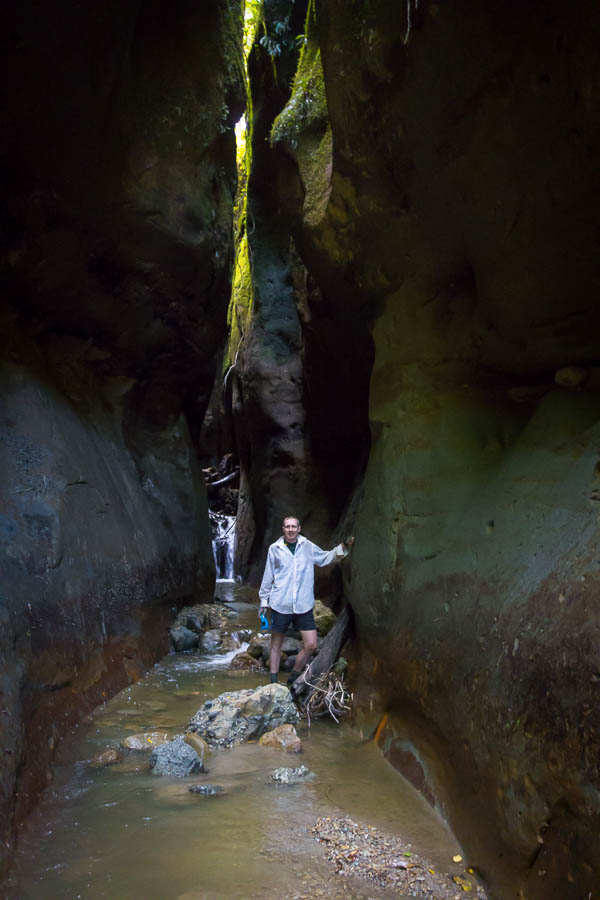 The man in his element 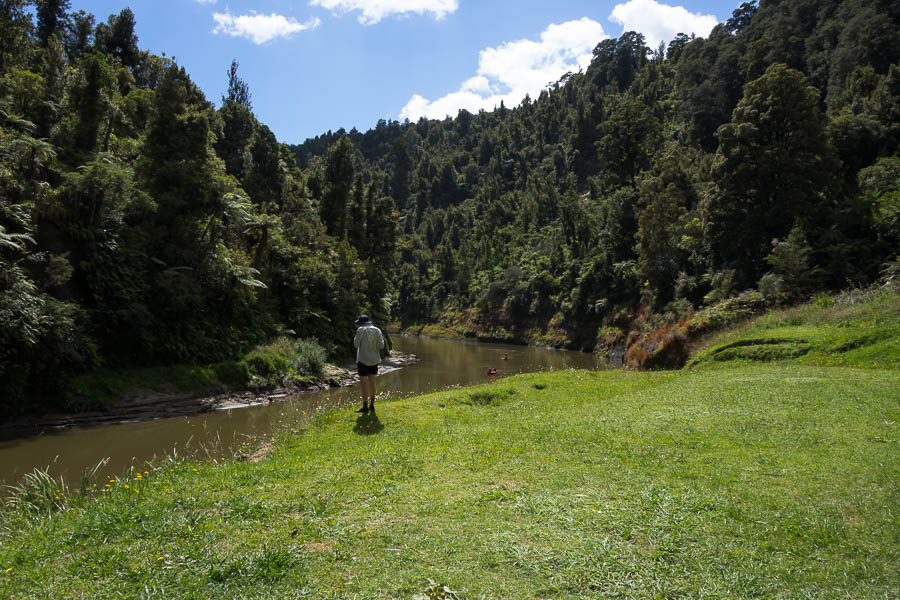 My willingness to stop for further canyon exploration was muted with the effort with the headwind. I was quite happy just to get to camp – the first there – at 2:30pm and not have to paddle any more. Since we were first we got the choice of the campsites – a lovely spot with river views slightly removed from the main grassy area. The next couple arrived about an hour later, as they were choosing their spot, I realised it was Bruce who I had played Ultimate with back in 2001. Small world indeed! Though I would have been disappointed if we hadn’t bumped into someone we knew on the trip – these sorts of things always seem to happen. 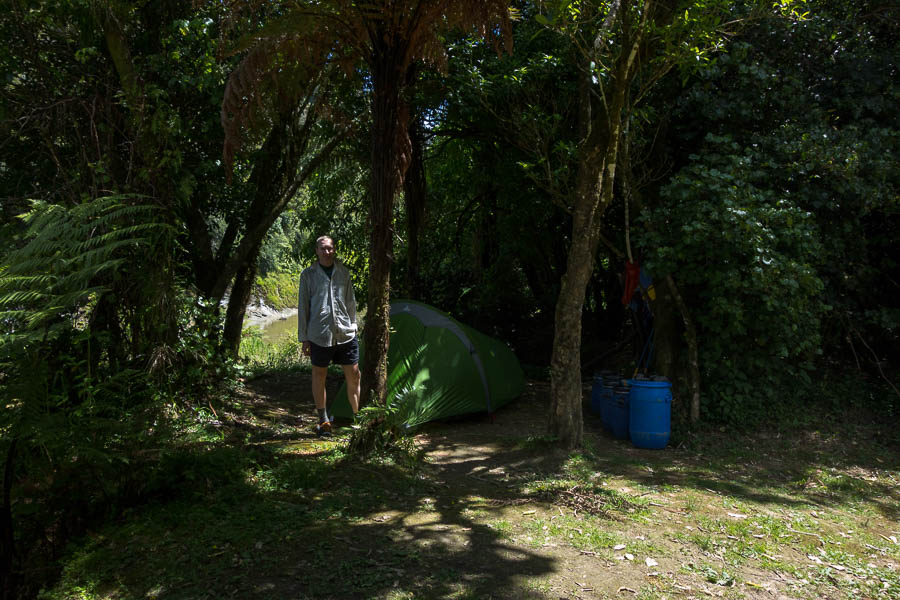 With our early camp on day 2 we had a long day 3. We got up at 5:30am and were paddling by 7am. When we arrived at John Coull there were groups who hadn’t left yet – that was even with a couple of stops for canyon exploration. 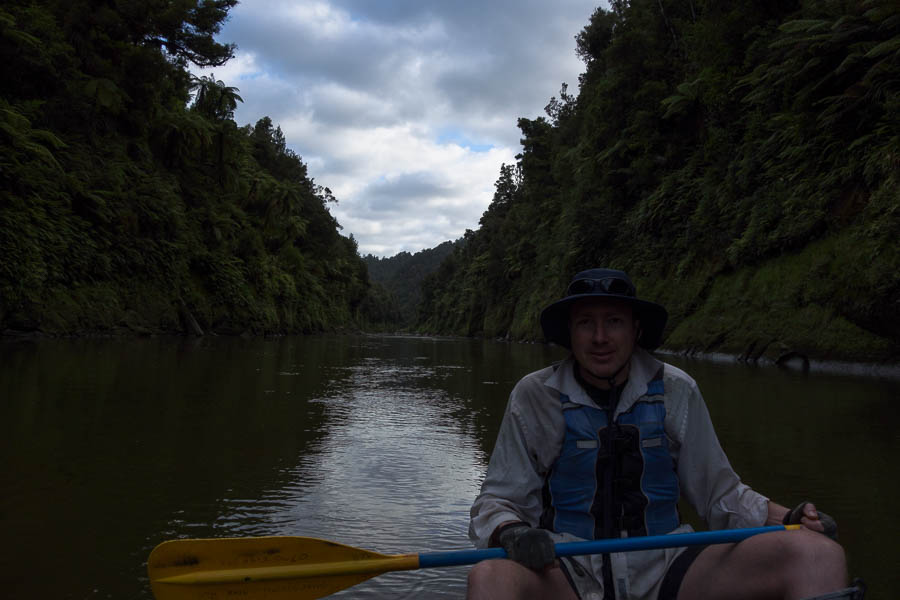 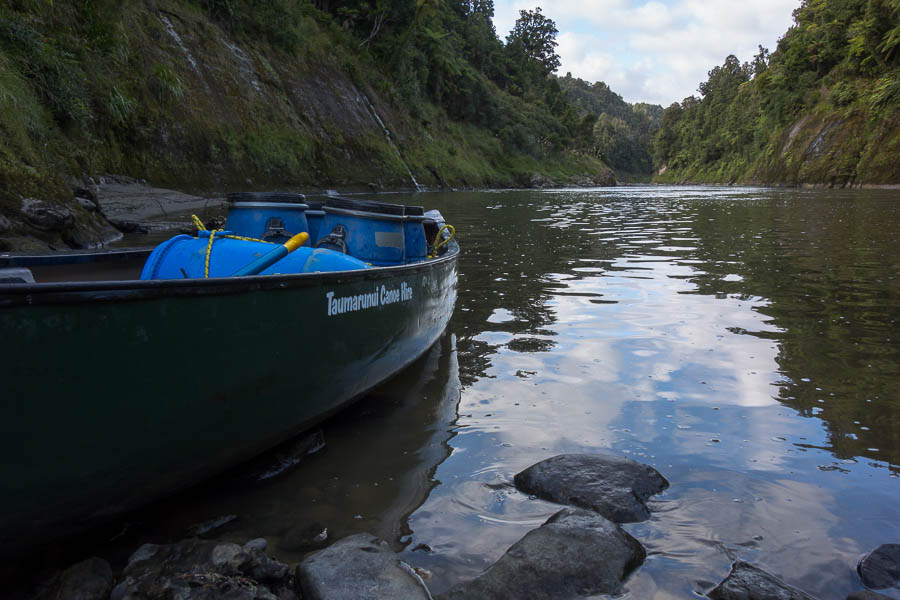 Pull off for more canyon exploration 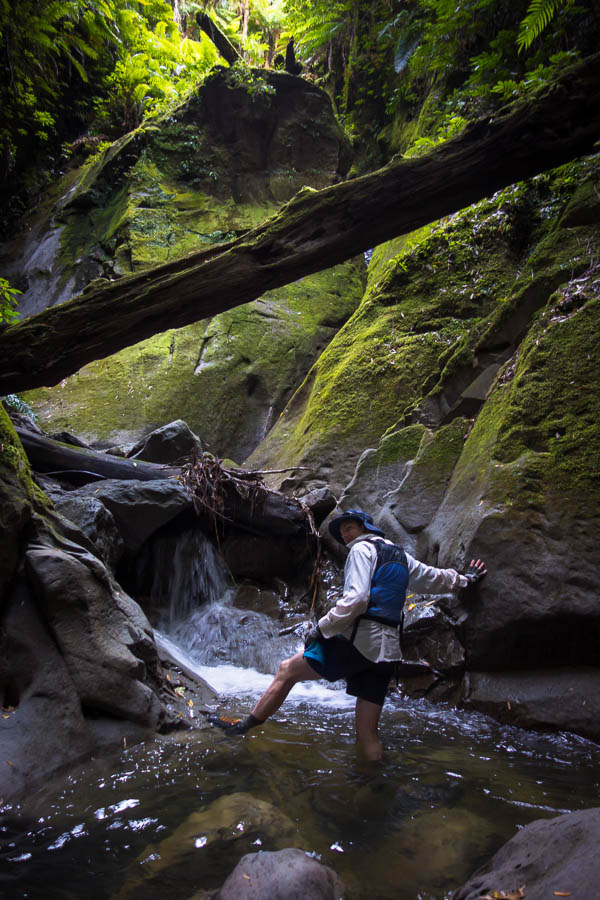 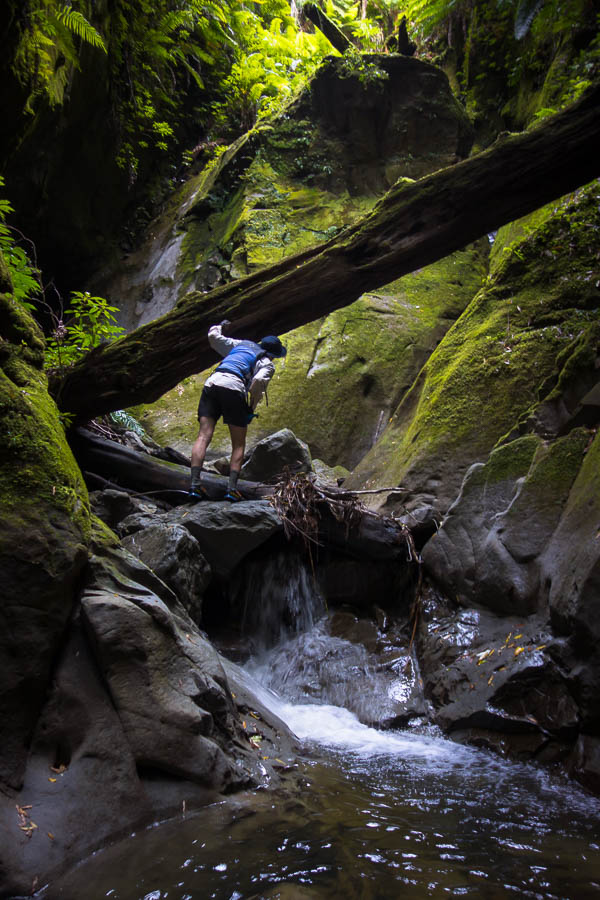 What is up here?

Unfortunately we left John Coull just ahead of the group we termed the “flotilla” since there were 16 of them (8 canoes). These arrived at Mangawaiiti just after we did for morning tea. We got away before them but felt compelled to paddle a bit harder than we might of (no wind today) to keep separated from them. 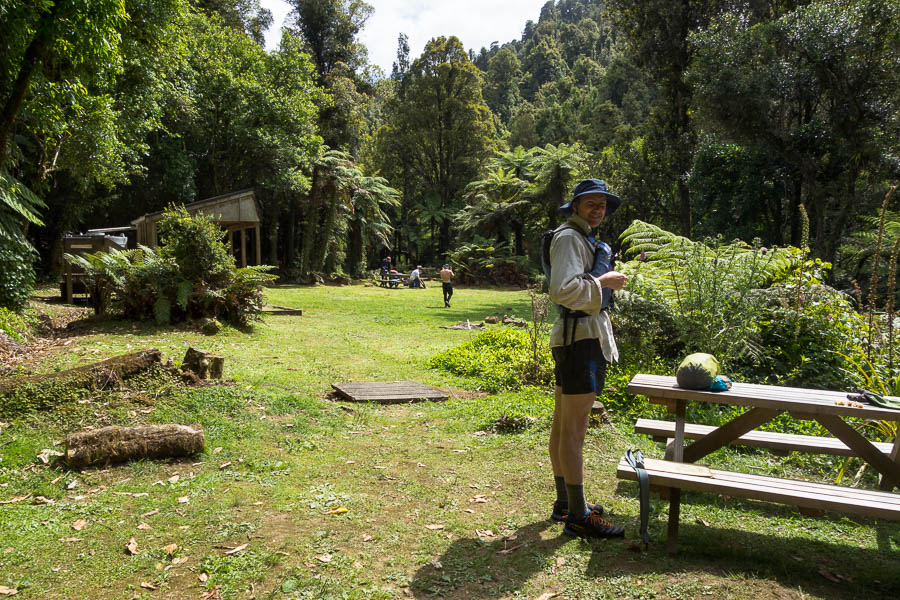 Fortunately I’d just managed to retrieve lunch from our barrel at Mangapurua before the canoe got bumped out of the way by the arrival of the flotilla. We headed up the hill on the 40 minute walk to the Bridge to Nowhere. 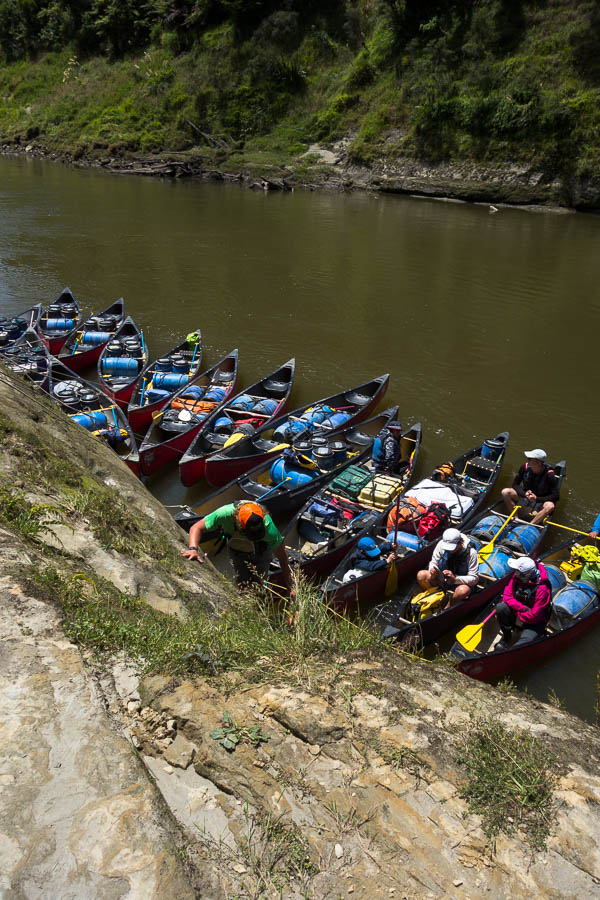 We seemed to have timed things fairly well. Despite seeing hoards of people on the track by the time we got to the Bridge we had it almost to ourselves. 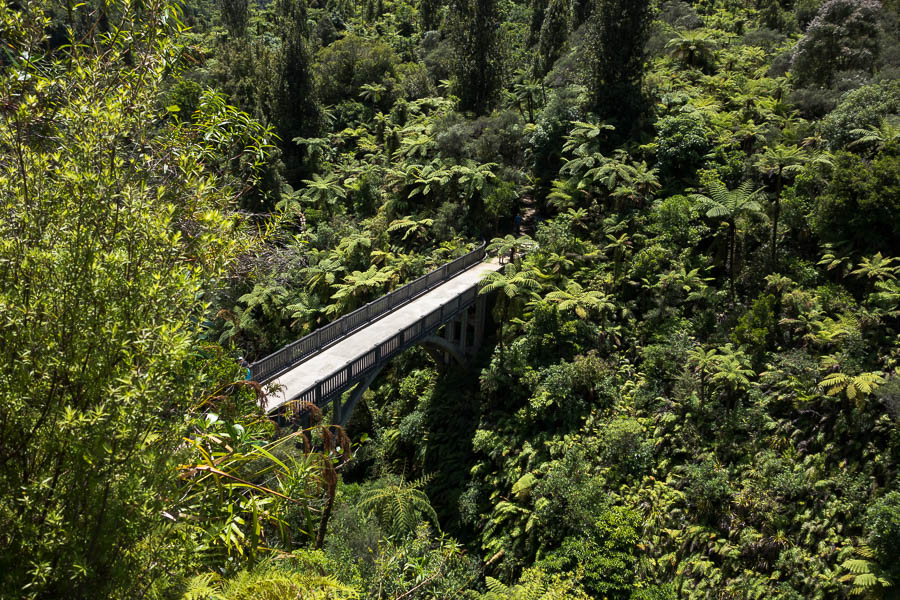 I’m on a bridge to nowhere….

We stopped for more canyon exploration – the wind and jet boats were causing a bit of chop so we decided the boat couldn’t be left by itself. Tom went off exploring. I wasn’t that keen but he insisted it was worth it. I got to a section where I needed both hands and was umming and aahing about pushing on, but Tom was waving at me to keep going. So abandoning the camera I did. Just as well – it was the most impressive canyon of the trip. 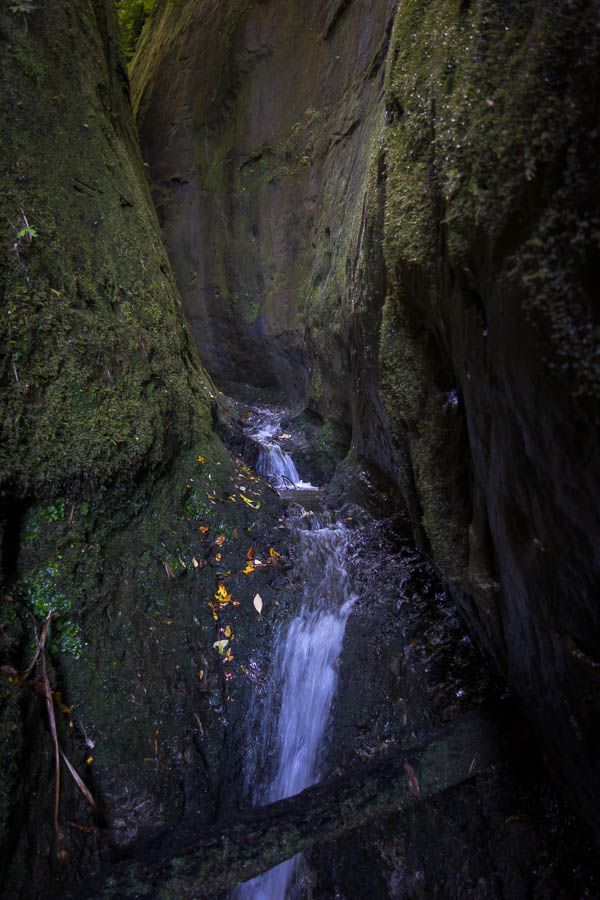 It had been a long day, with the canyon side-trips, the walk to the Bridge to Nowhere and several hours of paddling, we didn’t get to camp till 5pm (from a 7am start). The campsite at Ramanui was busy, and I was very glad to have the owner drive our barrels up to the site on his quad bike. The flotilla arrived not long afterwards and we ended up camped in the midst of them. However, despite the crowds it was a very scenic spot and I enjoyed sitting on the grass eating cheese and biccies and finishing our port. 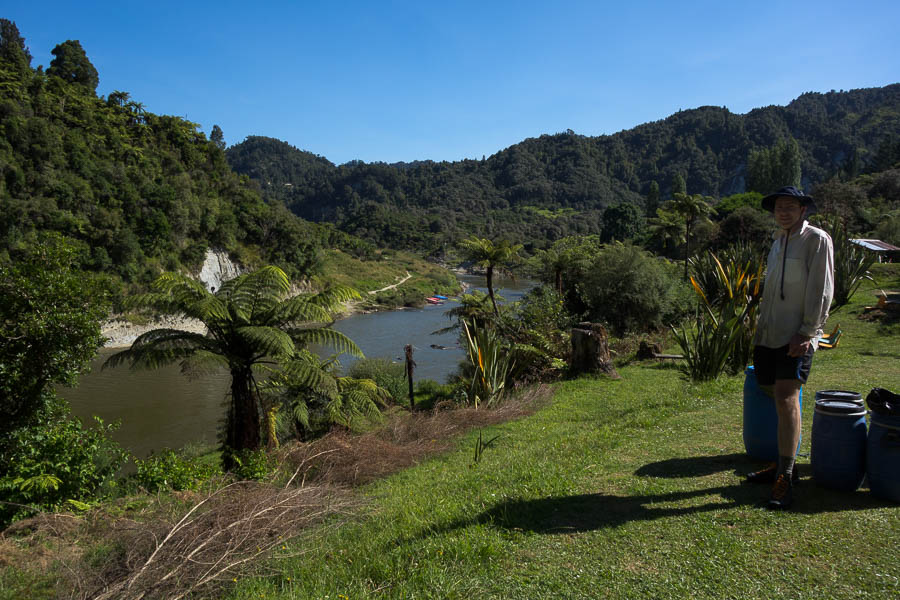 The forecast rain came overnight, but we got up at 5:30am again despite the drizzle. Thinking we’d drag our gear over to the camp kitchen to avoid disturbing others we were somewhat surprised to find bodies on the floor in the kitchen, and sleeping on the covered picnic tables! I felt less bad about disturbing them… Though turned out the people on the floor in the kitchen where there because the tent they’d hired had the wrong fly with it. It was substantially smaller than the tent which was obviously no good when the rain started. I think the company they hired from was going to be getting some frank feedback! 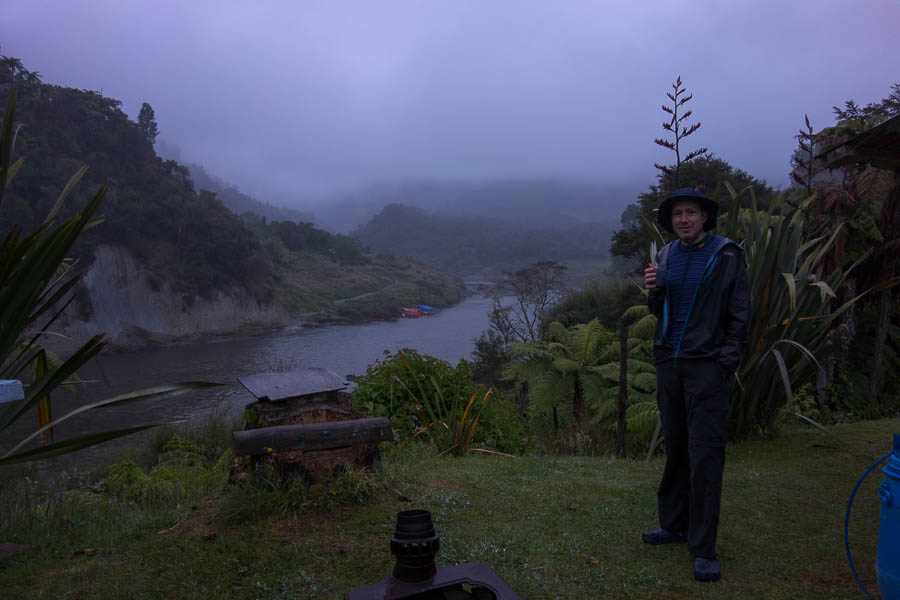 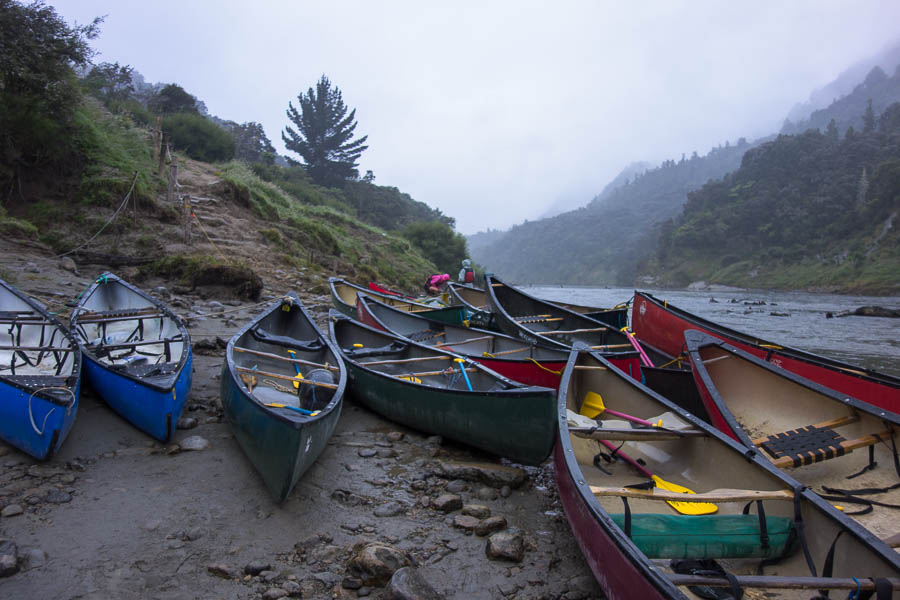 About to start off on our last day 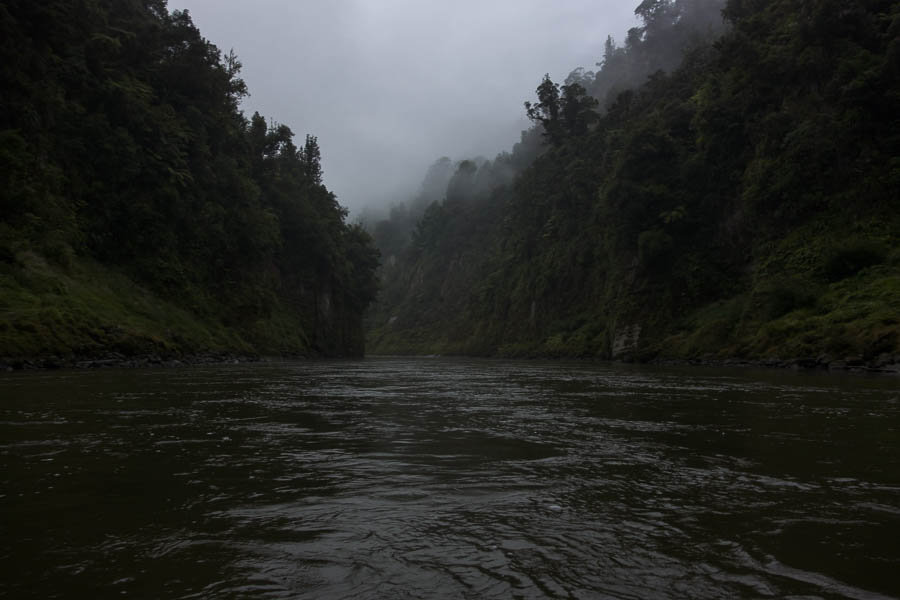 Gloomy, wet start to the day

The wet weather burnt off after a couple of hours, in time for us to hit the trickiest rapids of our 4 days. The Autapu rapid is apparently known as “50/50” – the odds of staying in your canoe. We took on a fair bit of water but stayed upright. Of course we don’t have any photos of the rapids since there was no time for waving a camera as we were going down them! 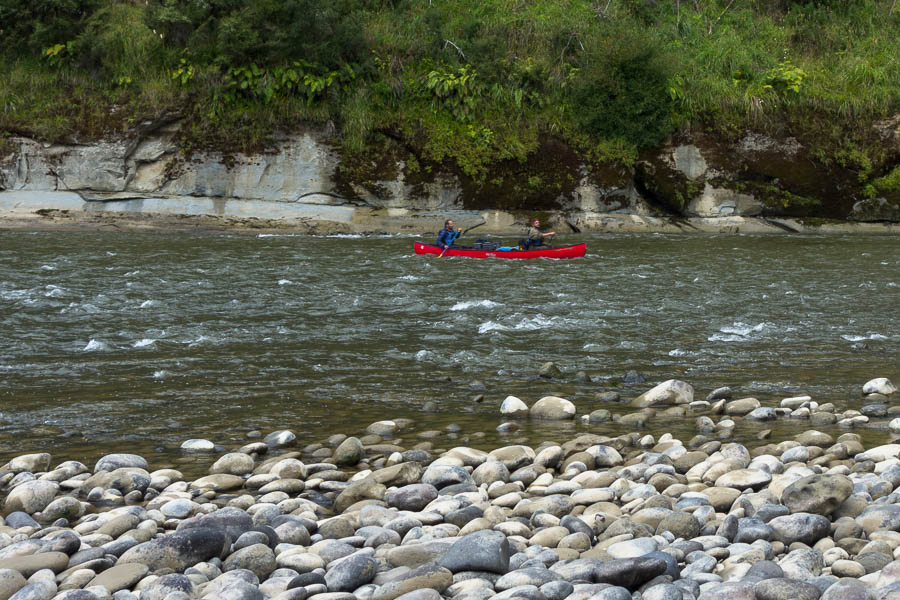 Te Araroa walkers at the end of one of the rapids 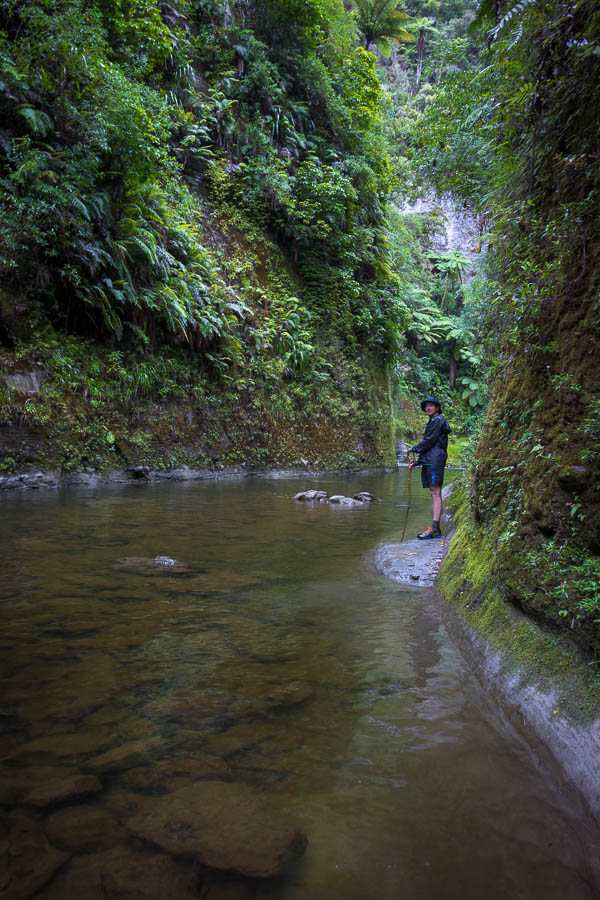 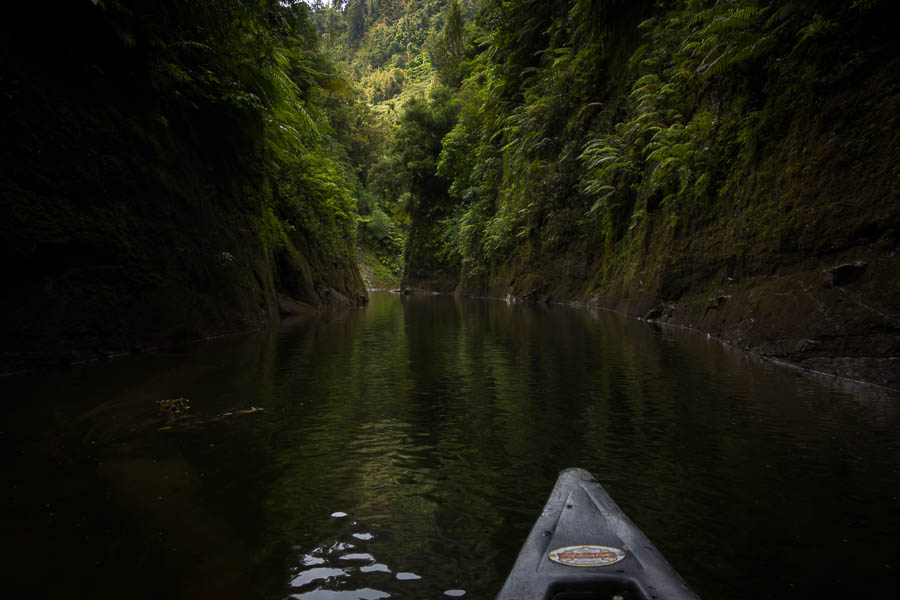 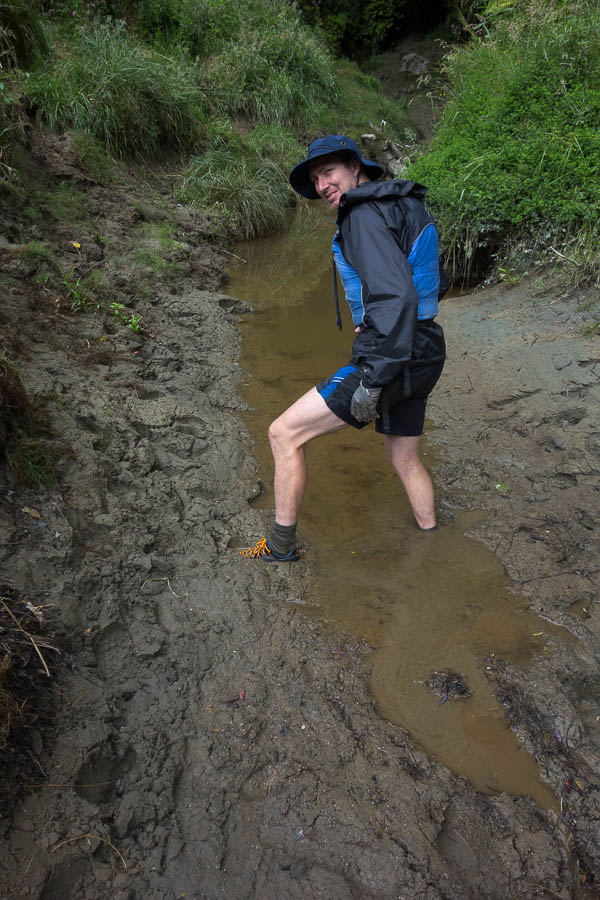 Tom off to see some caves

At the end at 12:30 it was time for action. Tent was set to dry, ate our emergency noodles for lunch, and a full re-pack from barrels into packs as we were getting dropped off in Raetihi to get the bus back to Wellington. A great 4 days – though my lazy left shoulder is still complaining about all the work it had to do several days later.