Another Saturday morning driving South out of Sydney with the rain pouring down. At least this week I was fairly confident we would drive out of it into a clearing weather pattern. Things were looking good when we met the rest of the group at Sutton Forest as 1) we hadn’t run out of petrol on the way and 2) it wasn’t raining. We had a pretty efficient rearrangement and headed off in two cars to the start of the walk. Less promising when the rain started again, and perhaps a little nervous when we started discussing which road we were taking in and Alex says “oh not that one! I’m sure when we were driving it a couple of months ago Paul & I definitely agreed it would be dreadful in the rain”. Anyway we made it through the various puddles and pools, only slid around on a couple of clay sections and both cars were still intact when we got to the end of the road. Unfortunately it was still raining. Tom had been forecasting a slippery track down to the Shoalhaven but it wasn’t too bad, and the rain stopped part way down and the fog cleared for some views. We had morning tea at the river and hunted around for a crossing point. 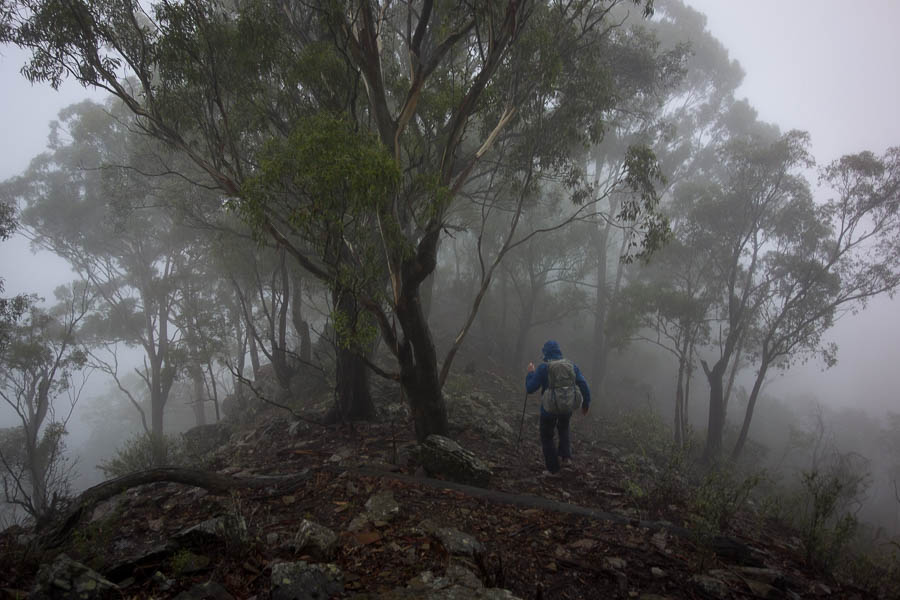 A damp and foggy descent to the Shoalhaven River

We crossed without any issues near the start of the Back Bender Walking Track (as marked on the topo map). 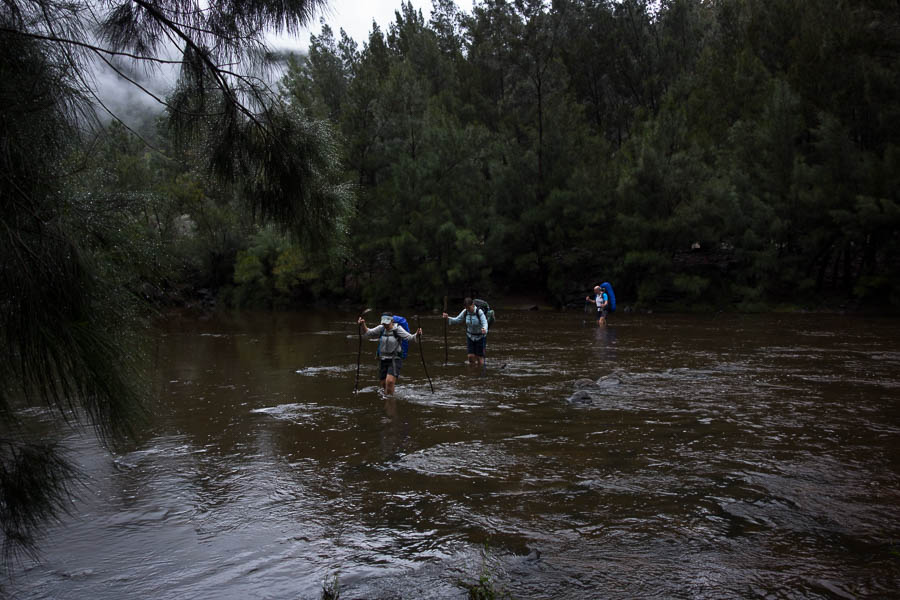 Then it was time to find our way on to the rather steep looking ridge and the track. From this point on the trip was exploratory for me. We climbed steeply on to the ridge. I wasn’t surprised we didn’t pick up a track at the bottom but I had expected once we were on the ridge proper it would become apparent. What became apparent was the track was theoretical. The ridge was steep and somewhat vegetated so it was a bit of a slog up the 600m climb. We weren’t progressing at quite the speed I planned for so we had lunch most of the way up the ridge. The wind picked up around now and I comfortably walked in my walking shirt, fleece and rain coat for rest of the day! 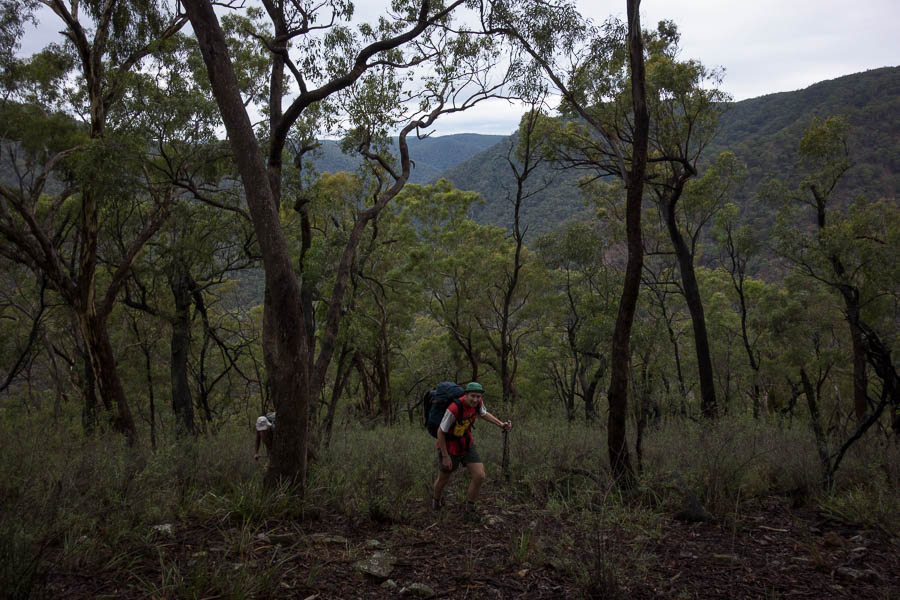 Interestingly the topo has the Buttress labelled as Backender Buttress, but the (theoretical) walking track is called Backbender Walking Track. Presumably a typo?

The wind was brutal but we were happy to be walking along the ridge and starting to get some good views. 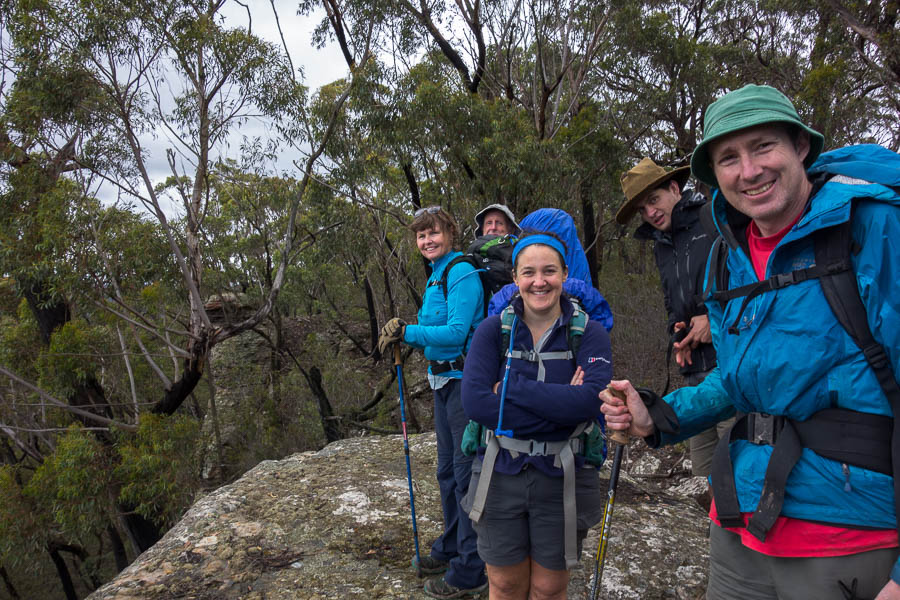 All smiles now that we’re at the top with some views!

Roger located Touga West Trig which is a bit back from the cliffline and a bit of ridge navigating took us around and on to the Wineglass Tor ridge. 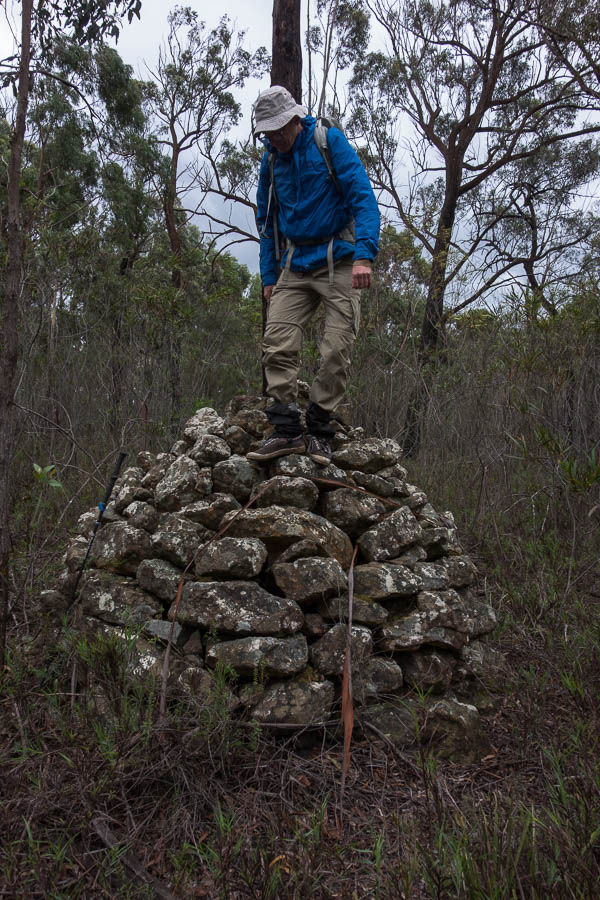 If the logbook at the Touga Trig is anything to go by it doesn’t get many visits. We were the second visit in 2019, but there were none in 2018! 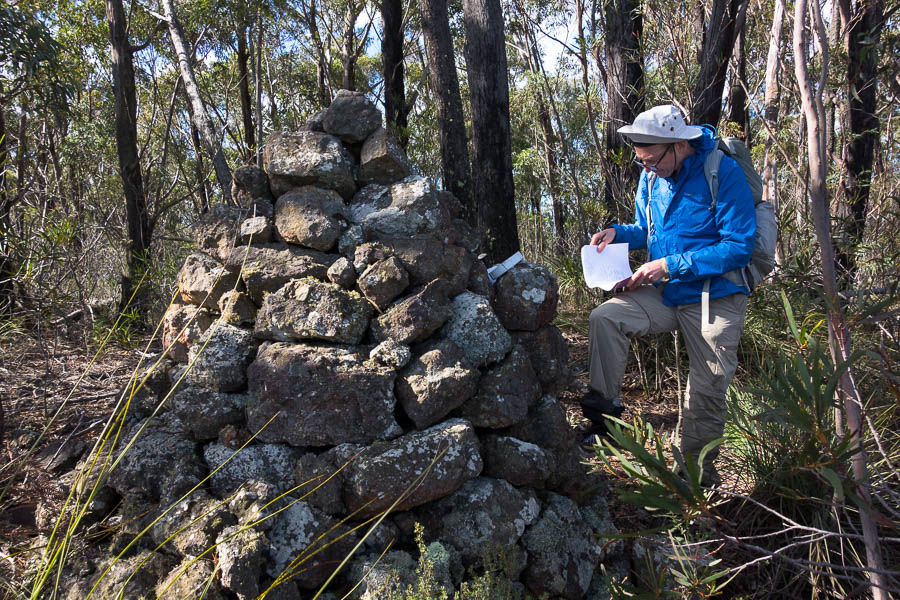 Roger with the logbook at Touga Trig

We had a break and enjoyed the views from Wineglass Tor. The wind was a menace which meant it wasn’t the most relaxing break. 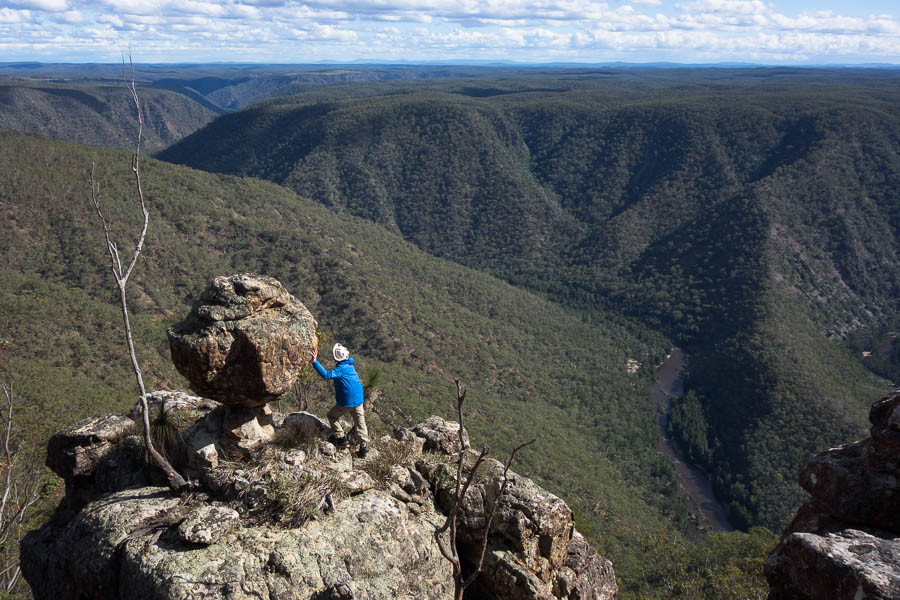 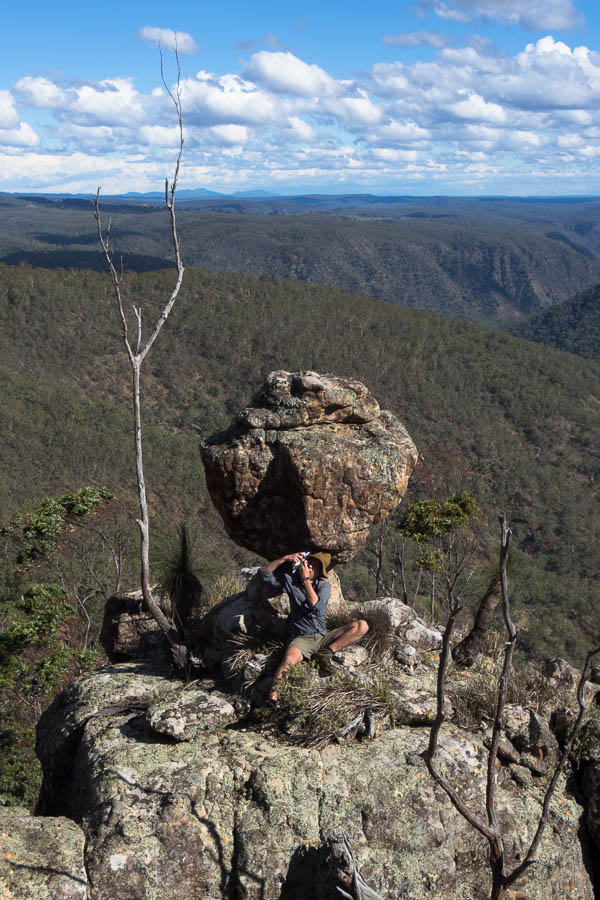 Alex with his goon bag (get it?) 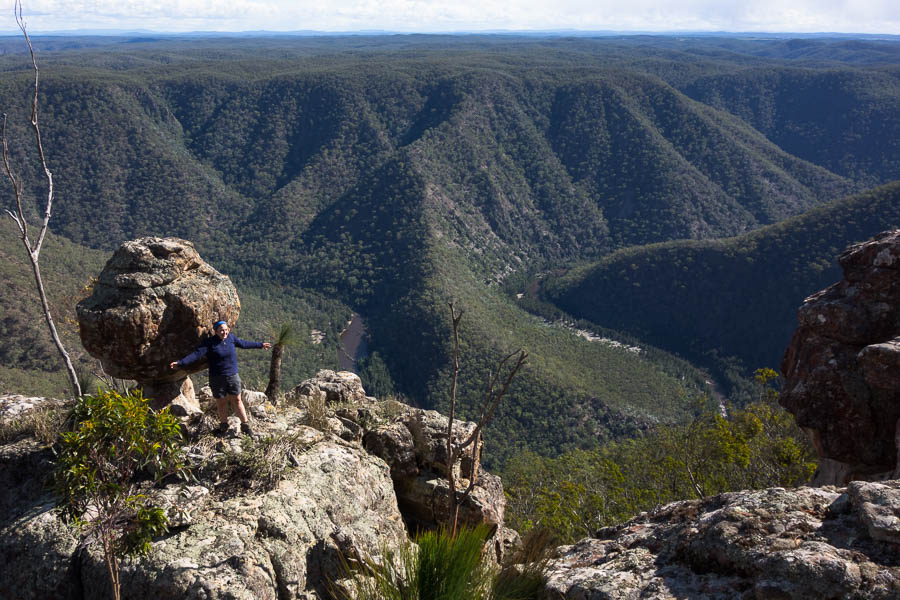 Jo’s the Queen of the World! (and check out Great Horseshoe Bend) 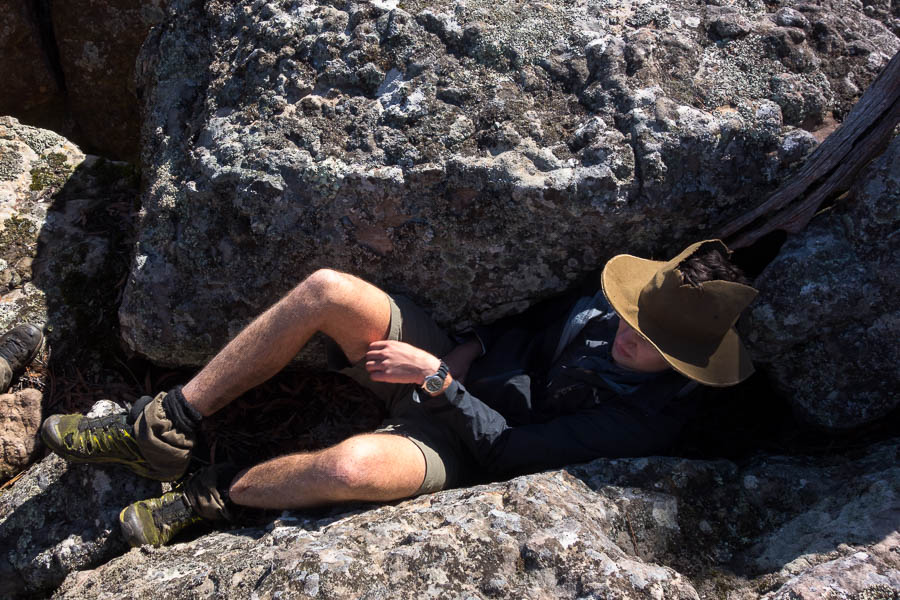 Alex hiding from the wind 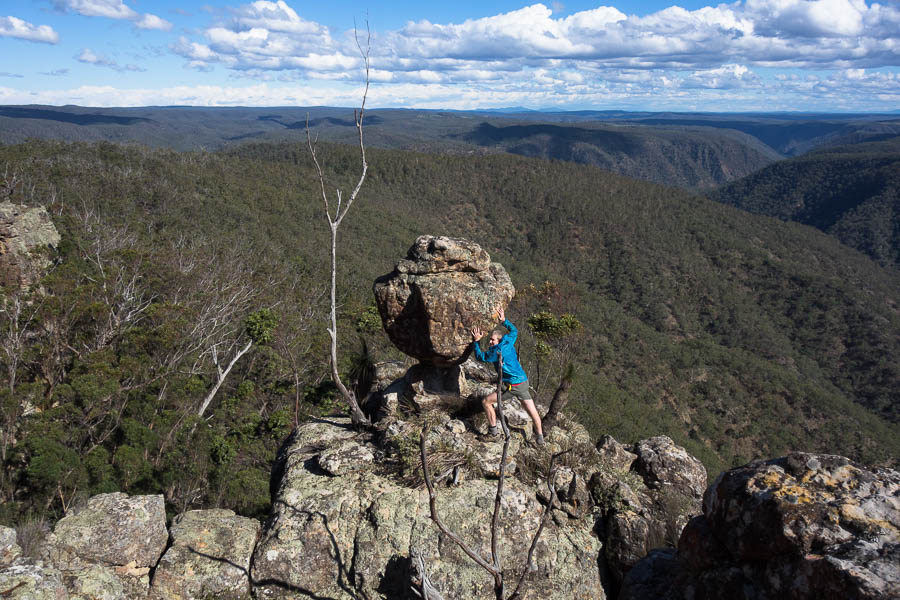 From Wineglass Tor we had to follow a series of intricate ridges around the tops of Battery Spur, Potty Dodger Spur, over Specimen Hill and then down, down, down. The final ridge we descended was pretty steep in places but gave up great views into Tims Gully. 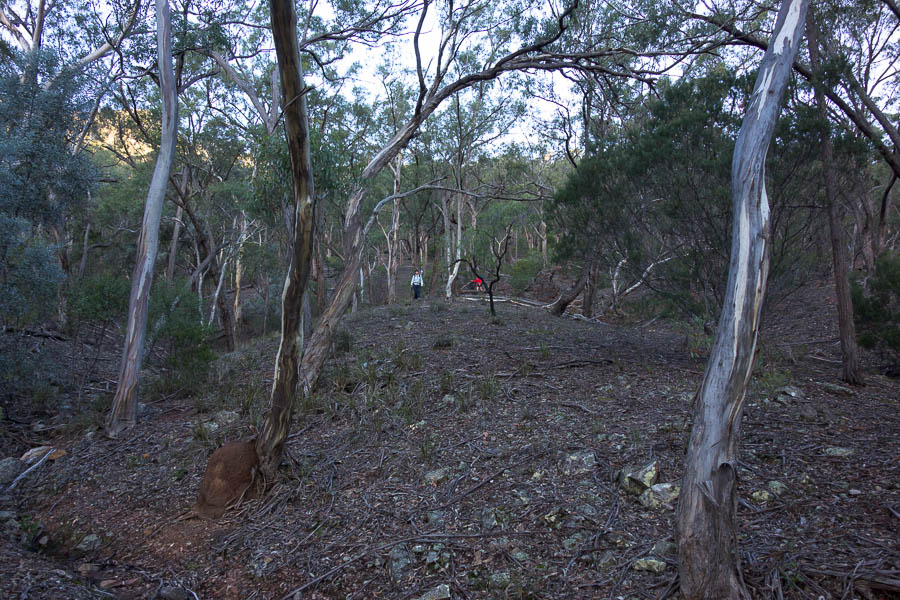 Patsy and Jo almost at the bottom of the ridge

We made it to our excellent campsite just on 6pm and had a rather late happy hour commencing after 7pm! 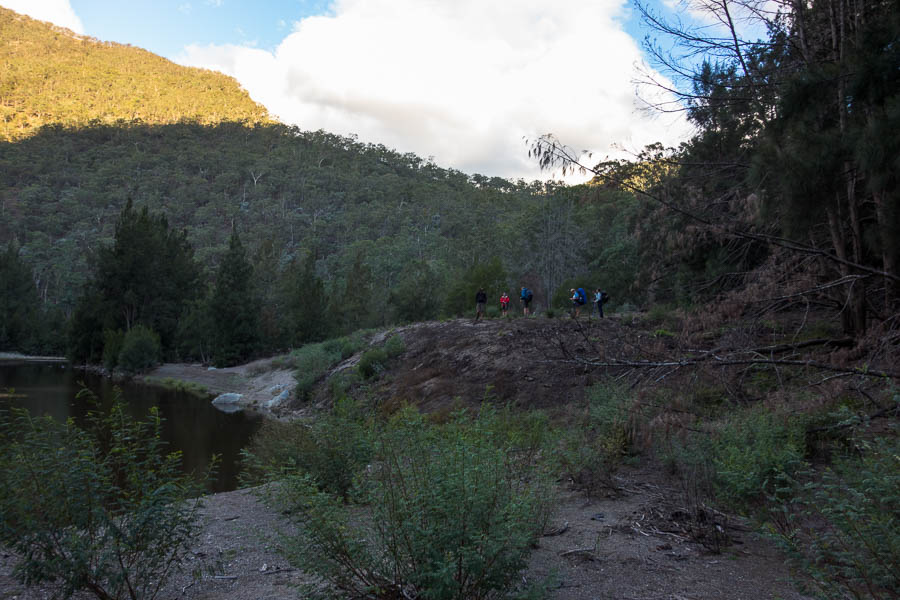 Back at the Shoalhaven trying to decide where to camp 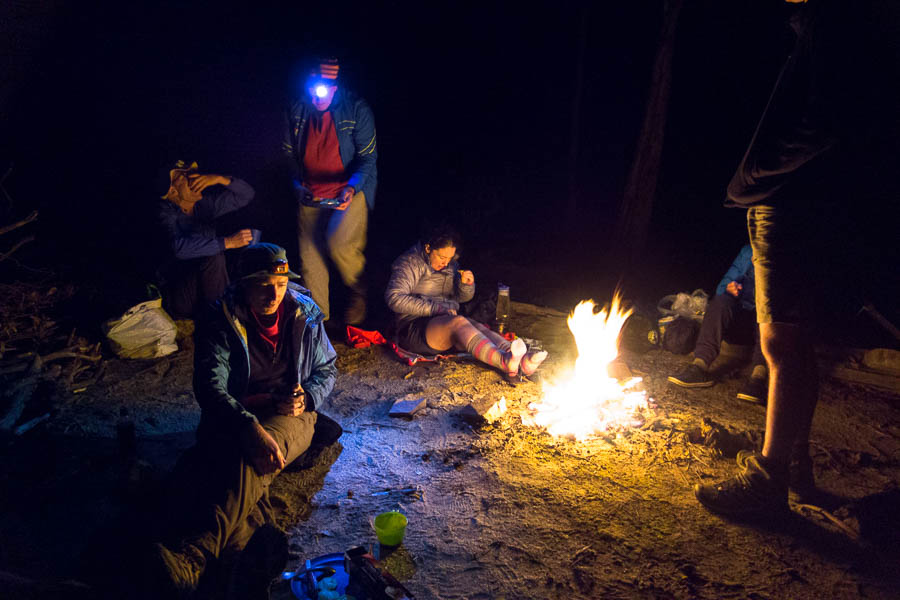 Action round the campfire

The next morning we did an optional trip up Tims Gully to Sparkes Falls. The majority opted for a later wake-up and relaxing morning but Roger, Jo and I headed up the creek. 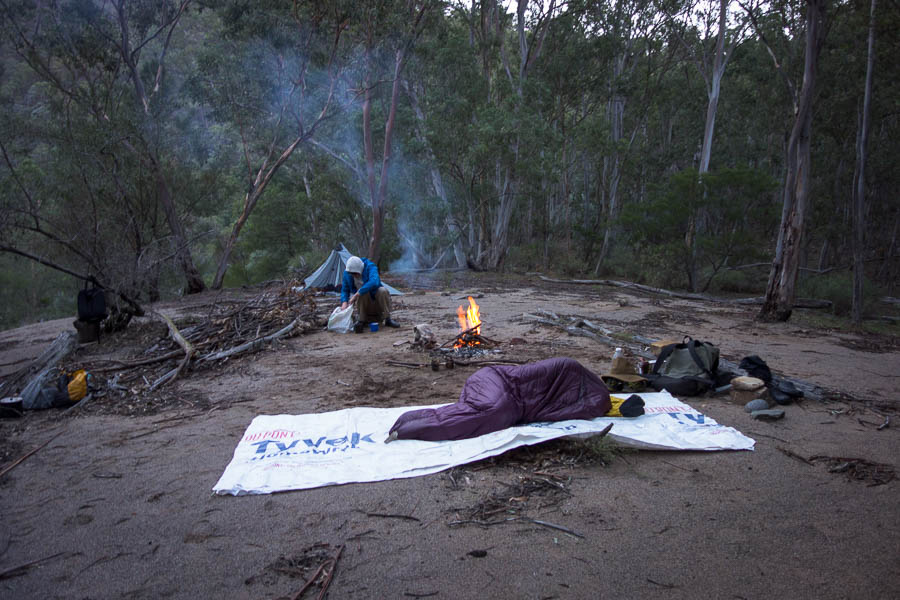 Lack of action around the campfire!

Tims Gully wasn’t particularly exciting and it was very dry which made walking up it fairly straightforward. It was only when we got in the immediate vicinity of Sparkes Falls we found some decent pools. The Falls themselves only had a trickle going over but they were still pretty impressive given how slowly the creek had been rising to that point. 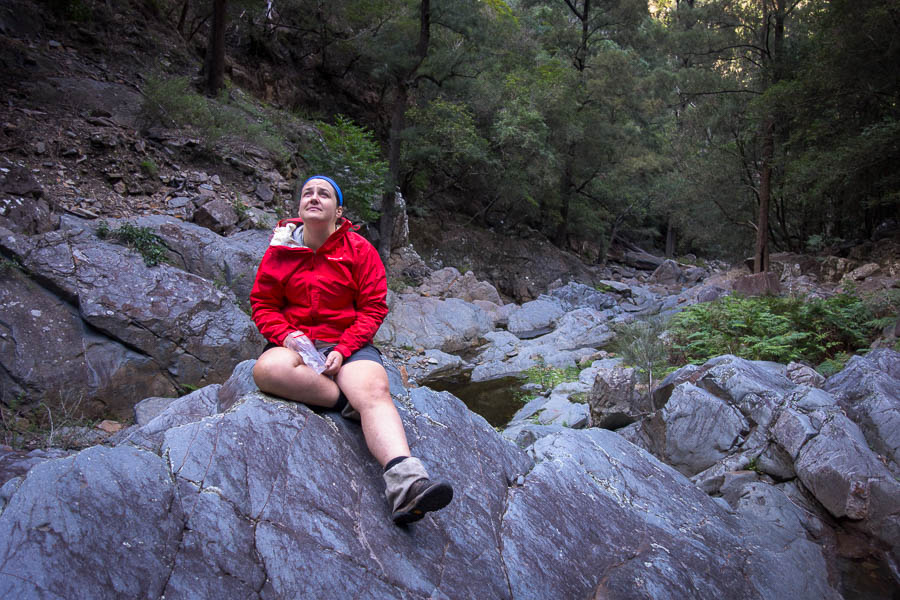 Jo contemplating… but what? 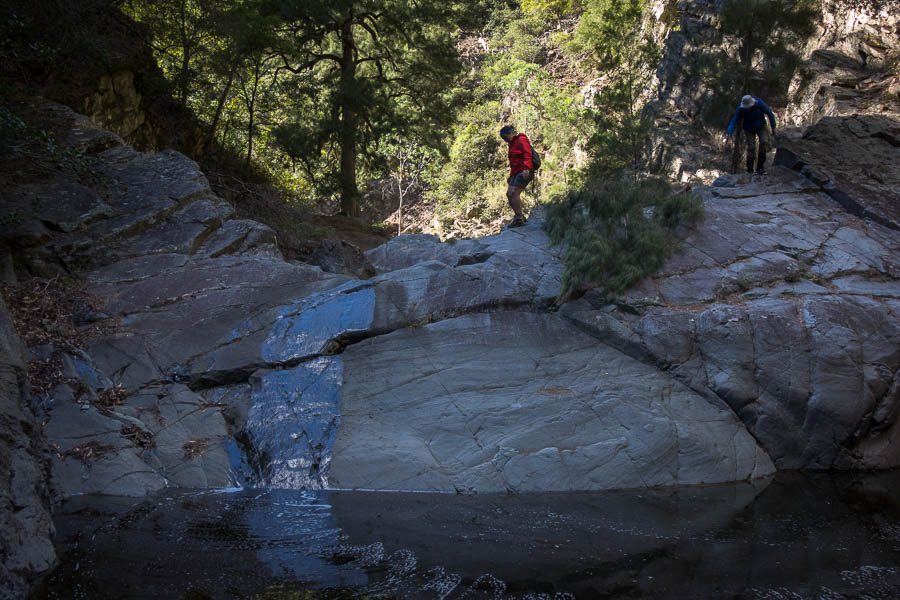 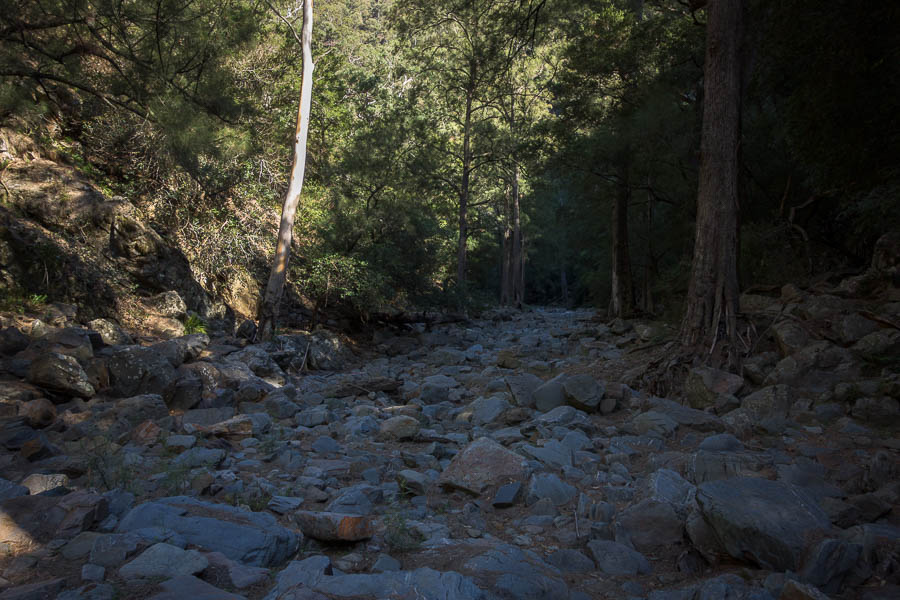 Back at camp we all packed and had lunch. Tom had located a reasonable crossing point just before Little Horseshoe Bend while we had been off in Tims Gully. 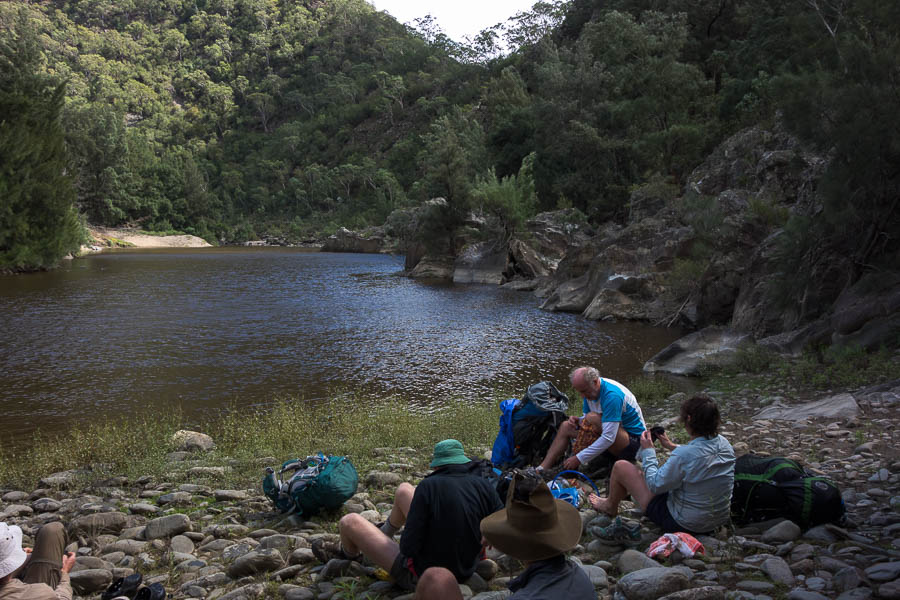 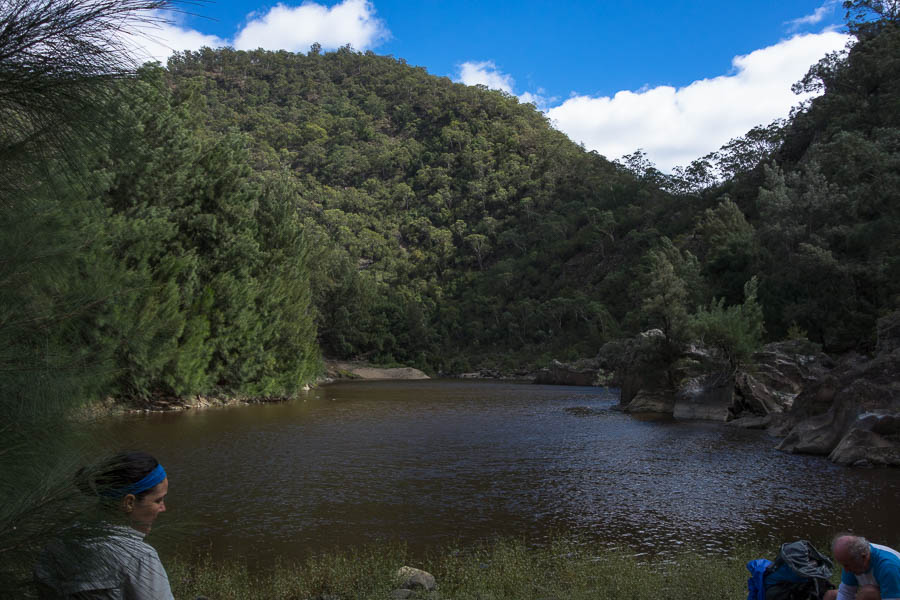 That hill is what we’re climbing in a minute

The ridge was much more pleasant than Backender Buttress. Climbing steeply before flattening into a lovely narrow ridge with great views over the Shoalhaven. I was somewhat surprised to find the remains of fencing going along the ridge! 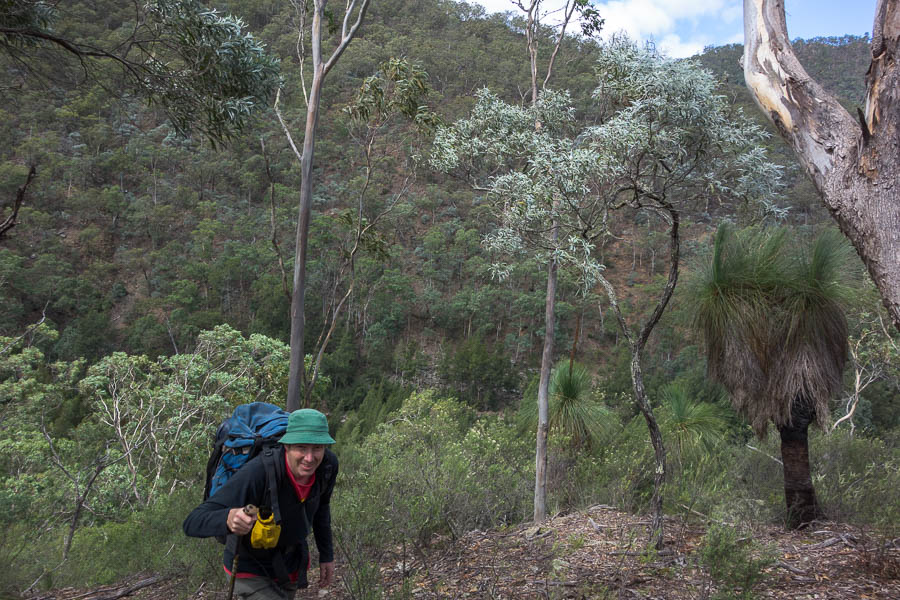 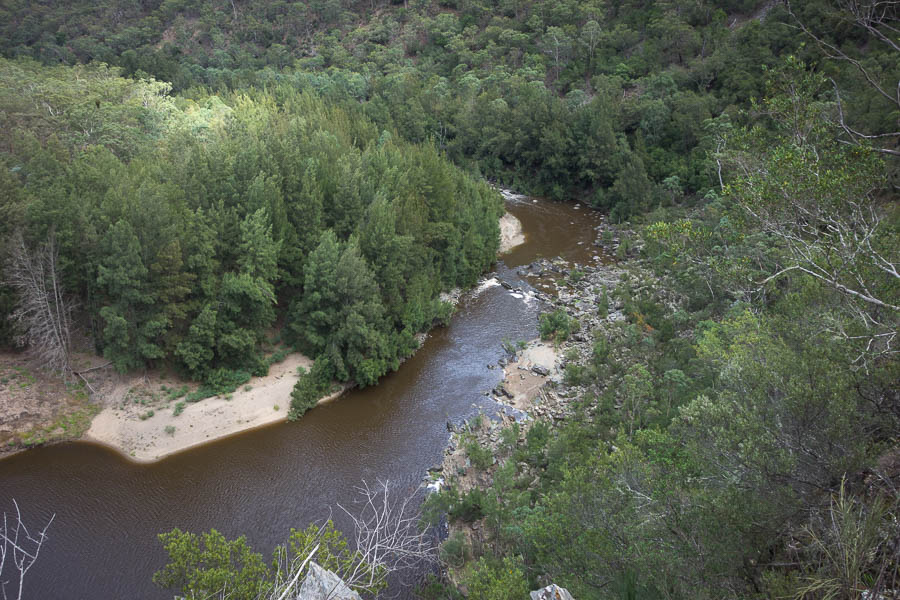 Looking down near our camp 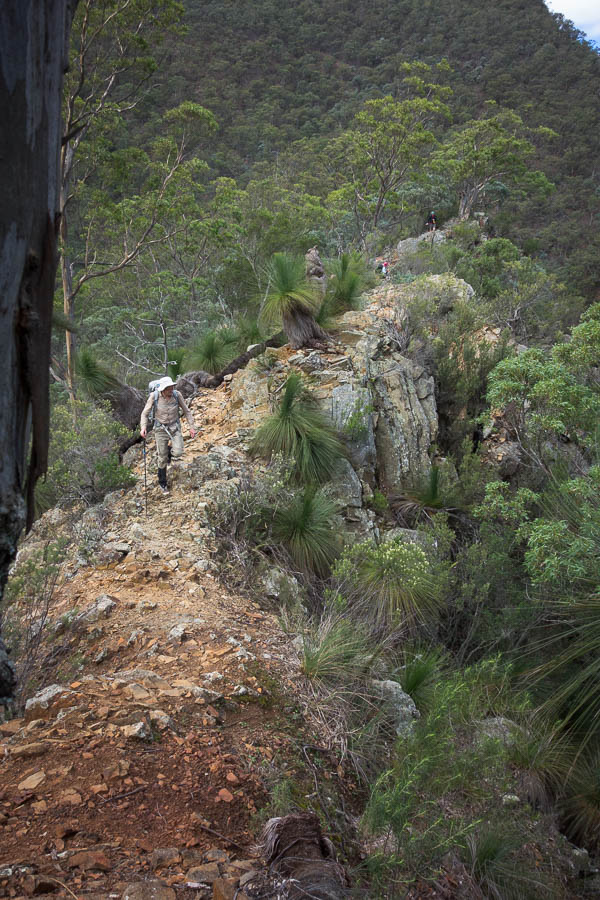 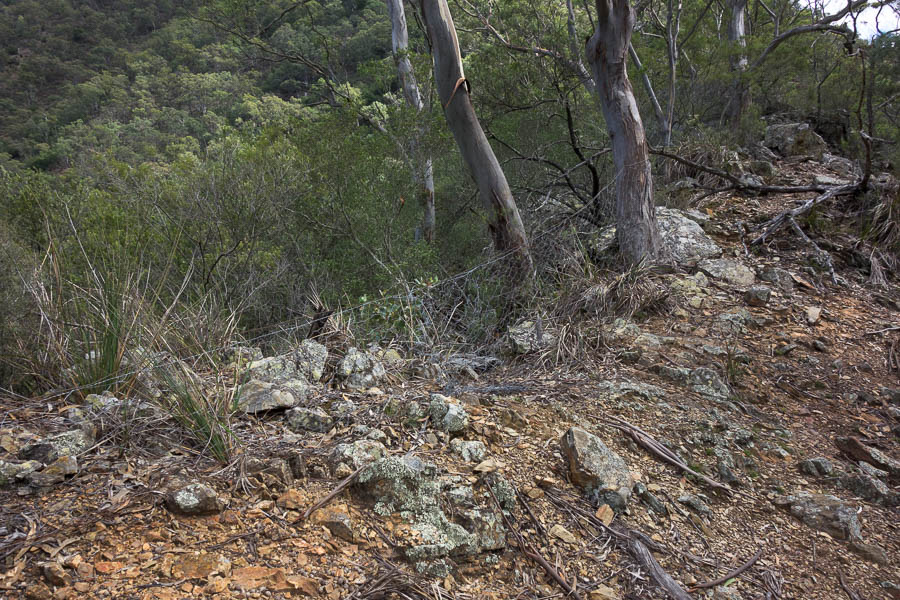 You find fences in the strangest places 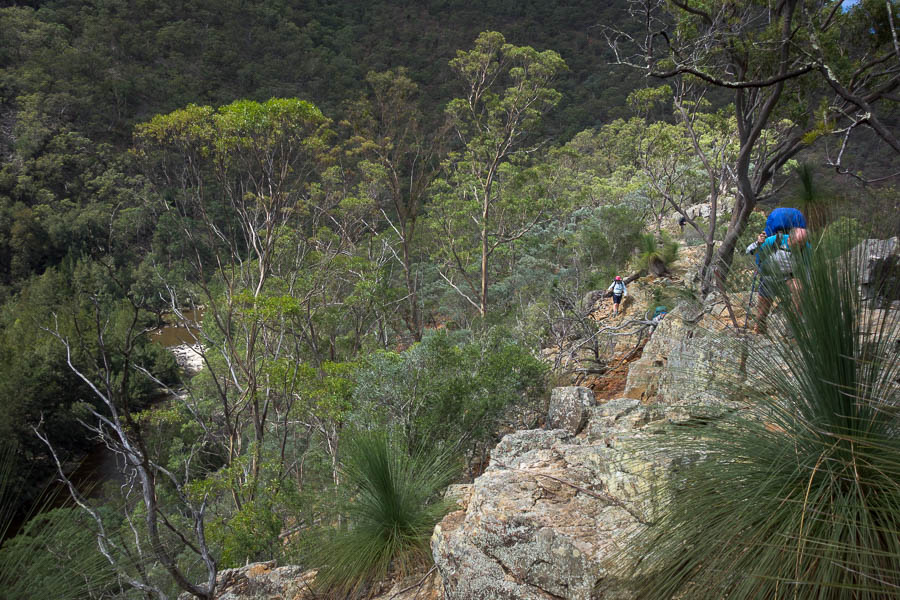 One side of Little Horseshoe Bend 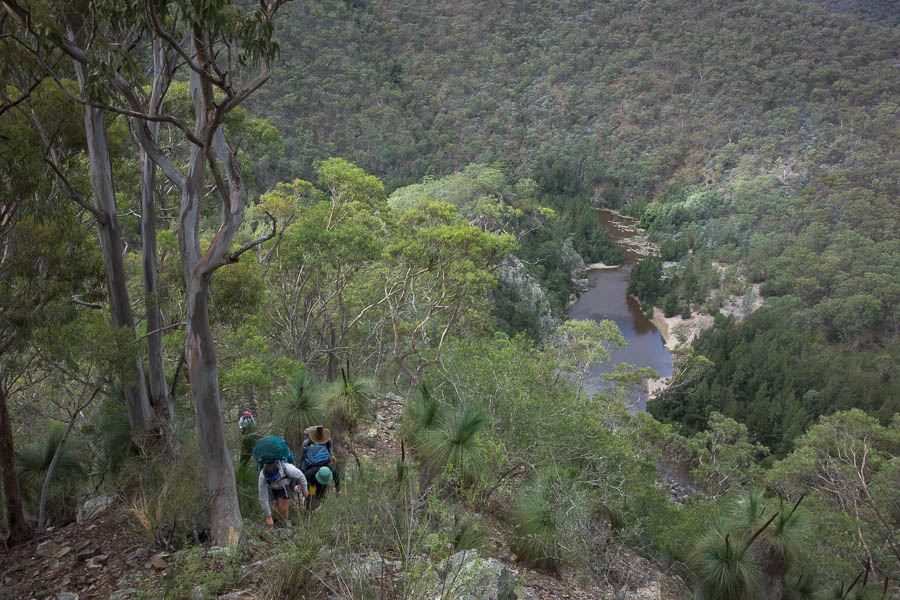 The other side of Little Horseshoe Bend 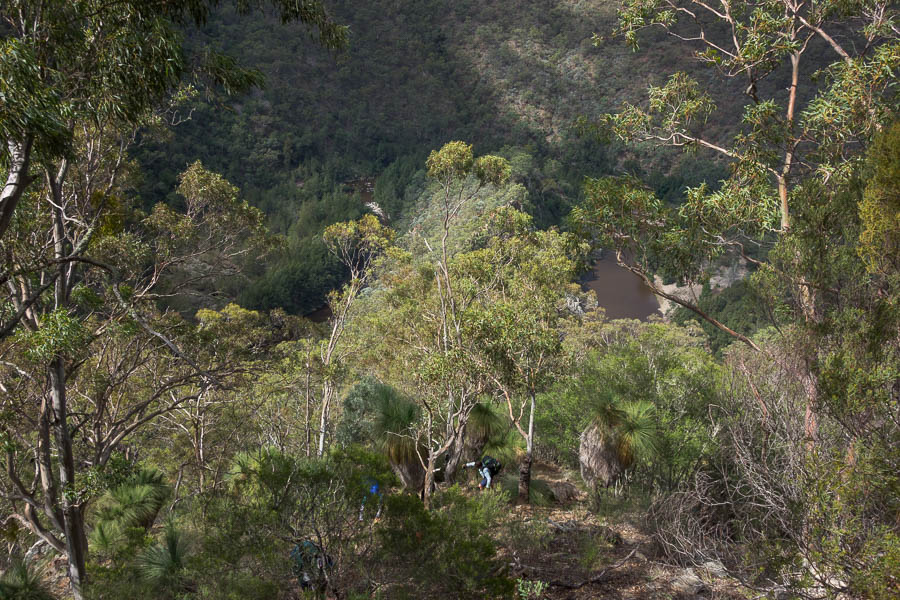 I enjoyed the climb up the efficient (in other words steep) and fairly clear ridge. 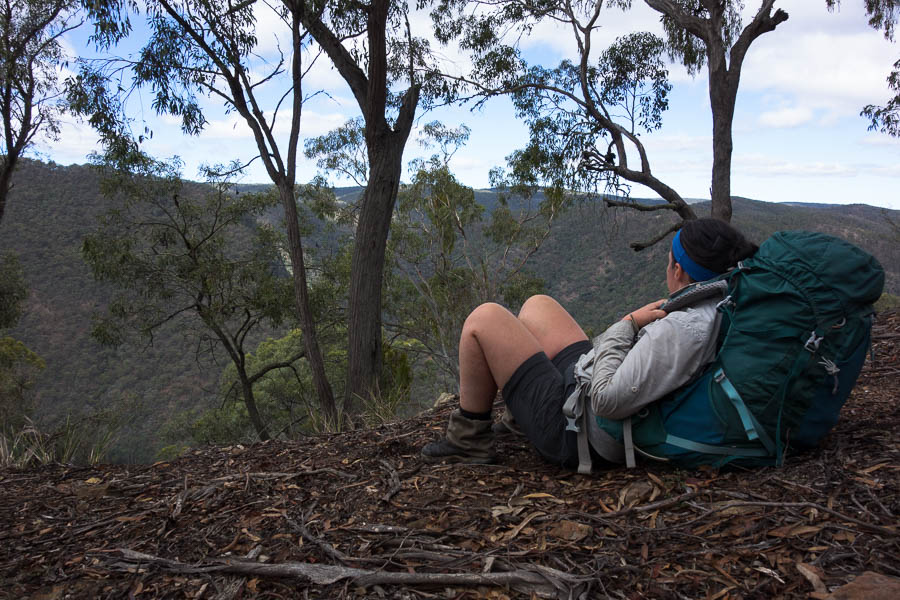 Jo taking in the views, most of the climbing done

Once at the top we picked up an old fire trail then went cross-country back to the cars. A great weekend out in lesser visited region (at least for SBW!).