We got the new financial year off to a good start with a fine adventure off Narrowneck. Probably a bit more excitement and bush-bashing than originally expected. Tom had previously attempted Rockpile Pass and failed, so he was hoping to knock it off this time. 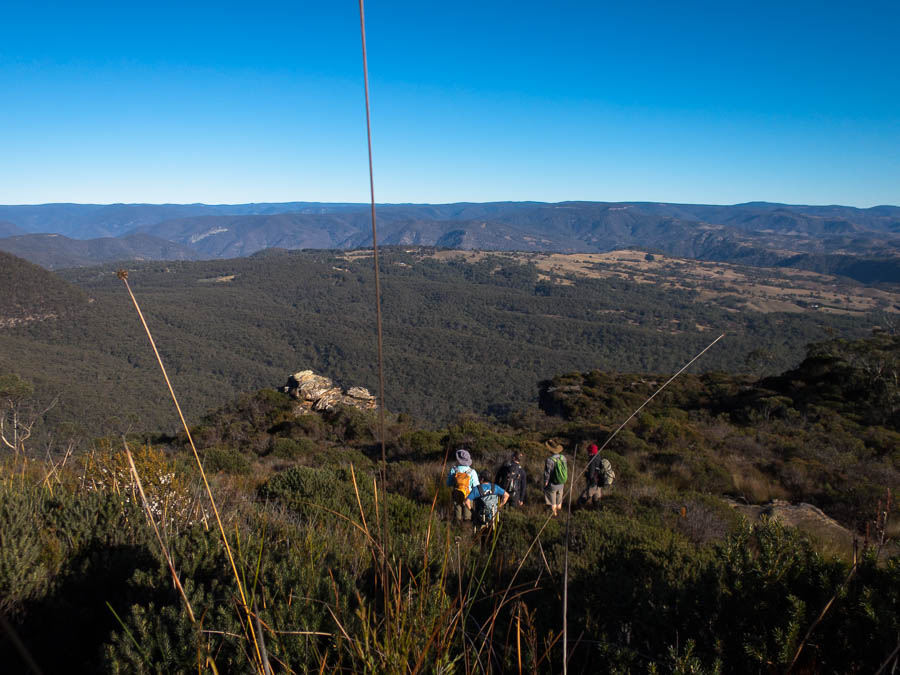 Enjoying the views on another wonderful winter’s day

Supposedly the hard bit was after the rockpile but we didn’t manage to locate the rockpile to start with and ended up traversing around into the next gully (with plenty of delightful banksia bashing). Once below that set of cliff lines we were soon back around at the rockpile which we’d missed coming down to – very obvious from the bottom! 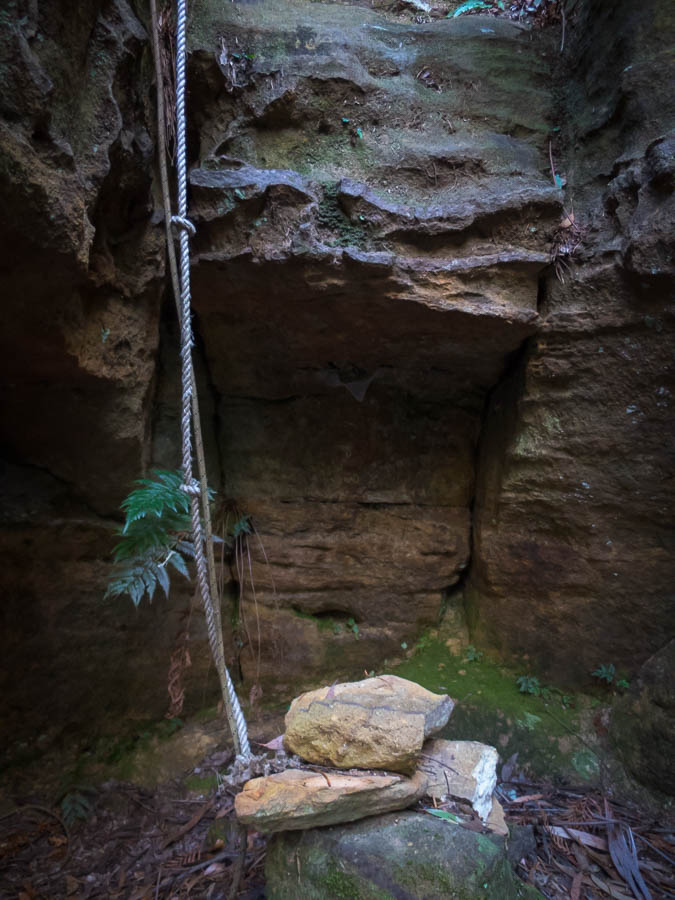 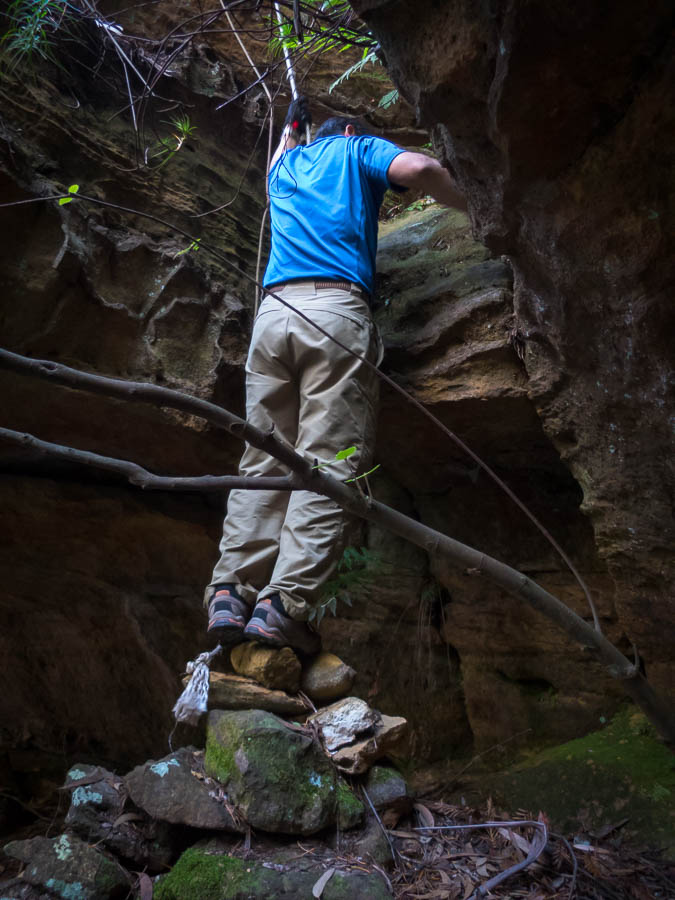 Stanley checking out the route 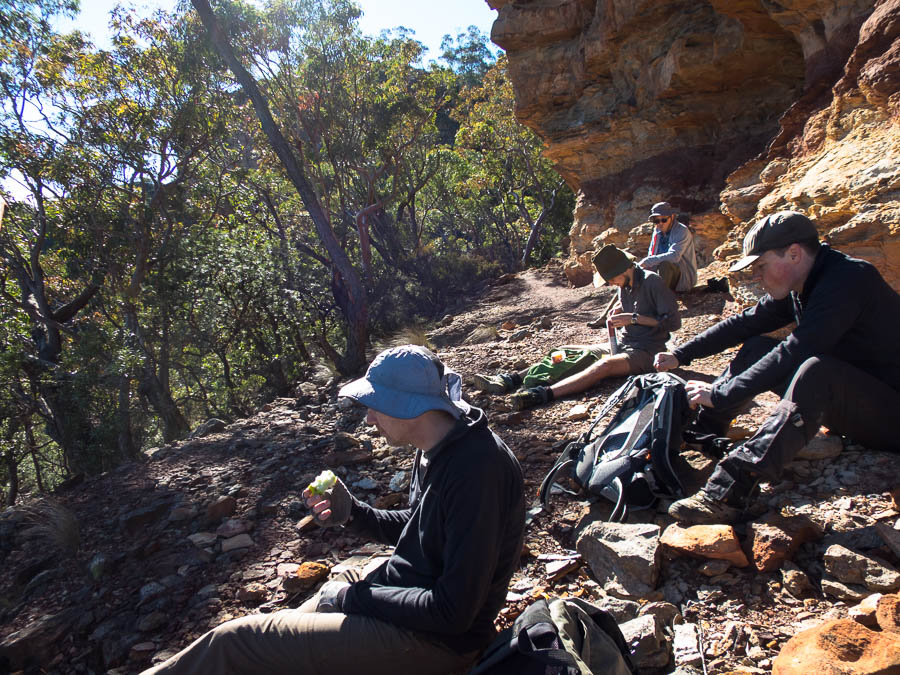 Morning tea in the sun

After morning tea we found the rest of the pass (where Tom had got turned around previously). There were some fixed lines in place which made it pretty obvious where to go. Much to the horror of the rest of as the last person in our party was descending there was a noise you never want to hear. We were round the corner out of site (and out of danger of rockfall) so didn’t know what had happened except it sounded bad. The fixed line had completely severed sending Jon flying. Fortunately asides from some bruising and a heavy landing on his ankle he was ok. We still had a second drop to negotiate but we were much more circumspect about using the rope that was there (and is no longer). 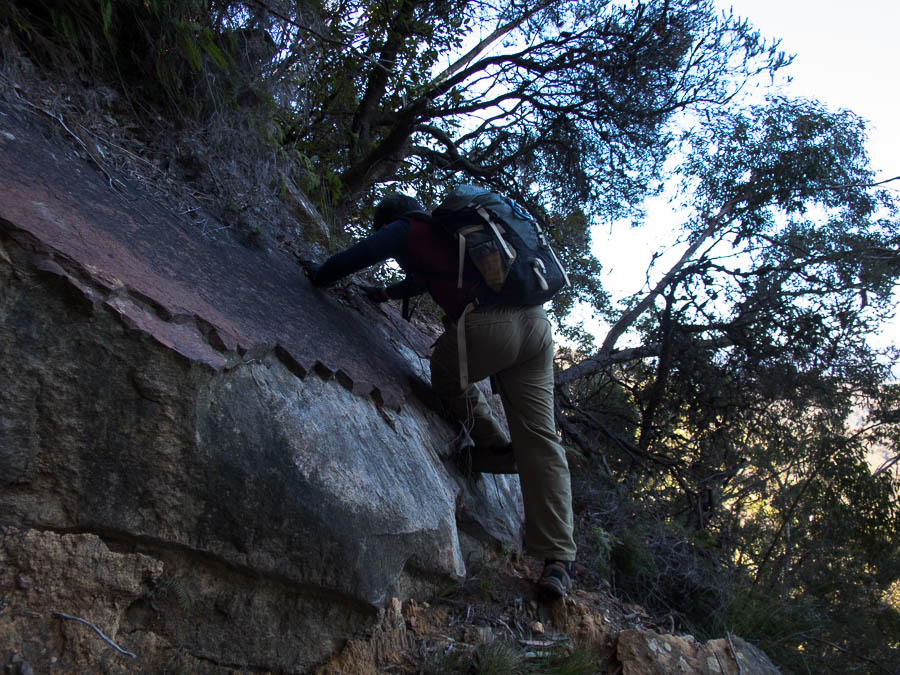 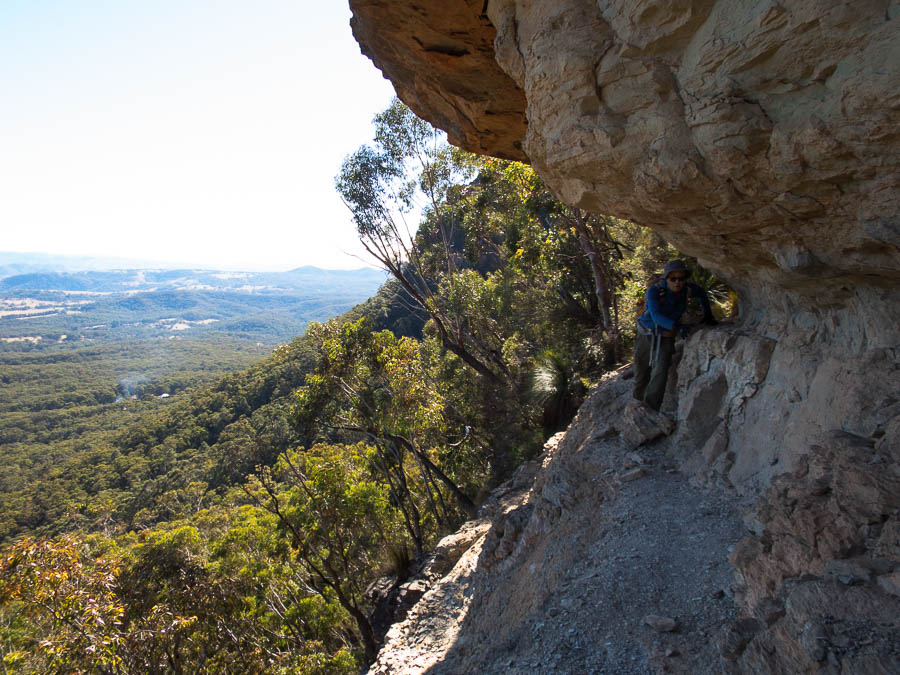 After getting through the pass we followed along the upper cliff line, over a series of obstacles, until we got to a drop we could get past. Oops. So we had to reverse everything we’d done for the last half hour or so. Then we had a decent chunk of off track under the cliff lines, broken by lunch, around to Mitchells Creek. 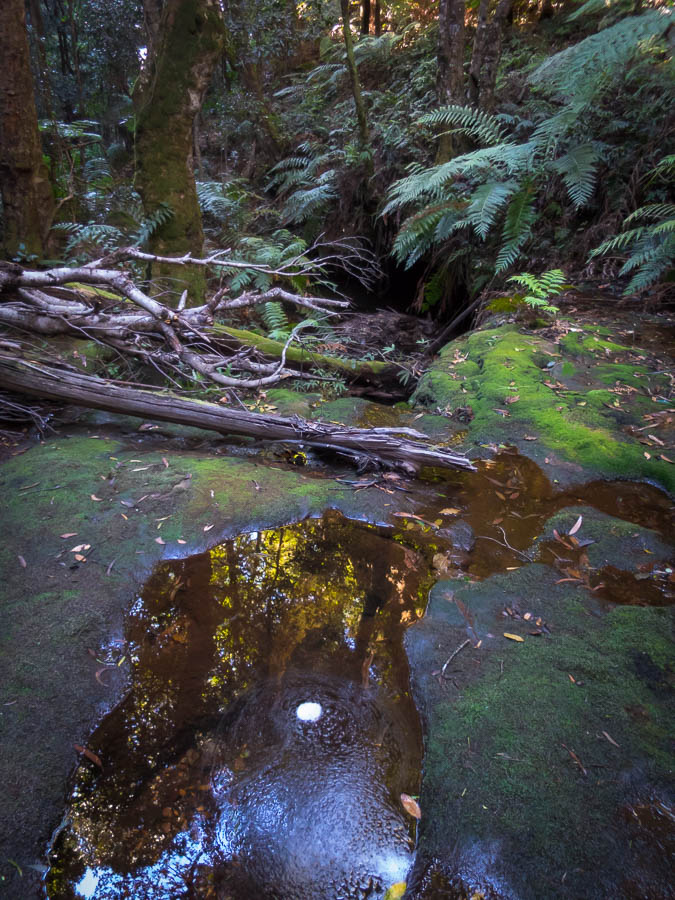 Mitchells Pass is an interesting pass! There are a series of giant spikes in a tree. The spikes are not in particularly convenient positions and the higher you get the more awkward it gets. We all negotiated it with no issues fortunately. 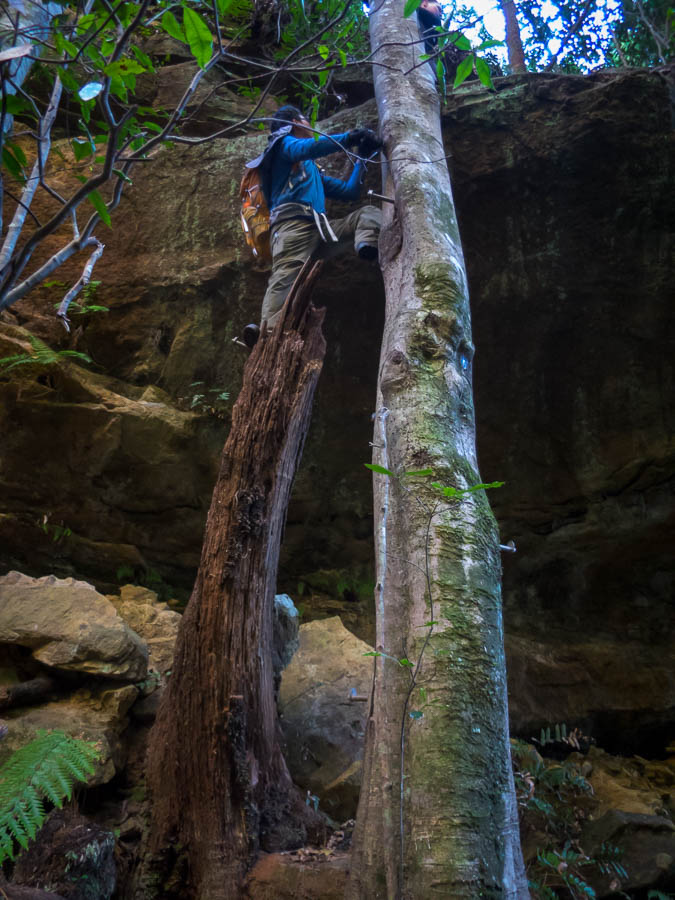 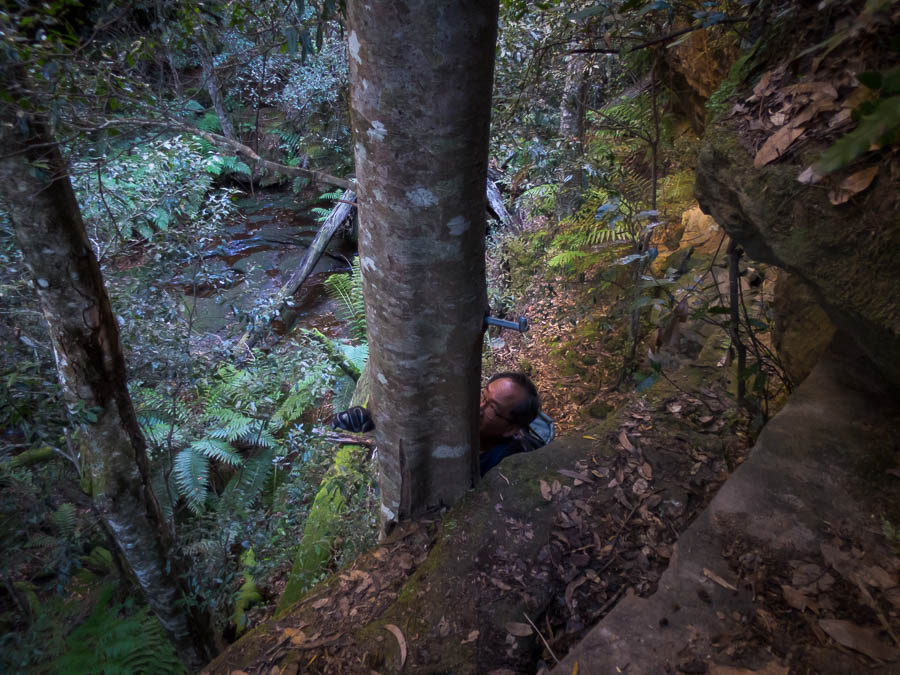 Stanley near the top of the tree

From there we had some quite unpleasant bush bashing up Mitchells Creek. Eventually Alex pioneered a route out of the creek which got us on the tops quite nicely. 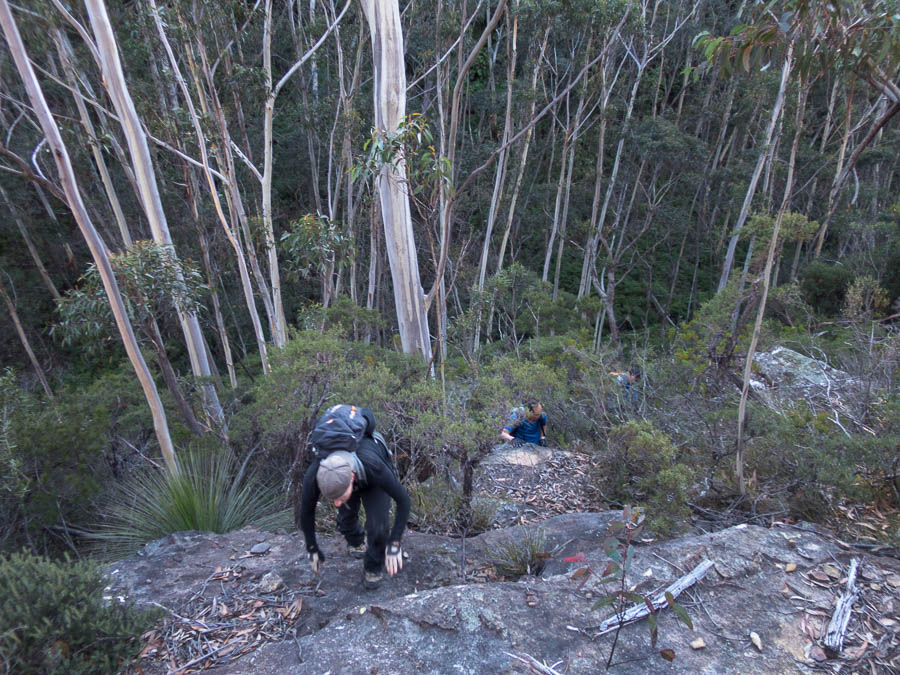 Climbing out of Mitchells Creek 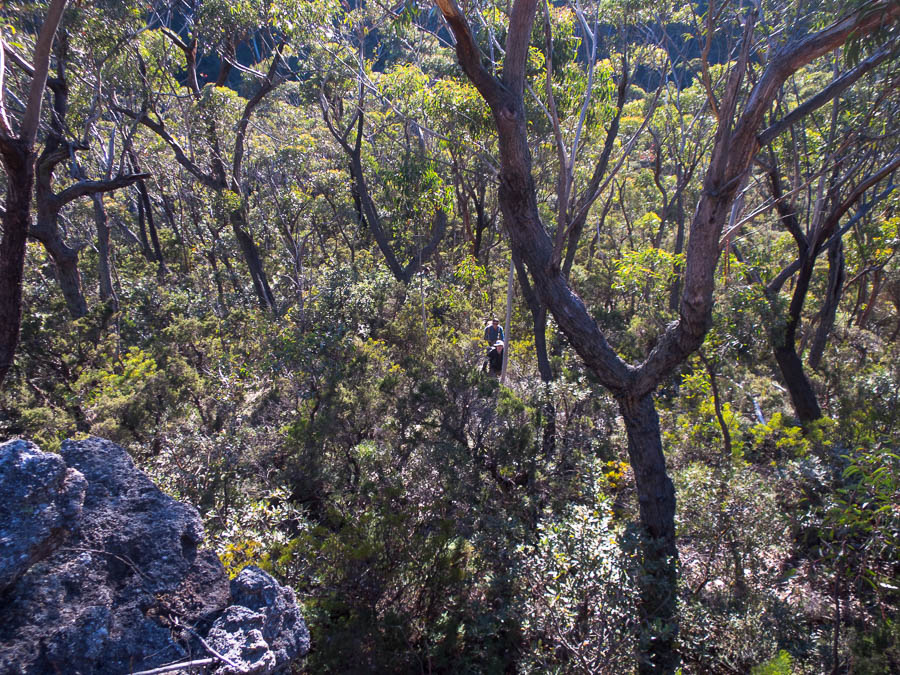 Almost at the top of the ridge

Once we attained the ridge it was only a couple of hundred metres back to the firetrail. We managed to time our return to the cars right on sunset. An interesting and challenging day out. There was mutterings of needing 10 years for the memory to dull and think of a repeat trip!