This was Vivien’s third attempt to run this trip with extreme heat and wet thwarting the previous two. I was a johnny-come-lately to the event not having been on the list for either of the earlier trips. Injuries and life brought our starting line-up down to 5, some defectors in a rival party of 5 taking a much easier trip to Box Creek Falls.

Alex started the weekend well by forgetting both his bushwalking clothes and his sleeping bag. Fortunately Tom had brought two sleeping bags up to Kanangra so Alex was able to borrow one. We were away from the Walls carpark just after 8am. Sierra had never been out on the plateau and was soon pointing out landmarks to us… just the completely wrong ones.  We took our time enjoying the views from the plateau lookout before heading off towards Coal Seam Cave.

We had an early first morning tea at Cottage Rock and then we were off track down to Arabanoo Creek. 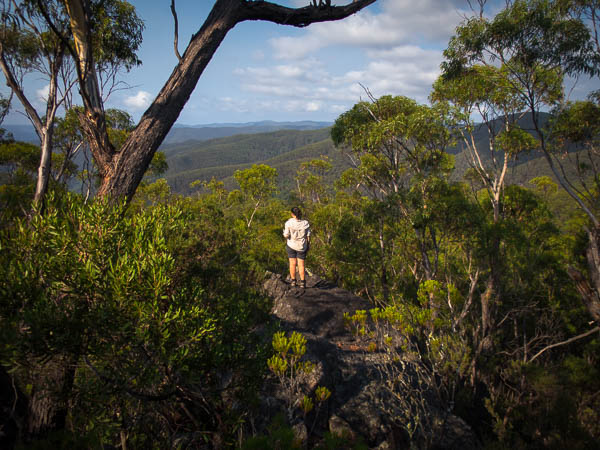 We were joking about whether there would be any water in Arabanoo Creek and were pleasantly surprised to arrive at a pool. The going was pretty straight-forward as it was largely dry and we could in the main just march down the middle of the creek. I managed to trip over and land heavily on my right hand so we decided it might be a good time to have morning tea. 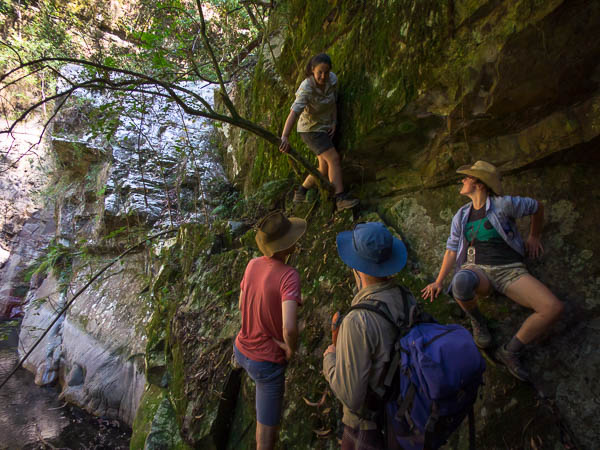 Jo on one of the trickier sections

There were a couple of scrambly sections which we had to negotiate fairly early. With my right-hand somewhat out of action this upped the difficulty level for me. When it came to skirting round pools for the sake of keeping my feet dry I, for once, was the first to plunge in. At one stage Alex decided he was going to throw his pack across the pool… after a few swings he realised the pack wasn’t going to make it and tried to stop… next minute both Alex and his pack were in the pool having lost his balance. Fortunately nothing hurt other than pride. 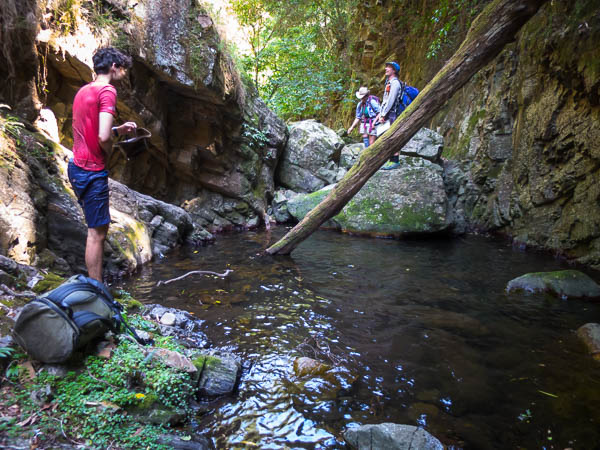 After that pool I decided to take the high route and managed to avoid getting more than knee deep but the others went down the creek getting chest-deep wet. After his unintended ‘jump’ Alex decided it was time to hit the heavy stuff – out came a can of berry cider (never to early to start drinking?!). 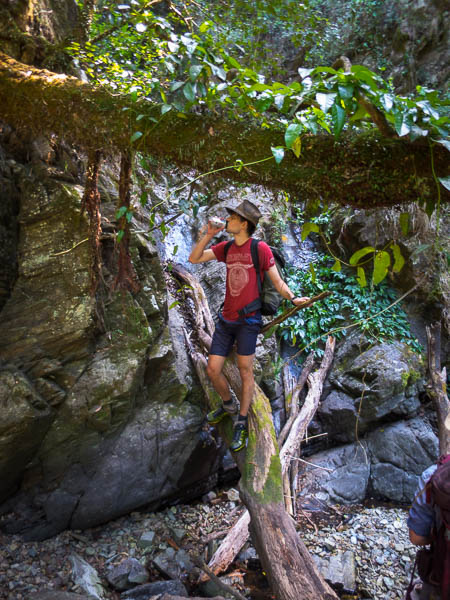 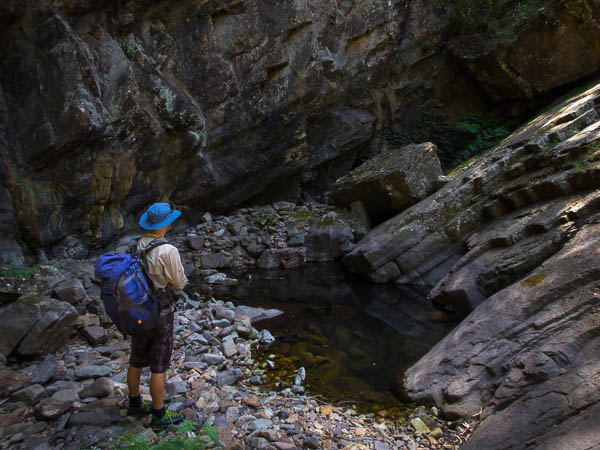 Vivien admiring one of the more dramatic sections in Arabanoo Creek 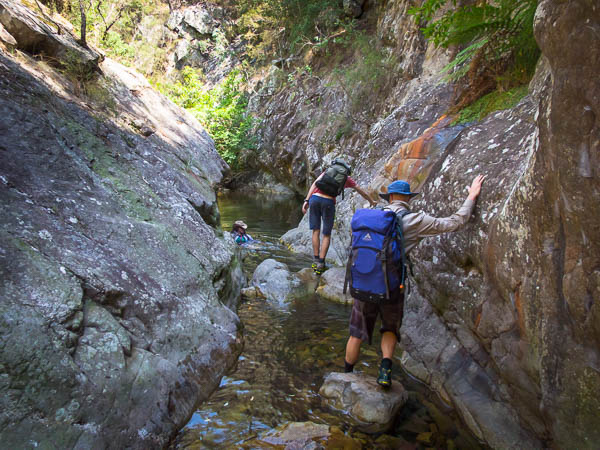 Our only mandatory swim 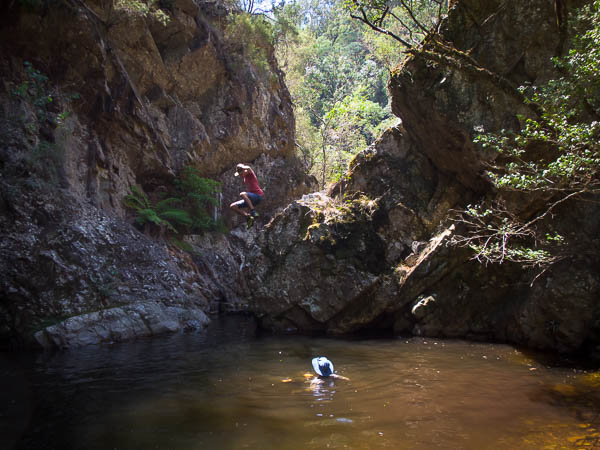 A planned jump this time 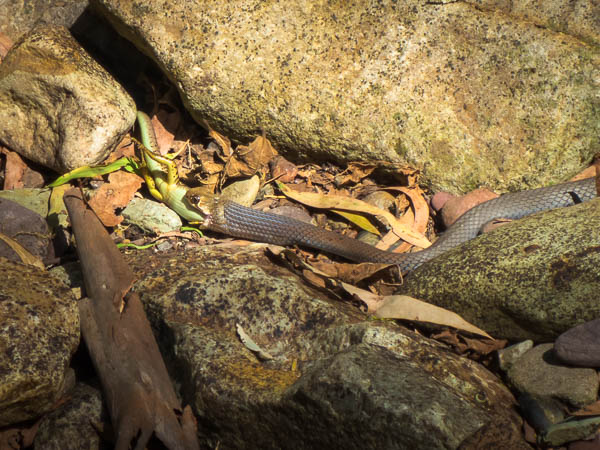 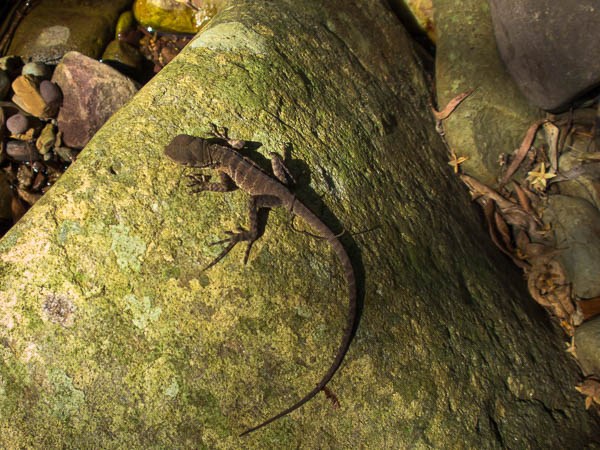 Not sure if this guy was alive or not, certainly wasn’t scuttling away

Eventually we made it to Christys Creek which had perhaps even less water than Arabanoo Creek. Then a few hundred metres to the junction with the Kowmung where Vivien had promised a “decent campsite”. I was less than convinced of the ‘decency’ at the stony spot we initially ended up at, but fortunately Jo discovered the real campsite slightly upstream. The Kowmung was in a pretty sad state – no flow, just large, somewhat unappealing, pools. 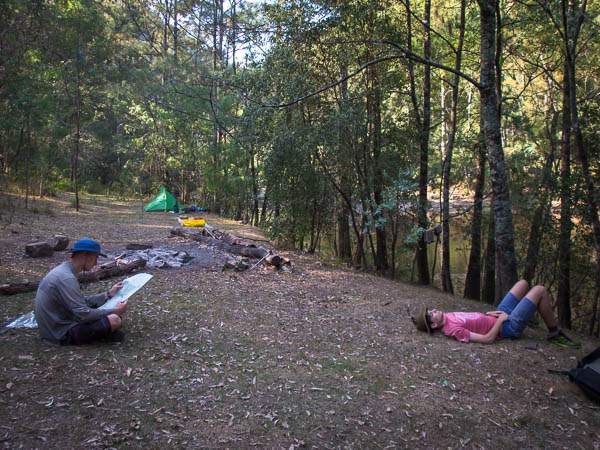 Vivien & I did manage to find a pool that was over waist deep for a swim which was fantastic. With a Park Fire Ban in place there was no fire to ward off the mosquitoes that were out in force. The women seemed to receive a lot more attention from the mossies than the guys and ultimately that was what sent us all off too bed. I had a bivvy on loan from Bill which the others were pretty disparaging off. After some initial difficulty sorting out how to best have my pack propped up to keep the bivvy off my face it came good. I had a brilliant night, safe from the mosquitoes and not having to swelter in my sleeping bag. 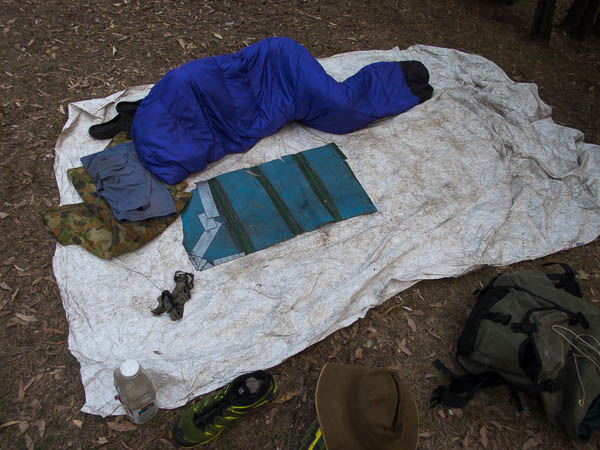 Given how miniscule Alex’s sleeping mat & pillow are I can see why he doesn’t bother sleeping on them. 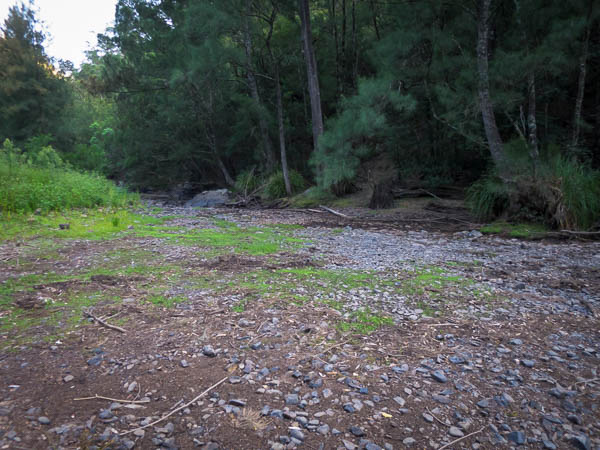 The mighty Kowmung. Or where it should be.

The next day was going to a be a long slog back up to the cars so we got an early start. The first bit of uphill was the most unpleasant as we were directly in the sun. 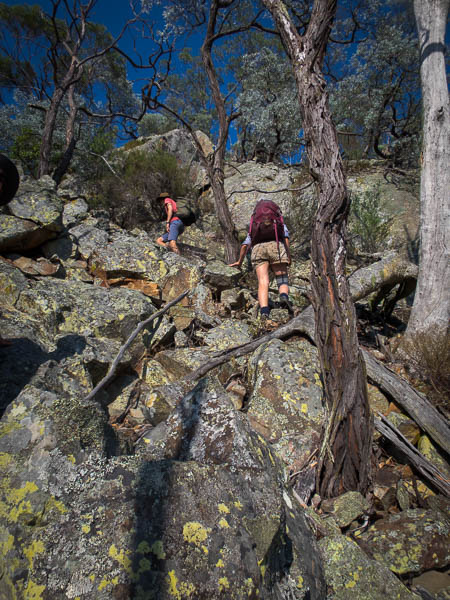 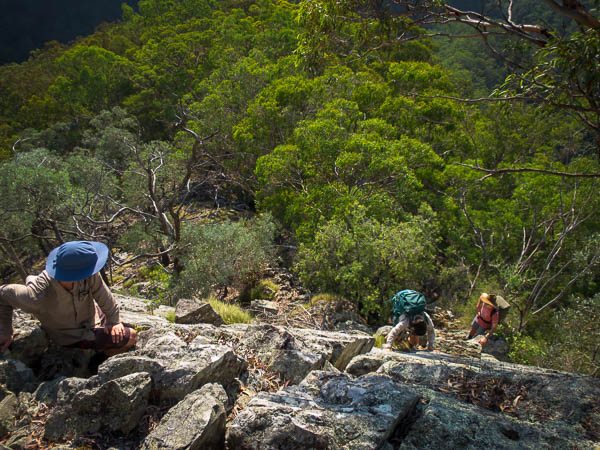 The most technical section of scrambling we did, on Stonehag hill 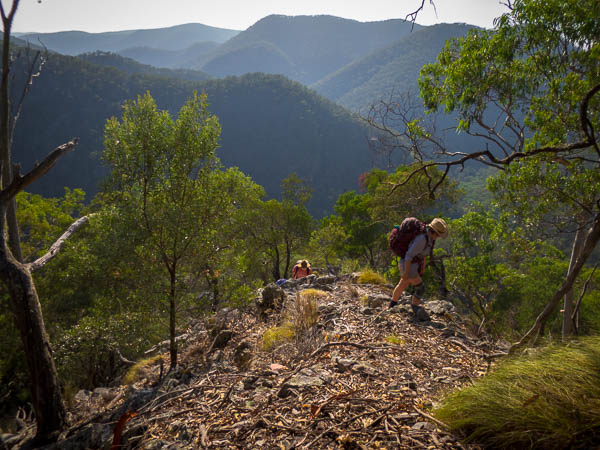 Views over the Kanangra-Boyd wilderness 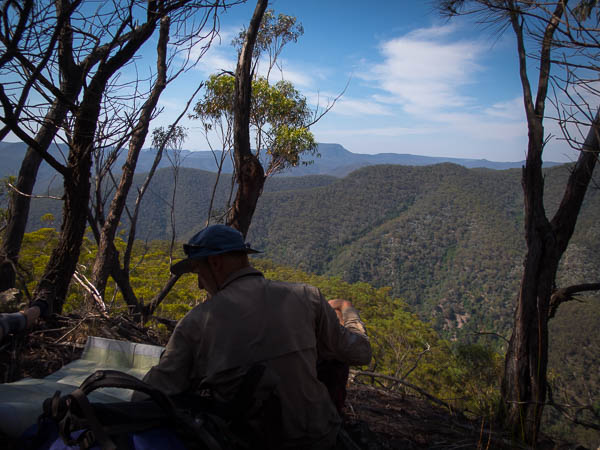 Morning tea and trying to match features to the map. Mt Colong of course is unmistakable through the trees. 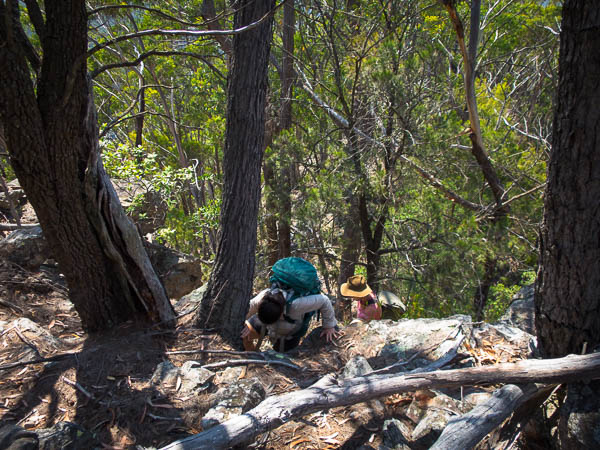 More scrambling to get to Arabanoo Peak 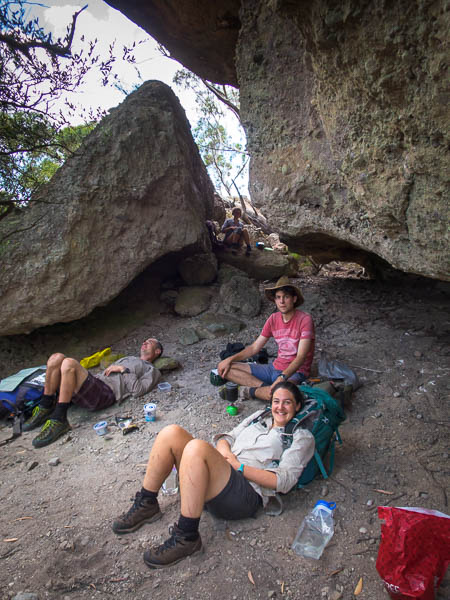 Lunch in a cave below Mount Colboyd 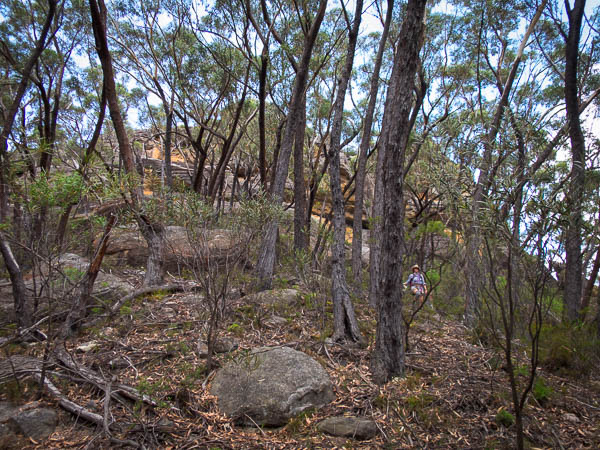 Descending into the saddle at the other end of Mount Colboyd 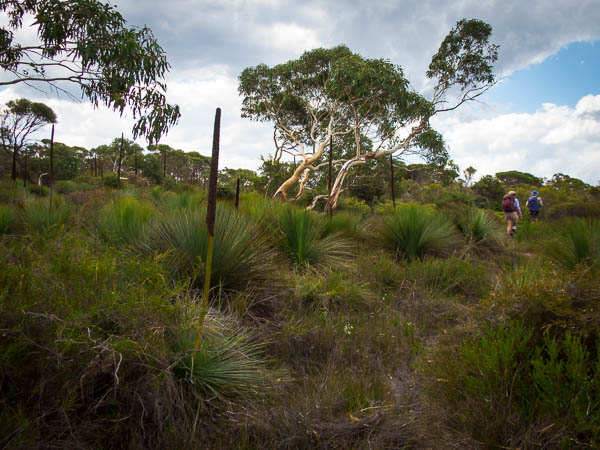 The Box Creek party were waiting for us (well, out at the lookout) at the Walls carpark when we got back. We had dinner in Lawson on the way home – a good weekend had by all.