We signed up for a week-long SBW trip going to Kakadu and figured it was a waste to come to the NT for just a week. So what else was there to do? Having just bought packrafts Tom suggested we could packraft Katherine Gorge. We decided to spend 2 days walking along the tracks on the Southern rim, and then 3 days paddling in the gorge. The downside of this plan was that we were going to be carrying heavy packs to start with as we would have all our food plus the packrafts (~3kg including paddle).

So we set off with around 19kg packs (lots of drinking water as well) from the Nitmiluk Visitor Centre early on the first morning. We got good views of Gorge 1 & 2 from Pat’s Lookout and Jedda’s Rock. 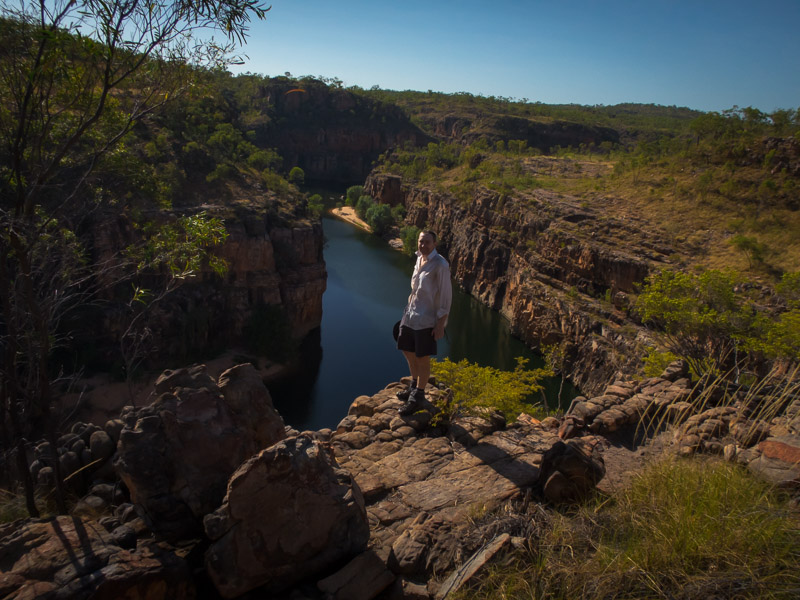 Tom with Gorge 2 in the background

The first day was hard work, with our heavy packs, and 34°C temperature forecast. We were glad to get to the Lily Ponds for lunch and a swim. After the Lily Ponds we still had a bit of walking to get to Smitt Rock our campsite for the night. The bushwalkers campsite at Smitt Rock is set high above the gorge with excellent views. We were pleased to find the creek next to the campsite running so didn’t have to worry about drinking water. To have a swim we headed down the marked track to the river. Tom demonstrates his preferred way of entering water of unknown depth, with Smitt Rock behind him.

After lounging around in the shade by the river for a while we pioneered a different route back up to camp. We climbed a couple of waterfalls in the small creek that was running past the campsite to return more directly. 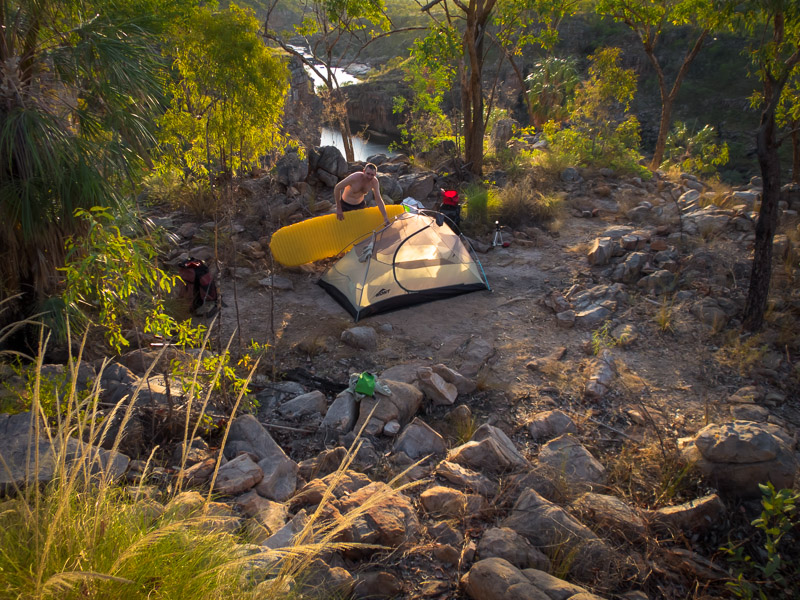 There were plenty of sites at Smitt Rock and we were the only ones there. We choose the site closest to the cliffs which had lovely views for happy hour and sunset. It was the first of four very warm nights – not sure if it was a micro-climate thing near the gorge but it never really cooled down. 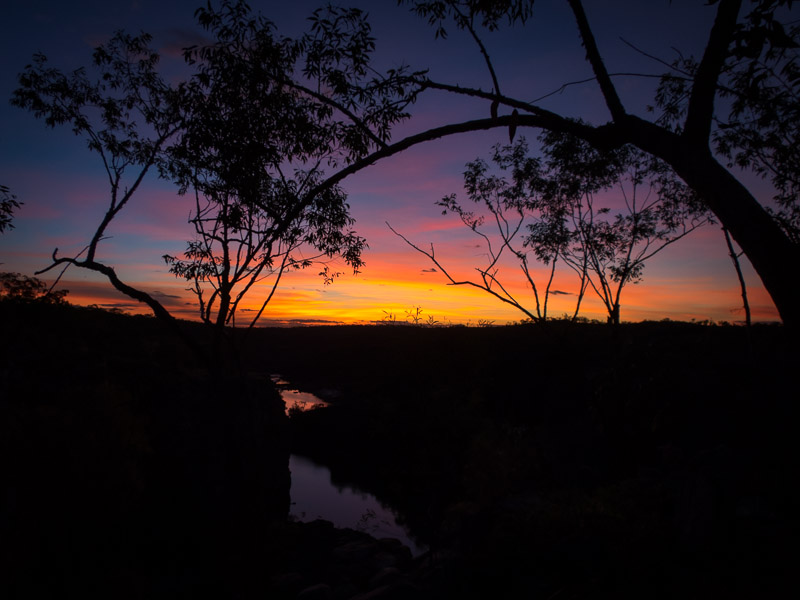 On our second day we walked from Smitt Rock towards 8th Gorge. The track is marked with arrows the whole way. There is not much of a track on the ground and we spent quite a lot of time looking for the next arrow. 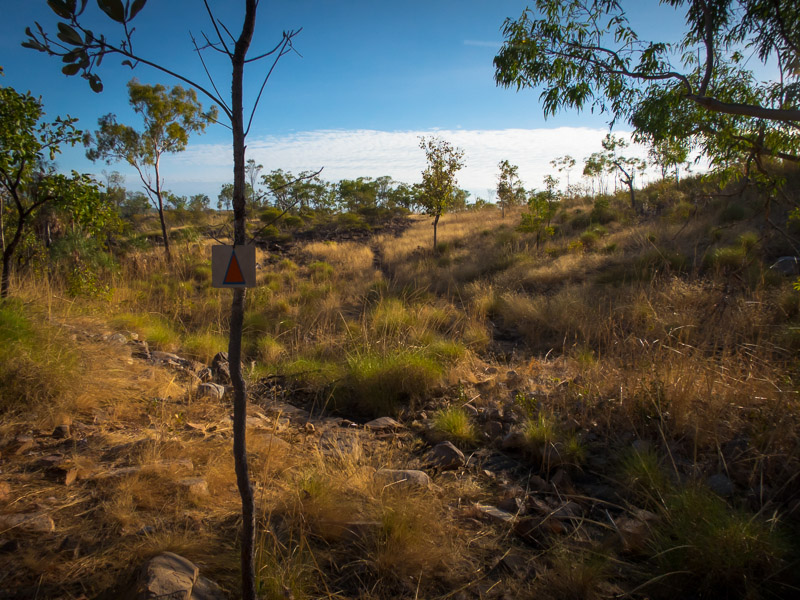 Arrows mark the route every 50-100m. Not always that easy to spot!

Having morning tea shortly before the junction with the Jawoyn track we met another group of bushwalkers. They had been at 8th Gorge the previous night. We had a brief chat and they mentioned there was a small stagnant pool at 8th Gorge and when quizzed said there was no running water. 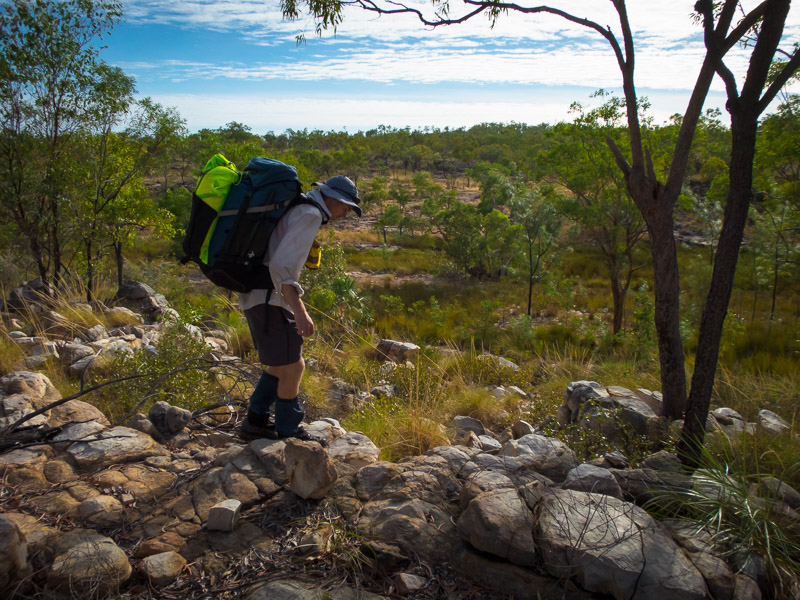 Tom with his heavy pack (the yellow thing is the packraft)

Despite it being a hot day and both of us feeling the effects of the heat and our heavy packs we decided to go on a side-trip to Jawoyn Valley. Glad to ditch the packs we found some of the art sites that were shown on the map, and maybe some that weren’t shown. 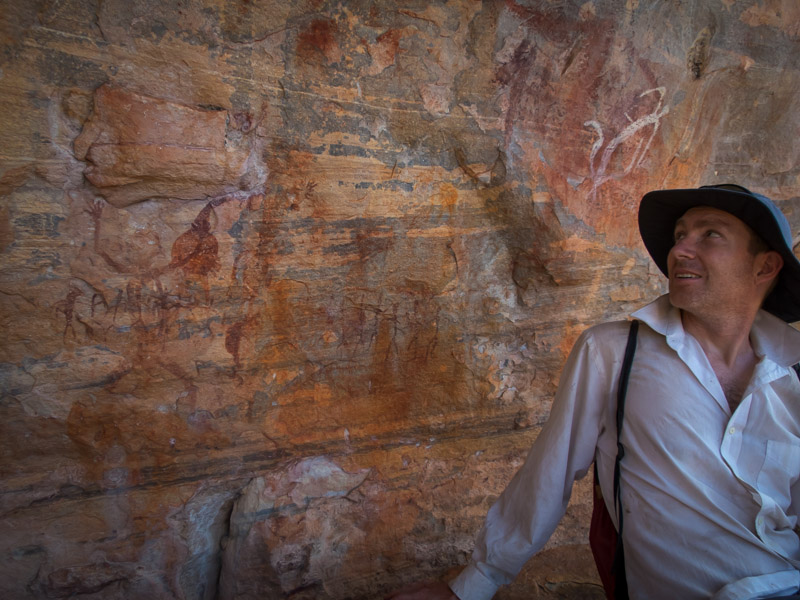 Tom with some of the Jawoyn Valley art

Tom decided we should go ‘off piste’ on the way back rather than follow the trail. We walked down a fairly uninspiring dry creek but were delighted when it turned into a few beautiful waterholes. Only problem we hadn’t brought lunch with us so couldn’t linger for too long! 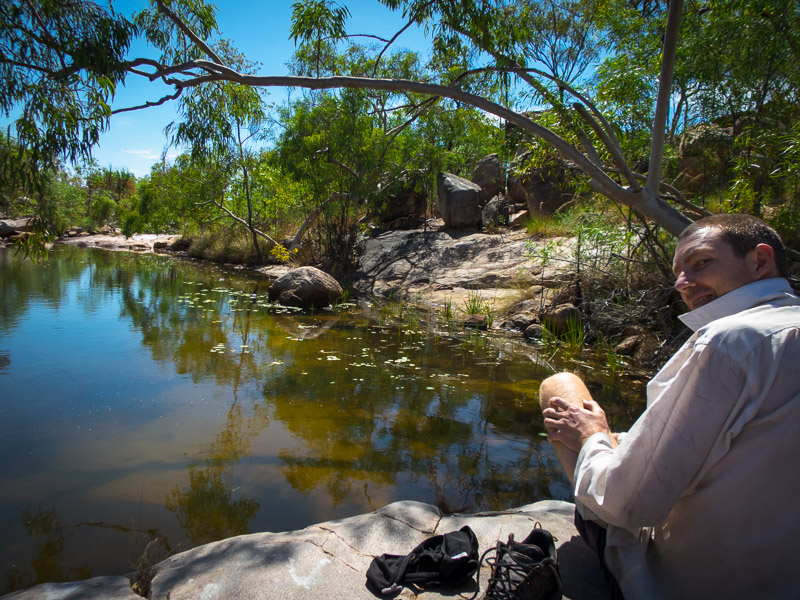 We spotted the toilet at the 8th Gorge campsite far sooner than expected. And then were most surprised to come to a large waterhole which had a waterfall running (ok, maybe trickling) into it. So much for the small stagnant pool and no running water! It just illustrates how different people’s perceptions can be based on their experience. 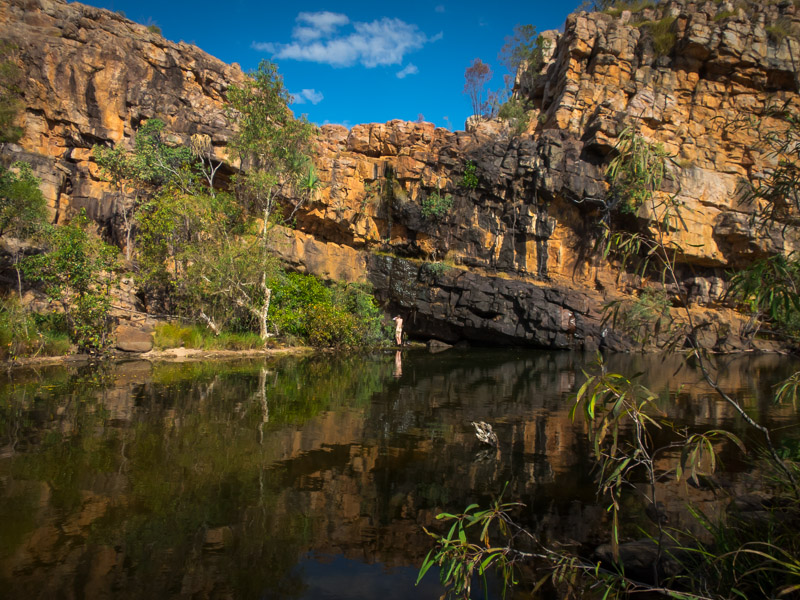 Tom filling water bladders from the running waterfall, next to the beautiful waterhole.

About 50m downstream was a waterfall dropping 30m or so down to the river. It was a beautiful spot for happy hour. I’d left dinner rehydrating in a ziplock bag underneath my hat. Unfortunately the crows were smart enough to find it so on return from happy hour some of dinner was spread across our sandy campsite. We salvaged what we could and resolved to be more careful of crows in the future. 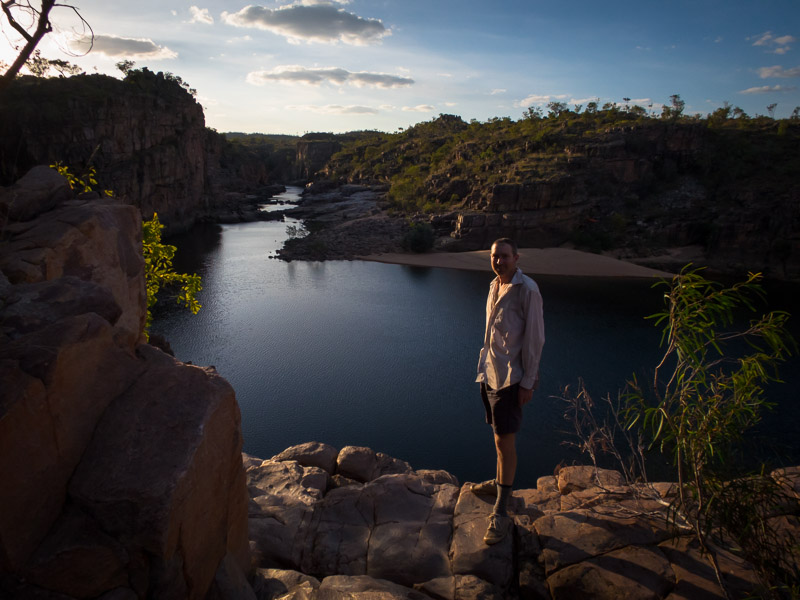 The next morning we dumped everything out of the tent. Tom went off to take photos from the happy hour spot and I went off to the toilet. When I returned the crows had been at it again. My small ziplock bag of toiletries had been dispersed across the sand. Beware of the crows!

I was excited to change gears from bushwalking to paddling. While the bushwalking had been good it was very hot and being on the water would (hopefully!) be cooler. Down we went to the gorge and pumped up our packrafts. 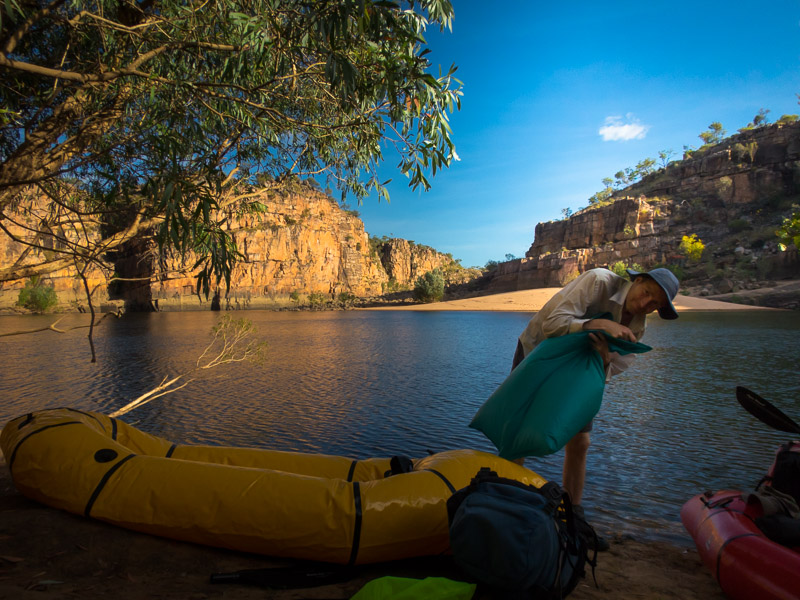 It wasn’t far upstream to the 9th Gorge campsite. We tried to put our packs where they’d stay in the shade and then continued upstream. Today was just about exploring upstream from 9th Gorge as far as we could get. We had a few portages but the packrafts are pretty easy to tuck under your arm so they didn’t take long – particularly since we only had small daypacks with us. Eventually we came to a big boulder block up in the gorge. Tom explored up a little way and concluded there wasn’t much point taking the rafts any further. We continued on foot. 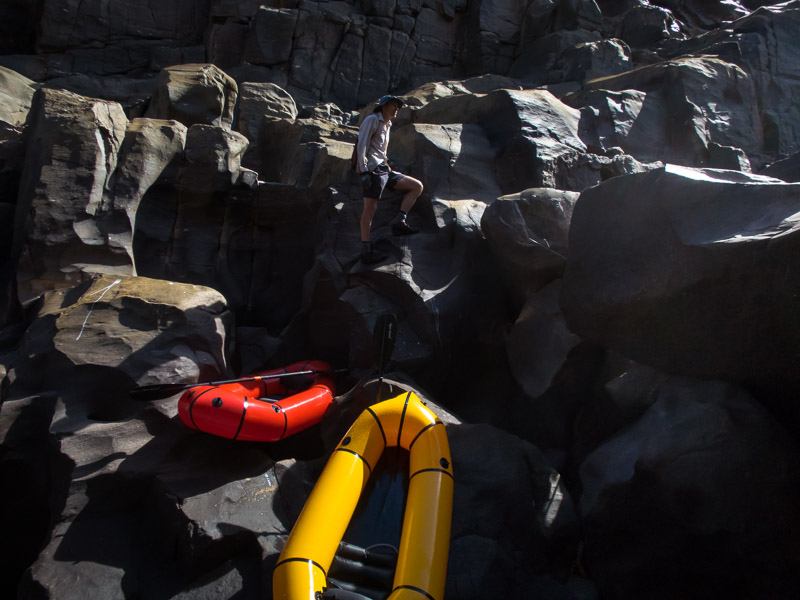 Final stop upstream for the rafts

It was a fun section of river to negotiate on foot. We climbed up to a high point for expansive views. I’m not sure what gorge number we got to – maybe 11 or 12? The remote feeling was somewhat tarnished by the frequent helicopters buzzing around with tourists. They were a constant feature every day – quite intrusive. 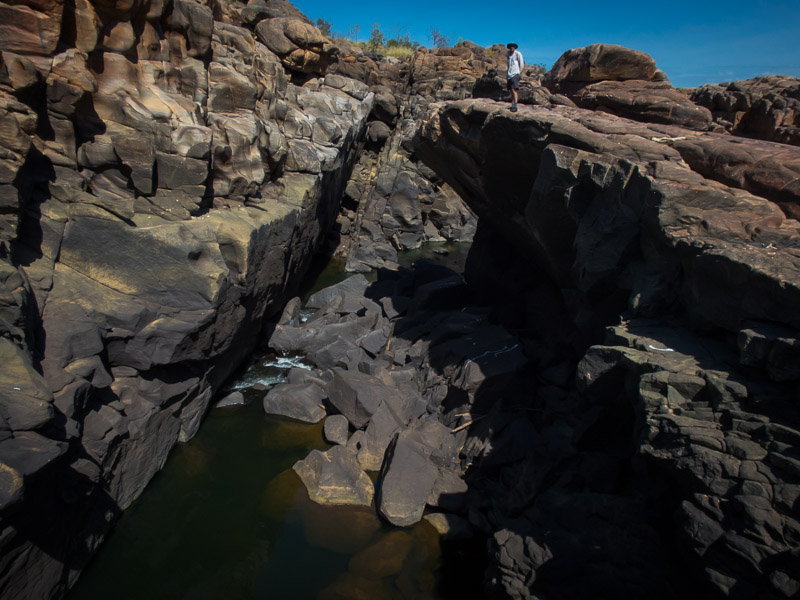 Tom above part of what would be a long portage section 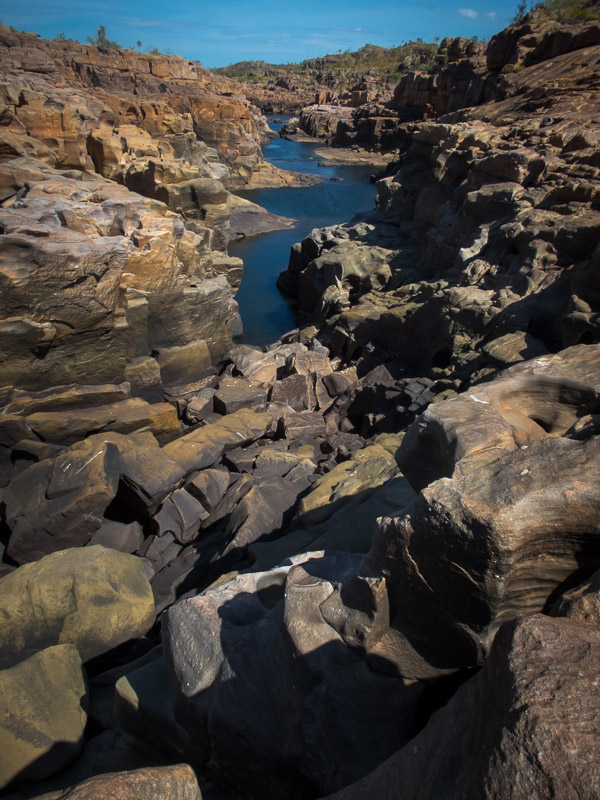 Looking downstream from the boulder block-up. The rafts have been left on the rocks where the water starts in the foreground. 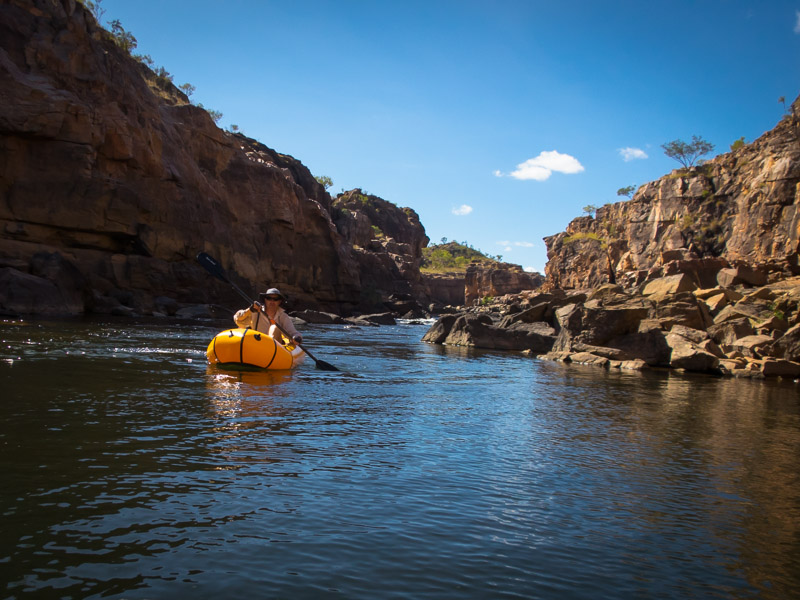 Tom paddling back to 9th Gorge

The 9th Gorge campsite is a big sandbank on the river. It gets full sun most of the day and only has one small tree for shade. We got back mid-afternoon and decided to hang out in the shade on the other side of the gorge until the sun had lost a bit of its intensity. 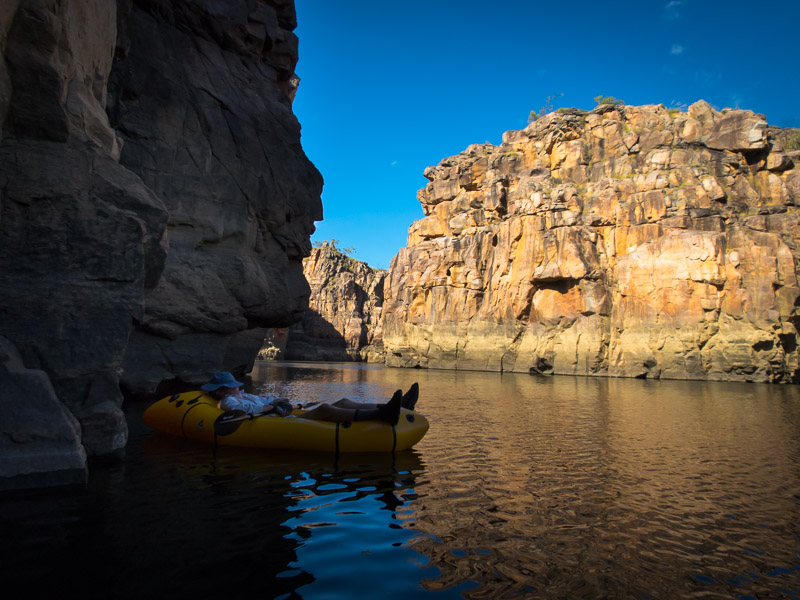 Tom waiting for the sun to go down a bit

9th Gorge Campsite is the only official campsite that doesn’t have a toilet. I guess that means it doesn’t get too much traffic. Climbing out onto the rim in the morning was a good excuse to get some photos. 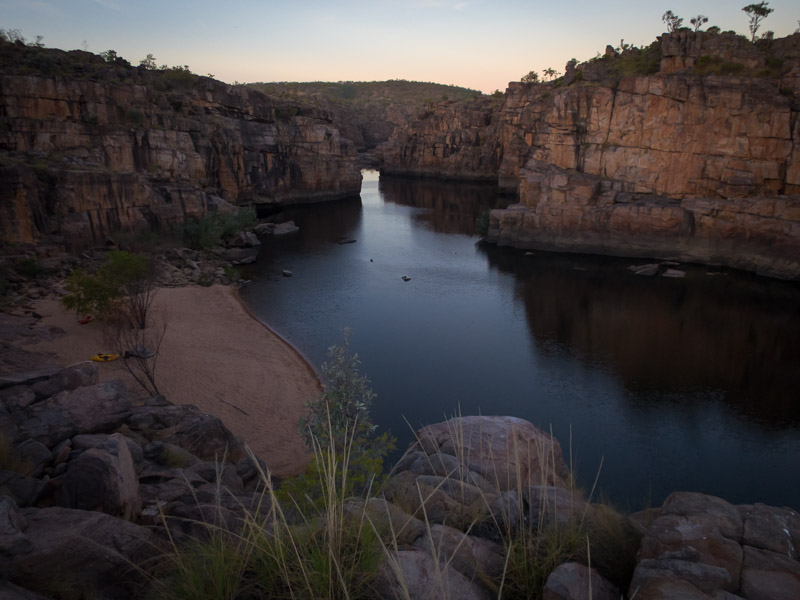 It was a full moon the day we started the walk so we got some lovely views with the moon. 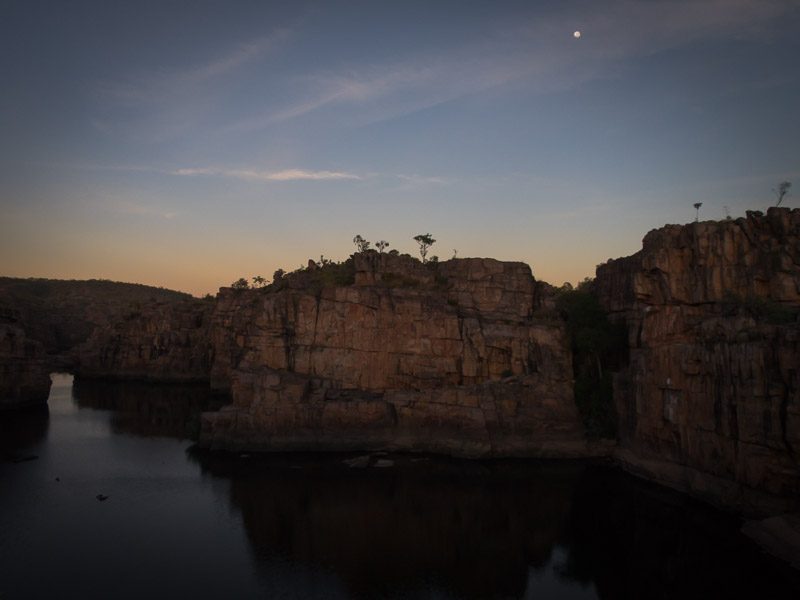 Sunrise from the cliffs about 9th Gorge Campsite

The next day was a short one! We only had to get from 9th Gorge campsite to 6th Gorge campsite. The timings on the official canoeing guide were generous – and on the portages we were a lot faster with our light rafts. We gave ourselves a leisurely start but even so were at the campsite by 11am. If we were planning the trip again I’d either combine our day 3 & 4, or else plan to camp at the canoeists campsite at Smitt Rock on night 4 instead of 6th Gorge. 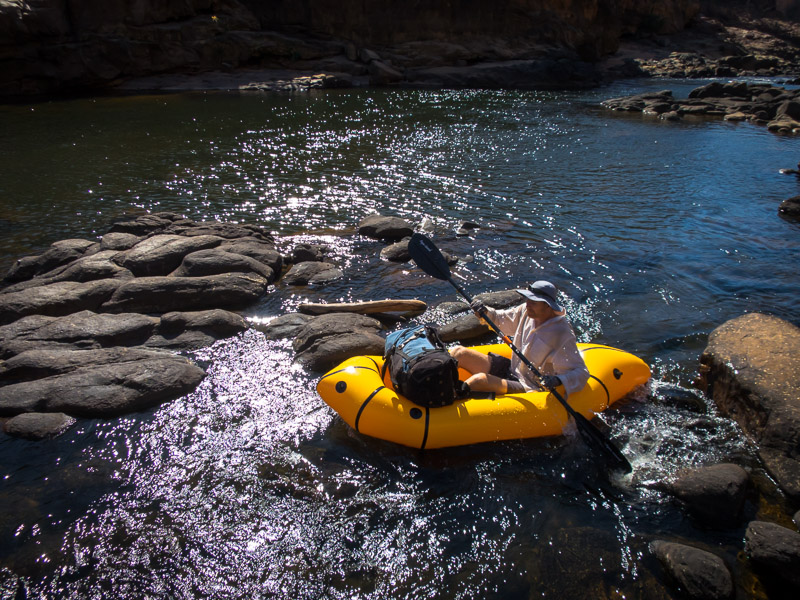 Tom not going anywhere fast on some not quite deep enough rapids.

It had been quite breezy on day 3, and the wind got more intense on day 4. After arriving at 6th Gorge Campsite we had a bit of an explore. There was a small waterfall (or spring?) running at the back of the camp (would have a pool earlier in the season) which was good for drinking water. We then climbed up on the cliffs to get some views down the gorge. As the wind was unpleasant we retreated back to the waterfall and lazed about there for the afternoon where it was a bit more sheltered.

The previous 3 nights we’d had the campsites to ourselves but not long after lunch another couple arrived. They had paddled up from Gorge 2 with a large esky – which meant they were well provisioned. Turned out they run a EPIRB and satellite phone hire business and I had hired a sat phone from them 2 years ago. I don’t think the kayaks were designed to include 2 people and an esky! It was quite amusing to see them return the next day – the esky got a seat in the kayak and one of them sat on the back with their legs dangling in the water. 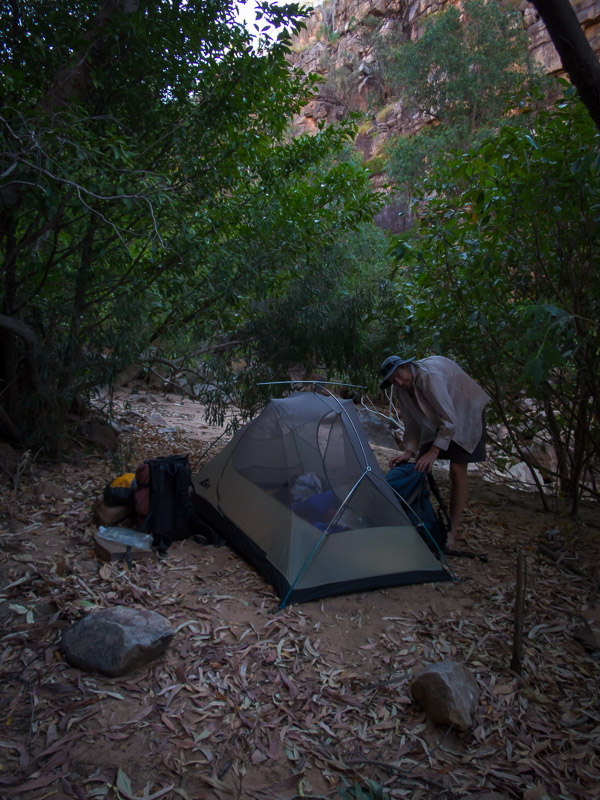 Our last day was bigger than we would have liked. As the National Park no longer allows paddling in Gorge 1 (due to potential saltwater crocodiles) canoeists have to get the ferry out. I’d tried to book a ferry but was told as we had our own canoes we would have to walk out from Butterfly Gorge. I didn’t pursue the reason for that so I’m not sure if there was any flexibility in that policy.

We had an early start which was lovely, there was no wind and some long paddling sections. I spotted a freshwater crocodile sunning itself near Smitt Rock. When we arrived at the end of Gorge 3 it was a bit of shock. Having seen almost no one for 3 days it was like we were in Pitt St Mall! All of the paddlers who had come across on the 7am ferry were on their way up the gorge. There must have been 50 kayaks, plus a couple of tour boats (and don’t forget the ever present helicopters). Fortunately they were all on their way up the gorge so once we passed them it was back to relative solitude. We stopped for morning tea at Butterfly Gorge and enjoyed chatting with a few day walkers. 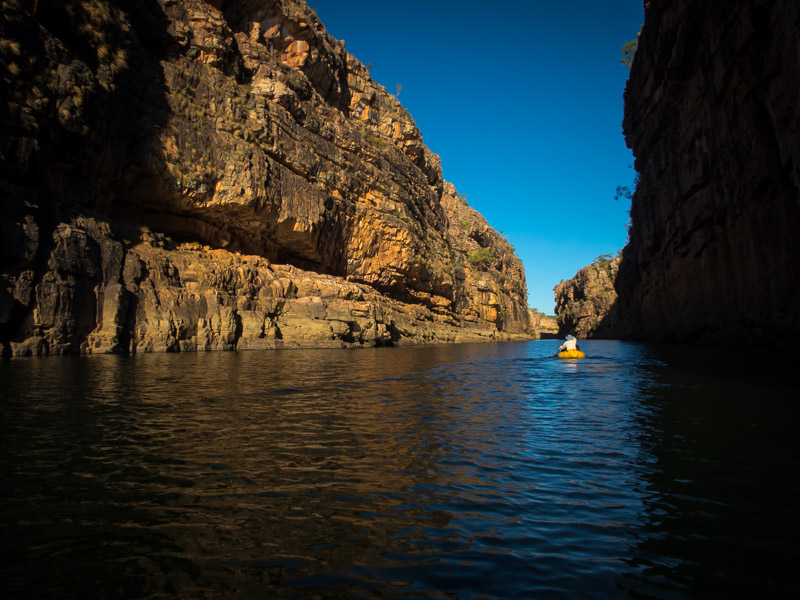 Tom in a long paddling section in Gorge 3

Then it was the final paddling leg to the start of Gorge 2. After drying off our rafts and deflating them all we had left to do was walk out. The ranger we had got our camping permits from told us about an unmarked route we could take from Gorge 2 up to Pat’s Lookout. I’m not sure we followed the exact route she intended but we found our way up a gully and onto the track. We had lunch at Pat’s Lookout and then it was just a few kilometres walk back to the visitor’s centre. A very enjoyable trip.