I think anyone who is vaguely interested in bushwalking in NSW has heard of the Six Foot Track. It is an iconic walk and when I started bushwalking back in 2004 I wanted to walk it. Tom talked me out of the idea, telling me it was predominantly fire trail and I would find it boring.

Some time later I heard you could mountain bike it. “Perfect”, I thought. “That wouldn’t be boring”. Then we walked the section between Megalong Valley Rd and Coxs River – I couldn’t mountain bike that! I’d spend most of the time carrying my bike, so that was the end of that idea.

Then we joined Sydney Bush Walkers and I heard about the annual Six Foot Track in a day walk. Great! I could walk the track without getting bored.

In 2013 I was doing Oxfam Trailwalker. “Perfect”, I thought, “it’ll be a great training walk”. But they were scheduled for the same weekend so that was the end of that idea. In 2014 we were inconveniently swanning around the Dolomites. And in 2015 I had signed up but then had to withdraw as the try-outs for the Australian Women’s Ultimate Frisbee team were the same weekend. Drat.

Finally, we get to 2016, surely I can knock it off! Yet I had done very little walking in 2016 as I had been training for the World Ultimate Frisbee Championships that were held in June. Returning from the World Champs I threw myself into a few training walks to try and get some walking endurance fitness. I was filled with apprehension that the day approached.  I was pretty sure I’d make it but I didn’t think my body was going to be very happy with me by the end. I spent a lot of time thinking about nutrition and not really being sure if I had the right food plan. I photocopied the many sections of different maps so I had the route identified.

The day finally dawned… well actually I was up well before it dawned as we were meeting at the Explorers Tree at 6am. It hadn’t occurred to me that it was still going to be dark. I had my torch ready in case of a late finish, not because we were up before the sun! There were 25 walkers this year, along with 7 support crew. It was a little like herding cats with everyone milling about in the dark, trying to work out which car to put their bag in and what layers to have on to start walking. After a briefing by Robert and the traditional round of names (though I doubt anyone was going to remember 31 names, especially given it was dark!) we were off by 6:15am. The group spread out fairly quickly with the descent down Nellies Glen. 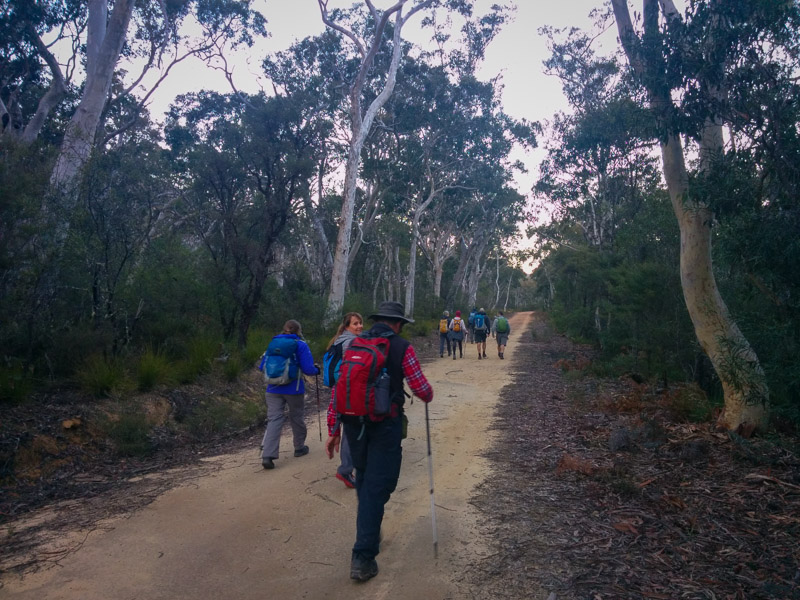 It wasn’t long before we were all together again at our first support stop at the Megalong Valley Road enjoying a cup of tea or coffee. 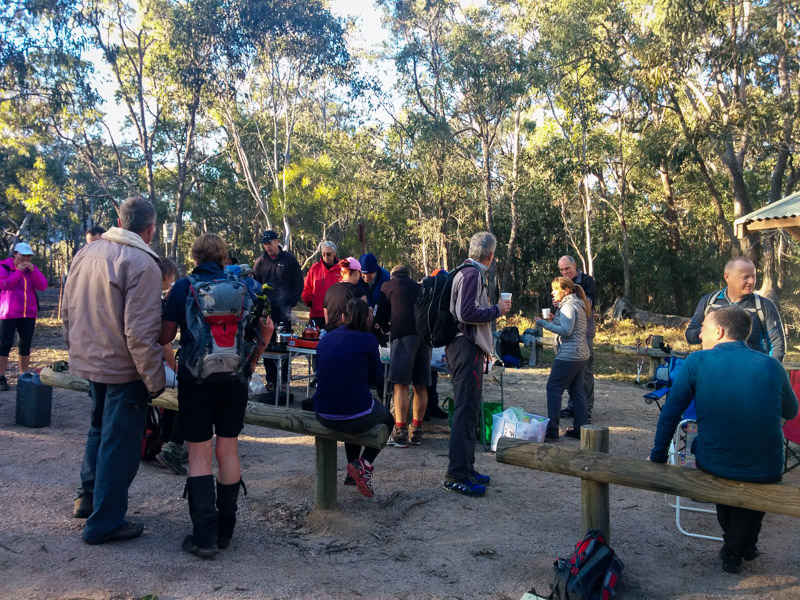 The next section through to our morning tea stop (unsupported) at the Coxs River Campground was one of the most picturesque. 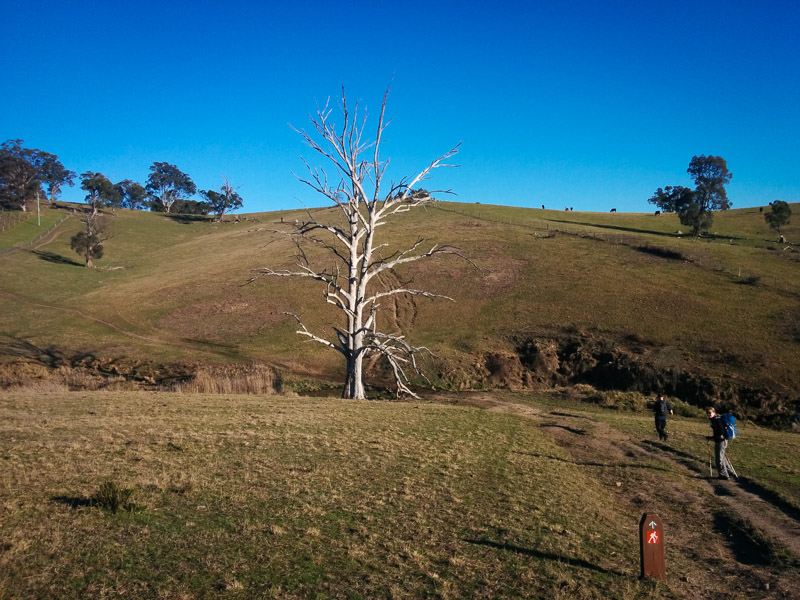 It was a beautiful day, perfect walking weather and the time passed quickly until we got to Bowtells Bridge. As the Coxs River was flowing strongly from a lot of rain in the preceding weeks we were crossing using the bridge. Only one person can use the bridge at the time, so there was a small wait as we got everyone across. 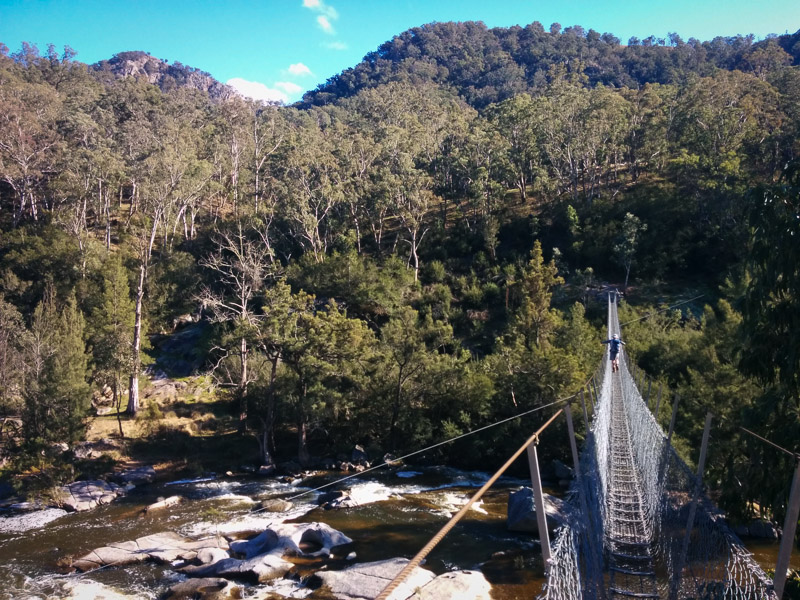 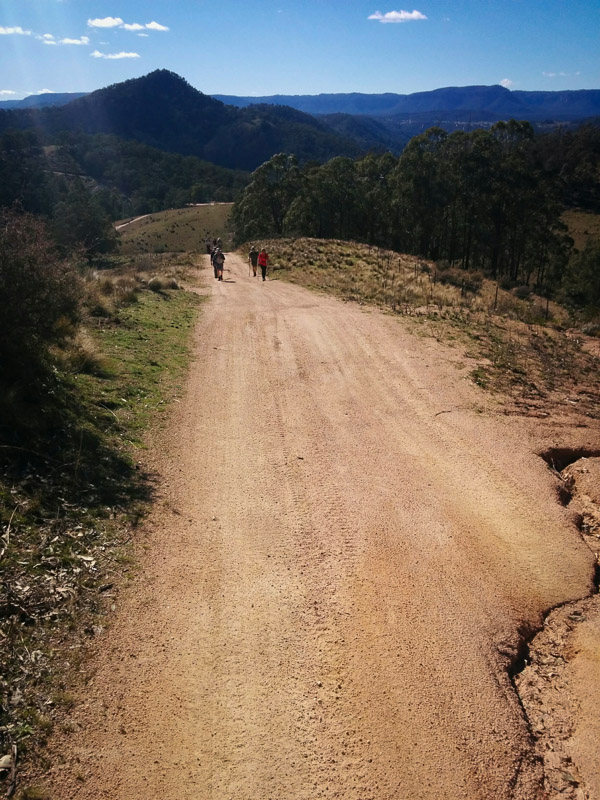 I’d been vaguely thinking if this walk went well I would try K2K in a day so I used the ascent to push myself. This meant I was third to the top at 11:50am and soon tucking into more coffee from our wonderful support team and inhaling lunch. 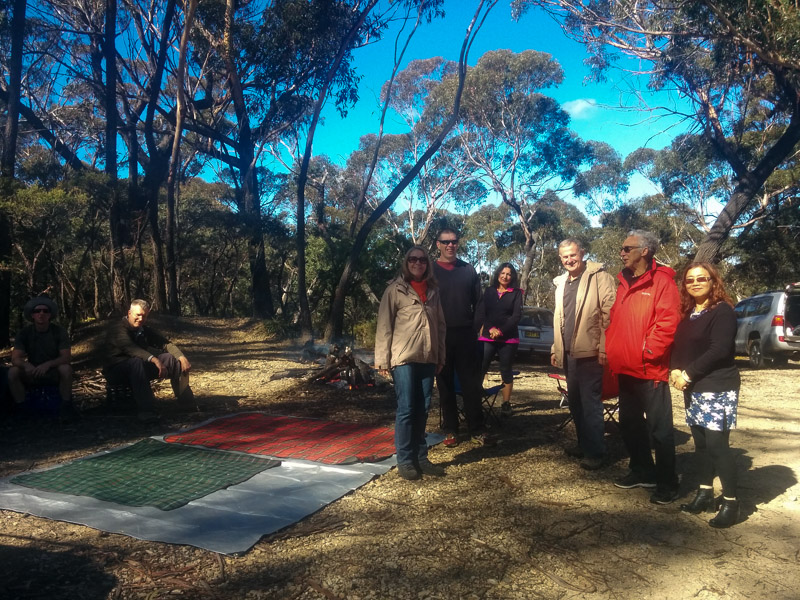 I’d not eaten (or drunk!) much so far on the walk so it was good to get some food in. It was not great to see there was only about 0.5litres of my 2l bladder gone. I made myself drink half a litre of water before I could start the next section. As I’d got to the Pluviometer earlier than many people I was ready to set off before most. I was hoping some others might join me but I was the keenest so off I went. 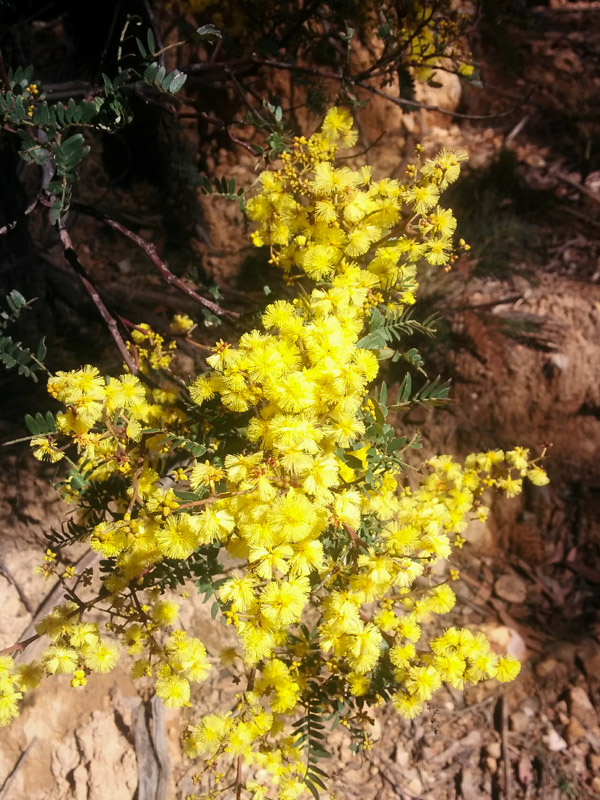 The fire trail along the Black Range passed quickly. I enjoyed using my map and compass to work out which bend I was on and estimating the time it would take to get to various landmarks. The support crew drove past me just as I got to the 15km to go marker. 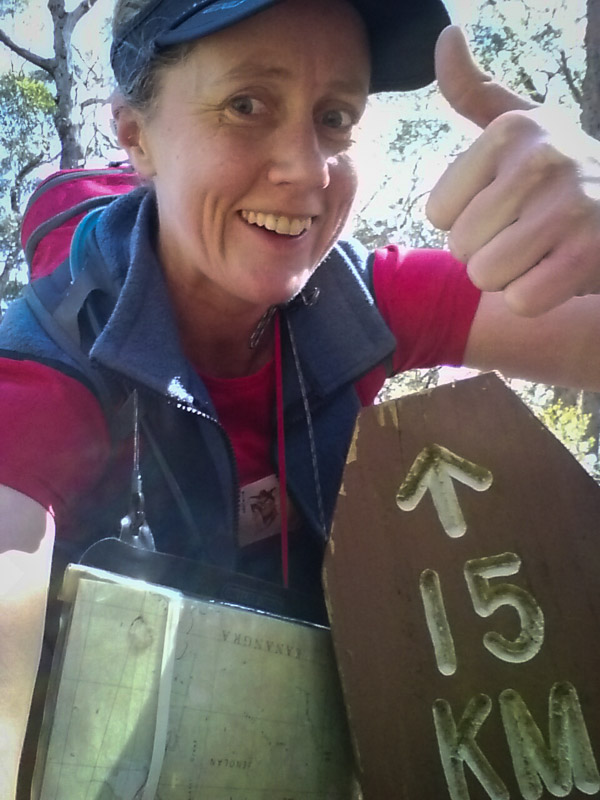 It was good to know I was two-thirds of the way there and my body was feeling good. I got a bit of shuffle on in some of the downhill sections and before I knew it I was at the Black Range Campground at 1:50pm. My fluid intake hadn’t improved so I gladly downed a couple of glasses of orange juice from the support crew. The temperature had plunged and it was quite chilly sitting round and stretching at the rest stop. I needed to either put a bunch more clothes on or get walking again. I decided on the latter. 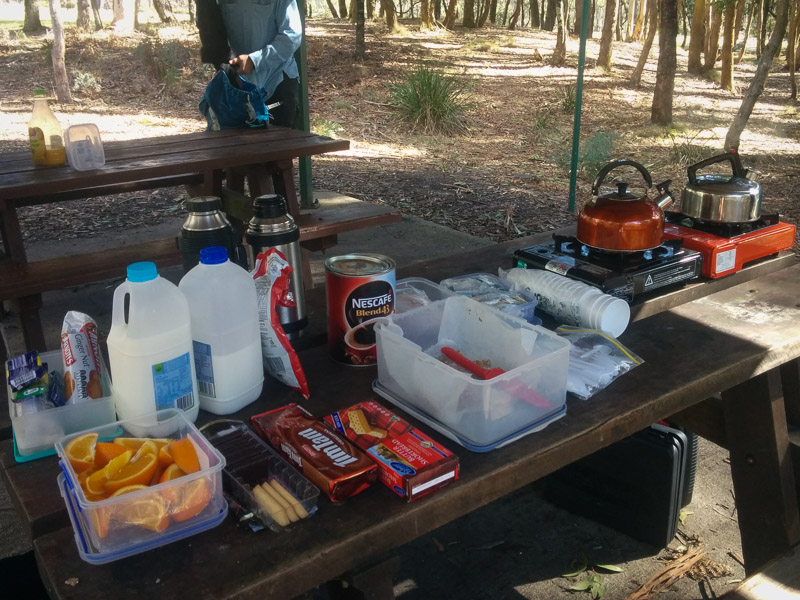 I’d been told it was all downhill in the final section so it was a rude surprise to find a couple of short, sharp uphill sections but at least I warmed up pretty quickly! I was also pleased to find that the 4km from the Black Range Campground didn’t parallel the main road – which is what the NPA notes had implied. I had a brief chat with a couple who had been playing the ukulele and singing at our rest stop before passing them. I was now on a mission to get to the end. 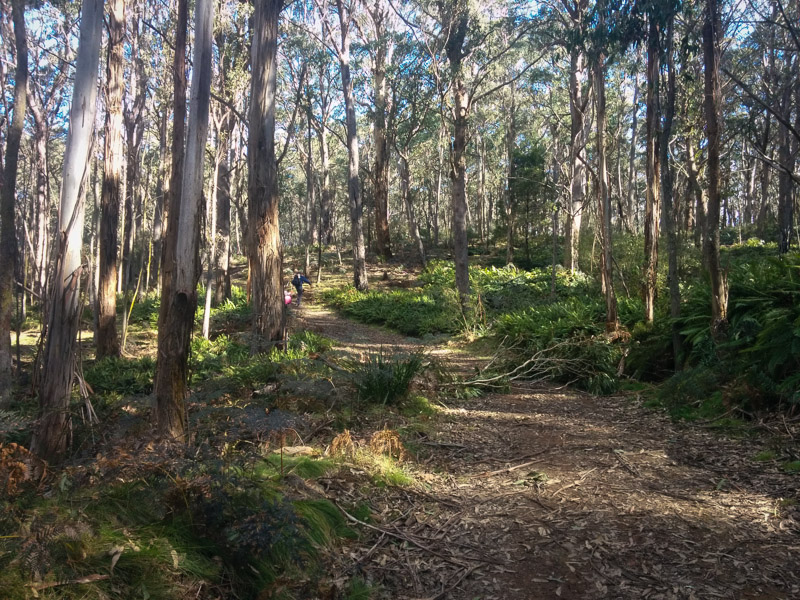 Apparently in previous years some of the group would run this section so I tried to jog where the terrain allowed. Not so fast that I didn’t see this lovely echidna on the side of the track. 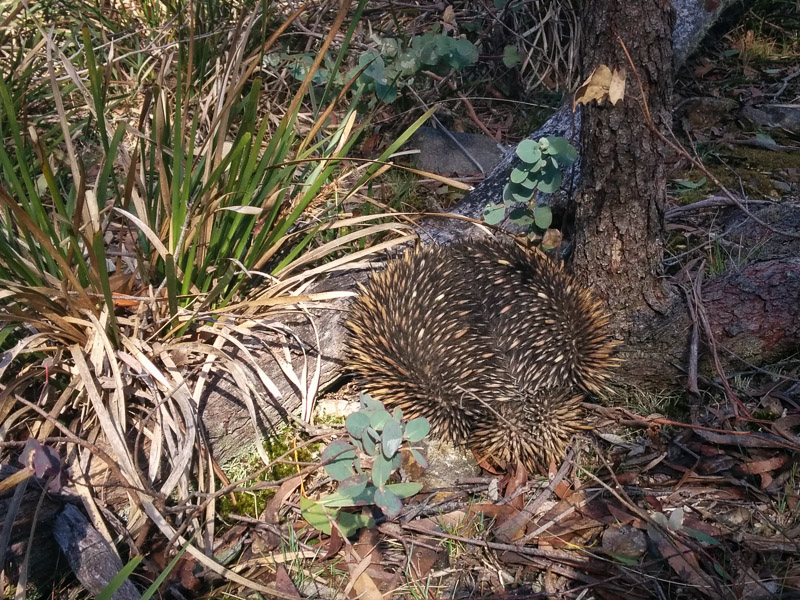 The fire trail turned quite rocky near the turnoff to Mt George and I couldn’t safely run, but further on the foot track turned to smaller gravel and I was able to jog again. Not having done the route before I was surprised and impressed when I got to Carlotta Arch. I started meeting tourists walking up from Jenolan Caves. I must have looked like a bit of mad woman with my map around my neck, holding my walking poles, jogging down the hill. It was 3:40pm when I stepped into the reception at Caves House feeling pretty good… so that means I might have to contemplate K2K in three weeks time. The other walkers arrived over the next hour or so all pleased to have made it.

Having now done the Six Foot Track after so many years of contemplating it I can say it was far more enjoyable that I was expecting it to be. Yes, there is a lot of fire trail but it is pleasant surrounds and nice views. It was a great day, big thanks to Robert Carter for organising everything and to our support crew for making sure we were well looked after.