Continuing from Part 1… From Yunomine Onsen the next morning I caught the bus to Ukegawa to start the Kogumotori-goe section of the walk. I initially got on the wrong bus. Fortunately I realised my error and was able to get off while still on the same route as my intended bus so there was little harm done other than my embarrassment. I was fortunate that a couple who had stayed at the same minshuku as me the night before were able to communicate with the bus driver for me – many thanks to them.

Today was the easiest day of the trip, and also the best weather. It was blue skies and quite warm (18°C+).  There were so many people waiting at the bus stop in Yunomine Onsen I was sure there would be a few of us on the track but I was the only one who got off at my bus stop. Consistent with previous days I only saw 2 or 3 people all day.

The day started with a pleasant ascent of 400m on a very gradual incline, and then followed the ridge for most of the day. The track had less formed stairs/cobblestones then other days so it was pleasant underfoot. Additionally there appeared to more sections of natural forest rather than the frequent planted cedar forests in other sections. 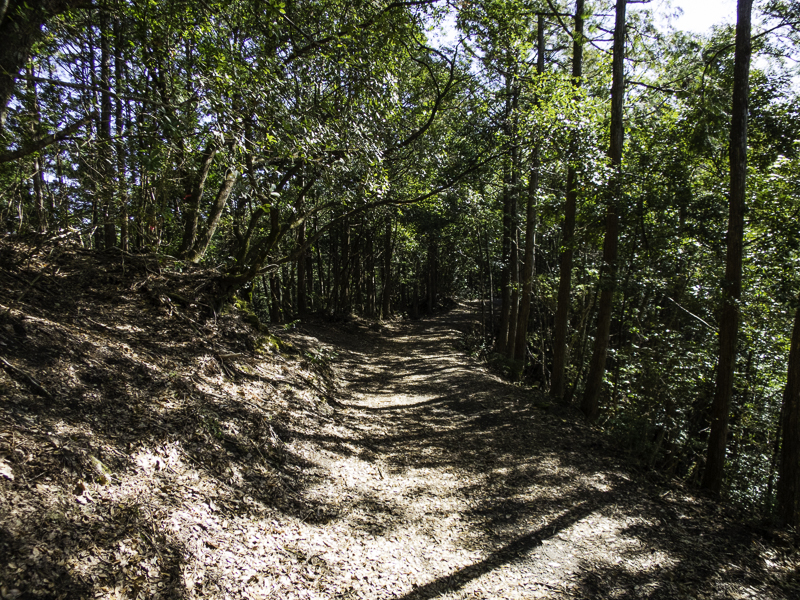 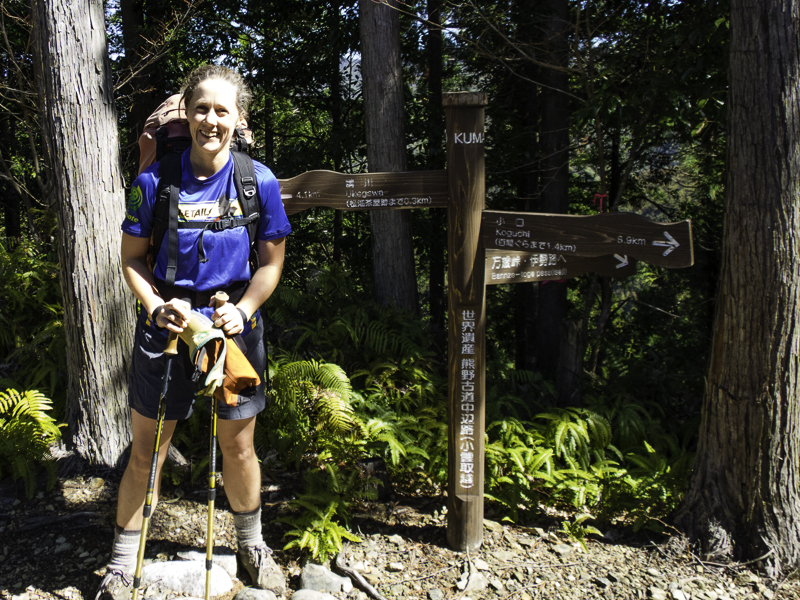 In shorts & t-shirt for the first time of the trip! 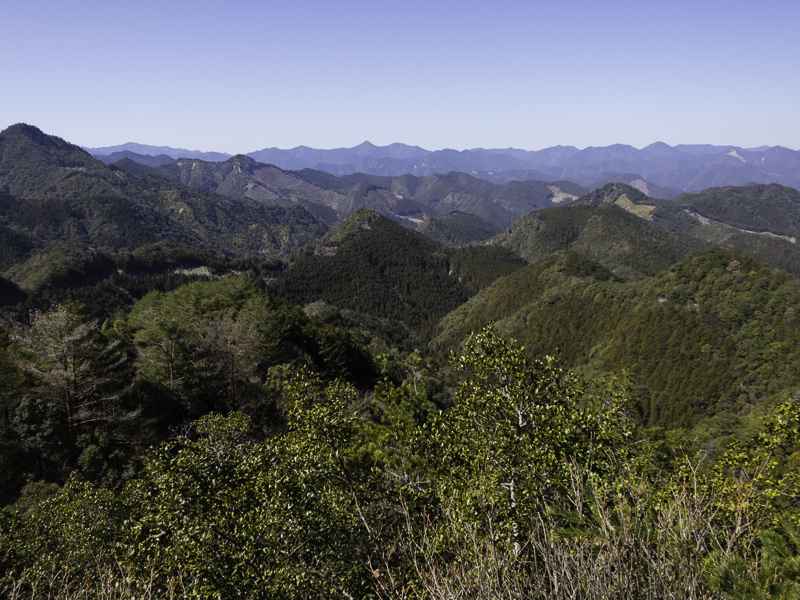 Morning tea views of the “3600 peaks of Kumano” 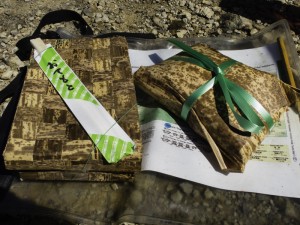 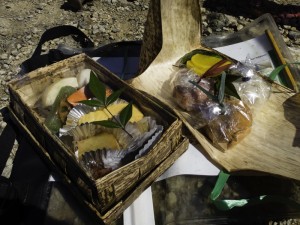 I had a leisurely morning tea break at the Hyakken-gura lookout, and an even more leisurely lunch at the rest stop at the Sakura-jaya teahouse remains. Even with that I got to Koguchi around 2pm. 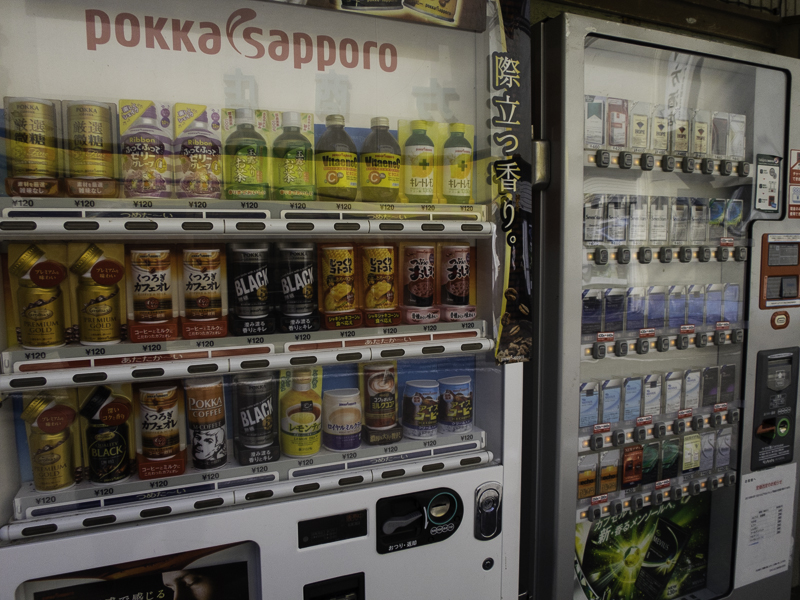 A vending machine for every need in Japan (yes, those are cigarettes in the right-hand one)

Of course there was a vending machine in this small village, so I had an ice coffee and sat in the sun until 3pm which I figured was an acceptable time to check-in. Most of the minshukus had published check-in times between 3-6pm on the Tanabe Tourism website, but I hadn’t been able to find a check-in time for Minshuku Momofuku – as it turned out it was 2pm.

Today’s section had reminded me of walking a section of the Great North Walk in Sydney – short and pleasant, with views somewhat like the Wild Dogs in the Blue Mountains. I was surprised it was rated a 4/5 in the difficulty stakes as the ascent and descent were both very gradual, and the section was reasonably short. I concluded a large weighting must be given to the inaccessibility of the track – as there were no facilities or easy opt-out options during this section. 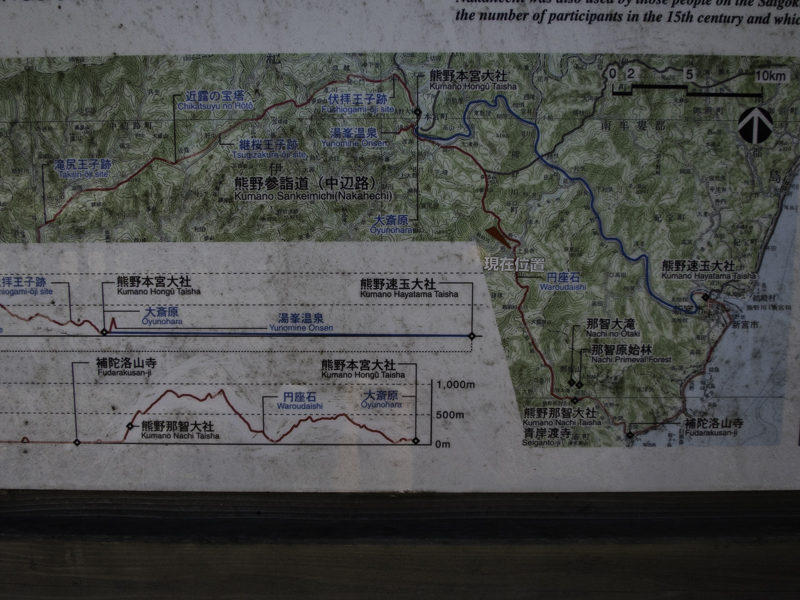 The closest I got to a topo map of the trip 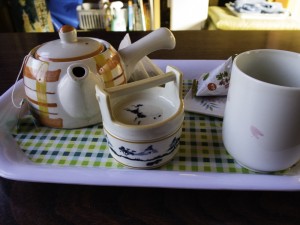 Most minshukus provided tea / or tea making facilities in your room

The last day was rated as a 5/5 in difficulty and I was intrigued to see what it was like. I’d been keeping a close eye on the forecast and my fine weather window was closing – rain was due that afternoon and I was keen to avoid descending cobble stone/rocky stairs in a downpour. With that in mind I headed off immediately after breakfast just after 7:30am. 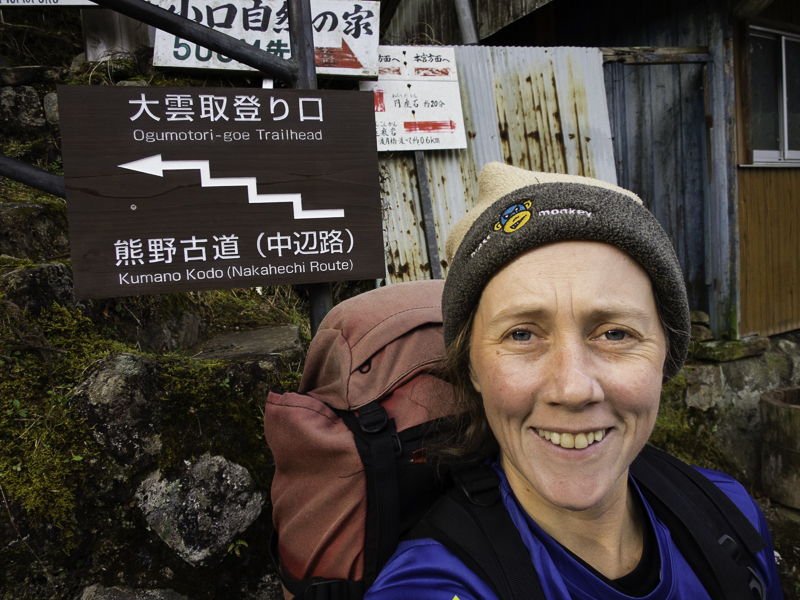 An early start on Day 4

The Ogumotori-goe route starts with an 800m ascent in 5km, going up continuously the entire time. 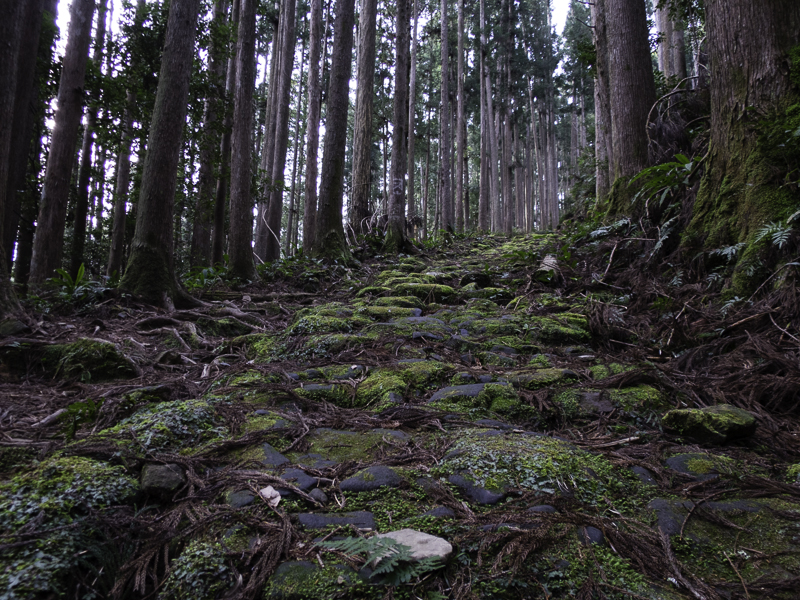 I’d guess over half of the ascent is on stairs, and there are a number of false summits which raise your hopes along the way. 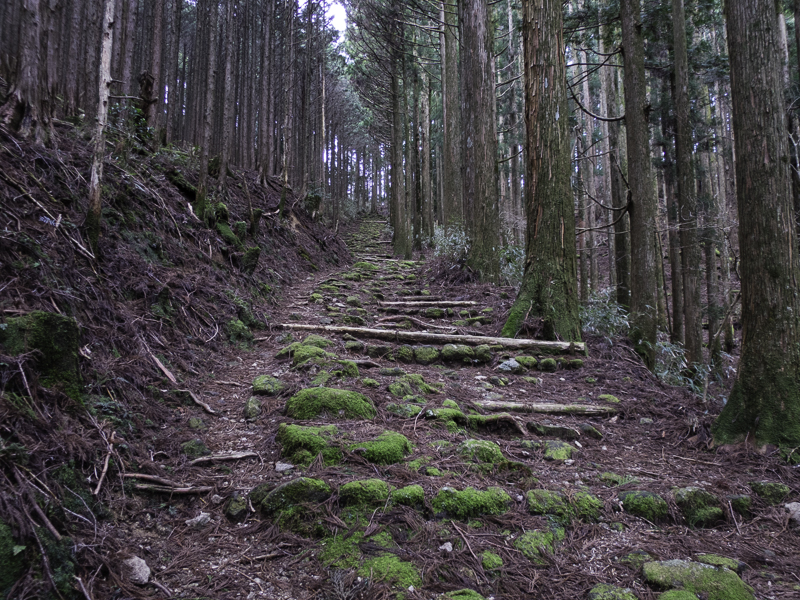 I was sure the pass was going to be at the top of this section of stairs. Wrong! Another 30 minutes later I made it to the top.

I had been a bit lazy with my stretching the previous night after such a cruisy day and my knees were paying for it. 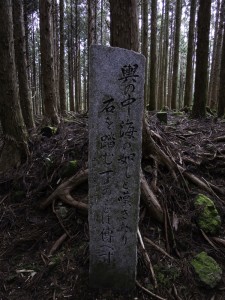 After 2 hours of solid climbing I made it to the pass, from which there was an immediate 140m descent. 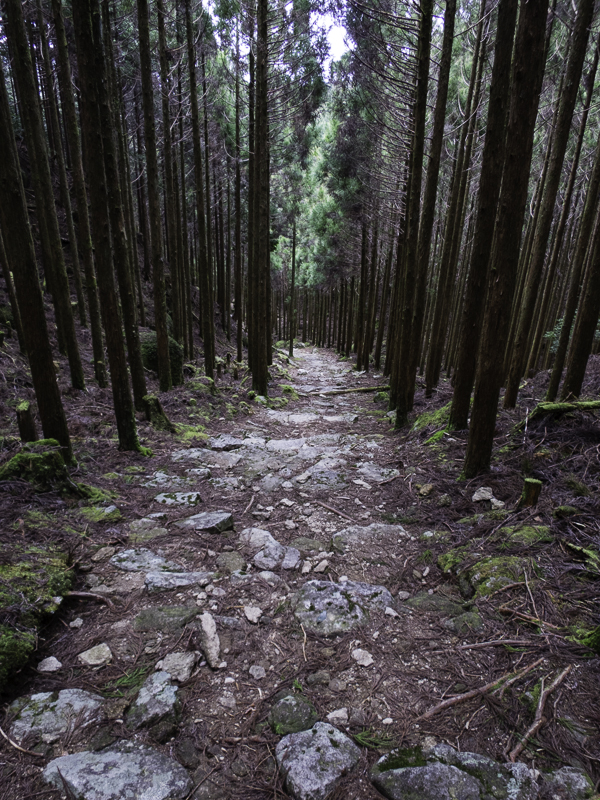 It was during this descent I encountered the only real wildlife I saw in the four days – two deer grazing. 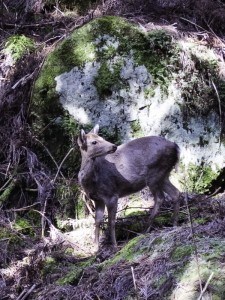 1 of 2 deer, and the only wildlife I saw besides a lone squirrel 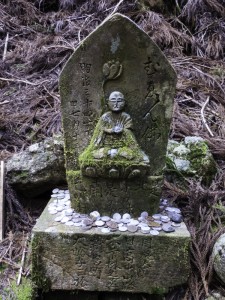 The route then meandered up and down a number of 100-200m ascents/descents along the ridge before getting to a great lunch spot. There were fine views of the Eastern coastline though the weather had started to turn and by the end of lunch I was wrapped up in many layers. 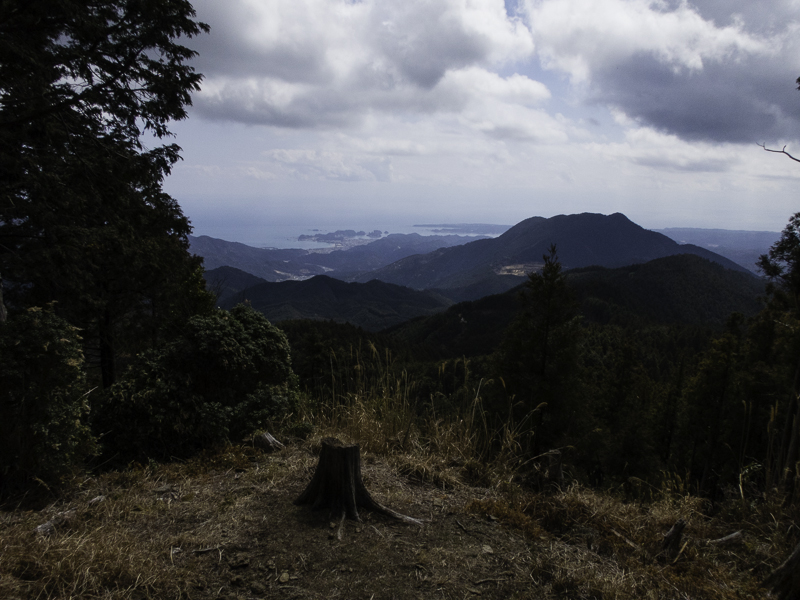 Views of the Pacific Ocean from lunch at Funami-Toge Pass 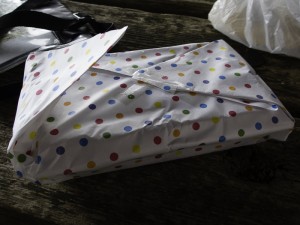 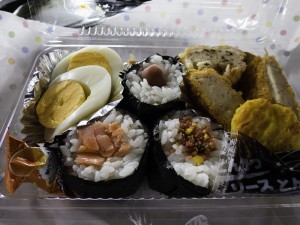 My favourite lunch of the trip 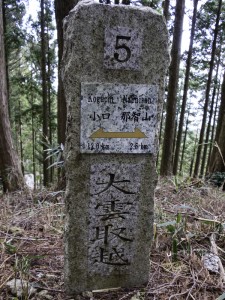 There were 500m markers along the entire route. 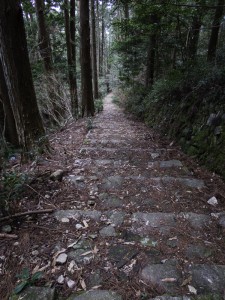 part of the 500m descent

My knees were stuffed. Little did I know how many more stairs still lay ahead in my day. Somewhat foolishly I wandered directly to see the three-tiered pagoda and Nachi-no-Otaki falls, not realising that the area is fairly vertical. I would have been much better to explore the top section where I had arrived first. By heading down immediately I was later compelled to walk back up the stairs to the top. Nachi-no-Otaki falls are the highest waterfall in Japan at 133m, it is also 13m wide but when I arrived it didn’t appear to have much volume. 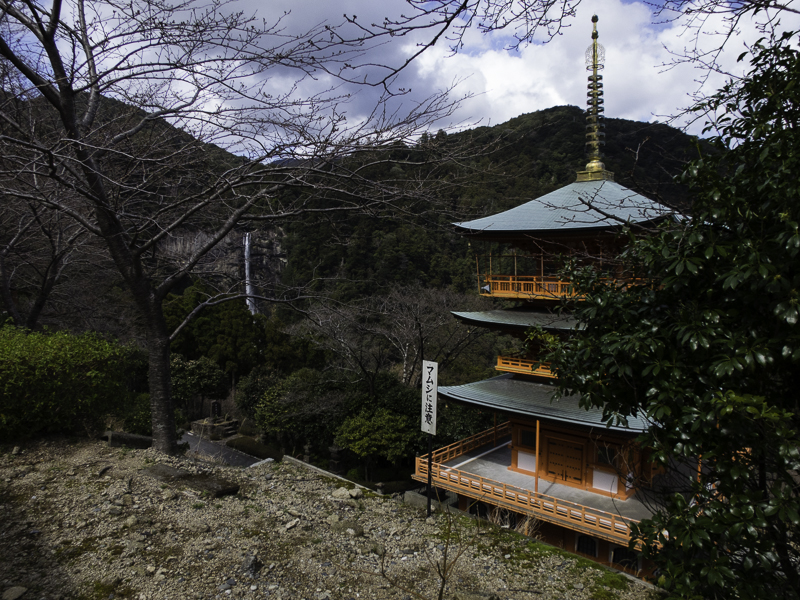 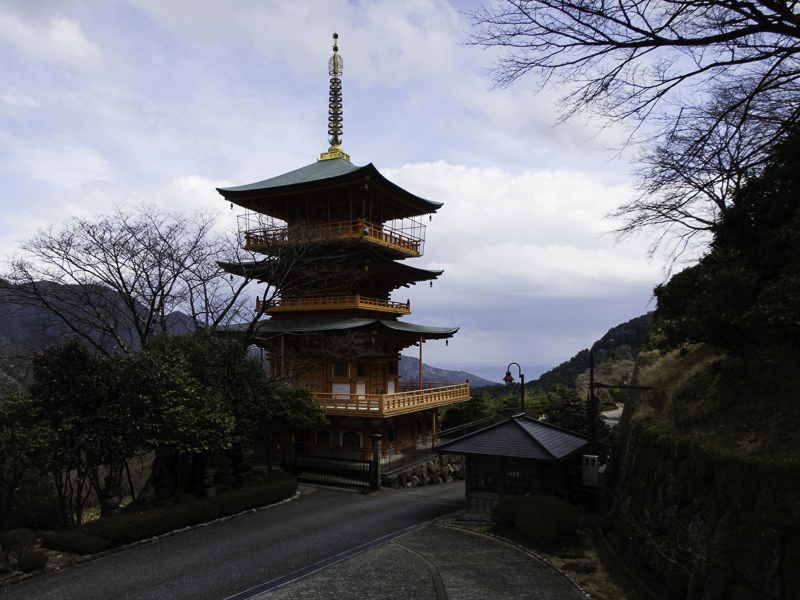 Three-tiered pagoda, looking out towards the ocean 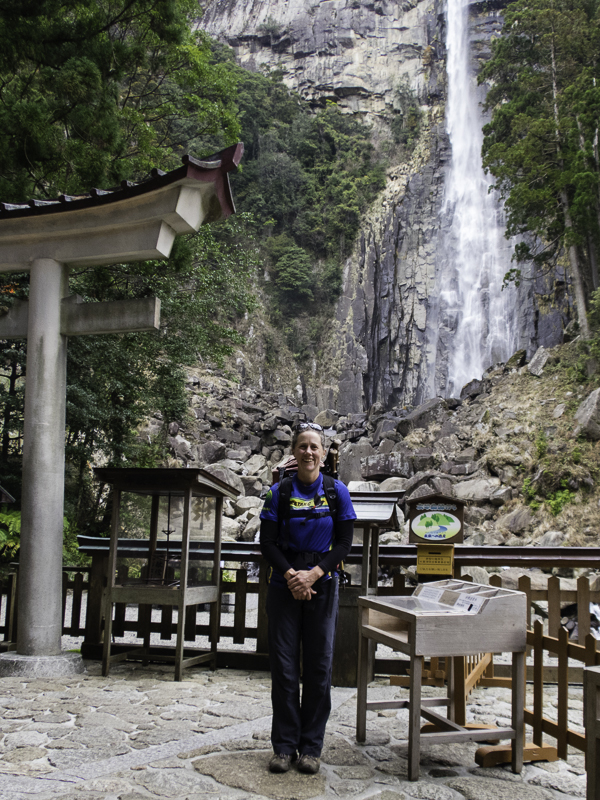 At the tourist-trap area of Nachi-no-Otaki 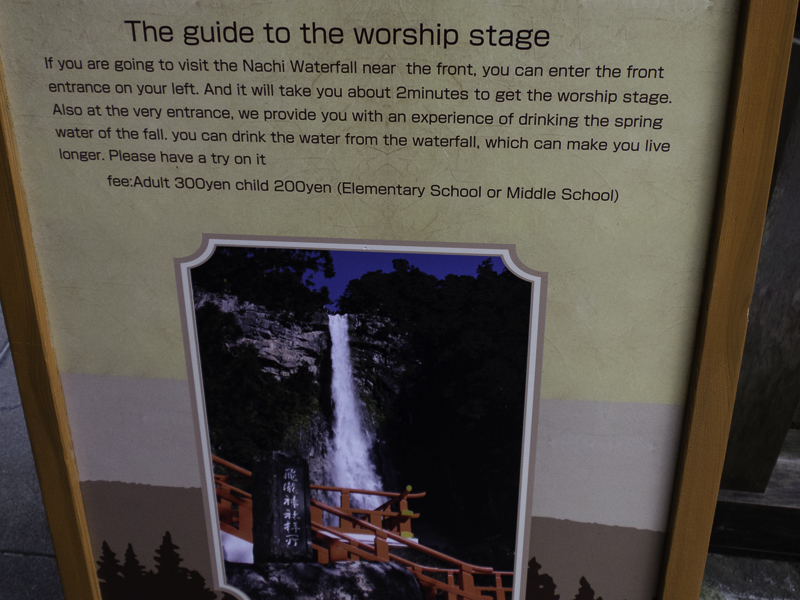 Sadly I didn’t try to extend my life…

The final (optional) section of the Nakahechi route was Daimon-Zaka which is a 600m cobblestone staircase at Nachi surrounded by some seriously big Cedar trees. After dropping my pack off at my accommodation for the night I set off to walk Daimon-Zaka for completion’s sake. 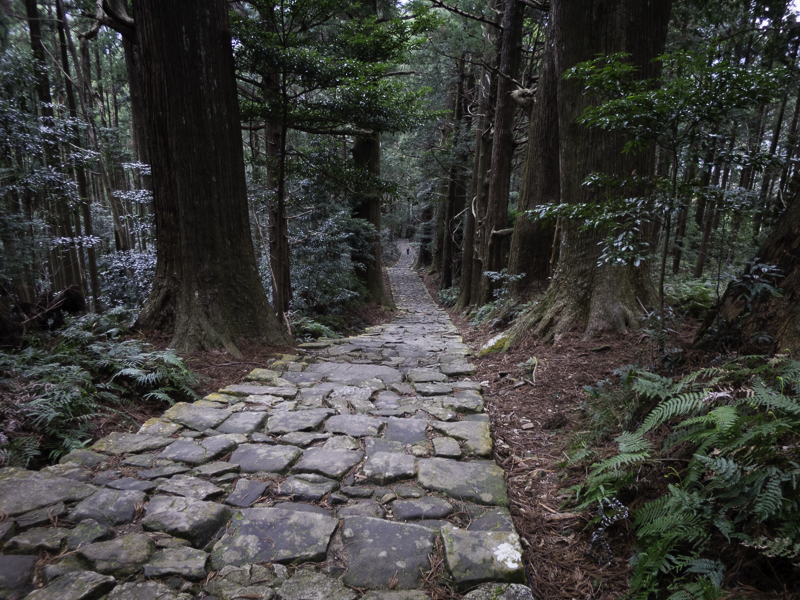 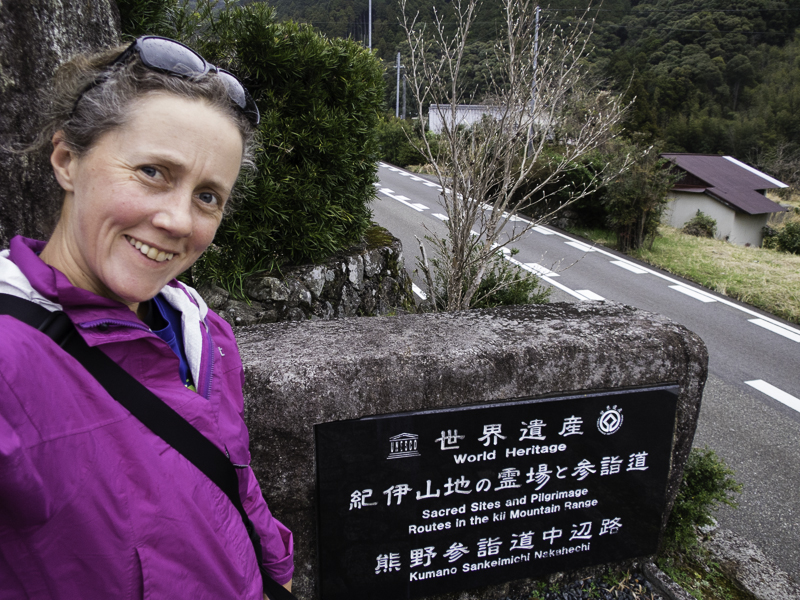 The start of Daimon-Zaka and the end of my Nakahechi Adventure!

The forecasters were spot on as the rain moved in just before 3pm. After walking stairs for another hour I decided that was enough and it was time to call the end of my Kumano Kodo adventure. 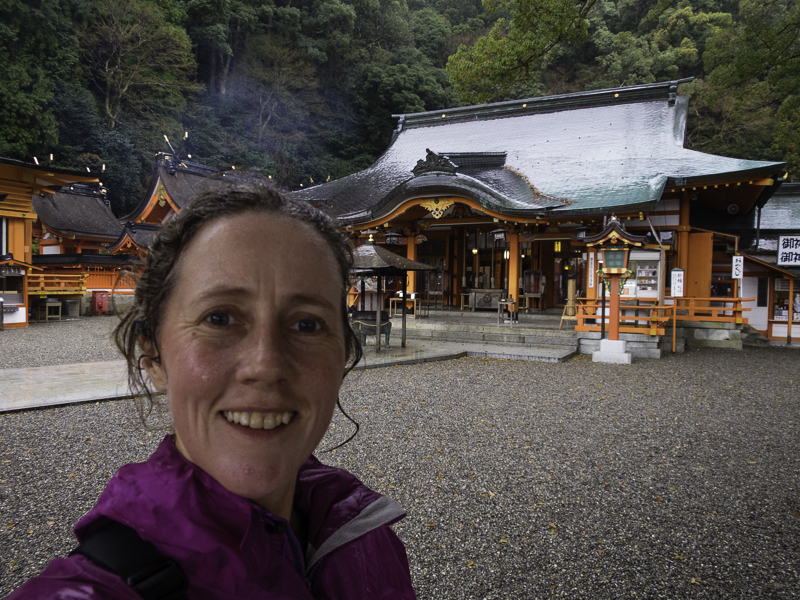 Back up to Kumano Nachi Taisha grand shrine (in the rain) 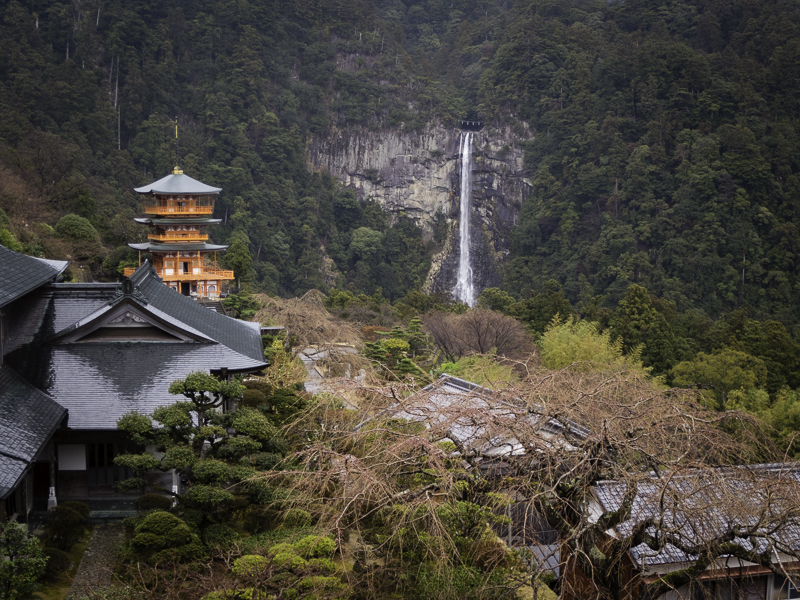 Bathing time didn’t start until 4:30pm so the moment it was 4:30pm I was down at the baths looking forward to a long soak to ease my body after the hardest day of walking of the trip. Unfortunately my soak was interrupted. When I went to bathe I see a sign saying “women” I was about to walk in but then noticed the blue curtain with a man on it, so I turn around and there’s another door which also says “women” but this one has a red curtain with a lady on it. Figure the red curtain is the one to go… Have my wash and I’m soaking in the bath when I hear someone else changing, always a bit nervous in case I’m doing something wrong. As the person is coming into the bath room I am slightly horrified that it is an elderly Japanese man. He doesn’t appear to immediately notice that I am not a man. He speaks no English and I speak no Japanese (or certainly none for this situation!). Eventually he retreats, presumably having just read the first women sign and not noticing the curtains. That would be well and good except it turns out we are the only two people staying at our lodging and we have to eat dinner together. I think he apologised a number of times… 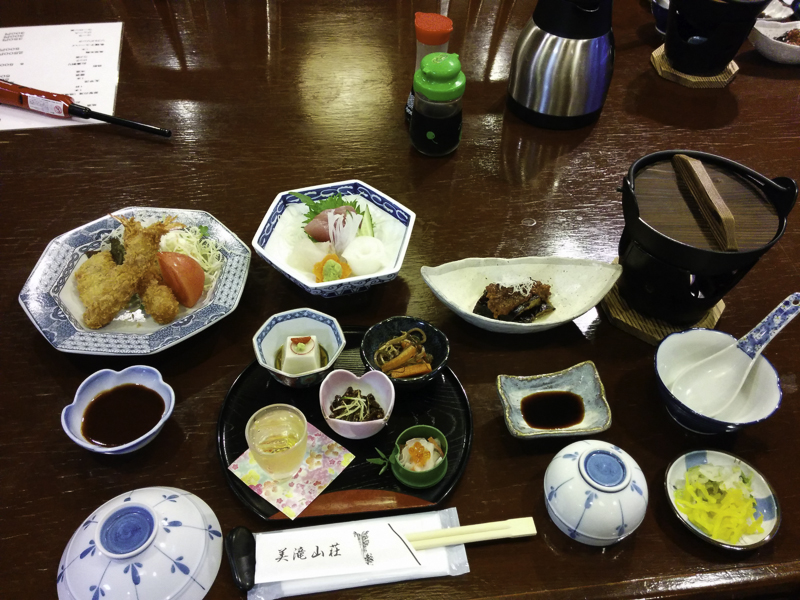 The only time I used my Goretex in the trip was walking to the bus stop the next morning. It had rained constantly all night and was still bucketing down when I left. I was really glad I wasn’t going walking that day. Nachi-no-Otaki falls looked far more impressive after a full night of rain. 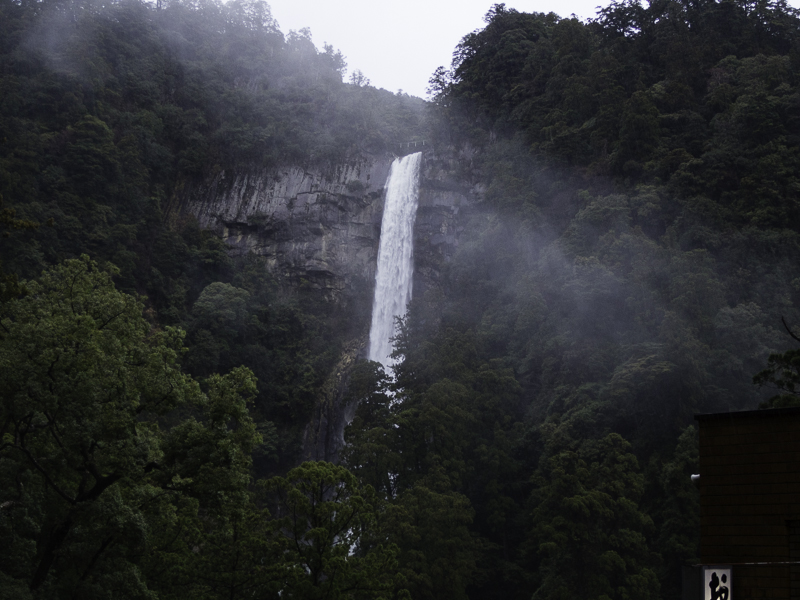 Nachi-san after a full night of rain