Explorers Brook had been one of those canyons that had been on our agenda every summer for as long as I had been canyoning. Several years ago I’d been on a trip where we only got through some of the upper sections (unclear what we were aiming to achieve that day?), and Tom had separately visited some of the upper creek. We were scheduled to do Explorers Brook on a club trip last summer but due to illness and injury had missed out.

I was quite surprised when Tom suggested Explorers Brook for the coming weekend. I’d been angling to do it for the last couple of months and he’d never seemed that enthusiastic, citing the need for a car shuffle as a major impediment. Yet, despite having no capacity for a car shuffle, and Tom still recovering from a few injuries he’d picked up on our post-Christmas Coorongooba trip it seemed that it was the go. Fortunately these days we frequently do overnight canyoning trips, so preparation comes easily, despite little planning time it was easy to throw together our gear on Friday night.

The car shuffle concerned me, and I suggested we were better off dealing with it on Saturday morning then on Sunday afternoon. Tom was relaxed; we would just be able to hitch a ride on Bells Line of Road… and if not it was only a 6km walk to Mt Banks! We then discovered a friend was canyoning in the area on Sunday and on Saturday morning while en route to the canyon we tried to make arrangements for him to relocate our car. North Richmond is a common meeting point for canyoners and when we arrived there on Saturday a large group from our club were also there, preparing to do Bowens Creek South. Some quick thinking and we managed to sort out a car shuffle on the spot. Sweet! Except that if for some reason we had to bail out from the trip early on the first day (potential given Tom’s injuries) then our car was nowhere near by.

It was windy and not overly warm when we left the Mt Banks car park. We decided to go in from the North, off track, rather than taking the southern fire trail. We were hoping the ridge would be reasonably easy going, and the scrub wasn’t too bad. As we got onto our minor ridge where we were planning to drop into a side tributary we were surprised to find a large rock arrow (1m+ long) pointing down the ridge – a far more elaborate marker than the usual cairns. Someone had clearly spent a lot of time constructing it, and for what purpose? 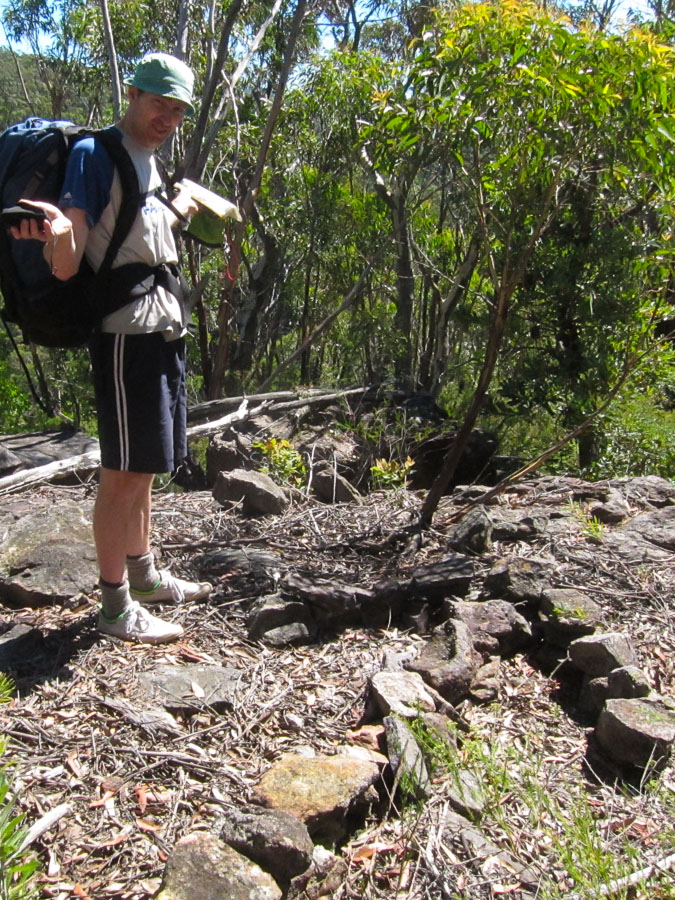 A couple of dodgy scrambles and we found ourselves in the side tributary. We had morning tea in a pleasant overhang before finding ourselves in Explorers Brook. I recognised some of the earlier sections from my trip back in 2008, but soon we were into unknown territory. 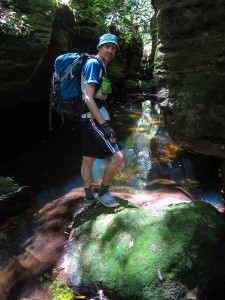 The creek was pleasant and very canyoniferous without really being canyon. We had put our wetsuits on when we hit the first swim, but they weren’t necessary for much of the morning’s walking. It was a warm day and we probably would have been better off leaving them off until we stopped at the main drop in the creek for lunch. We’d seen photos of parties abseiling on the true right, as well as down the main drop so knew we’d have options for our approach. Tom found a sling on the true left so we decided to head down that way. 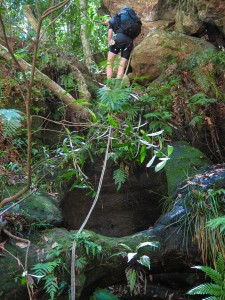 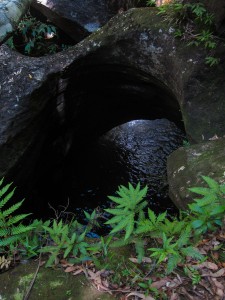 From the bottom of that short abseil it seemed a long way to the bottom! I was concerned our 20m ropes might not reach and we might need to change tack and head down the right-hand side. Tom threw our second rope, while leaving our first in place, to see if it reached. We couldn’t see the bottom. Hmm. I didn’t really fancy testing it as it would be a long prussic back up. And Tom still having a hand issue from a slip a few weeks earlier was unlikely to want to prussic either. 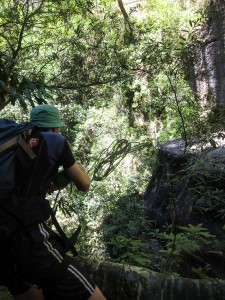 Fortunately on the second throw I could see the rope hit the water (not much to spare), so we rigged from where we were. The top of the waterfall was full of beautiful arches of varying sizes – though difficult from our position to photograph. 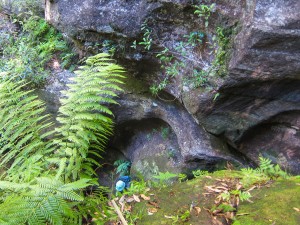 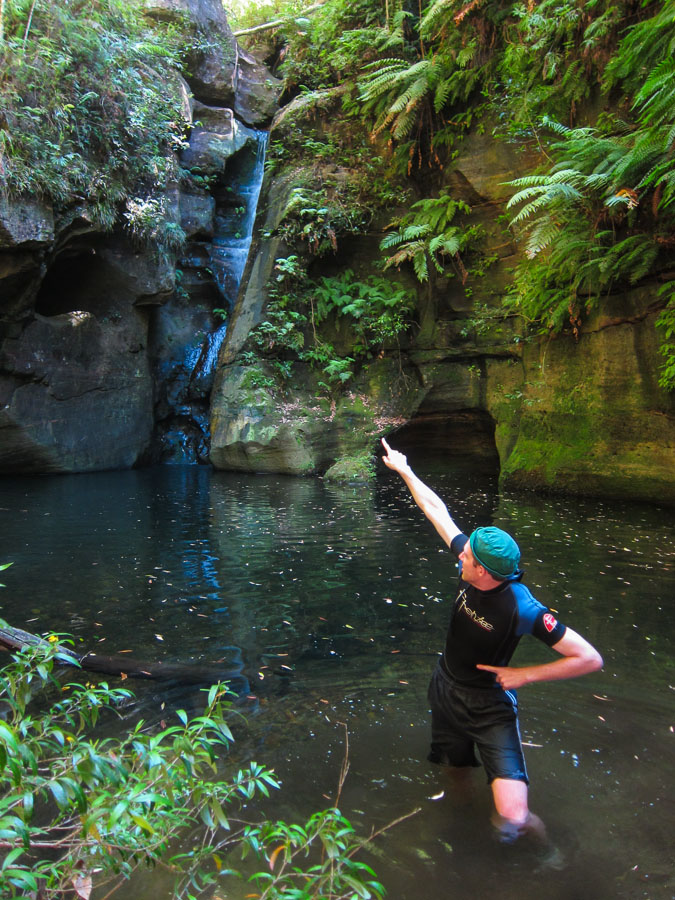 Once that drop was done we de-harnessed as we were under the impression that was the only drop requiring abseiling. We were somewhat surprised to almost immediately get to another drop! There was an old seatbelt tape in place, but not long enough to get all the way down (or at least not unless you were into dodgy jumping onto rock!). In the end we ended up abseiling, though I’m sure there would have been alternatives had we wanted to invest time looking.

From there we had a 2m water jump and swim, some beautiful canyon sections. And before we knew it we were at the junction with King Georges Brook which we had visited last year. 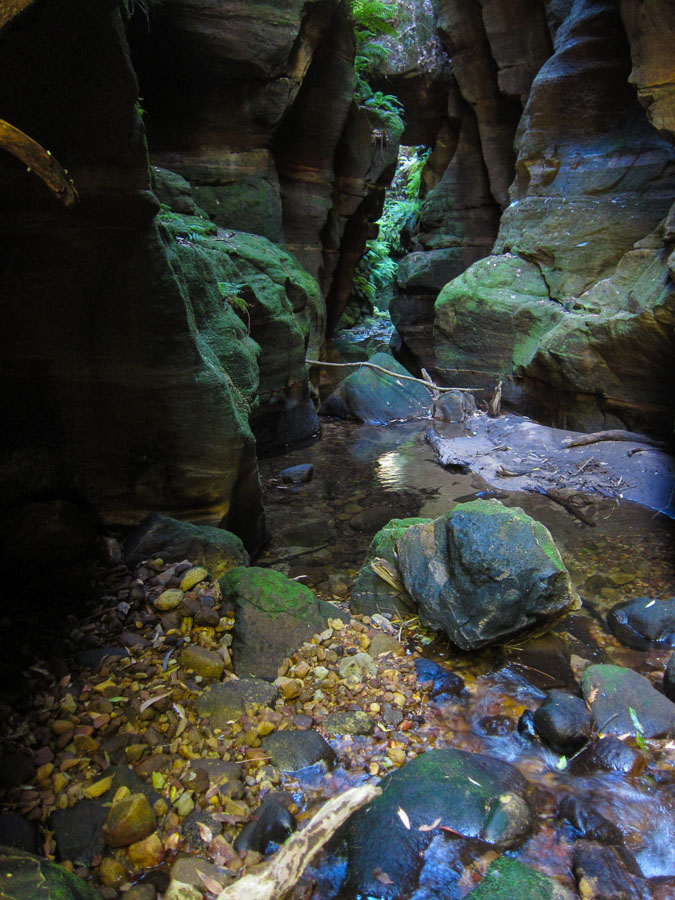 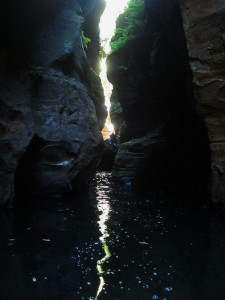 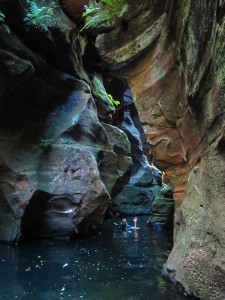 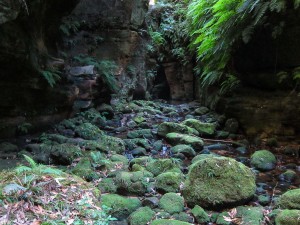 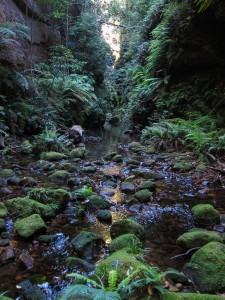 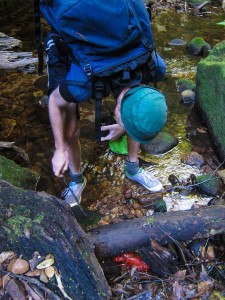 Downstream from the junction there was lots of boulder scrambling and we were glad to reach a camp cave about 6:45pm. 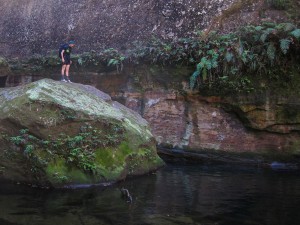 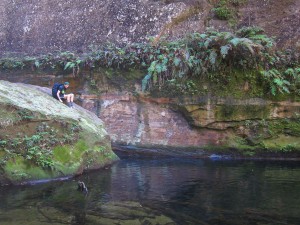 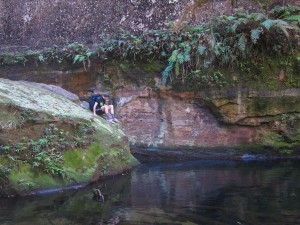 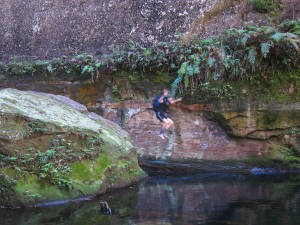 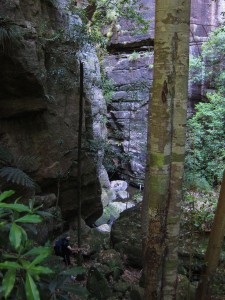 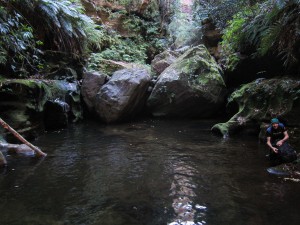 Fortunately lots of eucalypts from the cliffs above had dropped branches so we were had a large pile of suitable firewood fairly quickly. We were both stuffed and were in bed as soon as we’d made our way through cheese, port, soup, dinner and hot drinks… so 10pm! The glow worms were outstanding though I struggled to keep my eyes open to appreciate them. 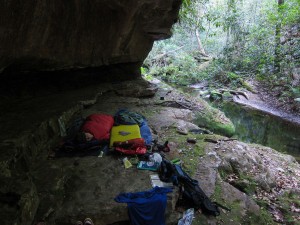 I slept badly, continually waking up and being unable to believe that the sky was not even beginning to lighten. The best sleep I had was from about 6:15am till 7am when I woke with a start as we normally plan to be up at 6:30am. We were away from camp just after 8:30am. 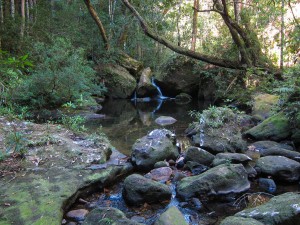 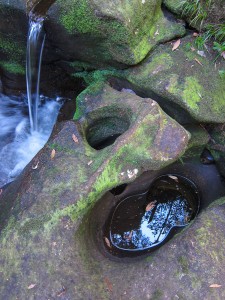 It took us an hour to get to the junction with Carmathen Brook – passing some beautiful cascades on the way. The pool and rock shelves at the junction were lovely – somewhere you’d love to spend a hot day lazing about – if it wasn’t so far from everywhere! 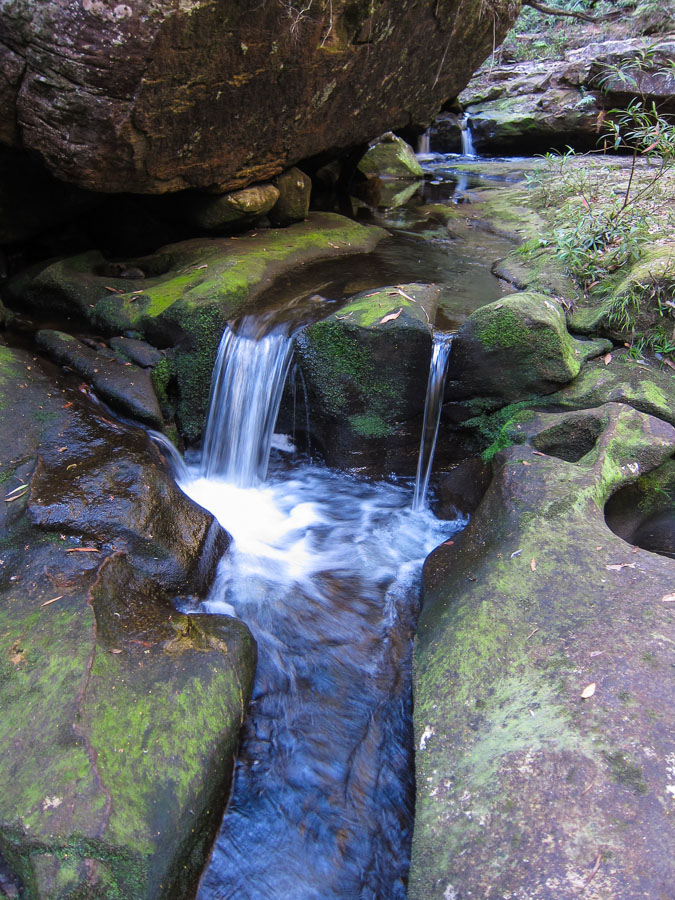 The going up Carmathen Brook was much faster than Explorers Brook. We were able to stay on the bank a reasonable amount of the time. We had set off with wetsuits on but we’d encountered very few wades, let along swims. The zip on my wetsuit was rubbing on my back, along with feeling like I was in a sweat suit, so at morning tea I dispensed with the wetsuit. Of course, shortly after morning tea we encountered our first canyon section and swim, but I managed to bypass this by climbing high onto a shelf on the right. We met a few more wades/swims but it was another warm day and I decided the wetsuit could stay in my pack. 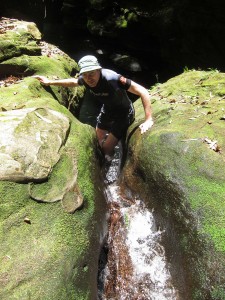 At the end of one long swim there was a slightly tricky climb up a waterfall. Tom with his broken body was struggling to get any traction but fortunately I managed to get up with the help of a low foothold from Tom. After I hauled Tom’s pack up Tom just managed to get himself up. More pleasant creek interspersed with canyon sections followed. We were at the bottom of the Claustral exit at 1:40pm – we expected to see some parties completing Claustral or Ranon but no one came past while we were eating lunch. 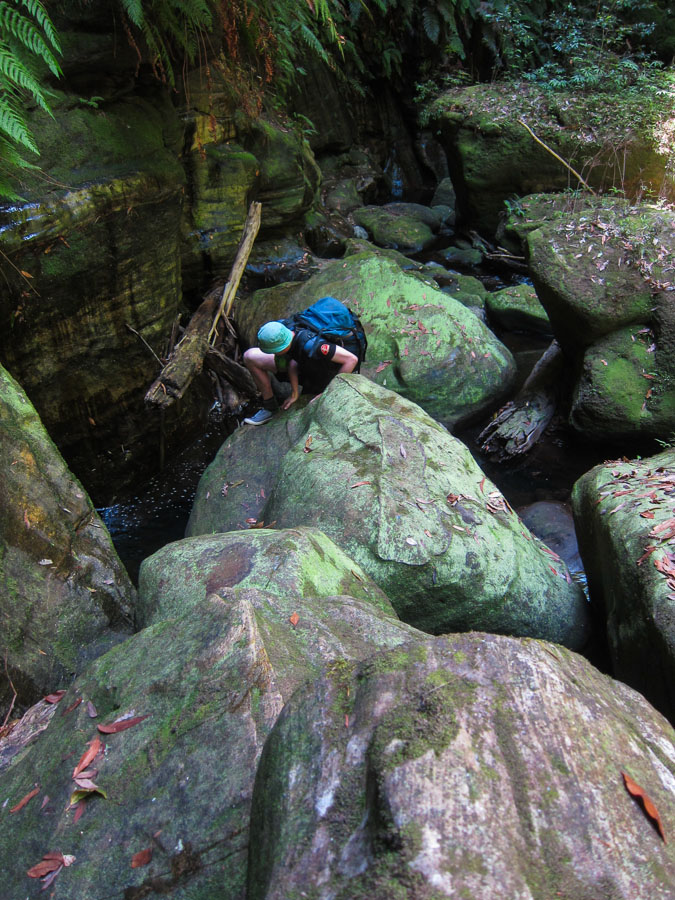 From there it was just the three hours to exit via the now established new Claustral exit. Every time I do the Claustral exit I am surprised at how difficult it is, and how few incidents there are. We met a party of three, a father and 2 teenagers, at the Camel’s Hump where we chatted for a few minutes. Tom was initially asked if he was Dave Noble, and then I was accused of being very familiar, before I let them in on who Tom was. A celebrity in the canyoning community 😉

My legs were running out of steam by the time we left Claustral Brook and headed up the final climb to the car. Tom, on the other hand, had found his second wind, our roles reversed from the rest of the weekend. He steamed on ahead while I struggled to keep plodding on. After enjoying the view on the large rocky outcrop before the road we signed the logbook before arriving at the cars around 5:20pm. The bag of chips in the car didn’t last long and soon we were on our way home, Explorers Brook finally ticked after too many years. 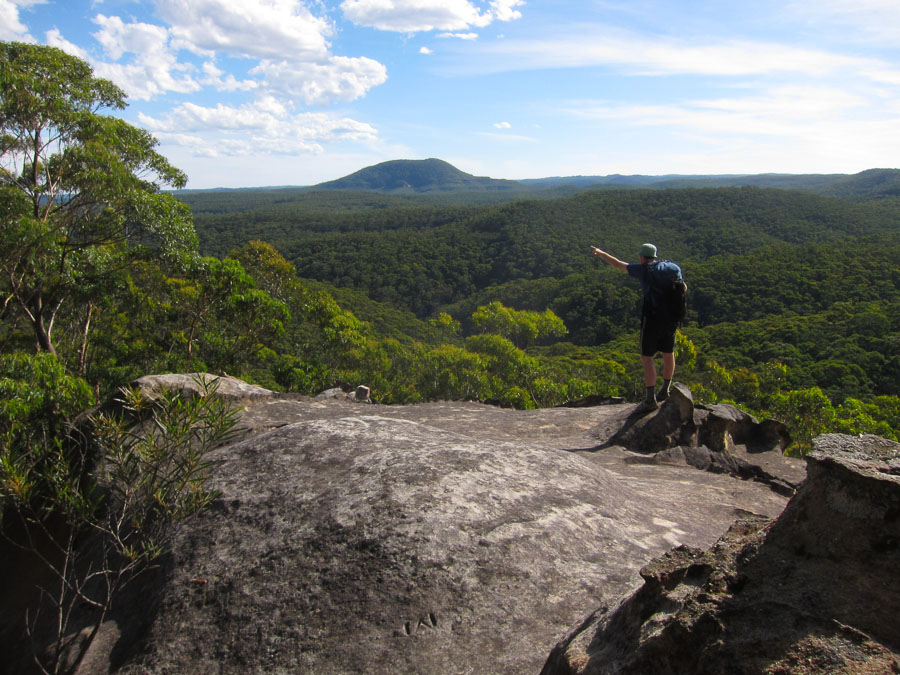 When we got home we found this guy in our sink. Not sure what sort of spider? 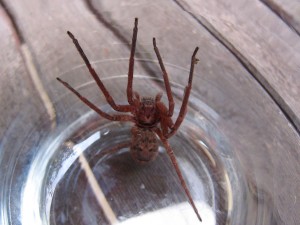