We were glad to wake to clear skies and see blue sky and sun appear as the morning unfolded. Despite already being at Mt Wilson it seemed a bit of a frantic rush to get to the Claustral car park for 9am. James was already there waiting for us. I was pleasantly surprised when there was only 1 car that didn’t belong to our party at the car park.

We marvelled over the track work that had been done since we were last in the canyon – the stairs look like they would have been a lot of work. And then suddenly the manicured track vanishes and you’re on your own!

The canyon really does come upon you very quickly with the new entrance (though it’s not really very new any more). 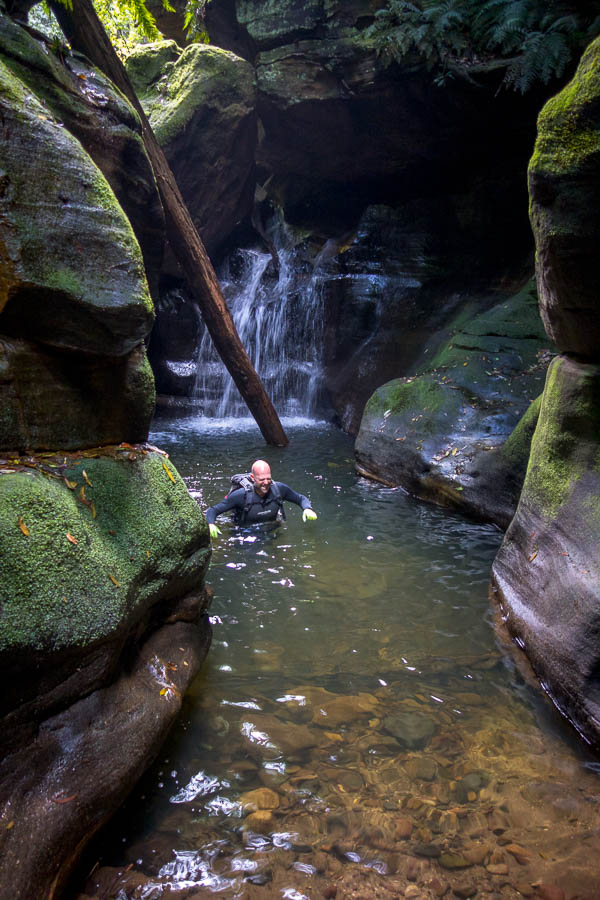 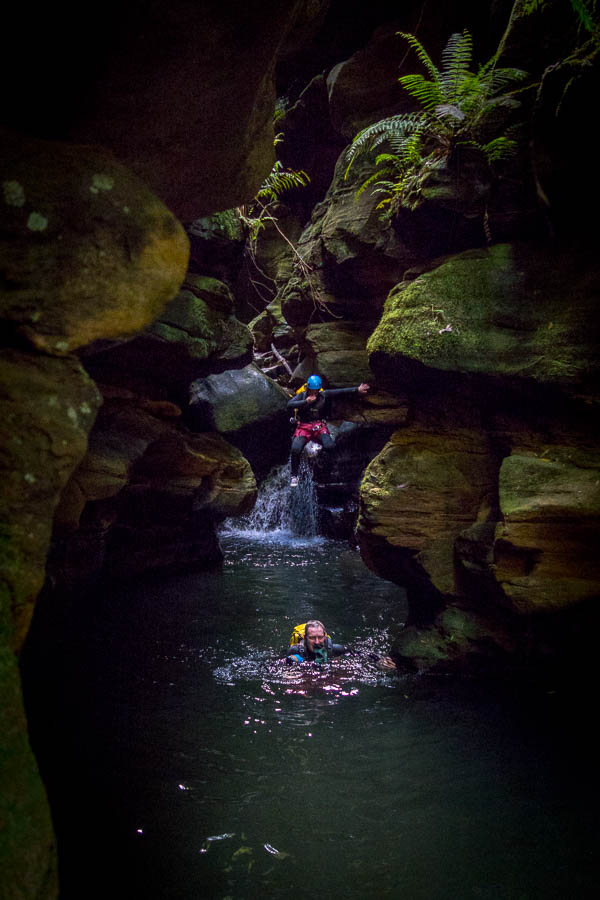 It felt like we’d barely got going when it was time to set the first abseil in the Black Hole. 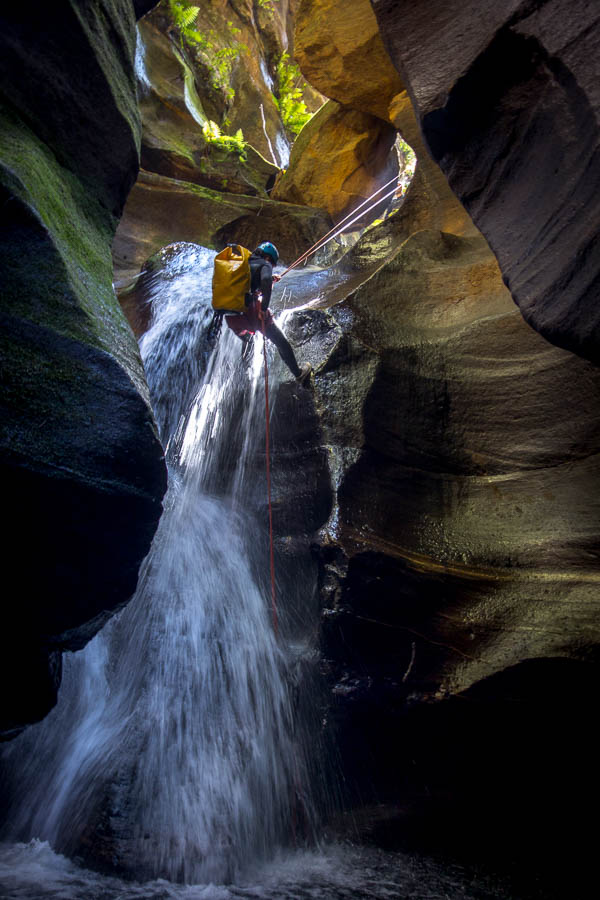 Jo on the first abseil in the Black Hole 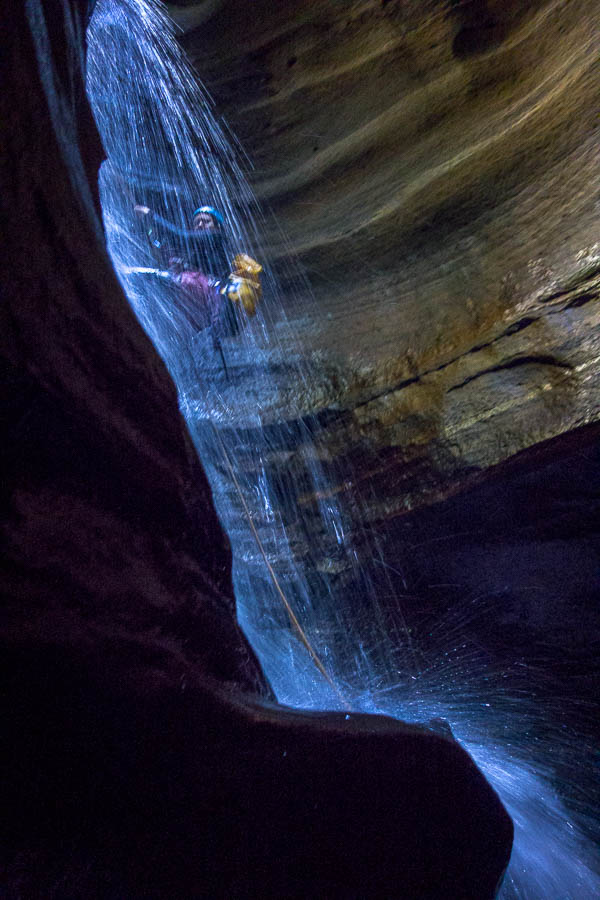 Jo on the second abseil in the Black Hole 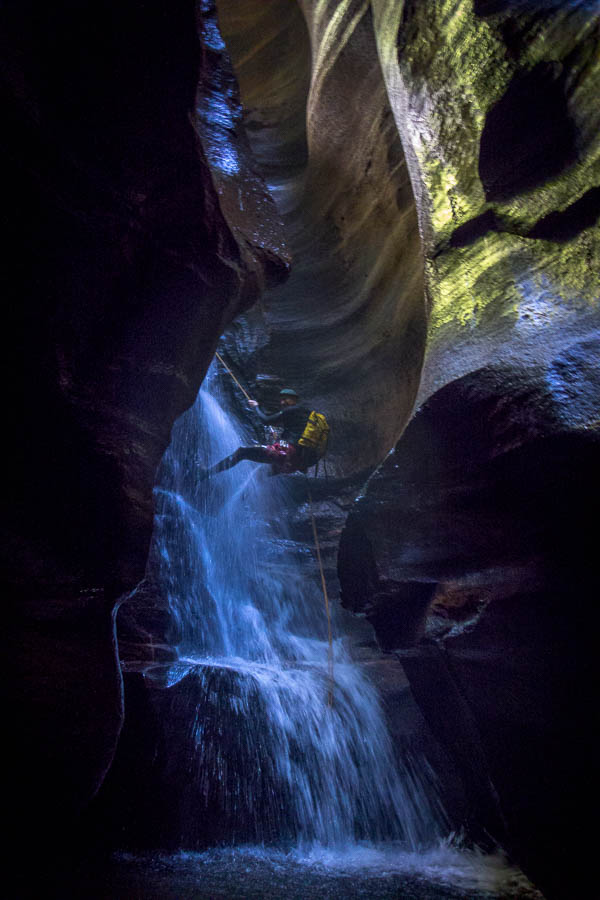 Tom on the second abseil in the Black Hole 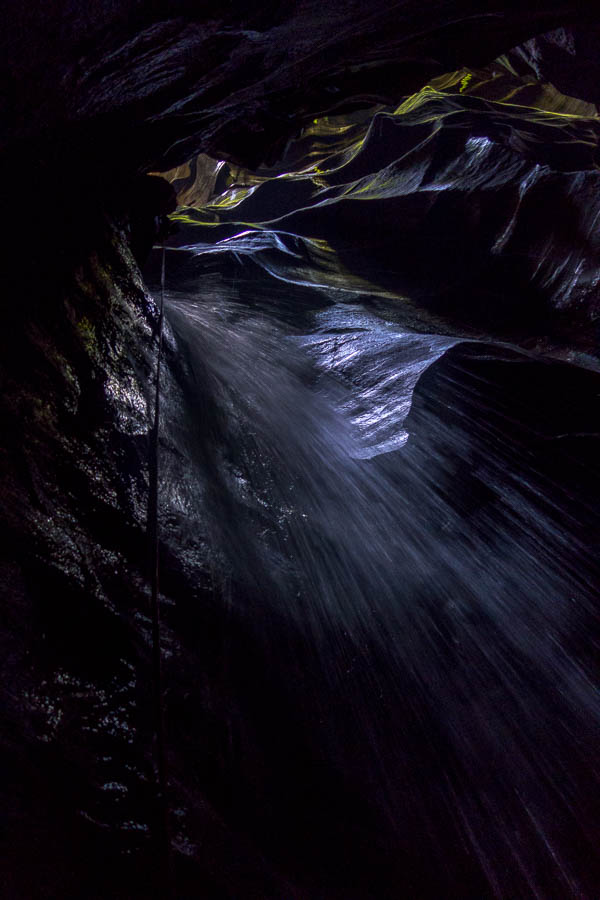 Looking up the third abseil in the Black Hole

We got through those fairly efficiently, though my camera not so well. I was at the bottom of the third abseil taking photos when James came down – next minute I was being absolutely drenched from all sides. Not a great time to have the camera out of the dry bag. 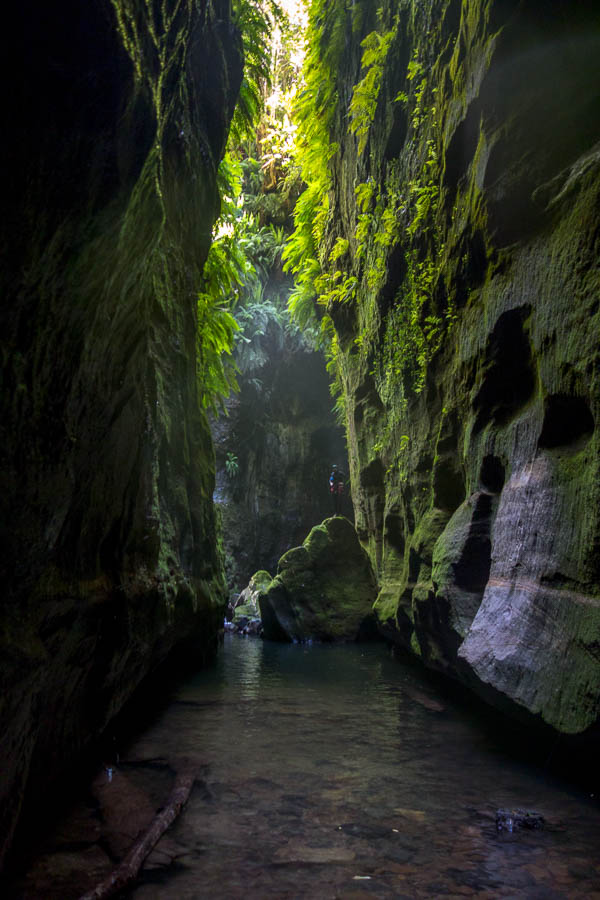 Tom in a never previously seen before composition…

When we got to the Thunder Junction Jo, myself and my camera took advantage of the sun to warm-up and dry out, while James & Tom headed up Thunder. They were gone long enough that we declared it lunch time and had finished lunch by the time they came back.

A couple came past while we were eating lunch. The conversation was very short. “Ranon or Claustral?” “What time did you start”. And then they were off again. Maybe our lazing about made us unworthy company!

I enjoyed not having to get wet immediately after lunch, and by the time we’d made our way through the more creeky/bouldery section I was almost ready for a swim. Quite the contrast to how cool I’d been the day before in Bowens South. 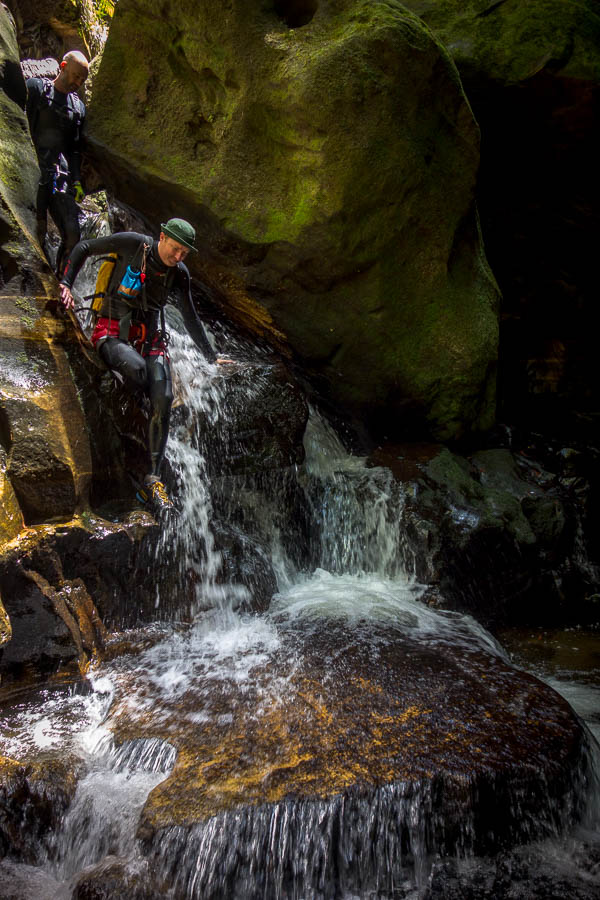 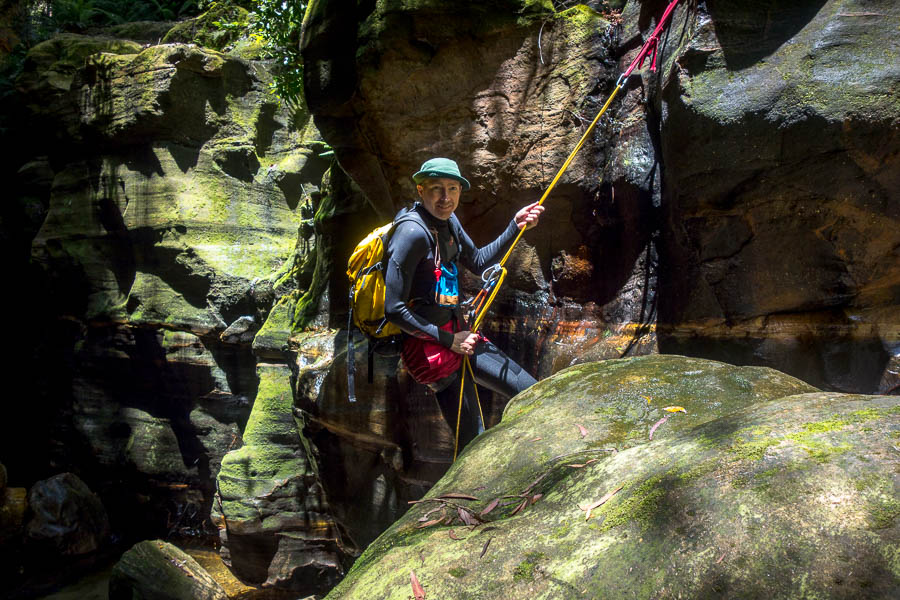 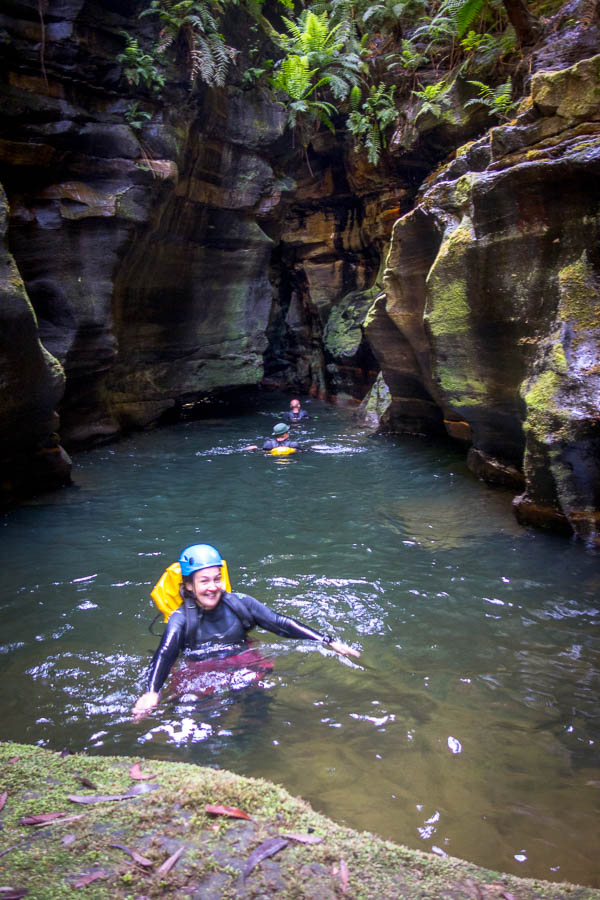 The end of the tunnel swim

I never seem to get any better at the main climb on the exit. This time I managed to get my foot stuck in the crack and required considerable effort from Tom below me to free it. The volley wearers seemed to have better luck with their more flexible soles. I felt slightly better when Tom also got his (non-volleyed) foot stuck – though he managed to unstick himself. Besides that the exit went without incident. 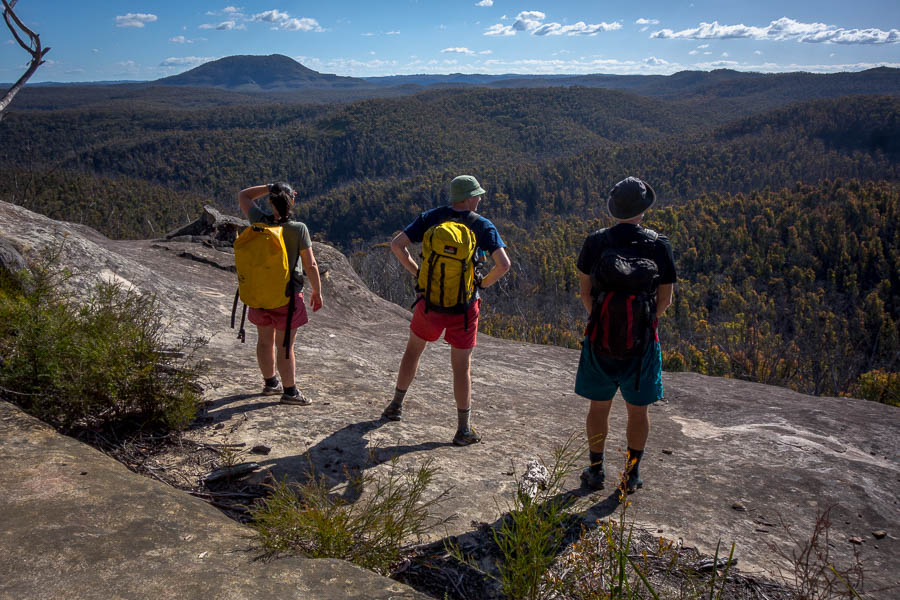 Tom, Jo & I headed back to Mt Wilson and the hordes, while James headed back to Sydney. A great day out. Mt Wilson was heaving, not surprisingly as there was several organisations with events on that weekend. The spot we’d secured the night before ended up being a winner and we had a relatively peaceful evening – even spotting two Greater Gliders in the trees above us.