Two bludgey long weekends in a row had left me feeling overindulged. The forecast for the coming weekend was great. “We have to get out” I informed Tom. Unimpressed with the two suggestions I put on the table he countered with Glen Trig. Given he had been suggesting it on and off for a while I figured he really wanted to get back there. I didn’t really care where we went, as long as I got some exercise. Even better if we could line up some other people, then it would be harder to bail out at the last minute.

As we drove along the Wolgan Road water dripped from the trees, the overnight frost starting to melt. The grass was frosted over at the Newnes Campground, and I rapidly reassessed whether I really wanted to wear shorts to walk in. Fortunately the Pipeline Track warmed us up and we were soon feeling positively balmy having escaped the frost hollow at the campground. 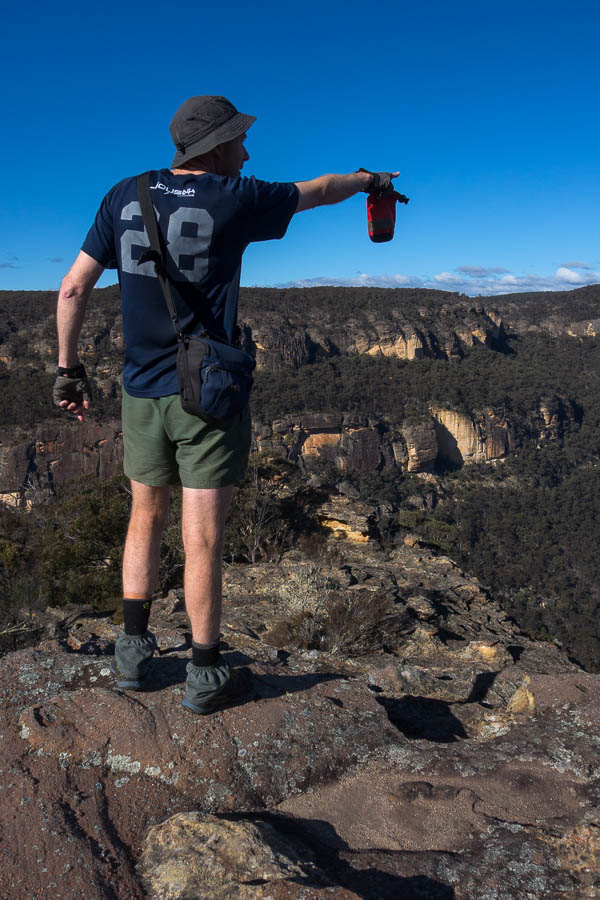 It had been over 18 months since we’d been in the area so a visit to the Pagoda Lookout (now very officially signed) was definitely on the cards. A bit further on we had a late morning tea looking over the Glen Davis side of the Pipeline Pass and not long after left the track for the unknown.

Despite only having a couple of kilometres to cover (as the crow flies), the country was intricate. The map gurus had been at work with DEMs, slopes and probably all manner of other things I don’t understand. It made for relatively easy negotiation of the complex terrain. 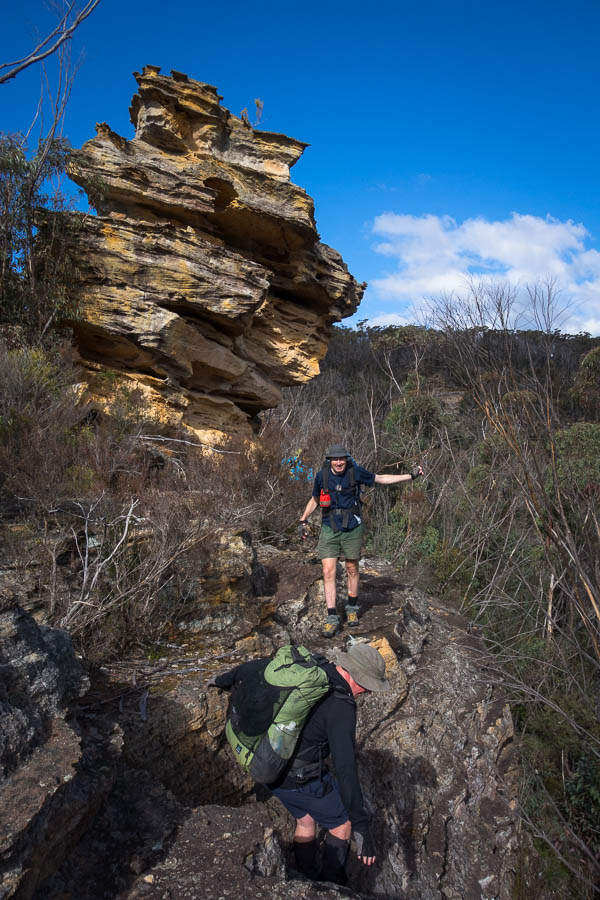 Is he still pointing? 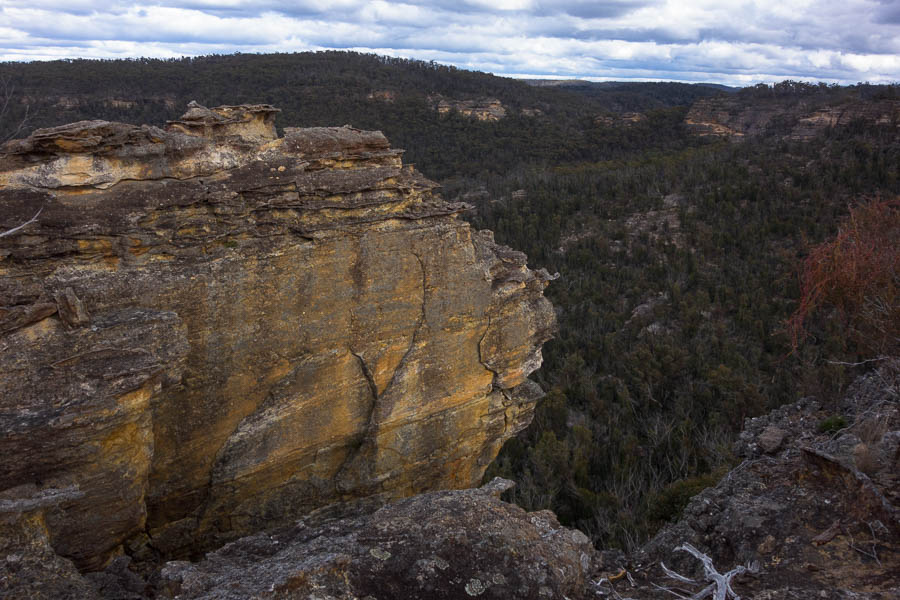 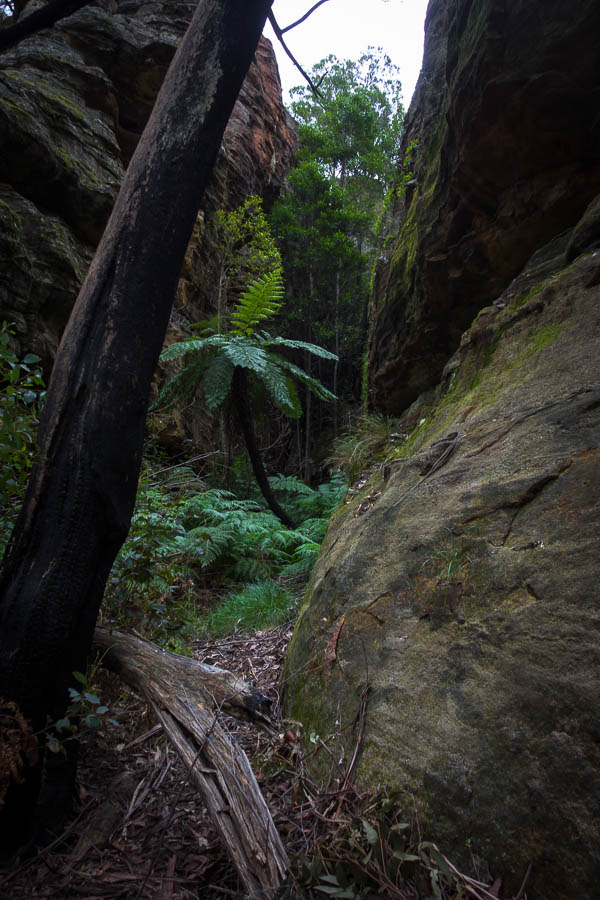 Though, the maps don’t show if the gullies are going to have water in them, do they!? Tom didn’t believe Toni when she said we couldn’t go the way he wanted unless we were going to get wet. Not far off the shortest day no one was was inclined to get wet feet. 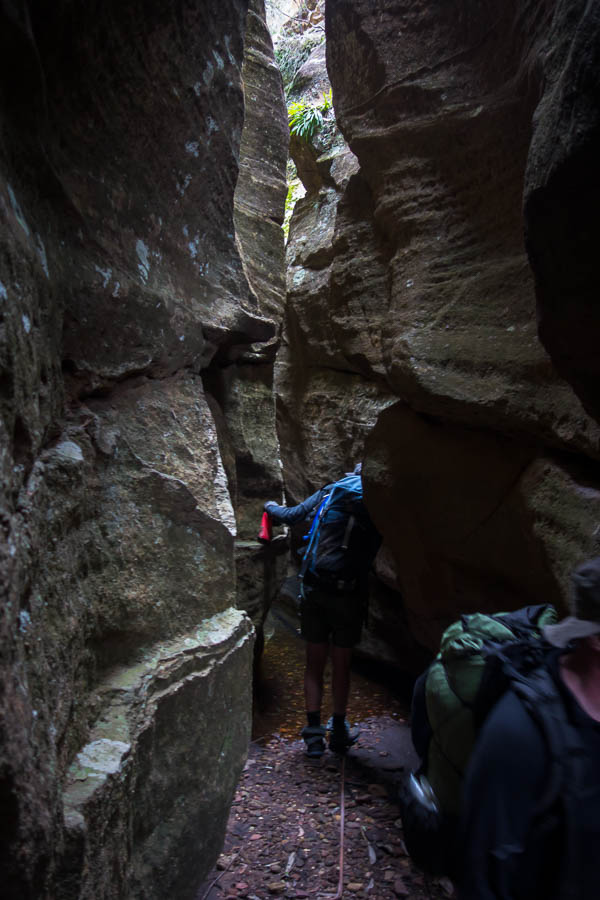 Tom checking out the water barrier

Fortunately Jon had already scouted a dry route which gave us access through the cliff line and into pagoda city. We clearly weren’t the first to use this route as we found a cairn further up the pagodas pointing down to our pass. 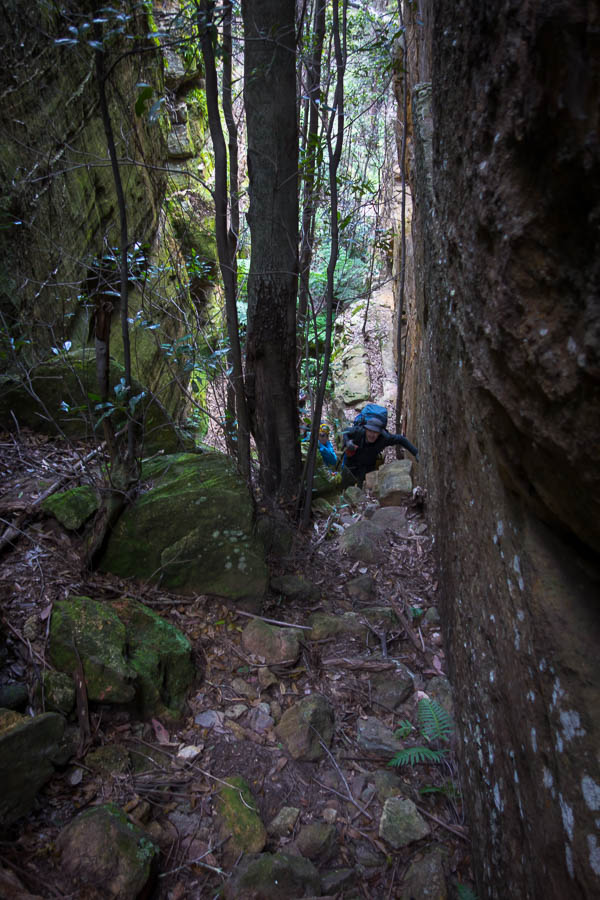 Tom was itching to get into the canyon above the water barrier but high cliffs kept us elevated. Something for another trip when we have ropes! Instead we contented ourselves with negotiating the pagodas. 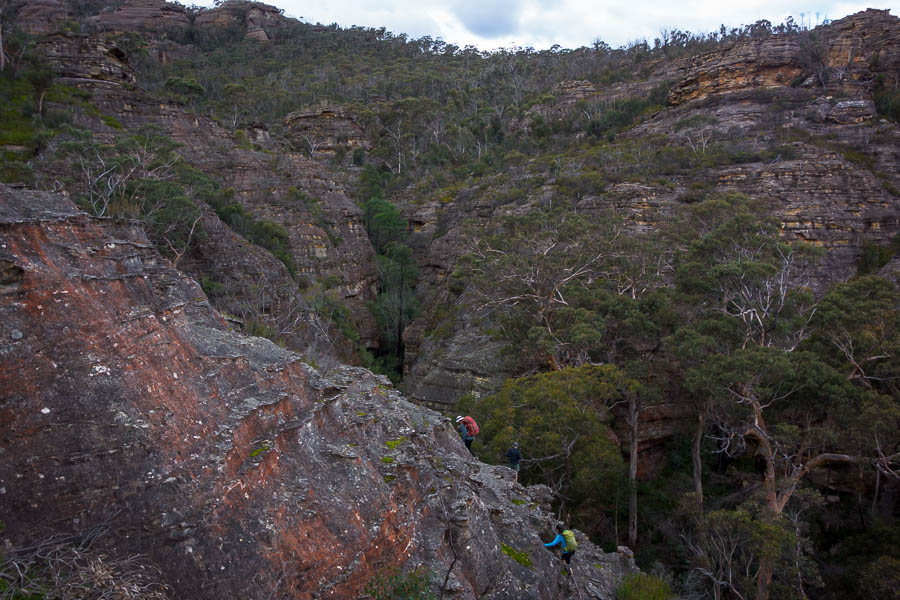 Smiffy, Tom & Toni on the pagodas 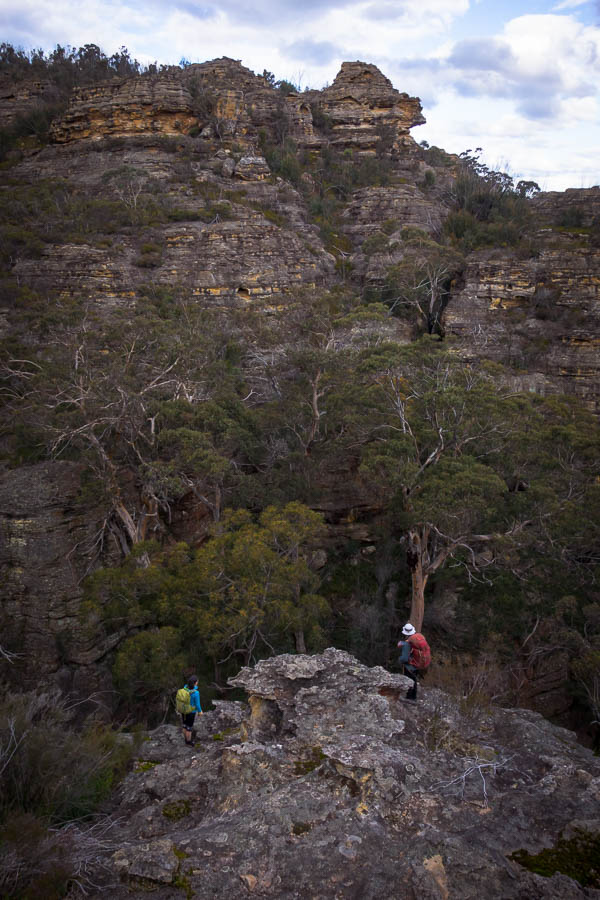 Unfortunately the nose had a small section which was more ambitious than we were keen for. So we dropped down and traversed under the cliffs to find an alternate way up. 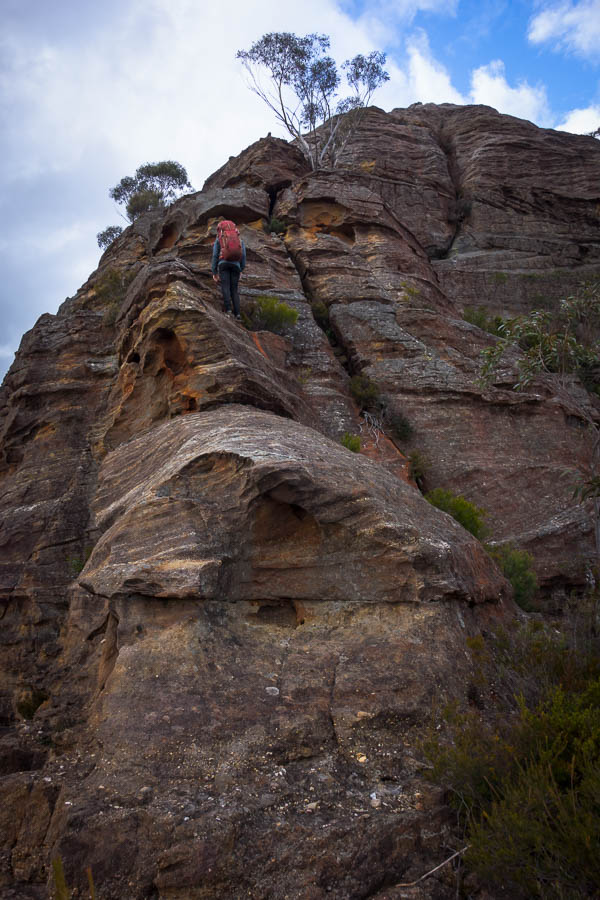 Smiffy contemplating a route up the nose 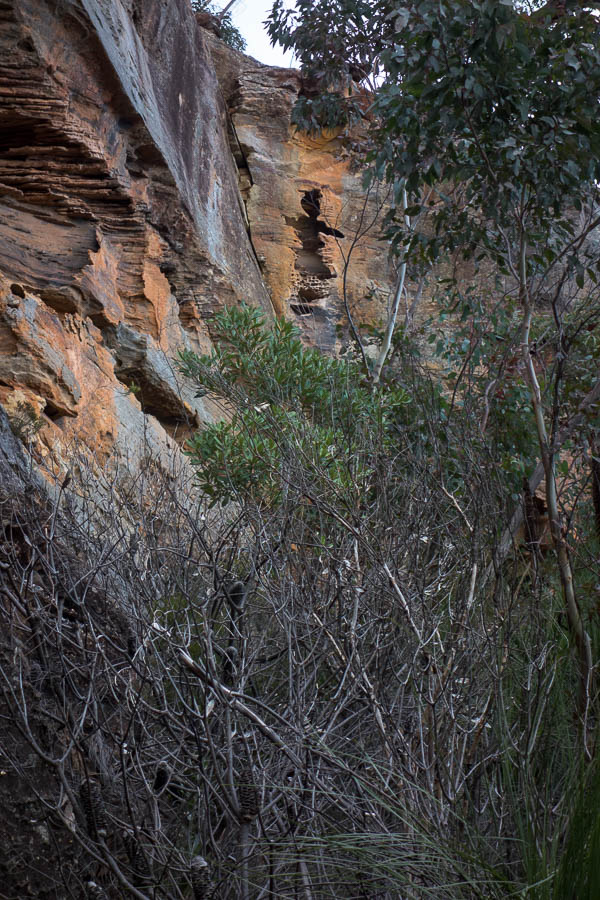 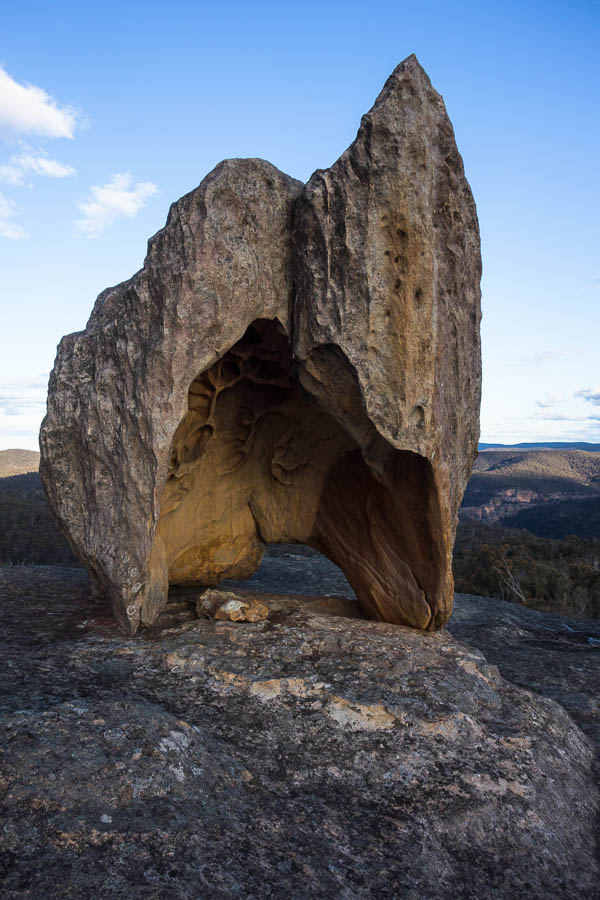 Even once we’d made it through the next cliffline the final ascent to the summit was not straightforward. I waded my way through scrub and managed to get on top from one side, while Tom & Smiffy jammed a log in place to get up in a different place. 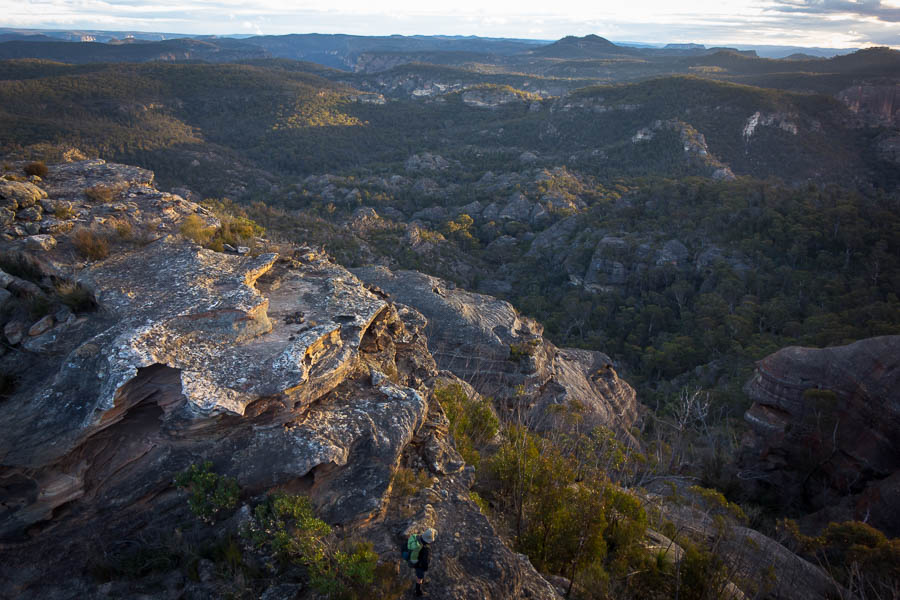 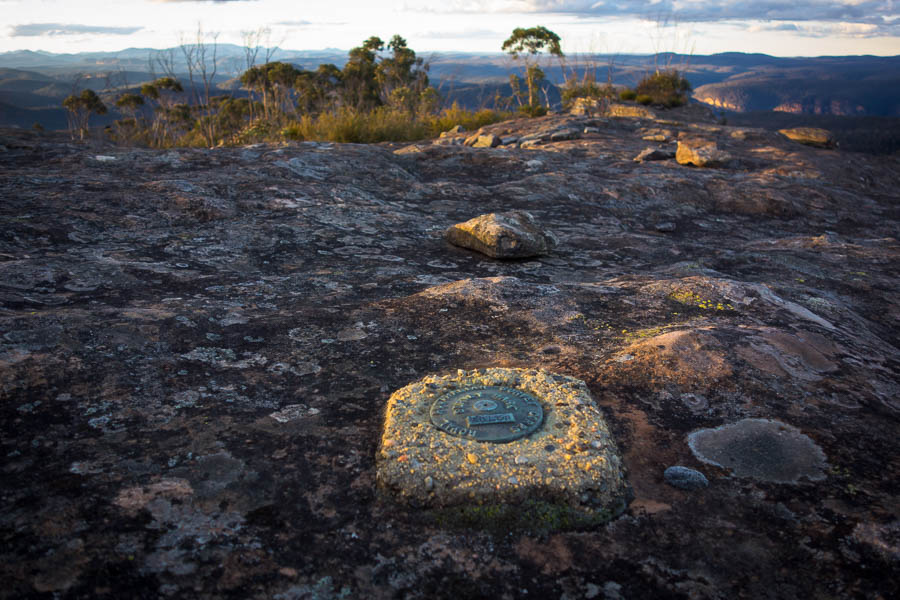 The wind made us keen for a more sheltered spot than camping on the open rocks. We were glad to find a sheltered gully with some flat space. Only a small time window remained before sunset, so any camp set-up was delayed. Instead, a mad dash to get what we needed and settle in with the first round of snacks, cameras and warm clothes on the tops. 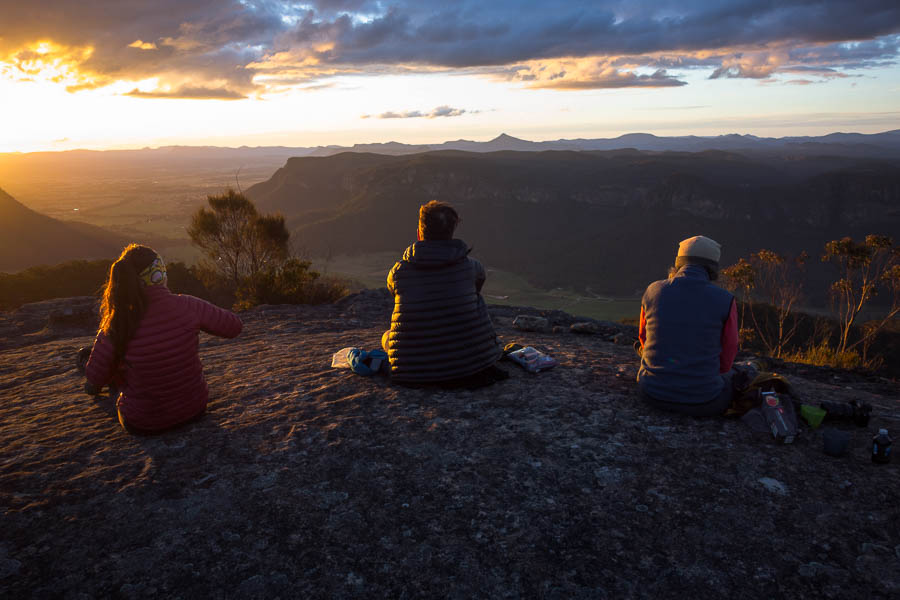 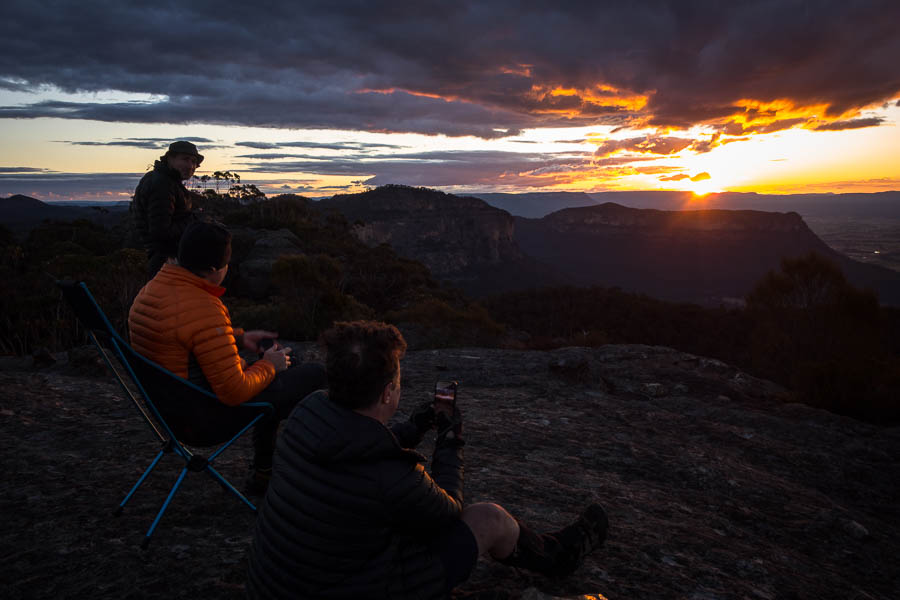 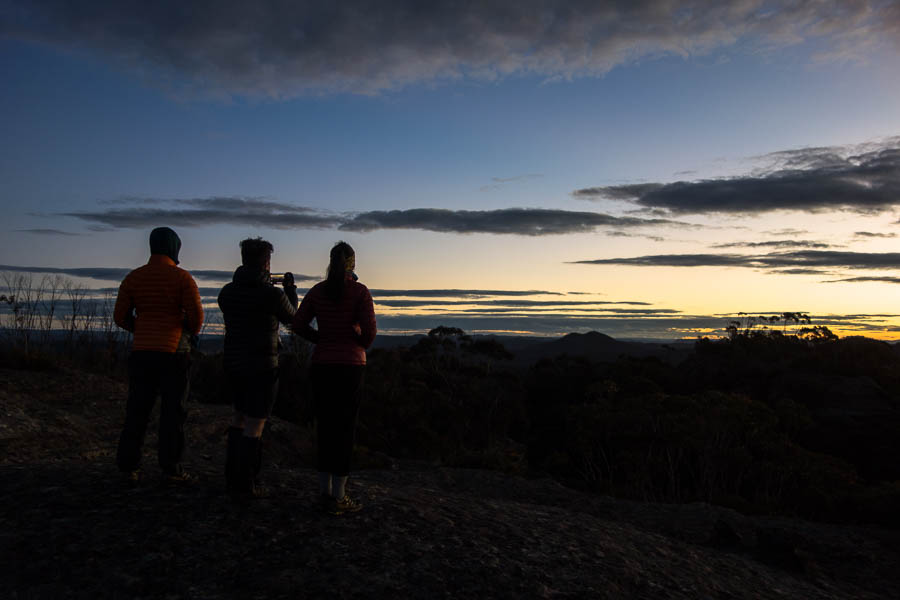 The last of the light

Post-sunset we went through several more rounds of snacks and finished off with sour cherry cheesecake brownie (thanks Toni!). Efforts to create a natural candle not successful. A rousing round of Happy Birthday to Vivien* (conspicuous by his absence) had to make do.

The next morning Tom, Jon and Smiffy got varying amounts of sunrise photography in, while Toni and I enjoyed being warm in our sleeping bags. 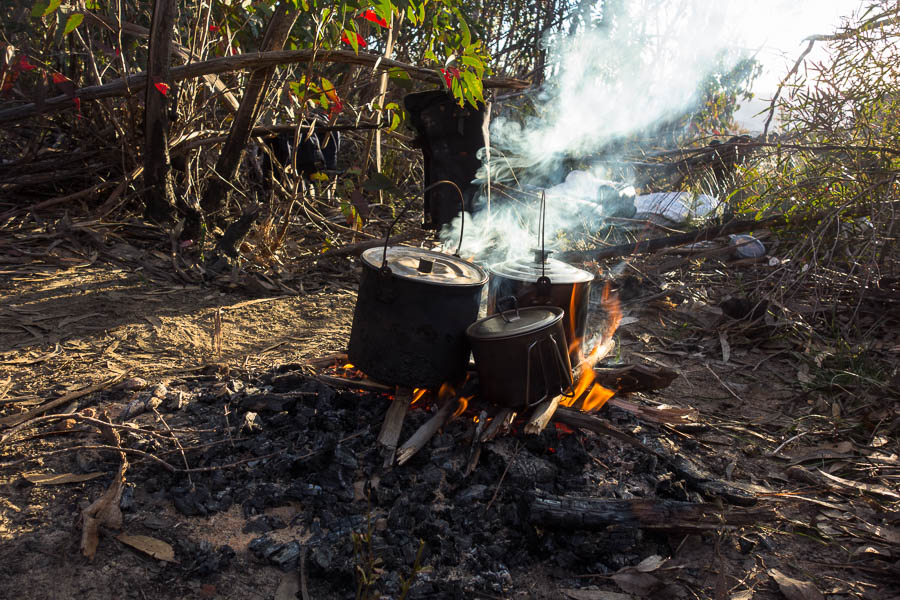 A family of billies 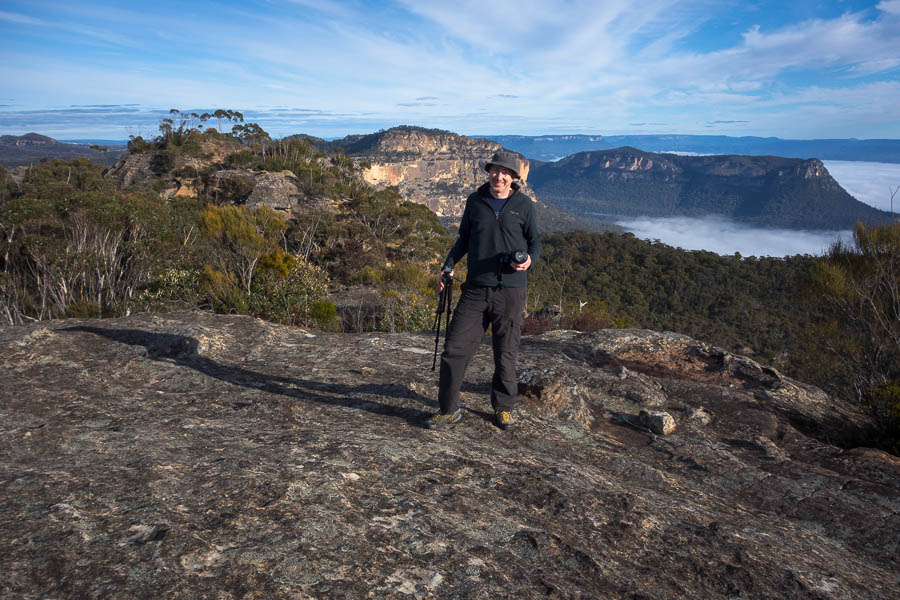 Eventually we set off, taking a different route out than the one we’d approached with. 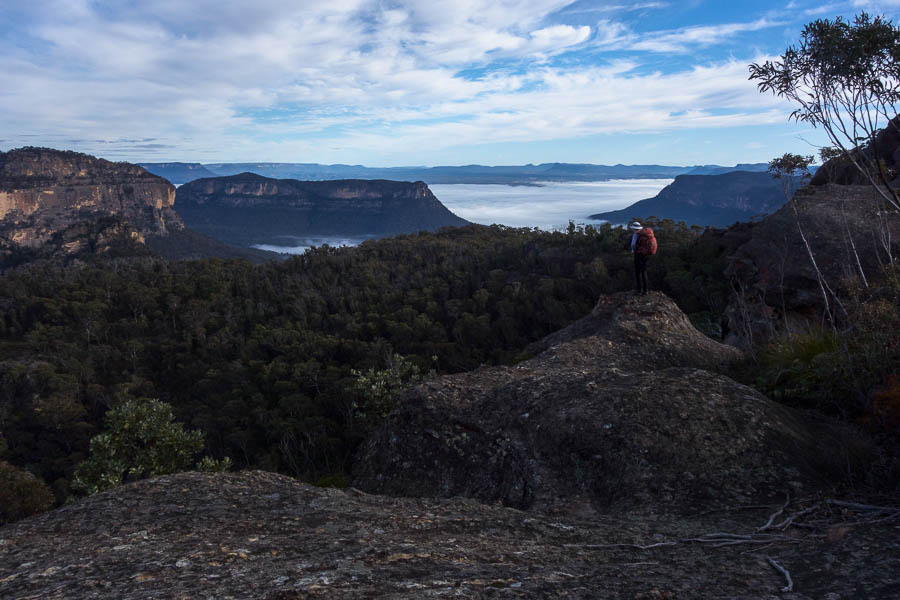 More water (and more inconveniently, a 4m drop) prevented us getting down the gully we were exploring. After reversing we decided to roll the dice and head along the cliffs for a few hundred metres and hope the maps were giving us the right information on an alternative pass. 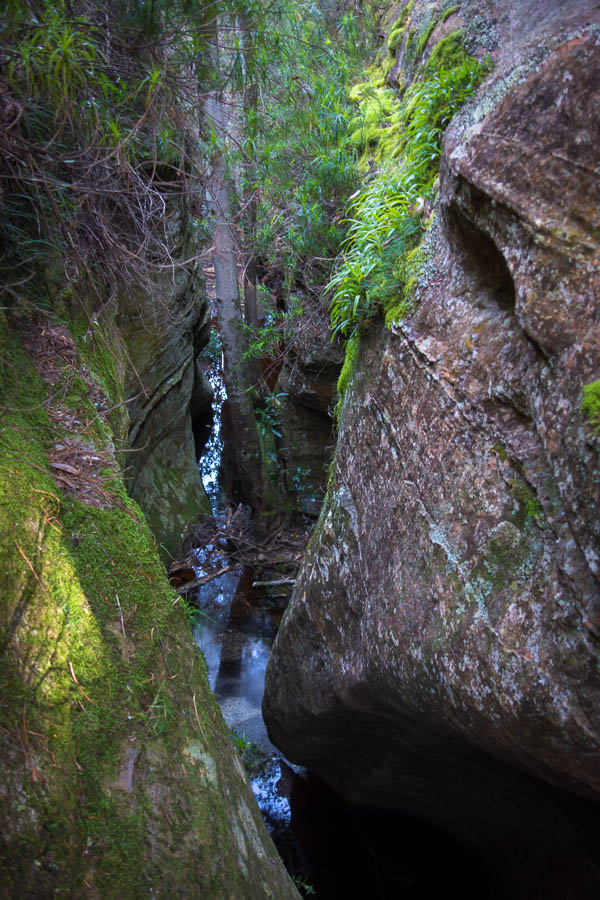 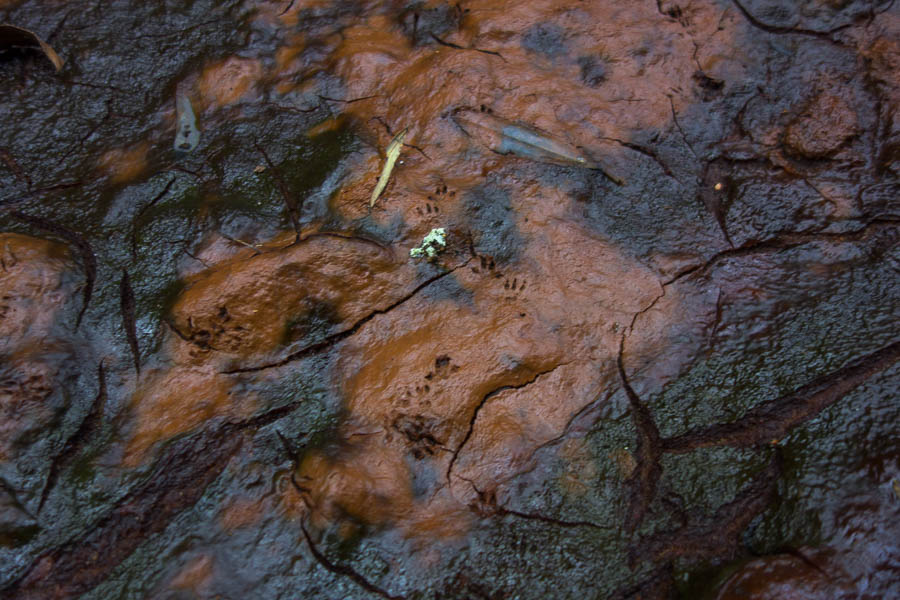 We got lucky and descended where we hoped to, and explored some more canyon-y sections of the main creek. Before once again deciding it was not the right trip to get wet feet. 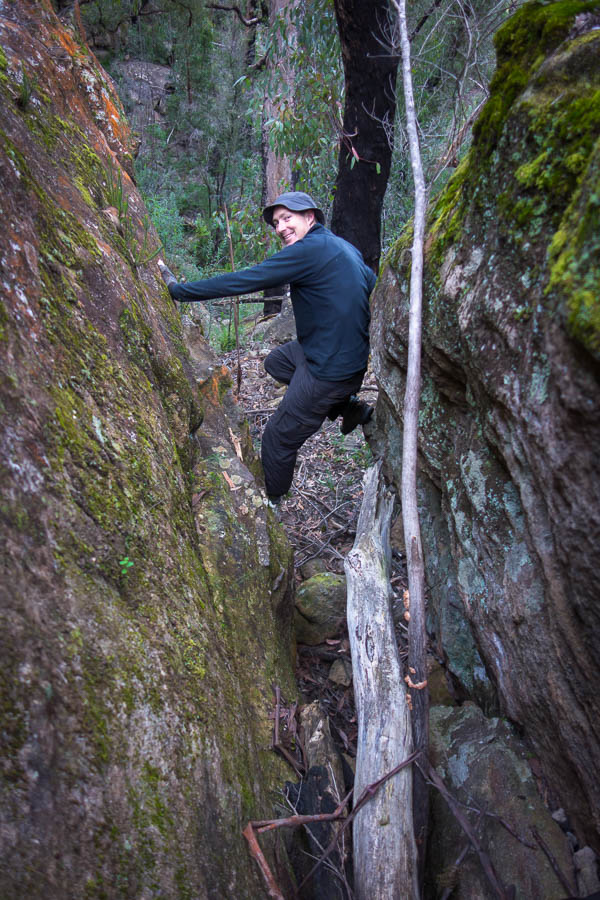 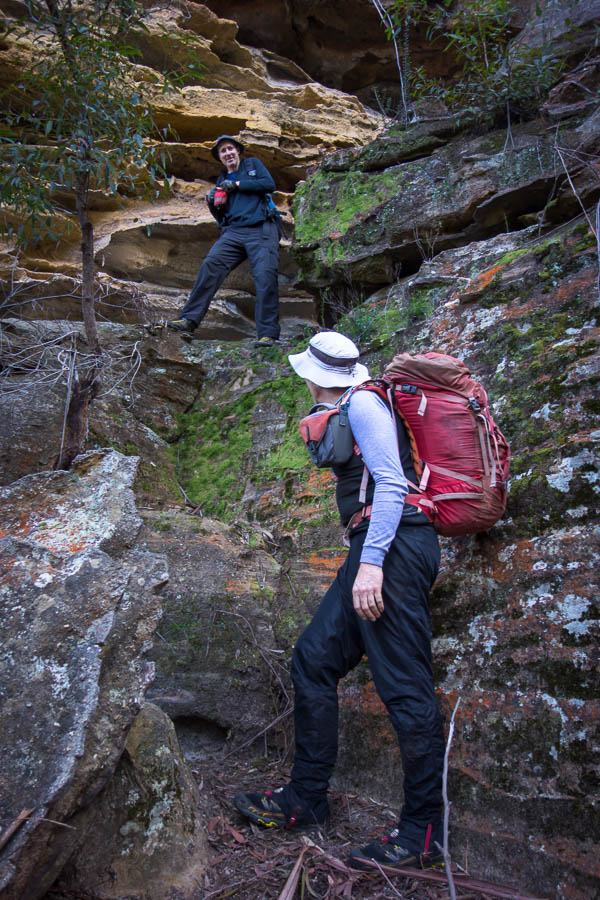 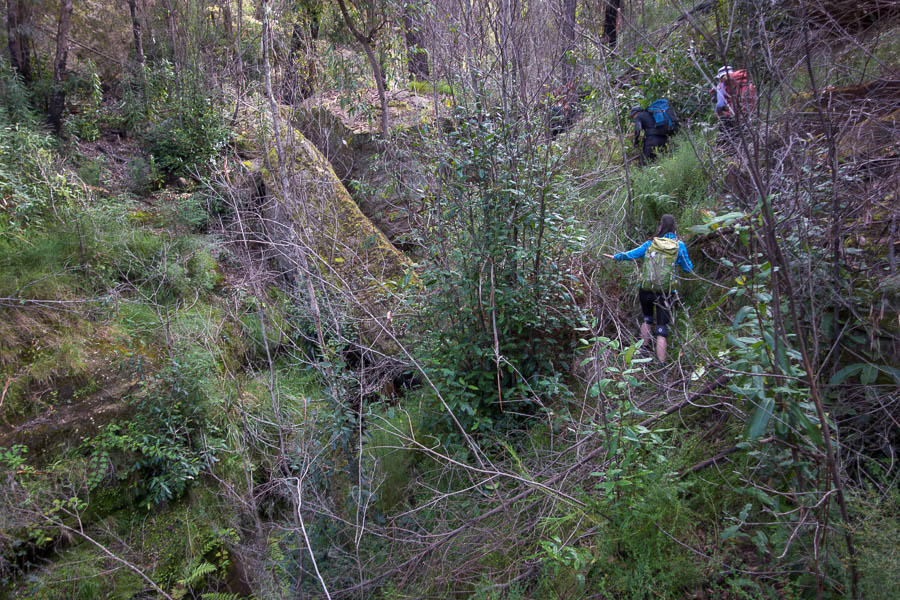 From there it was a relatively straight-forward ascent back to the point we left the track the day before. 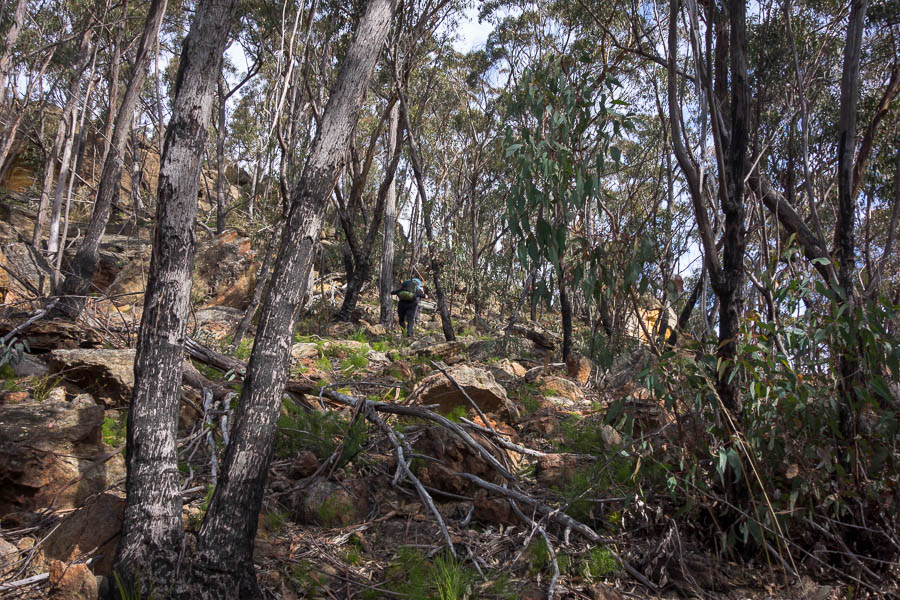 We saw a couple of groups of walkers at the Pagoda Lookout, including a couple of women who had walked up with nothing except what they were wearing. The other couple said the women had asked what they were carrying in their backpacks – and were a bit surprised when they said “food, water, first aid”. Apparently a new idea!

The cold wind put paid to any ideas of lounging about looking at the views. 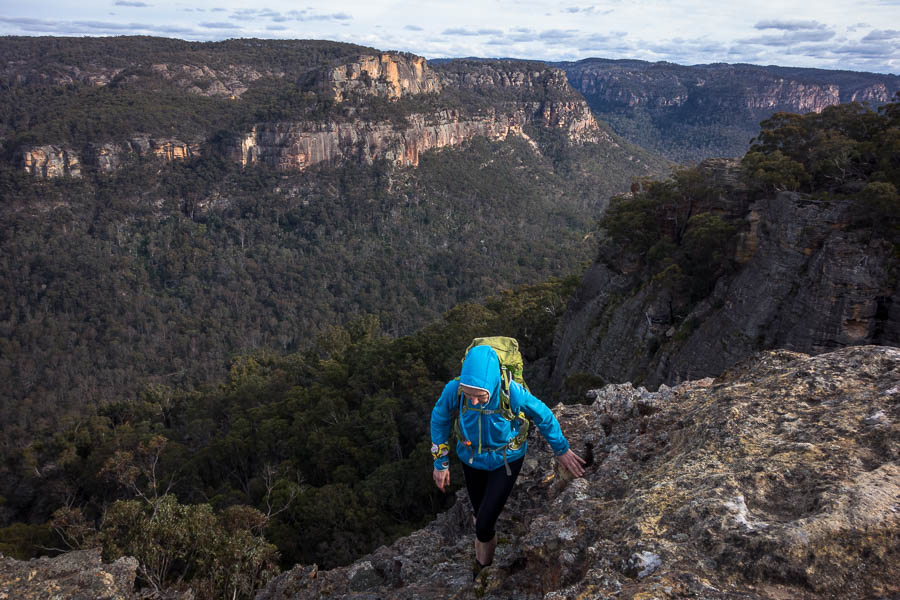 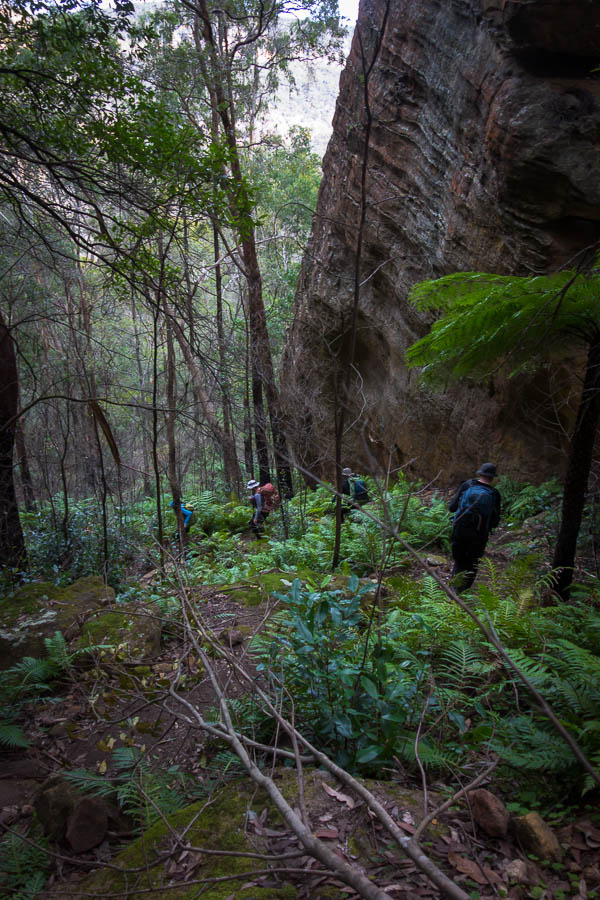 Back at the cars at 2:30pm meant we got to Pie in the Sky just in time to get apple pie before they sold out. An excellent weekend with good weather, great company and spectacular views.