From Harrietville we drove to Eden. My research on cafes & bakeries to stop at was thwarted by cafe-owners going on holiday, or not being open on a Monday, or things simply not existing where google said they were! Tom did get a very good beesting at the Swifters Creek Bakery, but otherwise our trip to Cape Conran Coastal Park had little to note. We did the Nature Trail at Cape Conran Coastal Park before the final leg through to Eden.

Our evening meal (very tasty chinese) in Eden was shared with numerous Valentine’s Day diners. Post-dinner we went for a walk out to the Rotary Park lookout. An almost full moon had just risen and it was a beautiful evening.

Another early start – we had to meet our transfer at 7am at Boyd’s Tower – which was around half an hour’s drive away. Steve from Light to Light Transfers drove us to Green Cape Lighthouse. Eden was forecast to get to the high 20s – apparently fairly unusual – so I was particularly glad we’d chosen to get the early start. By the time we got to Green Cape, and walked out to the Lighthouse it wasn’t much before 8am when we started walking.

The Light to Light walk was part of the area affected by the Black Summer Bushfires just two summers earlier. We had seen the previous day at Cape Conran the impact of the fires there and weren’t sure that was going to mean for us for shade for the next 31km. 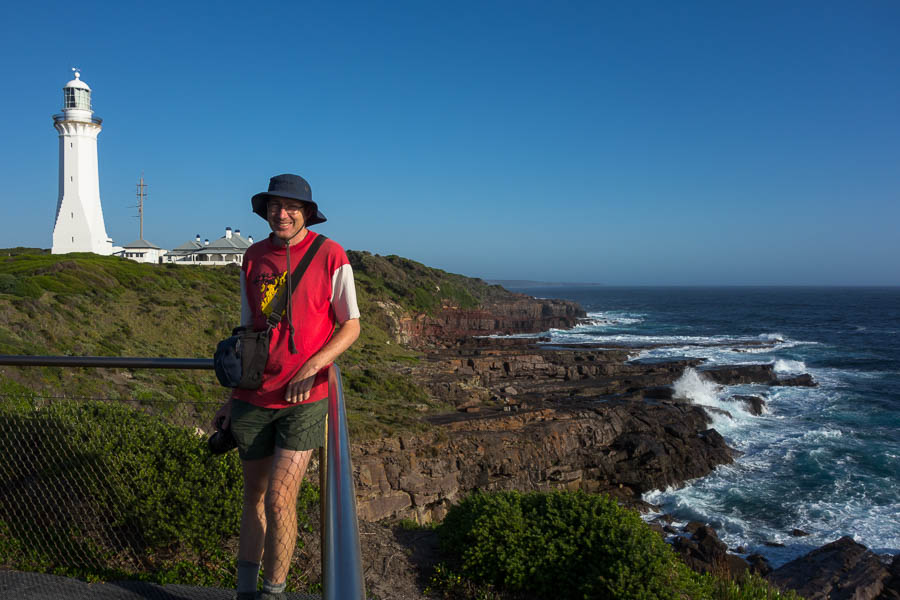 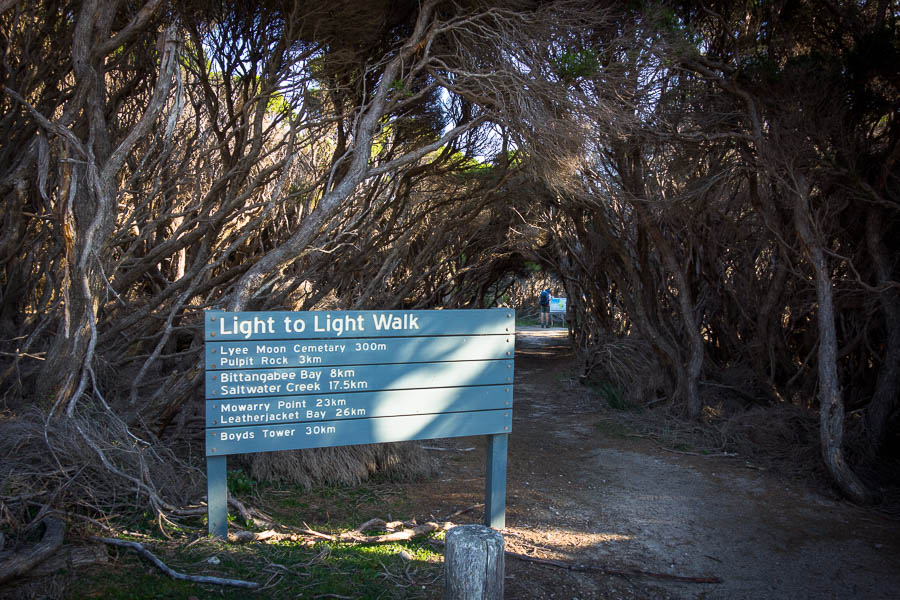 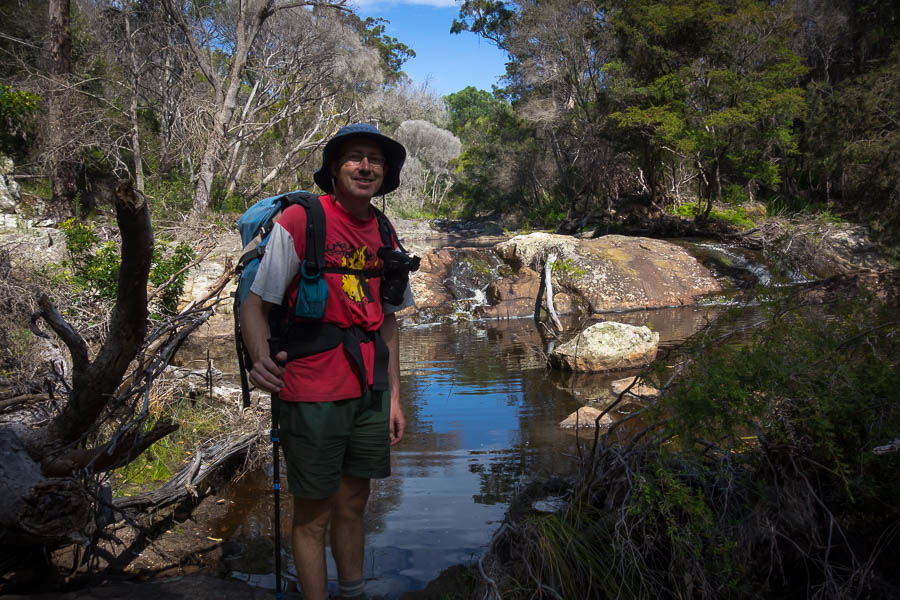 One of several pleasant creek crossings

We didn’t know it at the time but the section between Green Cape and Bittangabee Bay appeared to be the least fire-affected. In places there was re-growth but in many parts it felt like it has been a low intensity burn and the larger trees were relatively unaffected. 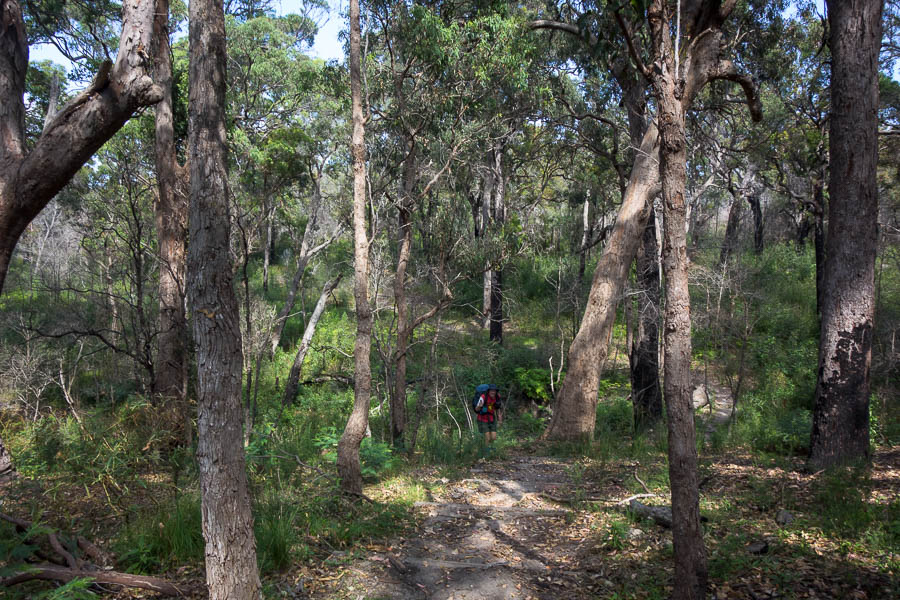 We started bumping into day walkers from Bittangabee Bay (drive-in) camping area as we got closer. One of them was gamely carrying a fishing rod in case he could cast somewhere – the disappointment on his face when I informed him this section of the track didn’t go anywhere near the coast was quite comical. 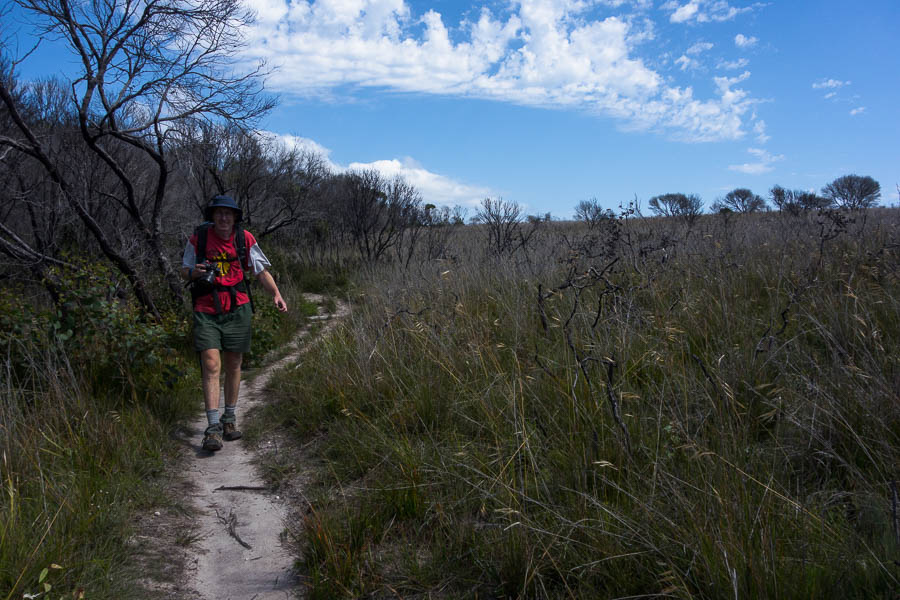 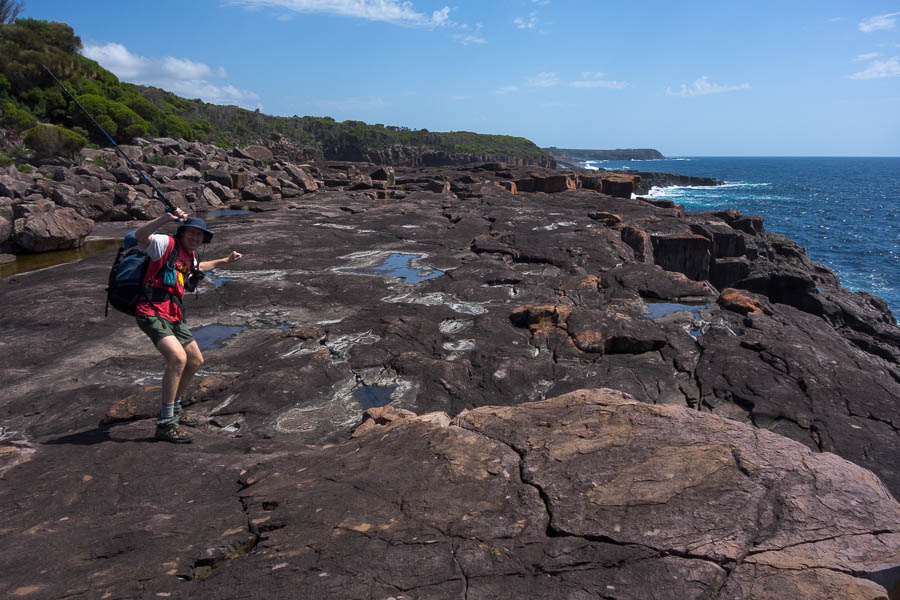 One of the surprisingly few coastal sections 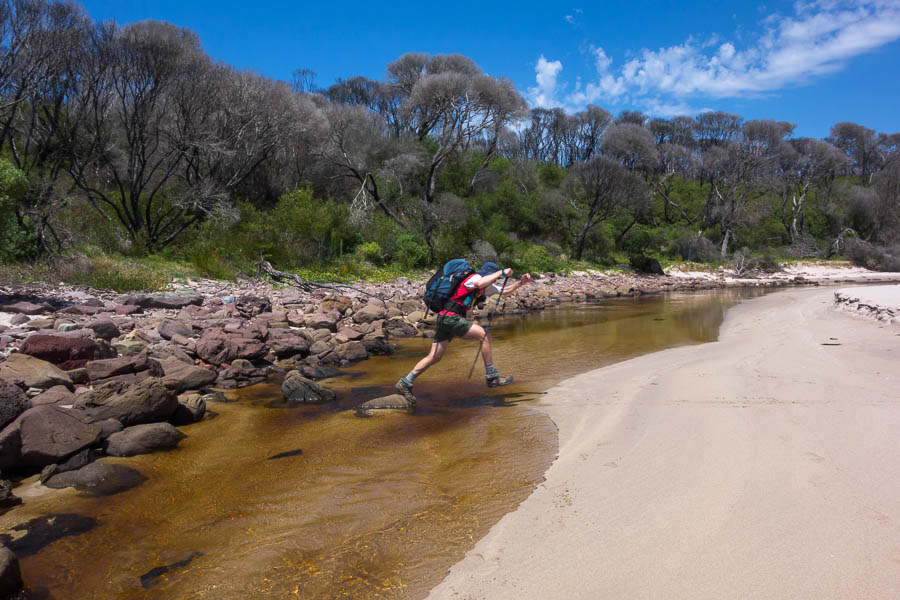 We made it into Saltwater Creek (another drive-in camping area) for a late lunch. We were pretty knackered by the time we got there – 18.5km [17.5km from the sign-board, plus 1km to get to the lighthouse & back] before lunch with packs – not something we’d been doing much of recently! So we found some shade next to the day parking area and collapsed. The plan was to spend most of the afternoon at Saltwater Creek in the shade before pushing on to Mowarry Point to camp later in the afternoon. Once we’d had lunch and a hot drink our mental capacity was up to doing a cryptic crossword. This has become one of our essentials to take on long bushwalking trips as something to fill time – weighs nothing, and provides hours of entertainment.

About 4:30pm I decided it was time we moved on. Back on the beach we had to cross the lagoon to continue north. It seemed we were going to have to wade across. But I foolishly decided to take on a high-risk rock-hopping route. It was only 2 rocks to get across but they were covered in black-green algae. My first tentative steps told me they were extremely slippery. However, I decided to pursue my route rather than the small inconvenience of taking off my shoes to wade. I was lucky my decision just ended up with me losing my sunglasses and laying in a series of bruises down my right leg, oh, and losing all dignity as I slipped off the rocks in front of a dozen beach-goers. The sunglasses were washed out to sea, and at the time I thought I was unhurt, but the deep black bruises on my thigh and shin which still persist a week later tell another story.

With that indignity behind me, and Tom crossing by wading, we were on our way again. As we approached a rocky outcrop we spied another group with overnight packs. Initially it seemed they were going north like us, until they passed us going south. I was delighted as I hoped that meant we’d have Mowarry Point to ourselves.

The section from Saltwater Bay to Mowarry Point appeared to have been scorched in the fires. There was significant regrowth – similar to what we’d seen in Morton National Park – it looks ‘weedy’ but most of it is native. But I daresay the Light to Light was a more attractive walk pre-fires. The regrowth made it feel like we were walking through a sauna as it was densely packed with little airflow. Fortunately we had 3 or 4 gnarly crossword clues still to work out, and we managed to solve them while we were walking through this section. The map case around my neck was not for navigating but so I could double-check the clues’ wordings! 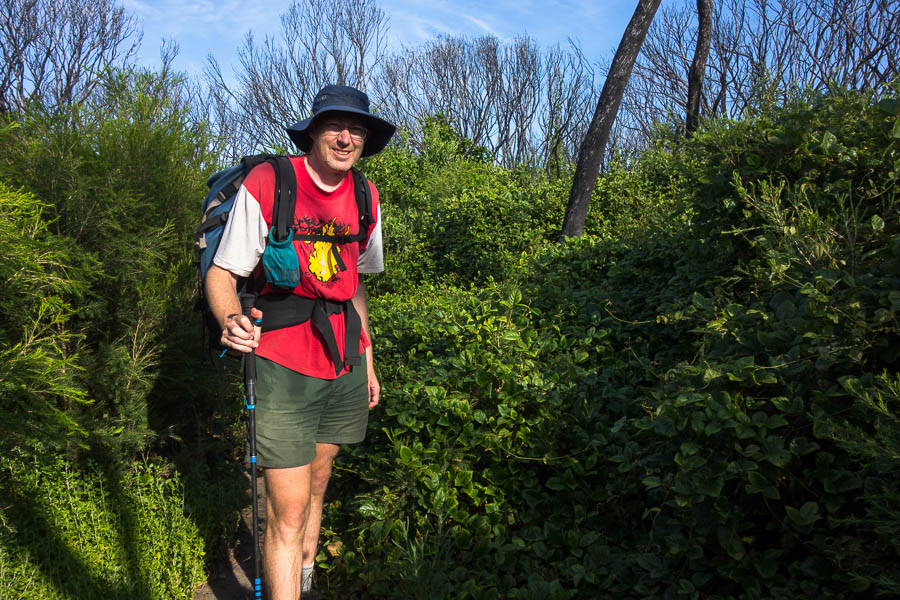 Somewhat surprisingly the Mowarry Point remote camping area is not really at Mowarry Point (as it’s marked on the map). It’s somewhat past the point. Tom was getting a little nervous that the big grassy headland he’d seen on the aerials had been taken over by vines and we were going to have to fight to find a place to camp. Fortunately it was just a bit further along the route and we were pleased to get there and have it to ourselves, and be able to camp near the edge with a nice view. 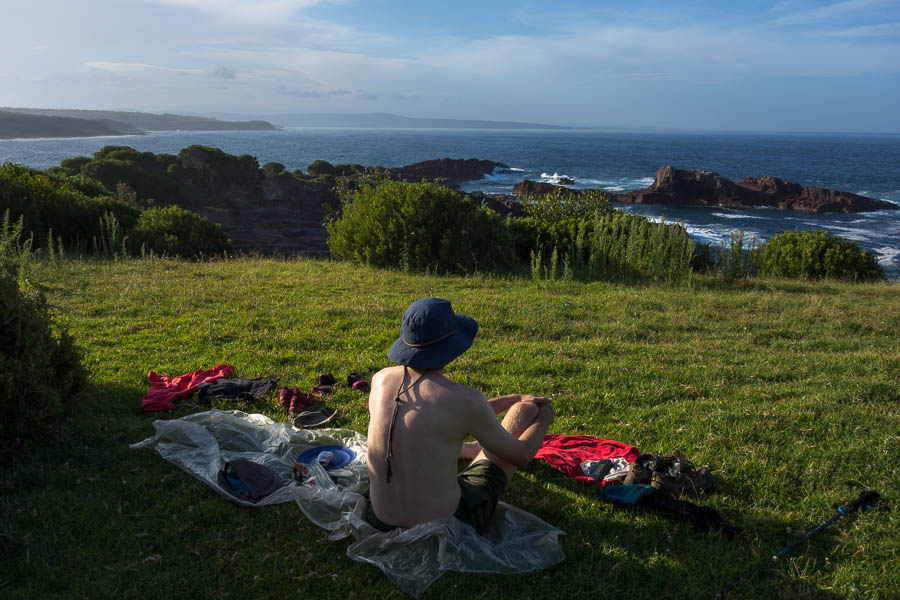 Our campsite at Mowarry Point

Another group arrived just after we did – but they were heading for Saltwater Creek – they still had plenty of daylight but weren’t going to be getting there before 7pm. We had a swim at the beach below the headland and found we weren’t alone. There was quite a large group – but they had camped on the northern headland – with 3 or 4 tents almost on top of each other on what looked like a fairly uncomfortable slope.

The campsite wasn’t perfect – we had been hoping for good views of the full moon rising and/or a speccy sunset – but we were facing North rather than West and the light didn’t come to the party. Regardless camping on the tussocky grass is a pretty comfortable experience and we both slept well – particularly given the distance we’d covered.

Sadly sunrise was as uninspiring as sunset, and we were on our way by 9am. There was no great hurry since we just had 7km to cover for the day. Leatherjacket Bay was a very attractive spot, but only an hour into our walking we had no real reason for a break. 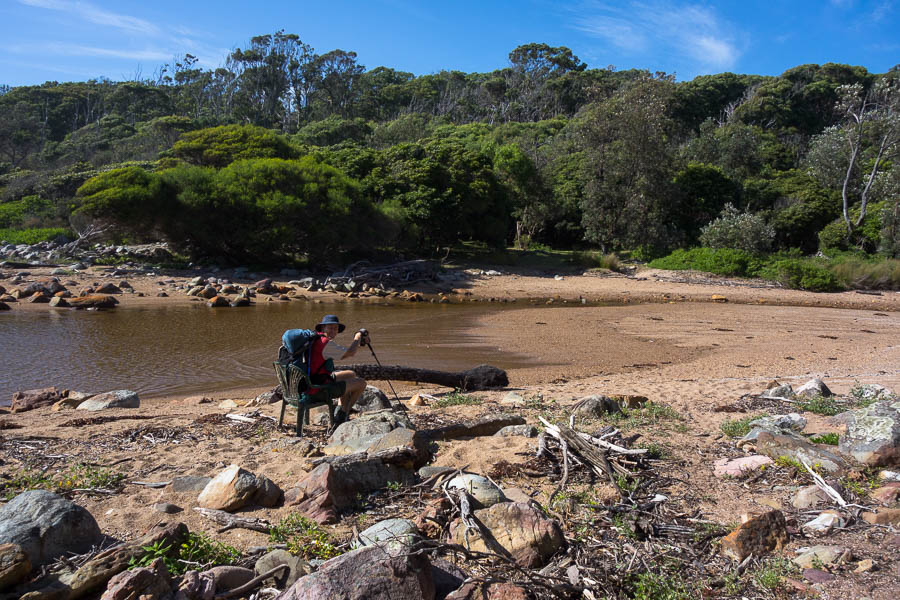 Sitting down on the job at Leatherjacket Bay 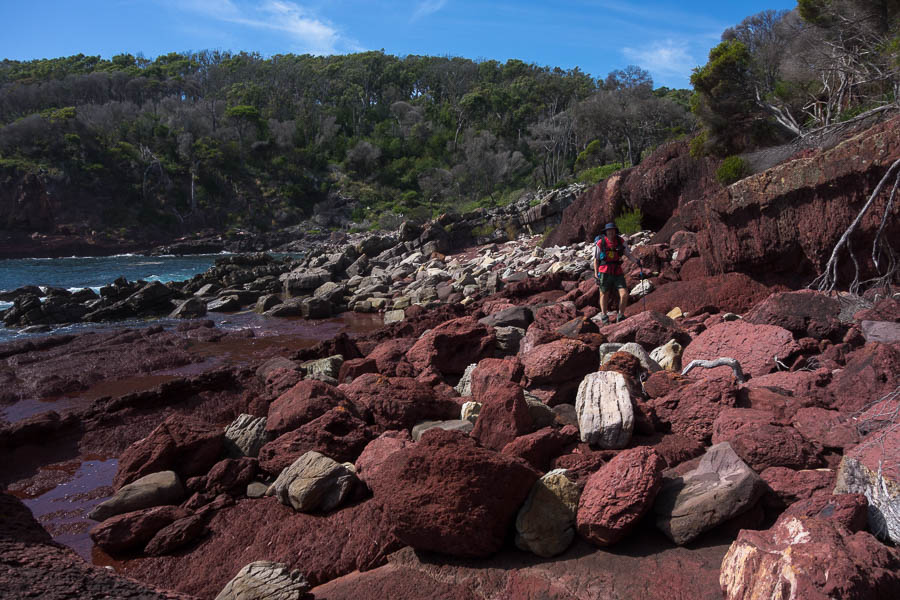 Eventually we started seeing some views of Boyd’s Tower. It was quite the contrast to Green Cape Lighthouse which we’d been able to see for much of the previous day’s walk. There were lots of day visitors at Boyd’s Tower, probably wondering why we were fully kitted out in our overnight gear to walk the 200m from the car park to the tower. 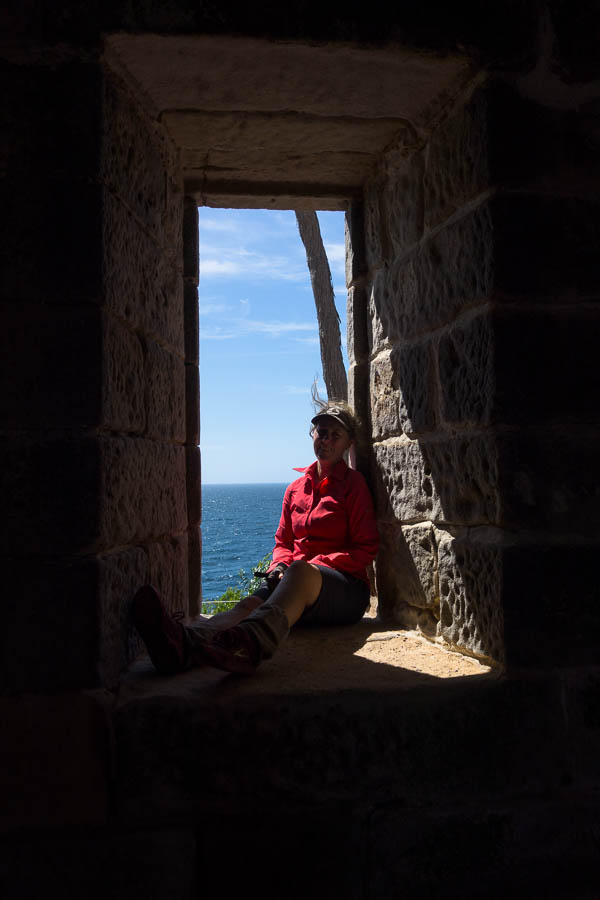 Those are thick walls! 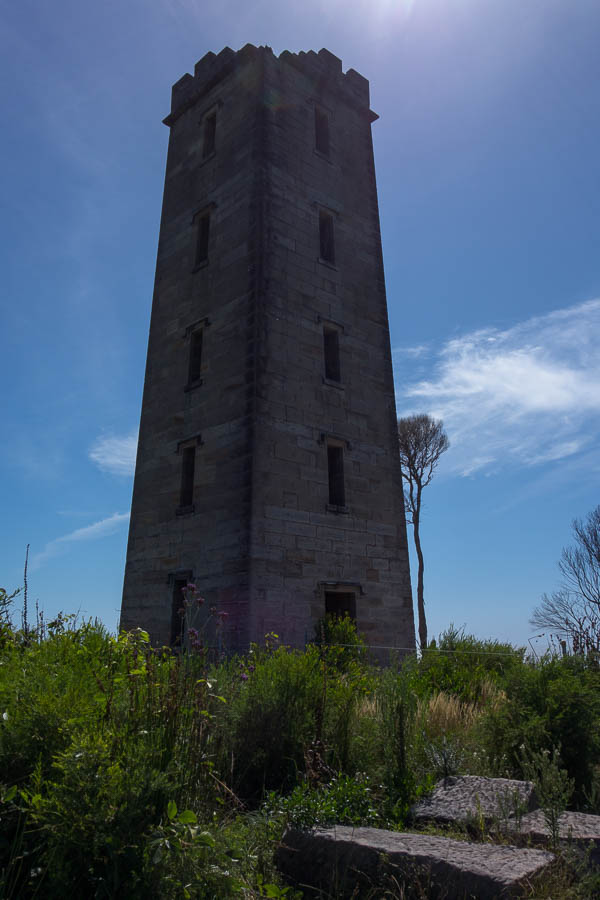 Later that day we went to the Killer Whale Museum in Eden where I saw some photos of the Tower pre-fires. It was surrounded by trees which were at a similar height to the lone one which features in this photo above. It would have been a very different feeling!

We had our final few days of the trip based in Merimbula. On one of the days we did the 9km Kangarutha Track in Bournda National Park. It’s a one-way track, so the simplest way for Tom & I to walk was to go in opposite directions. I dropped Tom off at the southern end and then drove to the northern end. We met about half-way through, passed over the car key, and continued on our way. It appeared to have avoided the fires and had quite a different feel to the Light to Light. Perhaps what the Light to Light would have been like before it burnt?

I realised early on that I had stuffed up the logistical arrangements. The southern end of the walk is in the National Park, nowhere near anything, whereas the northern end is on the outskirts of Tathra. We should have swapped the arrangements – since I walk faster and faff less than Tom so was likely to finish quicker (and did). If we’d swapped it up I would have been able to find a coffee in Tathra before picking him up!