This trip had been put on the Spring Program with no real plan, other than knowing there were plenty of passes into the Colo which I wanted to explore. Eventually I settled on two new passes (to me) – Pass 12 aka Snakebite Pass and Pass 16 aka Meander Pass. Other than myself and Tom no one else in the group had been into this part of the Colo before. It’s always tricky trying to set expectations for what to expect when a) it’s exploratory and b) people can only process information within their existing frame of reference.

I predicted the Canoe Creek car park would be empty so I was little surprised to find 3 cars there already! Not that I expected to see the occupants since our route was going to be well away from the standard routes in the area. We started off walking out along the ridge to Alidade Hill. A lovely ridge which eventually opened up to give us a good views of where we would exit the Colo on Sunday. I was using a map Tom had acquired from an old club member that had annotations on it. They suggested there was a log book at Alidade Hill (or at least had been in 2002 when the notes were made), but a couple of us had a look and couldn’t find it. Of course, as we were about to set off again, Tom managed to locate it at first glance. 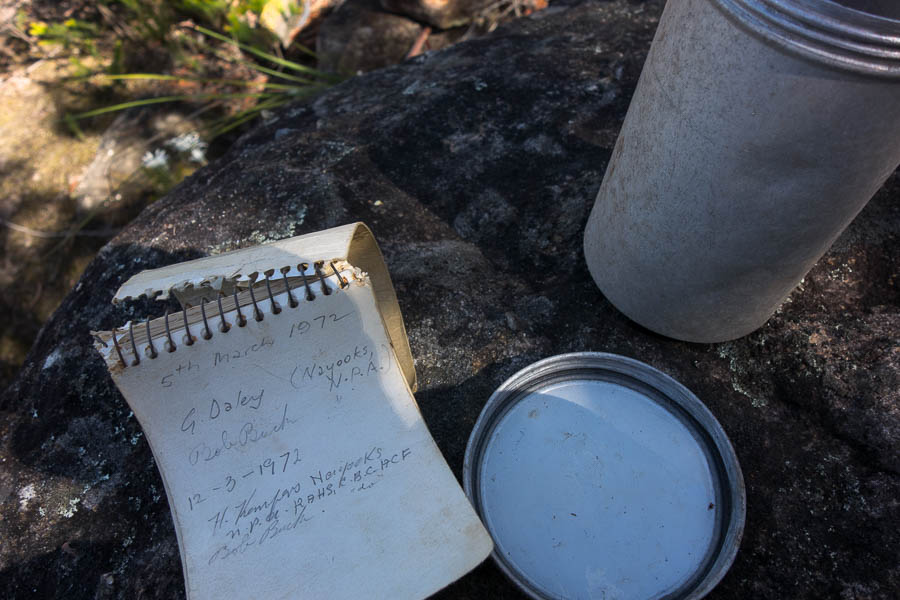 I was disappointed I didn’t have more time to peruse as it went all the way back to 1972. The first entry was from Bob Buck and G Daley who were responsible for the original Colo Pass naming and map. The logbook only had 3 entries in it since 2012, the last being 2015, so I guess either Alidade Hill doesn’t get many visitors, or no one finds the logbook.

Descending Alidade Hill we were soon on the adjoining spur looking down the steep gully which was (the original) Pass 12. 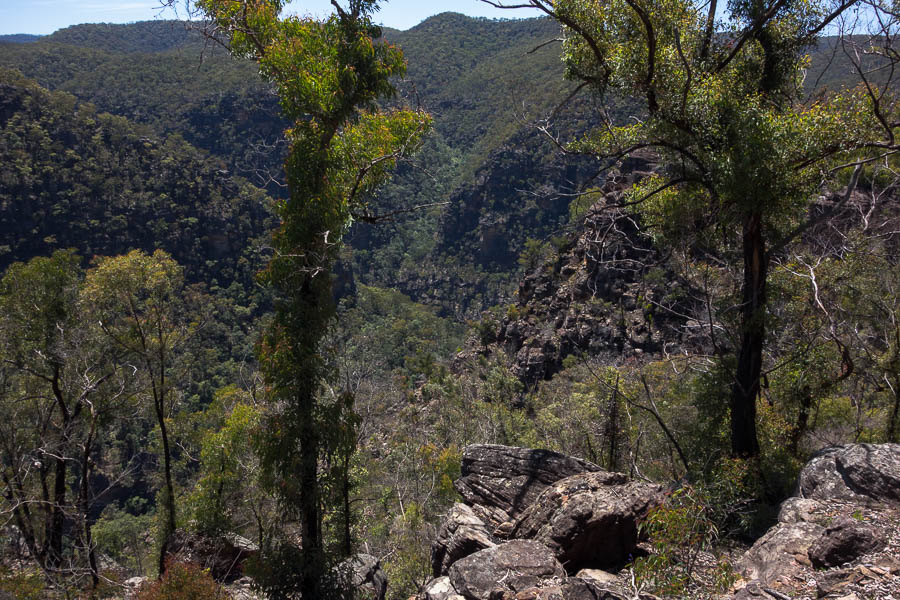 Pass 12 is somewhere down that gully on the right

In the context of Colo Passes it ended up being a straight-forward descent – steep, but no particularly technical or exposed sections. The highlight (for Lauren at least) was a hole some of us squeezed through in the gully. Eventually we arrived at the top of, an expected, impassable (dry) waterfall where we had lunch. 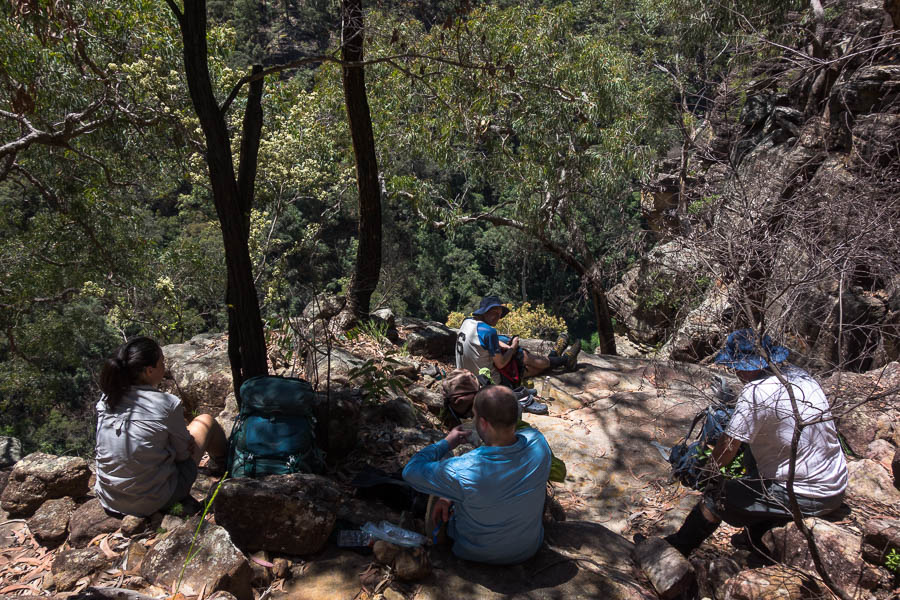 Lunch at the top of an impassable waterfall

It didn’t take long after lunch before we were standing on a delightful (if very glarey) Color River sand bank. I had warned the group it could be a short day if everything went well. Time had been built in for back-tracking if we couldn’t get down the pass. However, as it all went smoothly we arrived at the river shortly before 2pm. A swim was definitely the first item on the agenda. 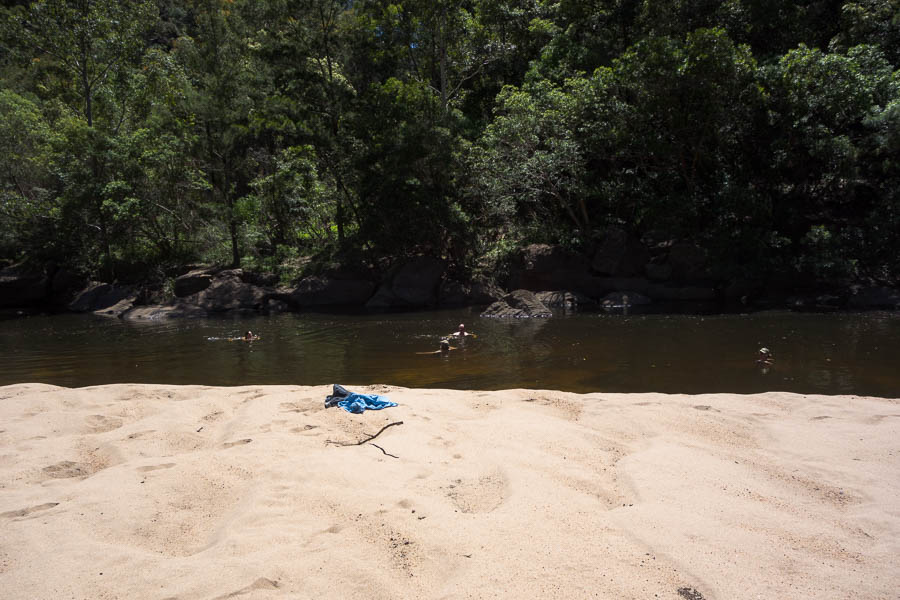 Once we were refreshed we had a fun time boulder scrambling up Pinchgut Creek to get to a scenic waterfall. 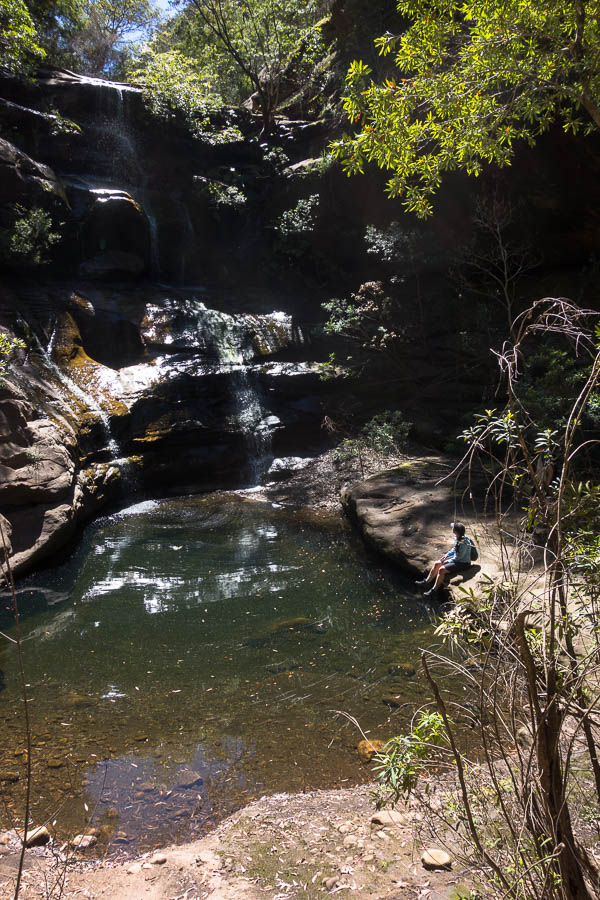 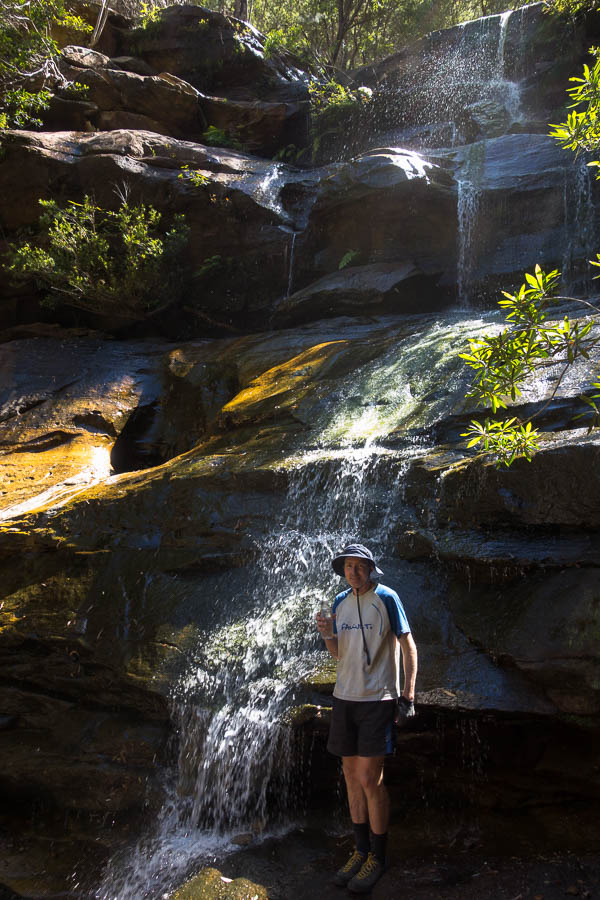 Tom and the waterfall 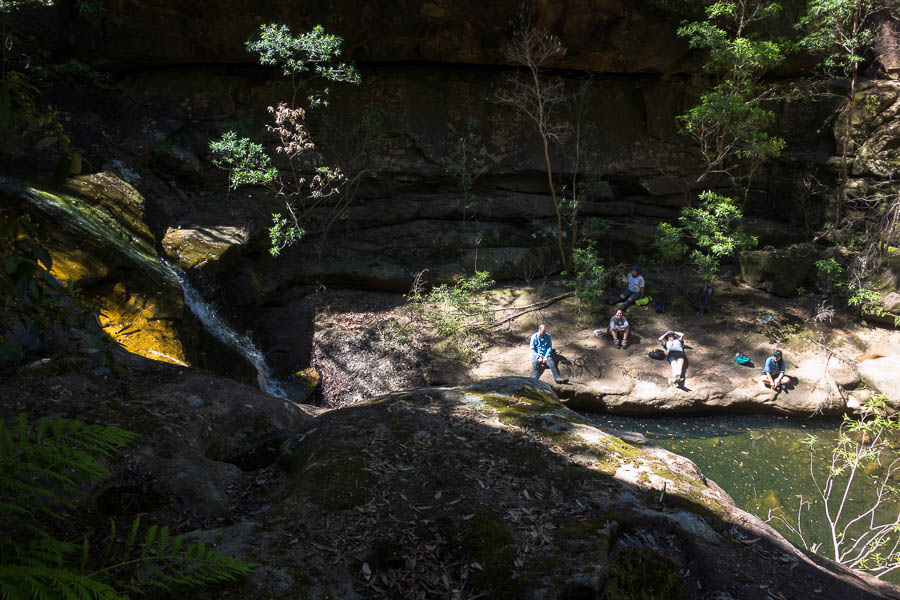 The team enjoying the cooler temperatures

The sun eventually crept over our sandbank allowing us to set up camp and relax. It was a wonderful night for star gazing, no moon light, a clear view of the sky and warm enough to just stretch out on the sand. We spotted many satellites, two shooting stars and a couple of planets. It was almost a shame to retreat into the tent. 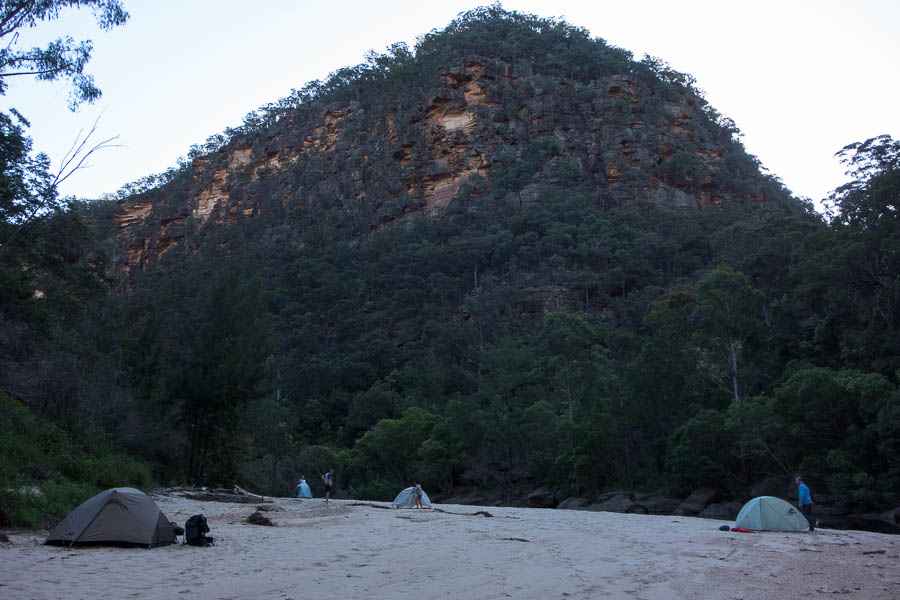 Everyone slept well in the serene surrounds, even if the lyre bird’s wake up call came fairly early in the morning. I was impressed we (almost) got away on time, given how late everyone was to emerge. 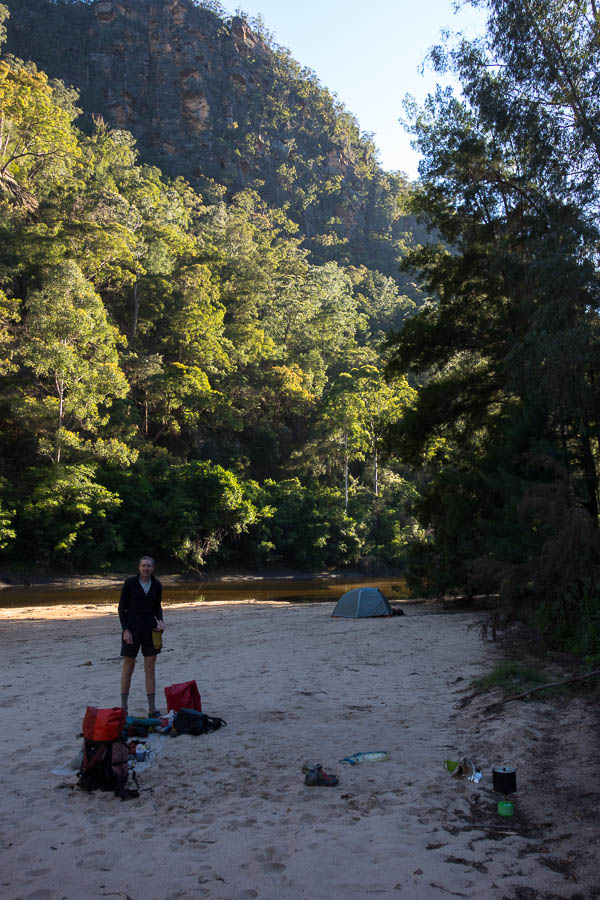 Early morning on the Colo

The Colo had risen over night – my guess was from the thunderstorms on Friday afternoon. Initially we stuck to the true right bank as the river looked deep, dirty and not particularly attractive to be in. The going was typical river bank – through river gums, over boulders – generally giving you a good work out. Tom eventually got jack of that and decided to run some rapids floating on his pack. 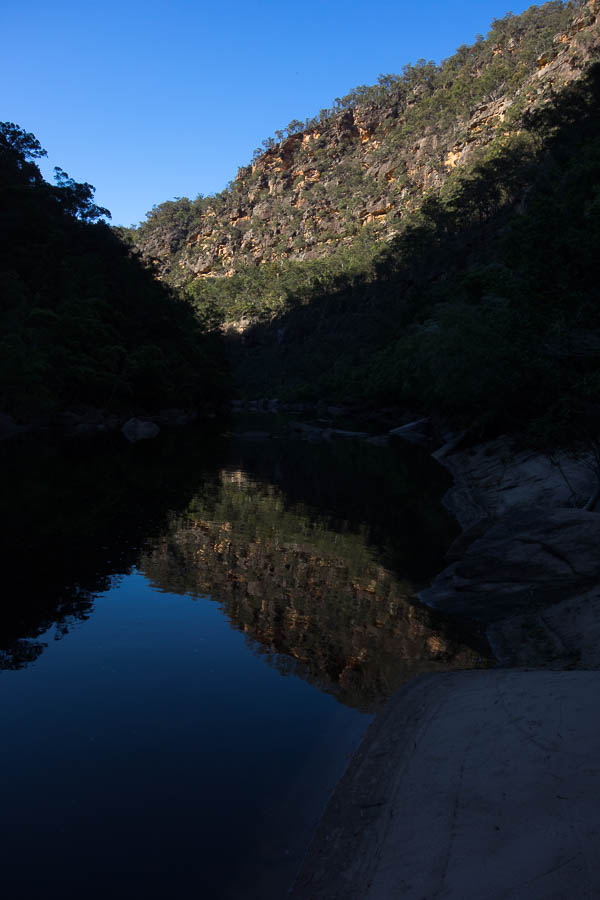 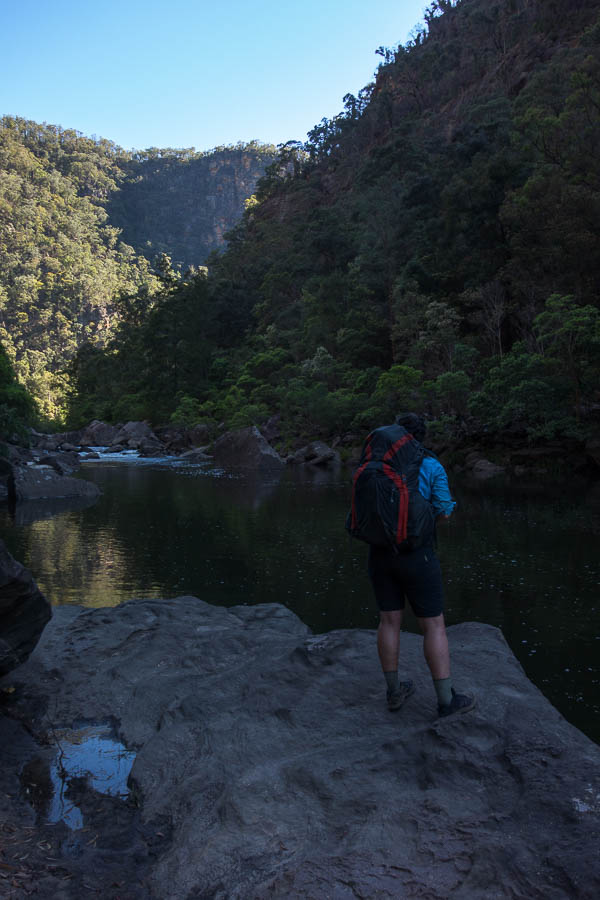 From there we had a divided party for the rest of the morning, with Tom, Lauren, Paul & Clive mostly in the water and Jo & myself largely on the banks. 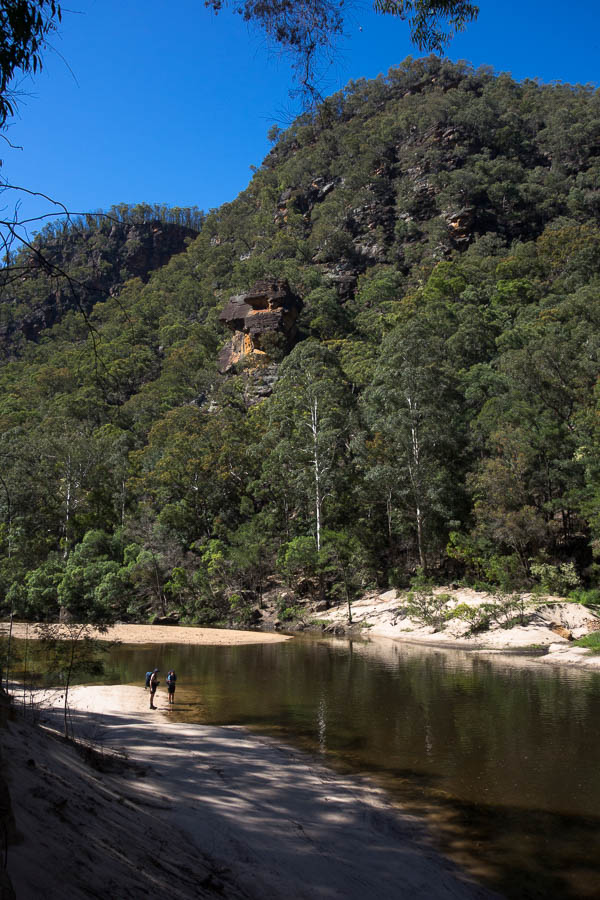 Tom & Lauren (the swimmers) waiting for the rest of us

The swimmers missed out on seeing a diamond python which was not interested in going anywhere, but I’m not bold enough around snakes to have pushed my luck taking photos of it. 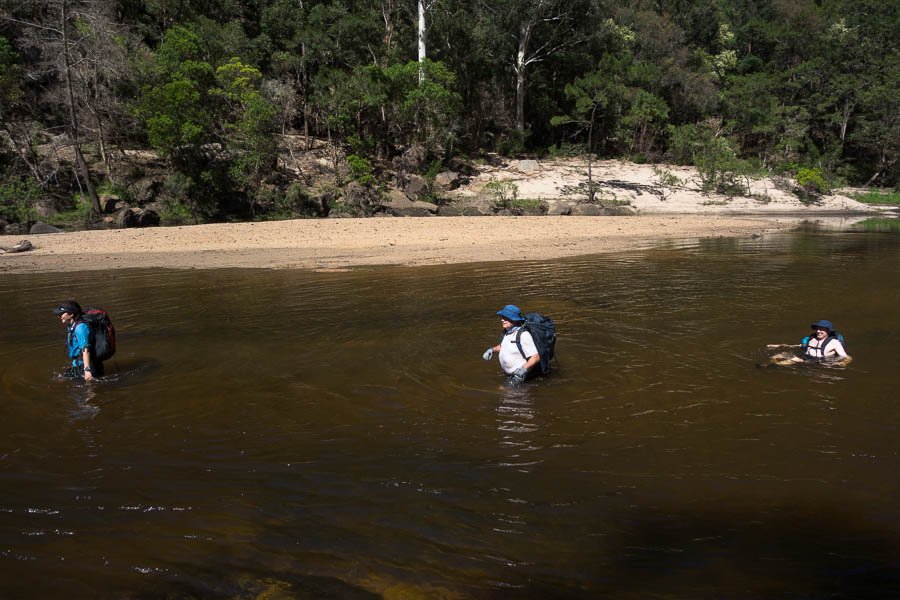 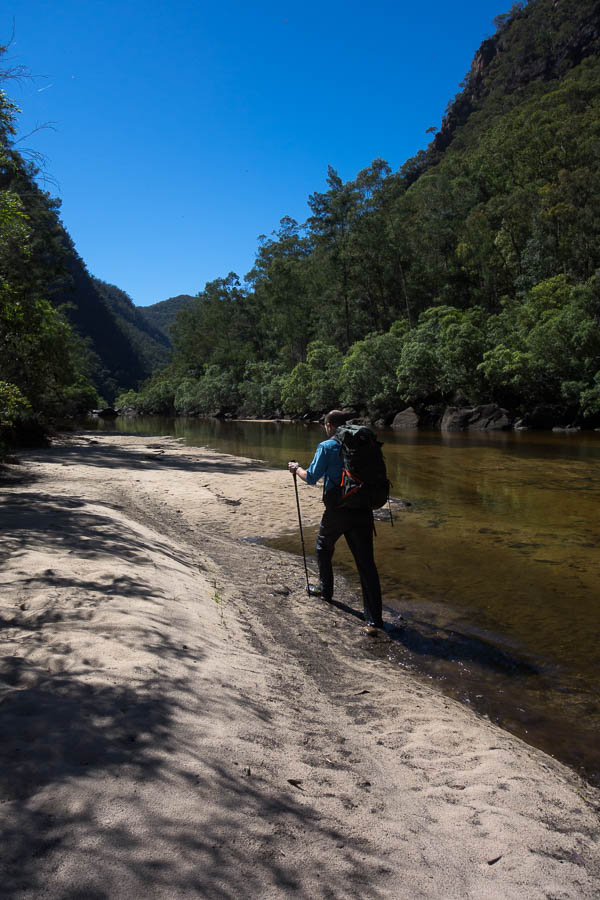 Clive on a sandy section 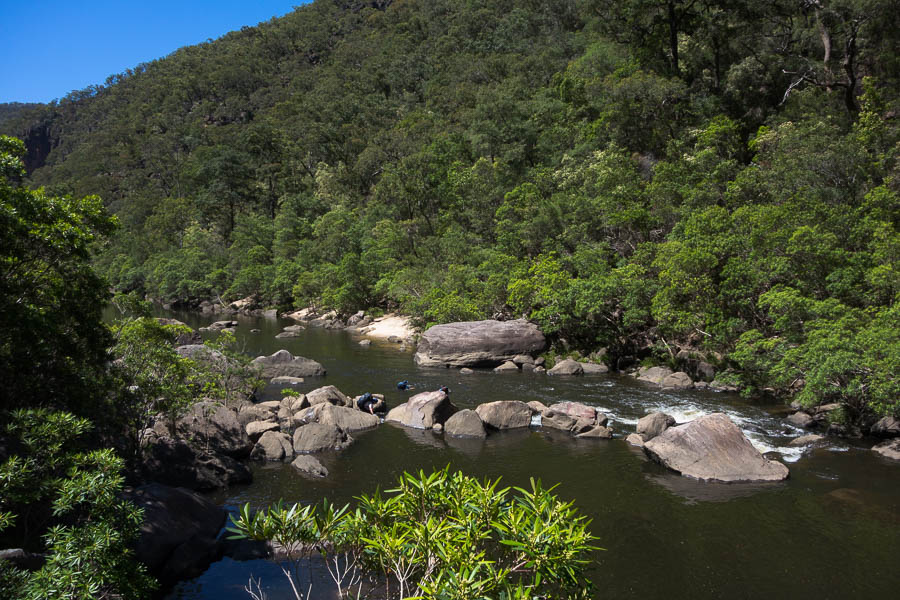 The team negotiating a set of rapids 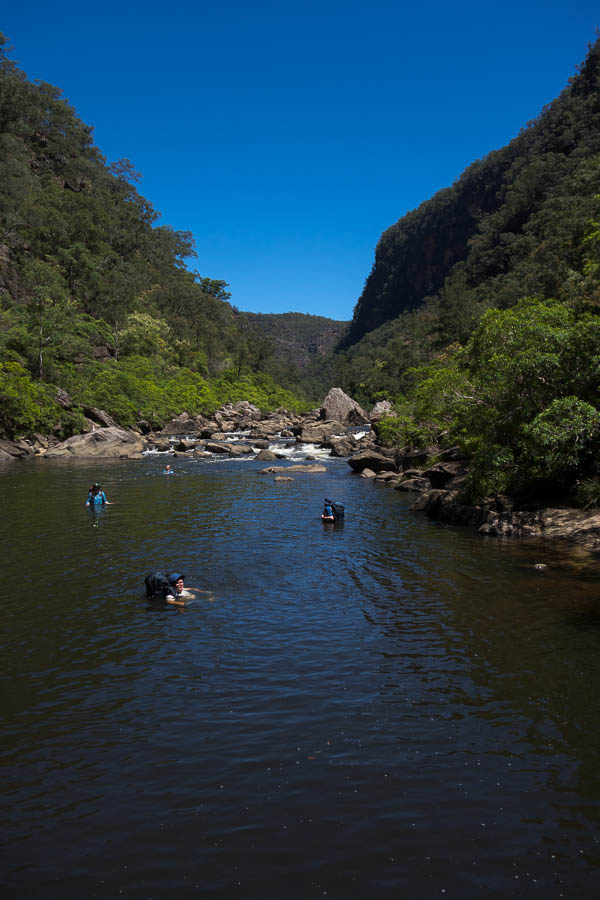 No better place to be on a day like this

Near the Canoe Creek junction we passed a group huddled in a small shady overhang. Further down we passed a fire place which hadn’t been doused, with copious amounts of foil in it. Fires on the sand hold their heat for an incredibly long time, and this was one was very hot. Several litres of water later we were comfortable it was out properly and it wasn’t long before we were at the junction. 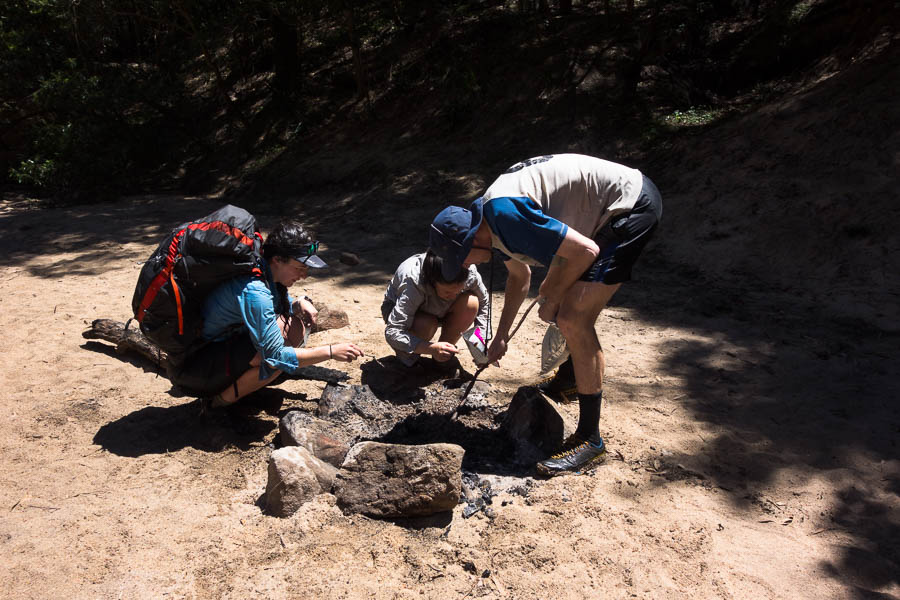 Clearing foil out of, and putting out properly, another parties campfire

After lunch the party from the overhang arrived. They said there had been several groups camped around the junction the previous night, which I assume is why they had ended up in the spot we’d seen them – a not particularly large or flat sand bank. Turned out one of them was the daughter of one of our club members. We exchanged a few anecdotes about her Dad and his fishing before we headed off to tackle Pass 16. 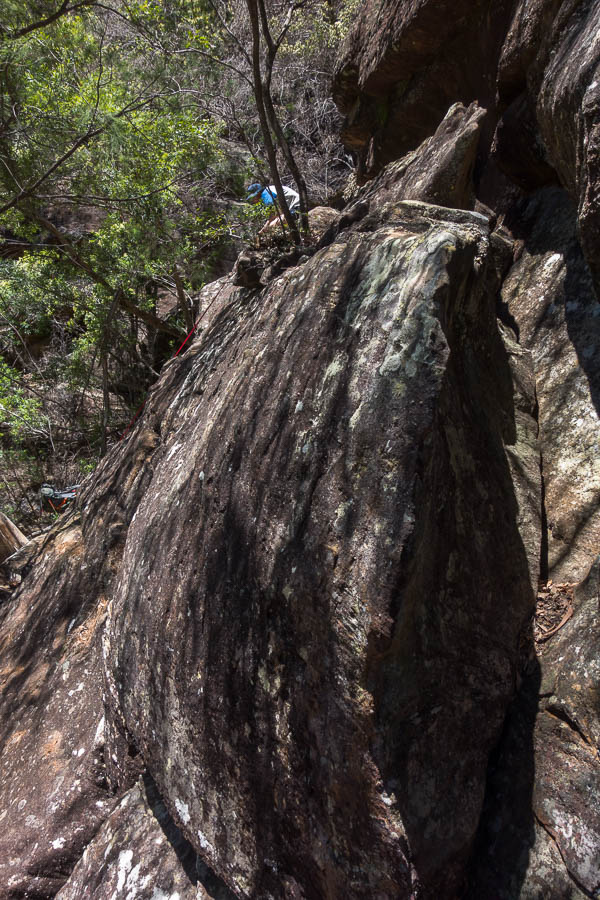 Pass 16 starts using the bottom of Pass 15, which Tom had done twice previously. Tom hadn’t remembered any tricky bits in the lower section of Pass 15, but we found ourselves at a spot which required pack passing. This was perhaps a warning of what was to come. I was possibly lulled into a false sense of ease after Pass 12, along with the description of Pass 16 which said “a steep but relatively easy climb. Rope not required”. What we ended up doing didn’t bear too much resemblance to the Pass 16 description! 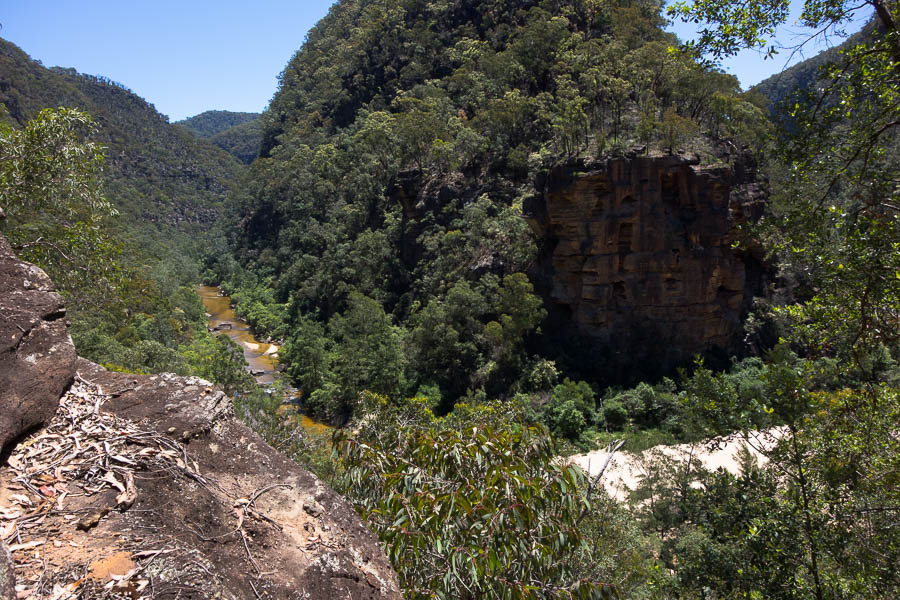 Views of the bend

Not too much further on Tom managed to climb a steep slab and put down a tape for the rest of us. By this point the heat was getting to one of the party, so we had a long break in a conveniently located shady cave. It was a warm weekend – the forecast for Richmond was low 30s. 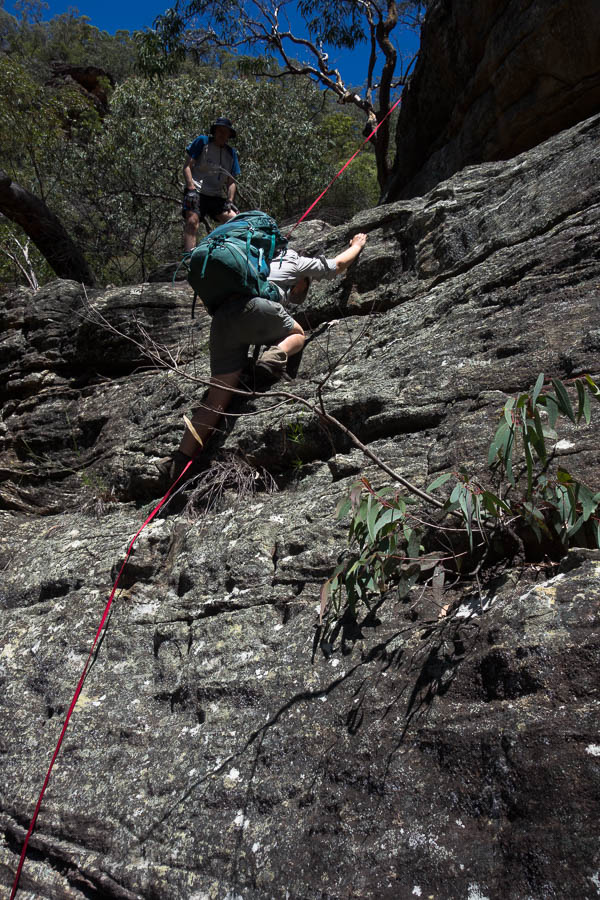 Jo scrambling up a steep section 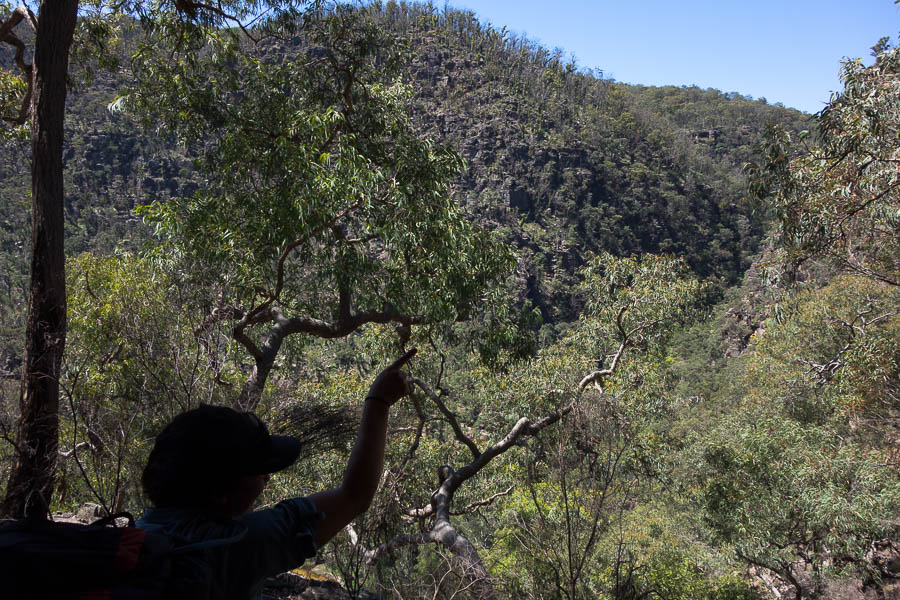 We were over there…

Fortunately from there we were able to stay in a relatively shady gully, with nice rock slabs to scramble up. 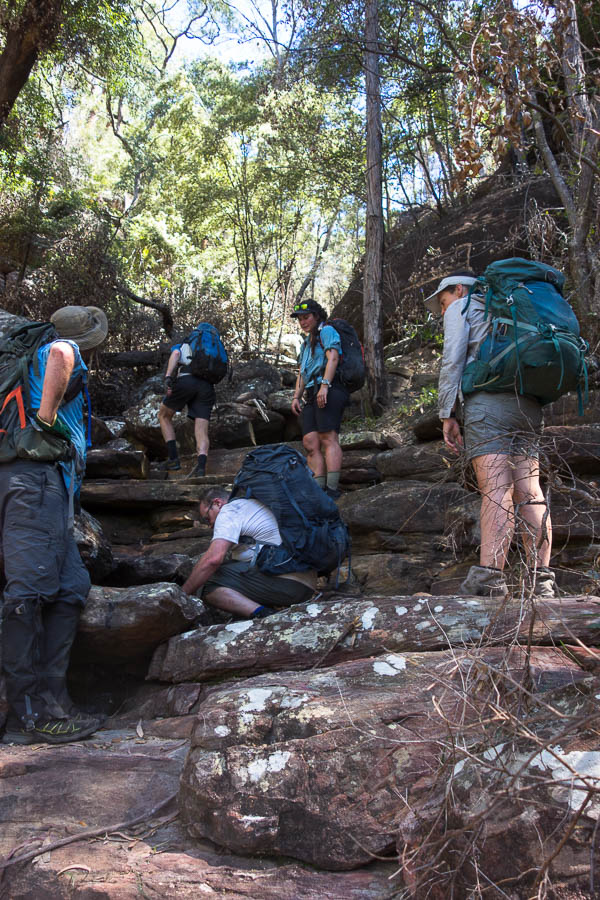 With plenty of breaks to ward off heat stroke we eventually made it up to the main ridge, and then followed it North-East. There were increasingly good viewing platforms which gave us a good view over the route we’d taken for the weekend. 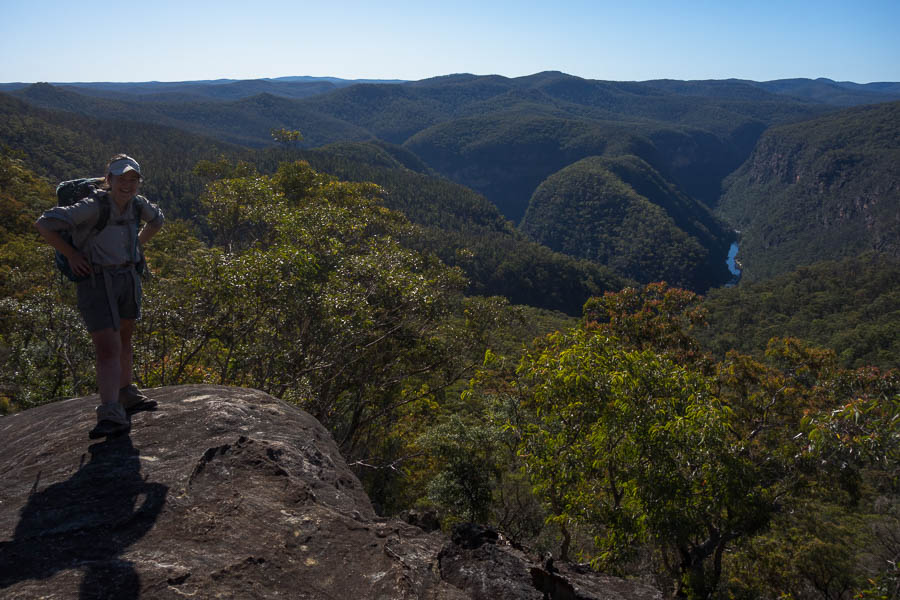 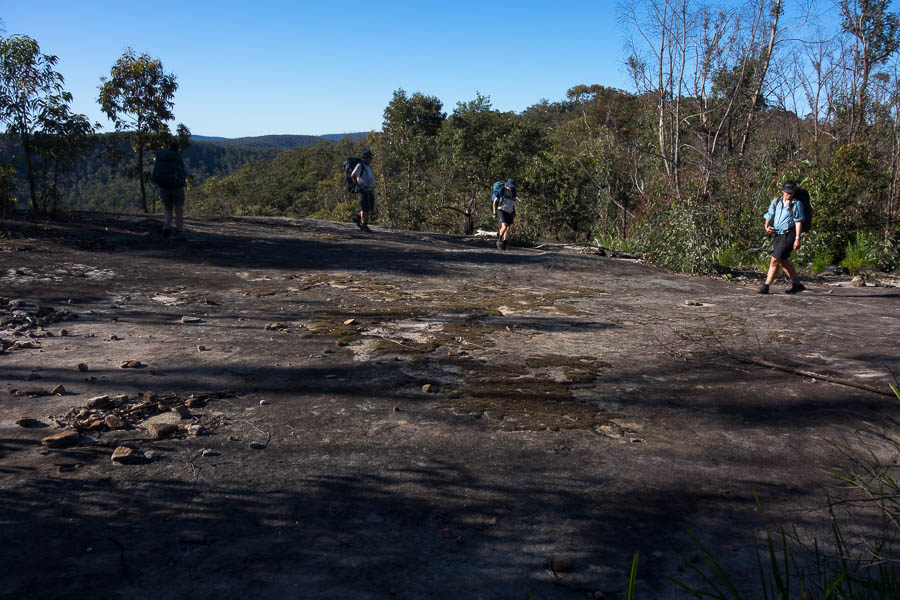 Paul had impressed everyone by not only pulling out Chupa Chups the night before, but remembering the flavours that Tom, Lauren & I had favoured on a previous trip! We had a break once we hit the old fire trail for those of us who’d stashed our Chupa Chups to get them out – a welcome treat while we covered the last few kilometres. Unsurprisingly our cars were the only ones left in the car park at 7pm. It was good to get everyone back intact after a fabulous weekend in rough and rugged country. 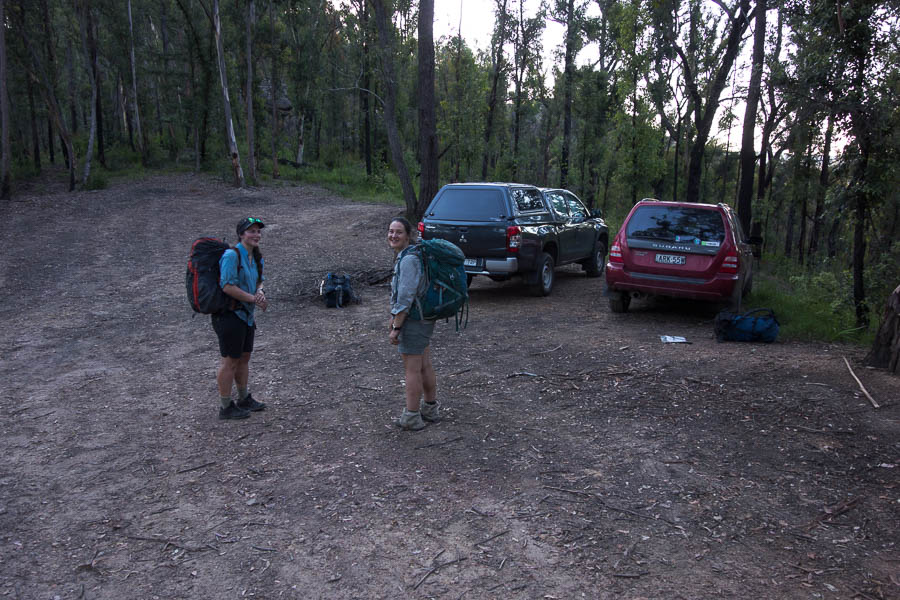 Finally back at the cars at 7pm