It has been a trip which had morphed and changed multiple times. Seemingly quite a lot of angst for nothing, since Vivien was the only one who signed up for the trip in the end. Well, and Tom, by default, but then he pulled out two days before. To cancel? To do something else? To do the planned overnight route? To do the original overnight trip as a day trip? Eventually we settled on my original route but converted to a day trip, using bikes to get between the start and end.

The day didn’t start off so well. After picking up Vivien and entering the Gore Hill Freeway on a different entry to usual I ended up going over the bridge rather than taking the Cahill. After 20 minutes of snaking our way across the city we were eventually back on the M1. No further dramas and we were soon parked at the end of the walk. Riding through the back roads of Woodlands was quite pleasant, the occasional sandy section of road keeping us honest, and an exhilarating downhill (top speed 56.1 km/h) before turning off and ditching the bikes in the bush near the Boxvale Tramway Trail. It was then I realised with my keenness to get going after out slightly late arrival I had forgotten to put on sunscreen back at the car.

Surprisingly, given our city detour, we were walking at 9:05am. The air lacking the crispness it had on my previous Boxvale trip. We were just pleased to be away from Sydney after 36°C day yesterday, and another hot one forecast for today. It wasn’t long till we were tackling the steep incline – silence reigned as we concentrated hard on the descent. At the Nattai it was time for new territory – I’d gone upstream previously, so downstream was a mystery. While never particularly hard going there was quite a lot of climbing over small boulders and route finding through the vegetated banks. 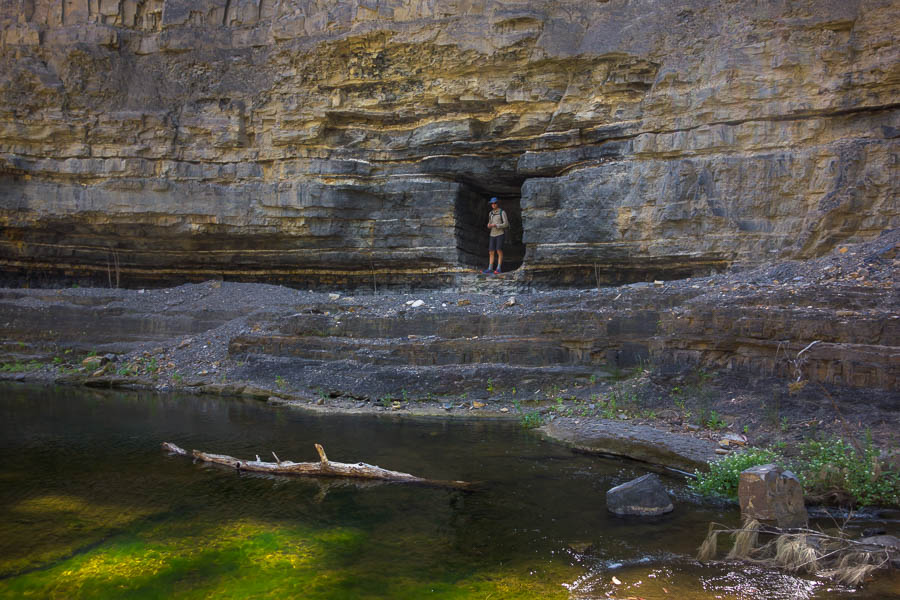 Vivien in an old mine shaft 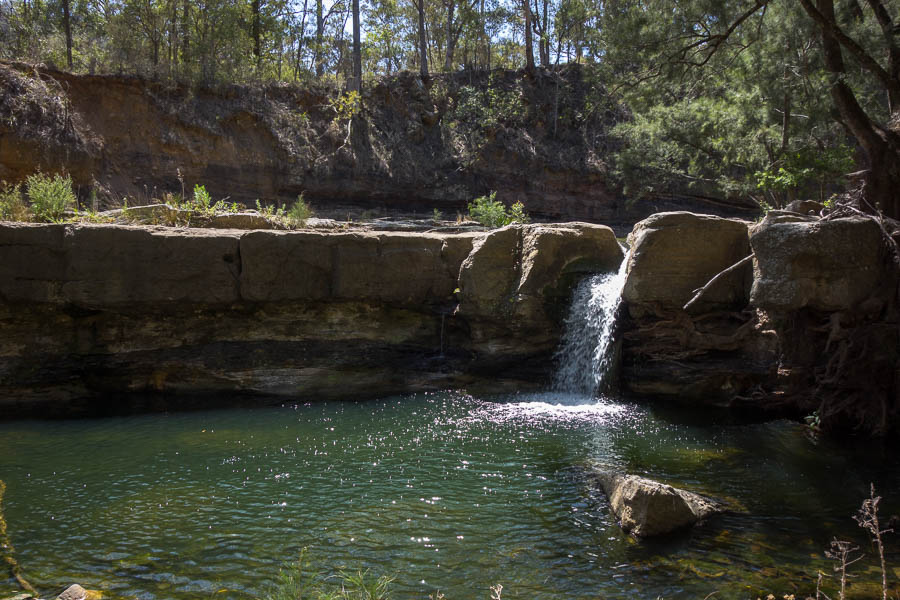 The nature of the river changed after morning tea (and the junction with Drapers Creek). I was now back on previously visited territory. The walking was very pleasant – sections of rocky slabs, interspersed with open, slightly rocky, banks. Vivien and I picked our own routes as we criss-crossed our way downstream. Being just the two of us we made pretty good time, scrambling when we felt like it – whether it was to avoid a vegetated bank or just because it looked like fun! 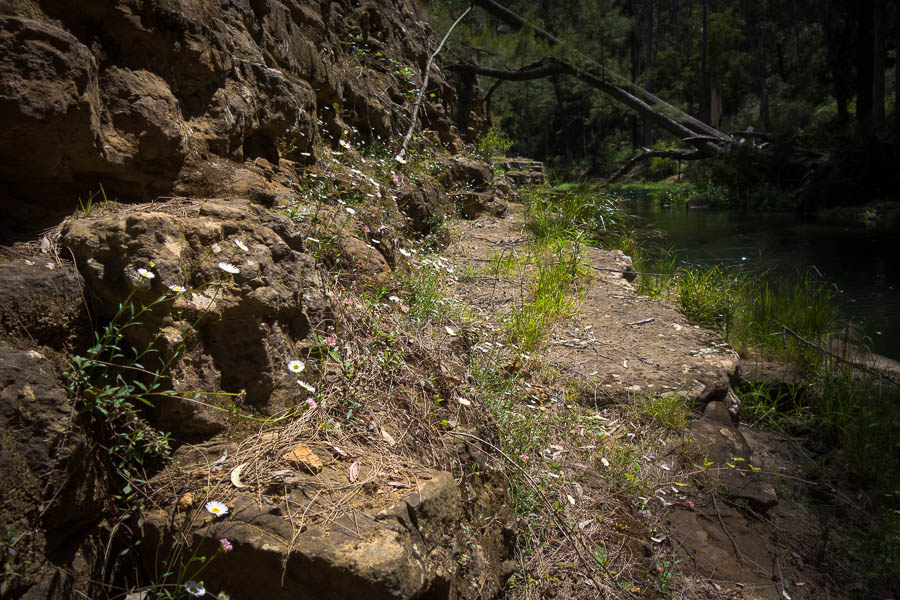 There were thousands of daisies everywhere 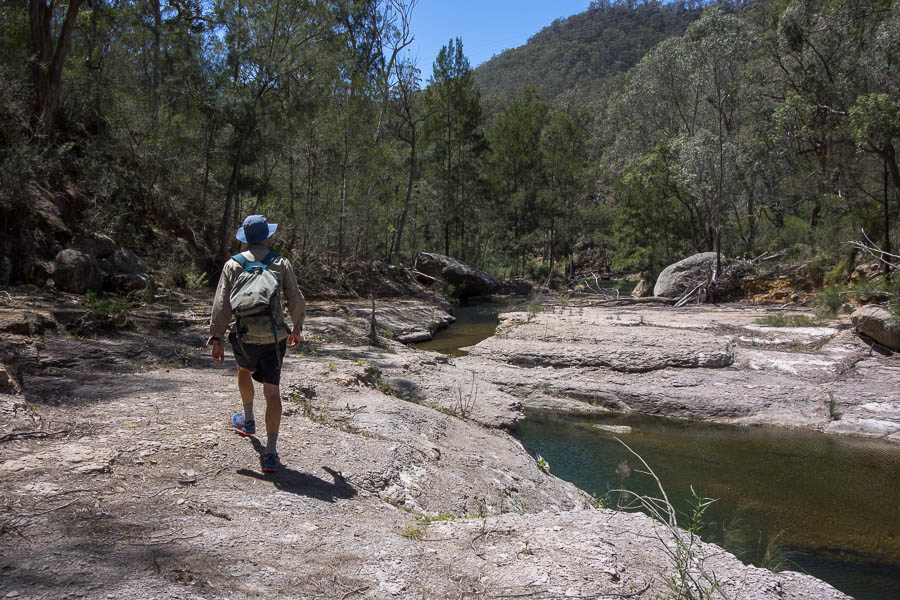 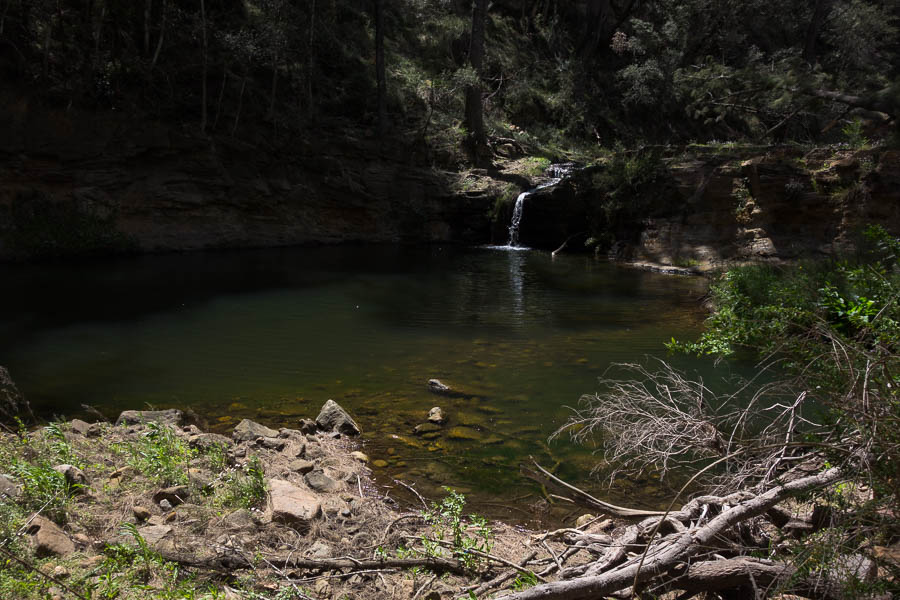 Another lovely pool and waterfall

There were a few waterfalls along the way and some nice pools (if you didn’t look too deep and see the algae). 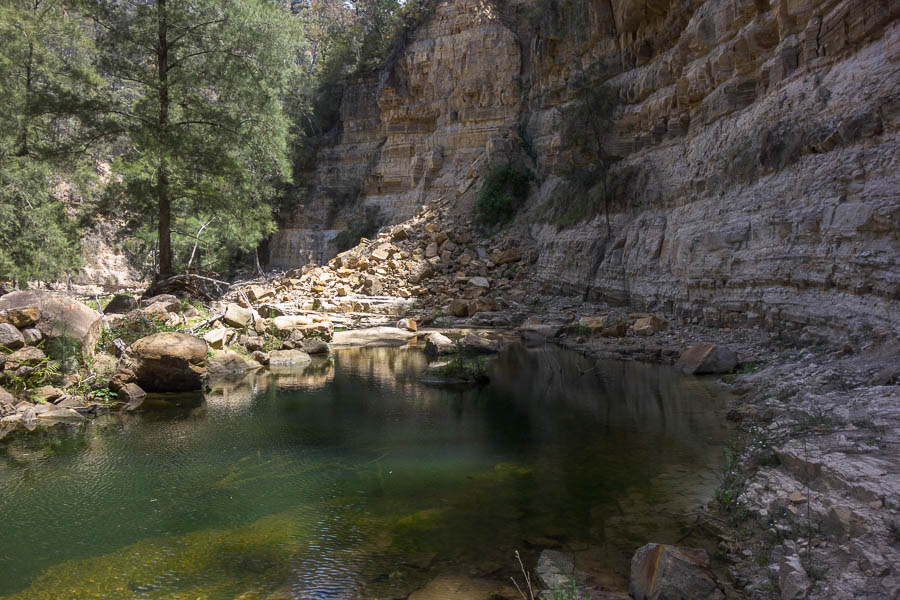 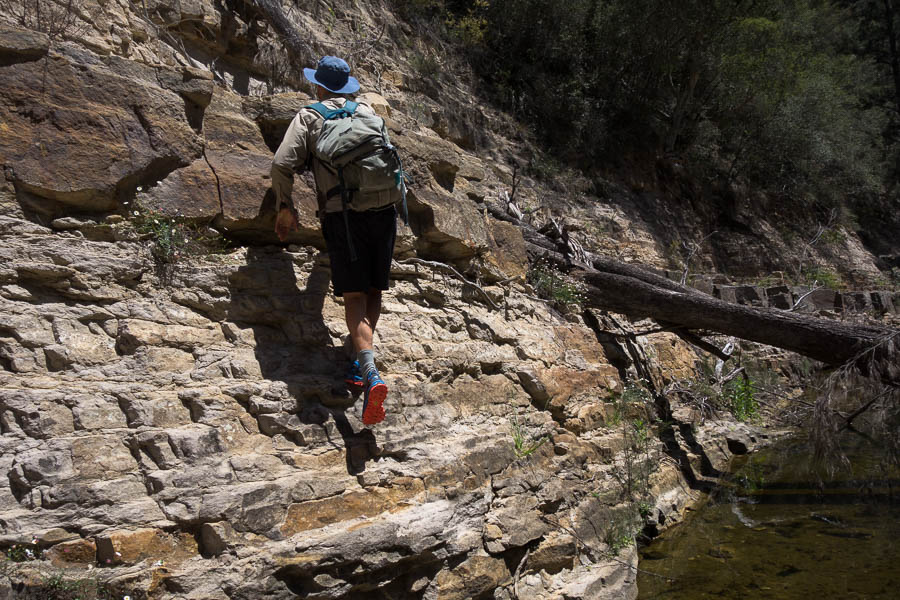 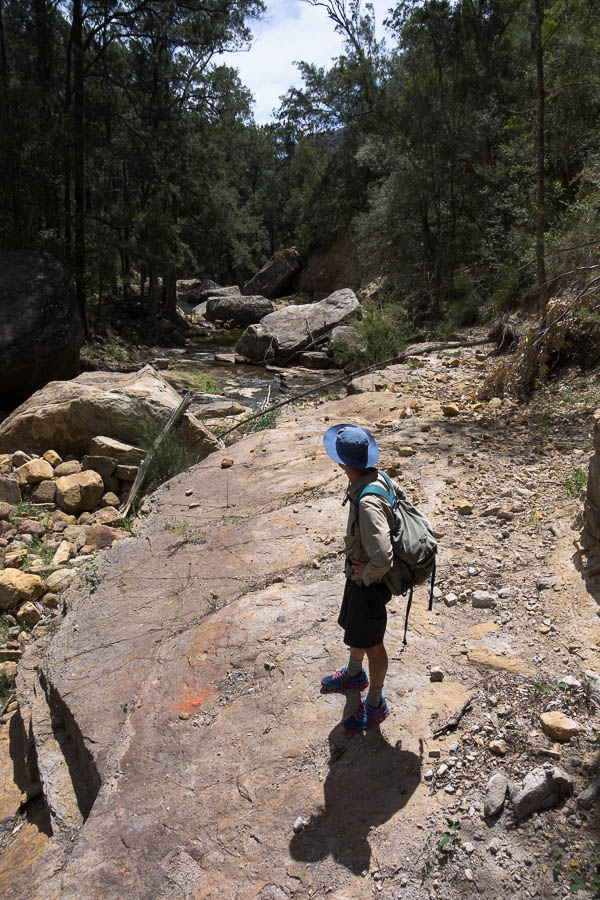 We made it to my intended lunch spot about 1:15pm, and learning from morning tea, we immediately had a swim. The forecast wind suddenly picked up while we were having lunch so Vivien almost had to have a second swim after some of his stuff ended up in the pool. After a few minutes of holding down my slices of cheese and other assorted bits and pieces the strongest gusts died off. 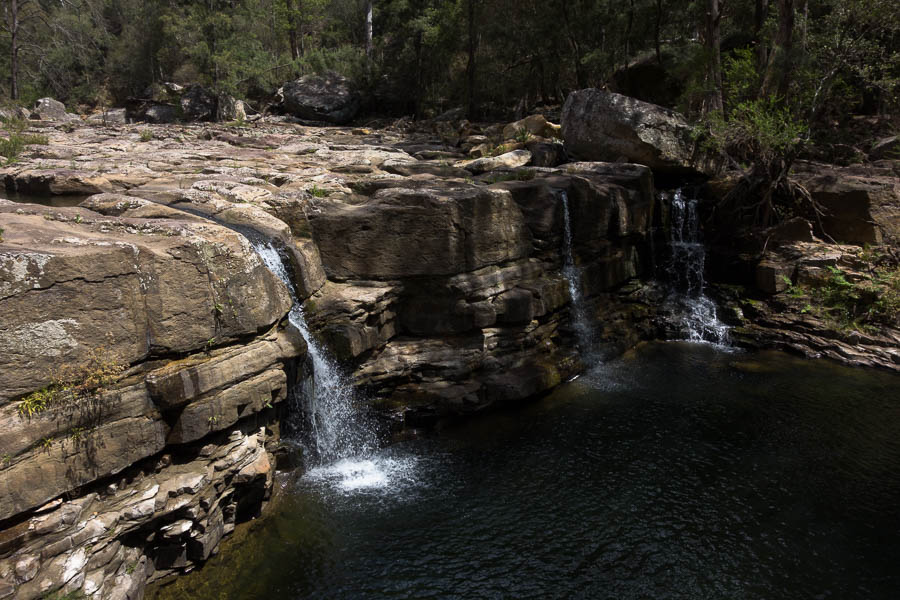 We headed back upstream, found our exit creek and surprisingly quickly we were over Mt Waratah. 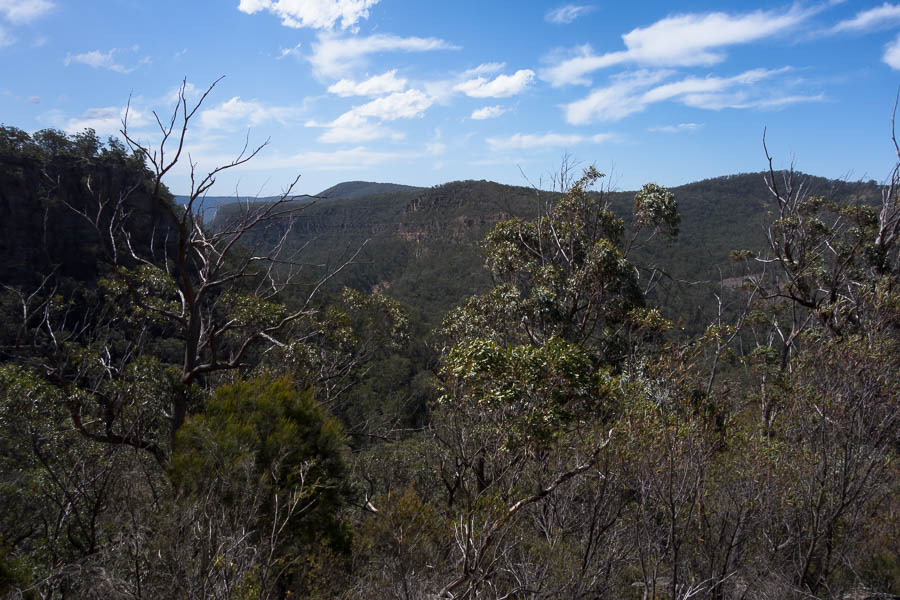 Views on our walk out

Back at the cars around 3:30pm, and having to collect the bikes on the way out, meant we were a bit late for the cafes in Mittagong. Fortunately the RSL does a decent selection of sweet treats so we didn’t miss out. A great day out.
Wildlife count – 3 red belly black snakes, 2 lyrebirds, 2 black piglets, plenty of skinks, water dragons and darters.