We’d only visited Bonnum Pic once previously, back in 2013, and we hadn’t taken a tape. That meant unfinished business as we hadn’t gone right to end. I was nursing a calf injury so needed something flat-ish and short-ish; Tom was keen on high camps for sunset/sunrise photography; and with the unfinished business of getting to the end… I thought it was a genius idea to do this walk again but this time as an overnight trip. We had one of the most leisurely starts I can remember for a walk – leaving the cars at 11:40am. There were quite a few cars at the start so we figured we’d see the various day trippers at some point in the afternoon. 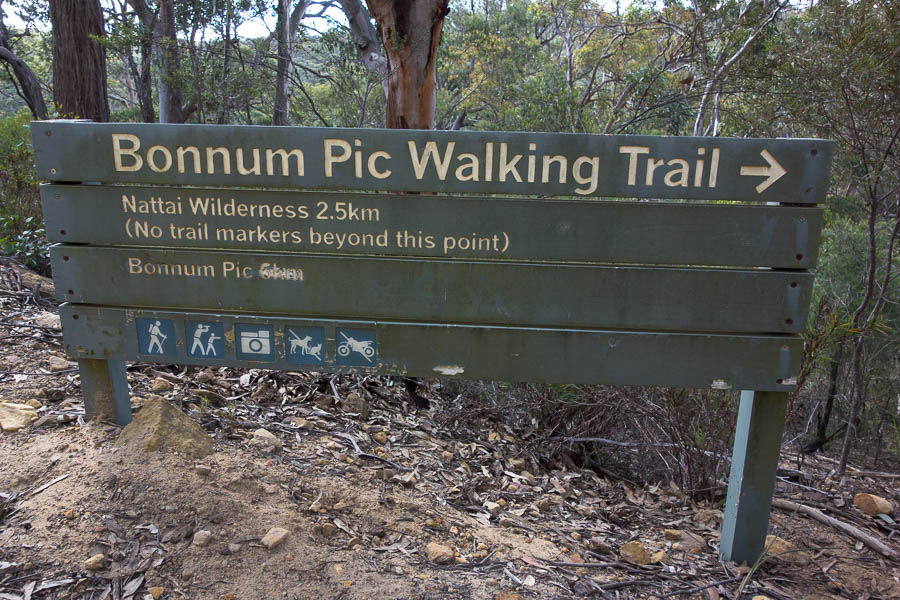 I’d seen some comments on bushwalk.com about an ‘obvious’ camp so I wasn’t really looking out for campsites as we made our way along the cliff edge. But by the time we hit some of the more scrambly section we hadn’t seen anything obvious and it looked unlikely that there was going to be anything in front of us. Ditching packs we continued walking out along the narrowing ridge – glad to have the extra agility now being packless! 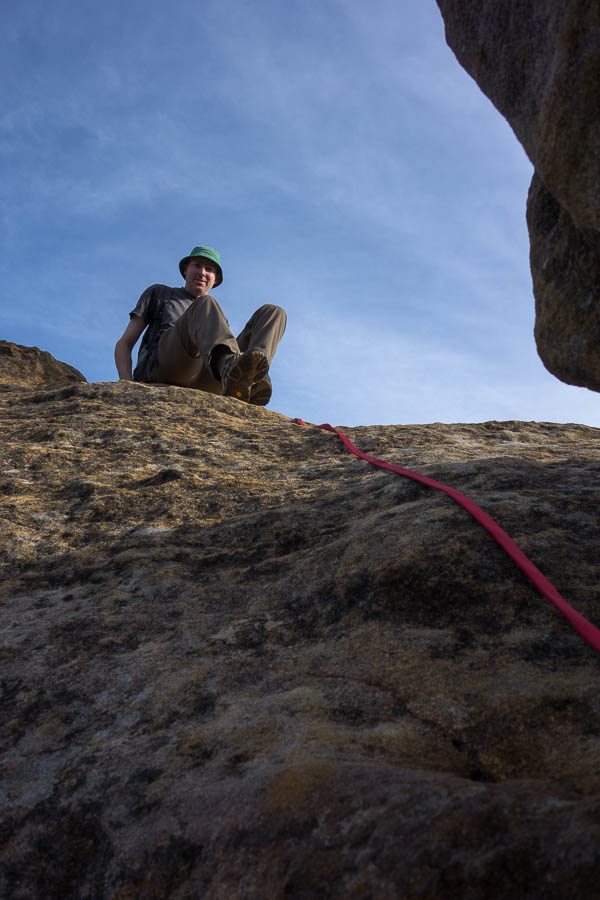 Tom doing the ‘slide of death’

At the slide of death we had a bit of discussion of which tree to anchor off and whether the tape was actually doing anything other than being a mental aid! Lewis elected to stay there and enjoy the views while Tom & I made our way to the end – new territory. We found the log book – for a few years it seemed to be dominated by SBW’s John K who seemed to have an entry every other page. 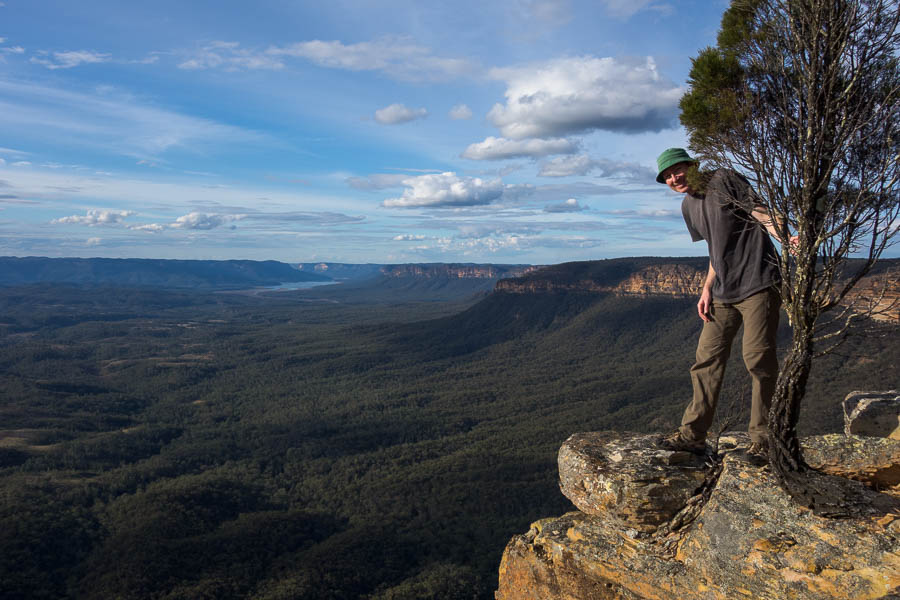 Low dam levels in the distance

The dam levels are noticeably low – not a surprise but sometimes having a visual makes things feel more real. 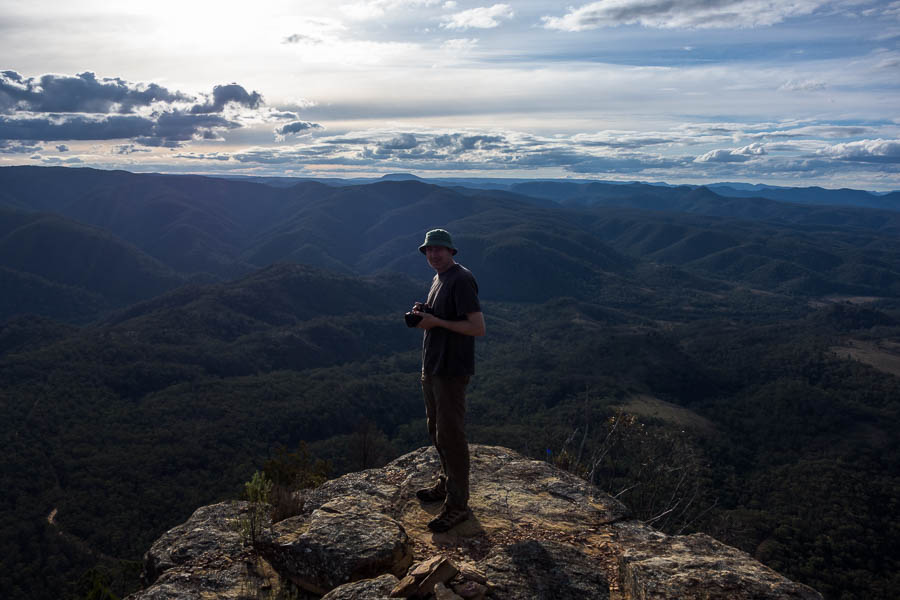 The end of the pic 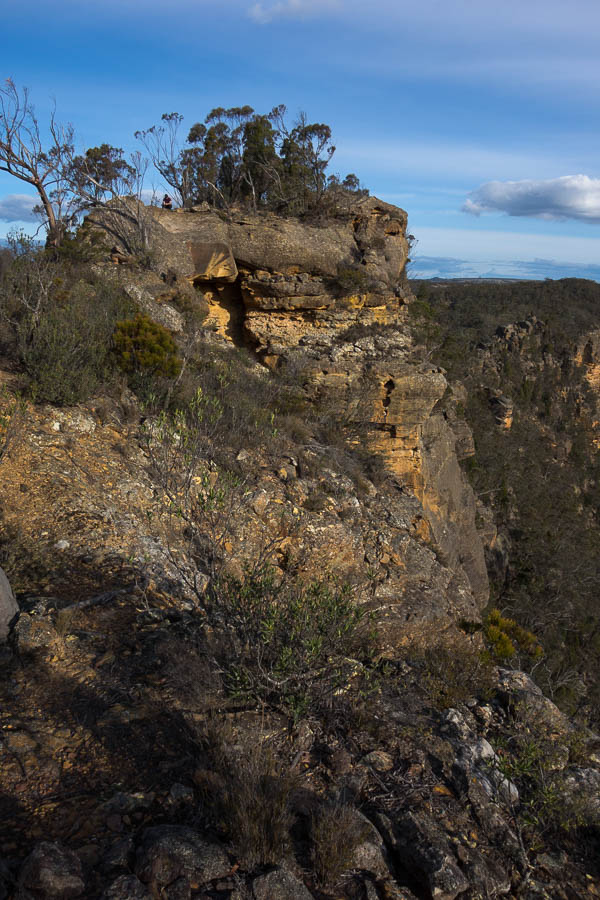 Lewis waiting above the slide

Getting back up the slide was the harder bit. I managed to get my left leg stuck in the crack which took a while to wriggle out of. Tom did the same thing before deciding that facing forward rather than out was a better option. 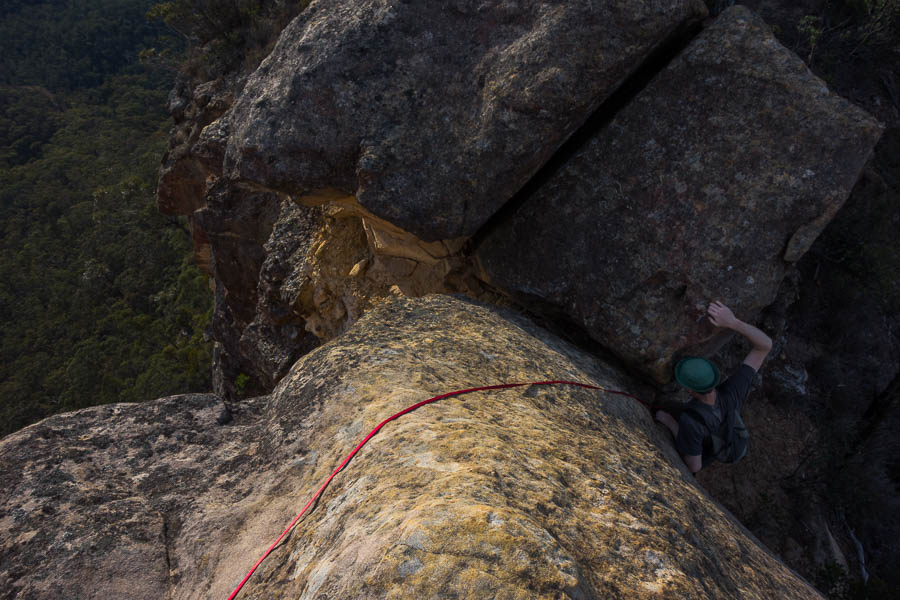 Now the hard bit getting back up

Going facing into the rock meant the tape was definitely more than just a mental aid! 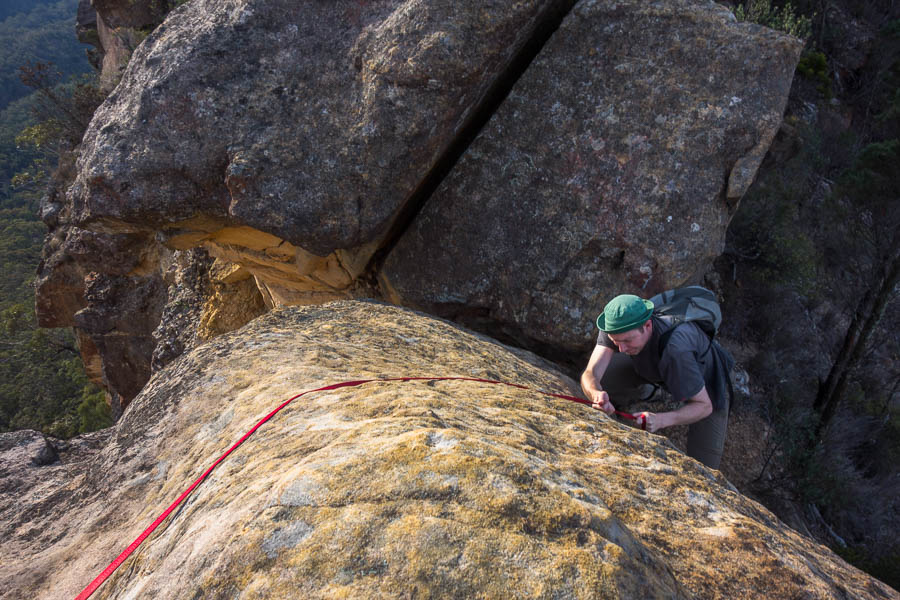 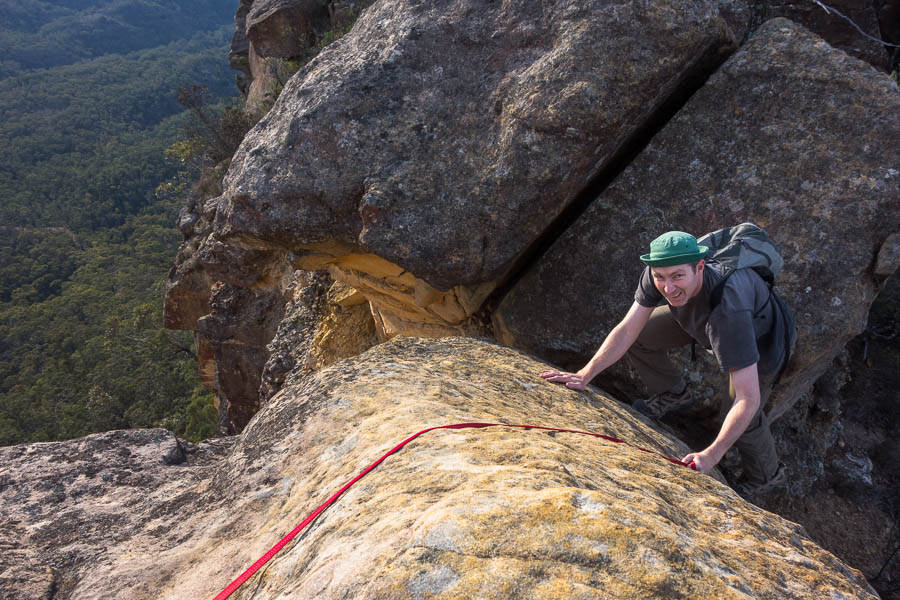 So now we had to find a camp – one that clearly wasn’t that obvious since we hadn’t seen it on our way out. We back tracked up onto the last flatish plateau and split up to look for options. There wasn’t anything great, but with only 3 of us we didn’t need much flat space. The good thing about being up on the ridge was there was definitely no need to collect firewood. 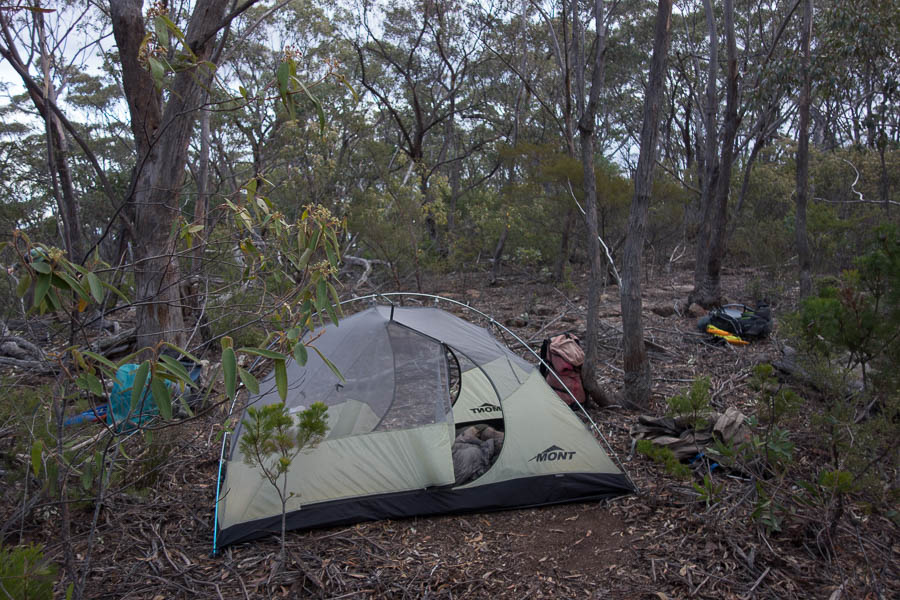 After happy hour on the cliffs for sunset we made it back to the campsite before dark. We had pleasant night around the fire and retired to bed at bushwalker’s midnight. 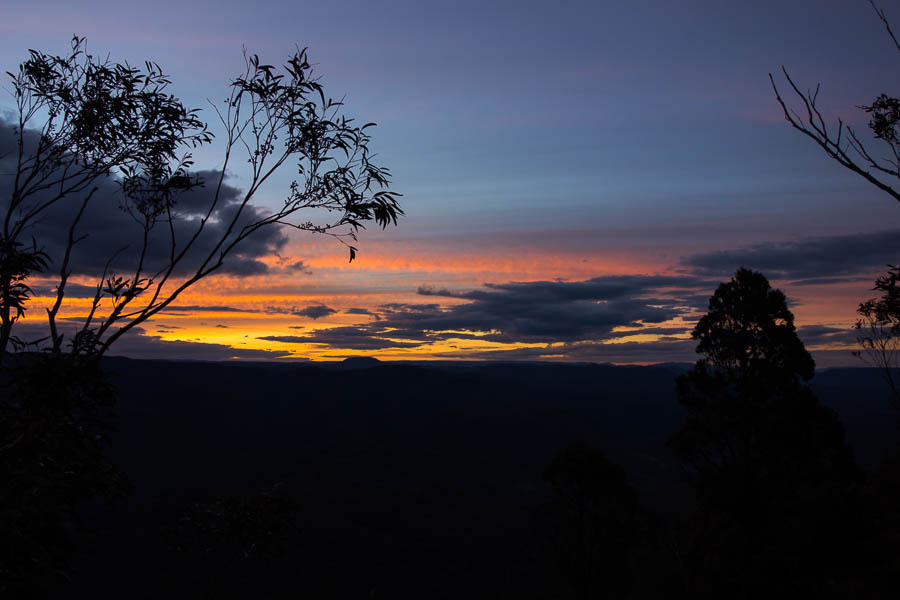 With no time pressure the next day Tom of course got up before dawn for some sunrise photography. It was a glorious walk back along the pagodas with the morning light. We managed to stay on the cliff edge a lot more compared to our ‘inland’ route the previous day, which gave lots more views and fun on the pagodas. 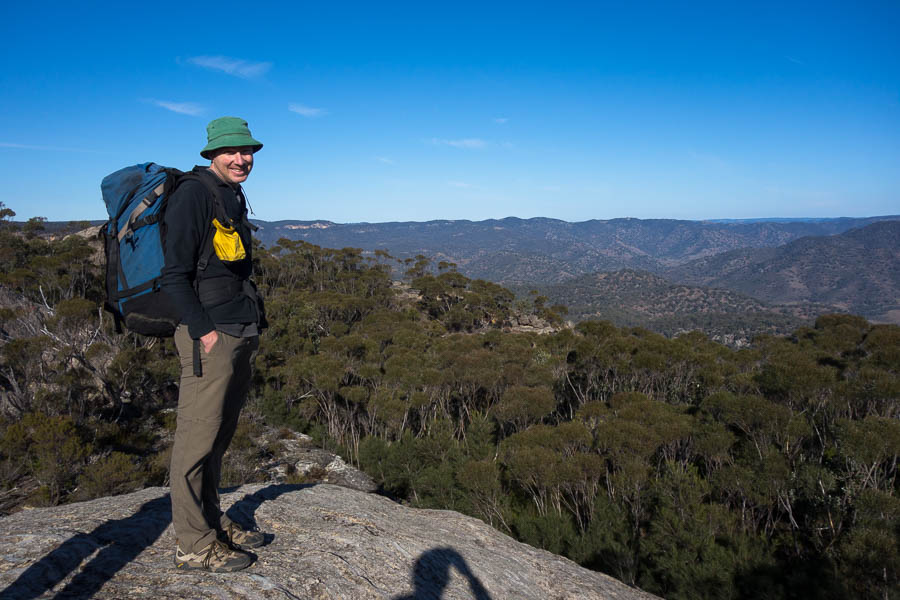 On the way back 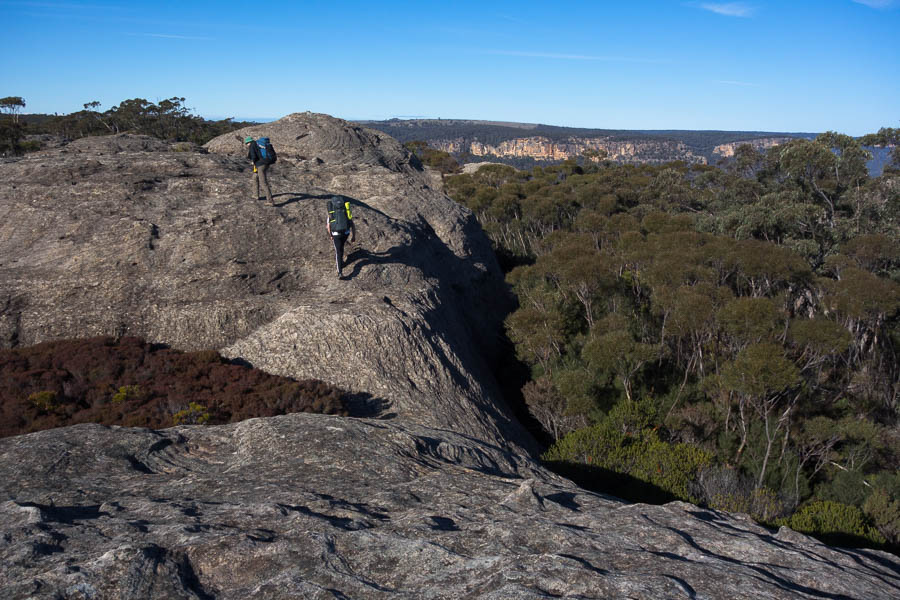 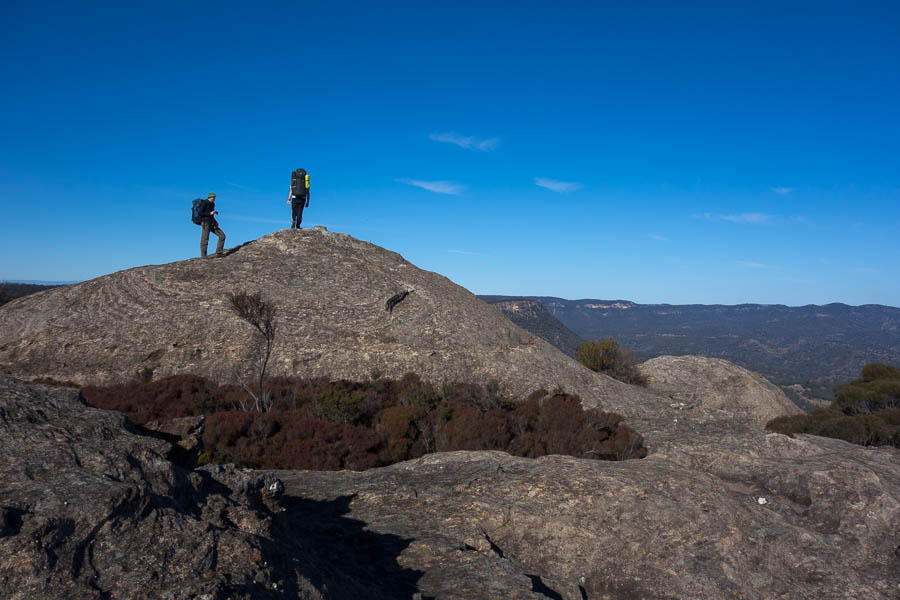 We had morning tea out on another rocky outcrop before winding our way back through the bush. At the fence line we met another walker who sounded like he had spent a couple of hours just getting to that point – trying 3 different routes before finally ending up there. We wished him luck in getting out to the cliffs, but it was a reminder that the walk isn’t completely straightforward if you’re not used to following rough footpads. 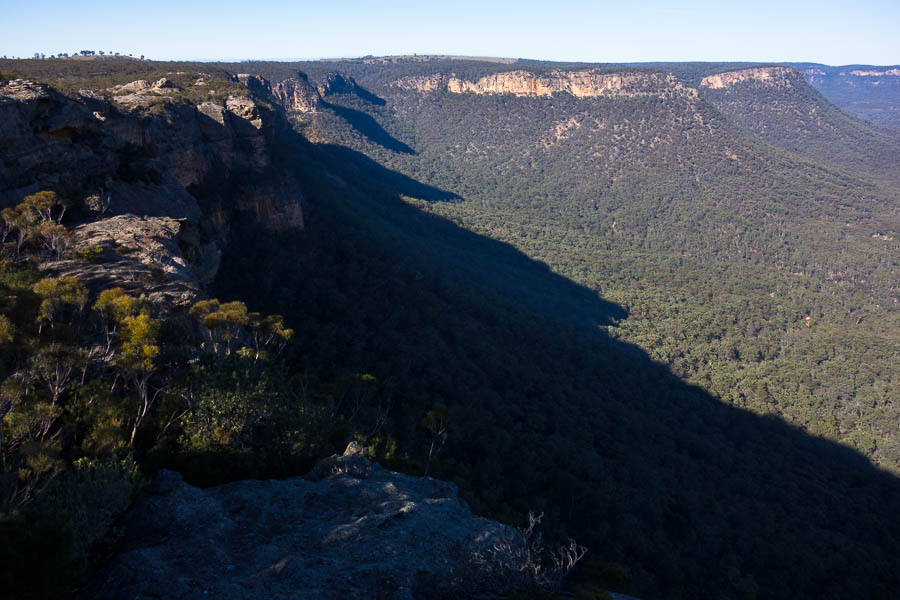 We were back in Mittagong at lunch time – a great, if short, walk in the bush.