After visiting the Four Heads of Asgard Plateau a couple of months earlier for Nicole’s fondue weekend I decided it would be a good walk to add to the SBW program. We had explored the various heads over a couple of days, but I figured it wouldn’t be too hard to work out where I was going on a day walk.

The walk proved a popular one on the program and I had to turn away quite a few people once I hit my (self-imposed) cap of 12. On the day we had 11 and despite the forecast predicting a cloudy, cool day it was pretty warm and humid. 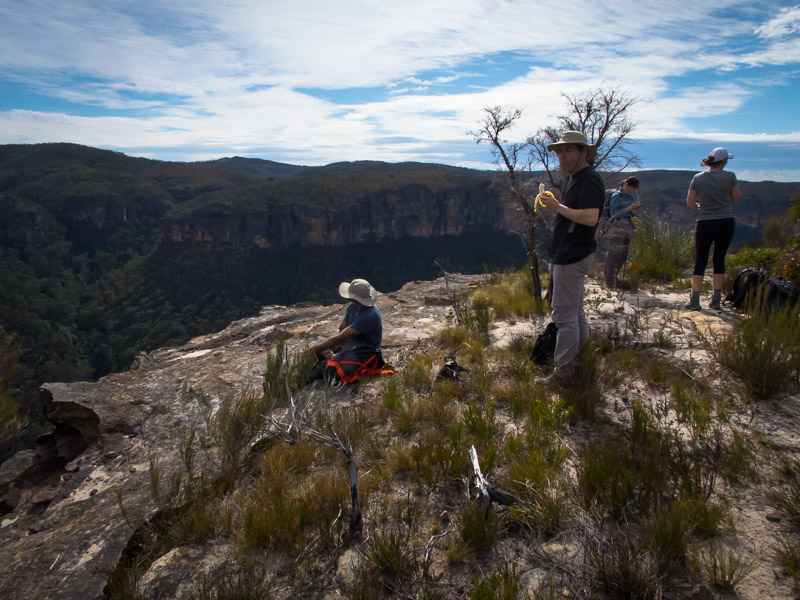 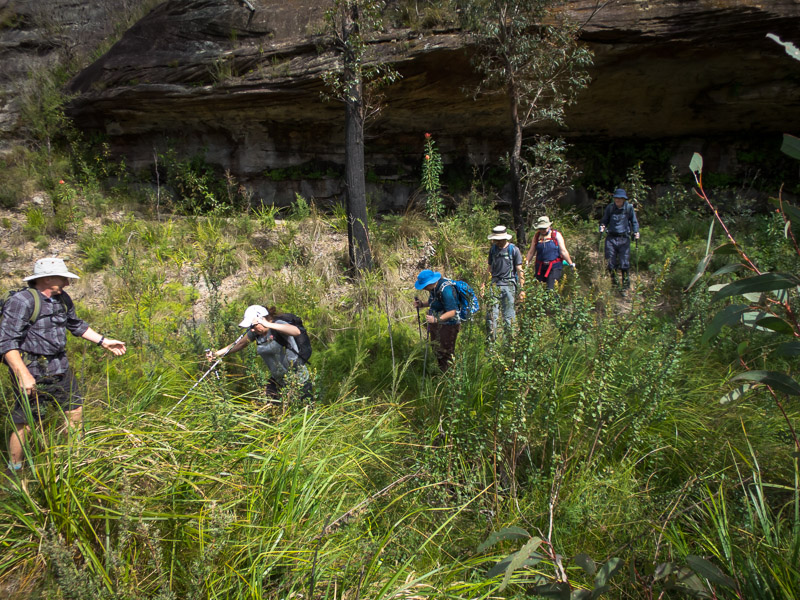 Crossing the creek near Girraween Cave 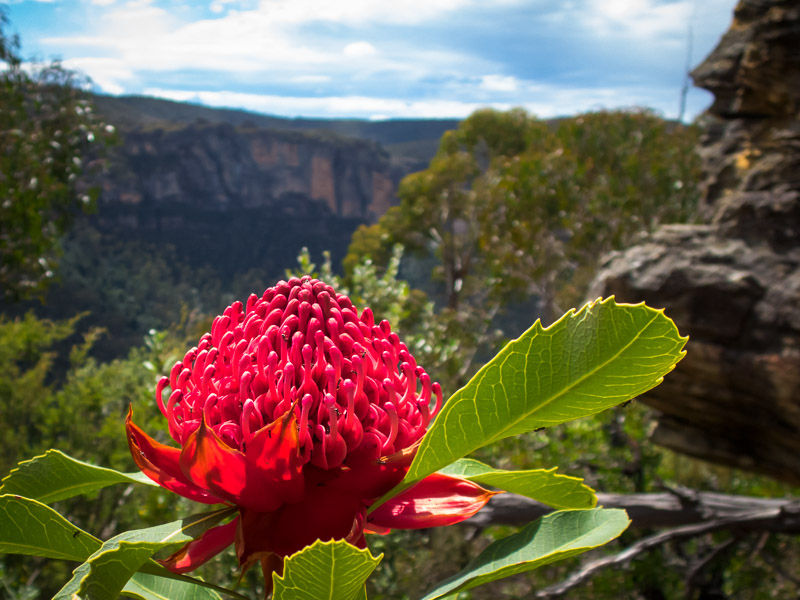 Lots of waratahs were out 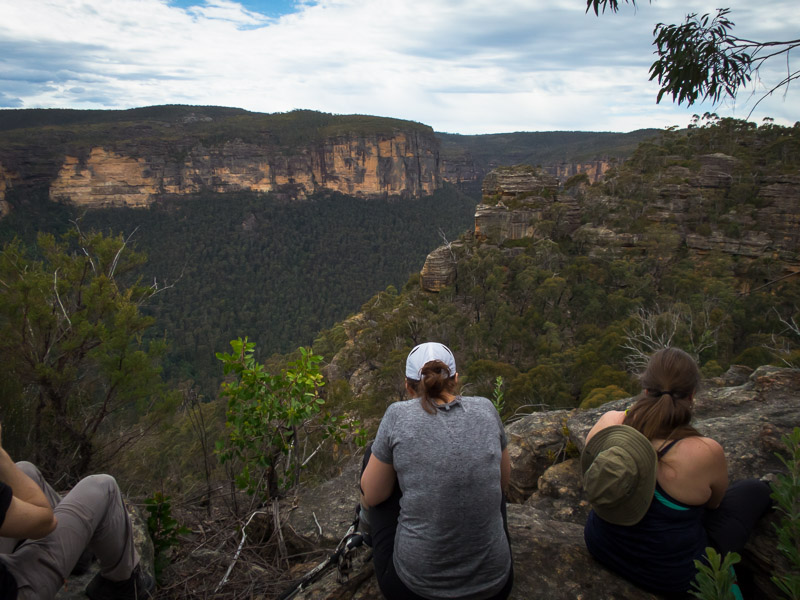 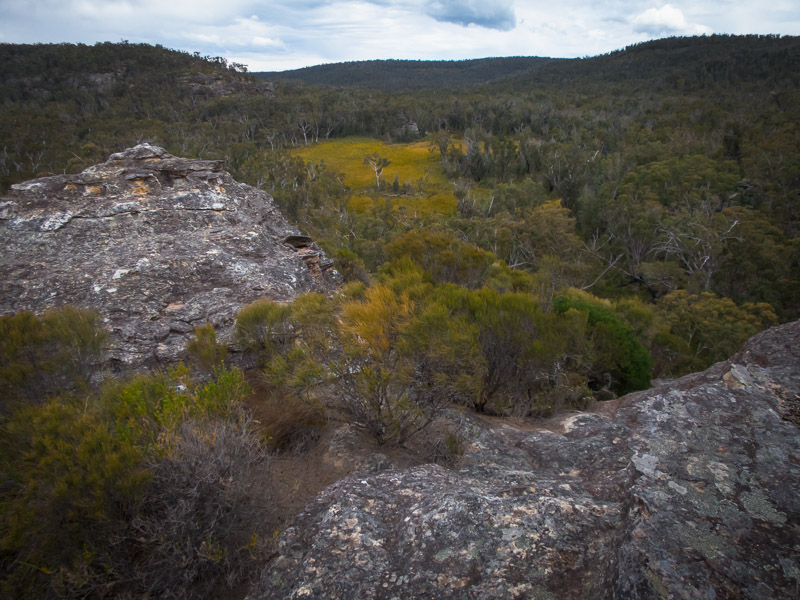 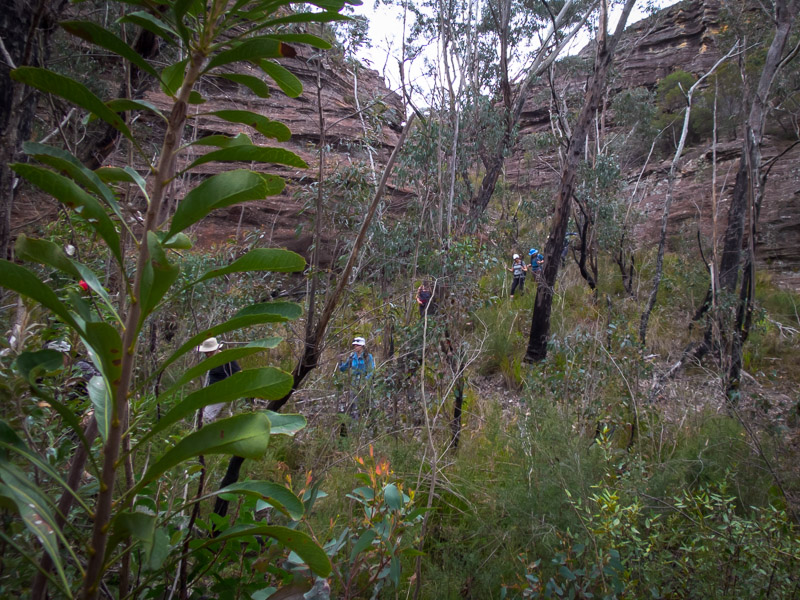 on the way between Valhalla and Thor Head 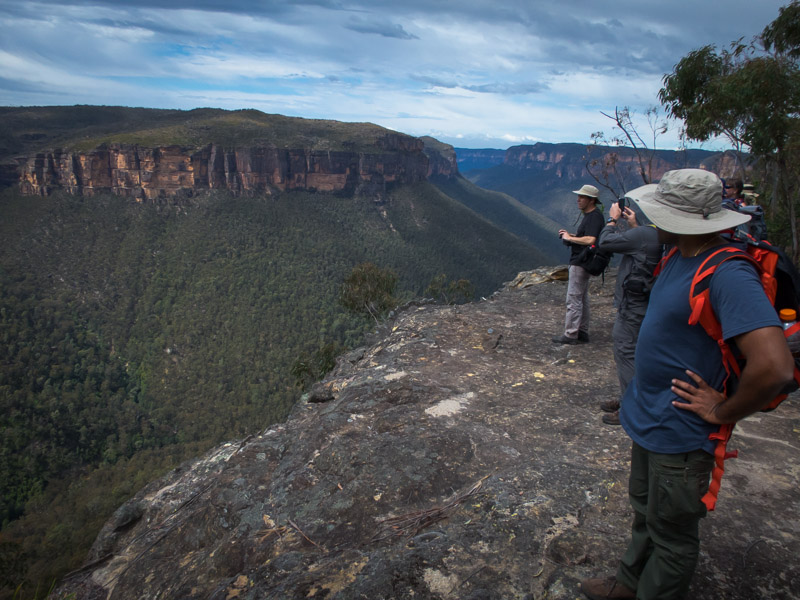 Awesome lookout on the way to Thor Head 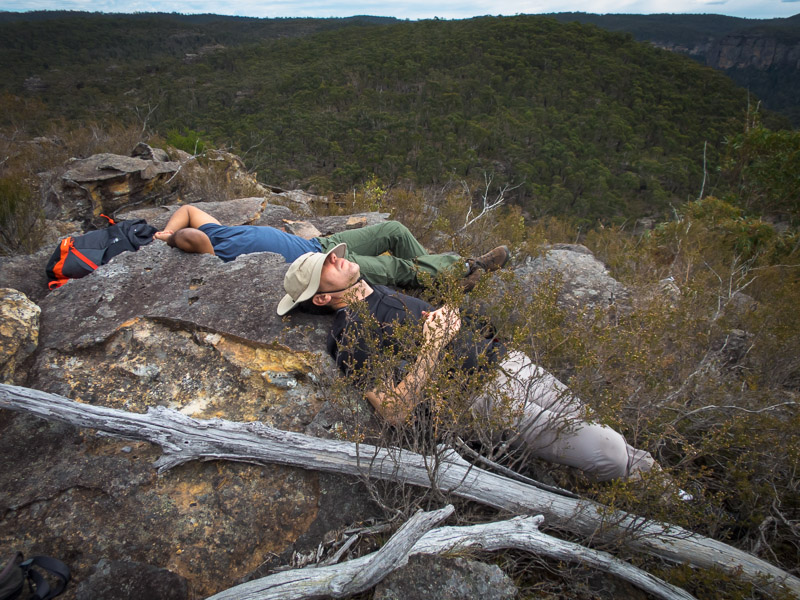 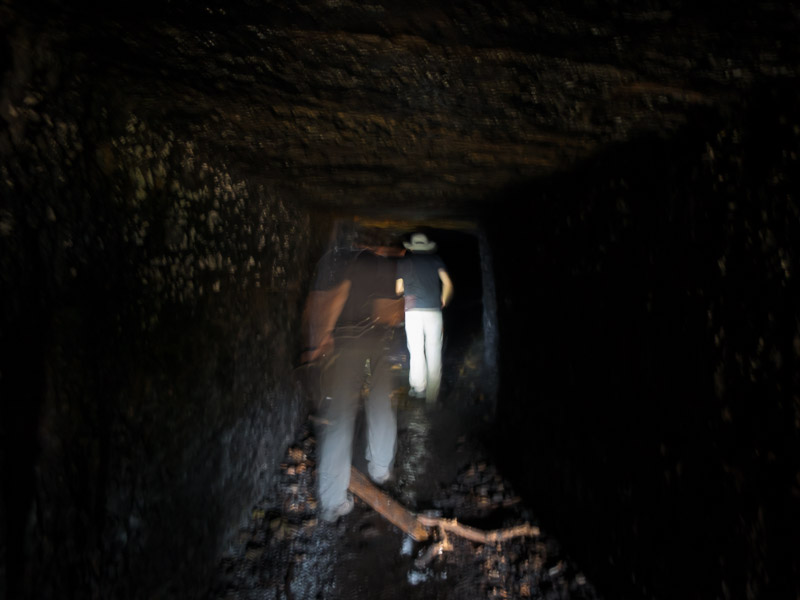 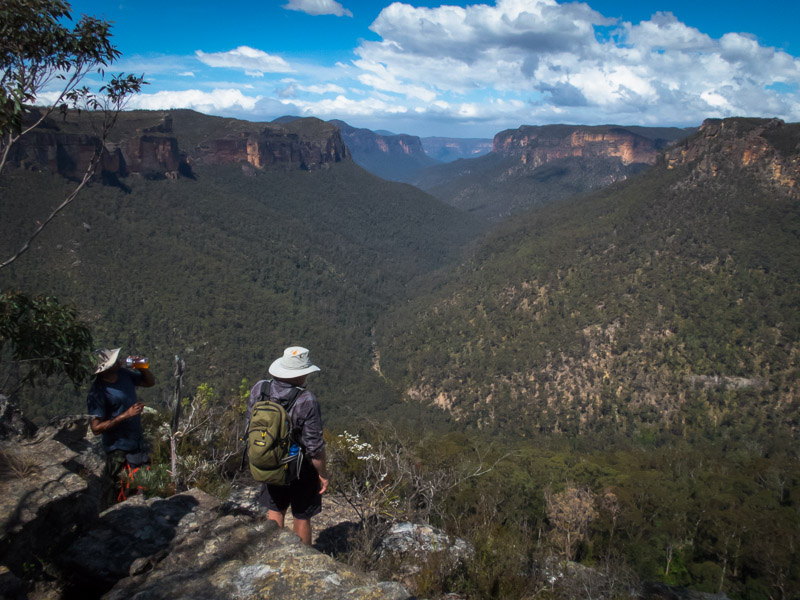 Views on the way to Asgard Head 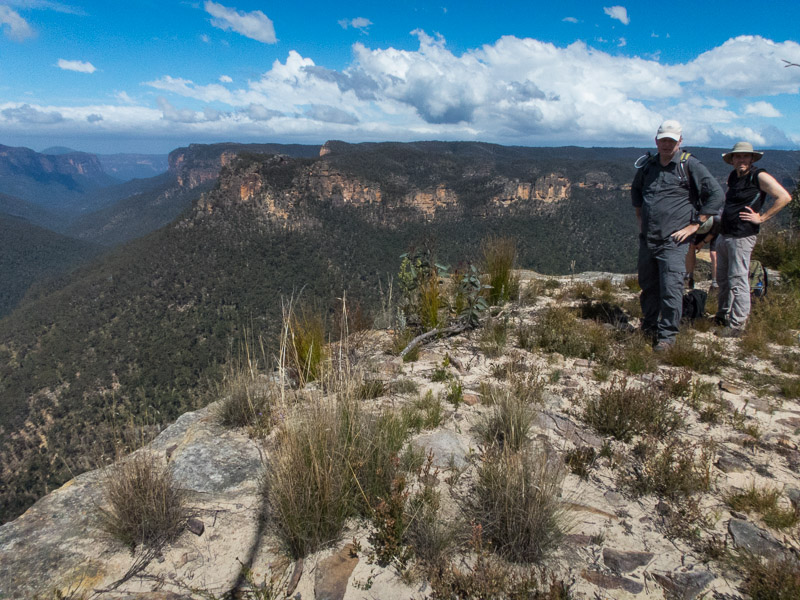 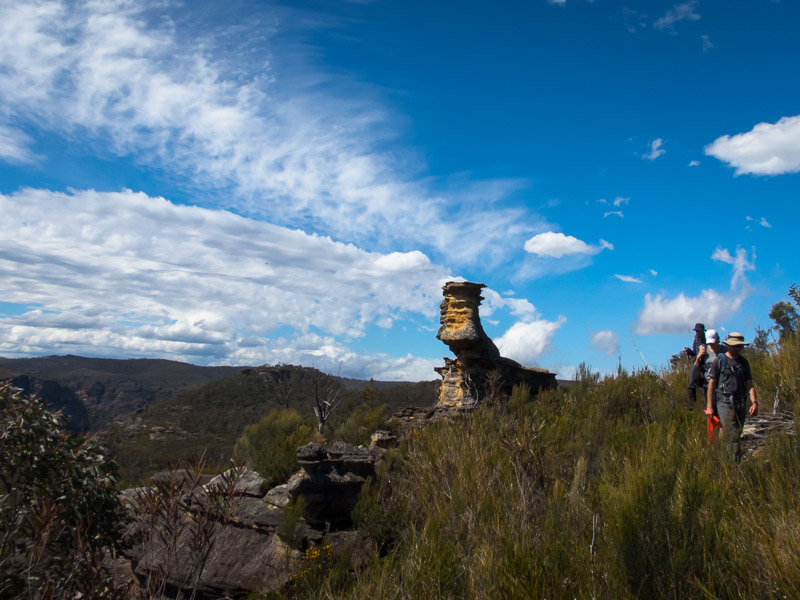 rock formation on our way down

After deciding to put the Four Heads on the program I wanted to run another trip nearby on the Sunday. After scouring the map and having a look at some of the trips in Micheal Keats & Brian Fox’s Upper Grose Valley book I decided the weekend would only be complete with a visit to Odin Head (the fifth head) on the Sunday. Odin Head can be accessed by an easy, relatively flat walk along an old fire trail and would likely be less than an hour and a half return. I needed something more! Instead I decided to descend into Victoria Brook and follow that to Victoria Creek before ultimately ascending the cliffs below Odin Head. Perhaps unsurprisingly I had a lot less interest in my Sunday walk, perhaps because of the 3 for Terrain in the grade (for the non-SBW readers that means “Sections of rough track and/or off track and/or creek crossing and/or rock scrambling for long periods and/or thick scrub“).

In the end we had 6 starters for Sunday. After a brief jaunt along the road we soon plunged off track and down into Victoria Brook. 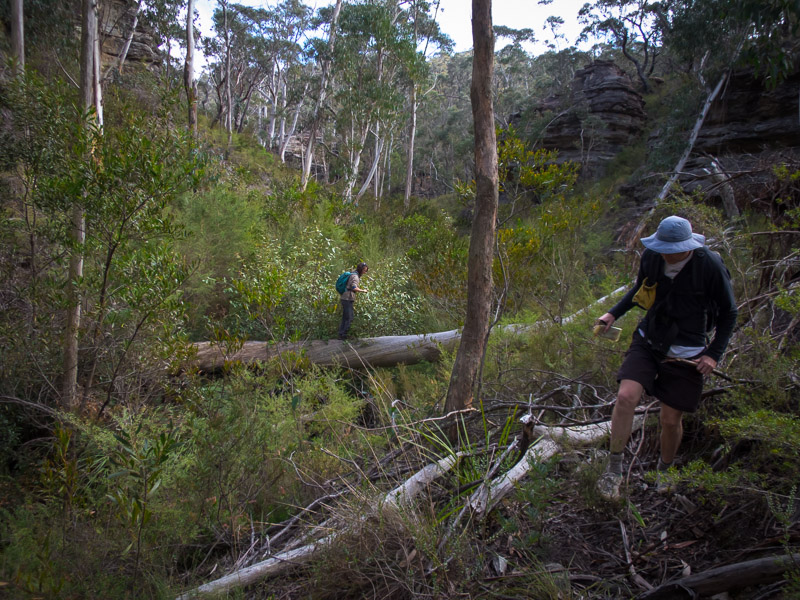 It wasn’t long before we gave up on keeping our feet dry. At one point Tom declared the water was only up to mid-thigh, unfortunately for most of the party this meant closer to waist deep. In a couple of places we elected to go up and around rather than go through where the water was deeper – sadly this meant missing the most canyon-like sections. 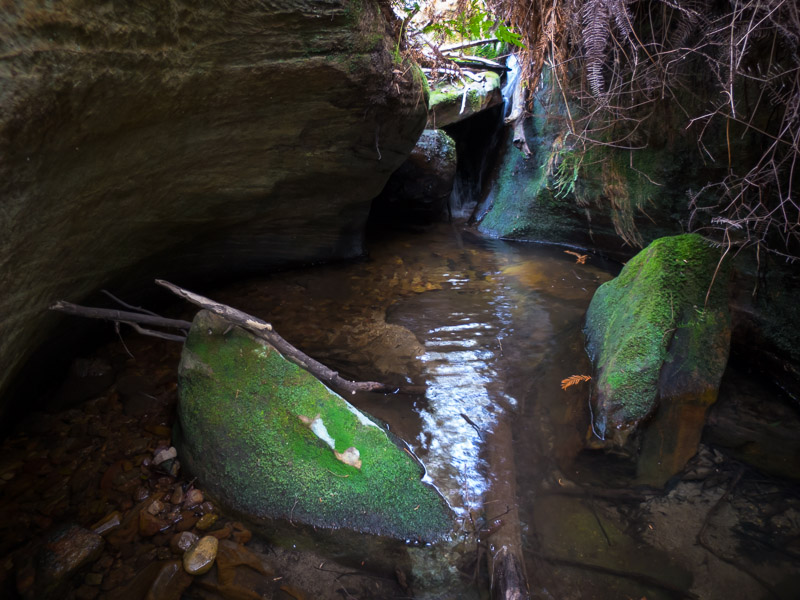 A small canyon section which we went around as the next section involved a deep pool. 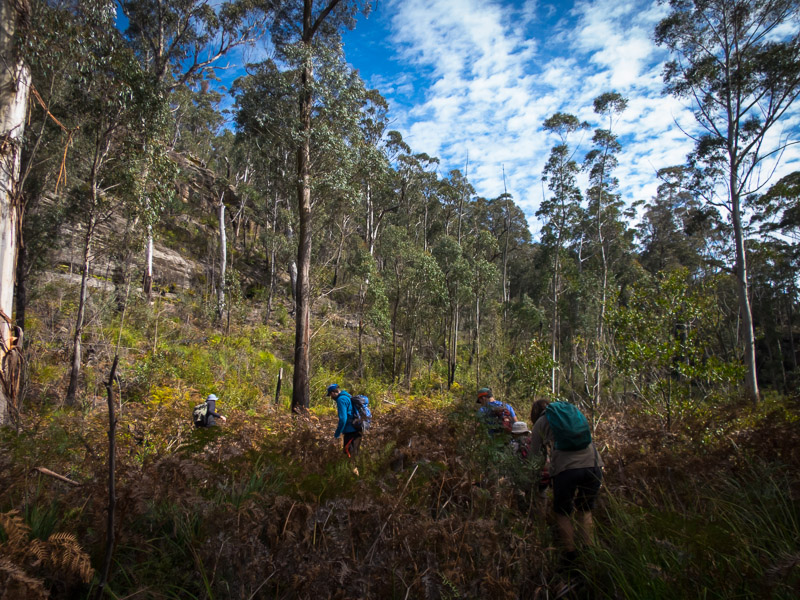 An open section of Victoria Brook 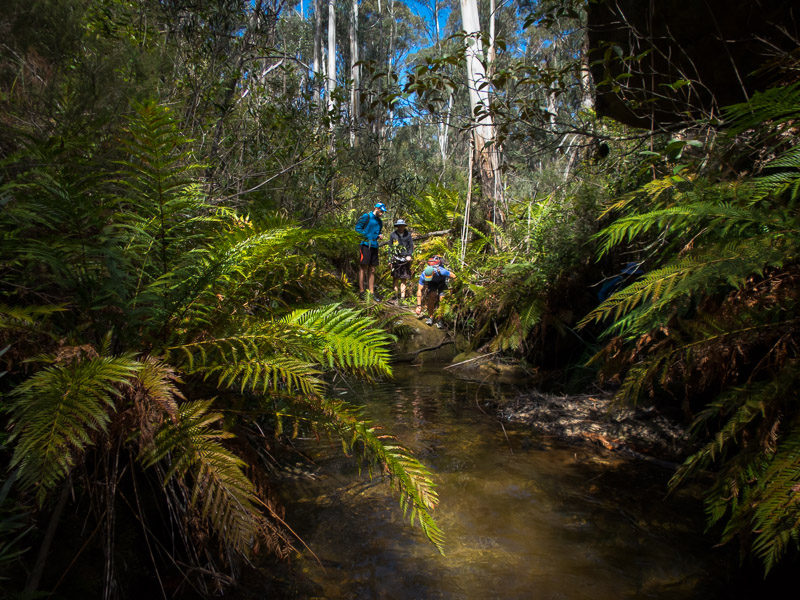 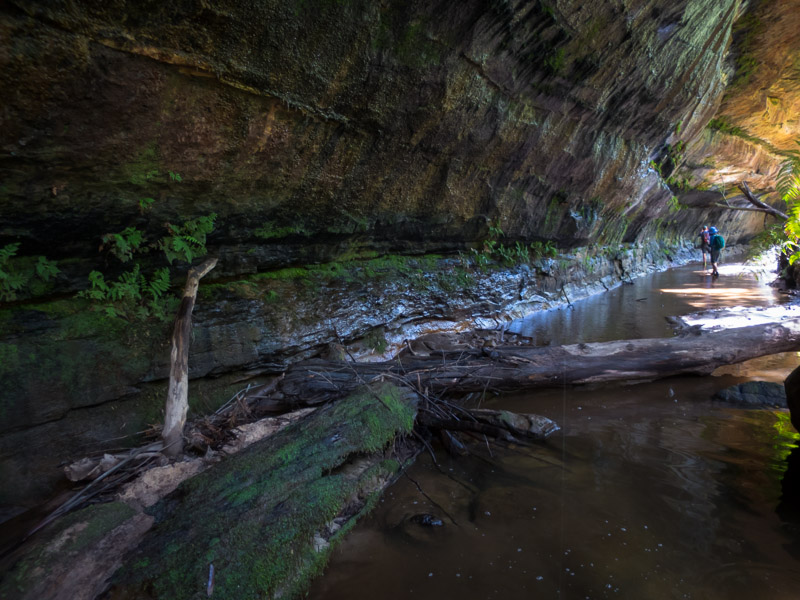 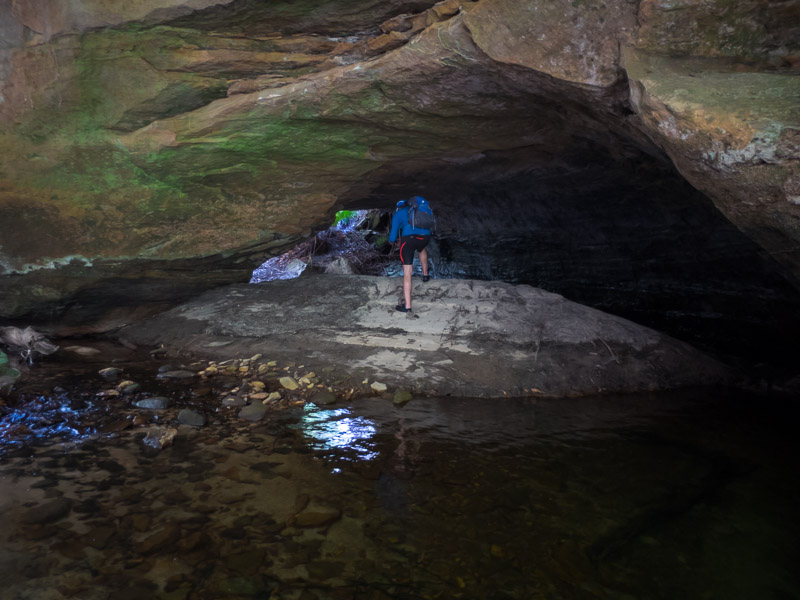 Adrian checking out the arch in Victoria Brook 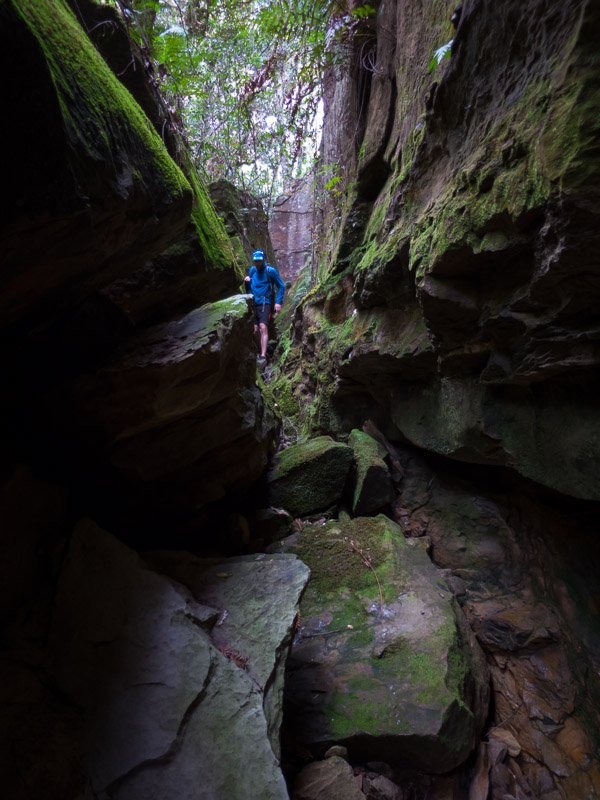 Adrian in a canyon-like section of Victoria Brook 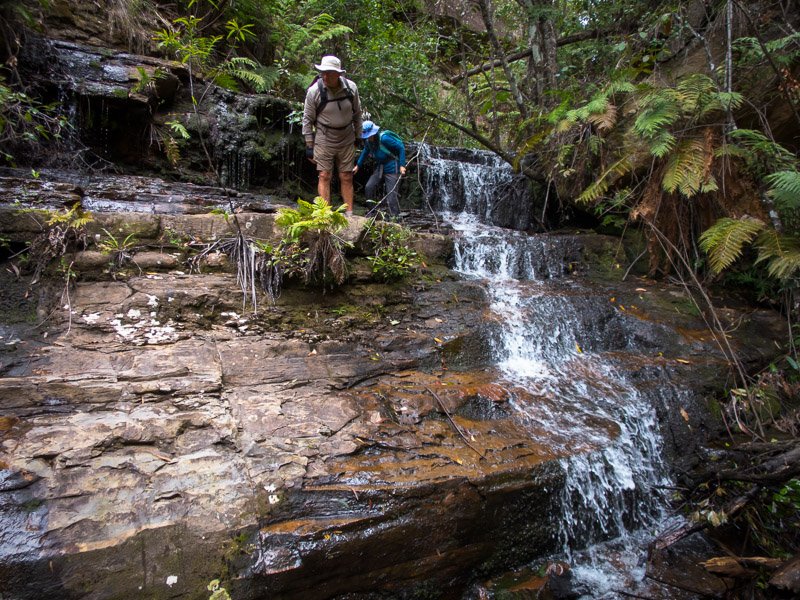 Petros checking out the best way down a very slippery waterfall 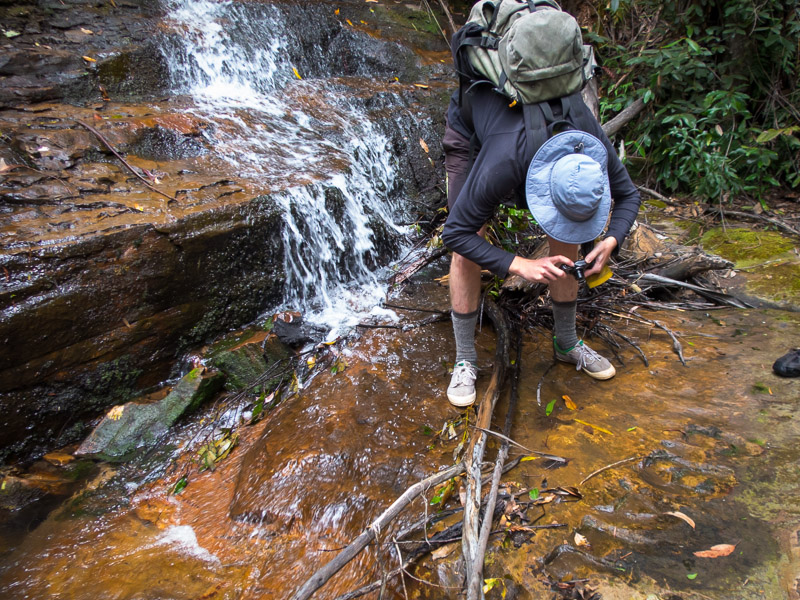 Progress was fairly slow and we had a late lunch a few hundred metres before we hit the junction with Victoria Creek. The original plan had been to continue down Victoria Creek for another km or two but in the interests of time we decided to try our luck getting through the cliff line above the junction. The climb up to the cliff line was straightforward but the traverse along until we found a break was less pleasant. Fortunately we managed to make it up a steep muddy pass and soon were on the ridge having a mandatory shoe clean out. 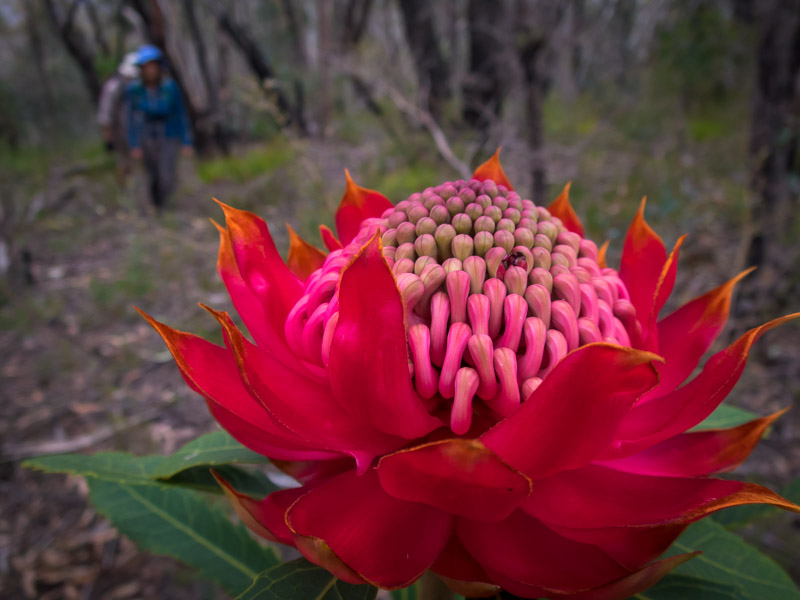 Lots of waratahs out on today’s walk as well

The party were suspicious about whether there was even going to be a lookout at Odin Head as I led them out on what was now an out and back instead of a glorious ascent at the head itself. I assured them that all information I had led me to believe there would be a lookout… but it was definitely a relief to get to the cliff edge and views of the Grose Valley. We spent a while enjoying the views before heading back along the old fire trails to the cars, getting back just after 5pm. A solid day in the bush. 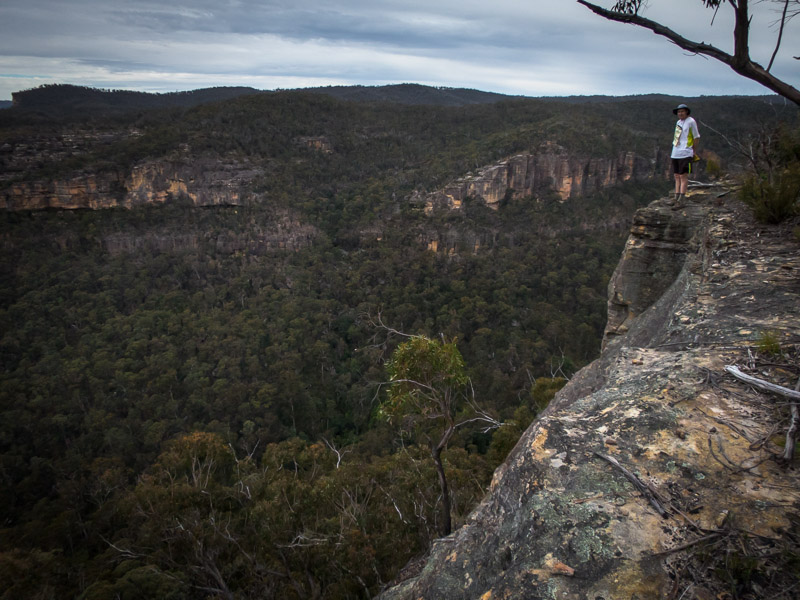 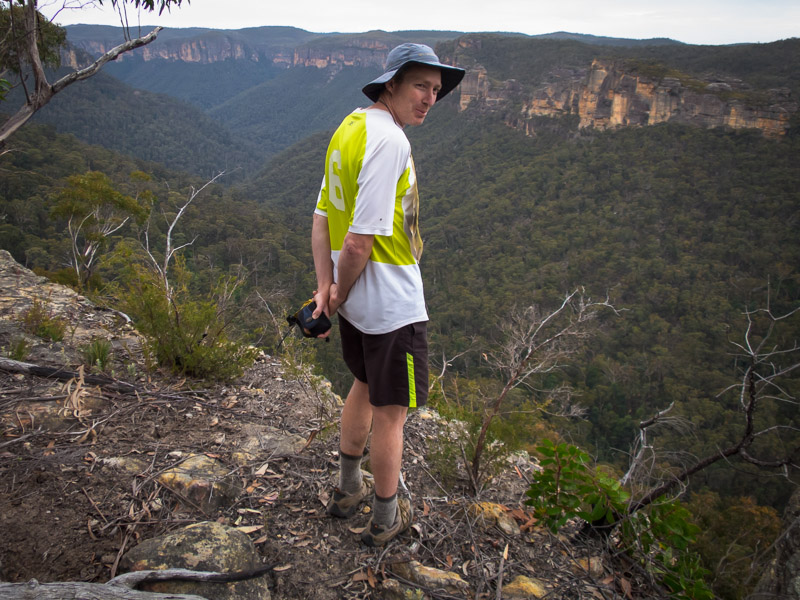 At Odin Head looking down the Grose Valley